There are many strong hints the runoff is winding down, just how quick that turns into strong cash prices remains to be seen. The rate of melt has slowed off of cooling weather, but mostly the damage of the exceptionally warm May has been done. The snow year is mostly over; most stations are now below normal: 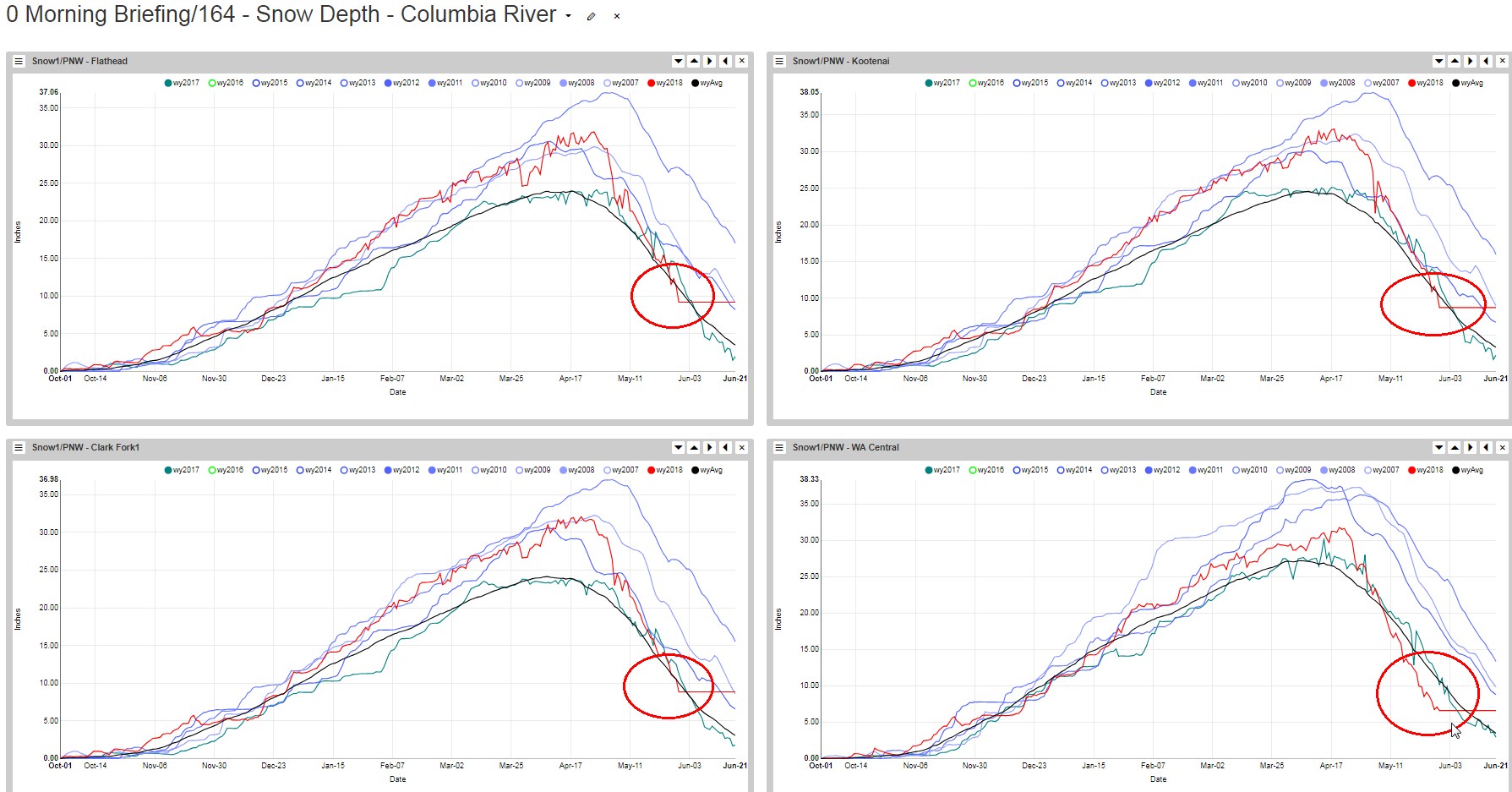 A month ago, WY18 was in the top 3 for depth at all four of these stations; today all four are below average. The end is imminent but don’t expect much reprieve for next week. 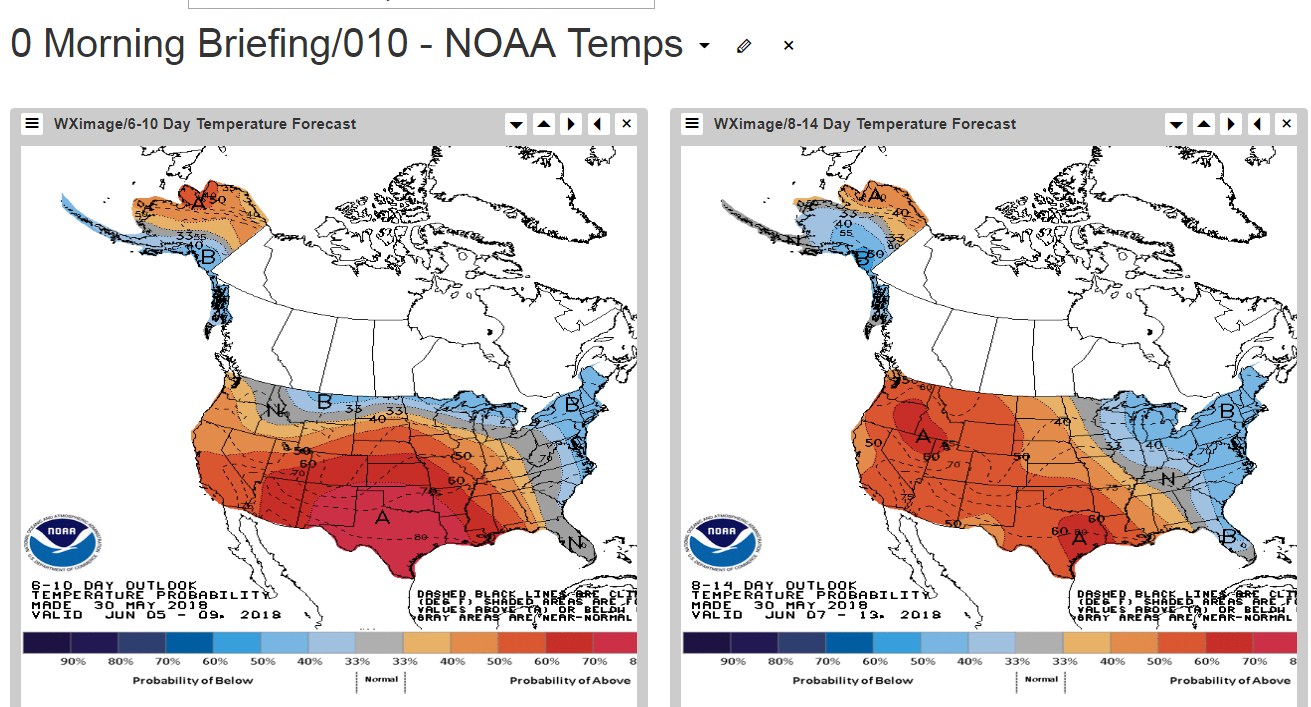 This is a warmer 8-14 day than earlier in the week, but it isn’t hot in the WECC; the coastal load centers will be mostly above normal but not by much.

Ansergy’s forecasts show rallies at all four WECC hub around mid-June. The MidC is showing ever more tightening which will make BPA’s job of  driving strong HL daily prices ever more easier. 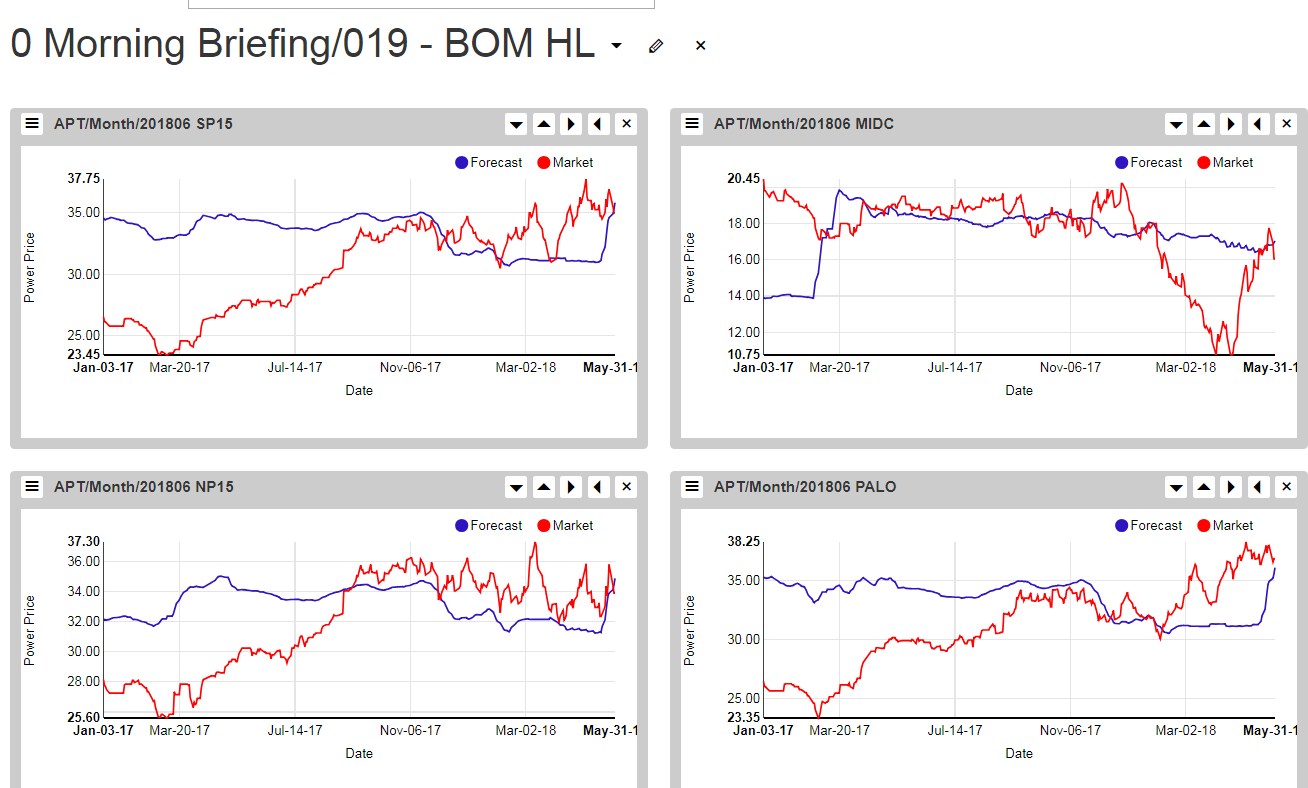 The recent rallies in term gas have driven up the forecasts for BOM, and most are now in sync with the markets. What isn’t in sync with those BOM term prices are the daily LMPs.

These end ofMay heat rates are crazy low (so are the prices); even crazier, NP’s LL was higher than its HL. Most On|Offs are just flat. The Delta between BOM and LMP is about $10.00, so something has to give. Either BOM comes off, or the LMPs need to rally. We don’t see the latter happening for a few days so I’d guess BOM slides. 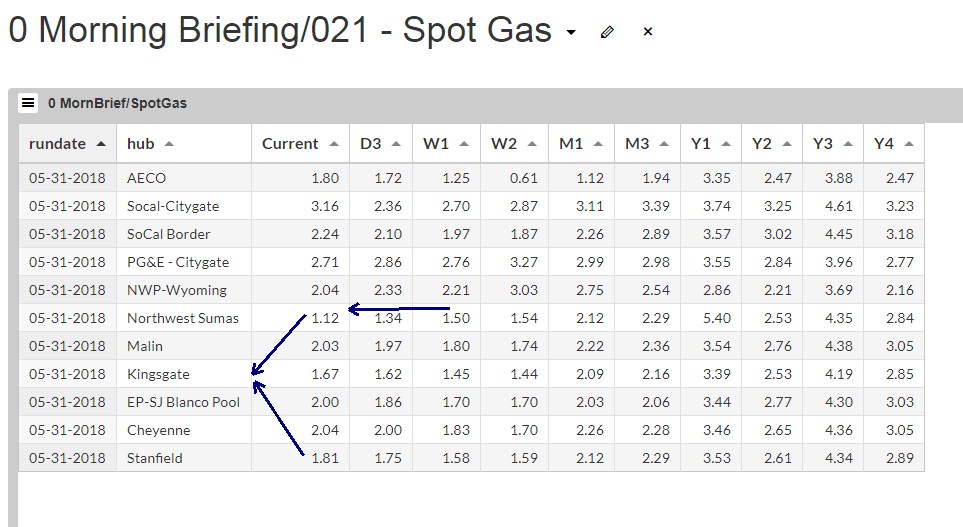 The dump at Sumas surprised us; none of the other hubs collapsed and look at the Sumas|Stanfield spread; typically we’d see a few cents, now the cash spread clears $0.70? 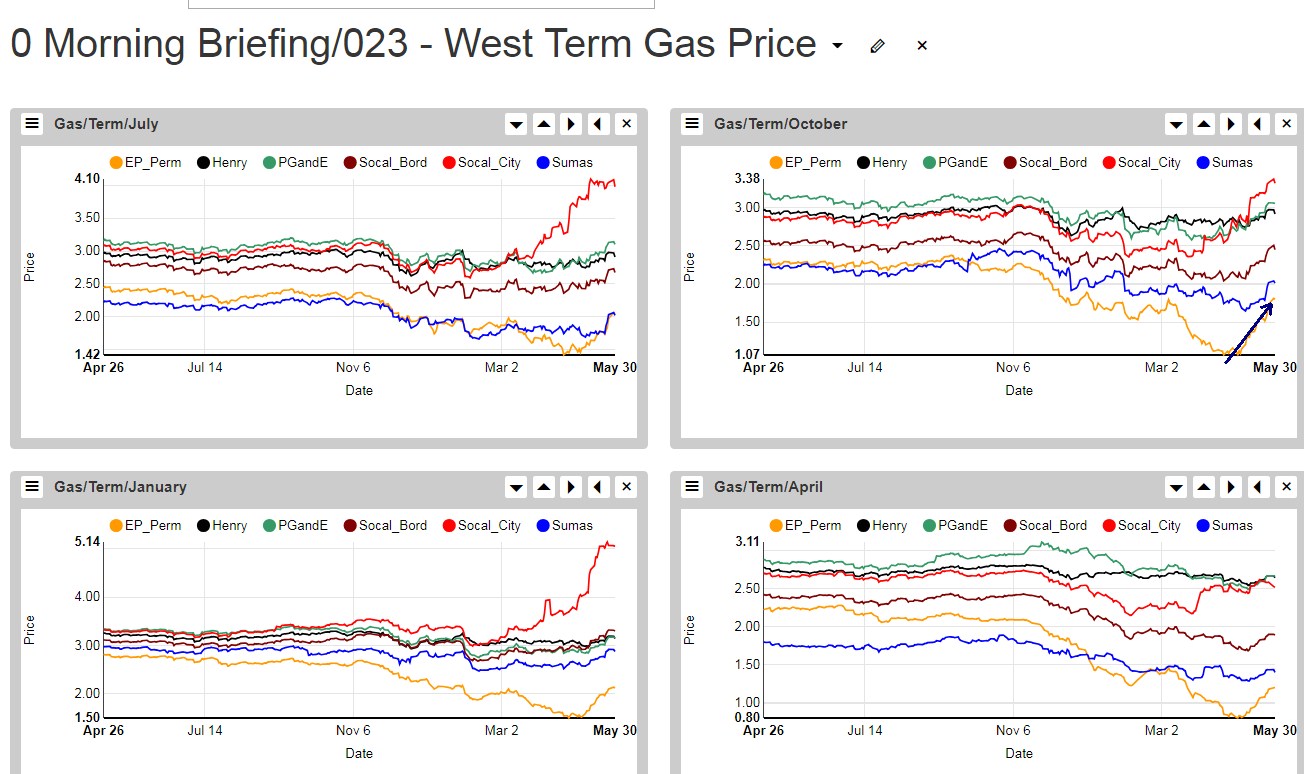 Meanwhile, Socal Citygate posts a modest rally all the way up to $3.16 – wow! But not so wow when you compare spot to July which is mired around $4.15. Something gotta give there, too and we doubt it is the spot.

Socal the Gas Ute is injecting at a rapid pace; it dropped over a BCF into storage last week. Every B makes those stupid summer premiums look even dumber. Gas shortage in July? Hah.

Even the winter SCG premiums are looking vulnerable to reality:

November realized the most significant clawback since March. 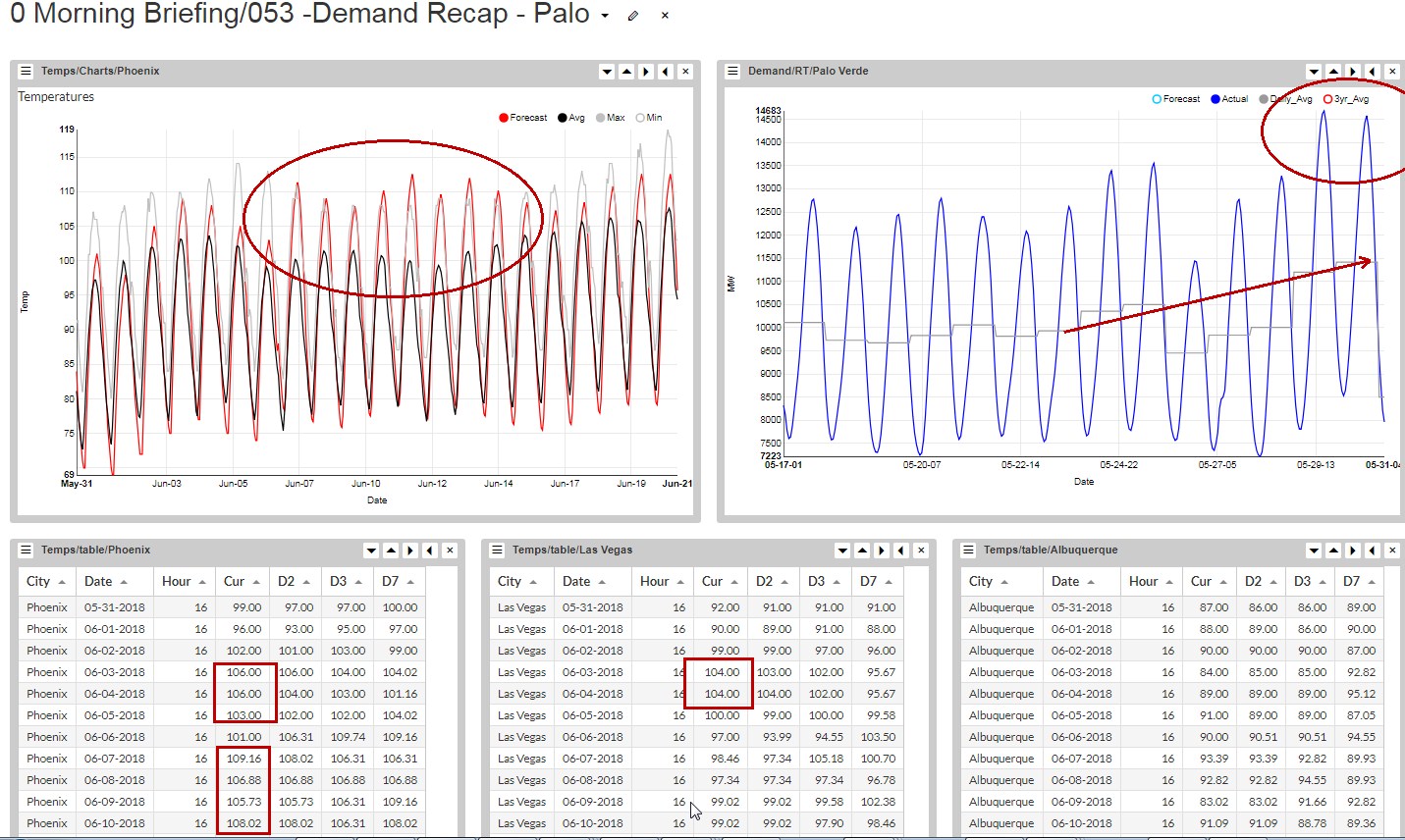 Palo realized two of its most robust demand days Tuesday and Wednesday. There is more of that coming; Phoenix is poised to accomplish a string of 100+ days next week; the 8-20 day outlook is even hotter, though we place low confidence on forecasts that far out. 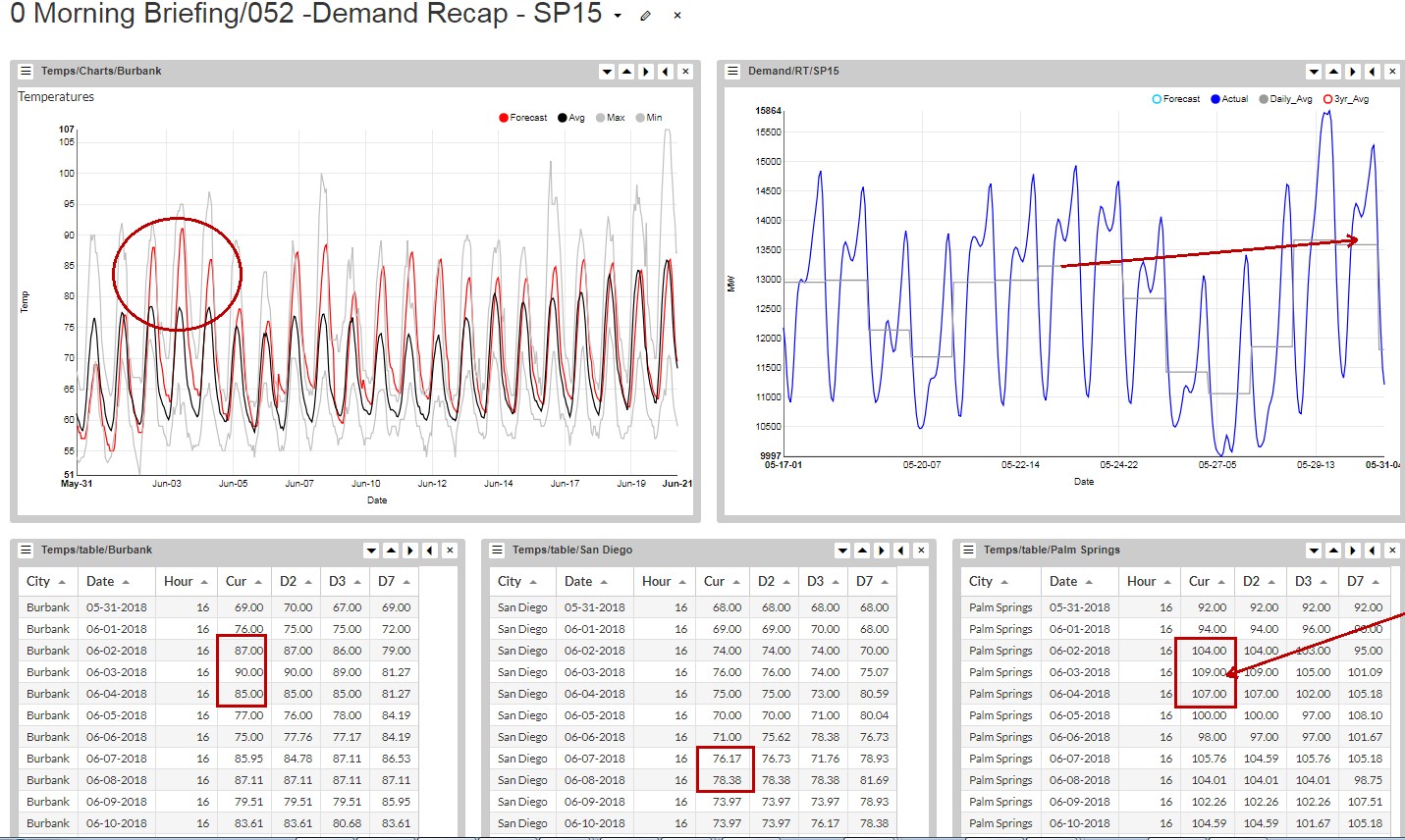 Burbank, our proxy for LA, has a mini-heatwave over the weekend then slip slides back to more normal than not. This isn’t the kind of heat that will support $35.00 BOM prices, not when the NP is mild, too. 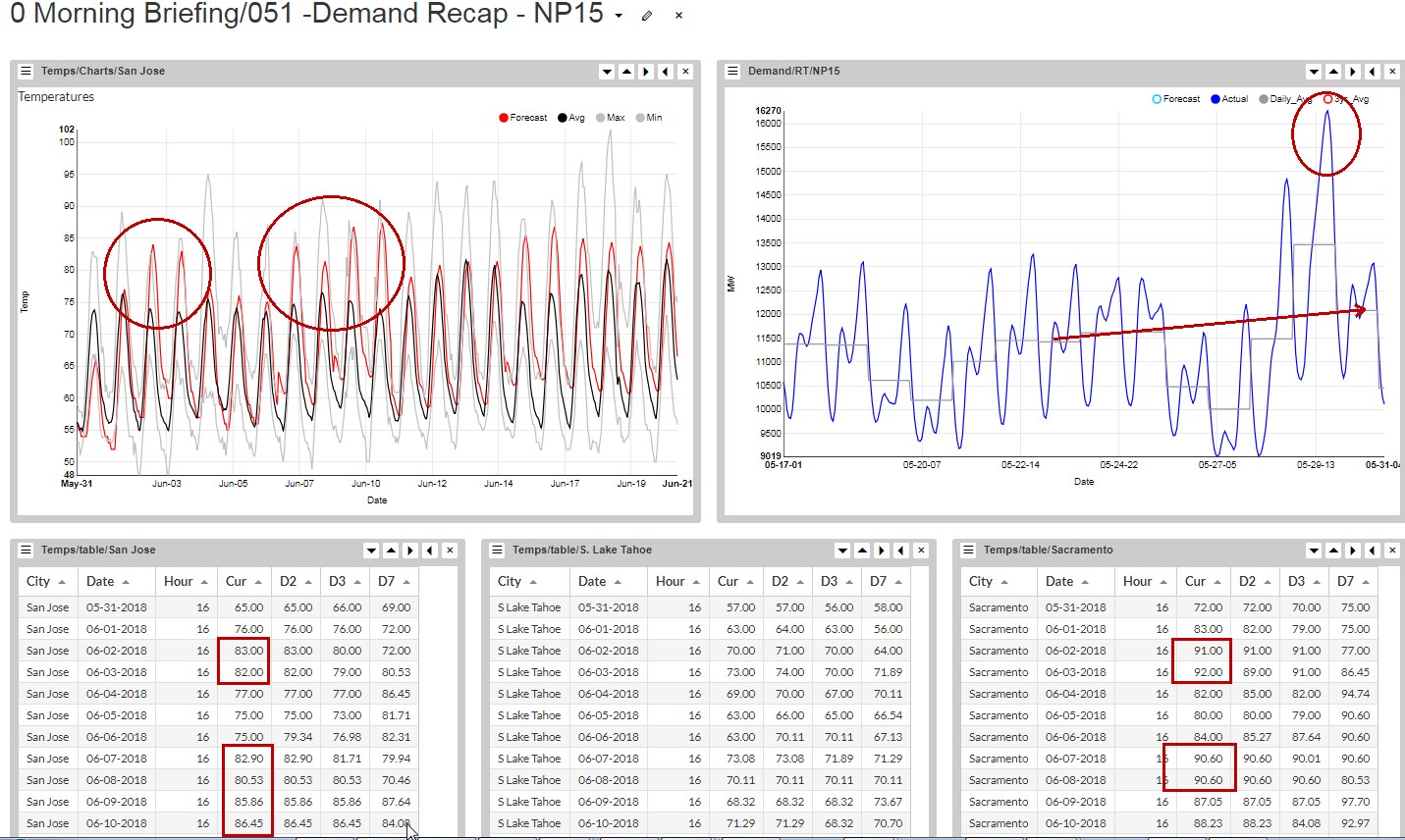 The hub, NP15, saw some significant demand on Tuesday but was short-lived. There is mild heat in store, but just low 80s in San Jose. Again, not hot enough to drive LMPs to the mid-30s, in our opinion. 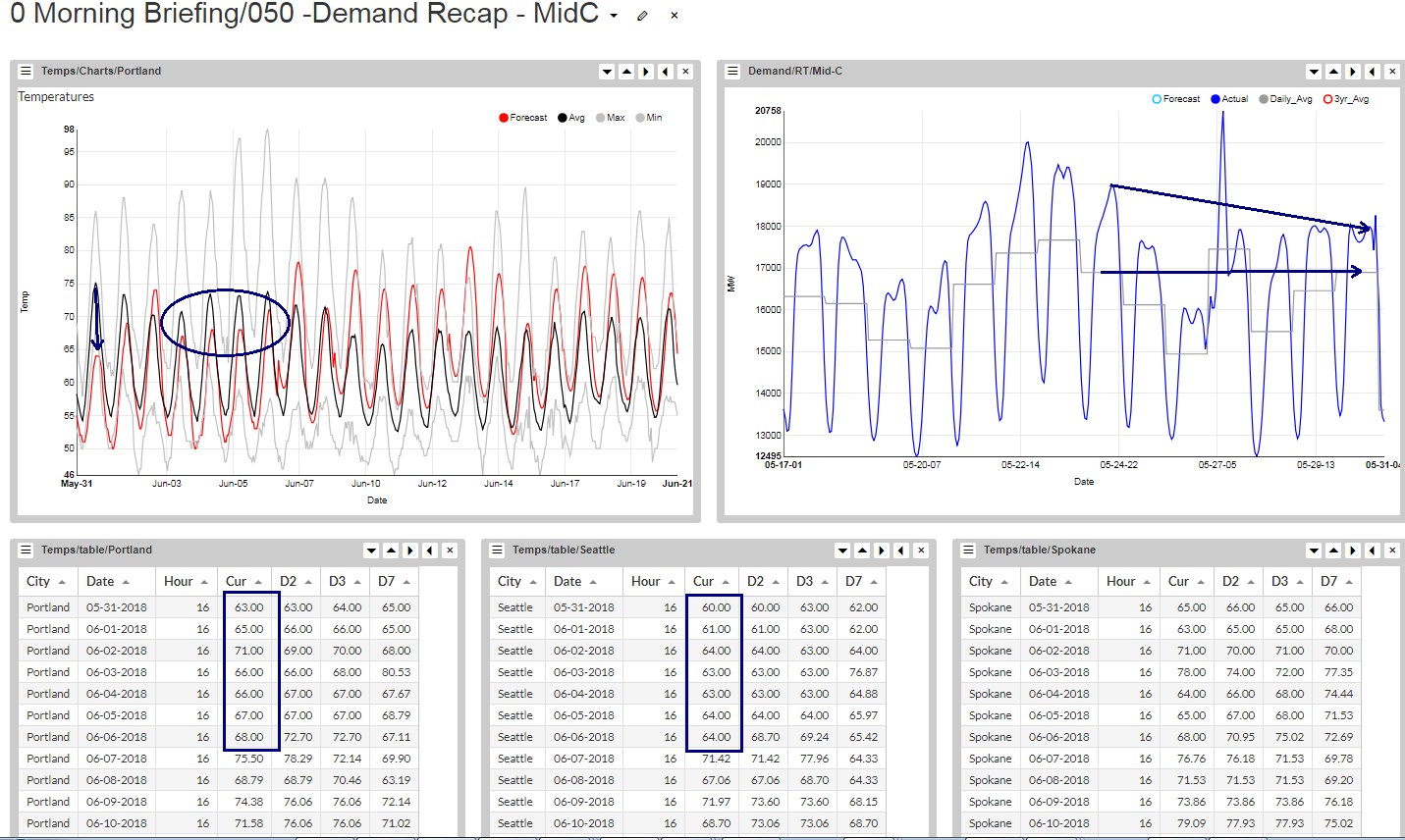 The Northwest has entered a min-ice age; Seattle temperatures are projected in the mid to low 60s for a week or more. MidC’s only prayer is the water quits flowing downhill, but we don’t see those physics in the current forecast. 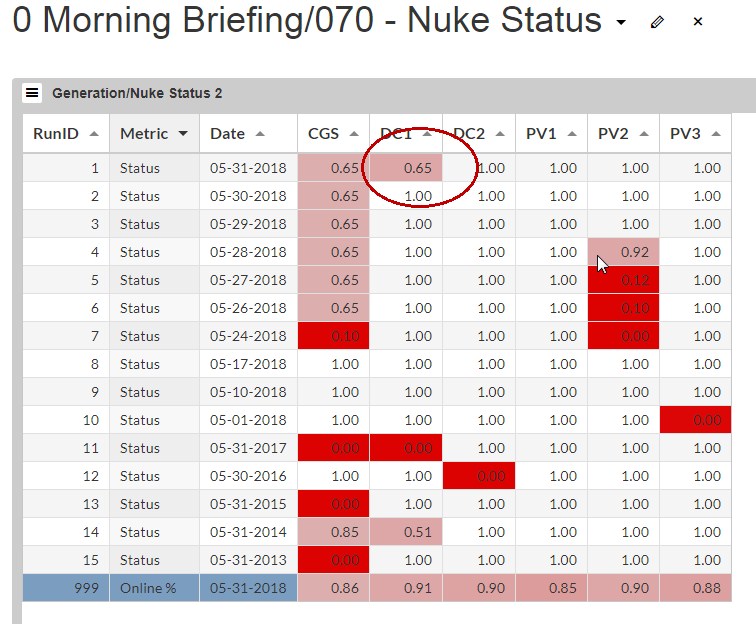 The MIdC’s nuke, Columbia Gen Station, remains economically backed down to 65%. Another nuke, Diablo #1 is also at 65%, and we’re not sure what’s going on there. 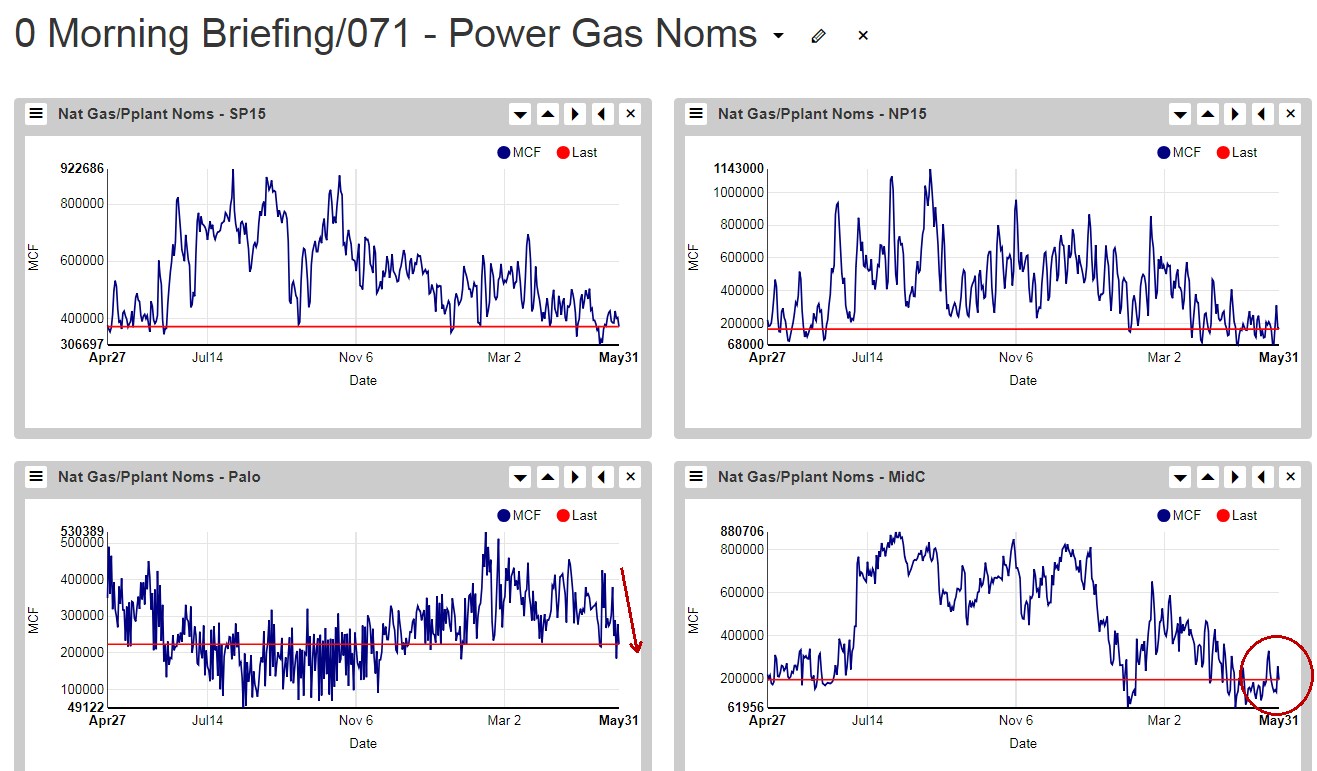 Palo gas noms are sharply off while the MidC’s staged a mini-rally: 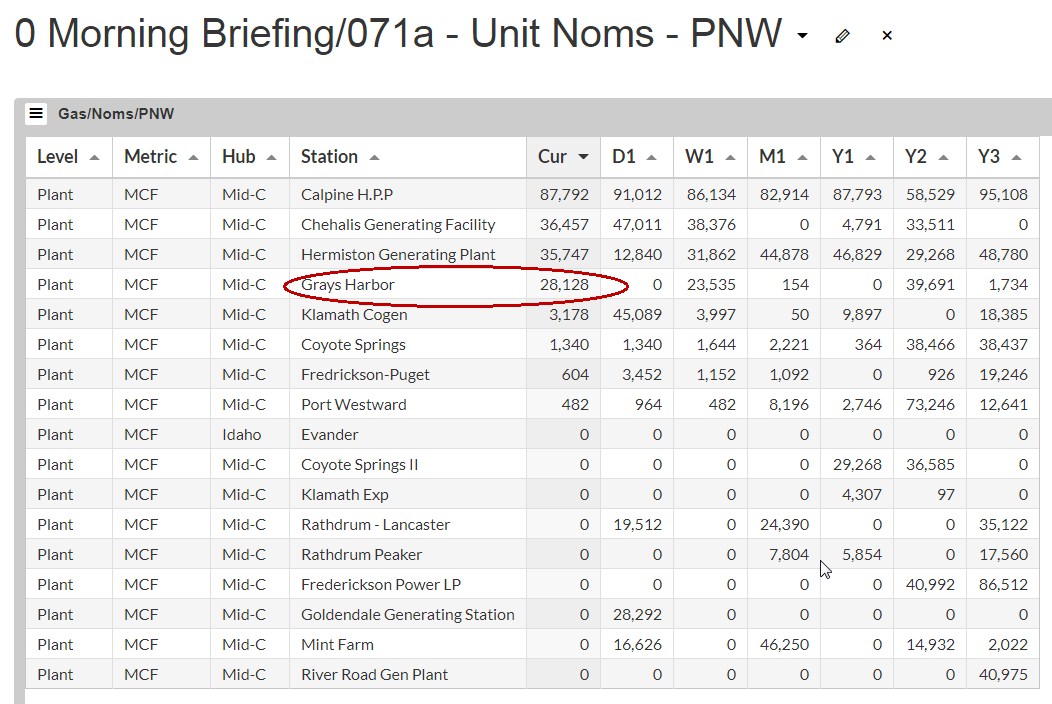 Well, Grays Harbor fired up one of its CTs but interesting that they would be running it – maybe just testing?

Nothing crazy in renewables, overall the ISO wind energy is off from last week, and the MIdC’s remains spotty. 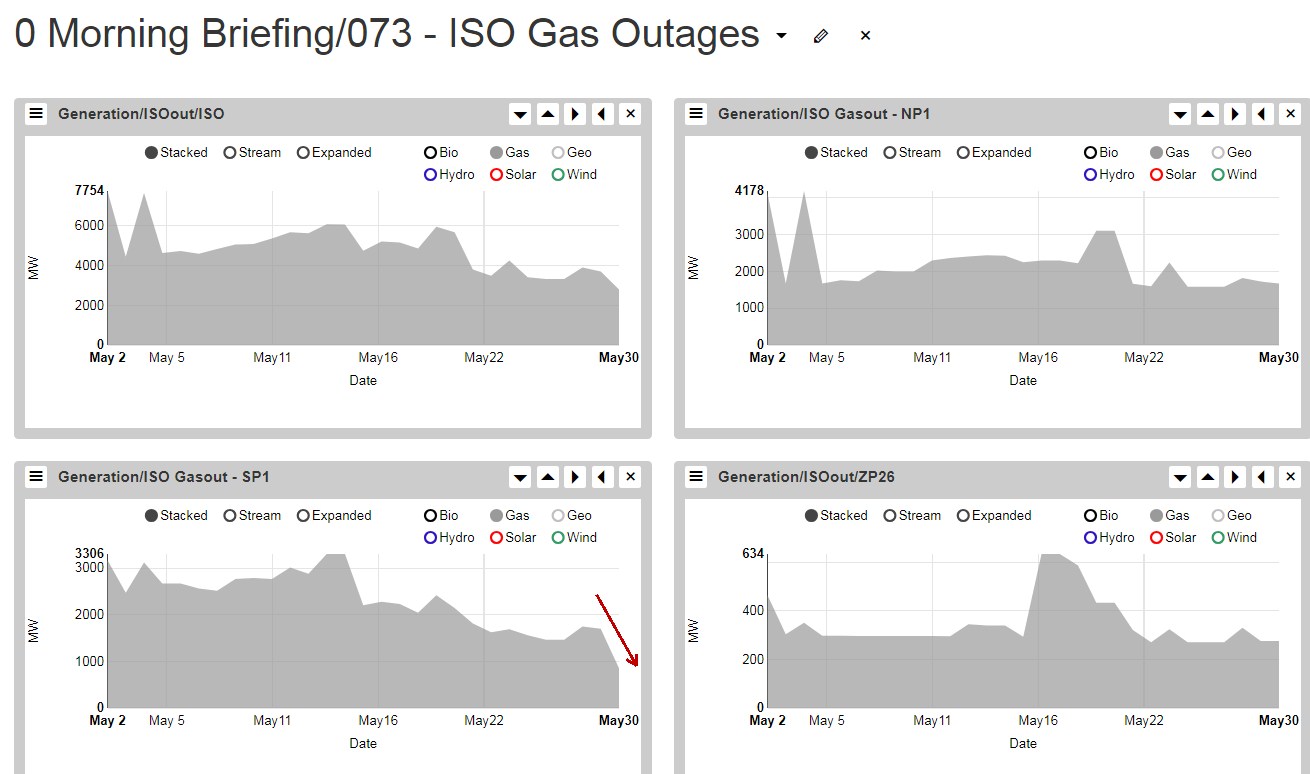 SP15 saw its total gas outages fall with the return of High Desert: 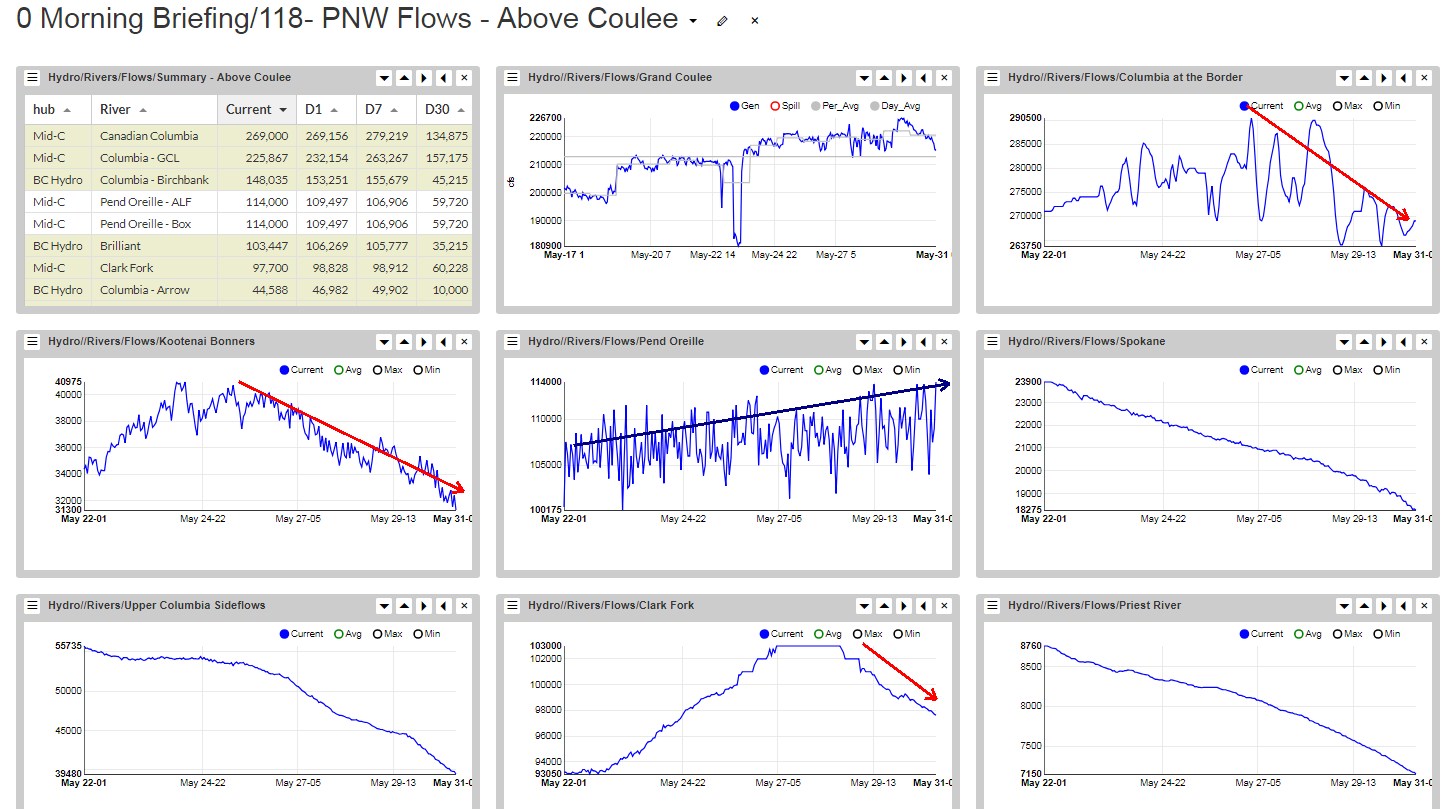 Runoff has crested, now the Clark Fork is finally backing down, yet the Pend Oreille is flowing 110 kcfs. Still, all of the streams are backing down; it just remains to be seen how fast they fall.

Ignore those Arrow cuts; those are BPA treaty-driven. Some of the smaller streams in BC are coming off, but those look more like USA Northwest rivers than not. Mica looks as if it crested and flows out of Brilliant are coming off. 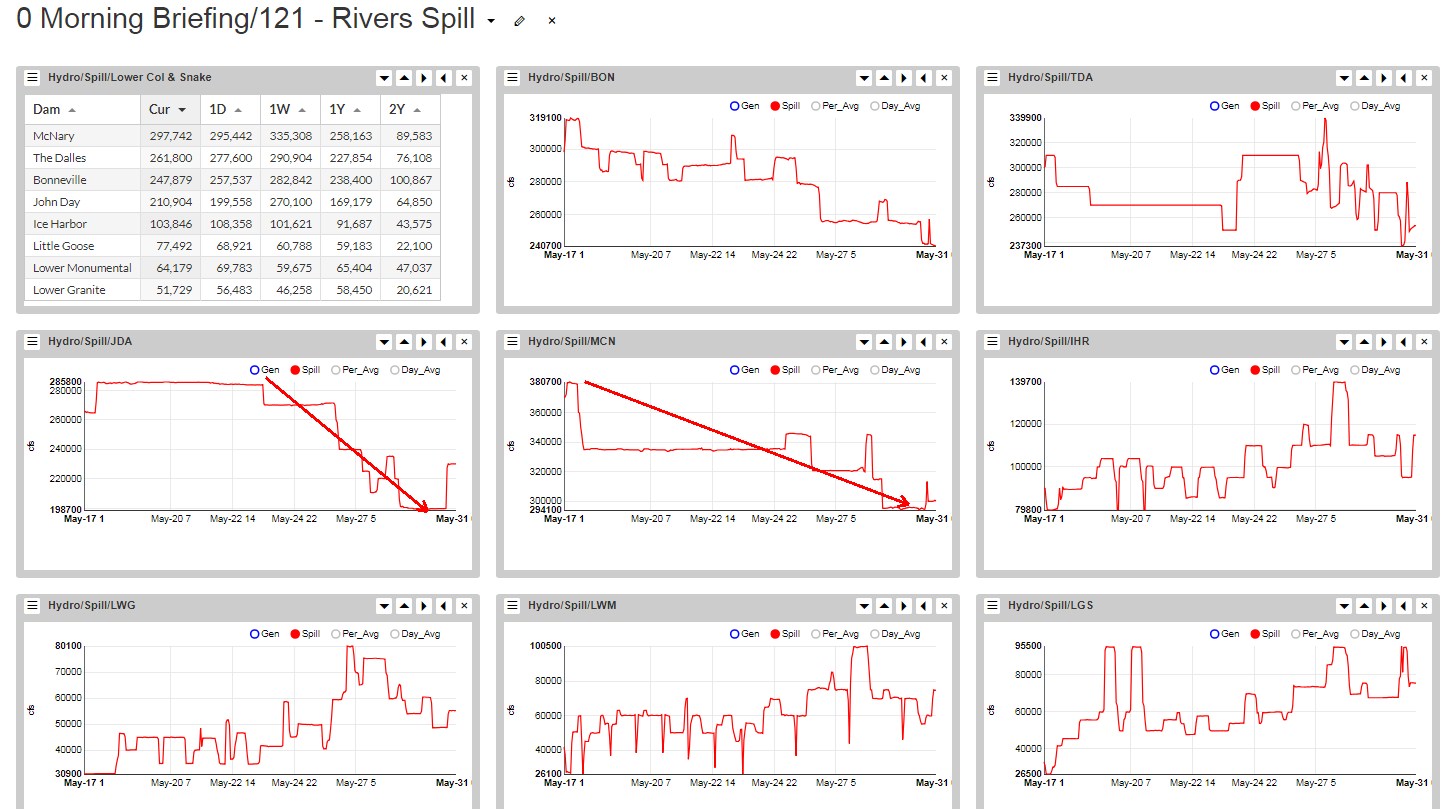 We don’t bother looking at “QG” on the mainstem, Spill is a better indicator of total volume and notes the 100kcfs cuts in spill at McNary. 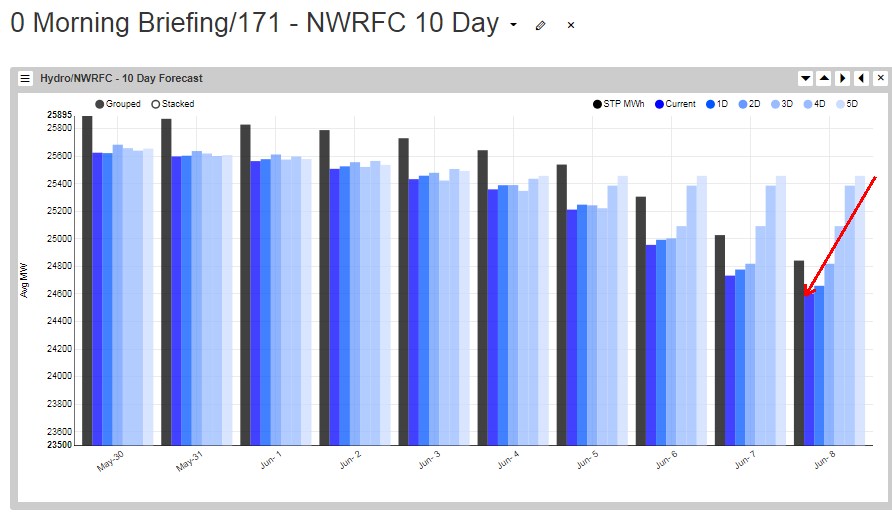 Another harbinger is the River Forecast Center’s 10 Day, and it is growing more bullish by the day. Check out the cuts in the last set of bars from the forecasts just five days ago.

Nothing of note to report in tranny flows aside from the fact that the NOB and COB are not full 100% of the hours while the MidC is amidst its near-peak runoff. Just goes to show how weak some ISO hours truly are.

It will be really bullish …someday. That day isn’t today or even next week, for any WECC hub. Palo is the closest thing to tight but the fact that all the rest of the WECC is so long dampens its potential to run. Besides, it just isn’t that hot in Phoenix. Remember last summer, if you got 105 it was bearish.

We think the Cash to BOM spreads are too wide and think the latter will tighten those up.