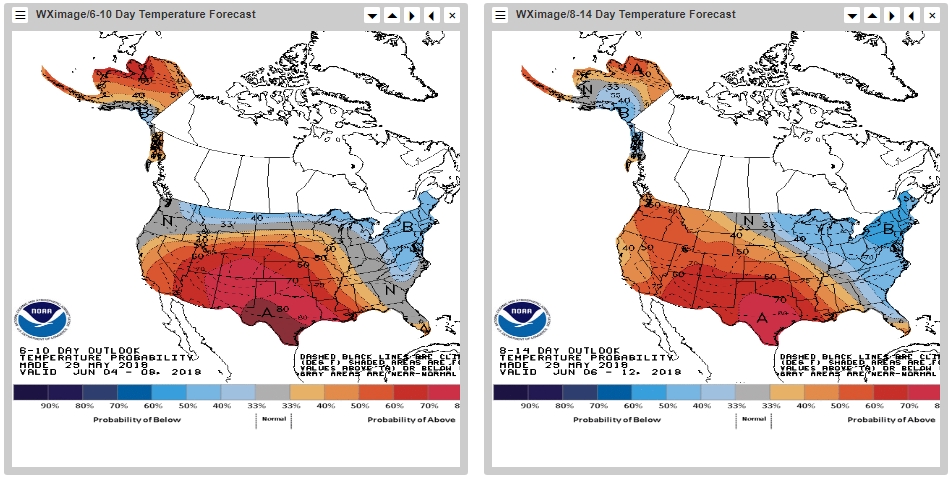 Temps are expected to stay slightly below normal for much of the interior Northwest over the first half of the next two weeks, while the Southwest and Southern California are projecting above-normal temps for both weeks. 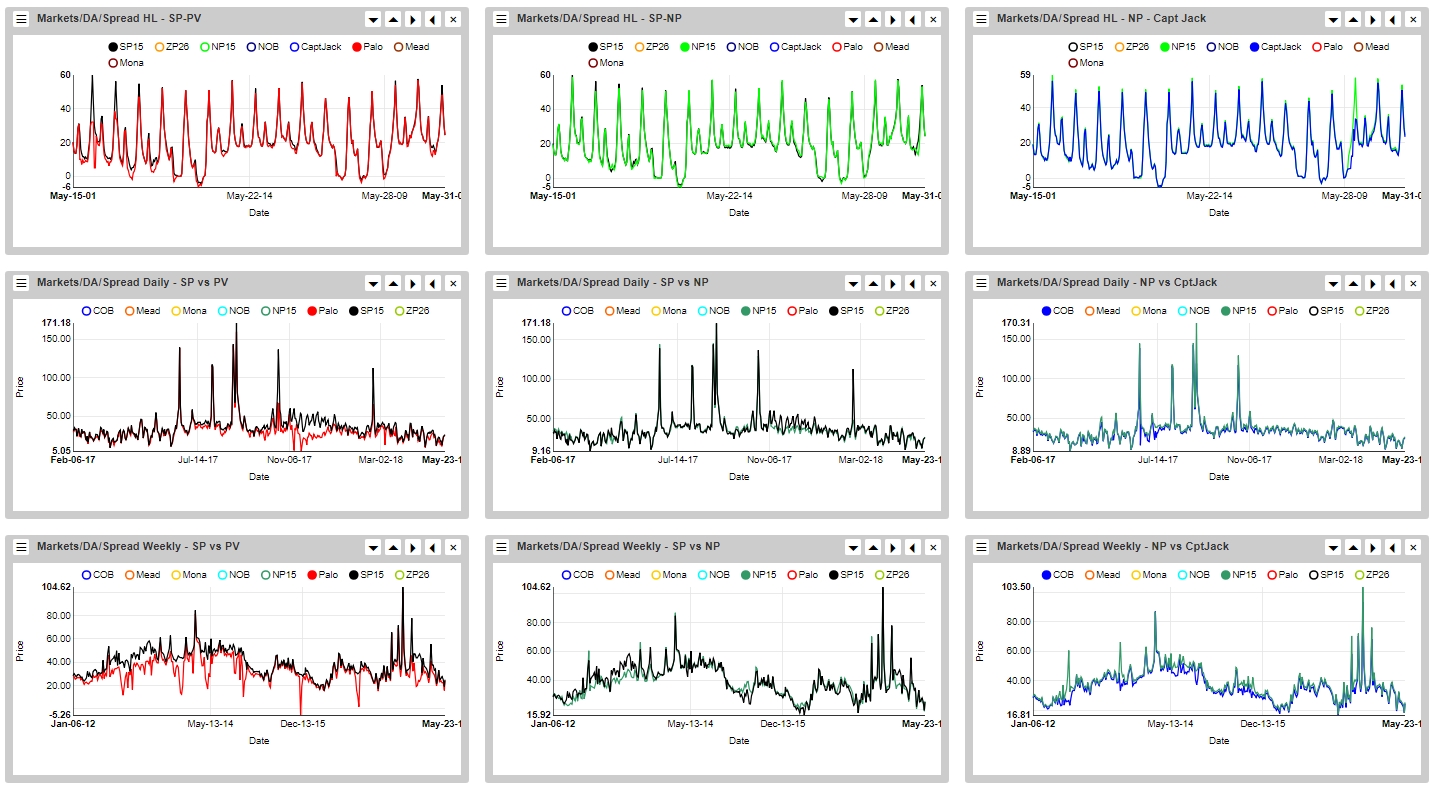 NP-Captain Jack is showing a $3 congestion during peak hours for the past couple days, but that expanded to $24 on the 28th.

Socal Citygate jumped $1.34 over the weekend after settling at $3.70.  AECO seems to have found its niche at $1.79 as the price has hovered in that region for the past week.

Crude bounced back heavily today after increasing just shy of $2.00 since late last night.  Gas is moving the opposite direction after shedding three cents (though it has since rebounded a penny). 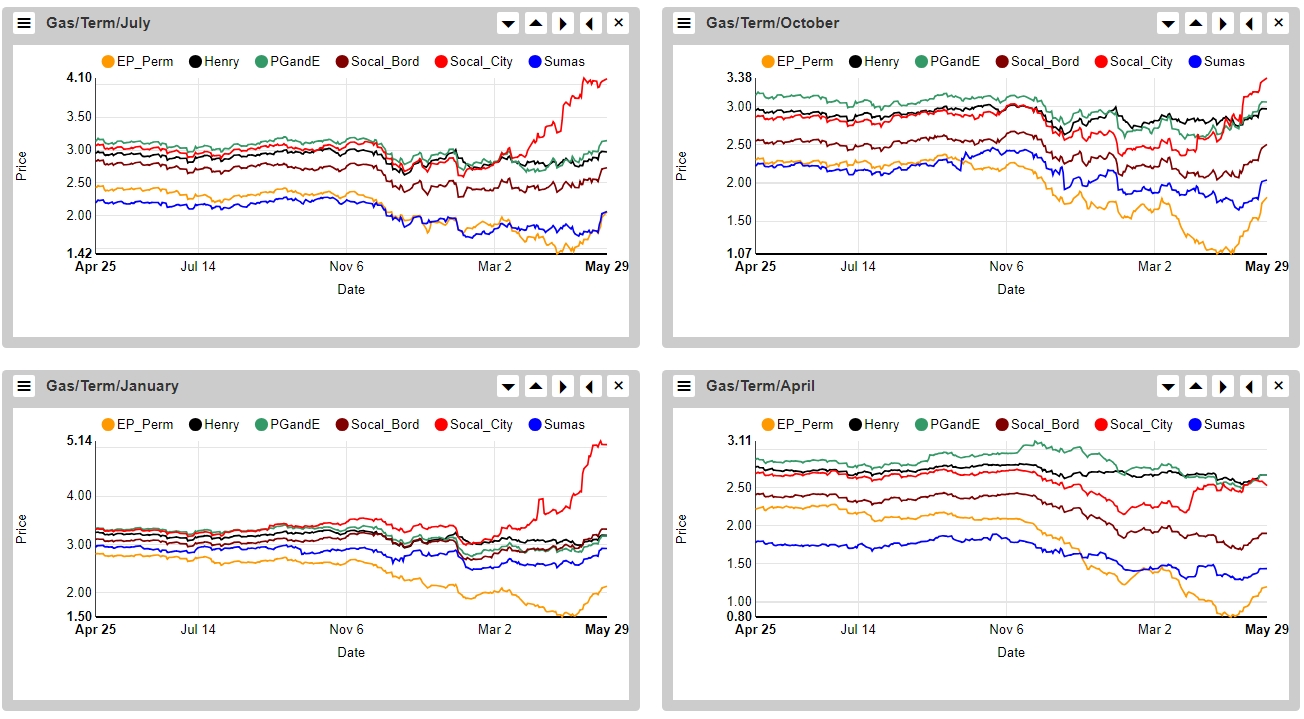 Socal City increased $0.05 over the weekend for October. 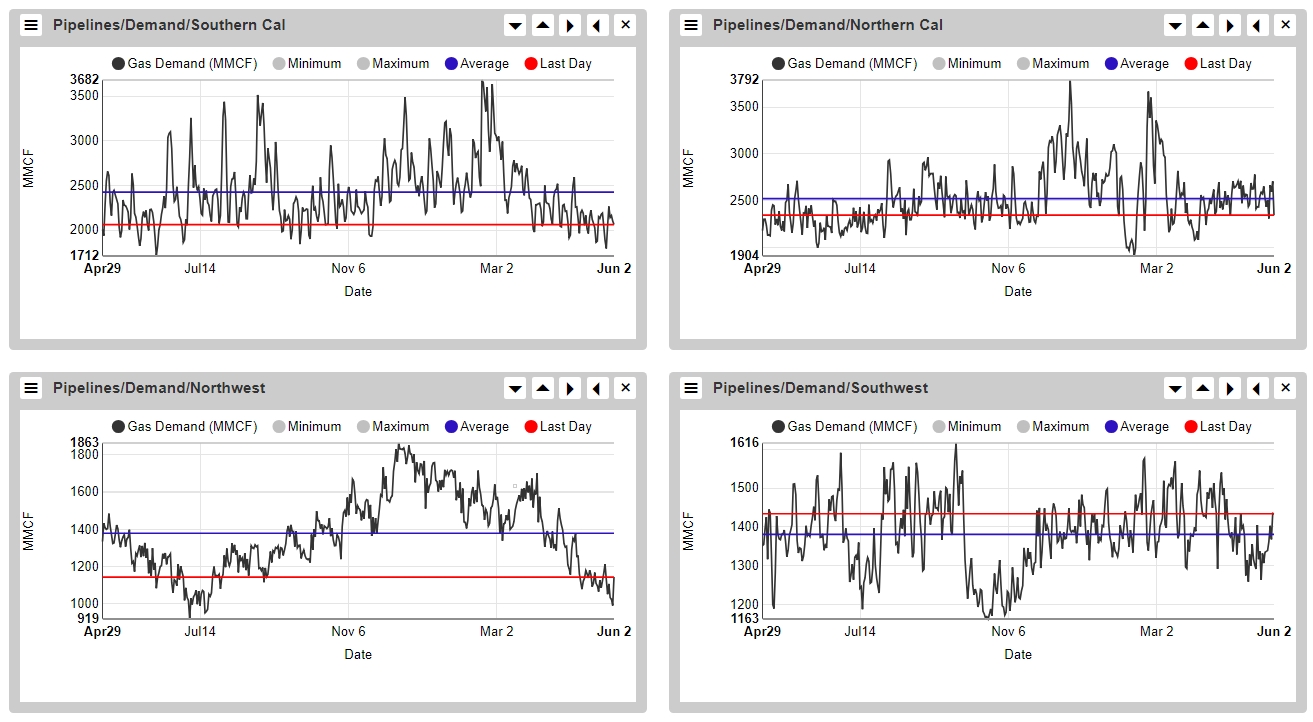 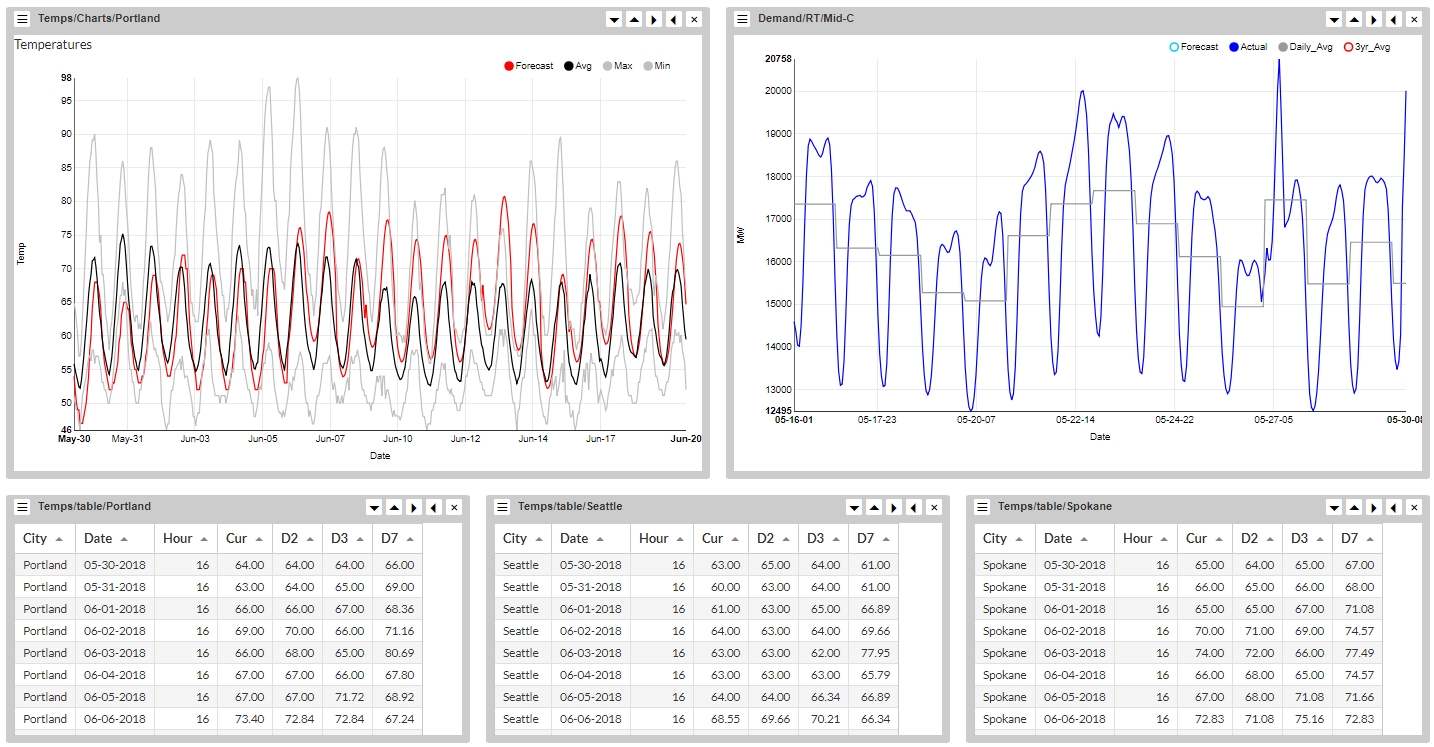 Portland is projecting highs below average for six of the next seven days as temps top out at just 72 (June 2nd) over that span of time.  Similar forecasts for Seattle and Spokane as well; looks like an early summer may have passed and spring is making a late appearance.

Demand rose just shy 1,000 MW yesterday as light loads were up 400 MW and peak demand increased 200 MW (with all hours in between showing a boost as well). 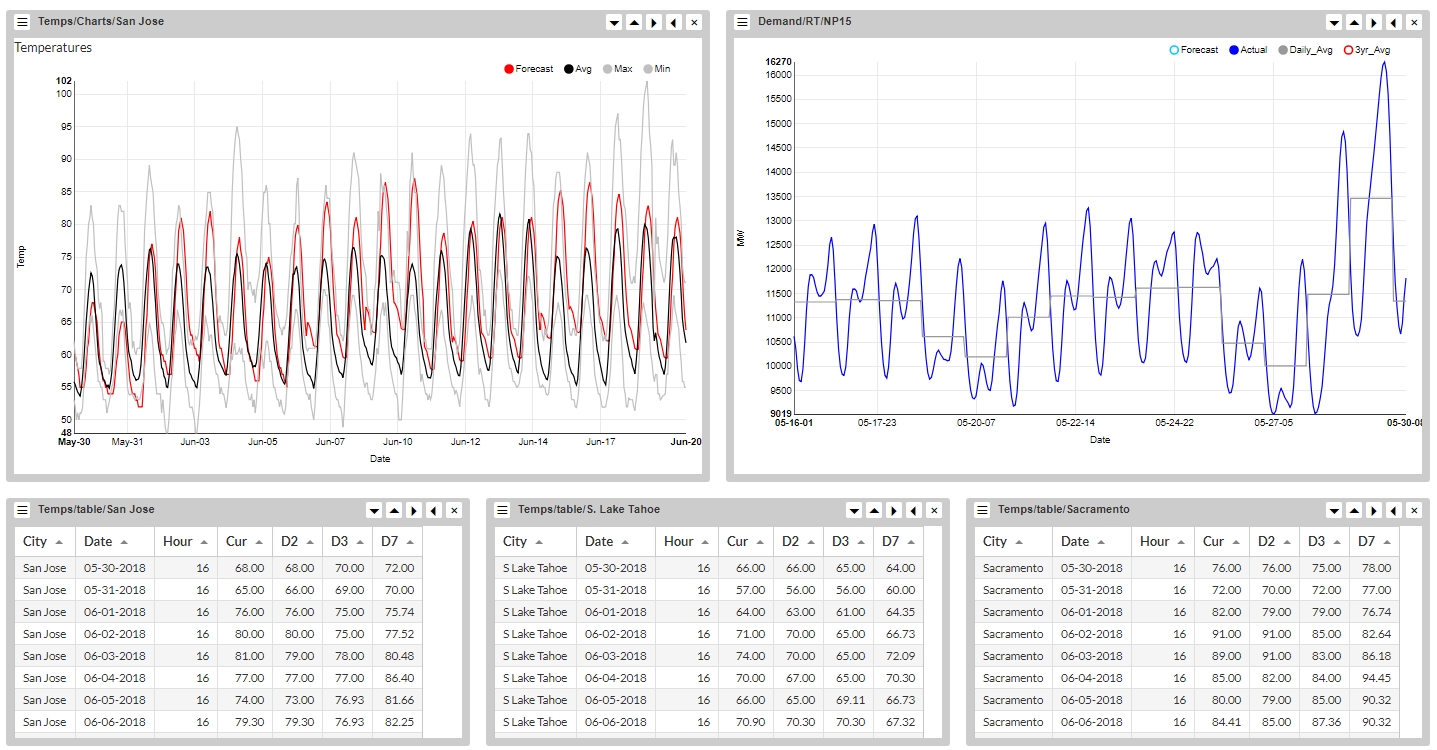 San Jose will drop to nine degrees below normal tomorrow before bouncing back into the 80’s over the weekend.  Sacramento will get a look at mid-90’s this weekend before a slight reprieve with a high of 84 for the 5th. 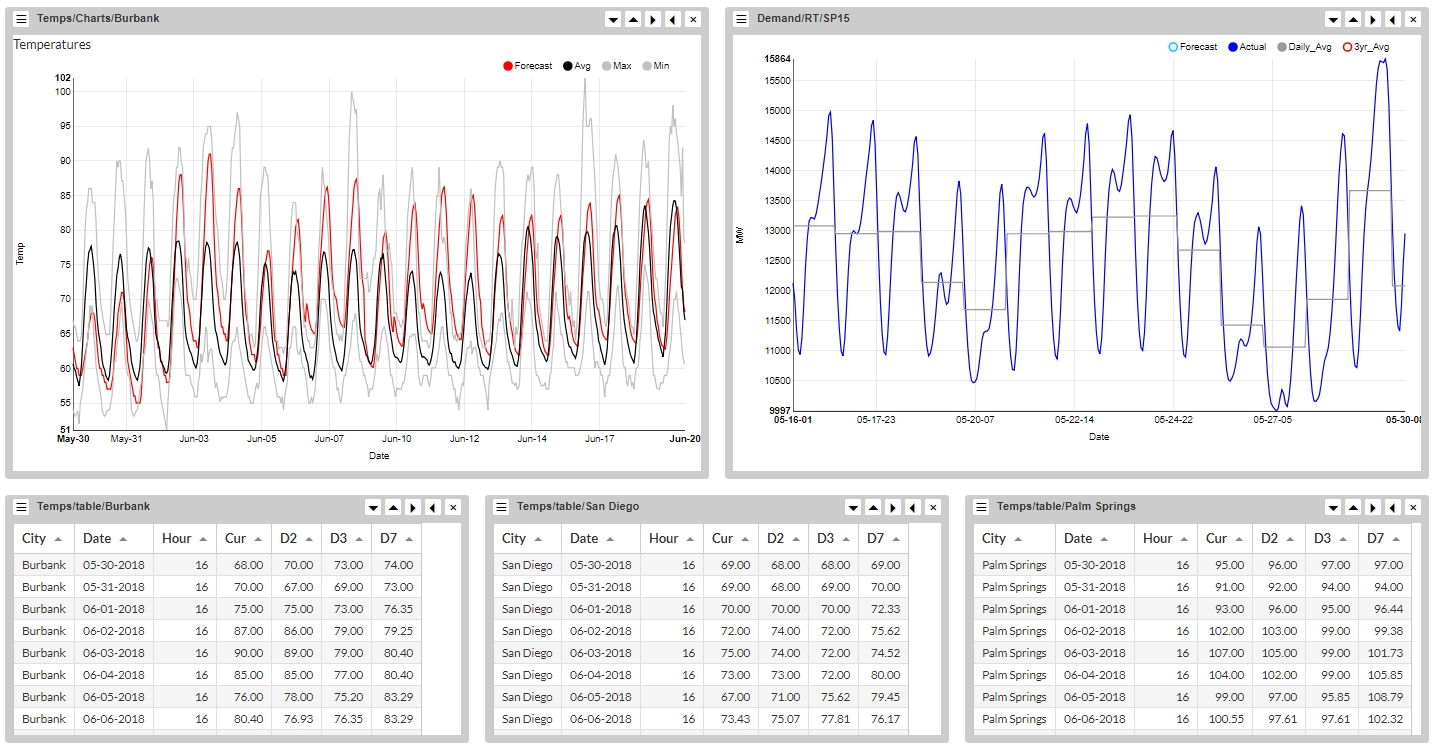 Burbank will get a return of 90-degree temps this weekend as the forecast tops out at 92 on Sunday, 14 degrees above normal.  Until then it’s just a high of 68 today and 71 tomorrow, both well below normal. 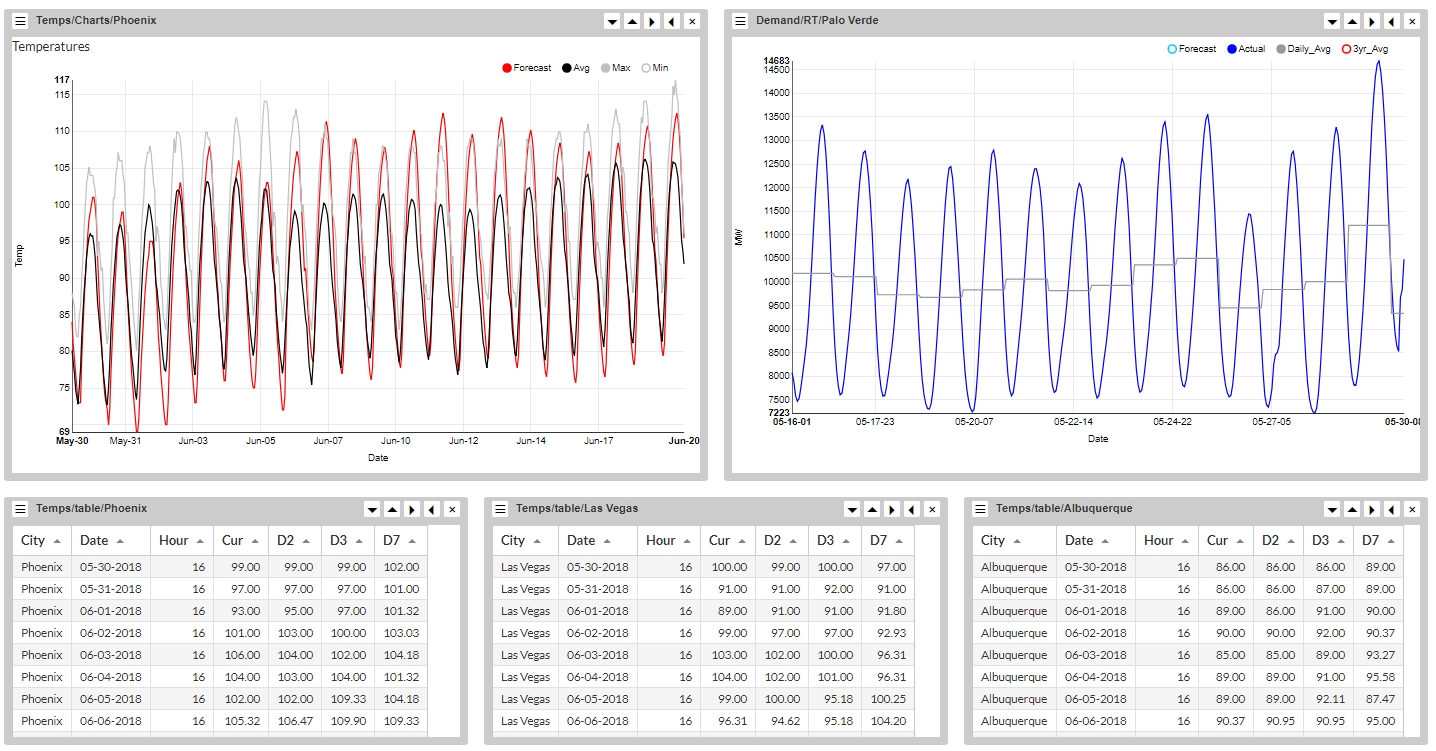 Phoenix will get a cooler end to this workweek as Friday shows a high of 95, but the weekend will bring triple digits once again.  next week is where the forecast gets really interesting as the 7th tops out at 111 while the 6th-15th shows daily highs all above 106 degrees.

Average daily demand increased 1,200 MW yesterday after the end of the holiday weekend, though that amounted to a 1,400 MW increase week-on-week. 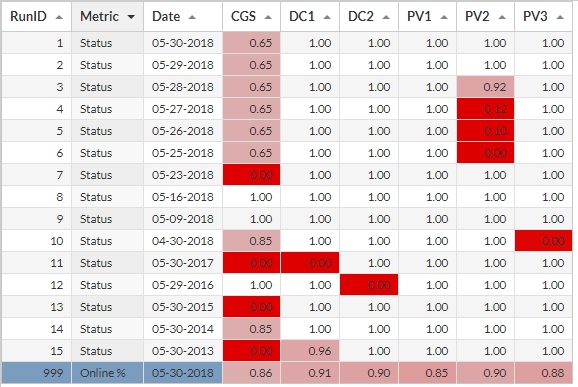 PV2 made a full return yesterday while Columbia Generating Station continues to produce at 65% capacity. 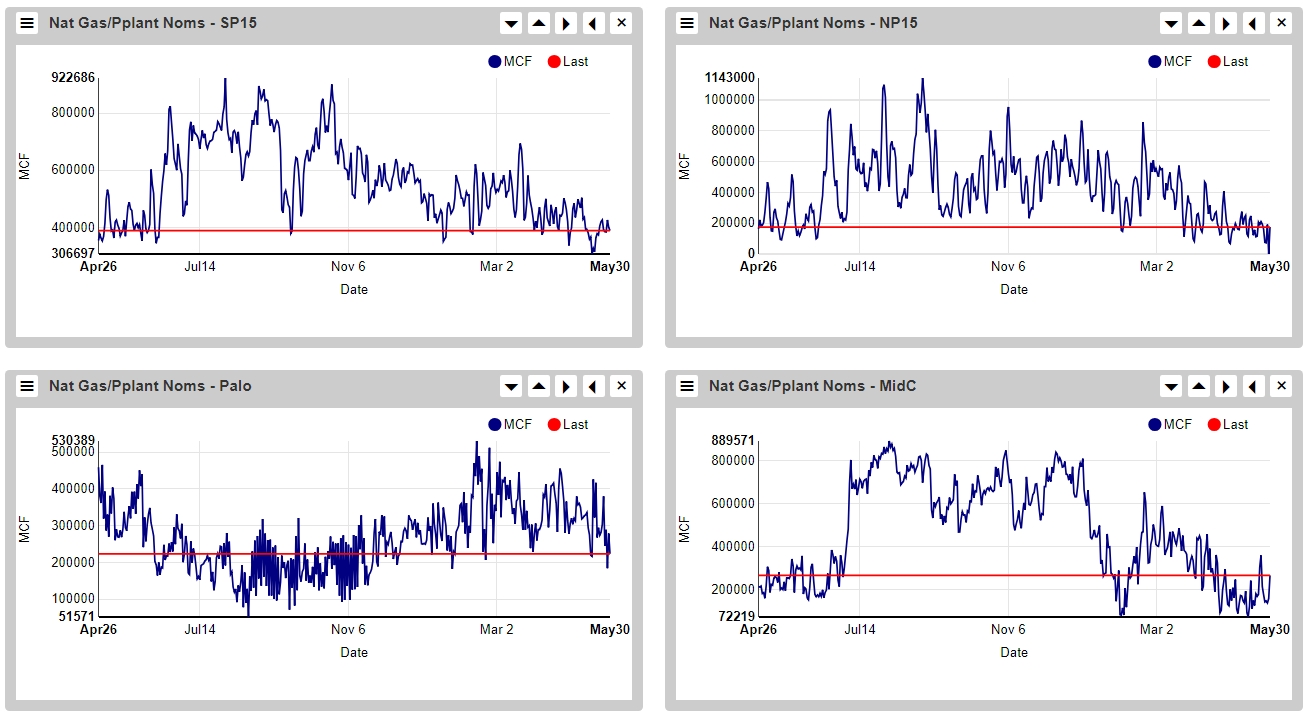 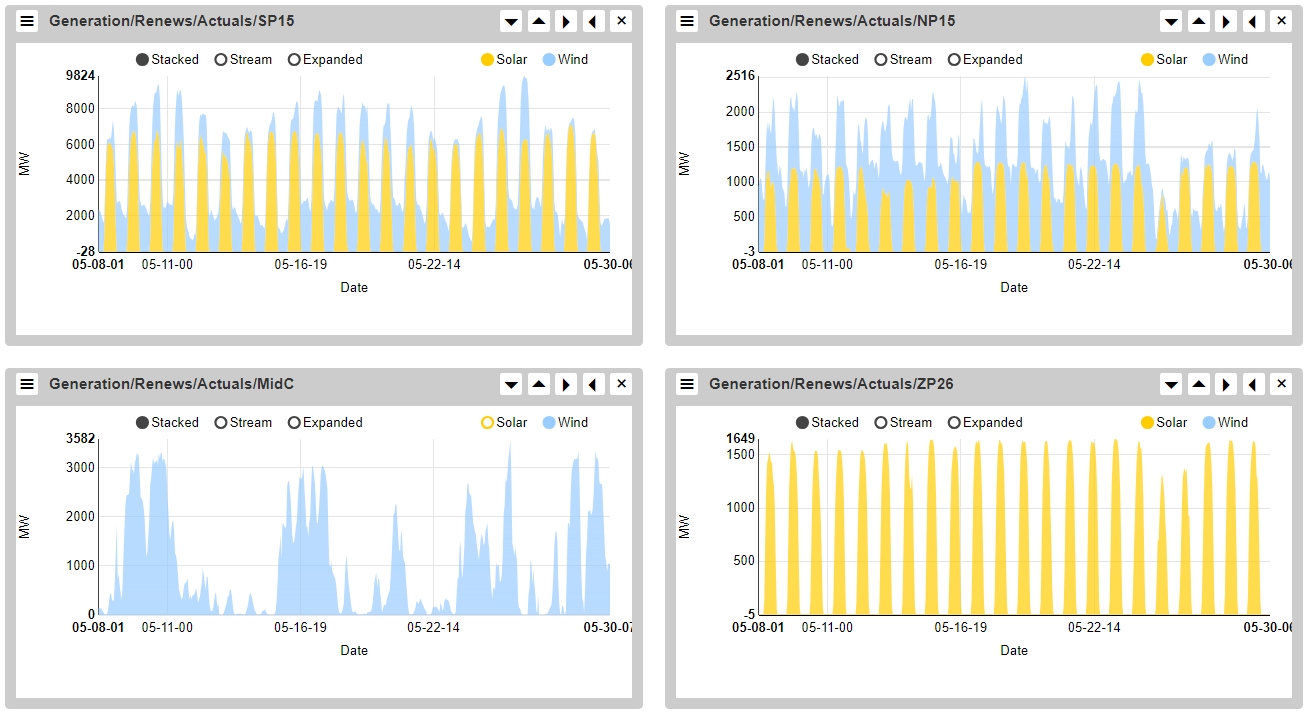 SP wind produced under 2,000 MW at its peak each of the last three days, falling well shy of the 3,000 MW we saw for much of last week.  Wind in Mid-C moved the opposite direction as 3,354 MW, the second-highest peak of the past two weeks. 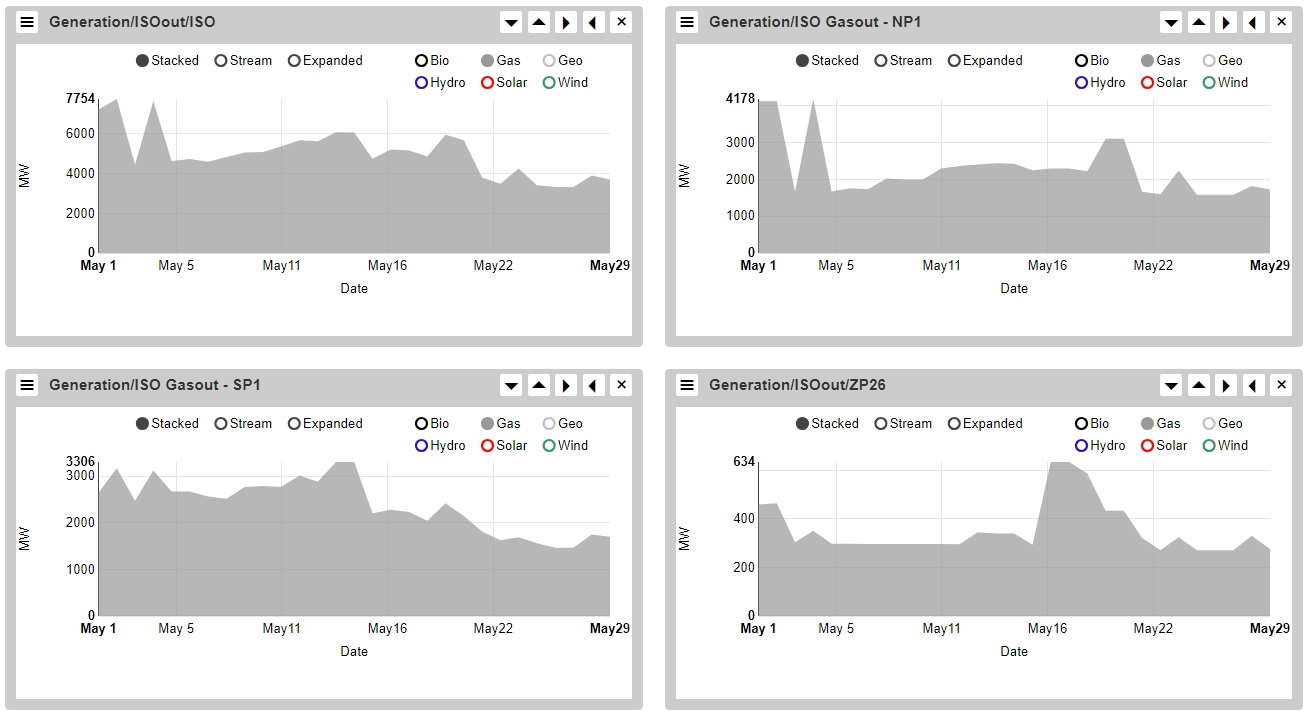 ISO outages dropped 200 MW yesterday, settling at 3,698 MW, essentially the average over the past week. 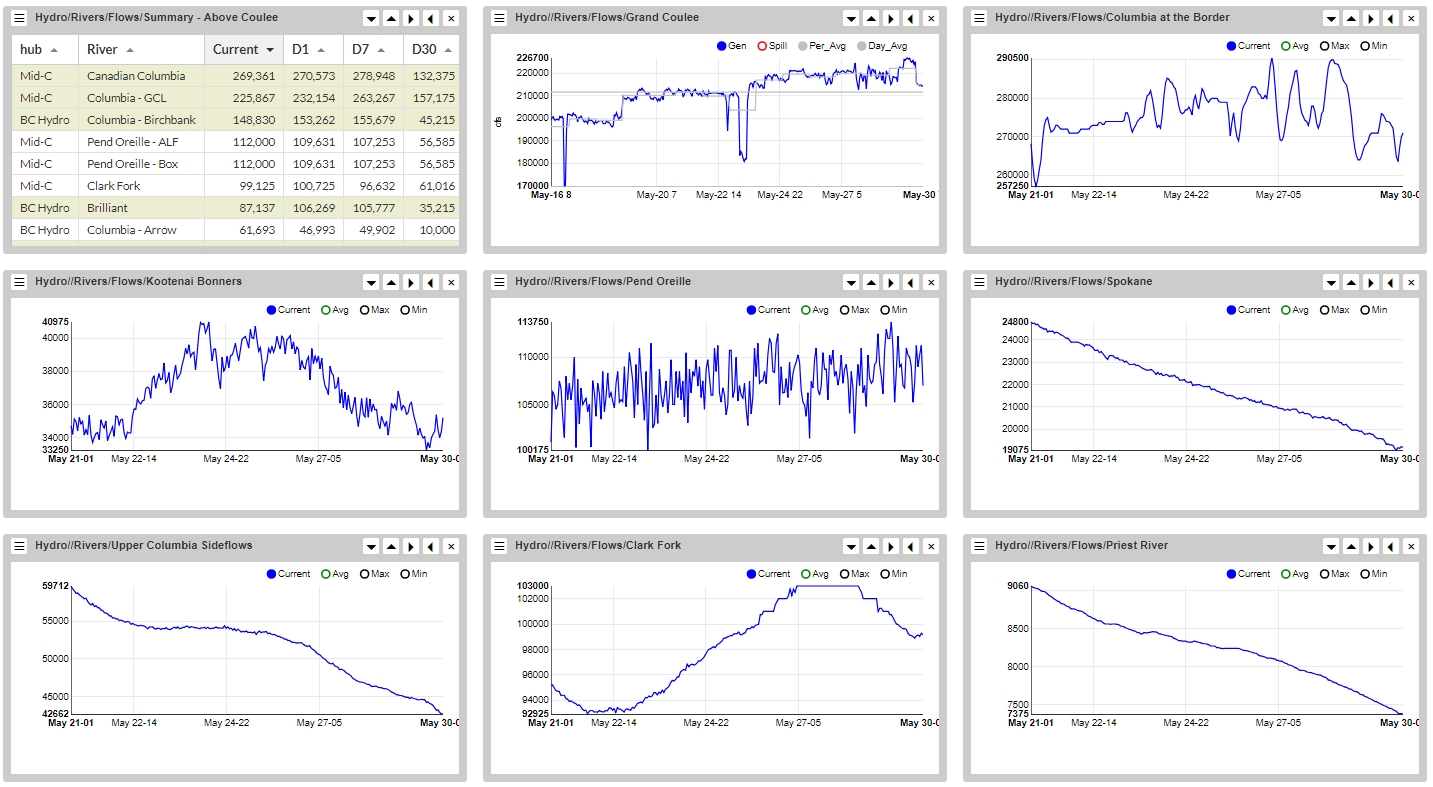 Finally seeing signs of slowing flow across most rivers above Coulee, though the Pend Oreille is the exception.  Clark Fork topped out at 103,000 CFS and is now moving at 99,000 CFS. 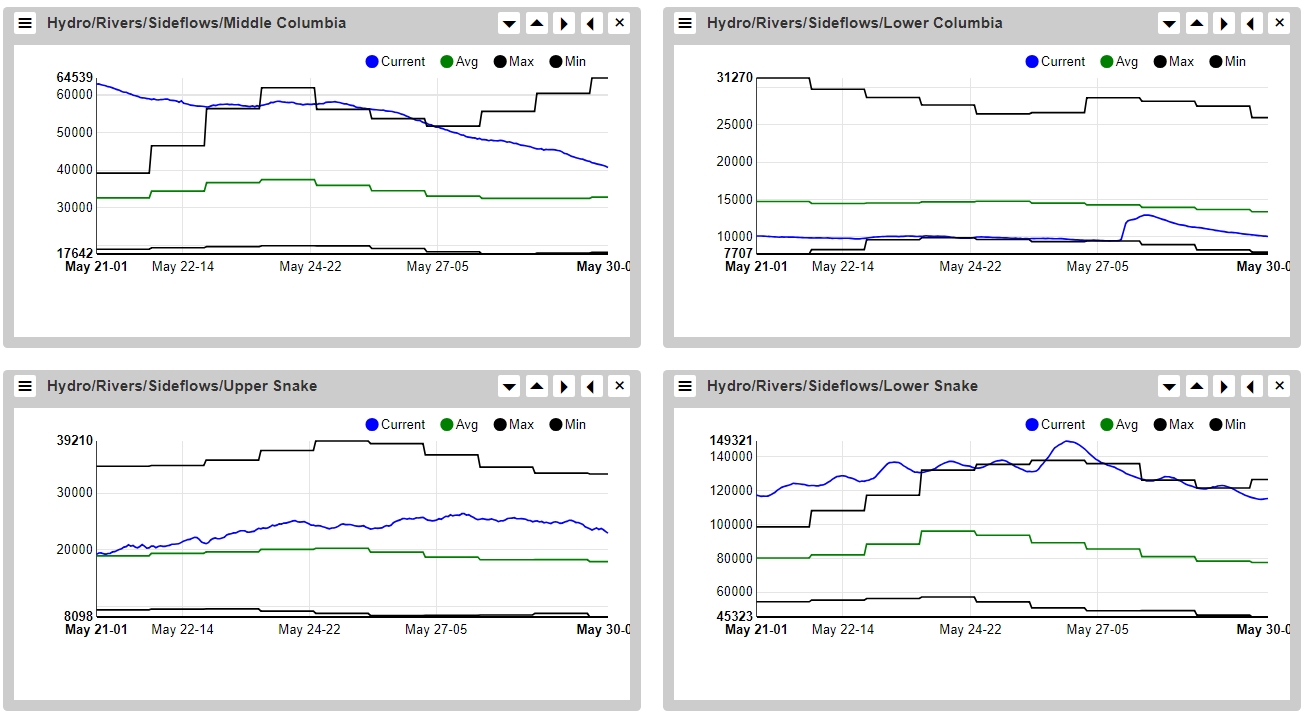 Lower Snake flows continues to lead the way in terms of sideflows, and though it remains above average, the flows are now well below the 10-year records. 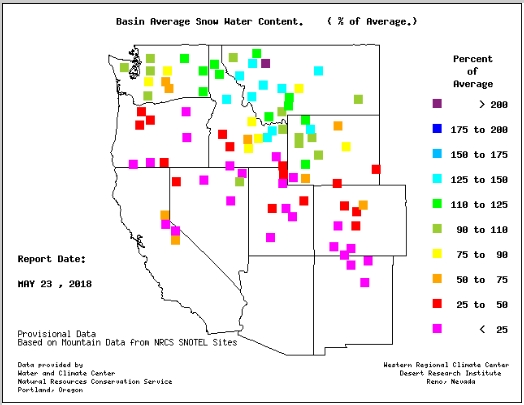 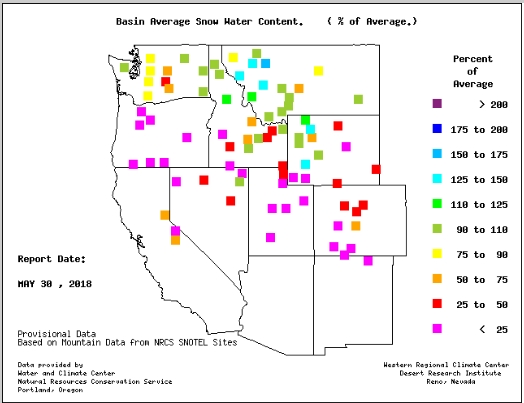 This week-on-week comparison shows that most of the Washington snow is either gone or quickly on its way out, and Western Montana still has a way to go before its melt is complete. 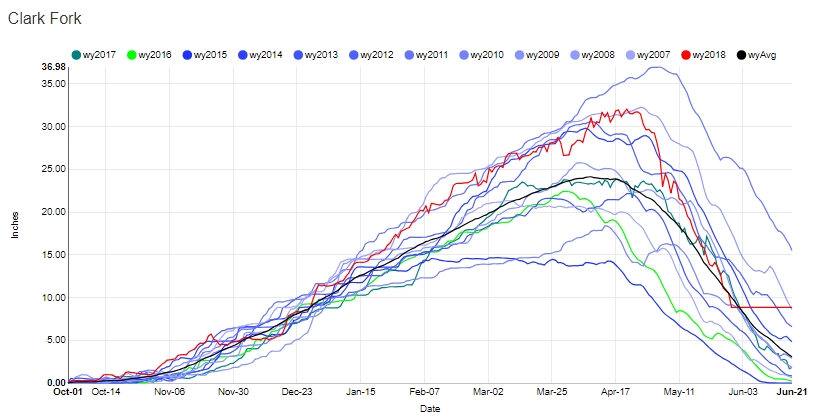 Last week’s heat did enough to the Clark Fork basin to drop it below average (8.85″ in SWE compared to the average of 10″).  The decline from the peak at April 26th has been especially steep. 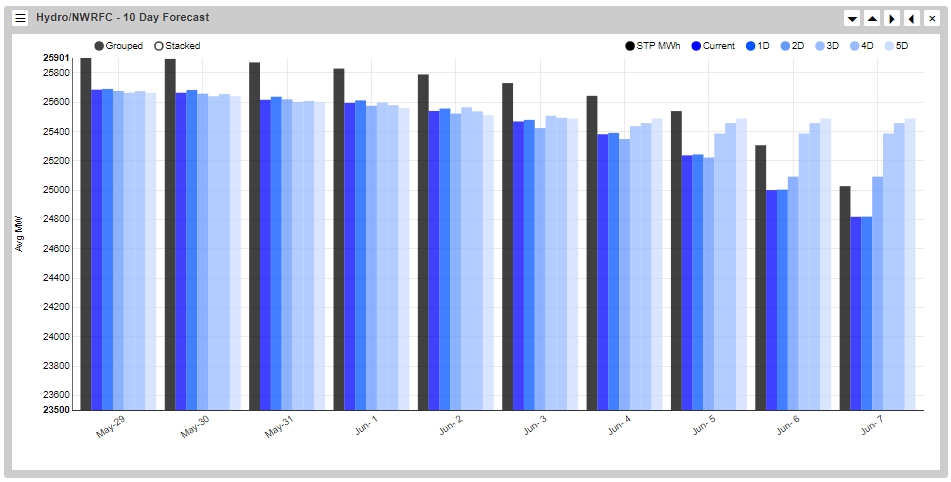 STP continues to pace above the 10-day forecast, though each is moving along the same slope as we see an 800 aMW decrease from today to the end of the 10 days.

We are at the tail-end of a BPA-COI TTC decrease which will expire by 10 AM.  The rest of the next two weeks remains unchanged.