Memorial Day is always a proper demarcation between Spring and Summer; that holiday is now in the past which means we are in summer, right? Weather-wise we’d suggest not so much; water-wise, we’d also suggest not so much. Our hazy crystal ball is proposing more of the same for the next couple of weeks meaning cool weather on the coasts and significant inflows on mainstem Columbia and Snake systems.

May as a tradeable product is done, now it is but a single “next day,” but here are the “going-out” BOM prices: 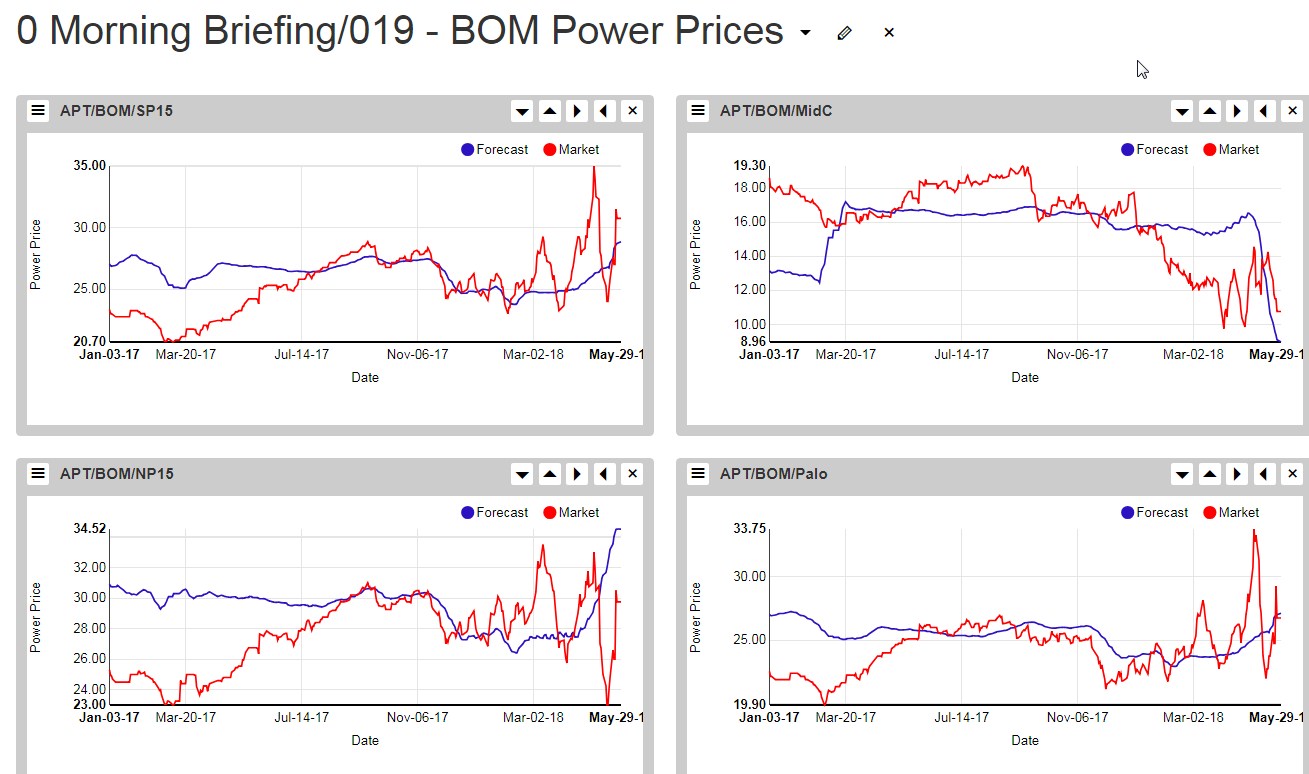 Impressive rallies in the ISO while the Mid-C faltered and is approaching the contract lows for the third time. Now jump ahead to Prompt: 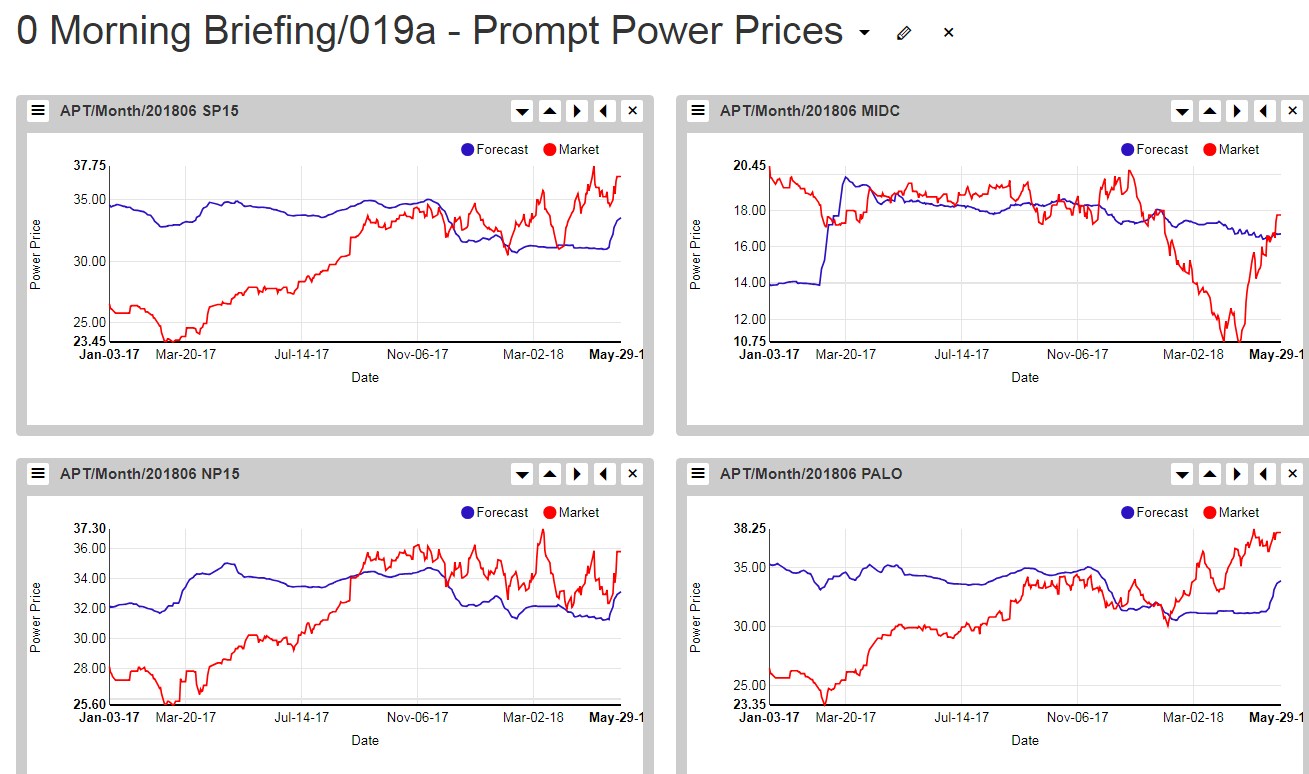 Tale of Two Curves, all four are bullish and MidC maybe the most bullish, at least relative to where was early in May.  But perhaps it isn’t just the MidC that is overly bullish, the other three are at or approaching contract highs. What supports those levels? Not spot gas, those markets inside the ISO are tanking: 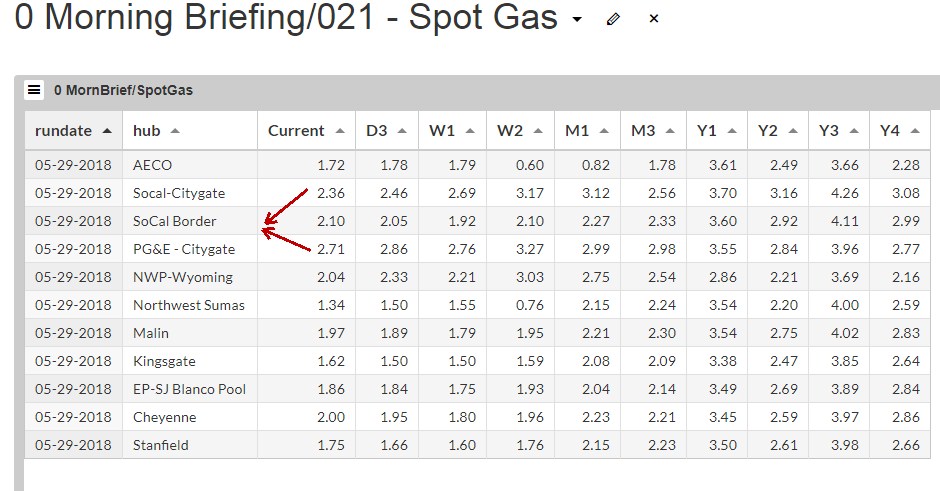 Socal Citygate collapsed $0.33/mmbtu all the while Malin rallied $0.18. The summer premiums remain in the term Socal markets. 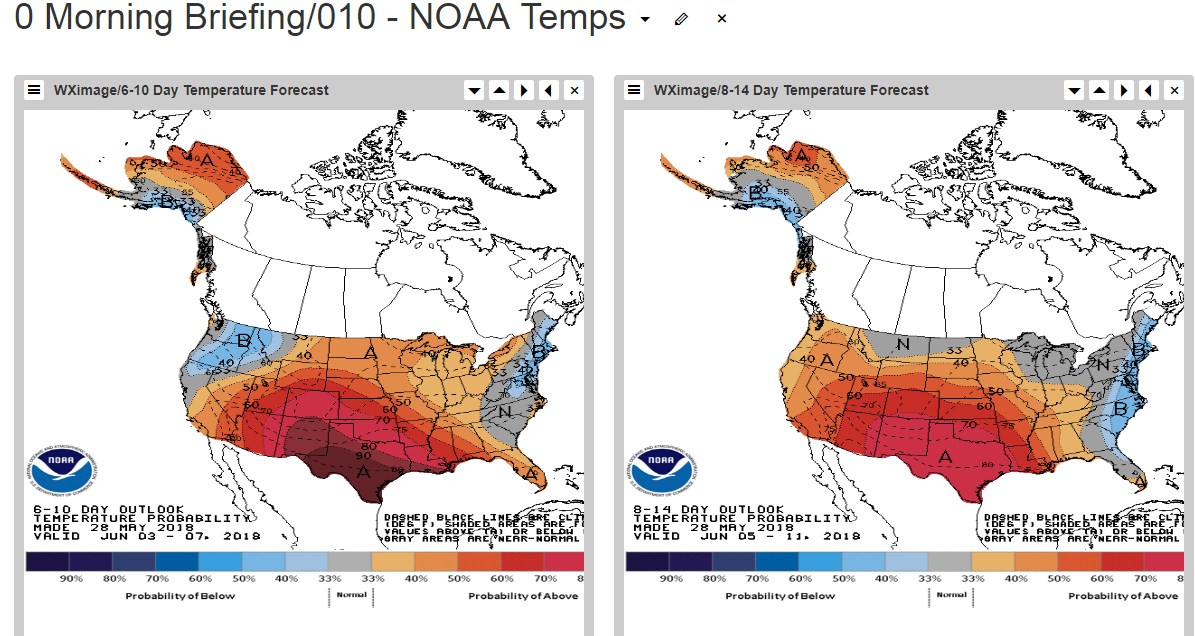 Weather for dummies, aka 6-10 day, would suggest not; if anything, the near-term weather across the WECC is much more bearish than otherwise.

Must be hydro, the Northwest water year is over, BPA will be scrambling to find H2O molecules to fill its reservoirs, BC is hurting?

Nope, the Northwest is about 70% full, having jammed 5 MAF into the ponds and is left with just 3.0 MAF to get full. BC has realized a slower start, but that is just normal. But surely the inflows are finally backing off in the Northwest, right? 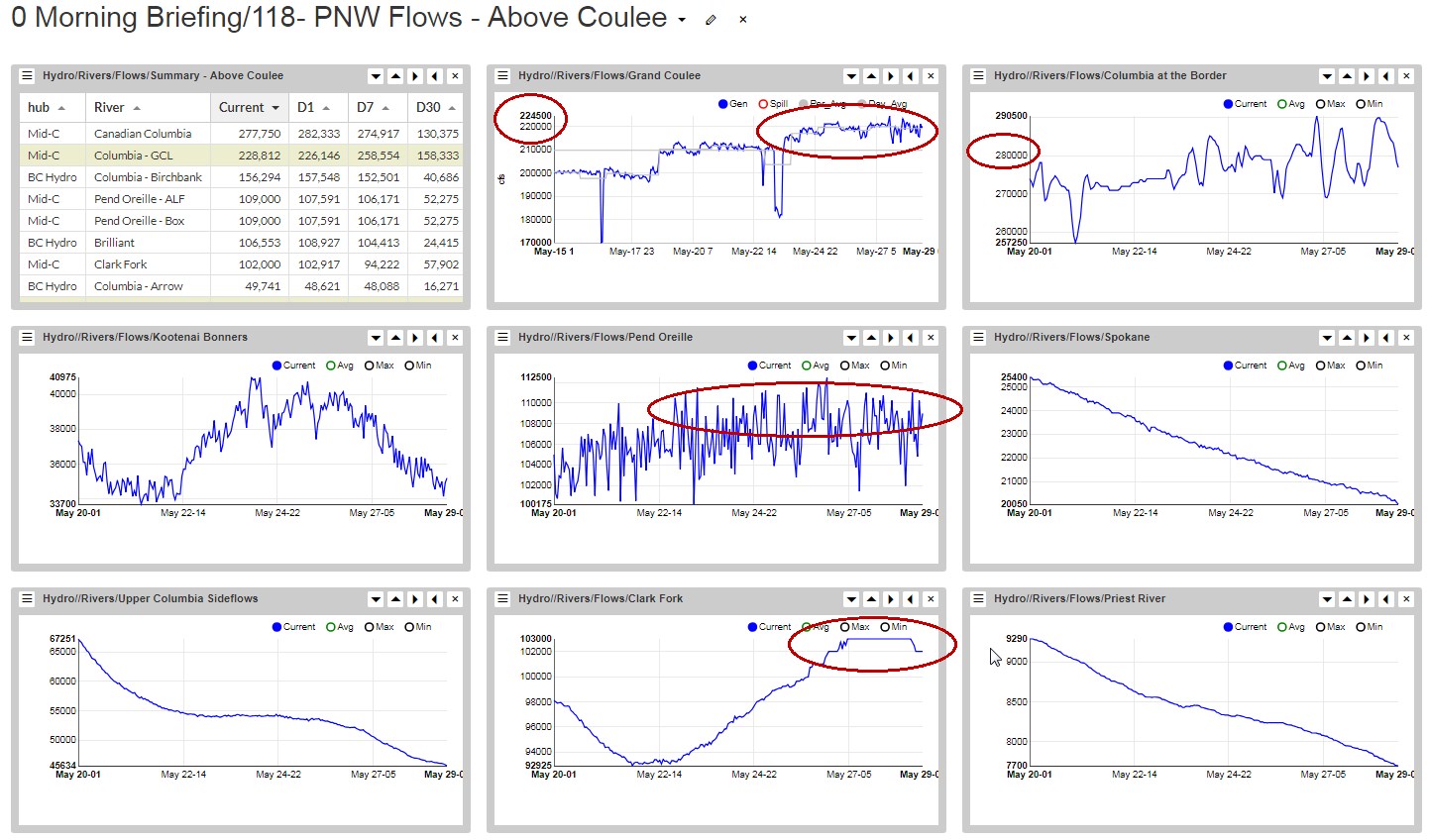 Not really, Columbia River flows at the border are stuck at 280 kcfs, Coulee’s hydraulic capacity is about 220 kcfs. Flows on the Clark Fork and Pend Oreille are over 100 kcfs.  With the weather cooling down, way down, the rate of melt will drop ensuring steady flows for most of June. This suggests a new problem for BPA – filling its reservoirs too fast. More on that in the hydro section. 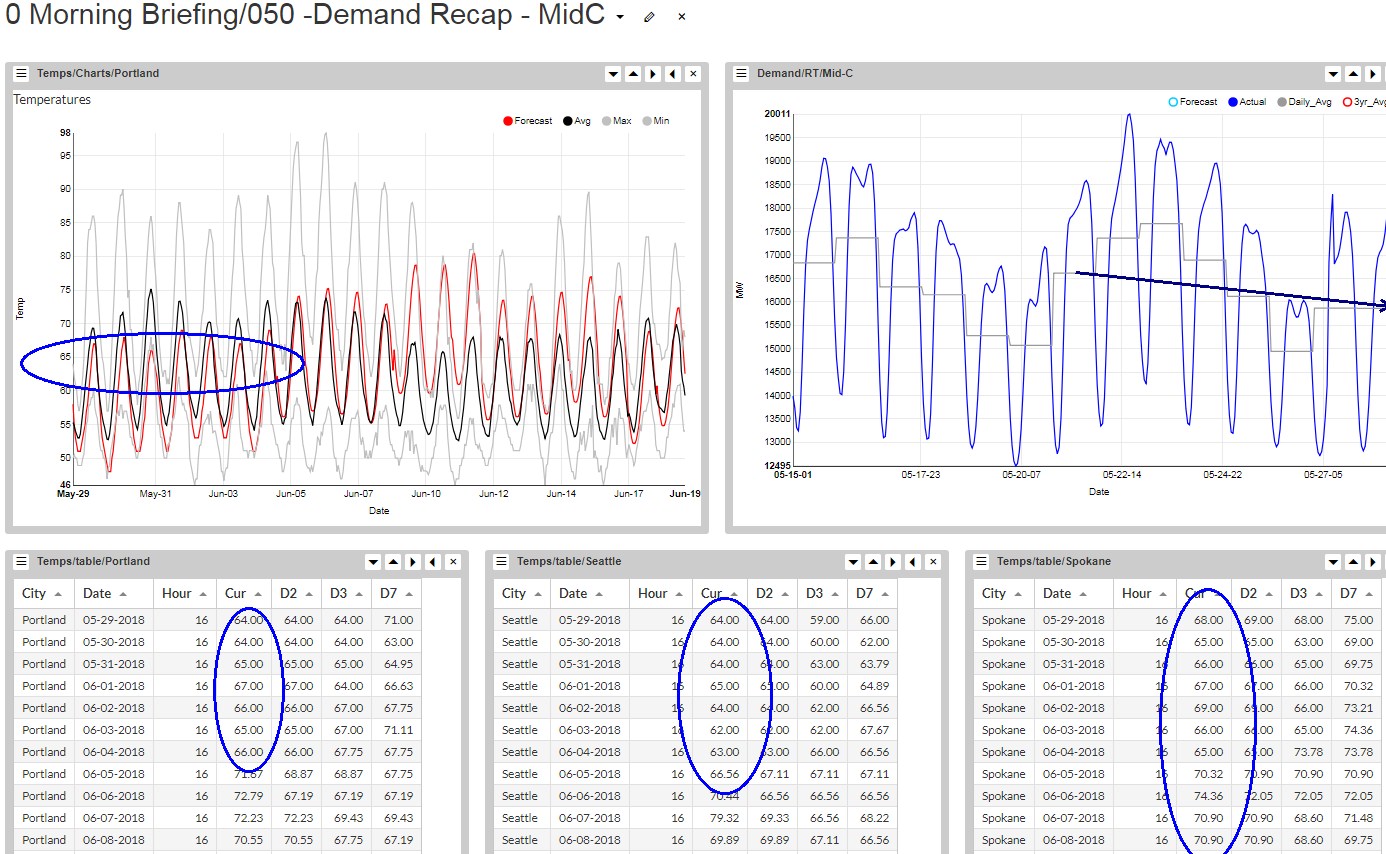 Lots of blue circles that means lots of below normal weather is heading towards the Northwest. This does two things: 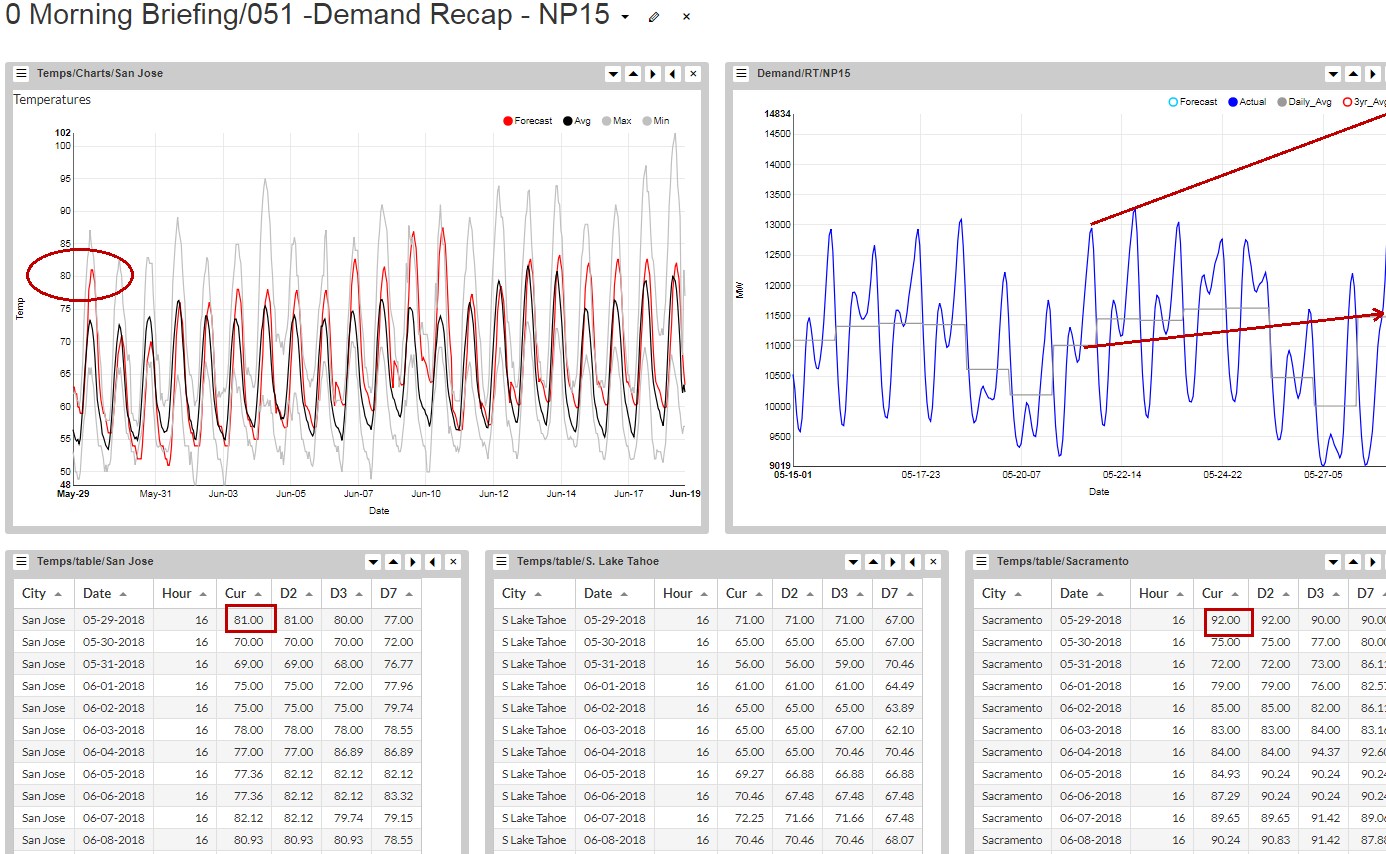 Loads rallied at NP off of warm weather; it was in the low 80s at San Jose and mid-90s at Sacramento. But that brief heat is over, at best NP15’s cities will realize normal, several hours will be below average and loads will follow temperatures. 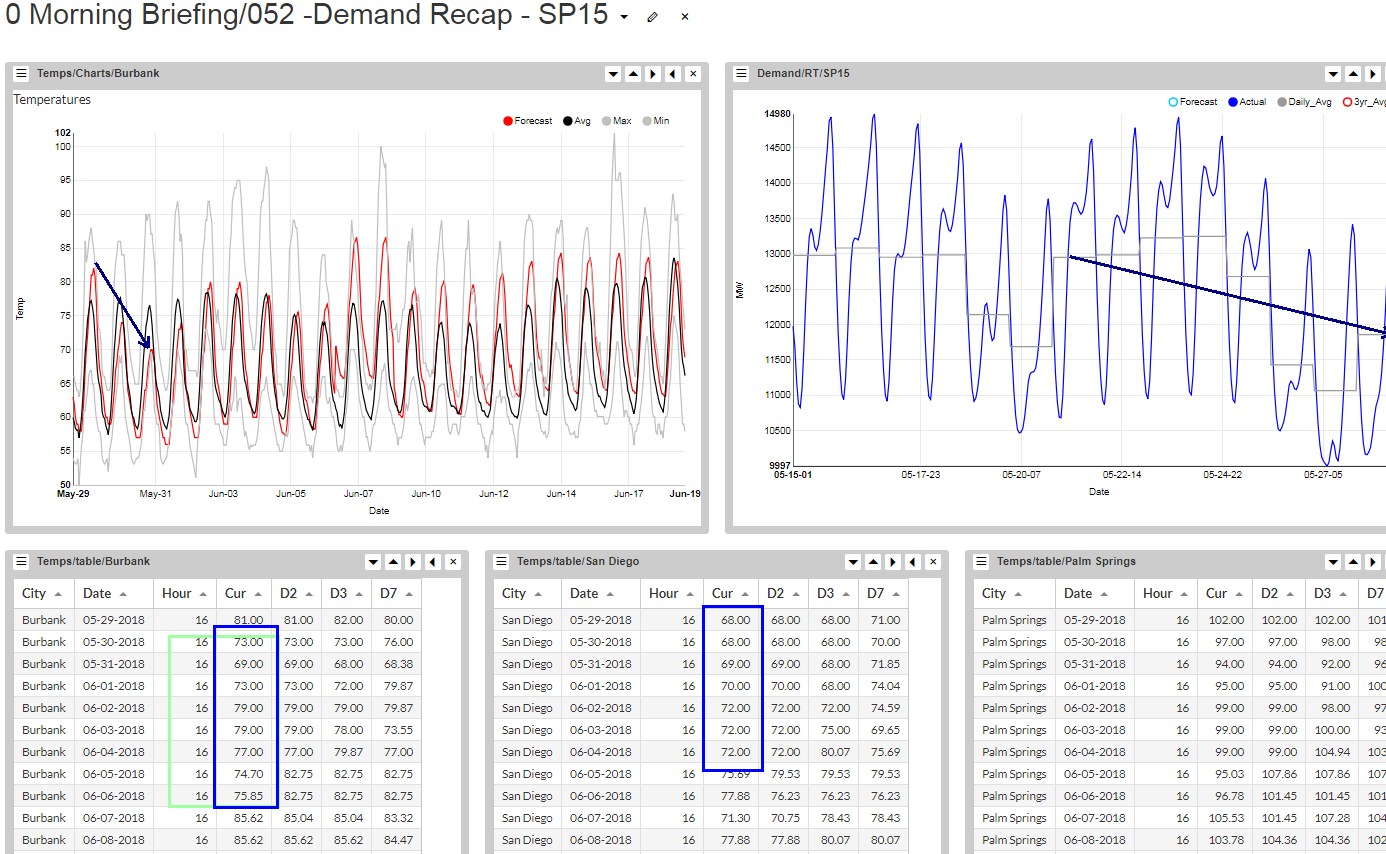 Burbank wasn’t as warm as  San Jose – go figure. There is a head-fake mini heat wave nine days out, don’t bank on it. For now, LA is a lovely 70 degrees every day. Go back to those June premiums, do you think they’ll hold with this forecast? 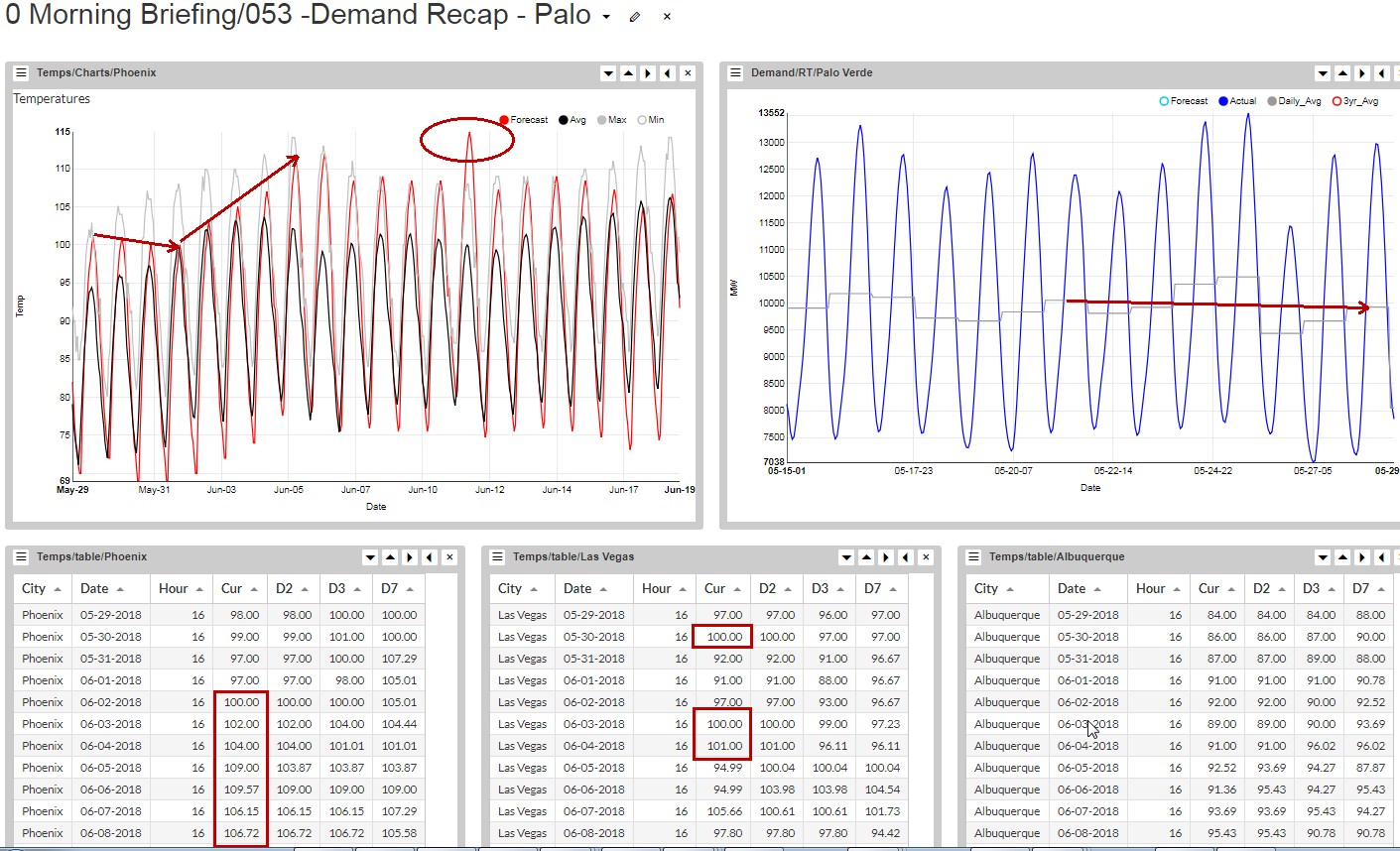 Palo Verde is the sole exception for the WECC; there is genuine heat returning to the desert but not until the end of the week.

These are a couple of new dashboards we threw together that plot the load served by thermal and power prices over the next 90 days.

For the next three weeks, the models are not showing any changes – what you see is what you get. However, at the Mid-C, on or around June 19th there is an inflection point. We think this might be shifted out another week given the cold weather forecast. Still, those $18.00 Junes are a tempting short – in fact, everything but Palo is an attractive short.

Our power price forecast suggests patience which suggests you should impatiently exit your long June while you can. 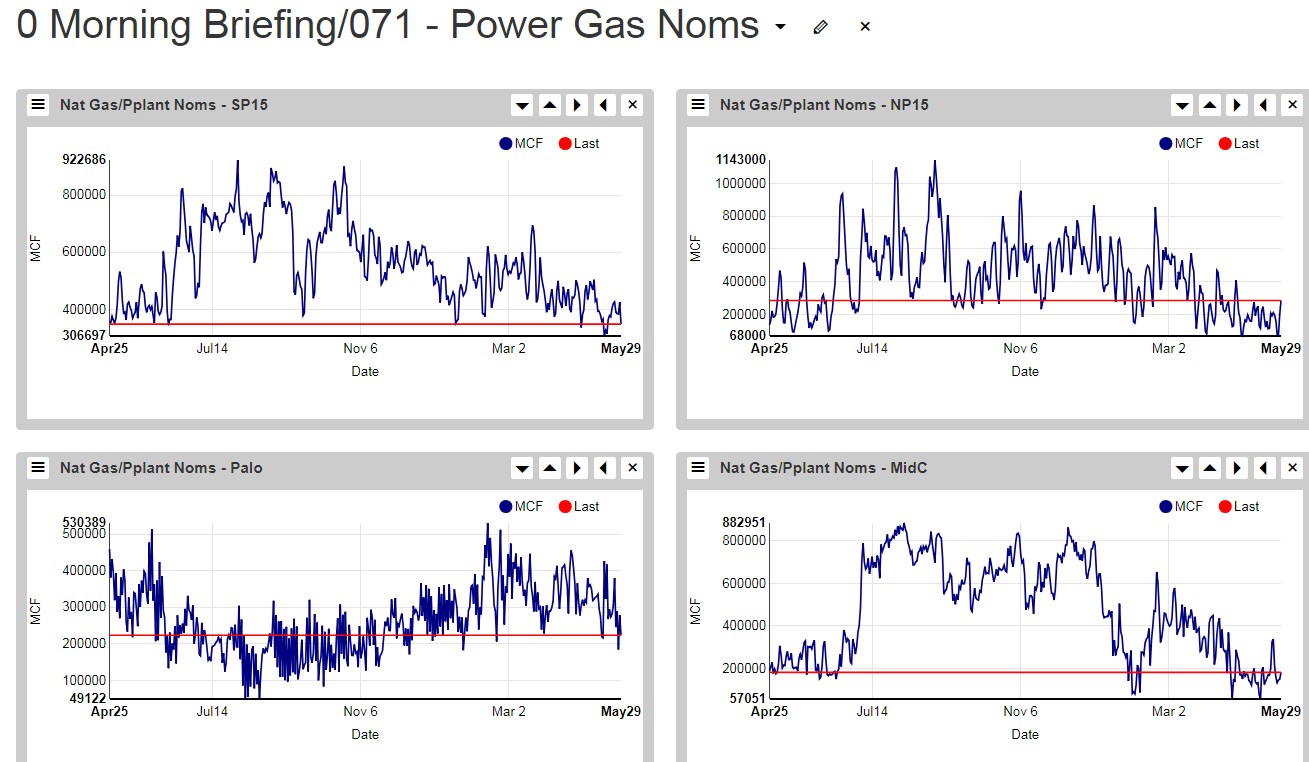 Gas nominations for power plants are “fake news”; it is remarkable how much lower these are today than previous years:

Blame it on the weather.

NP15 realized a dramatic drop in wind, Mid’C’s was spotty.

This a new dashboard view of outages at NP15, broken out by fuel type. We found it interesting to see how much hydro is offline at NP15.

Same dashboard, except at SP15. Both of these are grouped by fuel type and include the kind of outage: Forced or Planned. Each is useful for seeing what’s changed. A null record indicates there wasn’t an outage on that day.

We stole some of our thunder in the opening paragraphs, but there is more thunder left. Let’s start with BC Hydro, after all, that is where the MidC’s pain will originate. 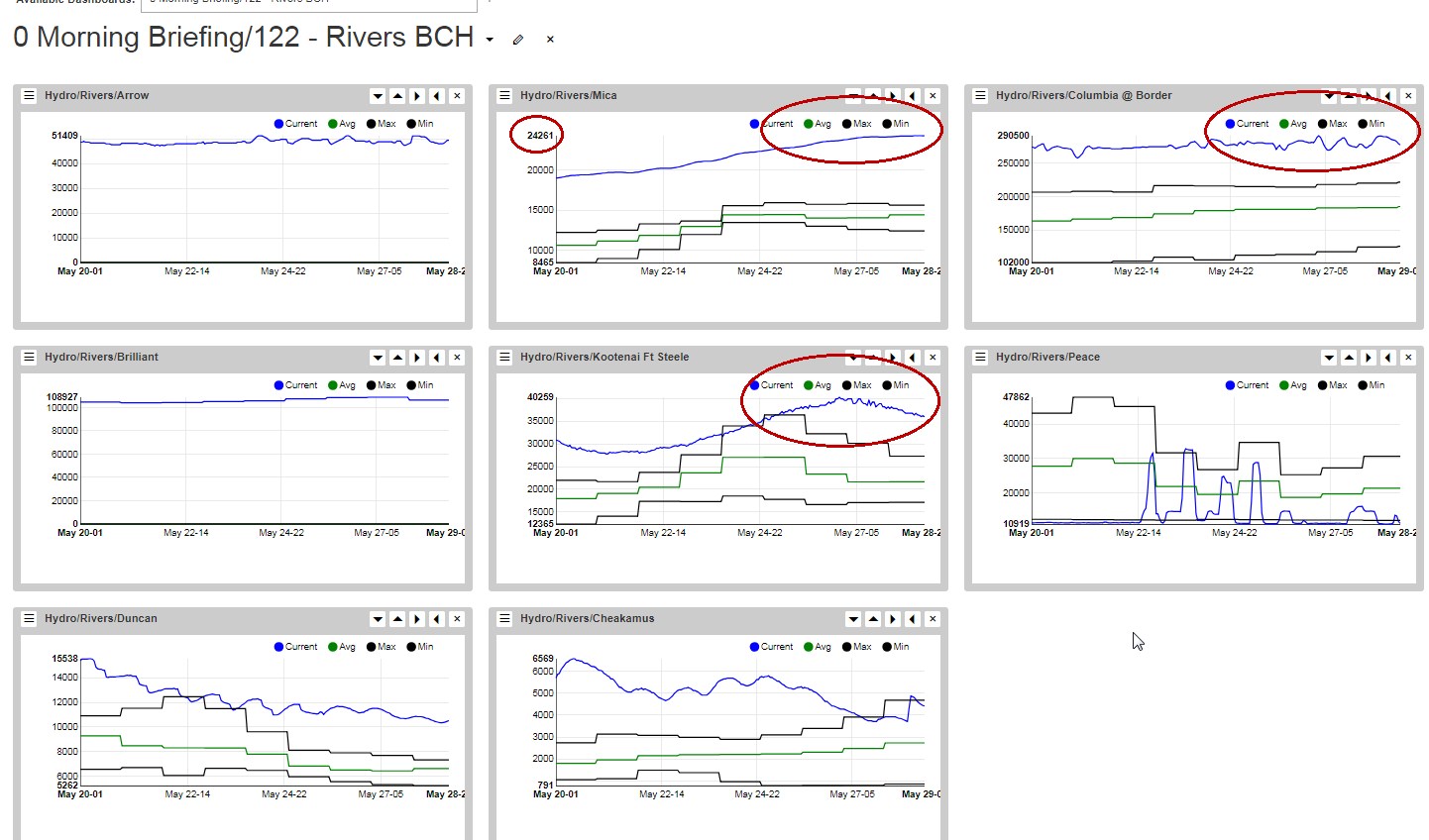 Aside from the Peace backed down to a trickle, all the BC stations are strong to “real strong.” No sign of abating, Mica keeps rallying while Arrow holds steady at 50kcfs.

Coulee’s inflows are an amazing 280 kcfs and are steady, but the refill isn’t; the pond is now at 1261′, assume functionally full around 1288′, leaving just 27′ to go. Last week they added 15′, don’t expect much less this week, putting the reservoir perilously close to 1280 by June 7. Worried? 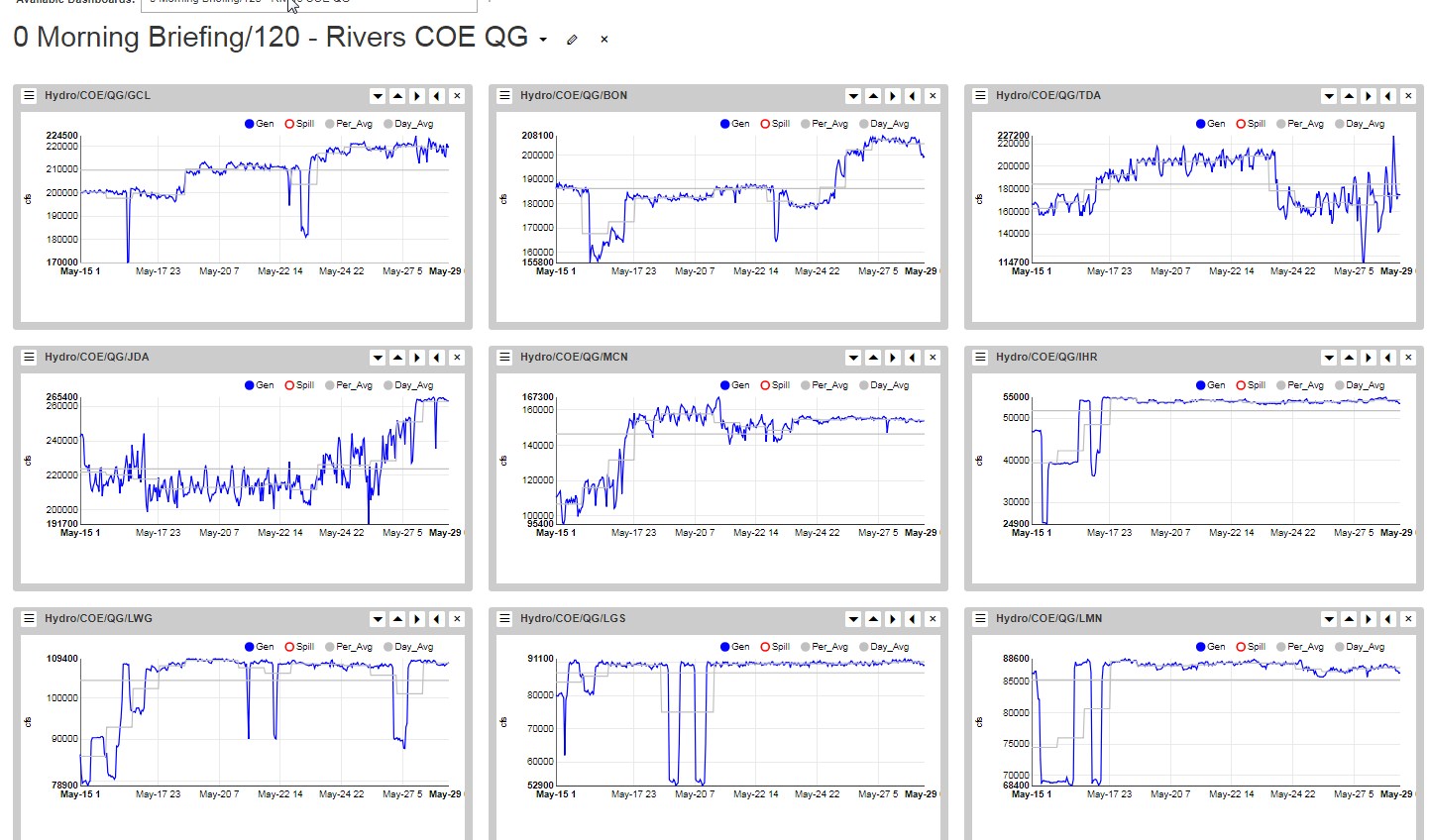 This is a plot of mainstem water through the turbines (QG), and we saw several projects increase energy. Oh, and by the way, you can also expect more energy out of Coulee for the same amount of water as the head grows ever higher. 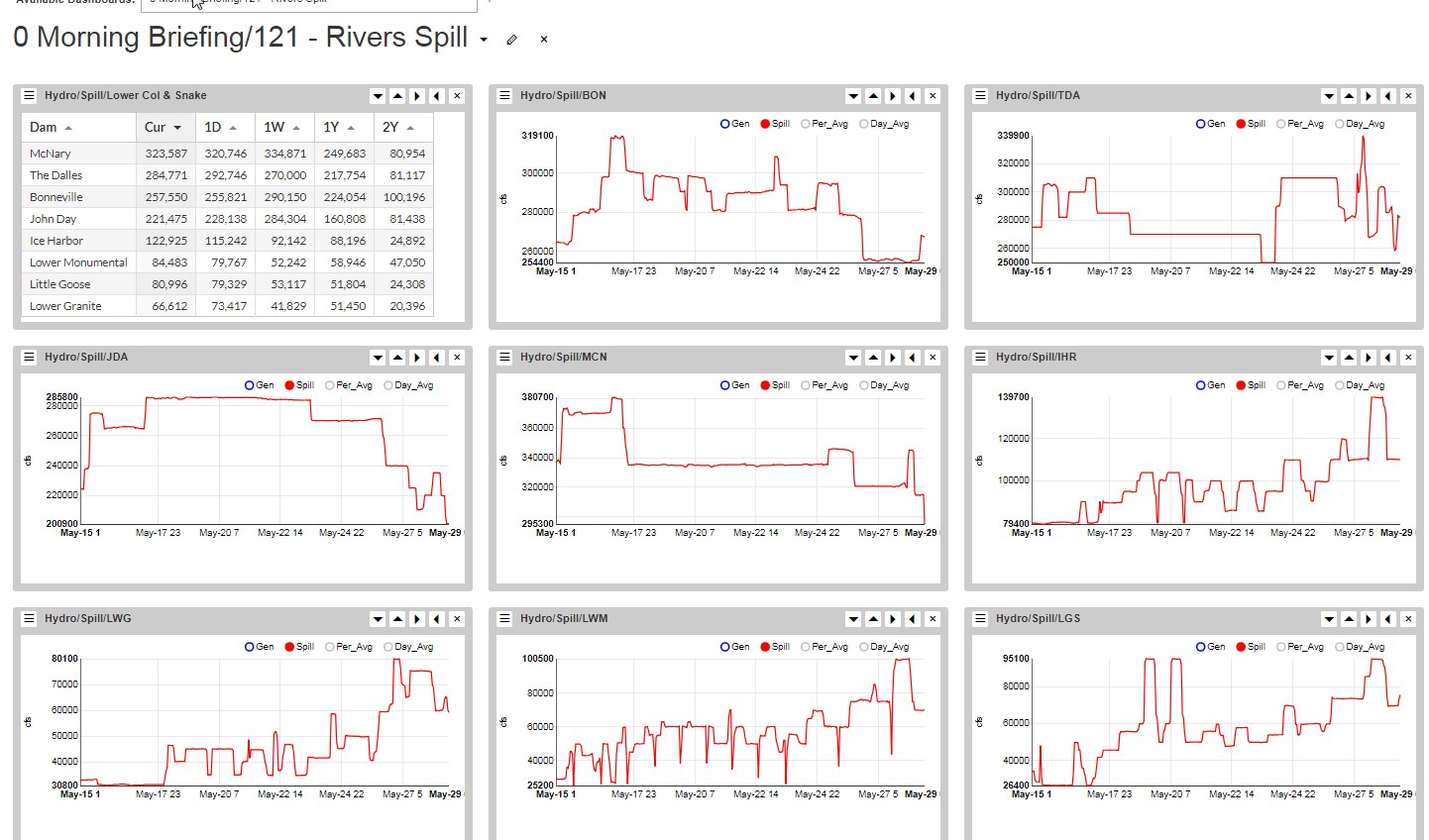 Most mainstem spill has dropped suggesting total inflows are coming off, which they are. Sideflows are down almost 50kcfs, but still, check out the total flows at BON – 450 kcfs.

Let’s look at snow because that ultimately will determine when this monstrous water year ends:

Everywhere is now at, or below, normal suggesting that inflows should back down, except for … 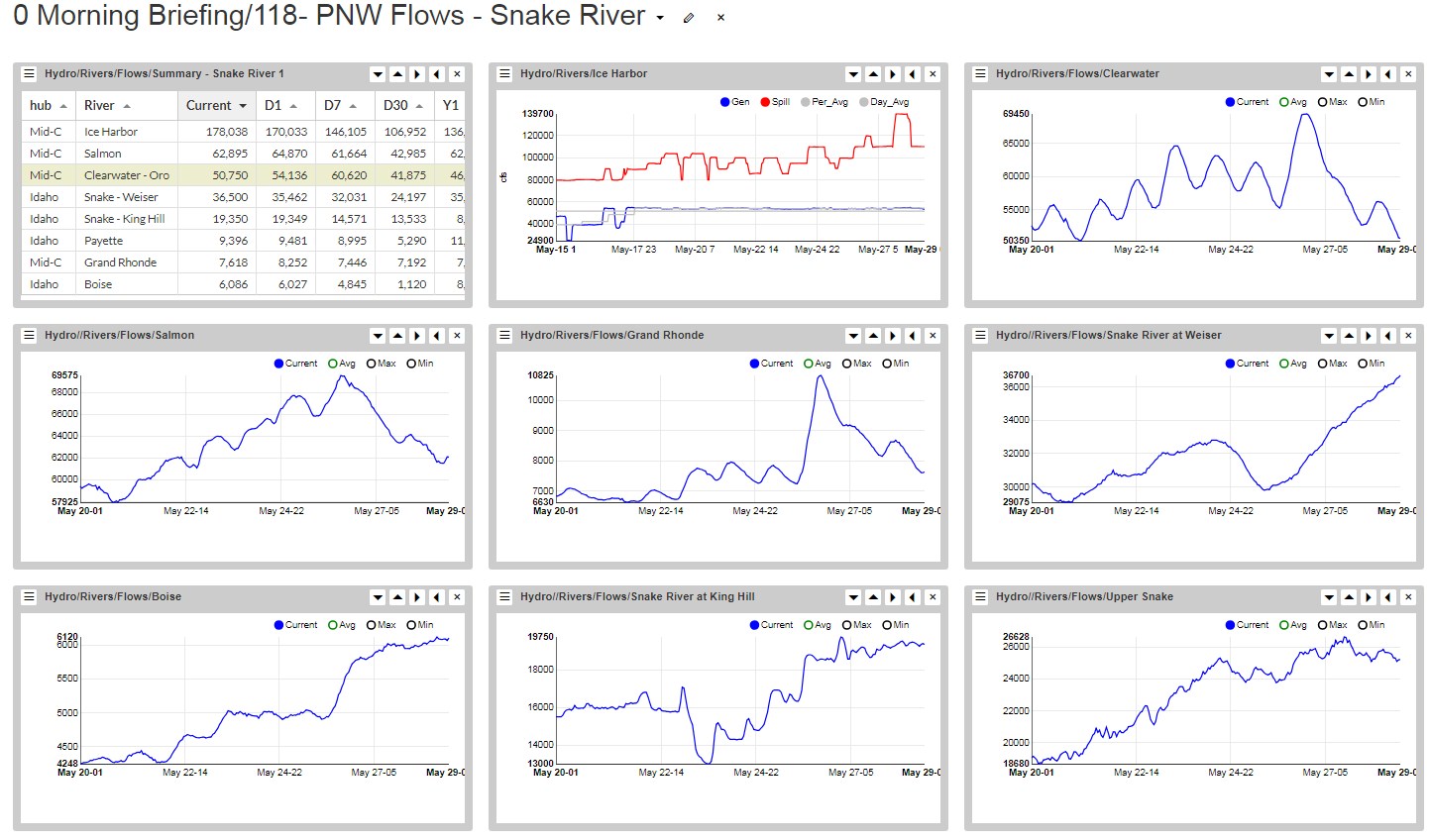 FLows on the Snake are a mixed bag, but none of these stations have cratered, yet. 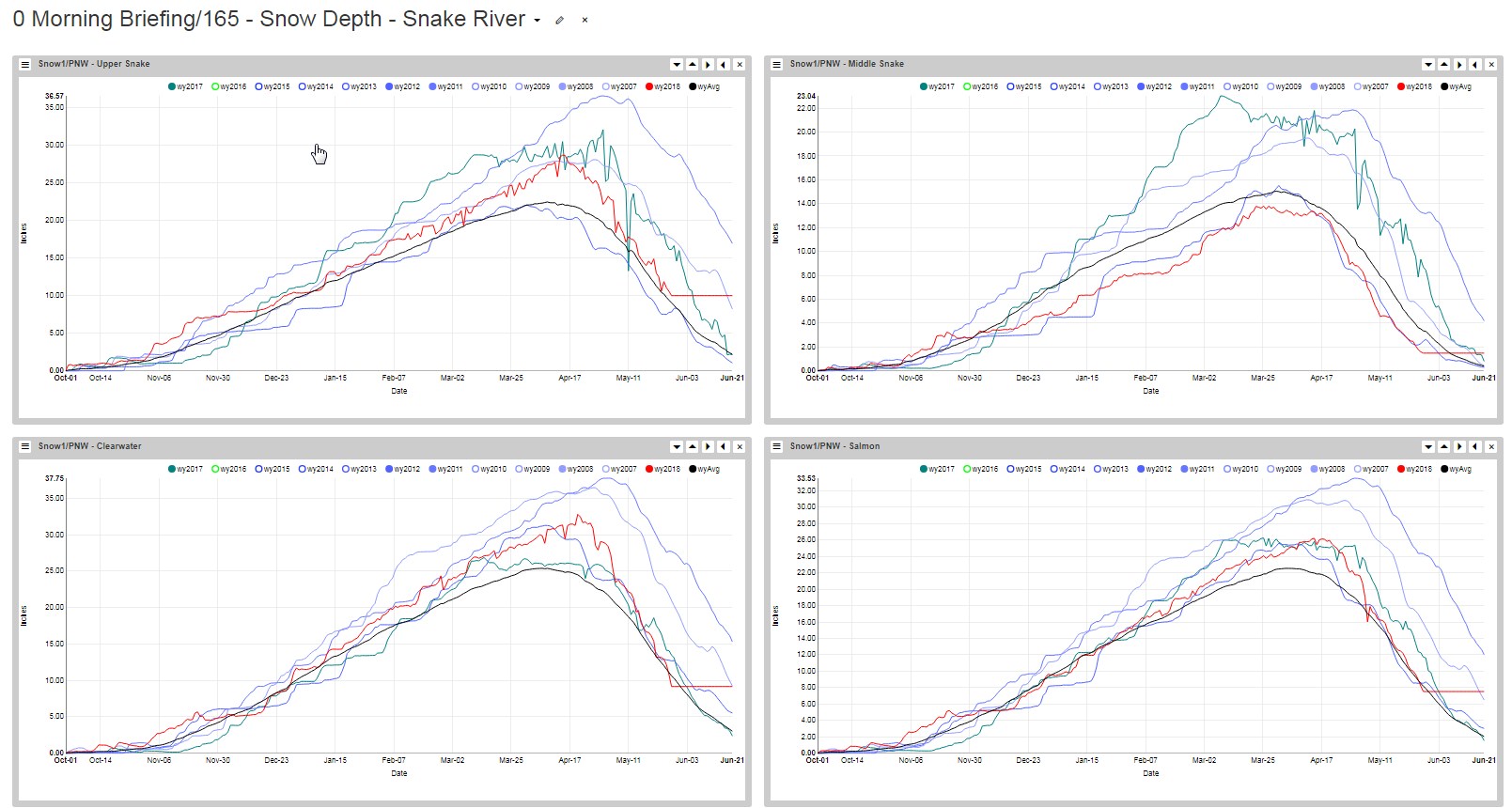 But that is coming, still not for a week or two.

What leaps out of that table is the July change – up 1063 aMW, all of which confirms our theme. Look at the daily energy:

This is where the June 19 inflection point is coming from, for the next two weeks not a big change in total energy, then the slide starts. But this cold weather should shove that out another week. 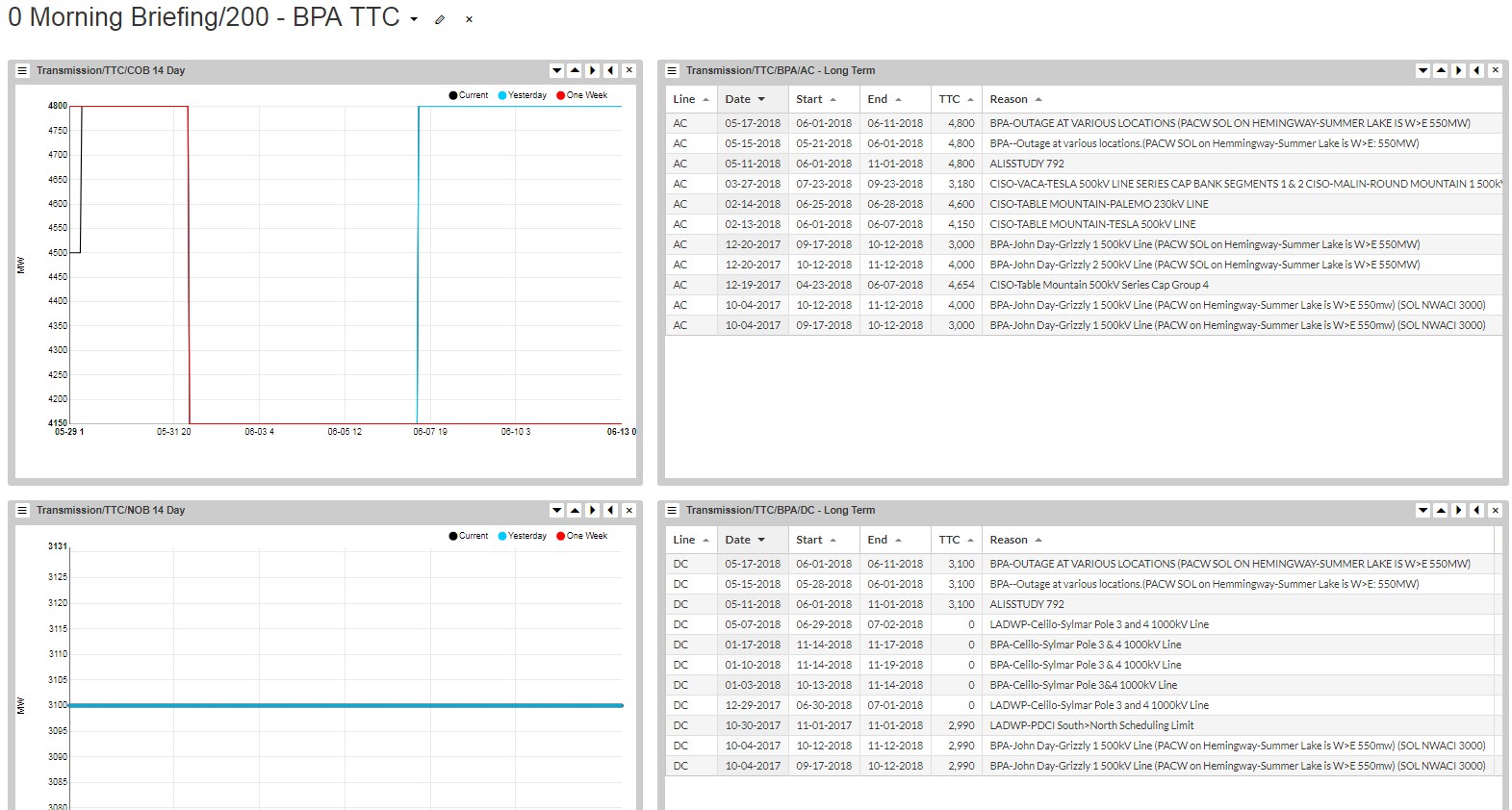 BC is holding its net imports at zero; ZP sends more energy north, Mead and Palo increased exports to SP.

We are bears everywhere but Palo.