Given that the water year is winding down, at least the uncertainty that a water year brings is diminishing, all that is left is temperatures and outages. Not a lot of heat in the near-term forecast but there are some nukes offline: 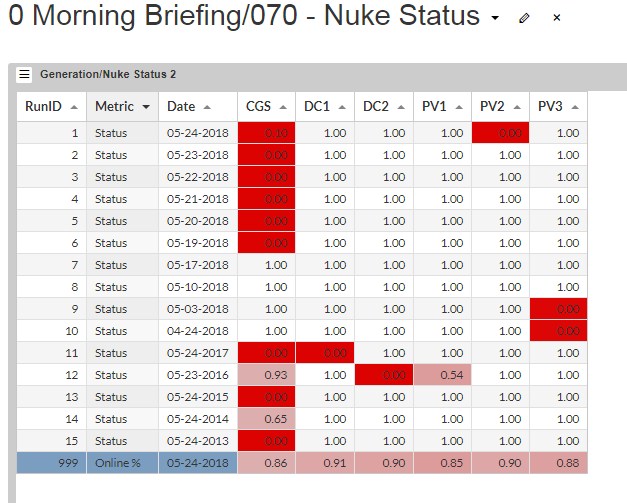 PV #2 is a surprise, we don’t have it scheduled for refuel. CGS isn’t a surprise; we mentioned a few weeks back that BPA would probably take it offline in its quest to keep the gas on the margin. So far, BPA has done a noble job in that endeavor, most days have cleared with a gas heat rate. Makes one think of “paradigm shift”; if BPA can keep the gas on the margin while Coulee sees 280 kcfs inflows perhaps we’ll never again see single digits at MidC? Food for thought. 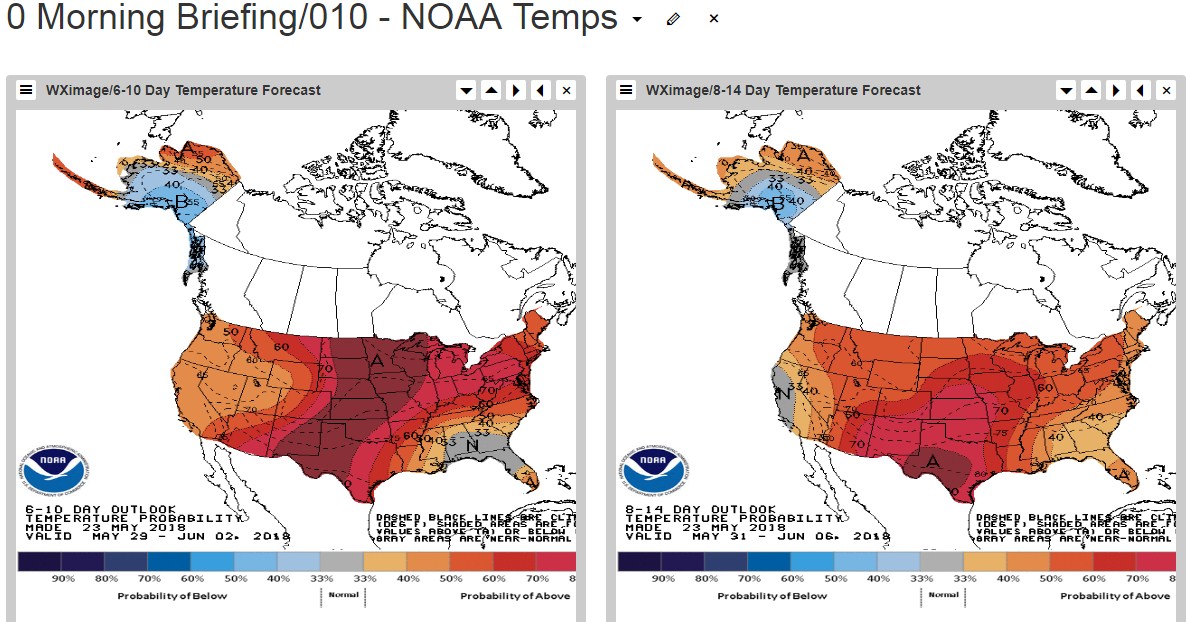 The 8-14 day just made the ISO look a whole lot worse that it currently is, and that SysOp has been weak of late, though the LMPs have firmed:

So the teens are gone, but the heat rates are still low, especially when compared to Prompt Month: 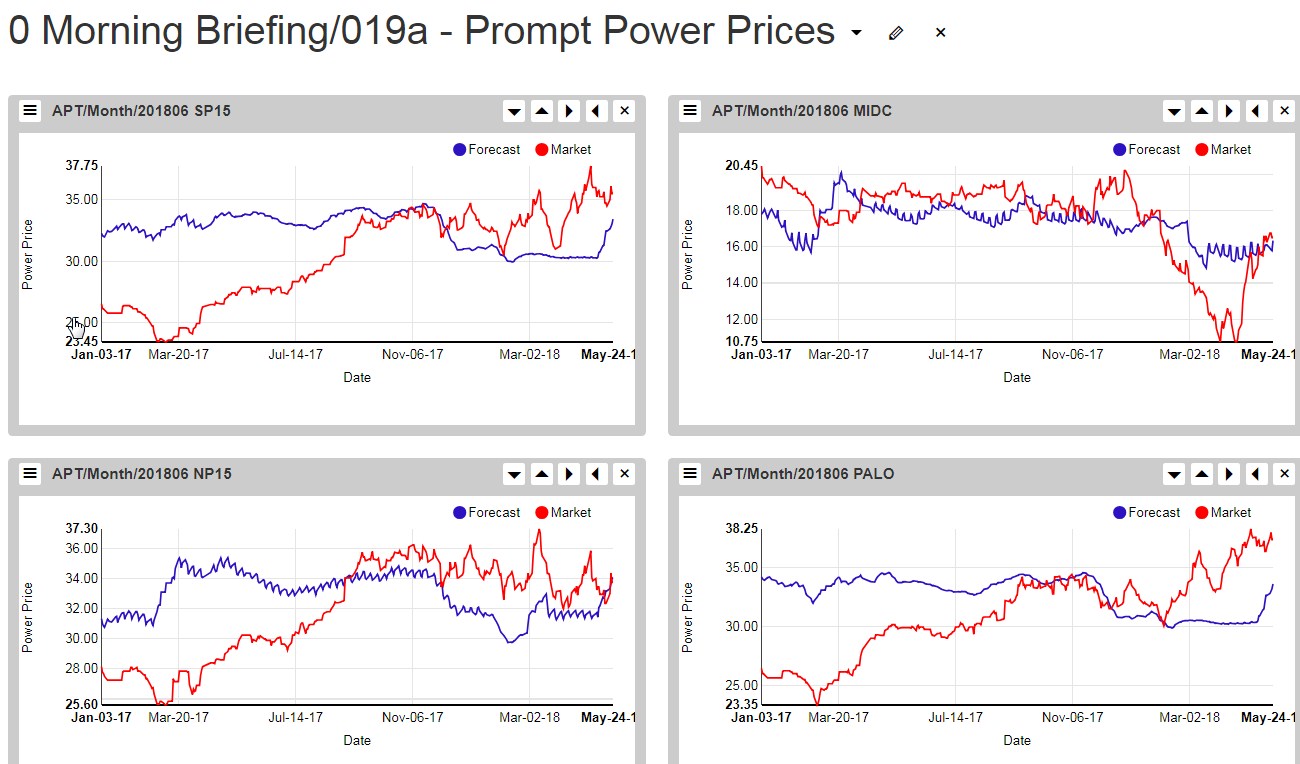 Either weather warms up real soon, or Prompt is going to start looking like BOM: 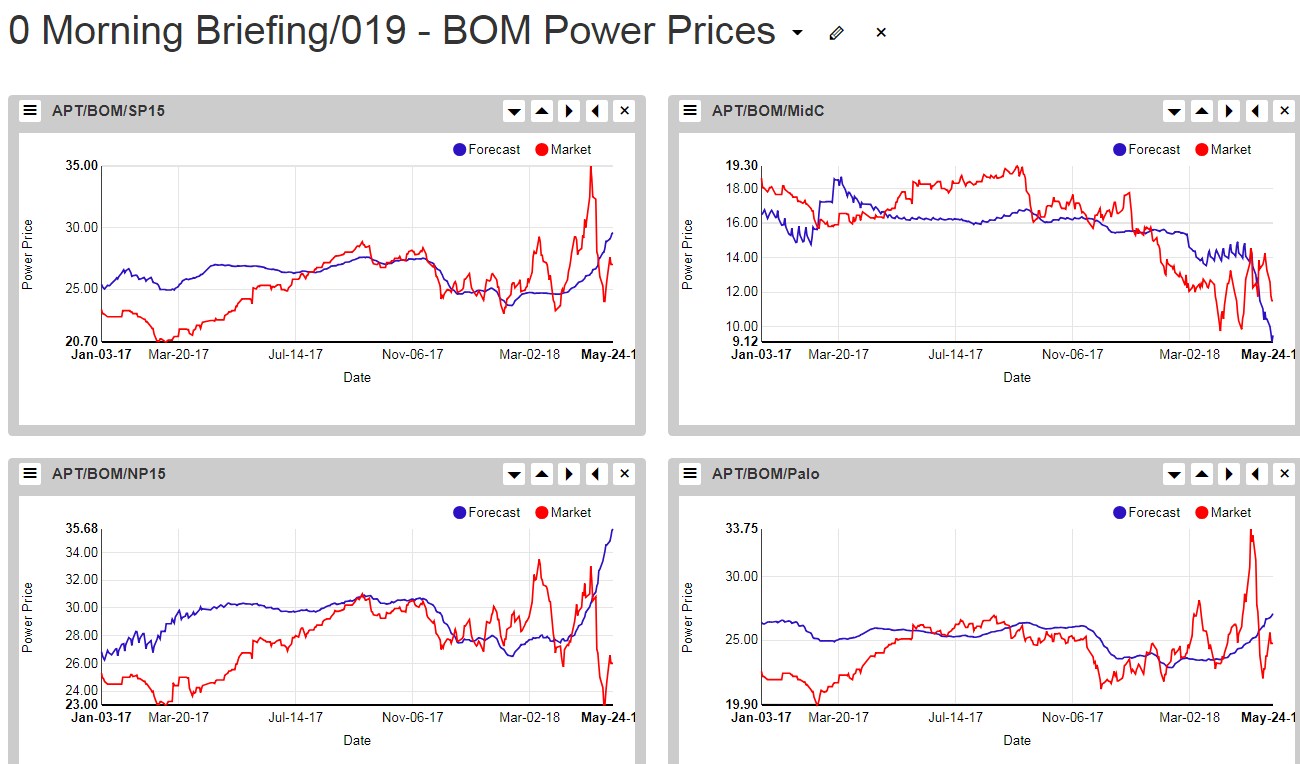 BOM’s been a bust, wouldn’t be surprised to see June do the same given the current weather outlook. Gas remains weak, too: 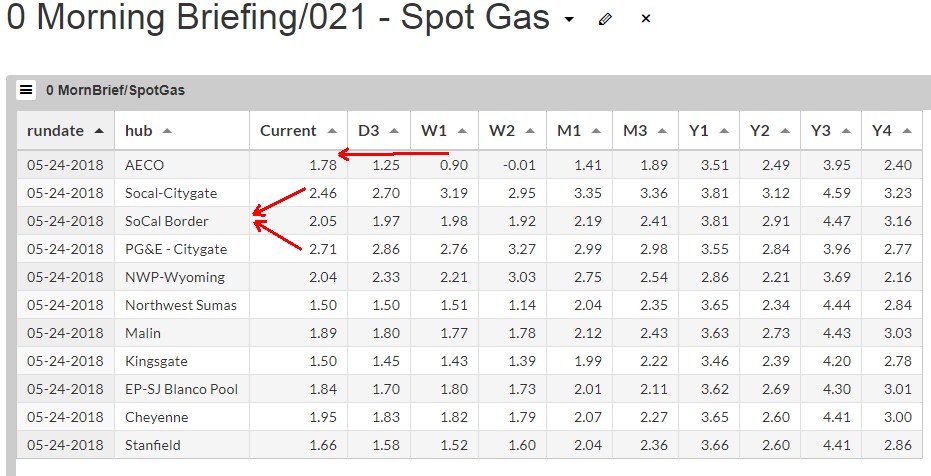 Socal Citygate is clearing beneath PG&E Citygate, but the forwards still have a massive SCG premium. Doubt that holds, not with strong storage injections and weak demand: 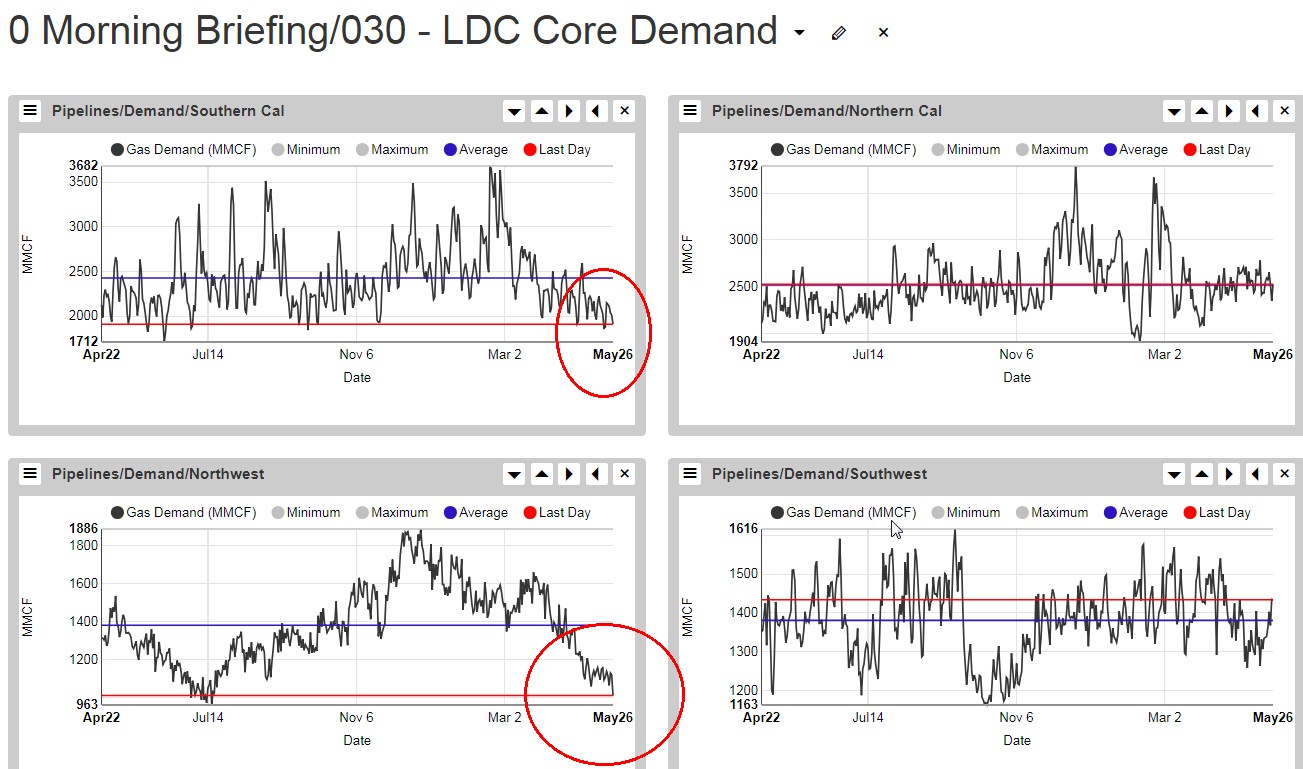 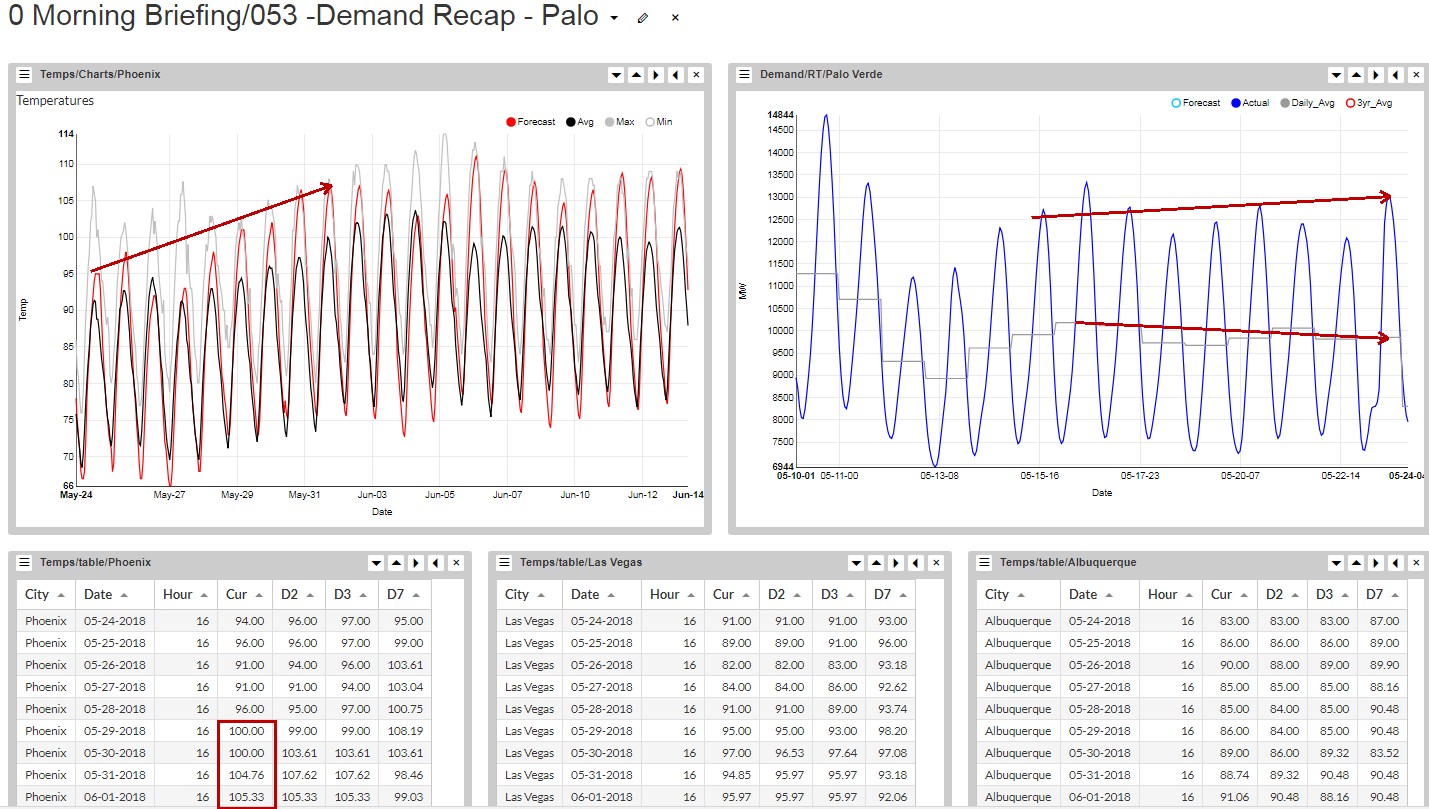 Phoenix is relatively mild today and growing much hotter next week, back to the triple digits. Loads are just sideways. 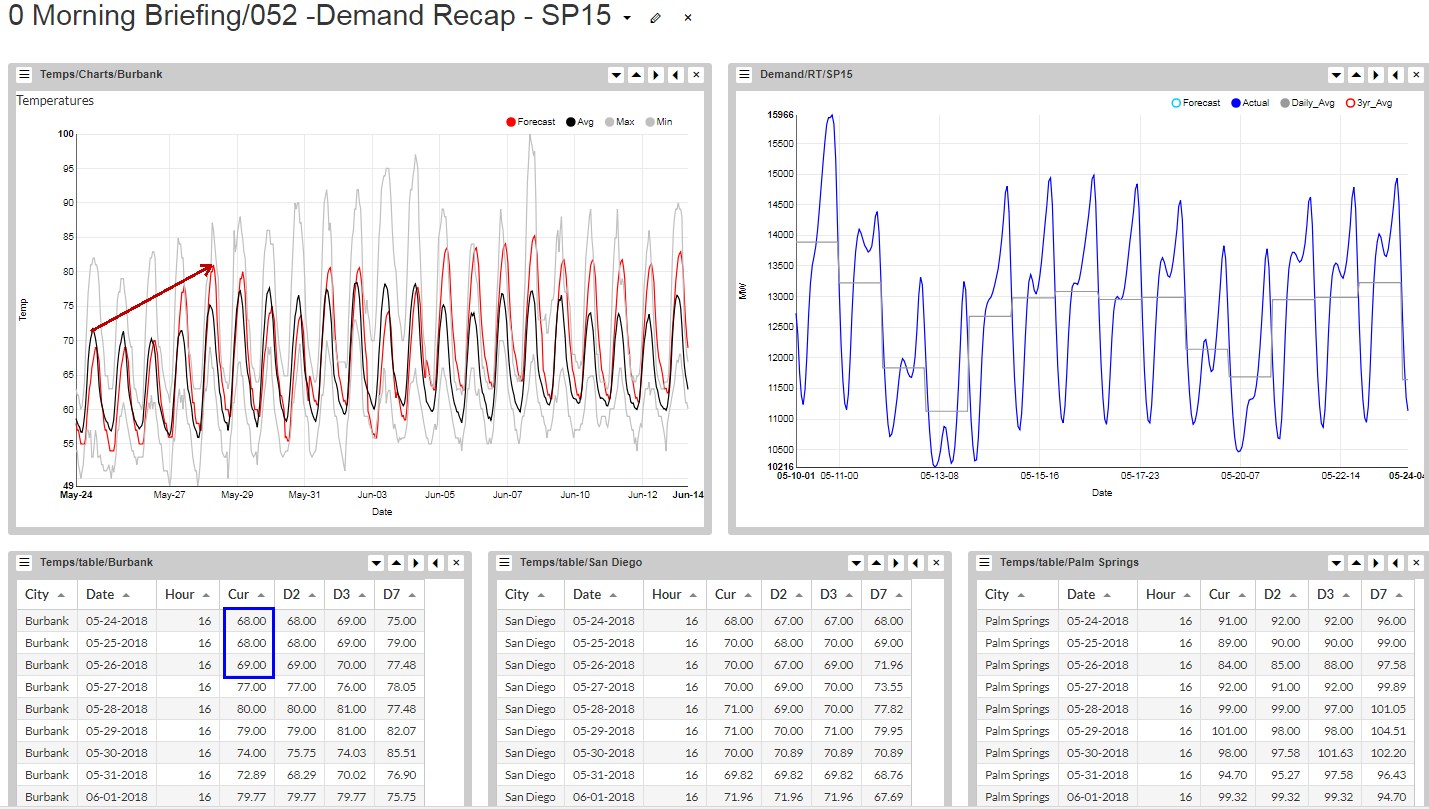 Burbank has basked in the high 60s for most of the week, but hold your breath, next week it will be in the 70s. 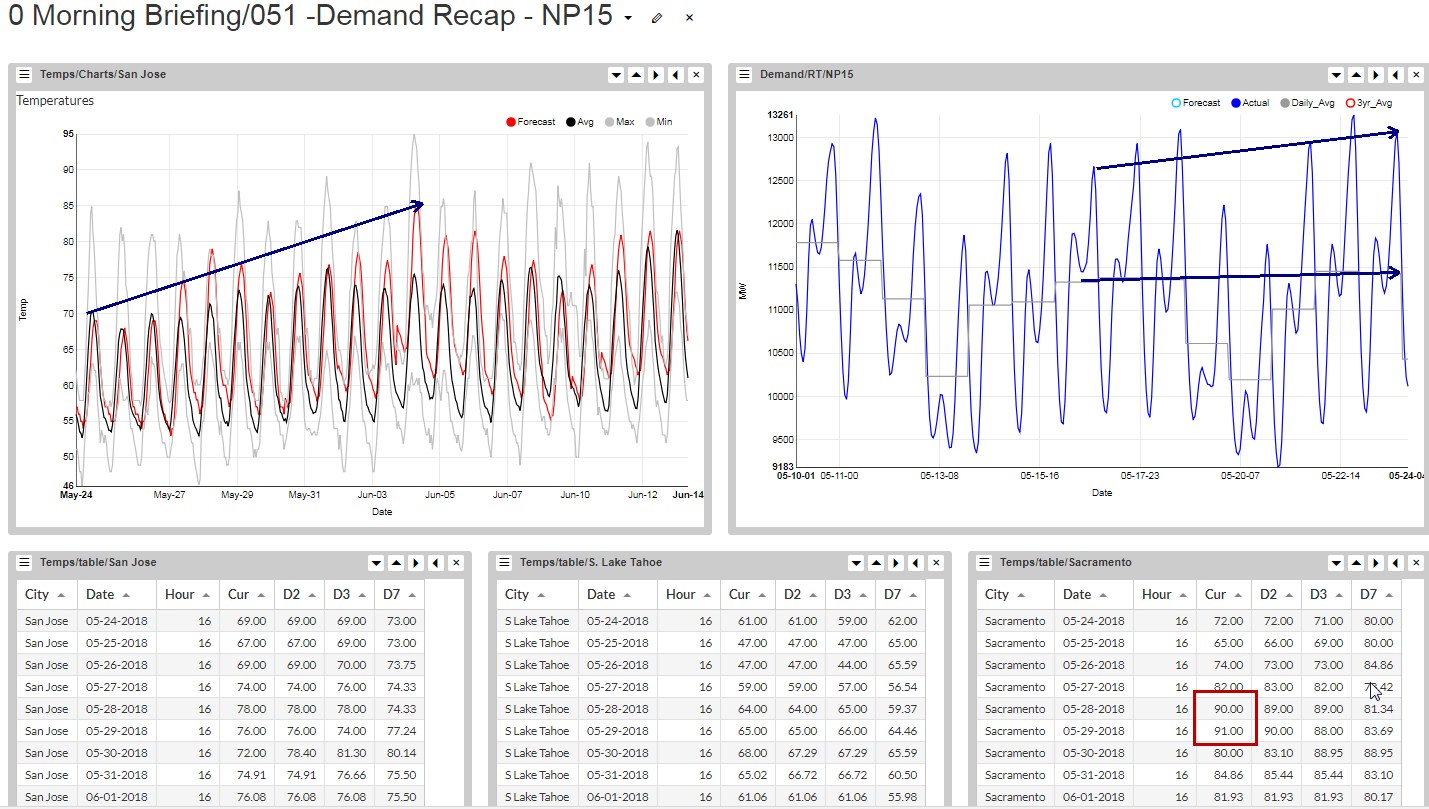 NP’s loads are also sideways, and temperatures will grow warmer, but there is nothing bullish in this forecast. 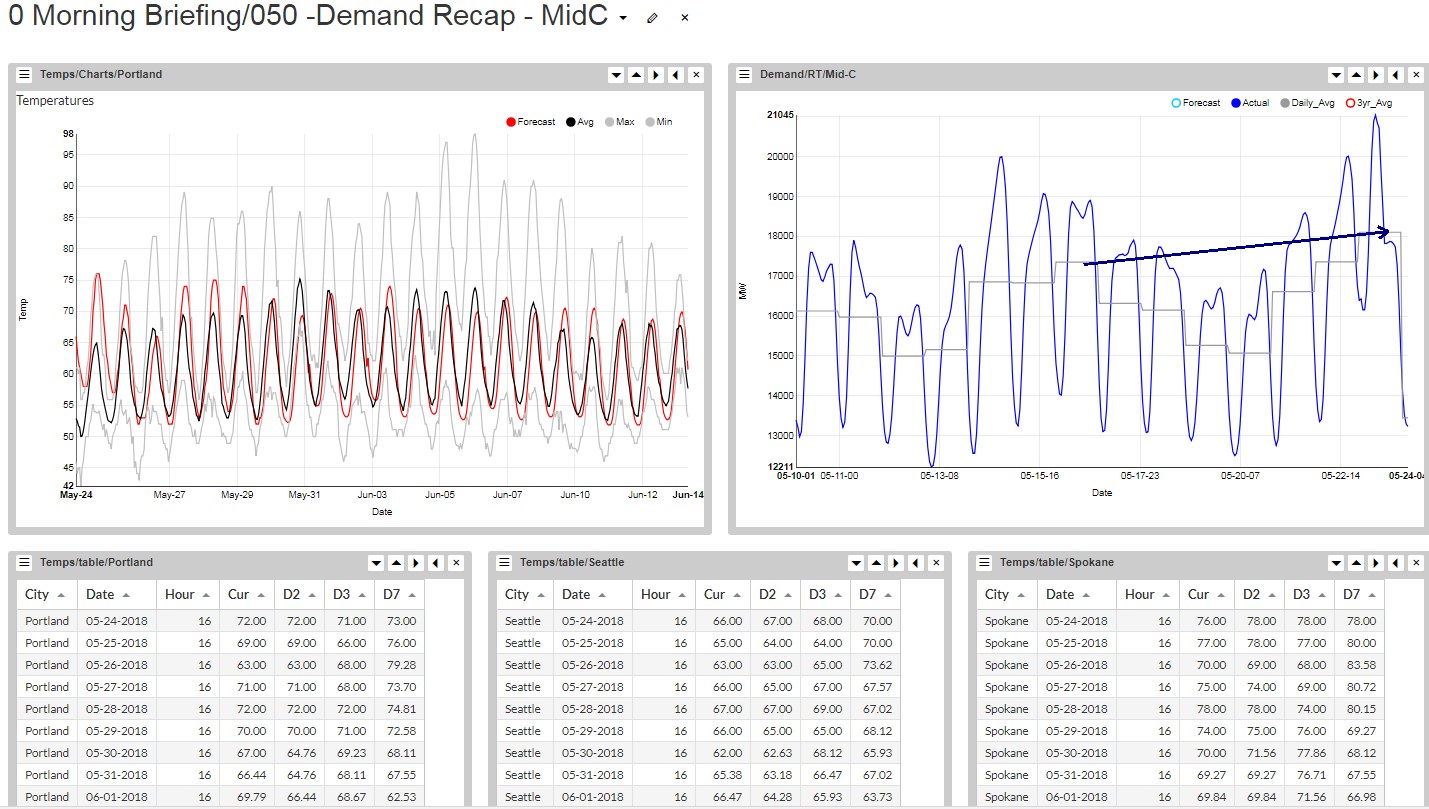 And then there is the Northwest; its outlook is more dismal than all the other WECC hubs. Portland will struggle to hold the 70s, Seattle probably won’t, and whatever snow is up in the mountains will continue to melt.

At least the wind isn’t blowing in the Northwest, that’s helping BPA manipulate its markets. NP’s wind energy is looking more like a base-loaded coal plant. 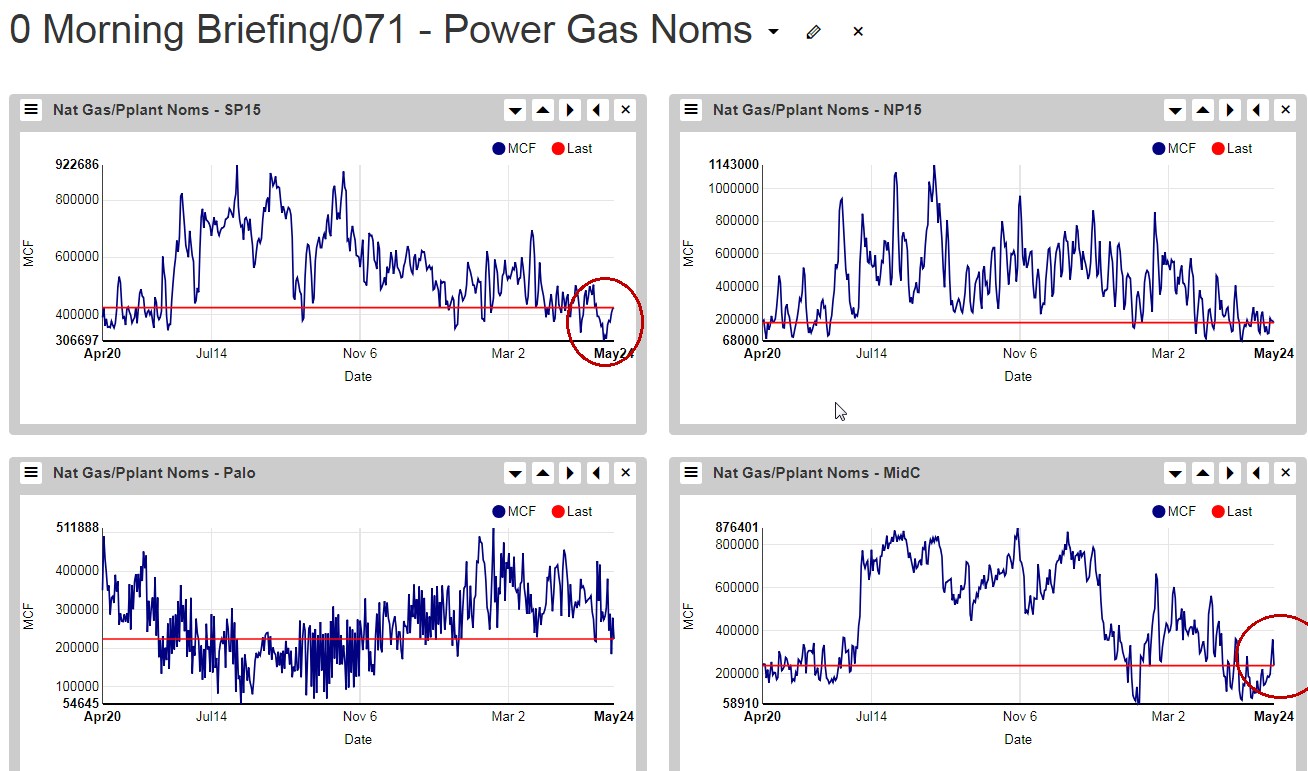 Meanwhile, the water just keeps coming – flows at the border are around 270 kcfs, and the Pend Oreille keeps building now that the lake is full. At least the Spokane is finally backing down. 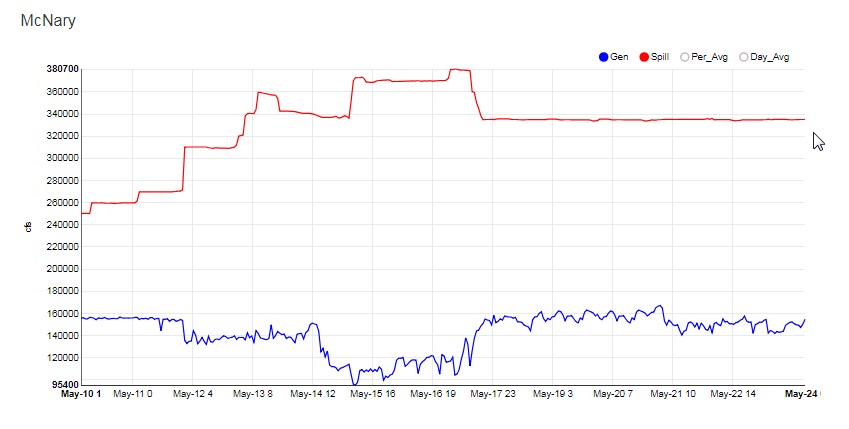 We found this plot interesting; Spill vs Generation at McNary, nearly 3X more of the former than the latter. And that, my friends, is how you keep gas on the margin. 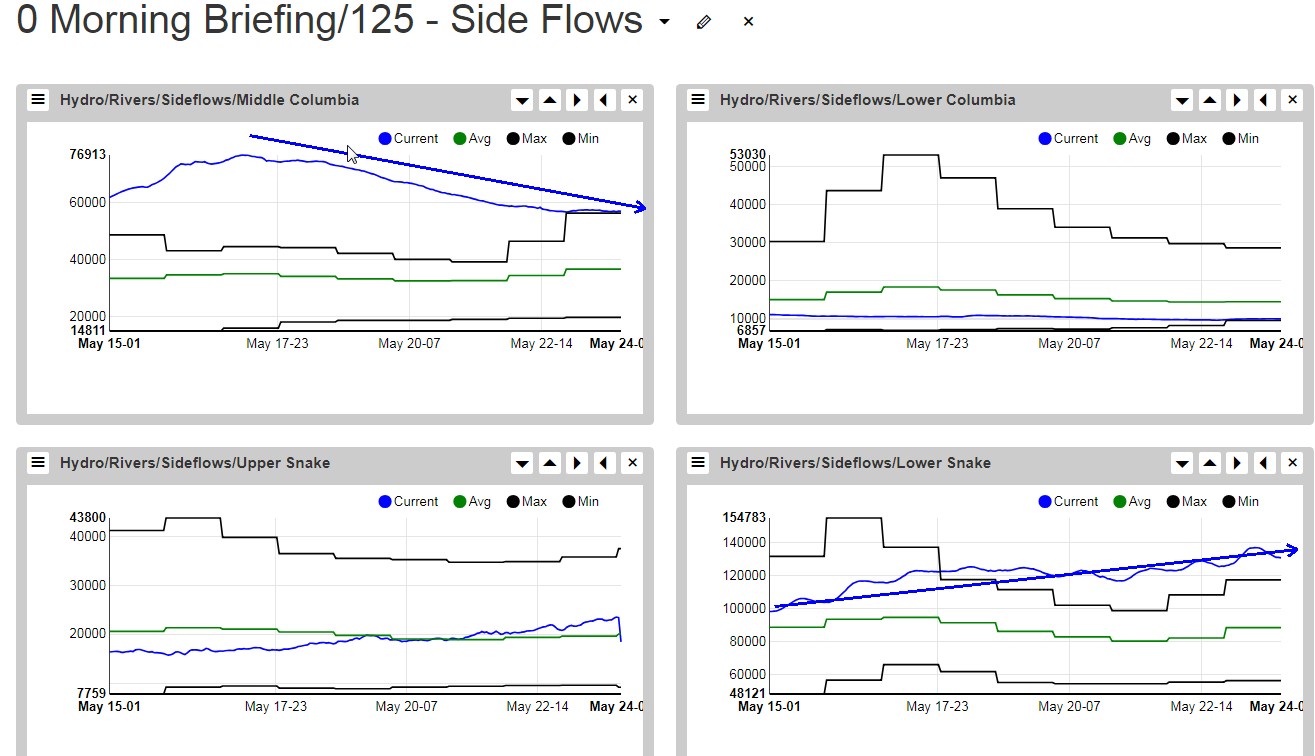 The Middle Columbia side flows are dropping, but the Snake (Salmon + Clearwater) are still building. This party isn’t over just yet and will be still going once June becomes BOM. 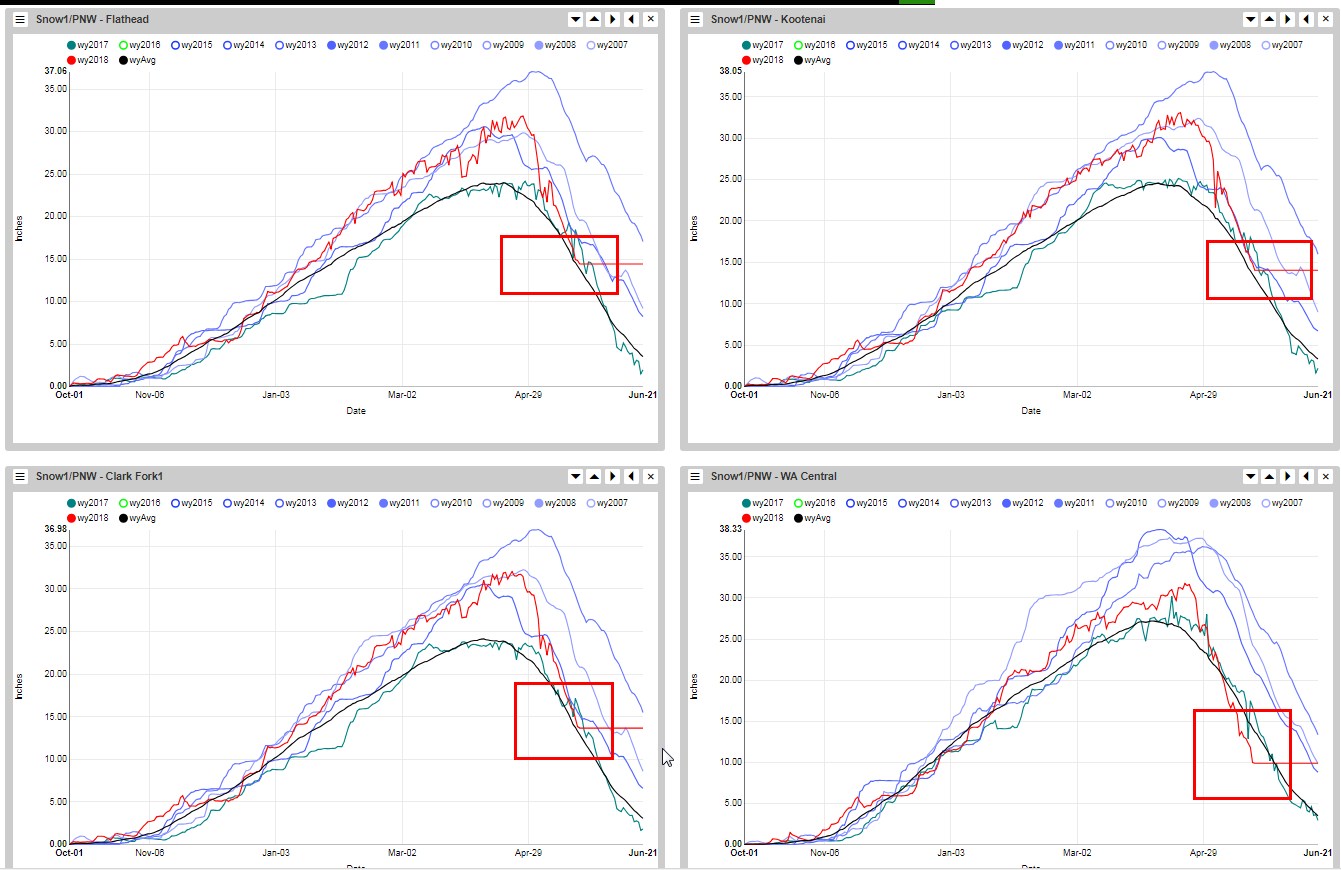 May has been hot and where WY18 had one of the best snowpacks in late April, now it is just average. At least 50% has melted, probably even more than that; now it is only upper-level snow that is left. Interesting, because temperatures are remarkably cooler for the next couple of weeks suggesting that June could see steady melt for most of the month.

The Snake still has snow, too. 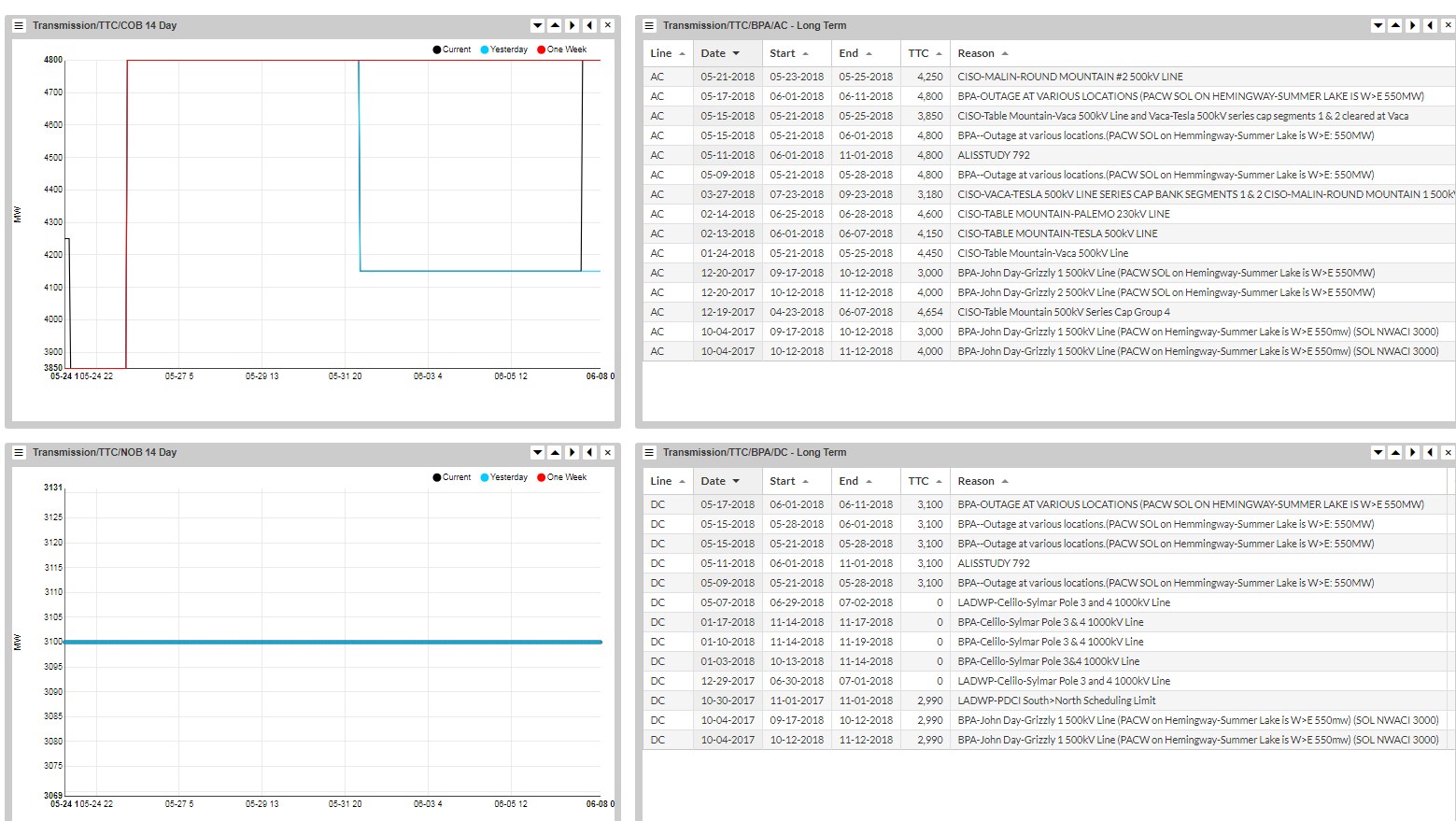 Huge buys on the Northern Intertie, which is surprising given BC’s massive runoff and lack of load and Mid-C cash strength. Also interesting that the AC didn’t fill the line, even with reduced capacity.

Weak weather and strong Northwest hydro suggest a day of reckoning is on its way for June.