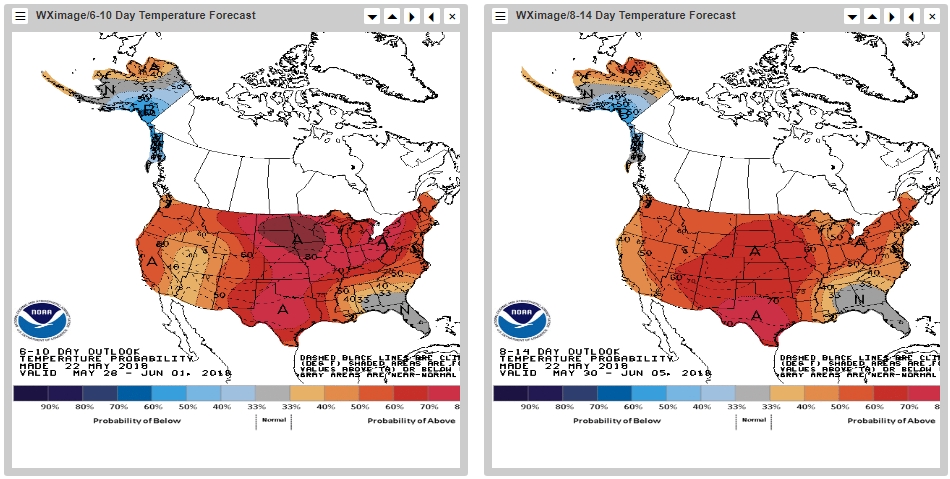 The entire west is pacing above normal though the South West will see the most change from week one to week two as its heat anomaly moves from 33% to 70% (chance of above normal temps).

The Northwest is looking particularly dry while the Rockies may see more precip than normal.  California is pacing normal, which basically means dry as well. 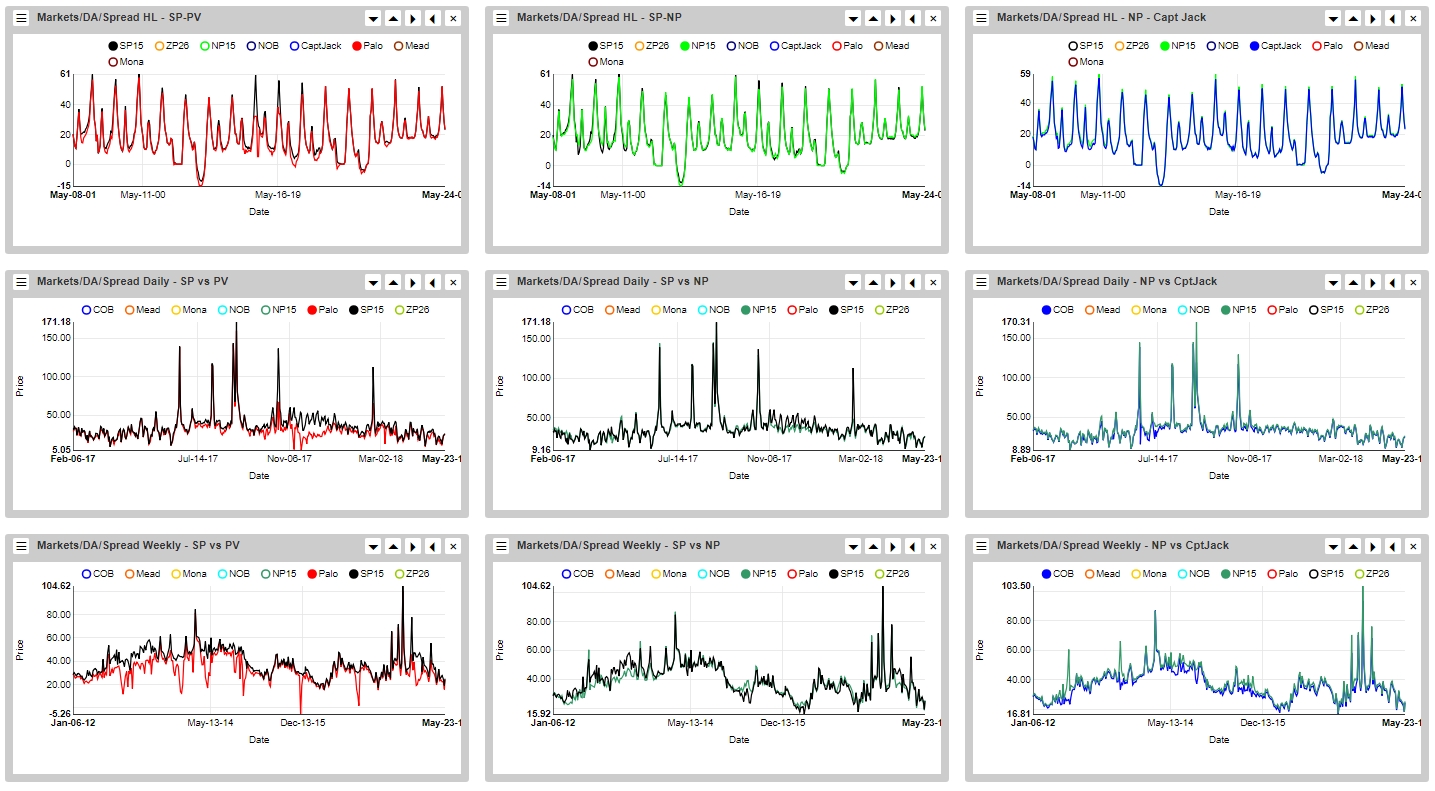 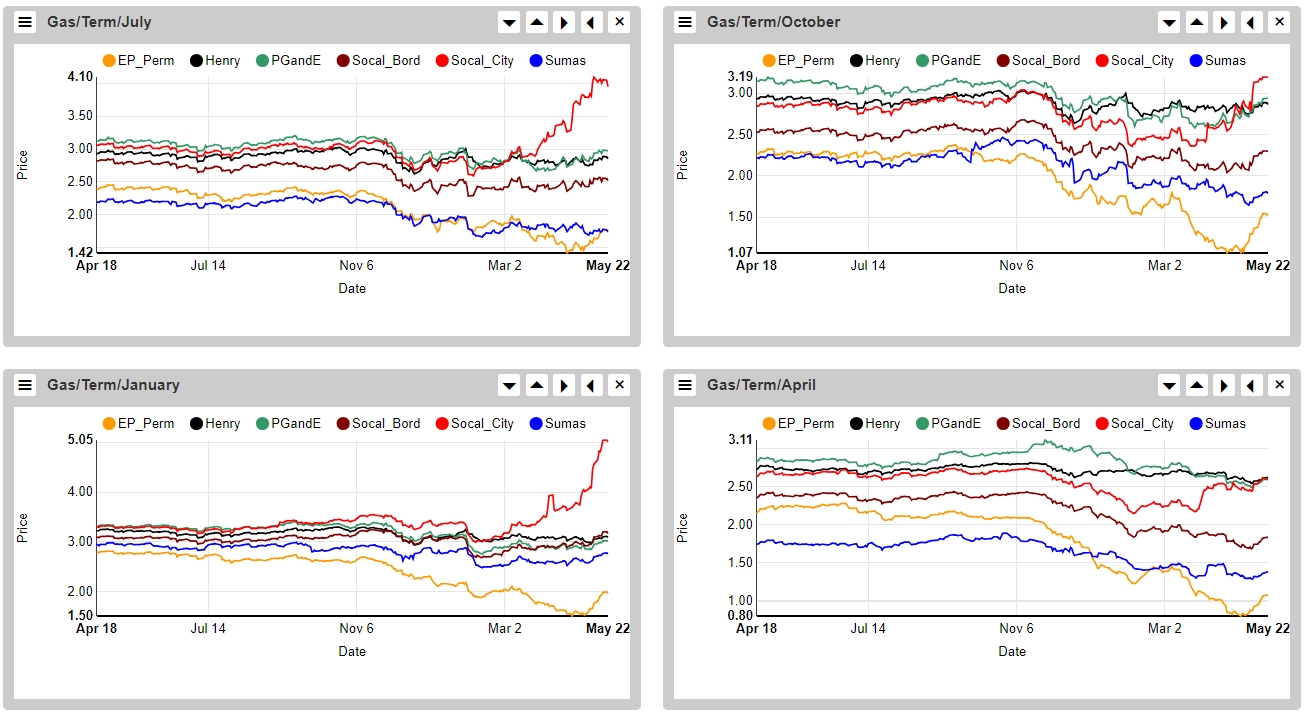 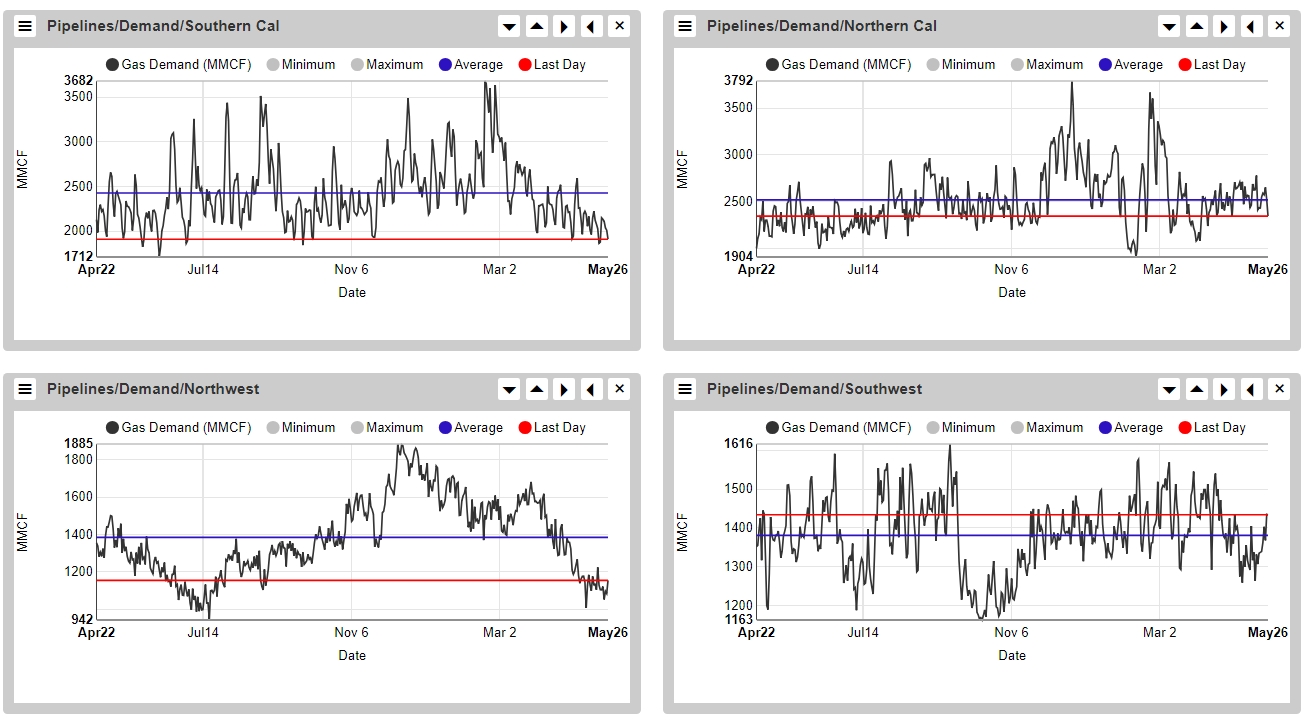 Jackson Prairie storage exploded with an additional 228,718 MCF today, up from an increase of 57,000 yesterday. 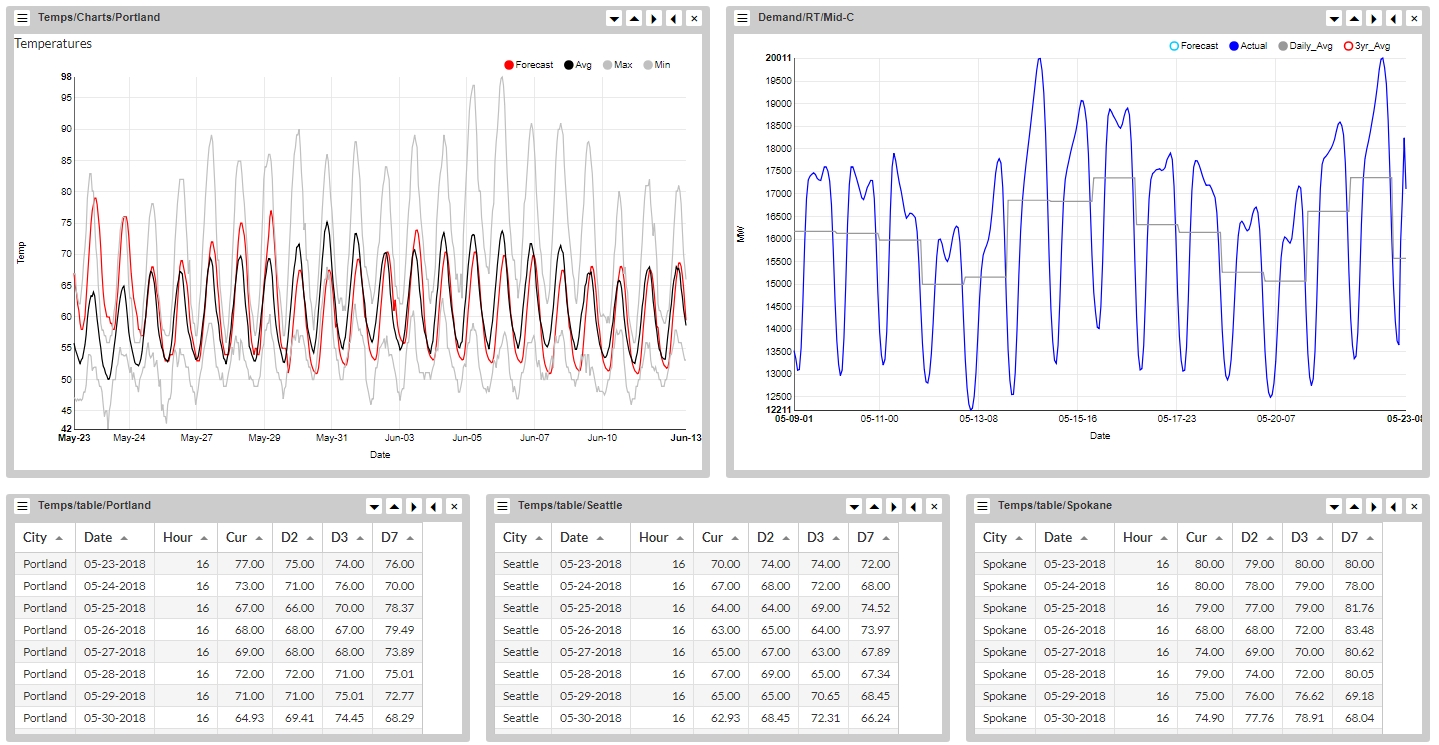 Portland will come dangerously close to 80 today as the forecast checks in at 79, 15 degrees above average.  Seattle will step into the 70’s this week, but nothing close to 80, while Spokane project 80s through the weekend (save Thursday). 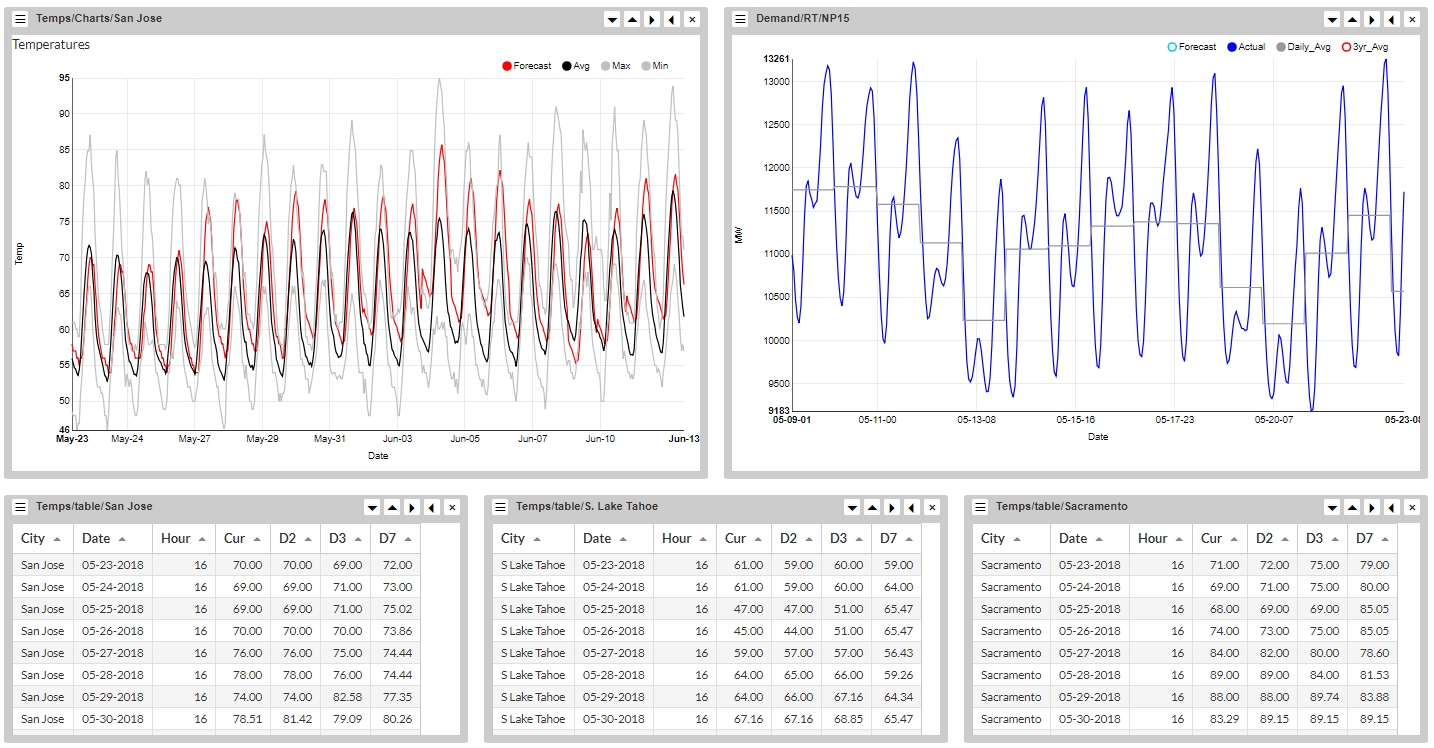 A cool end to this week before a return to the 90’s for Sacramento and high 70’s for San Jose.  The 28th stands out with the warmest temps (93) for Sacramento. 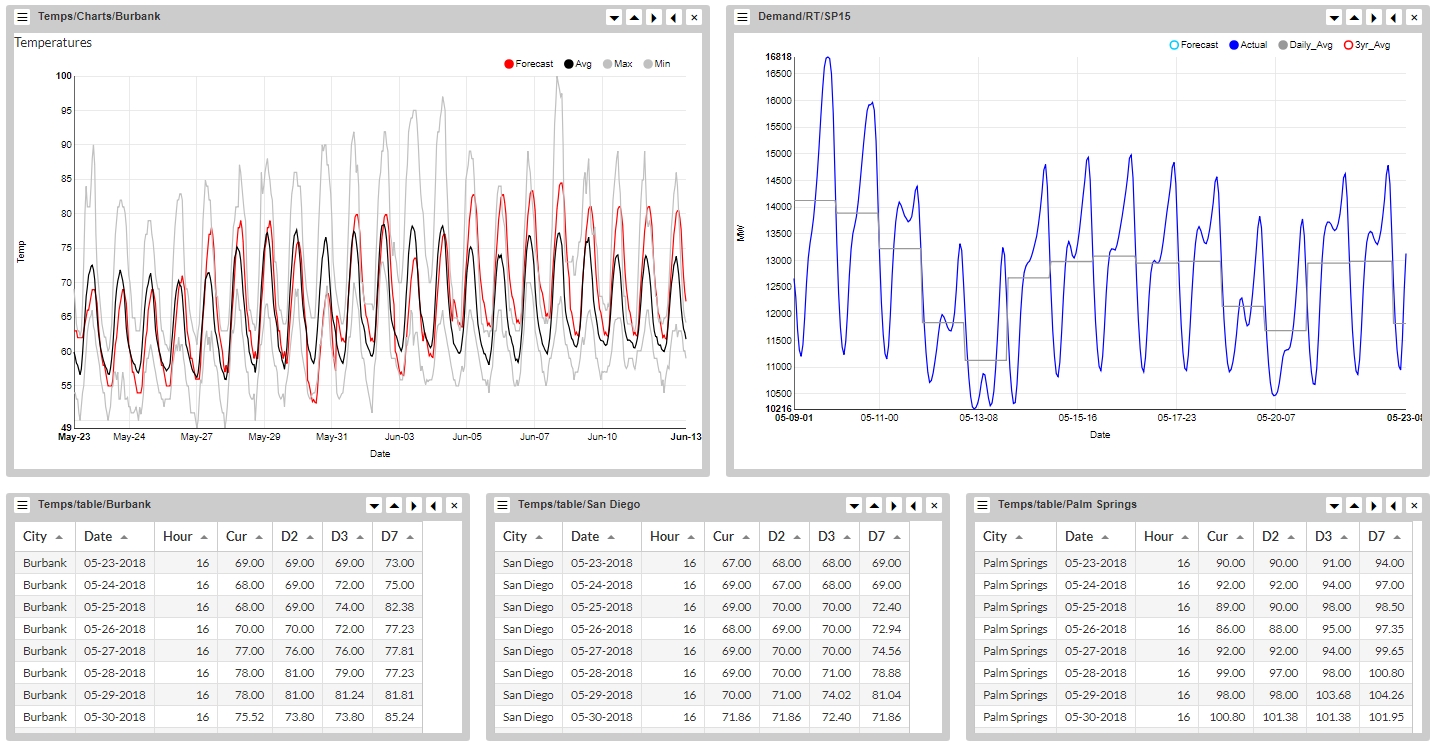 Burbank is projecting highs in the 70’s through the remainder of the month as 80’s don’t show up until the 1st of June.  The second week of June is showing sign of a moderate warm up with upper 80’s. 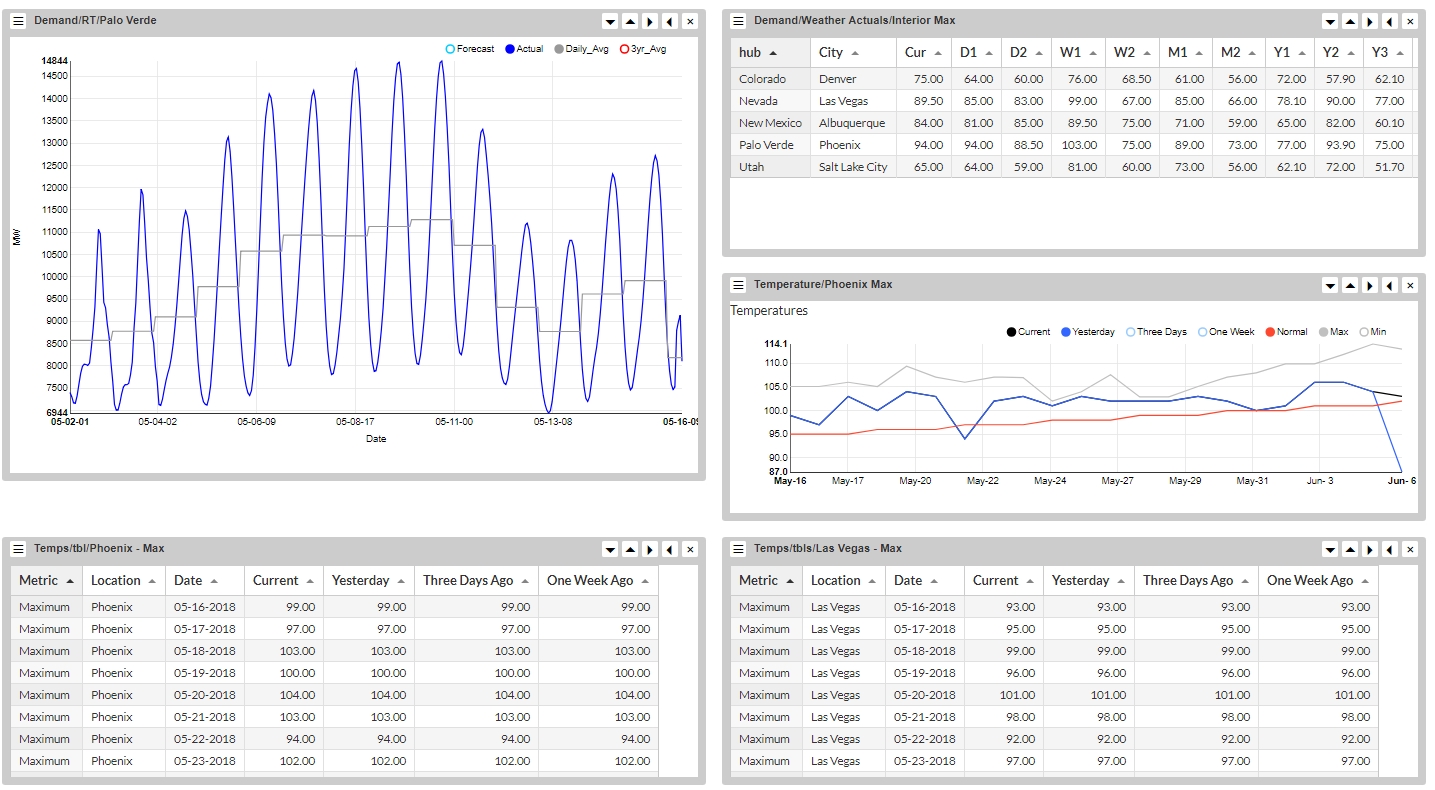 Phoenix checks in with a high of 92 today, but 99 and 98 to round out the work week.  Keep an eye on late next week as the 31st shows temps peaking at 110, four degrees higher than the previous 10-year high, and 13 above the daily average. 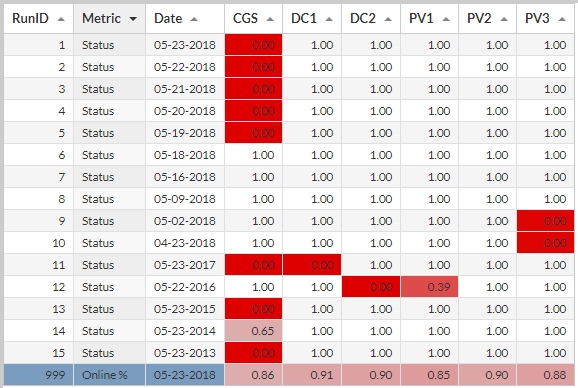 Columbia Generating Station checks in with its fifth-consecutive day at 0%. 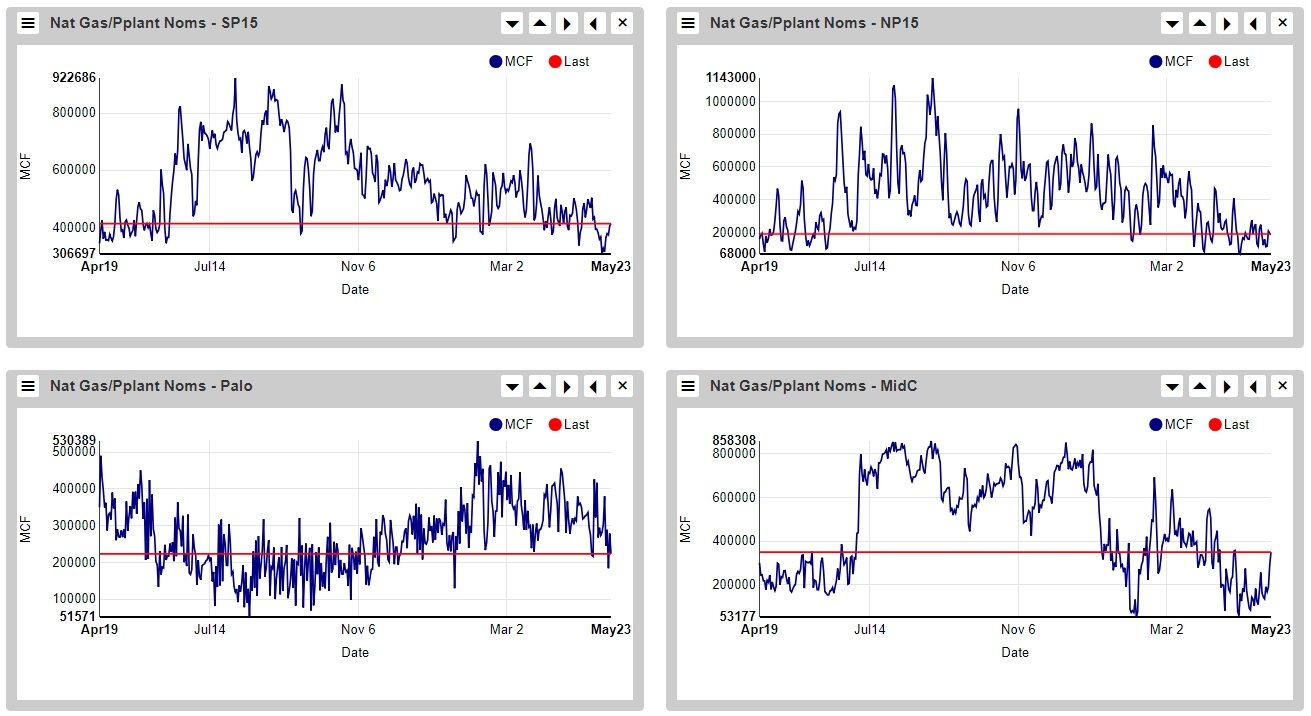 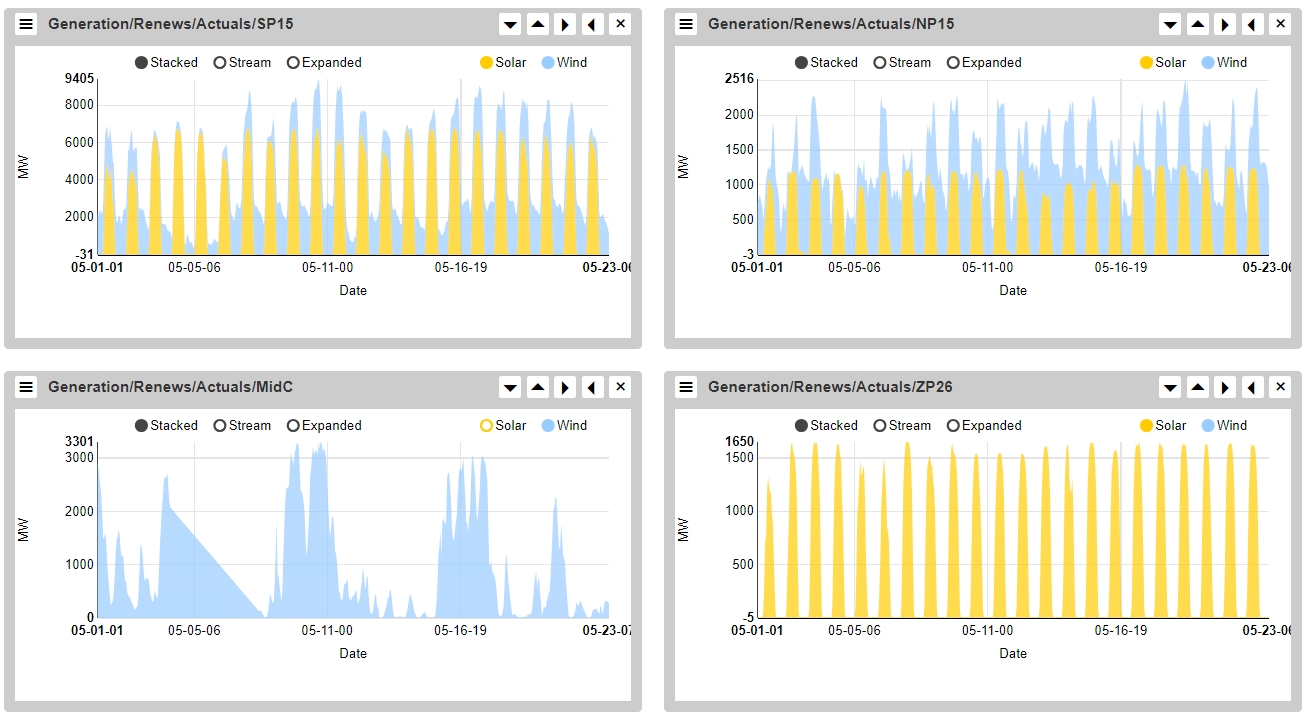 SP wind disappeared yesterday with just 2,209 MW during its peak, down from 2,677 the day before and down from 3,197 at the week’s highest point.  Solar tacked on an additional 300 MW compared to Monday, making up part of the renewable loss. 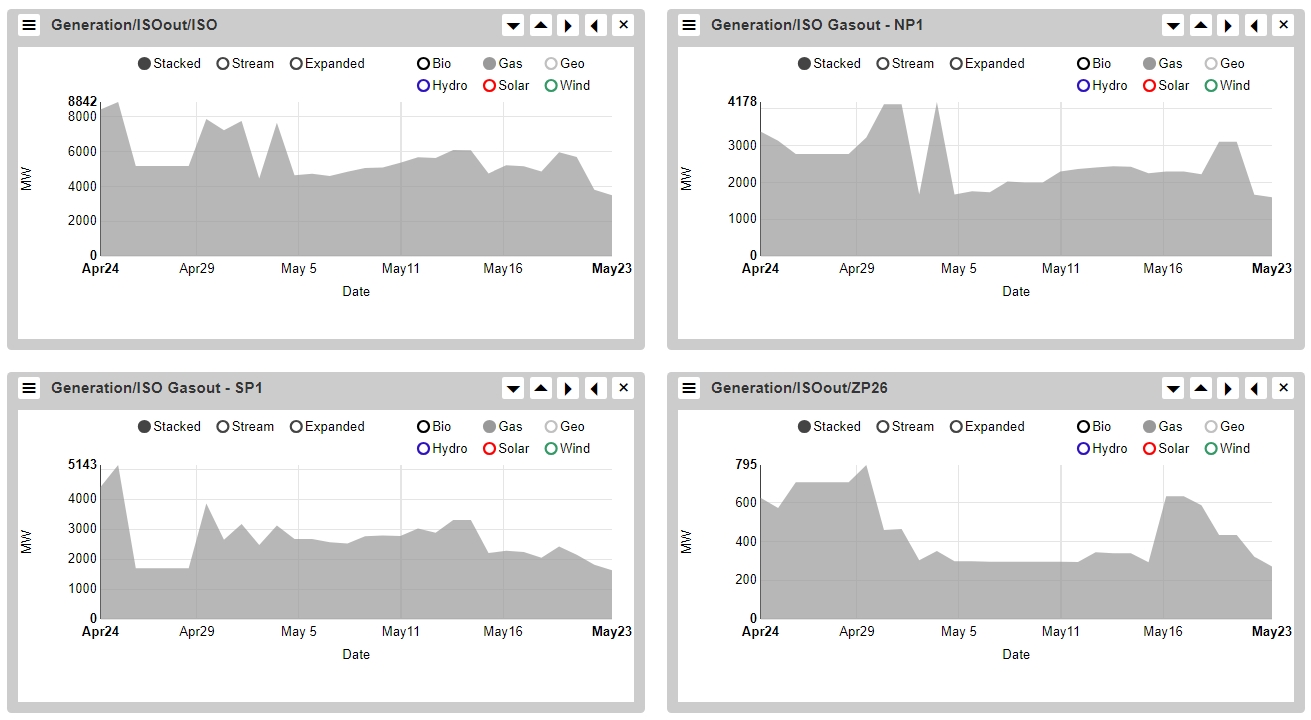 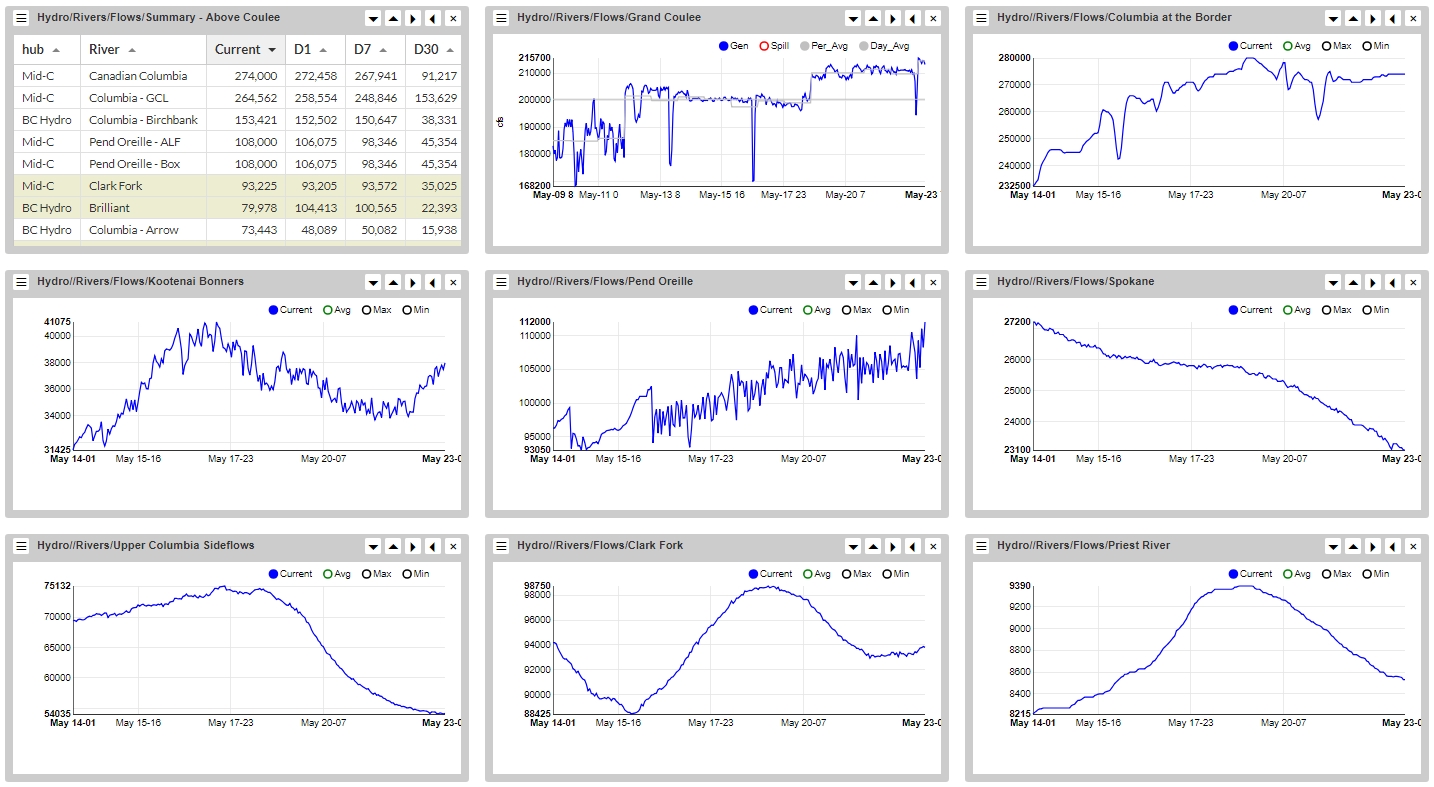 With 112,000 CFS, Pend Oreille checks in at its second-highest level of the decade and just 3,000 off from the 10-year high.  We’ll check in again on Friday to see if these consecutive days of 80-degree temps is enough to tip the scale. 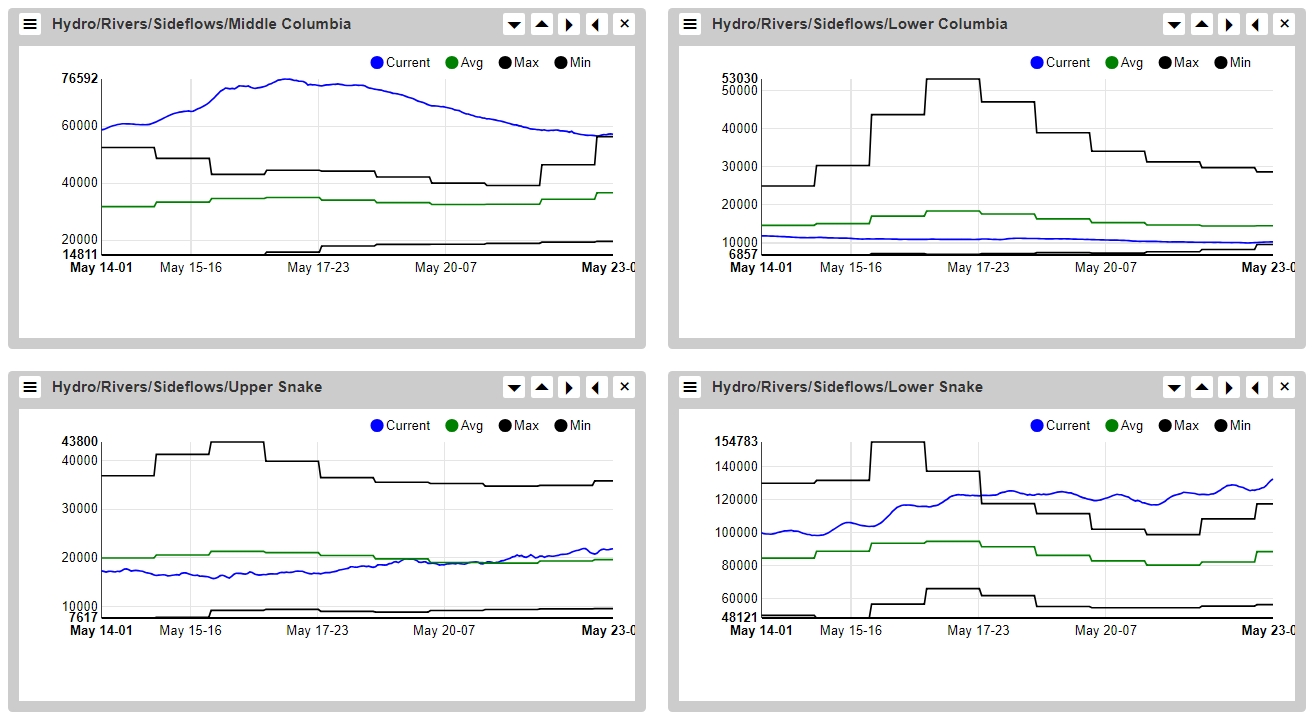 Albeni Falls is holding steady at 2,053 ft after marking that level on the 20th.  The four other reservoirs are increasing with a decent slope.

Montana is holding to torch for above-average snow anomalies as everything south of the Washington falls below 50% of normal.  The Clark Fork still has plenty of fuel left to push the Pend Oreille above 10-year highs. 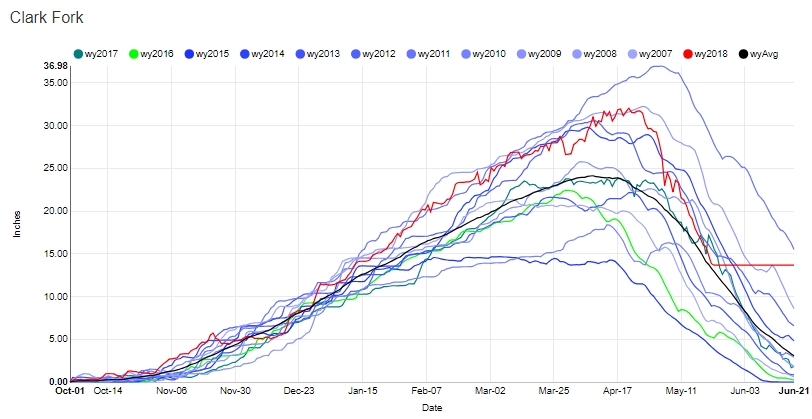 It’s just a hair above average, but there is still a non-trivial amount of snow waiting to melt.

STP still sits well above the 10-day forecast though the difference is diminished as we move toward the back-end.  Today’s difference checks in 200 aMW higher than the 10-Day.

BPA-COI shows an increase of 400 MW in TTC from 10 AM to Midnight today.

APT suggests a buy with a strong sentiment as the market is at a near-low while the forecast suggest a higher settle.

You’d be in the money if you bought at the first strong sentiment in the past couple weeks (on the 18th).

Every trade has a PID (product ID) that can be called within the APT History table linked above, the one depicted is PID 642.  Hindsight is 20/20, but this at least gives you an idea of how often the recommendation has been correct.