We’d love to be the harbinger of good news, but we’re not going to do that today. There is little bullish news to report, at least for this week, though there are signs of everything firming up in a few weeks, even the MidC.

Even that hub, buried in the mountain of snow that it was, is showing signs of firming up. When? Well, don’t hold your breath, it won’t happen in BOM, but sometime in June our models are forecasting strong gas on the margin, specifically around June 16:

Meanwhile, the hub is buried in water, and if wasn’t for those spill gates, MidC  would be trading negative prices.

Speaking of prices, we saw the ISO’s Day Ahead markets  firm up:

It is shocking that COB traded only $1.00 of congestion to NP15 in the Light Load and Grand Coulee dam discharged 210kcfs through its turbines – that is the paradigm shift.

And BOM also ticked up across all four hubs: 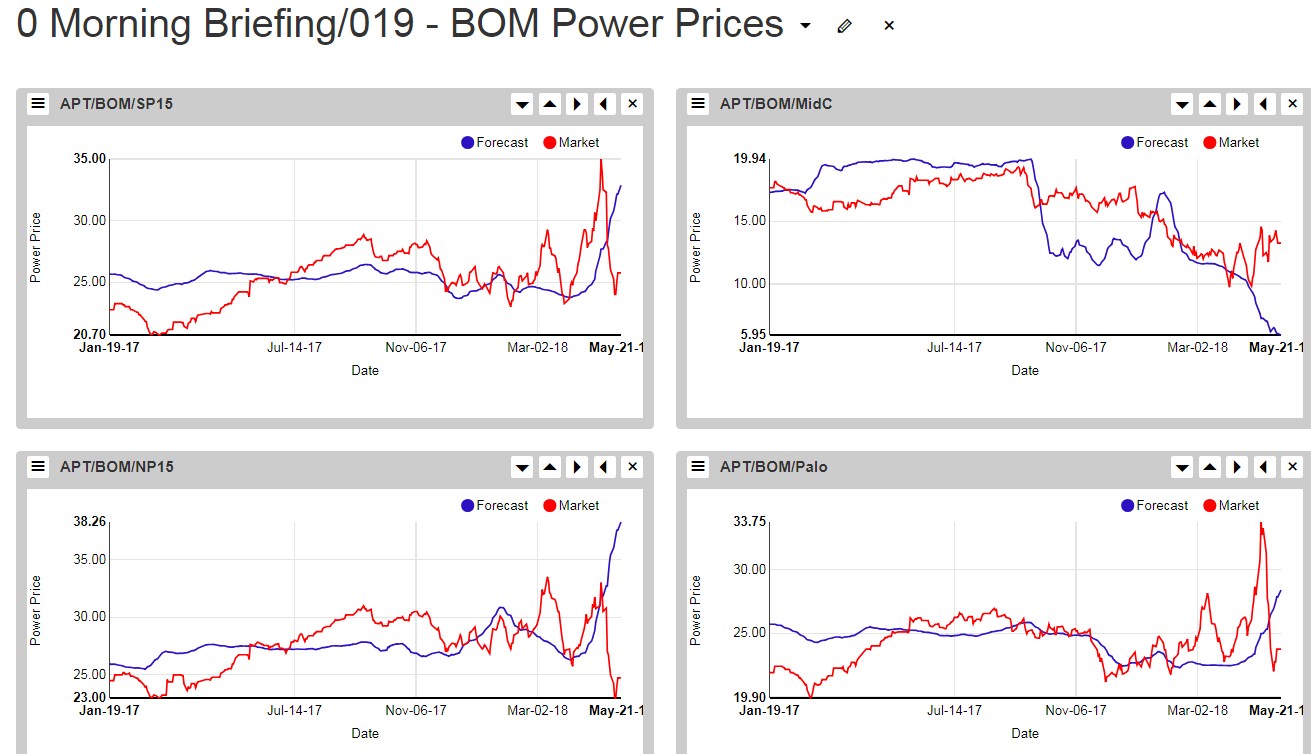 Well, “tick up” might be generous, but at least the death spiral in May power has stopped. What a nasty plunge it was. 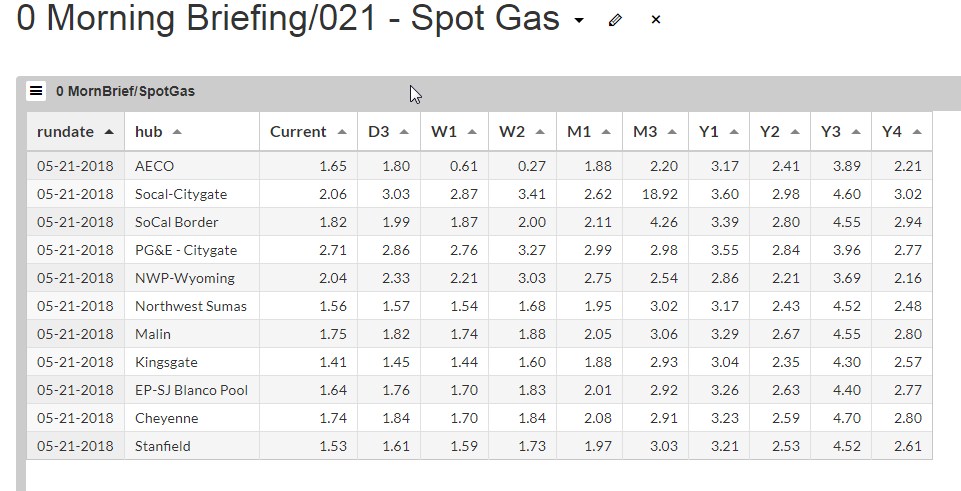 Typical weak weekend prices at Socal, note Citygate traded $.70 underneath PG&E, but once we get Monday’s prices, we expect SCG to trade premium. The term premiums are other-worldly: 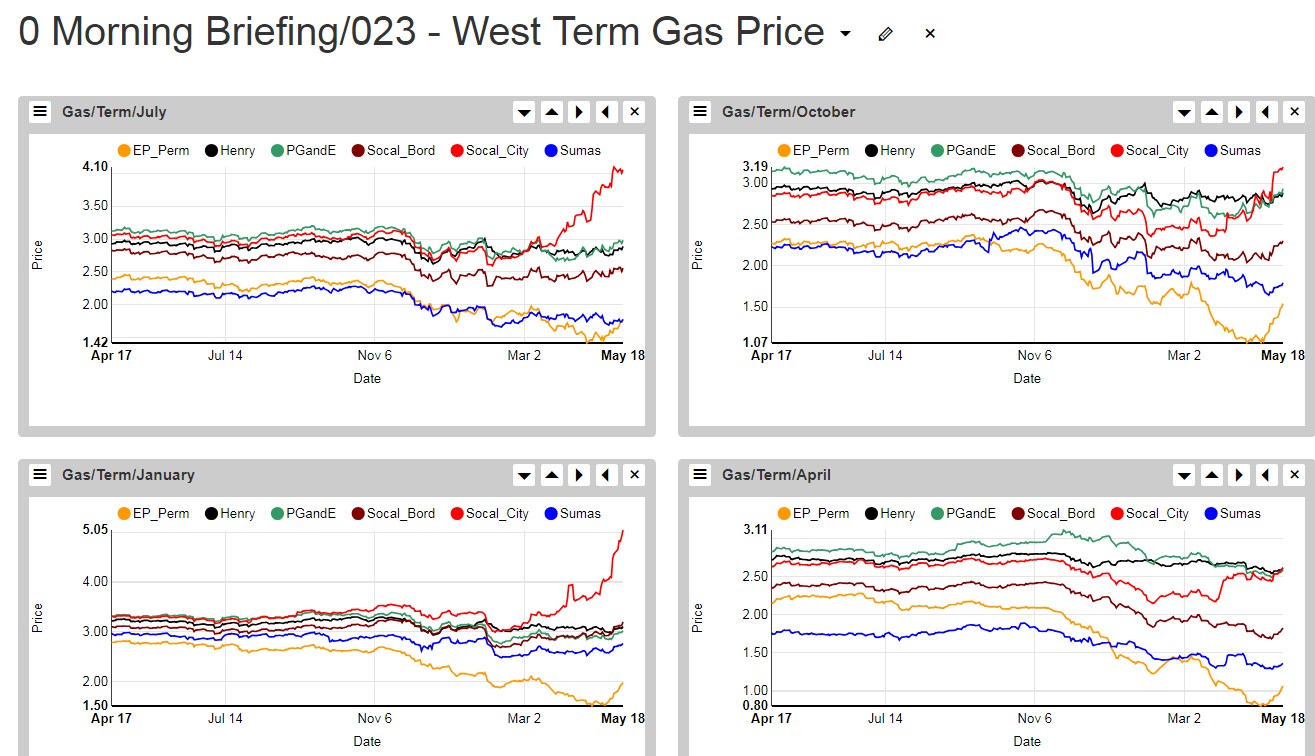 Check out the Dec:

Lofty levels, will they hold once we get there? Just depends on how cold LA gets; if its warm, all of that rally will be stripped away. Seems like a risky bet on a 1 or 2 or 3 standard deviation event. Meanwhile, those high Citygate prices are wreaking havoc on all of the SP-related derivatives – more on that in the next post. 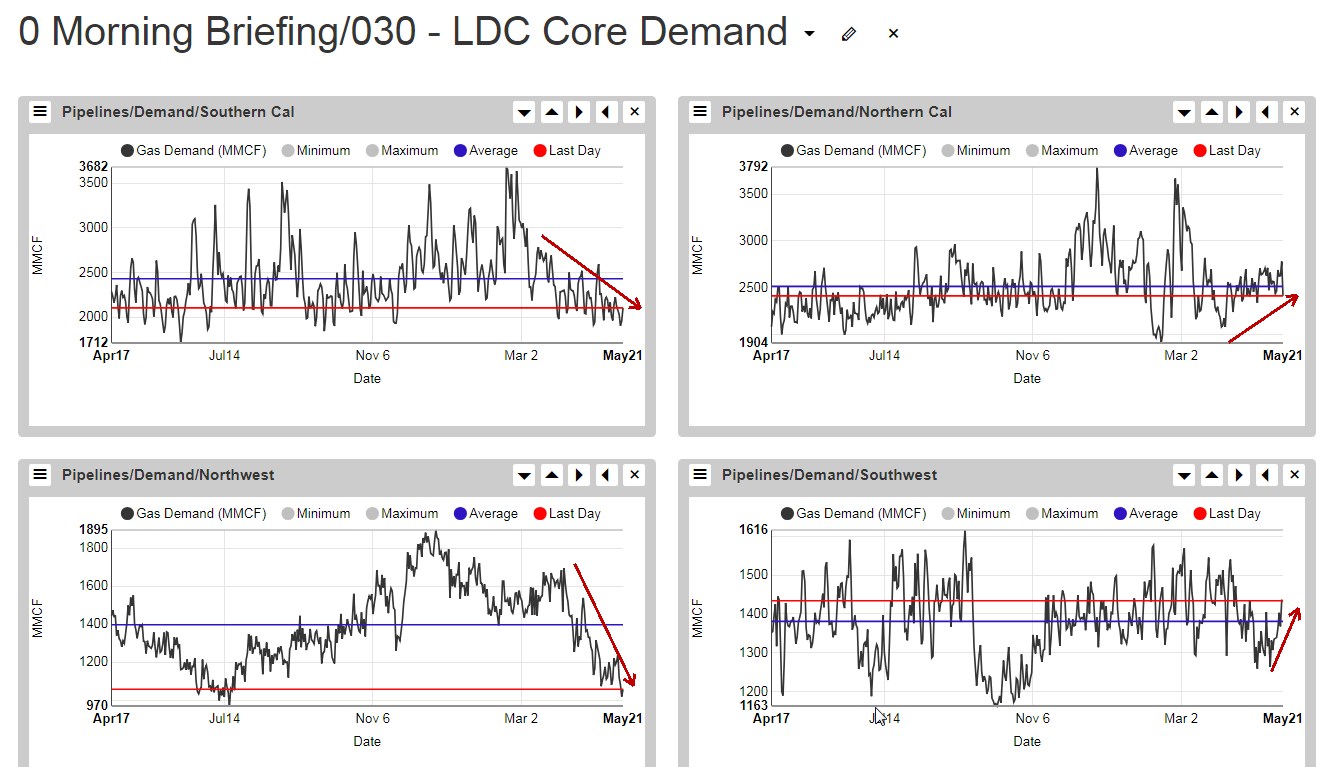 The Ansergy Gas Demand Indexes are a mix  – SP and MidC are off; NP and the Interior are up. 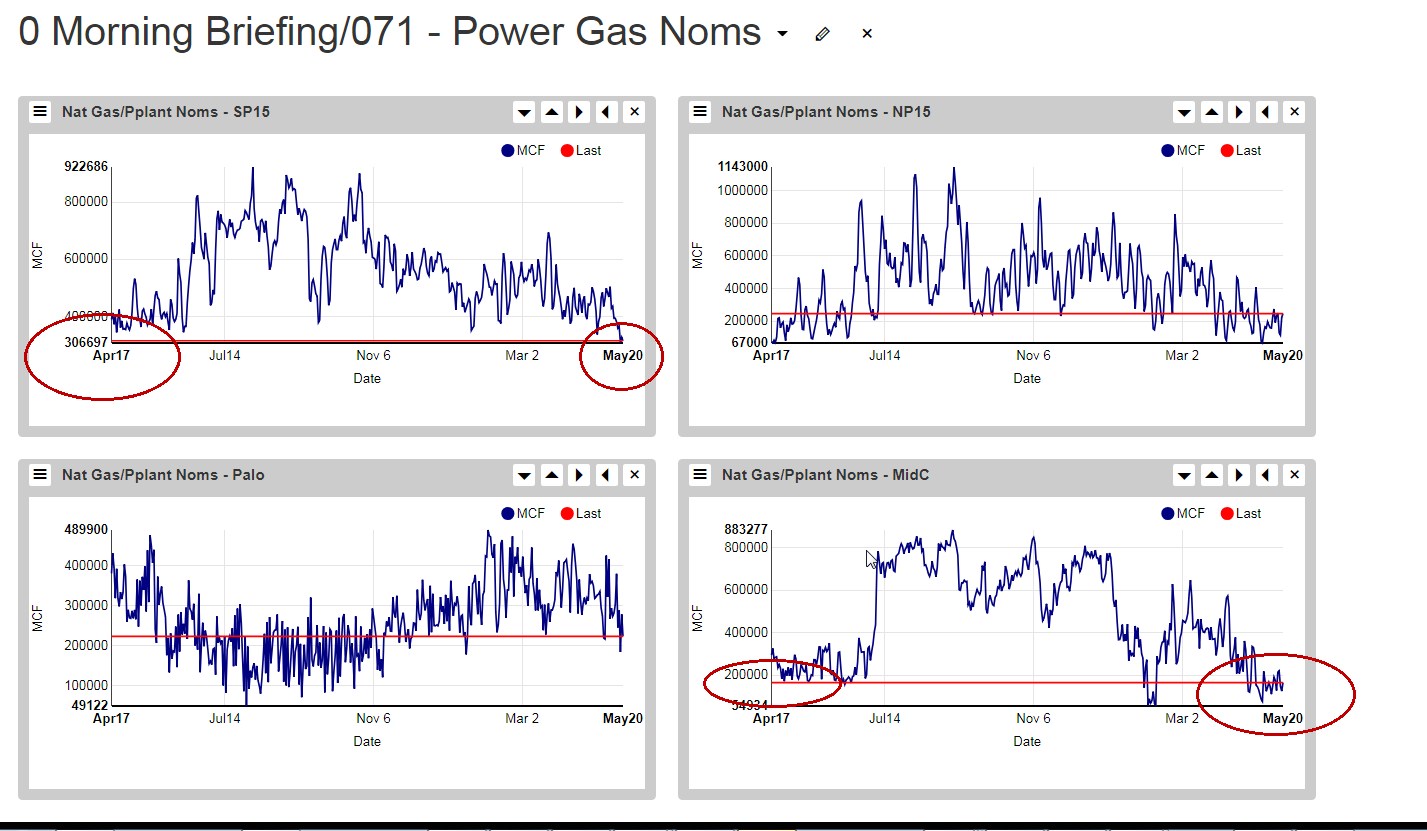 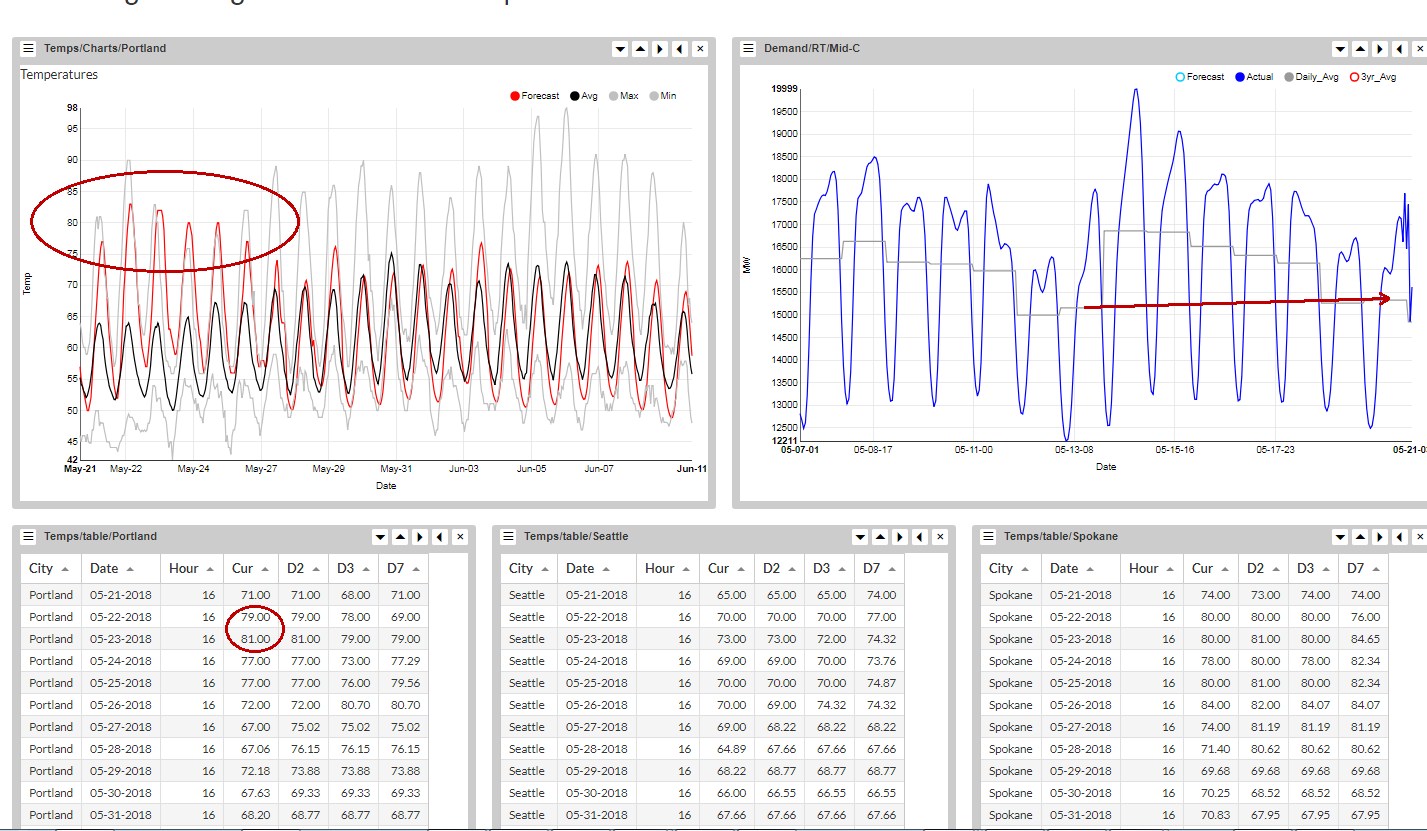 Portland warms up and may set some 15-year highs this week. Weekend loads were sideways when compared to last week.

NOTE: I have modified the Demand Recap reports by dropping Actual Temperatures, replacing the old temperature forecast reports with the new version. And adding the forward forecast for three cities. 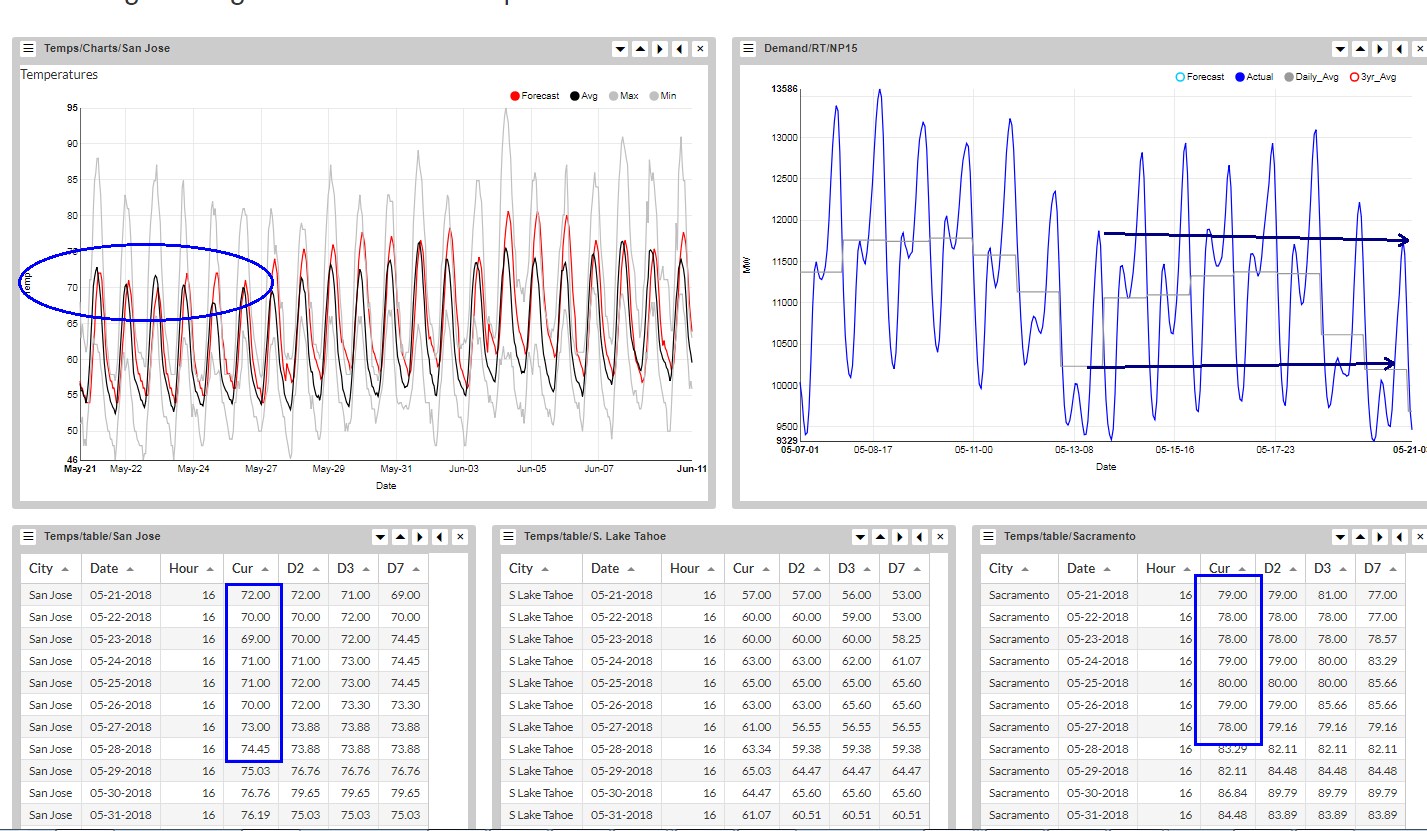 Check out San Jose’s deviations to high – not even close. Loads are sideways since temperatures are mild; forward-looking temperatures are also mild. Overall, this is a bearish forecast. You wouldn’t guess that by looking at NOAA: 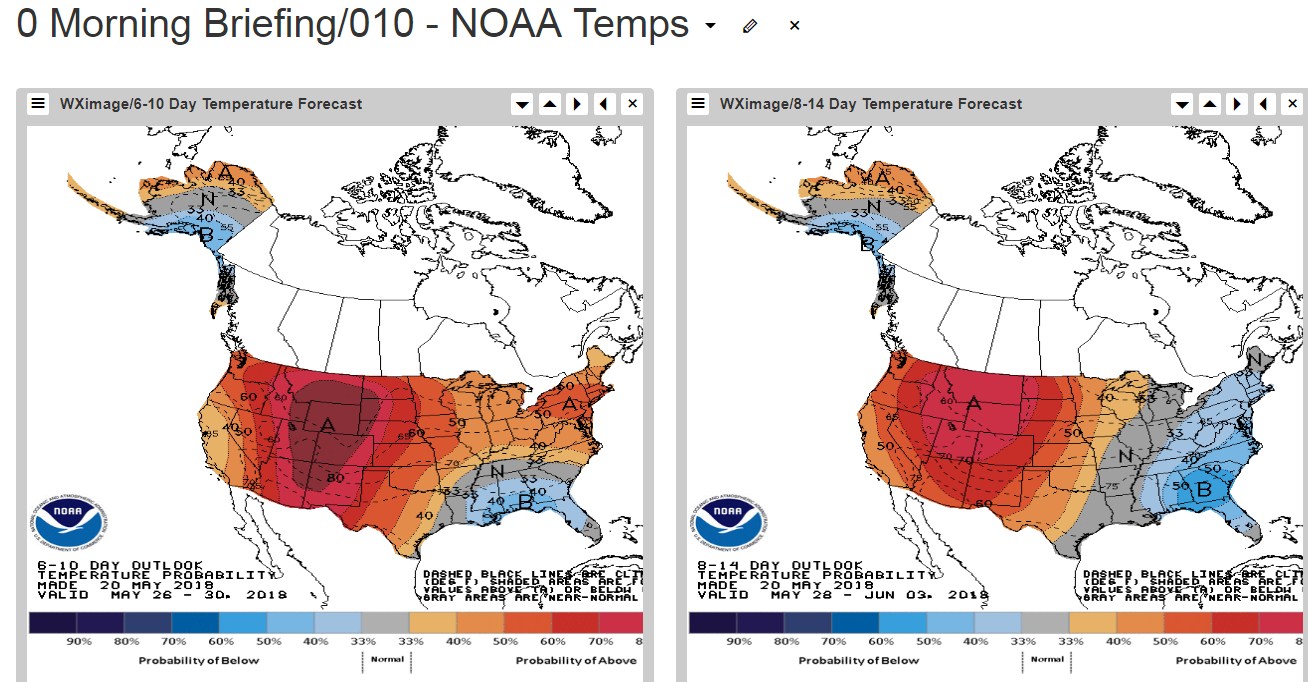 You’d be wrong; the heat is in the interior, the load-center coastal cities are just mild. 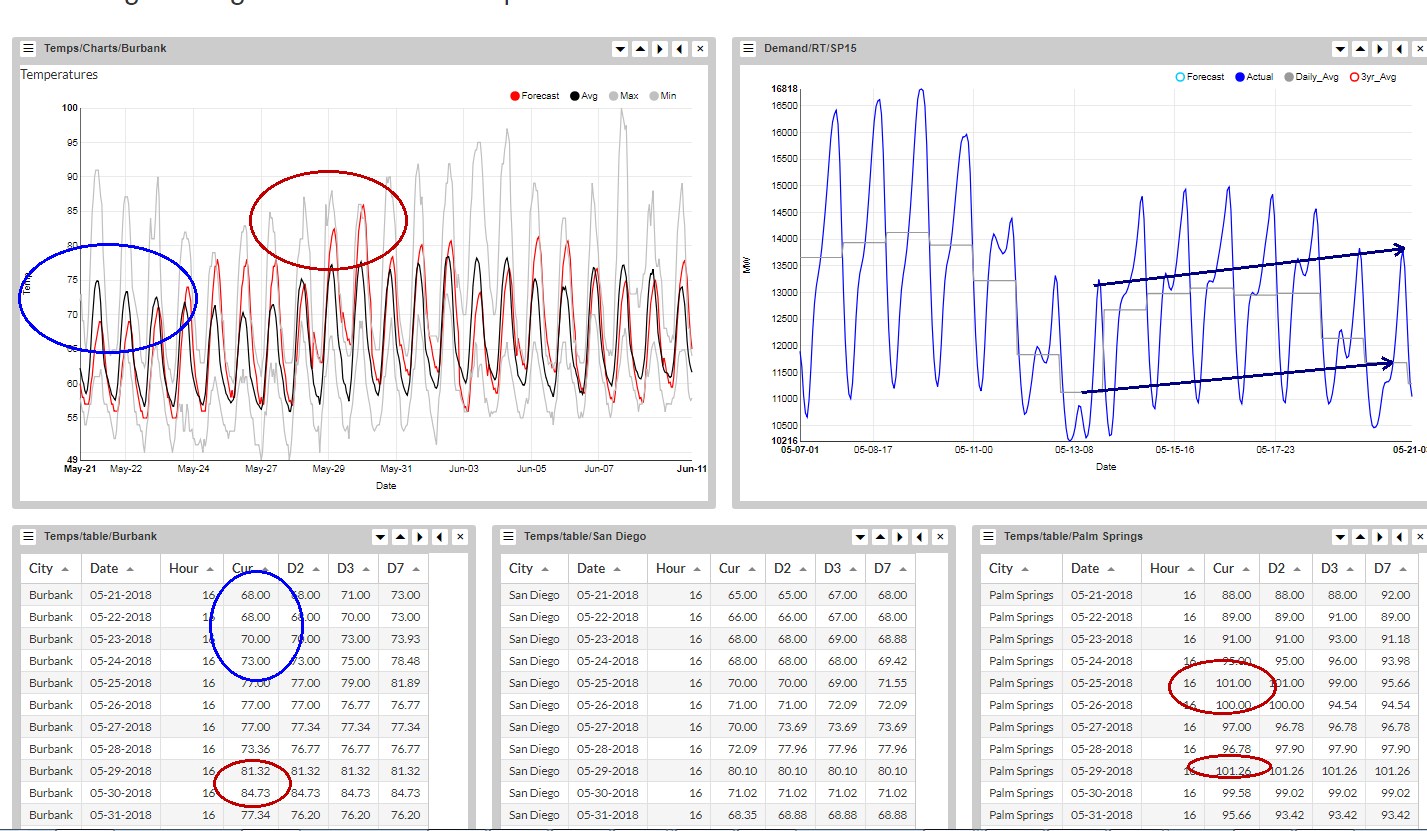 SP has some hints of heat, but not until next week. Loads have already rallied off of the miserly levels from last week. 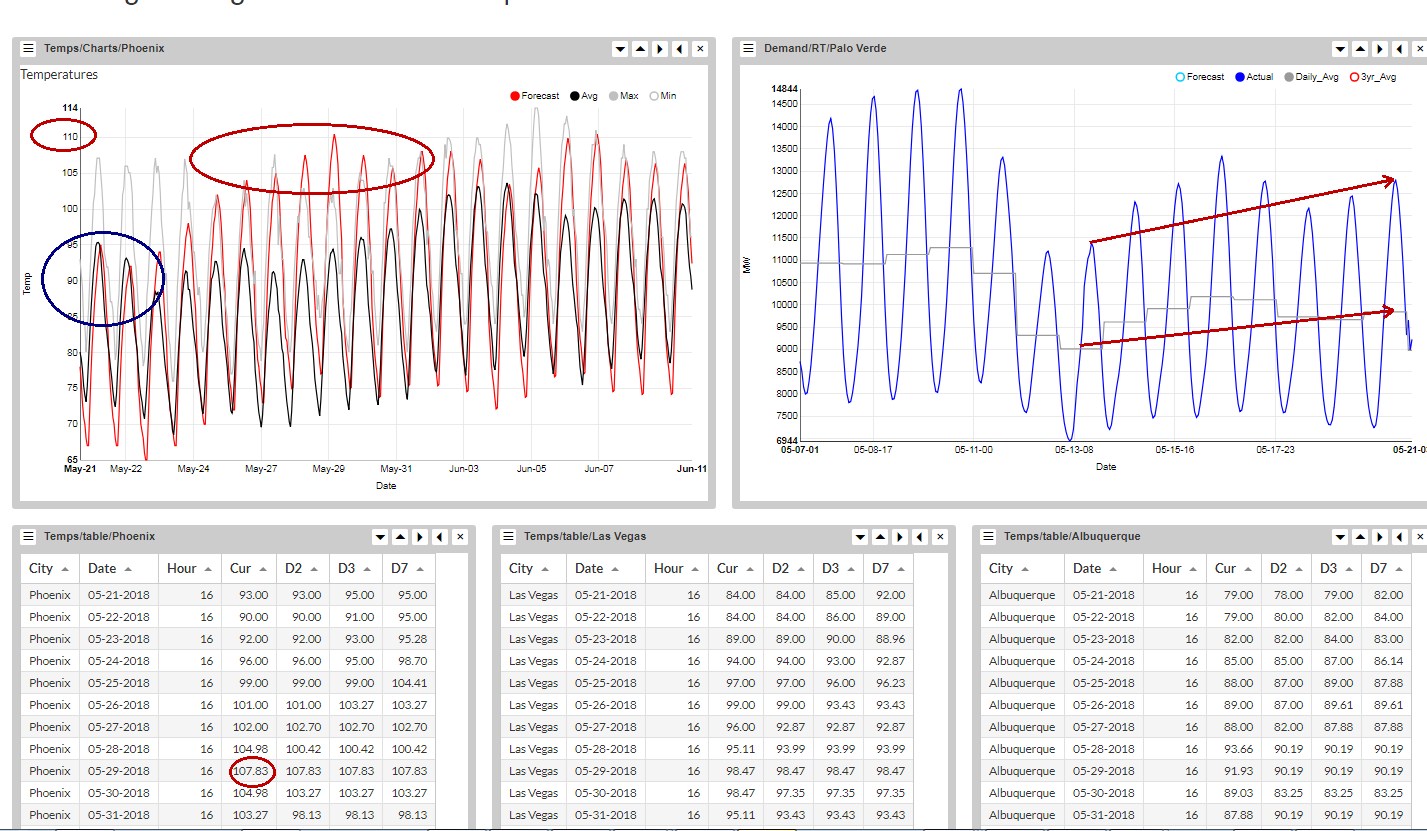 Phoenix is set to be tossed back into the cauldron as temperatures approach 110. Note the steady increase over the next ten days.

ISO renewables are very bearish; wind has averaged close to 4000 aMW with no solar dispatch; MidC wind is spotty and nearly non-existent this weekend.

NOTE: I have deprecated many of the hydro reports that were in the Morning Briefing. You can still view these, they have been renumbered with a 900 prefix.  That is a sign of the times, where we were uncertain as to the timing of runoff, now we know.  We will re-order a few more over the coming weeks. 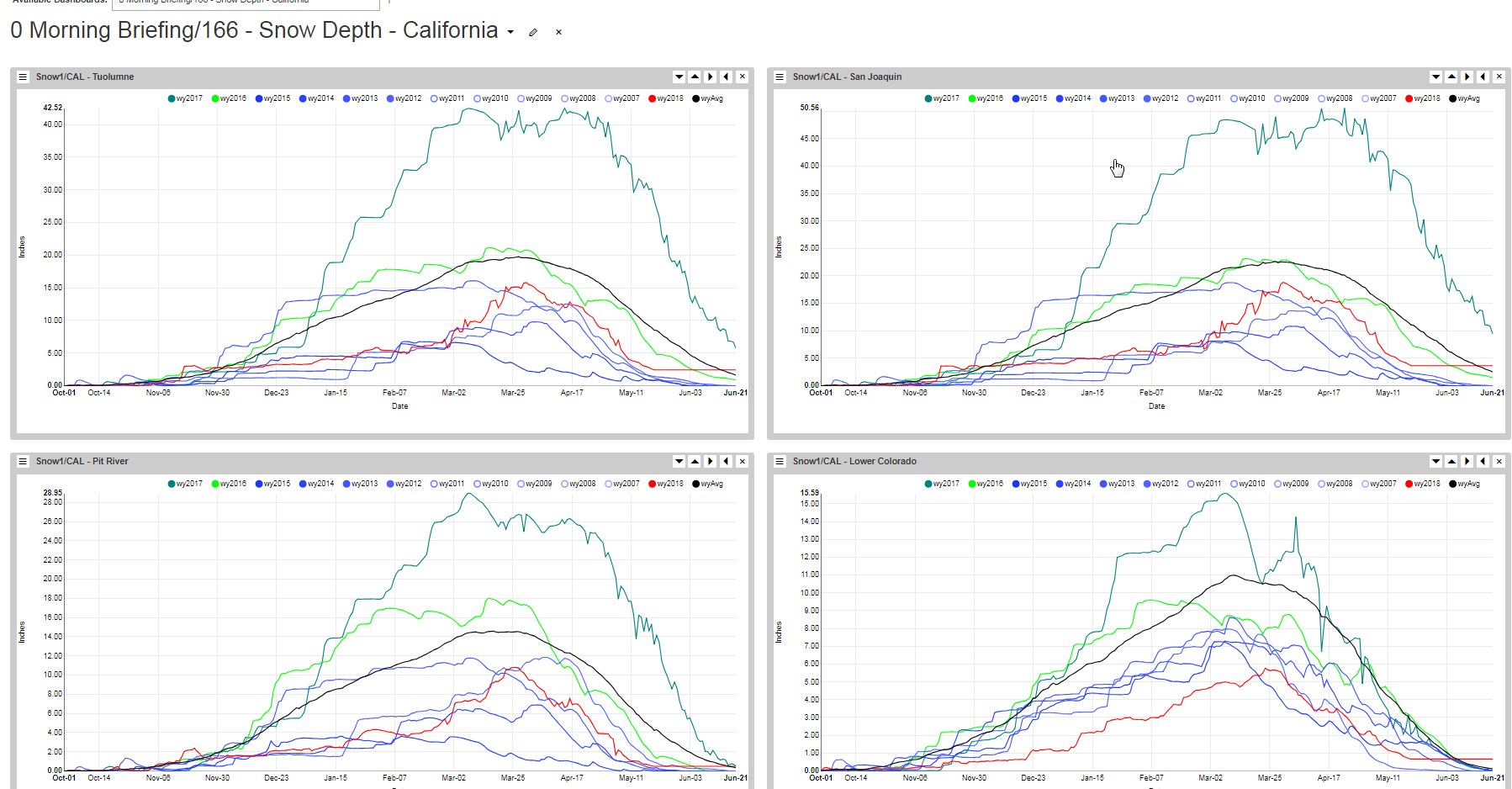 The Pit River is nearly at zero; the other basins have less than five inches – the runoff is over in California. Yellow’s mellow, brown down for now. 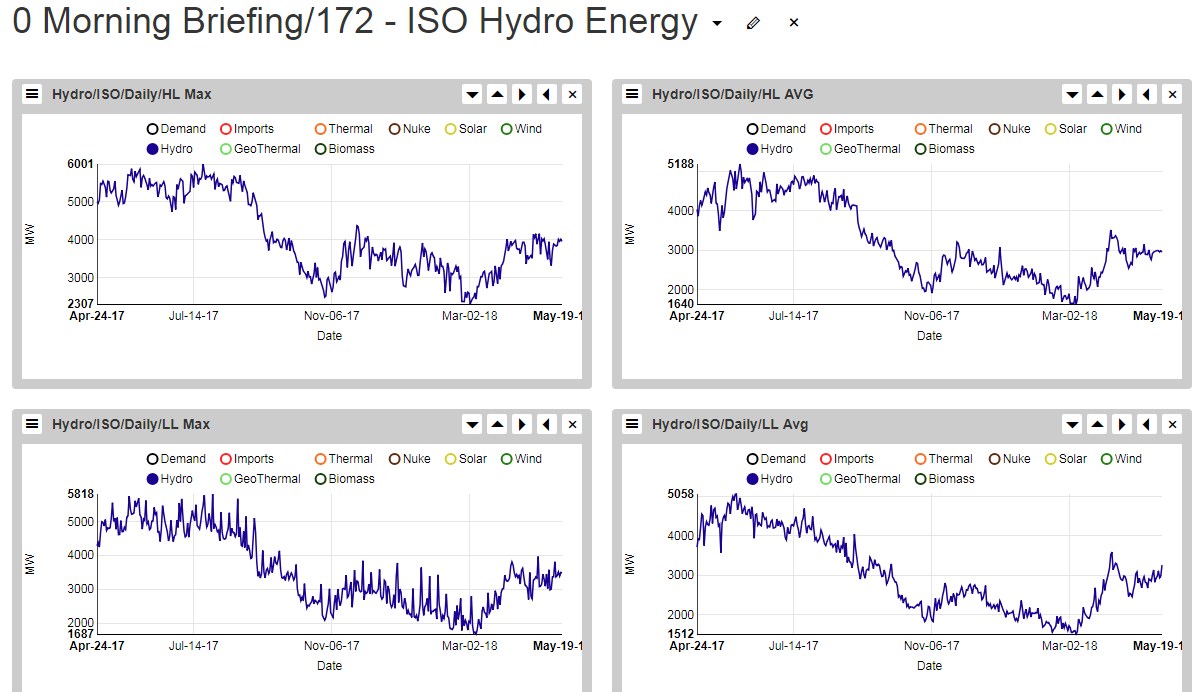 WYSIWYG for the time being; don’t expect net production to change much, maybe drift down but not by much. The state has relatively full reservoirs, thanks to last year’s massive water year.

Check out stream flows in the Golden State: 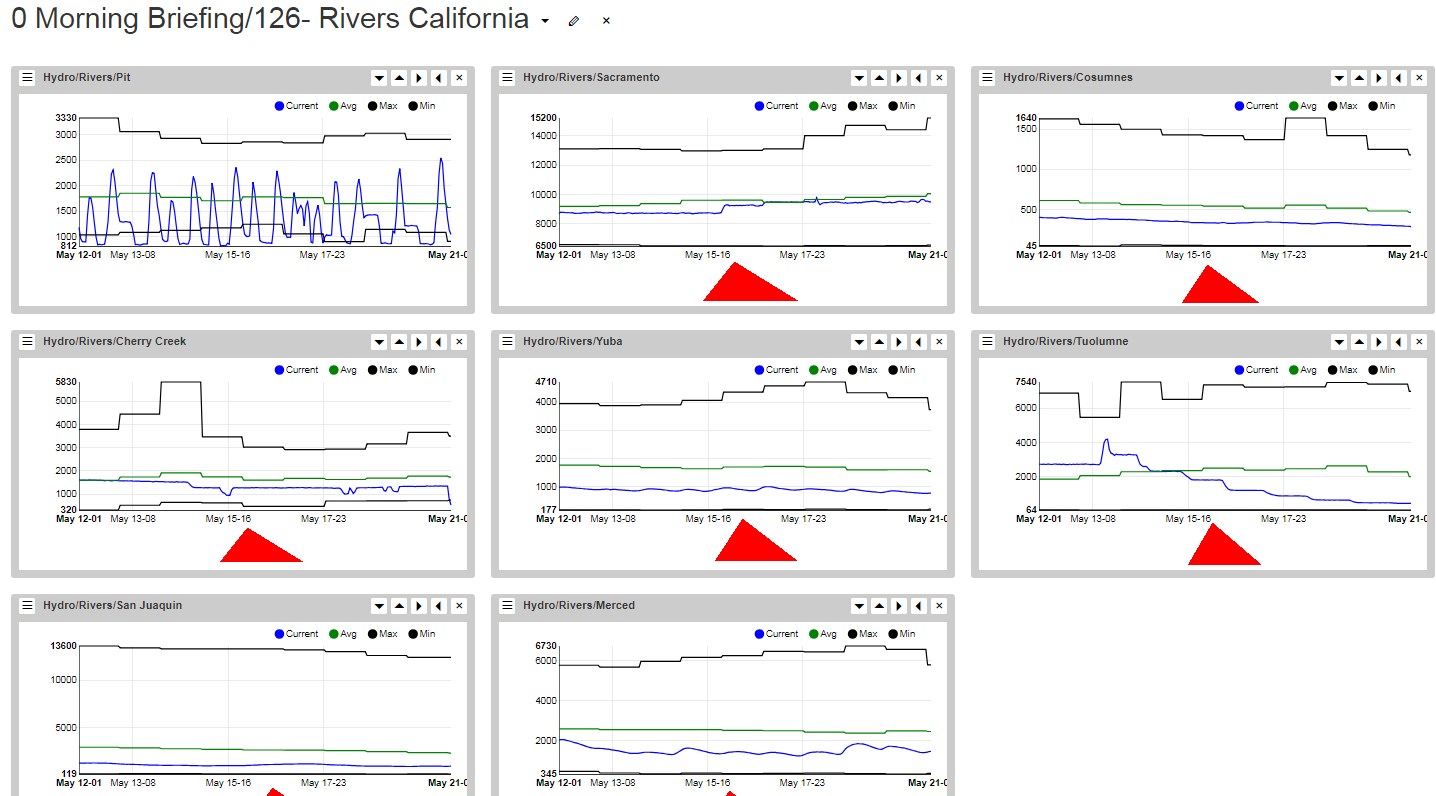 Red Triangle is our code for – Below Average. The last two are below; the pic got cut off. Bottom line, hydro is no longer a “variable” in the ISO equation – we know precisely how the ISO will operate its hydro for the rest of summer.

The project disgorged an astounding 210kcfs through its turbines over the weekend – that is hydraulic capacity. All the while, BPA added nearly ten feet to Lake Roosevelt, but to do both of those, they had to cut spill by 60 kcfs. 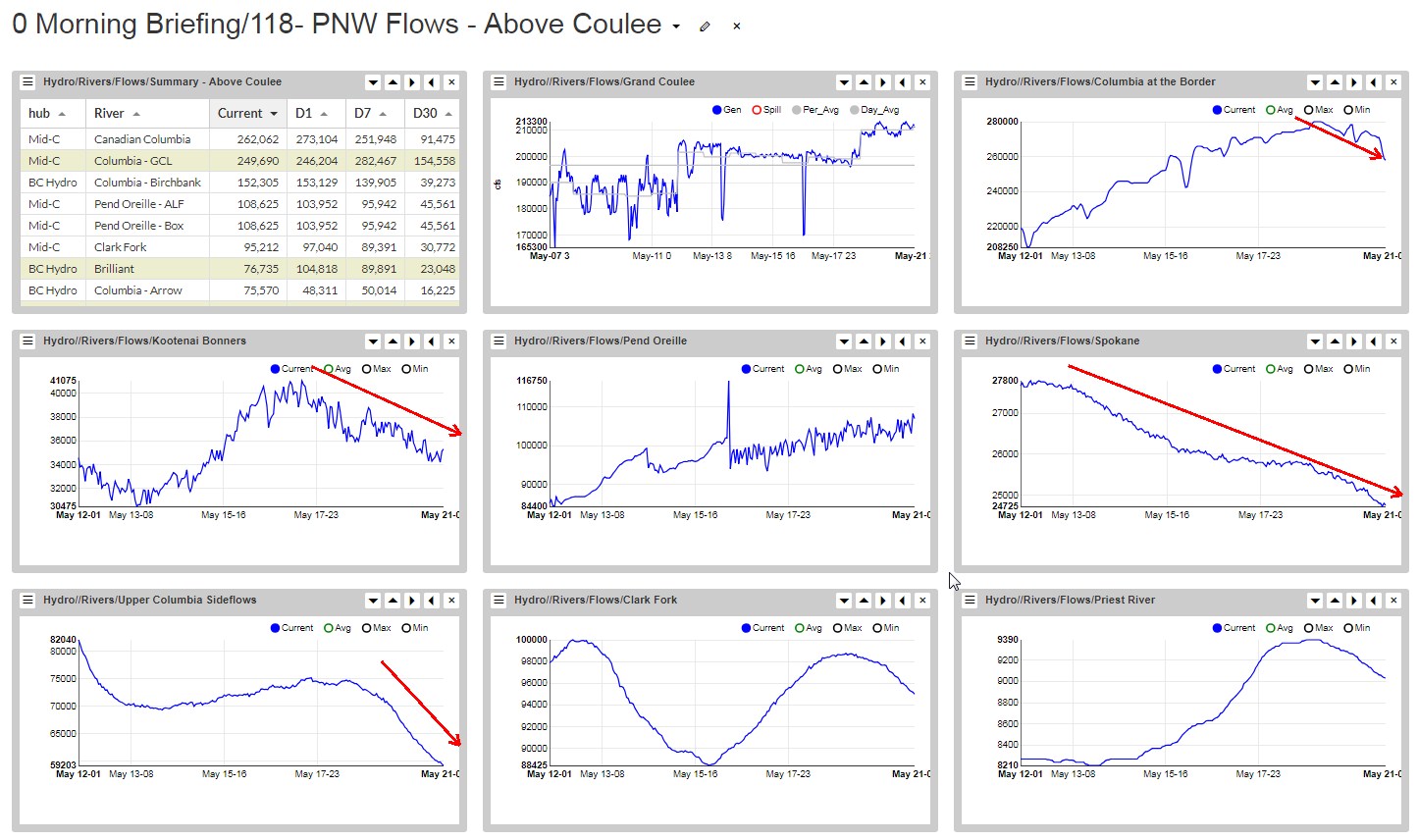 Several rivers have crested, though inflows remain strong, those will back down over the next several weeks. Our inflection date is June 15, that is when BPA gains full control over price. 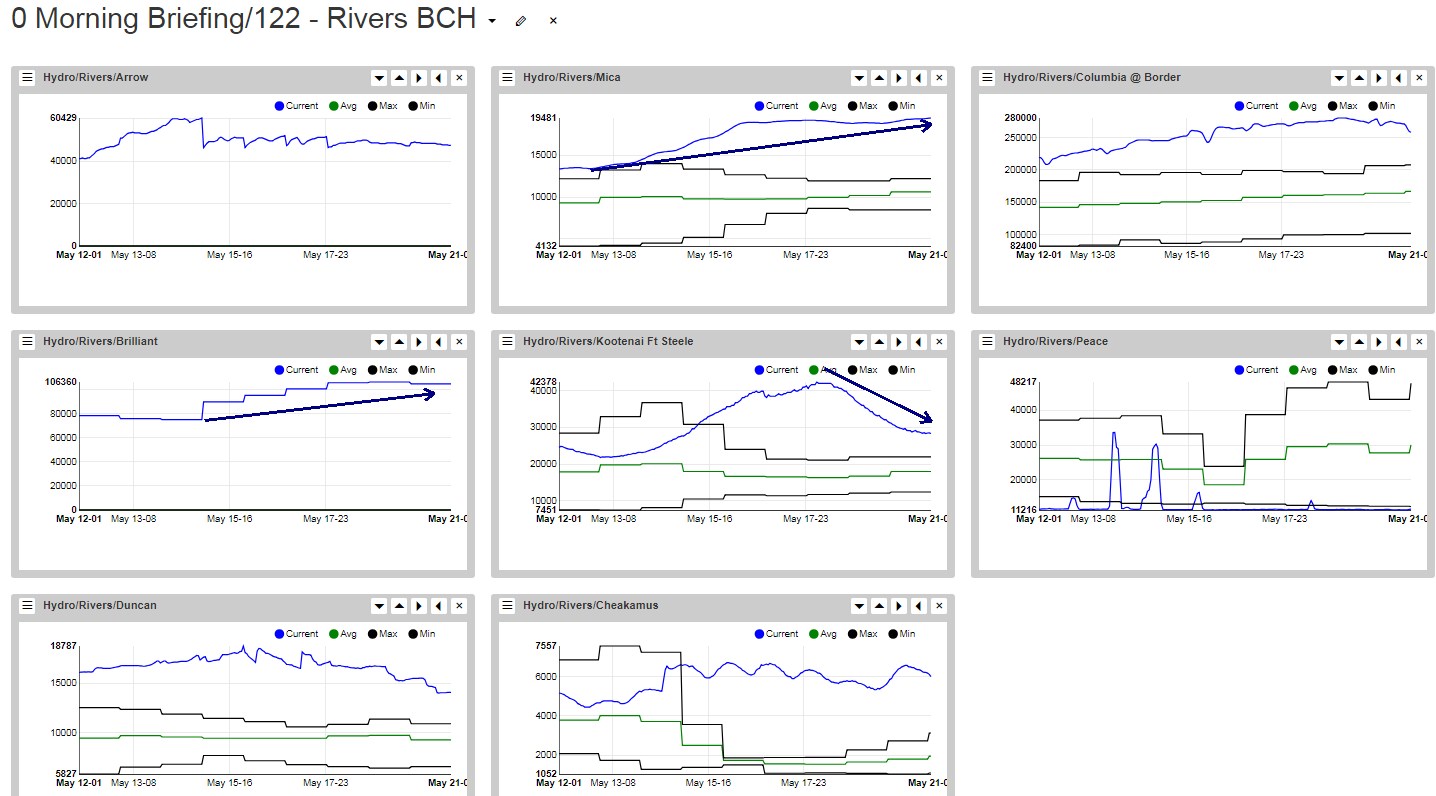 Canadian flows show little sign of slowing down, aside from the Kootenay above Libby. Everywhere else is robust, but there is plenty of room in storage. Note the Peace has backed off indicative of weak BC loads. 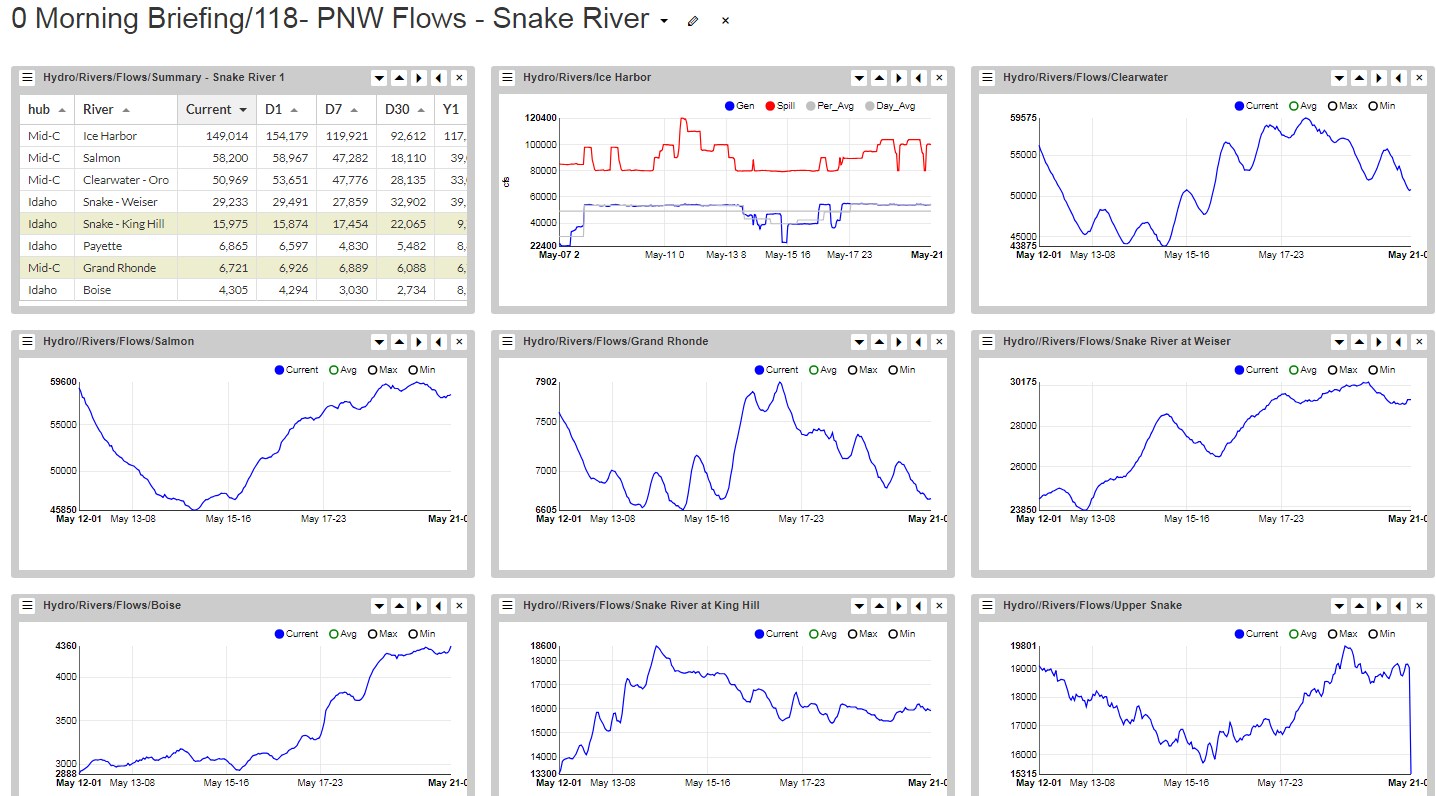 The Snake has also hit its crest; it is all downhill from here. But before reading WY18’s last rites, let’s look at snow: 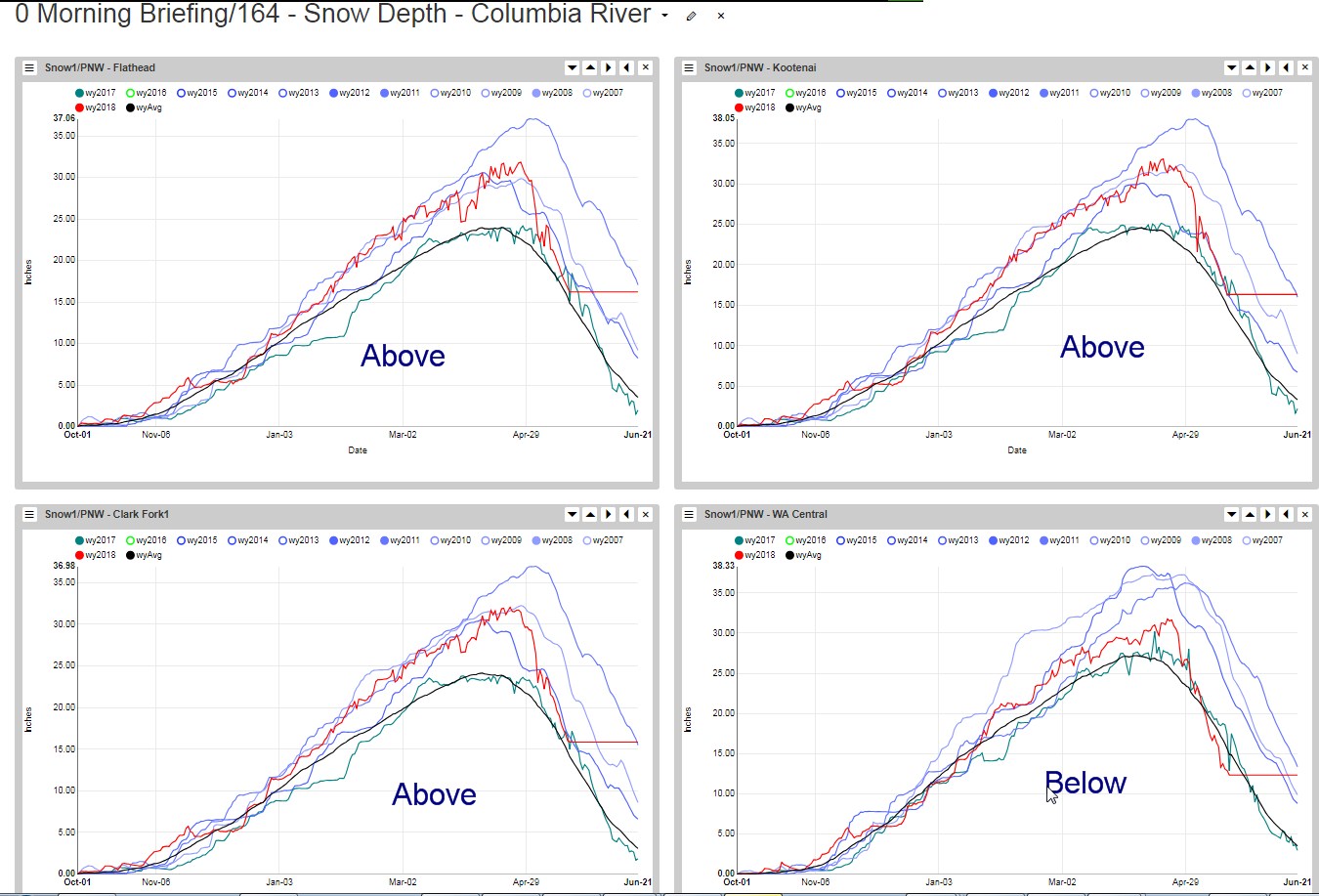 Aside from the Eastern Cascades, the major basins are still above average for May 20th, but not by much. Contrast WY18 with 2011 or 2008; this year is 3-4 weeks ahead of those big years, and with more heat en route, that melt will accelerate. Hence our expectation for a June firming, maybe even sooner than June 15.

The Snake is slightly above at a few stations, and the others are normal to below. 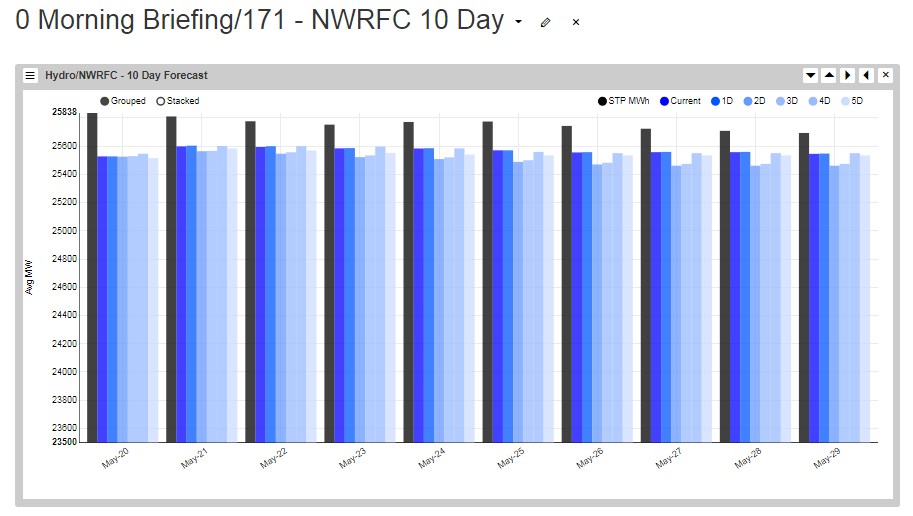 Today is STP, in closing, we like to look to the RFC’s 10 Day (as of Friday). Here we note cuts versus last week’s STP. Not sure we agree that BOM will get backed down, not with the warm weather, but there aren’t many BOM days left, so does it matter? June is where the action is at, and we’d expect to see it walked down, some. 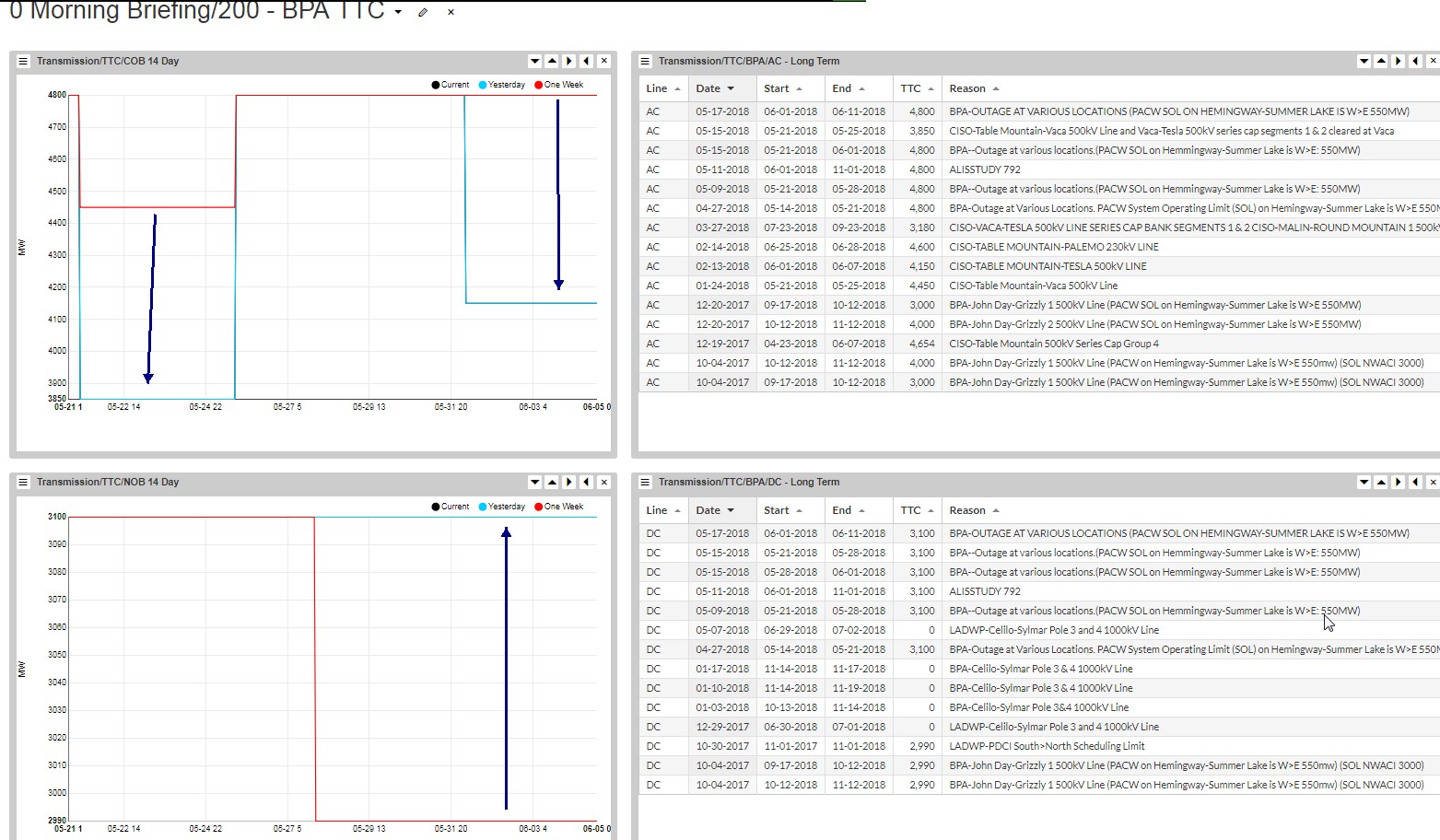 Some minor changes to TTC on the AC and one change on the DC. 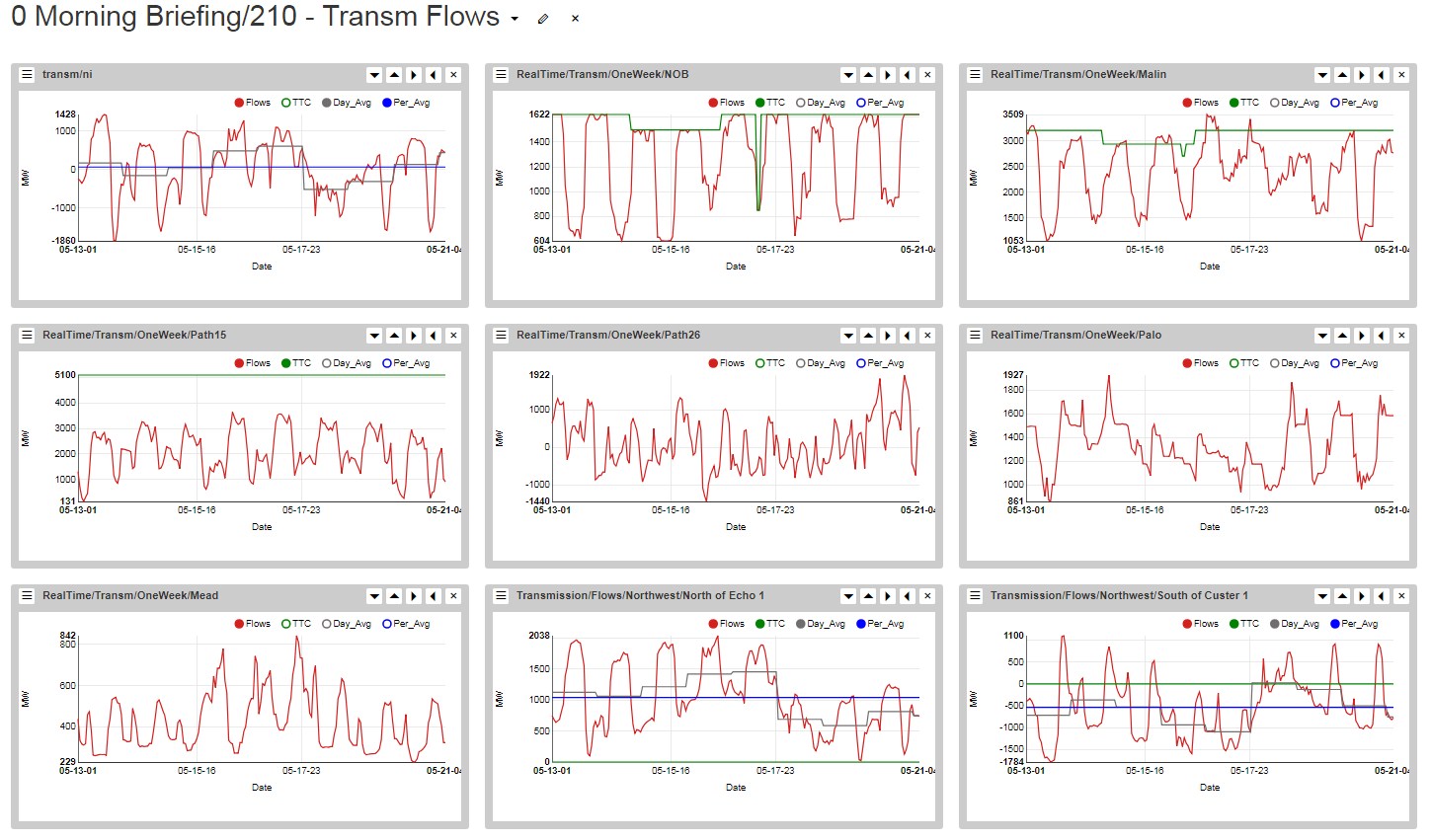 No surprises in transmission flow.

Doubt we see fireworks this week, but next week could get interesting in the south. We’ll update our market views in a post to follow later today.