The following monthlies caught my eye. 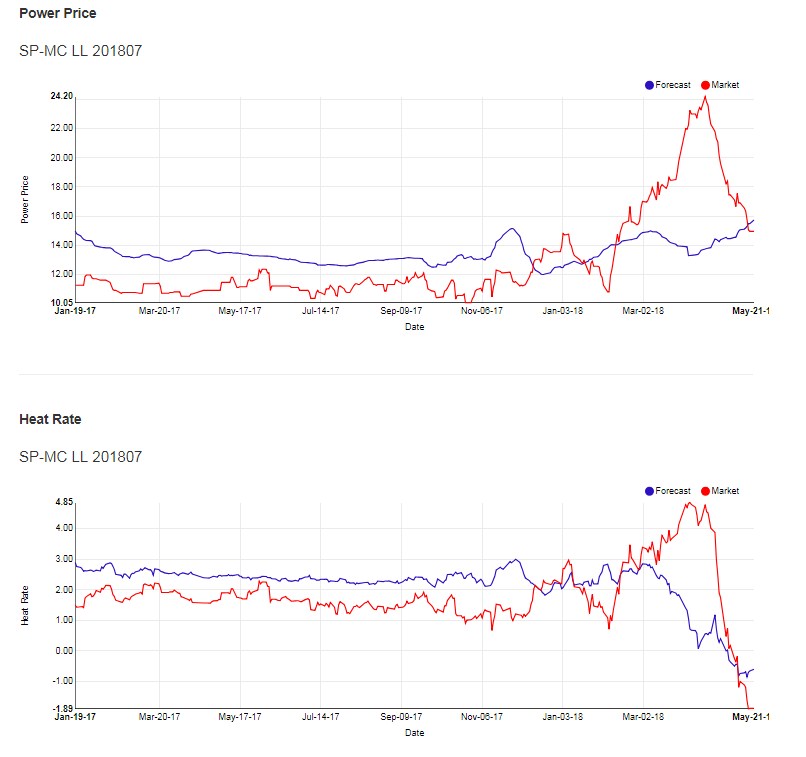 Typically, whenever looking at an SP trade, we see price and heat rate move in opposite directions because of the SCG blowouts, but not in this spread. The July SP-MidC has collapsed both in Price and Heat Rate, and that may be an opportunity to buy the SP. We suspect some of the collapse is from a MidC rally driven by early snowmelt in May. OK, maybe that is valid, but now this is priced like an average water year with normal Citygate prices. Neither is correct – we are buyers. 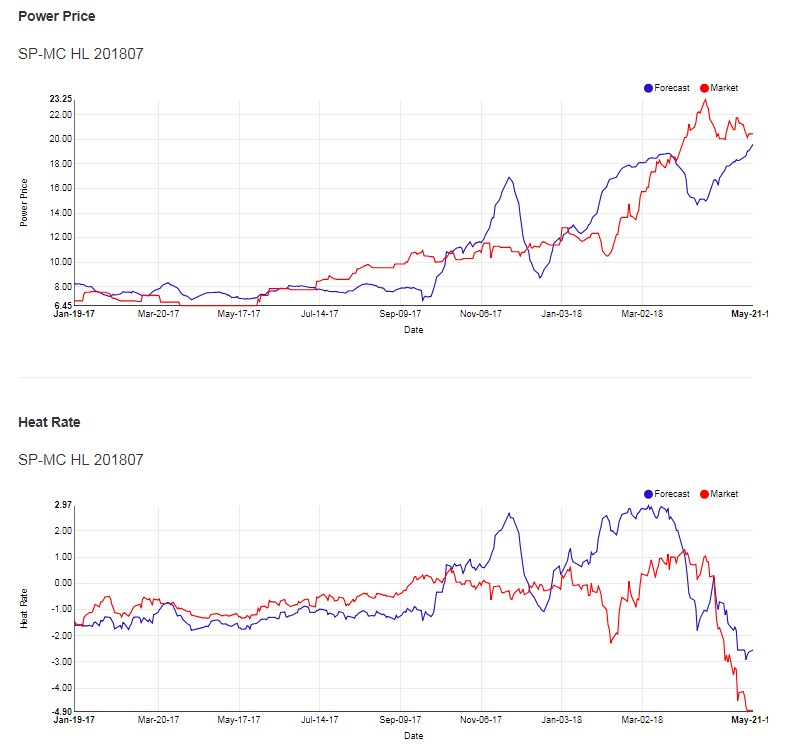 Same trade, except HL, and note the two plots move in opposite directions. We’d trade the LL, but not the HL. 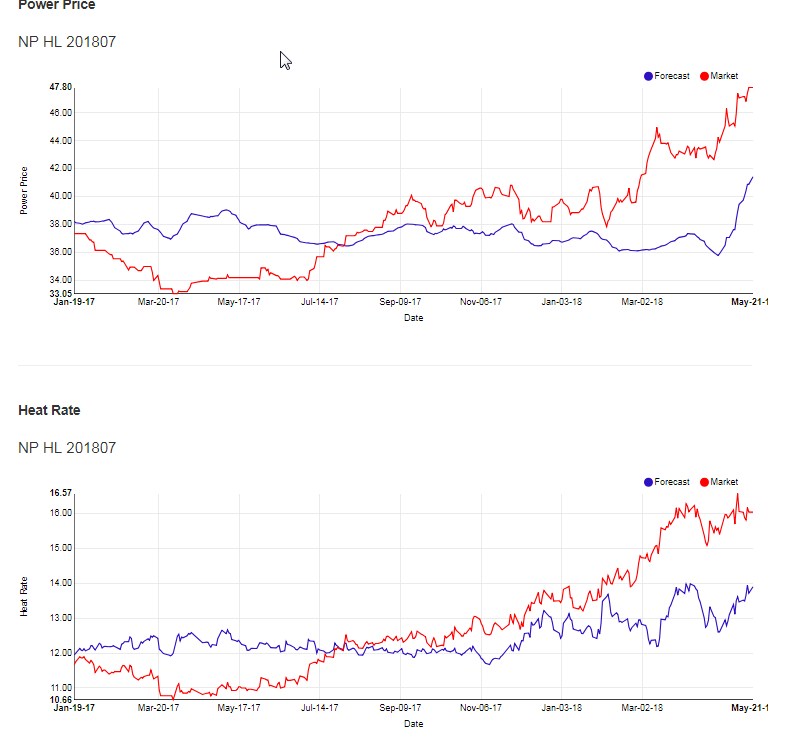 Lots of July’s, this one is the NP HL outright and is a contract high. OK, we get the dry water year, but that is the premium that was added from Jan to Mar; this latest premium was added in May, and we don’t get it. It’s not gas, the heat rate is at a high, too. It isn’t cash driven; NP is mired in a bear market. NP hasn’t cleared a 10k heat rate in two weeks: 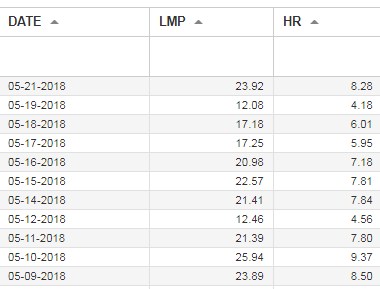 Of course, shorting this is what we call a CEM – Career Ending Move, but it would be tempting. 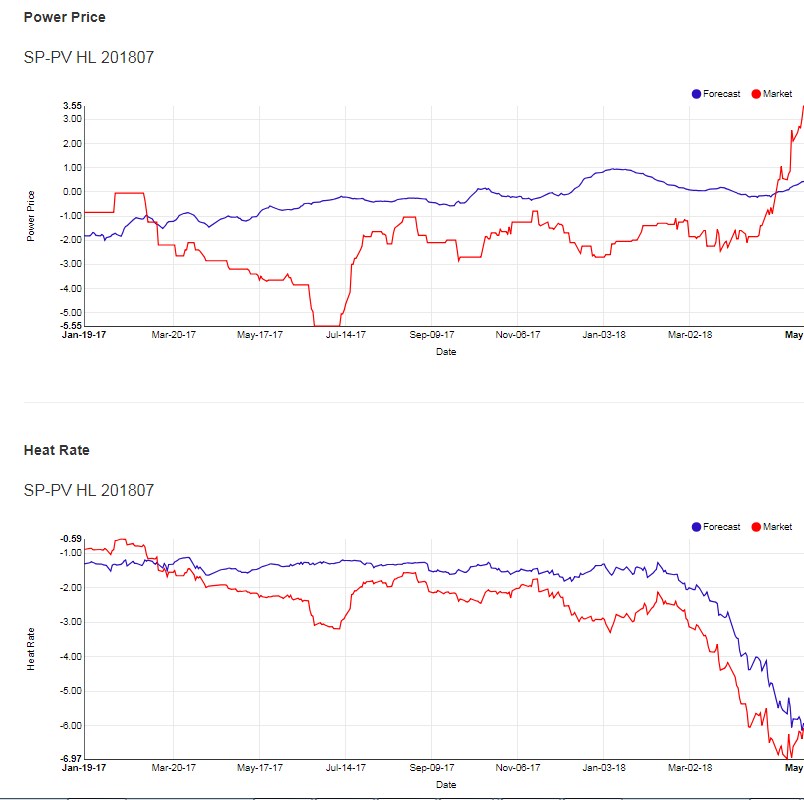 Last July, I promise – this one is the SP-PV HL and just set a contract high for price, having rallied $5.00/mwh in about a month. Like NP, cash has been abysmal inside the ISO; it isn’t weather, either – Phoenix is growing HOT, LA is NOT. Not sure what has turned this into such a bull but we’d be happy shorting at this level. 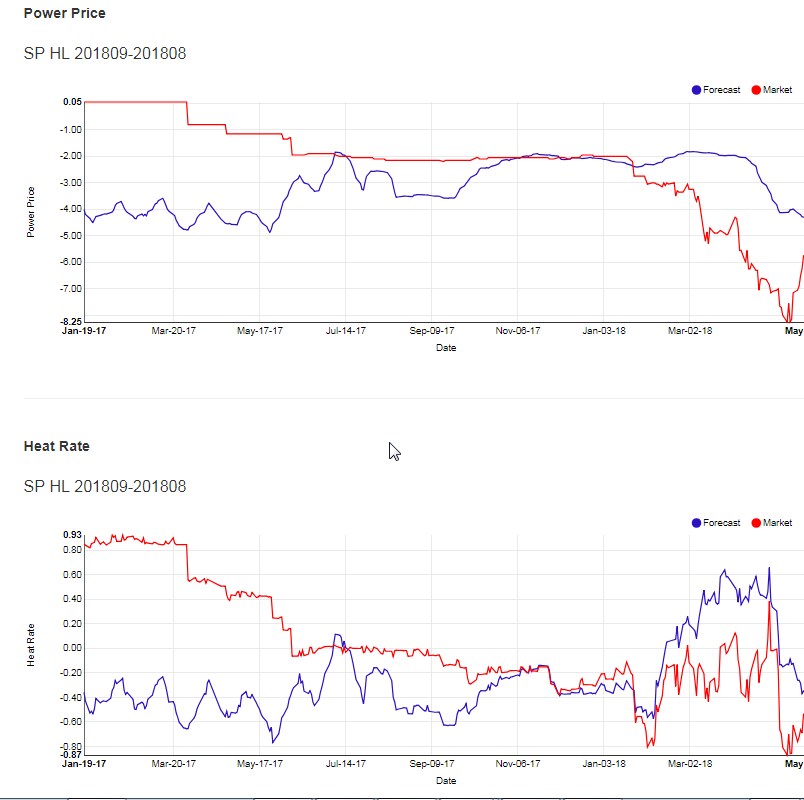 We wrote about this roll, the Sep-Aug SP HL back when it hit its low, now it is rallying but we’d be buying more of it off cheap cash, bearish BOM outlook and it remains inexpensive. 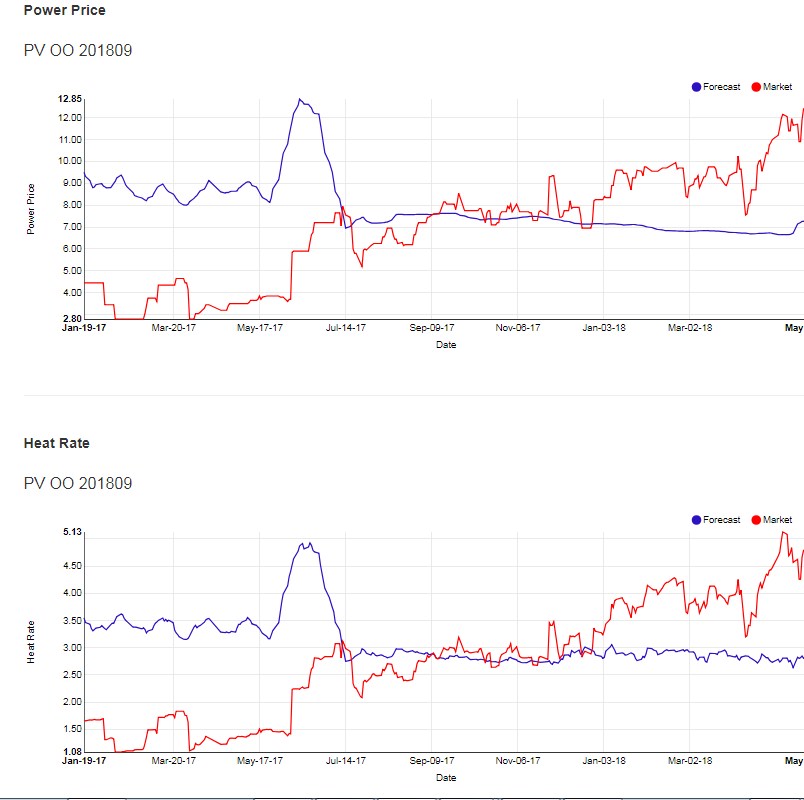 This isn’t, the Sep PV On|Off; the price hit a contract high, and the heat rate isn’t too far behind. We think the forecast is value which puts this about $4.00 too high. Keep in mind; Sep is not anywhere close to peak heat for Phoenix, in fact, it is the monsoon season. Watch where the cash on|off clears later this week when PV goes back to 100+ that is a good proxy of value for Sep. 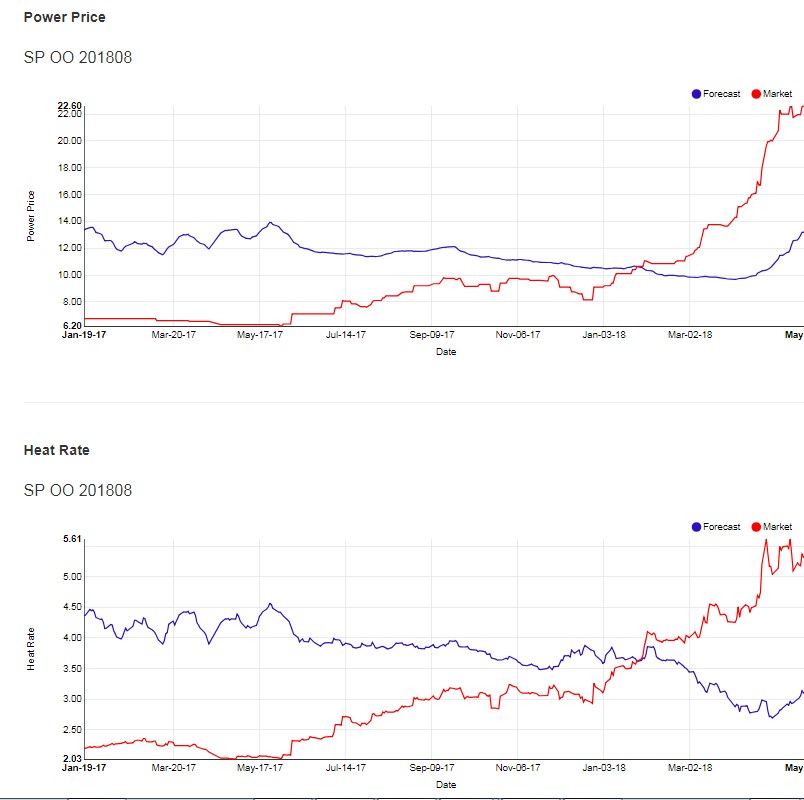 We’d have less conviction about shorting this one, the SP Aug. Price has hit resistance at a contract high but selling this is selling the daily call. Why would you do that for a few $/MWH?

We love this trade, the MidC Aug-Jul LL roll; now near or at contract highs (both HR and PP). Most of this crash is from a July rally off of early melt, but we think that may be overdone. Most of the Upper Columbia snow basins remain above normal, albeit barely, but there is still snow up there. A cool June could drive strong July natural river flows which would make this roll rally. BUY. 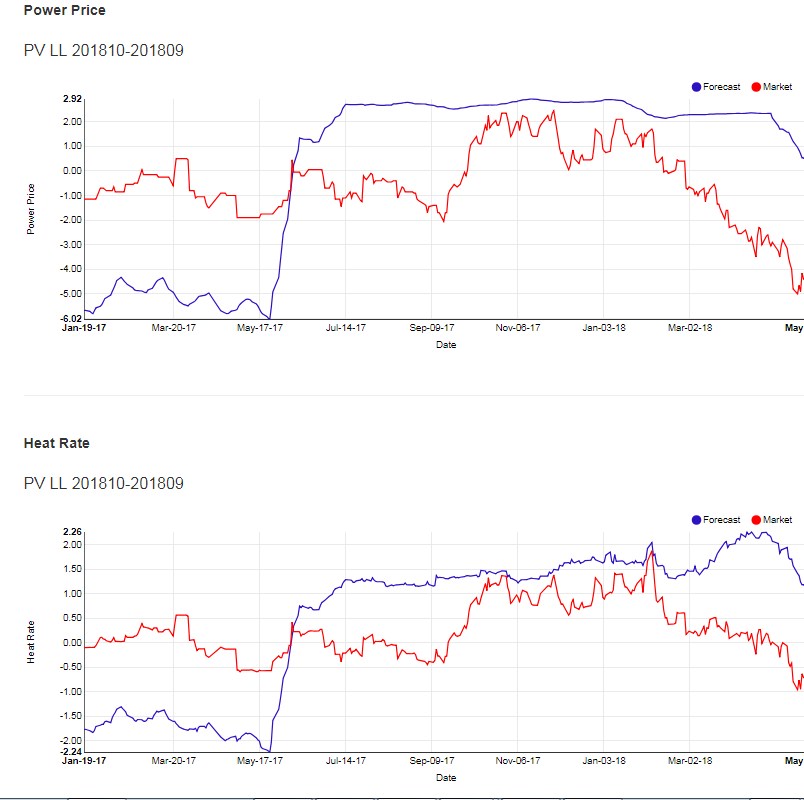 The Oct-Sep LL roll at Palo has been on a four-month slide and now is cheap. With the recent mini-rally, maybe the bottom has been realized. This trade will make money if July and August are a bust; if they have some big cash days, this could drop further. 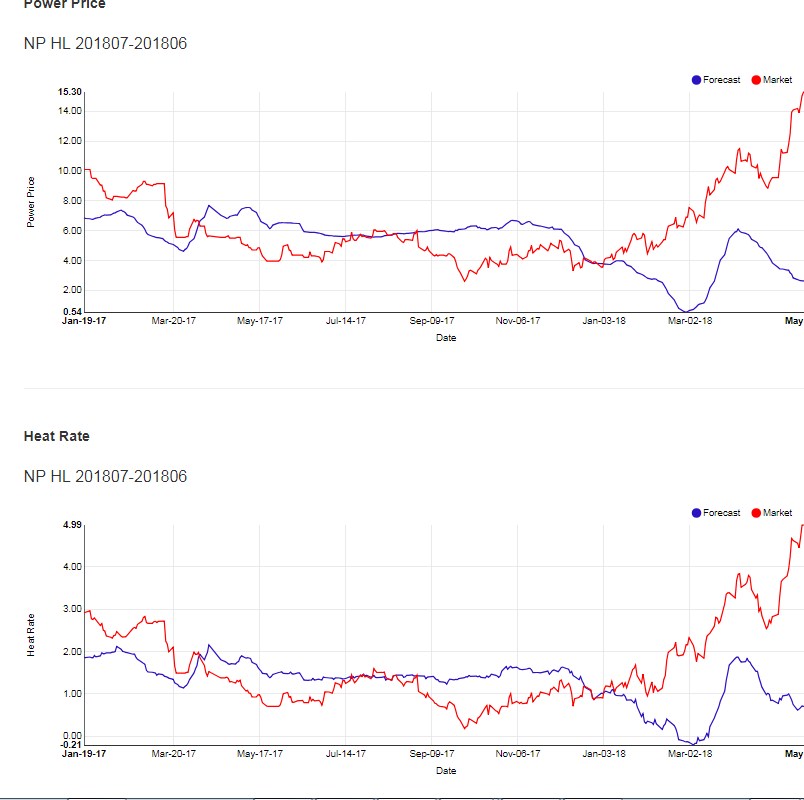 The July-June NP roll doesn’t make sense; it is priced like a big water year; this is not a big ISO water year, it is a bust (brown down, yellow mellow-type bust). The rally from Feb to March made sense, that is when Cal got all its snow, the April sell off made sense – that is when most of the snow melted. The May rally makes no sense, the rate of melt is way ahead of normal. 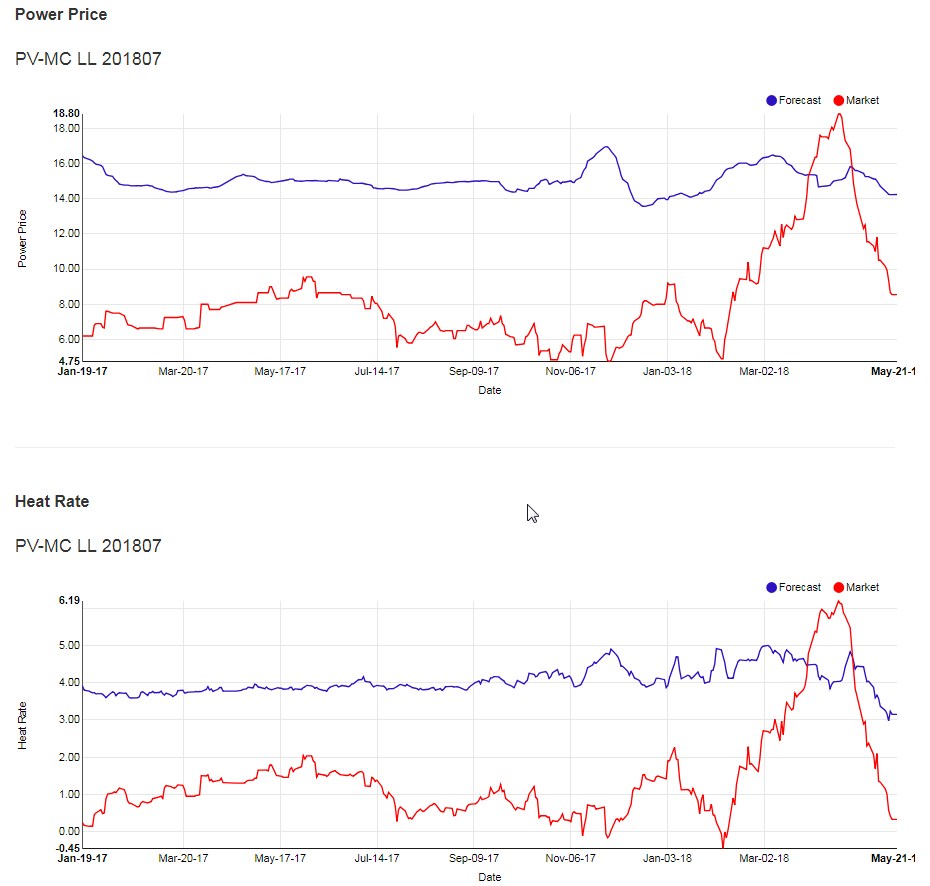 One more July – PV-MidC LL and this is cheap, for the same reasons we described above.