Most remarkable are the meager ISO prices; has a paradigm shift shifted yet once again? Recall, we had that “paradigm shift” where everything SP was worth 18k heat rate, recall that? Let’s take a look at this new reality.

Don’t bother rubbing the sleep out of your eyes; those are 5k heat rates at SP and NP – in Mid-May. Let’s see what Mr. Market thinks of these low LMPs: 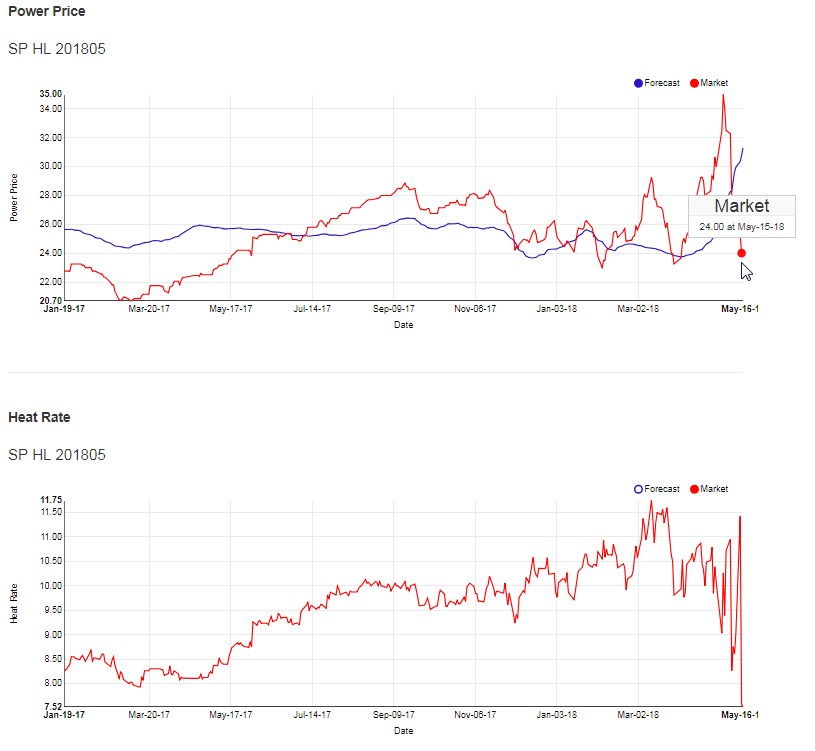 Ouch, Mr. Market is Mr. Angry Market and does not like this new paradigm an iota. So what’s driving this bearishness? A logical villain is demand, but it’s not that bearish. 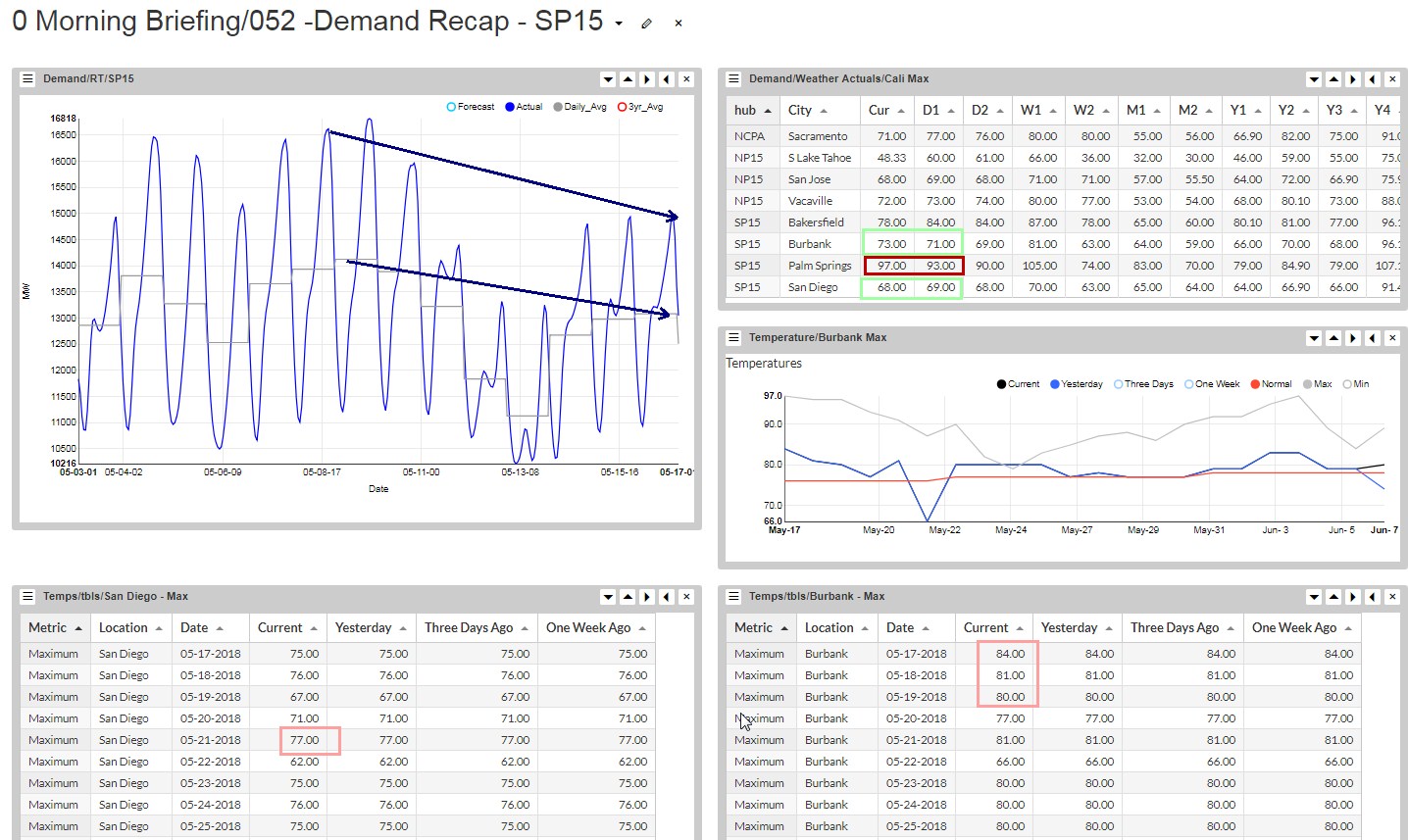 Demand is off, cool weather in the coastal load centers, but you wouldn’t call it cold, per NOAA: 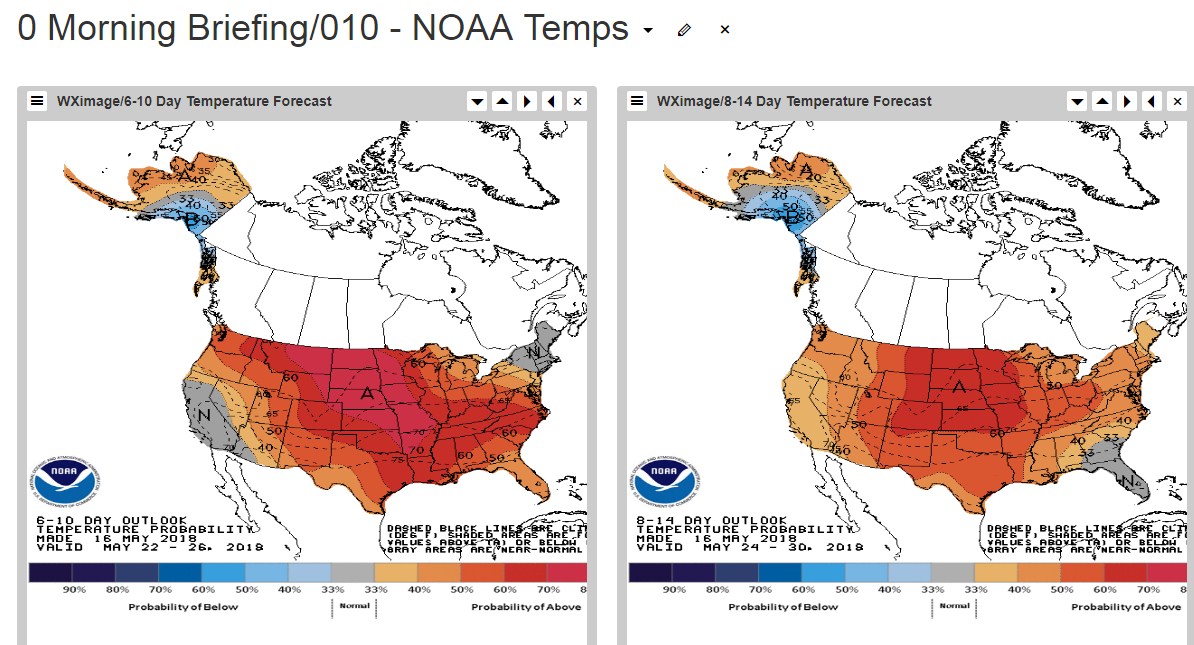 Call it normal in the 6-10 day and warm in the 8-14. Even today isn’t cold, and apparently, it isn’t low enough to drive gas from the margin: 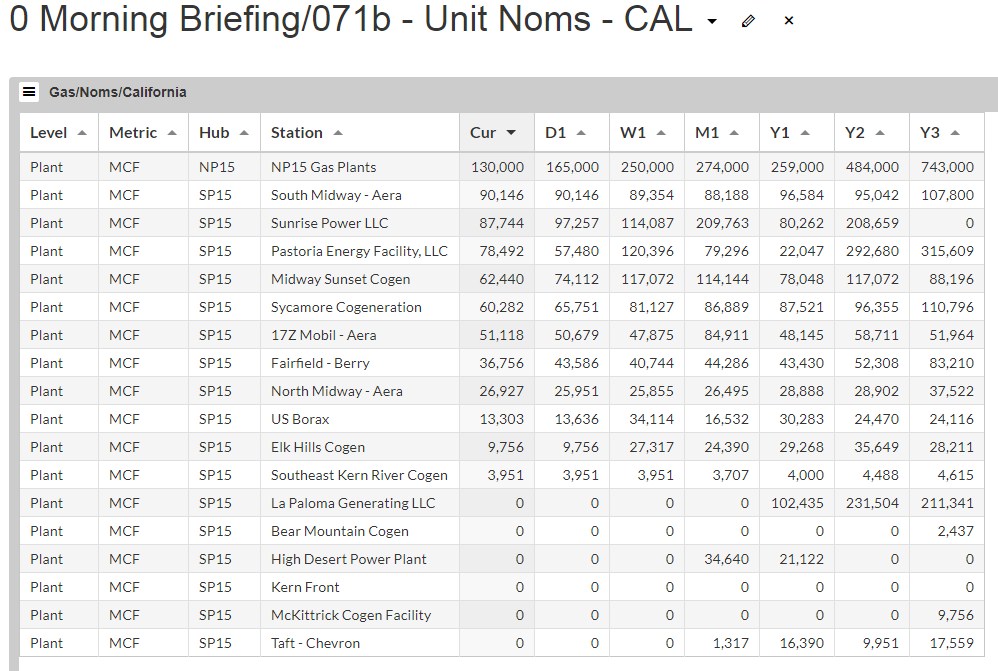 We’d expect to see all zero’s in the “CUR” column given 5k heat rates, we don’t; lots of gas online. But check out NP’s power noms, 130 MMCF and contrast that with three years ago, 743 MMCF. One other factor, hydro energy, should work towards higher prices. Current ISO hydro energy is about 3000 aMW less than last year. 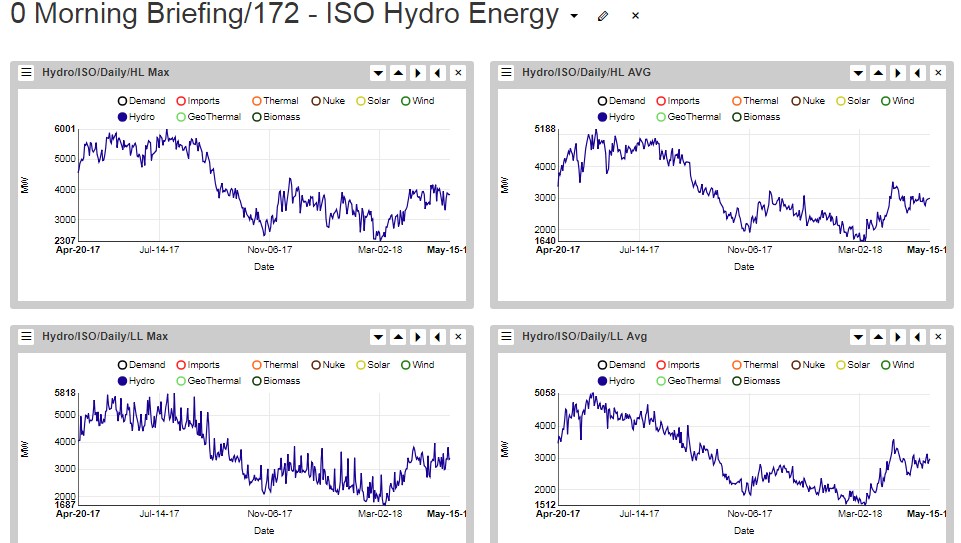 This low of prices is most likely a short-term bid behavior aberration, one which will reverse itself once fundamentals gain more solid ground … or not. The ISO always seemed bias towards the consumer at the expense of the generator which is why we were so taken aback by the one year SP rally. Whether it’s appropriate to read last rites over that rally in middle May remains to be seen, but apparently the bullish paradigm has felt some tremors. 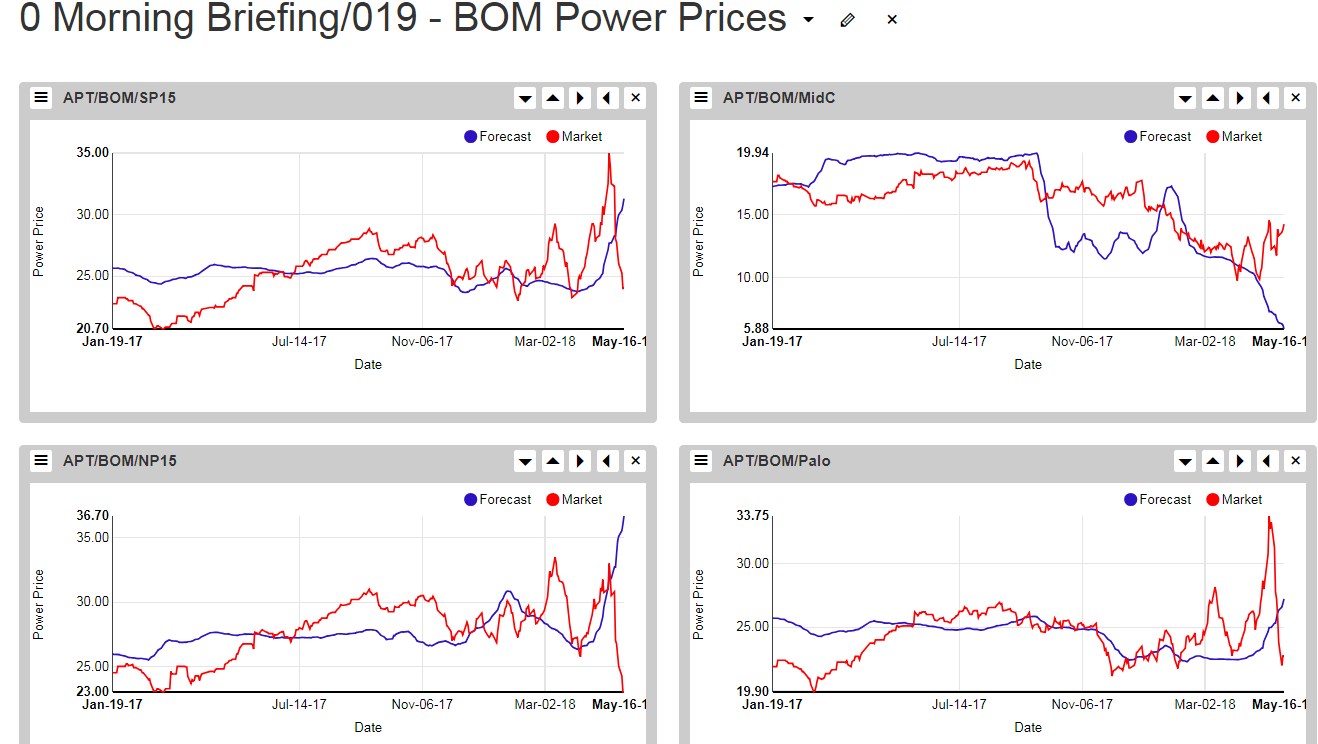 BOM’s taken a battering everywhere but where you’d least expect it to be battered – MidC. That hub is experiencing some of the highest flows ever for May and prices are rallying. Call it SPILL; that is what is keeping prices in the mid-teens. Maybe the ISO should try it; spill its solar and wind? 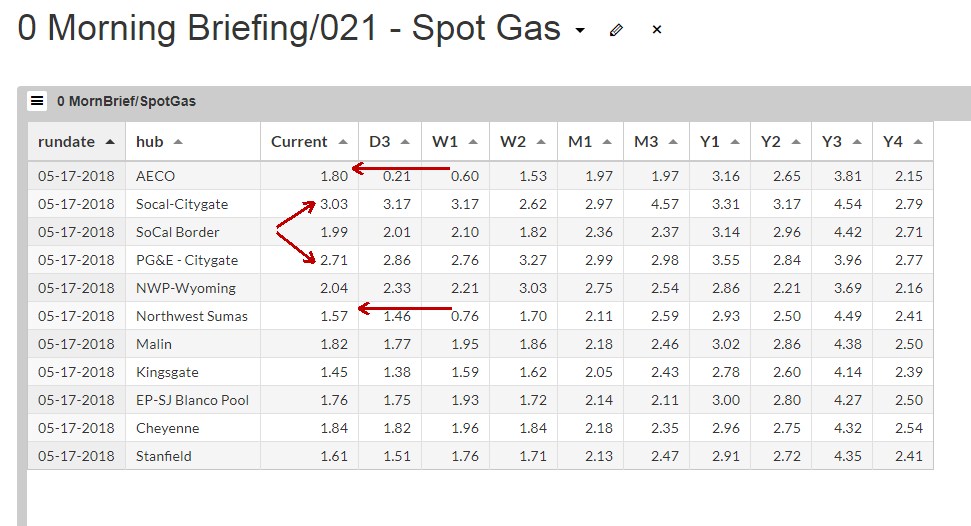 AECO and Sumas had strong rallies, don’t even ask why. Another Northwest oddity is the lack of injections at Jackson Prairie: 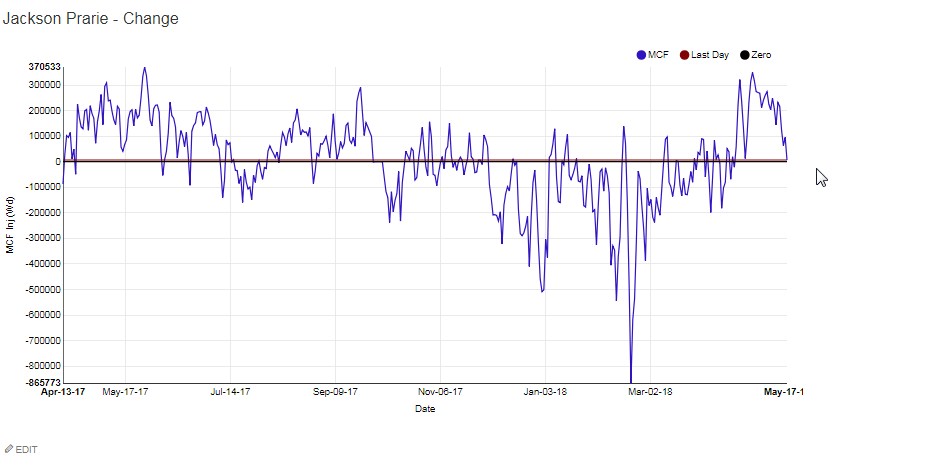 Where the utes were jamming in record quantities a few weeks ago, now next to zero is flowing into the storage facility. Maybe they only want to inject sub-$1.00 gas? If it rallies to $1.57, they say “forget about it.” 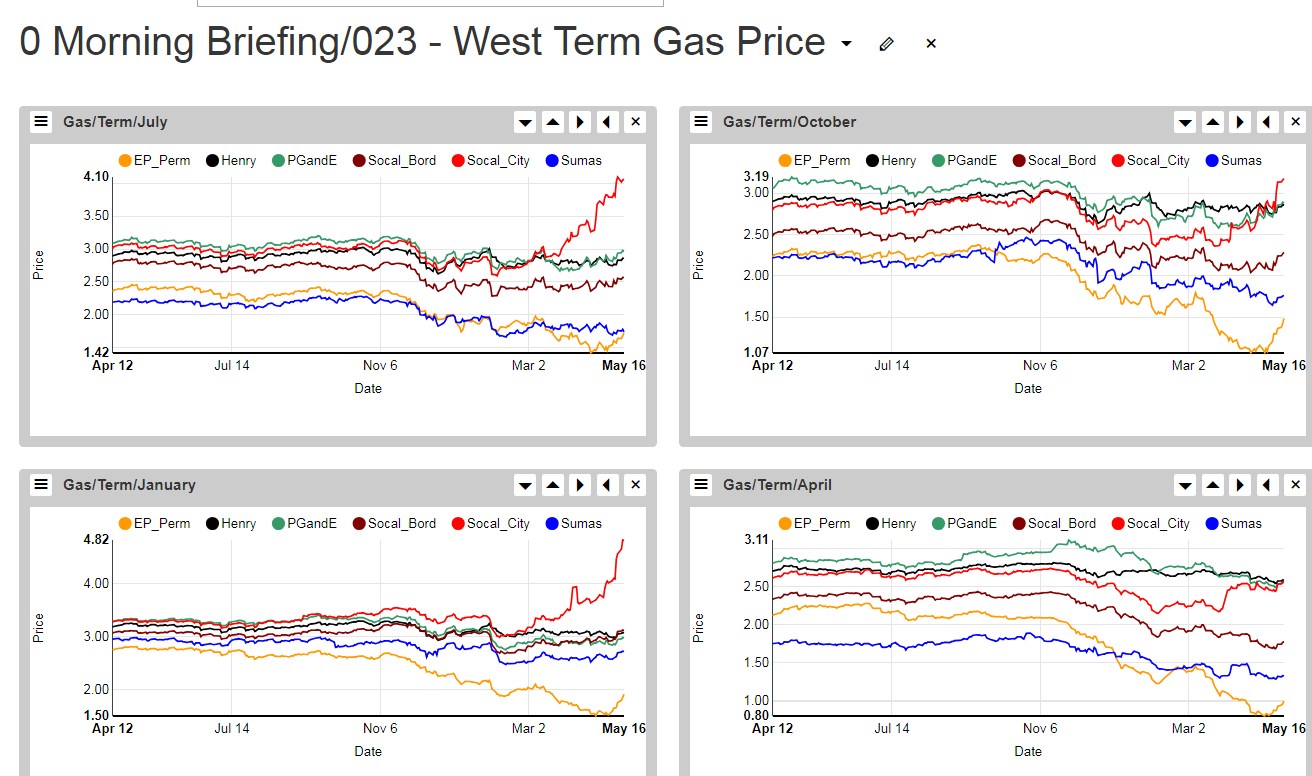 The market is pricing this like it’s Armageddon in LA. Is it? Not storage-wise, Socal is well ahead of last year, like 10 BCF ahead: 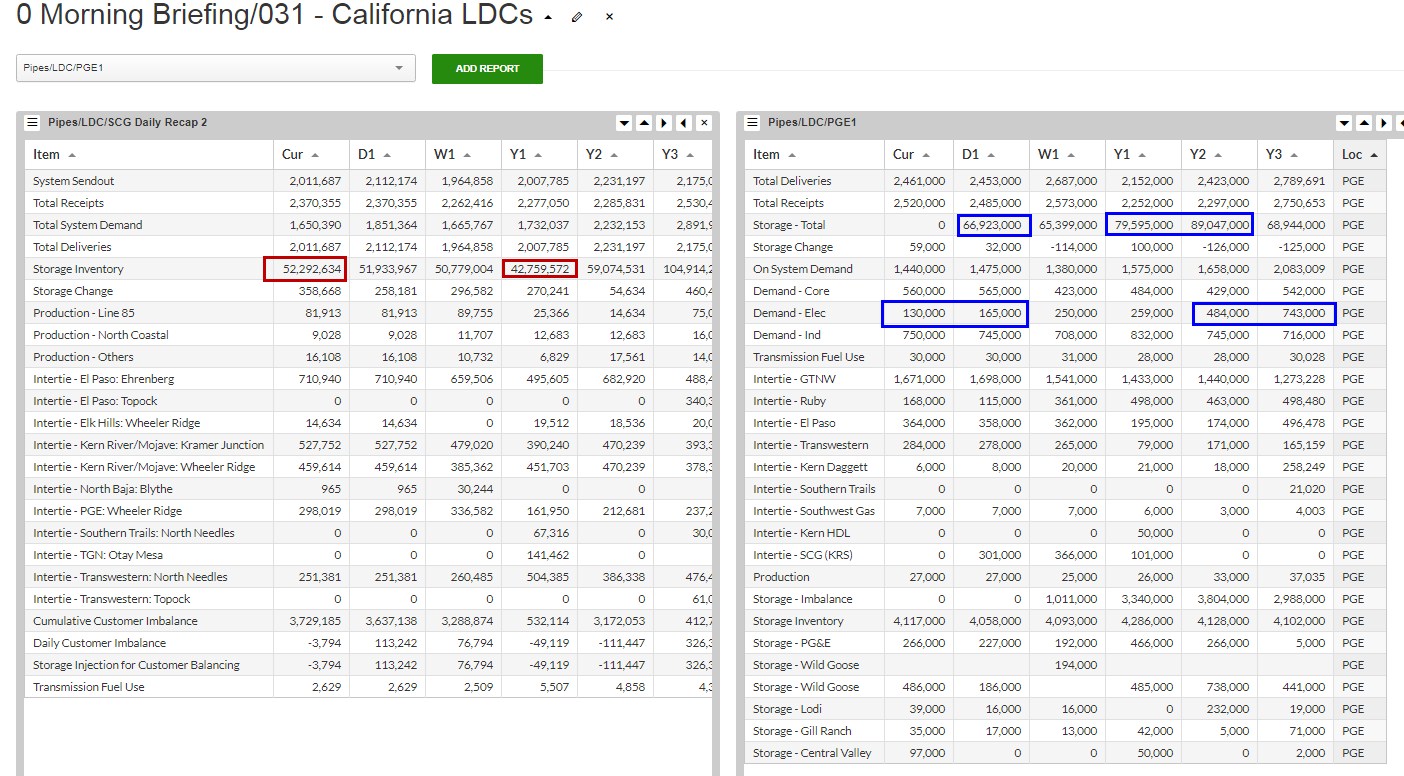 PG&E Citygate is thirteen bcf behind last year, not ahead, but the strength is all at SCG. The market fears those 3b demand days next winter and SCG doesn’t have the import capacity plus storage withdrawal capacity to meet demand. Maybe there are some other regulatory issues, like further constraints on how gas storage is used inside Cal? 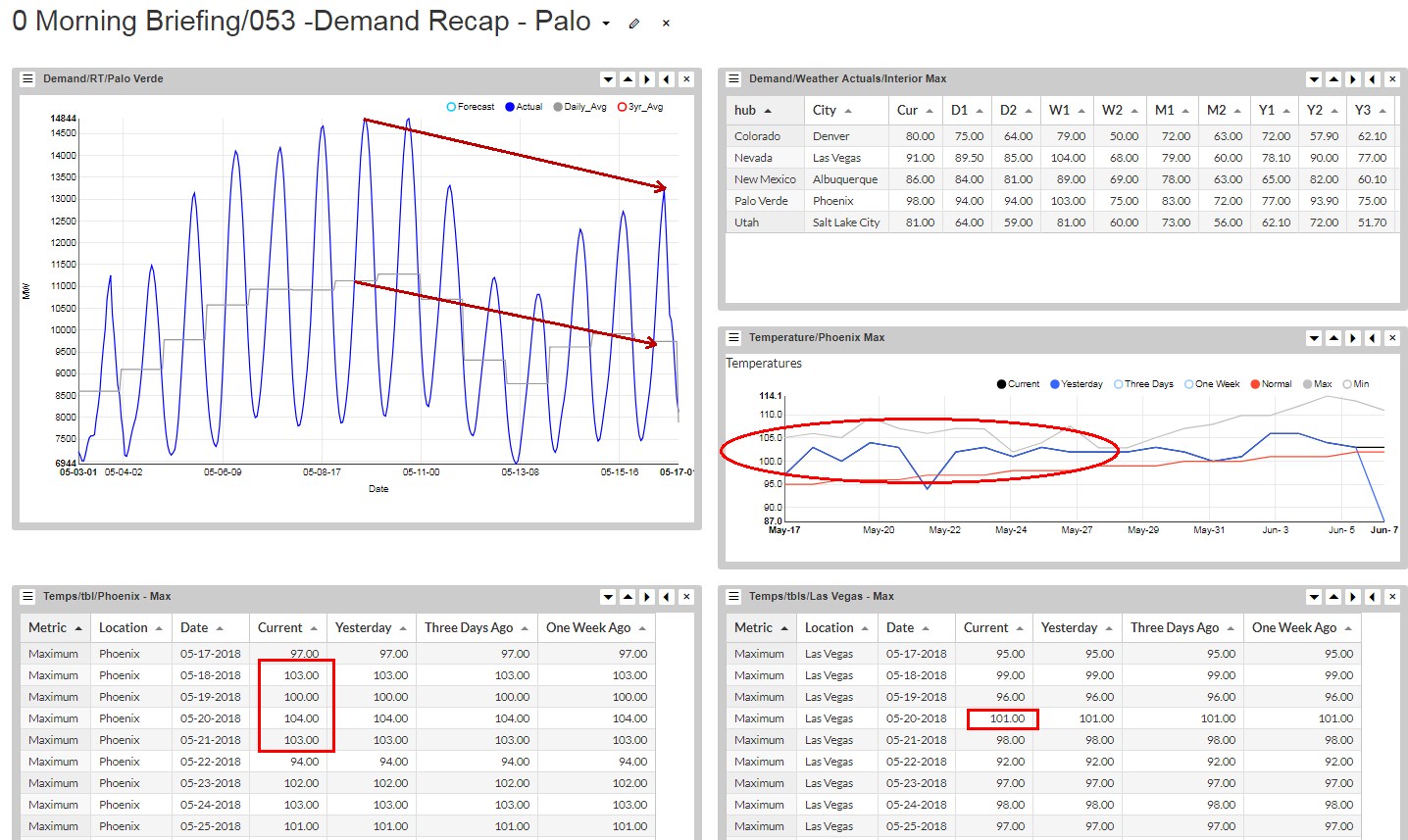 Loads are off at Palo, but more heat is on its way; in fact, Phoenix will enjoy above average for the rest of May. 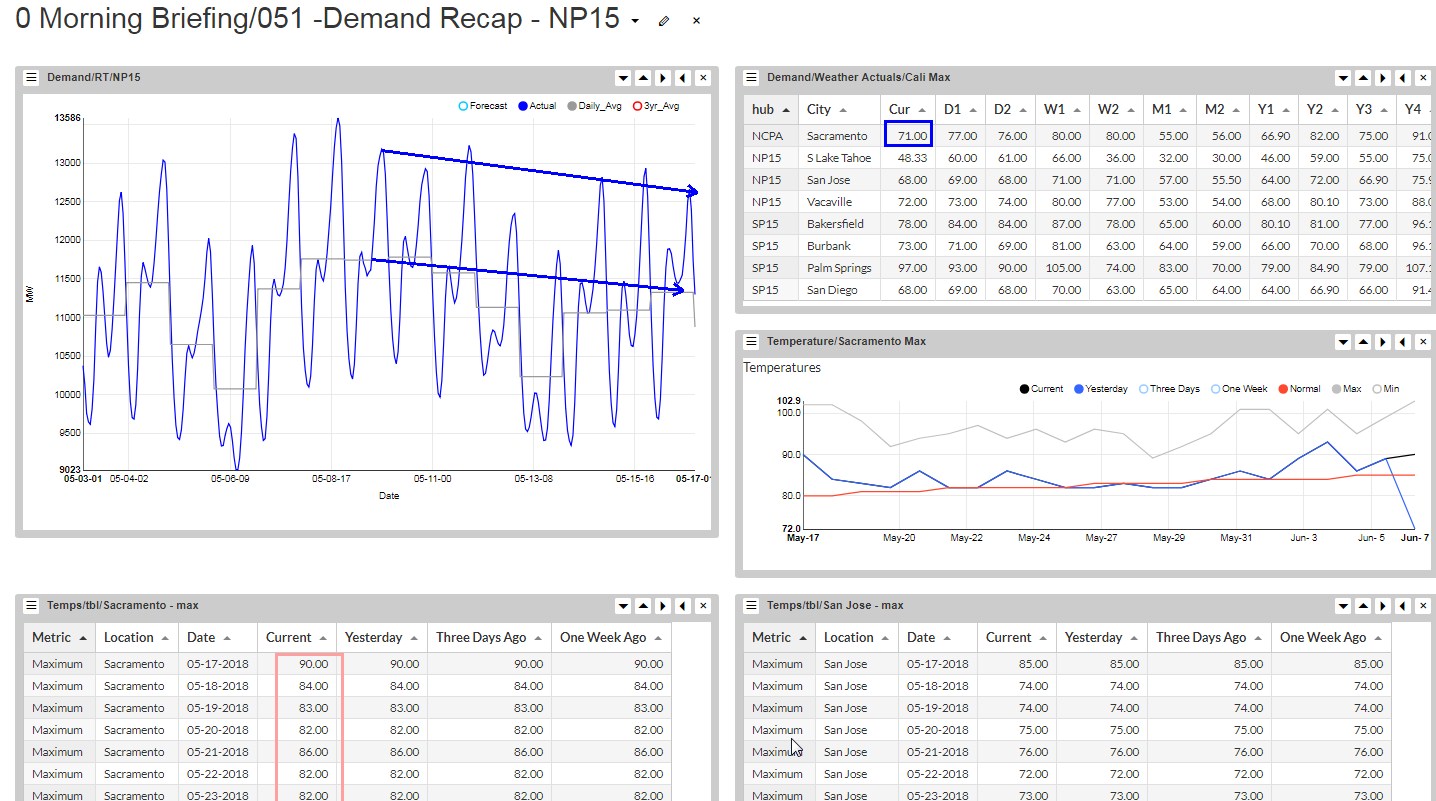 NP loads are off, too, but Northern California doesn’t get hot like Palo; at best it just coasts through BOM at normals. 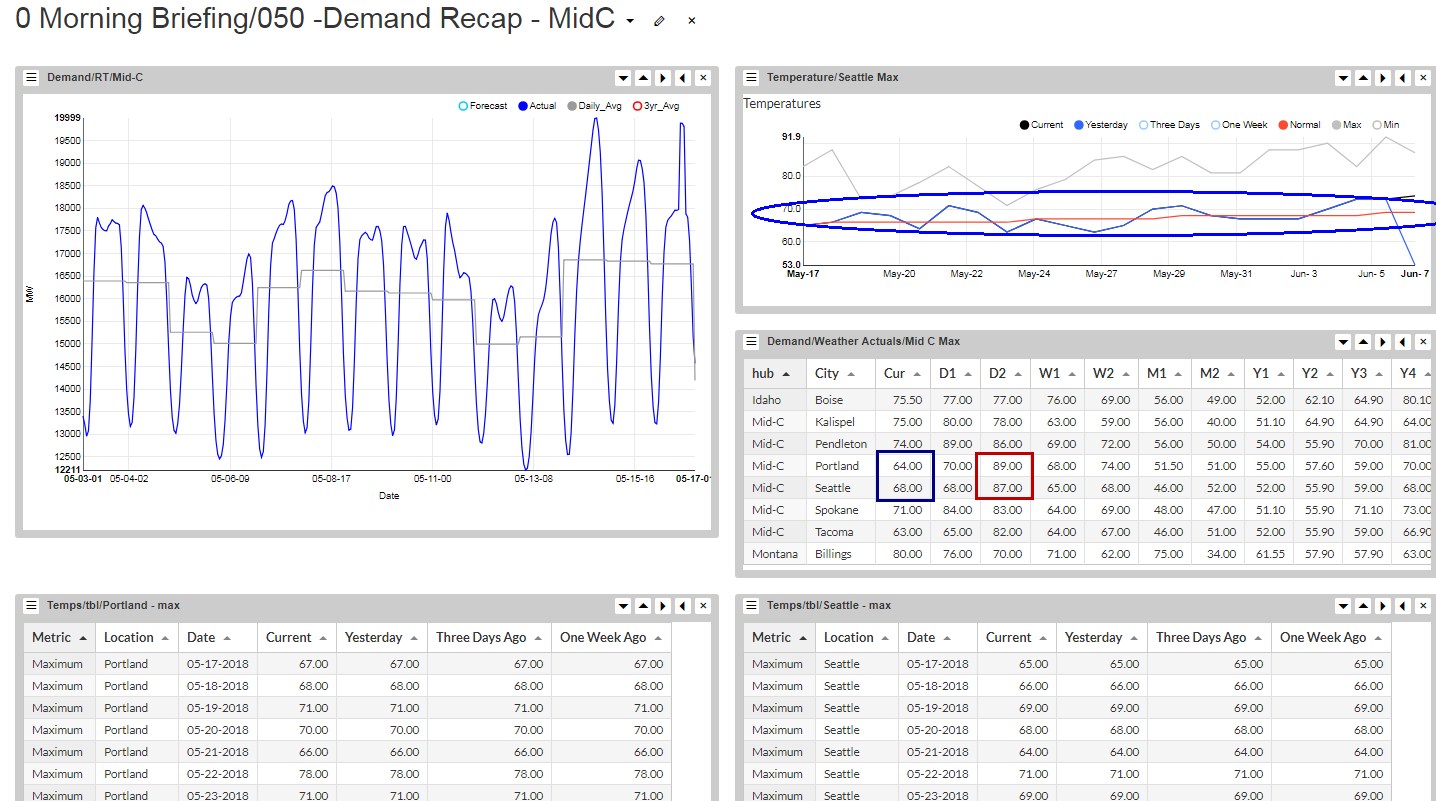 The Northwest’s forecasts are remarkably unremarkable – just about normal from here to eternity. No more big heat to wipe the snow, but most of the snow has already been wiped; now no significant heat to drive demand.

The Northwest’s markets were saved by a dearth of wind over the last couple of days, but the ISO realized robust renewables.

We, and you, are about done with Water Year 2018. It was a fun one, but it is mostly relegated to the history books. The massive anomalies have literally melted away leaving robust flows across the regulated Mid-C. 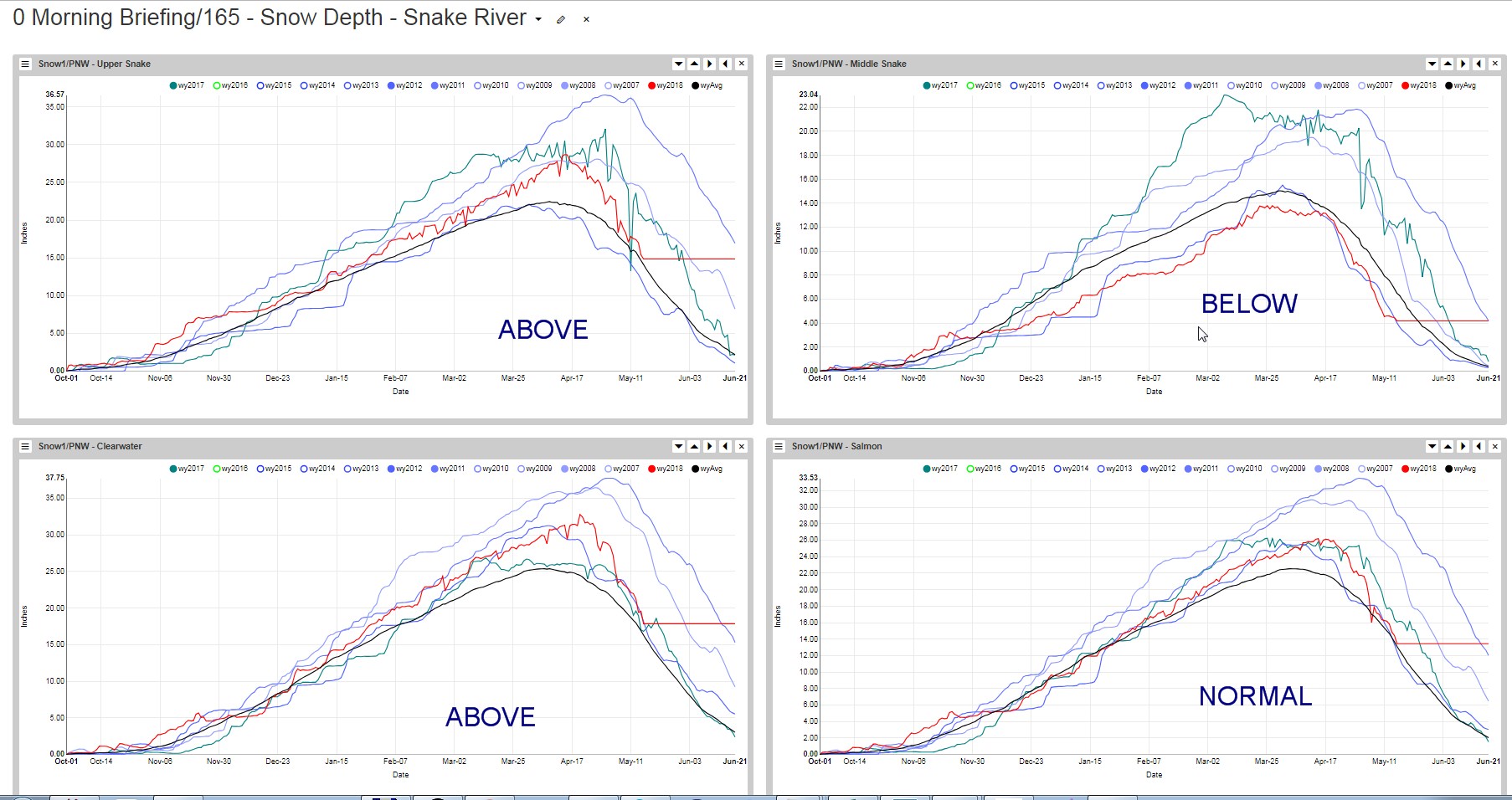 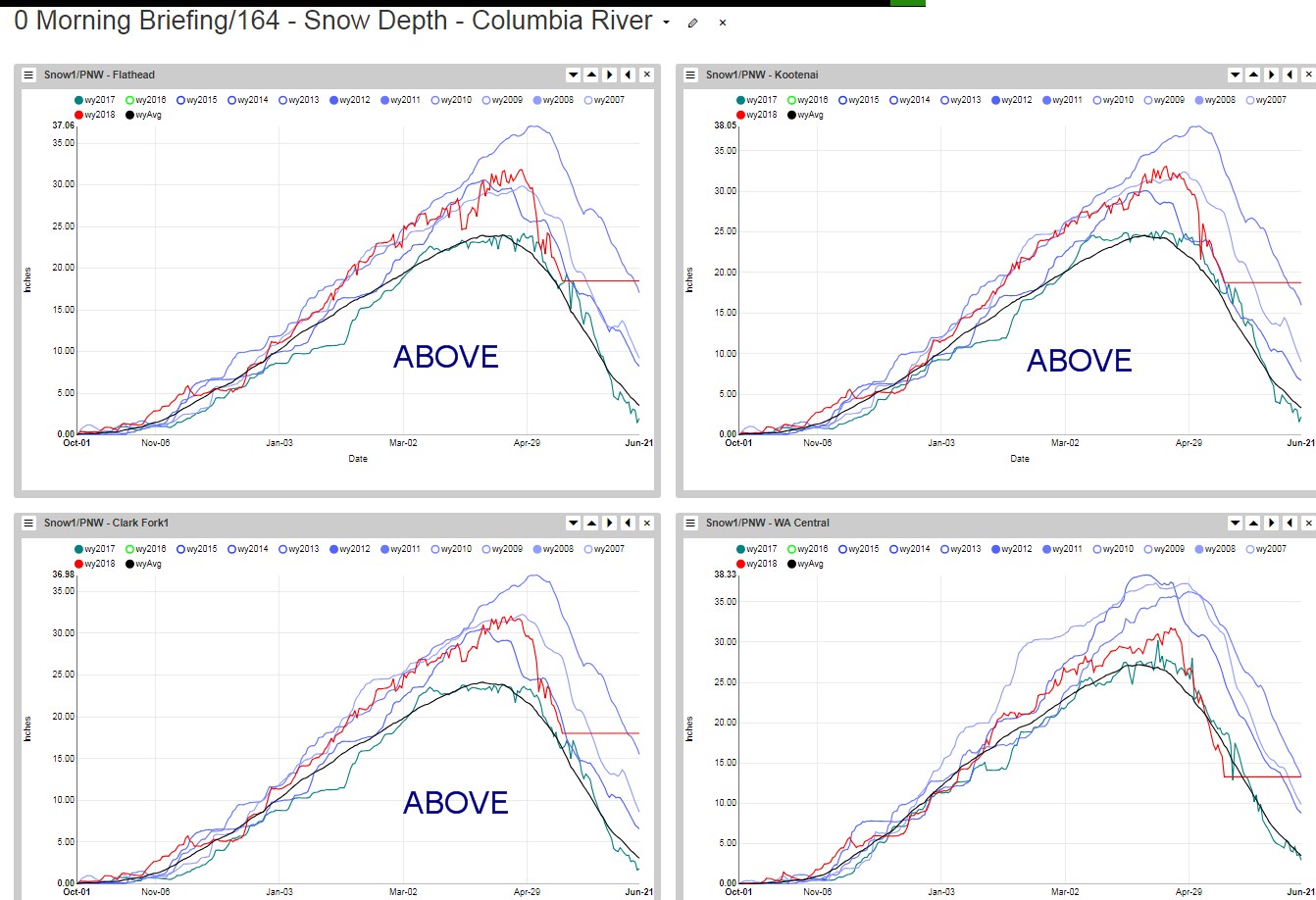 Most stations above Coulee are still slightly above average but the total snow has cratered. 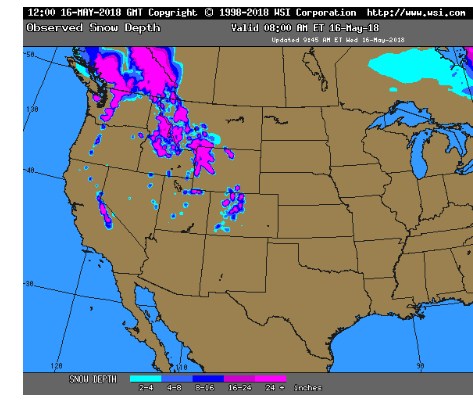 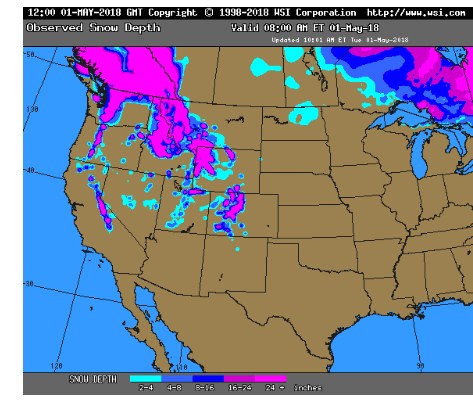 See what I mean, snow’s surface area is about 25% of what it was on May 1 all of which means the enormous flows are one for the history books. All that is left is the upper elevation. Still, the state of the state is amazing. There is so much water coming down at the moment, but sadly most is spilled, even at Coulee:

Like 100kcfs at Coulee, a record-approaching spill. So what, you say, the plant is at hydraulic capacity, what else are they going to do with it? Hey, how about store it in Lake Roosevelt?

For the last week, BPA decided they’d rather watch the laser light show at night then fill their reservoir. For the last five days, Coulee didn’t add a foot of water but spilled 100kcfs/hour. Go figure, but buy June because prompt just got a lot more bullish because of this reckless behavior.

We mentioned the astounding quantities of water flowing through the Northwest, check out McNary (Lower Columbia):

That is almost 500kcfs, but alas, 80% is going over the spill gates. Whatever happened to dissolved gas in the river, back in the day the Corps forced BPA to run water through the turbines to save the fish; seems they don’t care anymore or maybe the salmon have grown to like swallowing nitrogen bubbles.

A new AC derate, at least new when compared to a week ago; no changes on the DC. 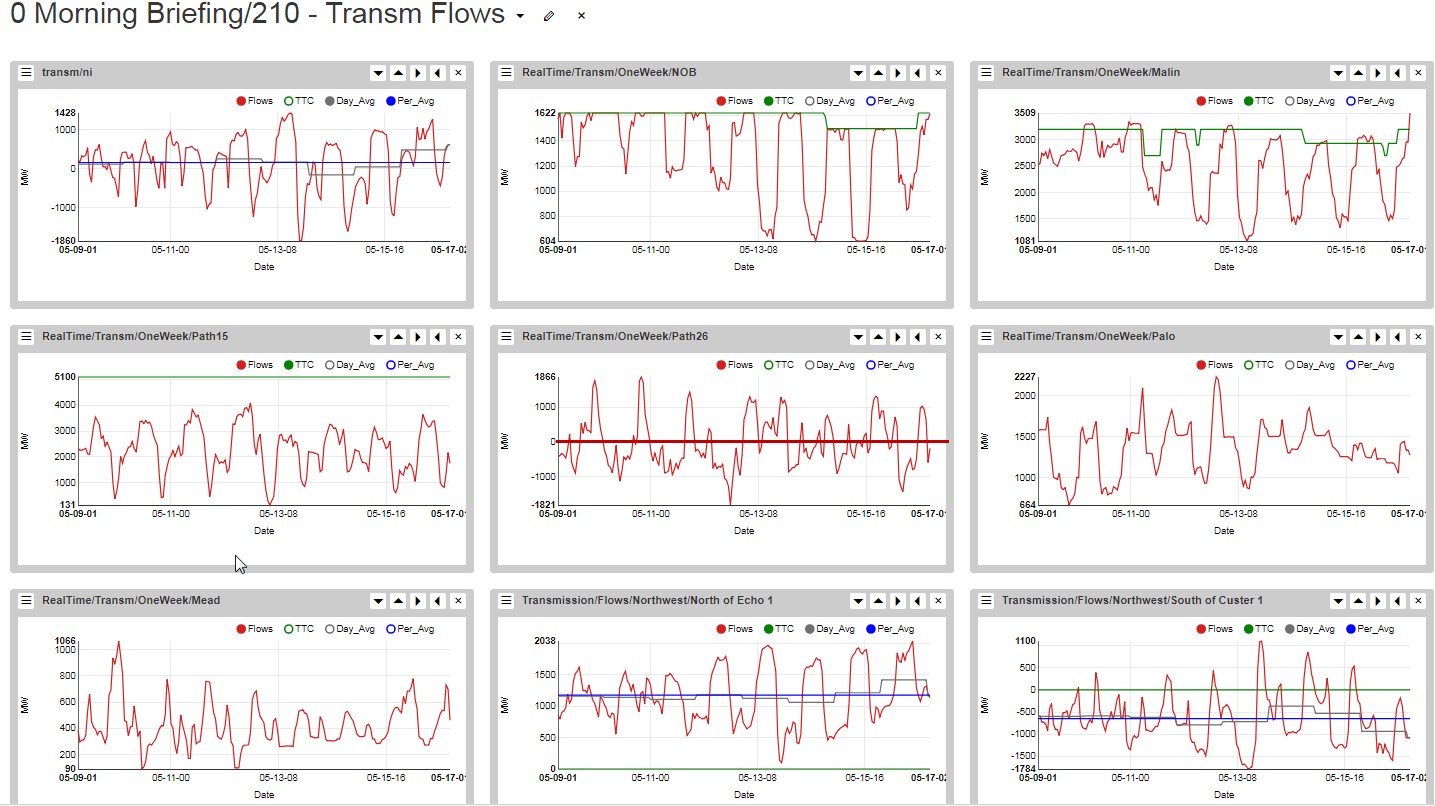 Note net energy on the Northern Intertie is zero, and note the Northwest is selling its soul southbound to the ISO regardless of the abysmal LMP prices. Flows out of ZP are more northbound than south, reflective of the SP bearishness.

It’s ugly out there what with shifting paradigms and spilling water. In a subsequent post, later this morning, we’ll look at the market.