Around February I post on the Mid-C front curve each time I blog on APT. Around now, the middle of May, I drop the MidC because the water year is effectively over. The really big moves are done, now they are being recorded in our history books or memorized to be shared later, around the campfire.

In other words, today is about APT Back. Let me share what this APT Blog is all about, for our new clients. On Monday, we post on the front, defined as 12 months and in, all monthlies plus BOM. On Thursday, we post on the back, defined as Qs and Cals out five years. Both use APT, Ansergy’s proprietary term market ranking system. The charts I’ll share in these APT posts are some of the more exciting market moves. The purpose of the post is to point out potential opportunities, or traps.

I usually do about ten products, in no order, and each has a price and heat rate chart. That is a new feature as we’ve been finding an increasing number that are not parallel. 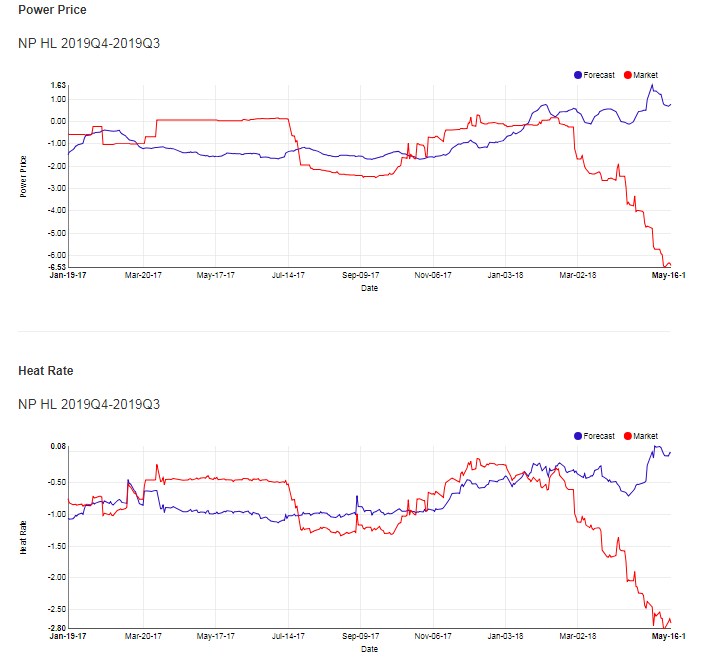 This, the NP 2019 Q4|Q3 HL roll, is parallel and at a contract low. Remember, we are talking a year out; what would drive the roll to make such a remarkable move given we know NOTHING about 2019. Oh, I know …. 2018 moved in the same direction. The term market did, not realized, we haven’t realized any Q3s, let alone Q4s, yet. Think Paradigm Shifts that are driven more by randomness and error than logic. Oh yeah, this is NP, so don’t blame it on Socal Citygate witchcraft. 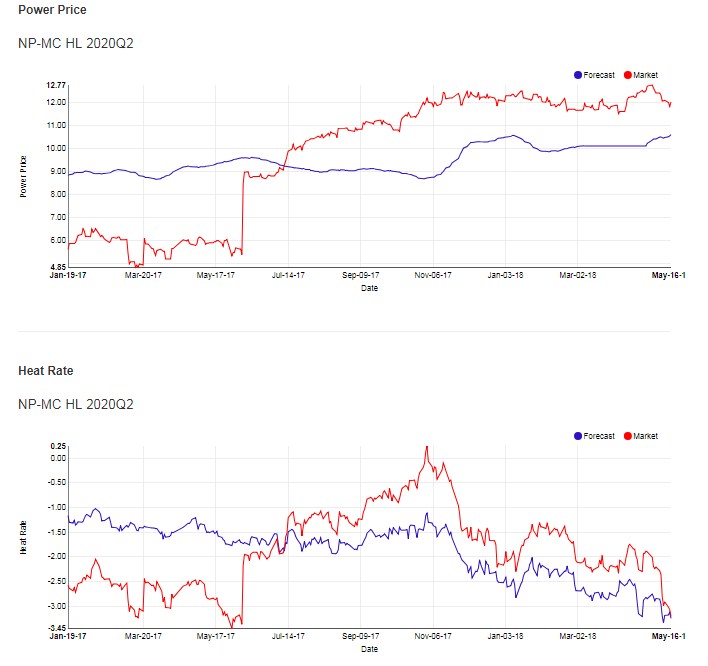 We’re staring way out in the curve, all the way to 2020, in this NP|MidC Q2 HL spread. One oddity that caught my eye – the market power price is over the forecast, but the market heat rate is lower. Also, the heat rate, since October, has moved in an opposite direction to price. Because the forecast did the same, that is what it should do, but the most recent crash suggests over-sold? 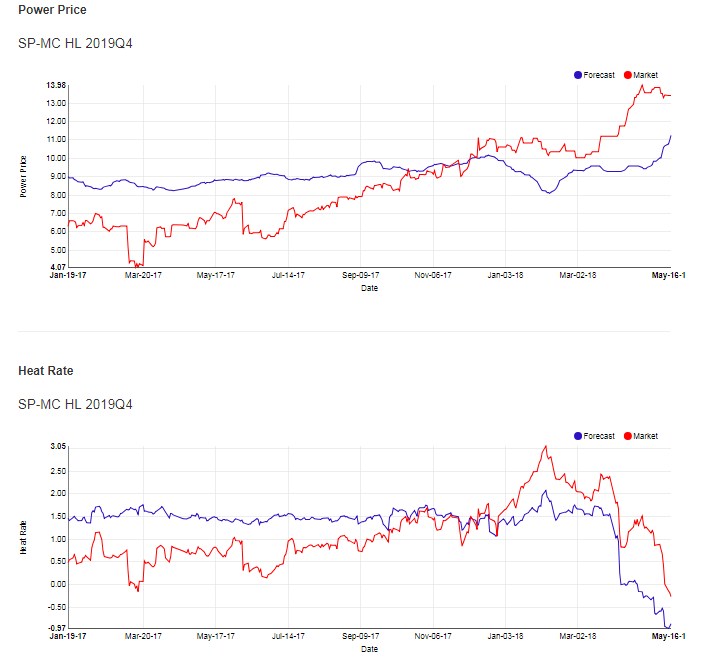 This is the SP|MidC 2019 Q4 HL and another example of heat rate and power price moving in the opposite direction. This makes more sense because SP is one of the legs, but still there is an opportunity. The price of the spread has moved much faster than the forecast suggesting over-bought. In the back of the curve, the forecast doesn’t change except for gas price and an occasional tweak rendering it an excellent “value barometer”. 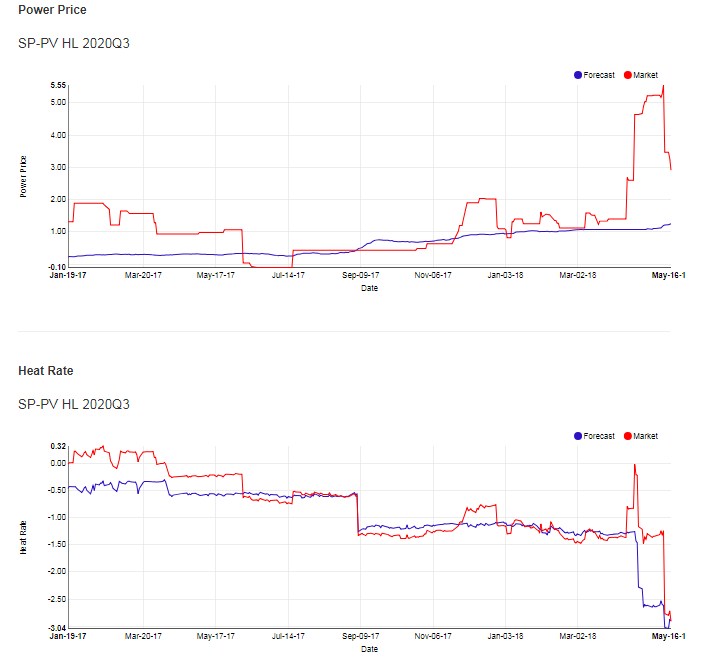 Back to 2020 (how many of us will be still working for the same company by then?). This, the SP-PV Q3 spread is odd. For one, doubt it even trades, these are Platts (e.g., ICE) made up marks, until you see these violent moves, then those are most likely trades. You could argue this is all gas driven, but you’d lose the argument. Note the forecast price doesn’t budge while the market soars. Both forecast and market heat rates tanked in parallel, though the forecast anticipated the drop three weeks before the market eventually woke up. 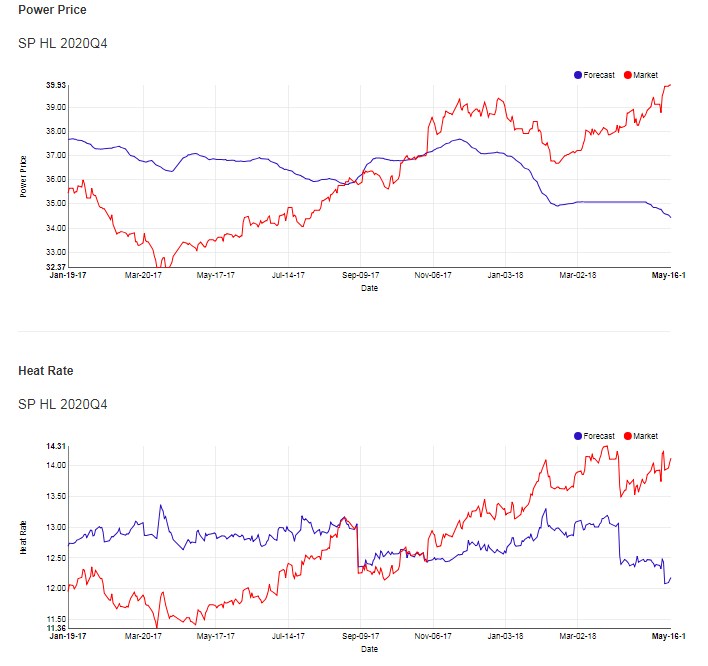 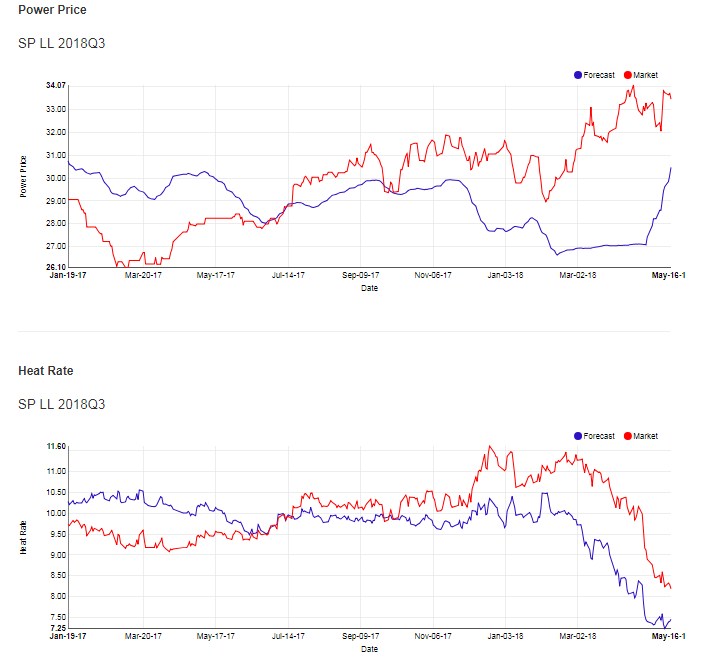 This is an example of an appropriately priced, gas-driven, strip. The price soars and the heat rate tanks. And, for the record, I seriously doubt we’ll see Q3 LL settle at $35.00 – we can’t even get BOM HL to clear $20. If there are problems in paradise, it will occur in the HL, not the LL. I wouldn’t be surprised to see zero gas on the margin in most LL SP Q3 hours. 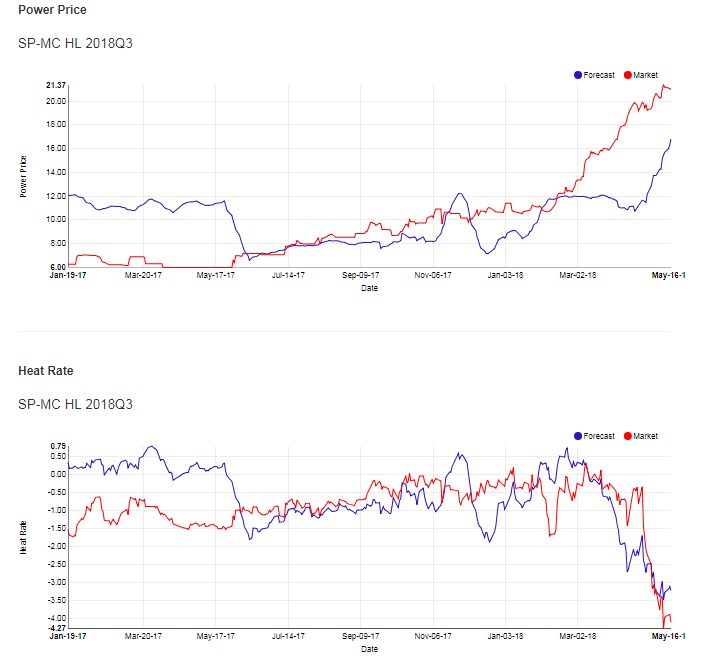 The granddaddy of all spreads, the Q3 SP-MidC HL, and oh what a spread it is. Now it’s trading with a $20 handle -wow! On the surface, makes sense, though, given that Citygate is a bitcoin and the MidC “had” a massive water year. However, if there ever were a time to man-up and short this it would be today for the following reasons: 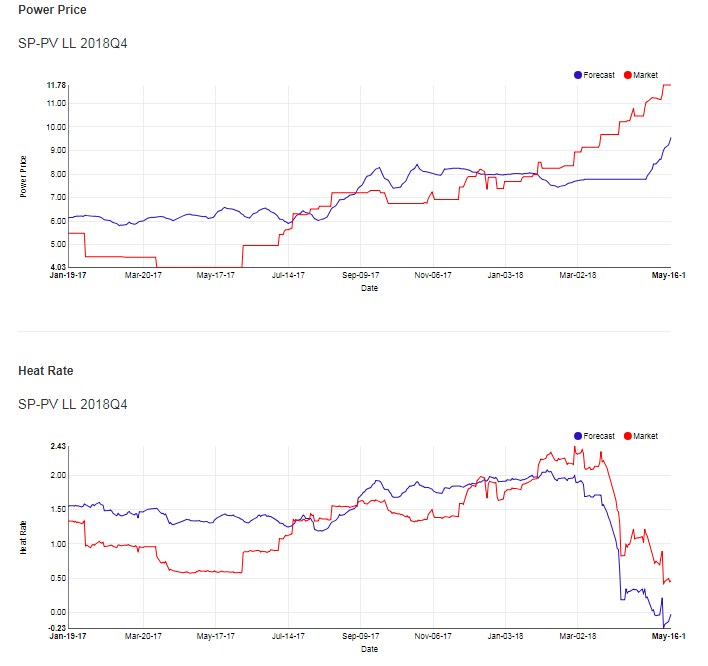 More SCG issues, but does anyone really think SP LL will clear $11.70 over Palo for the entire Q? 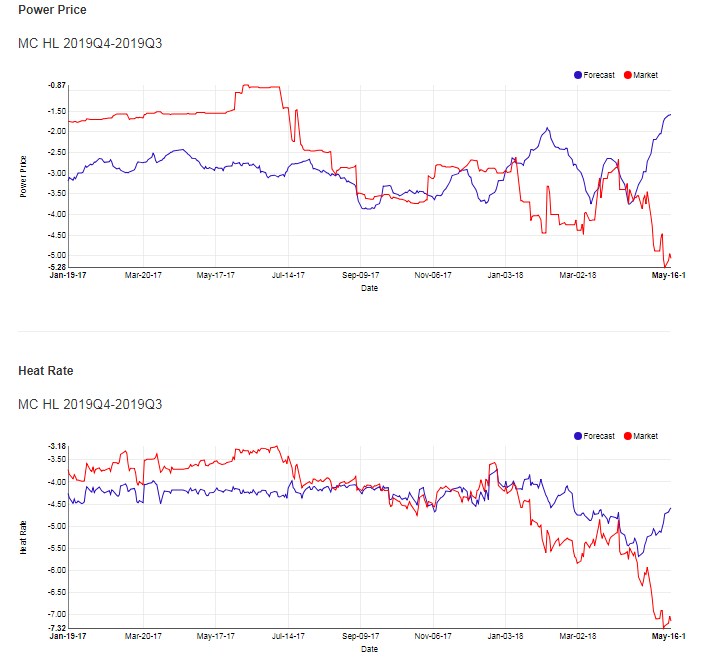 A bold move to sell this roll to contract lows when we’re more than a year out. There isn’t any fundamental reason, aside from that is what the market did for 2018. 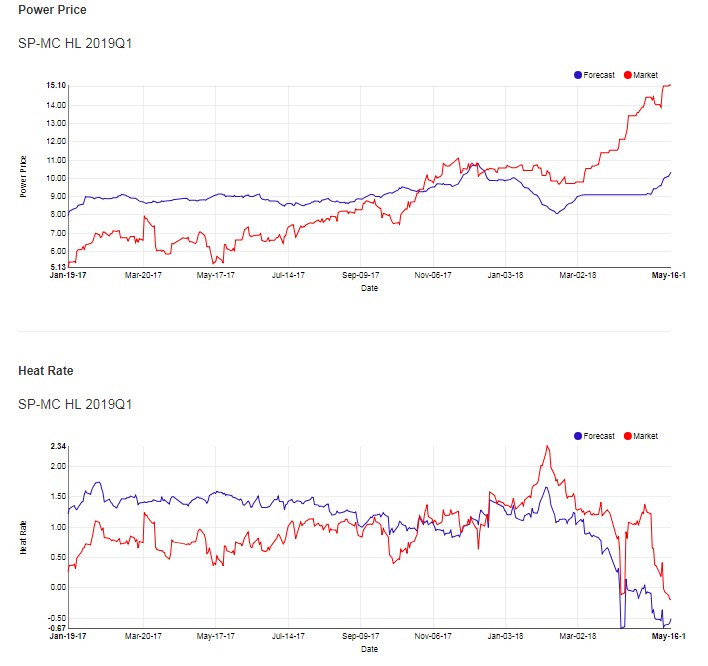 If you are long this, you are just betting that Socal runs out of gas in Q1 and a string of days trades >$20/mmbtu. If that doesn’t happen, you’ll be left holding the bag as this is about 35% over-priced without those blowout SCG days.