It is hard to find anything in the WECC that is bullish, but there are always silverish linings and, unless the glass is empty, it is partially full. We’ll look today, let’s see how creative we need to be. 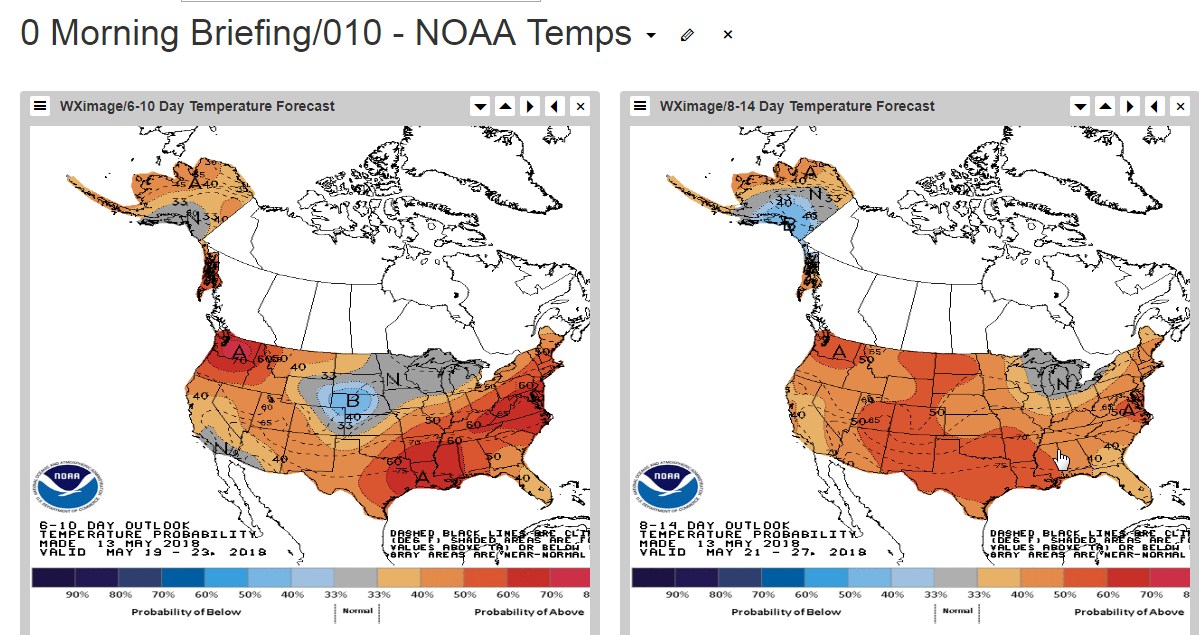 Well, NOAA is bullish as of Sunday, kind of; there is a lot of brown and even some reddish brown in the Northwest. But alas, warm in the Northwest is maybe more bearish than bullish as it melts snow faster … we say maybe, perhaps all the snow has melted already? The rest of the WECC doesn’t look too “hot” this week, maybe better next week. 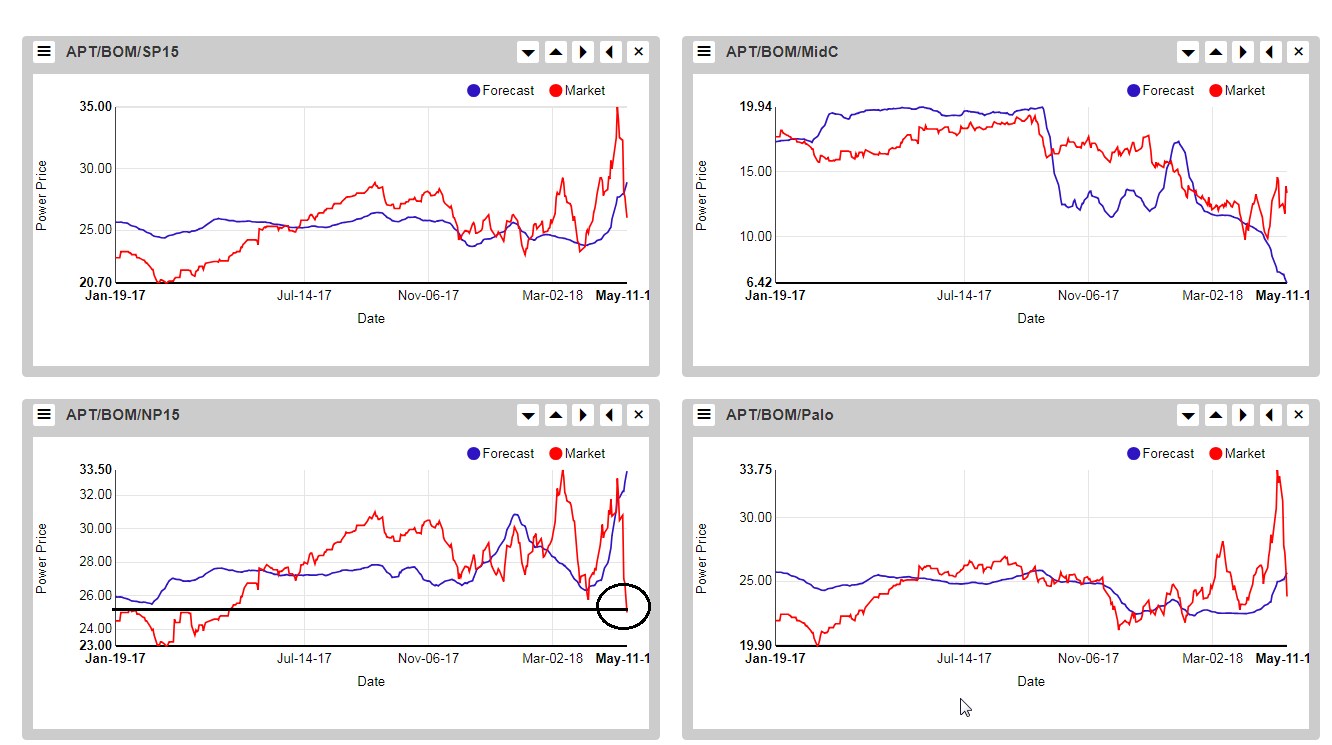 Most BOM markets are setting contract lows, or near those, for price. Markets are just a mirror of the fundamentals, sometimes, so this set of charts just confirms our bearish theme. You agree. 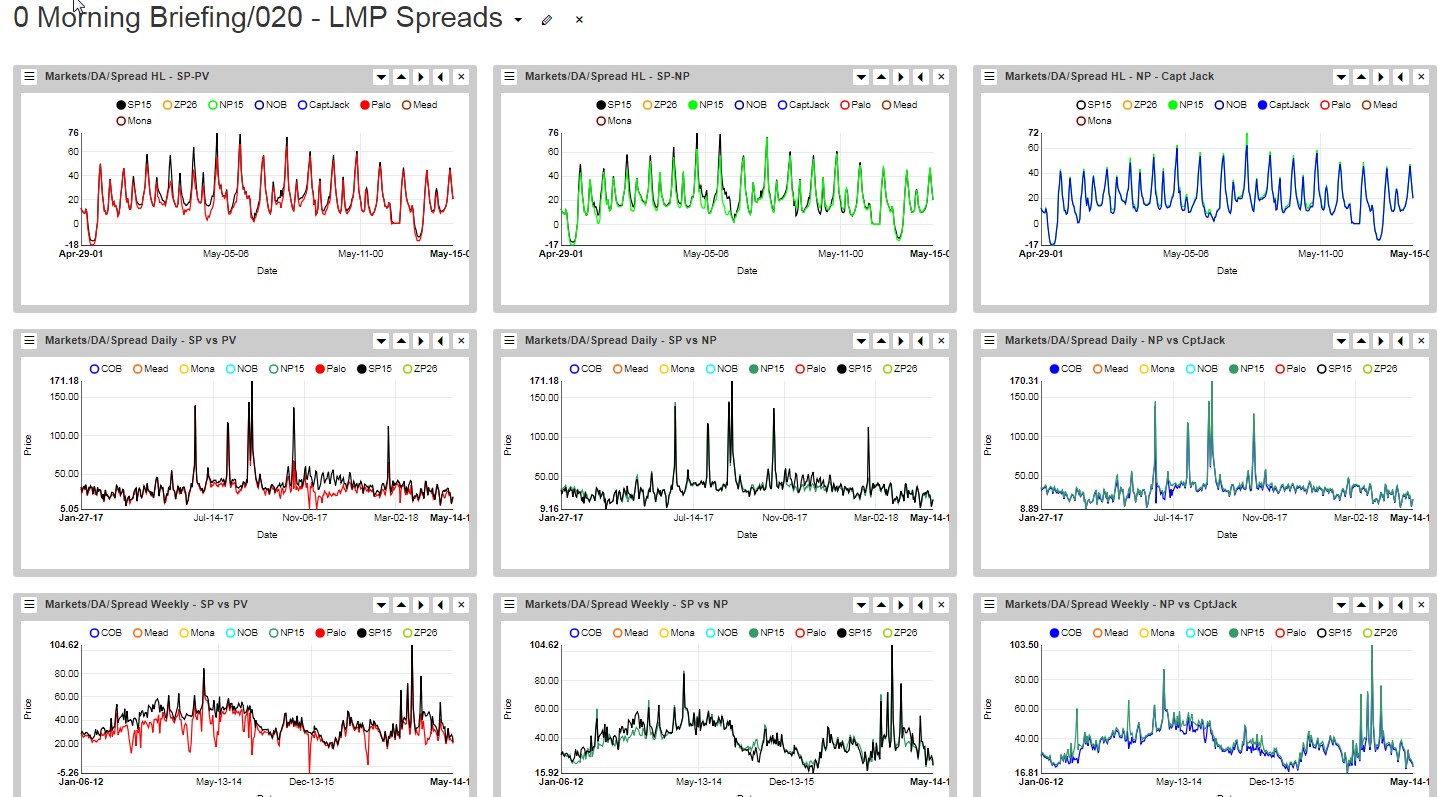 No blowouts, those significant summer premiums are feeling top-heavy, huh? 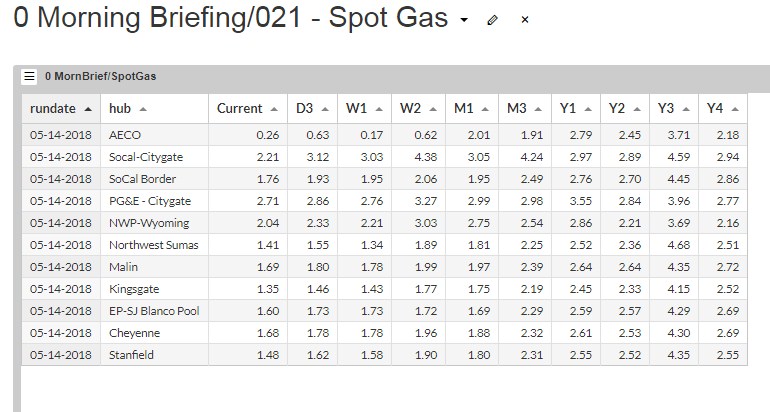 These are the Dec and Nov SCG contracts- crazy bullish, too bad there aren’t any near-term fundies to support these new prices, though just a few days of $20 or $50 or $100 do just that. Or they don’t and its all hype. 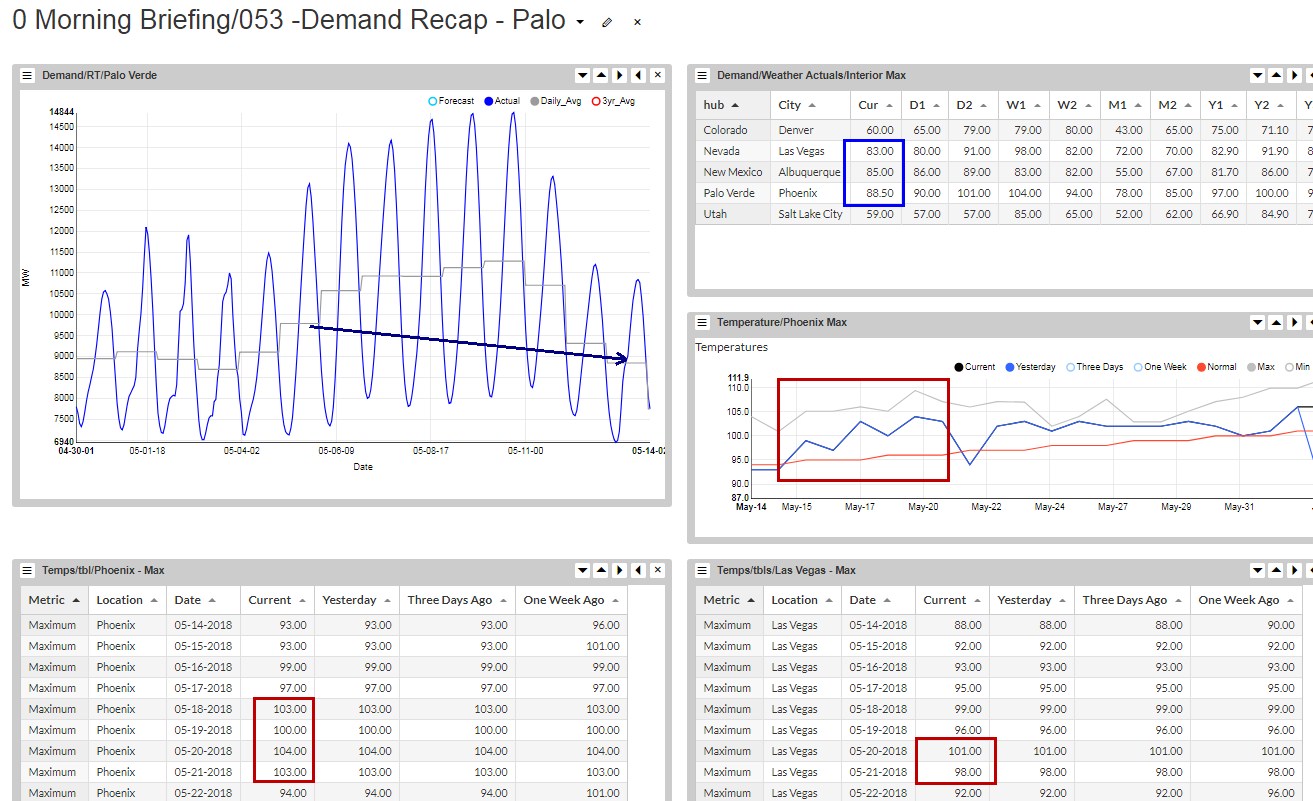 Palo has been weak the last few days, but a new heat wave sets in, more temperatures in the mid 100s in store for later this week and over the weekend. Too bad the rest of the WECC can’t join the party; how fun can a party get when there is just one in attendance? 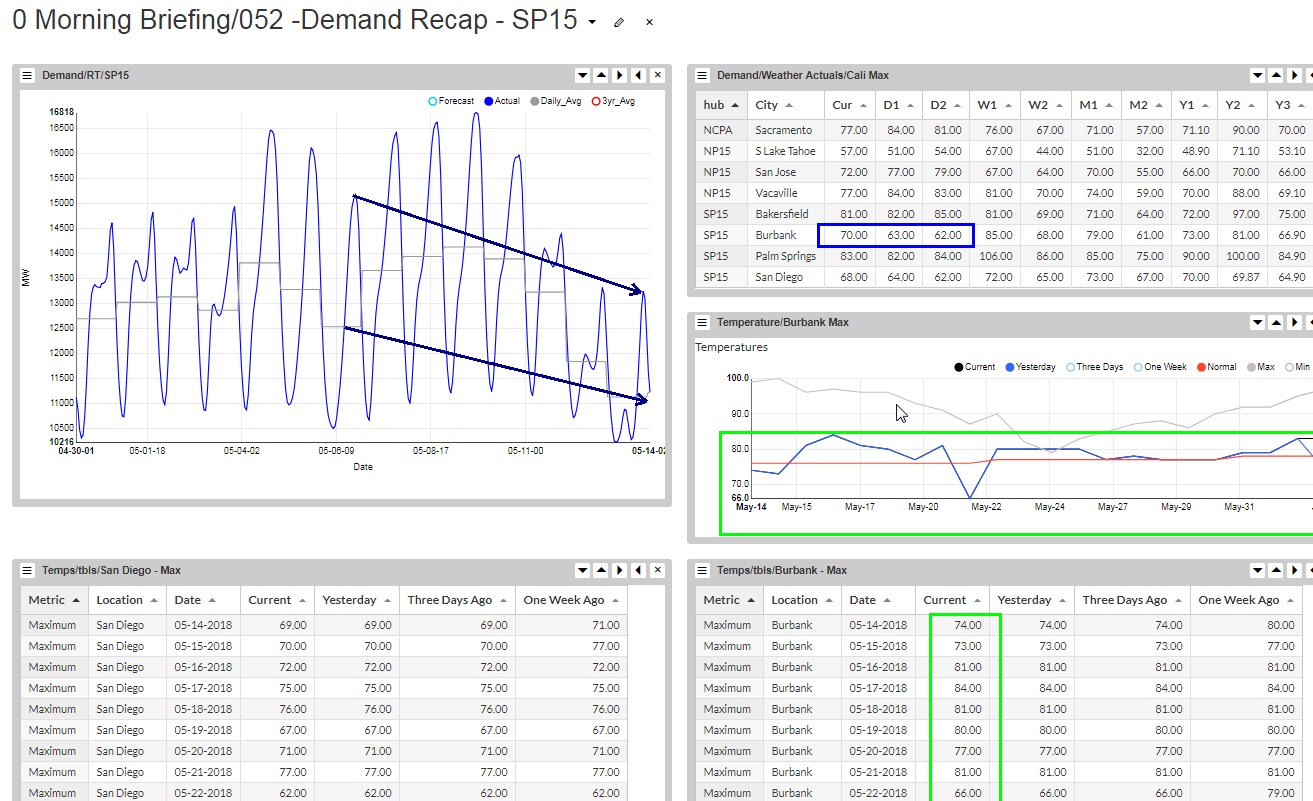 SP’s invite got lost in the mail; the hub is looking at ten days of temperate temperatures; check out the blissful weather in San Diego! Meanwhile, SP’s loads fell off a cliff; a cliff that was at best at sea-level. 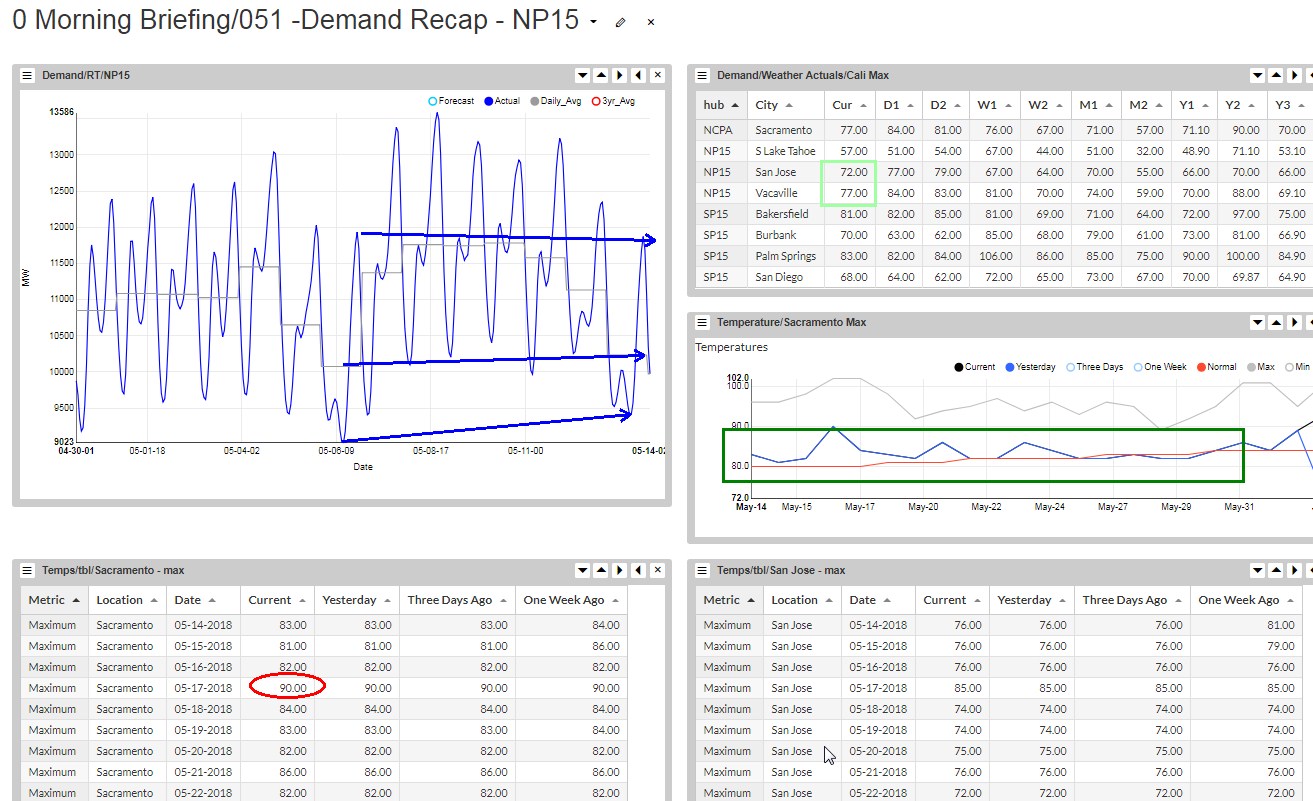 Sacto has some hints of heat, but barely and of short duration. Loads are sideways to off, nothing demand-wise to make one dance a jig of joy. 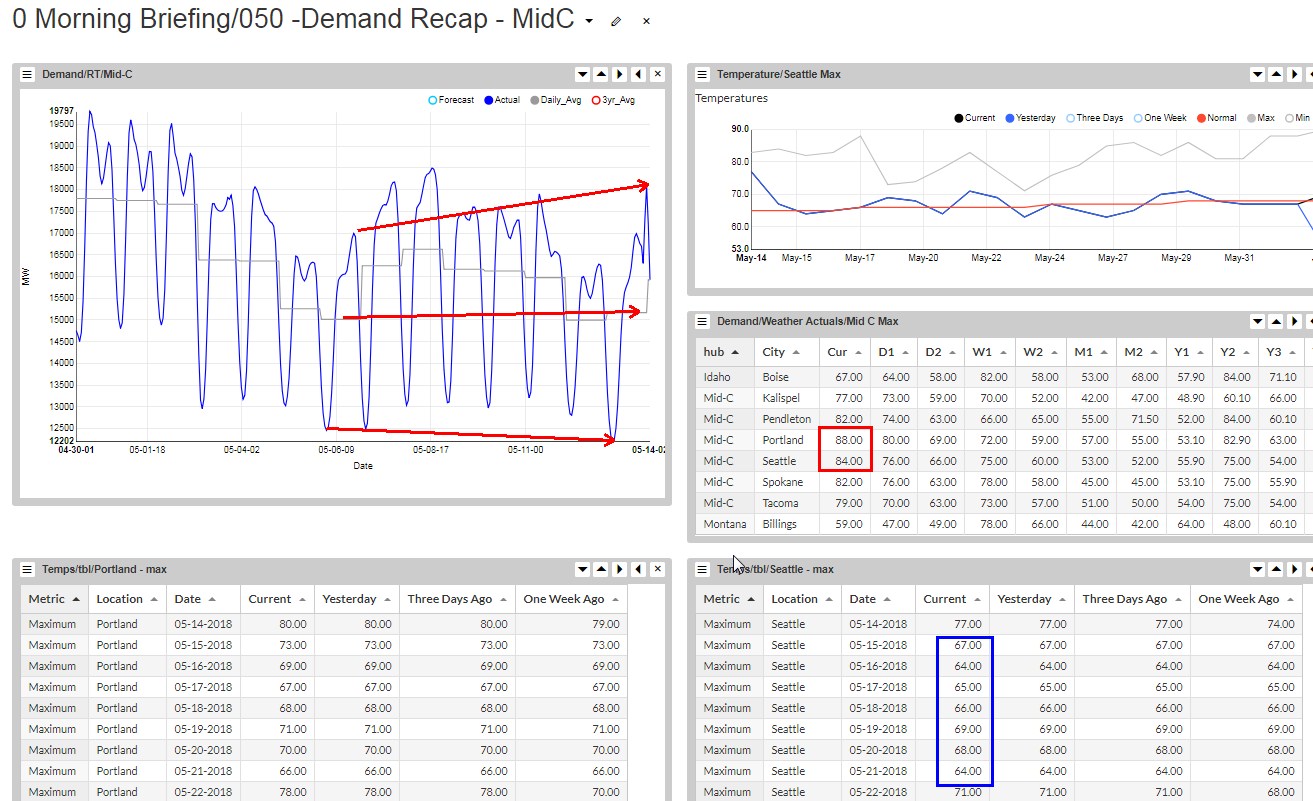 The Northwest saw a surge in demand yesterday off of the mid-80s in Portland and low 80s in Seattle. And you didn’t think we had air conditioners up here – hah.  But like California, the warm weather drifts back to normal weather which is a no demand event. Think screen doors and  open windows.

With weak loads, we already know generation will be soft, except it wasn’t. Hydro in the Northwest is at its water-year high, today. To add insult to injury, those pesky renewables rallied.

Well, rallied in the ISO; the Northwest saw its wind wind down to next to nada yesterday. The Power Gods are smiling upon BPA – the big ute gets big demand and no wind just when its hydro peaks. 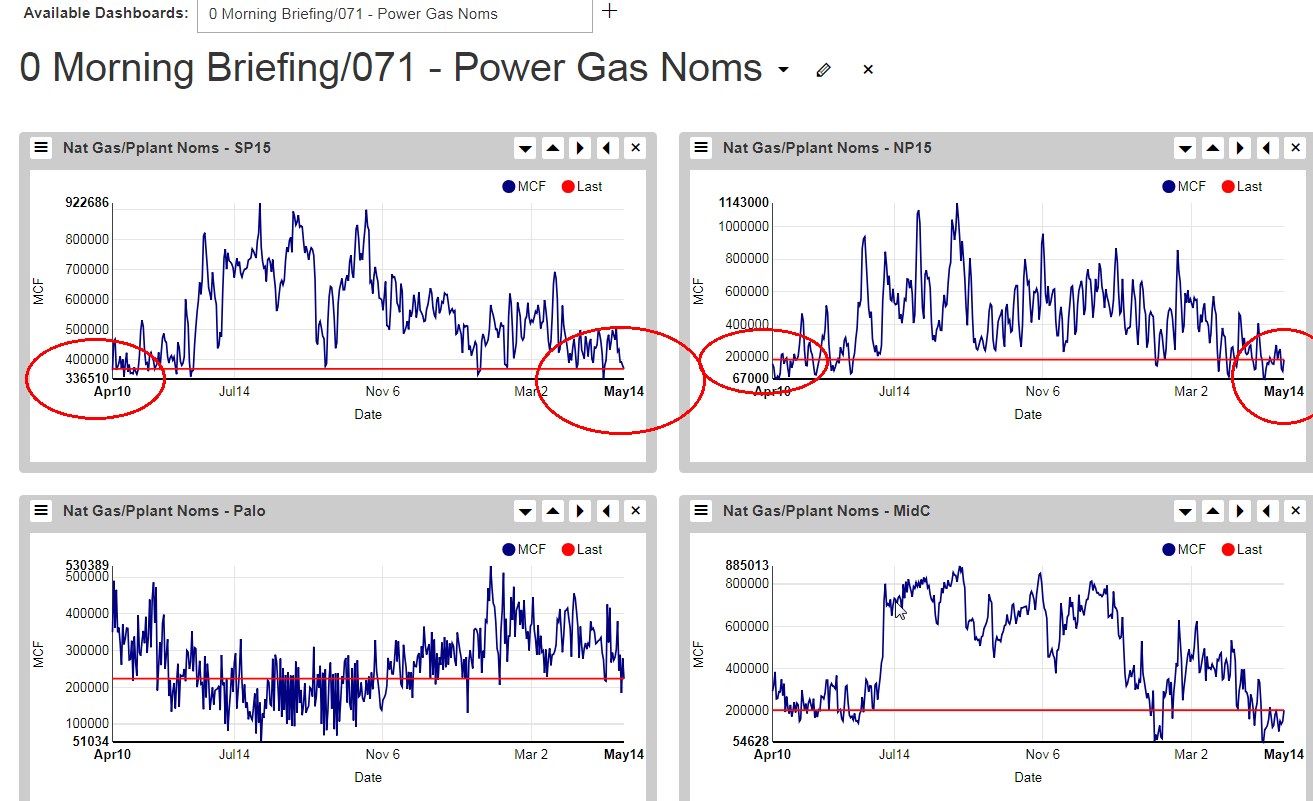 Given all of the above, it should come as no surprise that power plant gas nominations are at a collective low for the year.

NOTE: The ISO’s outage reports have been down since May 4; we have an email into the esteemed agency. Hopefully, they haven’t shut down that report.

It is May 14, and the Northwest’s runoff has been going for two weeks, maybe three weeks. The big question we have is how much longer can it sustain these current levels. Just how big is it, check out the spill on the Lower Columbia: 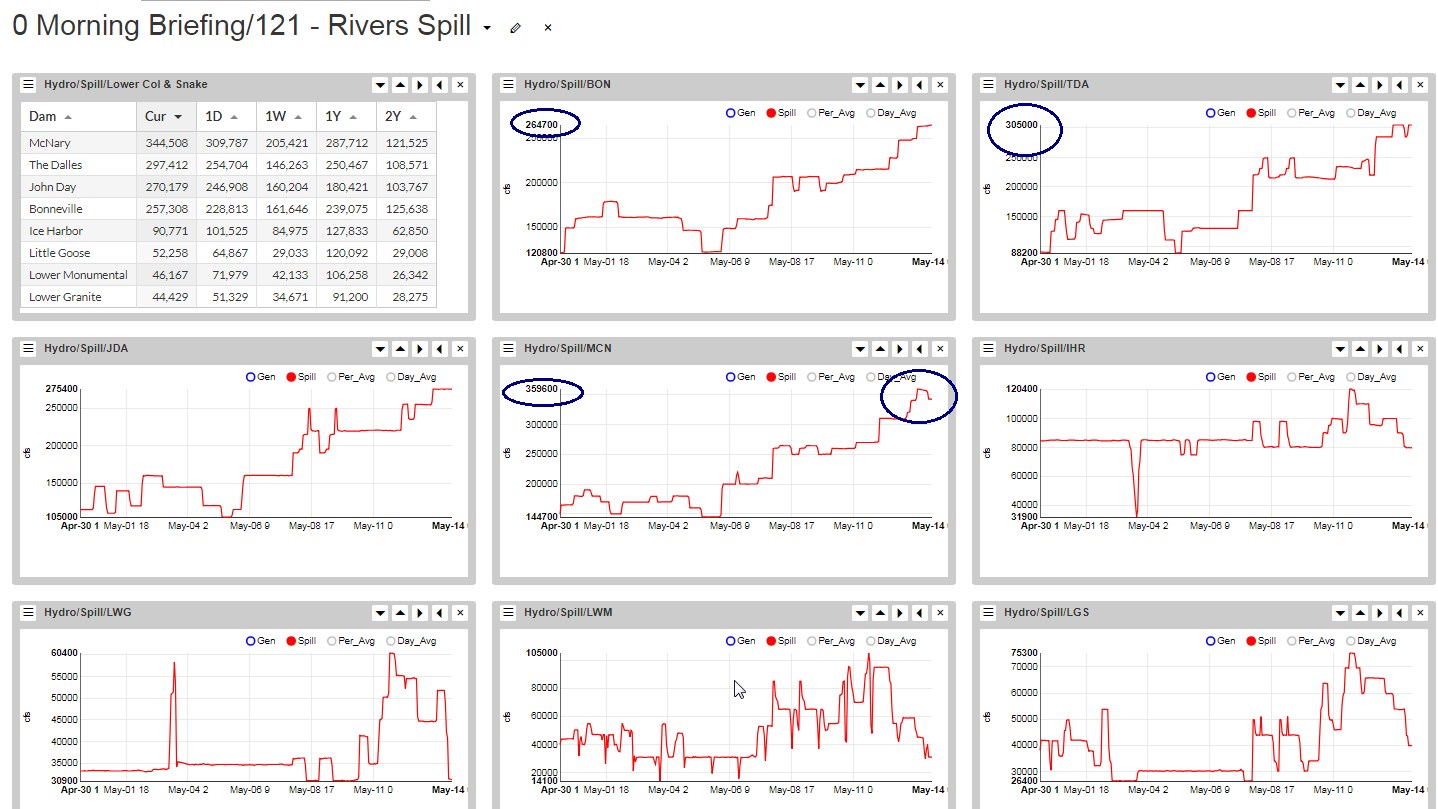 McNary spilled 360,000 for a few hours, all the while passing a 140kcfs through the turbines … that is 500kcfs trolling through the Lower Columbia. We will call that the peak, it is all down-hill from yesterday forward, we just aren’t sure how fast those flows come off, there is still a lot of snow in them thar hills.

All six stations are above average, though the quantity of snow is about 40% lower than the peak. Still, there is more snow above Coulee today than there was last year on the same day, or than there has on average over the last twenty years.  That said, these river basins are all regulated, and there remains a lot of storage yet to fill: 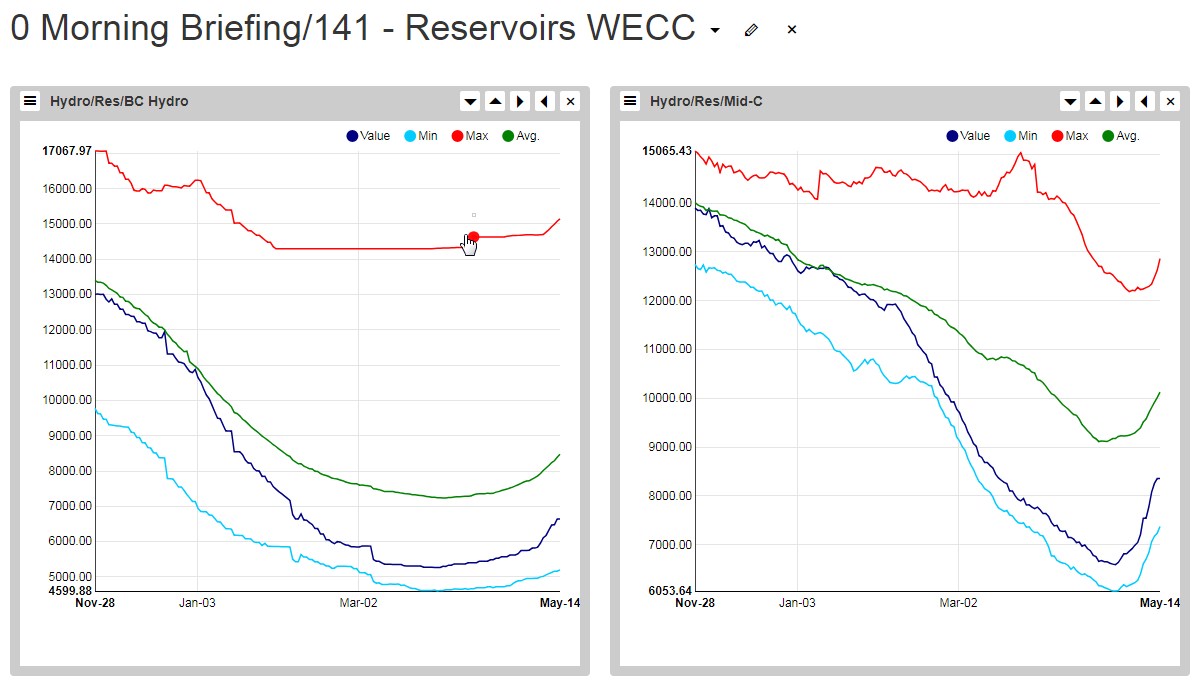 Both BCH and the US Northwest are just getting started in the refill, just as inflows will start backing down. We told you we would seek out something bullish, that previous sentence says it all. To fully understand where we are coming from, let’s look at some more snow depth: 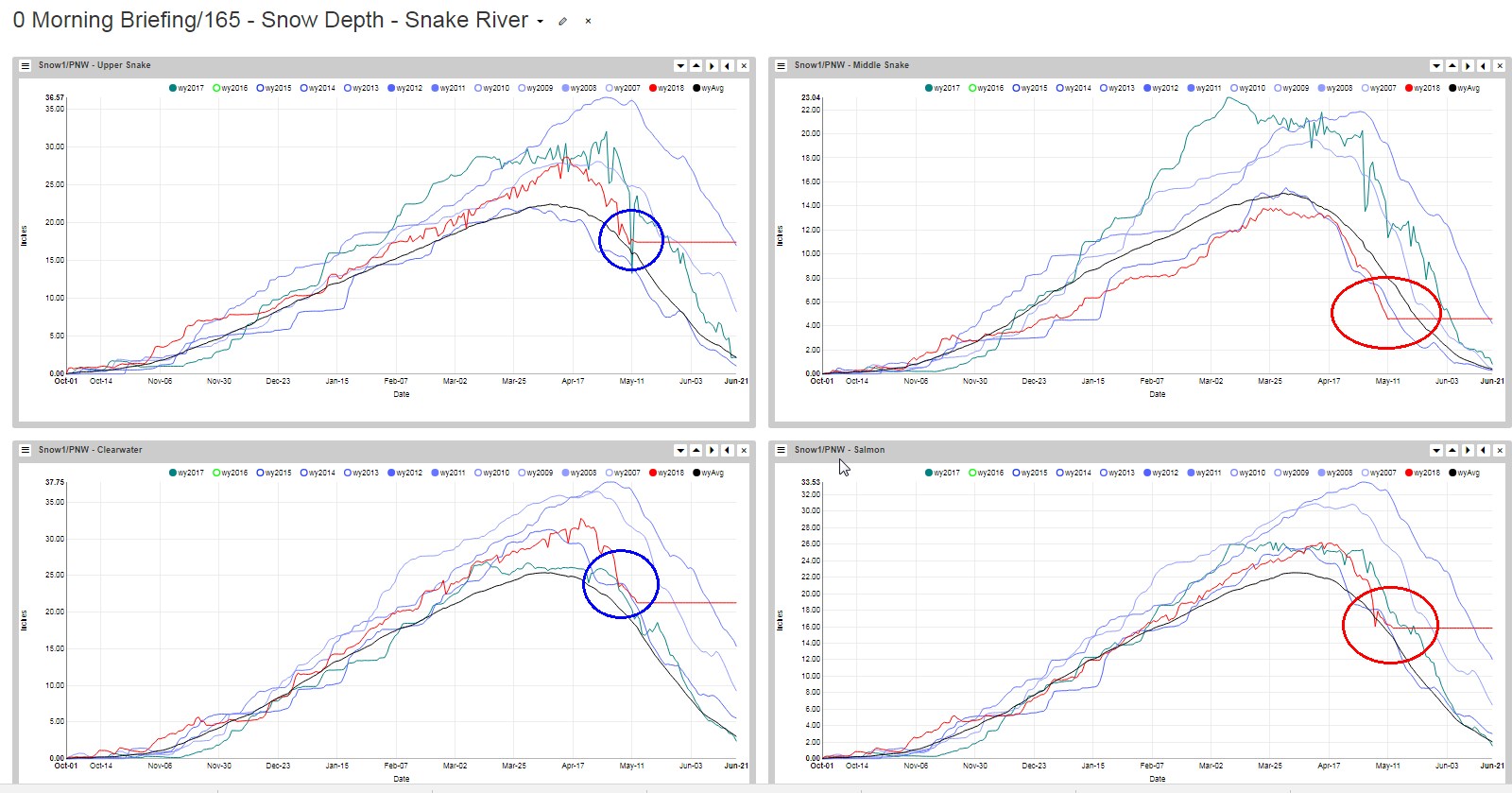 Aside from the Clearwater, the Snake River is mostly below normal as of today; these stations are not at zero, but the premiums they may have had three weeks ago are now deficits.

The Middle Columbia Side Flows are already tapering off:

This index set a ten year high, maybe a 20 year high, but now is off 20% and snow levels are below average. 20% of that 500 kcfs passing McNary came from this collection of rivers dumping into the Middle Columbia below Coulee. Now they are on a steady decline til they drop to less than 10kcfs, collectively.

The point we are trying to make is the “high water mark” for WY18 has been met. But, as we’ve shown, there is still snow in the hills and with cooler temperatures forecasted the runoff will slow. 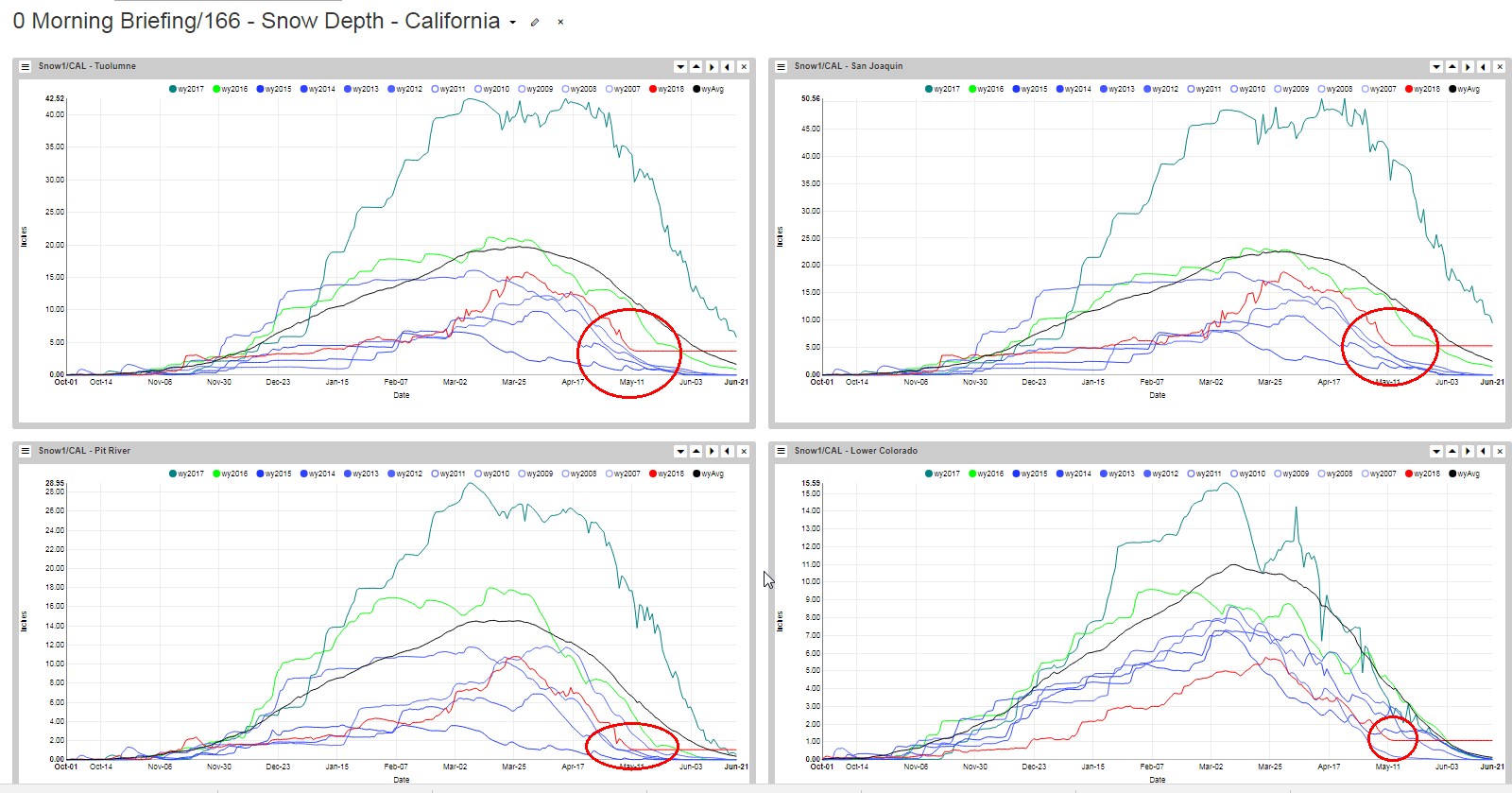 Forget about California; their snow is already in the Bay. And the rivers reflect this: 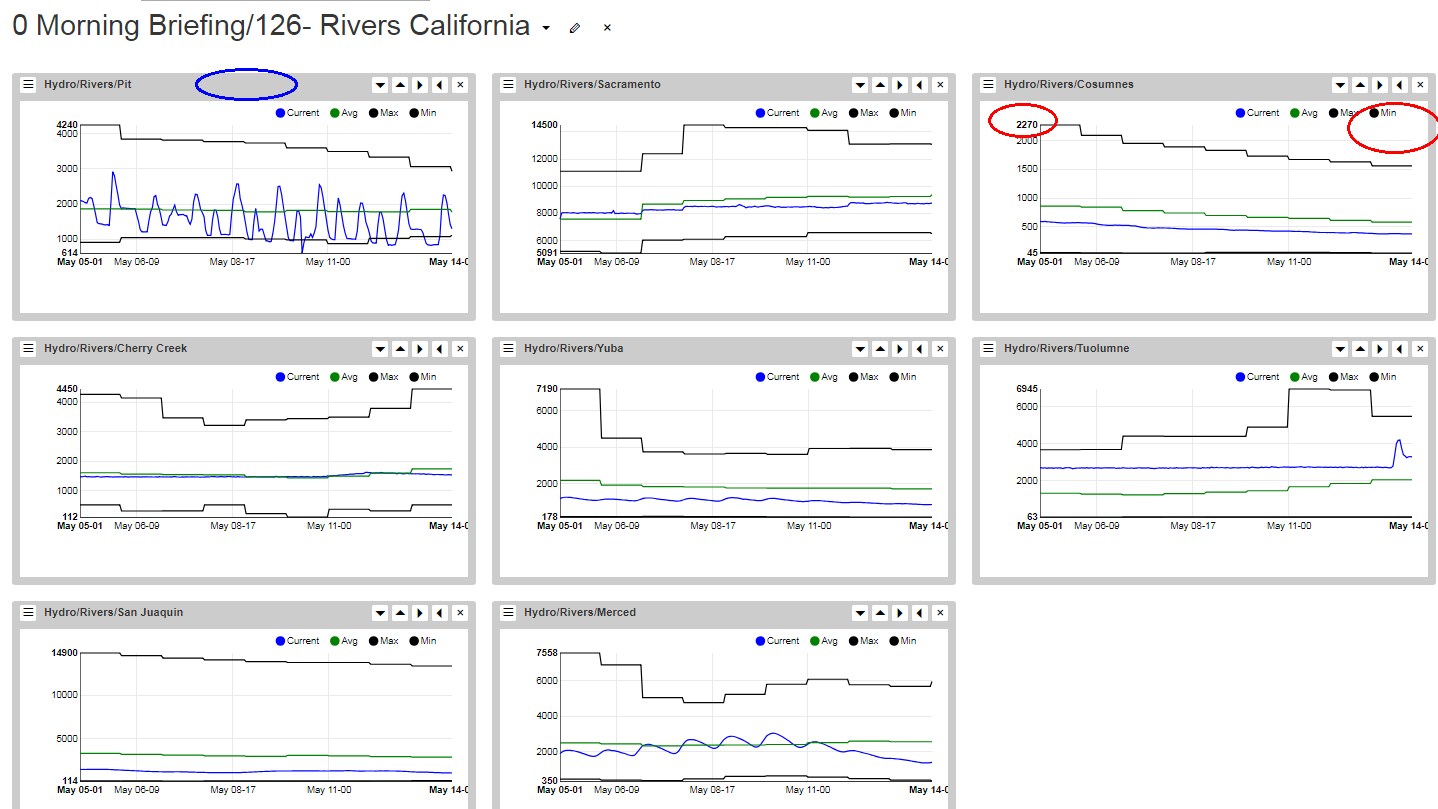 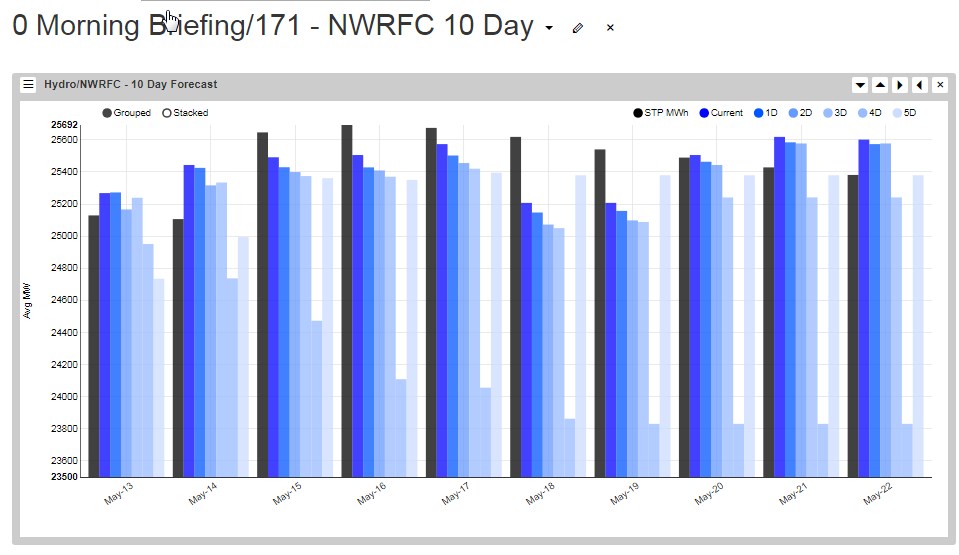 More cuts than not, but we can’t see how May can get backed down much. We do believe the dry and warm BOM has pulled July and August water so wouldn’t be surprised to see both of those months pared back 500 aMW.

BPA has filled ten feet in a few days; they’ll fill another ten feet by Thursday and probably be over 1250′ by the weekend. They need to, the runoff water is pouring into the reservoir, they better catch it now, or they’ll pay later. A few weeks ago we suggested booking tickets to the GCL Laser Show, which is quite spectacular when there is a significant spill. There is a big spill, nearly 100 kcfs over the weekend. 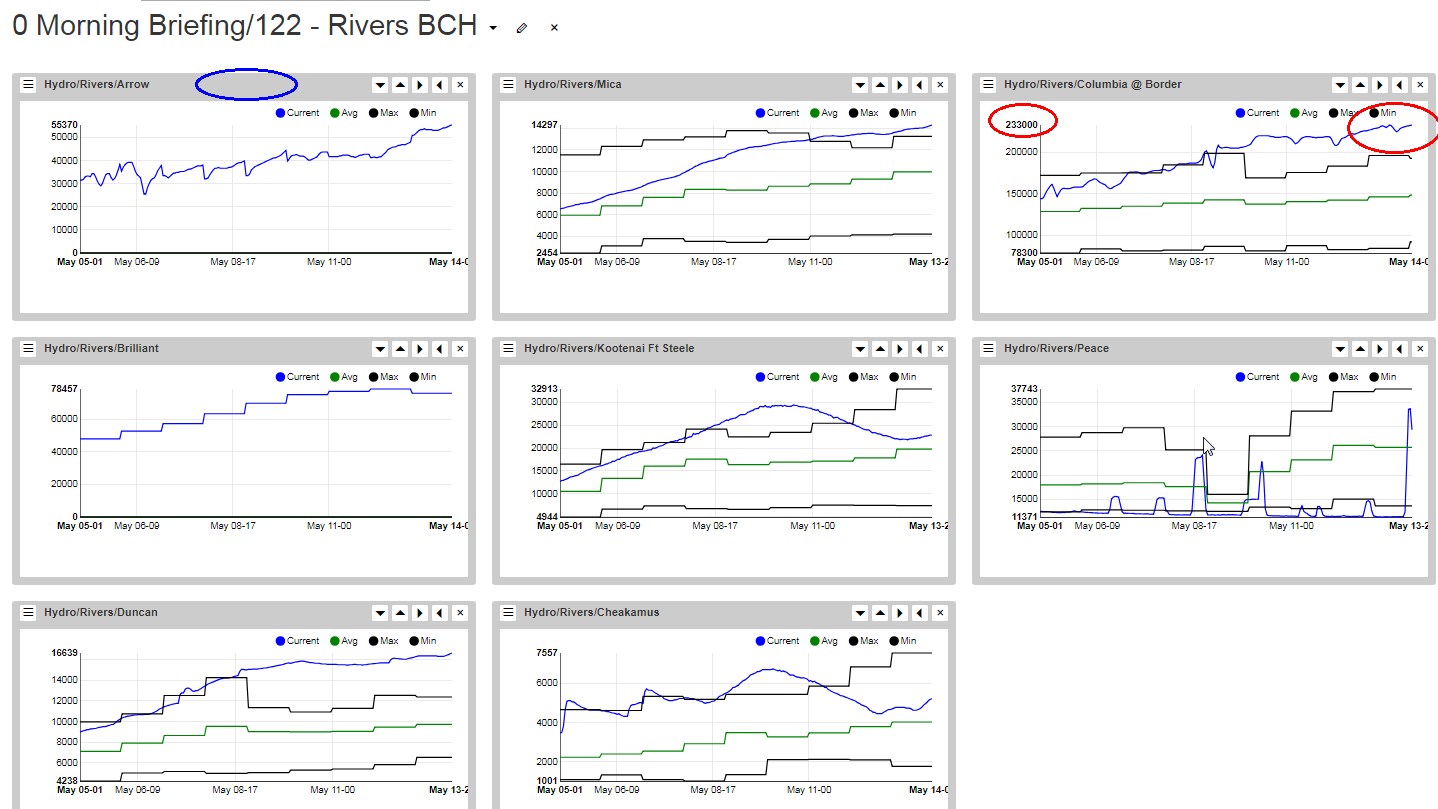 Everything is melting in British Columbia, check out those ten-year highs. 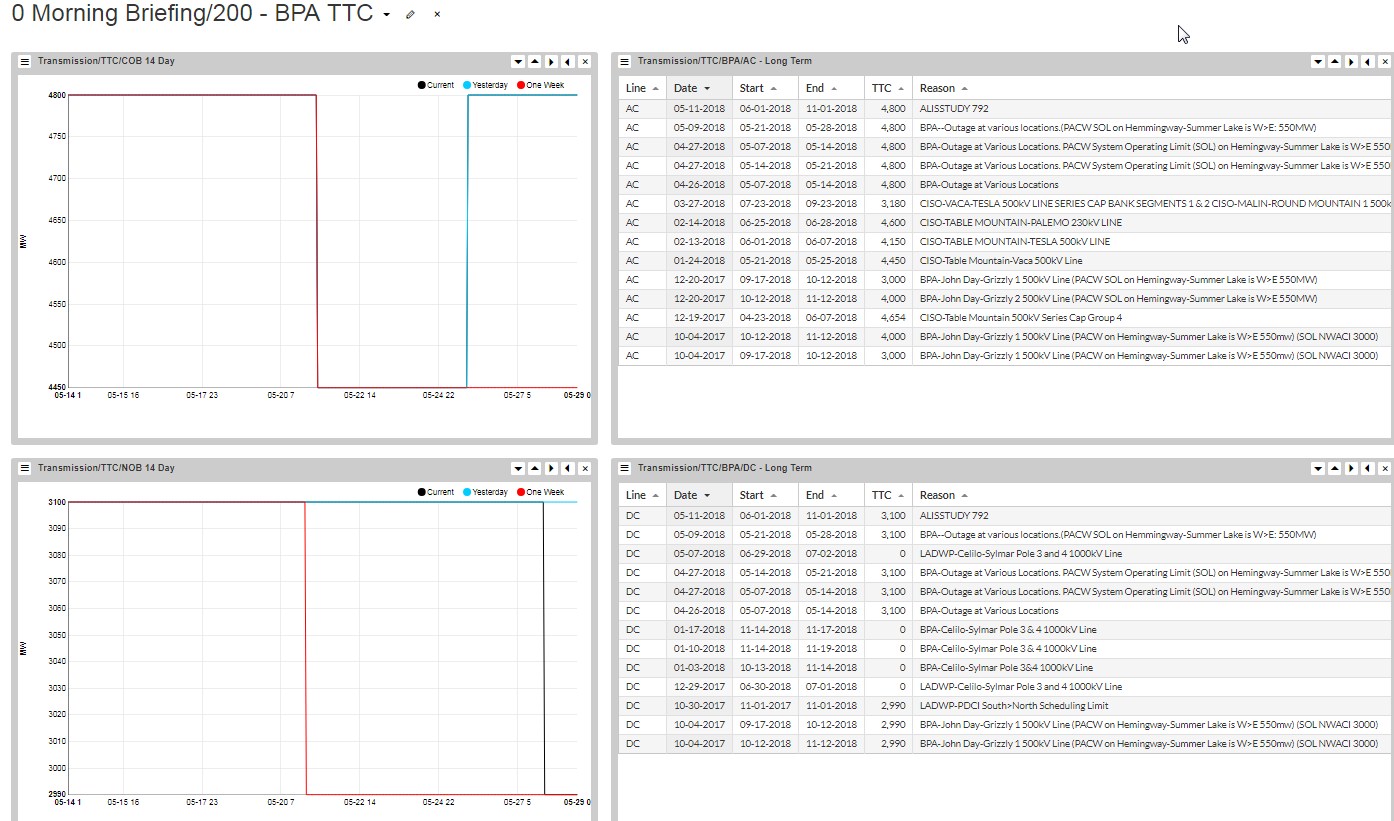 No change in TTC. 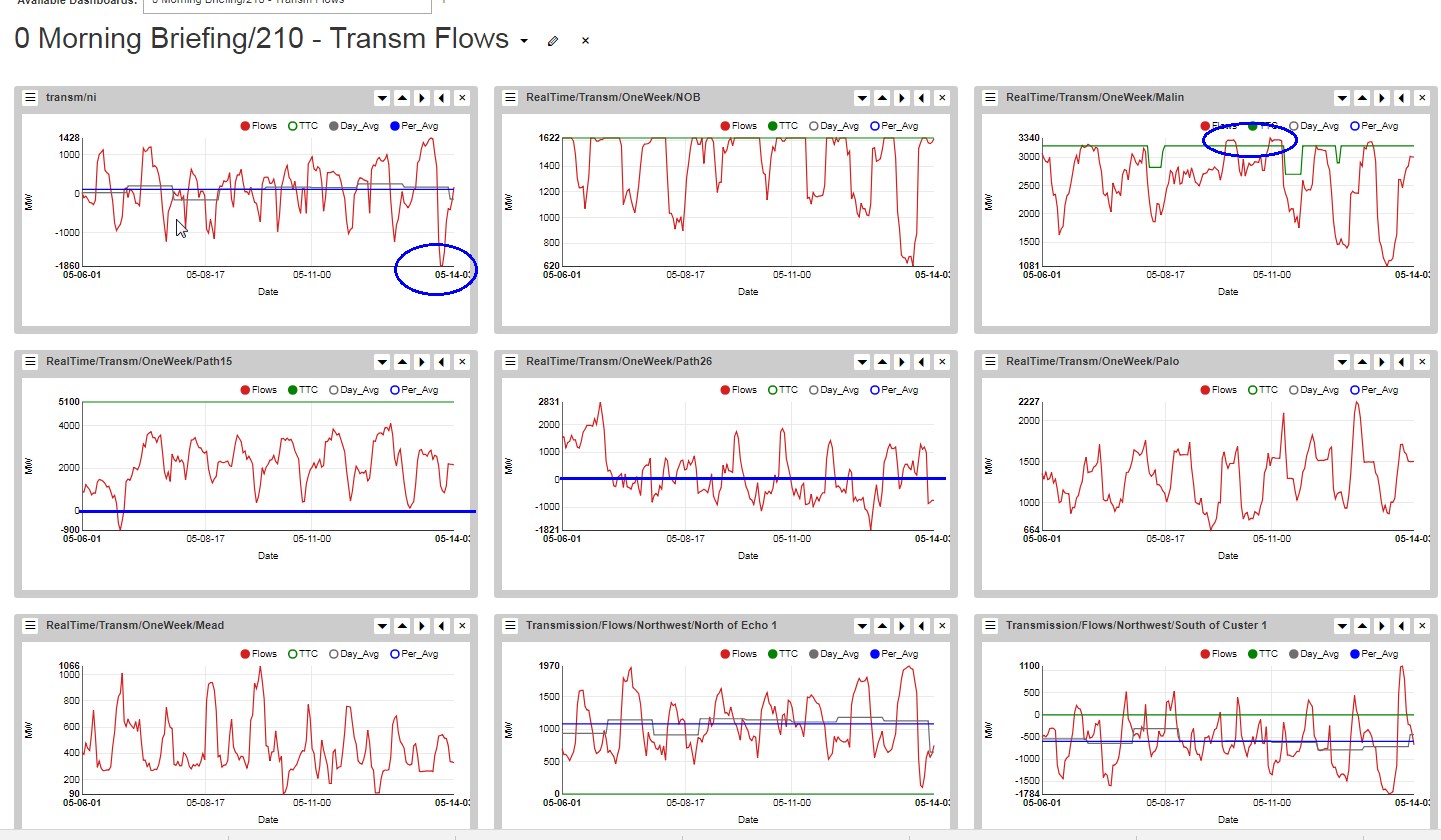 Bearish everywhere with ever so subtle hints of Northwest bullishness – emphasize the word subtle.