Our cash takeaway was on the weak side of things, let’s see where the term markets are trading. 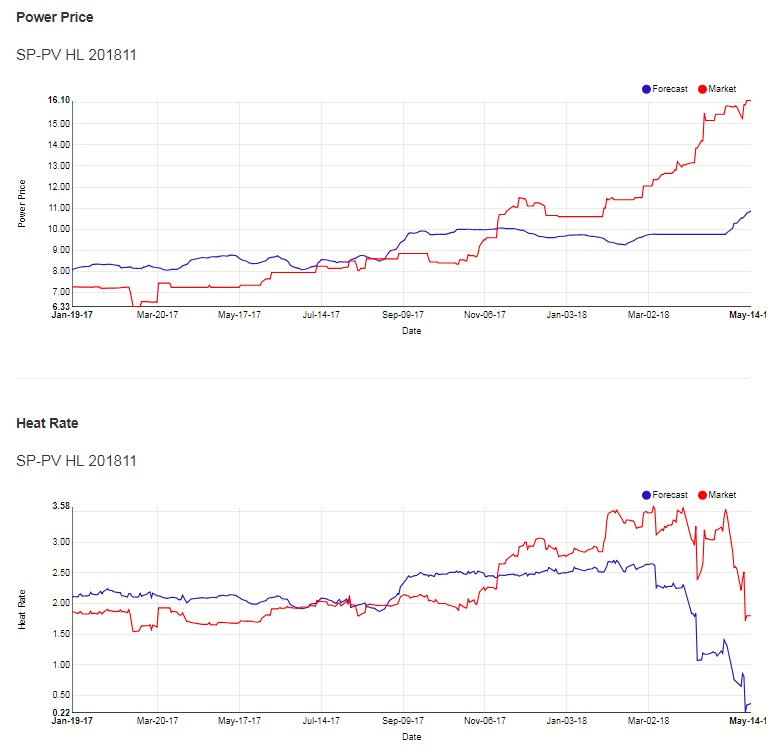 This is one of those Socal City Gate bullets; as the gas price rallies the heat rate tanks and the power price rallies faster than the heat rate falls. In theory, as long as there is one megawatt of gas online inside SP15, and that is the marginal unit, the price is right. But that isn’t the case with the Nov spread; the market assumes 1000s of MW online inside SP, though the forecast has pretty much displaced all the gas gen (because of the gas price spread) – note the forecast heat rate is almost zero. I’ll just say, if you really think the SP | Palo Nov is going to clear $16.00, I’d sell it to you. The most prominent risk, from the long side, is the socal premiums dissipate as reality sets in. 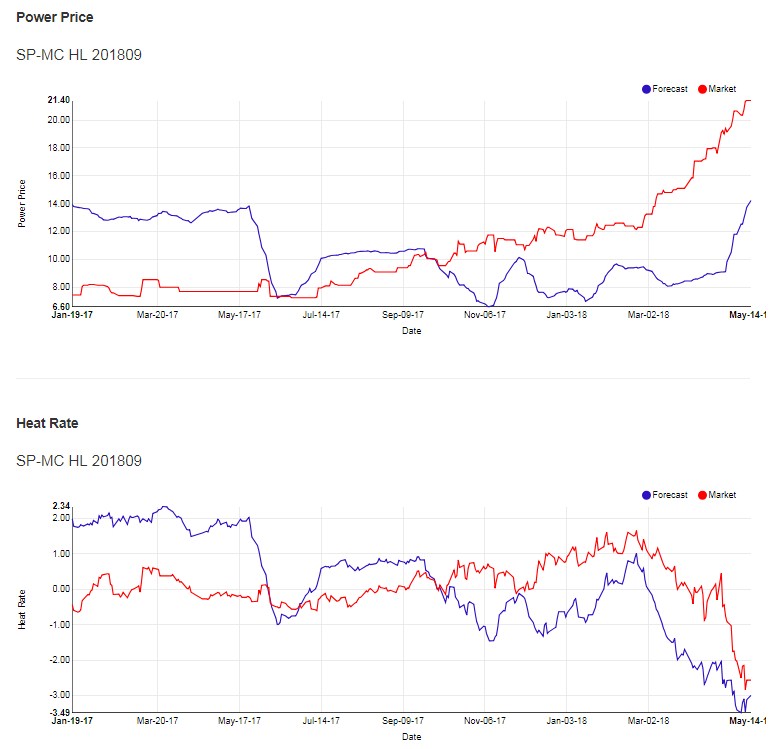 Similar background with the Sep SP|MC HL; price-wise is clearing at an all-time high; heat rate-wise, an all-time low. Both plots look odd, and we’d be tempted to short, but would like to see this find a top, first. 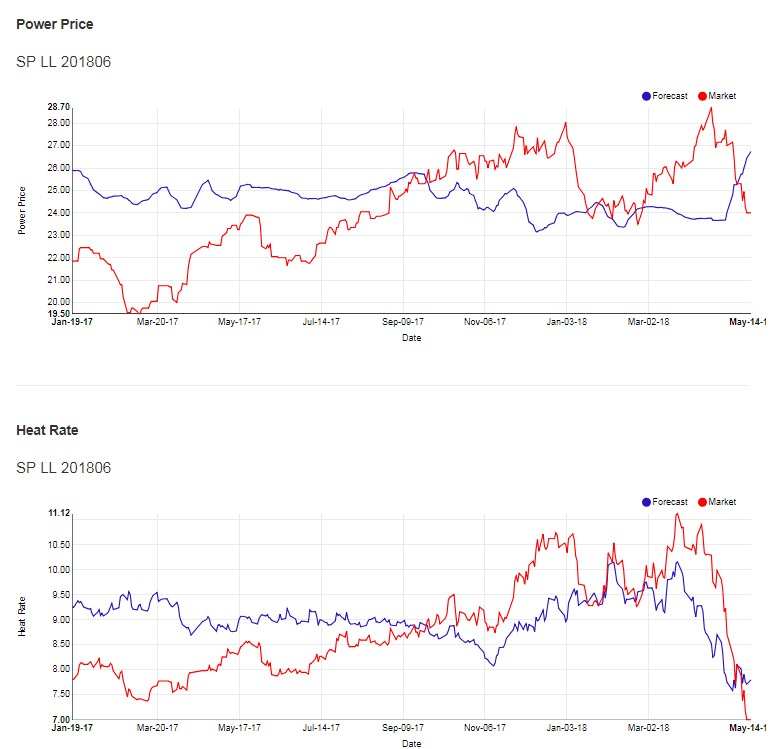 Here is one that both plots are somewhat parallel – because they are both SP.  Heat rate is at a contract low; price is at a 150 day low. We already saw BOM tank hard off of bearish weather and other deplorable fundies, makes sense to see June tumble to oblivion as well. We like cheap and would be thinking of buying SP at these levels – in fact, we will buy it and expect to see Burbank > 100 degrees in the next couple of weeks. 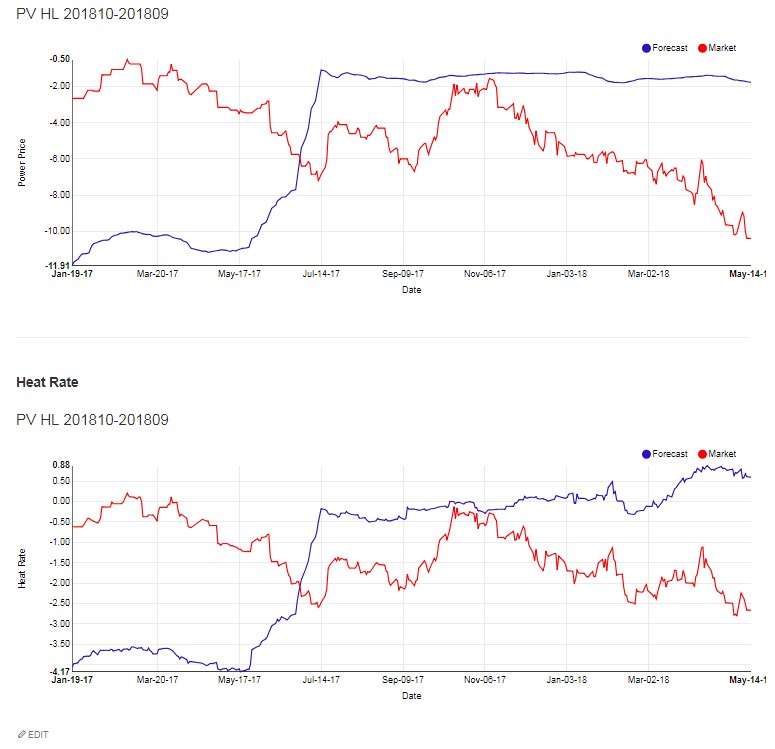 The market has long favored the Sep over the Oct, now it’s pricing it at $10 over, and it isn’t because of gas; the heat rate is parallel.  A torrid summer and this roll will crash further; a mild summer, and it will rally. Once we go to delivery, Sep 1, it most likely will rally since Phoenix will be amidst its monsoons and average temps are at least ten degrees cooler than July. 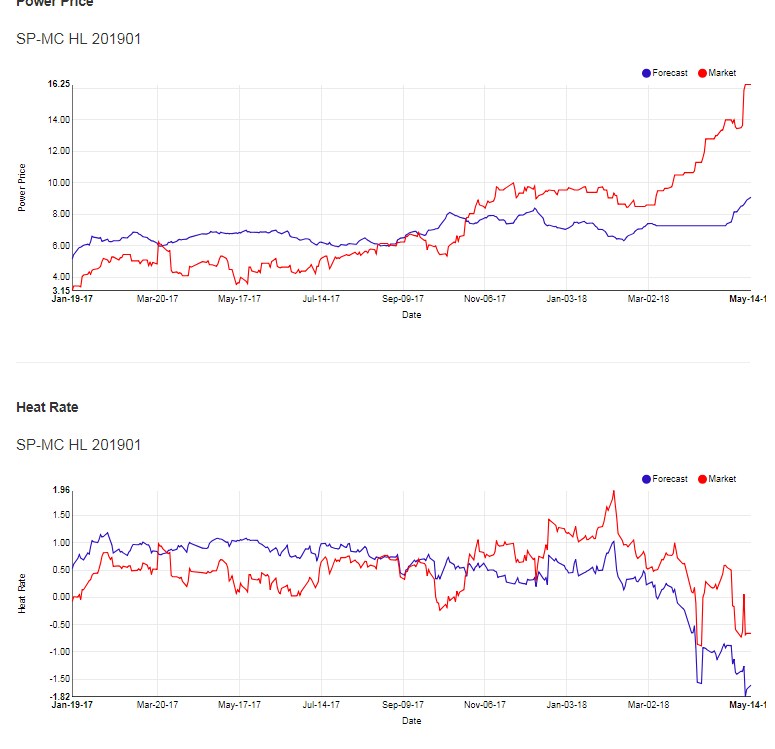 The heat rate hasn’t collapsed as much as the price has rallied. Given the Mid-C’s hot May, we see no water risks in September; this runoff will be “high and dry” by late June. We’re sellers. 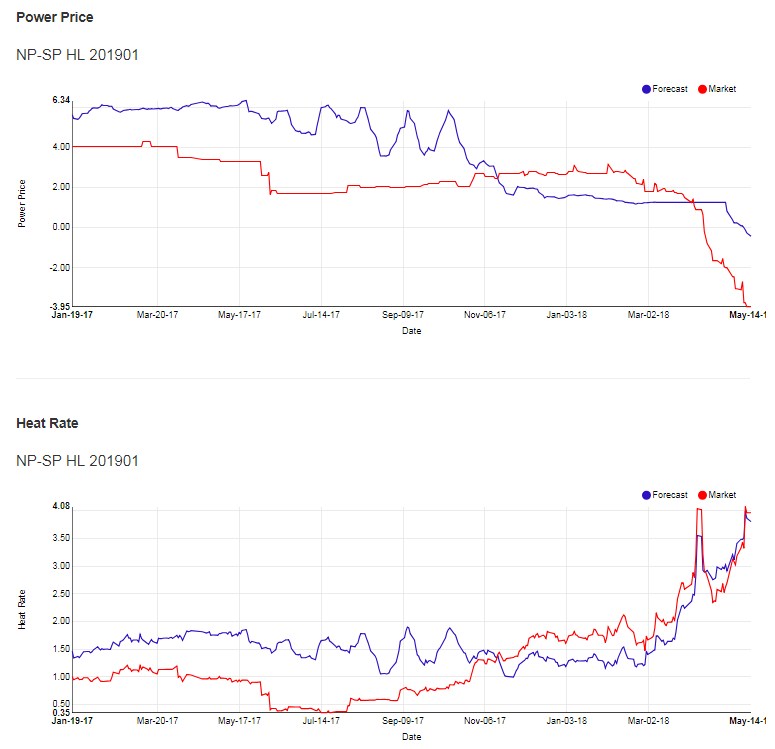 This is 100% gas; each metric is at an extreme. Price is at contract low, and not by a little; heat rate at a high. Pick your poison, any of these SP to Any Hub is the same trade. You either are guzzling the Citygate kool aide (cyanide-laden that it is) or you are laughing at the lemmings. Either way, pick your side and bet the farm. 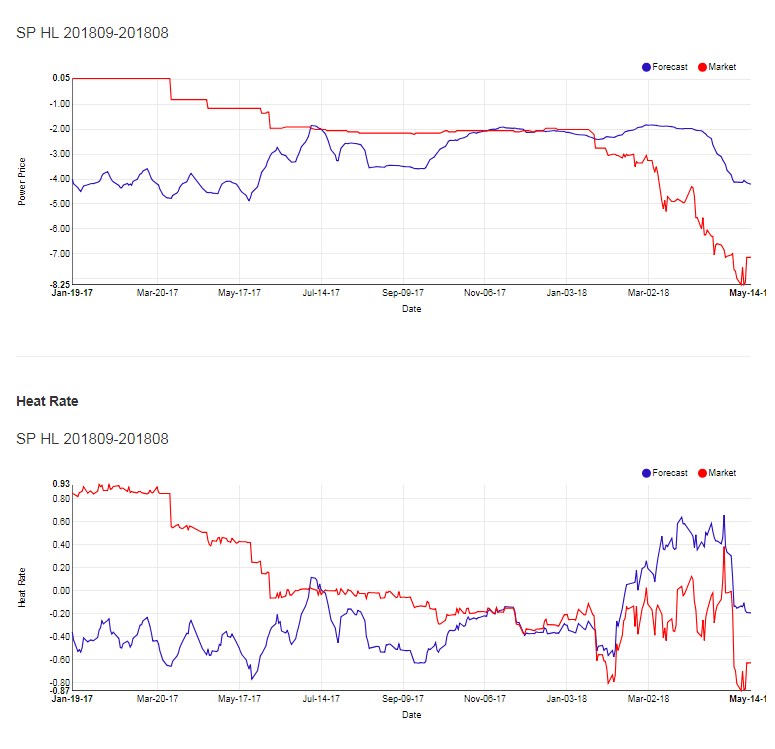 This one isn’t gas, its SP to SP (Sep to Aug) and both metrics are at contract lows. Why? Does someone have the ultra-weather forecast and can see Auggy clearing 100 degrees in Burbank every day, while Sep struggles to breach 80? No, that forecast doesn’t exist, so why the disdain for Sep over Aug? We know why – there is no reason why. Fade this foolish move. 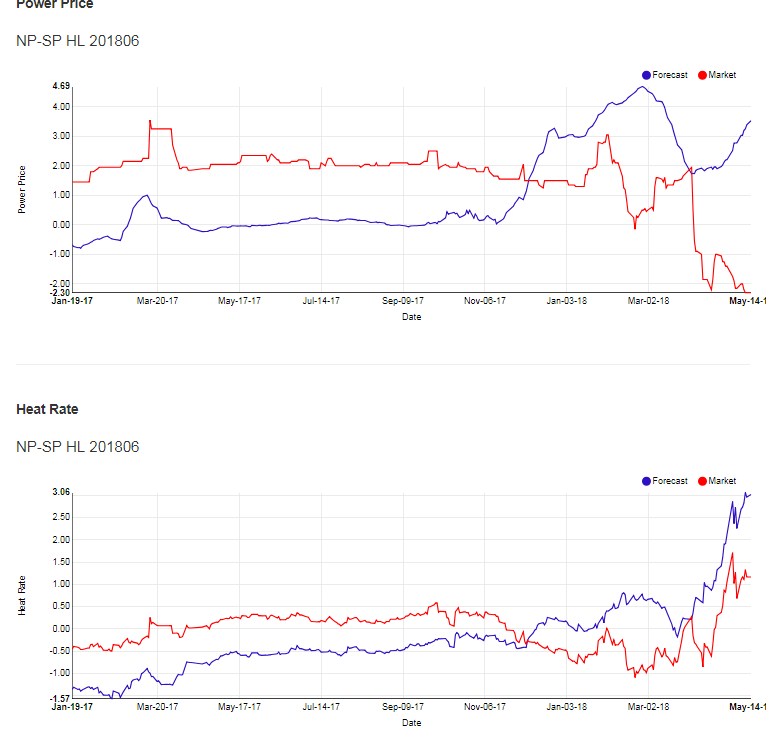 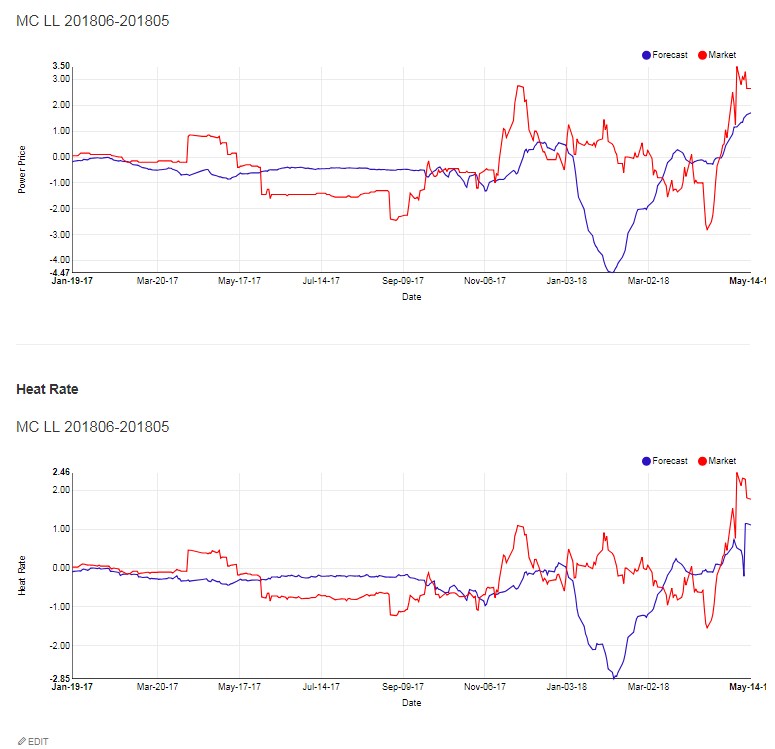 Ahh, here we go, a fundy only move. The market now hates BOM (as it should) and loves June (as it perhaps shouldn’t). We don’t see any basins at zero (SWE), and the MidC is cooling down. That means runoff slows and shifts water into June. In other words, your BOM LL pain will most likely be your Prompt reality, at least for a couple of weeks. 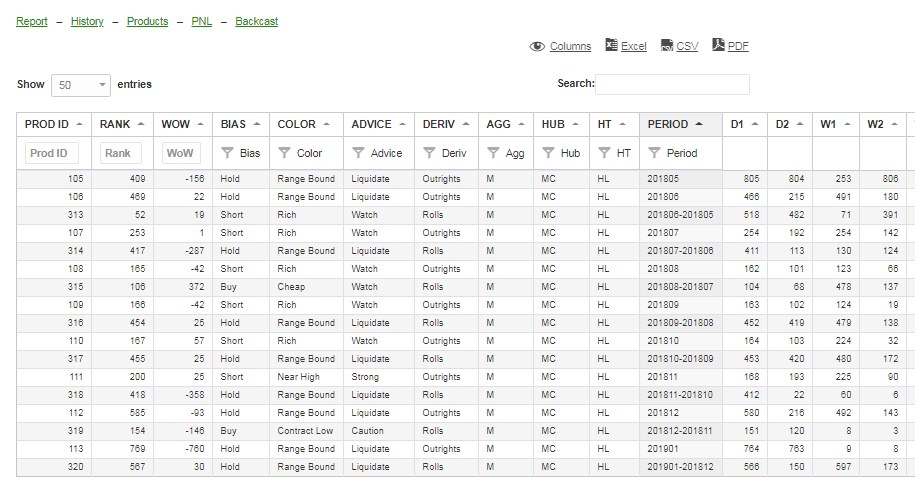 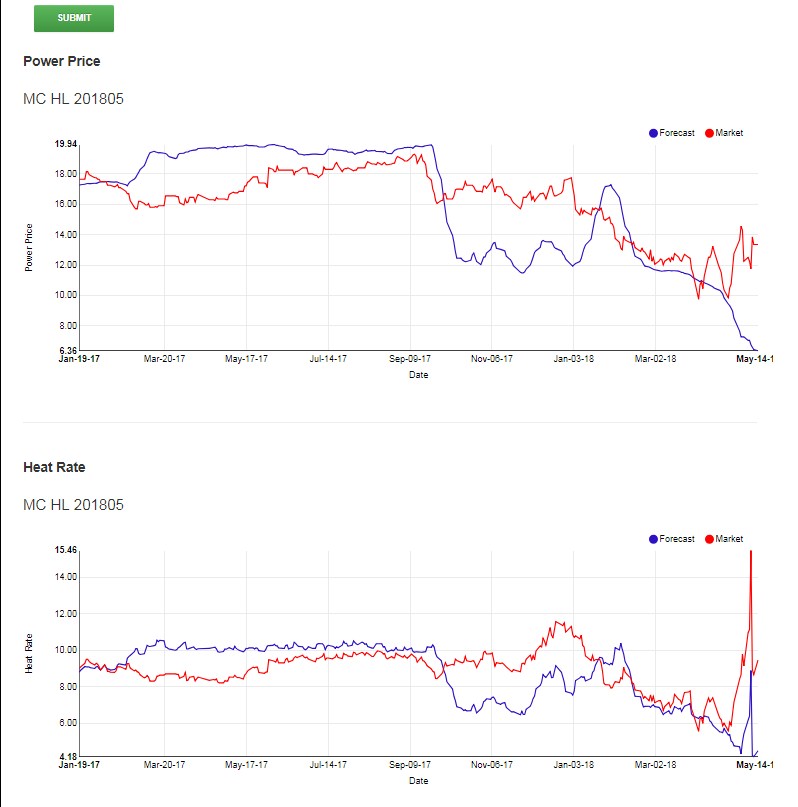 BPA is doing an admirable job manipulating the market. Trump would be so proud if he only knew the machinations employed to keep gas on the margin. Things like spilling 100kcfs at Coulee, 350 kcfs on the lower Columbia … and it is working. If anything, it should get easier to manipulate as flows slowly back down. 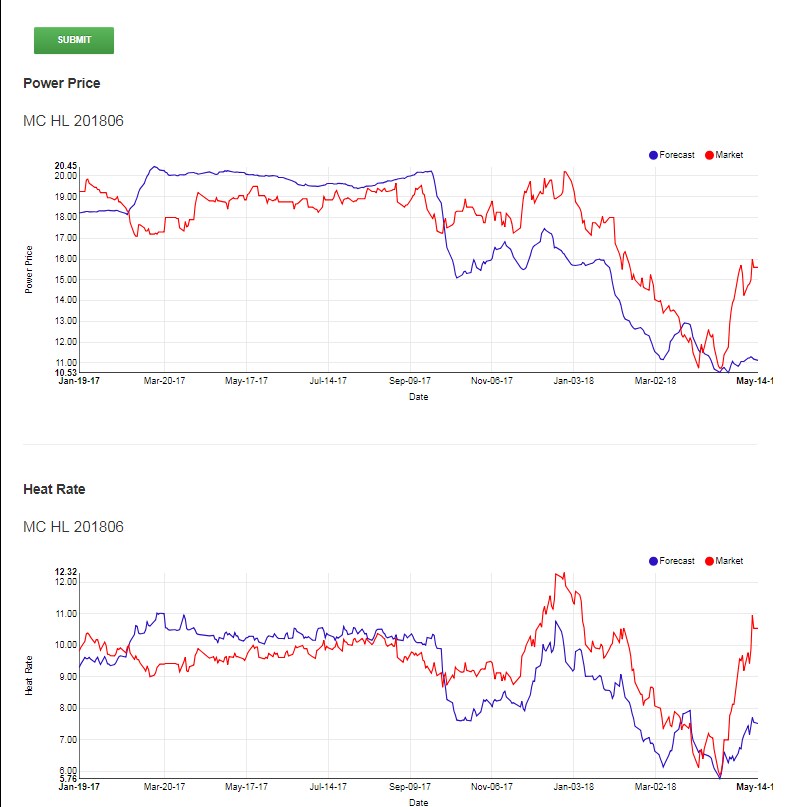 We’d exercise a word of caution about June. Bear in mind, the May heat is over, the rest of the month looks like average to below average temperatures, all of which shoves melt into June.  11k heat rate in this water year – yours. 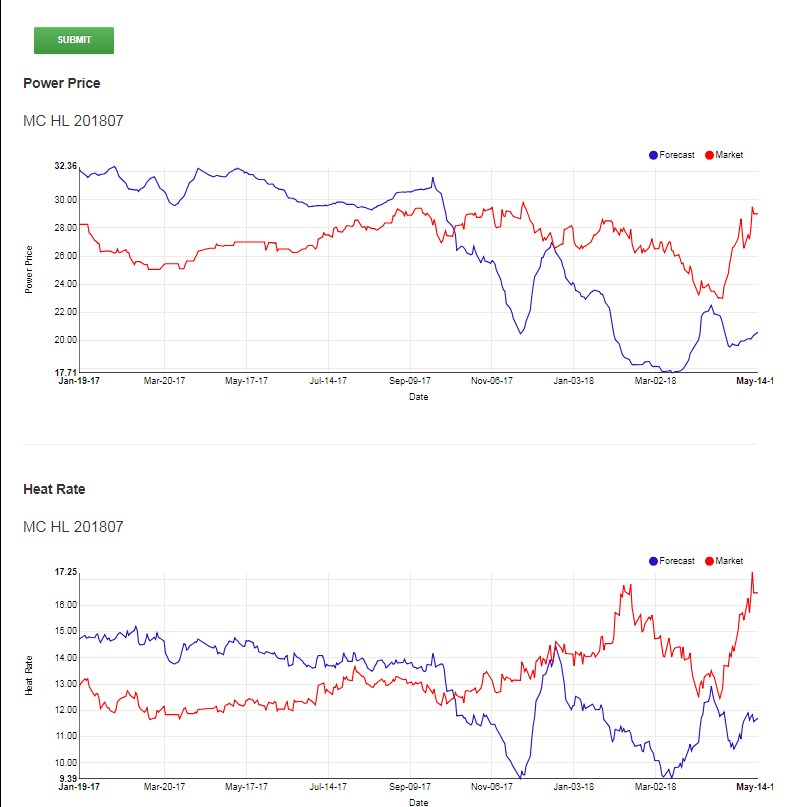 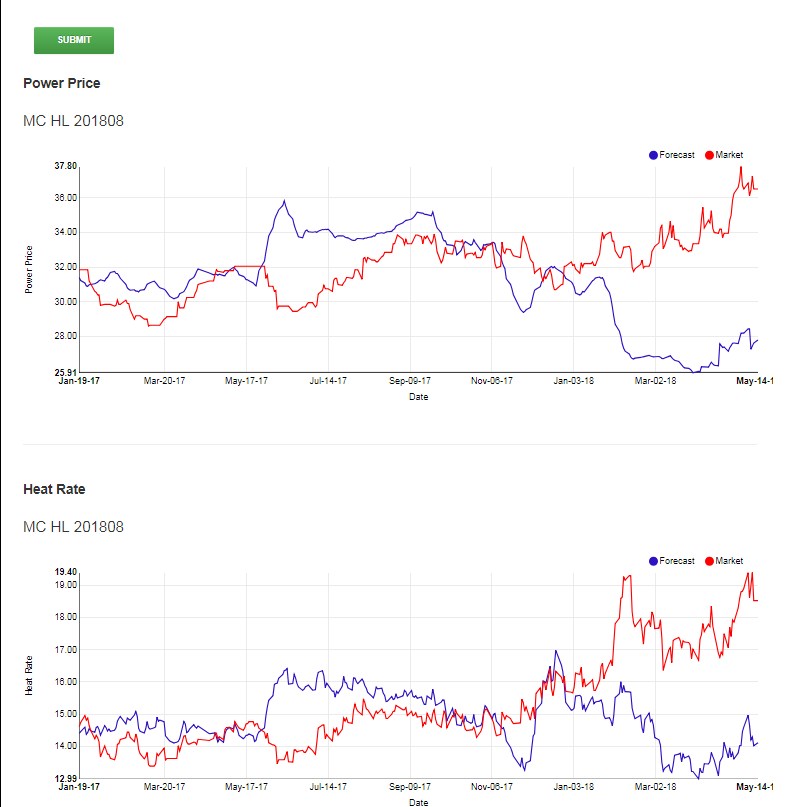 Aug is faltering, finding resistance at 19k heat rate – I should hope so, there are no units at 19k. 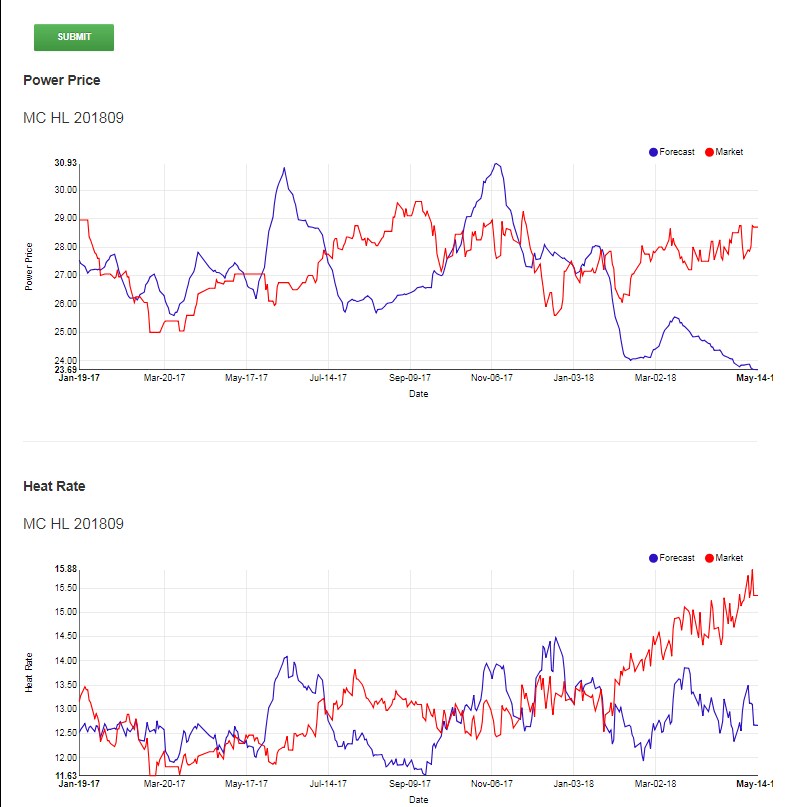 Sep is over-priced too, but I’d pick on July and Aug before wasting VAR so far out.