Exciting times; the Northwest is approaching its peak runoff; perhaps it crests next week if not then, the following week. Palo just came out of some baking hot days, now its poised to cool way down, just when the nuke returns. The ISO is nowhere and has nothing to look forward to. Let’s look at BOM: 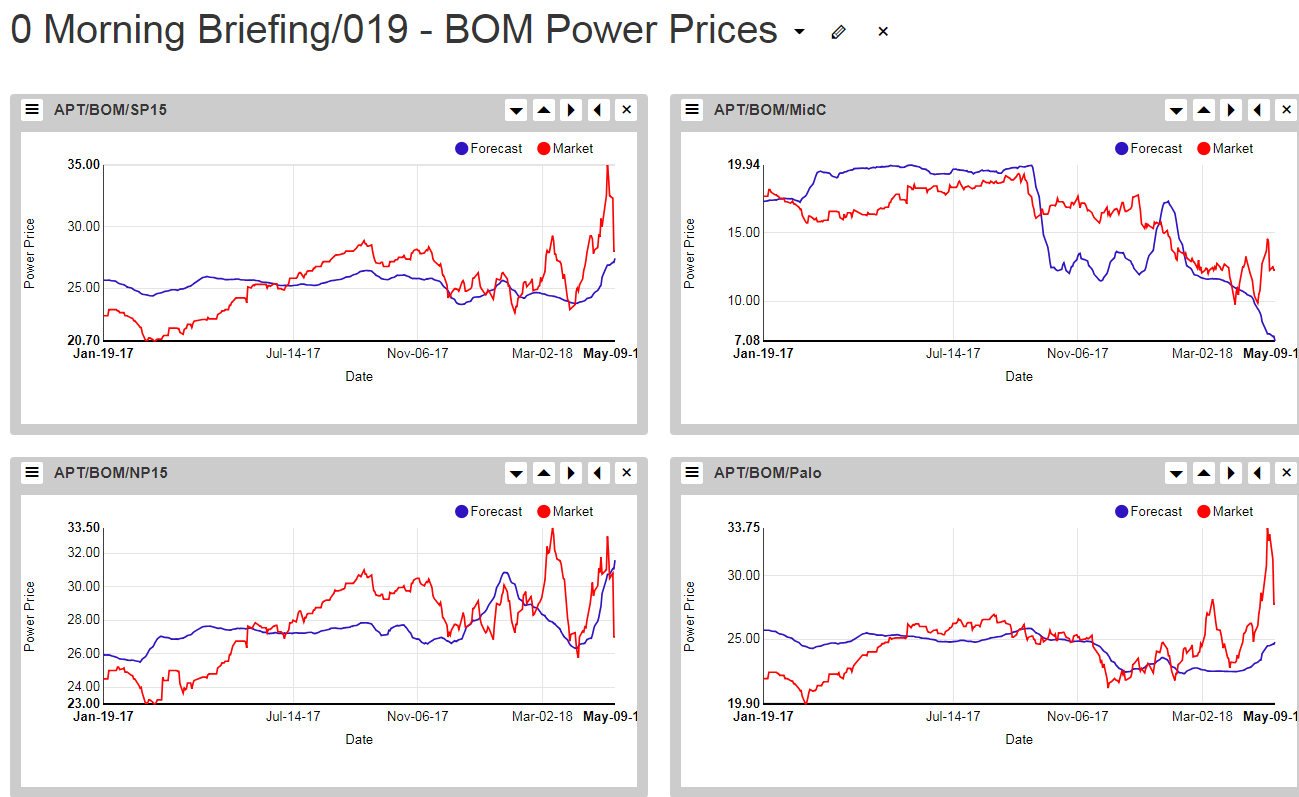 All WECC hubs watched the recent gains tumble to the wayside. So much for “paradigm shifts”;  seems the market got a bit ahead of itself and bid things up to unsustainable levels, then looked around  (at fundies) and said “oh poop”; then puked. Given the weaker weather outlook and the Northwest’s over-supply, I’d suggest these BOM markets will fall further today. 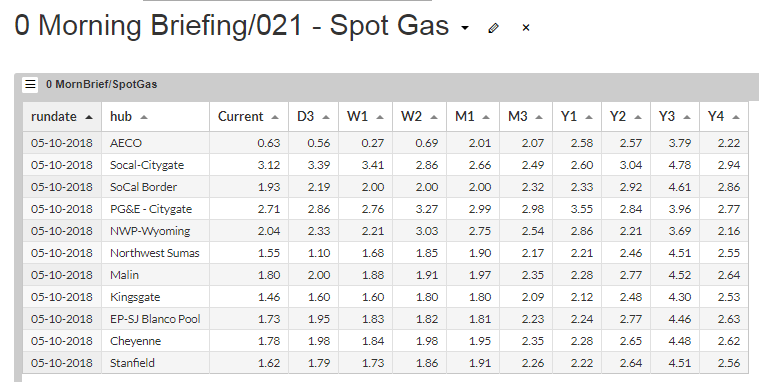 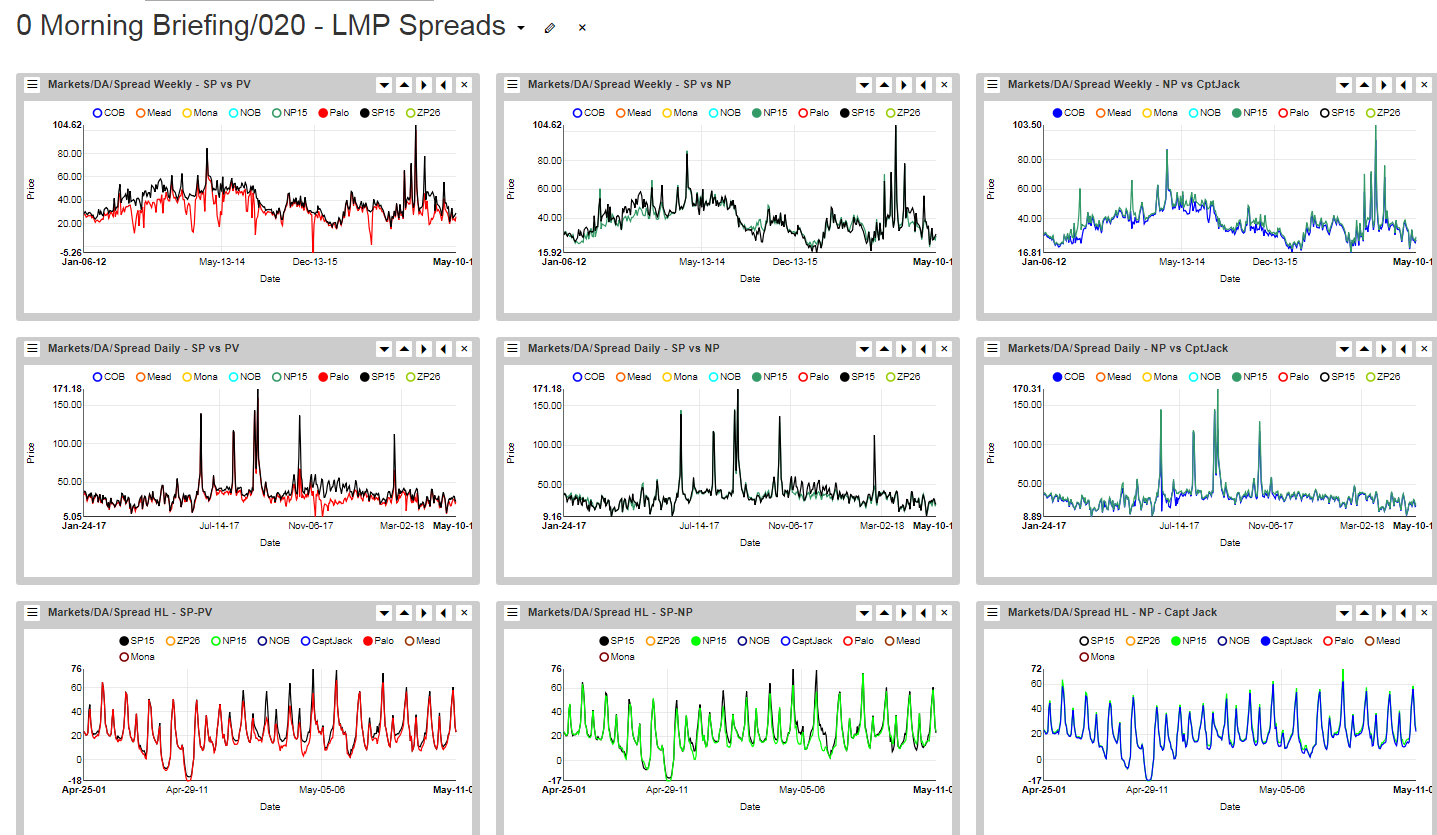 Not much to say here, LMPs are sideways. 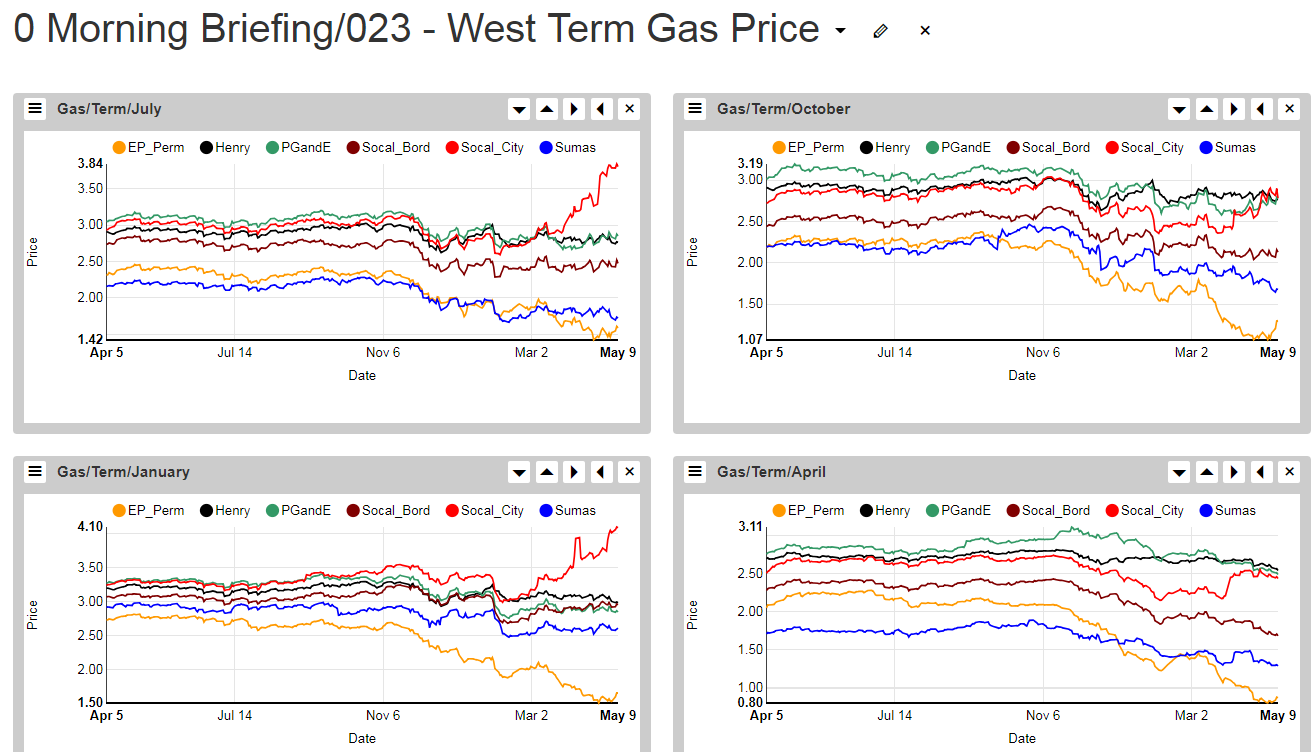 SCG keeps rallying, but check out the bump at El Paso in October – all the other hubs came off, but EP rallied. 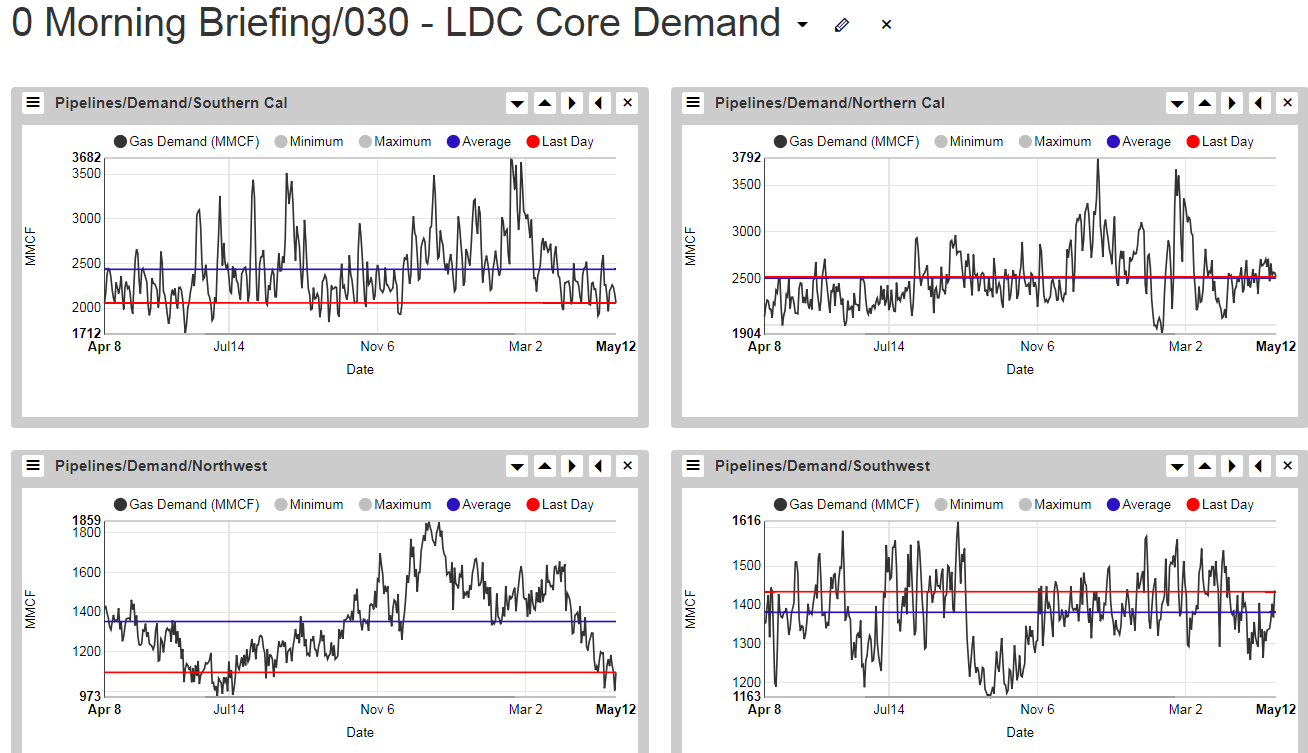 The Ansergy LDC Indexes continue to tank, except at PV where the heat rallied demand (power plant). 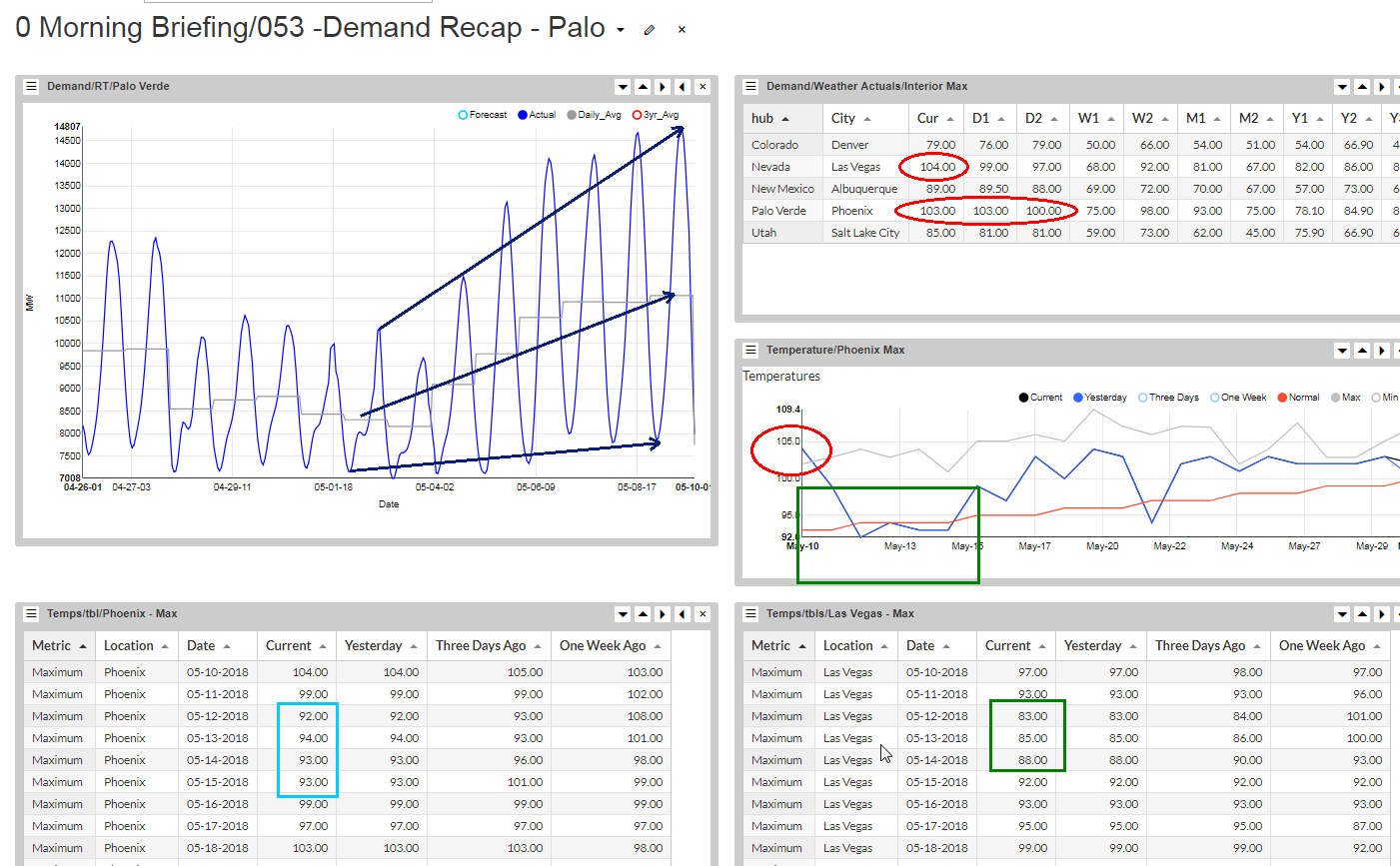 Palo’s loads soared off of 100+ days in Phoenix, but the rest of the WECC was bearish and dampened any chance of a price rally. Looking ahead, Phoenix plunges 10-20 degrees and stays cool through most of next week. Party over. 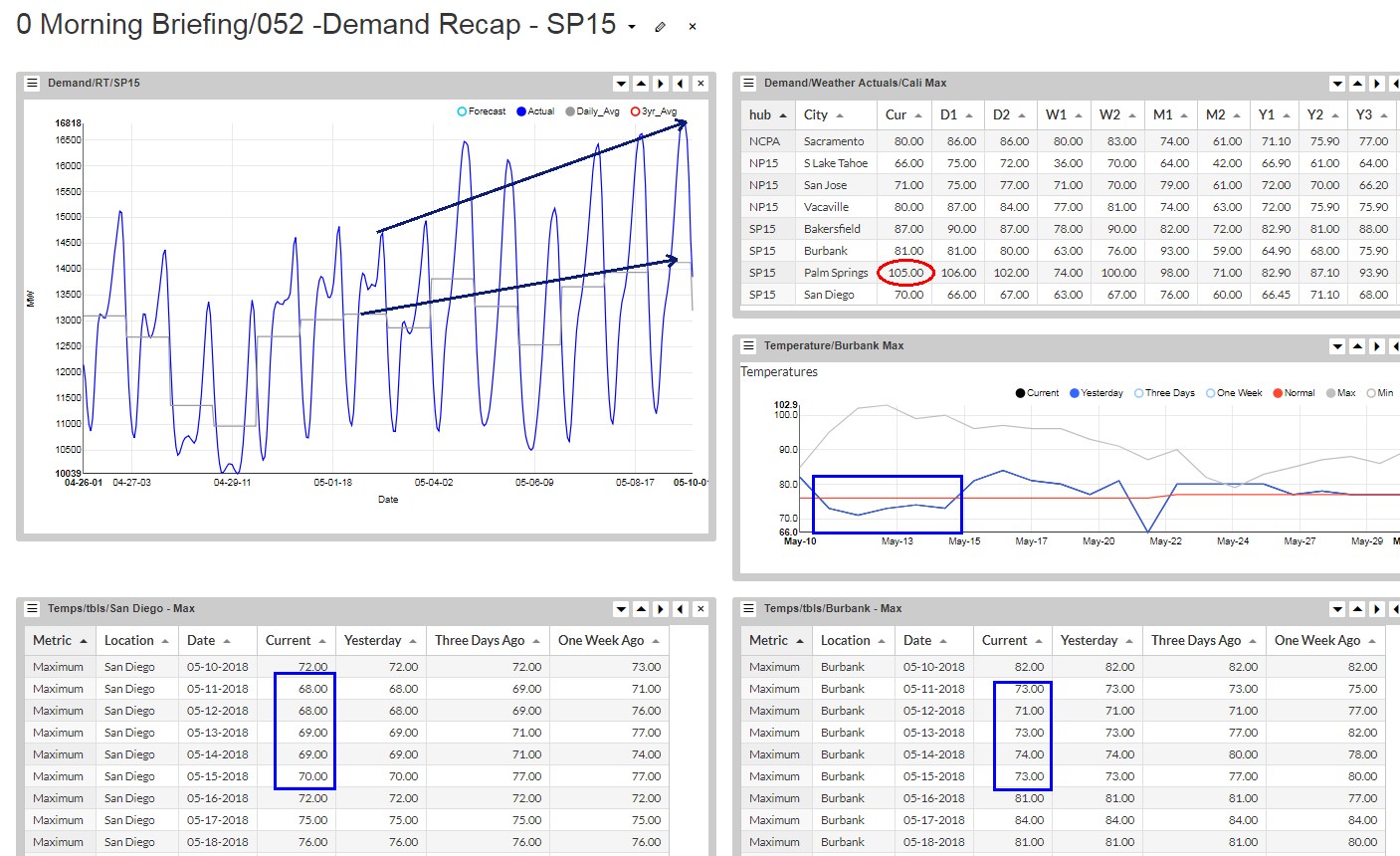 SP’s loads popped, more off of heat in the desert; Palm Springs busted 100, again. Looking ahead, more cool weather, a string of nearly a week below average is heading towards Burbank. 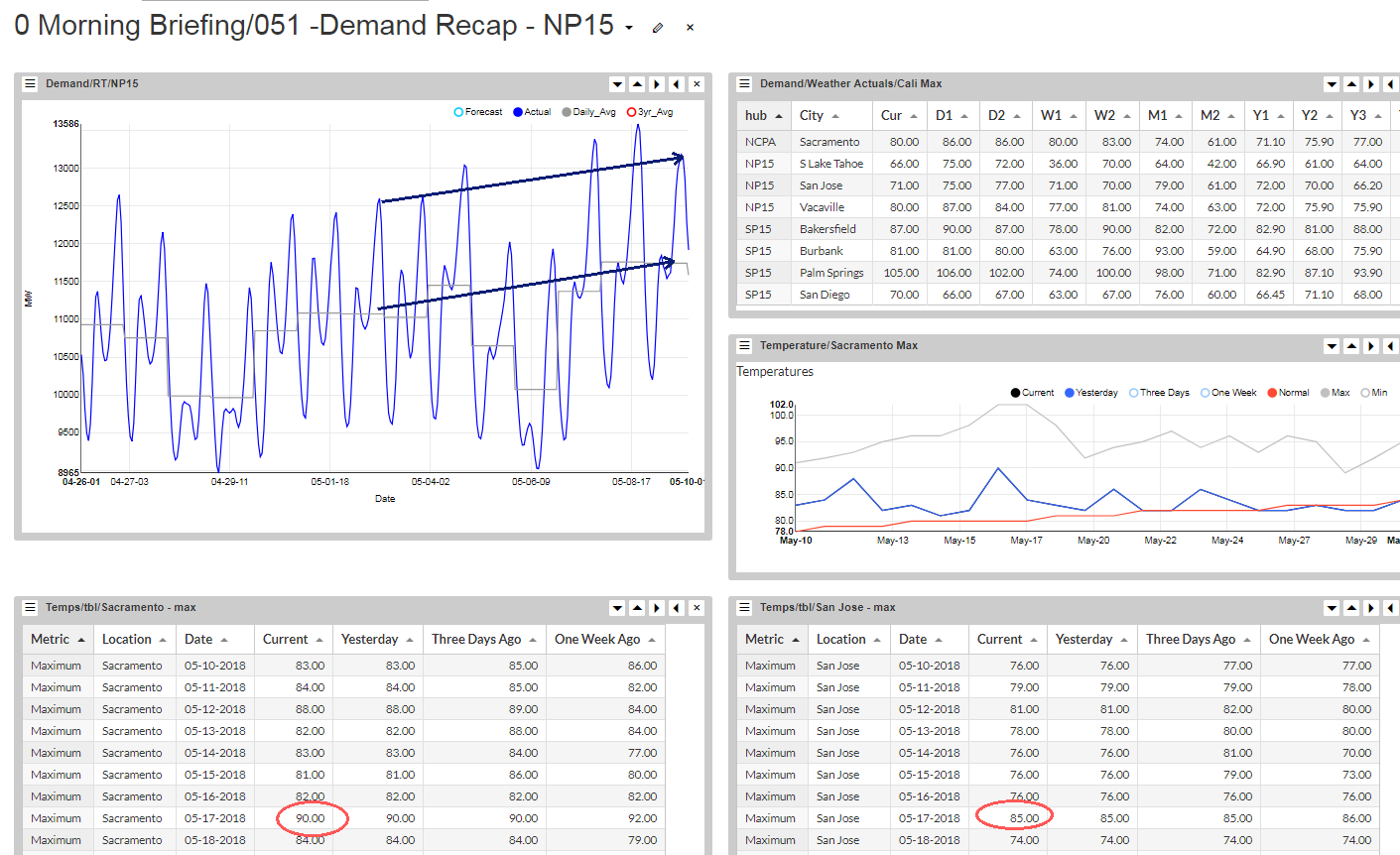 NP’s loads also rallied, not as much as SP’s. Temperatures don’t cool as rapidly in Nocal as they do in Socal and we don’t expect to see as much load decay. 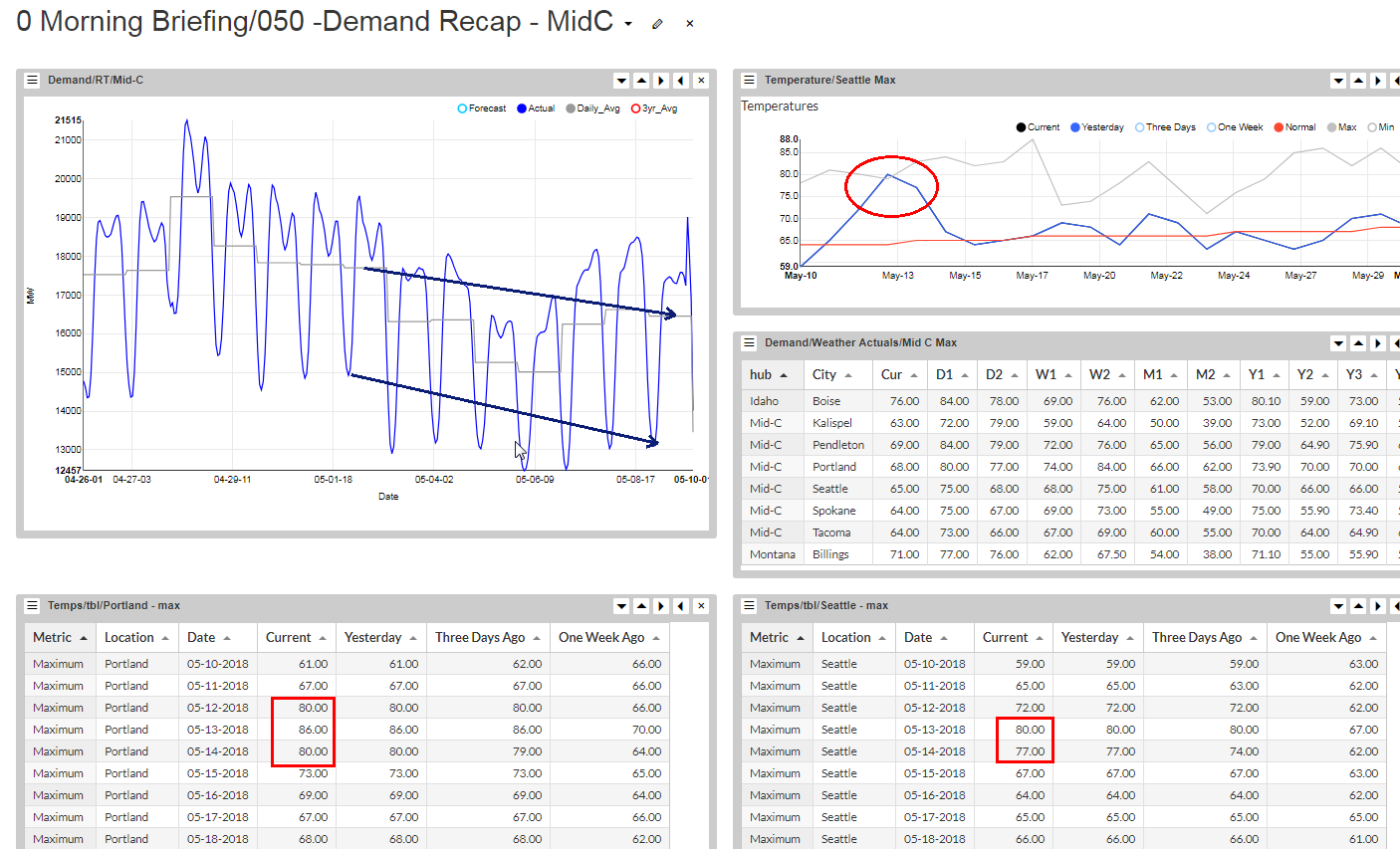 Everything in MidC is in a death spiral – loads and supply. Watch out for loads, though; there is some substantial heat heading towards Portland; a string of days in the mid-80s. This week may very well mark the low, demand-wise, for the year. But alas,  that heat will drive more melt raising river levels yet higher – more on that in the hydro section. 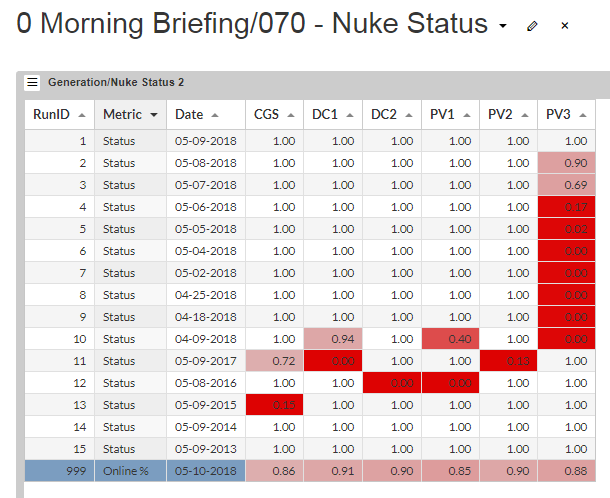 The Palo unit is back, and there will be no more refuels this season, though we wouldn’t be surprised to see BPA back CGS down for economics in the next week or so. 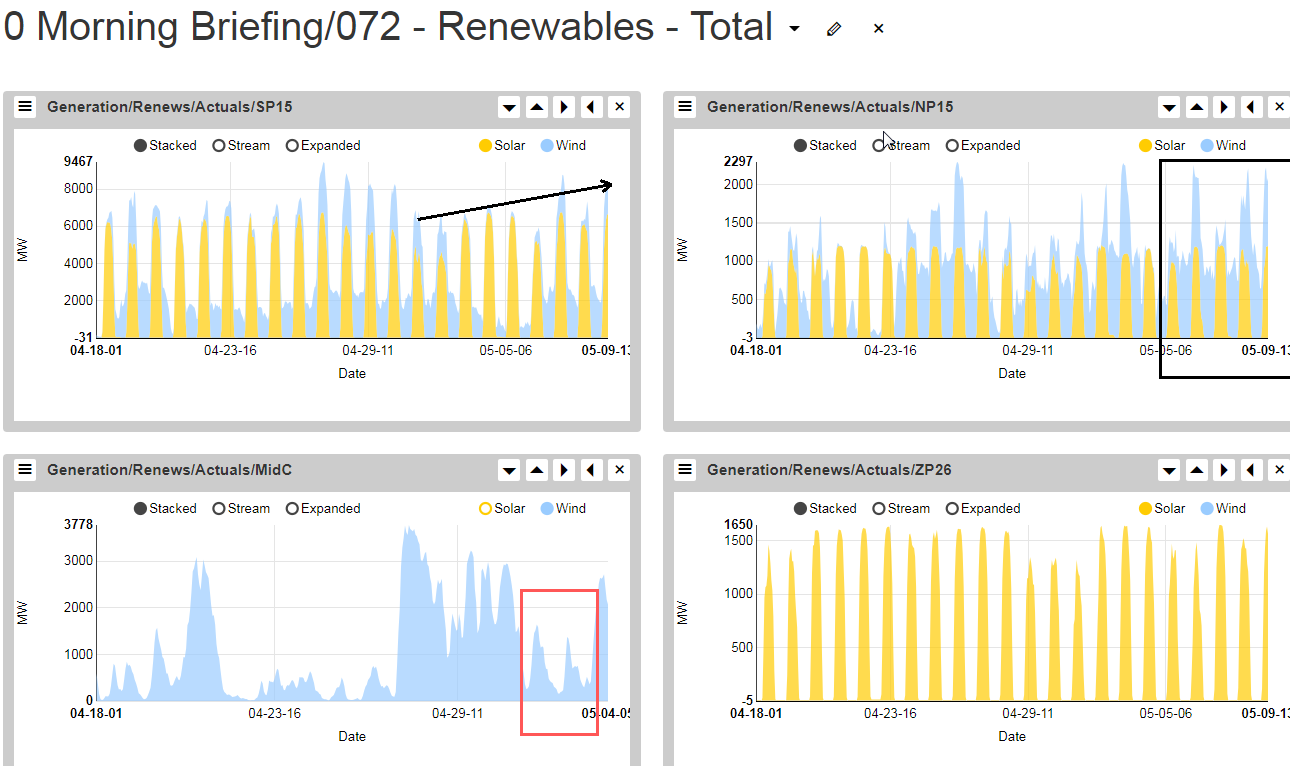 ISO renewables were robust yesterday, not so much at Mid-C. 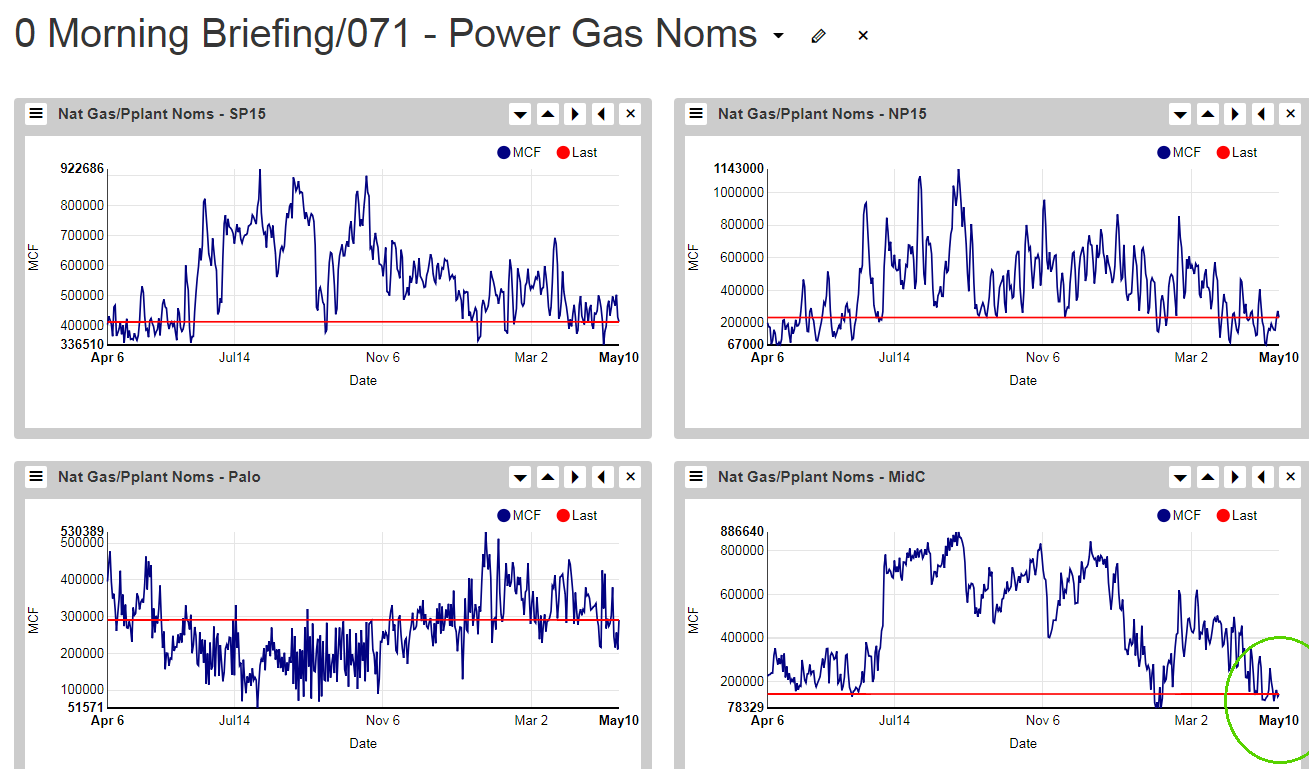 Noms are weak, why wouldn’t they be. Let’s look closer at Mid-C: 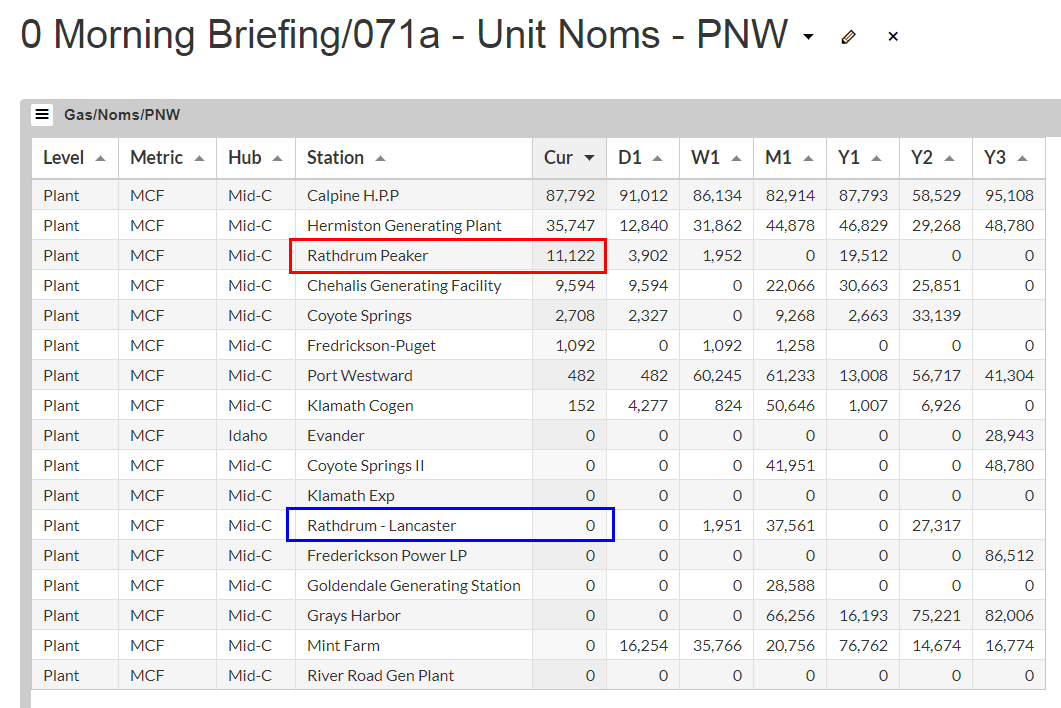 OK, here is something odd. Avista turns on its Peaker but won’t run the combined cycle. Must be some voltage issues in the Rathdrum Prarie; I recall from my days working there that during peak spring runoff they struggle to move energy across their ute.

The other point is how much more hydro do you need to knock off the rest of the gas units? I’d say infinity – some of these units will run even if the price is negative (Calpine HPP).

Let’s get California out of the way because we’re going to be a bit long-winded when it comes to the Mid-C’s hydro situation. 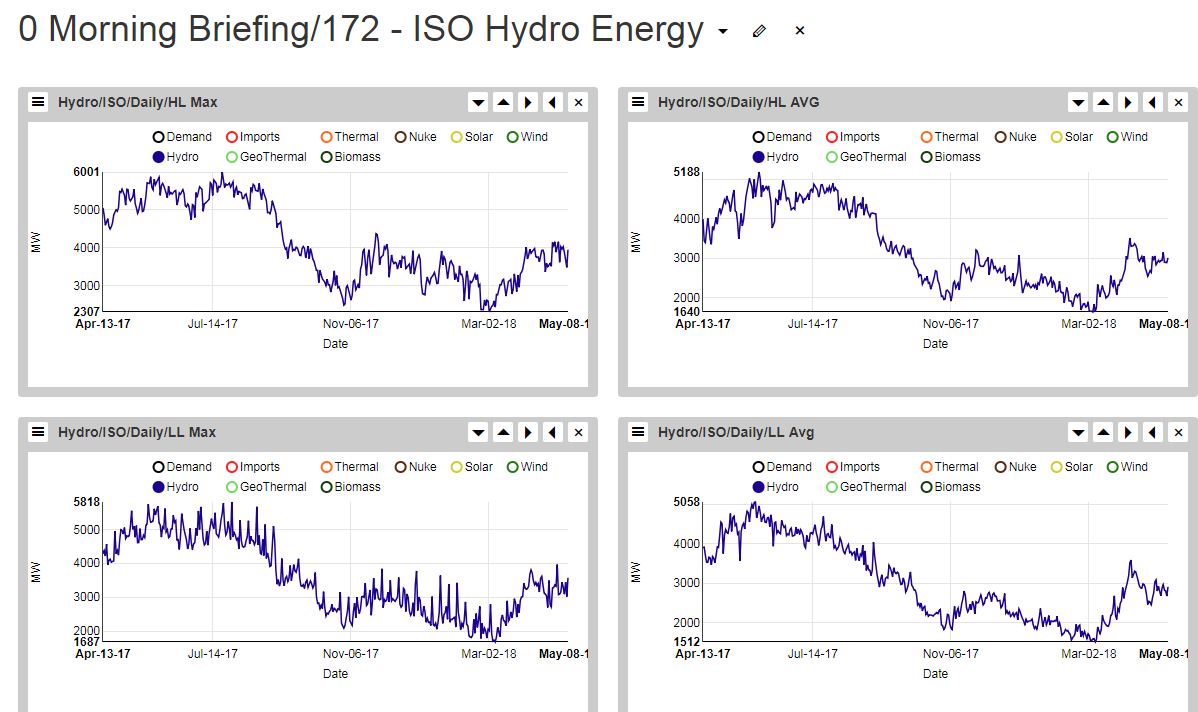 Despite the mid-70s at  Lake Tahoe, we are not seeing any surge in ISO hydro energy. Let’s look at snow: 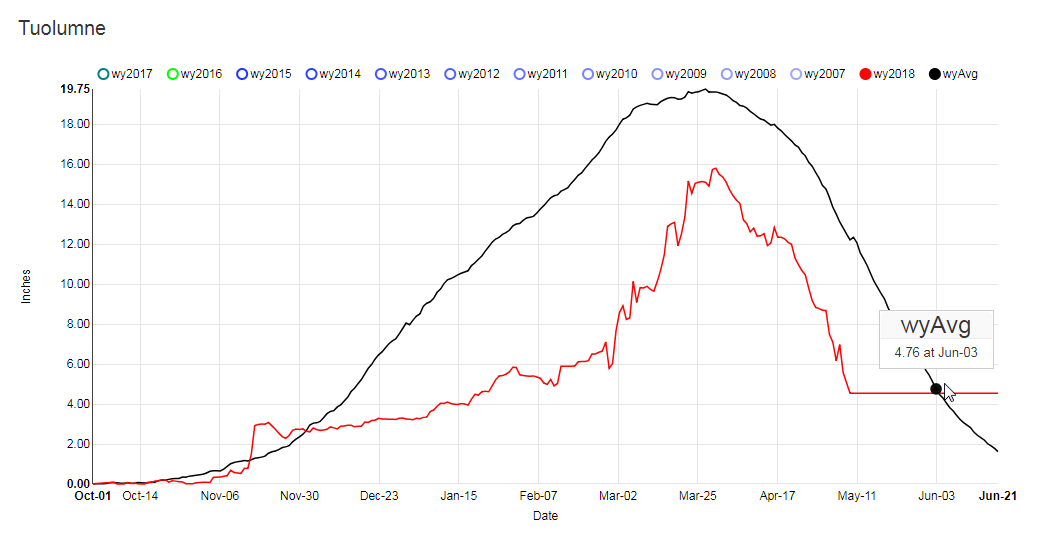 Take the Tuolumne as a case in point – snow levels today are where they usually are on June 4th; with just 5″ of SWE, don’t bank on a massive surge. The Pit River is even worse off: 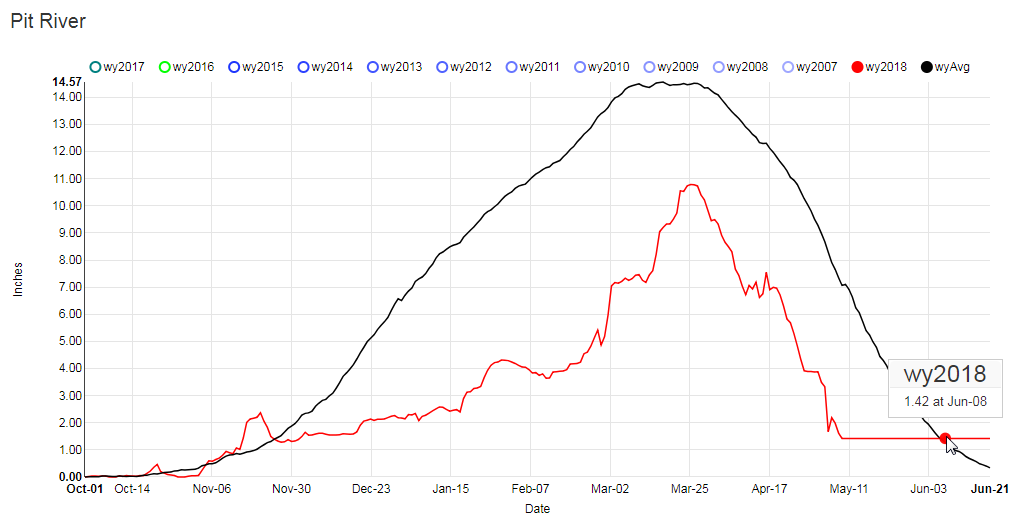 Snow levels are 29 days ahead of normal, and there is just 1.4″ of SWE left. No, there will be no significant hydro energy rallies inside the ISO in WY18; party over. 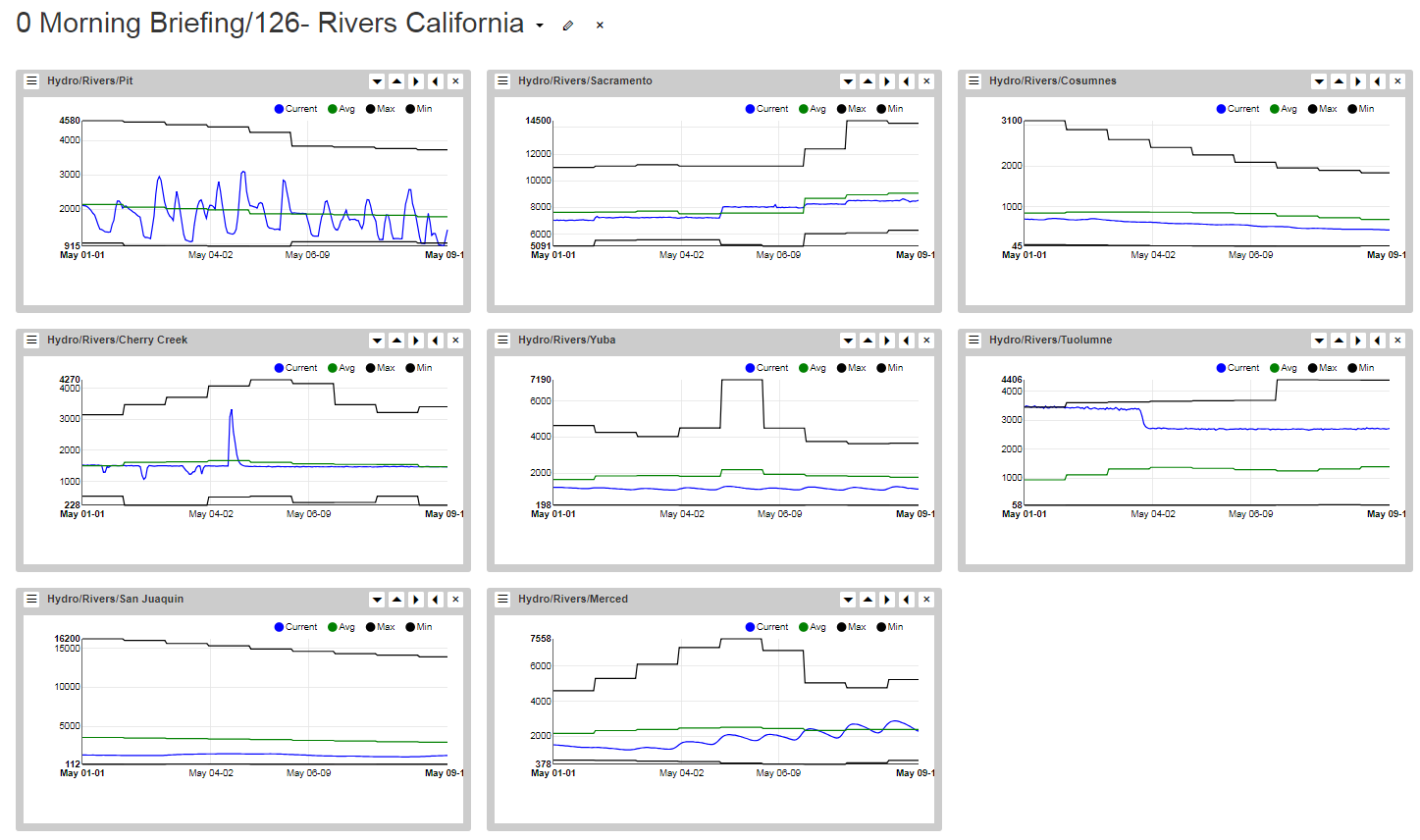 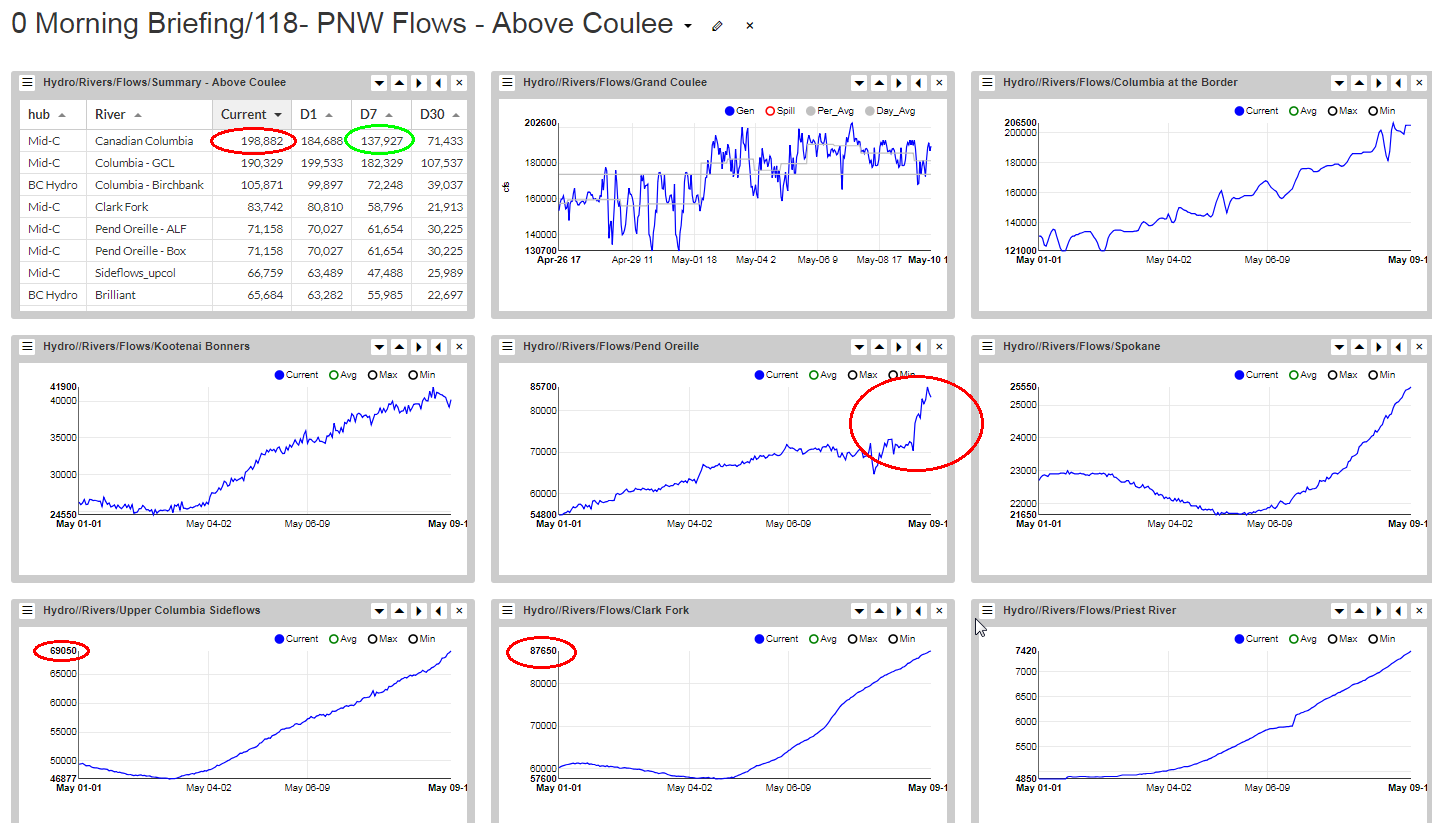 Every station above Coulee is soaring, check out the flows on the Pend Oreille. Everything is rallying, and more warm weather is enroute:

Another warm weekend and the surges will continue, they probably won’t even stop. The only saving grace for the PNW are the empty reservoirs:

The US Northwest has a fast refill taking place, but BC’s projects haven’t even started. This storage capacity may be the seed for some Mid-C surprises in June. After all, BPA did not start refilling Coulee until a few days ago. That bullish June-July scenario says most of the snow gets knocked off the hills in May, but not captured in the reservoirs. Mid-June rolls around, and inflows are collapsing yet ponds aren’t full. It’s a stretch, but now has a higher chance of becoming a reality than it did two weeks ago. 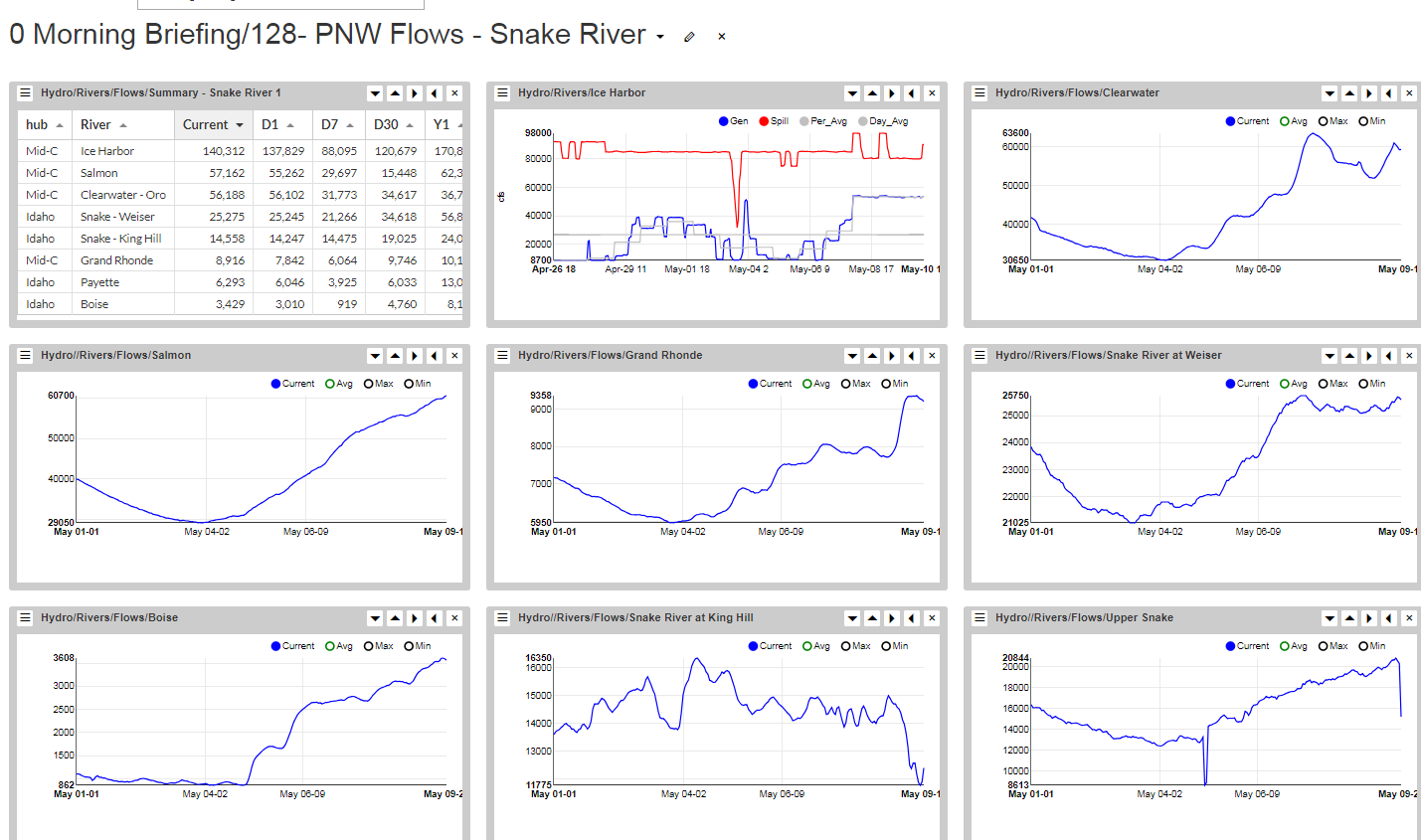 The Snake and Columbia above Coulee are a study in contrasts. The Snake, aside from the Clearwater and Salmon are barely moving. 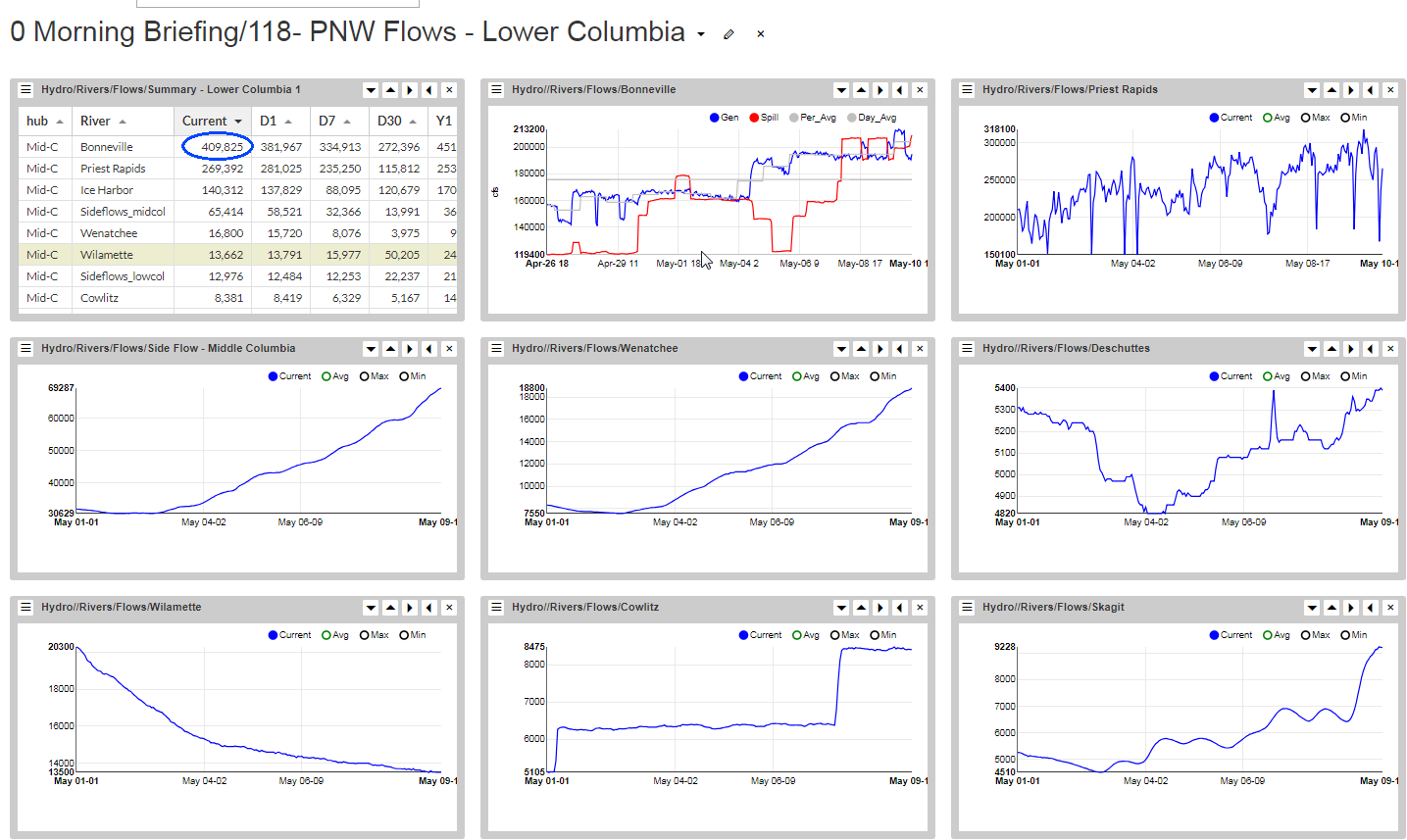 Those Mid-Columbia Side Flows are approaching records.

That is a weekly average looking back seven years, but look at the daily index:

Blow-out top as the index just surged 10kcfs and set a 20 year high. Of course, all of this water is just getting spilled but does put a lot of pressure on everything downstream of Coulee.

How long can these rallies last? Answer that by looking at snow. 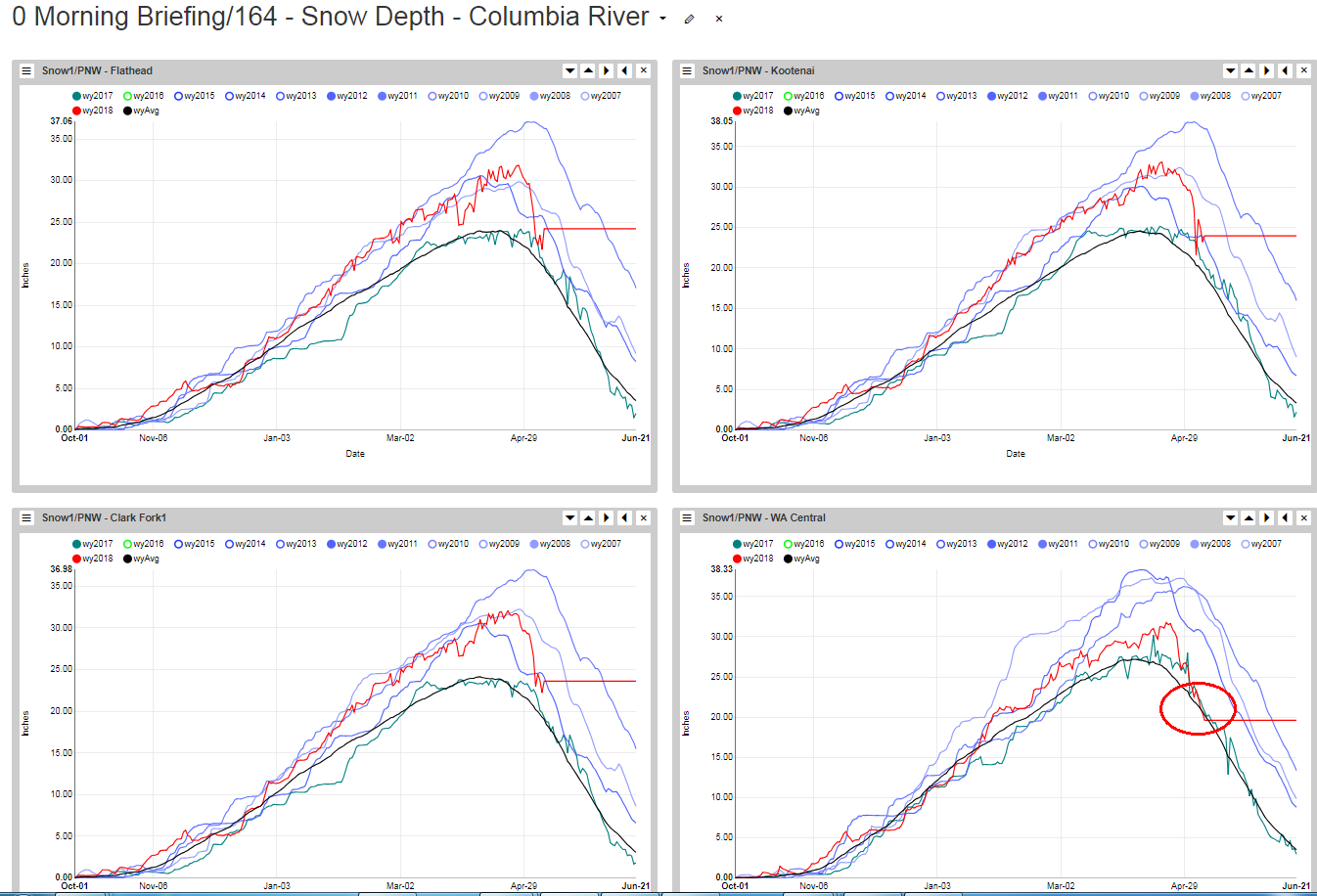 THree of the four indexes are above average, each about two weeks behind normal levels, all of which suggests this freshet party is not over. That heat next week will trigger rapid melts and probably put everything above Coulee at normal, maybe even below, but the damage will be done. Clark Fork at 100 kcfs? GCL inflows at 300 kcfs? Doubt that, but 250 kcfs is possible.

Interesting, net discharge at GCL came off, all the while inflows surged. I guess when you add four feet to storage in a day or two that will do it. By the way, we added the Spill Chart to our GCL dashboard as we have a feeling we’ll need it in the next few weeks. If you ever wanted to visit Coulee, now would be a great time to watch the laser show at night while the spill gates disgorge 50k-100kcfs. 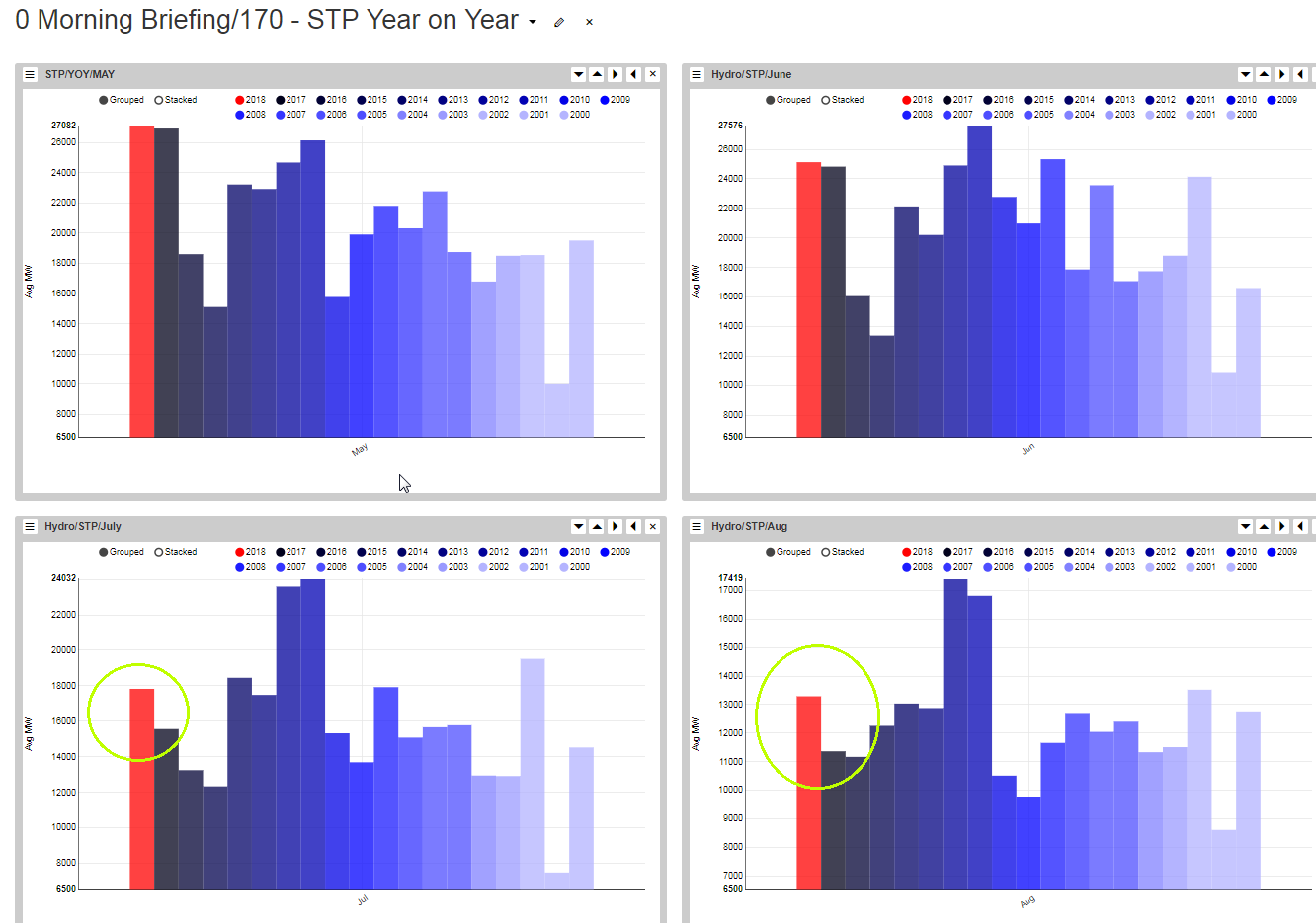 A new theme we’re working on is an accelerated runoff that leaves late June high and dry, setting up July and August as buys. The latest STP projects big water for both months, but these positive CDDs should be taking water out of both, yet we don’t see that in the STP. 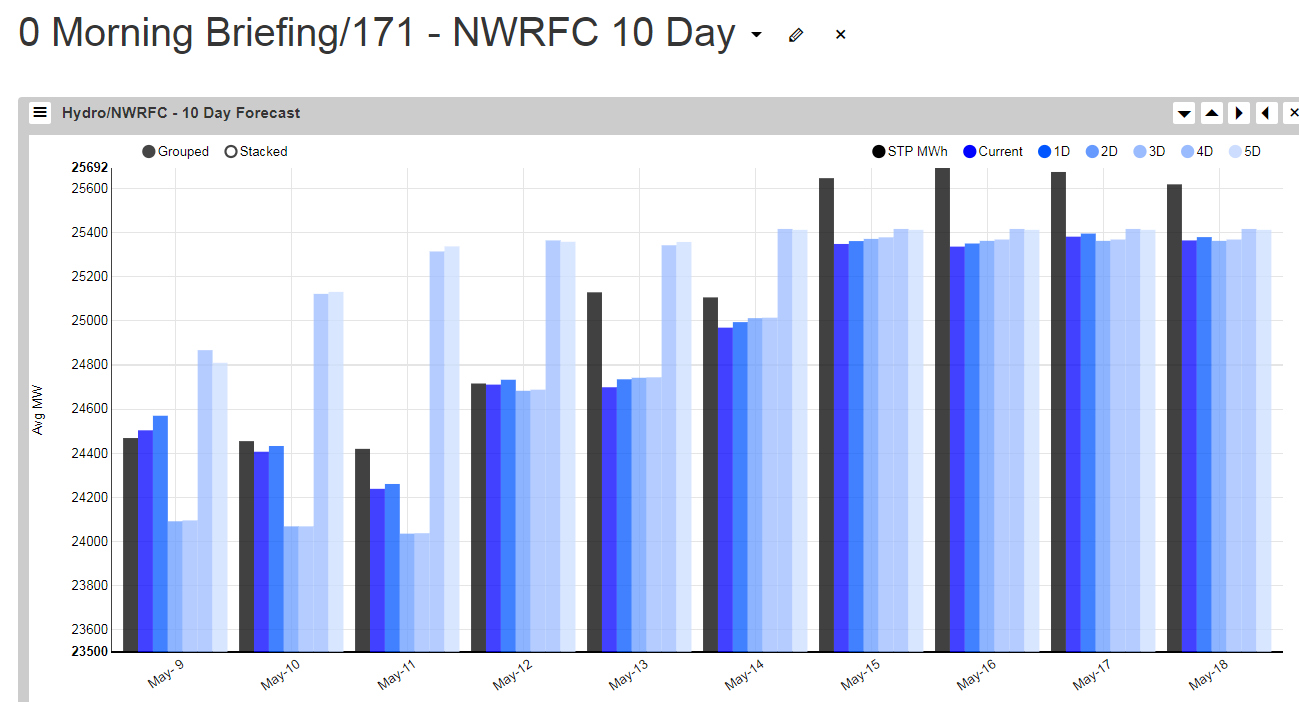 The Random Forecast Center has backed off its ten day, relative to Monday’s STP and we’re not sure where that is coming from. 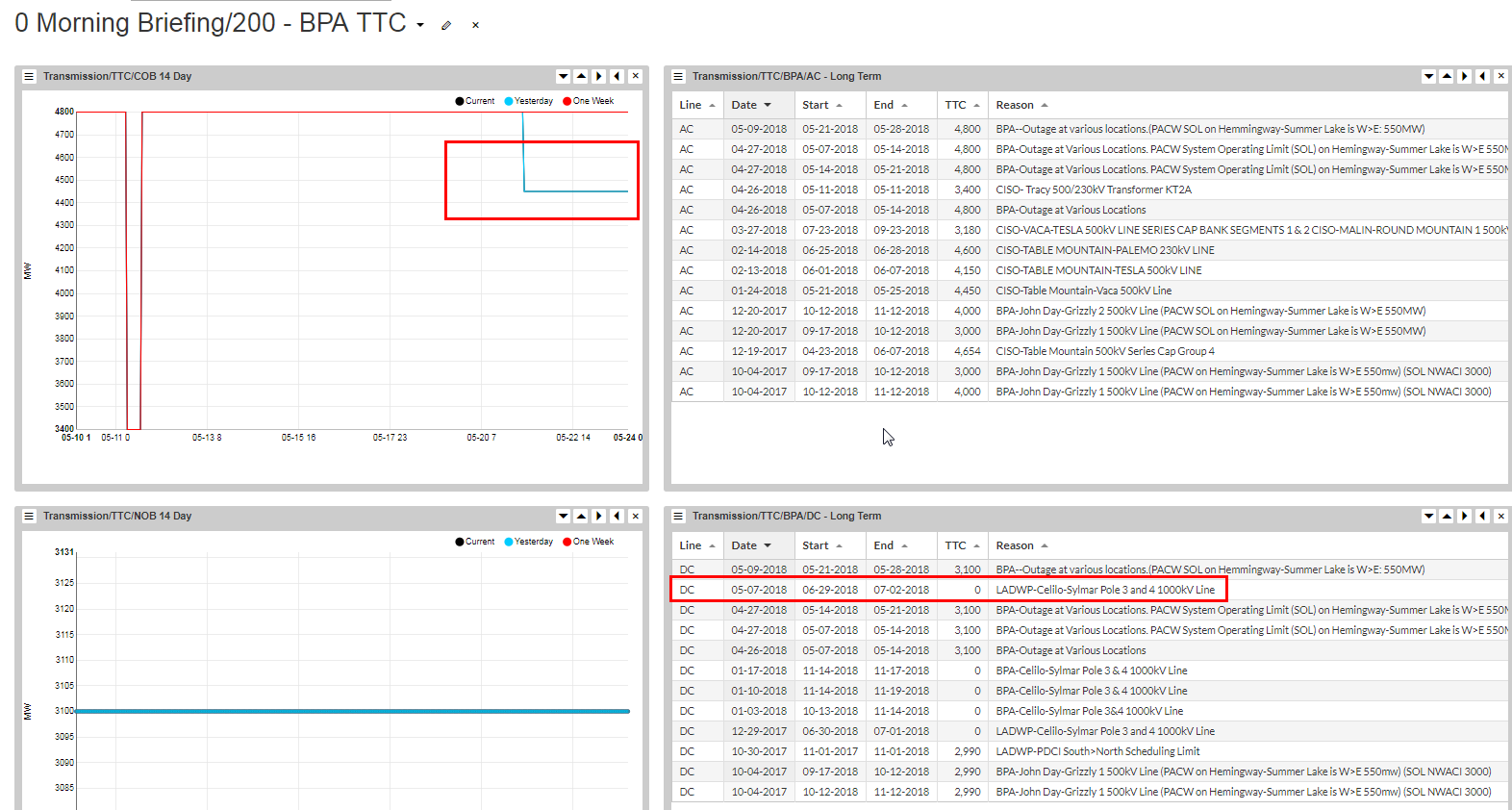 A modest new drate in days 10-15 on the AC, but take note of the new posting on the DC. That line will go to zero for a few days in late June. 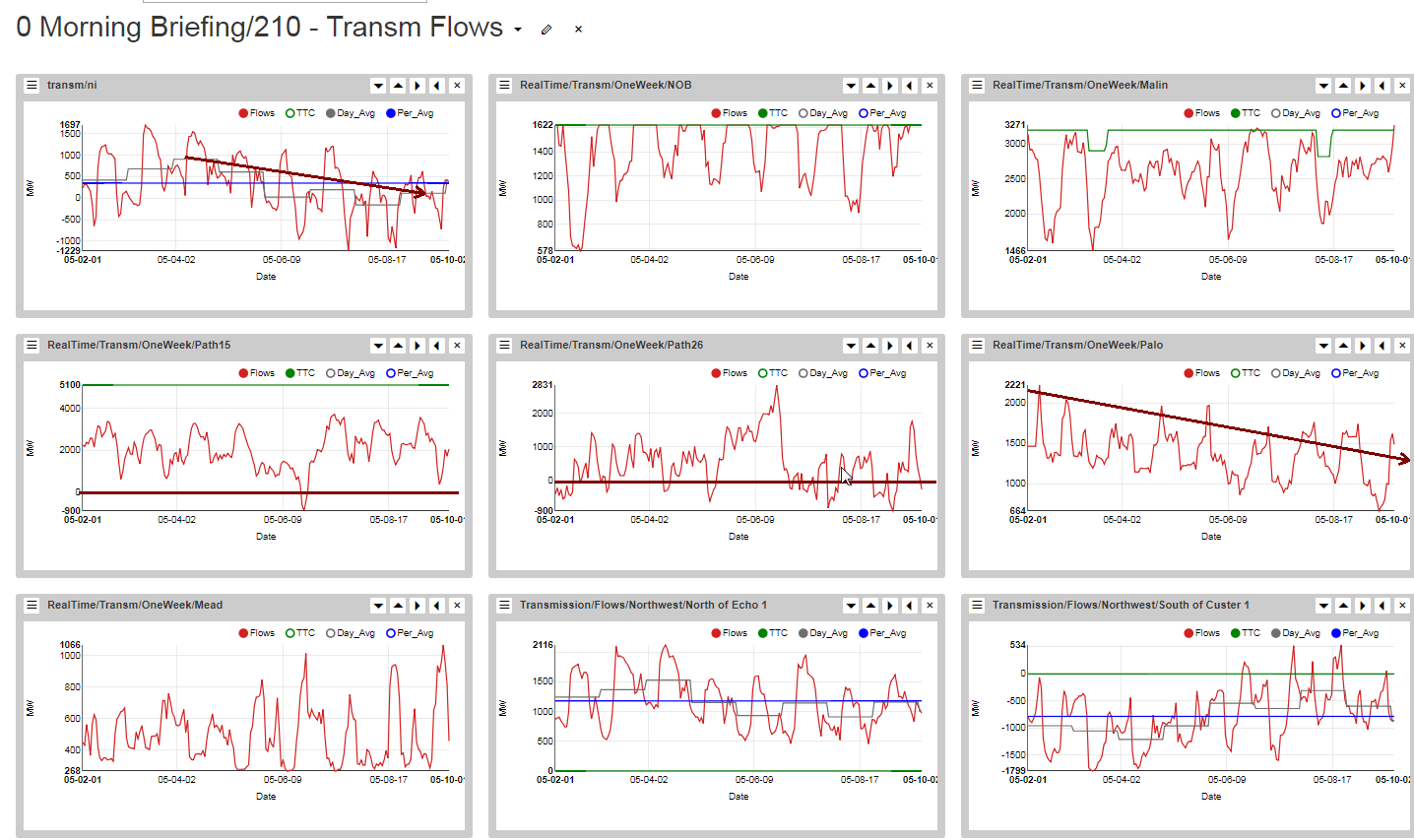 Flows on the Northern Intertie are increasingly southbound; flows out of Palo are frequently backed down.