The West is reverting to the Wild West with extreme heat in the deserts and extreme snowmelt in the Northwest mountains. All of which will make for a choppy ride this week, and hopefully some opportunities to flex your hedging/trading acumen. 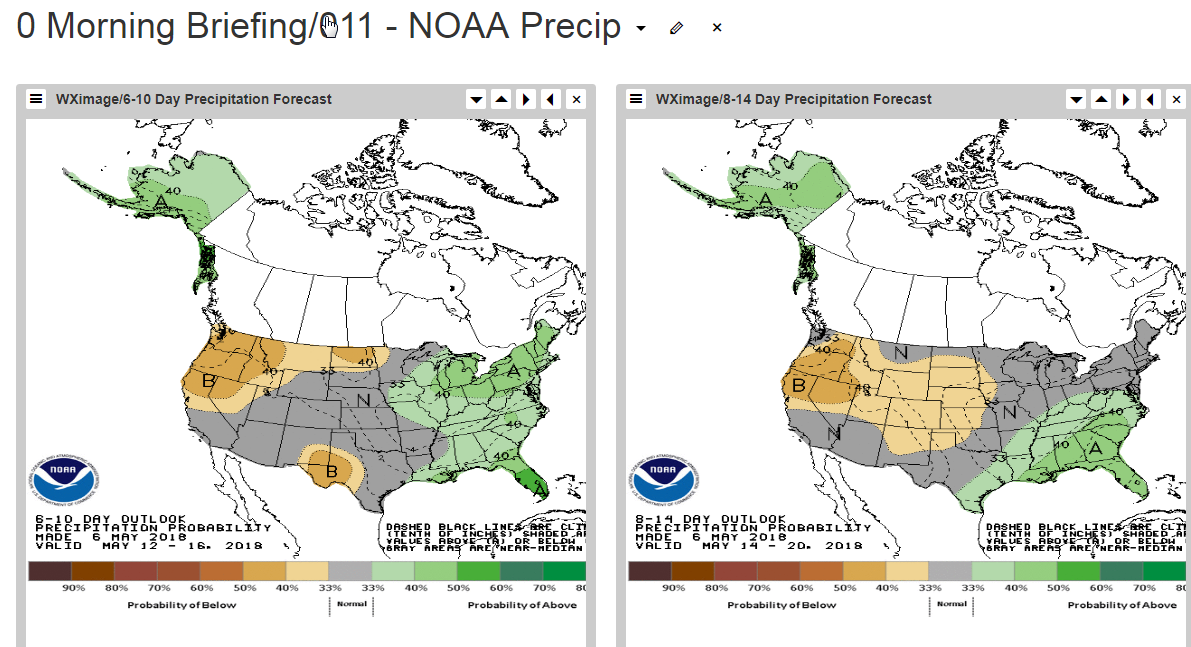 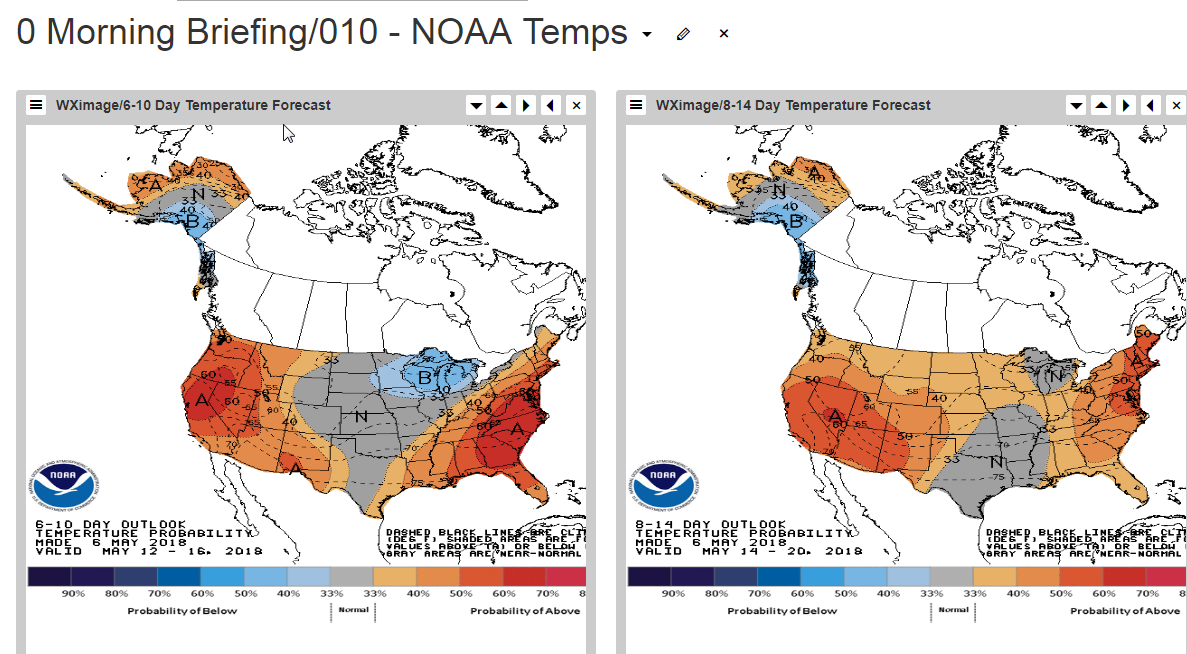 Let’s start with “weather for dummies,” aka NOAA. Northwest is dry, who cares, and the southwest is hot while the northwest is warm – we all should care. 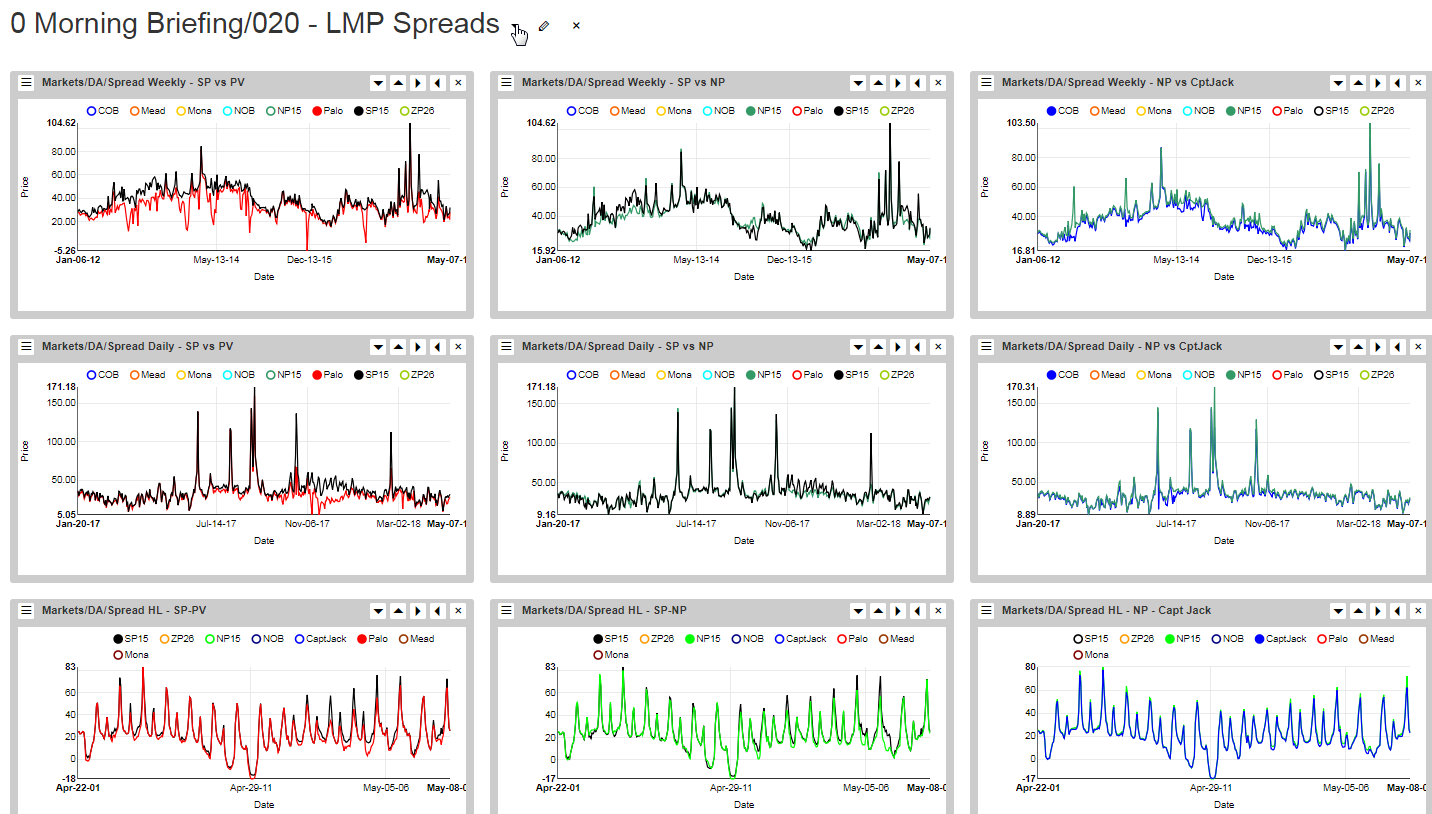 This is a “revised” dashboard that incorporates a new report – Historical LMP Daily Averages for Price and Heat Rates. The genesis of the report was a comment made by a company currently in a trial; that trader’s comment went something like this:

“How does Ansergy incorporate paradigm shifts? We believe we’ve seen just that in the SP15 Heat Rates.” That triggered a desire to see if 1) heat rates did shift; 2) was it fundamentally driven? 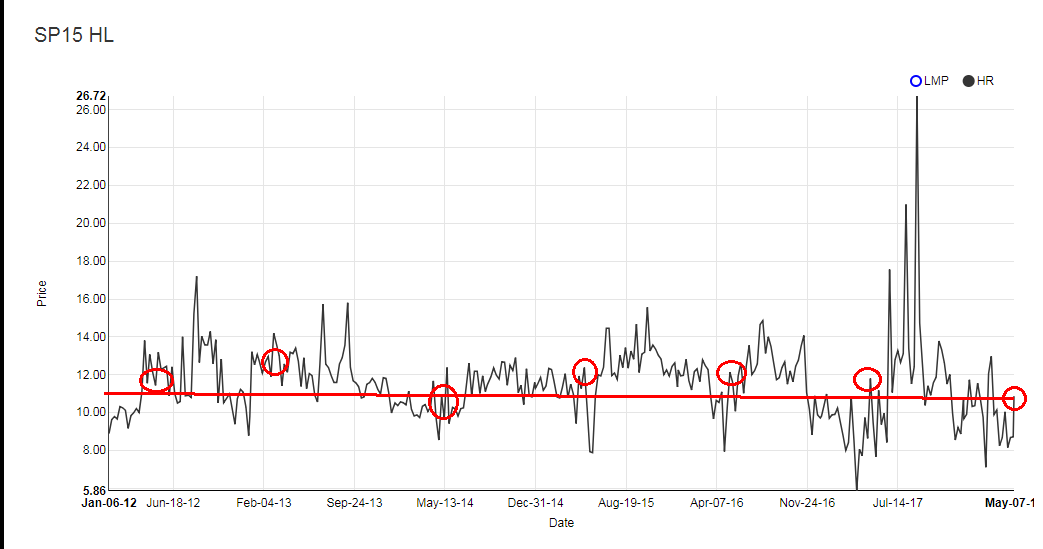 Perhaps the prospective client was right, check out the # of blow-out heat rates last year. But, if we look at today’s LMP DA for SP15 we don’t see a whole lot of shifting of paradigms or anything else, in fact, we see some of the lowest heat rates in the last seven years. I can see how a trader would need to pad term markets for the probability that 2018, or beyond, incorporates a few of the 2017 spikes. But what happens if there aren’t any spikes? Without a normal day realizing a “paradigm shift in bidding behavior,” and without spikes, we are just back to where we’ve been since the Energy Crisis, and all of those insanely high term heat rates will morph into term hate rates. 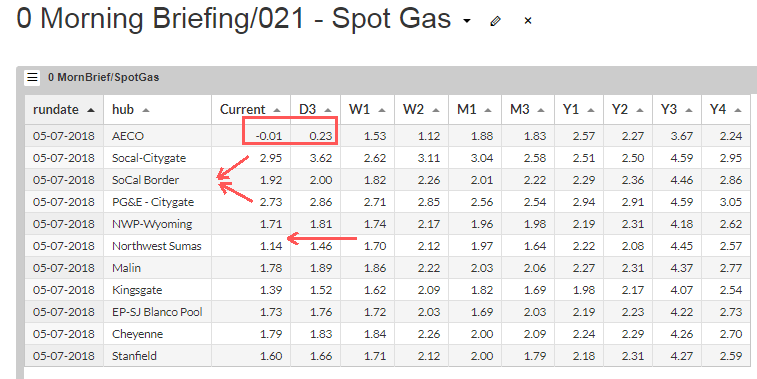 Wow, negative gas prices at AECO? Do I need to fire my vendor (NGI)? Check out the collapse at Sumas, about a 40% drop in a week. 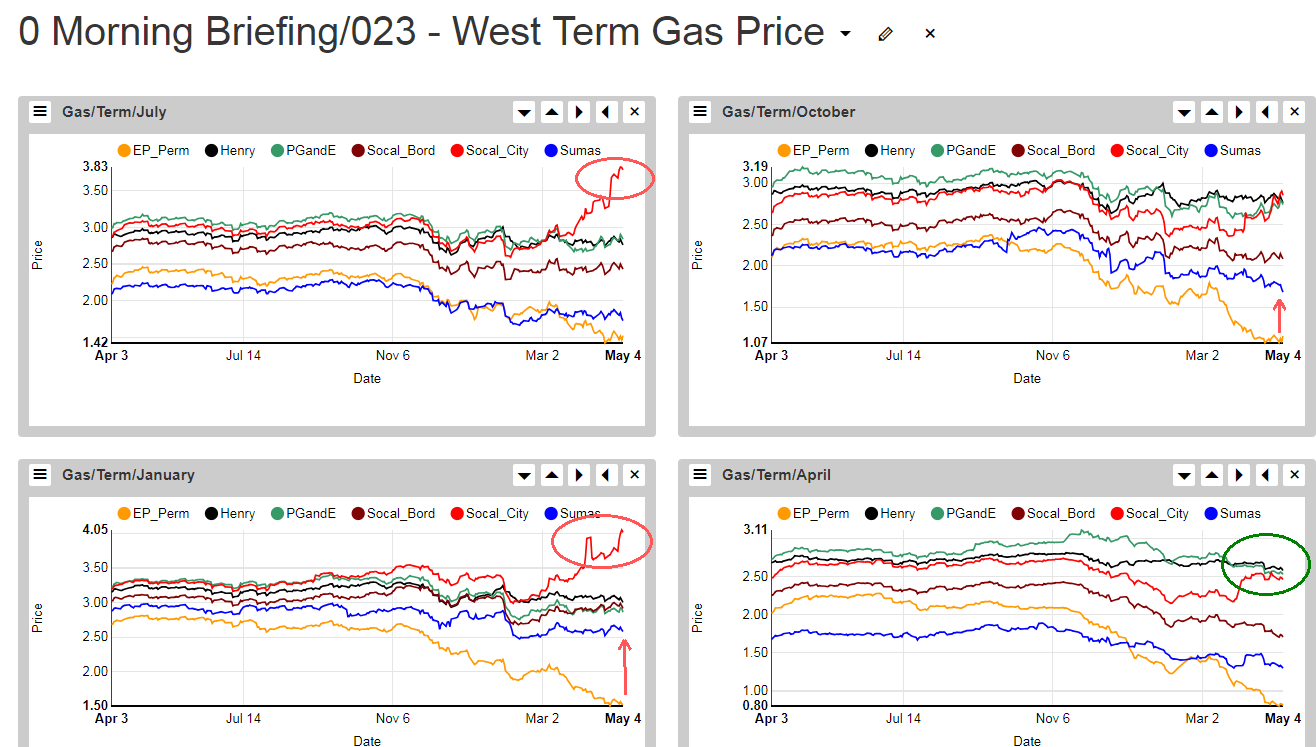 The Socal Citygate premium persists; we also take note of the term meltdown at Permian; seems too much of a good thing (fracking) isn’t a good thing (price). 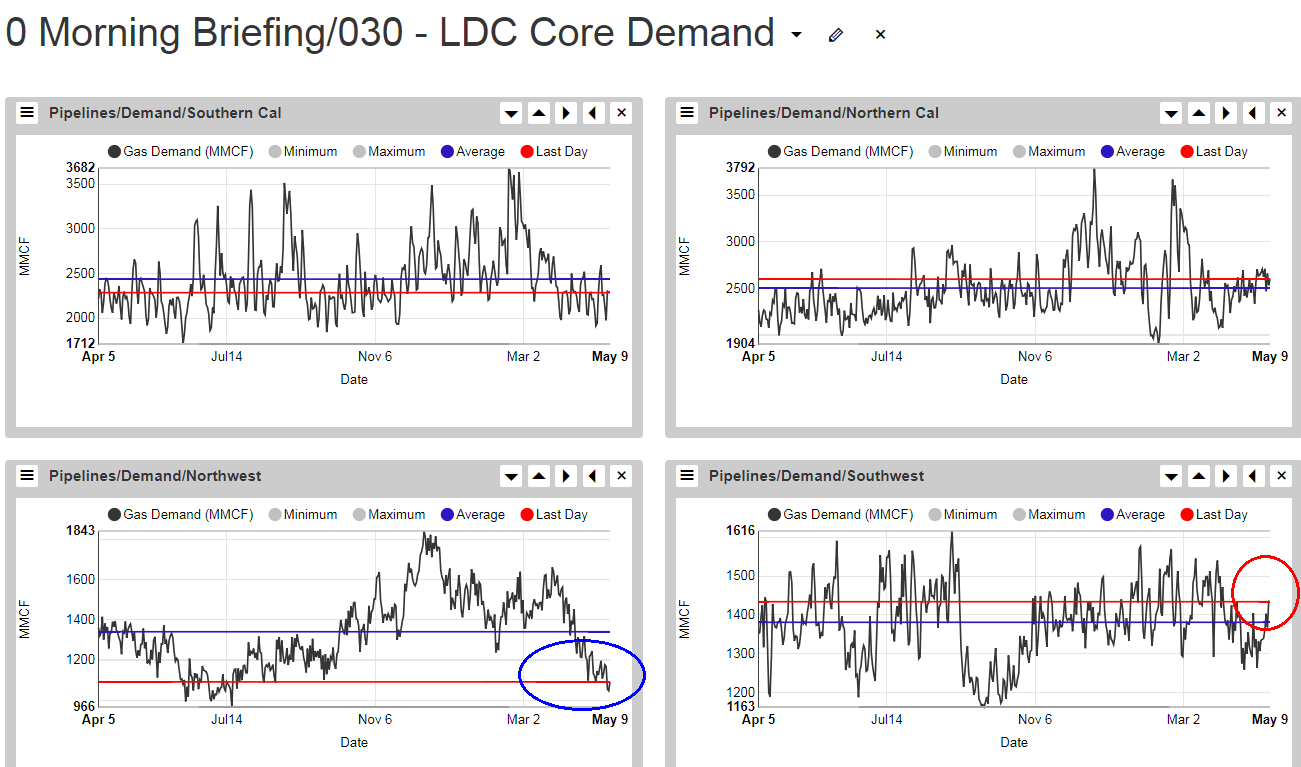 Tale of two gas markets – the Northwest hits a calendar year low in its LDC Demand Index while Palo is soaring. Much of that Palo rally is due to power plants behind the LDC while the Northwest merely is bearish on all fronts  – power demand is seasonally low and hydro generation is near an all-time high. 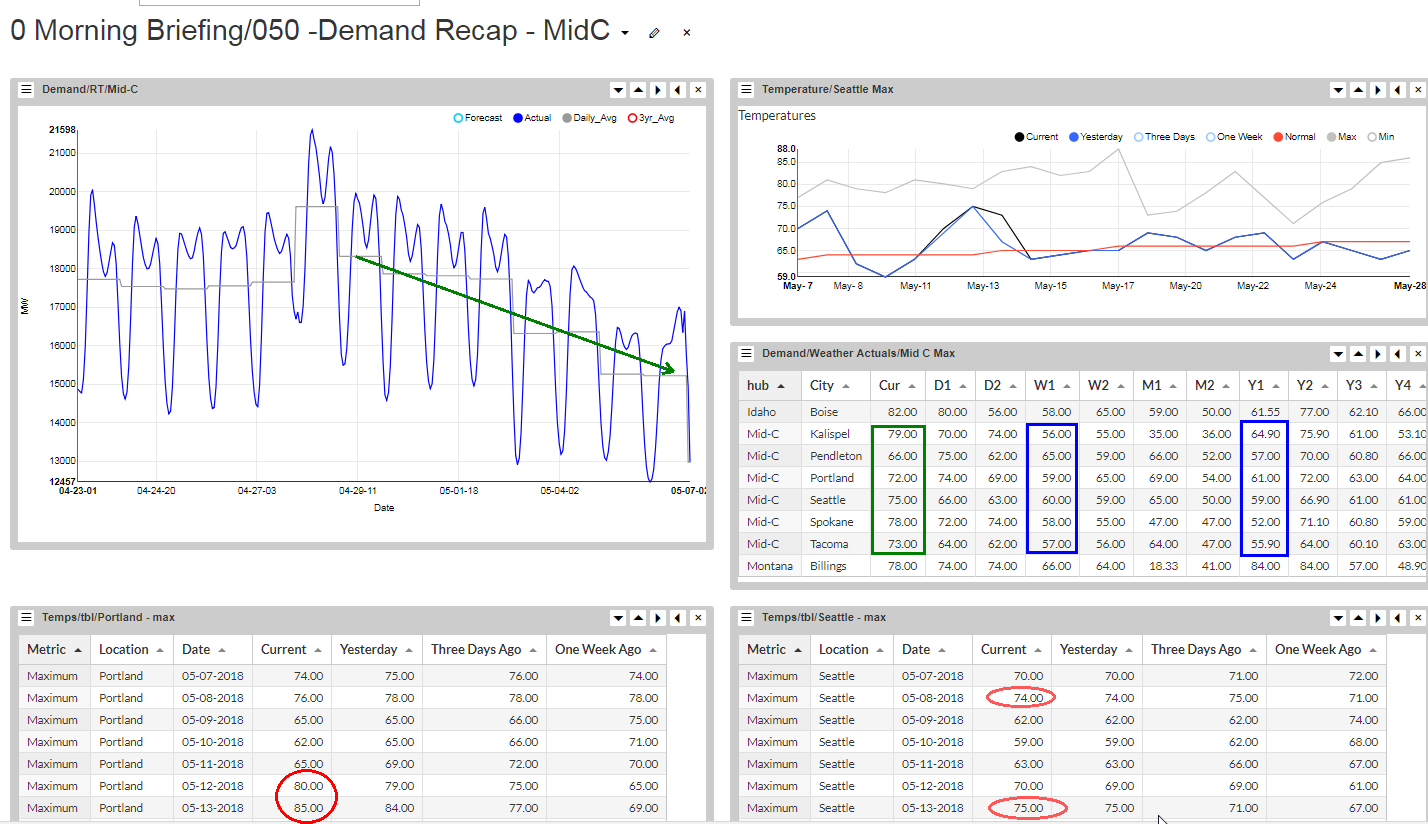 Loads are cratering, the Northwest’s newest HVAC system is called a “Screen Door.” More warm weather in store, not warm enough in Seattle to drive loads but those 80s in Portland should trigger a rally there. More on that heat in the hydro section. 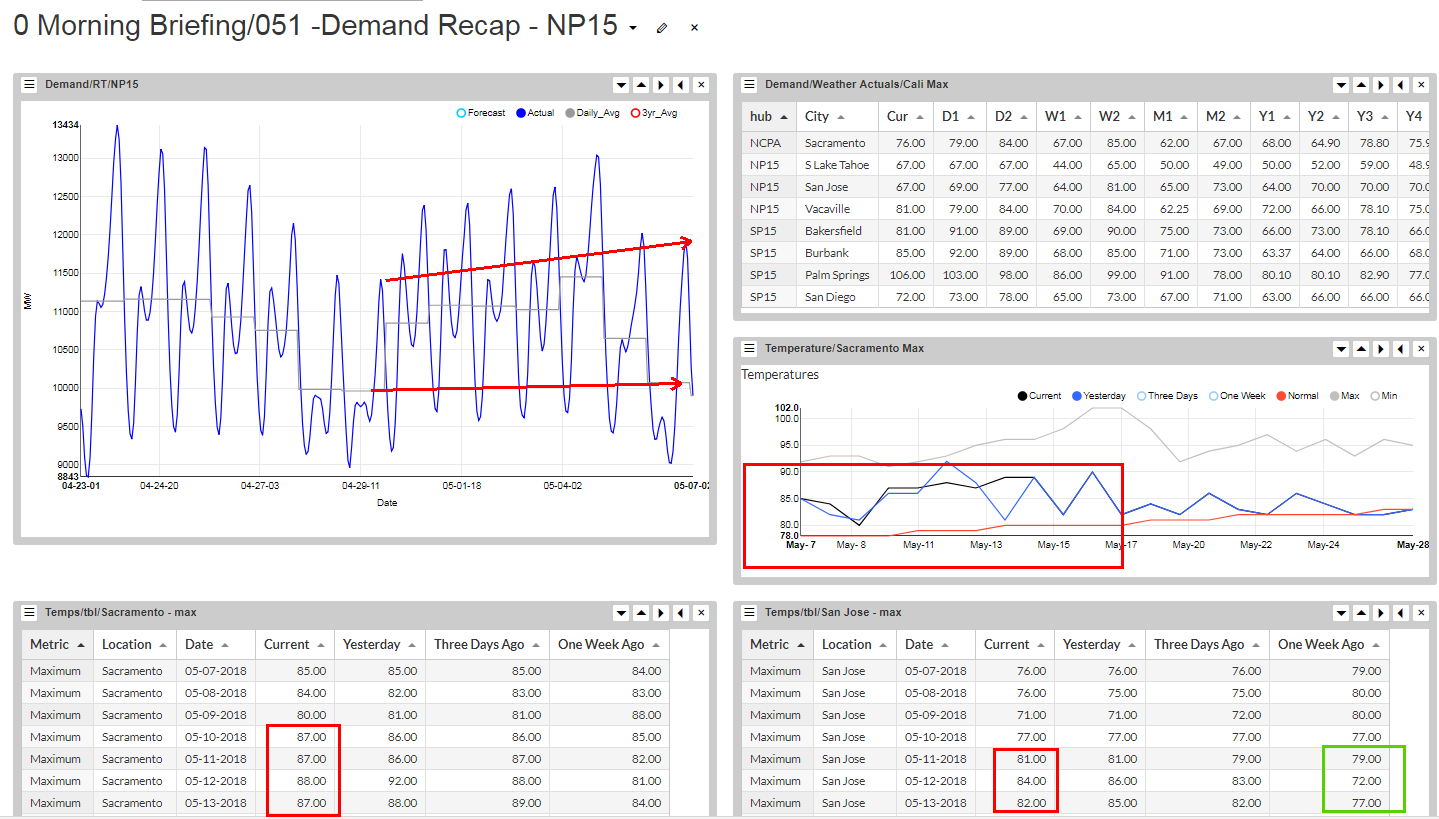 NP’s loads are more sideways than any other direction, but the hub is looking at ten days of above-average temperatures, yet none of the days are blistering hot, not hot enough to drive loads real high which would drive price. 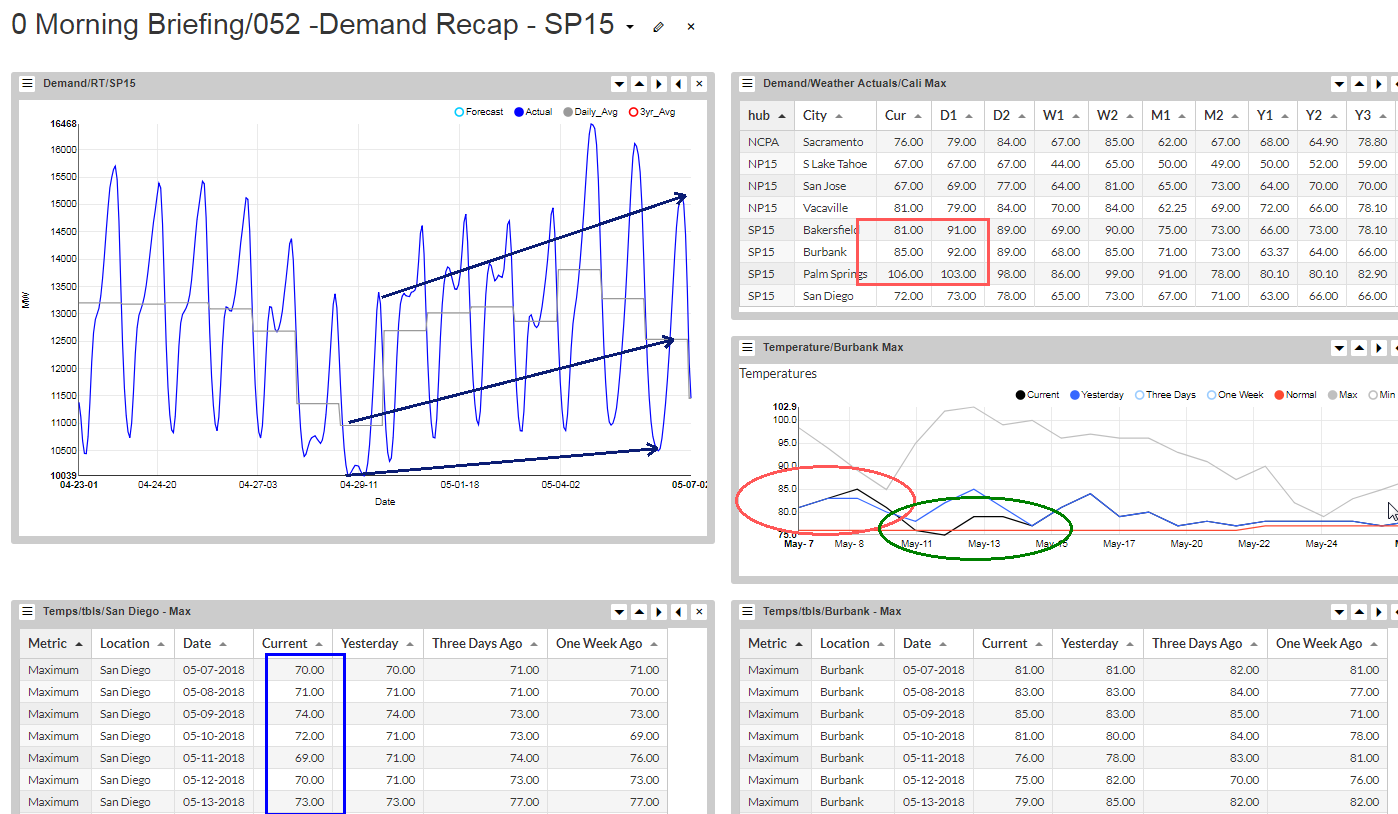 SP is hot; Palm Springs was 106 degrees yesterday; Burbank hit the mid-80s, and look at loads soar. But alas, San Diego and all coastal loads are just temperate which will put a lid on how high LMPs can clear. 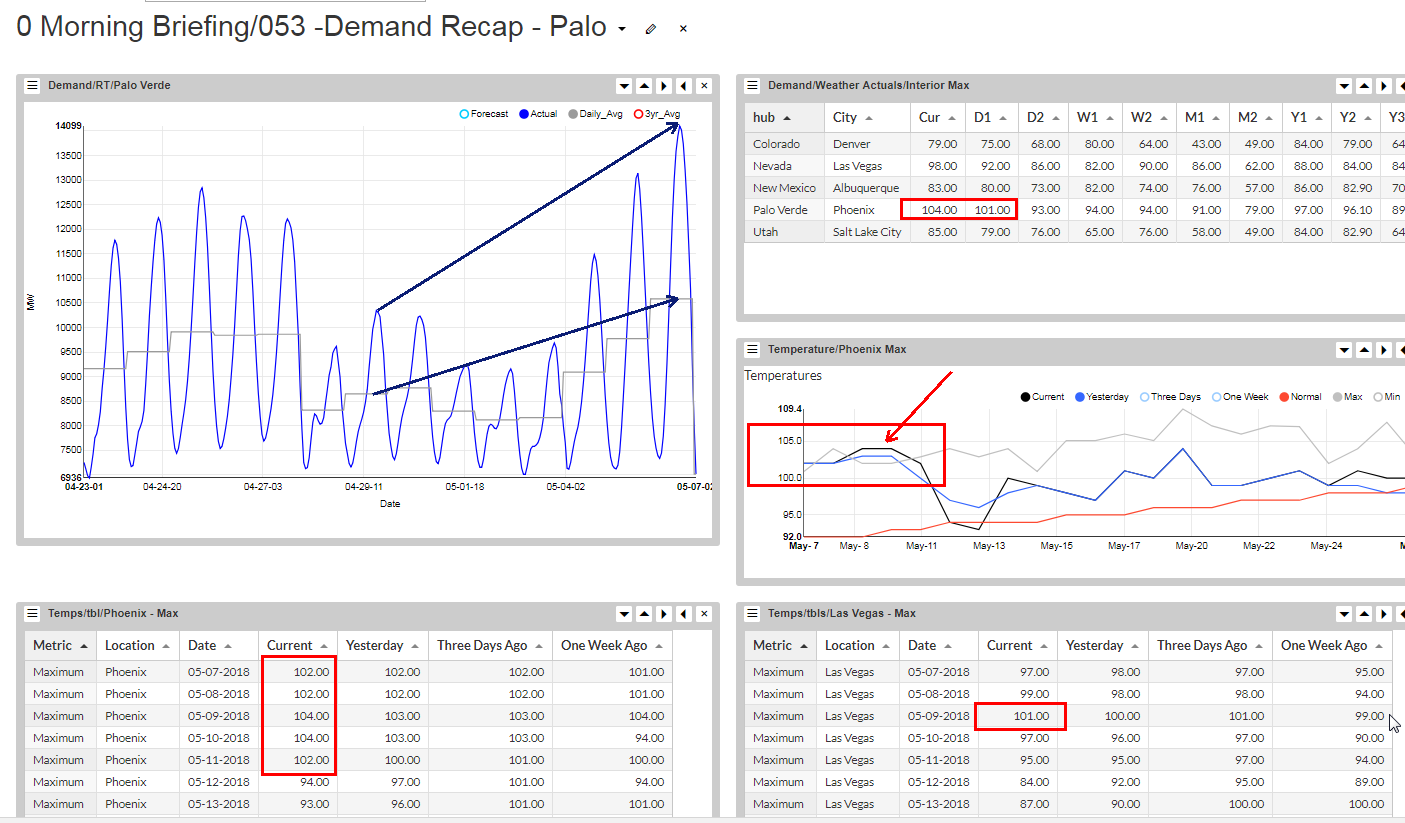 Palo Verde, on the other hand, is blistering hot, its Sunday loads were higher than any hour last week, and the heat lingers for a week; seven days of triple digits and it is only May. Several days flirt with ten-year highs. 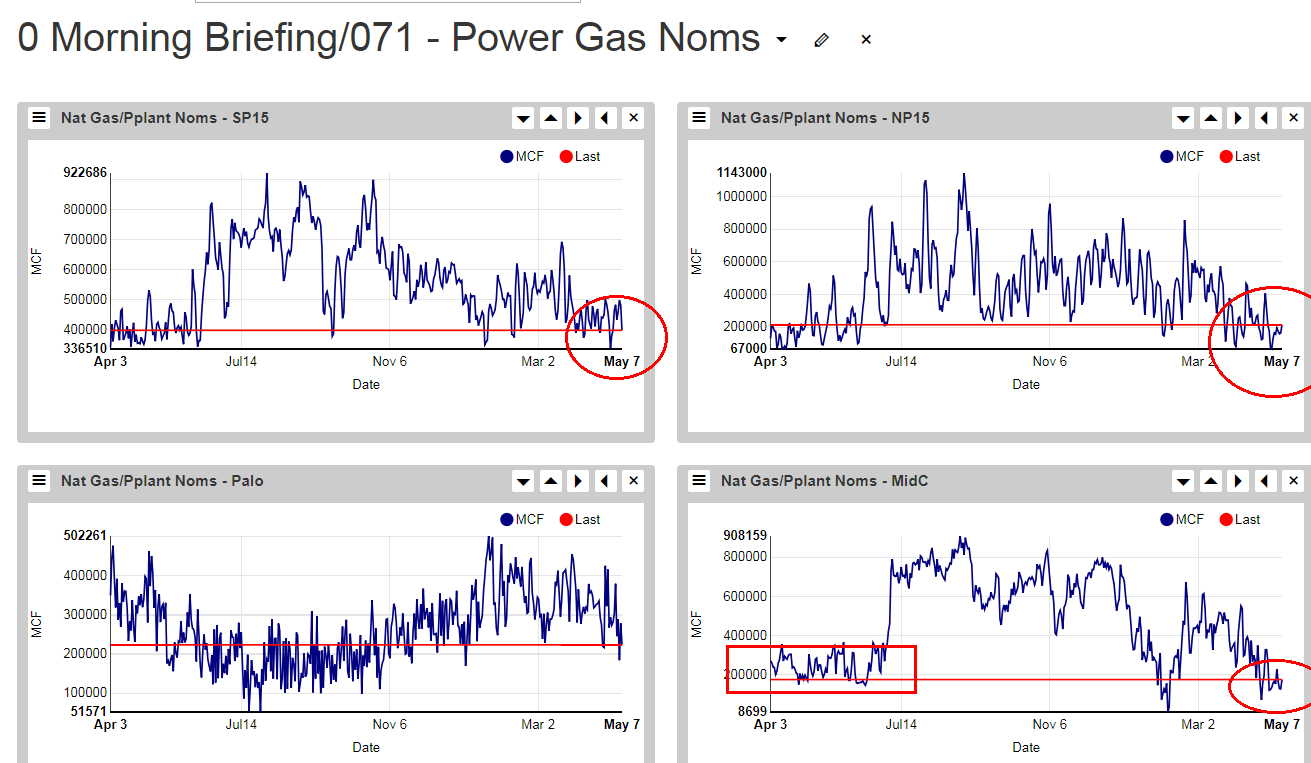 Gas Noms for power plants are at a seasonal low in the ISO and the Northwest. 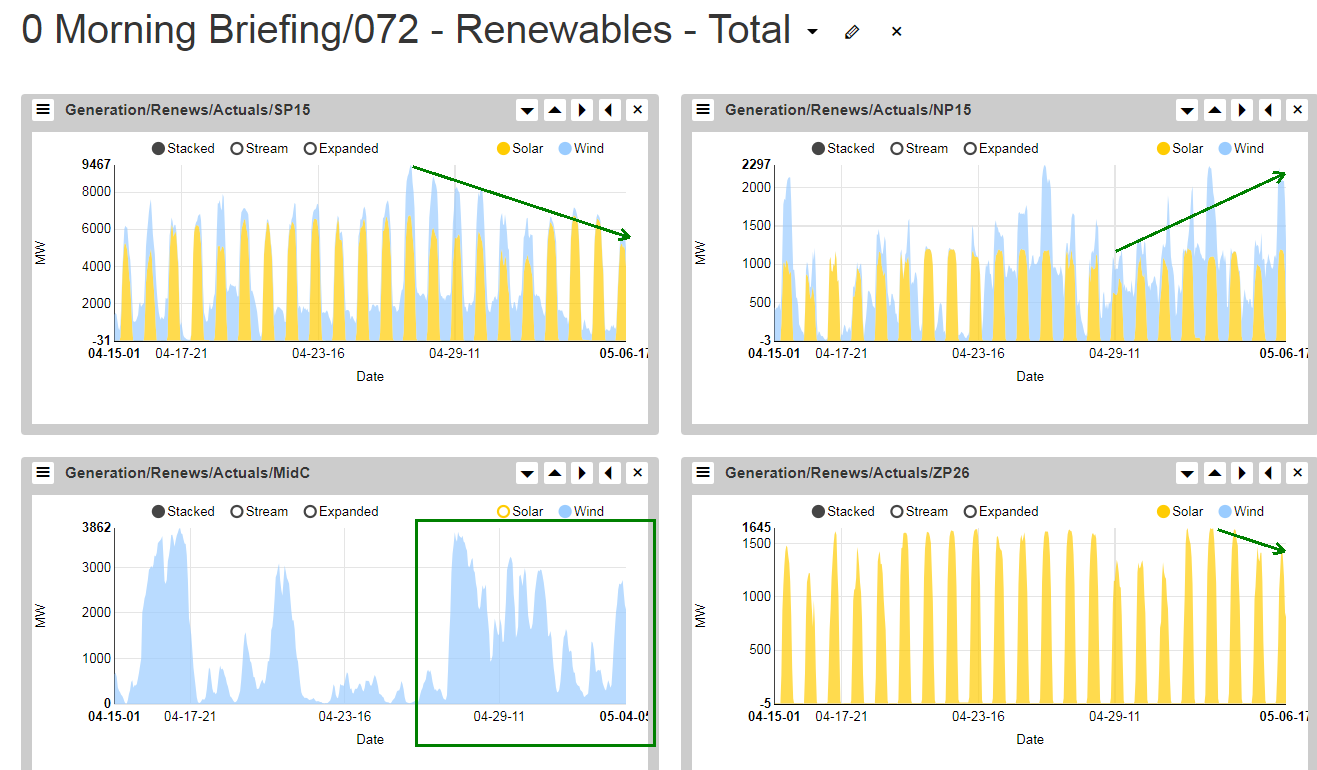 The Northwest realized a substantial block of wind over the last few days; the rest of the renewable actuals were a mixed bag. SP’s combined is off; NP’s is up.

It’s May 7, of course, we’ll cover a lot of hydro in today’s blog. Two things interest us today:

This is a new dashboard that measures SWE by river basin; where the Red Line goes straight is the most recent reading. I think the report is fascinating as it can quantify the current year with a historical one. I’ve flagged the years that are most similar to this one. Take the Flathead, for example: 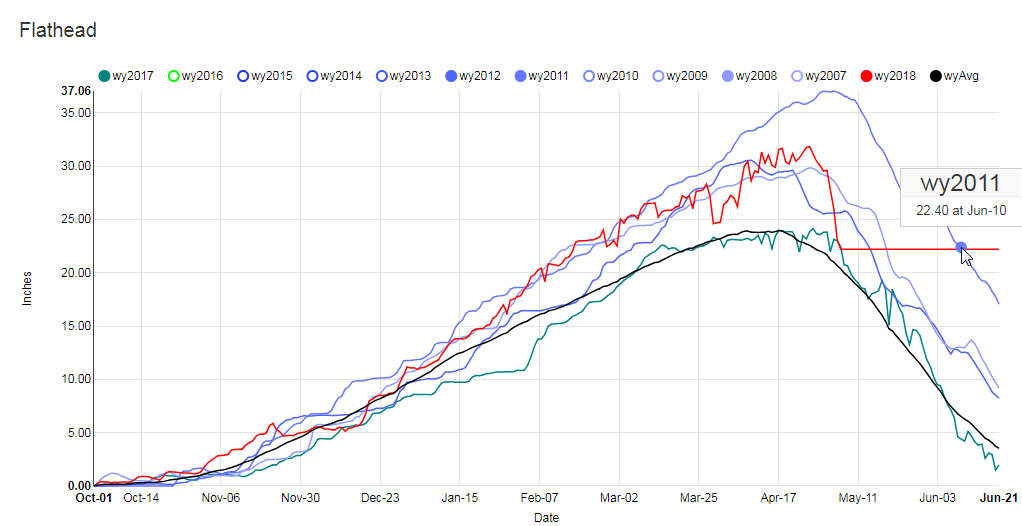 Three of our design years had more snow on May 7 than 2018: 2008, 2011, and 2012. Why is this important? Because we know how flows were realized in those years which gives us confidence how 2018 will play out. Another exciting feature of this chart is the ability to quantify, in days, the status of prior runoffs versus this year. The water year 2011 reached the same snow depth on June 10 as today; that is over a month behind this year. Water Year 2008 matched current levels on May 19 and 2012 on May 14.

Let’s look to rivers to see what that melted snow hath wrought:

The Pend Oreille, Clark Fork, and Kootenai are still rallying; since there is ample snow, those streamflows will continue to grow for the next couple of weeks. The Spokane is  stuttering, but shall resume its rally:

There is more snow in the Spokane Basin today than there was at anytime last year, even after posting several days in the 80s! What’s coming, temperature wise?

Two more warm days, a slight cool-down, then back to heat, like the 80s in Spokane and high 70s in Kalispell. The freshet will build in strength; these rivers are a long ways from cresting. Let’s look at Coulee:

The first hour of breaching 200kcfs discharge, but the pond is not filling yet, so BPA has a full quiver of storage bullets in its arsenal. We’ll be watching to see how quickly that reservoir gets full; the rest are refilling:

Lots of room to capture this water, which may be just enough to keep the gas on the margin which is what the term markets reflect. We doubt May can support every day or June, but so far its worked out that way. Never underestimate BPA’s ability to manipulate markets. 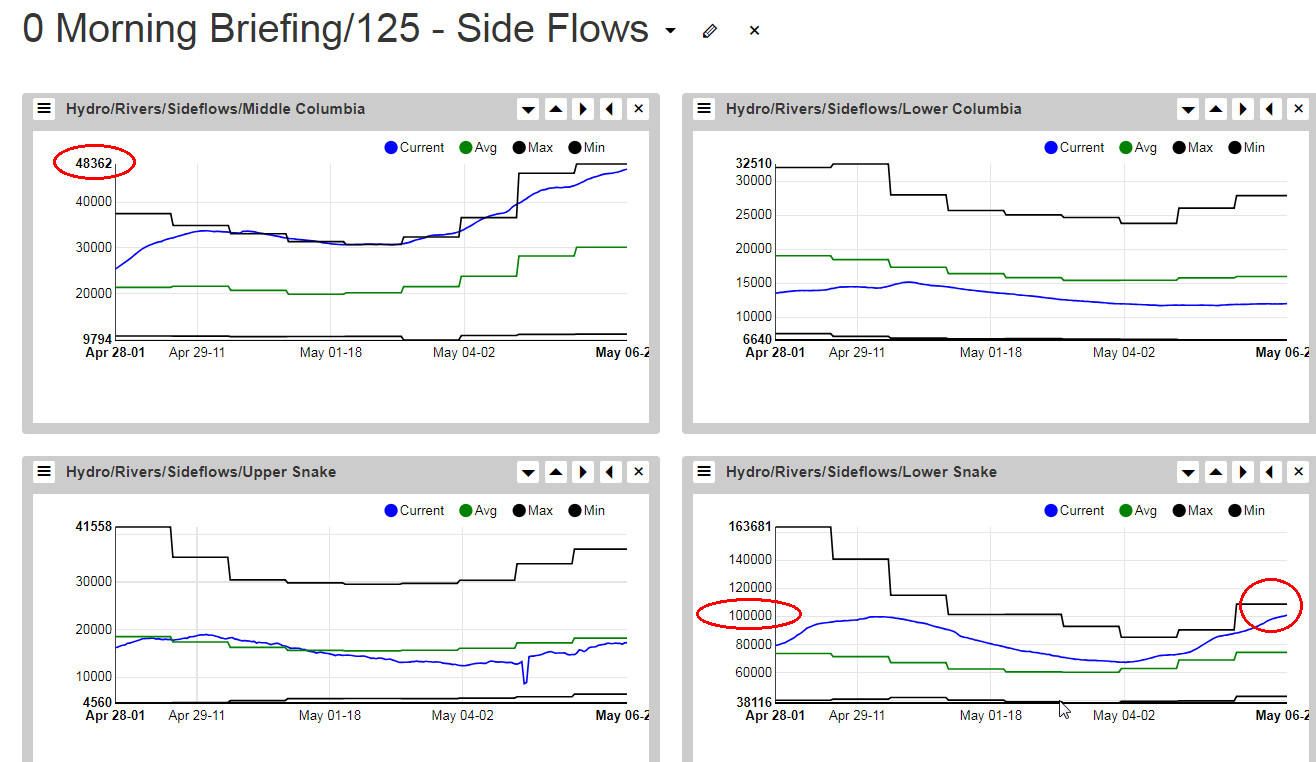 The Middle Columbia Side Flow Index is setting record highs, now nearly 50kcfs is entering the mainstem Columbia, below Coulee. We still think we’ll get close to 500kcfs at Bonneville before this is all over. 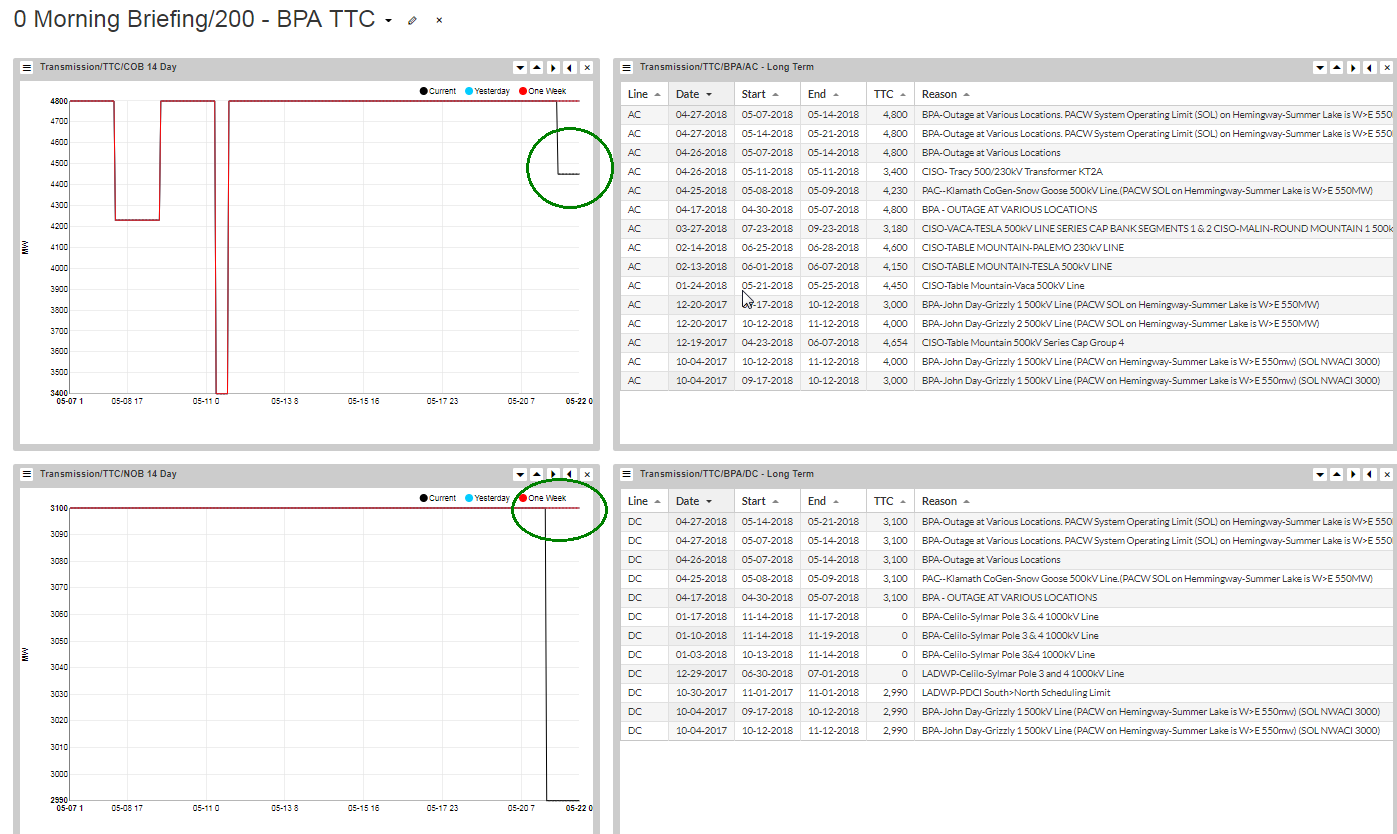 Some new cuts in TTC at the backend of the forecast; modest, yet bearish. 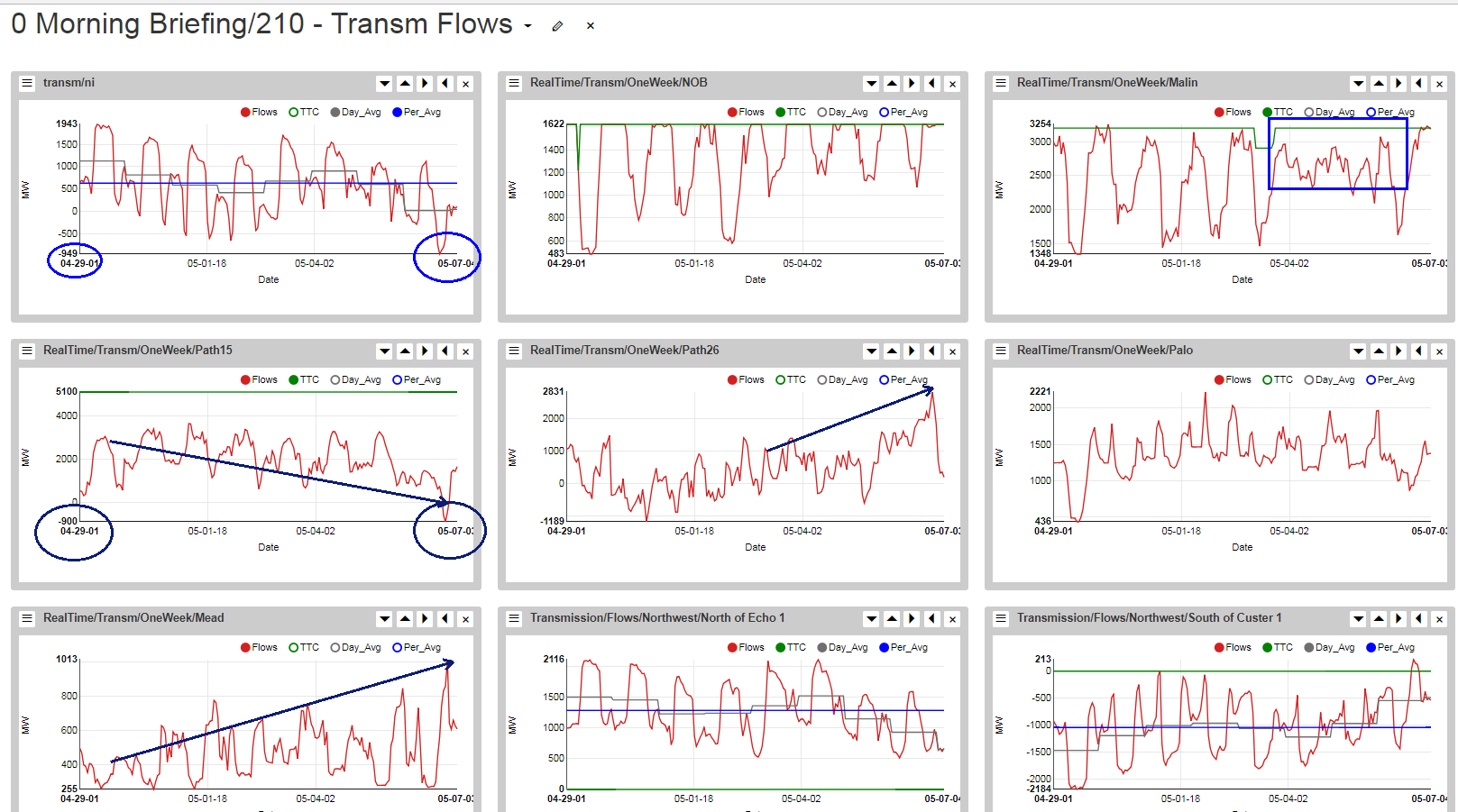 Powerex was a strong seller, pushing nearly 1000 MW on one hour into the MidC. How long can that continue? I guess as long as they find themselves longer than demand: 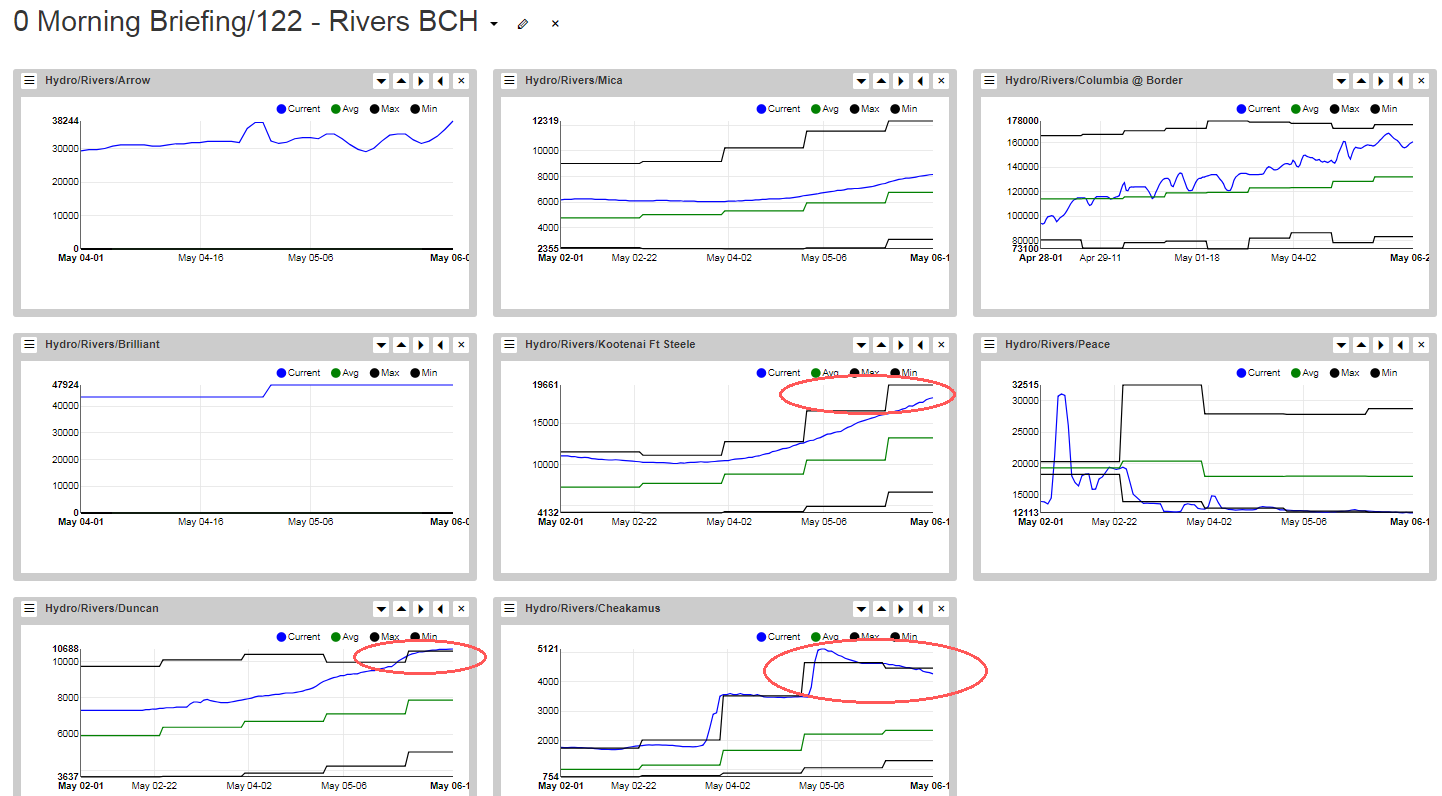 Check out their mostly “unregulated” flows on the Kootenay and Cheakamus – each setting ten-year highs. With no load and massive natural river flows, our friends up north have no choice but send MWH to their American brothers and sisters.

I guess the folks at Mead and Palo feel the same way, check out the strong exports into ISO SP from both. Also, take note of backward flows on Path 15, there is something we haven’t seen for awhile.

Love the south, hate the north – call me a Reb. More on that in a subsequent post.