May checked in as the only month with an increase, and it was just 332 aMW.  June fell for the second consecutive week after shedding 310 aMW, but July and August show much larger declines.  July came off 1,077 aMW, not sitting at the lowest total in four weeks.  August checked in with its lowest forecast of the year after dropping 1,232 aMW.

Mike’s Take – this is the dumbest STP forecast in years. The early surge barely started, now NWRFC is shedding water; we get “shifting” water, but not shedding. BOM and June wash, but NWRFC has removed 1100 aMW of water equivalents in a week. Either jack May or June 2200 aMW, or don’t cut. The snow didn’t disappear.

May can attribute its jump from increases during the 8th through the 21st, while the rest of the days stayed mostly flat.  June was mostly flat as well, at least until the last three days of the month where the floor began to fall out as the 30th showed a drop of more than 2,000 aMW.  July continued that sharp decline for another week, then stayed 800-1000 aMW behind for the remainder of the month.  August held a similar sustained drop as well, albeit slightly larger. 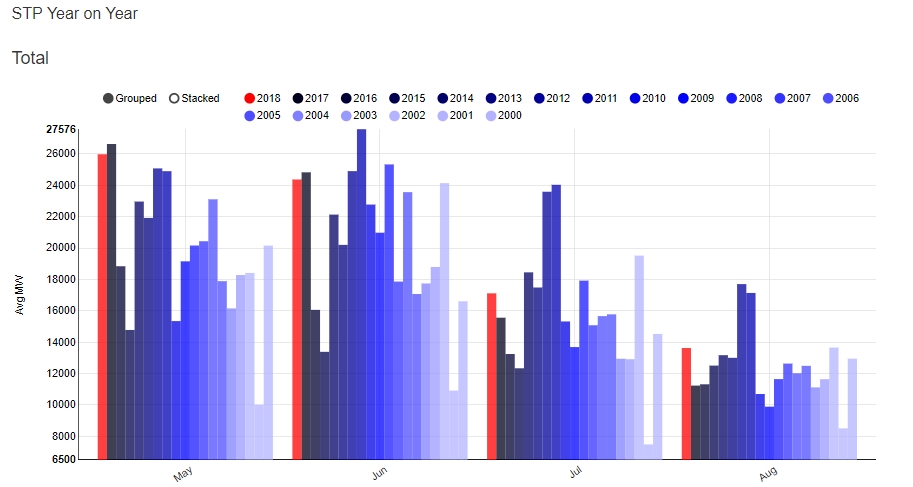 May is now just 300 aMW shy of 2017, putting it at the second-largest year since 2000.  June fell behind 2017 in the latest update, while July and August slipped further into an average year.