Well, things just got a lot uglier for the front-end of the Mid-C. If you were playing the timing game, you should be out of May, or short May, and be buying Aug and Sep, or at least be prepared to buy those two on the dips, if there are any. June is a train wreck and doesn’t matter how much snow melts in May; there is too much of the stuff. July is the new bubble month.

Palo has some real heat heading its way, but not for a week; NP gets warm, but SP doesn’t. 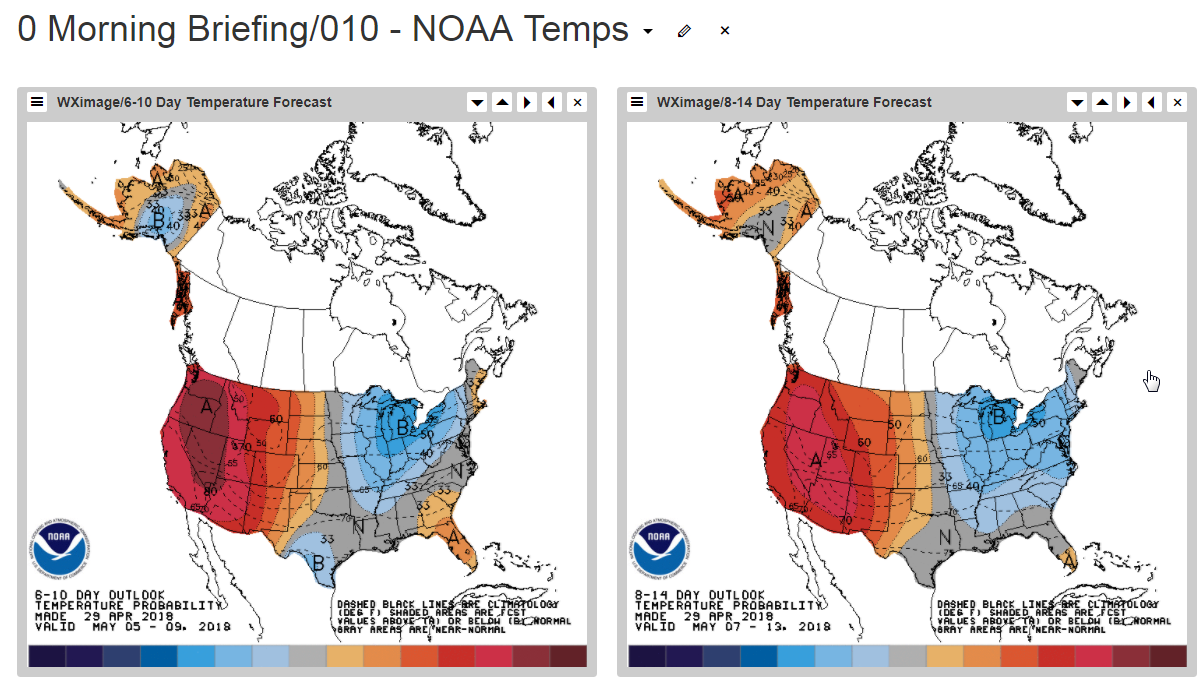 A few uncongested negative DA prices on Saturday, Sunday firmed up a bit more, but overall the prices are weak. 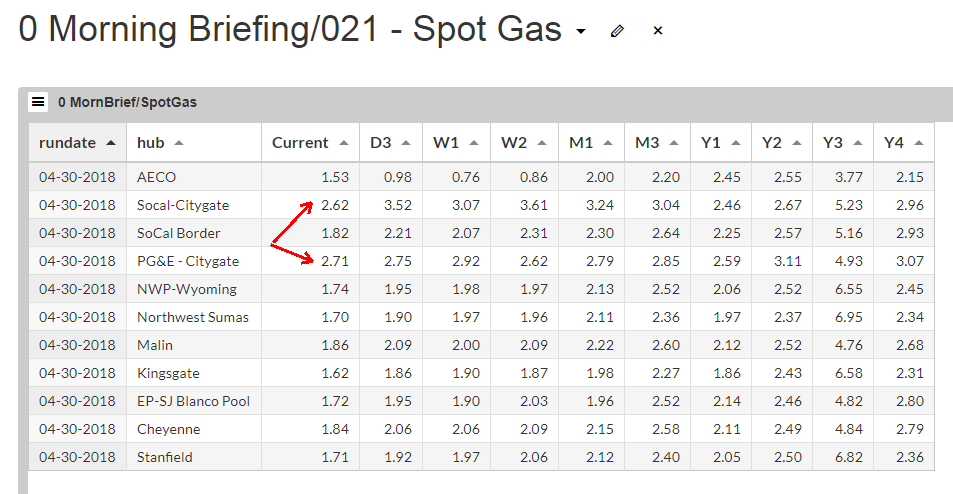 That mountain lion named Socal Citygate seems to be de-clawed for the time being, if you use spot prices. If you prefer the term, the cat’s tail is violently twitching while her hair stands on end: 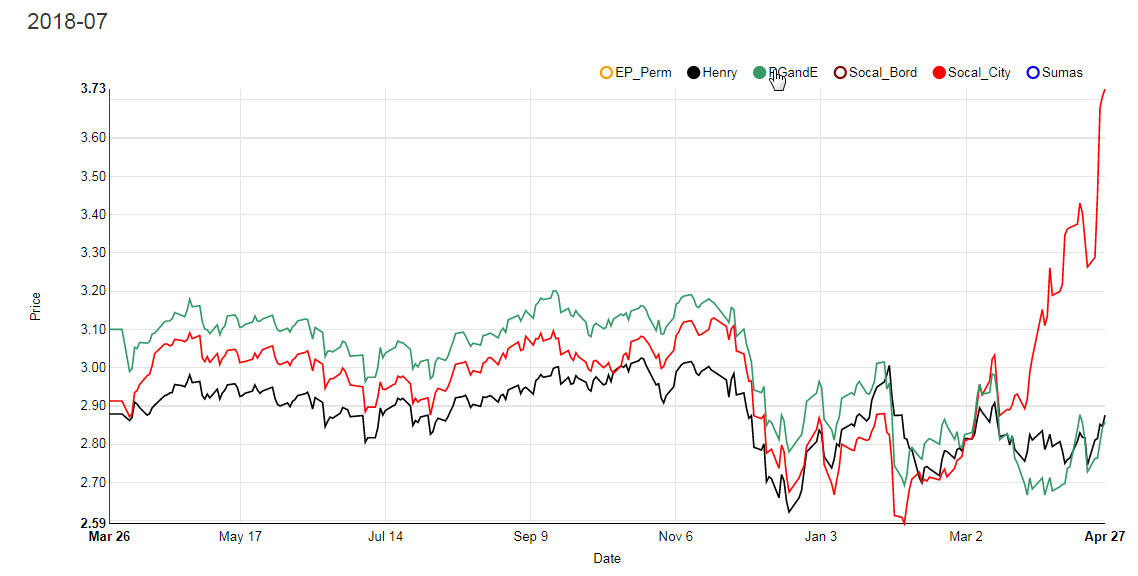 July SCG is like the bitcoin before everyone woke up. And I can’t come up with any logical reason why it’s soaring to the stars; the fundies are more bearish than bullish.

Storage added nearly two bcf in a week; it is now nine bcf ahead of last year. PG&E is up a 1.5b but lags 2017 by fifteen bcf. We saw a hiccup on Needles, but its back to flowing as it has the last four months. Even if LA bakes at 110, we struggle to see how SCG could fail to meet demand; and that is a big if. The trend of late is chilly in LA, not hot. 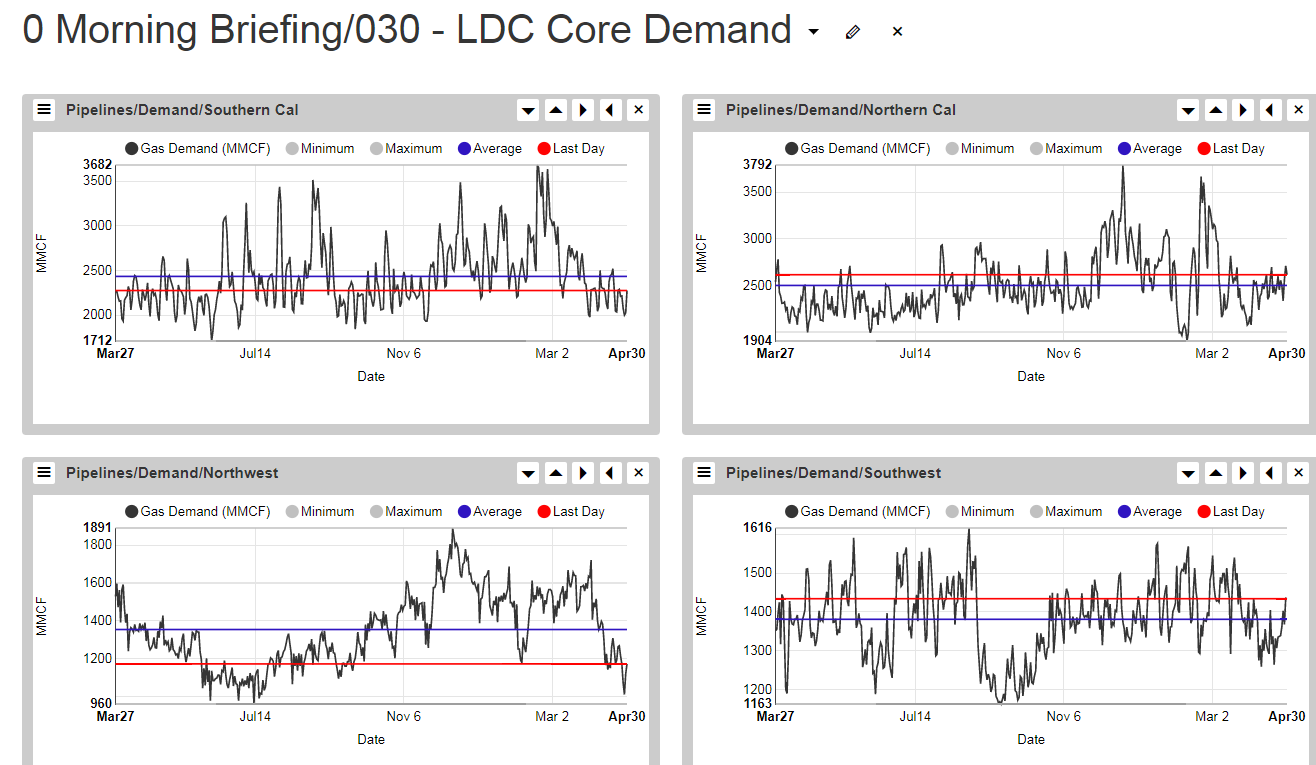 Our LDC index demonstrates how bearish gas demand is in the WECC, at least everywhere but the Southwest. 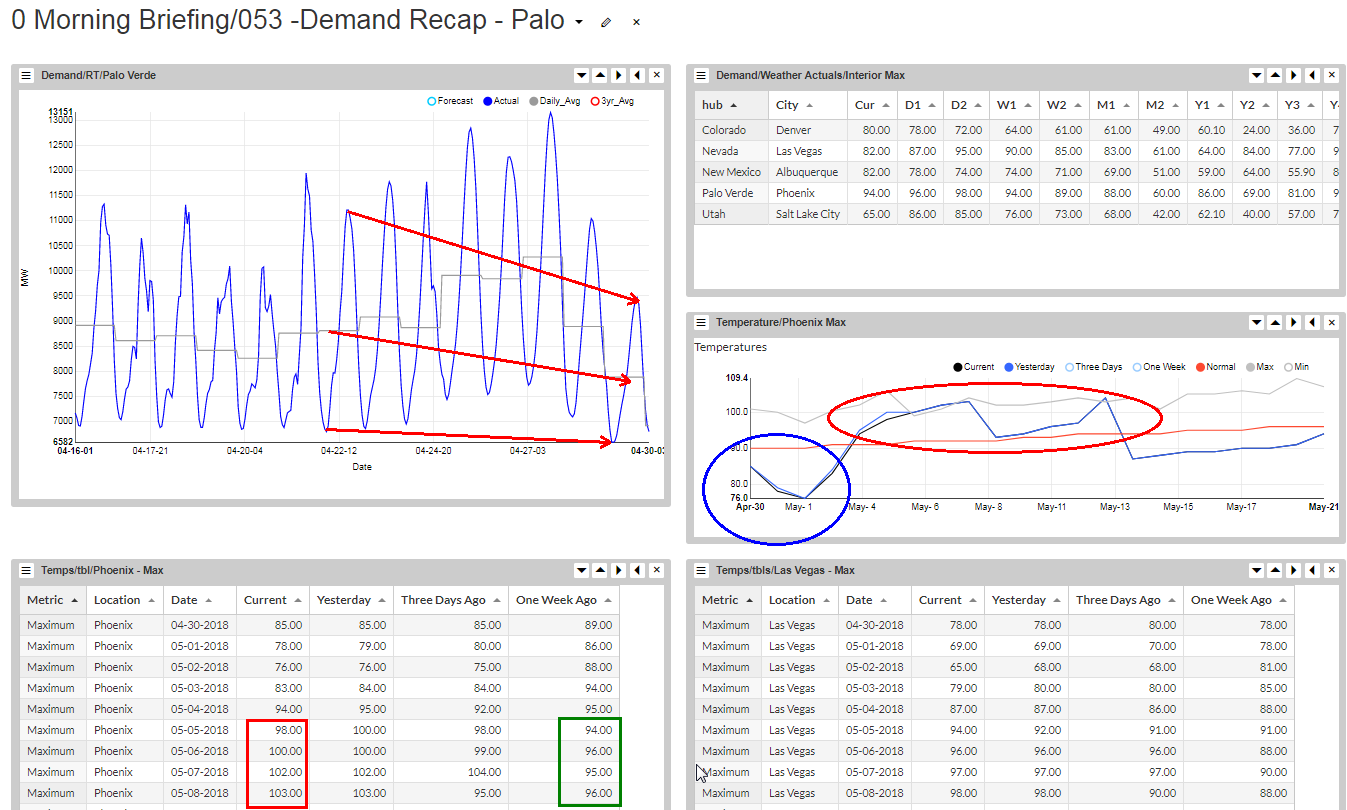 Phoenix has a few cold days to work through this week, then is poised to realize record temps for a 3-4  day stretch. Nothing too stressful, that happens when temps > 115, but it is only May. 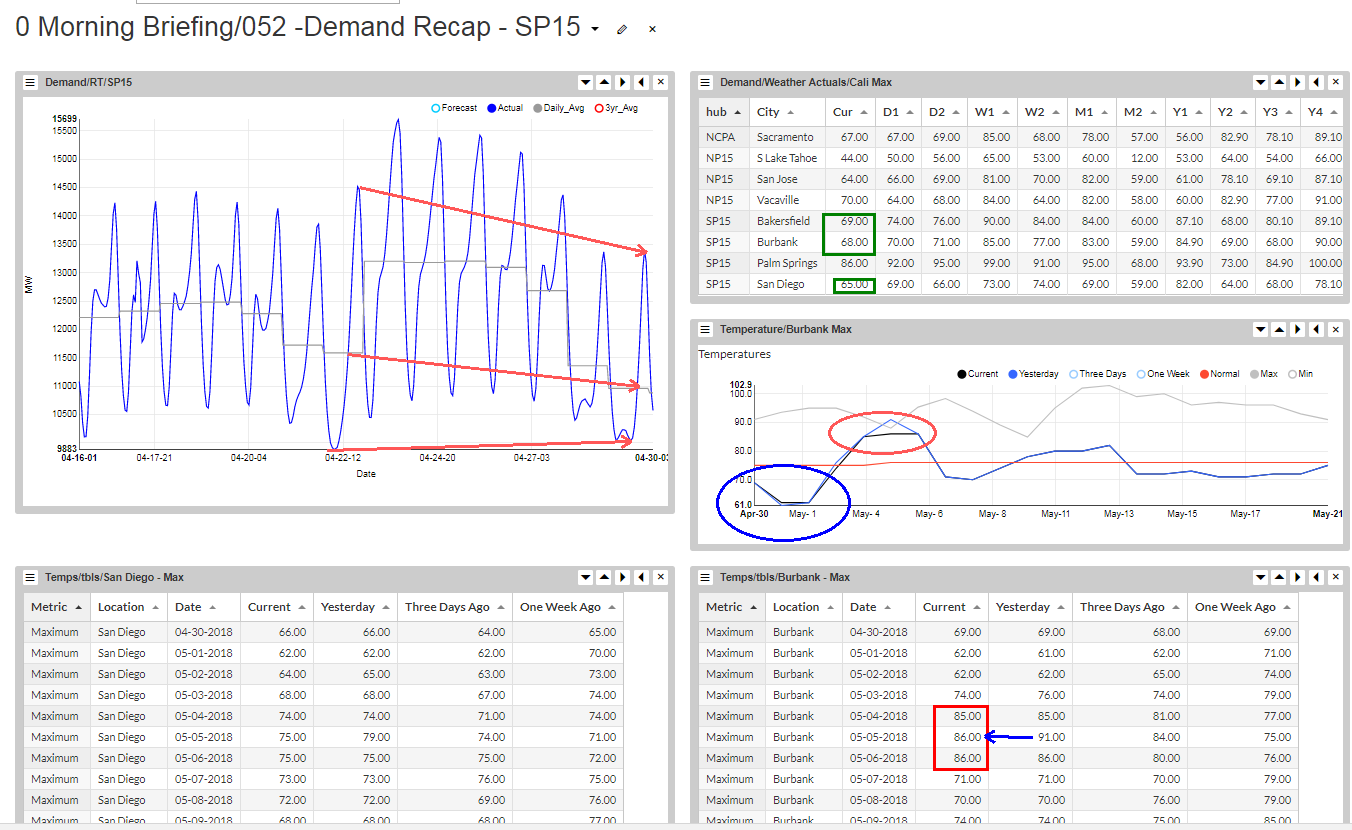 SP’s loads are off, week-on-week, and will stay down for a couple of days, until Wed or Thursday. The rally that follows is weak; the heat doesn’t spill into the LA Basin, onshore flows preclude that. 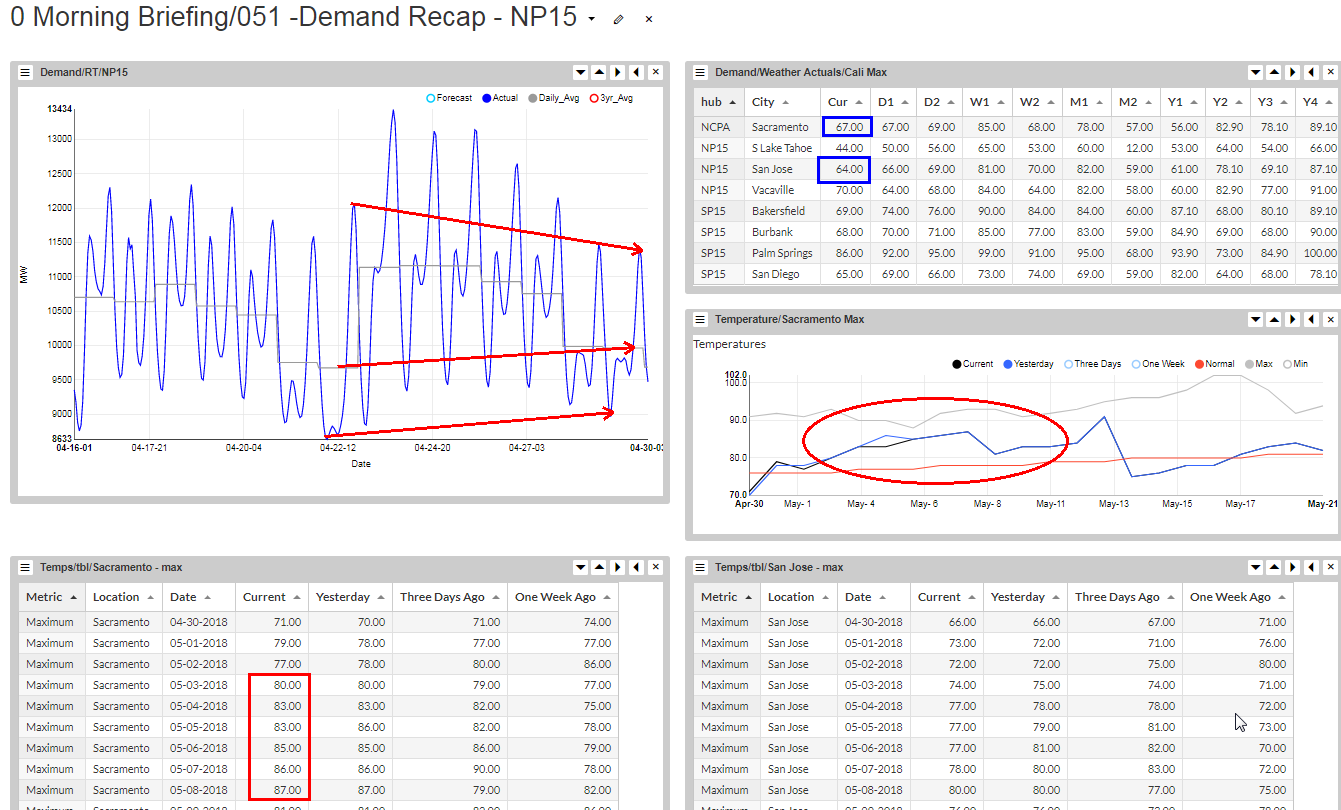 NP’s loads are off, too, but the northern portion of the state gets warmer than the south and stays hot longer. 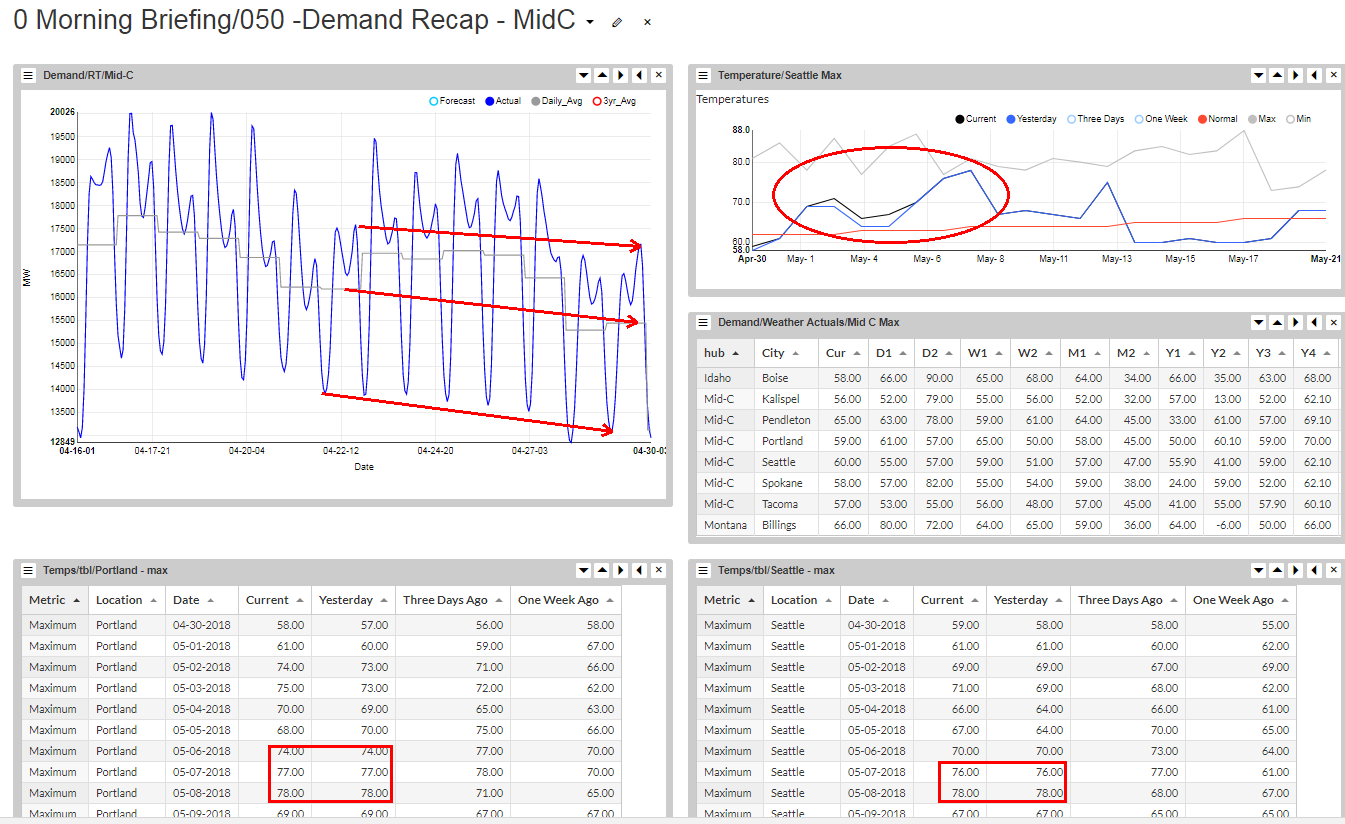 Broken record, Mid-C’s loads, are off. Seattle approaches record heat, but that is more bearish than bullish in May. Both because not warm enough to fire up the ACs and warm enough to melt the snow. Speaking of melting snow, check out these Spokane temps:

Nary a day drops below freezing, and a new heat wave delivers some startling mid-80s. Similar story in western Montana:

Contrast the forecasts from a week ago versus the current – up over ten degrees. The snow is going to fly off the hills, rivers are going to surge, and prices are going to ….. Timberrrrrr …. crash, not that they are very high now, but this month, May, will be an interesting test of how low daily MidC can trade. More on that when we do our market piece. 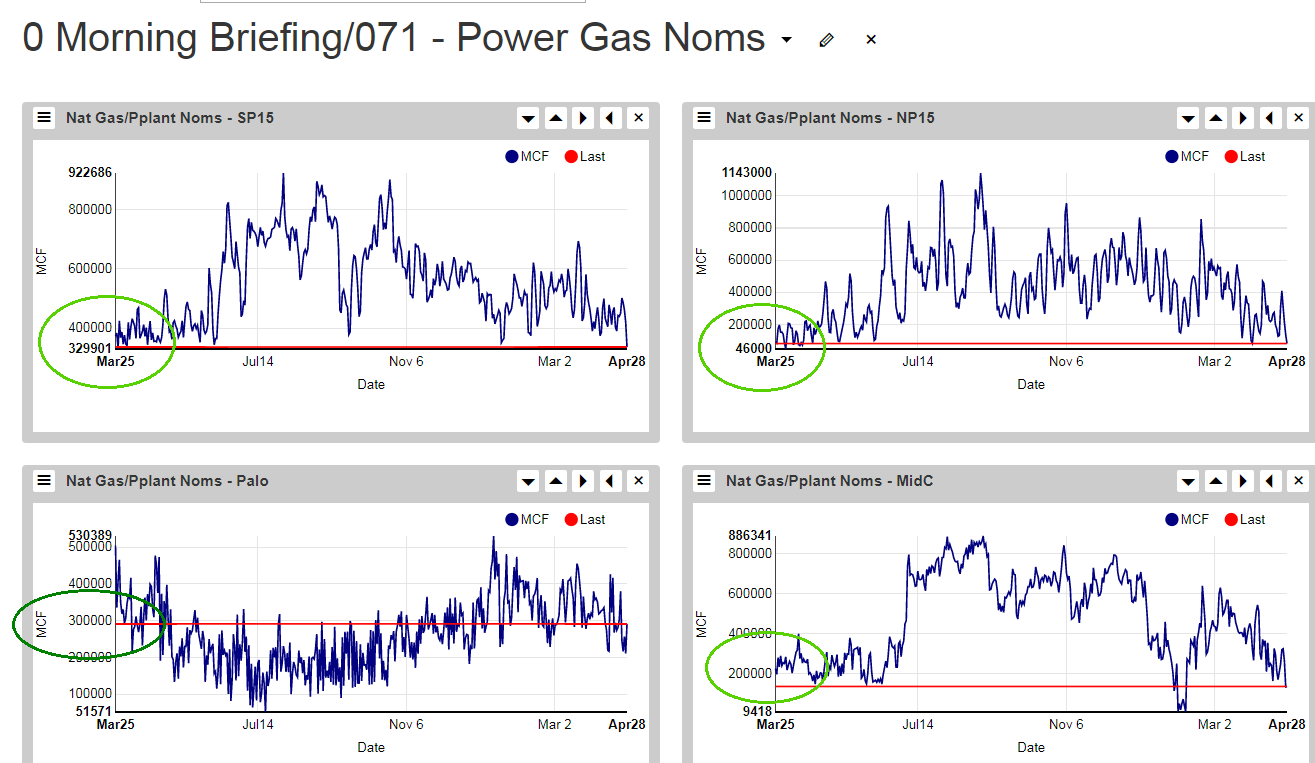 This is interesting, gas noms are at, or near, a calendar low in three of the four hubs; only Palo defies that trend. This is probably the bottom for WECC gas noms. 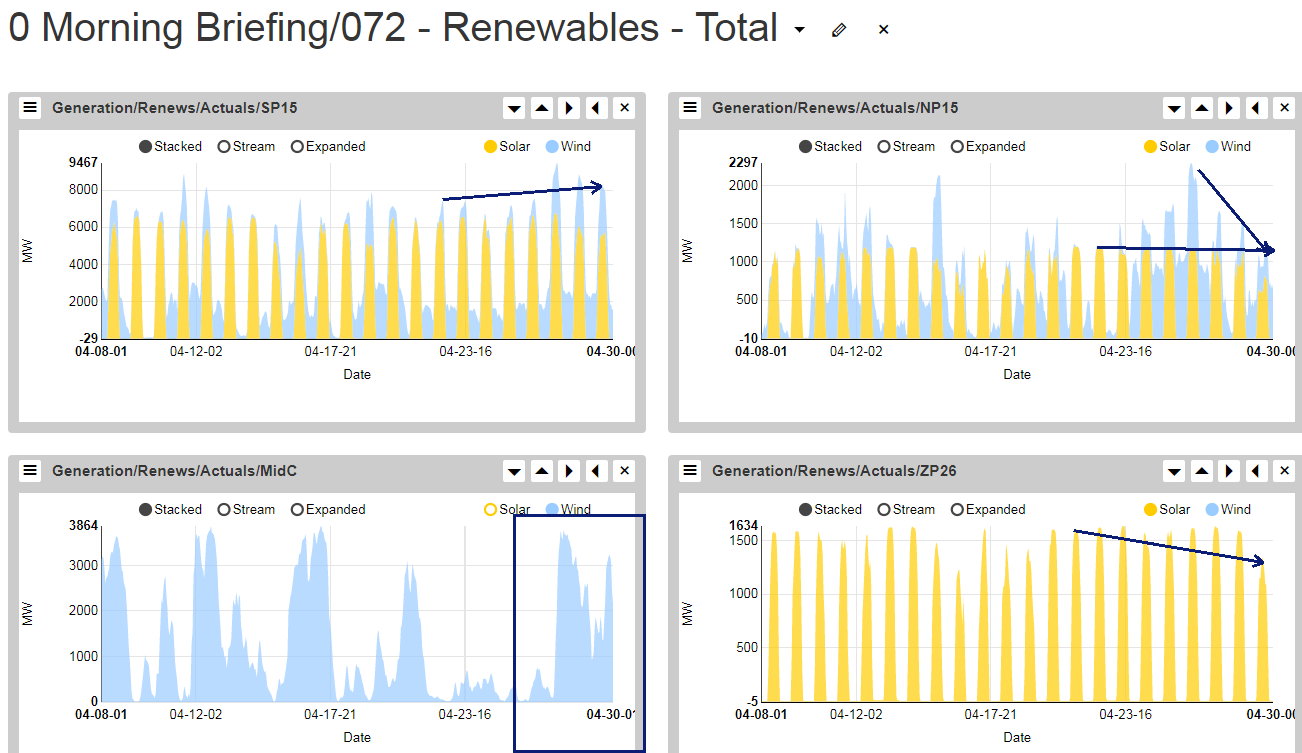 Renewables didn’t help over the weekend, it blew, which blew if you were long. 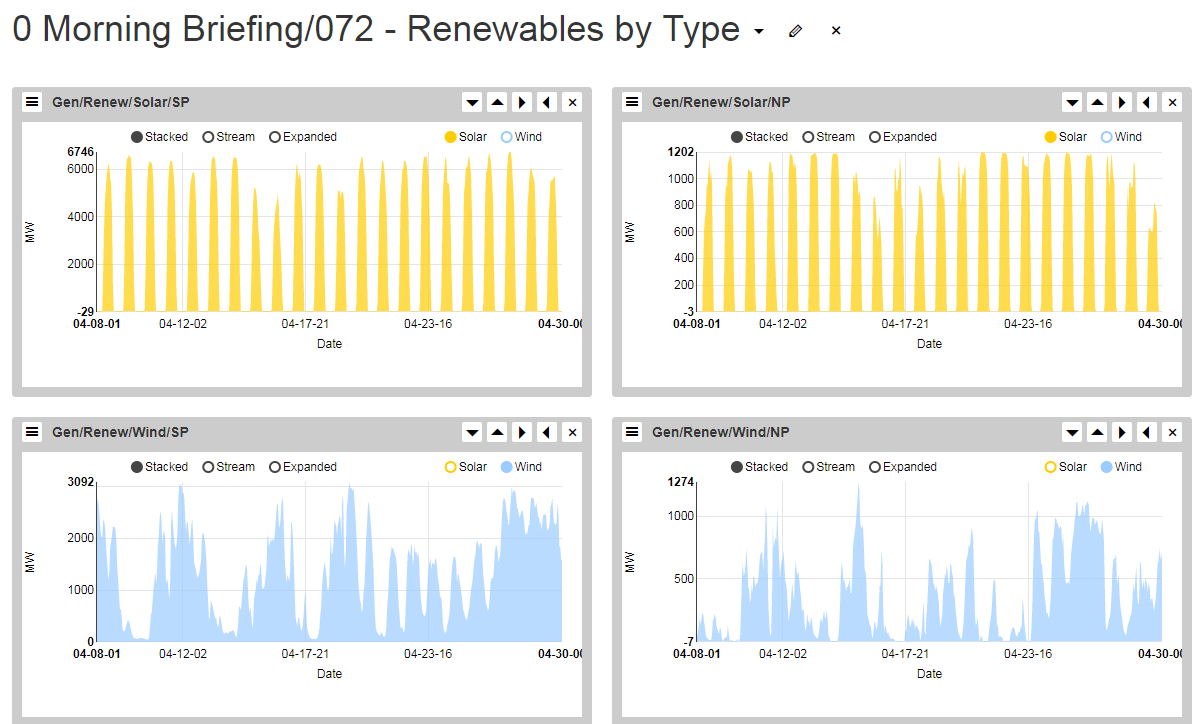 SP15 may have its most significant wind day of the year, yesterday. 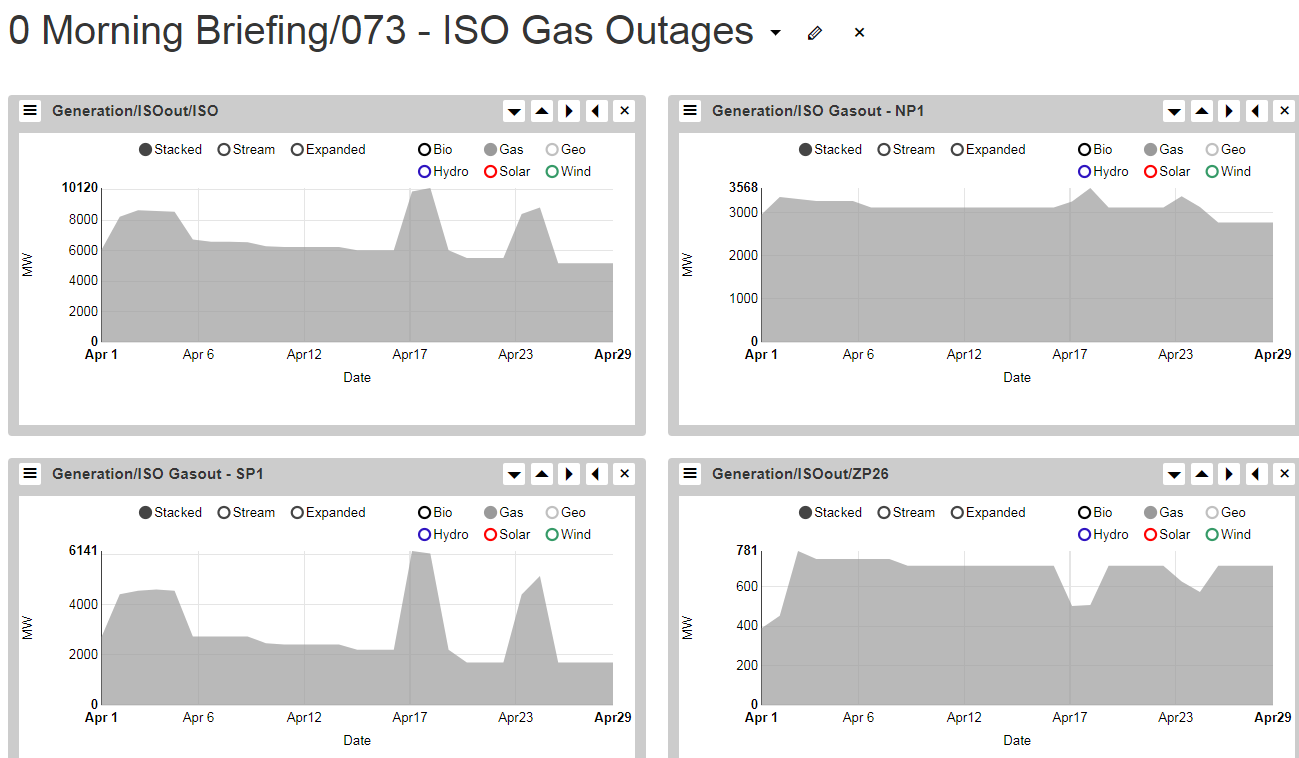 Not much happening with gas outages, not new trips.

Griffith hit a high for 2018, but still cycles. New Harquallah remains offline; perhaps she comes on when temps hit 105? 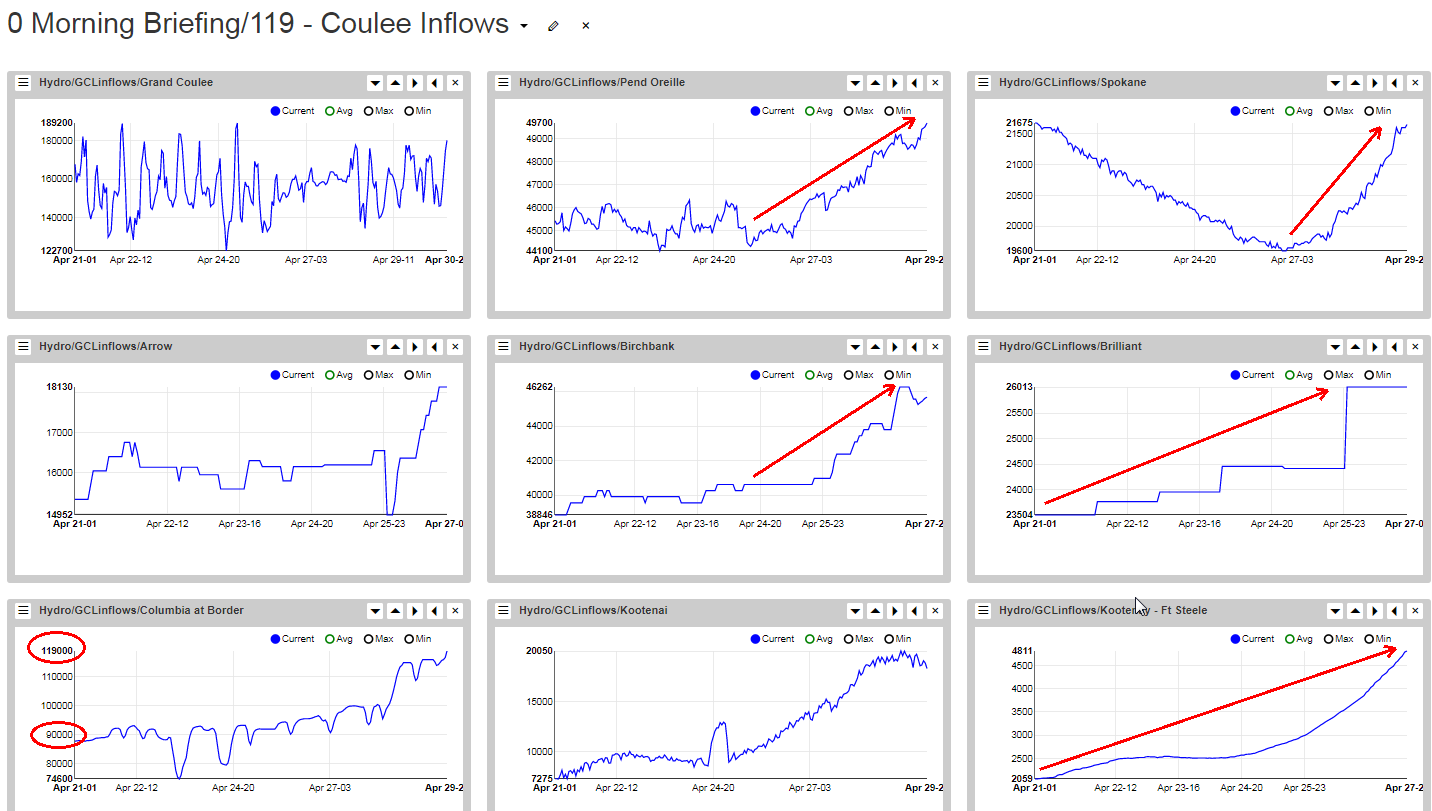 This collection of plots are stations above Coulee; the idea is to get a sense of GCL’s inflows. Tomorrow, BPA can begin refilling the project and has 68 feet to go.  June’s fate may well be set by how fast the pond is filled; if filled too quickly, June will be a trainwreck; if BPA lets some of this early May water pass, then there may be a prayer of hope for June. Meanwhile, the inflows are ramping up and will continue so for the next N days, given the heat.

One of our Sideflow Indexes, the Mid-Columbia, is approaching a ten-year high. This index aggregates side flows from Chief Joseph to Priest Rapids and has more than doubled in a week. This water is 100% unregulated as it enters the mainstem Columbia beneath the storage projects. Typically, this water will just be spilled.

We also are watching the Salmon which is up 2.5X in ten days. There is plenty of snow to drive this river to a record, though the rest of the Snake is weak, snow-wise. 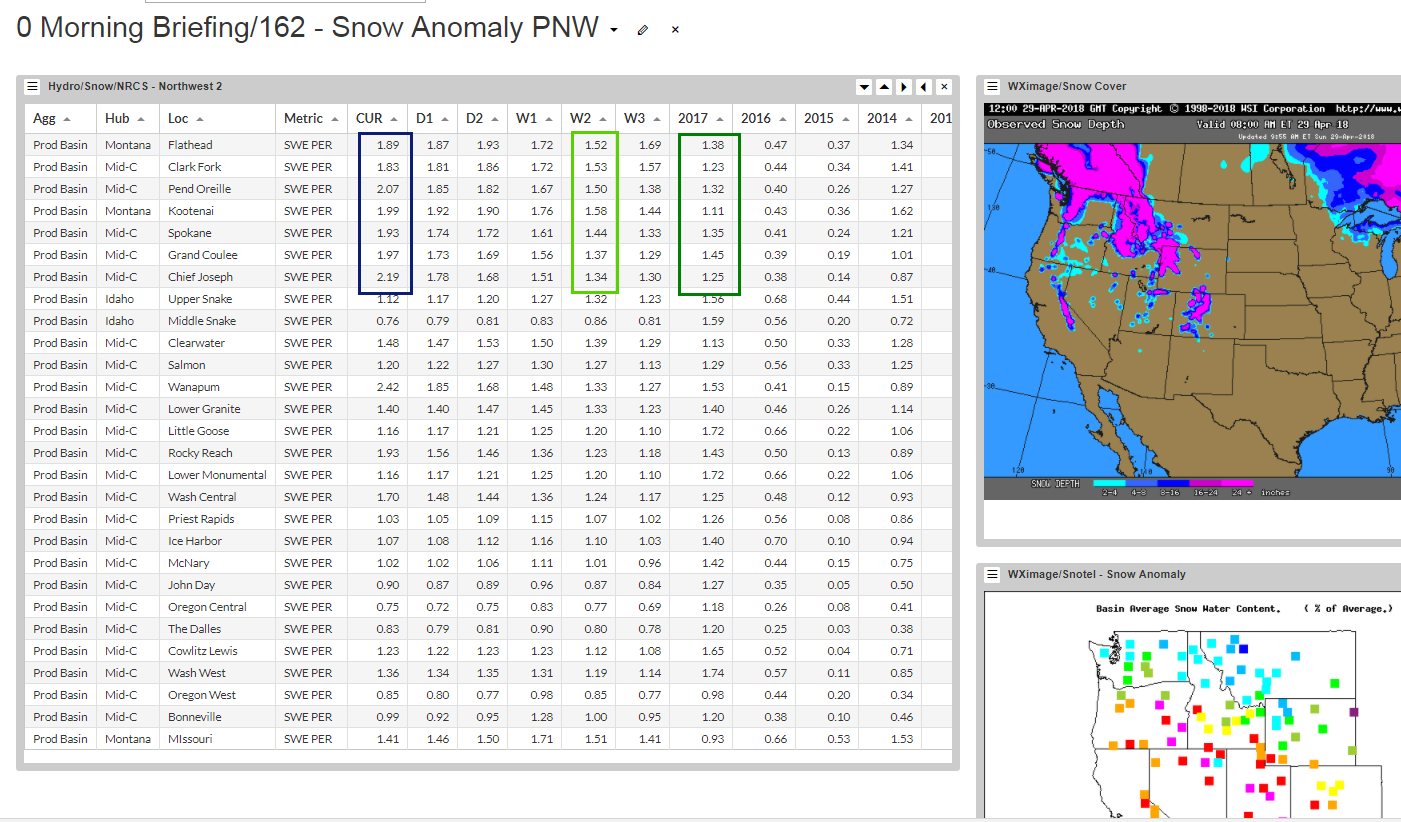 The Salmon is at 120% of normal, as of yesterday, and the Clearwater is even higher at 140%. The Middle Snake is but 76% of normal, though the Upper is above average. Bottom line, the Lower Snake is going to approach 200kcfs inflows in the next ten days, all the while the Middle Columbia projects will be close to the same, putting 400kcfs through the Lower Columbia. How much of that will be spilled to preserve price? We’d guess enough to keep the gas on the margin for all of May, that is what BPA did last spring. 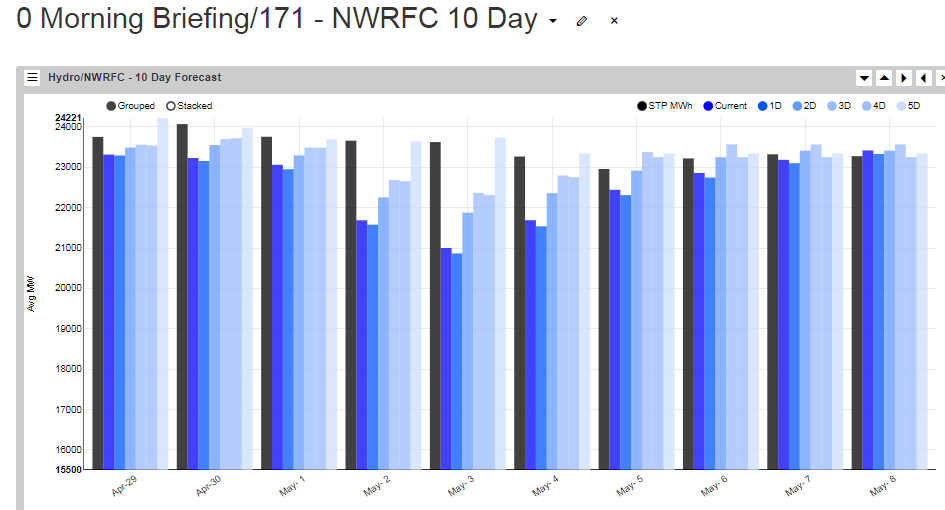 Today is STP and the 10 Day offers little “tells”; though wouldn’t take Einstein to guess that they will jack up May, keep June the same, and cut July and August. 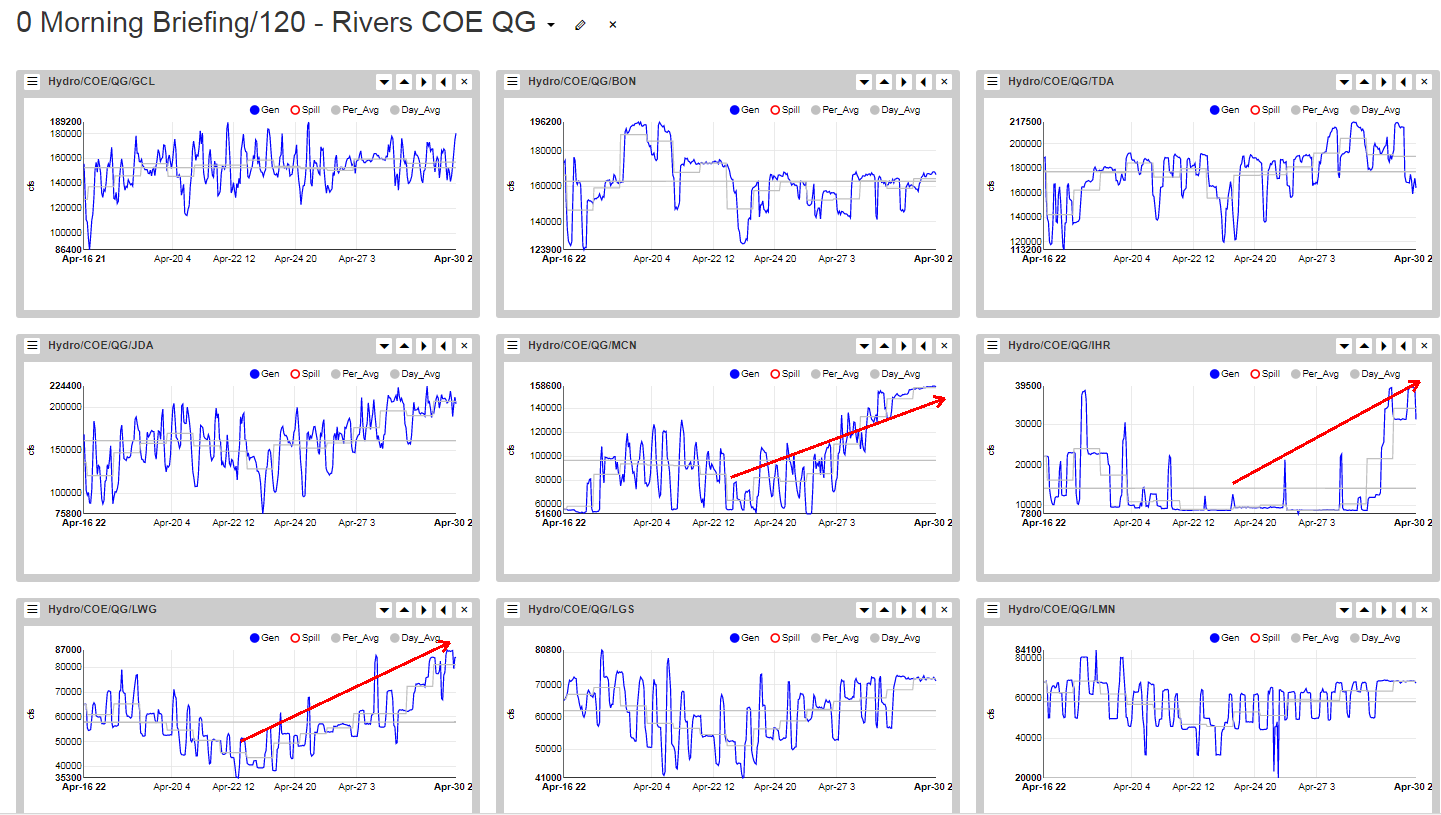 These are plots of water through the turbines (QG), and we see some significant spikes up at a few projects, several are approaching or at hydraulic capacity. 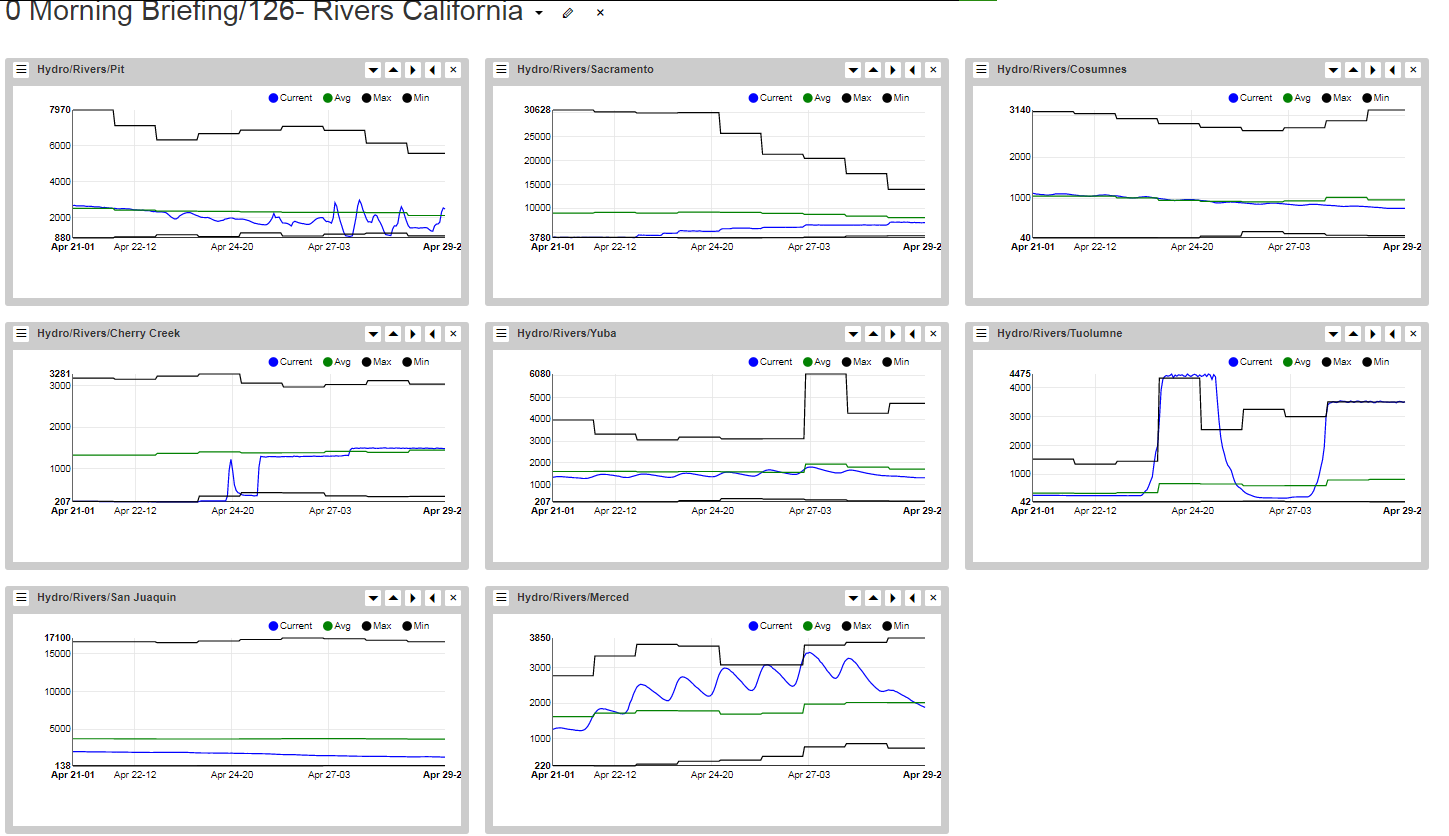 Not seeing much movement on the California streams, a few, like the Merced, are seeing strong flows driven by snowmelt, the rest not so much. Those will rally, it is warming up at Lake Tahoe: 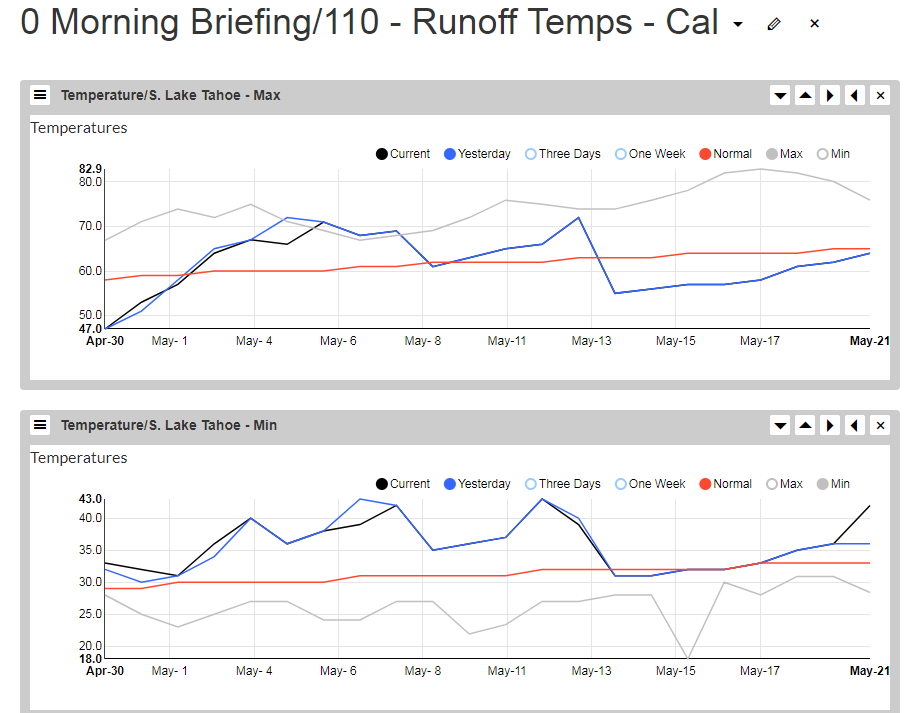 So warm, records may be set for 3-5 straight days, and there is some snow to melt, too:

Not a lot, but enough to add another 1000 aMW of hydro energy for May and June, form today:

Interesting that the peak energy rallied while the average plummetted, suggesting how CDEC is shaping its water. 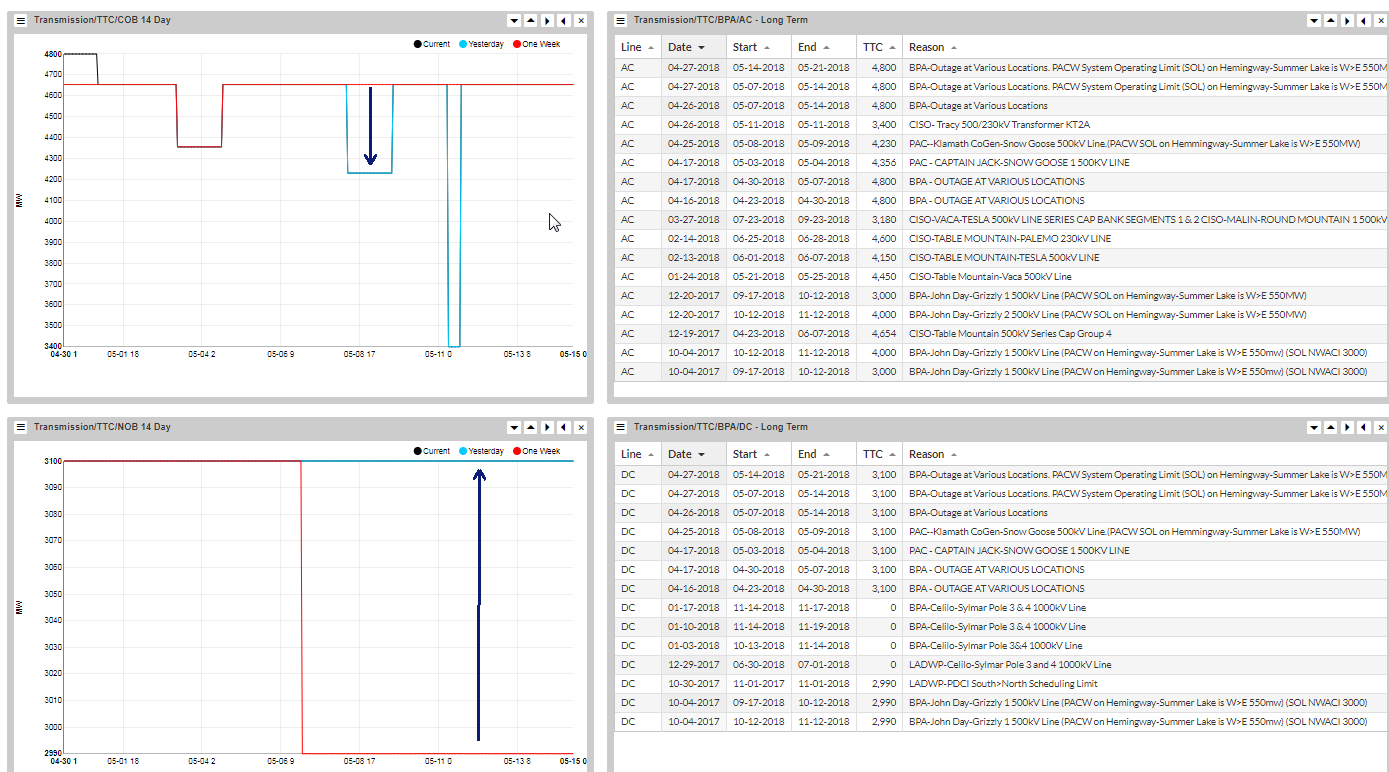 All lines into CA from the Northwest are near peak TTC, just in time for the big melt.

BC remains an importer of Northwest energy, averaging nearly 1000aMW per hour; what happens if they quit buying? The Northwest is keeping the AC and DC lines full at all hours – except solar. Will they fill those hours too when Coulee sees 240kcfs inflows? The ISO feels weak to me.

Aside from Palo, the rest of the WECC is best enjoyed from the short-side of life. The runoff has commenced and it won’t stop now, not until the snow is gone, which we’d guess will be sometime in mid to late July. The ISO won’t see a reprieve until LA heats up, and we see no signs of that in the next two weeks.