Today I am using APT-Beta for the first time. Though the report is still in beta, it will be coming out of beta shortly, maybe this week. We are re-running some history, but the core logic won’t change. There are many tweaks; I’ll share all once I release from beta.

You can find the new APT here.

You can find the new charts here. 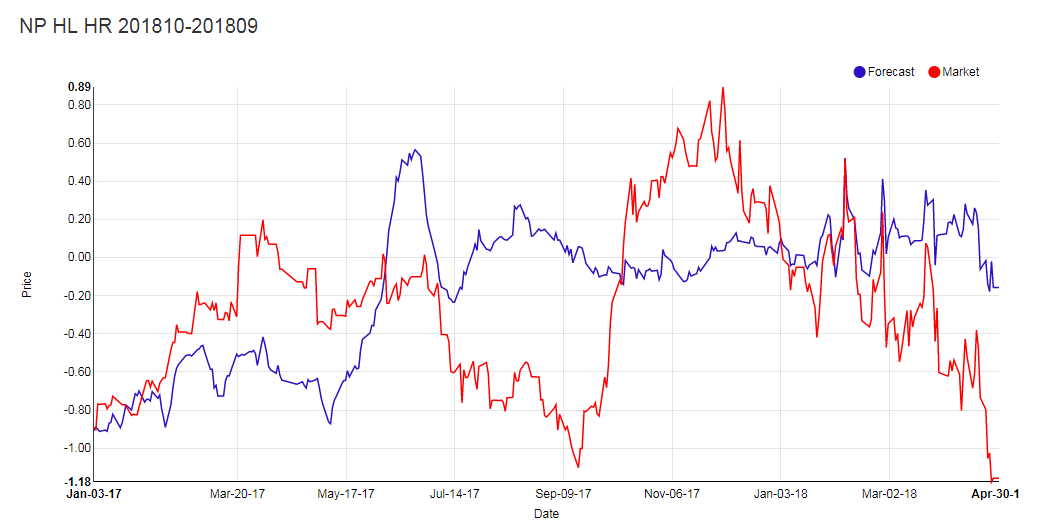 The Oct-Sep NP HL roll hits a contract low on Friday which begs the question “WHY???” It isn’t water, the WY18 runoff will be over in June, and it isn’t new data on that water year either, we’ve known what we know today for the last two months. Given the late summer heat in the ISO, this might be an excellent buy today. 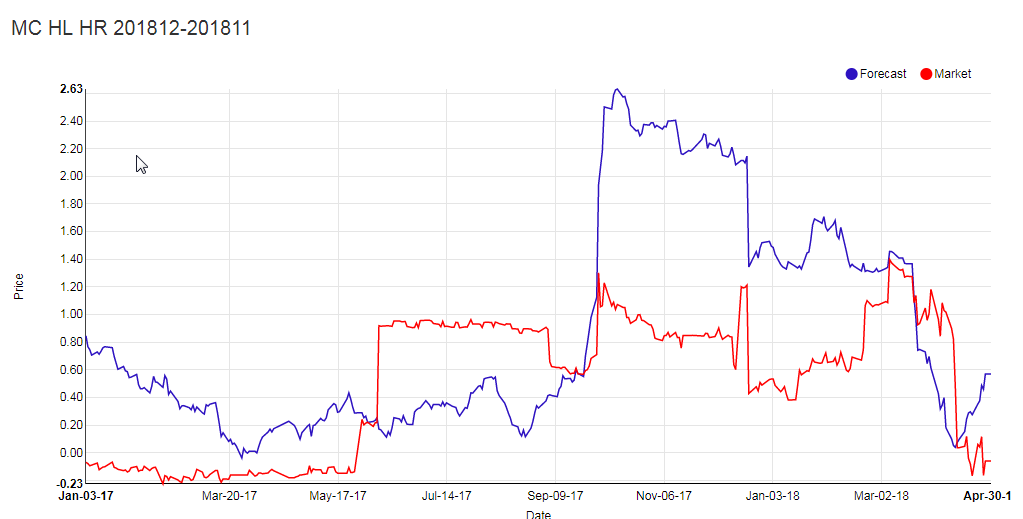 More cheapness, the Dec-Nov MidC HL. Can’t give you an explanation why the Dec is trading at a discount to Nov. I can give you a few reasons why it should trade premium: 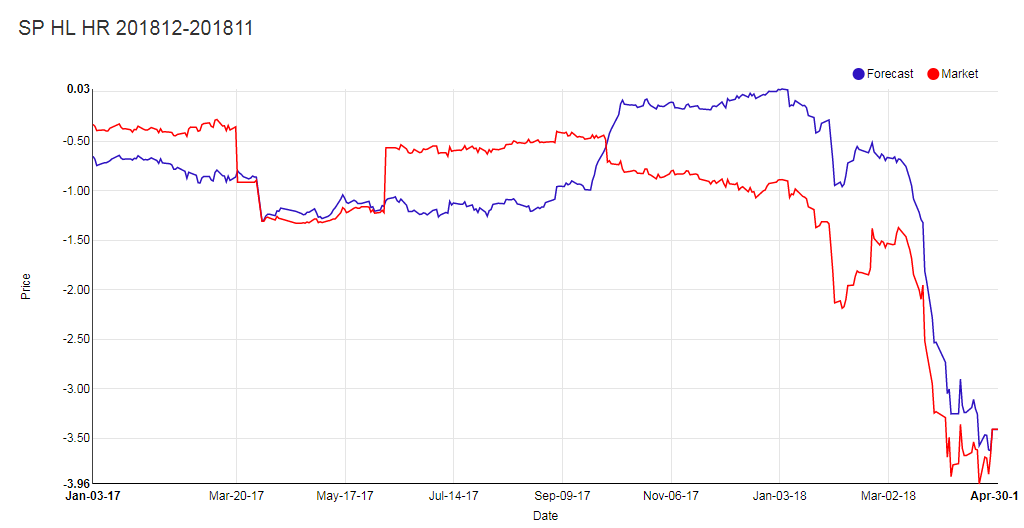 Same trade, except at SP15, and same conclusions. This is driven off of gas:

The Dec is the new rocket-man, the Nov was left in the dust, but the power price didn’t move as fast. Hence the heat rate tanked. What that is saying is that Dec SP15 imports will soar because gas will be too expensive to burn in the turbines. But what if the outside hubs are tight and SP has to use its own turbines – at these gas prices the power price will rocket, and this roll will look crazy cheap. 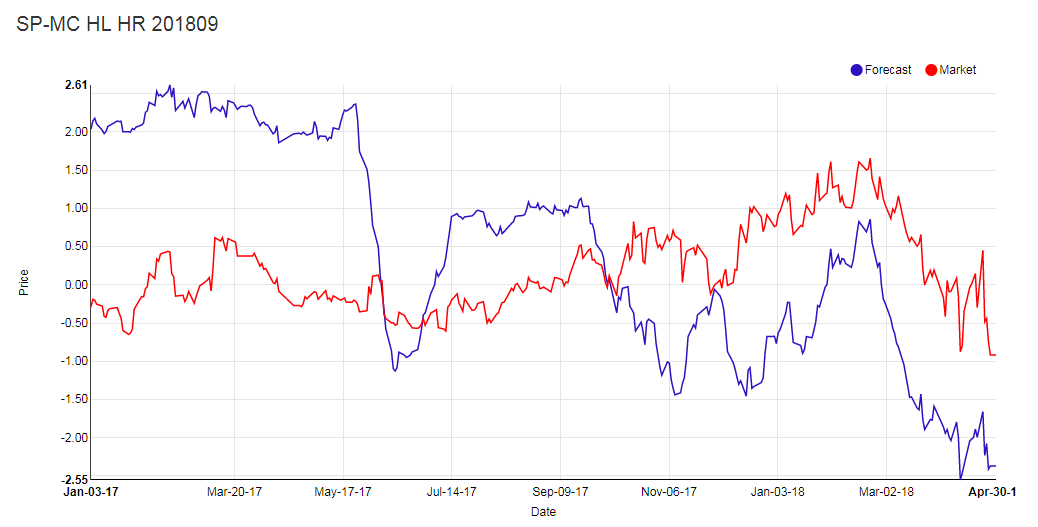 The Spread – SP-MidC, for Sep HL, is now on the cheap side which we find surprising given that the MidC has a near-record water year. Sure, we get that not much of runoff water makes it into Sep, but its the pounding of cash before then that should put downward pressure on Sep and make this spread blow out. We think this is a cheap way to own some SP and would be a buyer.

This is quite odd; the PV-MidC Oct HL spread; the market has completely melted down and rendered this a compelling buy.

Ignore the forecast, that is why we are re-running history but look at the recent market move, running sharply up.  This isn’t gas, both Aug and July SCG are up dramatically, Aug is trading about $0.20 higher than July. We’d be inclined to sell this. 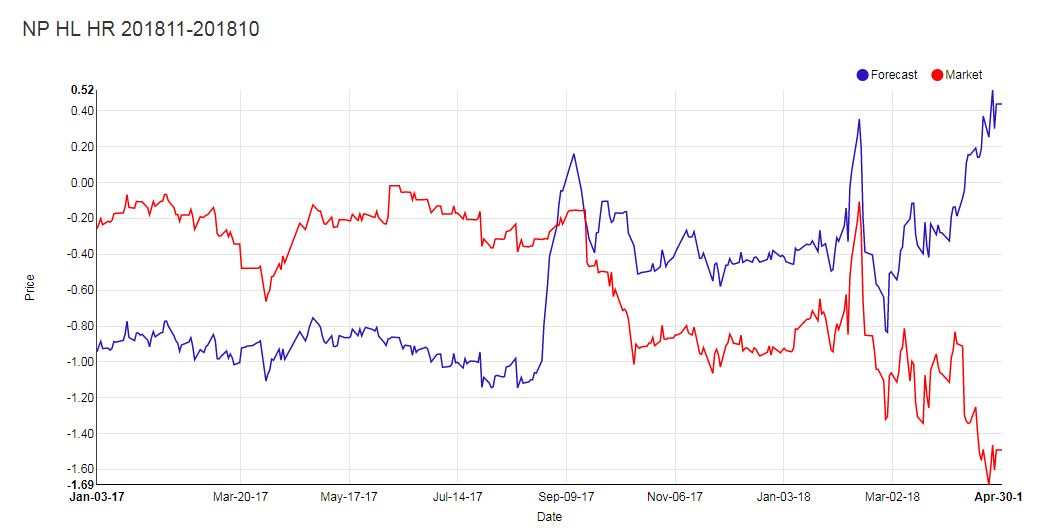 The NP HL Nov-Oct roll has found a bottom and bounced up a touch and is a good entry point to buy this roll, only because it is cheap.

This is rich, the Dec NP-MC HL, too much so in our opinion. WY18 will have zero impact on Dec MidC, so at best we have to assume normal water. We also know that PG&E Citygate will not trade in sympathy with Socal issues, so all of this premium is power-driven, without a fundamental basis. Sold. 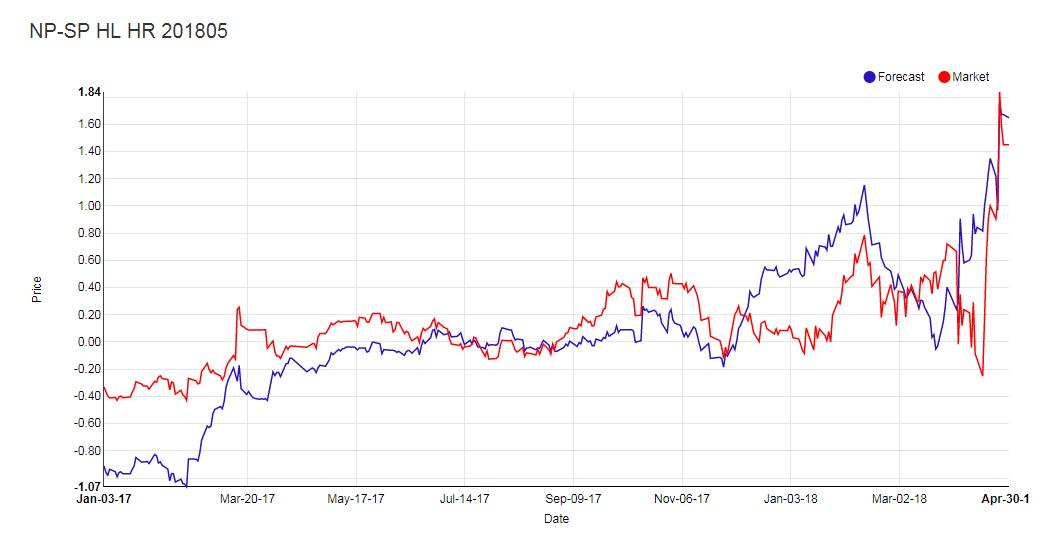 Whoa, talk about volatility. The NP-SP May (now BOM) has rallied 2k btus in a few weeks. Keep in mind the Cal runoff hasn’t started, when it does it affects NP more than SP. 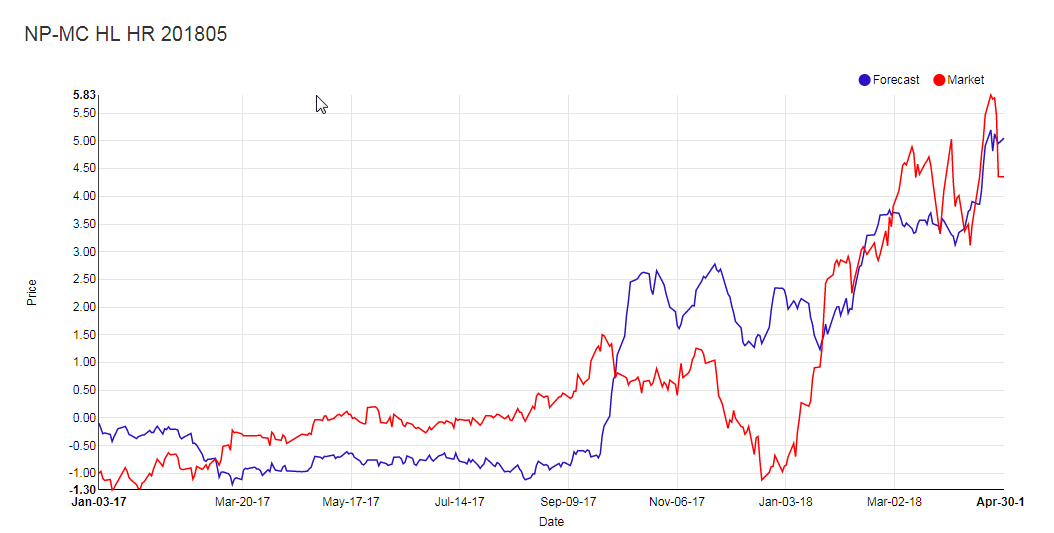 The May  NP-Midc spread, unlike the NP-SP, has come off the last couple of days. Still, the price is rich, but we’d buy it. MidC is still about a week from seeing that wall of water slam into Coulee, and her downstream wards; plus NP has some heat coming.

Because it is the runoff and the MidC becomes the most volatile hub on planet earth, we post our thoughts on its HL front twice a week. 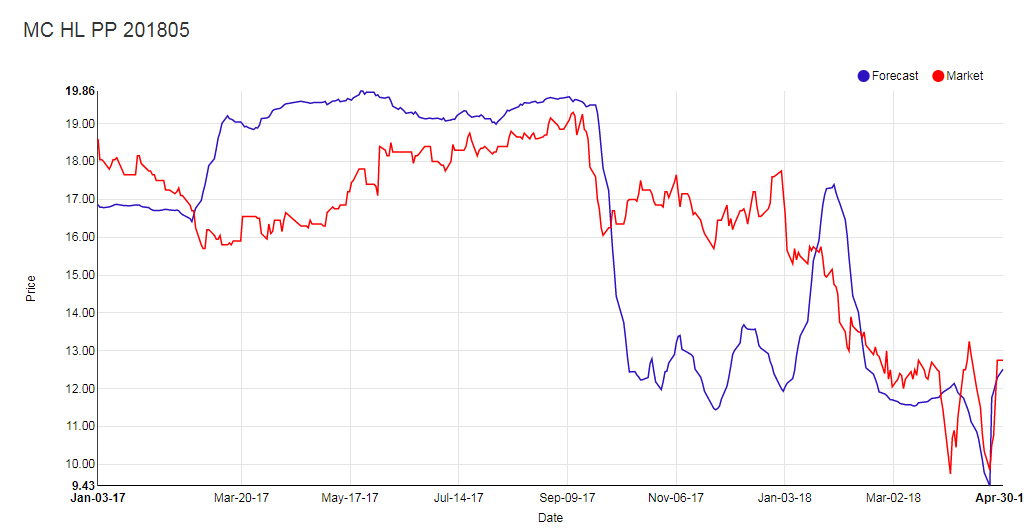 A rally, yours. Will take another week for this latest heat to show up as inflows, but those are coming, and they will keep on building. Had the Northwest reverted to cold we’d be inclined to agree with the market, but that didn’t happen, it grew warmer. The 80s in Kalispell mark the kiss of death for the hub, those come later in the week. We’d sell into this rally. 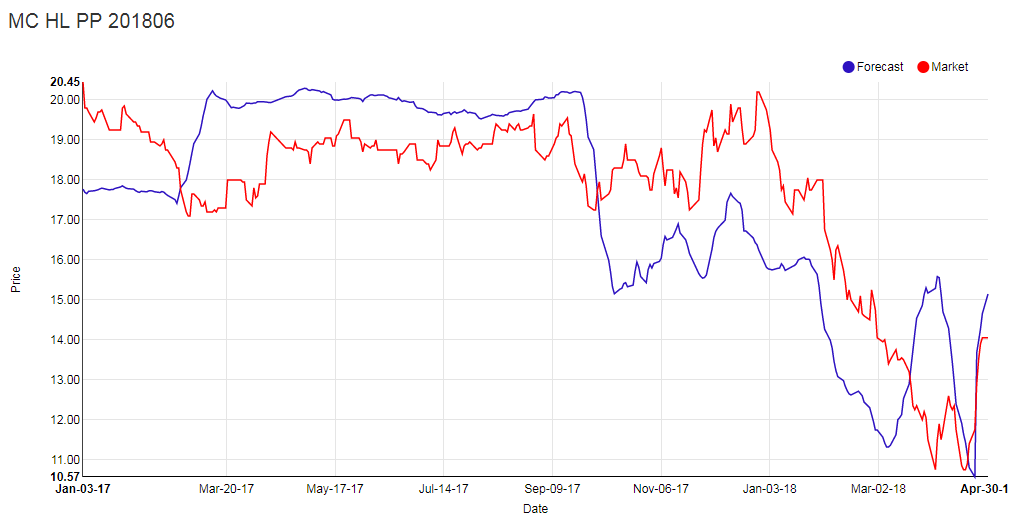 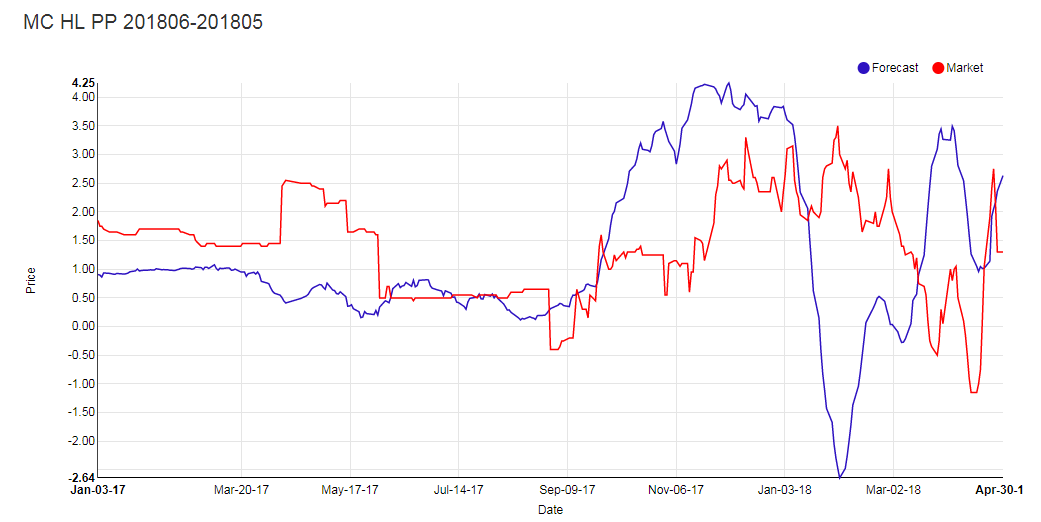 We’d not waste our time with the roll; we’re short both. 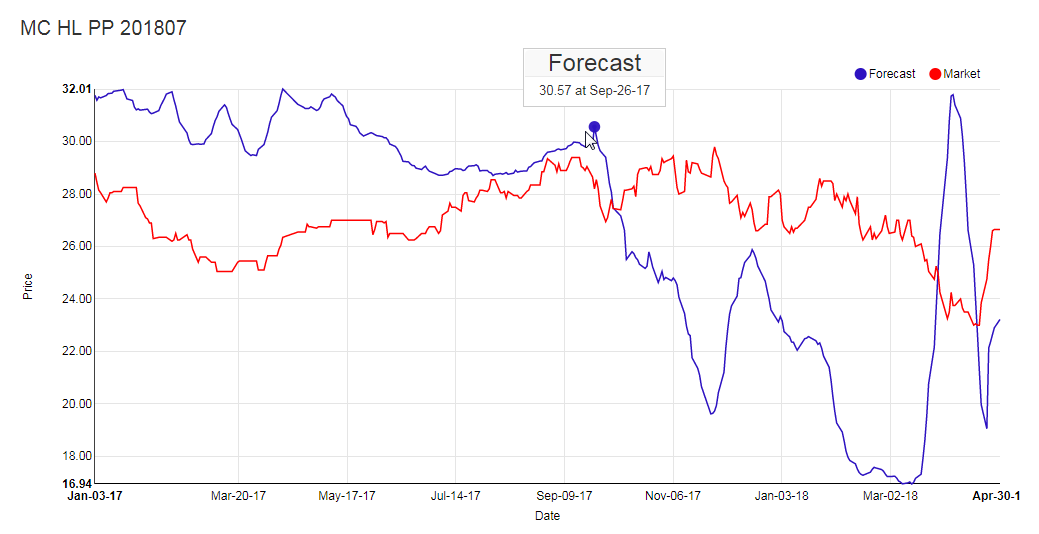 July might be the best month to trade given that its water outlook will be impacted by changes in May temperatures. The market rallied, it should have, but did it rally too much? Doubt it, but we’d want to see another $1-2, then we’d short it again. 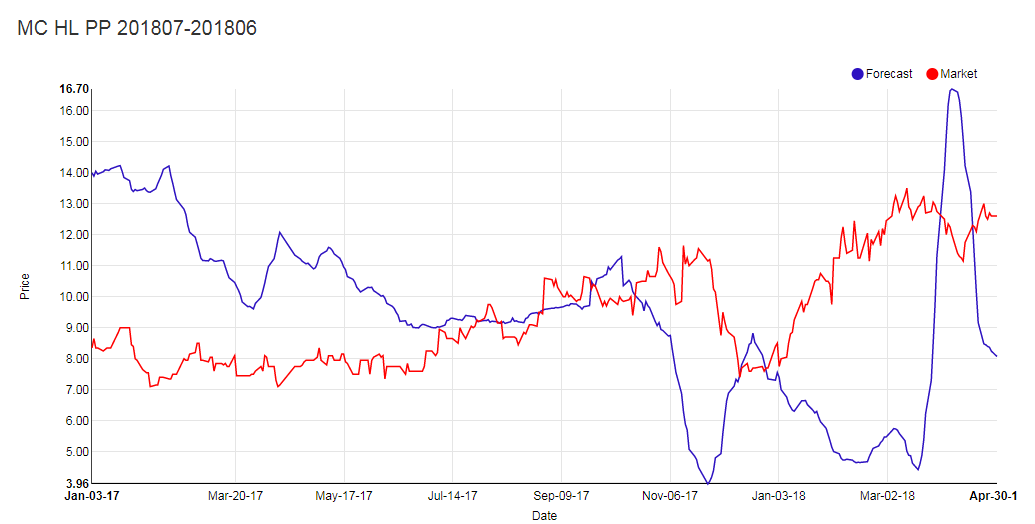 Like the other roll, we’ll pass. This is probably more reasonably priced than not; we’d instead jump in on extremes, not seeing that today. 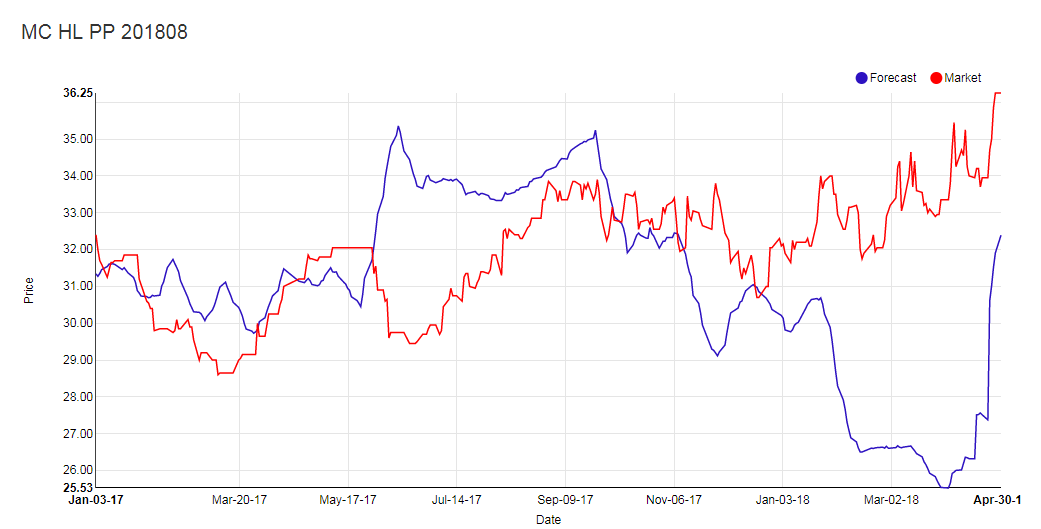 This one I agree, August has grown more bullish on these positive May anomalies. 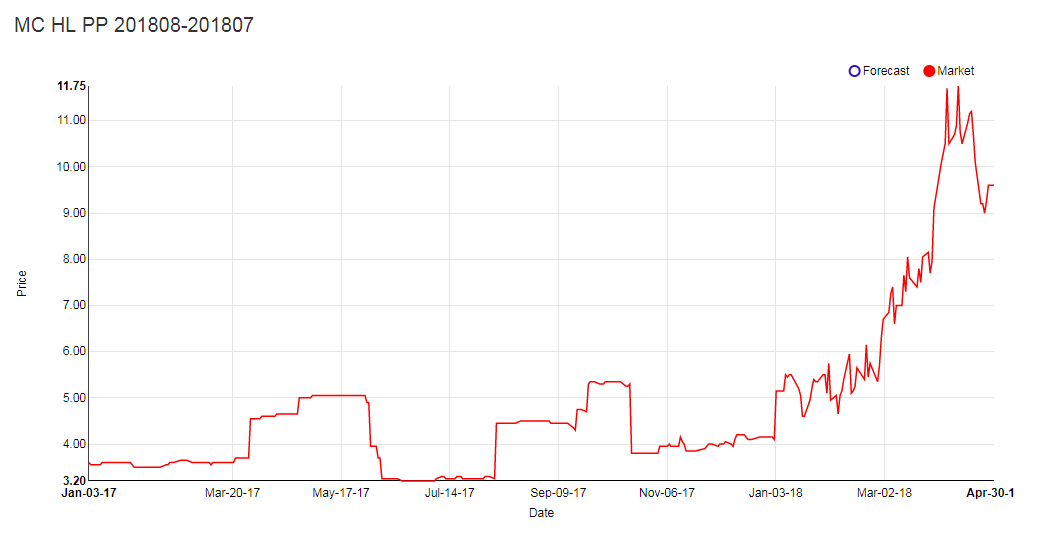 The roll cratered, the assumption being that July’s runoff stops around mid-month. I’d bet there are strong inflows through all of July given the level of today’s snow and would buy the roll. 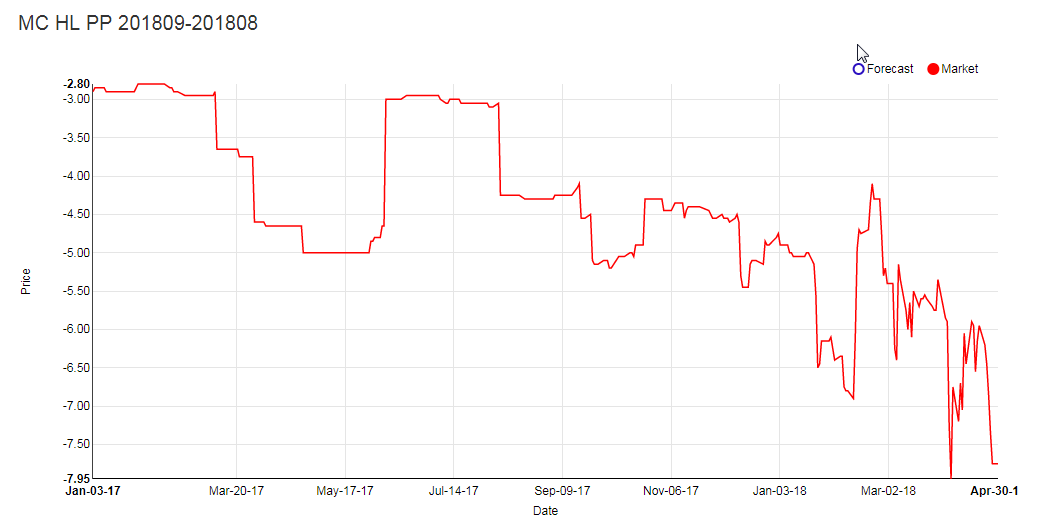 This is cheap, maybe too much. If things cool off in the Northwest, then August starts looking vulnerable. Given what I know today, I’d own Sep +$7.50 over Aug.