The big Northwest heat wanes quickly, but followed by another round, though the “surge” of flows has not arrived, maybe this weekend. The ISO saw a surge in demand, but not in LMP DA prices. 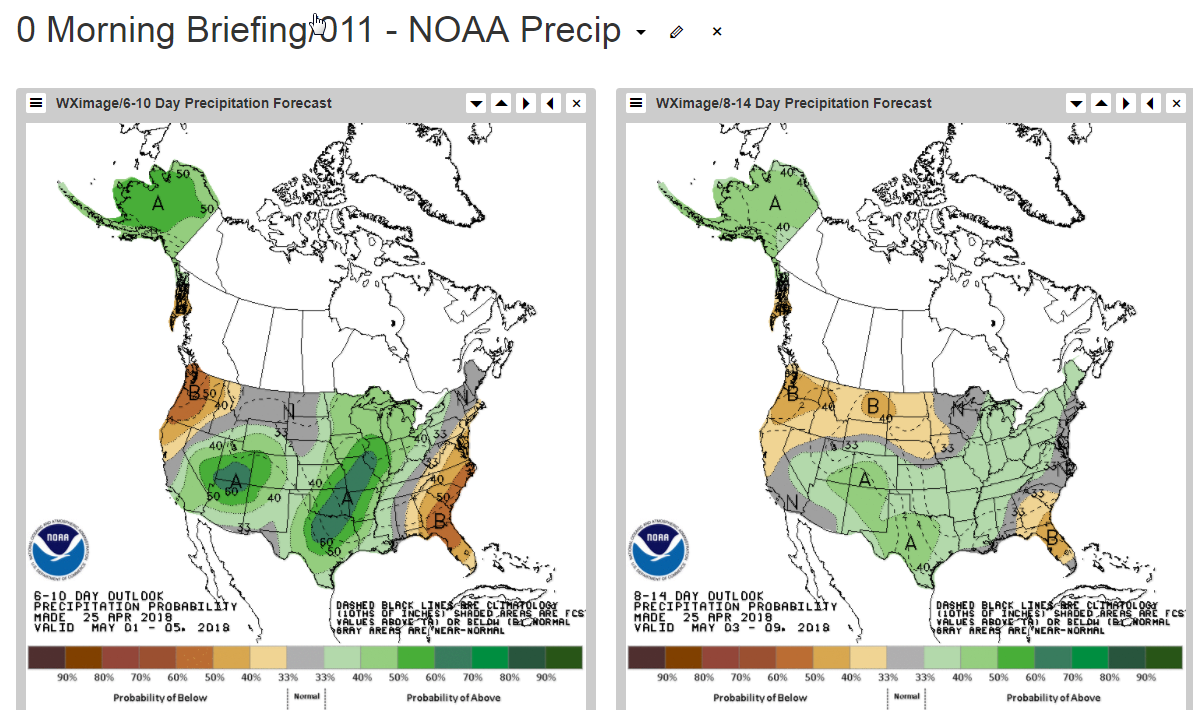 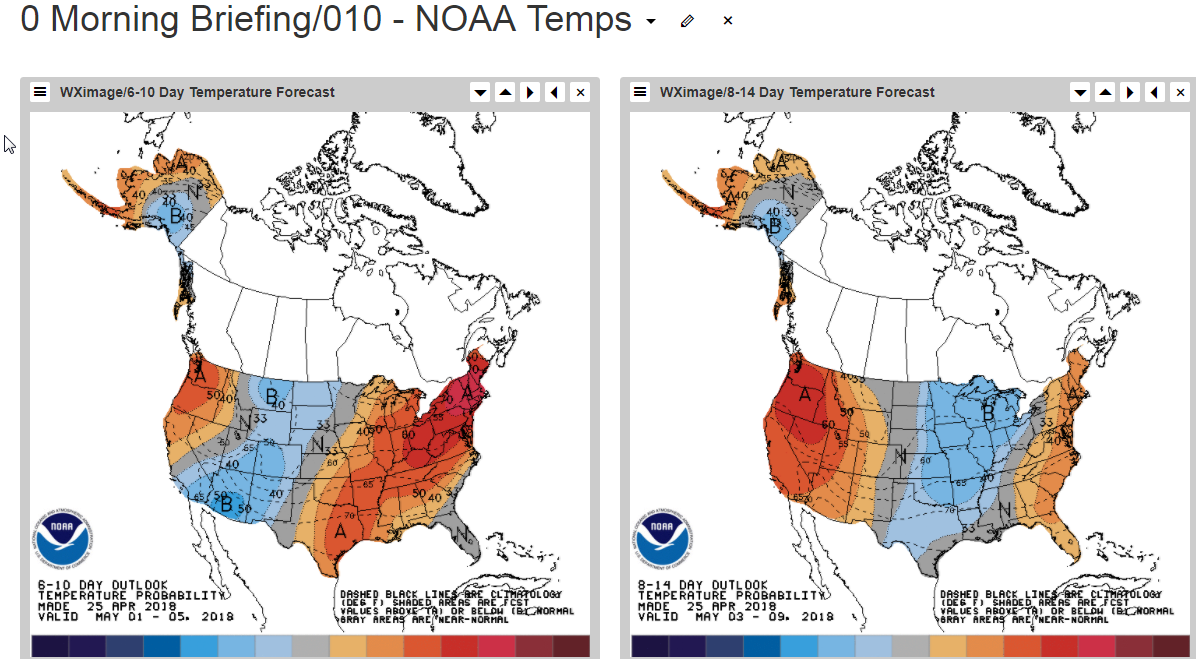 Most of the WECC is dry, and by next week, warm to even hot.

LMP prices are sideways, not enough demand to drive them higher. 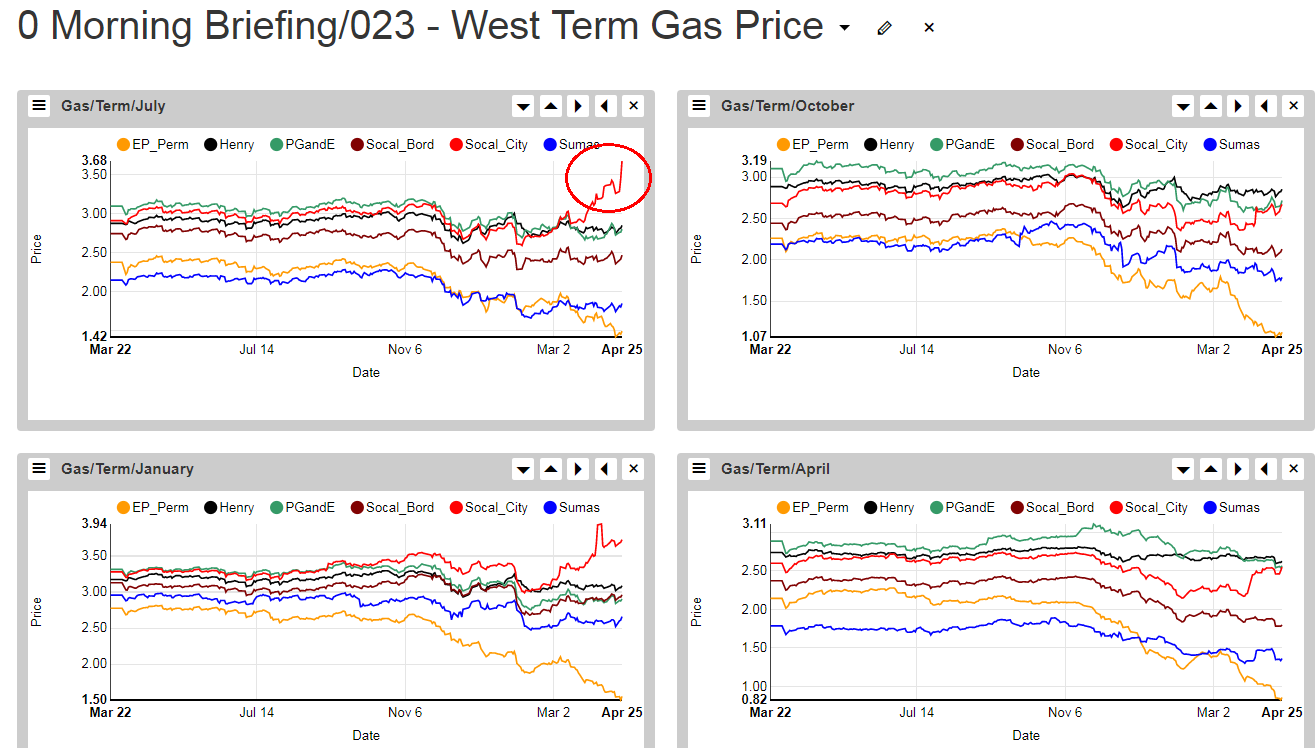 Just when we thought the Socal Citygate flareups were sidelined, at least until next winter, the July gaps up. Go figure and have no explanation for this. There is little demand, strong flows, and the ute is injecting gas – so why would July gap? 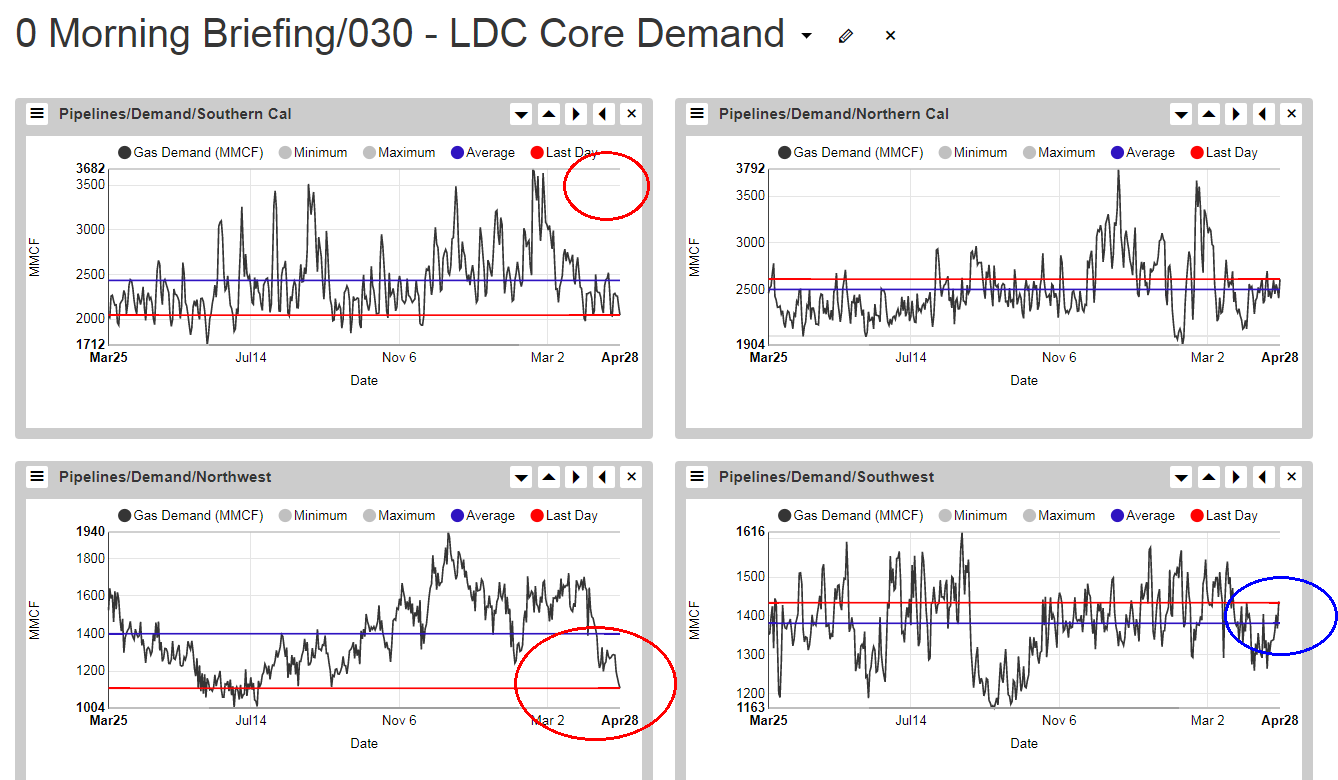 Speaking of gapping, check out the Northwest’s Core gas demand, it is gapping down off of the warm weather and no power loads; soon it will gap further once the wall of water slams the river system. 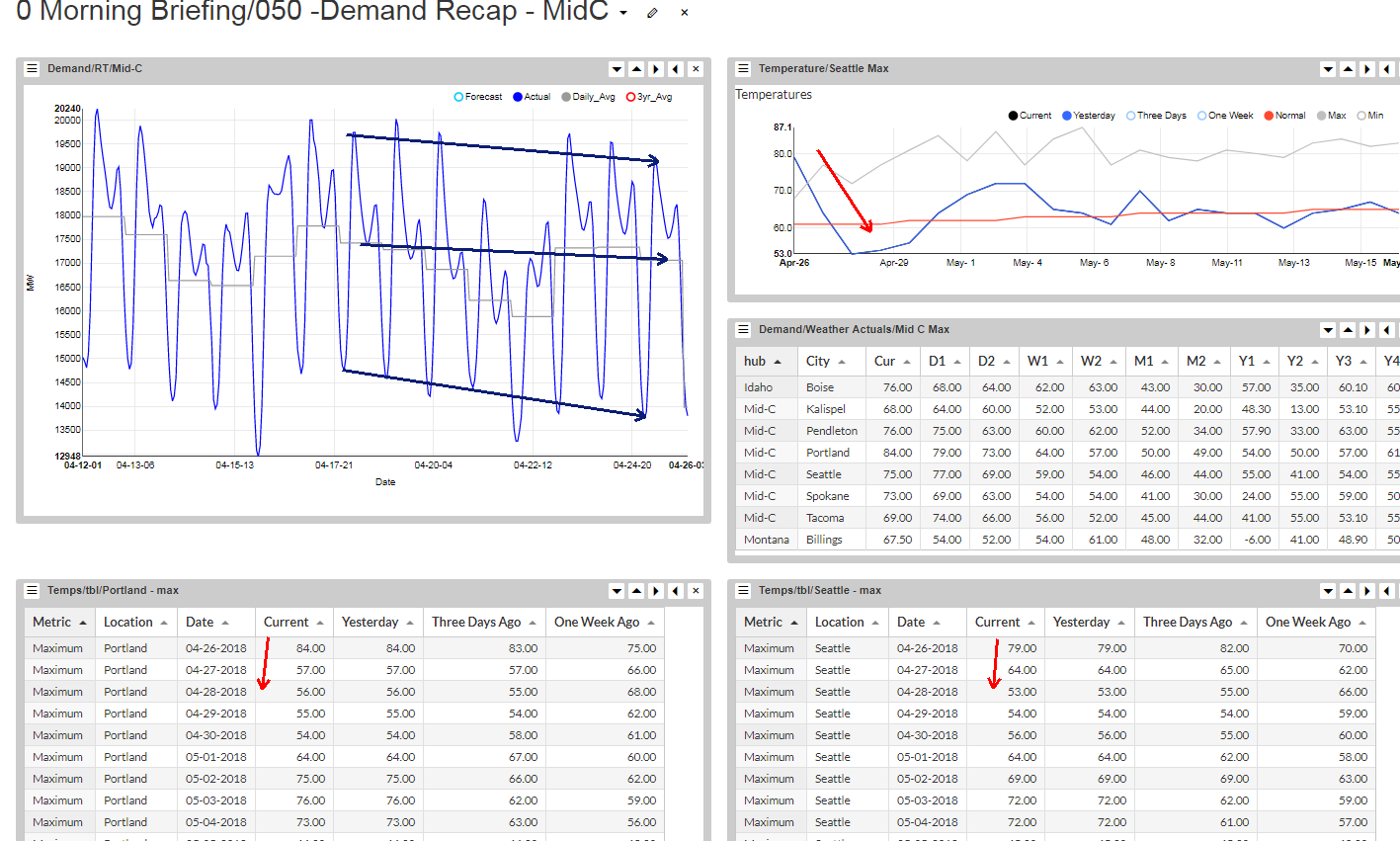 Like its gas demand, power demand drifted lower, though it should see a rally off of plunging temperatures. That cold snap is short-lived, next week things warm up again. 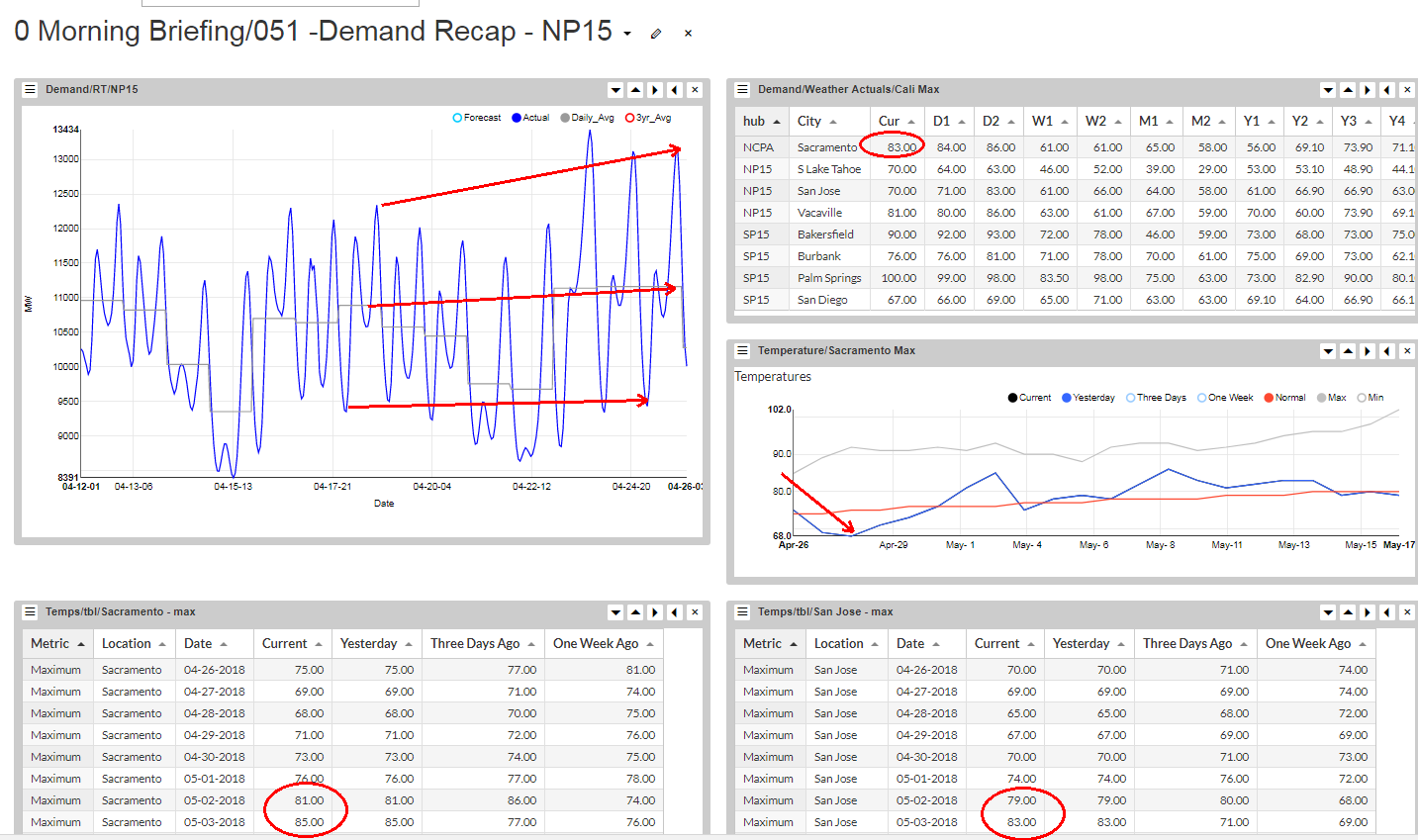 No demand crash at NP, that hub’s loads soared on warm weather, but alas, it cools off over the weekend and then is staged for another rally. 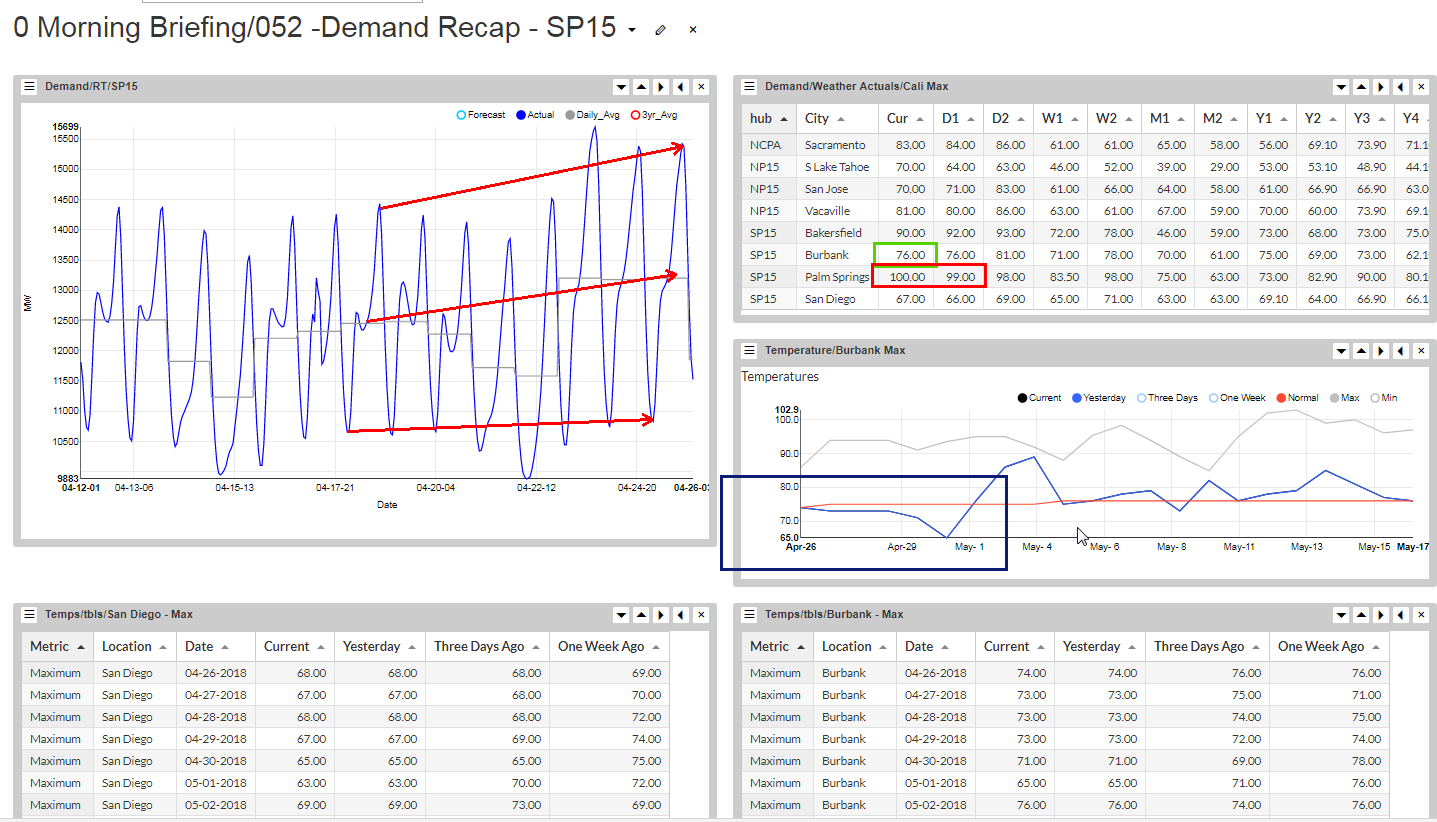 Even SP saw a load rally, but hard to understand how, given that Burbank boasted barely mid-70s. Palm Springs, however, hit the first triple digit of the season, amazing that you can have that much temperature variation in just 75 miles. 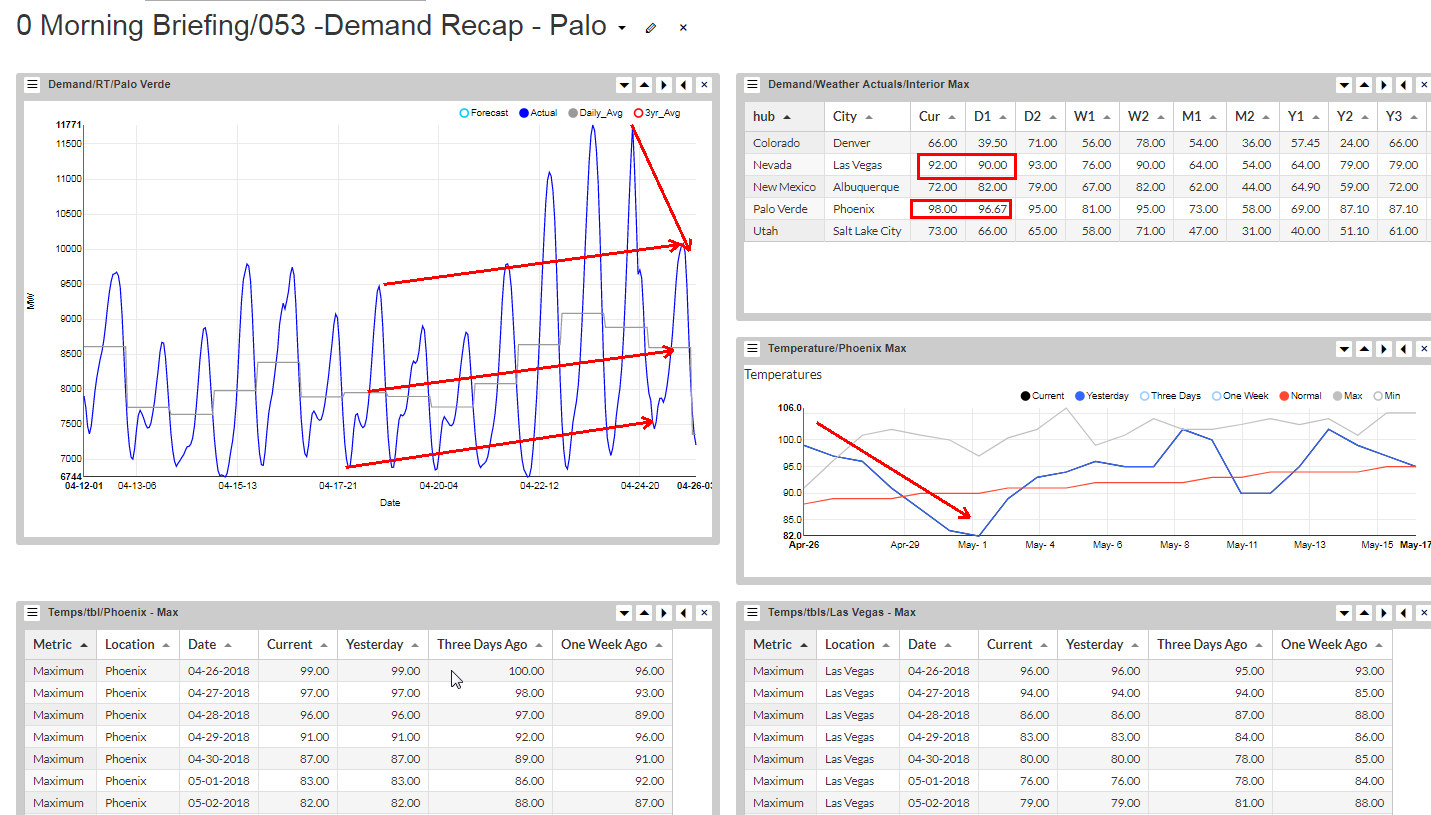 Week-on-week loads are up at Palo, but off sharply from Tuesday’s highs and not really sure how that happened given about the same temperatures. Most likely, the EIA has some bogus load data from yesterday, I’d check back on this chart later today to see if they fix it.

Looking forward, Palo is growing very bearish on chilly temps, way below normal. Interesting, because the Q3 commands such a massive premium this year which we assume is based upon a whole slew of 115 degree days; what if it is just a normal summer? You really think the whole thing will average out to 18k heat rate – hah! 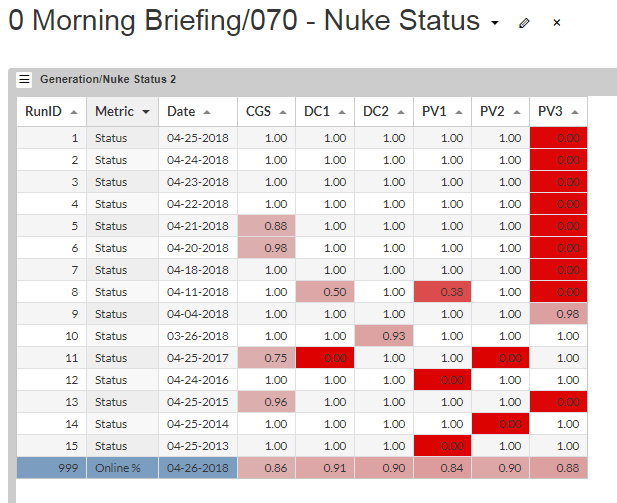 PV3 is in a refuel, nothing else is offline. 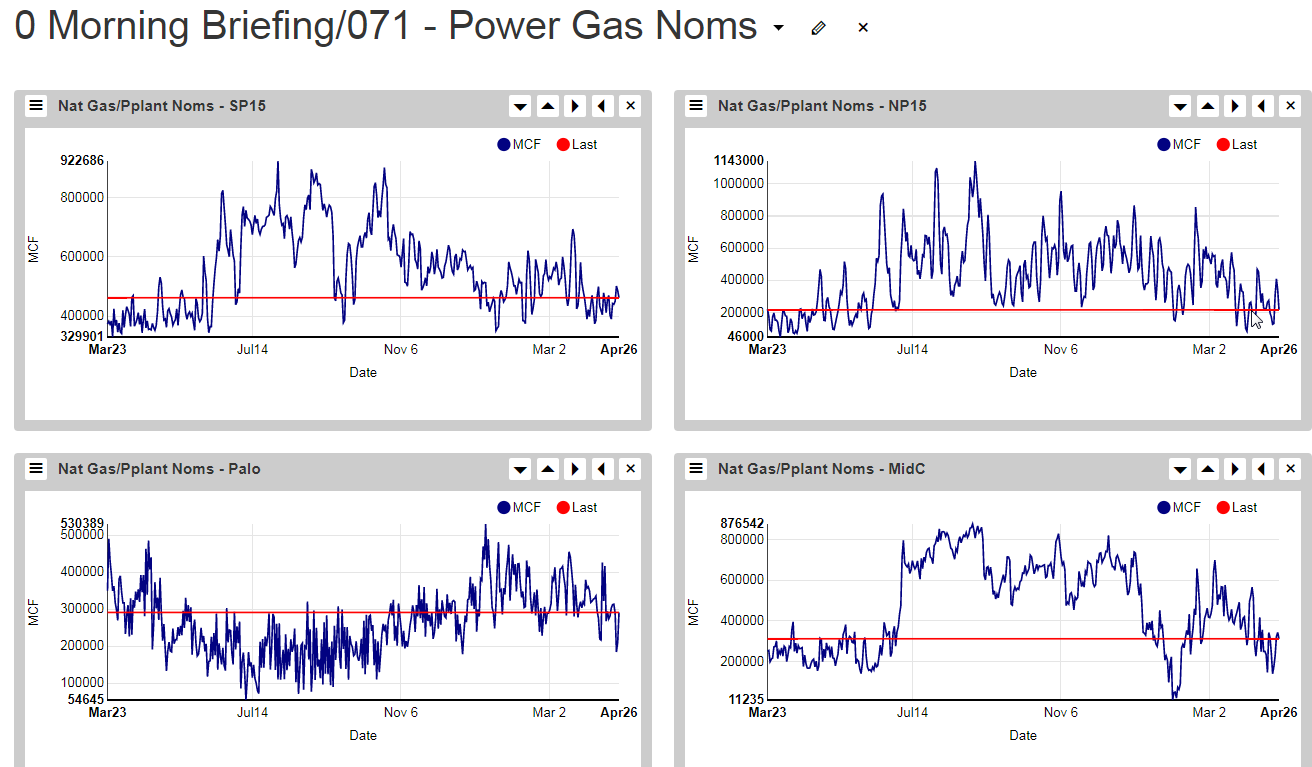 All hubs are near seasonal lows for power plant gas nominations, don’t see that changing next week. 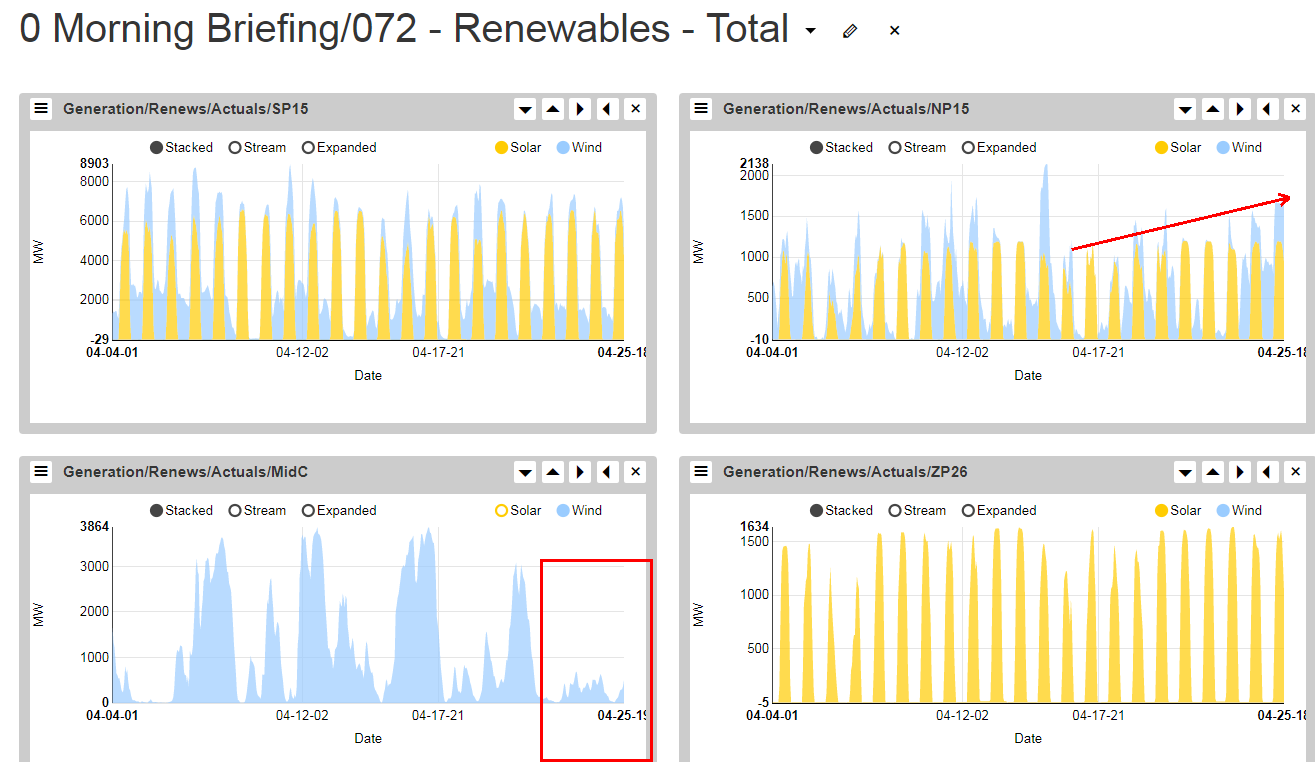 NP approached a seasonal high for renewables while the MidC had nada – so if there was any strength in the cash/real-time yesterday it was mostly due to a dearth of wind energy. That wall of water is coming but BOM, the last four days of it, seems safe. 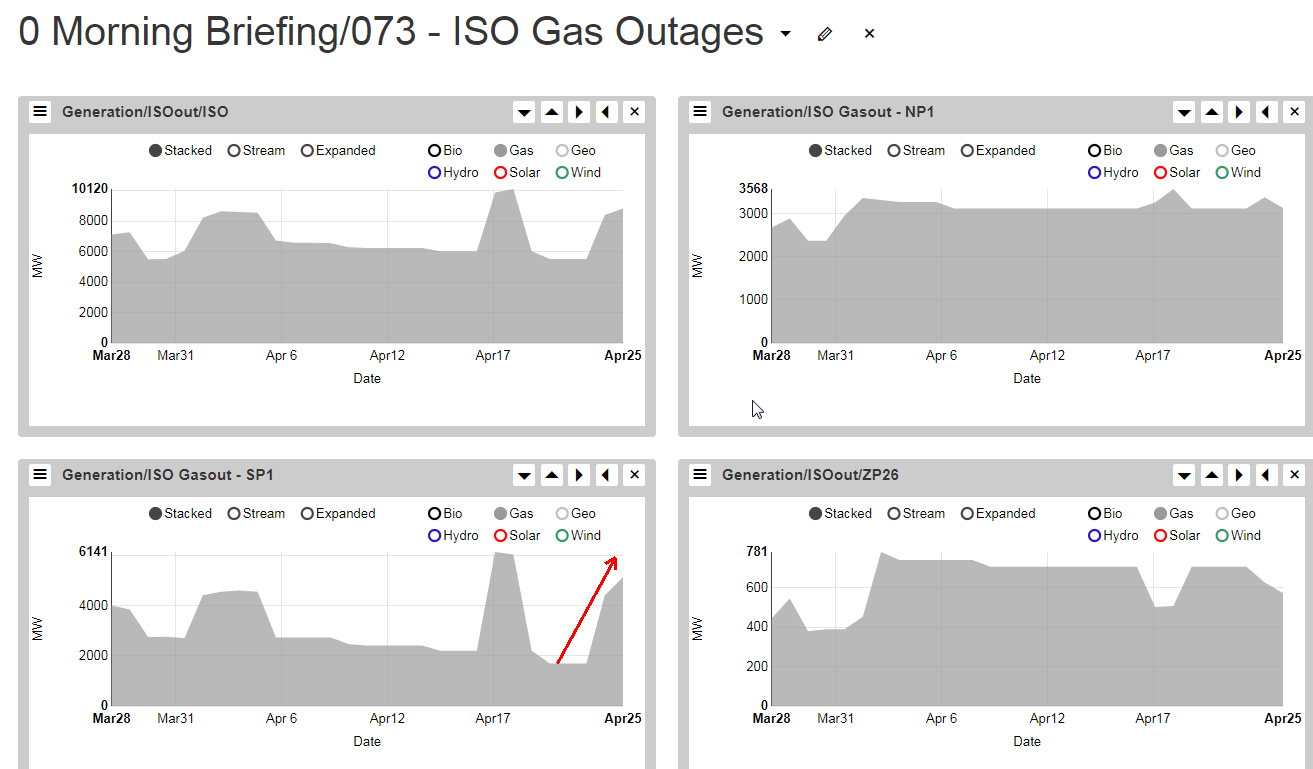 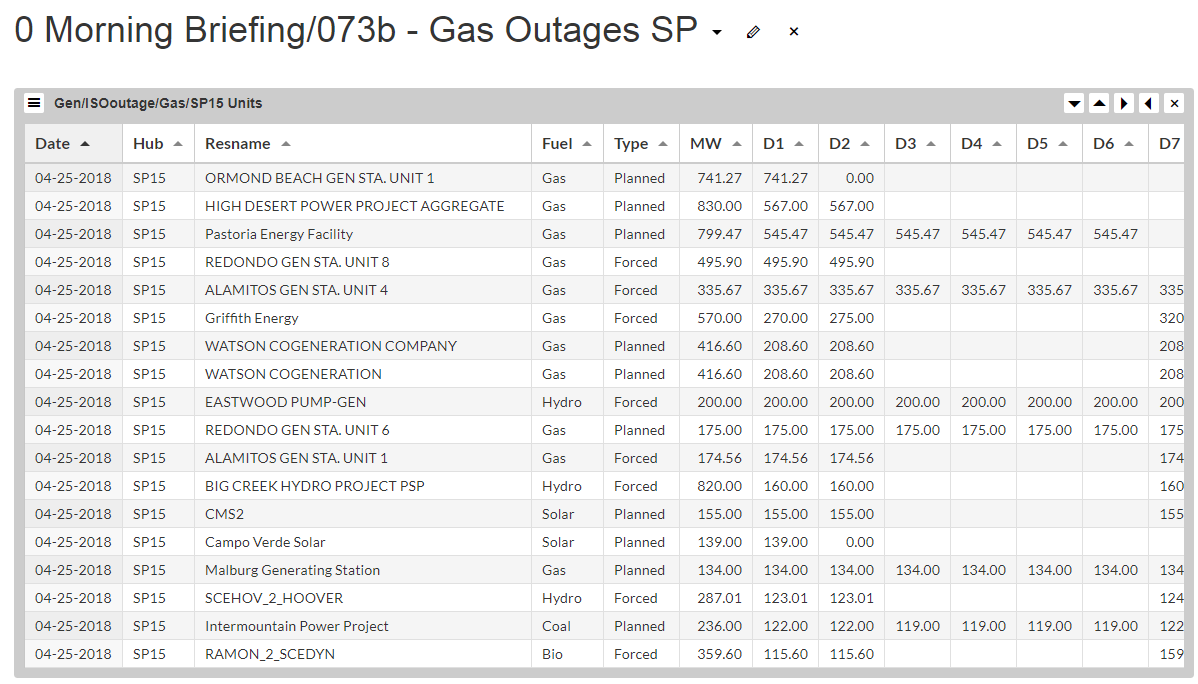 Just two feet left in the draft, then BPA can start refilling. Doubt they do much refilling next week, seems they typically pause for a week, but given the warm weather and the expected inflow surge, maybe they do commence on the 1st.

For now, we are seeing little signs of any surge, anywhere. 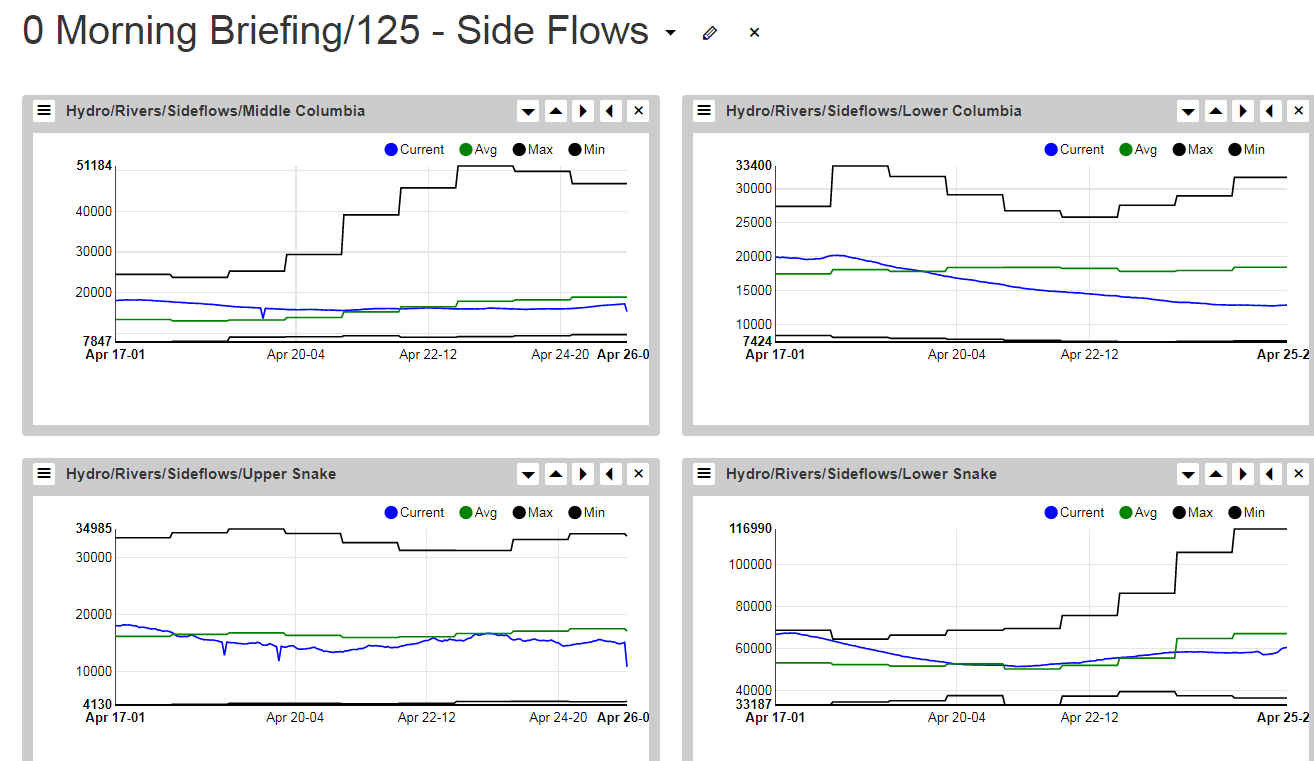 Side Flow Indexes are flat. 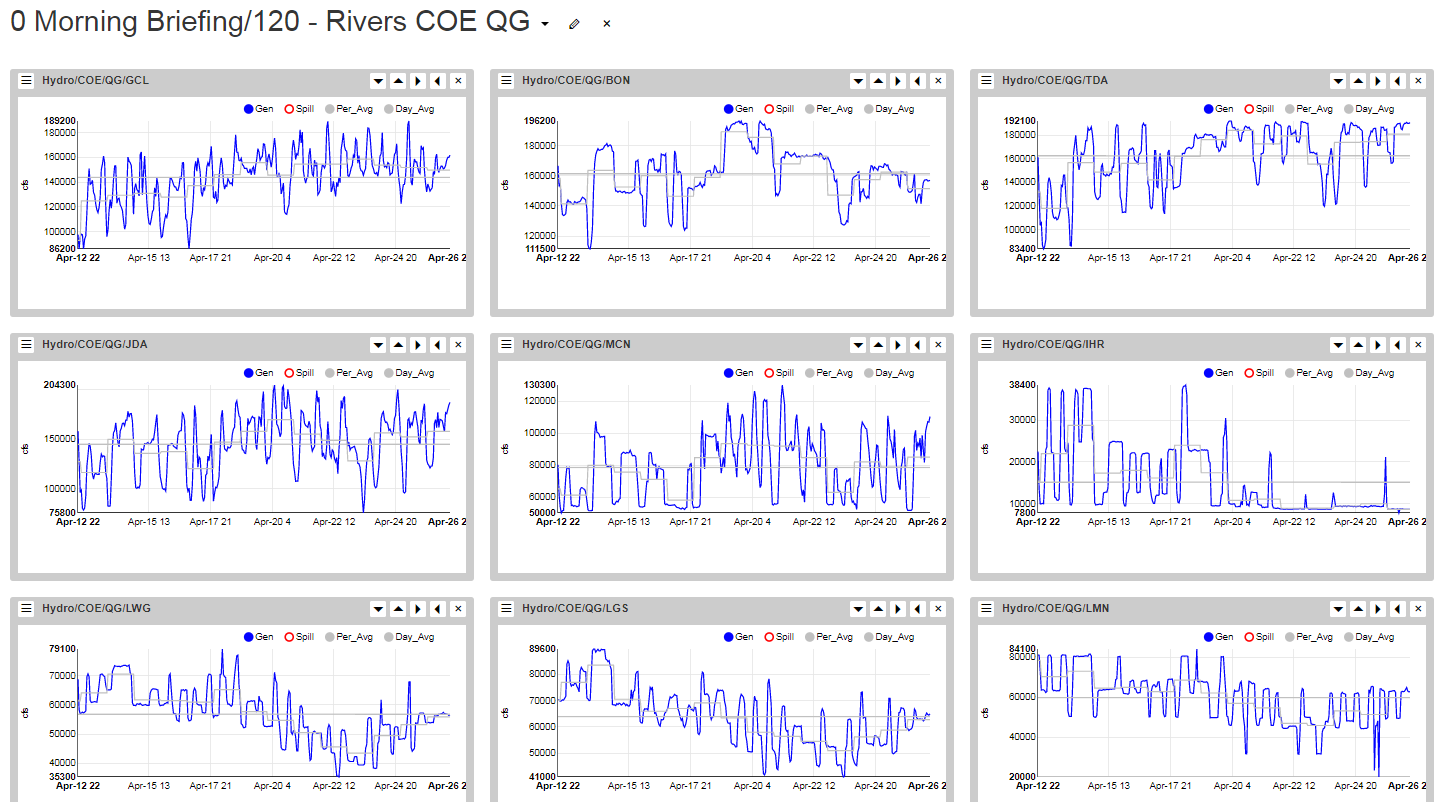 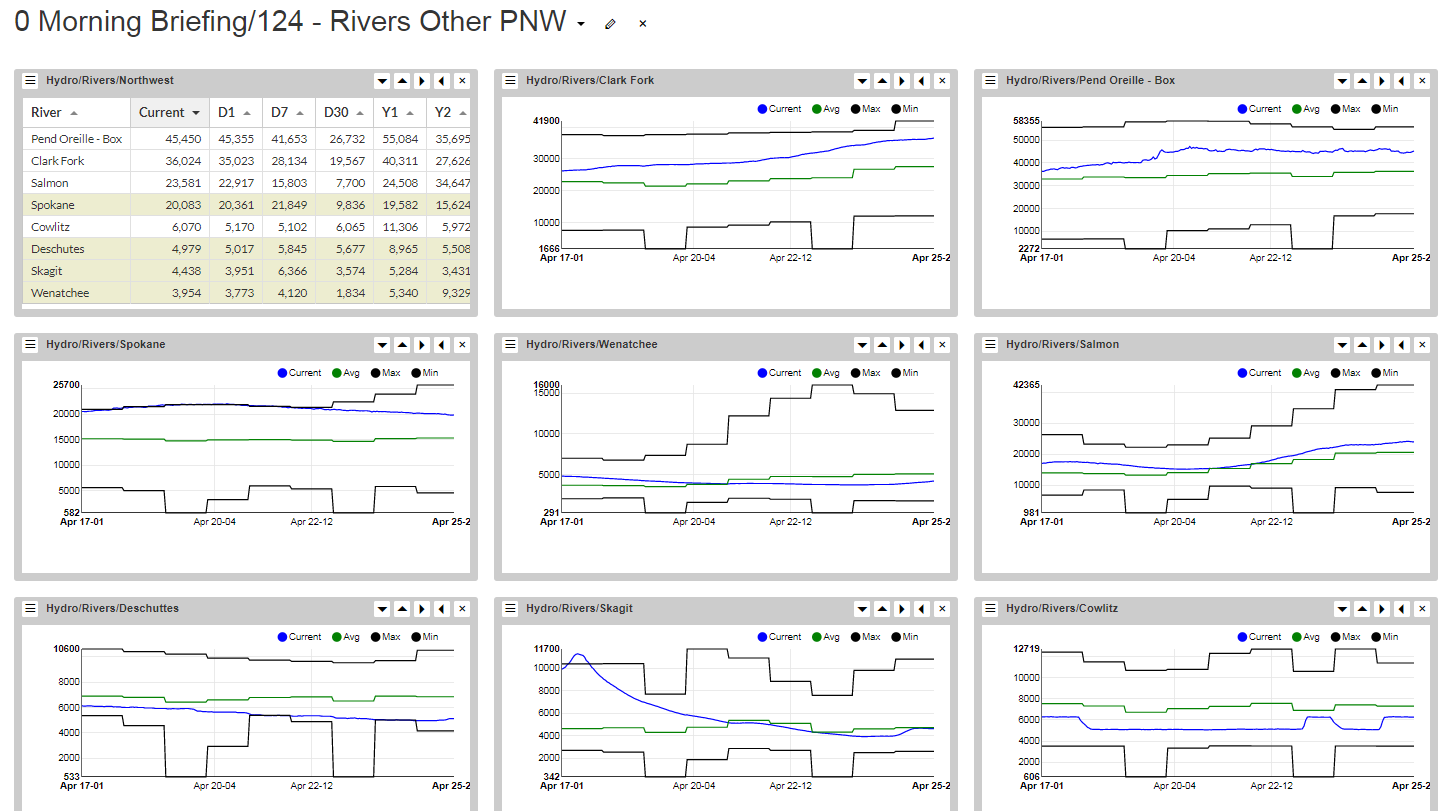 Clark Fork continues to rally, now approaching 40kcfs, though the Spokane is retreating, surprisingly. We are expecting that river to soar starting later this weekend. The Salmon is also showing signs of a rally. 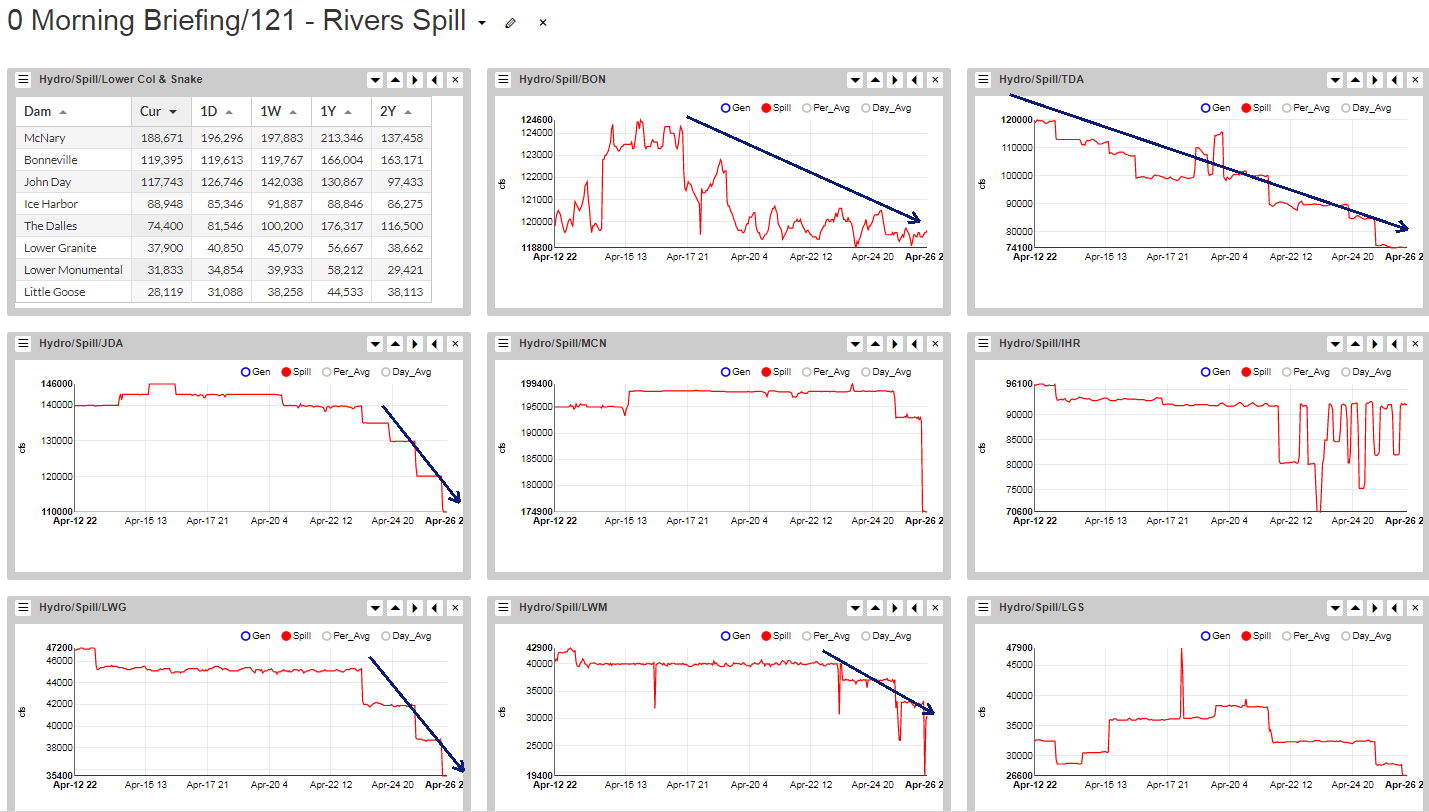 The Spill is more volatile than discharge, most projects have seen a sharp reduction in spill over the last week. 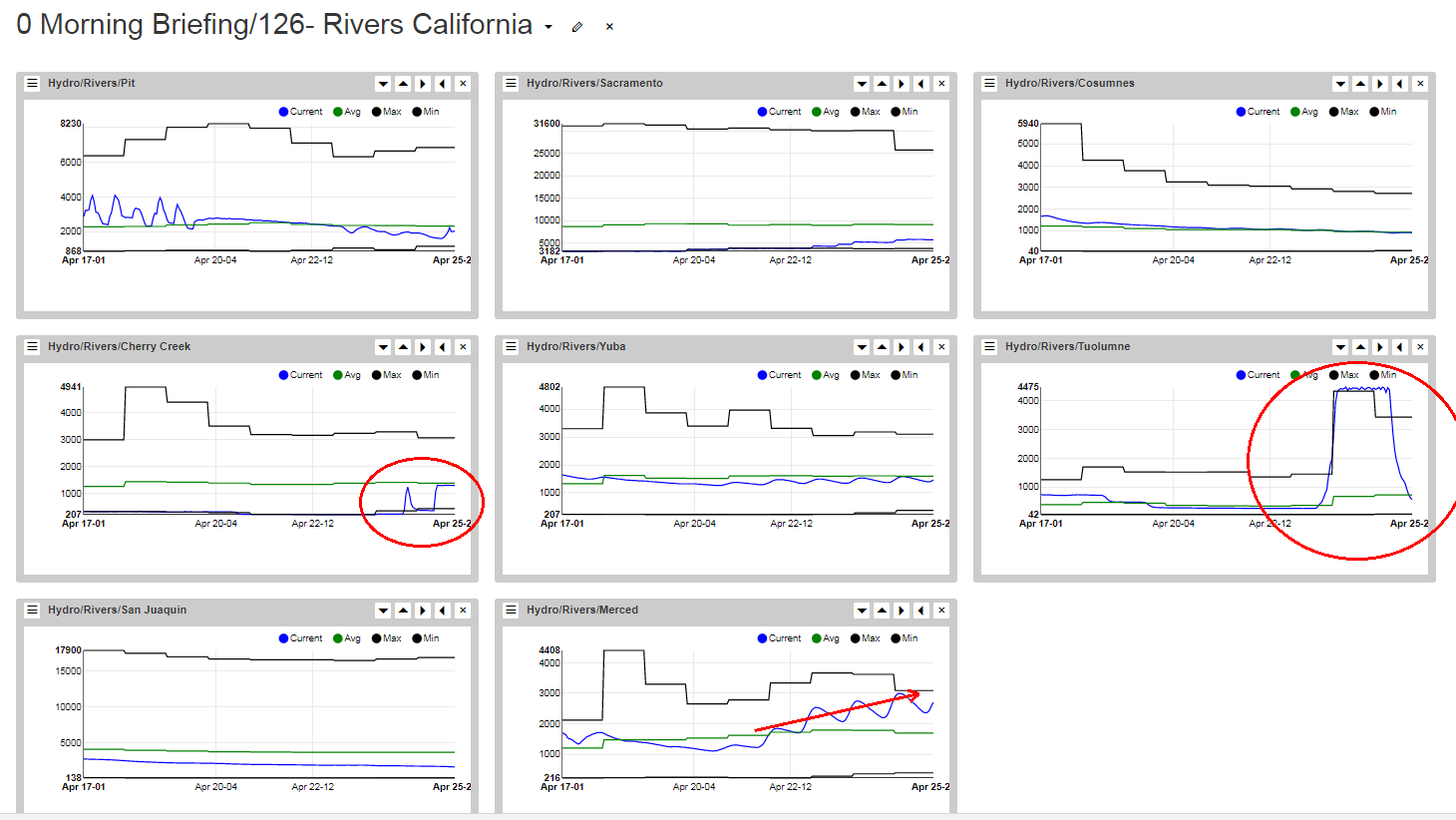 Some of the California rivers are showing signs of runoff, especially the Merced. The Tuolumne rally looks regulated to us.

We expect next week all reservoirs to begin filling, for now a couple are still drafting. 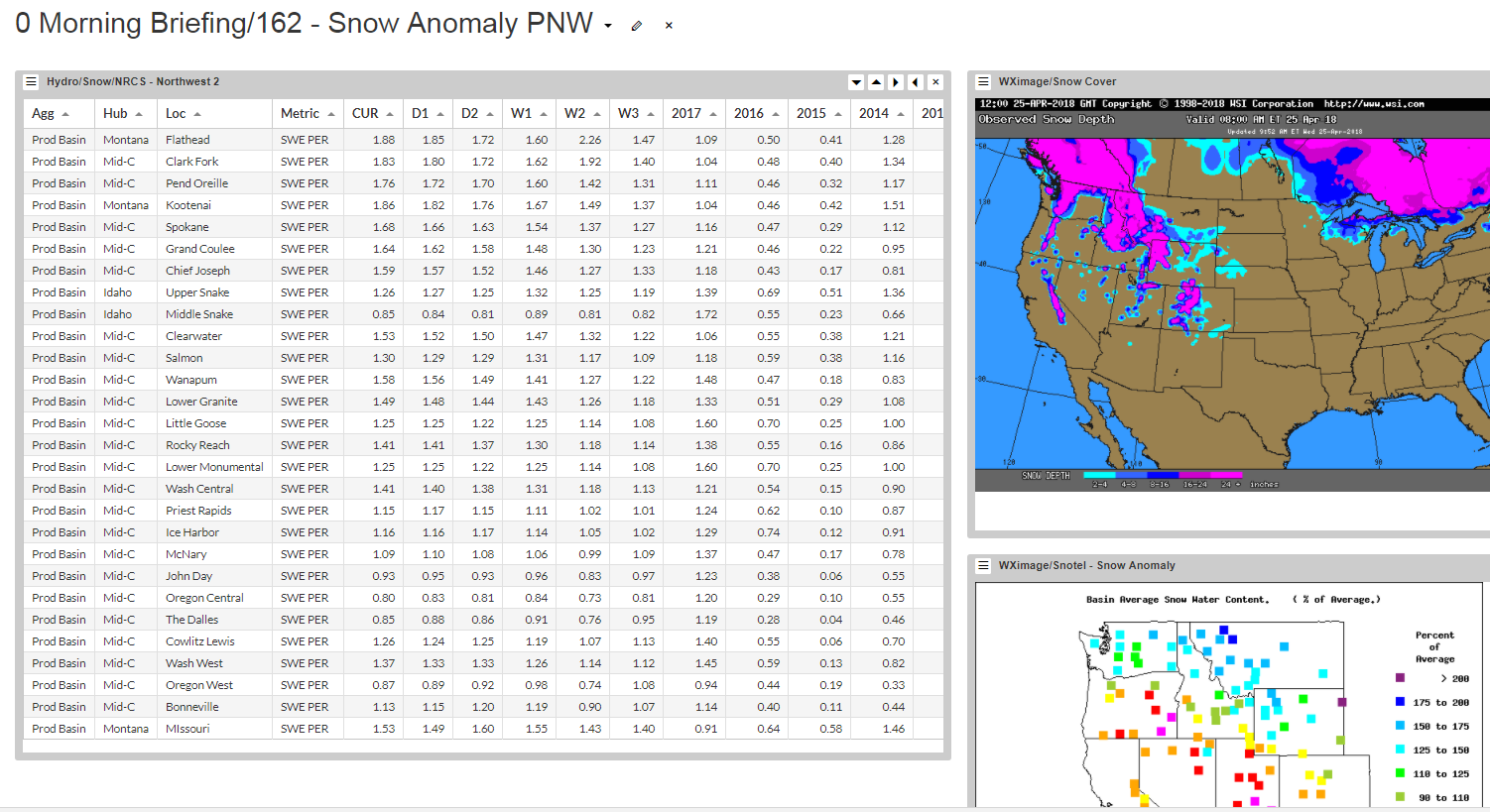 Believe it or not, the snow anomalies have been building this week. That should change once this heat attacks the snow, but for now this water year just keeps getting bigger. The STP jacked a lot of water into the front of its curve, even cut some from the back, we’d be a bit cautious about deploying too much of that:

April-June suggest a massive water year, but July and August really don’t. That, we feel, is a mistake. Even though there were three days of warm weather in April, it doesn’t warrant a massive shift into May. 2011 and 2012 just leap off the page, each of those years realized about 5000 aMW additional energy equivalents than what is projected for this year – and this year’s anomaly is bigger than 2012, but lower than 2011.

Total ISO hydro energy is off over the last week, but with signs of melt, we’d expect another rally soon. 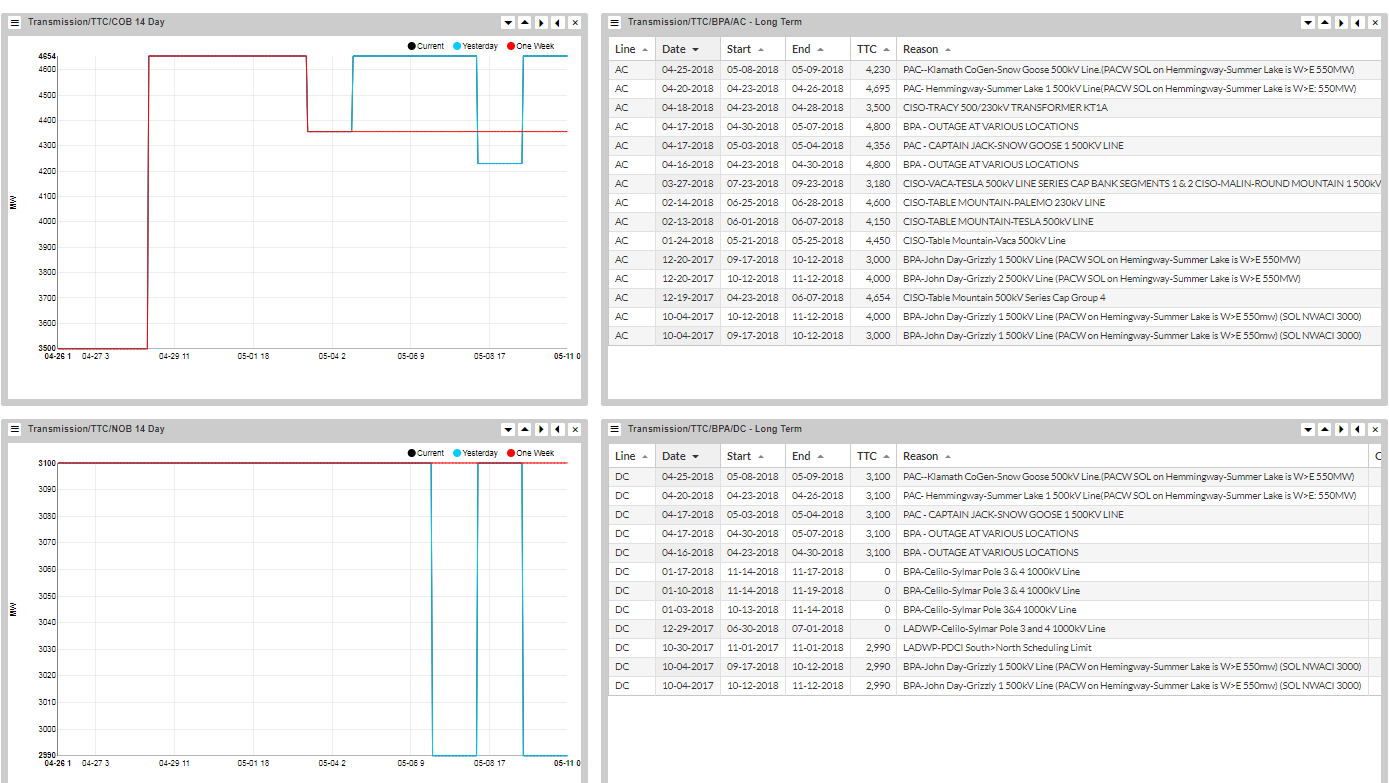 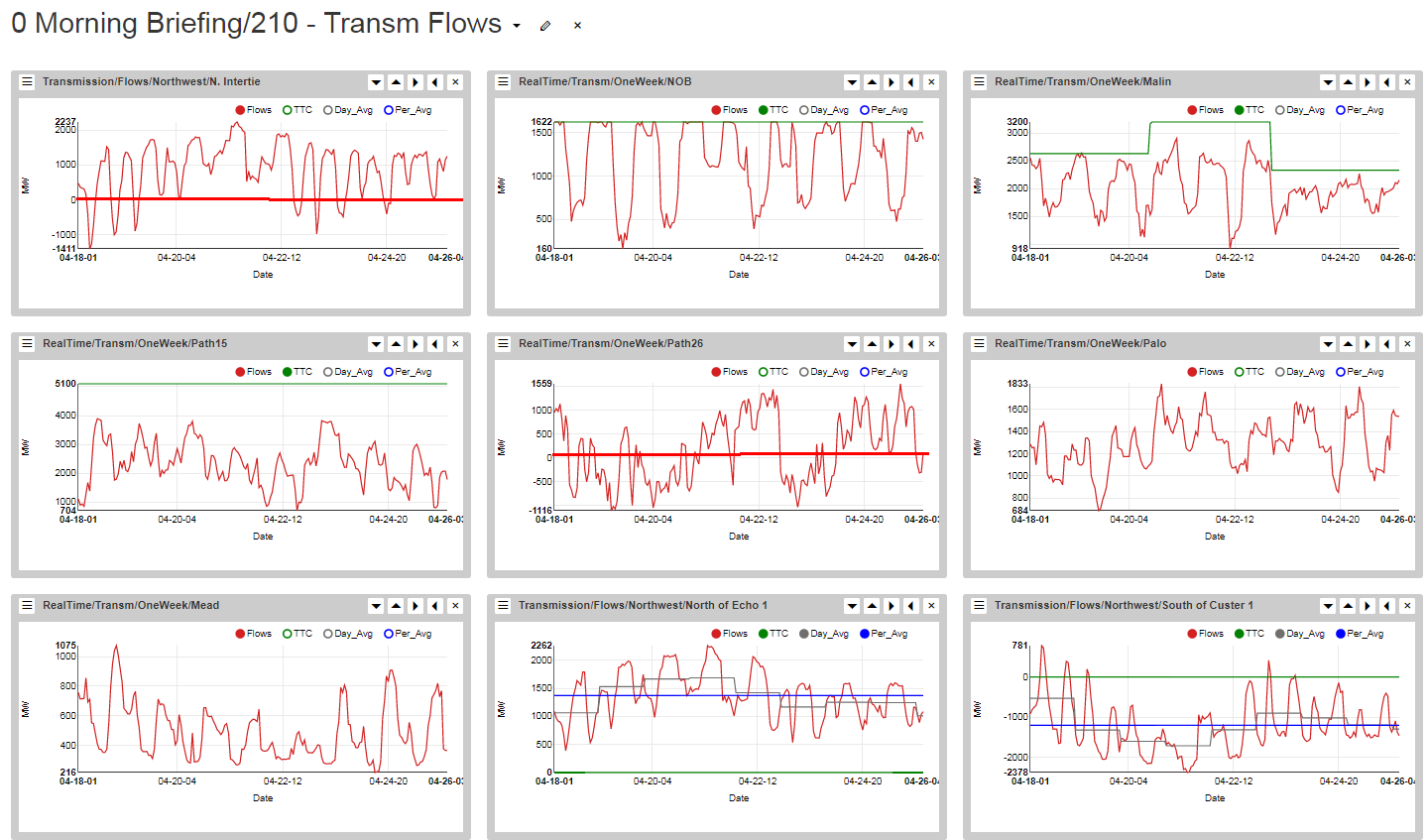 Next week should get more interesting as the expected melt should hit the mainstem. That said, the end of draft takes place over the weekend and temps cool down, so perhaps May doesn’t start out with a crash, perhaps BPA keeps gas on the margin in HL and the new BOM looks cheap? More on all of that in a subsequent post.