Socal saw its first hints of summer, some 90s in LA, and the market yawned its way through the event. Partially, because the rest of the WECC was in a coma, partly because the ISO has another 1500 aMW of hydro, it must dispatch before getting to gas.

Looking ahead, the weather is more bearish than bullish, everywhere. The Northwest remains on the chilly side, but just normals, or slightly below, is enough to trigger some lower-level melts. We are seeing many Northwest rivers increasing flows over the last couple of days. That bump is but a foretaste of what is to come, but it is starting, albeit very slowly. In fact, don’t talk about “freshets,” you should be talking about “builds” as the anomalies above Coulee may be setting 30-year highs this year.

Our station level forecasts mostly agrees with NOAA, except we see more heat in Az and some significant precip inland Northwest. More on that later.

One last summary thought – the Corps of Engineers released their last Flood Control on Tuesday – Coulee will be drafted deeper, to 1222′, but that should come as no surprise.

This is a new dashboard; it summarizes the LMP prices for HA and DA for the four traded hubs (using Cpt Jack as a proxy for Mid-C). Each plot is a spread against an adjoining hub. Despite the mid-90s in LA, the ISO didn’t do much.

Socal still carries a premium to PG&E, probably will until the Transwestern Line fully returns, or maybe forever given the neutered status of Aliso. Aside from that, the spot gas takeaway is how cheap gas is across the western USA. 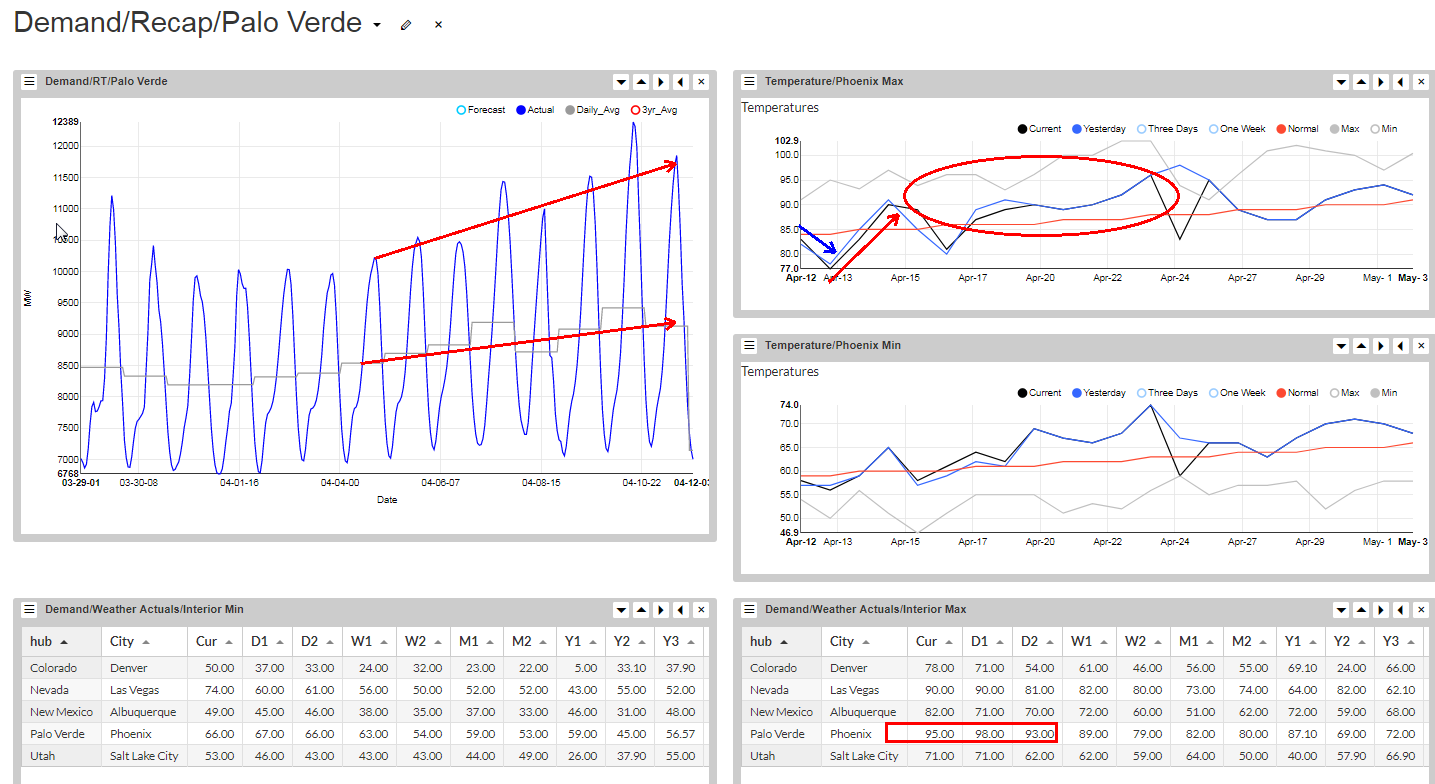 Sharp demand rallies at the Palo hub, those off of high 90s. The outlook is to cool over the weekend then a long string of positive anomalies beyond. 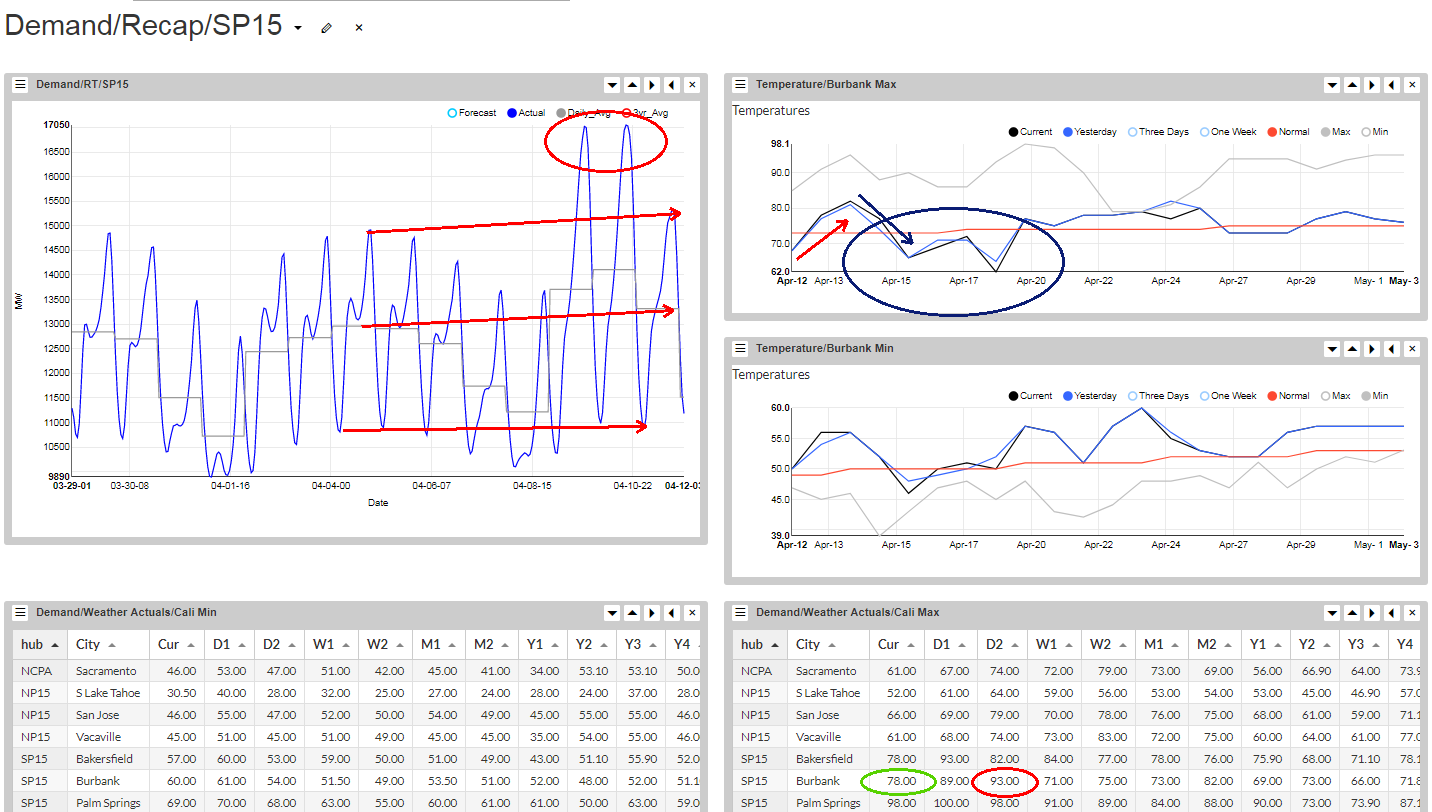 SP’s demand rallied sharply off of its 90s, but alas, we don’t see any heat in the next 21 days. HA prices barely budged during this hot spell. 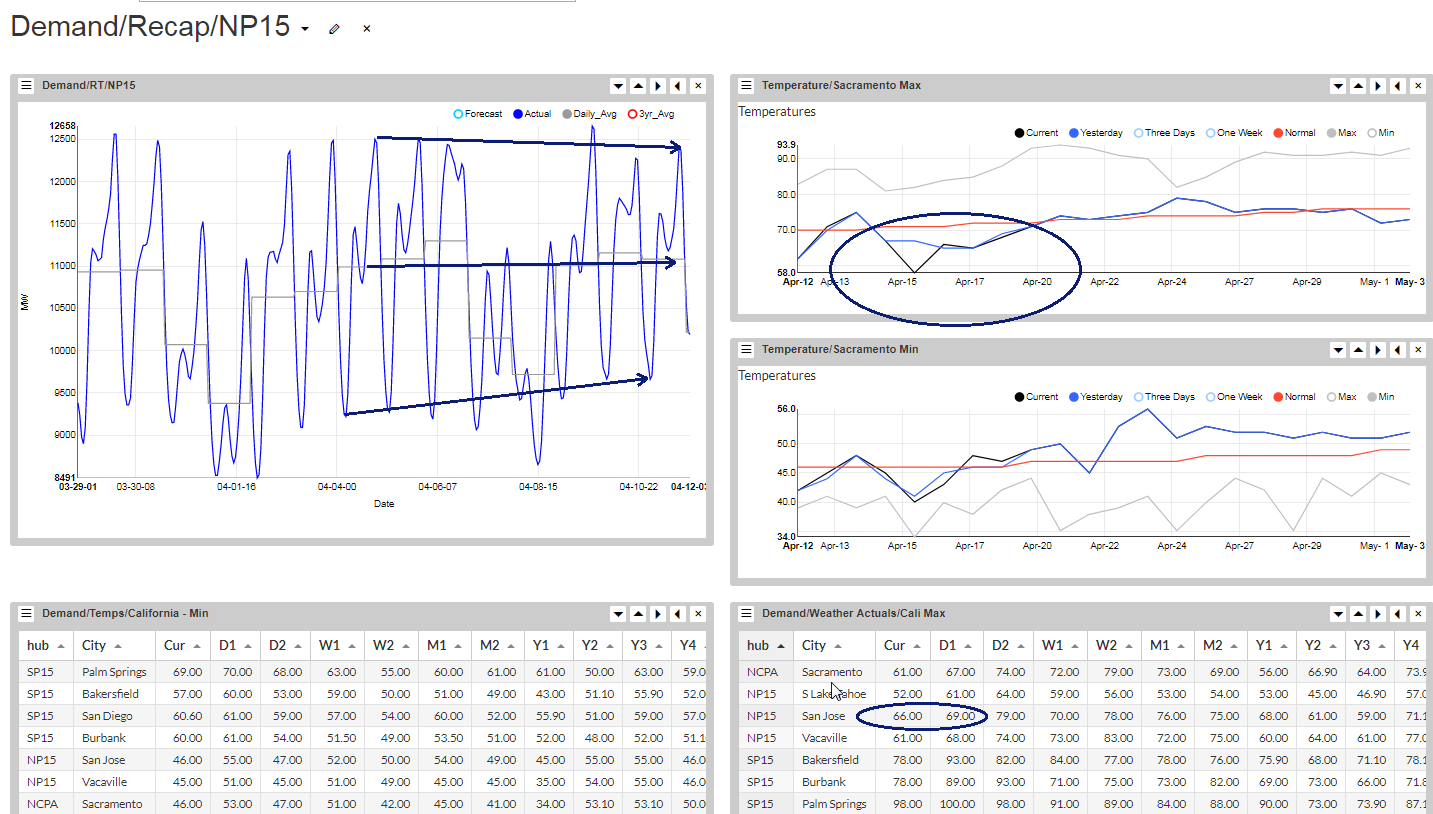 No load moves at NP; temps were too mild, the mid-70s. Nothing changes, either, temperatures are mild for the next 14 days. 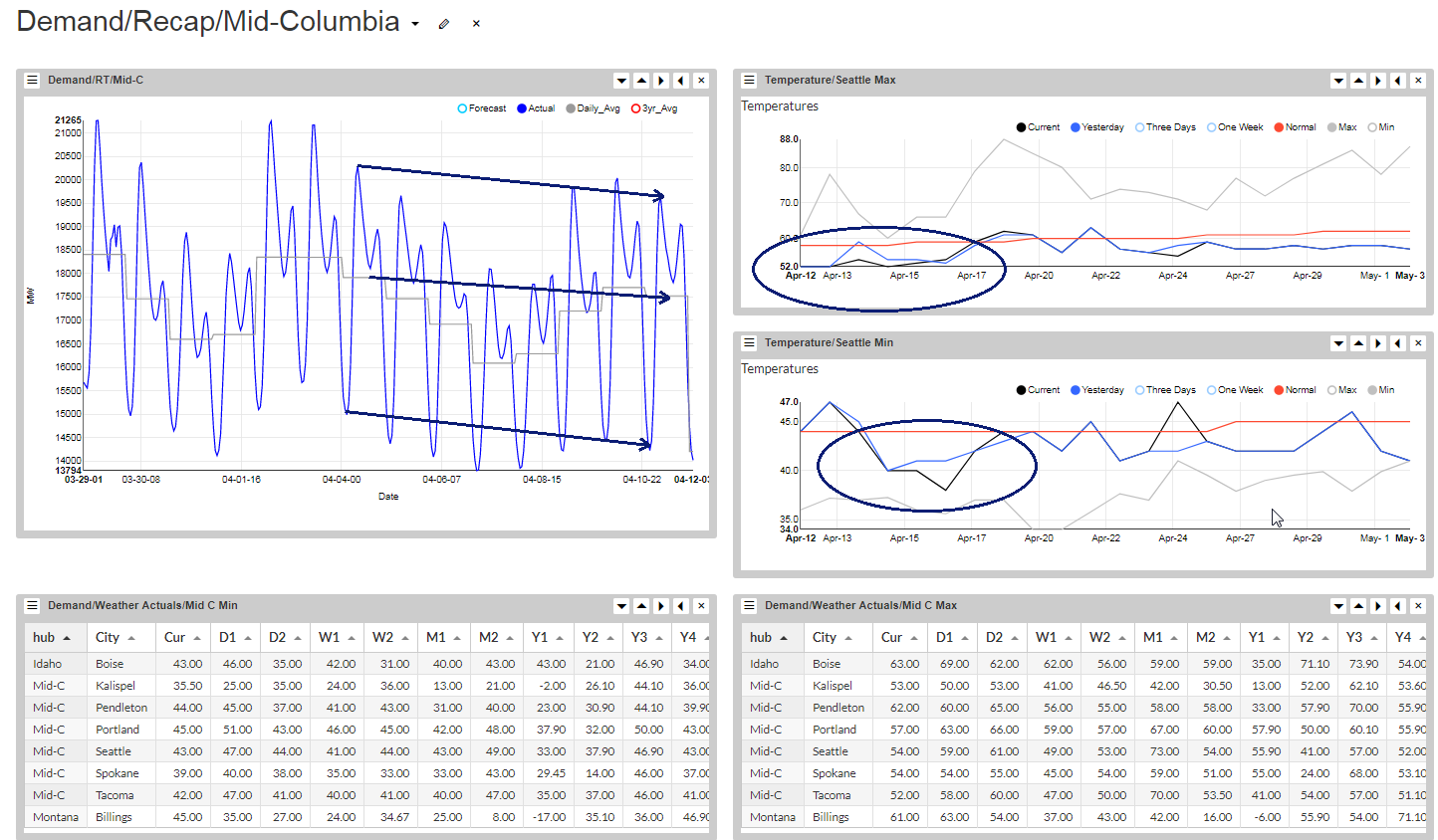 Northwest loads are down and show no signs of changing; the volatility in this temperature forecast is remarkable for how little volatility there is. The PNW has been in a cool streak for over two months, and we see no signs of that breaking down, suggesting more June-August runoff deferrals. 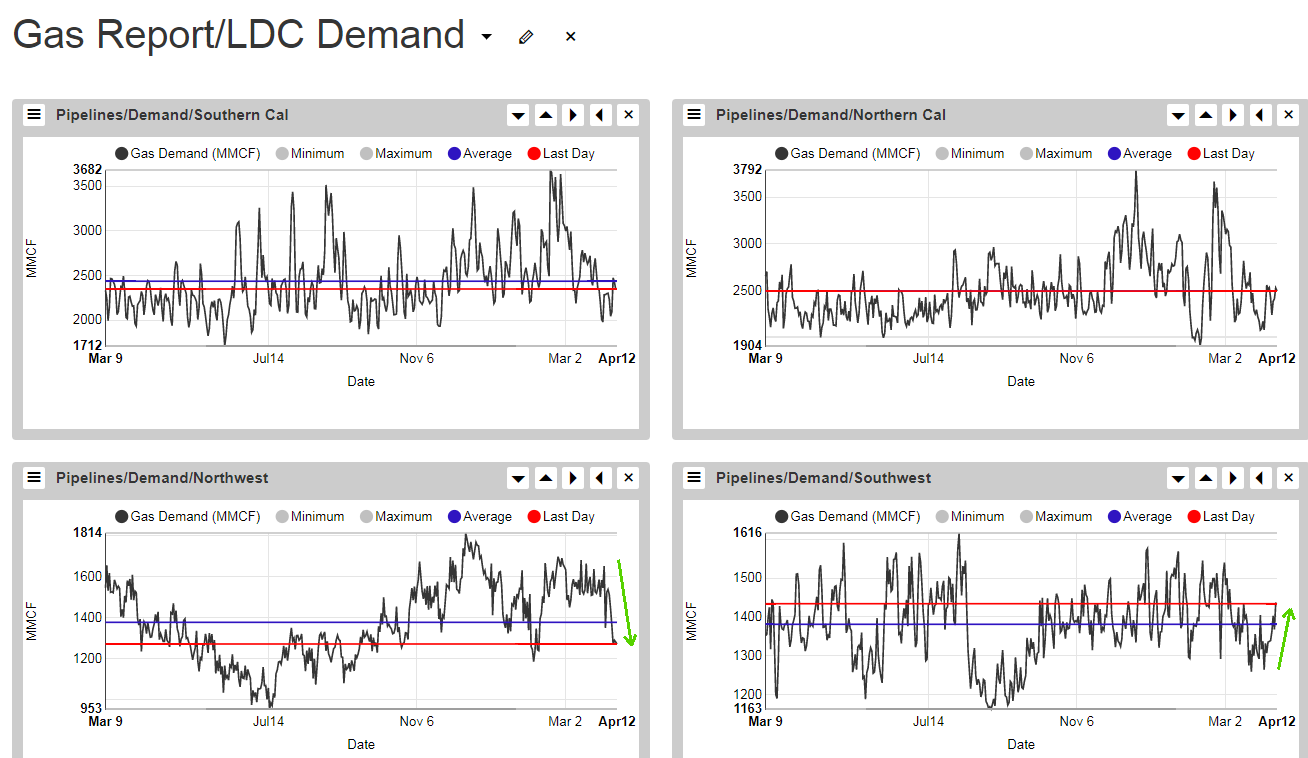 This report is compiled off of all gas nodes labeled “LDC” and acts as a Core Gas Demand Index. The ISO is sideways, the northwest is tanking, and the Southwest is rallying.

Problems with the nukes: 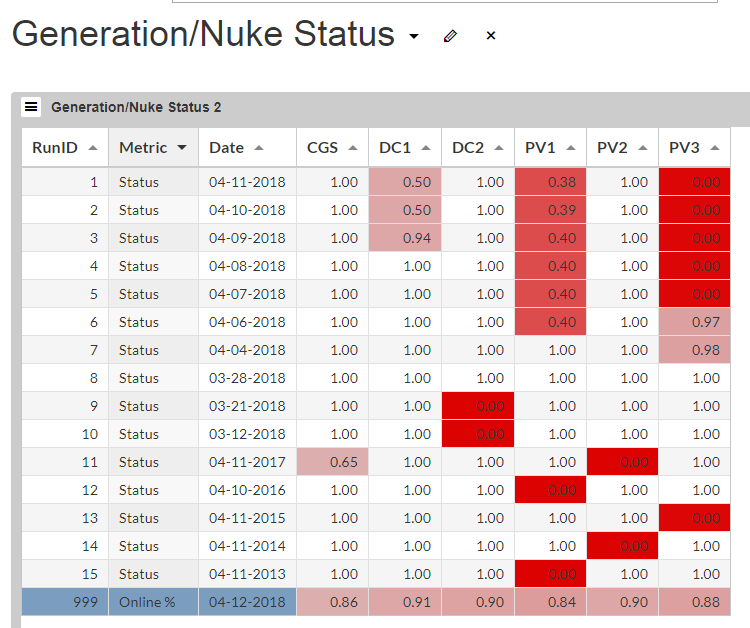 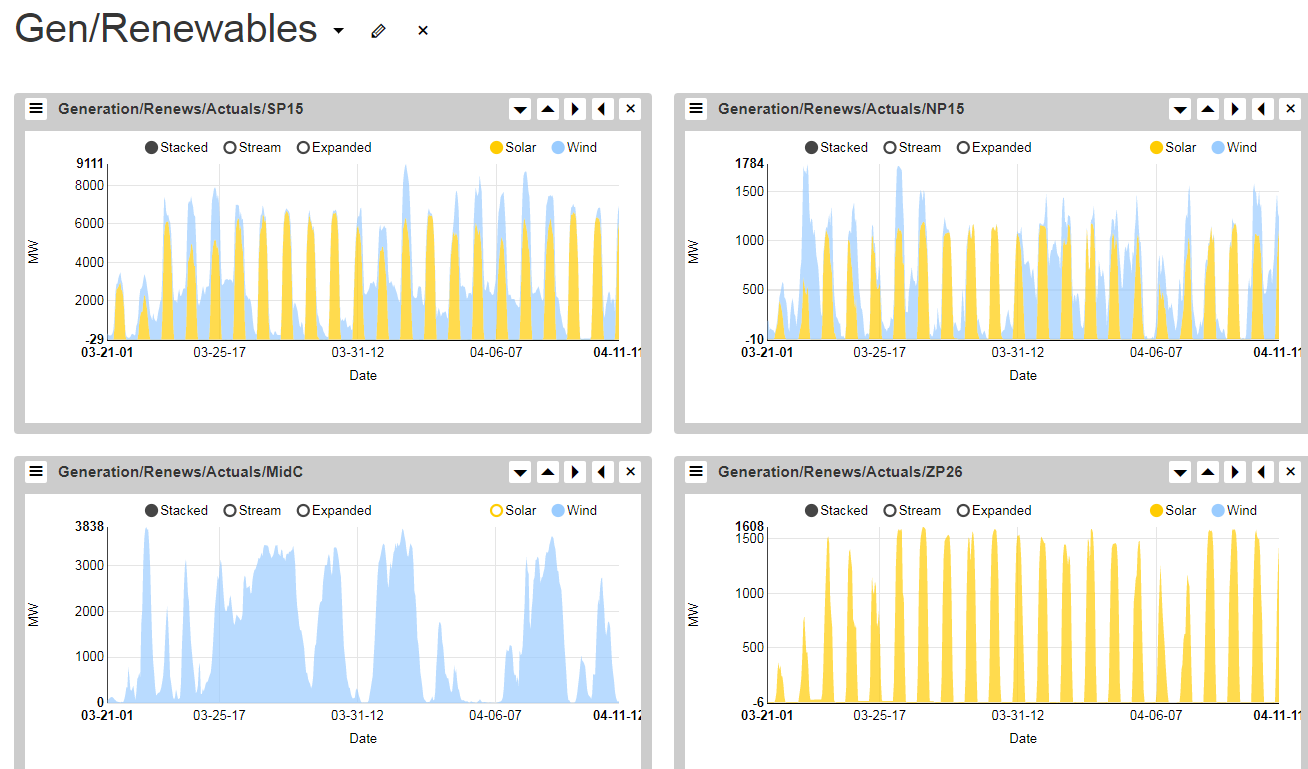 Lots of wind, let’s break out the ISO by type: 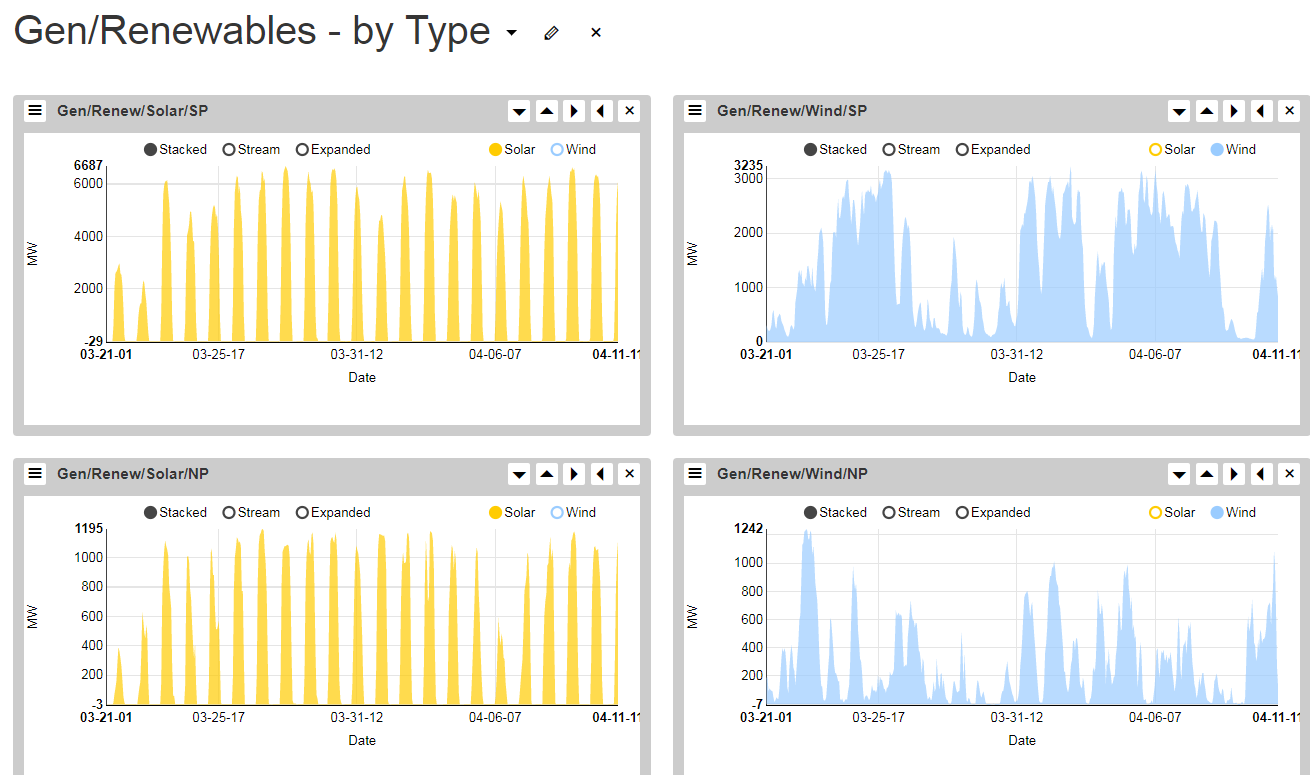 SP realized nearly 3000 aMW of wind this week, add in the 1700 aMW of new hydro energy, and you just explained away the 2000 MW demand spike.

I computed a delta change in KAF, March vs. April: 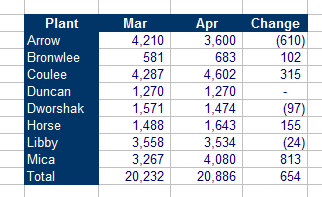 As expected, the PNW will draft deeper, but check out the Arrow offset – almost half of the incremental draft is absorbed by the Arrow change. The most significant change is at Mica where an additional 800 KAF will be pulled, but the Arrow cut mostly offsets this. Net of all, really not a big deal. What is a big deal is the amount of snow accumulating above Coulee:

Yeah, you read that right, 225% of normal at the Flathead. No doubt Big Mountain was epic this winter, maybe the best ever? Just the thought of all of that powder makes my aching knees ache even more.

This water year is unique in that the big anomalies are on the Upper Columbia; the Snake is closer to average than not. But most of the production (MW-wise) is on the Columbia above the Snake, so apparently those anomalies must be weighted more heavily. Let’s look at this week’s STP:

Red is 2018, most recent week (4/9/2018). Looks reasonable until we get to July and see that five water years were higher. Let’s dive deeper and look at the snow anomalies for those years:

2018 is bigger above Coulee, so can the Snake explain 5000 aMW? We don’t think so and have been harping that the July is understated. The NWRFC added 1200 aMW to July this week; we think they are still 2000-3000 short. Of course, the actual flows in July will be dependent upon CDDs in May-June, but right now those are non-existent. The Northwest is amidst a long-trending cold snap that shows no sign of abating, at least as of this post. All of which means even more runoff is getting pushed into July and August.

And those builds aren’t over; we already showed its normal to cool, check out the precip forecasts:

Spokane is projected to receive over an inch, all of which will come down as snow on the Pend Oreille, Clark Fork, Kootenai, and Flathead basins. These anomalies are going to grow, not shrink, over the next ten days.

Another change in hydro land is the ramp-up of the spill; that bump was scheduled to take place on the 10th, it is now in place: 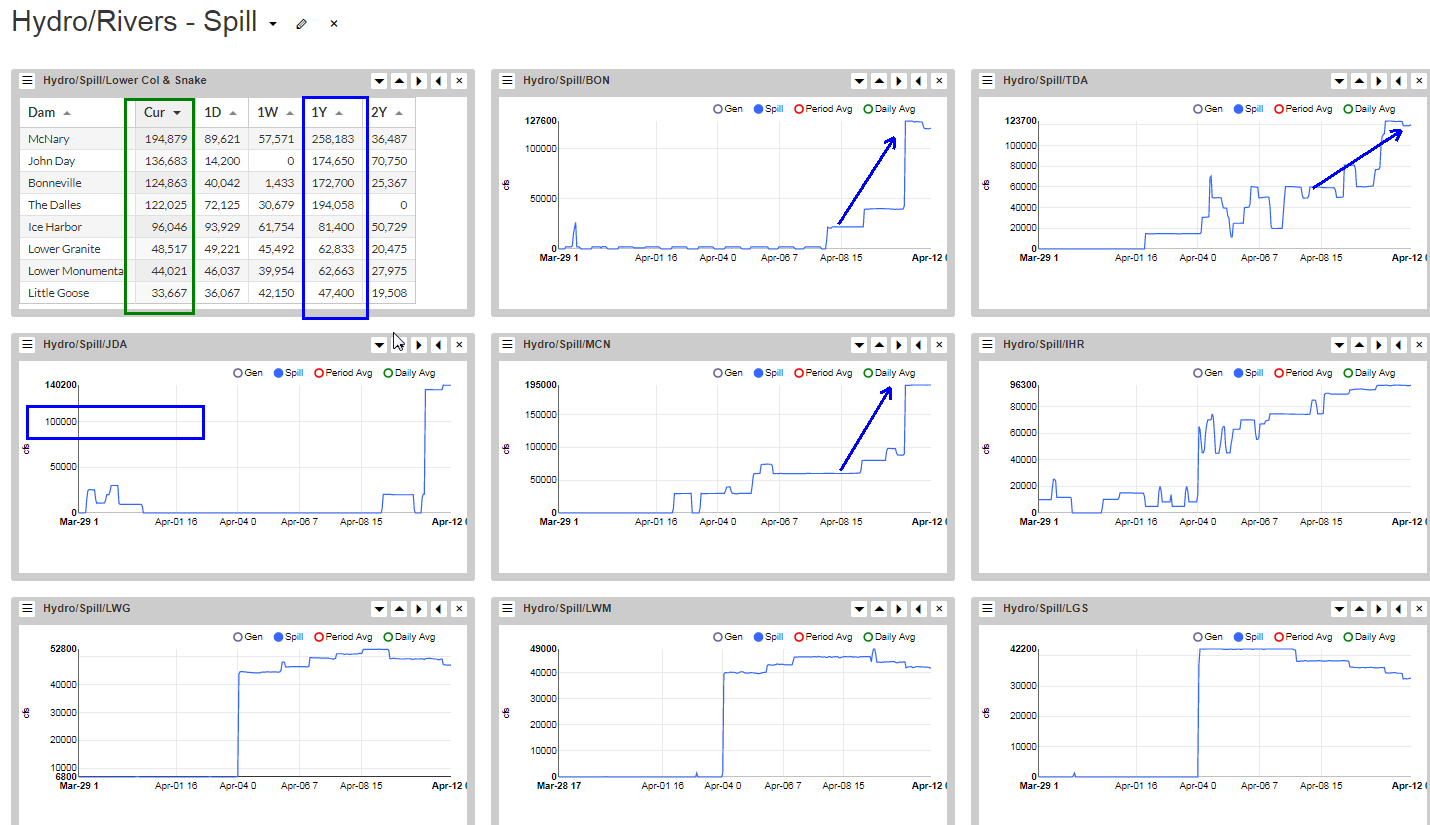 Mainstem Columbia and Snake saw their spill about double; those will be the levels for the foreseeable future, except as inflows increase so shall spill. I’d have to think even Coulee is going to spill this year, maybe in a huge way? Contrast today’s spill versus last year’s (first table). Those last year #s will become this year’s #s once it warms up.

We mentioned seeing some streamflow rallies: 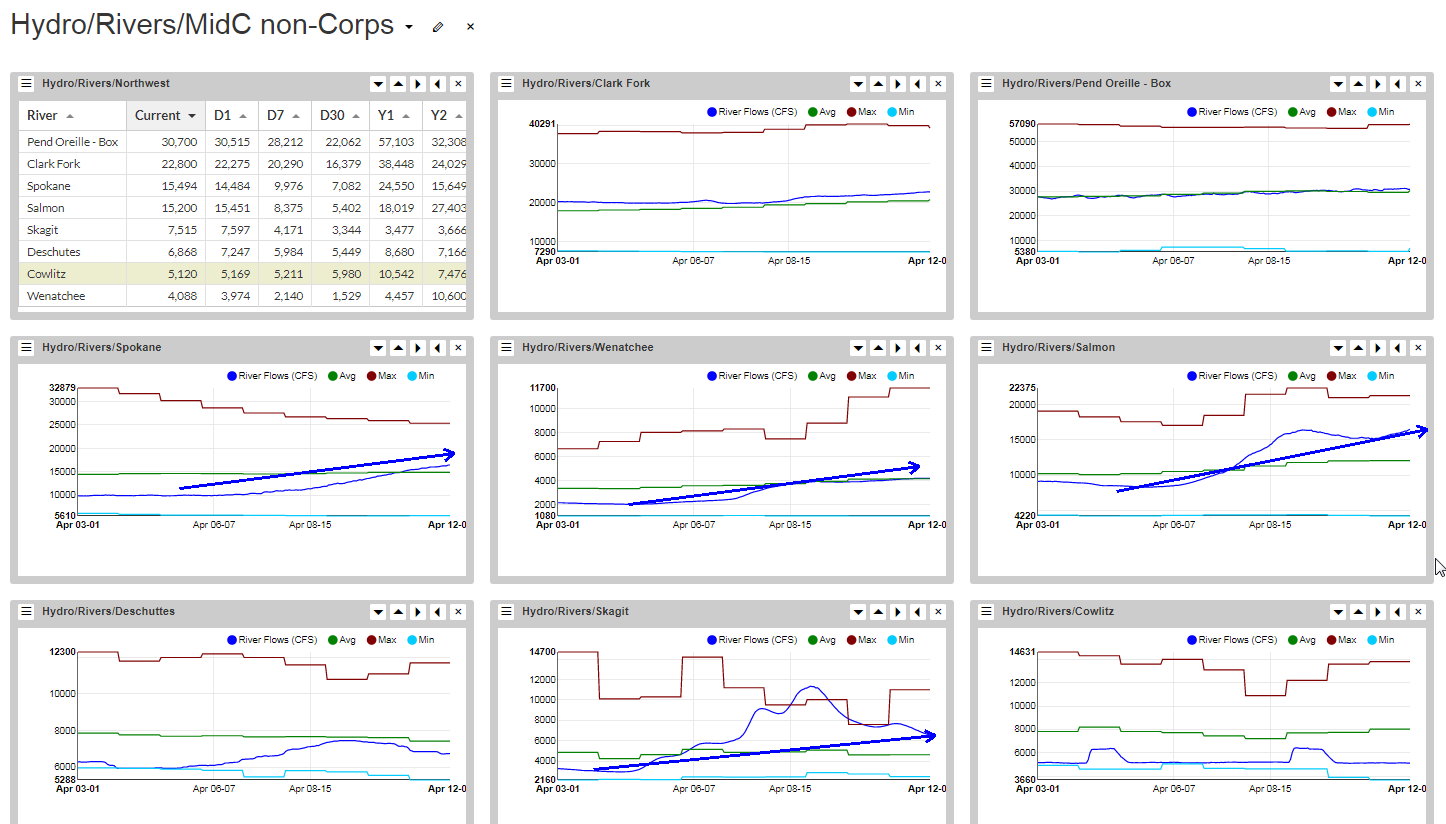 The Spokane is a good barometer of lower elevation melt, that river is up 50%. This year, it may peak around 50 kcfs, while the Pend Oreille may peak above 100 kcfs. So the freshet is starting, but not quite ready to explode; you’ll need some 70s, or better, some 80s to get these plots explode upwards. 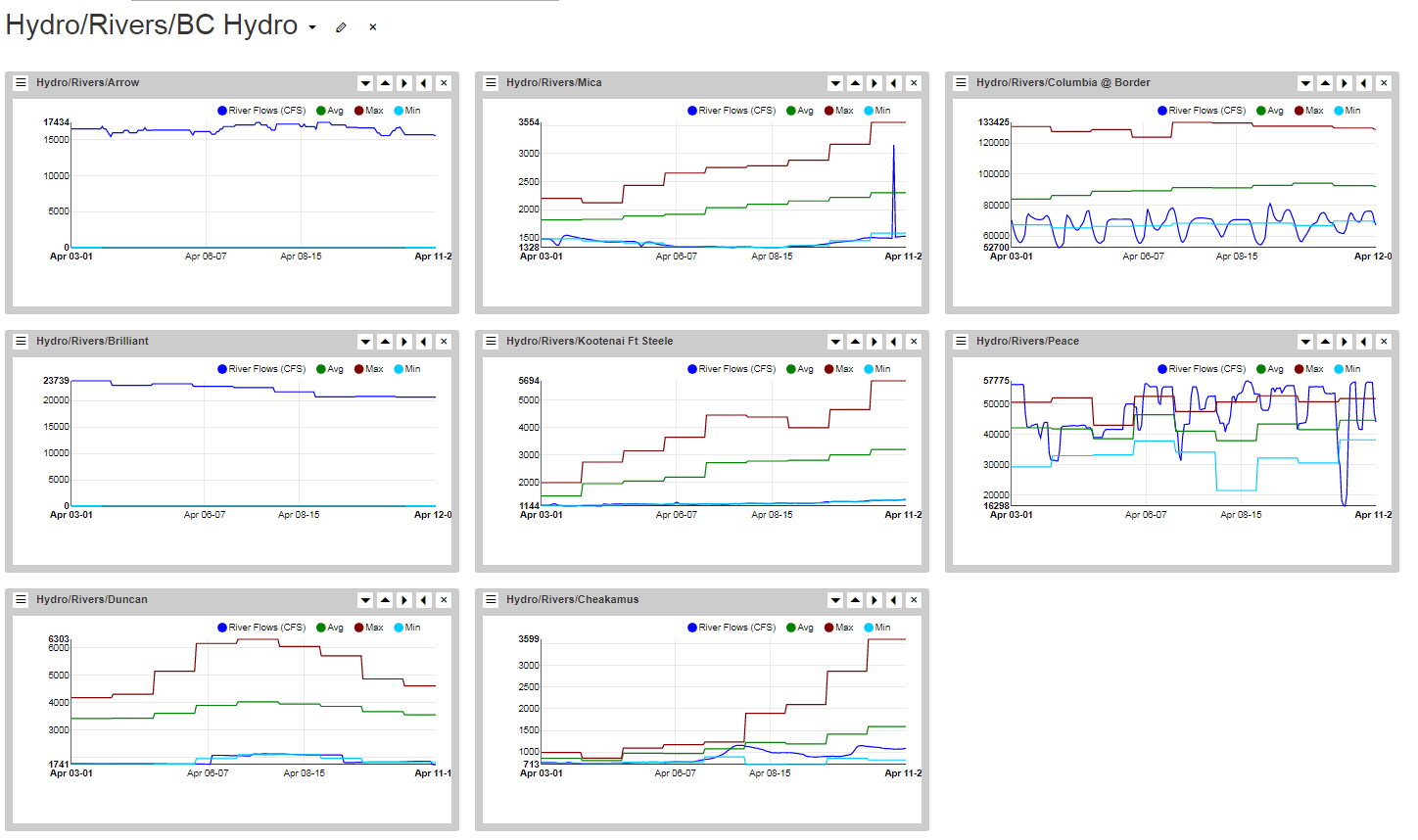 Most of BC’s rivers are below normal reflecting the cold weather. That probably also explains the province’s aggressive buying on the Northern Intertie. 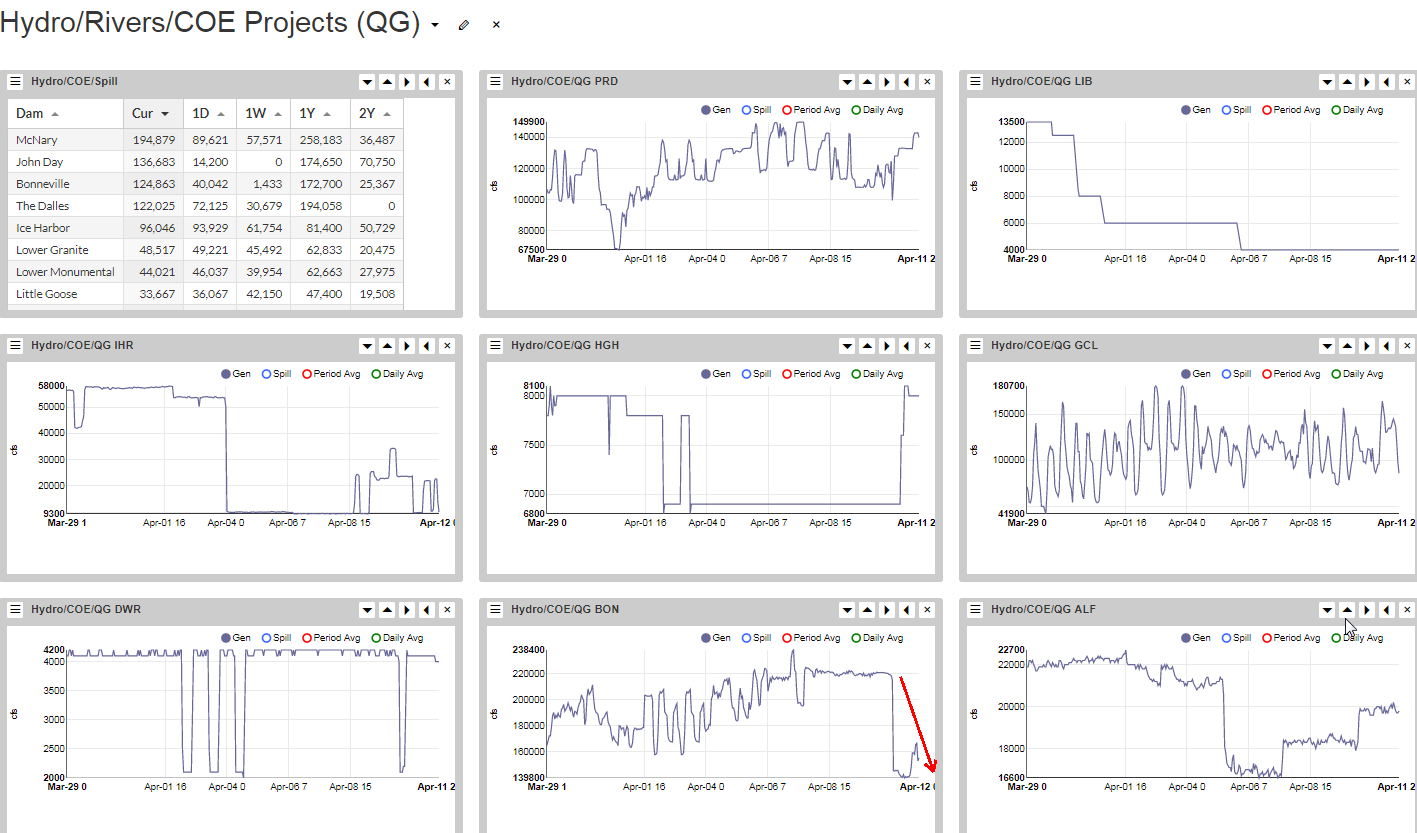 These are the Corps projects and are plots of “QG” – flows through the turbines; flows net of spill. Check out the cuts at Bonneville.

Coulee is drafting fast and furious; all the while net flows are barely moving. Don’t expect single digits at Mid-C in April, and if this weather stays cold, don’t expect them in May, either.

This dashboard returns the min/max temp forecasts for Kalispell, Spokane, and Boise and acts as our “runoff” tripwire. When we see positive anomalies, watch out. We don’t see those meaning more July-August deferrals.

We mentioned earlier the incremental new hydro energy inside the ISO, this dashboard returns max, min, and average for HL and LL. Looking closer at Average HL:

And that is how we get to our “1700 aMW” number. This is material, and we don’t expect that hydro to back off any time soon, there is now a decent amount of snow in the Sierras.

A couple of modest tweaks to the AC TTC.

BC is a buying machine; the AC’s TTC was cut sharply; flows out of Palo are off (heat in Phoenix), and Mead was a bigger seller into SP.

Weak weekend prices off of declining temps in the South; next week Palo gets hot again, but the rest of the WECC stays either to the cool-side or normal. The Northwest runoff is beginning to show signs of life, but it is still comatose as of this writing.

More on our market thoughts in a later post today.