The fundy takeaway was overall bullishness across the WECC – because the runoff isn’t starting, The coldish weather in the Northwest is keeping the snow in the mountains, and that snow will build this week. The water year in the Northwest is epic, not so inside the ISO, but the ISO’s has improved dramatically. Any new snow creates additional CFS in July, or perhaps August; the single relevant question concerning WY18 is “WHEN.” As in when will it warm up and start the melt. Until that happens, Northwest cash will remain relatively tight given the size of this water year.

In this view, I filtered on Qs for Spreads, Rolls, and On|Offs. Then I sorted on Rank Ascending, which puts the highest ranked ops at the top. I then click through the charts and pulled out a few to discuss.

Chart looks like it should given the size of the Northwest water year. Perhaps it is a bit over-priced, but I’d not short this as it could blow out even higher once the MidC begins its runoff. The big question this year, well every year, is whether or not cash trades single digit in the HL. It’s a given it will in the LL, will it in the HL? If the spread ever had a chance of coming off it would be right now when cash is as tight as it will be for six months; it’s not coming off, and we see no reason to short. 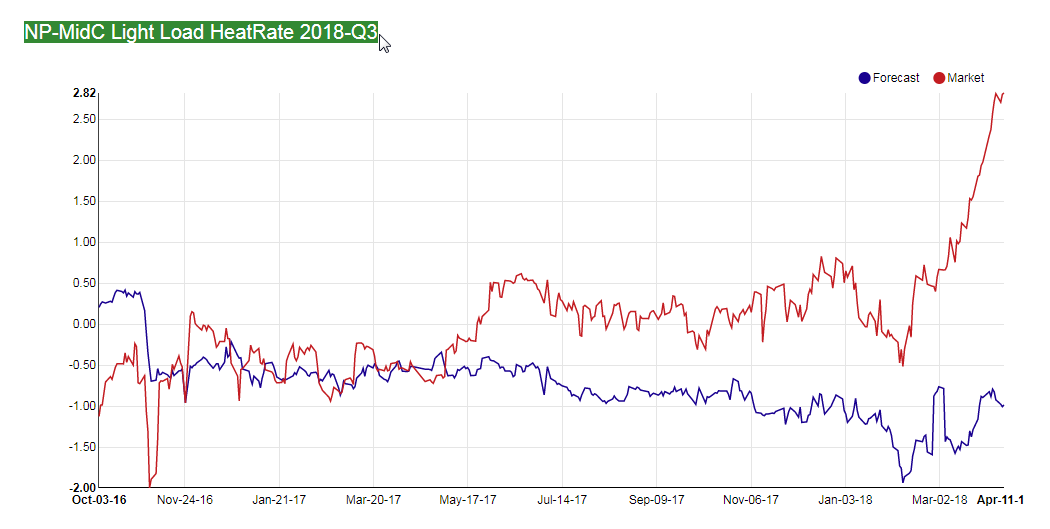 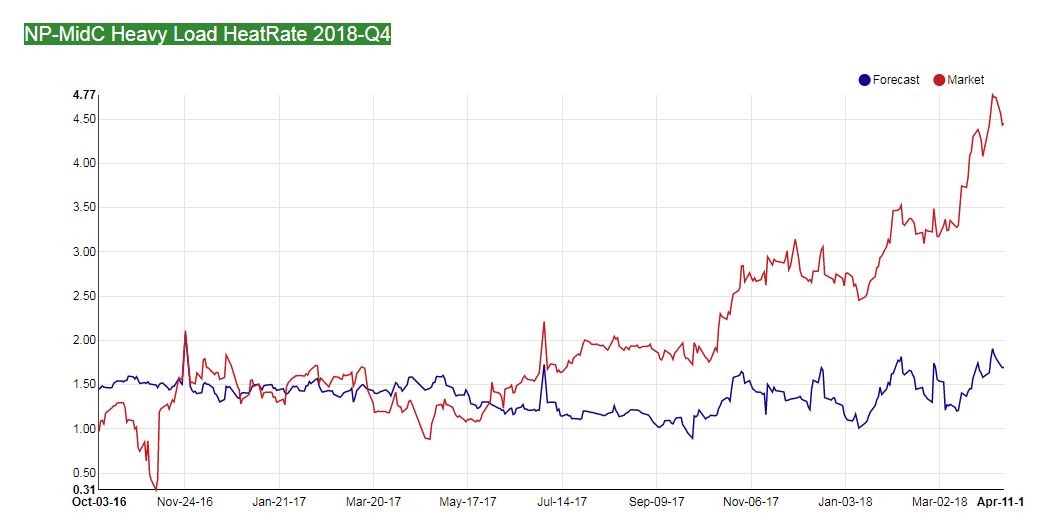 Q4, NP-MidC; this is more interesting, the plots look identical to the Q3, but fundamentally the four behaves not the same as the 3. Very little of this prominent water year will “spill” into Q4, maybe none. The system is too highly regulated, and there will be no snow by mid-August. So why is the four looking like the 3? If you wanted to short a spread, we’d short this over the 3. The problem remains, once the Mid-C melts down (Memorial Day Weekend?) won’t all spreads to MidC blow out? Maybe the time to short these is in about eight weeks? 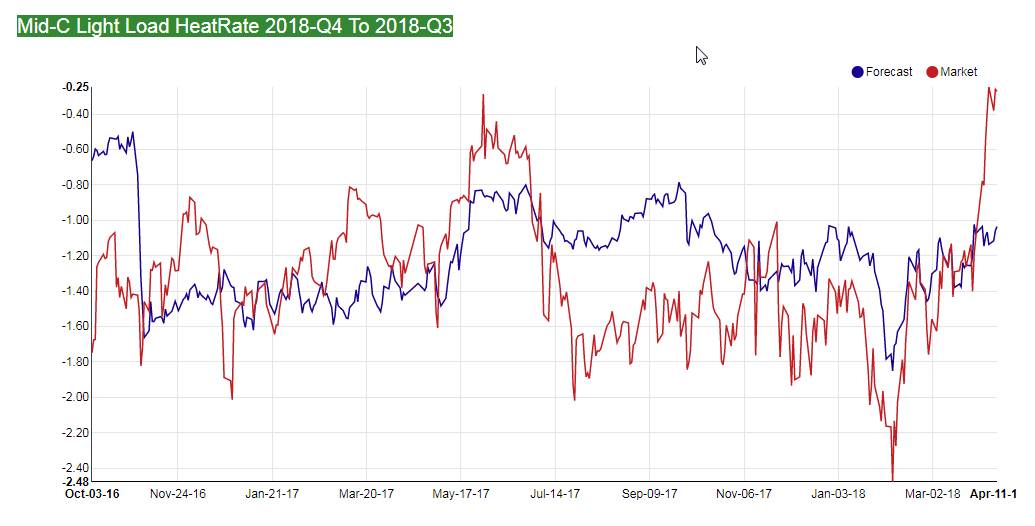 This was the best trade in the curve last Feb, and we pointed it out at that time. A big water year should put the four premium to the 3, but the silly market did just the opposite. Now she’s reversed the errors of her ways and has become so enamored this is approaching “too rich.” We say “approaching” because we fear what happens once Coulee sees 280kcfs inflows and its pond is at 1289. LOL 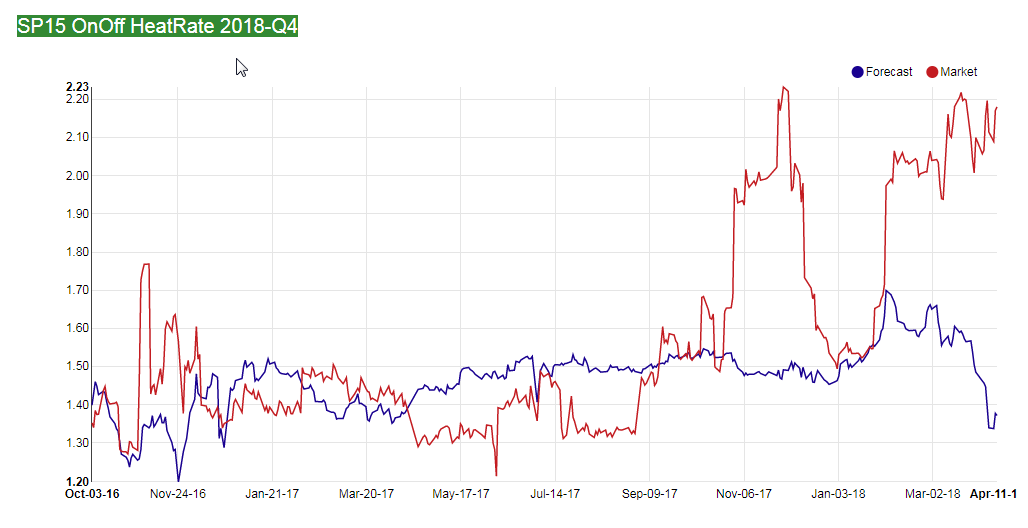 Not sure what’s driving this to such heights, must be gas issues at citygate. Note the premium was first posted around the time TWP blew up, now its back. Don’t understand the logic and wouldn’t waste var trading something I don’t get. Pass. 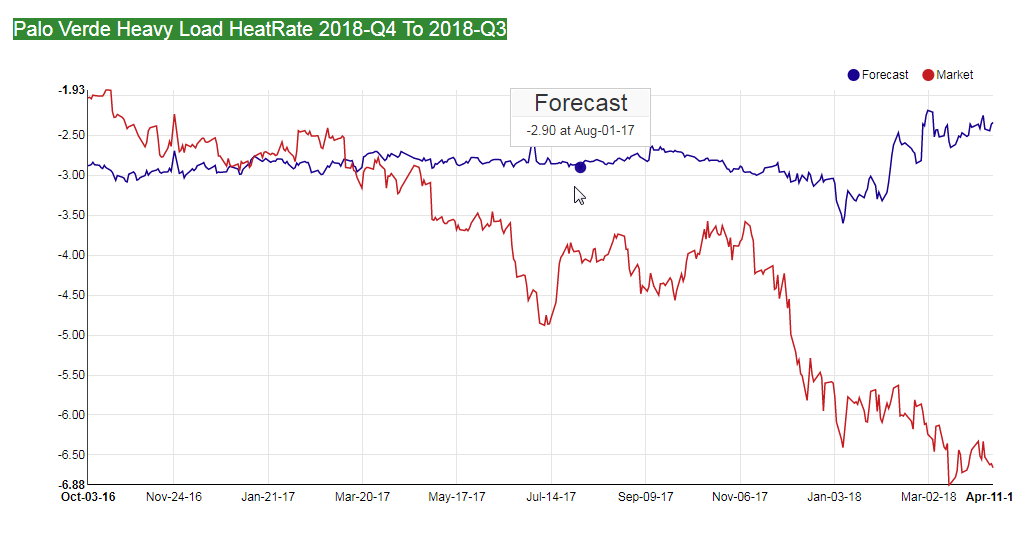 PV, Q4 to 3. Something about Summer 2018 has the market hot and bothered. I’d say this is over-priced, but you’d be tying up VAR from now til Christmas before you got paid. Unless the southwest has a cool summer and cash goes nowhere. In that scenario, you’d get paid around Aug. 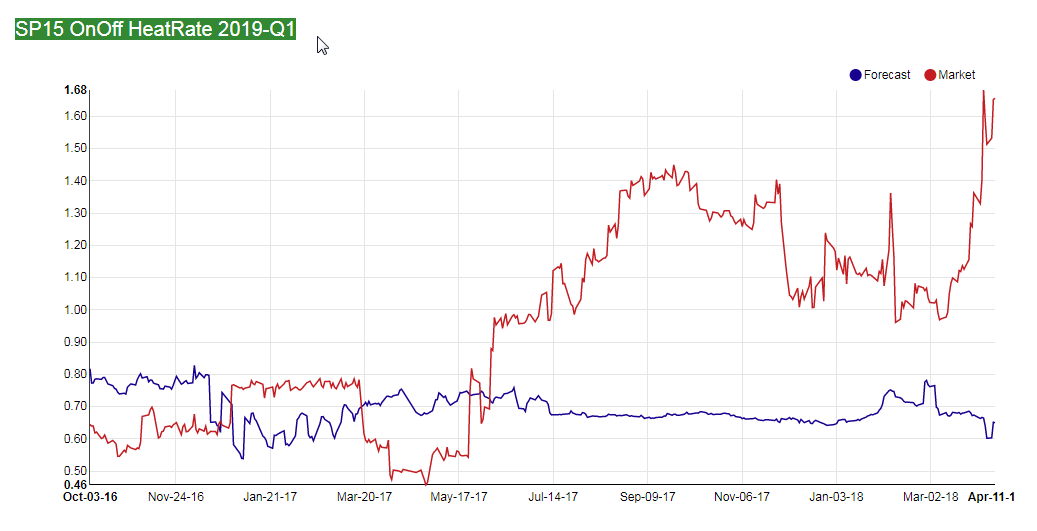 This also is most likely citygate driven; why else would an On|Off double in value in a month, on a Q that is 270 days from delivery? The only way the buyer makes money on this is if SCG runs out of gas next winter, but that’s so far out that I’d be comfortable selling this today. 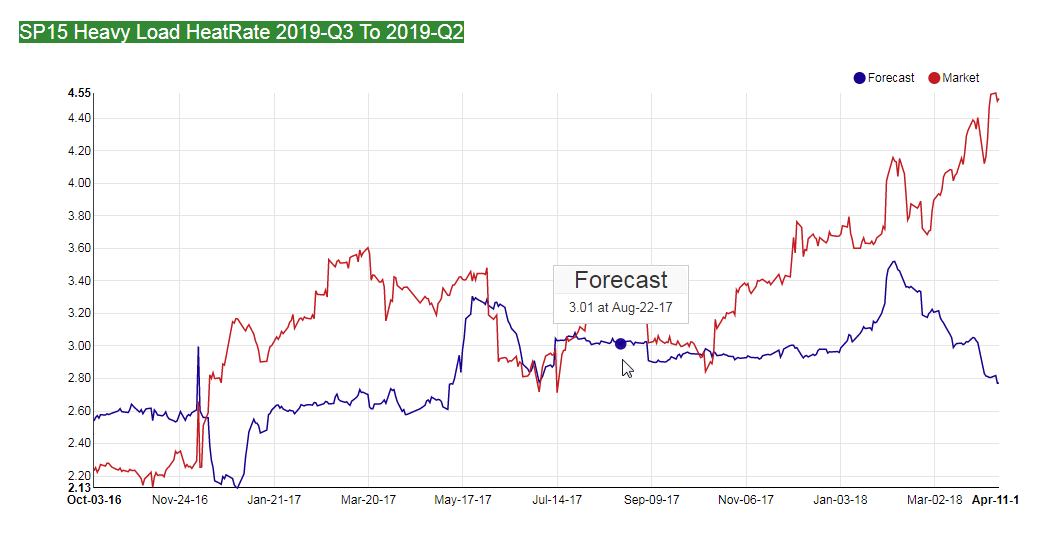 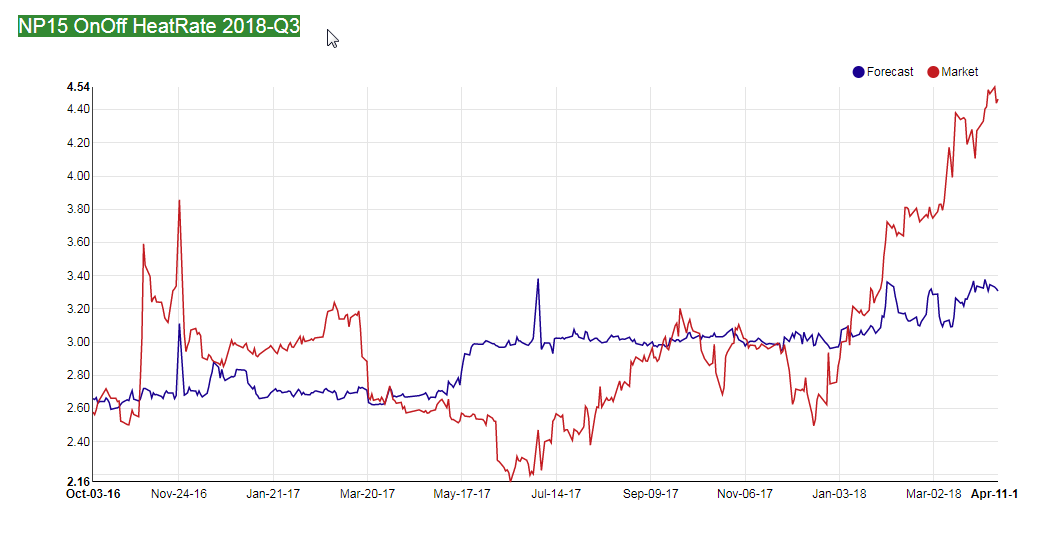 All things three,  short at your peril. 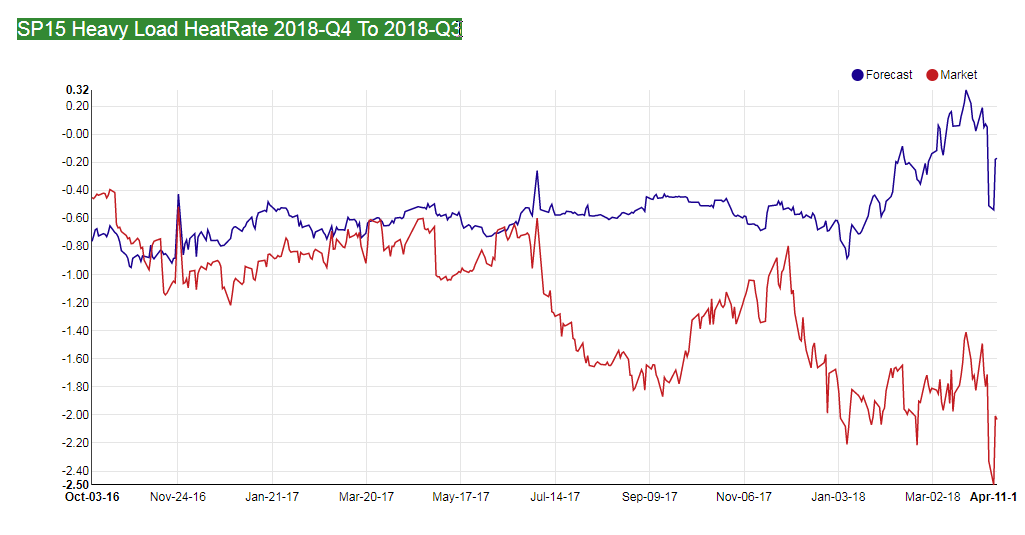 Same, if it hits that low again, sell it. 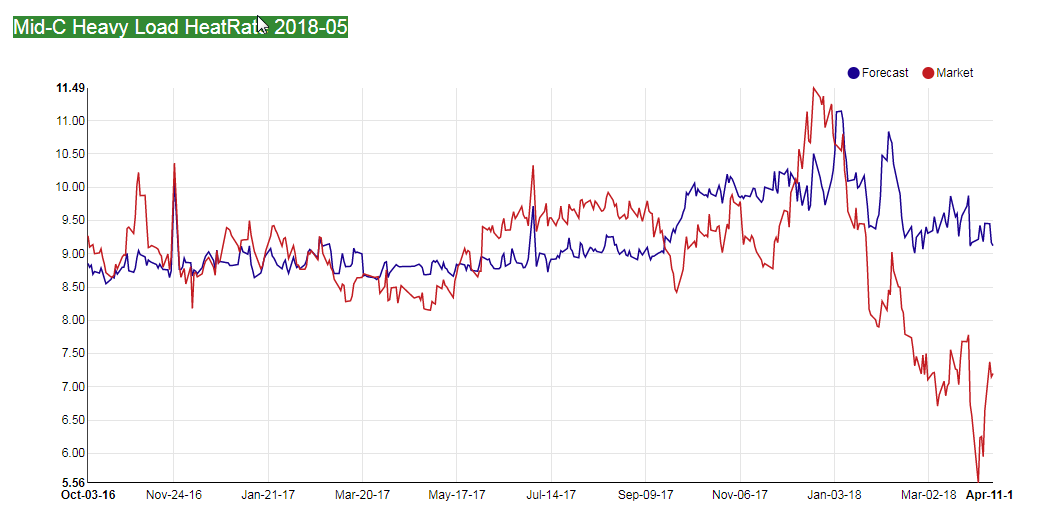 Nice rally for May and we’d be tempted to cover some length, but won’t.  As long as the temperature outlook remains normal to below, we’d stay long the May. It is cold, and we’ll stay long. The risk is a fast-changing temp forecast won’t leave us time to get out, but the upside in owning May below the cheapest gas unit is substantial.

June rallied too, but it shouldn’t have. Whatever is bullish for May is bearish for June. Deferred May melt means increased June-August melt. Let’s look at the roll: 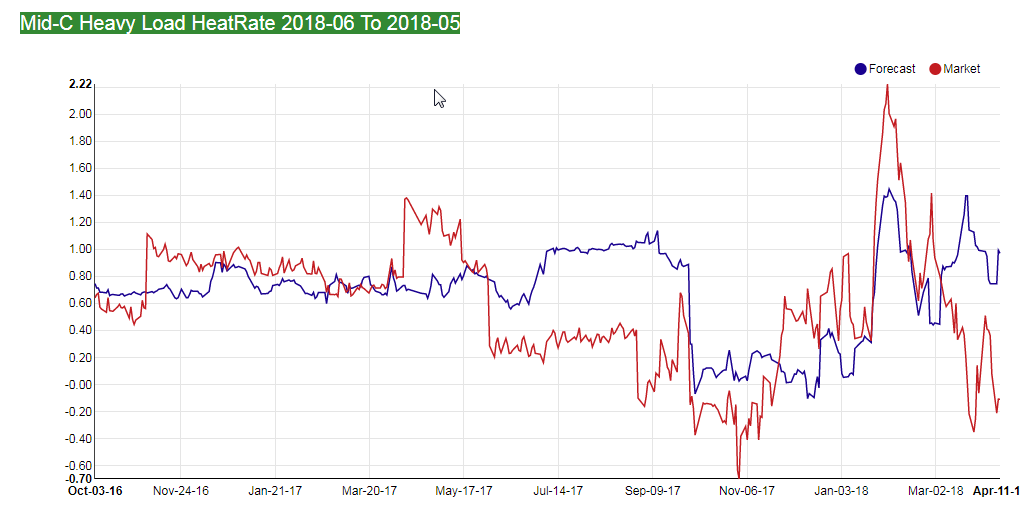 This confirms our feelings – we’d stay long the May and start hedging out some of that length by selling some June. 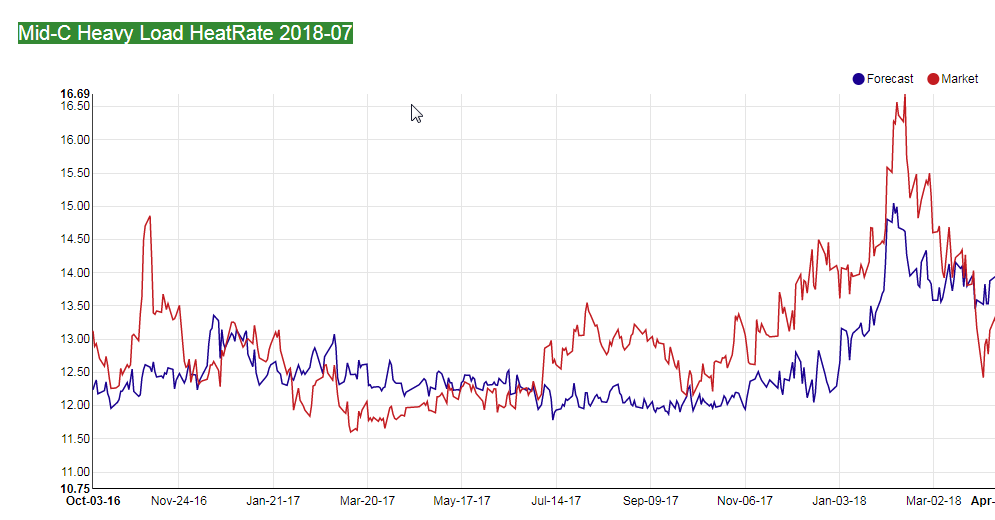 We’d sell some July, too. That bullet grows ever more bearish with each passing cold day, plus we’re looking at big SWE builds next week. 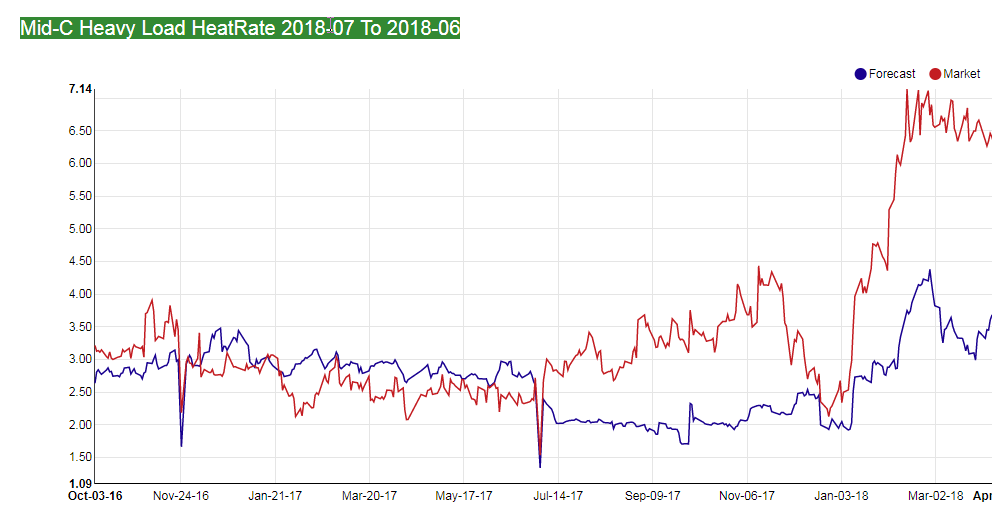 July or June to short? I’d short the July before the June, just because it has further to fall and there is an outside shot that the Northwest remains coldish through much of May. At some point, June starts to rally in sympathy with cash. That is a longshot scenario, but odds aren’t zero. 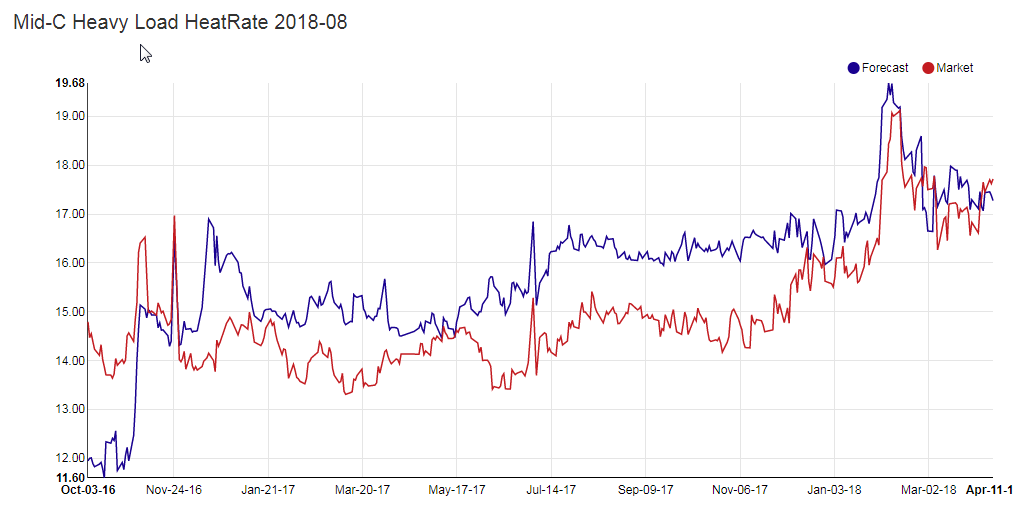 Aug shouldn’t be getting the free pass, but it is. We’d sell this, too.

Aug vs. July, we’d rather be short July, but if this roll rallies much more, we’d sell it, too. 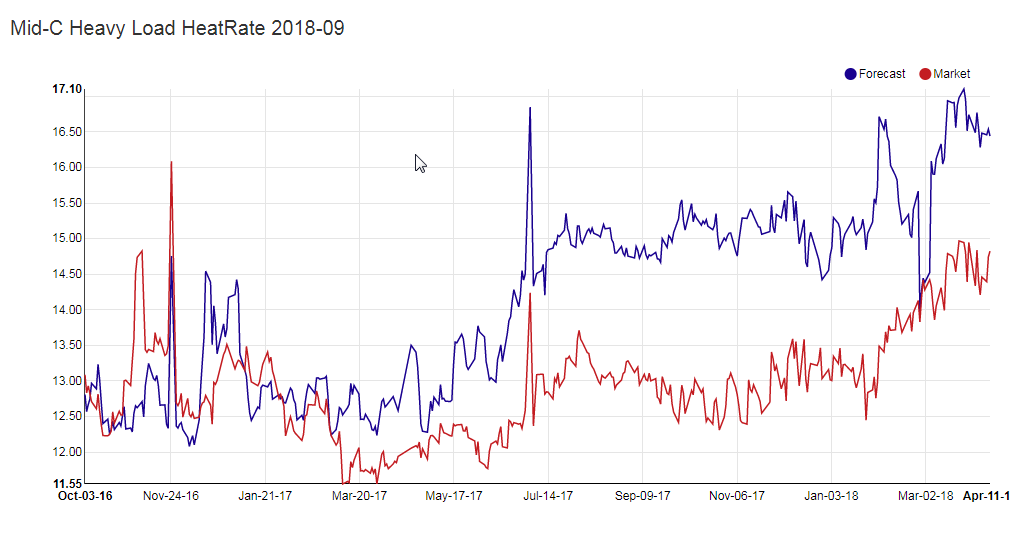 Sep won’t be impacted much by even this massive anomalies; it is too deep into Summer, there just won’t be any snow left to melt. However, Sep will look vulnerable trading at 15k heat rates if cash is trading at $5.00/mwh. All things MidC will get pummeled, including Sep. Given that this has never come off, I’d say it is a short candidate as well as Aug and July. 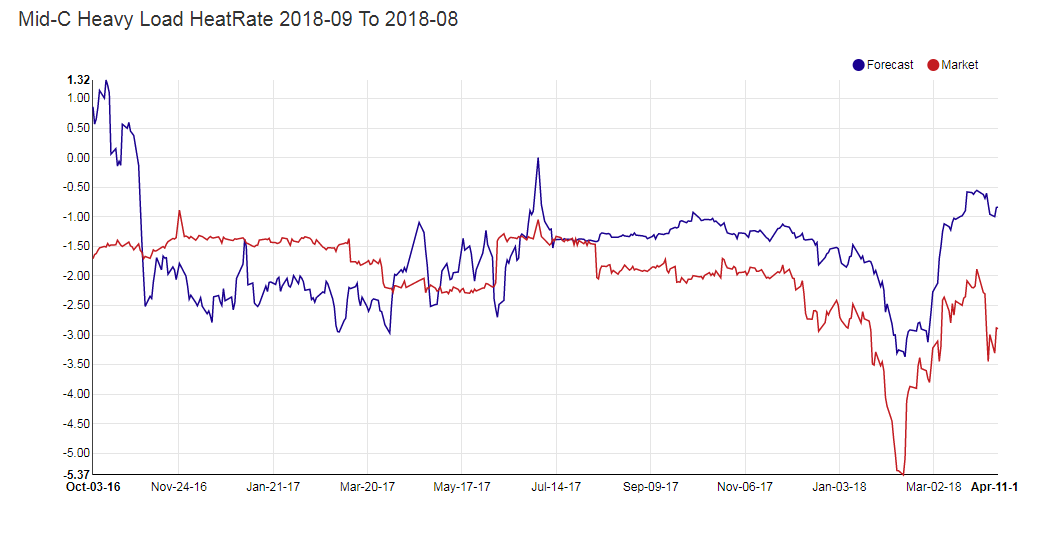 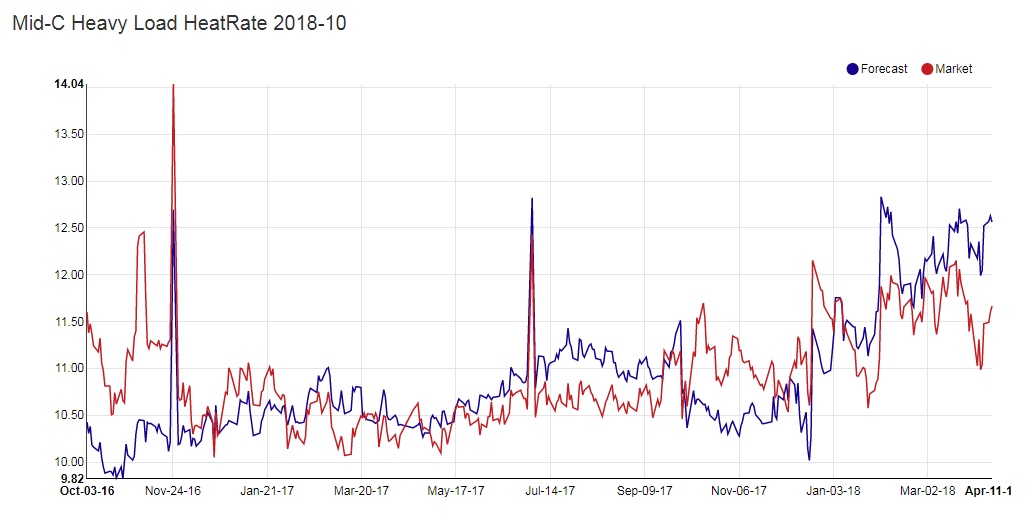 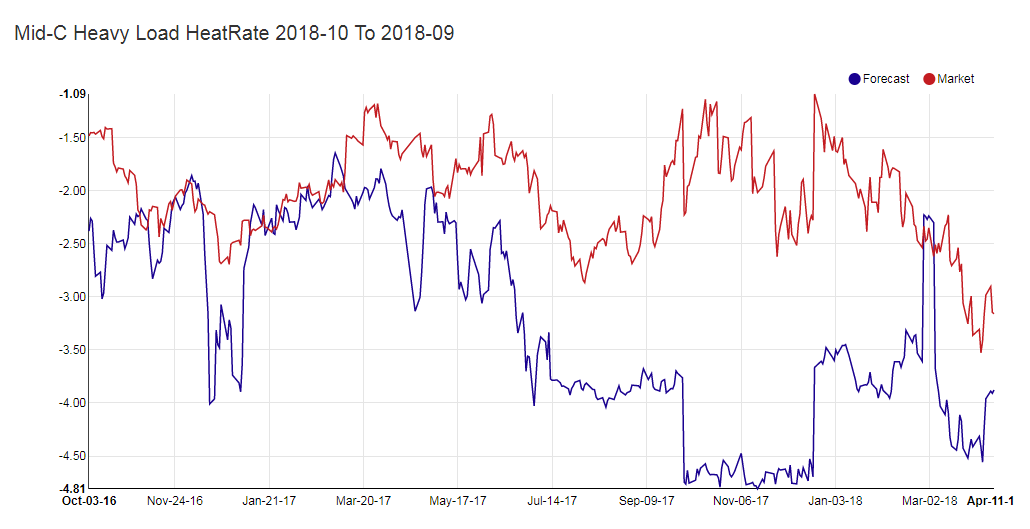