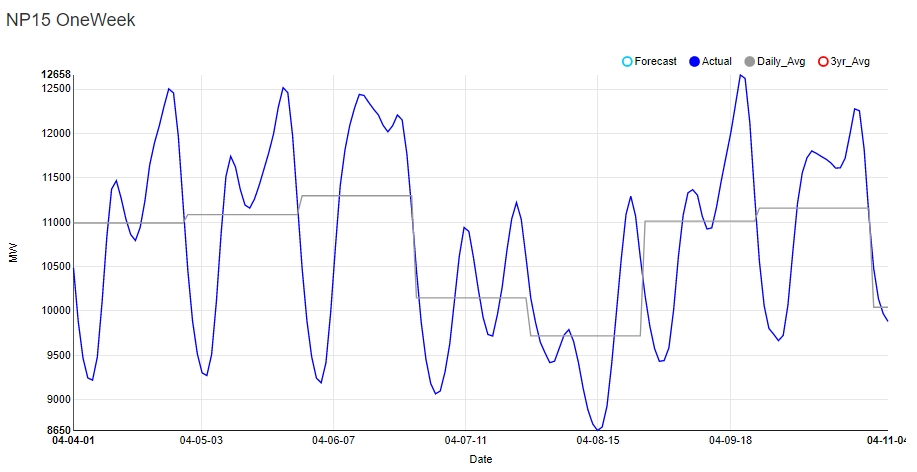 Peak demand dropped nearly 400 MW day-on-day yesterday while midday demand jumped nearly 700 MW.  Aggregate those and you get a daily average that increased 140 MW.  The daily average was up 160 MW week-on-week as well. 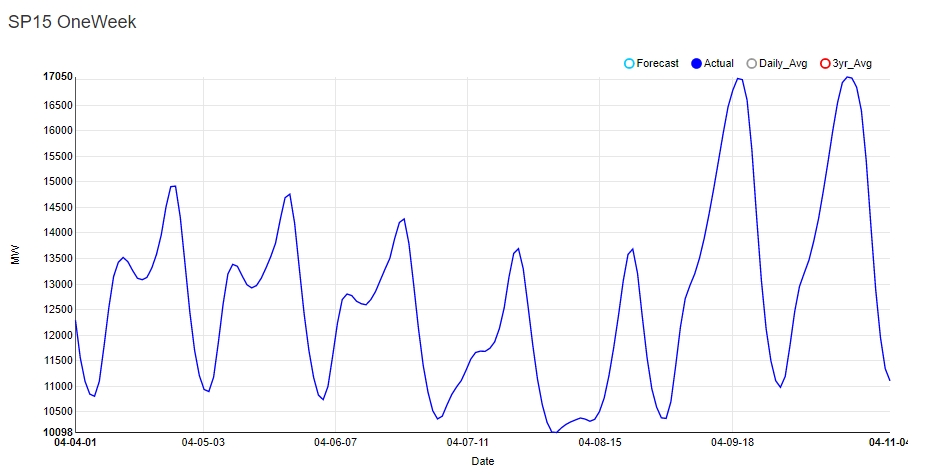 90+ degree days made its toll on demand as the hourly peak reached above 17,000 MW two days in a row, enough for a week-on-week increase of 2,100 MW.  Off peak loads increased yesterday as well, causing the daily average to jump 400 MW day-on-day despite a similar daily high. 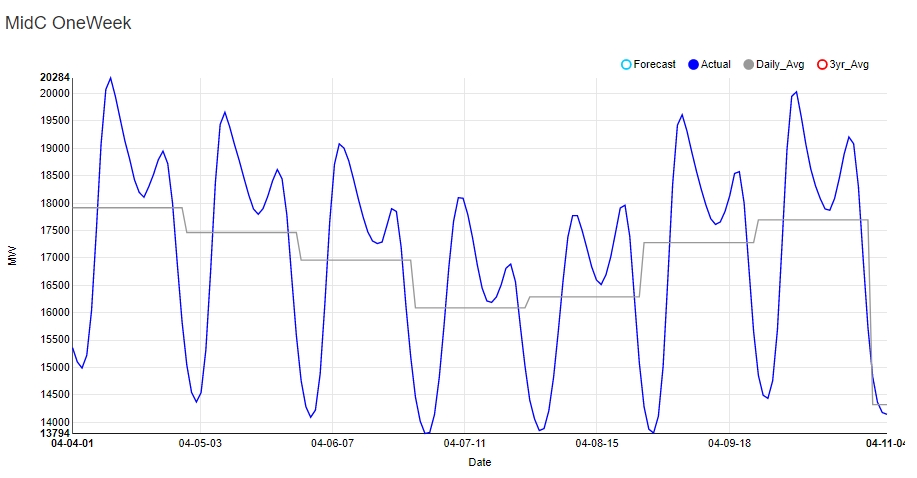 Mid-C demand increased its daily average for the third consecutive day, bringing the total to 17,693 MW, an increase of more than 400 MW day-on-day.  The daily high jumped 420 MW yesterday as well. 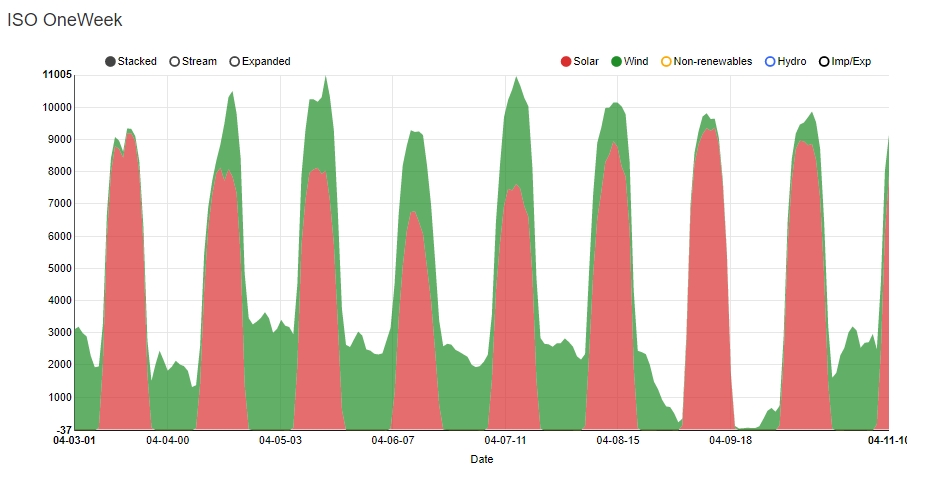 Solar generation peaked at 8,964 MW yesterday, down 390 MW from Monday, but still the second-highest hour in the past week.  Wind generation added another 662 MW in the same hour as the two sources combined for a renewable total of 9,626 MW.  Of-hours wind generation rebounded last night after peaking at 3,227 MW. 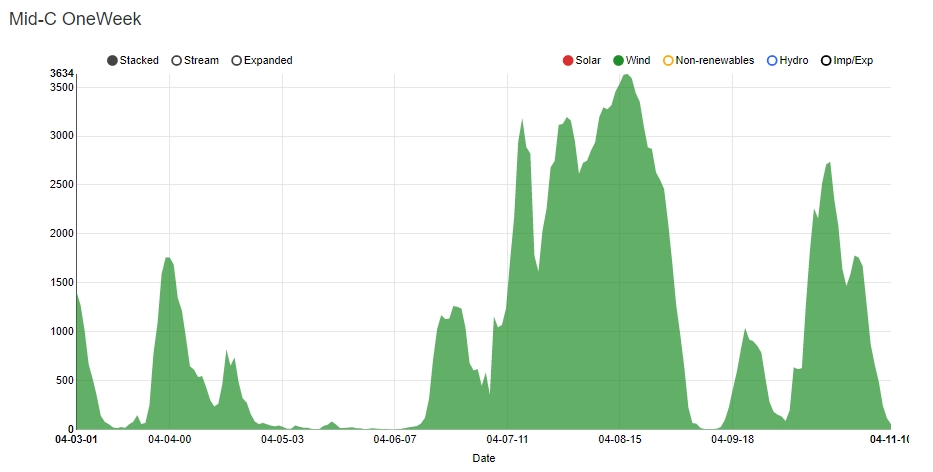 Mid-C wind saw a rebound yesterday as well as wind generation peaked at 2,737 MW in the early evening hours.

Worth noting a new solar plant plan was unveiled for Eastern Washington within the past couple days.  It’s just 28 MW but would be the largest for the state.

This week’s heat in Southern California appears short-lived as SP projects below-normal aside from San Diego’s 1.22 degree anomaly.  Denver checks in as the only other hub with above-average aggregate temps.  NP has some of the largest cool anomalies, especially as you move inland as Vacaville and Livermore show -5.47 and -4.32 degrees respectively.

San Jose is projected two degrees below normal at 66 today and will fall to 61 tomorrow, eight below normal.  There may be a moderate warm up over the weekend as temps are projected to reach 75, but the remainder of the forecast looks fairly average.

Much larger anomaly in Sacramento today as the high is expected to reach just 62, eight below normal, and stay at that level tomorrow as well.  We could see a high of 75 on the 14th before again dropping back into the low 60’s.  Temps will mostly stay within the normal range thereafter, though the normal line is steadily growing, moving from 70 today to 76 by May 2nd.

Massive swings in daily highs in store for Phoenix as today is expected to reach 98 (14 above normal), then follow that up with a high of just 77 on Friday, eight below normal.  We’ll see highs oscillate above and below normal until the 19th when temps stay above normal for most of the remaining days of April.

This mild spring isn’t going anywhere in the near future as just a handful of days look to top average in Seattle.  Today falls five degrees below normal and drops even further by Friday at just 52 degrees.  63 looks like the high-water mark for the near future — April 22nd.

Portland reaches just 52 degrees for both today and tomorrow, equivalent to eight degrees below normal.  Portland has even less above-normal days in the forecast compared to Seattle.  Zero days above normal to be exact.

Spokane’s forecast took a hit next week, falling as many as seven degrees from yesterday’s forecast as highs struggle to rise above 50.  Just one day is forecasted with a high in the 60’s through the end of the month (21st).

Denver will move from a high of 77 today to just 43 on Friday.  That’s a +14 anomaly to -20 in just two days.  Temps rebound quickly with a high of 76 on the 16th followed by more less-wild swings in highs to finish off the month.

Salt Lake looks like a less drastic version of Denver’s forecast as today is set for a high of 70 followed by Friday’s high of just 49.  Today shows the only 70-degree day for the rest of the month, though May has signs of warmer temps.

The forecast calls for increases through Saturday before a two day decline, followed up by increases through net Wednesday.  Nothing extreme in either direction, but it looks like a wave pattern is on the horizon, at least for the next ten days.

Spokane’s mild to cool spring has allowed snow to continue falling in the mountains and staved the runoff for later in the year.  Those two factors combined have left us with the above chart and the Spokane basin with the 4th-highest snowpack in the past 11 years for April 11th.