April got the first true massive increase in some time after seeing 2,679 aMW tacked on to this week’s forecast.  This also marks the end of several straight weeks of forgettable changes to April’s forecast.  May tacked on another 601 aMW and continued the trend of consecutive increases.  June pushed 586 aMW north and now sits at the highest point in over a month.  July ended the bleeding by increasing 800 aMW as the month’s forecast finally extends through all 31 days.

April began to see serious gains on the 7th with the peak coming on the 12th at more than 4,200 aMW in gains.  The increase stayed above 3,000 for most of the remaining days of April.  May carried some of that momentum until the end of the first week, then kept a more subdued gain over last week’s forecast through the 31st.  June began the month trading off increases and decreases until the 3rd week of the month where a considerable bump could be seen.  July maintained that bump through the month as well. 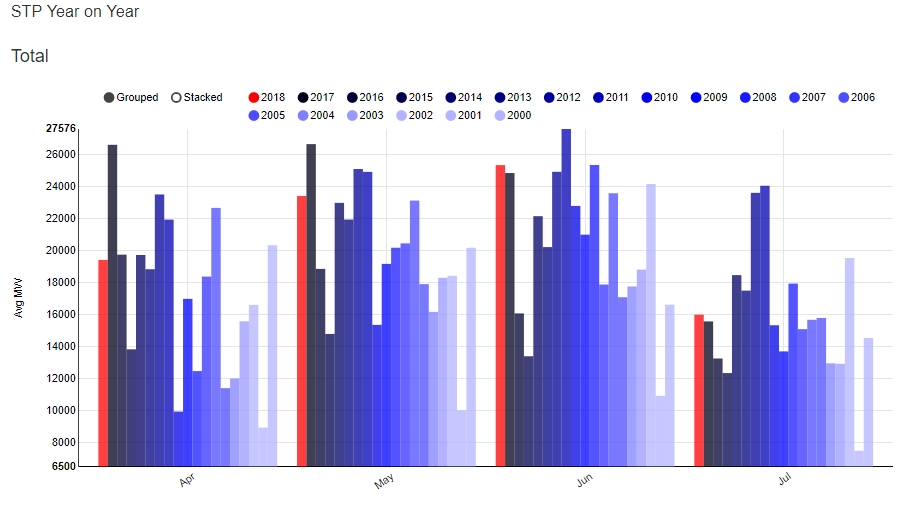 April’s boost inched it closer to 2016 and 2014, though it still falls short.  The bump was enough to rise well above average however.  With another increase to June 2018 is pacing above last year and now only trails 2011 and is in a near tie with 2008 (7 aMW difference).