It’s officially April, the water year is mostly a lock yet is still growing and the cool weather shows no signs of abating in the North while Palo tests the mid-90s. The ISO is mired in no-man’s land and has more precip on the way. Let’s look closer.

The LMP DA markets are up, week-on-week, and notable for little congestion between anywhere and SP.

Socal Citygate posted a premium to PG&E citygate, and check out the Stanfield collapse, nearly $0.25, or about 10%. The gas traders fear the significant snow, but there is nothing to fear for the next fourteen days, beyond that there is plenty of worries. 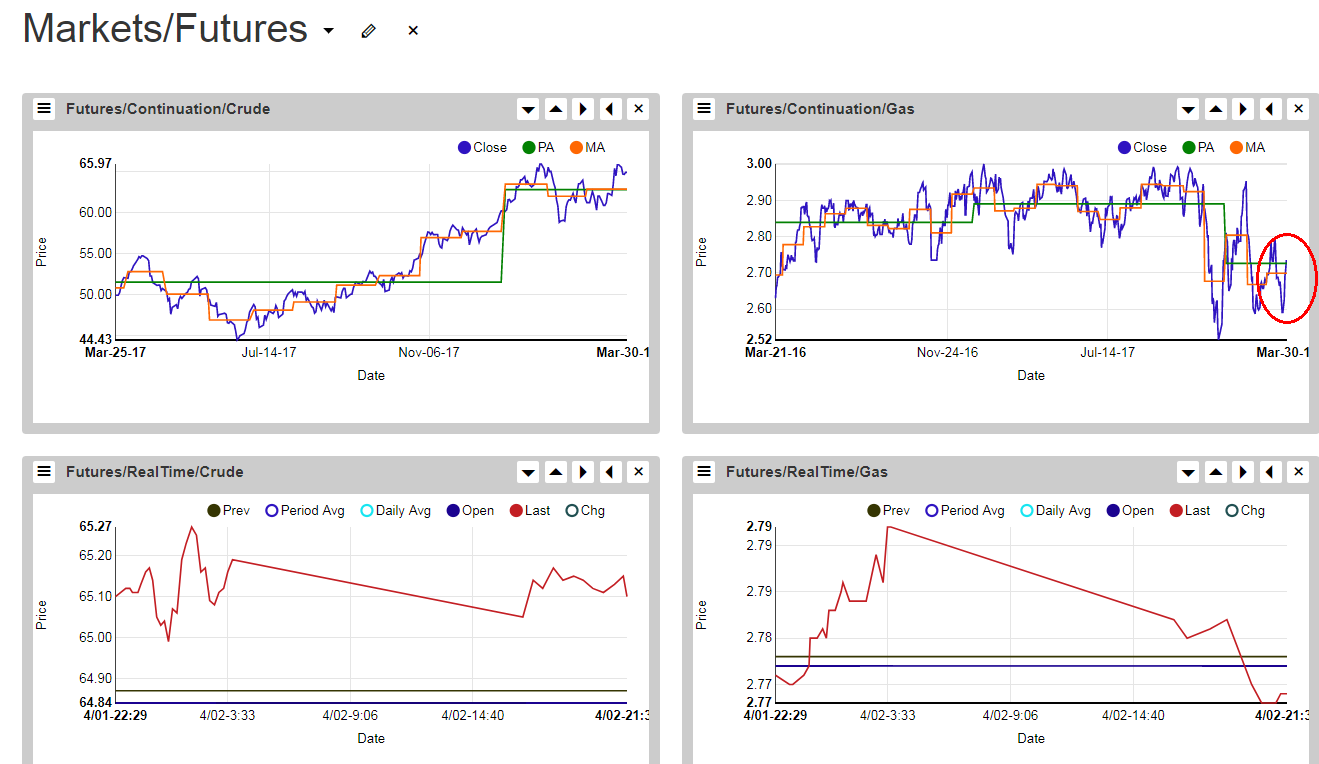 Nymex natty had a sharp rally at week’s end, though little of that spilled into cash. 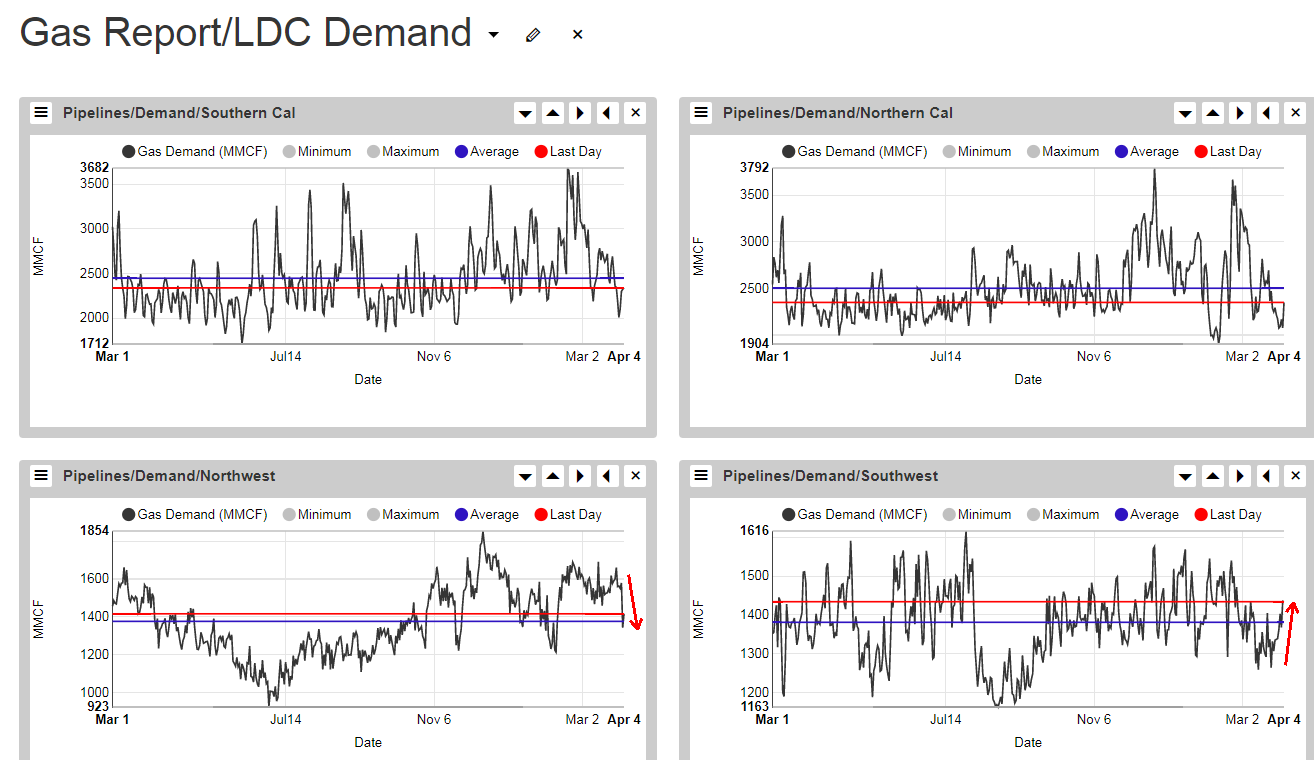 The Ansergy LDC Demand INdex is off everywhere but the Southwest. The latter rally is power plant driven off of the 90s posted in Phoenix over the weekend. The Northwest is poised for a total collapse in demand, once it warms up.

PG&E enjoyed an additional 250 MMCF off GTNW, that rally was driven by the Northwest’s collapsing demand. Also, take note of the state’s weak storage, PG&E is off 14 BCF from last year and 26 from prior years. Socal is a disaster; none of that matters for the next six months, but the hole in PG&E will need to be filled putting constant pressure on citygate. 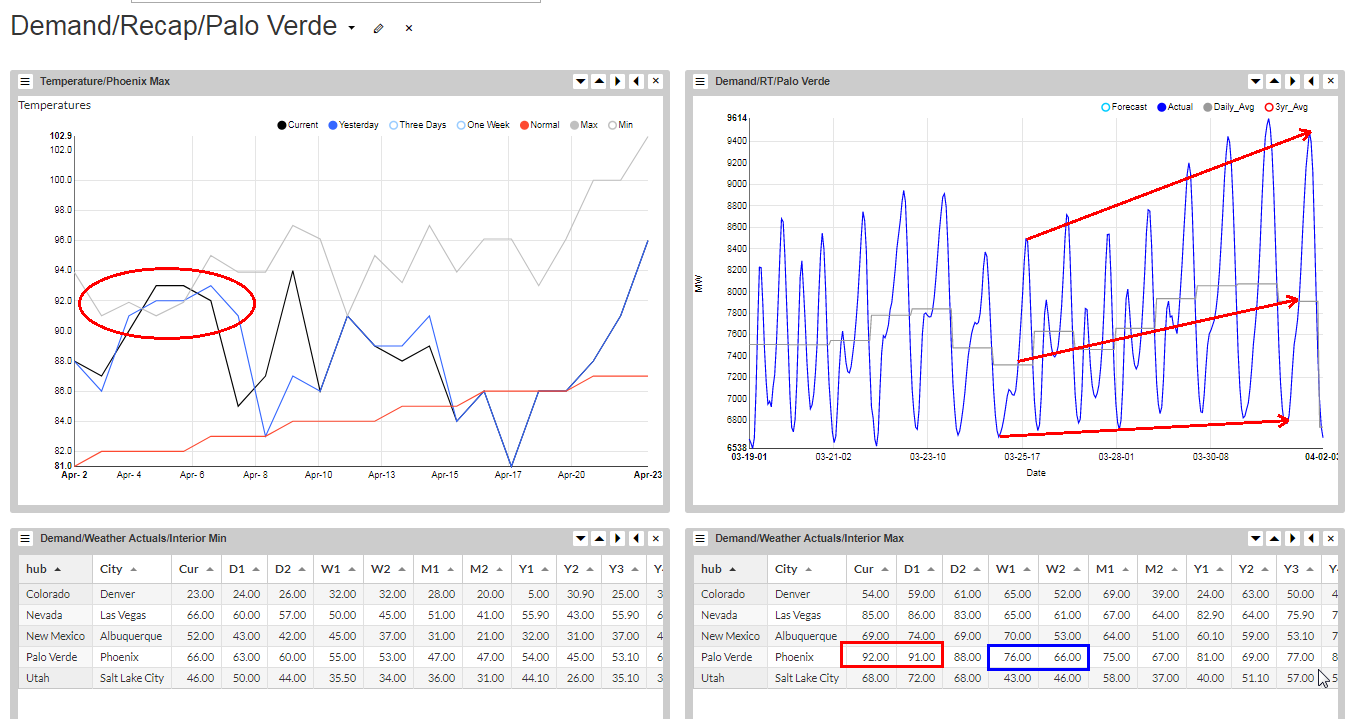 Palo saw a sharp rally in demand, week-on-week, off of warm weather which is growing even warmer. Ten Year highs may be set later this week. 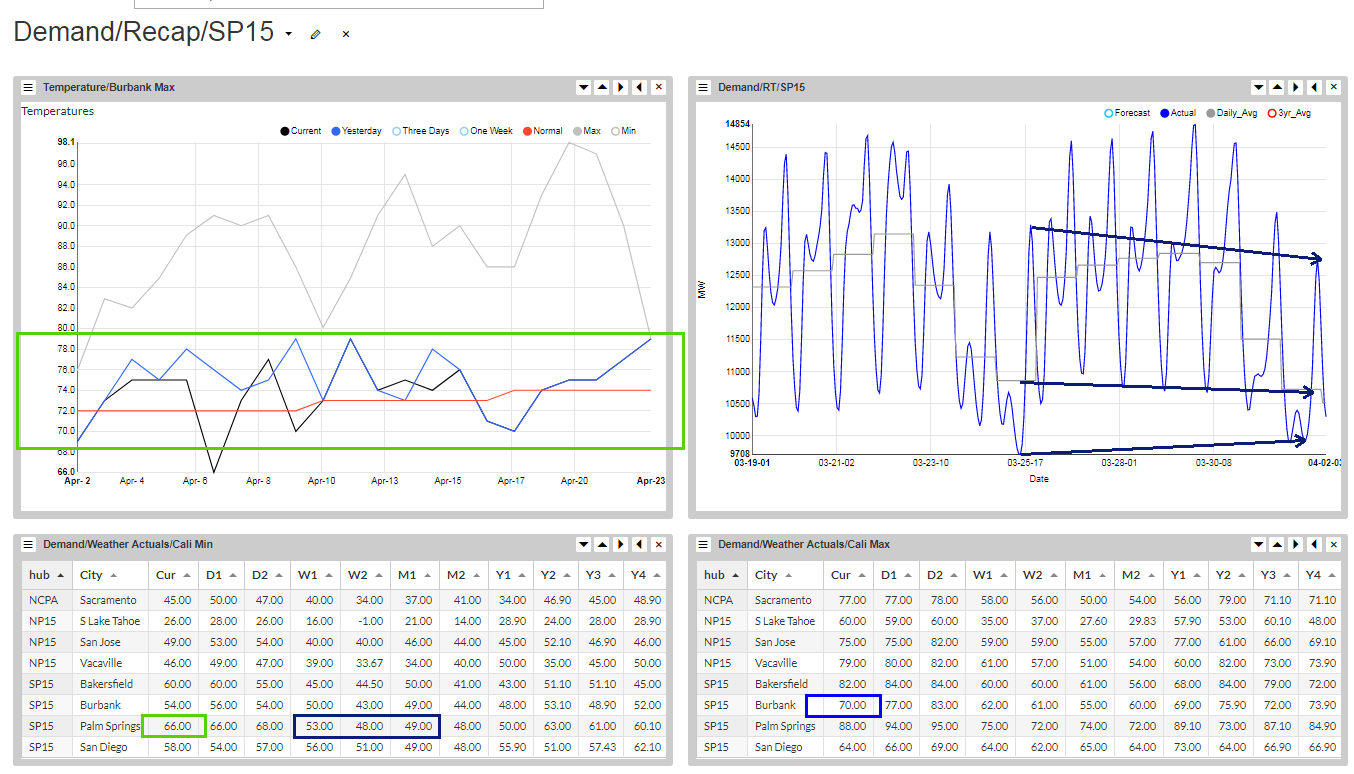 Not happening at SP; loads are sideways to down and temperatures show no sign of life in the near horizon; last year Burbank had posted several days in the 80s, not this year. 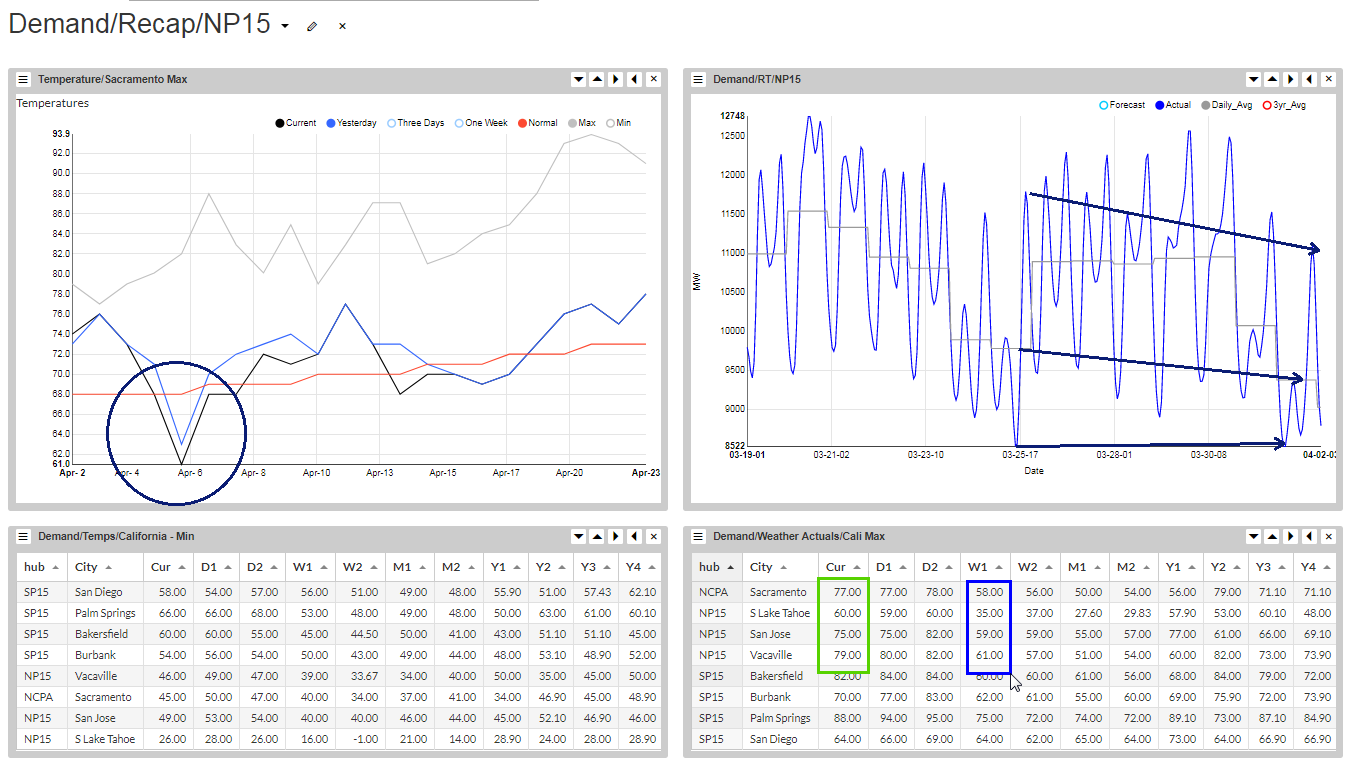 Even uglier at NP15; loads are at the annual bottoms and, like SP, there is nothing on the near horizon to drive a rally; if anything, the hub will grow even more bearish off of rallying hydro. 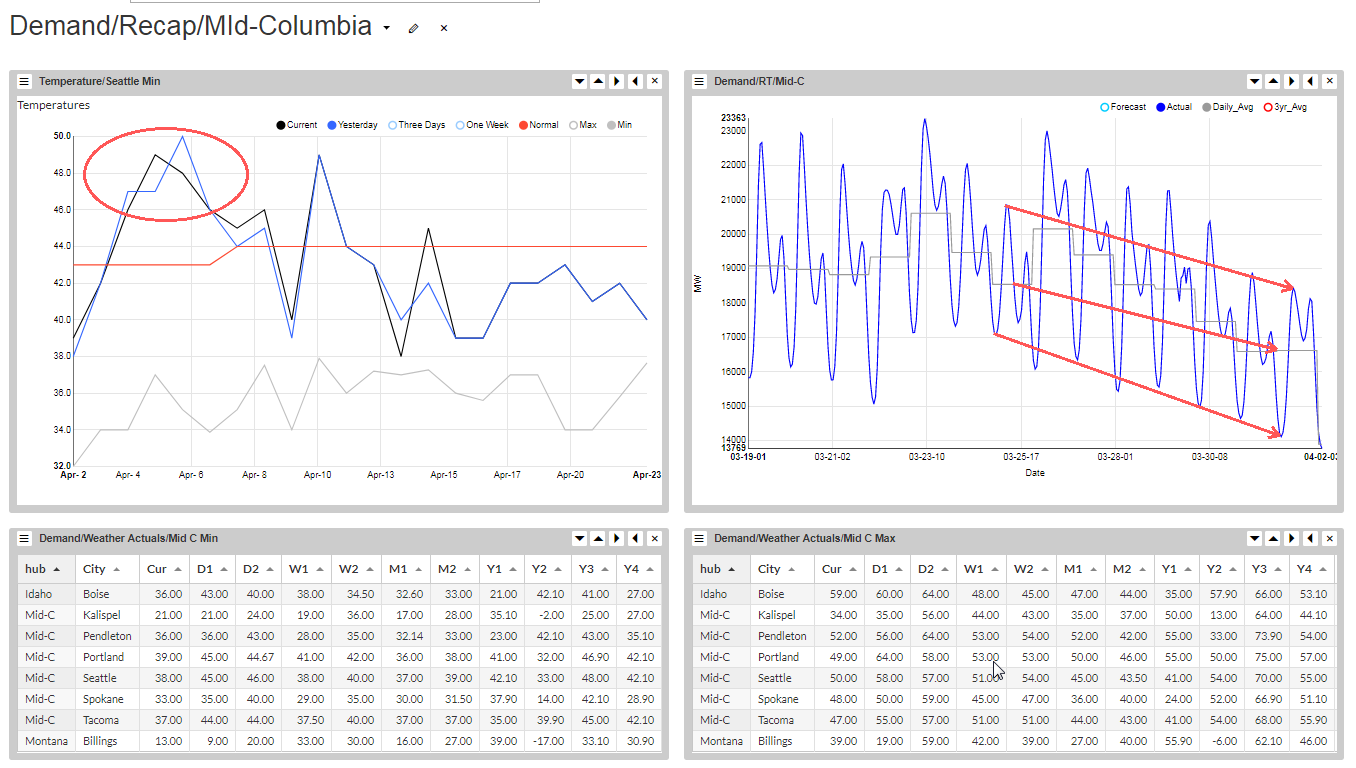 Mid-C’s loads tanked, too. Granted yesterday was a holiday, but the warm weather is the main culprit, and it gets even warmer later this week. That said, it is not warm enough to fire up the freshets:

These three stations are the ones we are more obsessed with than either Portland or Seattle. Both Kalispell and Spokane are either average or below normal; only Boise shows some positive anomalies and those are just in the Mins. No, the freshet isn’t starting just yet, not for a few more weeks which will take you halfway through BOM. 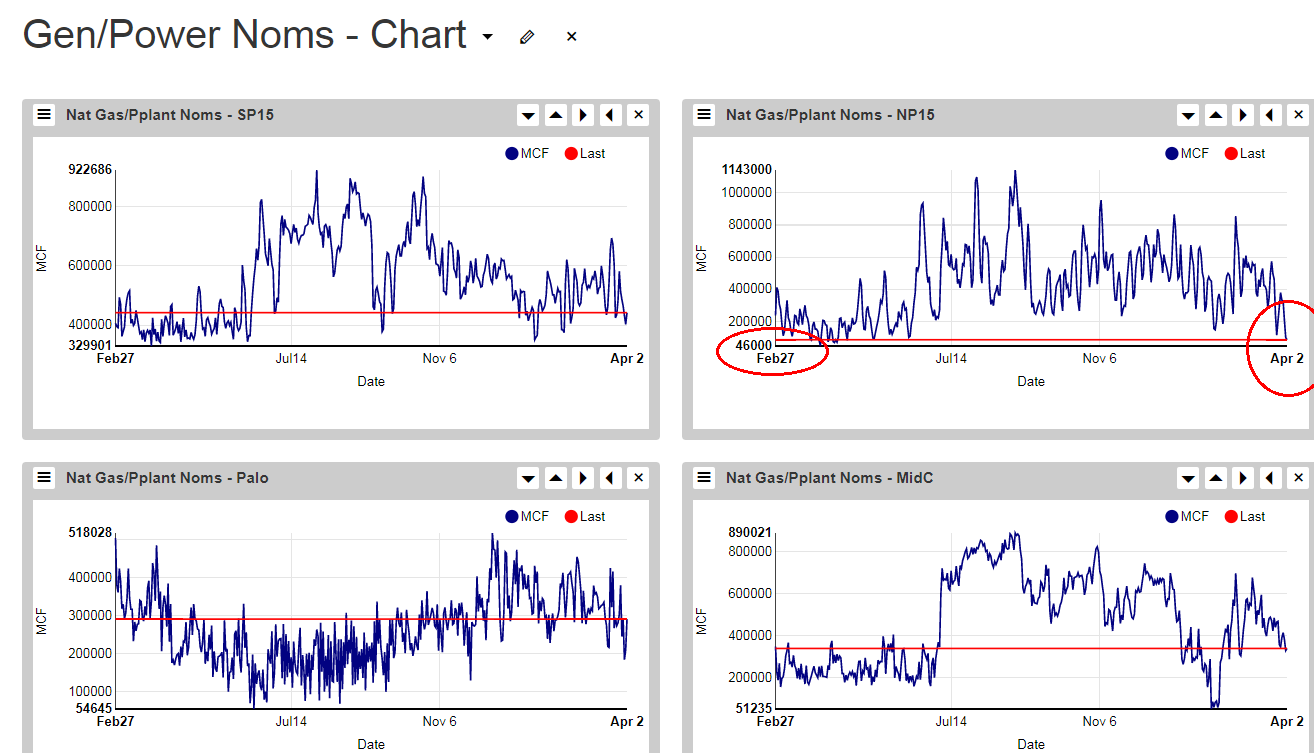 Power noms inside the ISO are near seasonal lows; they hit a 12 month low at NP over the weekend. The Northwest’s remain remarkably strong, but it’s only a matter of time before that region has next to no gas online. We’d suggest not for another couple of weeks, at the earliest.

Renewables were more bearish than not, lots of wind across the WECC. All the Nukes are running, too. 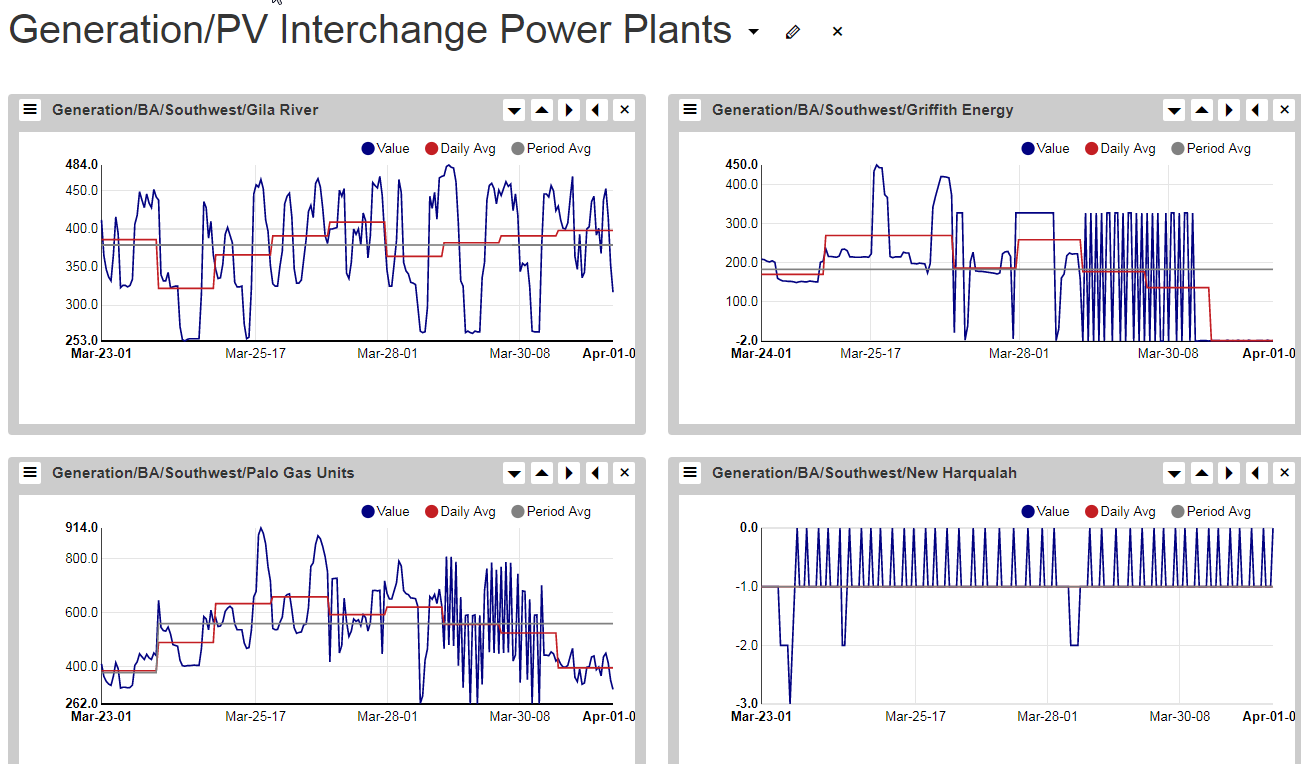 Griffith returned to standby status after running most of last week, that is surprising given the load rally and the 90s. New Harqualah is just sitting there; I guess waiting for the 100s.

NOAA has the west wet, the station level data agrees.

The stations above Coulee are poised to get the most significant storm in the last eight weeks. This new precip, coupled with cold weather, will bury the mountains in new snow and the anomalies (SWE) are going to shoot off the chart. Usually, snow is melting, not building, at this time of year. More on that later.

Even Kally is getting pounded, again. Where but six weeks ago the ISO was staring at a disaster, now it may even get close to normal which bodes bearish at NP sometime this spring. 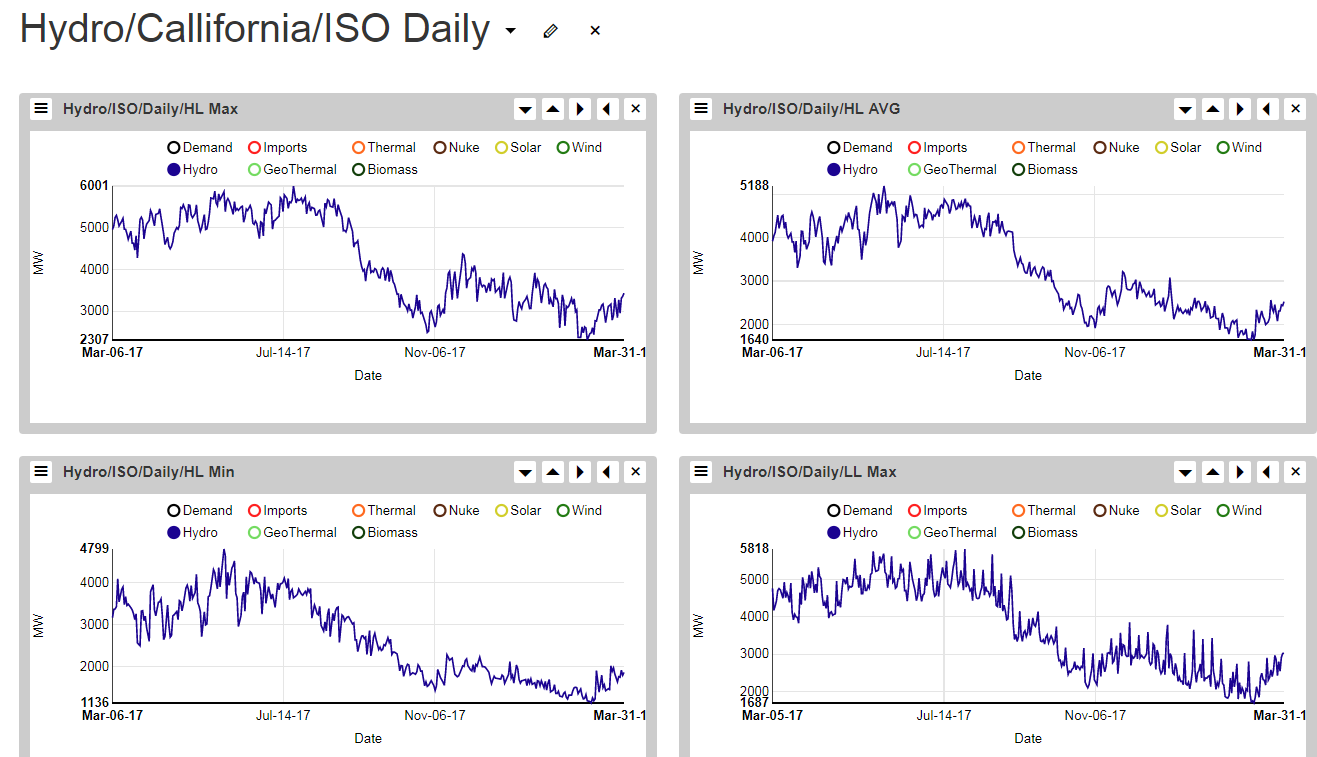 Total hydro energy production inside the ISO has not backed down; now with the new rain, we’d expect another bump over the next week.

Next week the COE releases its April Flood Control guidance; in the past, we were indifferent about this release, but now we are growing more bearish off of building water supply: 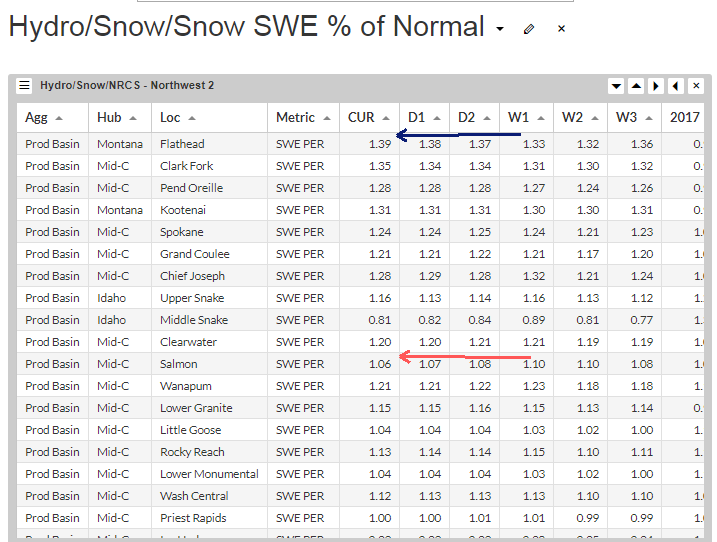 Somehow, the Flathead posted a 6% rally in SWE anomalies, and this is without much precip. With Kalispell set to receive over an inch during chilly days, these anomalies are going to gap into the 140s, maybe 150s.

The COE uses the April-August period to set its draft; those forecasts are gapping, too. The RFC jacked its number 6% in the last few days, now TDA is at 119%. 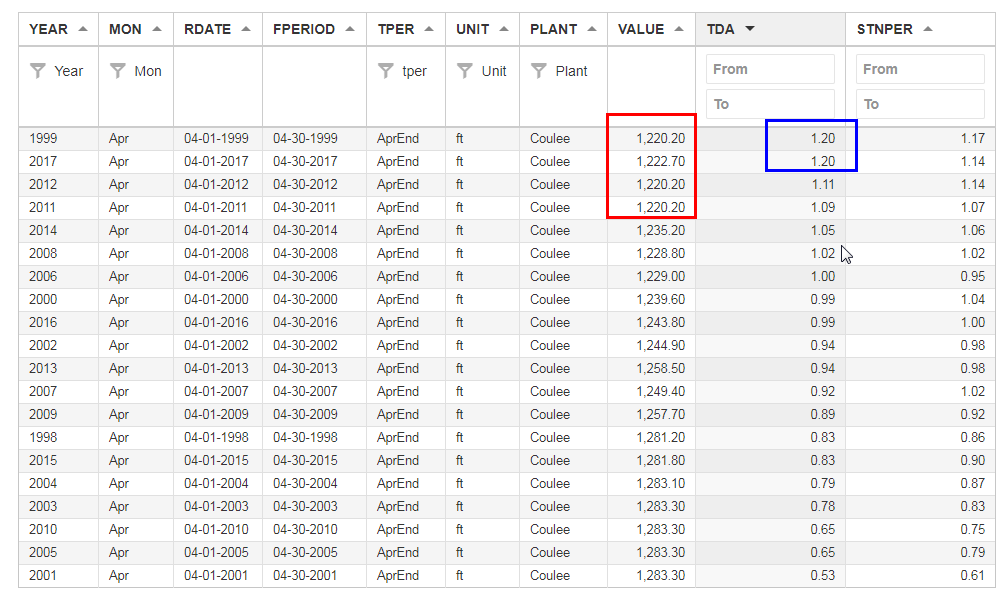 Using past April releases as a guide, we can expect the new draft at GCL to be like last year, 1220, or another 8 feet from last month’s target. That is bearish April and bullish June, but all this extra water is bearish June, July, and now even August. We still think BOM remains safe, it isn’t going to break out, but it won’t collapse, either. The water is too tight, the degree days too many, at least that is true as of today.

And even less of a deal now that Arrow backed down to a miserly 20kcfs discharge. Today the spill season commences: 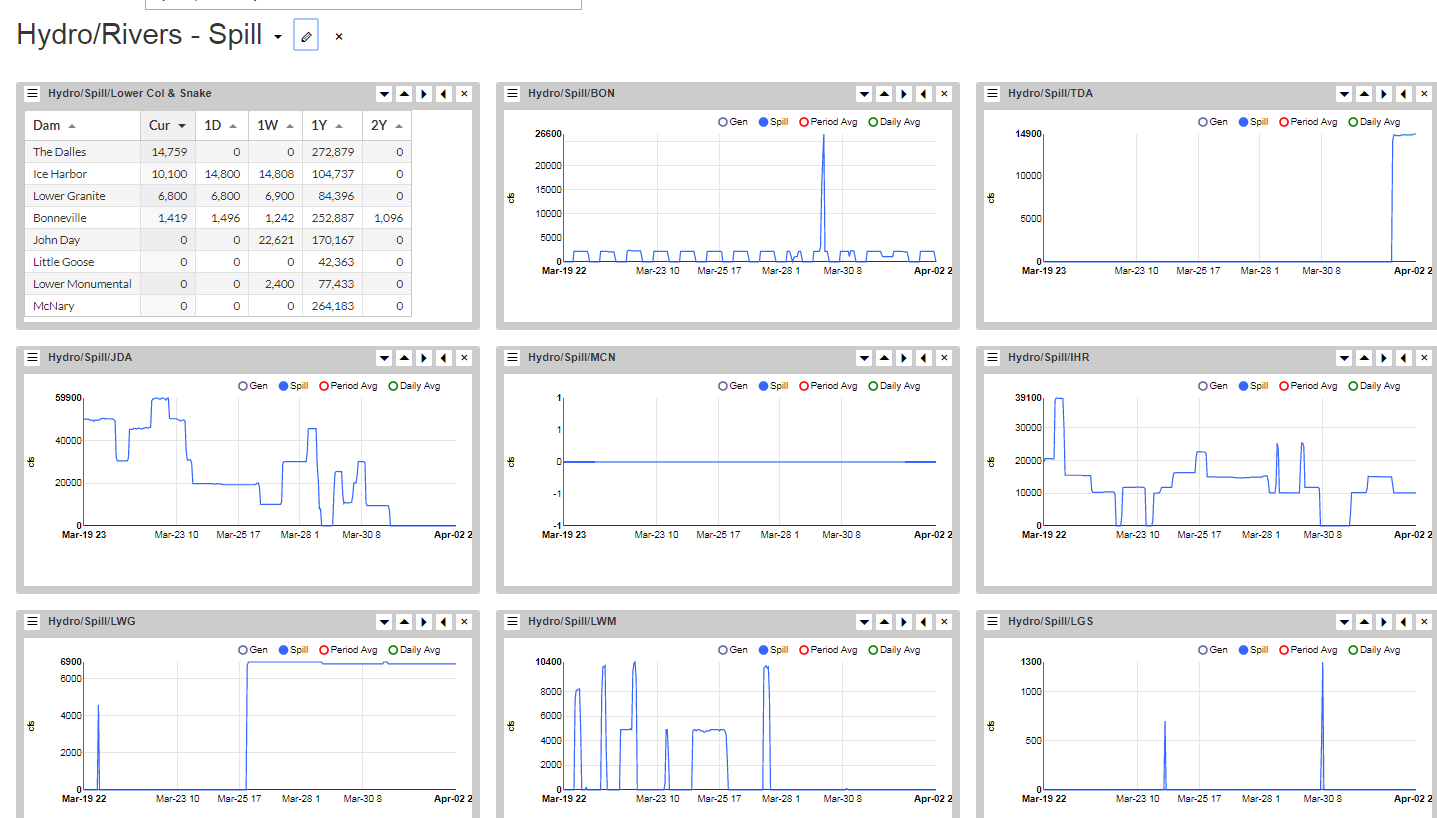 We see TDA already starting, and by week’s end, all of the Lower Columbia and Snake will be dumping water that had been passing through the turbines. Call that bullish for MidC BOM. 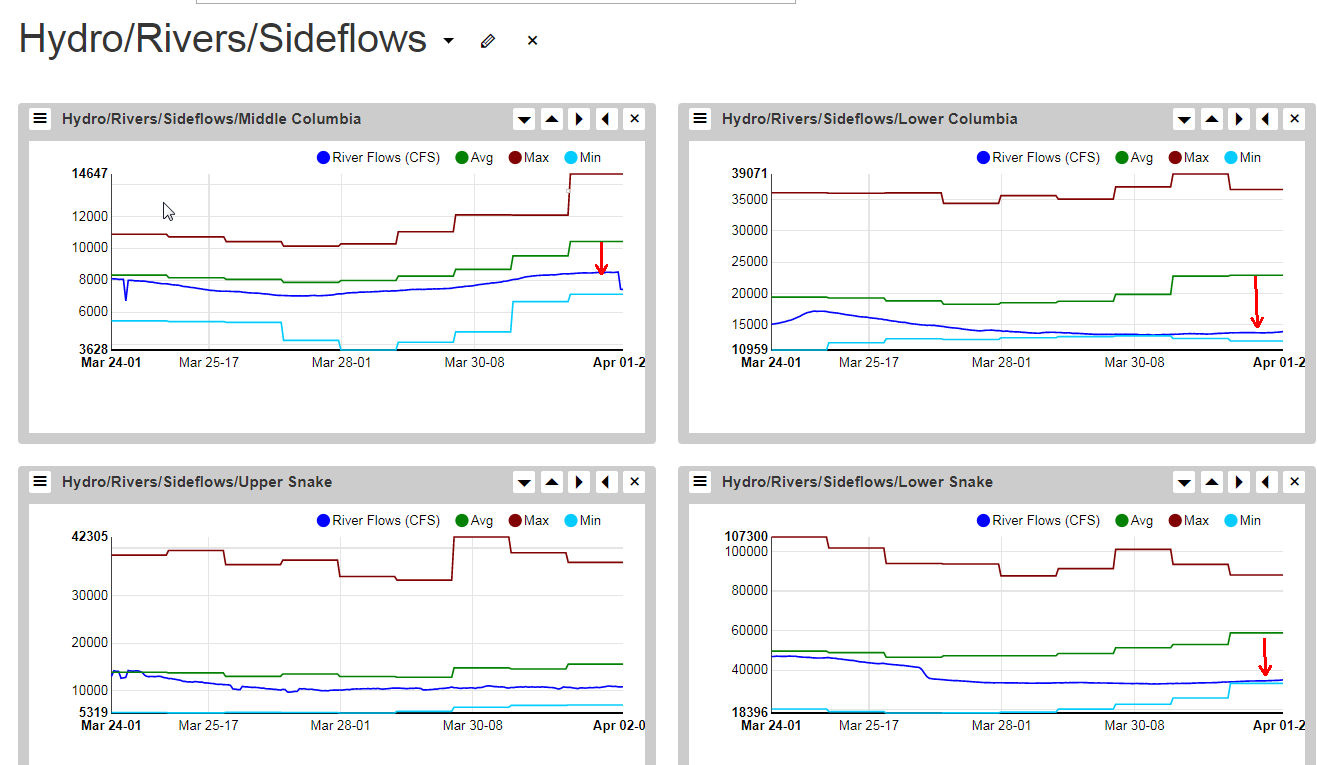 Meanwhile, nothing is melting; the Ansergy Sideflow Indexes are all well below their ten-year averages. No freshet coupled with spill should keep BOM tight. To bad the rest of the WECC is so weak. 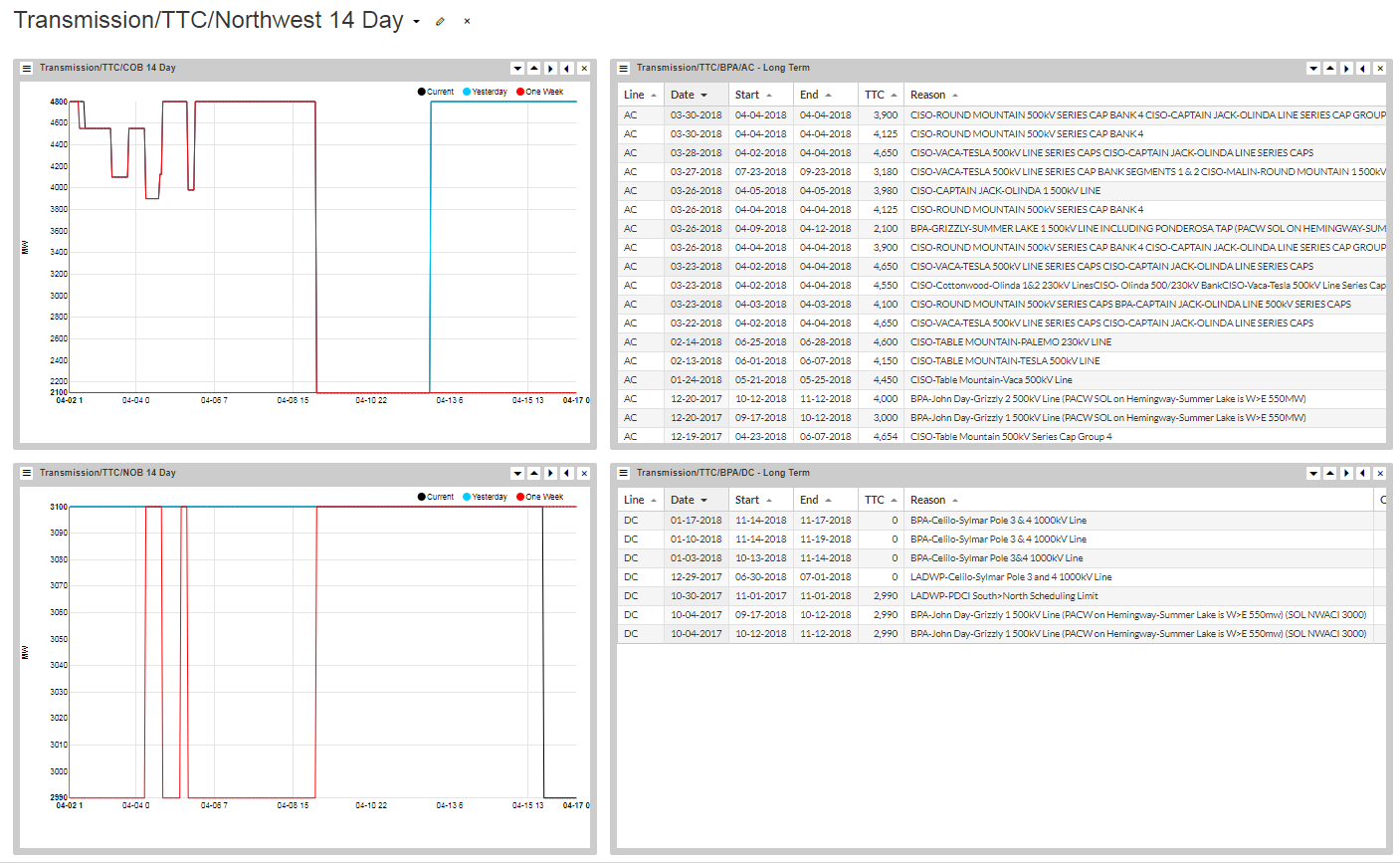 Nothing much to report on BPA’s TTC. 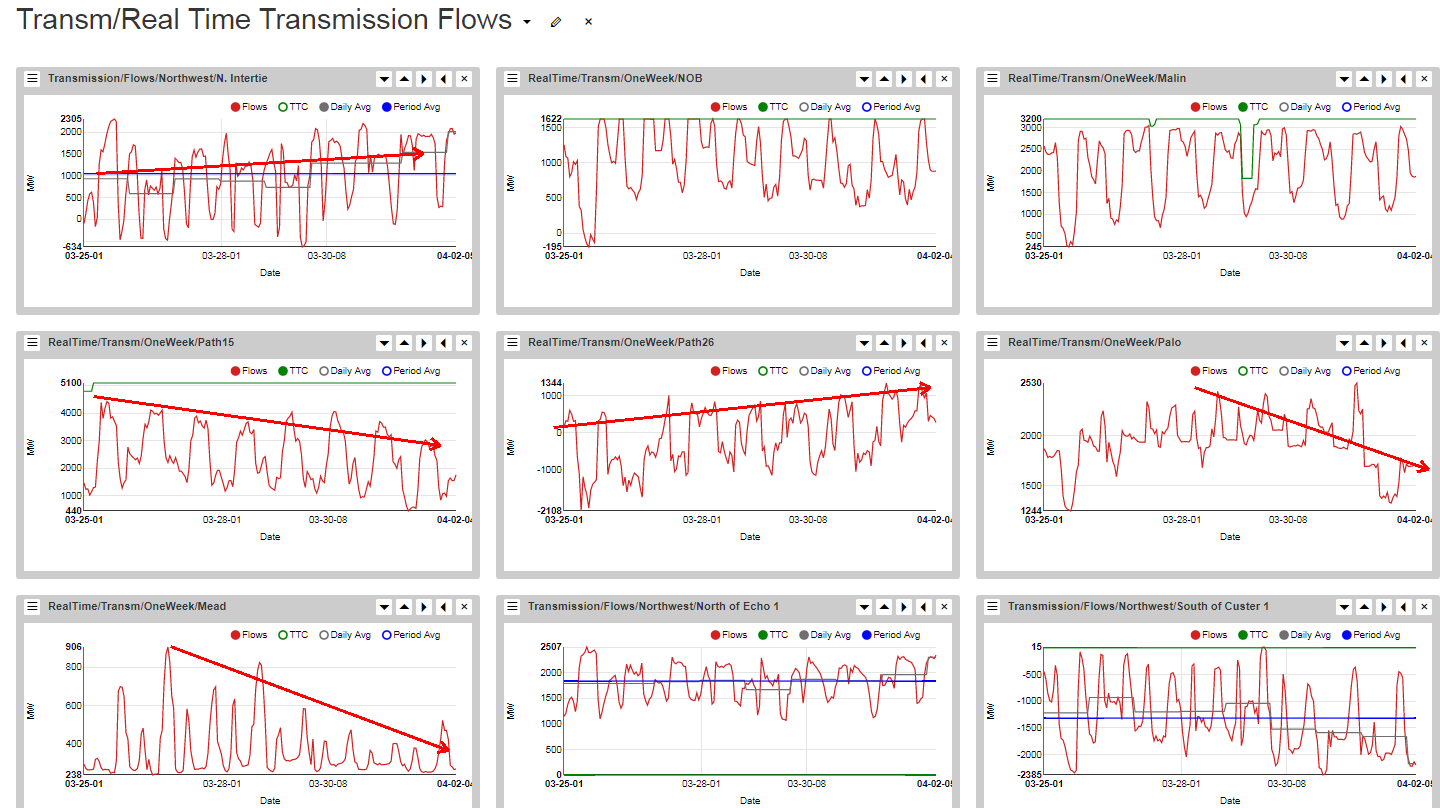 Lots of energy flowing north on the Northern Intertie, almost 1500 aMW ended up in BC’s reservoirs over the weekend. Path 26 is more north-bound than south, Palo’s flows into the ISO are off, so are Meads.

Palo will grow more bullish off of warmer weather. The ISO will grow more bearish off with mild weather and new rain. The Northwest will grow tighter off of Spill but may be looking at a deeper draft, not that more draft will make that much of a difference if the snow doesn’t start melting. These new storms also are rendering June-August more bearish, but June already was a train wreck, we think the carnage spills into Q3.