Our takeaway from the earlier post was bearish ISO, bullish Palo, and neutral to bullish Northwest. Let’s see what the market thinks. 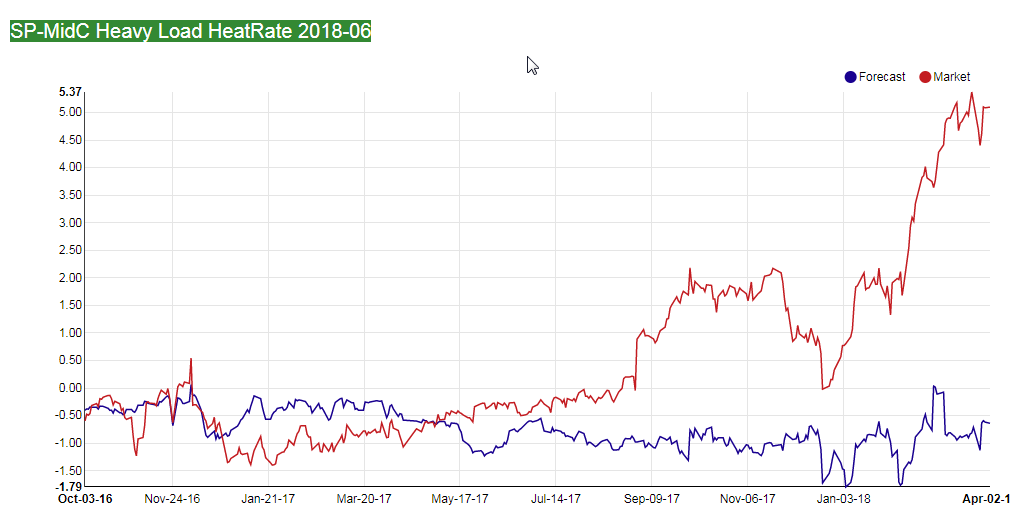 The June SP-MidC HL has blown out but is probably more reasonably priced than not. Each cold day in April pushes more water into June, but if the turbines are at hydraulic capacity does it get more bearish? No, it doesn’t, plus BPA has a remarkable ability to keep the gas on the margin, will be interesting to see if they can pull that off this year. They did last year. If they can, and do, this might be a short candidate since the ISO is getting an ever-bigger water year. 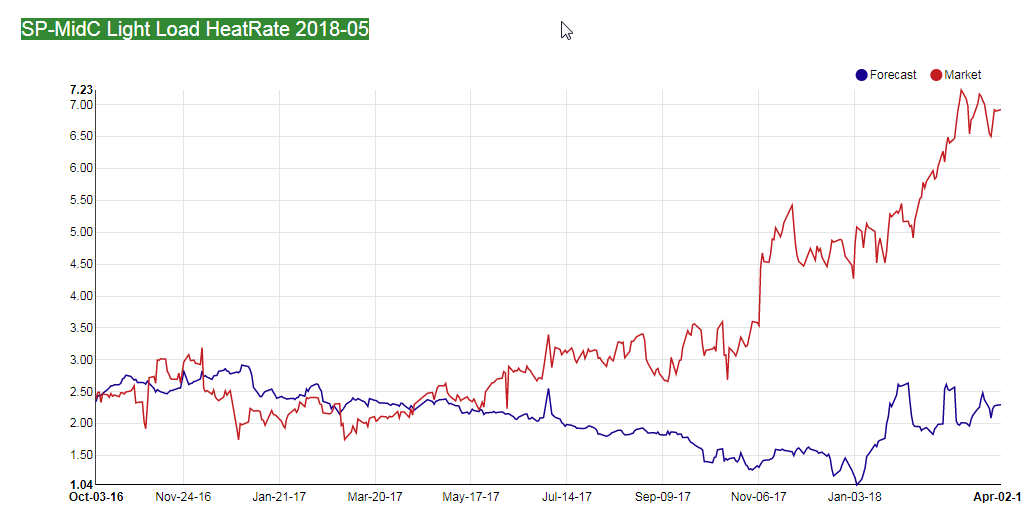 This is closer in, the May SP-MidC LL spread and is also at contract highs. We’d be more comfortable shorting this, especially with the Northwest cold and just 27 days to delivery. The short spread prayer would be a cold April that spills into May coupled with building snowpack inside the ISO.  Should all of those “ifs” come to fruition, this could be the proverbial home run. Since we don’t know weather from April 15 to April 30, we can only sell on cold forecasts and buy on warm; we only see cold, so we’d sell this spread today. 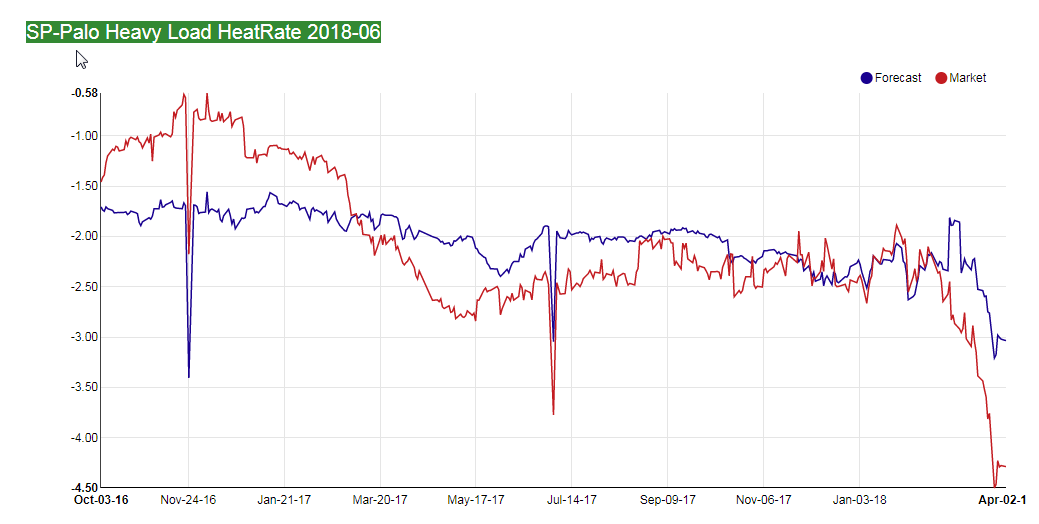 This is cheap but might get cheaper if the ISO doesn’t warm up soon. And once it does warm up, it will be faced with another 2000 aMW of hydro, so maybe this is more fairly priced than not. Still, it’s at a contract low, and it isn’t that wet inside CA. All you need is Burbank to post 100 between now and June, and you’ll get paid. We’d buy it just because it is so cheap. 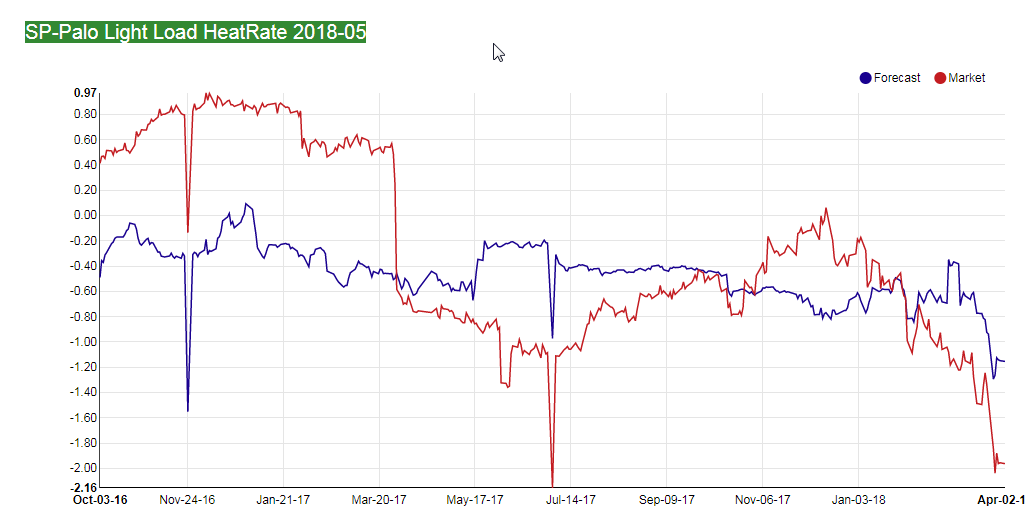 Even closer in, May and just as cheap. Pick your poison; we’d probably take this one because it is so close in. A negative heat rate implies very little flowing on the lines or none, yet we’re sure Palo will keep sending. 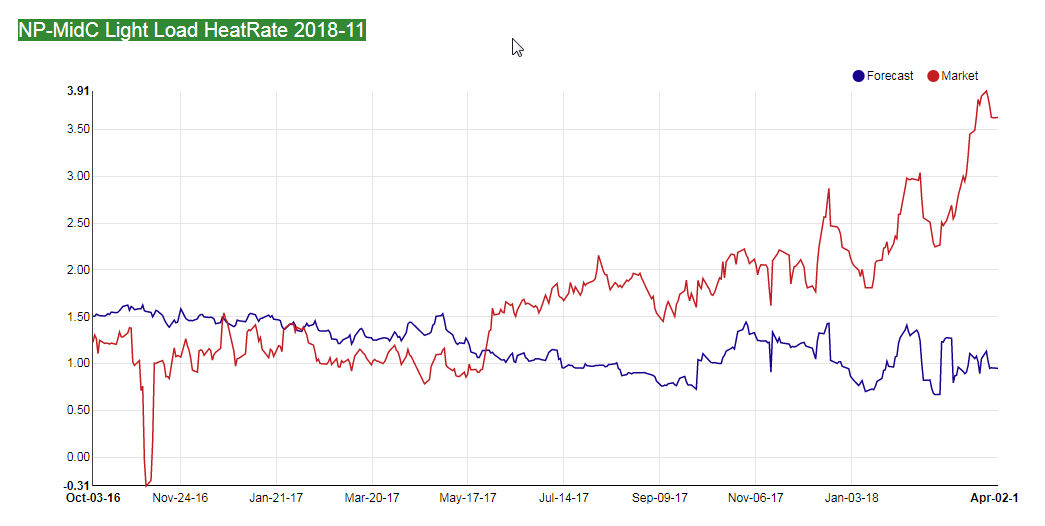 The Nov NP-MidC LL is trading like November is impacted by WY18, but that month is in WY19. This is too far out to be affected by this water year, but if cash gets ugly in the MidC, all the term spreads will go bid. To get paid, you may have to wear some pain. We’d pass because of that. 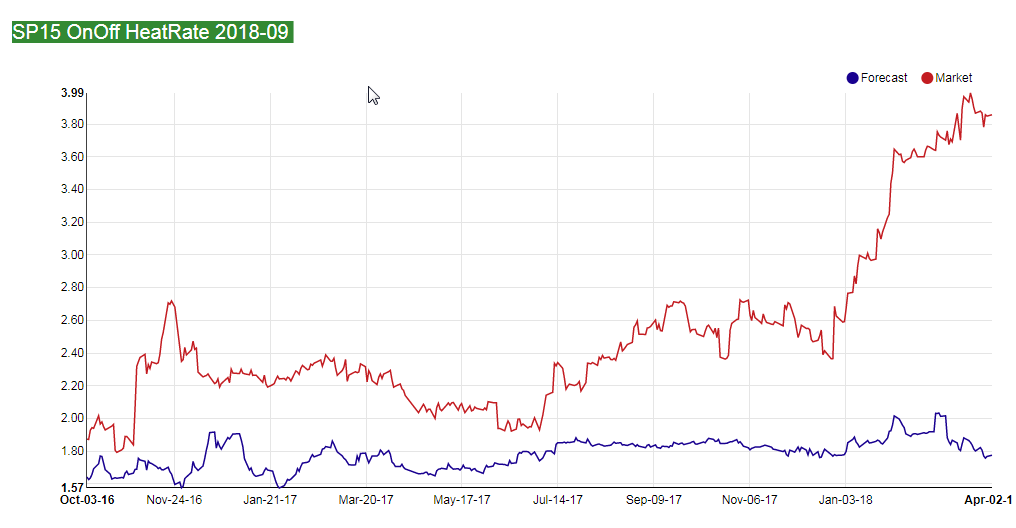 This is odd; the Sep SP On|Off; now it’s at a contract high and we’re wondering what you know today you didn’t know two months ago? 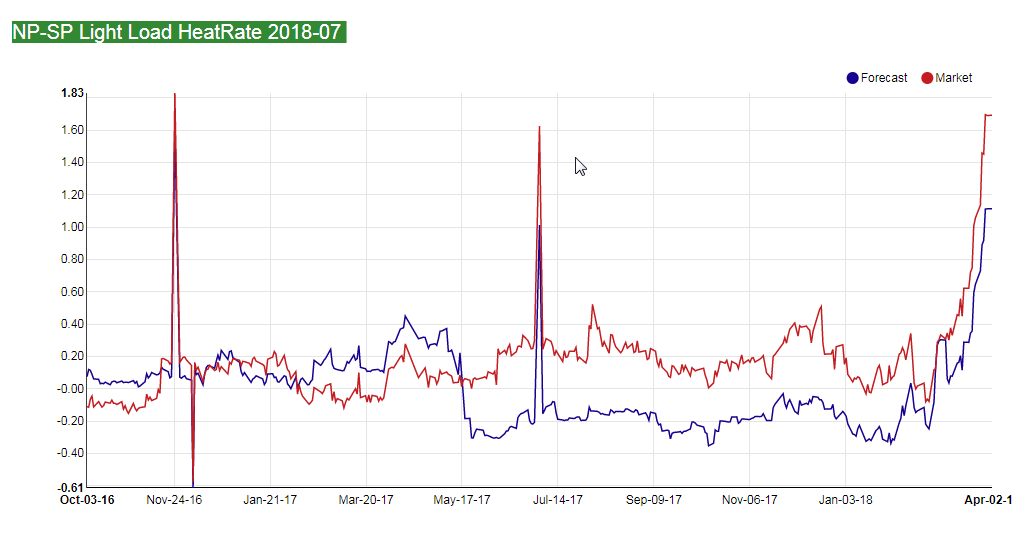 Of a sudden NP looks like gold, but isn’t the Sierra snows building? We don’t get this and would short it. 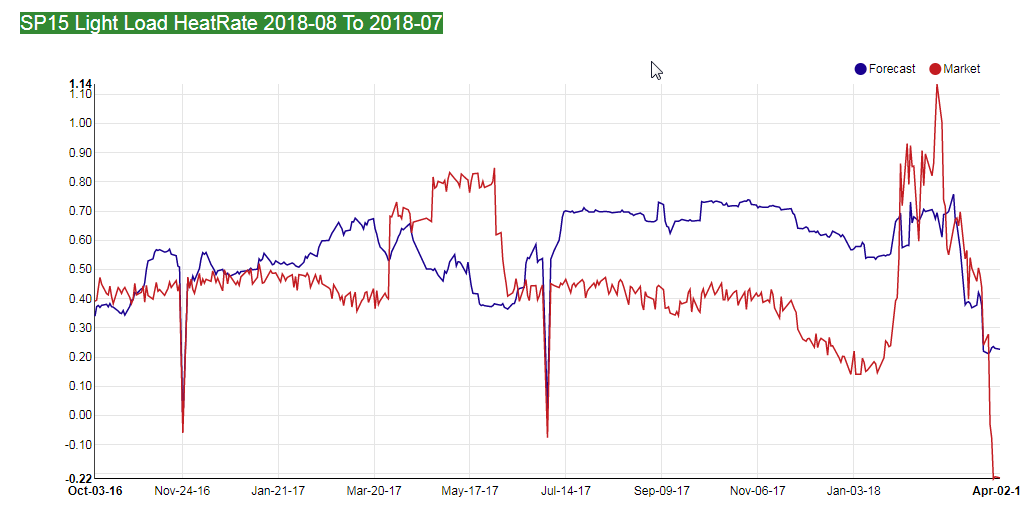 Same trade, but at SP, and same sentiment. If anything, this roll should be growing as the water year builds. 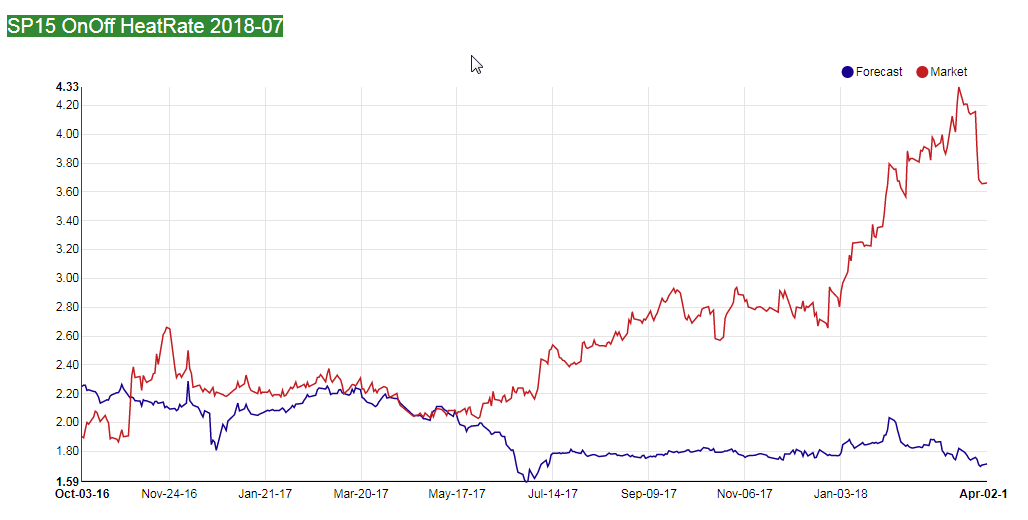 We wrote about this, now its correcting, but if we had shorted it we’d probably buy it back; hate being short the daily call. 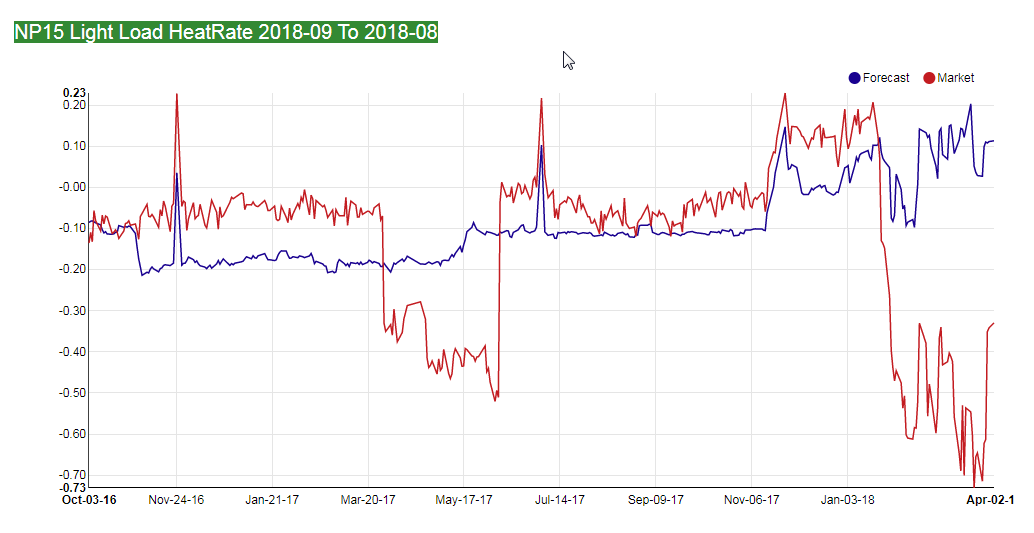 Same here, take your gain and move on. 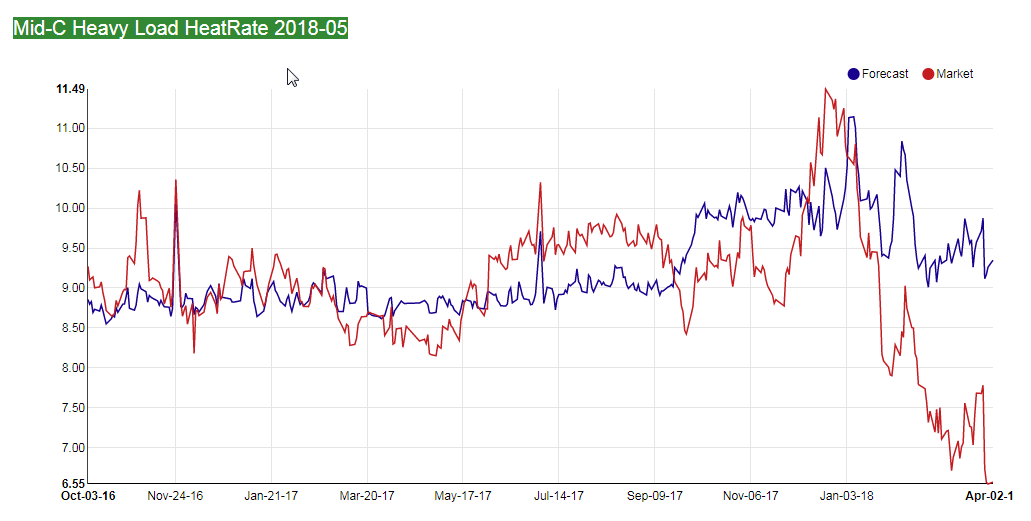 We won’t give up our bullish sentiment for May, despite what you think. Every cold day in April makes May a better buy; we are only 27 days from delivery. If the patterns hold, this is the buy of the year. Remember, there is a sharp reversal in pond direction in May – from drafting in April to refilling in May. Without melt, there is nothing to refill with.

Our last look at the roll to BOM, it’s cheap, and we’d be comfortable shifting all the length into May. 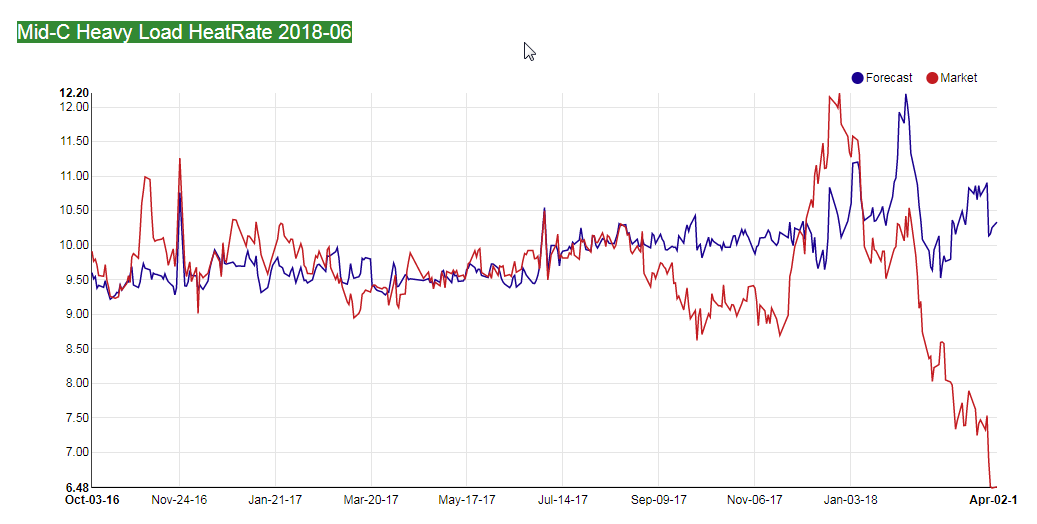 June’s been trashed, as well it should be, but we’d be cautious about assuming BPA won’t keep some gas on the margin which would render June at 7k heat rate. Plus, we’d play this from the cash side; if it stays cold we will buy it, but be ready to puke on warm Kalispell. 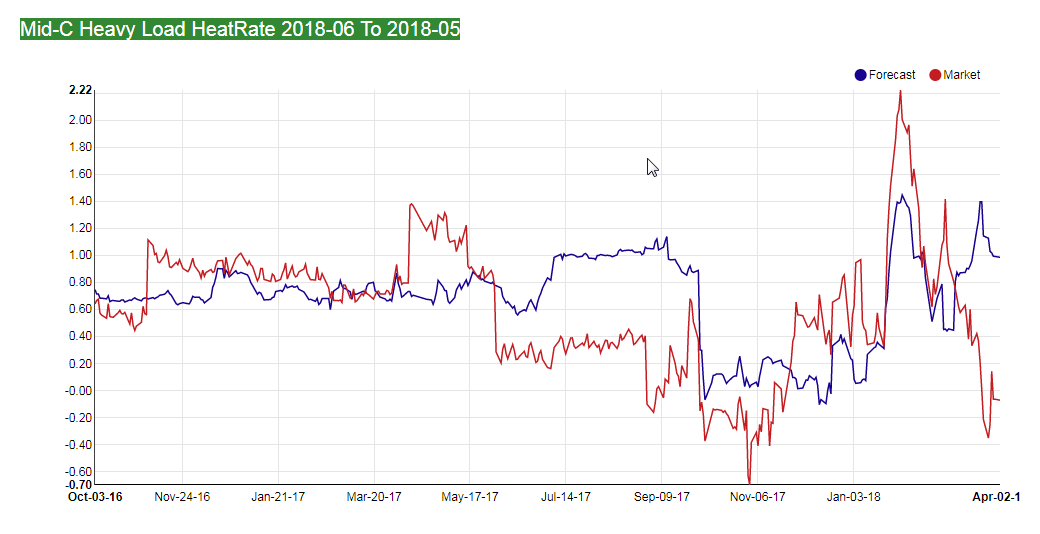 Between owning May or June, we’d own May, but most of the roll value is gone. Still, we think there is more to come, as long as it stays cold, and would short this, too. 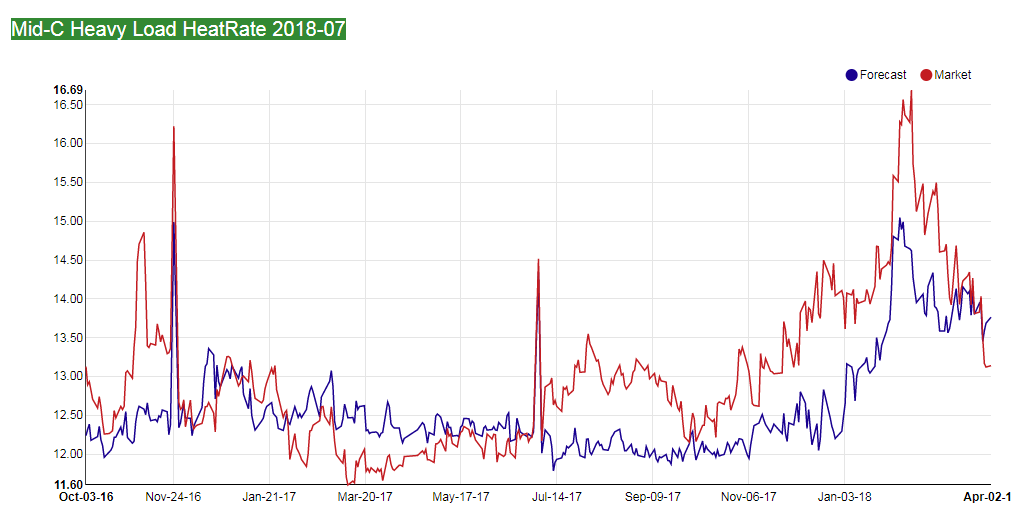 July realizes its wakeup call, now the trend is your friend, and the misery is not over, July is going to get beaten down more as snow builds and melt defers. Compare today’s price with Oct 1, the start of the water year when you didn’t no clue one about WY18. Now you know all the clues – its a massive water year.  If anything, this should be trading 1-2k below that Oct 1 #. 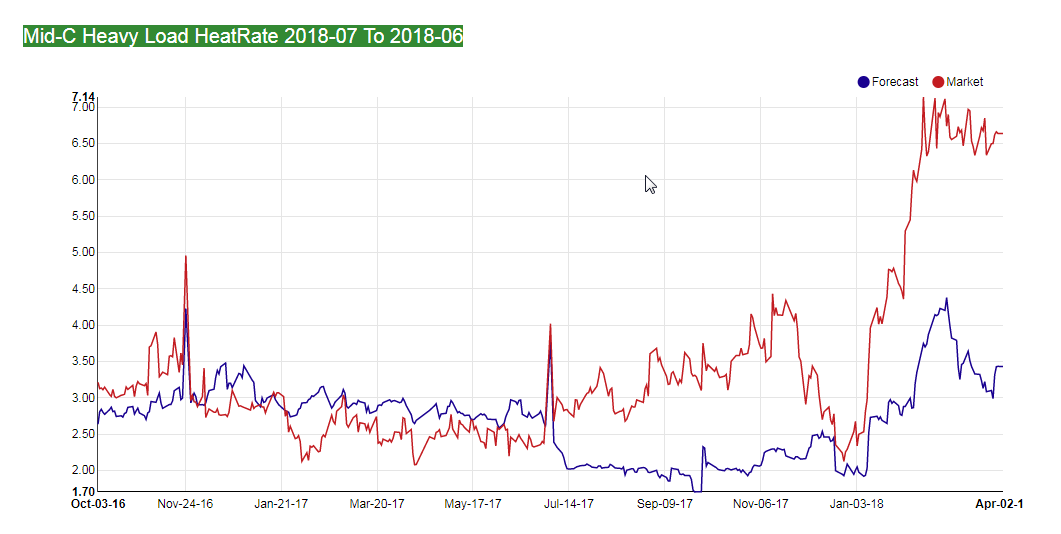 Its super-high, the July-June roll, but we’d be short July. 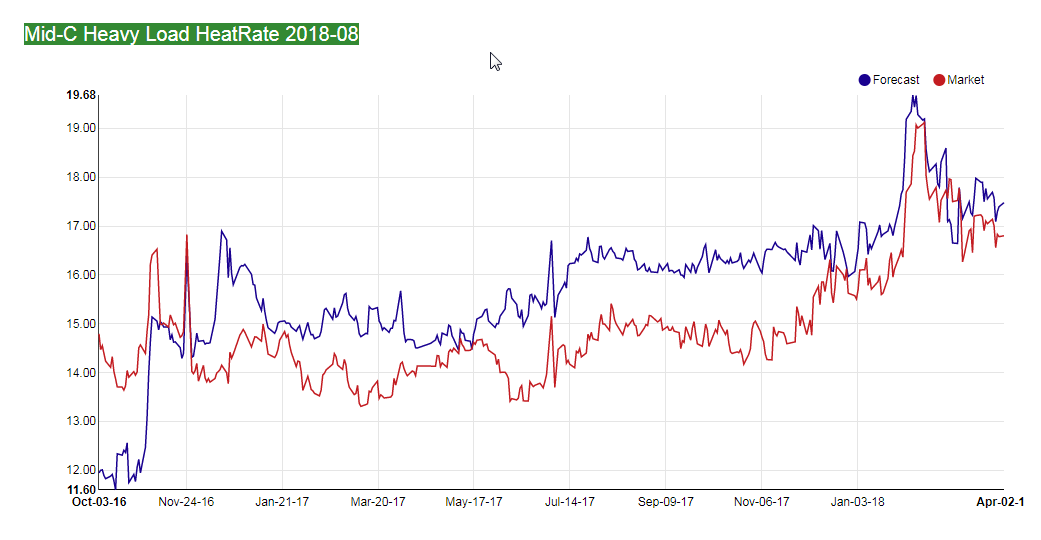 August has come off some, not enough. If cash is ugly in June all things, MidC will get pounded. Plus, building snow and deferred melt are bearish for Aug – we’d short it. 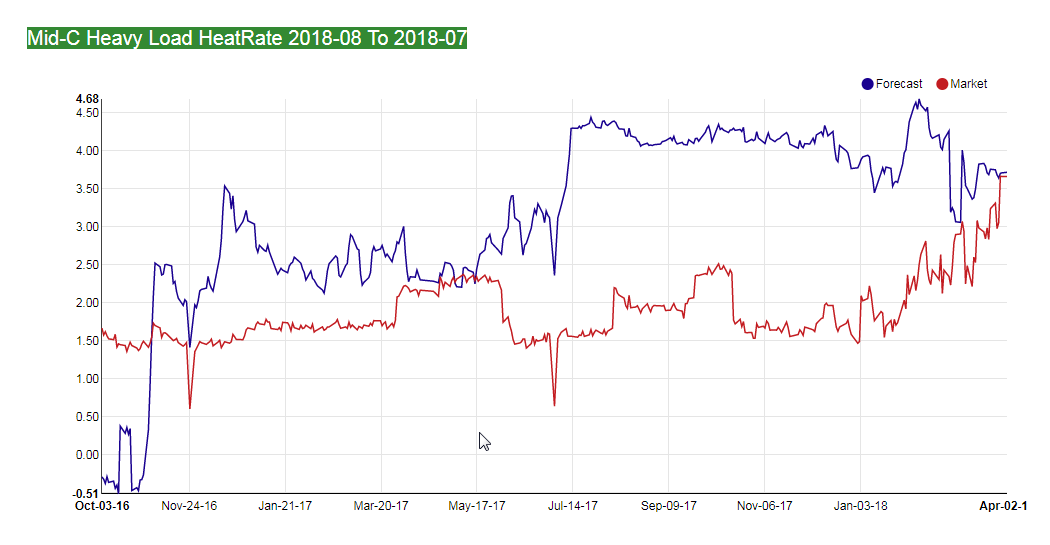 The roll grows, but we’d be short both.

Sep, the poor man’s summer, continues to rally, not sure why. If cash is weak, all summer MidC gets pounded. Short. 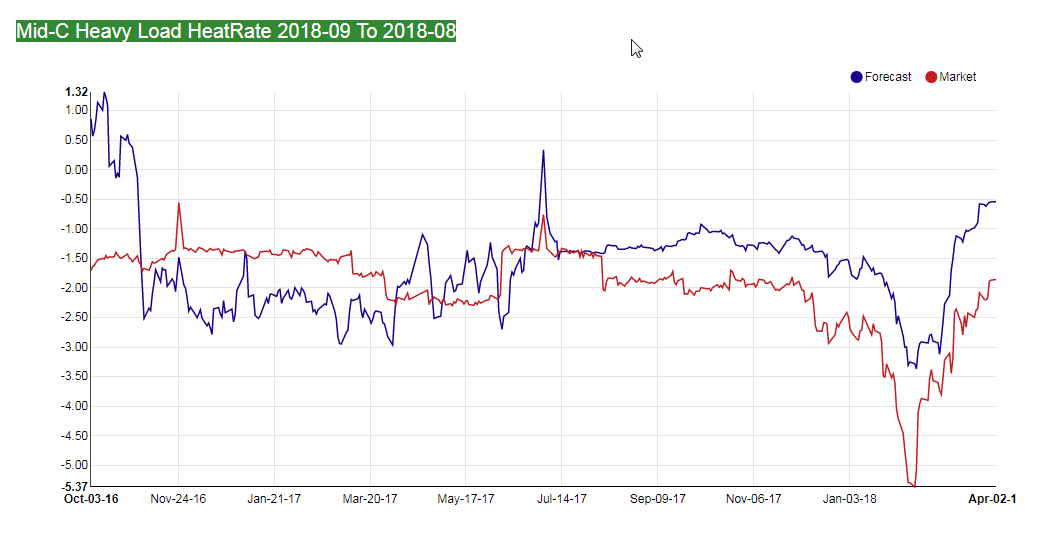 This was a buy, a month ago, now its not. We’d be short the entire Q3.