Our takeaway from the fundy crawl was more bullishness outside of the ISO next week, neutral to bearish inside. The Northwest gets wetter but stays cool which jams more melt into June-July, perhaps August. The biggest news, we think, was the AC derate running from July 23 to Sep 22.

That’s 1400 aMW stuck in the MidC that must be replaced with gas inside the ISO. 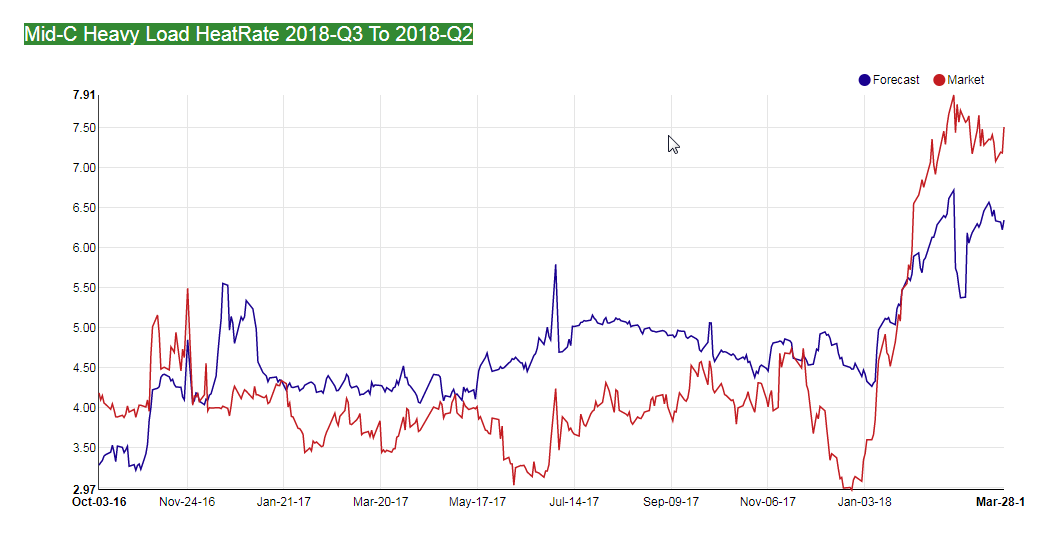 This, the Mid-C Q3|Q2 HL roll, probably expired today, but still worth a comment. It expired near a contract high, and we think that is a mistake as long as the front stays cold, which is what we see for the next ten days. Cold defers melt, pushing this big water year into July, perhaps August. Every cold March and April day is bearish for July – forget about June, it is already maxed out for the month. 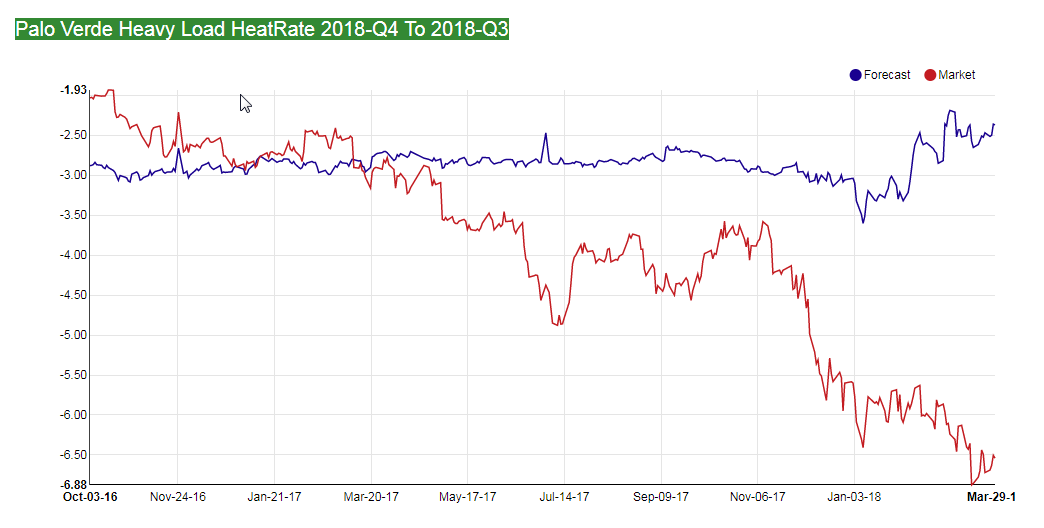 This is cheap, the Q4|3 HL roll at Palo. All it does is speaks to the year-long Q3 rally, but at some point, anything is a buy, and we’d suggest we’re there. Of course, you’re stepping in front of a runaway freight train, but hey, you only live once. 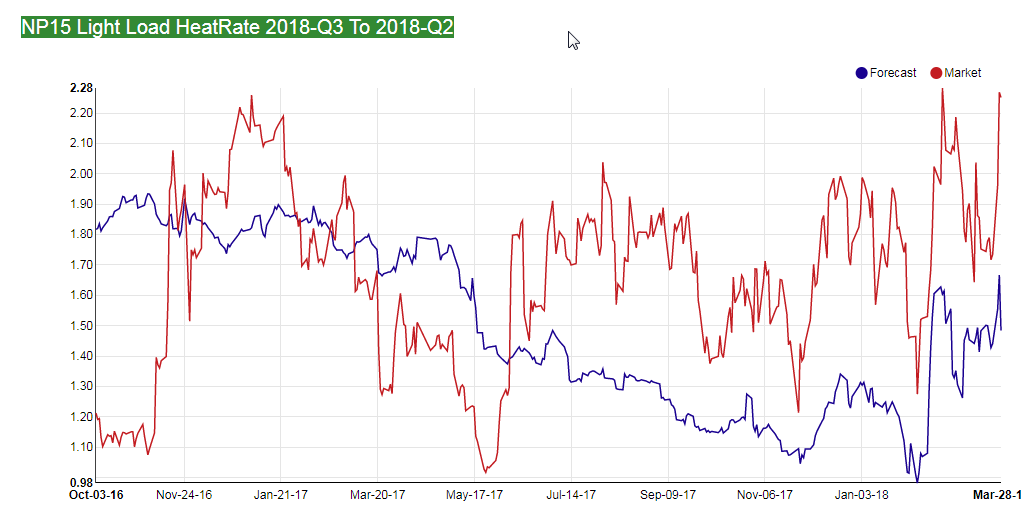 Like the MidC, this one expired this morning, but check out the excellent volatility, jumping 500 btu in a few days. With Kal swinging dry, the two gets bullish and has no impact on the three, so the roll should come in, not blow out. 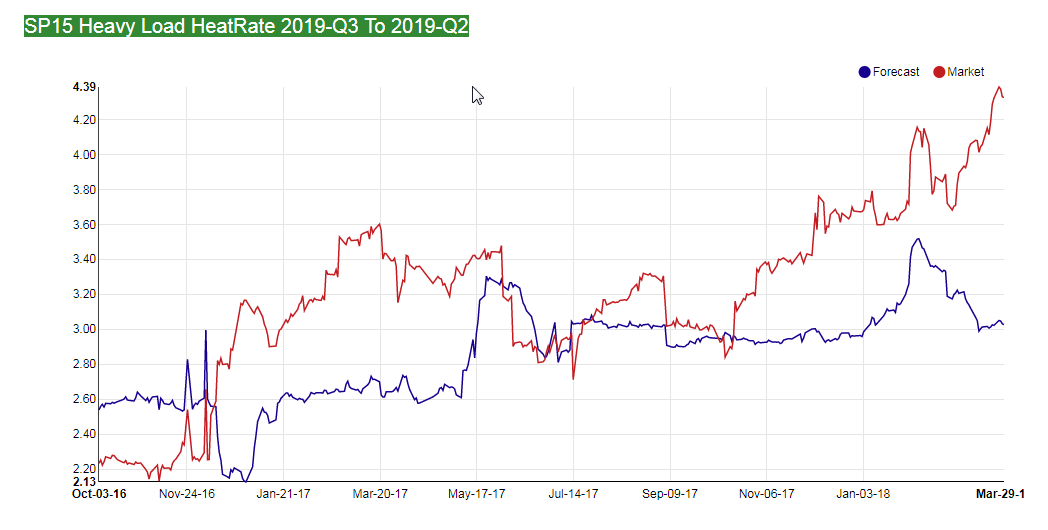 Same trade, and chart looks like the Palo. For a year this has done nothing but go up yet fundamentally, nothing changed. Now the Socal Citygate scare is off the table, at least till next fall. 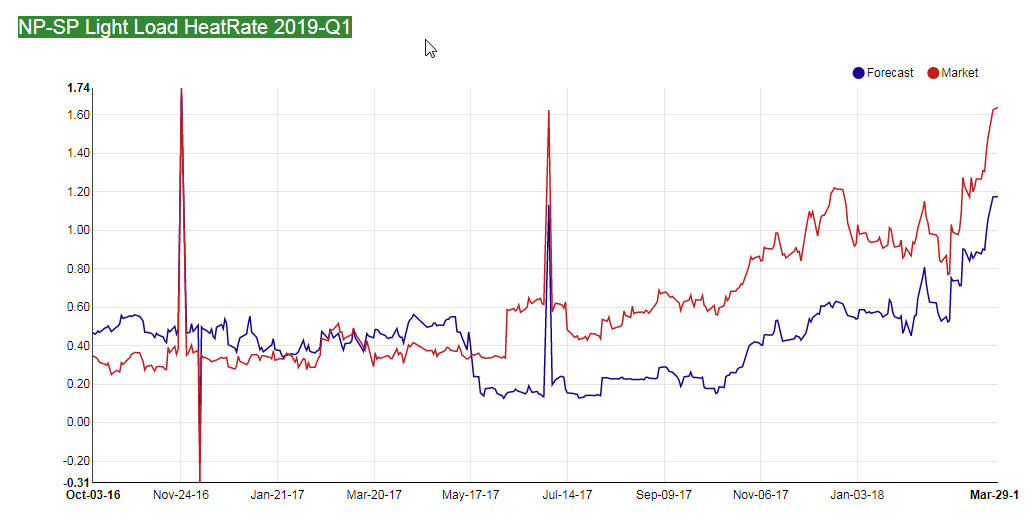 This spread, the Q1 NP-SP LL, has set a contract high for no apparent reason. No one knows anything about next winter, not temps or precip, so why the move? Perhaps a reaction to cash, but we’d expect these spreads to come in, not blow out, as the freshet picks up steam. 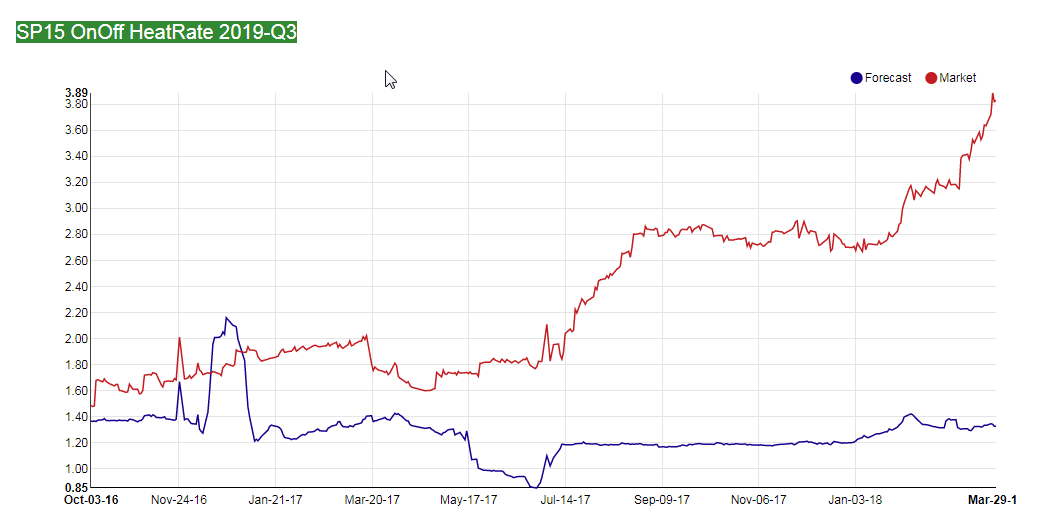 There is a consistent theme in all these plots relating to SP or PV – upward sloping. Anyone who shorts gets slimed, but can something defy gravity and go up forever? This is 2019, and you have lots of time for a correction, one that may be coming as soon as Lake Tahoe hits the 70s. 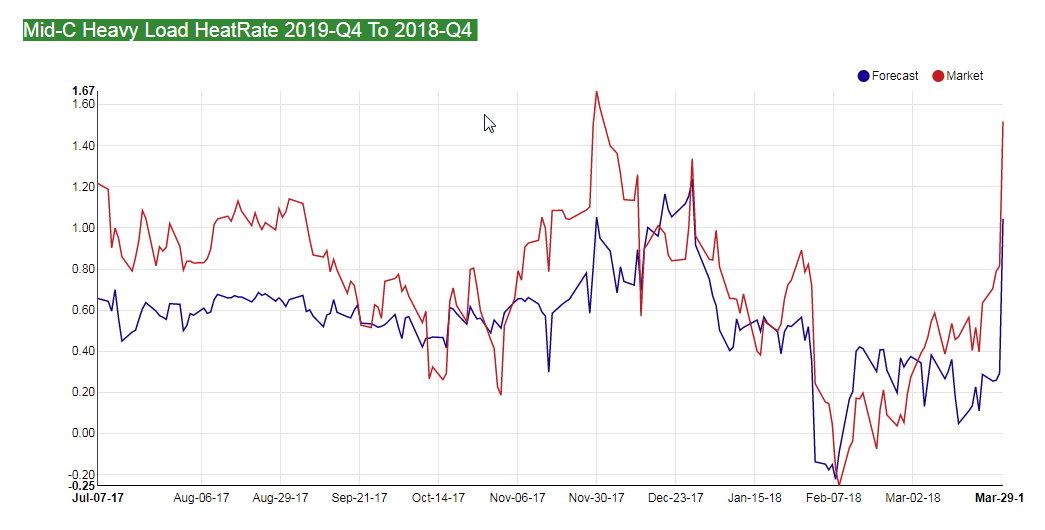 This is a “year on year” roll at MidC, the Q4 HL. This has soared, perhaps a bad mark, but if its real we’d want to consider fading. That said, fundamentally, 2019 is worth more since we must assume ordinary water whereas we know 2018 has a significant positive anomaly. 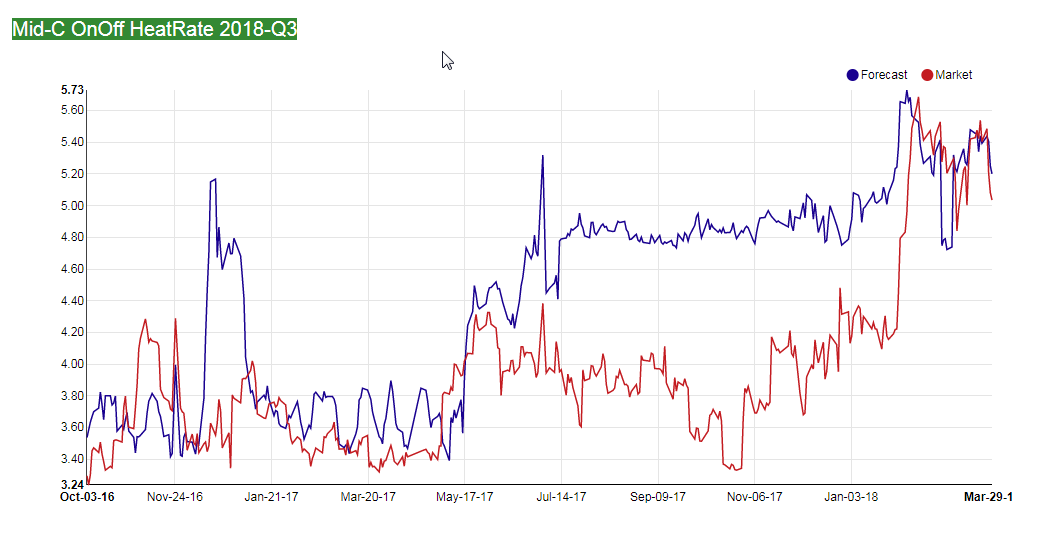 We think this is over-priced, too. If May is warm, or really warm in June, much of the runoff will be in the Pacific by the time Q3 rolls around. We know BPA will be able to keep gas on the margin in July HL, but there is a decent chance for them to keep the LL there, too. The first couple weeks of July might be painful, but this could look like gold in Aug-Sep. Now factor in the AC derate, that cut will be felt mostly in HL since the LL is rarely full. 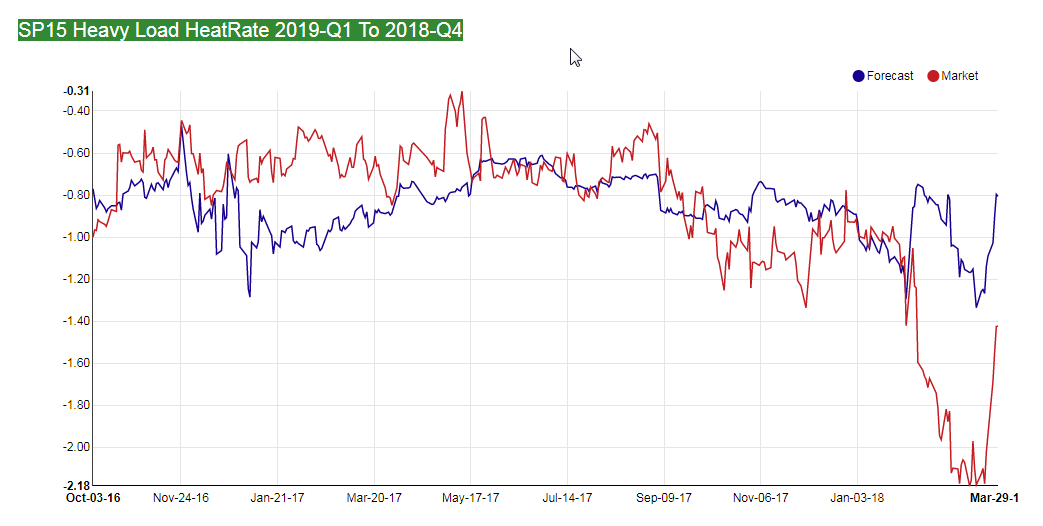 We wrote about this when it was next to free; now it’s not. 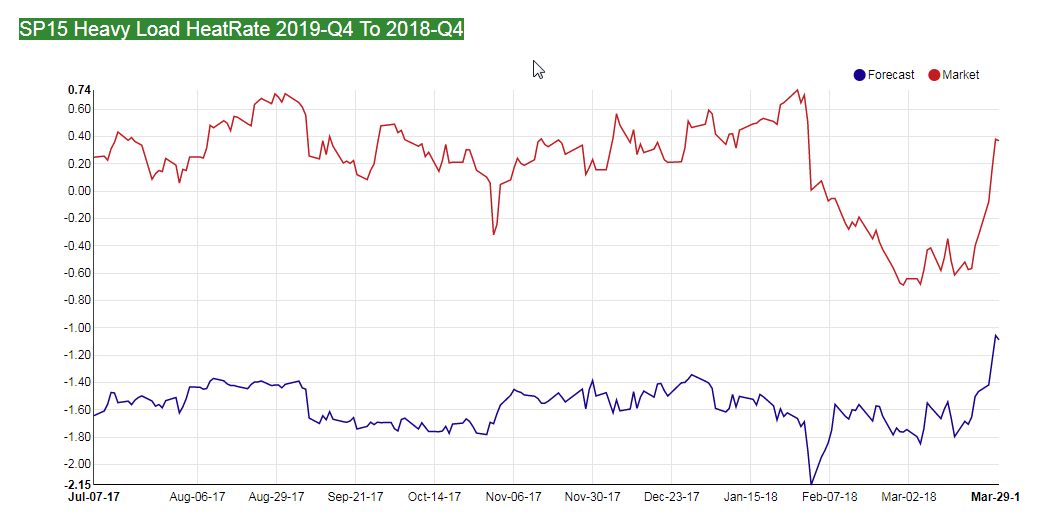 The HL version and same correction; now it is value, and we’d have nothing playing here. 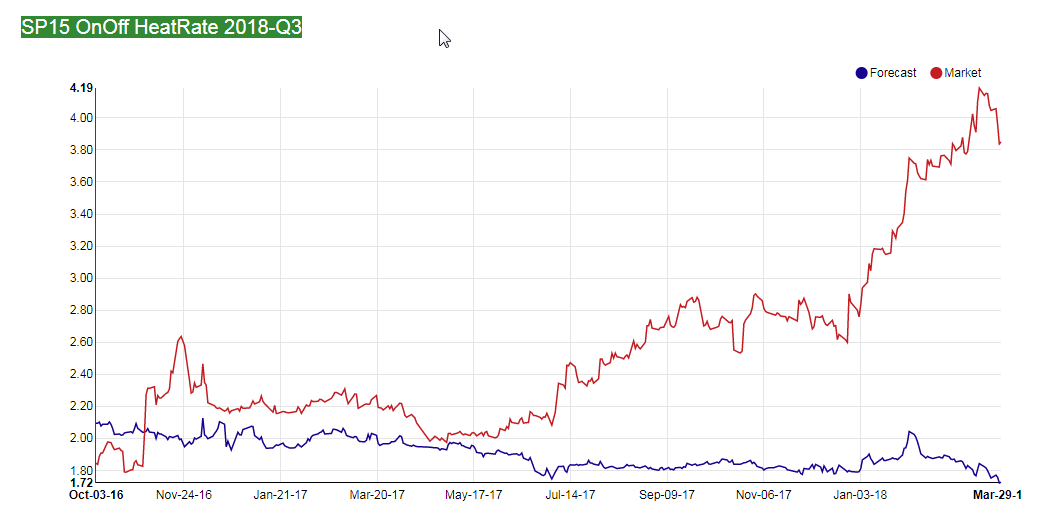 The Emperor has no clothes? One of the most significant corrections in the Q3 on|off in the last twelve months. Still a short, in our book.

MidC stays cool but grows wetter. April brings the spill season and the final drafts; as long as it stays cool things should stay relatively tight. We should also see some coal outages commence soon and peak in May. Cold weather would make things interesting, coupled with the fish spill. 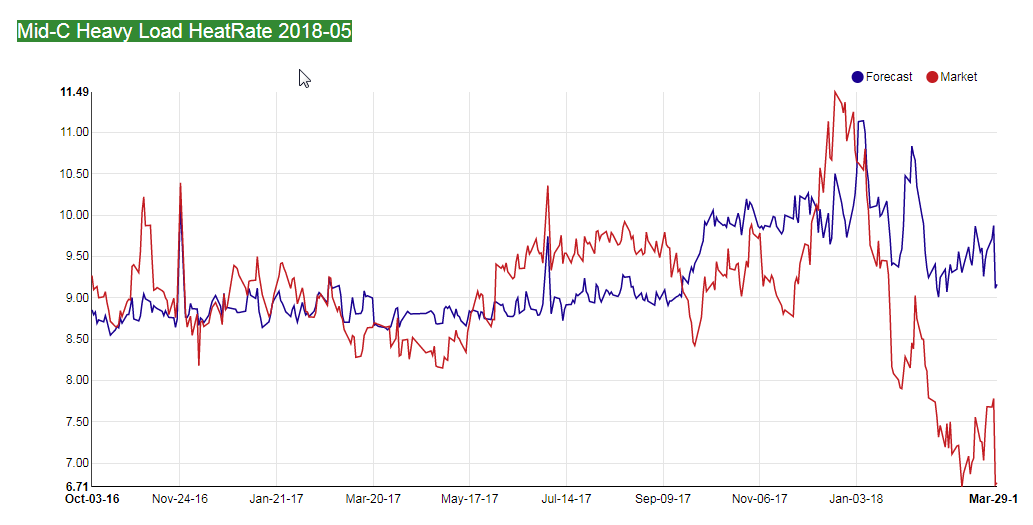 We’ve loved on the May while you hate it. We still love it as long as the weather stays cool and would double down at these prices. 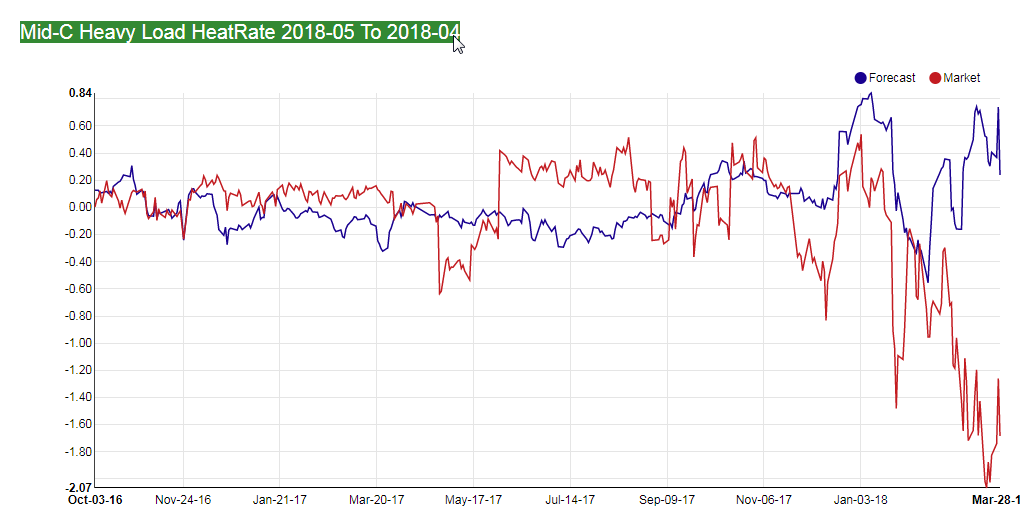 Last look at April. Admin Note: We will be releasing a new version of APT in April or May that will incorporate BOM, for now, we drop it once it goes delivery.

The roll has rallied some; now it comes off a bit. We’d not play this from the roll-side. Instead, we’re long both. 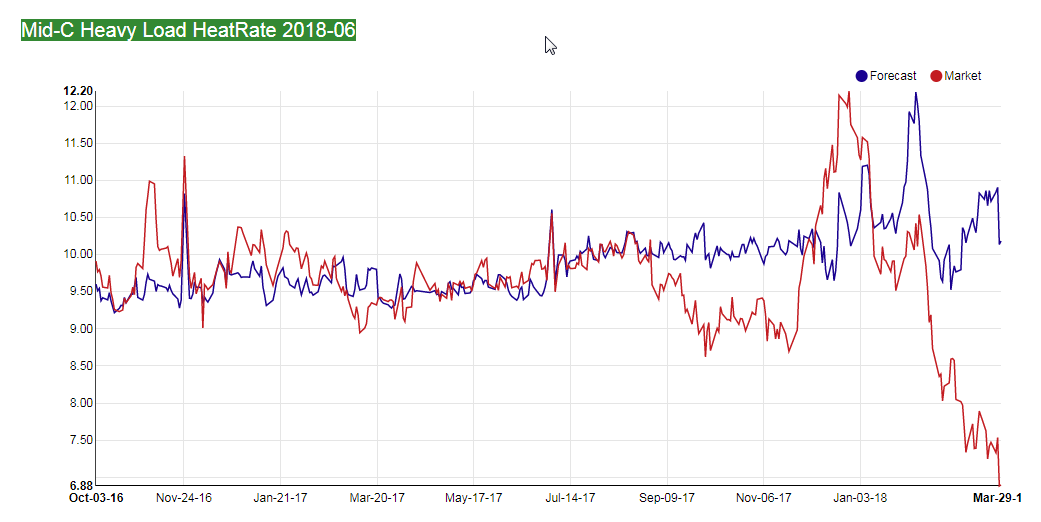 BAM, June gets pounded again. Not really disagree, except from a timing perspective. As long as cash stays tight, and now June is trading beneath gas, we’d be long June. Of course, once that first heat hits the Northwest, you’ll want to get out of all length, but we don’t see that yet. 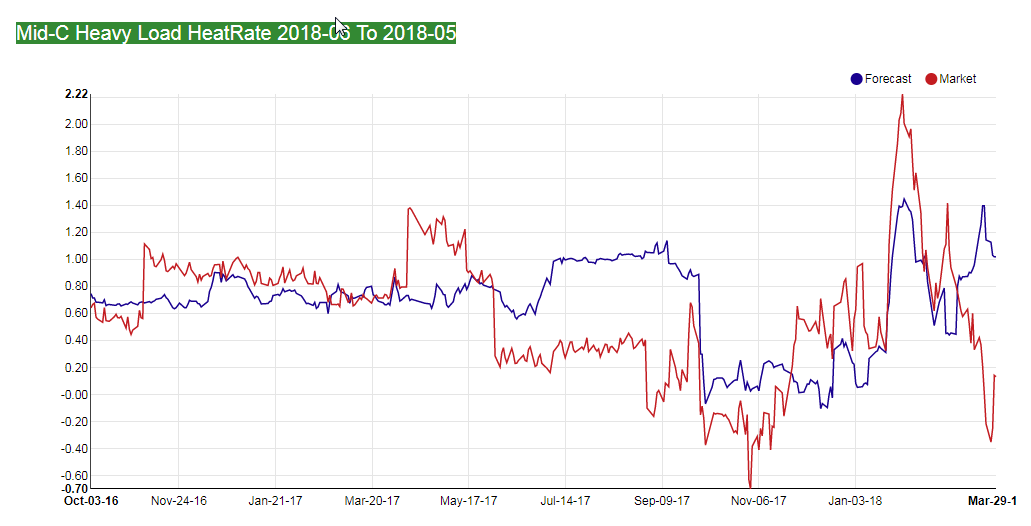 This has been a good short, until the last couple of days. We still like May over, the market is trading that way, and think there is more room and would sell here. 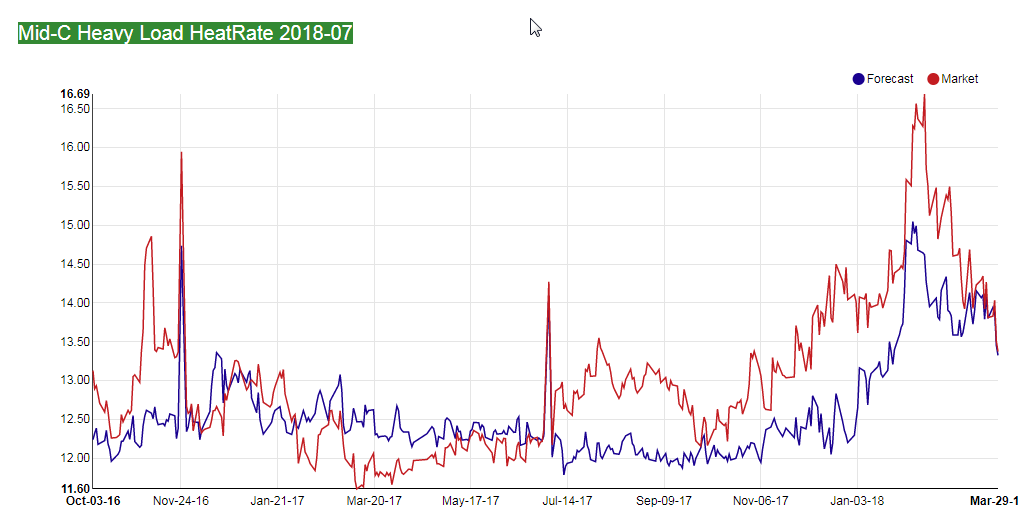 July was ridiculously priced a month or two ago; now it is reasonable but still rich – as long as it stays cold. Broken record, right? But that is the reality of trading MidC in April – it’s all about degree days now.

Still pricey and we’d short it. 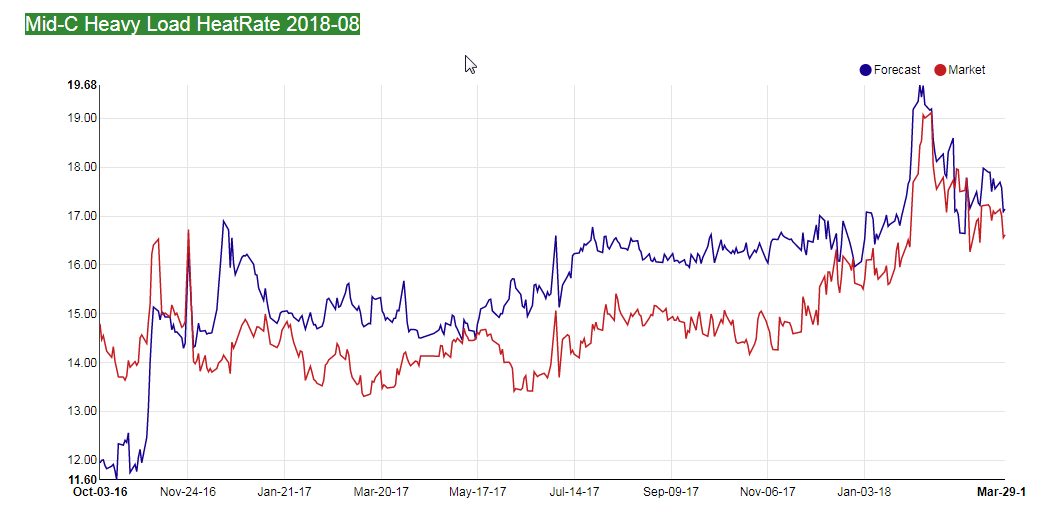 As long as the AC derate holds, August is worth less than it was and is a good short candidate, especially with cold, and wet, front-end weather.

The Aug-Jul rallied, but fundamentally it should have puked off the AC TTC change.

Sep is over-priced even with an AC derate, now it is very much so. 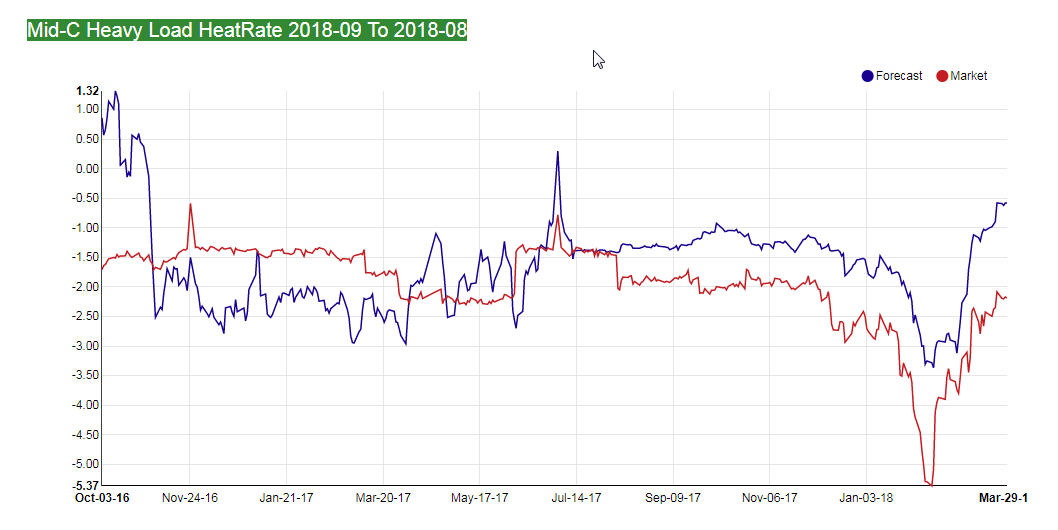 Don’t disagree with the price, both Aug and Sep took fundamental haircuts this week (TTC), and cold/wet is more bearish for Aug than Sep. Pass. 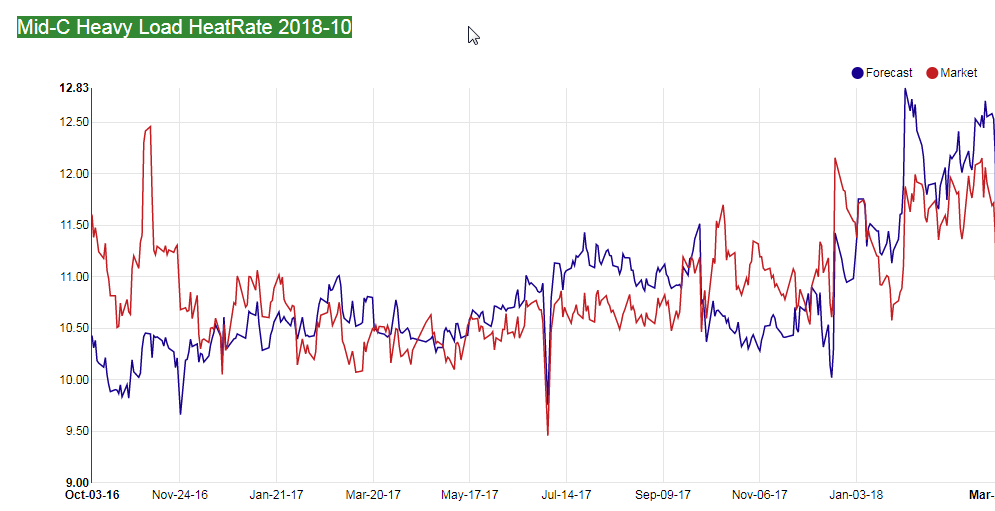 Oct, remarkably, has rallied. Its way out in the curve but is probably a touch on the rich side, especially since runoff hasn’t started yet. Wait until Coulee has 230 kcfs inflows and the pond gaps three feet a day. 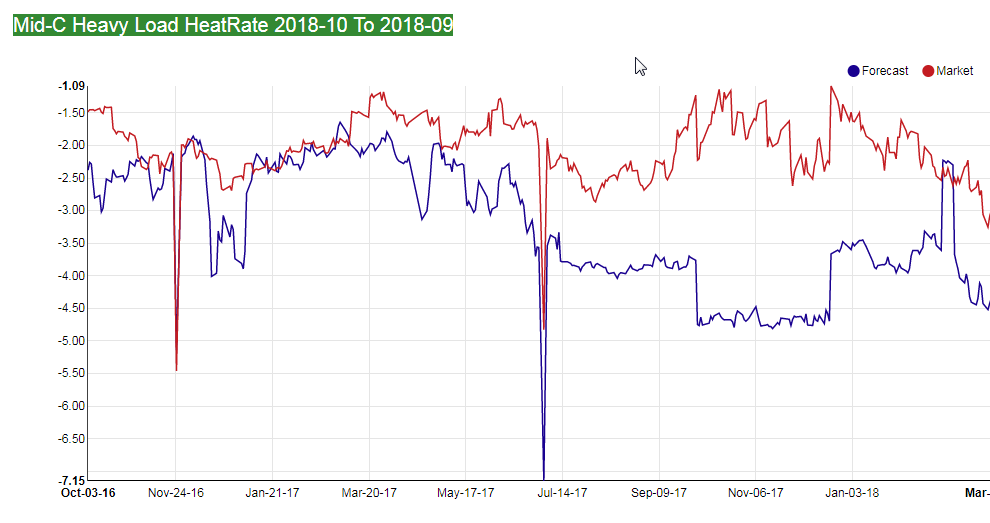