The cold and dry trend persists for the Northwest while the ISO warms some, not hot, and Palo cools then warms. The ISO is scheduled to get another blast of precip and its water year is no longer a disaster, it’s just a concern. The Northwest has enjoyed a six-week dryish spell, and that continues, but it’s been cold, and the snow anomalies are stable, in some cases growing, since a typical year would realize some melt by now.

The LMP DA is mostly sideways, except for the Palo congestion on the solar hours, which is weird because there isn’t much solar of late: 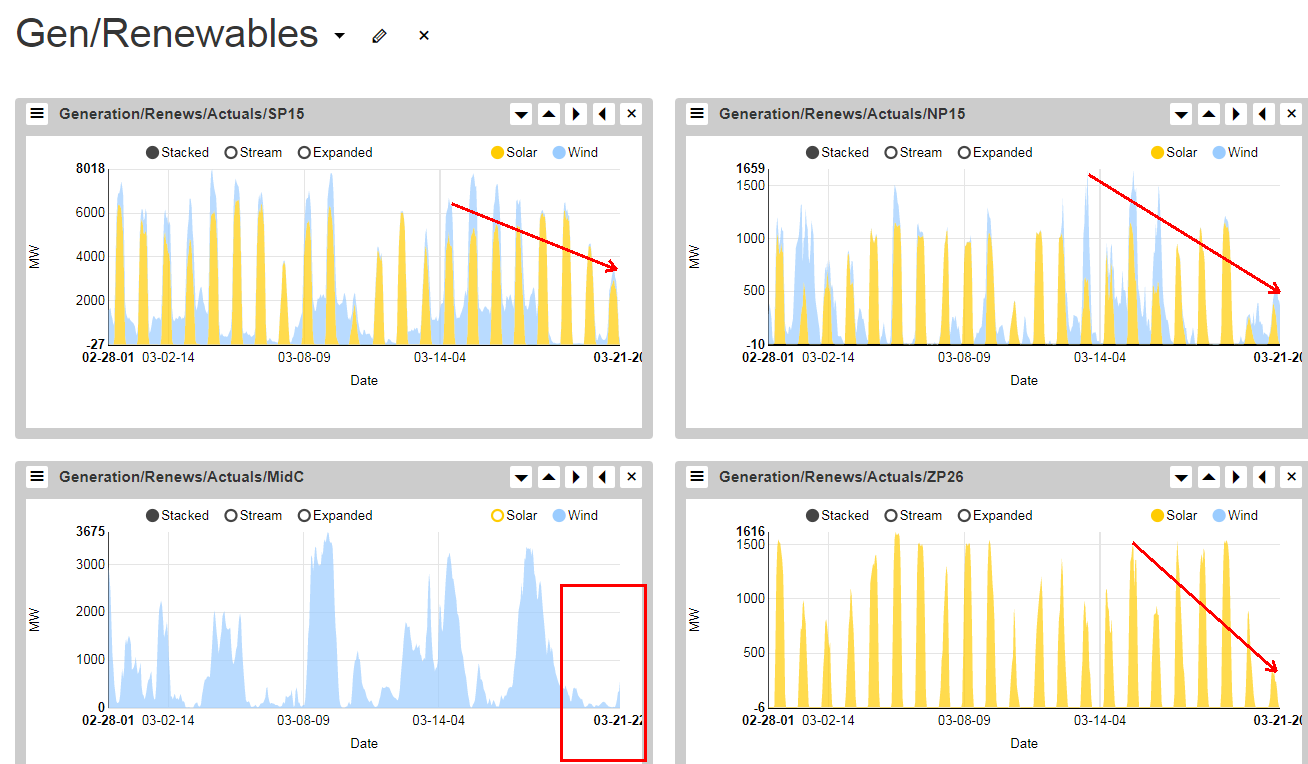 Funny how a bit of rain “rains” on the solar parade. Yesterday may have been the lowest WECC renewable day in a year. 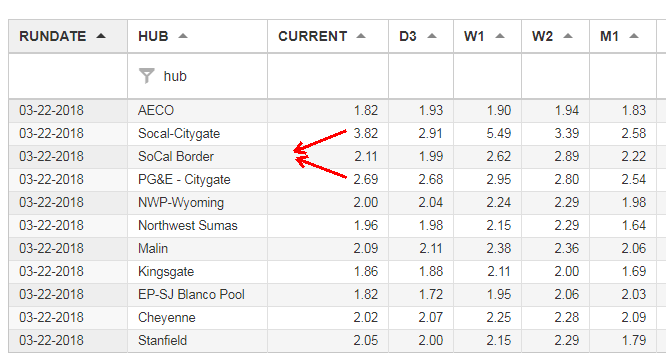 The market refuses to relinquish its Socal Citygate premium, now its grown to $1.13 to PG&E and $1.71 to Border. The cash SCC is remarkable given how Nymex has been battered of late:

Poor natty, every time she stages a rally it lasts about a week, and then gravity takes over. I just read a “respected” consultant’s 25-year forecast of Sumas Nat Gas – the last ten years projected prices north of $6.00/mmbtu. Makes one wish you could trade against a consultant’s forecast, right? 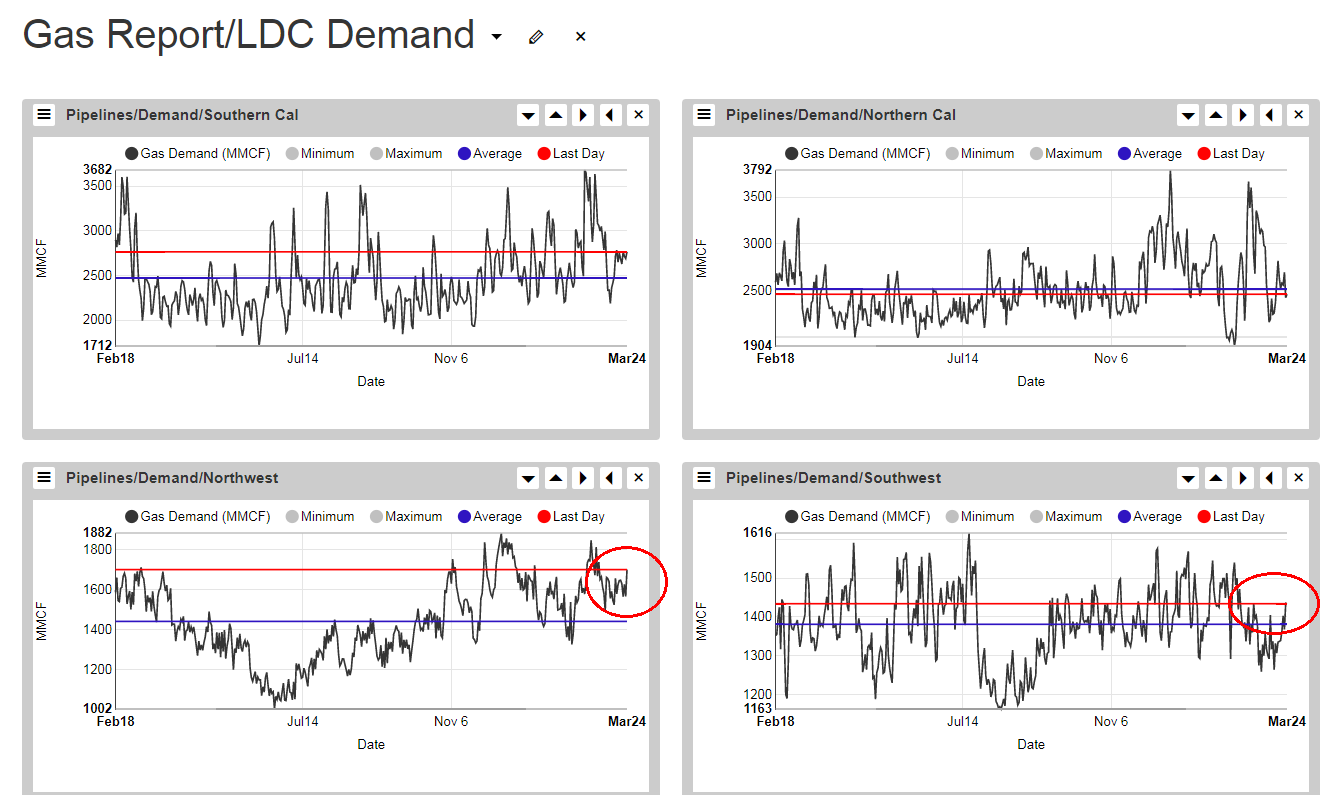 Our Core Gas Demand Index shows rallies in all regions except NoCal – now that zone is below its one year average, the only region to boast such bearishness. 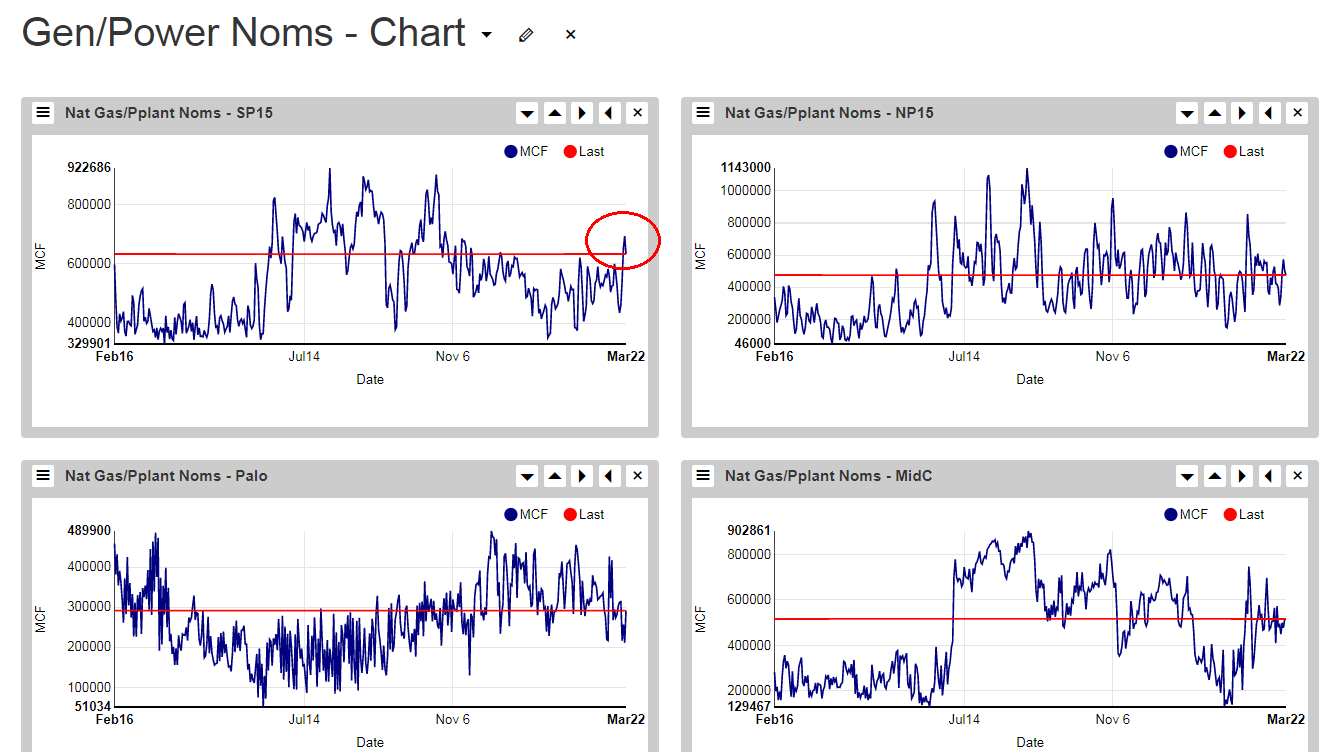 SP is showing signs of life in its power gas nominations; the hub sported the most significant week on week change. Unlike core demand, power demand for gas is pretty weak across the WECC. 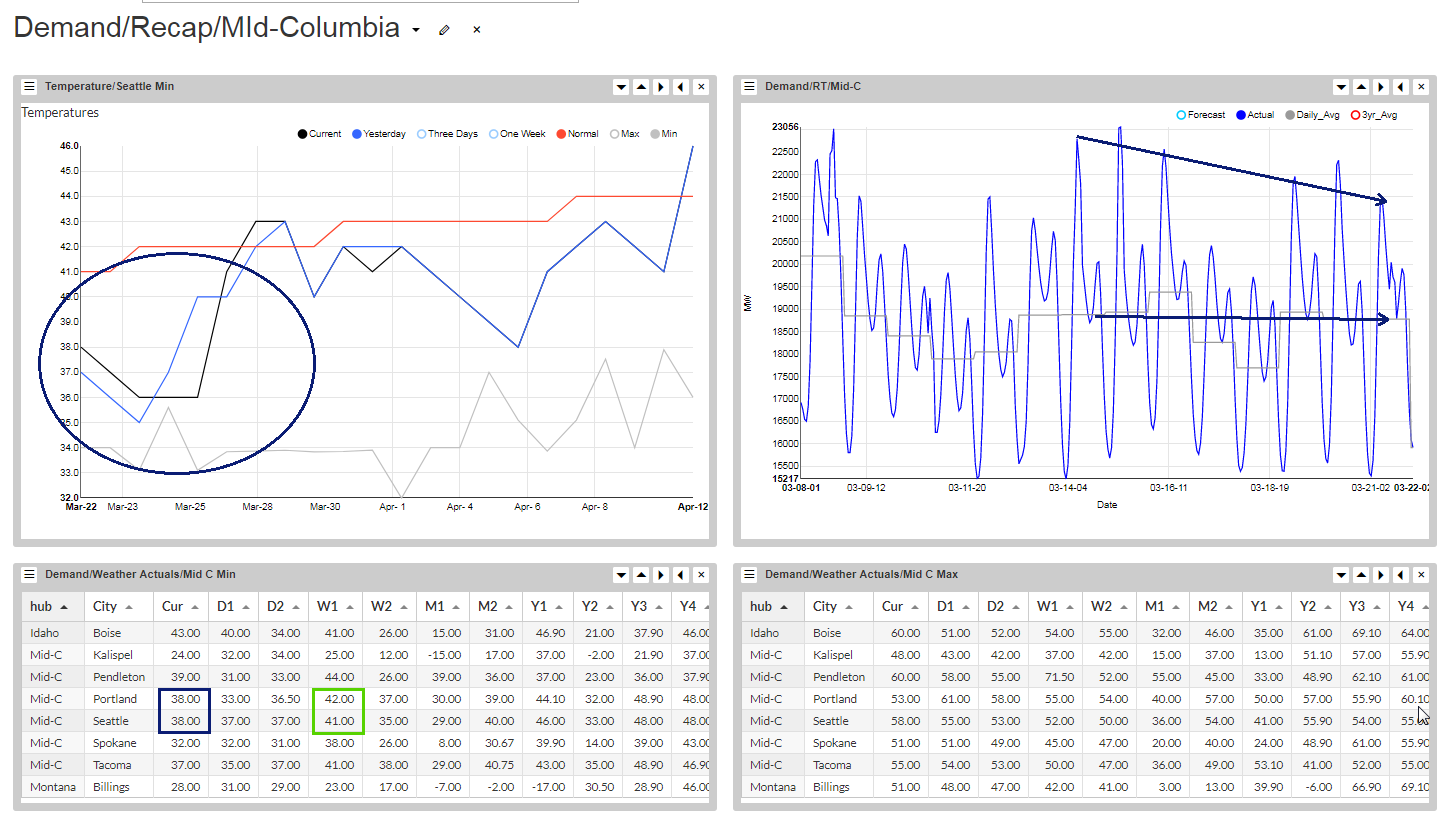 We’re not biased in favor of the Mid-C, as some claim, we’re just realists. Most of WECC’s springtime volatility is at the Northwest because of water; the only vol you get from the ISO and Palo is heat based, and there isn’t any of that, yet.

The MId-C is set to be cold for six days, then “warms” up to normal, but isn’t warm. I am increasingly focusing on the following dashboard when studying the Mid-C:

The first dashboard posted Seattle’s Min Temps which is appropriate since that is a “demand” dashboard; the one above posts min/max for Boise, Spokane, and Kalispell and is used to time runoff.  When most of the projected days are above normal get nervous; don’t be nervous today, 95% of the forecasts are below average and that takes us into the first week of April. More deferrals which render April-May more attractive and June-July more hideous. 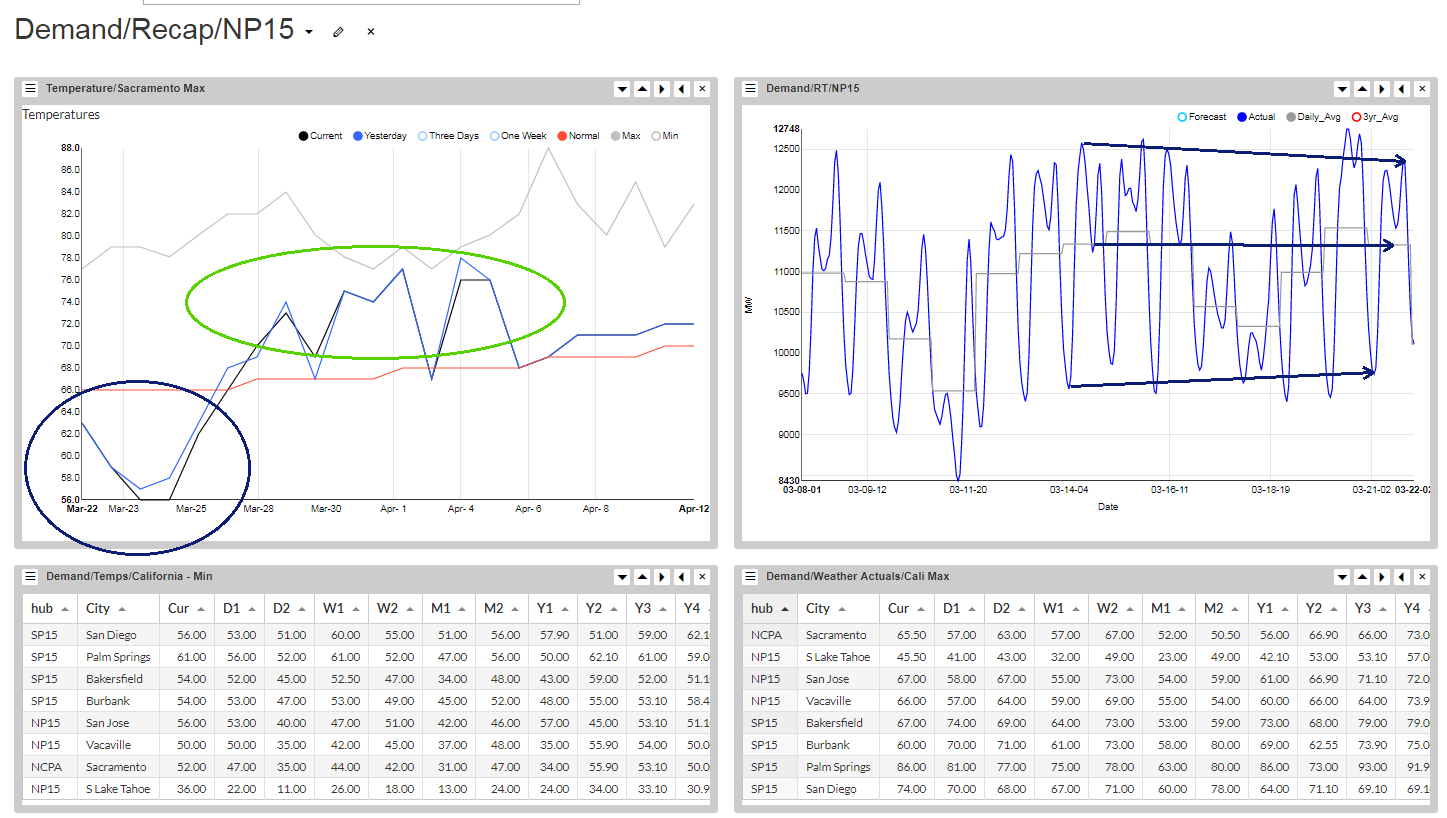 NP warms up after it cools down, and loads are just sideways. Its runoff outlook isn’t much better than the Mid-C’s:

More positive anomalies, but not big ones, and the snow above 3k is staying put. 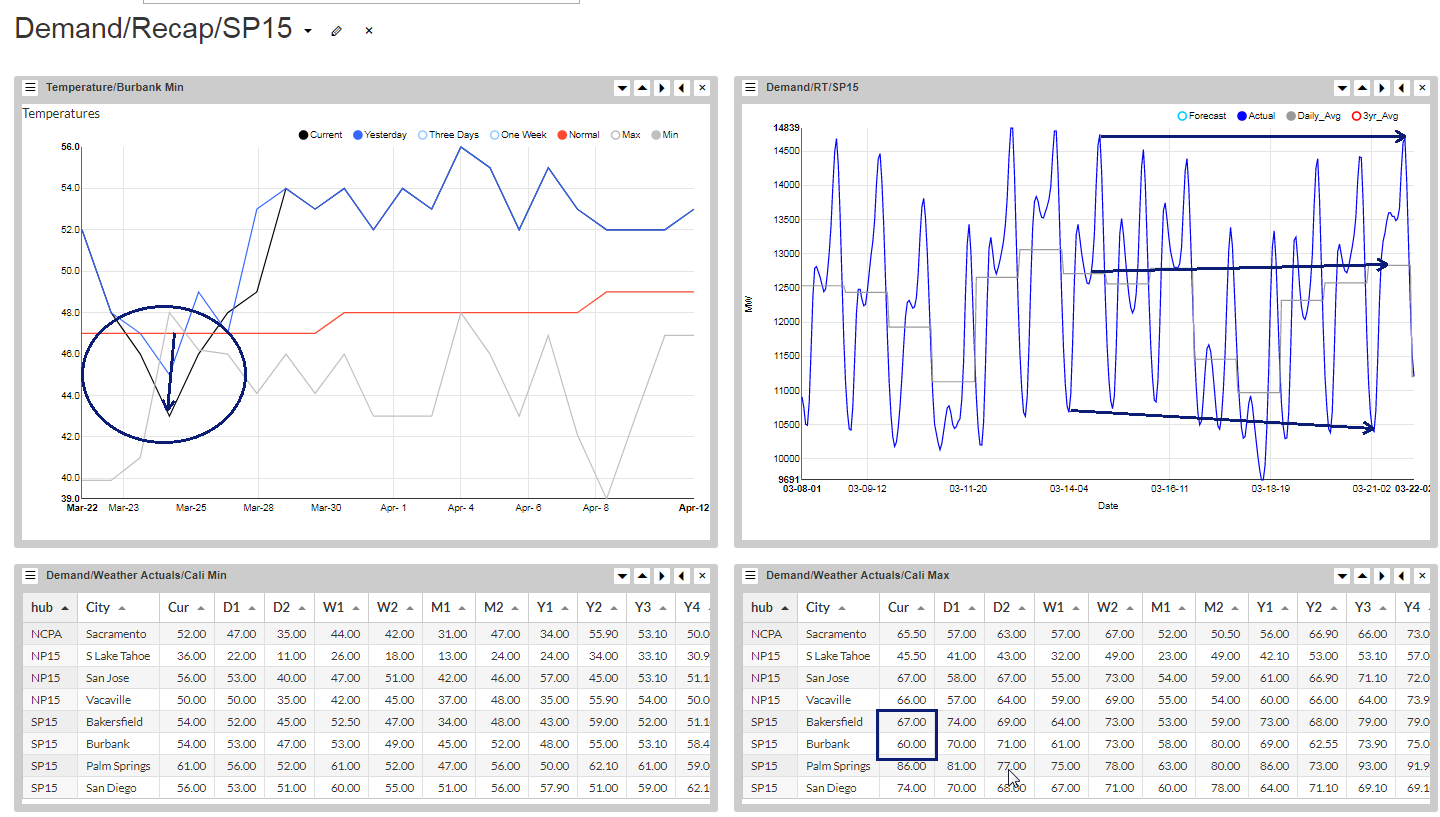 Sideways loads at SP – recall Noms rallied – blame that on renewables puking out, which you can blame on the clouds for puking out all that rain. SP is poised to warm up, but not hot. LA highs will approach the 80s but not get there; this weekend lows are in the low 40s, but its a 1-2 day event. 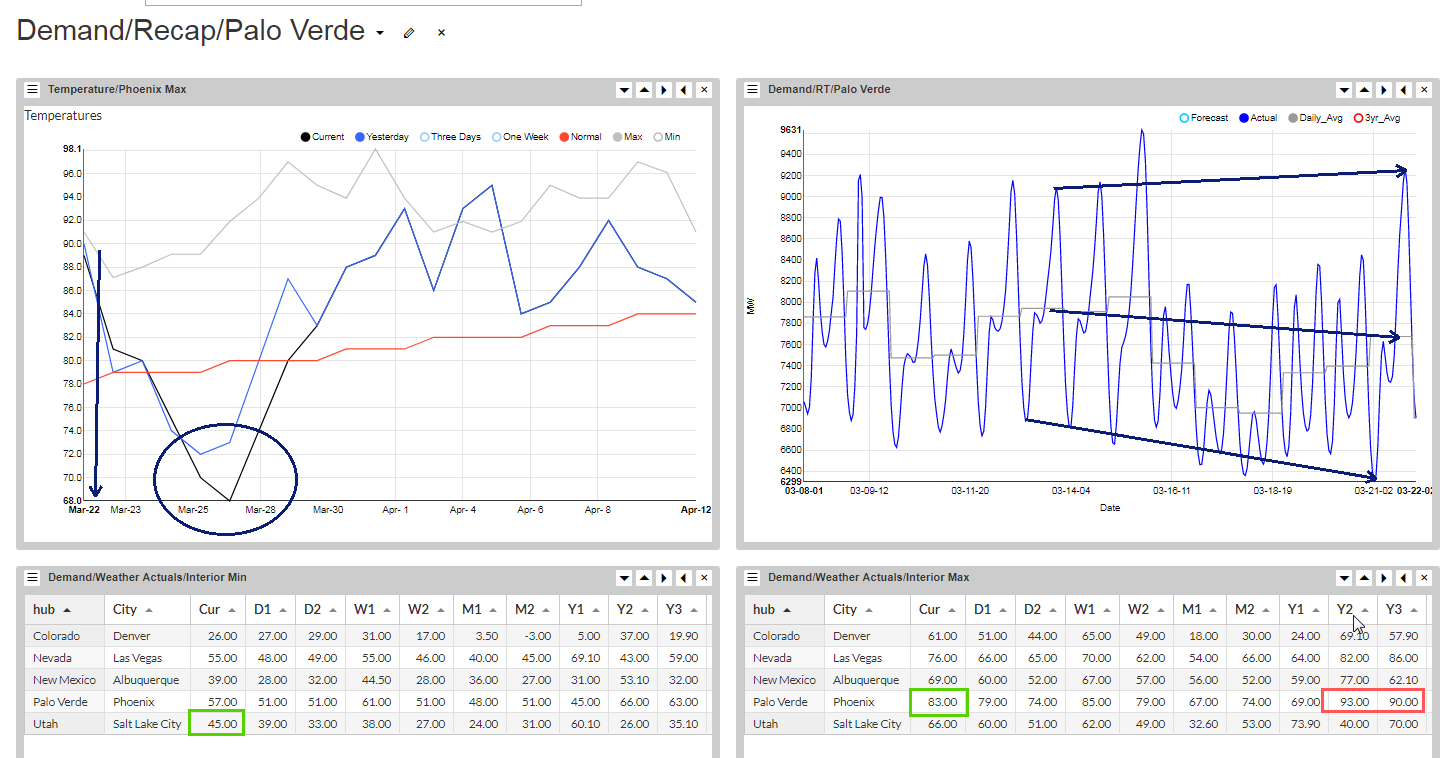 Phoenix is enjoying mid-80s, then temperatures plunge to 60s, before rallying back to positive anomalies; peak loads are up (AC), but average loads are off, week one week.

All that CA rain is starting to drive more production:

Call it 500 aMW, but coupled with the 5000 MW cut in renewables, the situation in the ISO is tighter than it been for a while. Short-lived, however, as there are just a few more days of rain, then its back to the sunny cal we’ve all known and loved.

Even NOAA agrees with dry:

I’ve never been a big fan of these pictures; they’re weather for dummies, but easy to read. Dry CA, but one more dump, and now the water situation inside the ISO is a lot more bearish for Apr-June, at least for 3-4 weeks somewhere in that strip:

A month ago, WY18 was code red, now its code lime green, like 2012-13. Should the state get violently warm, like the 90s in Sacto and 70s in Lake Tahoe, the snow will pour off the hill, and the 9kmw ISO hydro production will spill. If it stays mildly above normal, the bearishness will be mitigated. Bottom line, there are some new risks in Apr-June that weren’t there on Feb 22.

The Northwest remains on the dry side of things and is projected to realize about 40% of normal over the next ten days. This dryness hasn’t dented the RFC’s water supply outlook: 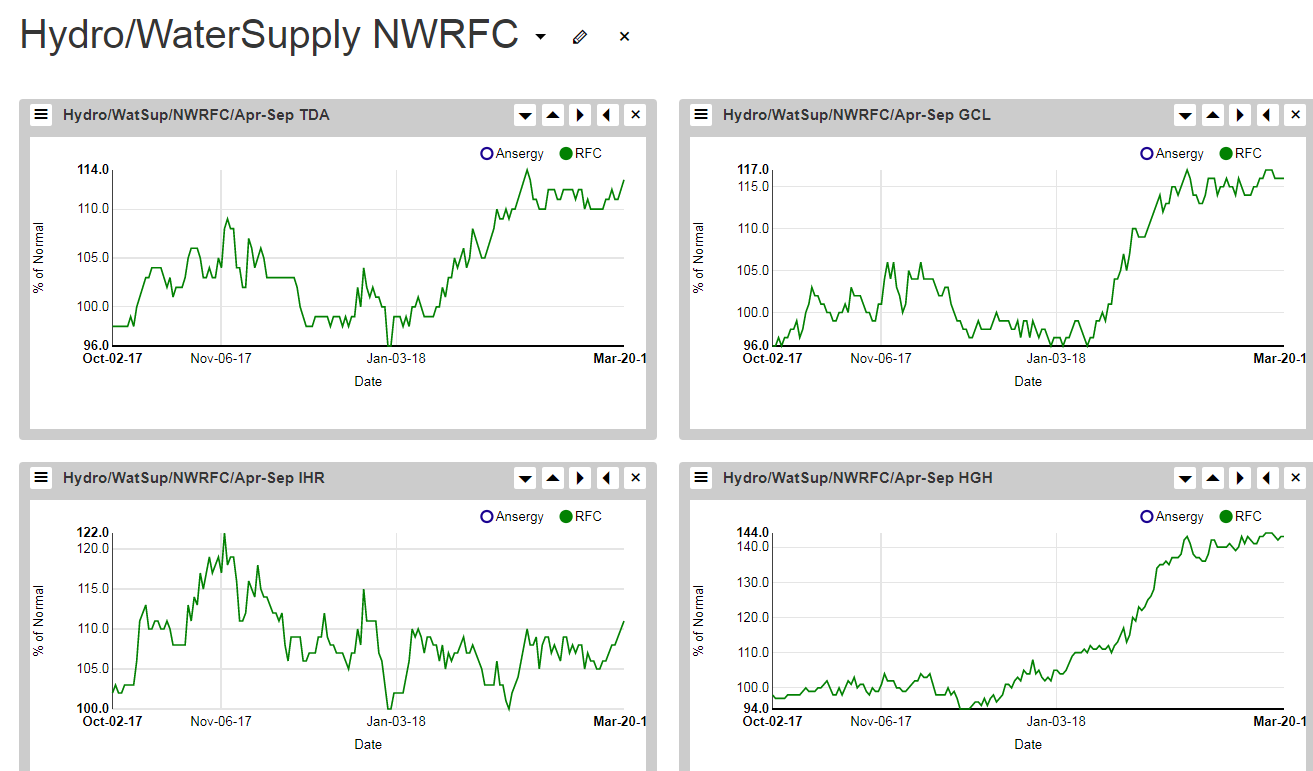 It’s not growing, doesn’t need to, WY18 is big. We suggested maybe an April revision to the GCL drafts, but doubt it now, these forecasts aren’t moving because the snow isn’t melting. Typically, there would be some melt in late March; there isn’t much if any. So the anomalies are stabilizing – the dry is offset by the cold. Doubt we see much of a change in draft, unless BPA can talk its sister agency into throwing it a bone. 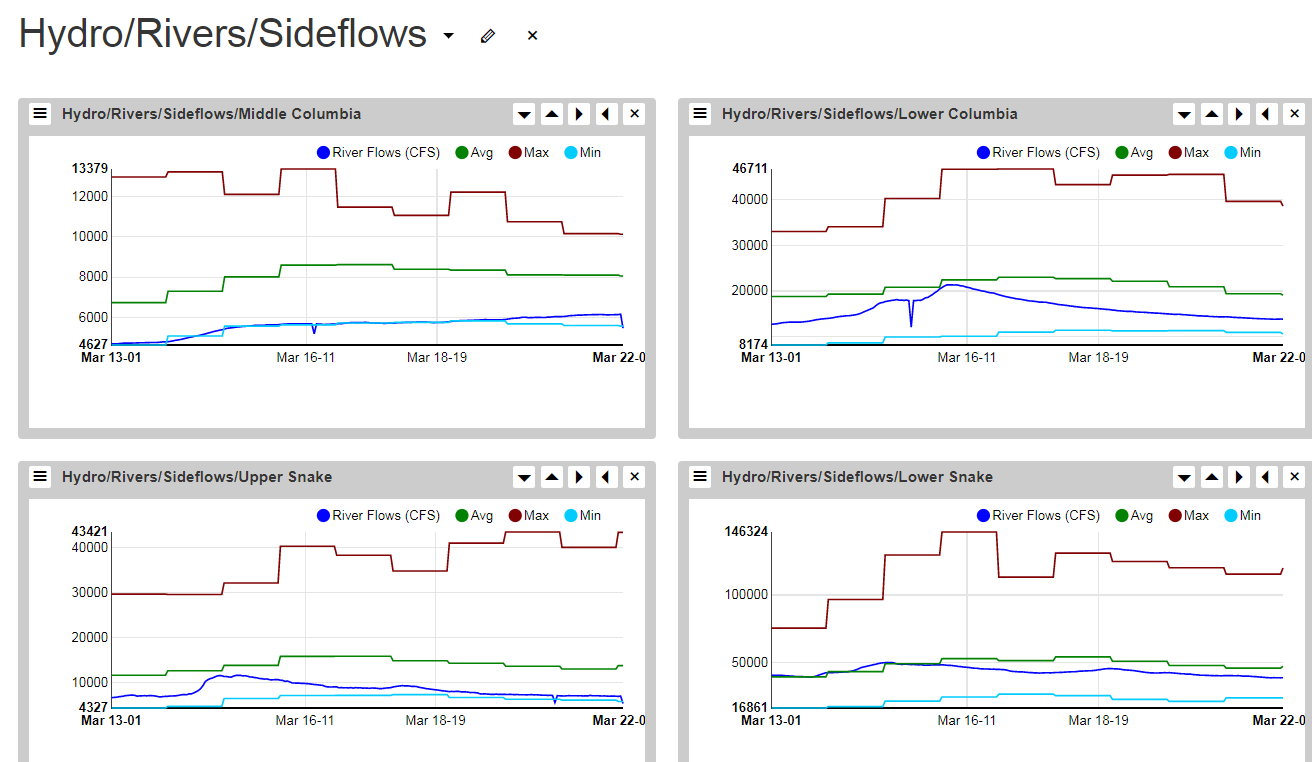 Side flow indexes are mired at ten-year lows and not moving, further proof the snow is staying put for the time being. 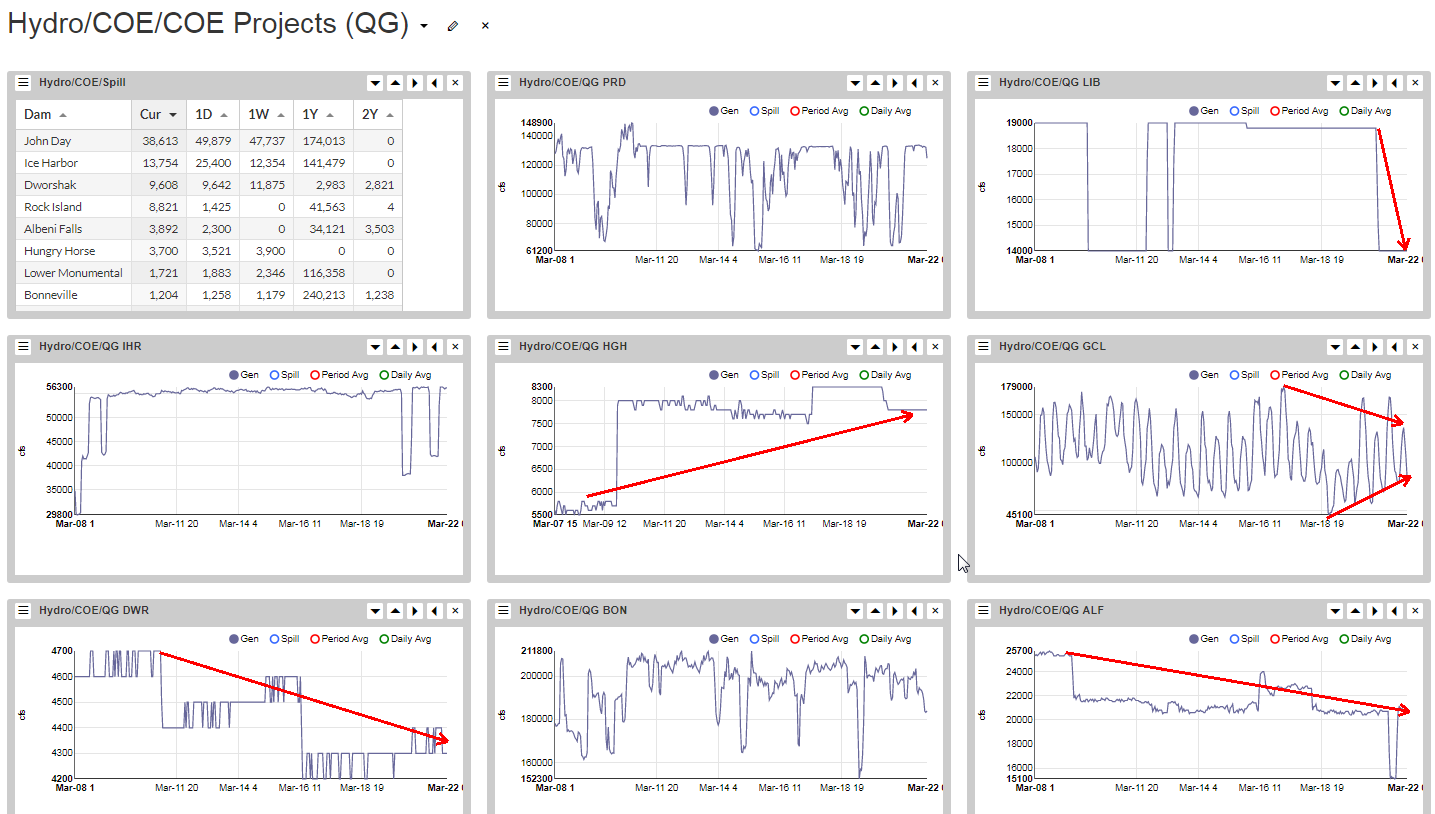 BPA is playing hide the pea, cutting flows on some, jacking on others – bottom line is they just don’t have a lot of bullets to work with. Most of the draft is now bobbing in the Pacific, sure they have 24′ at Coulee, but in a V-shaped reservoir, the last 24′ is the easiest to pull, and fill.

Coulee production is up slightly; the draft is suspended for the time being. BPA may commence drafting to serve load this weekend, if not they’ll start pulling around April 10, which is when the Spill begins. If things don’t warm up soon that spill will become a big headache for our fed friends. Last year spill was a big relief – there was too much water, but not this year, not unless it warms up. We’d expect about 2000 aMW less generation due to that spill and think that is partially driving BPA’s reluctance to draft any deeper today, in March. 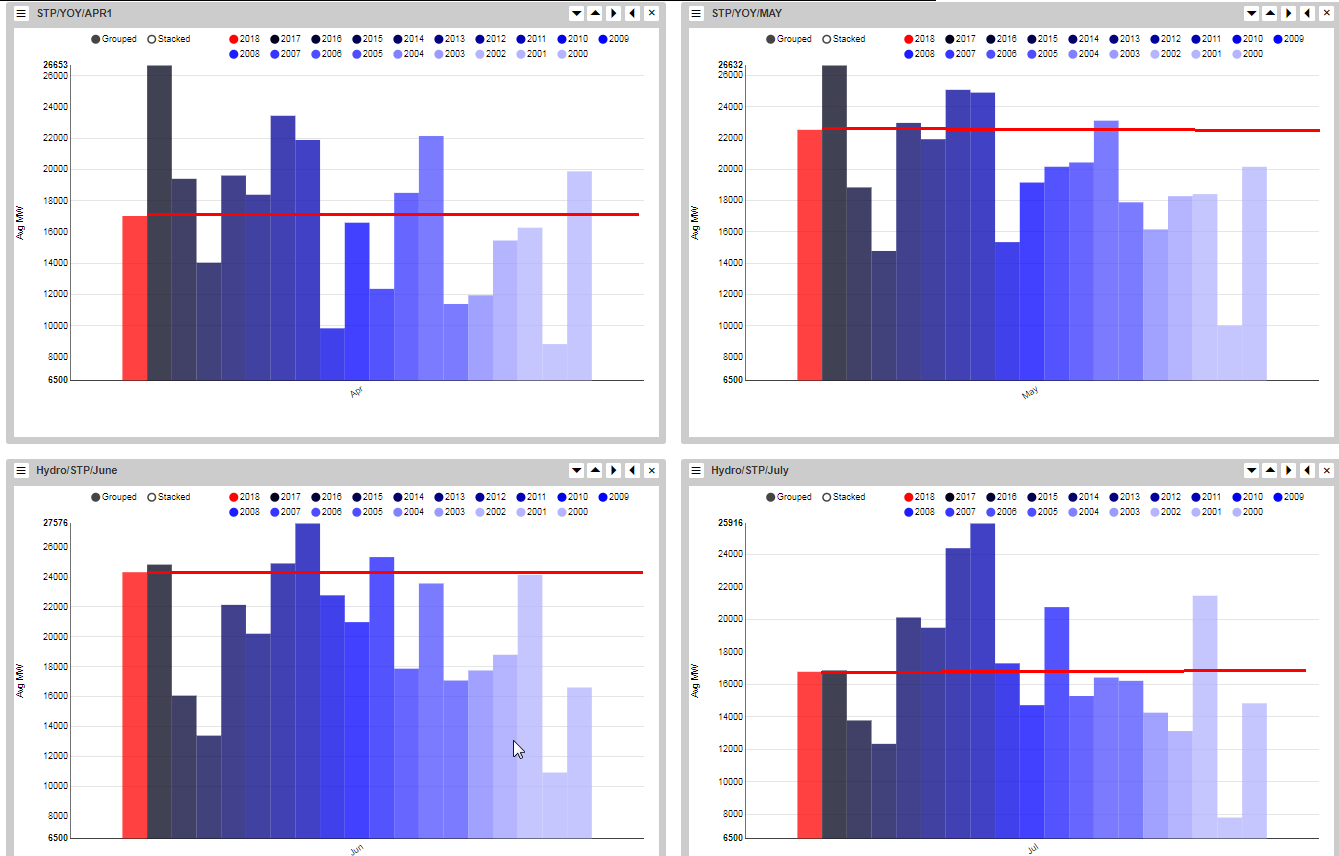 The above are plots of this week’s STP “energy equivalents”  by month. Each looks reasonable, to us, except July. You might argue April is light given that eight years had actual flows greater than 2018, but we think its spot on given reservoir elevations and the cold trend. July, however, is an oddity, you might argue June is too. Every cold day defers water which must be added somewhere but seems it is just being deferred to 2019, or ignored. Keep an eye on this, because the Slicers might find themselves a lot longer than they are today and start whacking July bids, not that July hasn’t already been whacked, it might get whacked more. 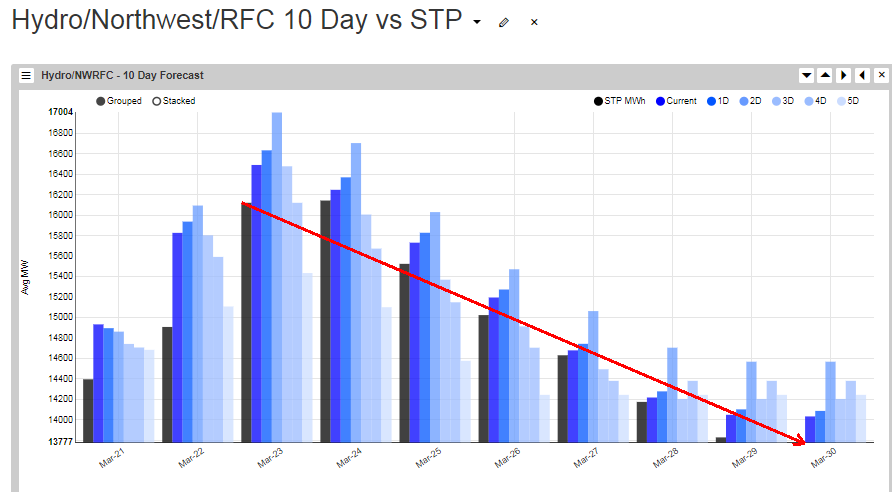 The ten day from yesterday confirms Monday’s STP,  but that isn’t what interests me – It is the 3000 aMW haircut expected between Friday and day ten, which brings us to the prompt. This also suggests/confirms that BPA has no intention of pulling GCL down for another week or two – they might even be worried.

No changes in BPA TTC, aside from a small cut for a few hours. 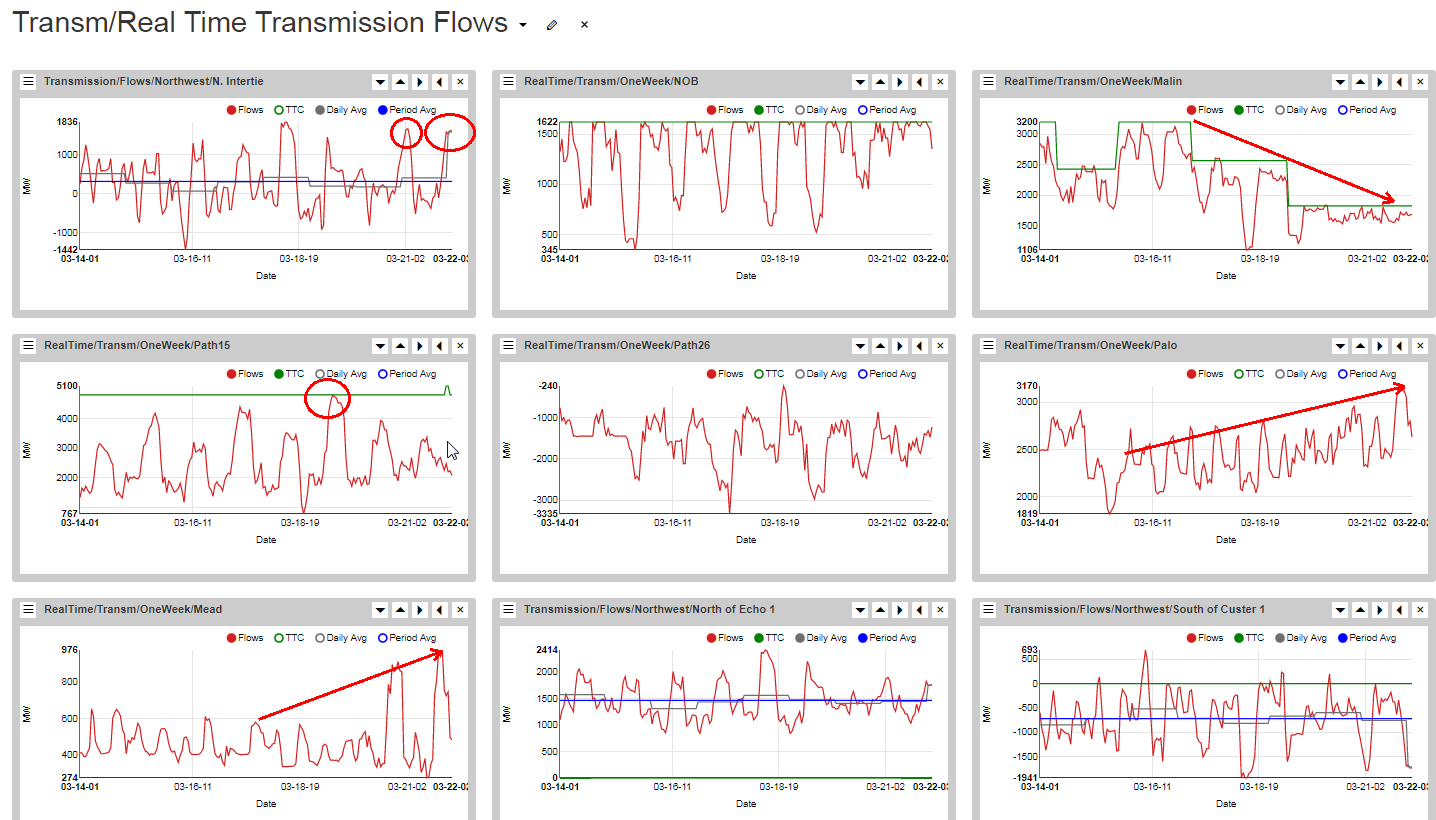 BC has been aggressively buying for a few hours, flows northbound exceeded 1000 aMW for several hours. The AC is mostly full; in fact, yesterday it realized its highest utilization factor in the last nine months. The AC is severely de-rated; Path 15 hit TTC, Palo has nearly filled its line, and check out Mead – that dead line started puking energy into SP.

Action, if there is any, will be in the Northwest as it remains cold and dry. The spill is looming, just ten days away. The snowmelt is like a compressed spring, every cold day compresses it more, which just stores more energy for when it eventually “springs.” The only question is when that will it occur. Per this forecast, we don’t see it.