All four months through June posted gains in this week’s update (July continues to trickle in, with the latest figures down).  March showed the largest boost with an additional 981 aMW, adding to the now several-consecutive weeks of gains.  April was a bit more subdued though still added 394 aMW.  May followed up last week’s gain with another 233 aMW.  June reversed the trend of three straight declines in forecast by adding 538 aMW this week, making up for the declines over the past two weeks.

March’s gains stem from a sharp increase during the 22nd-28th where as much as 2,700 aMW was added to the forecast (24th).  April showed an increase as an aggregate, though this precipitated over many days with moderate increases.  May had enough early increases to negate a period of decline from the 16th-20th.  June began the month with decreases then reversed the trend by the 19th, finishing with gains as high as 2,600 aMW by the end of the month.  July extended those gains a few days into the month before tapering off. 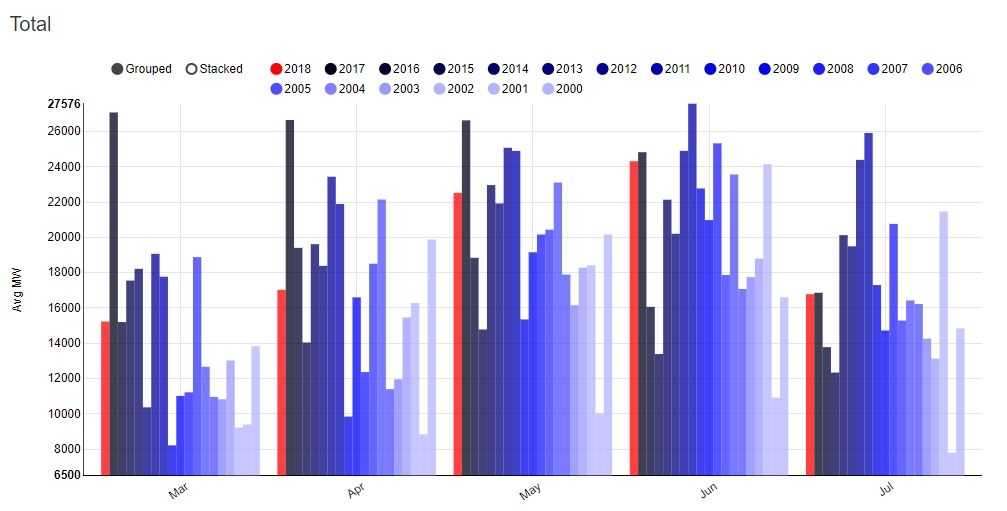 March had enough gains this week to pass 2016.  While Apr, May and June also had gains, none were enough to pass one the previous water years in the most recent update.

MIKE NOTE: July is a colossal mistake, in my opinion.

Eight prior years realized higher energy equivalents than 2018. Granted, the Snake is either normal, or slightly below, but the Upper Columbia is a record. Which basins feed July? Not the Snake, that party is long over by then, it’s the Upper Columbia:

And the melt is undergoing a significant cold weather deferral. I still think July is due to receive another 3000-5000 aMW equivalents before it goes delivery – unless big heat besets Montana.