It’s almost officially spring, but a few days away, yet the WECC is mired in coolish weather, ghoulish if you’re long and expecting AC loads. Even Phoenix is finding no reason to fire up their ACs, forget about the rest of the WECC, way too cold. But its almost spring and cold weather does more than drive loads, it also “freezes” the snow and keeps that stored fuel on the mountains and out of the turbines. That is quite bullish for the Northwest and has ramifications for the runoff bullets – bullish ramifications for the near term and equally bearish for the back.

Week-on-week (WOW) is mostly off in the Day-Ahead LMP, though Sunday turns out to be the premium day for the week. Go figure. Palo congests in the solar hours, but not all days or all hours, suggestive of either weak solar or an ISO appetite for outside power. Probably the latter, given that Socal Citygate remains the premium WECC gas hub: 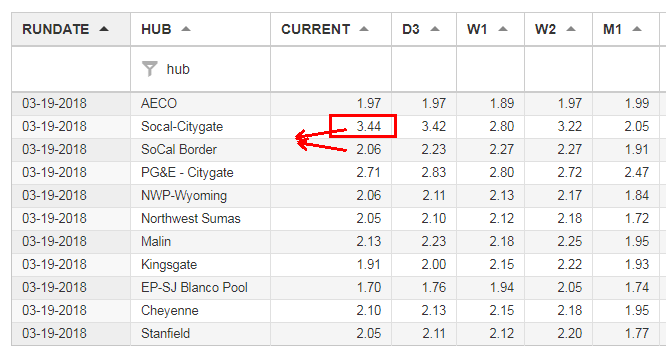 Commanding a $0.75/mmbtu premium over PG&E citygate and an even more remarkable $1.38 premium to Socal Border. The fear of gas shortages remains, a concern that is mostly unfounded as the likelihood of LA posting lows in the 30s is next to zero. Current SCG demand was off over a 1 b/day from the highs a few weeks ago: 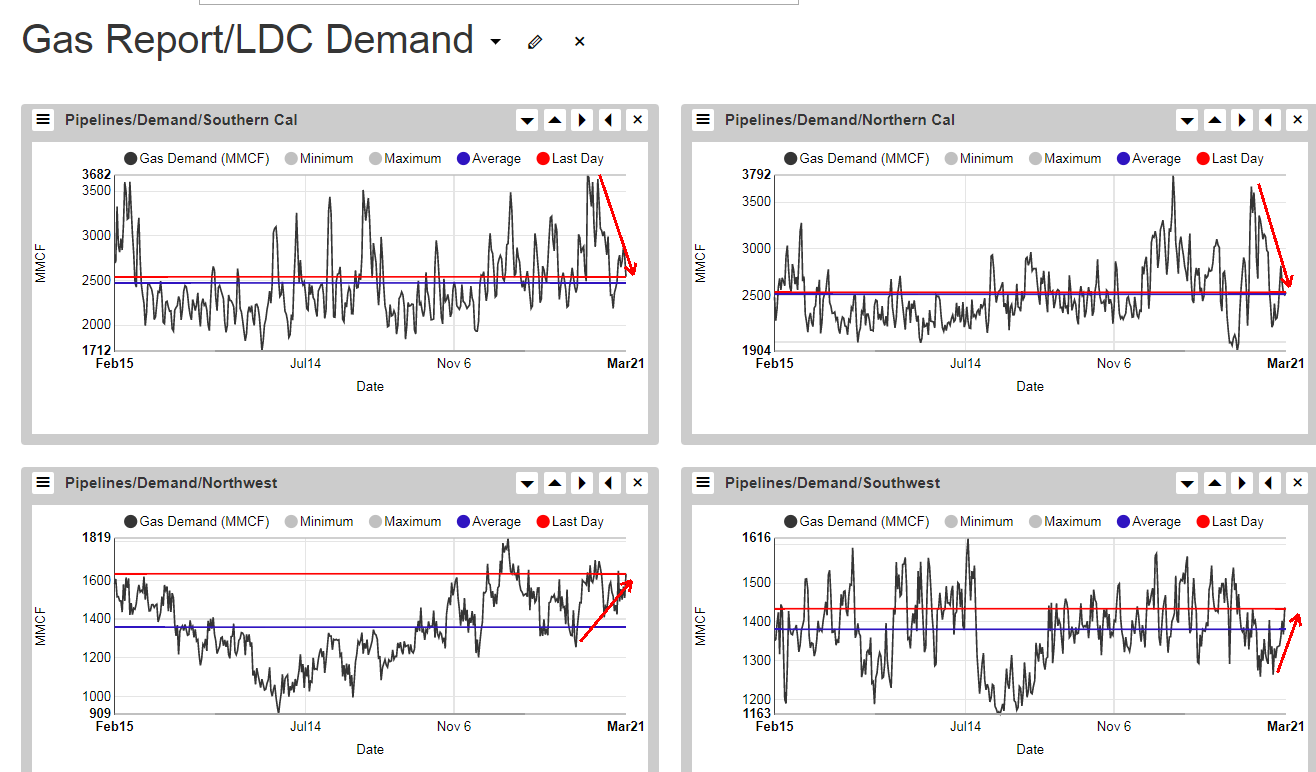 And not just in Socal, Nocal is off an equal amount. Outside, both the Northwest and Southwest are up, slightly. 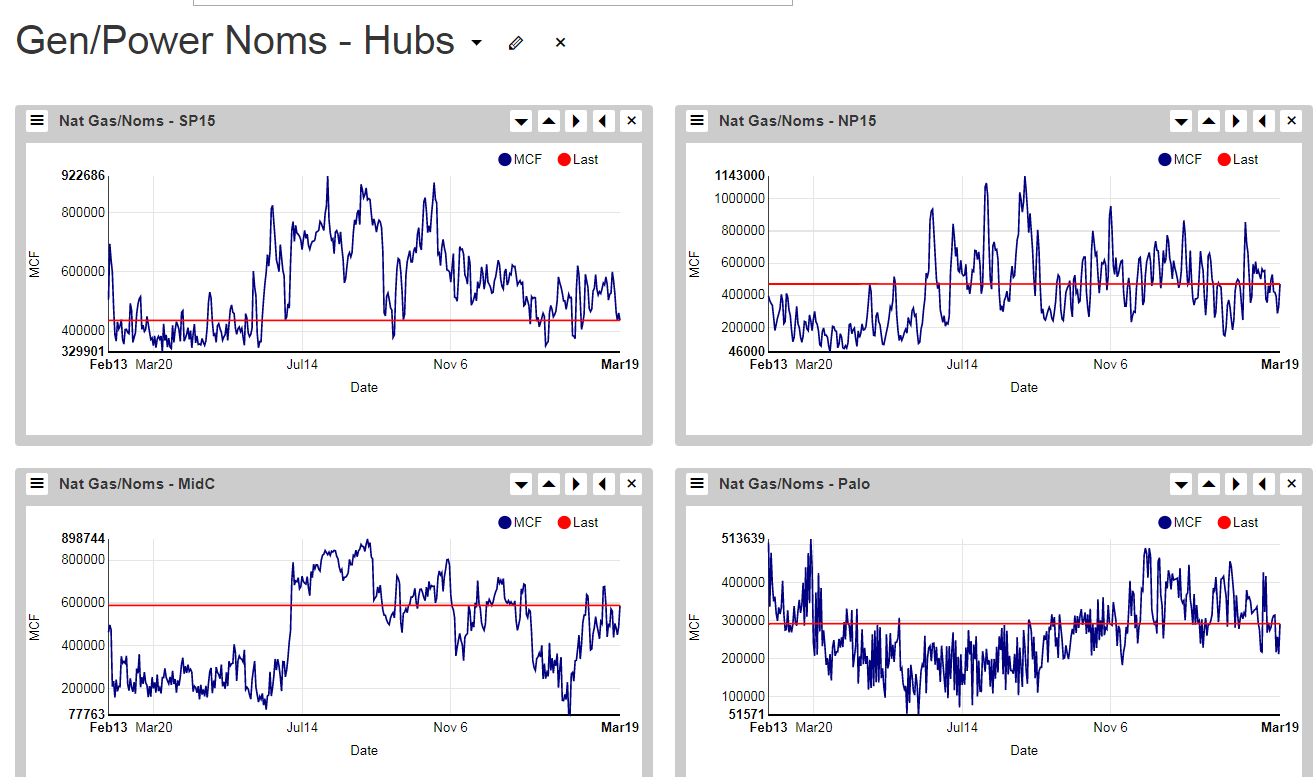 Contrast Socal’s total system demand with its power plant demand – all of the spike was from core, non-power, demand. Without cold temperatures, there will be no spike; there isn’t any bitter cold in store for LA, hence our conclusion that these SCC premiums are over-bought.

The term gas traders agree SCC lags PGC. Another change, the gas glut in Permian has driven its price to parity with Sumas, a first for the year. 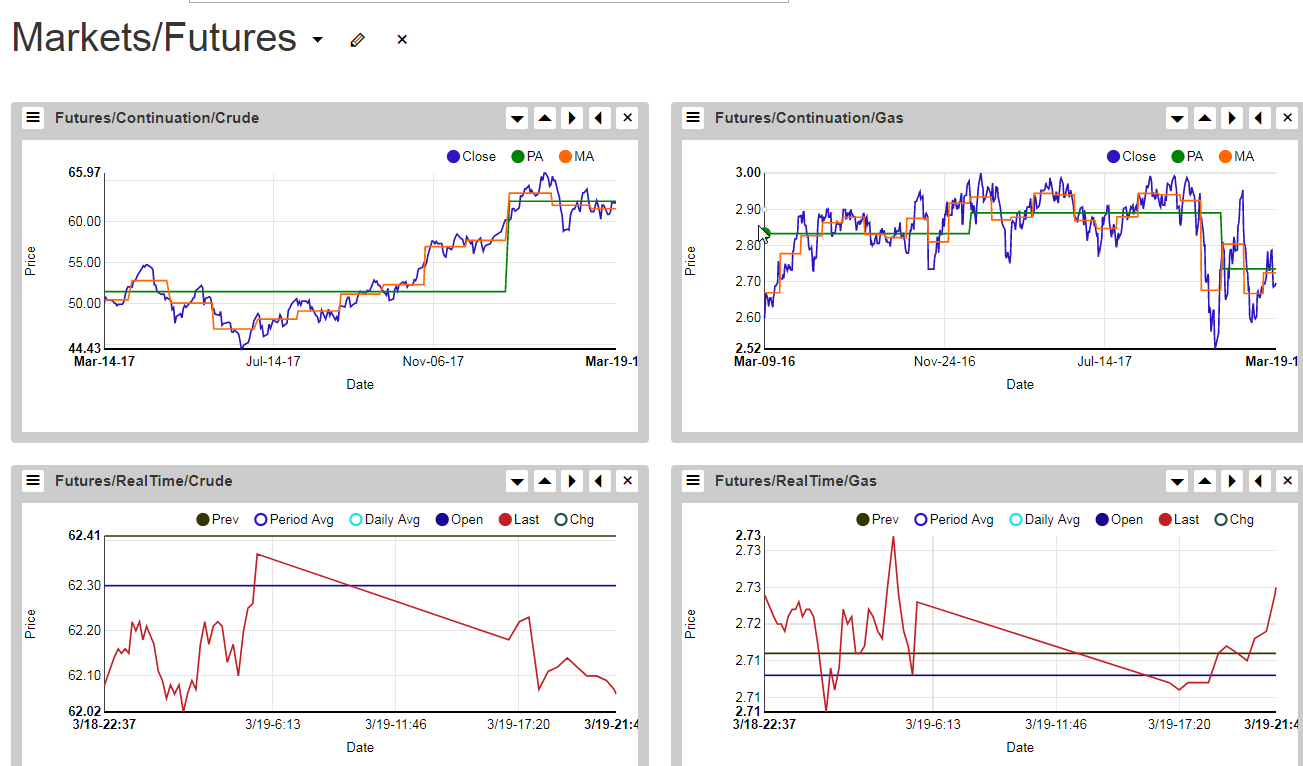 Crude’s opened a bit weaker, but gas is up on Nymex from early morning lows.

NOAA has the west cold, then warming in the 8-14 day. Those anomalies are relative; its “almost spring,” so dark blue in late March would have been red in early Feb. 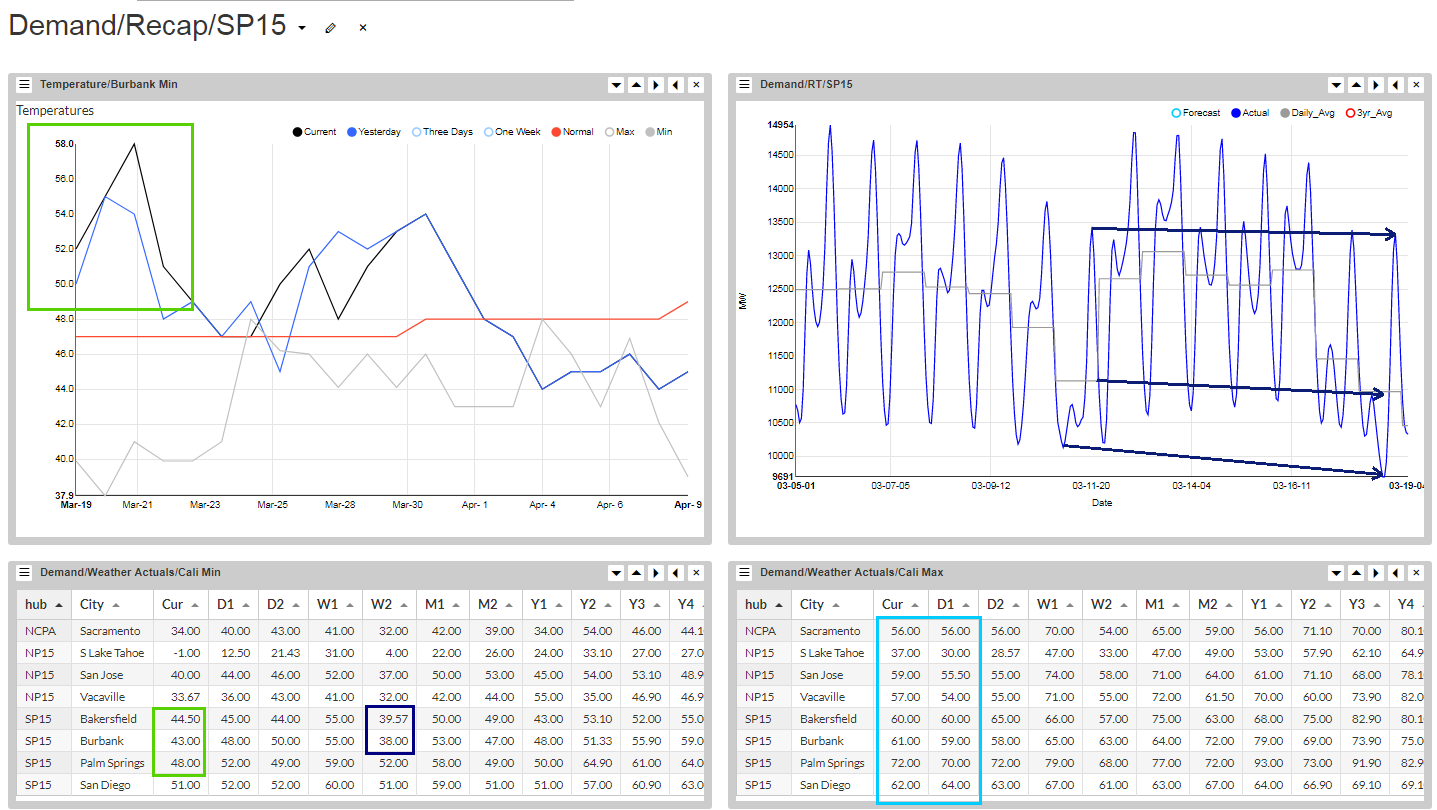 SP’s loads are just sideways, there is very little power plant demand, and now the hub will realize positive temperature anomalies for most of this week. You fear SCC? We don’t. 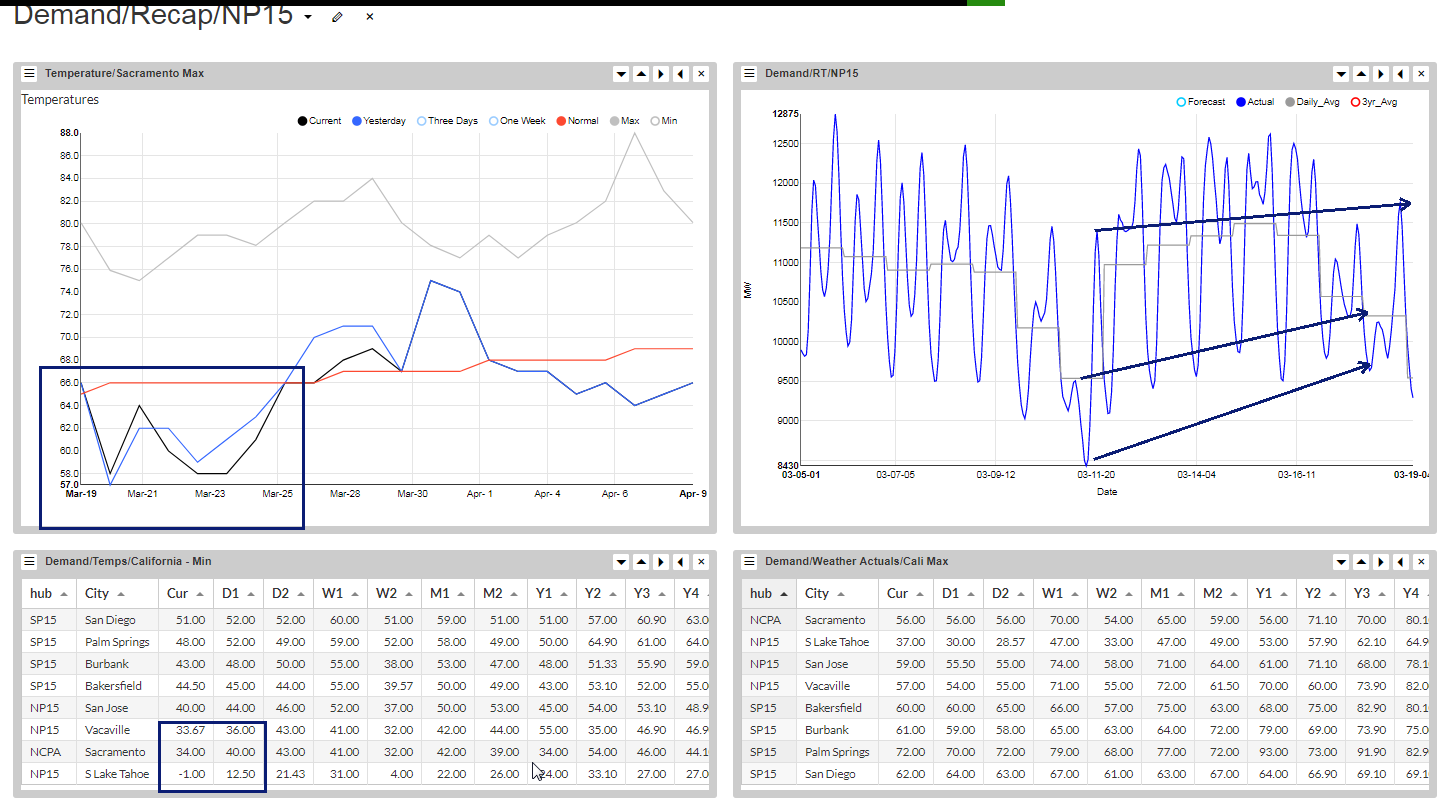 NP’s demand is up, and its HDDs are up, too, which speaks to how much electric-based heating load is in the northern part of that state. Check out the lows at Lake Tahoe: -1. Seems hard to support a $0.75 premium at SCC vs. PGC. 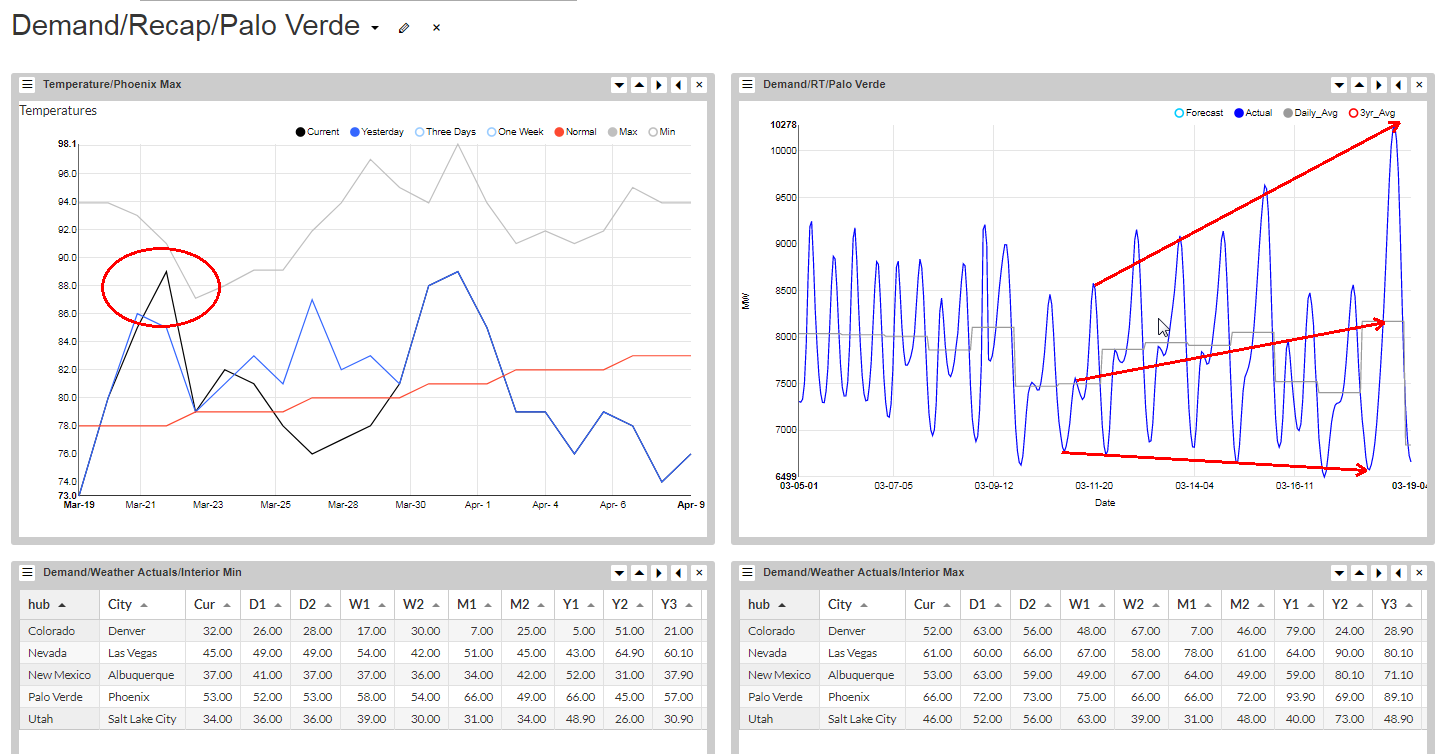 Phoenix was chilly over the weekend, but by week’s end will chase its first 90 handle of the season, and look at the upward sloping climo; every day jacks another degree. PV’s loads soared, but we think the EIA has an error in its numbers, don’t bank on yesterday’s high staying. Most likely, one of the Palo BAs posted a bad number. That aside, PV is going to see a rally in demand this week while SP just goes sideways. 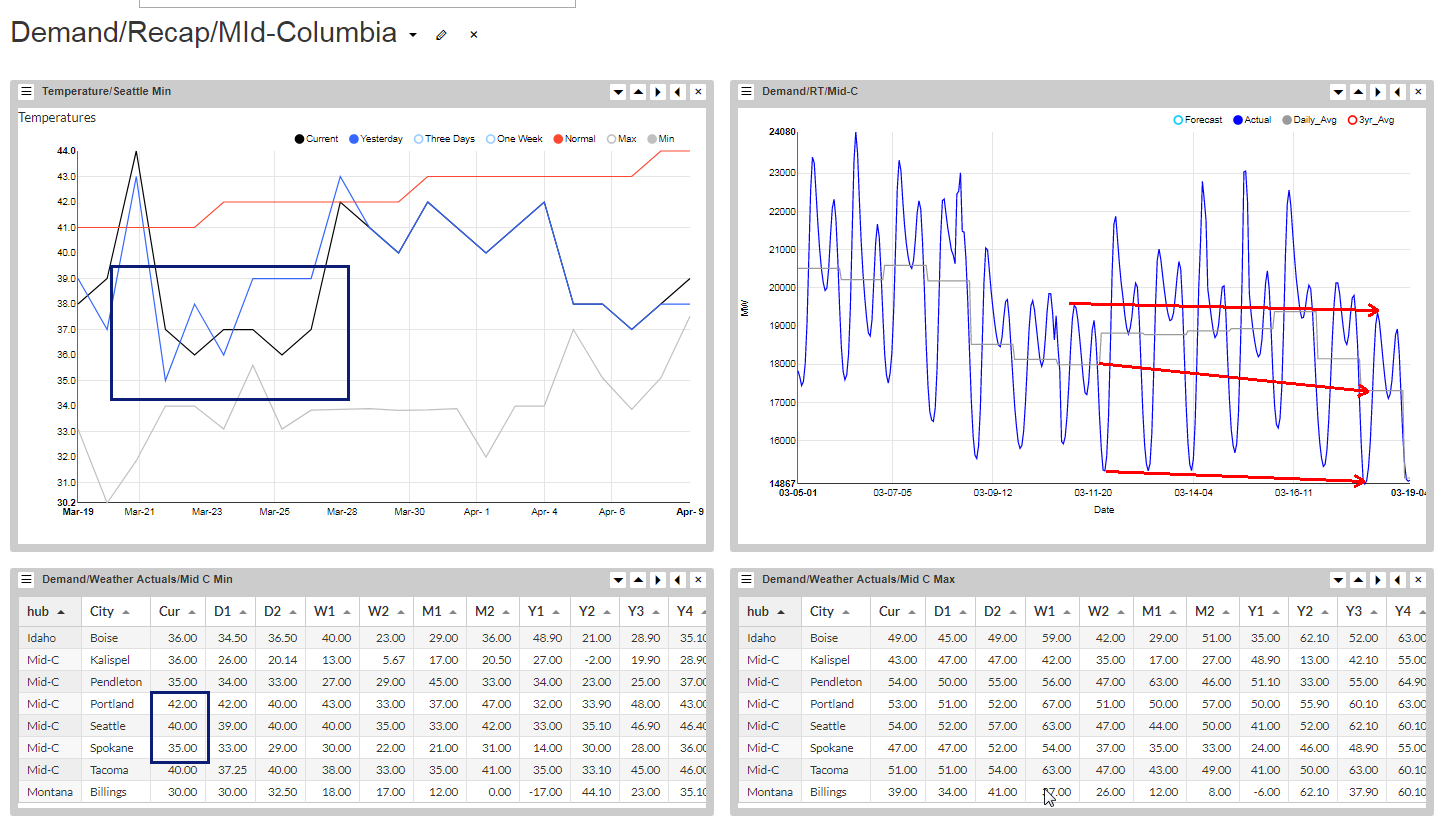 The Northwest will grow colder after it works through a couple of nice days. Its loads are just sideways but will rally later in the week. The takeaway here is cold is bullish for MidC in March because it drives loads and cuts natural river flows. Let’s look closer.

This is a new dashboard that returns the Min and Max temperature forecasts for Boise, Spokane, and Kalispell. This is what we’ll be looking at every day from now until the runoff starts. When these forecasts post positive anomalies, watch out. They are posting negative anomalies, and we’d be getting longer in BOM and April, maybe May, while we short more June and July, maybe August. The max line in the Max plots (top group) gives you an idea of how warm these stations can get at this time of the year; they are all 10-20 degrees below that. Don’t expect any freshet from today’s forecast.

Similar story for California, not many days above average. Not that CA has a lot of snow to melt, but those anomalies are growing and where a month ago the state was looking at one of the dryest years on record, today its slowly approaching normal. Where there was no risk of taking any plants to hydraulic capacity a month ago, today you should expect a few weeks where the state has most every plant at max. When will that occur? Not in the next couple of weeks, that is certain.

More rain/snow is heading towards the Sierra’s this week. Just when the ski operators are planning on shutting down, the snows arrive. Too bad most skiers are burned out of snow by late March. What a waste, but all this late snow should put a brake on runaway NP and SP spring prices. Might want to re-check your spread valuations, the world is changing.

The Northwest remains dryish, not “bone dry,” just about 40% of normal.

Where the MidC was staring at a massive snow year, now its still massive, but not growing.  The following are snapshots of NRCS snow water equivalent anomalies: 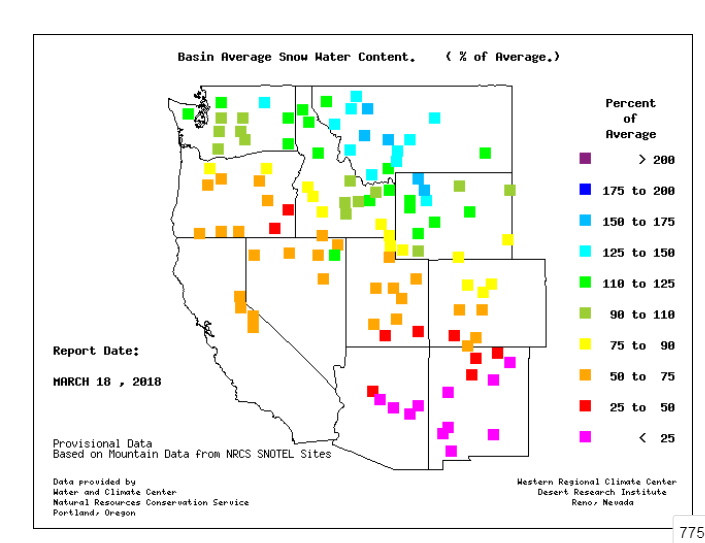 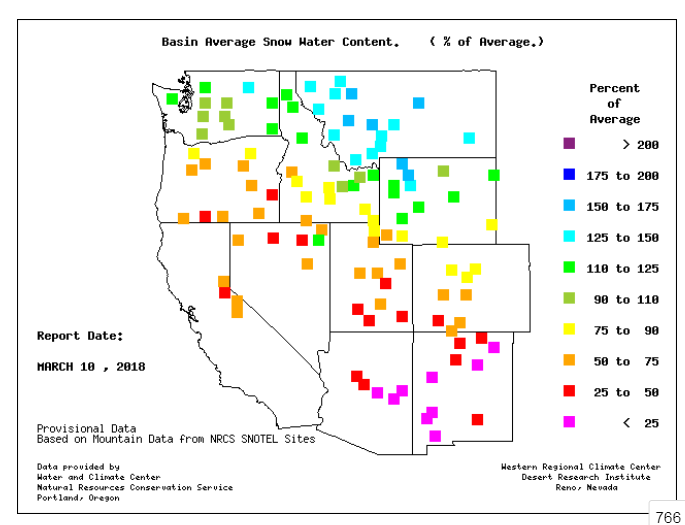 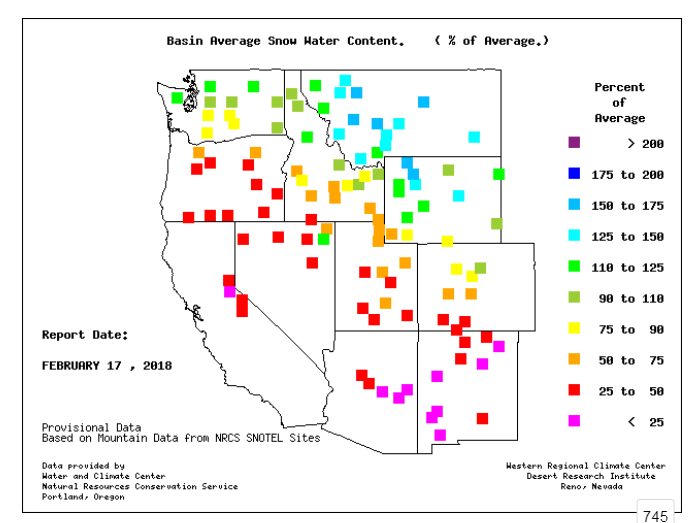 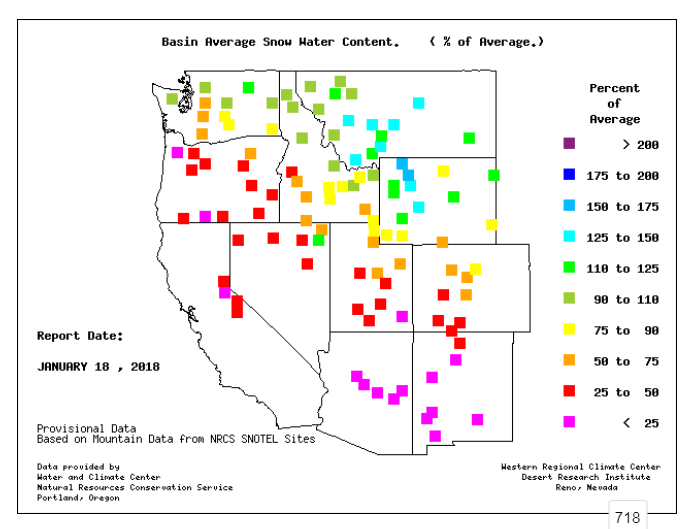 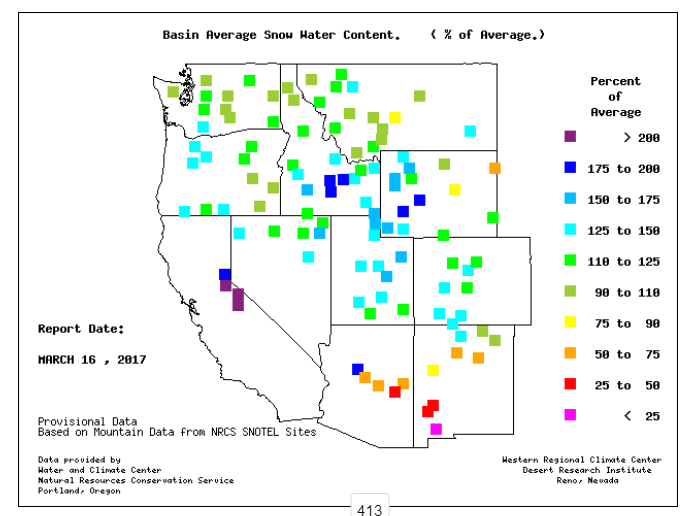 Just goes to show the water year isn’t over until the fat lady sings, and this one is far from over. Even if it didn’t snow another flake, the Northwest is looking at a big runoff; the only question is when will it come down? The market has priced must runoff bullets as if the runoff already started, they are wrong. More on that later. 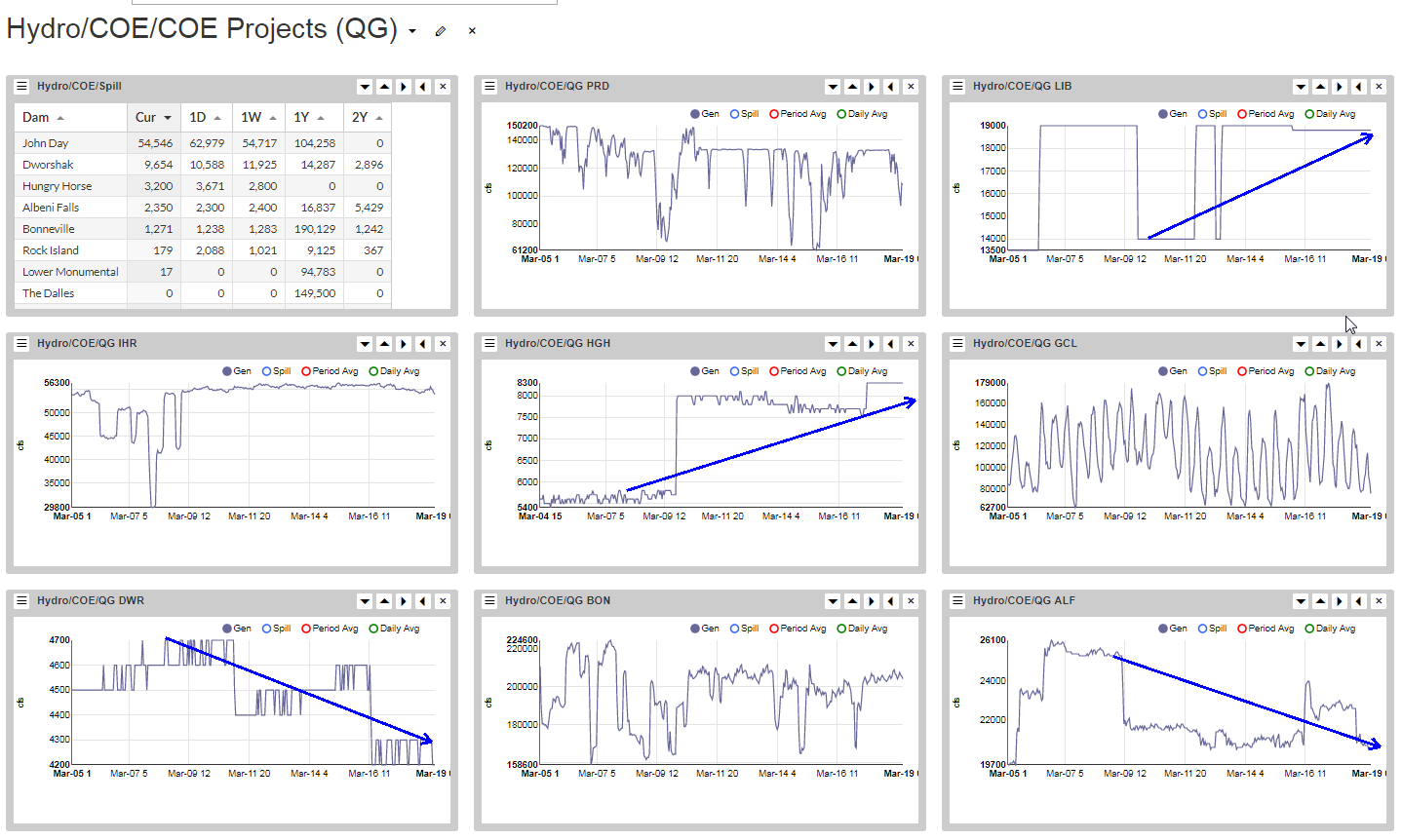 The only Northwest flow volatility arises from regulation; two of these Corps projects are up, two are down. 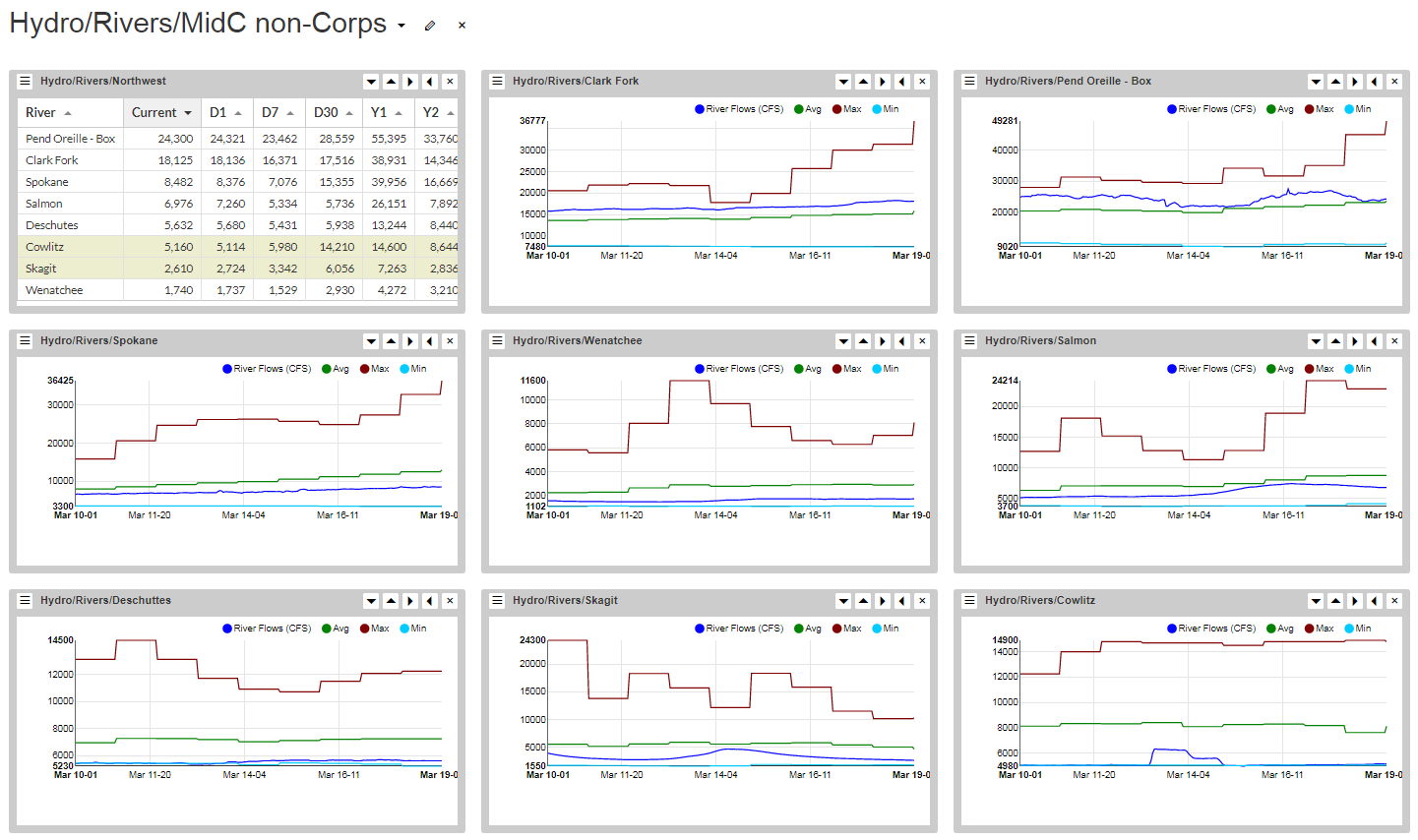 These are non-federal projects, mostly, and are remarkable because of how low the flows are, and how low the volatility is. Reminds one of the old cowboy movies where they’re all sitting around the campfire saying “it’s too quiet.” It is too quiet, but that won’t change for a few weeks, at the earliest.

So you fear April, that draft to 1228′. Well, fear it less, BPA just knocked off three of those twenty-seven feet over the weekend. And, drumroll, average flows fell. LOL. Talk about tight. At that pace, the end of April targets will be met at the end of March, but the only problem with that is the April Flood Control will most likely “Raise” the draft target, perhaps to 1233 or so. Hah, and you are short April? 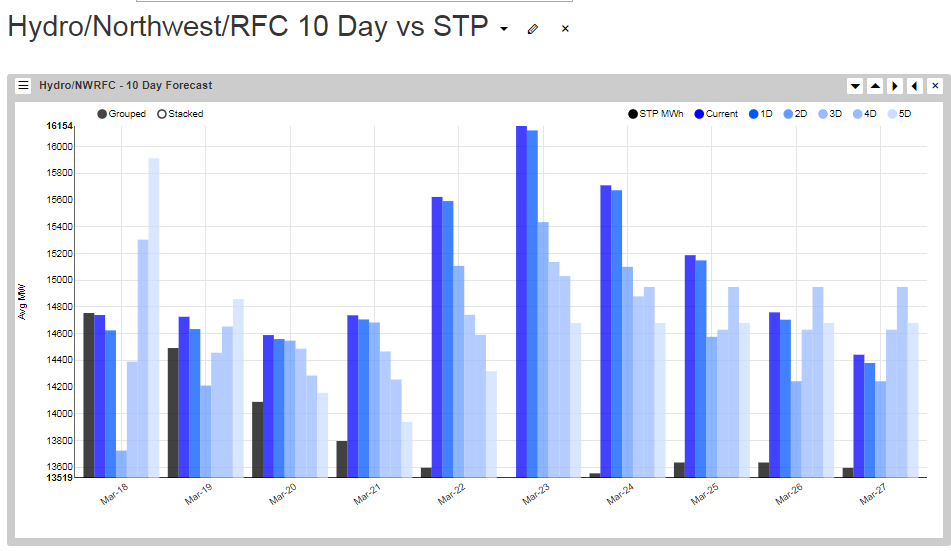 I guess you should be short if you only use the NWRFC’s ten day; these folks are quite bearish on the BOM, relative to last Monday’s STP. We always felt March was light, but with the cold and dry weather forecast maybe it isn’t. That said, today’s STP bodes bearish BOM, but we think that must be bullish April, but doubt the feds capitulate much on their April numbers. 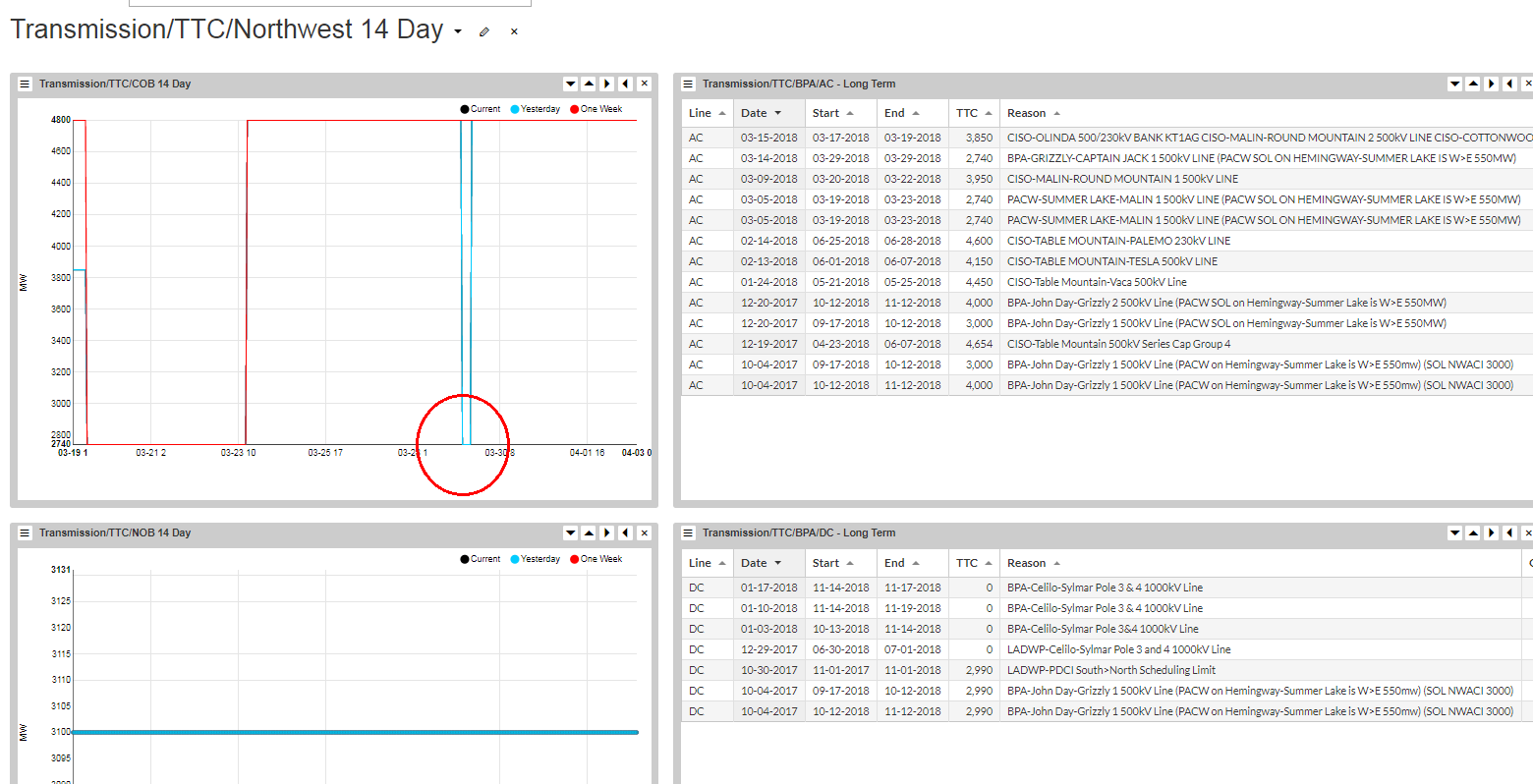 One brief change in TTC on the AC from a week ago. 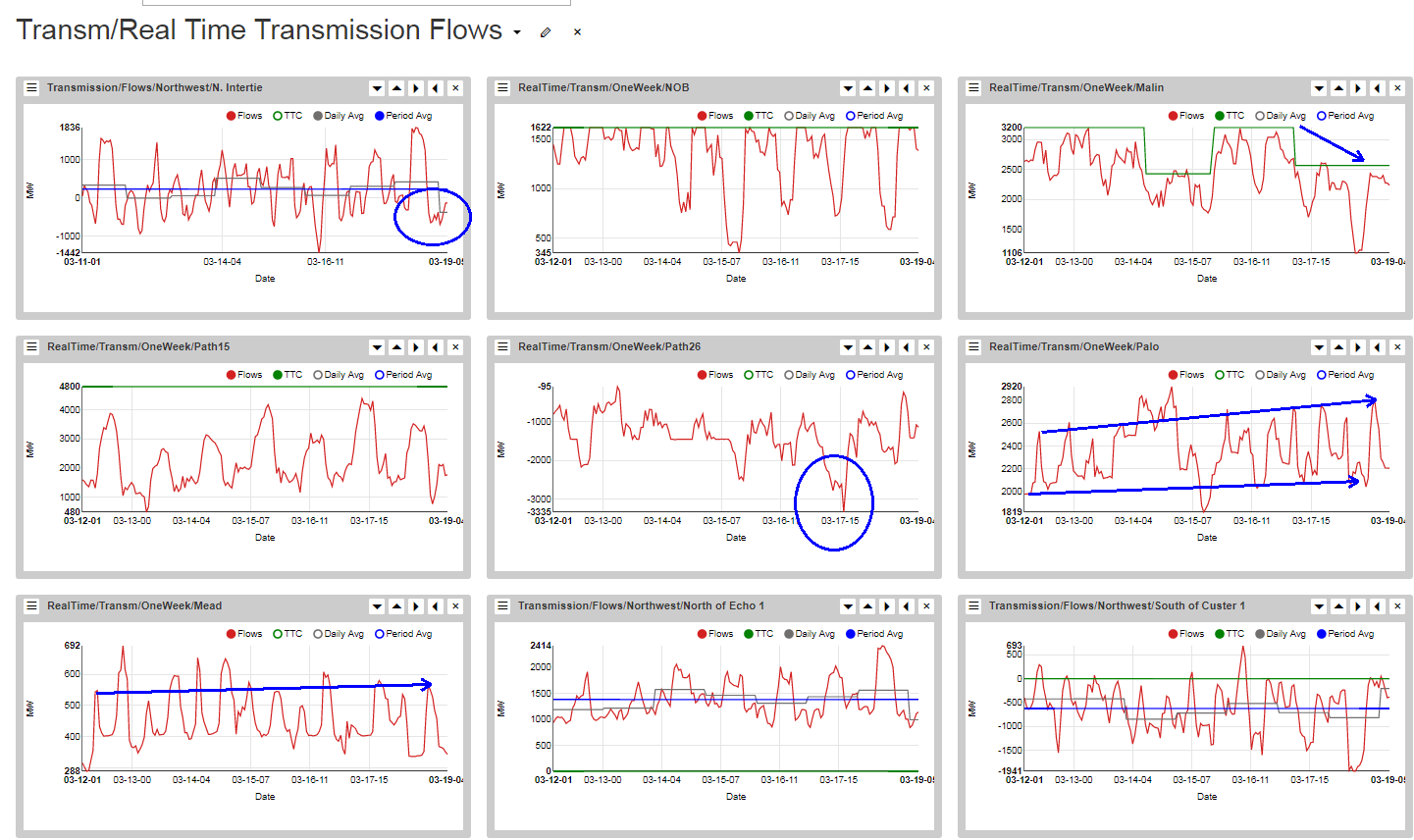 BC sold some yesterday, but mostly the line remains under-utilized. The AC and DC are more full than not; SP was a big buyer for a few hours on Saturday, nearly 3000 flowed south on Path 26. Palo exported more than last Sunday, Mead about flat.

Spring’s almost here and the market volatility is like a compressed spring, waiting to be released. No early heat to drive the ISO up, Palo shows some hints, and the Northwest remains an ice chest. We like the outside hubs, inside the ISO not as much, but more on that in the next post.