Our takeaway from the fundy crawl was bullish in the outside hubs, less so inside the ISO. California’s snowpack grows, the northwest’s is just frozen in place. Neither locales show any hints of melt in the next 14 days, meaning a deferral of bearishness. Be hard for BOM to breakout, but the MidC has a chance with a drop of ten degrees and not much precip. Rather than run out of energy, BPA will just draft GCL harder to meet load, rendering April that much tighter.

For our new clients, the first part of this post looks at the near-term bullets, defined as Nov and in. The last section looks at just Mid-C HL runoff months. Ansergy uses its “APT” model to evaluate all traded products against each other; the plots that follow compare the internal forecast to market settles, all expressed in heat rate. Log the site, if you prefer viewing this in terms of power price of spark. 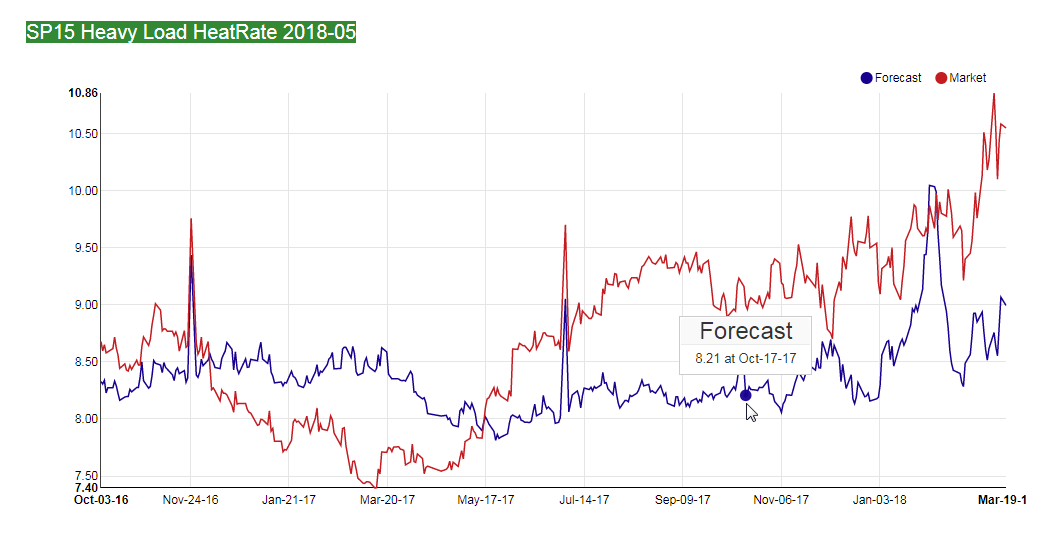 We fear shorting SP, whoever has was wrong for nearly a year, yet gravity is a tenacious force and at some point what goes up will come down. How much of SP’s premiums is Socal Citygate related? We suspect a lot and think the gas component of that premium will expire. We also know the total hydro aMW for 2018 has increased over the last few weeks. It’s all about timing, when will ISO cash get smoked? Not this or next week, we’ll pass. 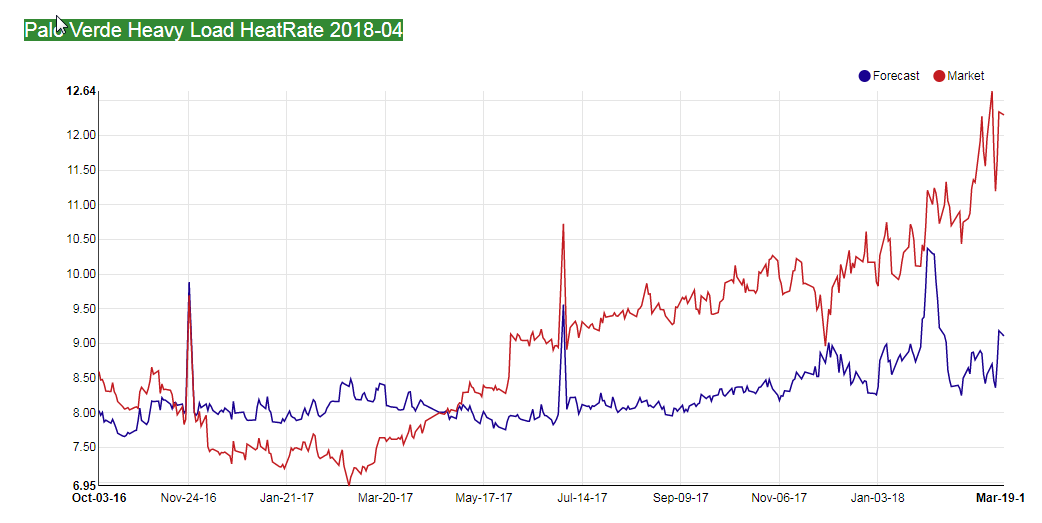 PV, too, has defied Newton and remains at contract highs. Like SP, without some indication cash will be pummeled, we’d pass on shorting. Plus, fundamentally, Palo looks more bullish in BOM than SP. Pass. 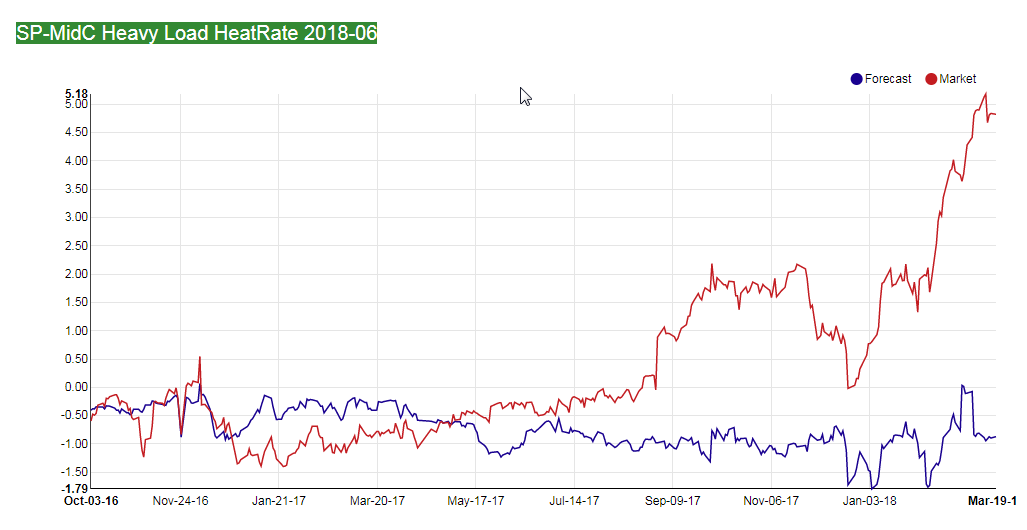 This is interesting; so far beyond contract highs, it is probably close to historical highs. Don’t necessarily disagree, if conditions from three weeks ago were the same today – they aren’t, and SP is more bearish today than it was then. MidC, arguably, is a bit more bullish, even though the melt is deferred to June. The bullish case says the Northwest remains tight and dry into April. May, the new prompt, gets bid up in sympathy and June drifts the same direction. Meanwhile, the ISO stays mild to cool, and the cash spreads tighten. Won’t the term come in at that time? Short at your peril, we’d sell a piece here, but our fingers would be taped to the buy button at the first sign of Northwest, or ISO, heat.

Same trade, except NP and May. Of the two, I’d short this before the June SP-MidC. Northern Cal snow has more than doubled in three weeks, and more is on the way. Northwest has just drifted sideways – both hubs are mired in a cold spell. MidC’s loads are more elastic to cold, on the upside, than NPs.  I’d sell this, too. 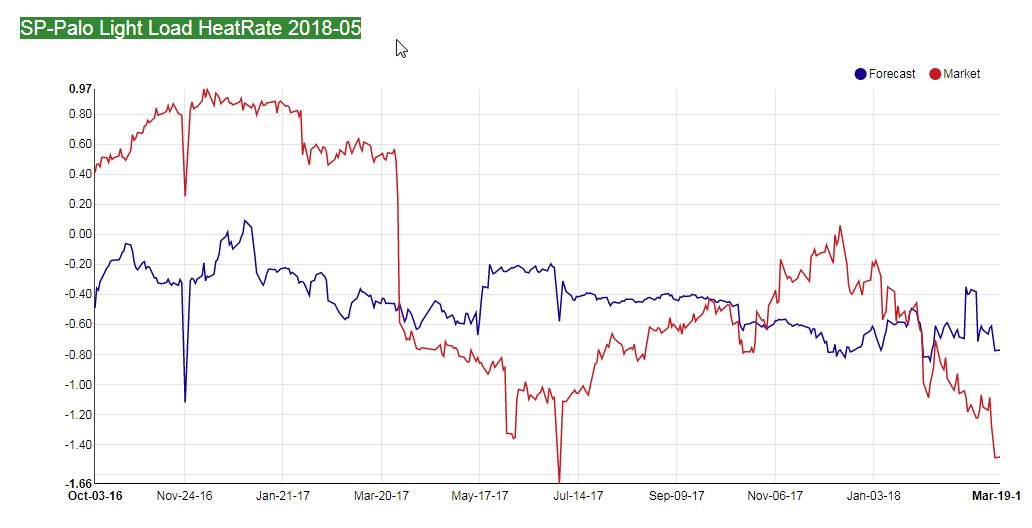 Hard to disagree with the market in the May SP-PV LL spread, but it’s approaching a contract low, which is always worthy of a closer look. We know a PV nuke is coming down for refuel, but we also know PV cash this week is growing tighter, while SP’s not. We also think the Citygate premiums embedded in SP are about to dissipate. OK, talked ourselves out of buying; we’ll wait for a lower entry price, maybe later in the week? 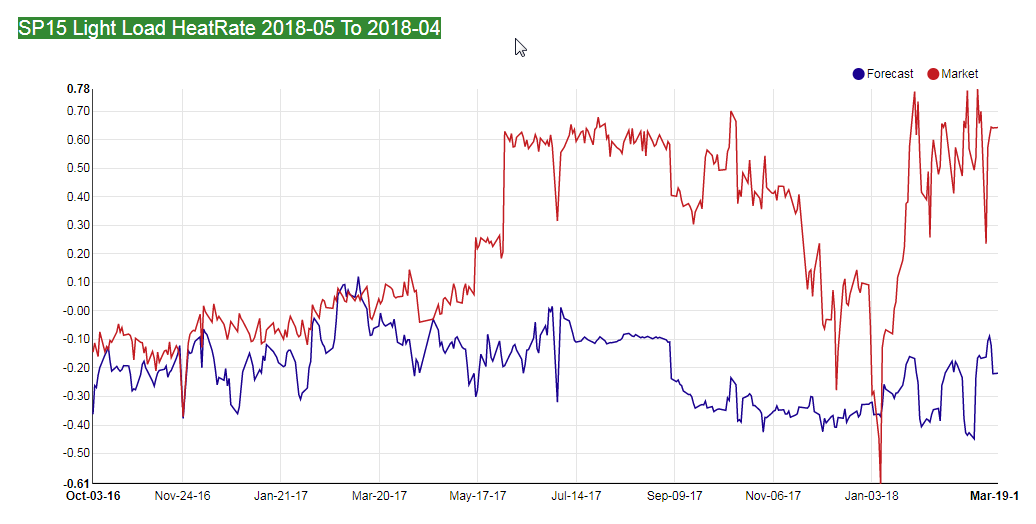 We wrote about this from the buy side back when it was a buy; it wasn’t a buy for long, now it is more of a sell than a buy. Near-term rolls are dangerous once the front leg goes delivery. This one got more risky with the building snow. Better places for VAR, pass. 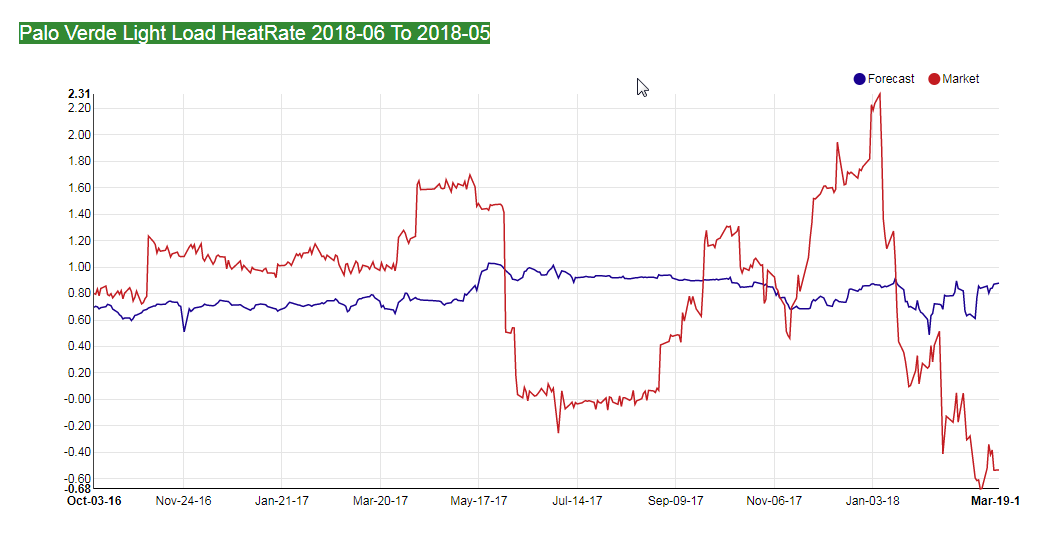 Another roll, at Palo LL, and this is cheap. The nuke won’t be out in June, that adds 1000 MW to net demand in May that won’t be there in June. Early heat will jack Palo cash; the nearer term bullet will rally harder. Plus, big HL loads means more idling night time energy. Lots of reasons to short it, but one compelling reason to buy is price – this is very cheap. All you need is a few crazy hot June Sundays to make this look like a bitcoin. We’d buy here. 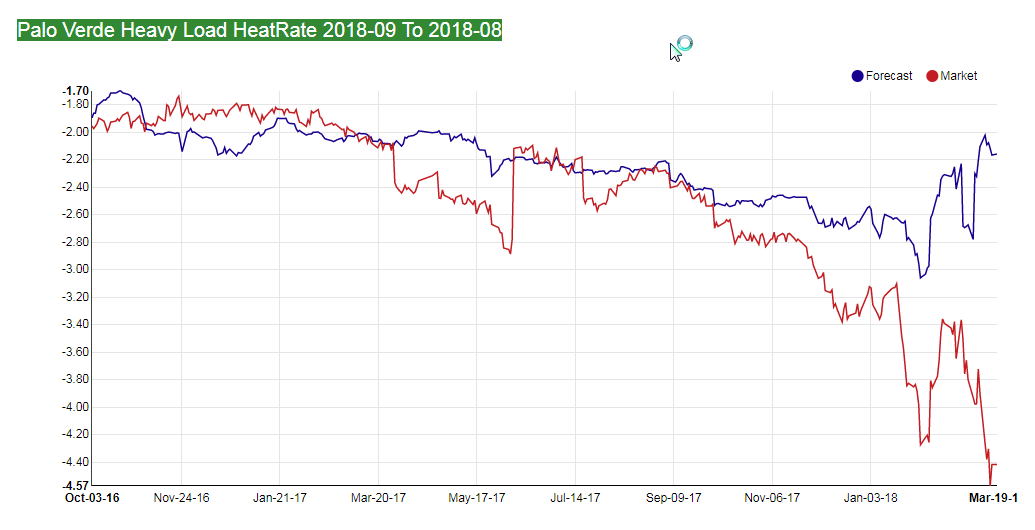 More Palo rolls, this one is HL Sep – Aug, and just set a contract low. Huh? What does the market know about Sep vs. Aug today, in March, it didn’t know a month ago? Last time this cratered it rallied hard, now it is even lower. We’ll take a piece. 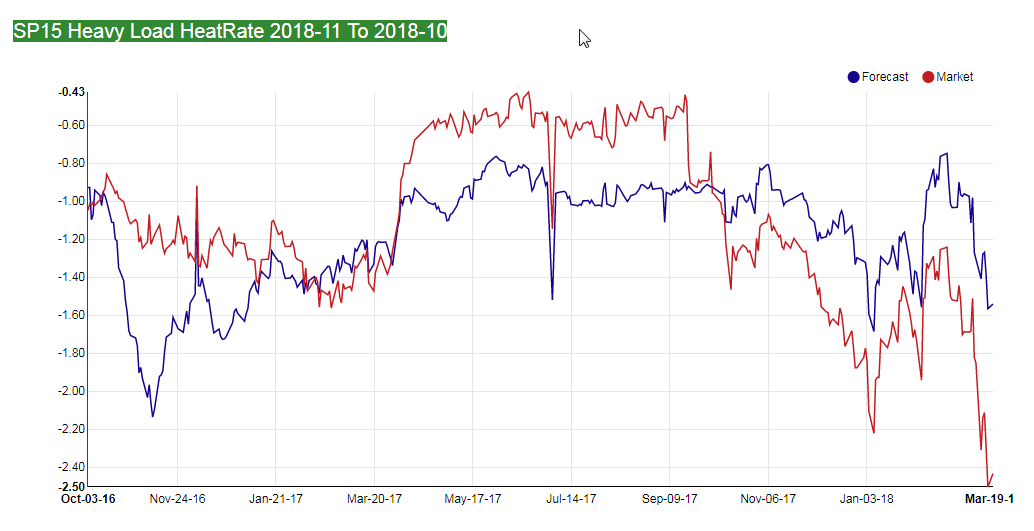 Now we’re rolling, SP HL Nov vs. Oct. Market hates Nov, loves Oct long time. You can have it; we’re buying this roll just because it is cheap. 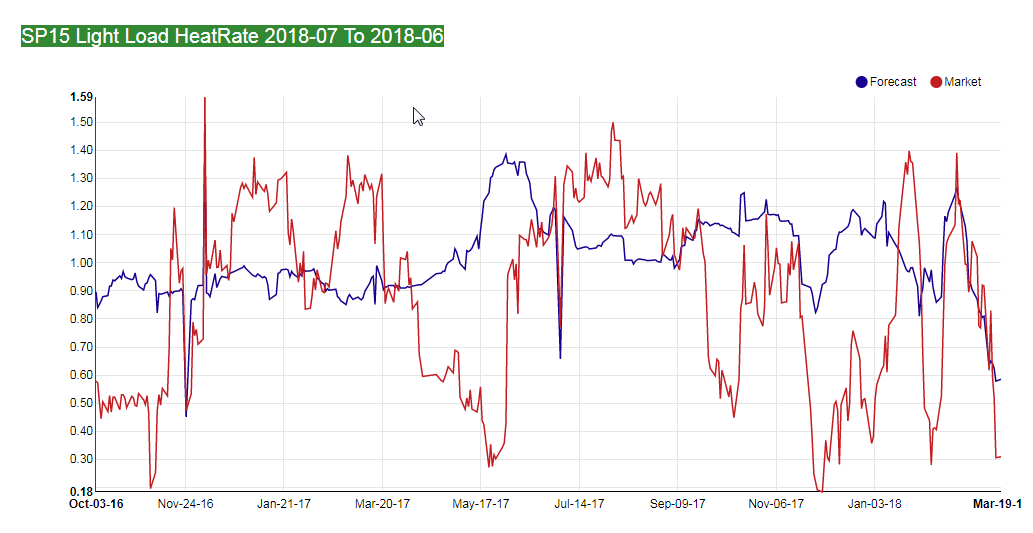 Talk about bitcoin, this July vs. June LL roll at SP is all over the map; now it’s on the south end of the map; seems every two weeks it gyrates 1k btu – we’ll buy it. Odds are the ISO runoff will be in the history books by the end of May, rendering June relatively immune. I guess if it stays cold in the ISO, this will lose, but it isn’t likely that Cal won’t seem some 90s between now and May. 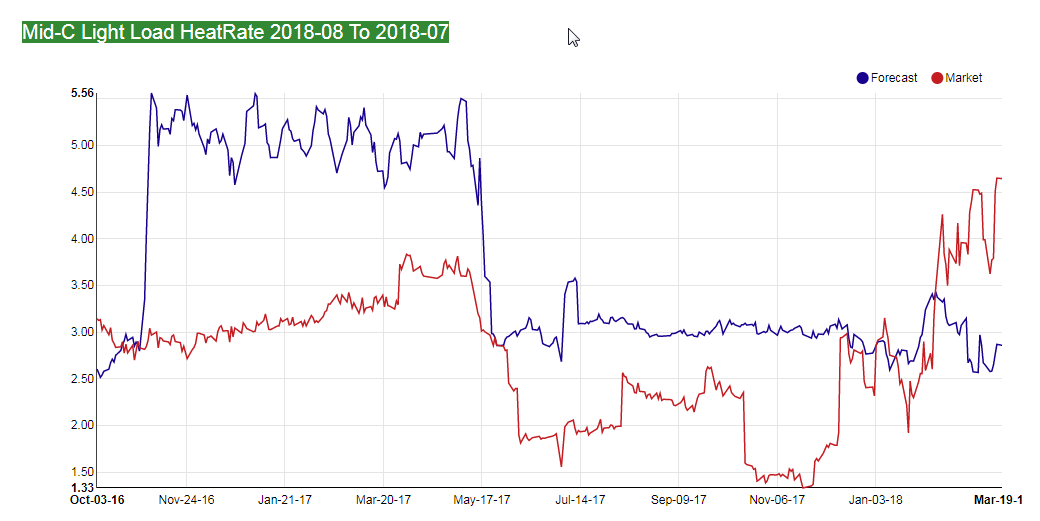 Don’t disagree, the Aug vs. Jul MidC LL is worth more today than a month ago because of cold weather, deferred runoff, and builds. But don’t think this deferred runoff leaves Aug unscathed, continued cold with the big builds above Coulee will keep melting into August – if there isn’t massive heat in June/July. The trend is pushing this up, so maybe wait, or just jump in.

Hey, the water year in the ISO is getting more bearish, not bullish, but the NP-SP is widening for Sep. Don’t agree, would sell this.

For those that don’t know, the above table is the Mid-C APT for the front. To view it, click here. 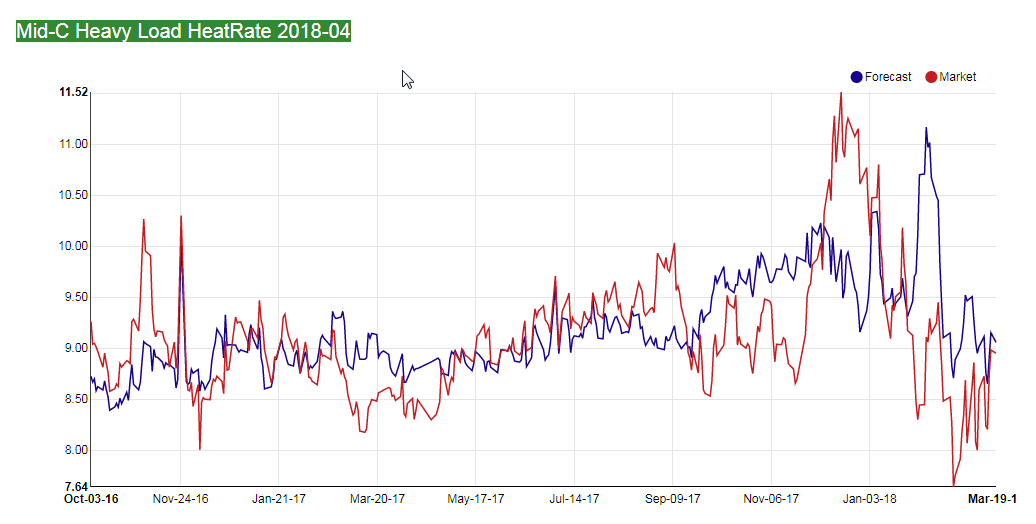 April is creeping up, as it should be. As long as it stays cold and dry, and BPA is forced to draft Coulee in March, keep buying April. 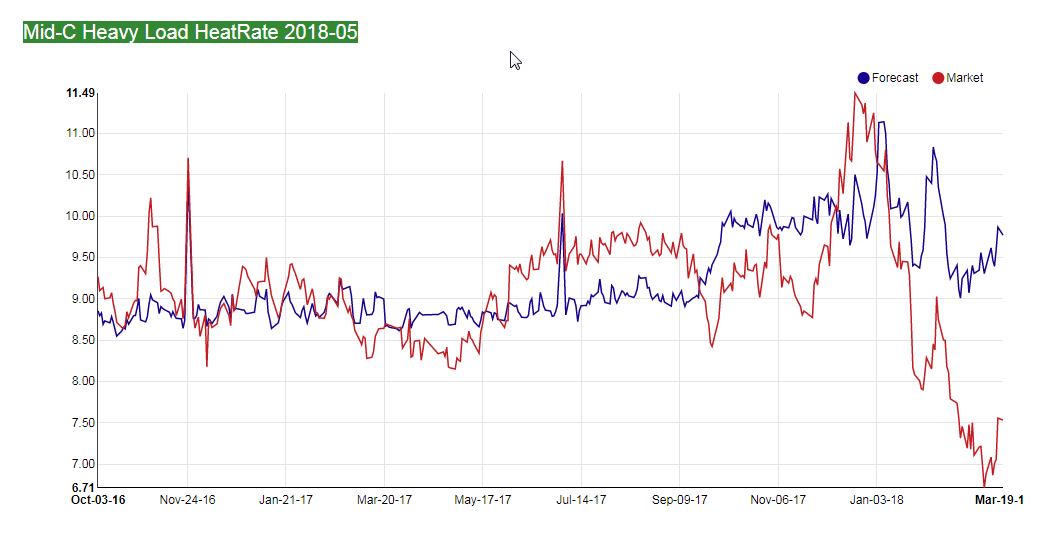 Even May showed signs of life, not much, but the bleeding stopped. As with April, so goes May – if its cold and dry, and BPA keeps pre-maturely drafting Coulee, keep buying. 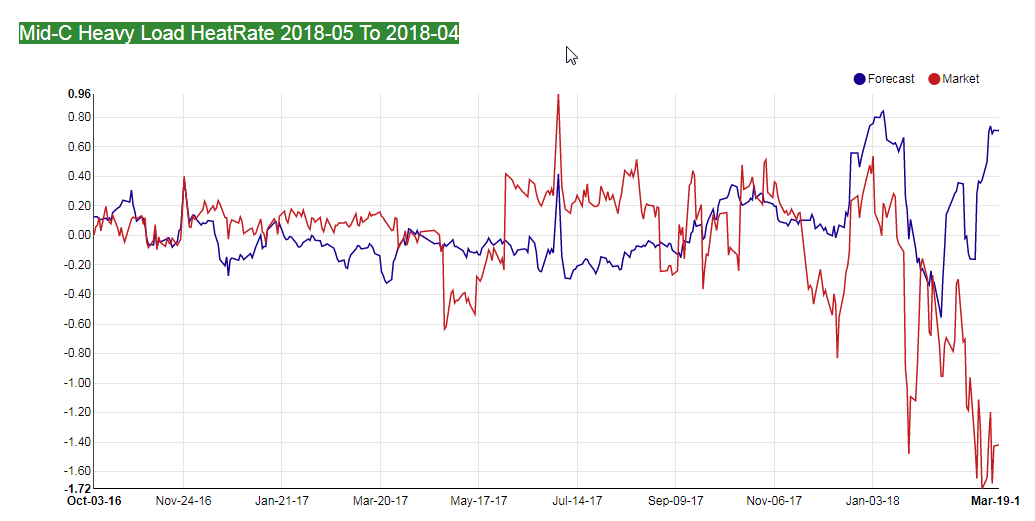 Which is better? More liquidity in April, it’s closer to cash, but the roll is still cheapish – forget it, we’d be long both. 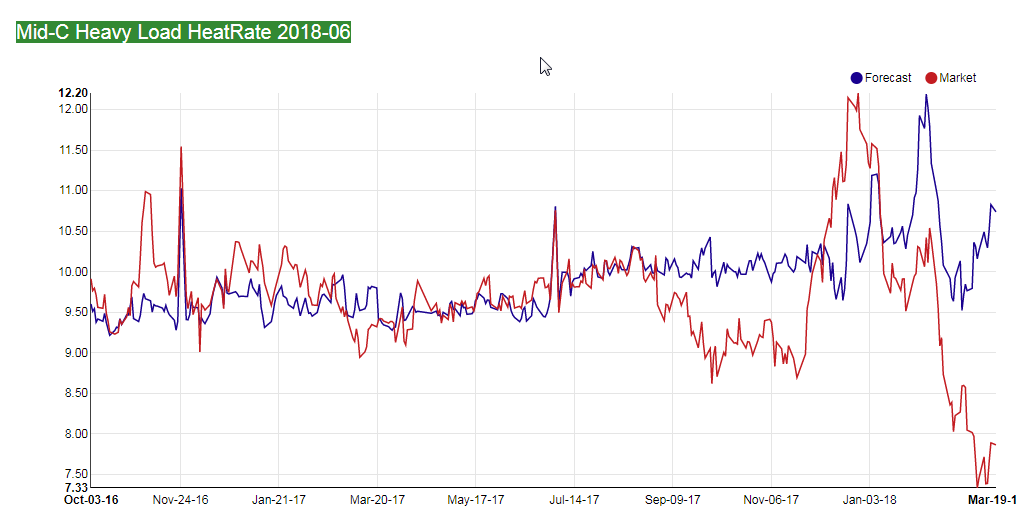 Oh, June, poor June, all of this cold weather is jamming more water into it, and the market has beat it into submission. Still, if the front is bullish won’t the back rally in sympathy? Perhaps, but June will have a big runoff, that is indisputable. We think the STP will increase, perhaps not for a few weeks, but it will as the front keeps pushing more water into the back. We’d pass and just play the Prompt and May. 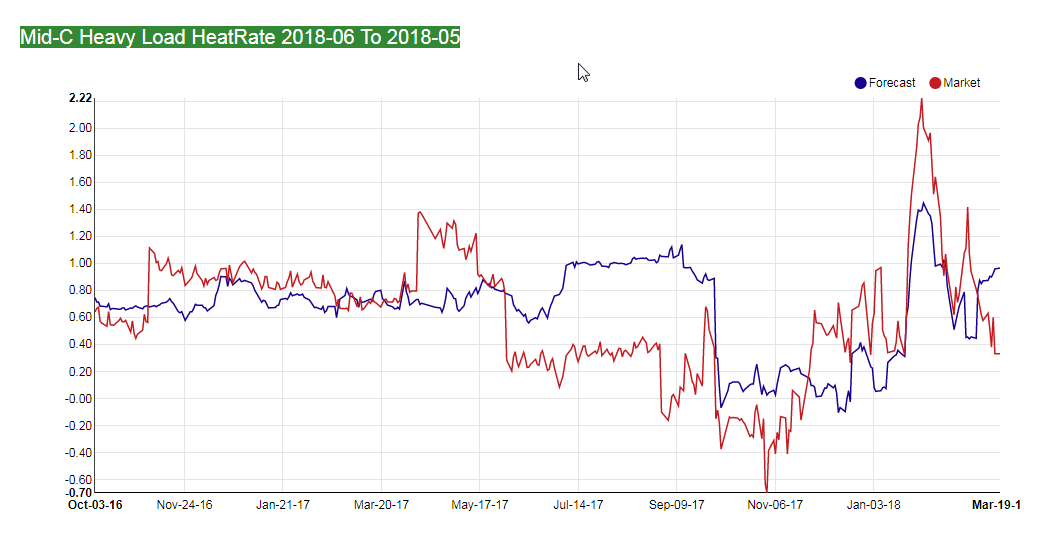 We shorted this when it was priced so stupidly; now its priced reasonable, and would pass. 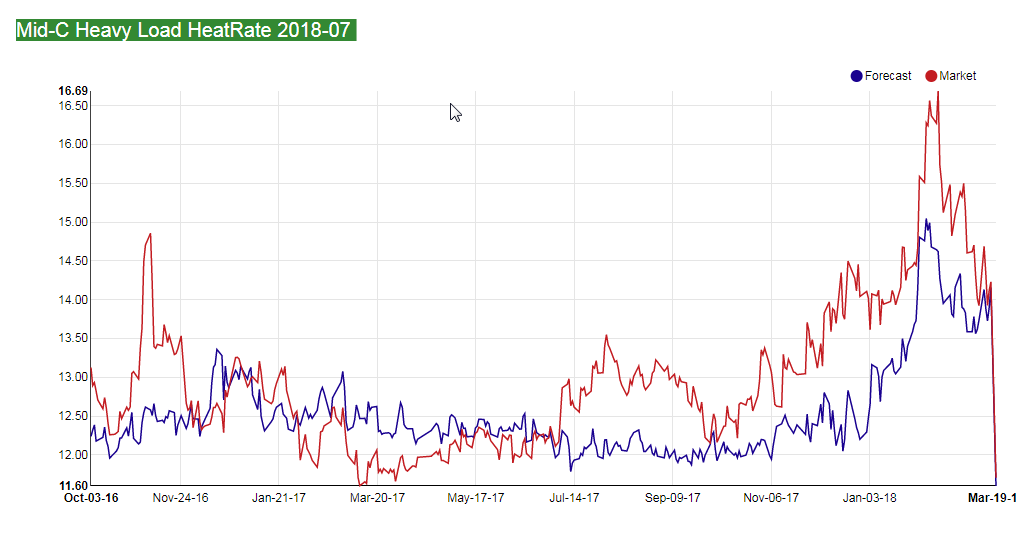 Don’t think that is a good mark, must be gas since the forecast tanked with the market. This was free money in Feb, but (if you ignore that last mark) is still priced rich.