Interesting times; gas remains a big methane cloud hanging over LA, but is it? The Northwest has a massive snowpack, but does it? It’s cold, really?

Everyone is worried about Socal – not enough gas in the ground, not enough pressure in storage, massive cold and huge demand – blah blah blah. Let’s look at numbers, those rarely lie.

Demand in Nocal is up 600 MMCF, week-on-week. Demand is up at Socal, over 800 MCF in that resource-constrained megapolis and SCG had to pull 200 MMCF out of storage. But wait, there is nine bcf more today than last year? That 800 MMCF rally in demand is impressive, but much of that was offset by imports. In fact, almost all of the swing in load was offset by harder pulls on the interties (800 vs. 700). So what’s the problem? 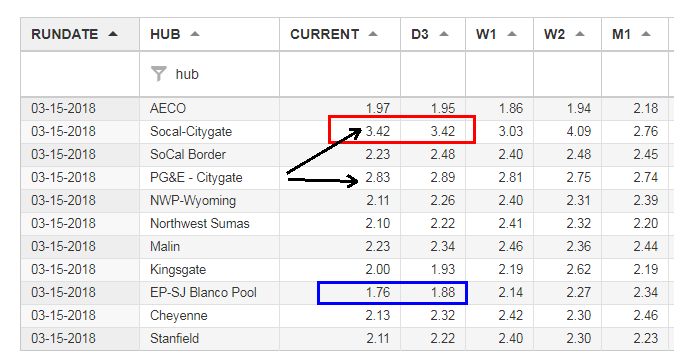 By the looks of spot gas, the problem is the rest of the WECC is too cheap; San Juan is trading a one handle – uggh. Sure, SCG is $0.60 premium to PGC, but this isn’t indicative of big problems. Plus, it doesn’t get that cold in LA: 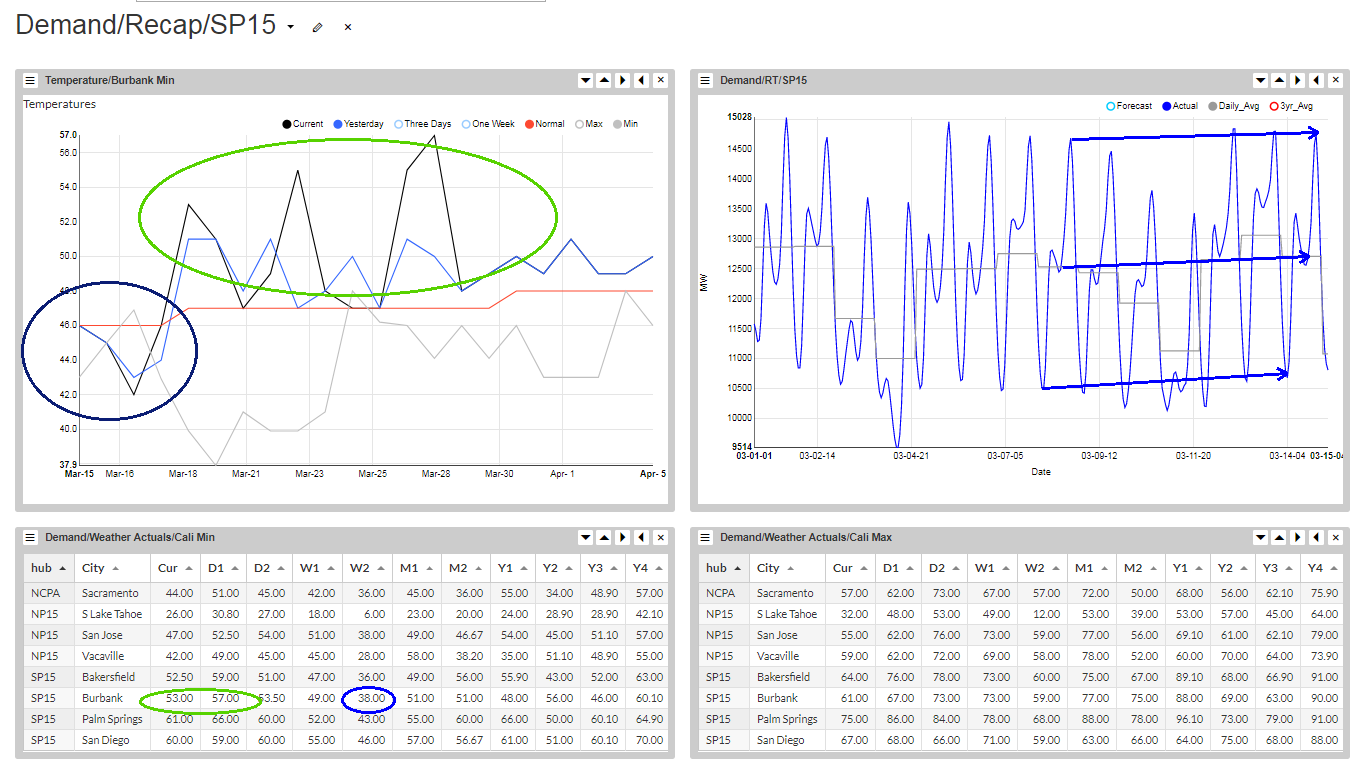 There are a few chilly days over the weekend, maybe even ten-year lows will be set, but contrast those temperatures with last month when Burbank dropped into the 30s – that is cold for LA, 40s isn’t. It’s massively anomalous when compared to normals, when compared to winter lows it’s a big yawner. 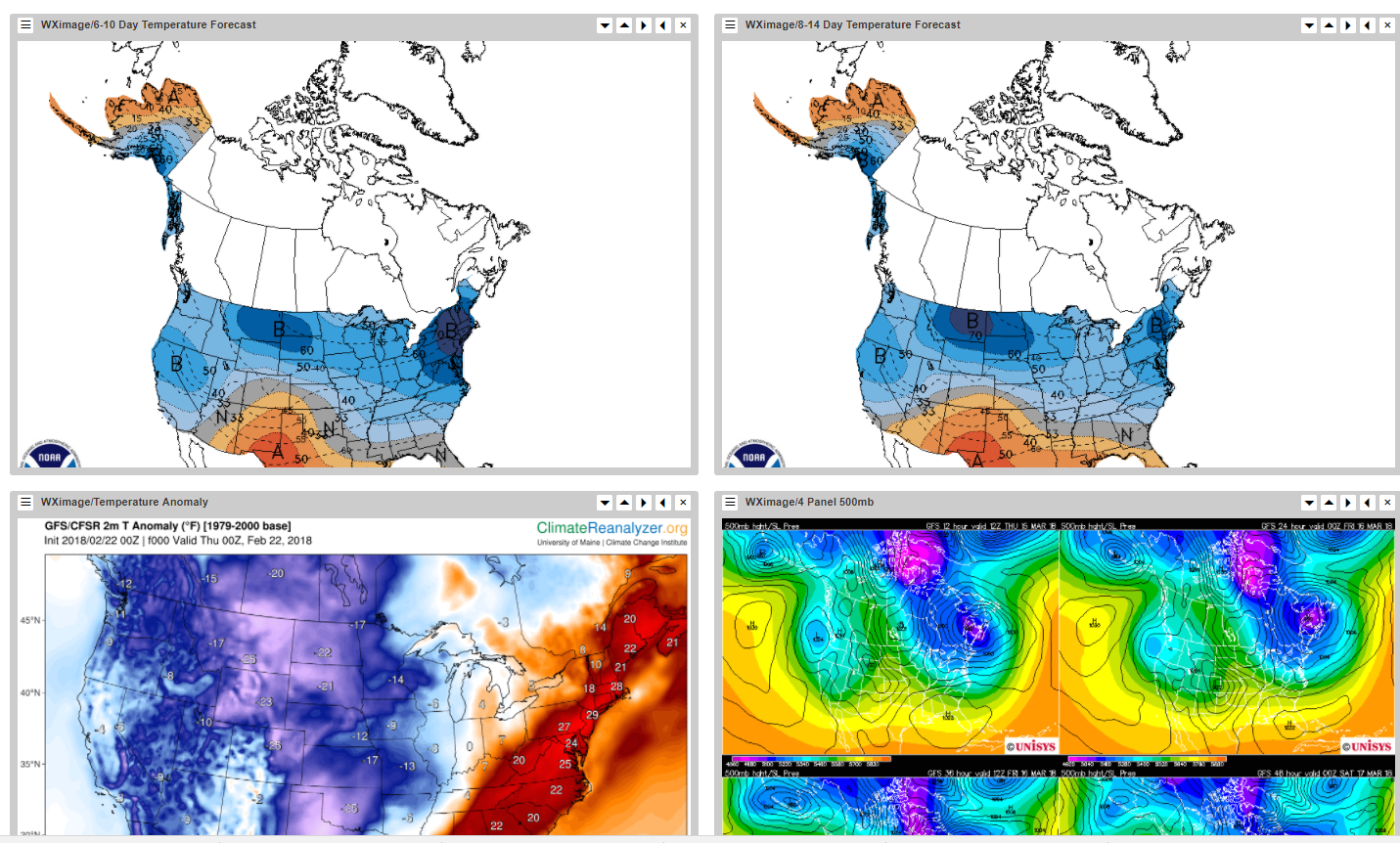 We find the cold anomalies in the Northwest more relevant as natural river flows are incredibly tight . More on that in the hydro section. 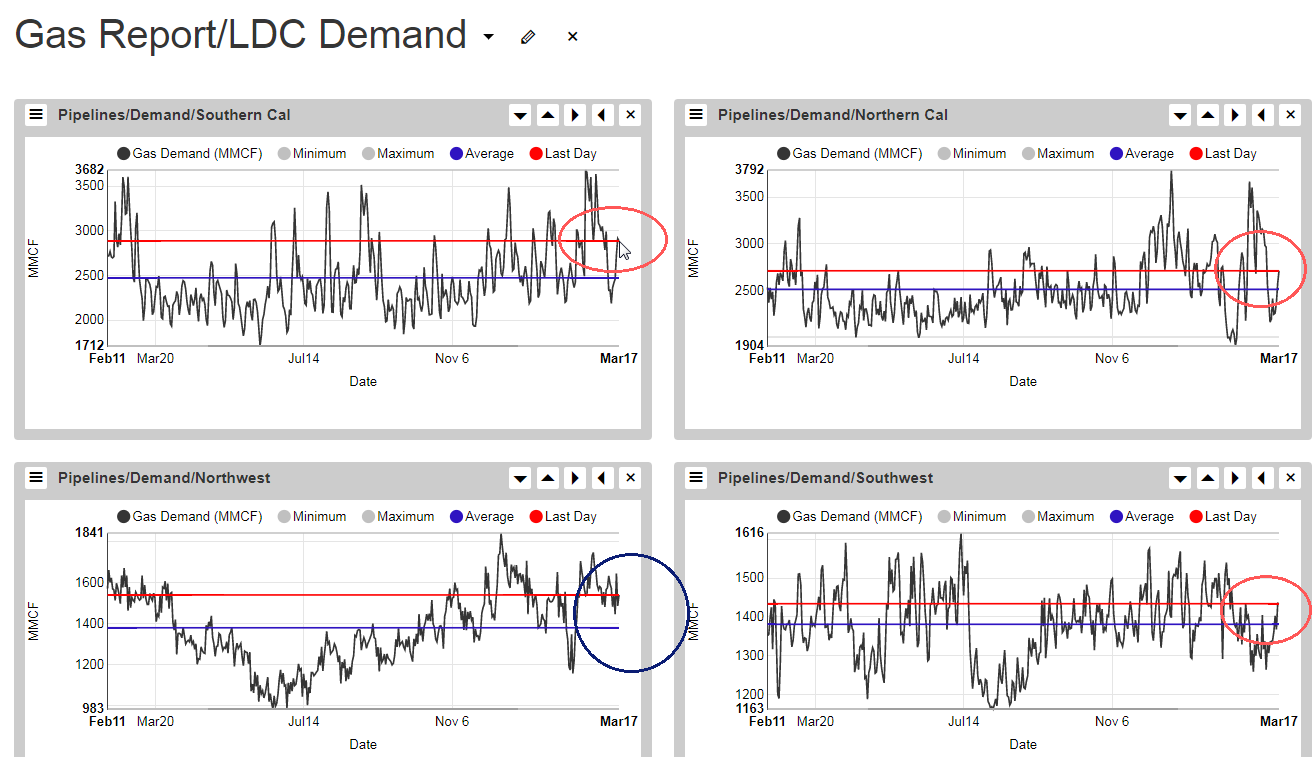 Despite rallies, every region is off sharply from winter highs – winter ain’t coming, its going; just go and die, John Snow, and stay dead. 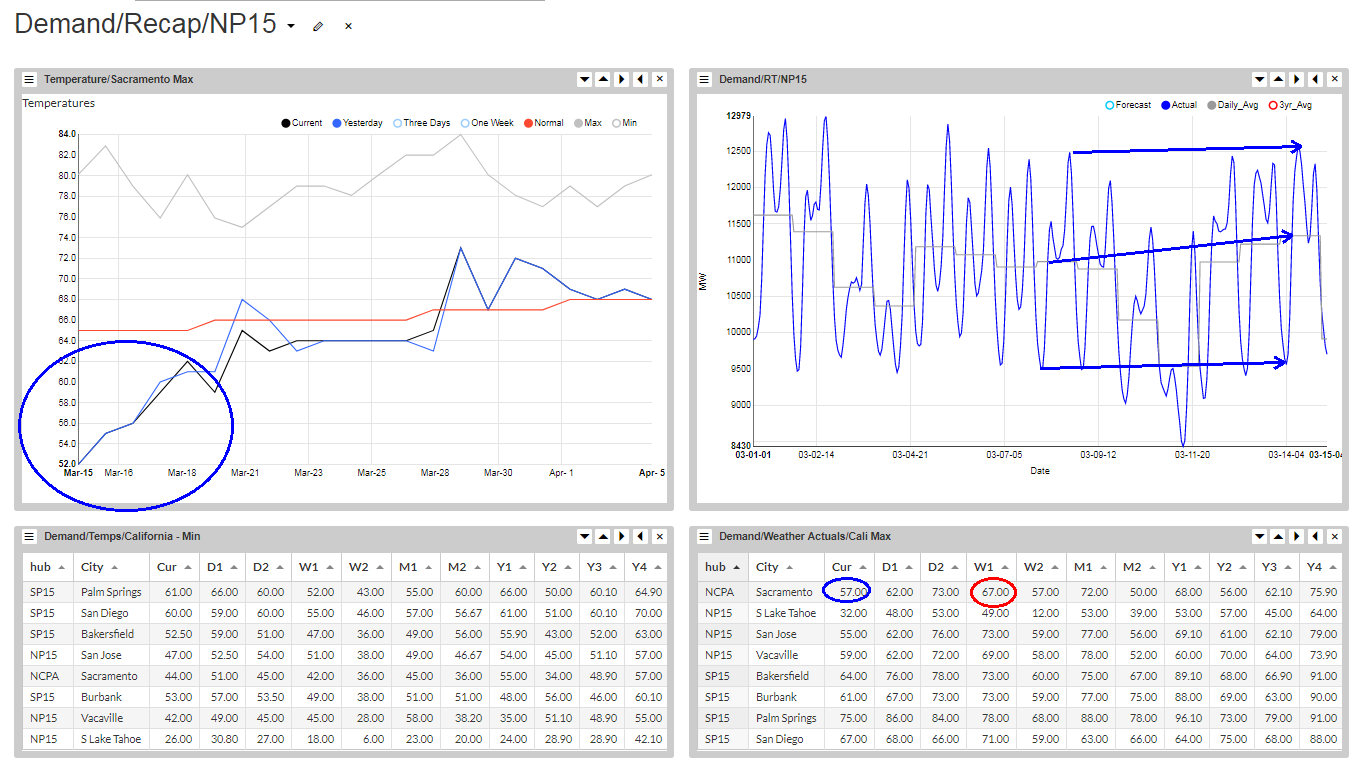 NP has some sharp cold anomalies (to max), and its loads are slightly higher, week-on-week. Looking ahead, not much to get me excited about NP’s cash outlook for the remainder of BOM; weather is just about average, meaning the lovely 70s in the Bay. 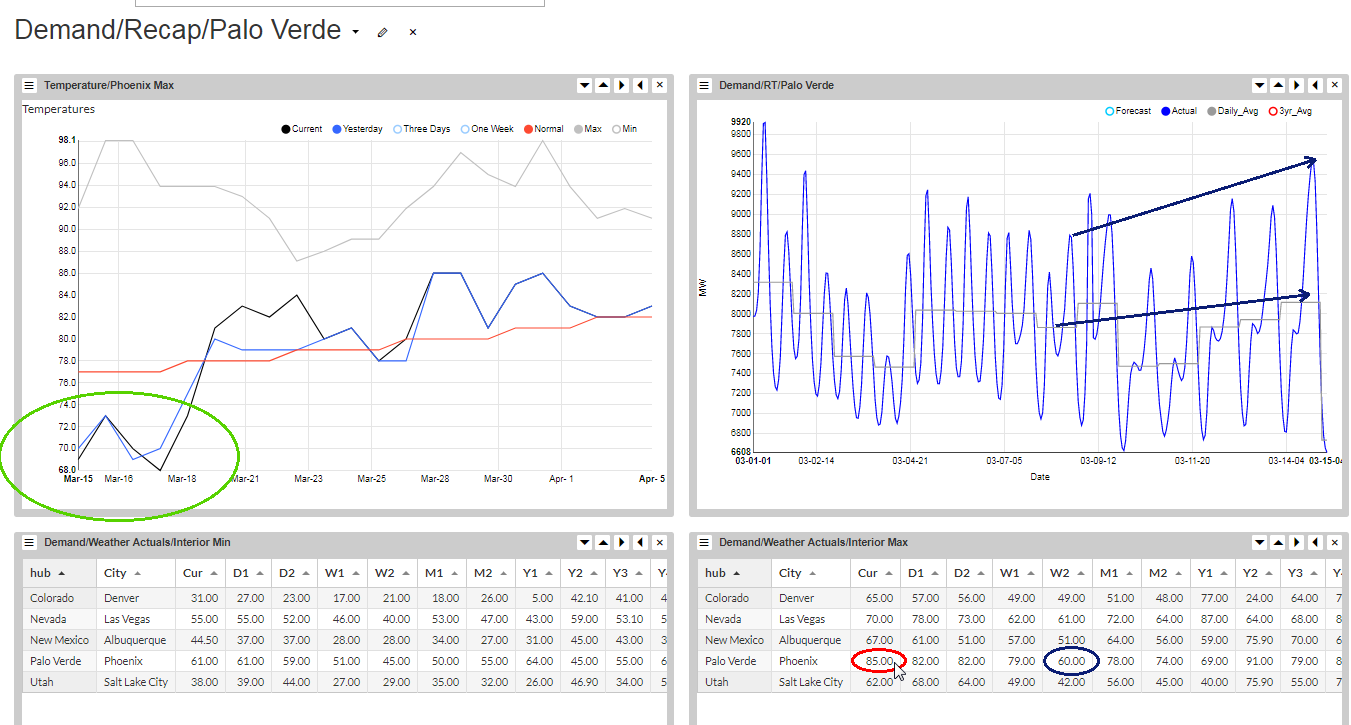 Palo is interesting. Loads rallied sharply once Phoenix posted some daytime highs in the 80s. They even had to fire up Griffith: 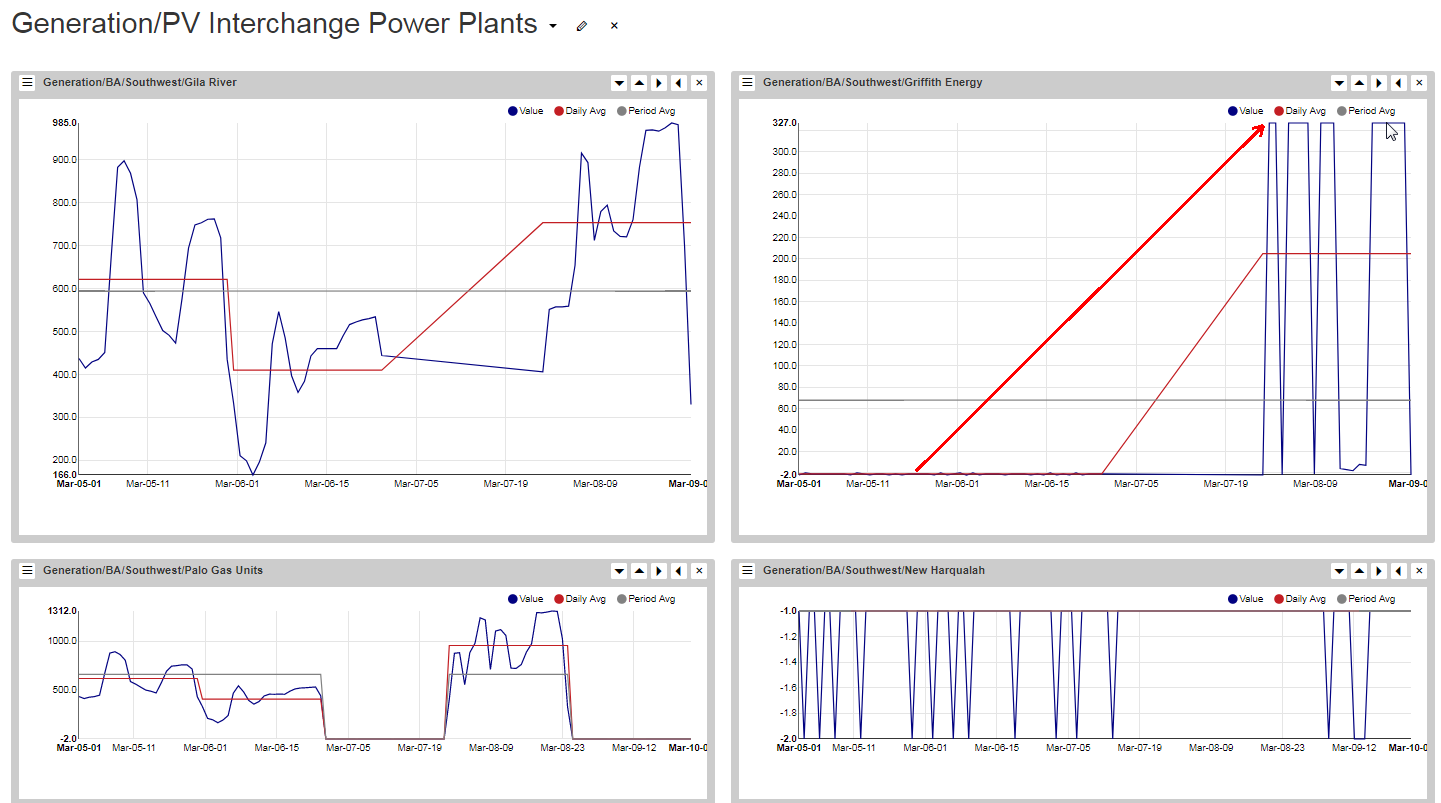 That plant hasn’t run since October, though New Harqualah is still on the economic sidelines. Also, take note of that upward sloping normal temperature, and more days than not, Phoenix exceeds that. Summer is coming, and we wouldn’t be surprised to see Sun City post triple digits in the next few weeks. 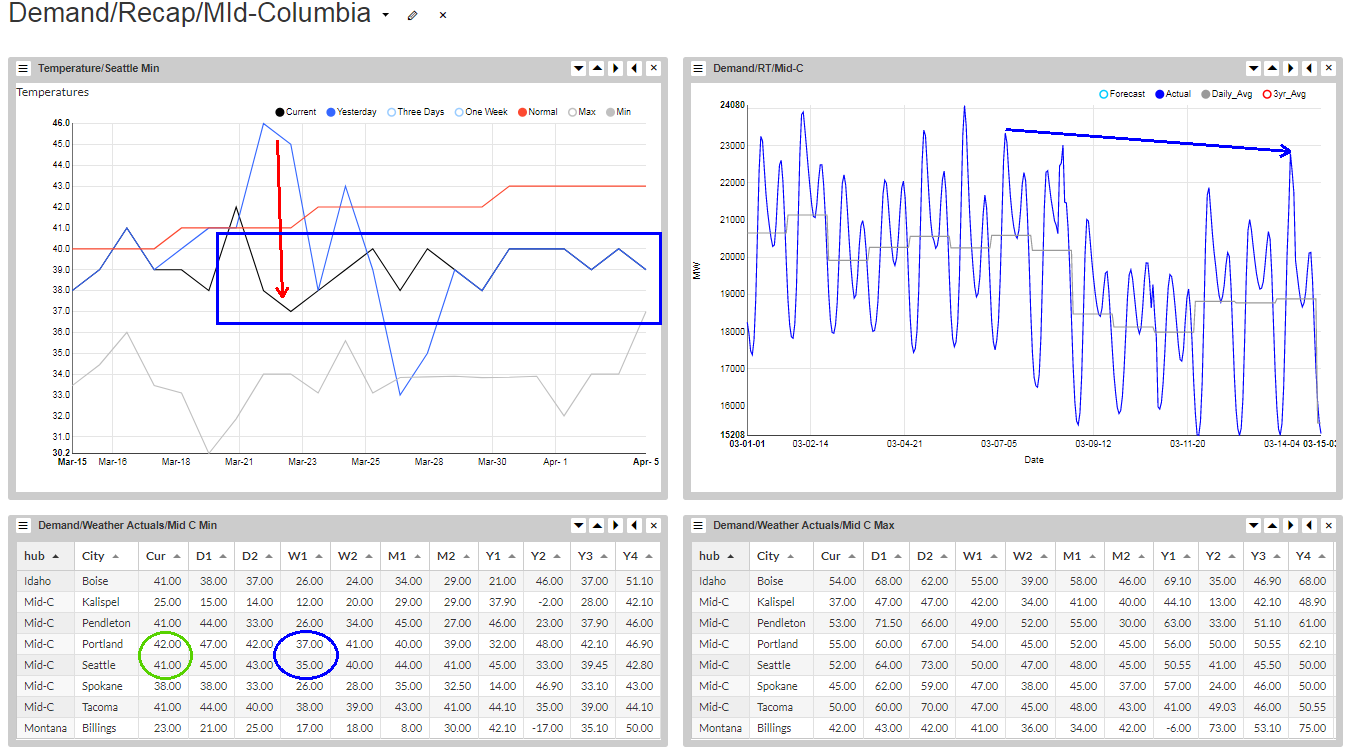 Loads are off in the Northwest as evening minimums have rallied about five degrees. Looking ahead, things get more interesting, but not from a demand perspective, from water. From now until the end of BOM the current forecast has temperatures several degrees below normal. That will put a “freeze” on the season’s first freshet and will take us into spill season with little water in the rivers to spill.  Hhhmmm, April anyone? 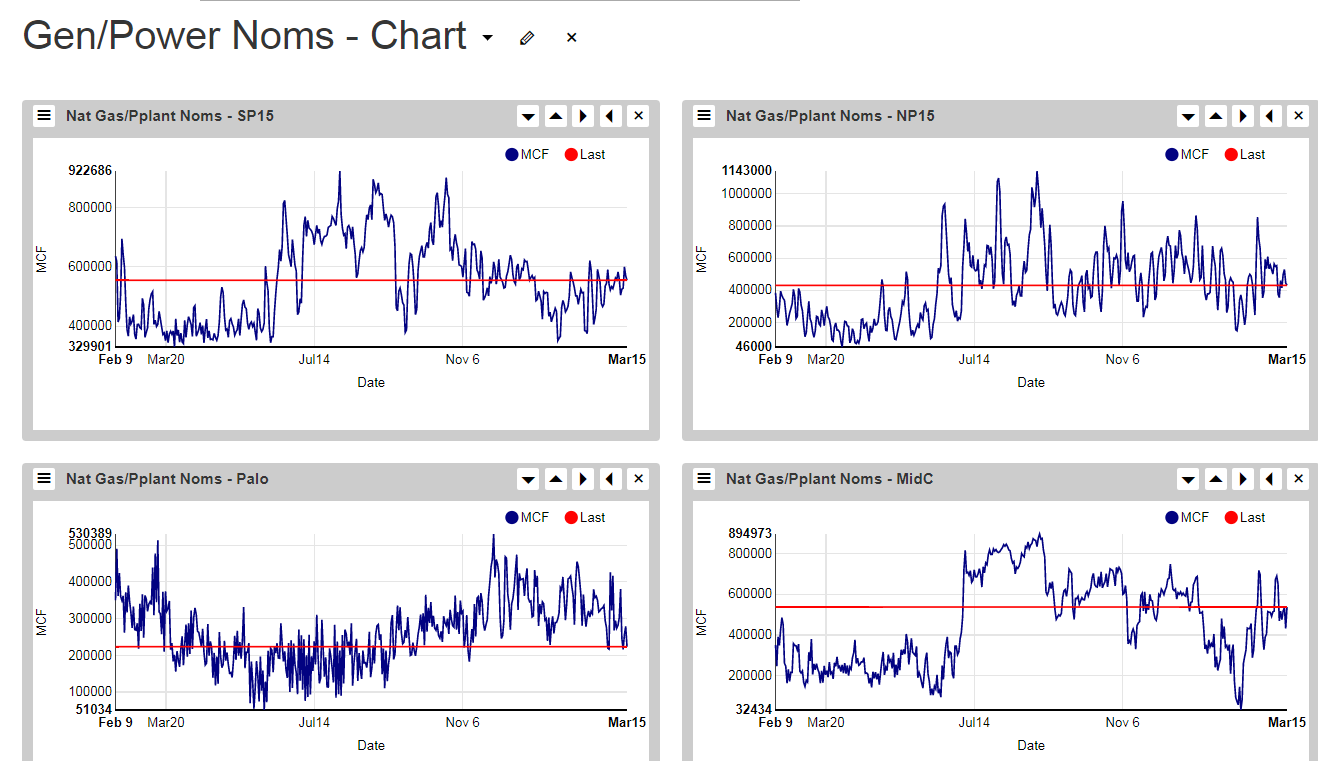 Noms are a bore – mostly sideways as the WECC is neither hot nor cold; this is the shoulder season, we are not very deep into heating, and only PV has any AC load. 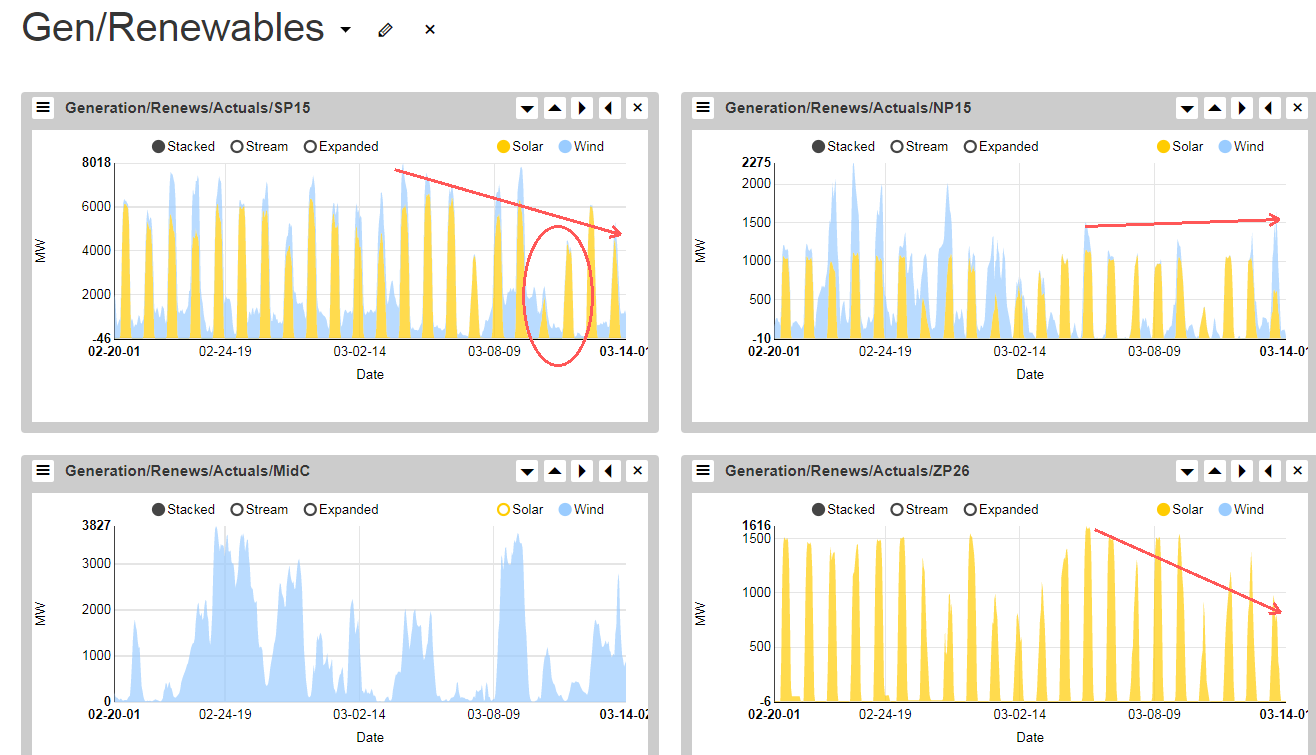 ISO renewables are bullish in SP and zp, both have seen their solar output dimmed dramatically. BPA’s wind blows in gusts then dies away; this is the one time of the year that the feds would love to see 24/7 wind, but not getting it. 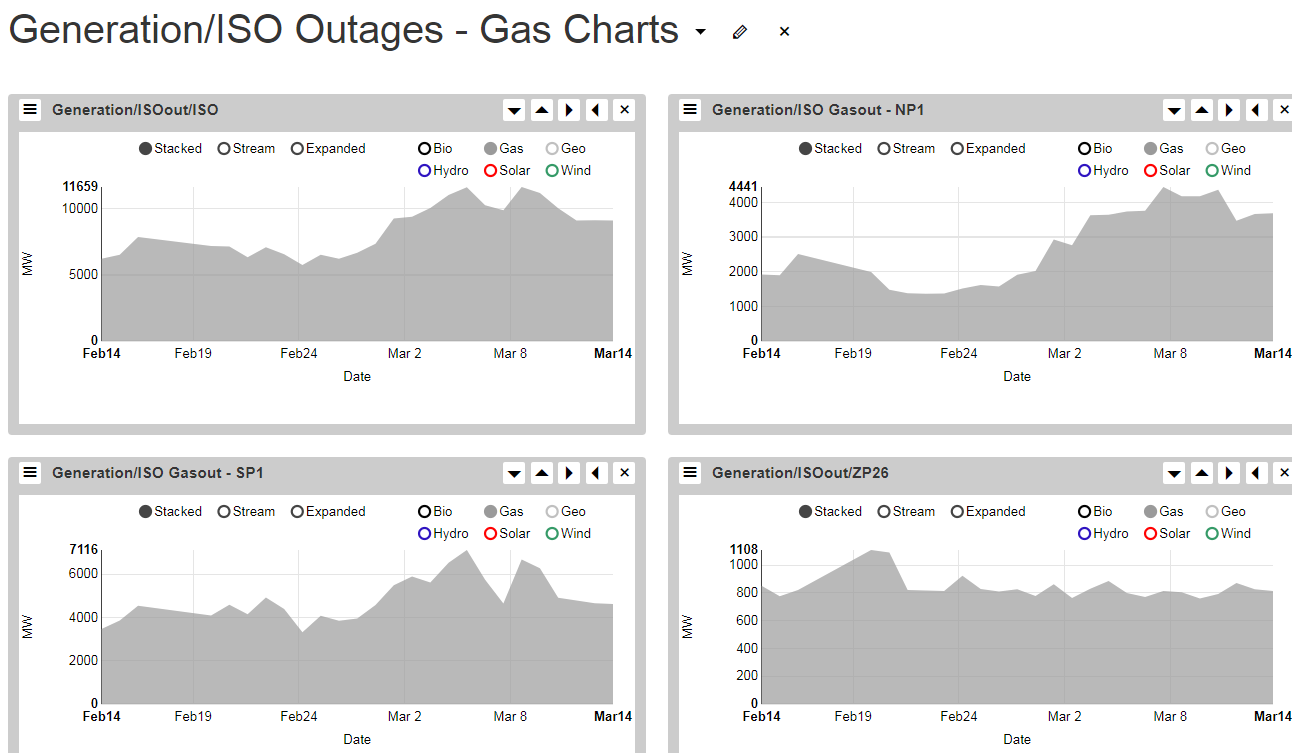 This is just about the peak of the ISO spring outages; within three weeks we’ll see most of the planned start coming back. Diablo will be returning, too, maybe start ramping up late next week as that will be the fifth week; if not then, the nuke will be back by April Fools Day.

Let’s get California out of the way. That state is in a mini-wet streak, and it looks like its still streaking.

Another couple of wet days, which explains a lot of that solar curtailment. The state’s rivers are responding: 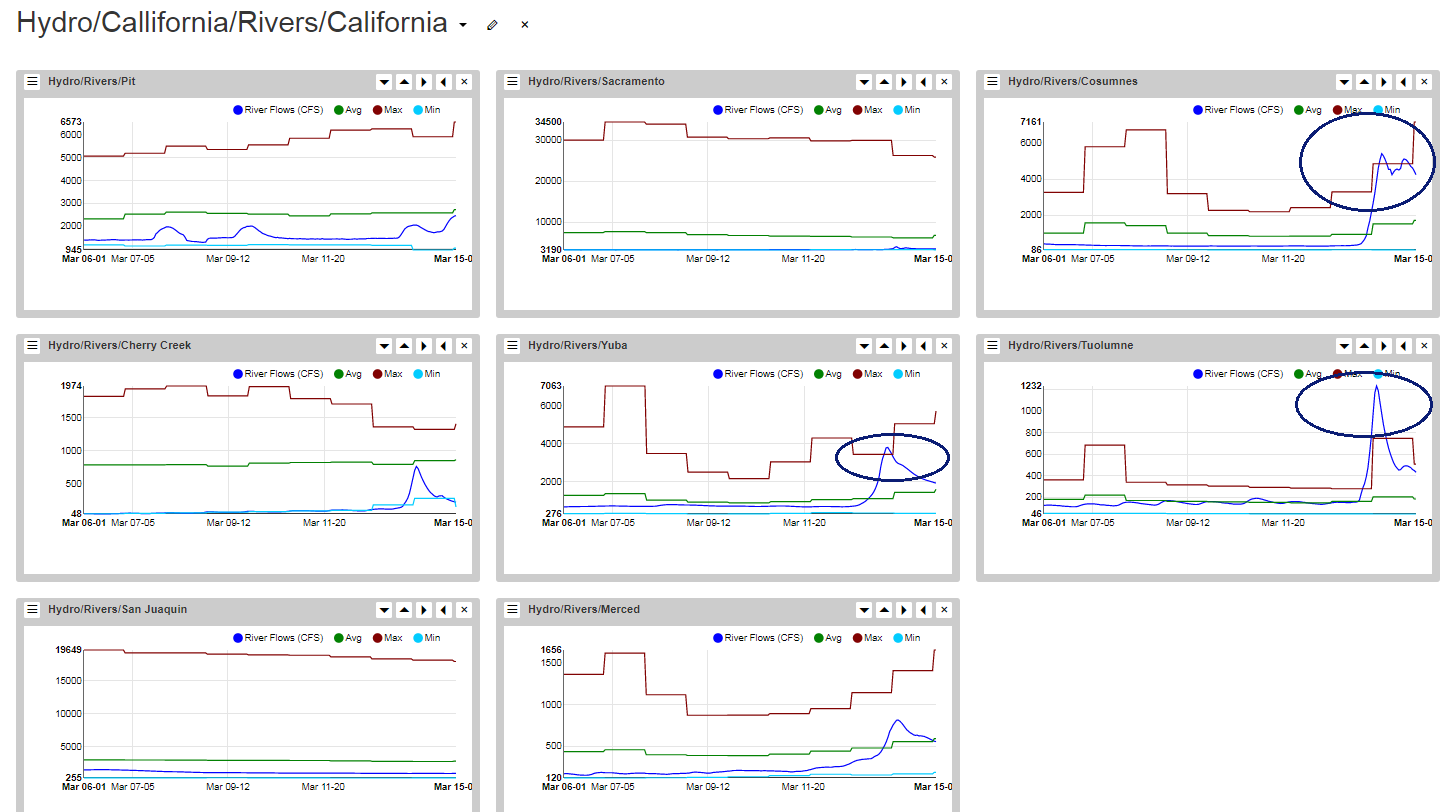 We’d expect more rallies off of that two inches the valleys are expected to receive over the weekend. The Sierra’s will get more snow too, that mountain range has rallied hard:

Three weeks ago, the water year was looking like 2014-15, now it is like 2012-13, having nearly doubled its anomaly. With at least one more storm, the state has dodged a few water bullets. This also means there will be a runoff, it will last several weeks and should jam another 2000 aMW of hydro energy into the mix. When becomes the operative question. That first Sacramento 85-90 will trigger the freshet, and whatever load rally will be offset by the hydro, at least for 3-4 weeks.

Seattle – 0.17 inches over a ten-day stretch – in Mid-March? Well, I live here, so to borrow Donny Junior’s words “I love it.” If you’re short, you love it less than Donny and I. The damage has been done; this is a huge water year.

I flagged the years that are similar, but it looks to me like you’d need to go back to 2008 to find the best model year. That was an exciting year, I was living in Portland, OR and recall low 40s every day in May, all the while cash was trading in the 50s. That strong cash market propped up the Junes, they were trading in the 40s, and the market pundits were saying you’d never see single digits again. The world had changed, it was mathematically impossible to get that low. Guess what – Kalispell hit the high 80s around Memorial Day and a week later MidC was trading $2.00. 2008 was a great example of a deferred runoff, the snow levels never changed, in fact, that built throughout May. But what goes up, must come down, and all that cold April-May only made June and July more bearish. Not saying we’ll see that this year, but the snow levels are about the same today, and we are amidst a cool weather pattern.

Let’s check out this week’s STP; there may be some nuggets to pan out.

We’ll do it in two-month chunks, beginning with Mar-Apr, both of which are currently forecasted to realize 10,000 aMW lower “energy equivalents” than 2017. We’ve been harping on that for the last two months, but given current temperatures, these forecasts seem reasonable. If anything, April may be slightly overstated. Both of these bullets look like a normal, to even a dry year – all because of degree days, not SWE.

May and June are projected to be big, but not records, which is a safe bet given we don’t know timing yet. Both could rally, as evidenced by past water years, and May could fall, should weather stay cold. Take 2008; we already babbled on about that year; it realized 2000 aMW less energy than the 2018 forecast, and had the same snow. Point being, it’s no longer about SWE, just CDD.

July is the most interesting of all; we think because it is perhaps the wrongest of all the forecasts. Back to 2008, a deferred freshet year. That year realized 5000 aMW more energy than the RFC’s current forecast, and 6000 aMW less when compared to 2011, another similar water year. Therein lies the opportunity, from the short side, if temperatures stay cool.  By the way, look at the second chart, plots of energy by day, and look at how sharply the RFC is backing off 2018. 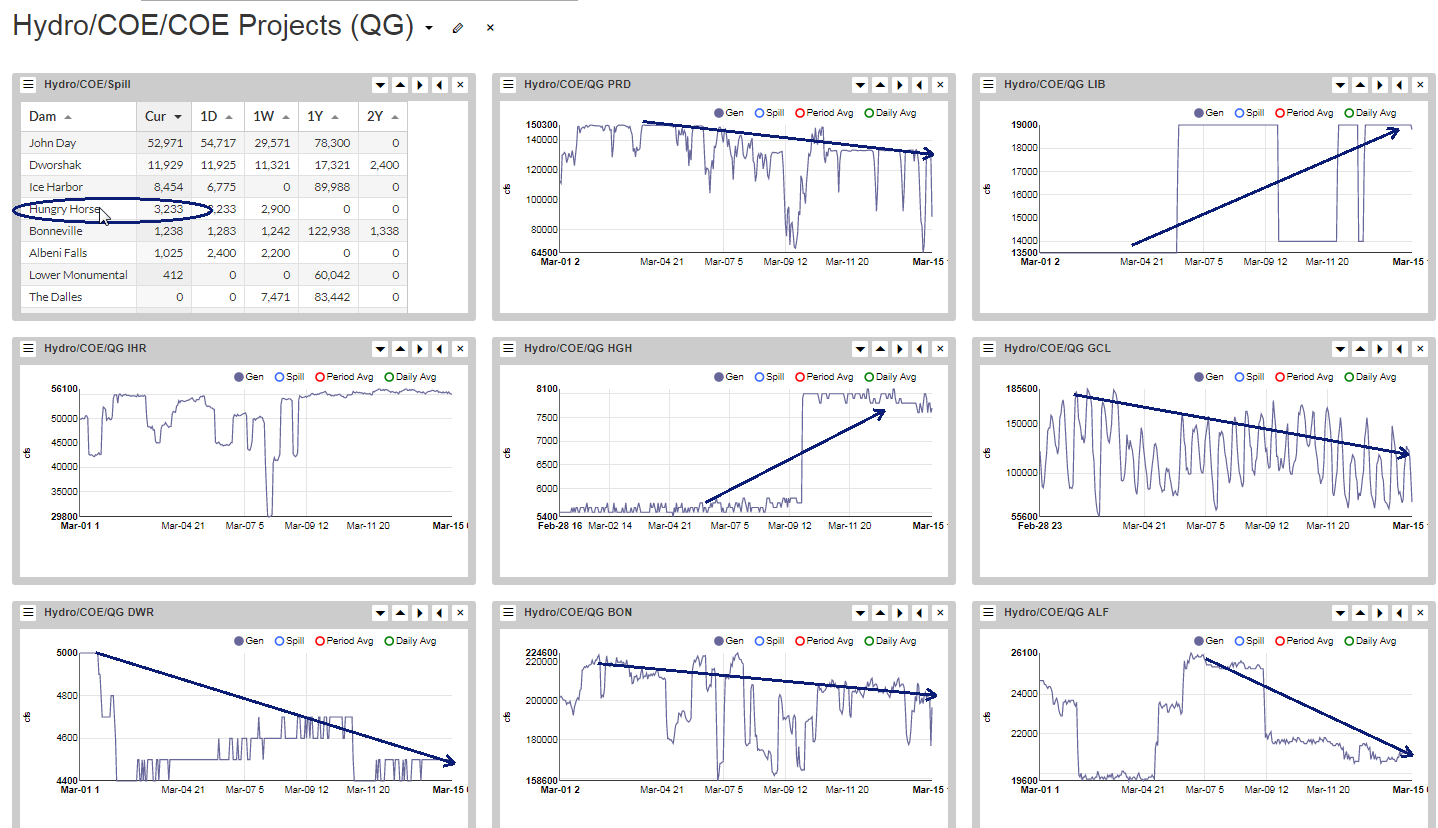 Most regulated projects are off in the Northwest; Coulee leads that group:

The spill gates draft is over, now the project is back to flood control drafts, and it doesn’t appear BPA is in any hurry to start those. Cutting the draft drove a 30kcfs drop in discharge. Of course, any draft deferral become April bearish, so keep an eye on that. Recall, the project needs to pull to 1228 by April 30, but that is a scant 25′ in 45 days — yawn.

This is a collection of non-fed projects, note five of them are well below their 20-year averages. Dry/cold. 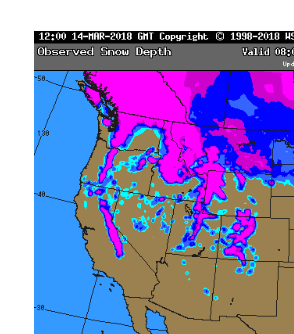 If you’re hoping for some low-level snowmelt to crush this, you might want to find something else to hope for. There isn’t any low-level snow – that is as of yesterday, here is a month ago: 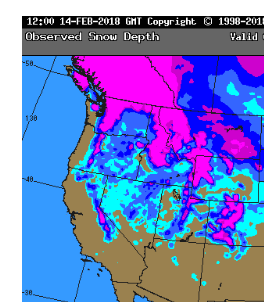 All the low-level snow is gone, now its just the higher elevation that is left, which requires substantially warmer weather to melt.

An AC outage has been taken off the table, aside from that, no changes on either the AC or DC. 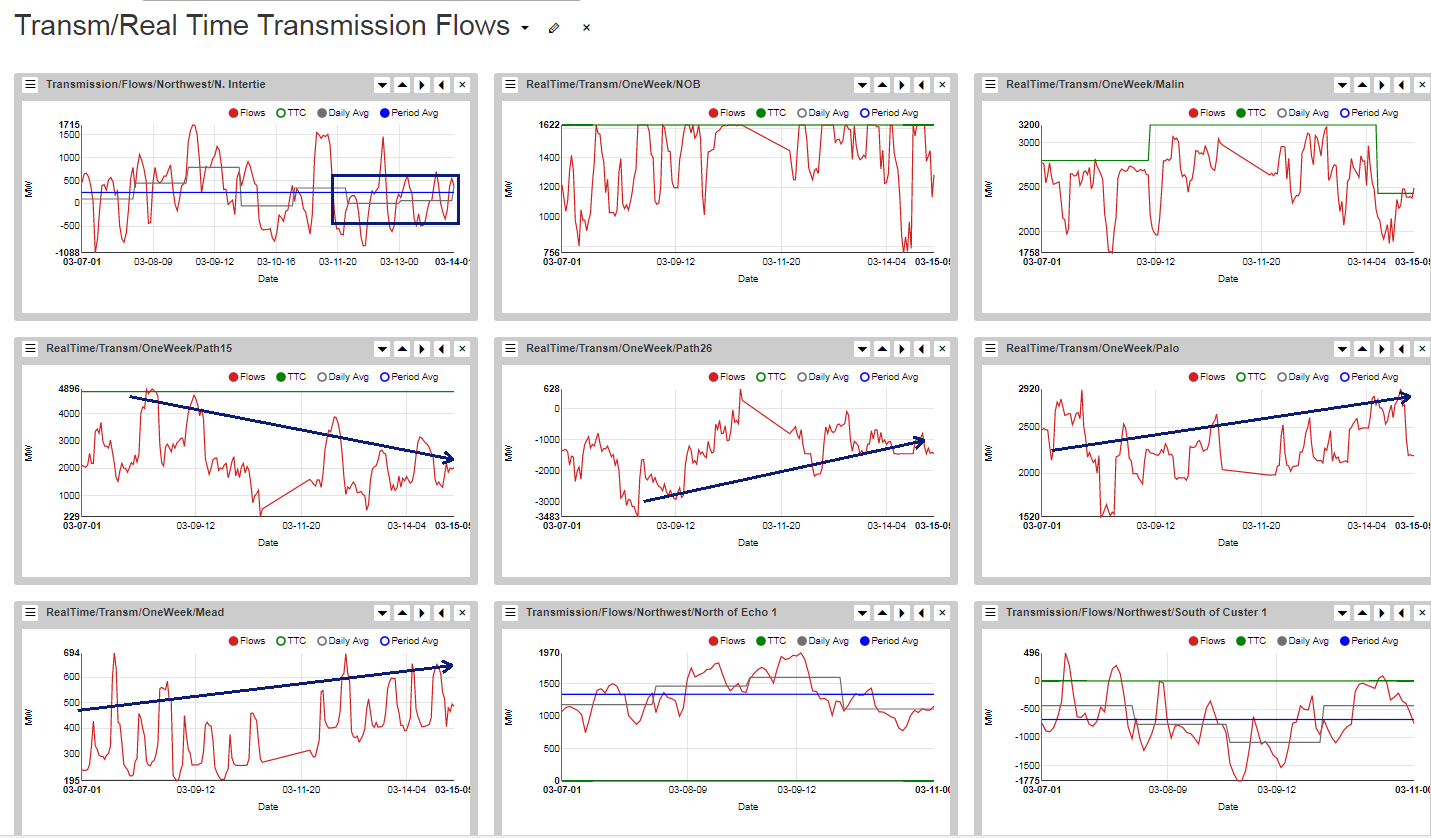 Not much energy is flowing north, or south, on the Northern Intertie. Same is true on Path 15 and 26; Palo is exporting more, so is Mead. The AC and DC are more full than not, frequently hitting TTC.