Our takeaway from the fundy crawl was more bullish in the Northwest and Southwest and just neutral to bearish in the ISO. Let’s see how the market is managing all of these changes. 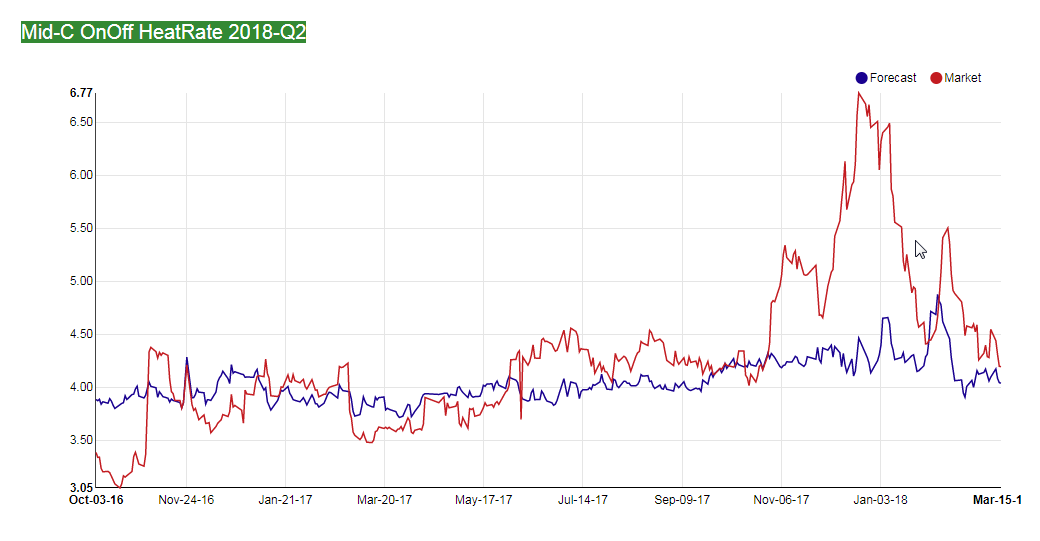 This is a classic example of “irrational exuberance,” Greenspan would love it. The market soared last Dec-Jan and regretted it ever since; now the On|Off is just reasonably priced. 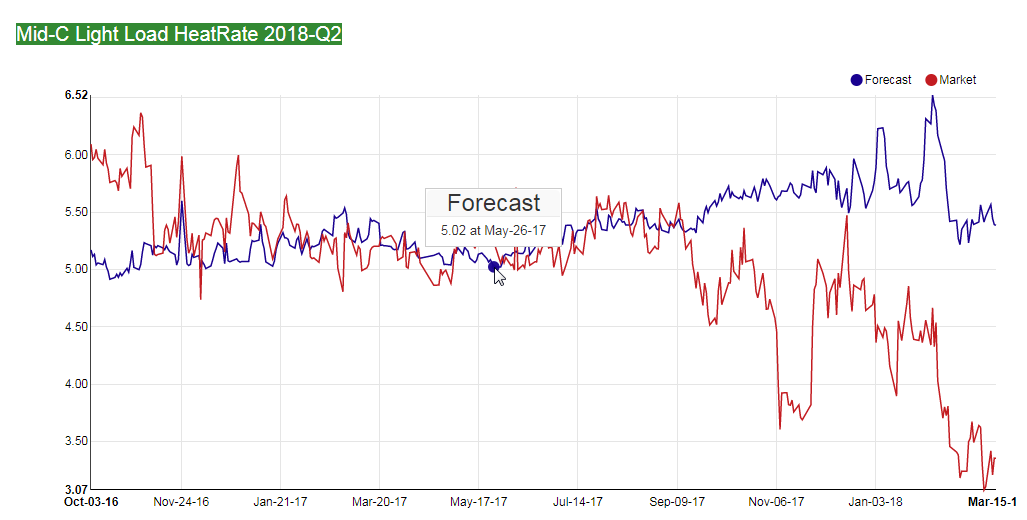 The Q2 MidC LL is cheap, but may be reasonably priced? We believe ultimate cash values will be determined by CDDs; a lot of those and this might be rich; not many and it’s the buy of the year. We currently have none, we have HDDs, and as long as the forecast stays normal to below, we’d keep buying this. But, that said, the best opportunities are going to be captured by splitting out the bullets. 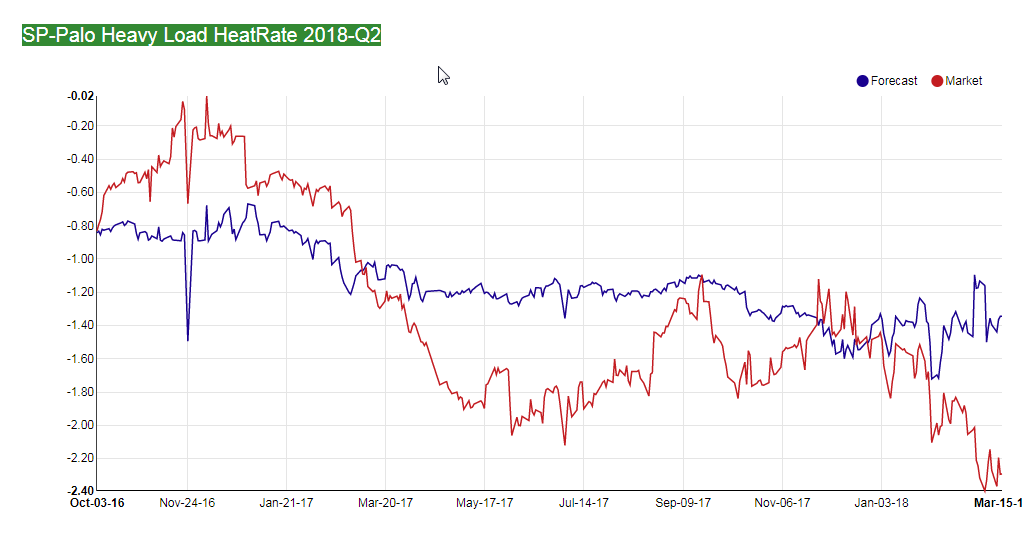 You can own the spread at a contract low if you want to. We’d be cautious about buying given recent ISO weather trends: cold and wet. However, this is a vast spread, a premium to Palo, but some of that may be explained by those $1.00 handles at San Juan. Still, it’s cheap, and you get to be long at SP 🙂 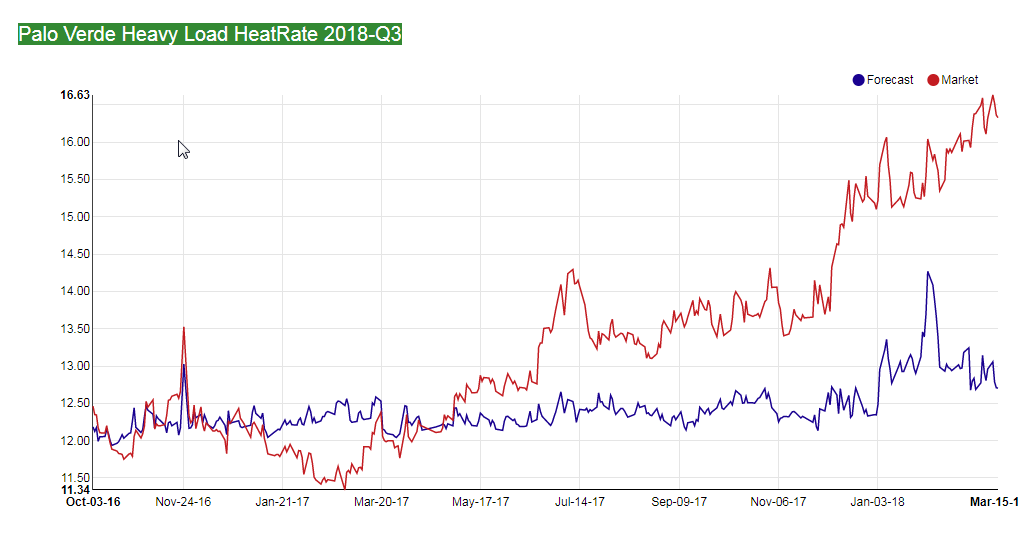 This looks more like the Dow than a power plot, but it is the PV Q3 HL. Not sure why this just keeps going up, aside from that self-fulfilling prophecy which states “every time I buy, I make money; every time I sell, I lose money.” At some point, reality will set in; do you think PV will clear 16k every HL day, all summer long? Still, not for the faint of heart and we’d probably pass, but I wouldn’t fire you if you sold it here. 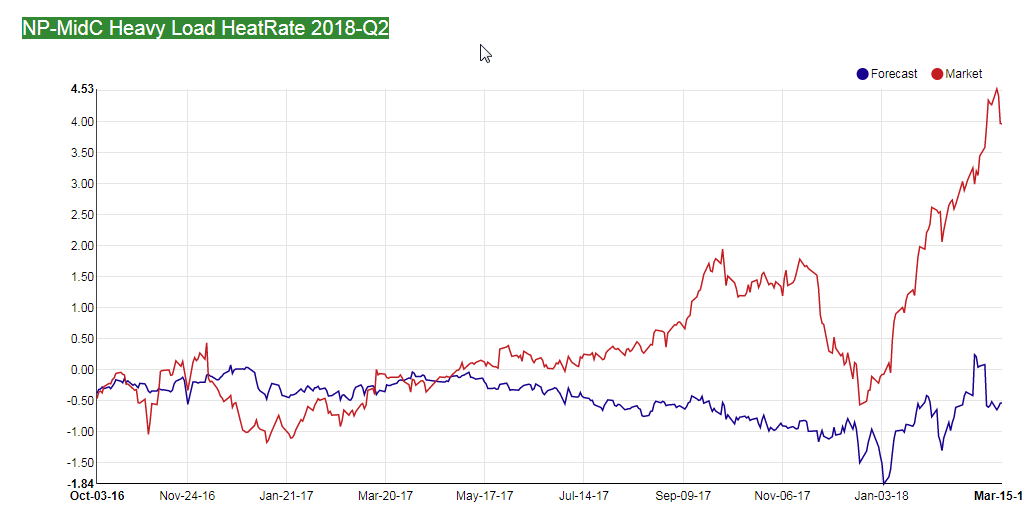 This is more bitcoin-esque than DOW but is equally impressive. Given recent trends, it may be time to step in front of this runaway freight train and say “enough is enough.” We know this: 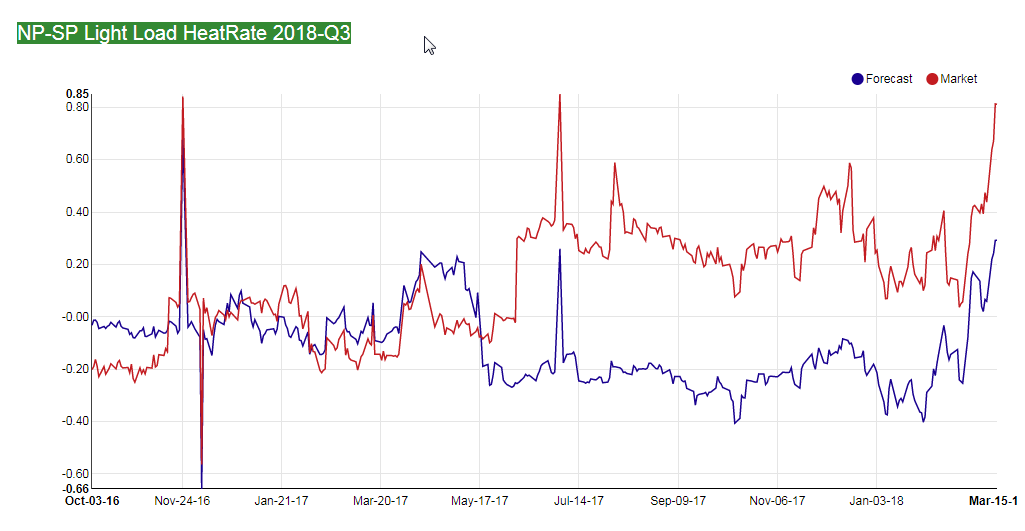 That doubling of snow means more energy in NP than SP, so why is the spread blowing out? Probably cash, but now you can own SP and get paid; we’d be tempted to sell this. 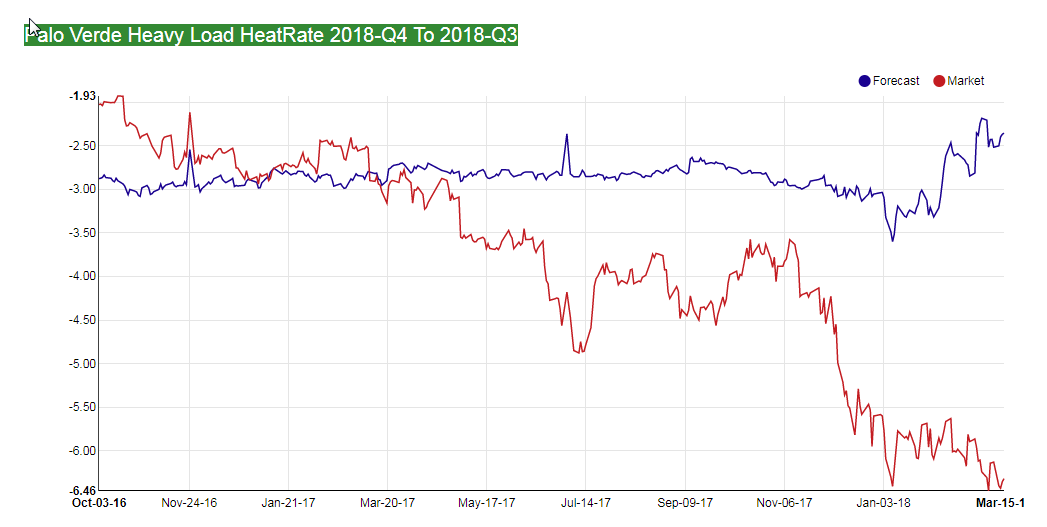 The Q4|3 roll is driven 100% by the three; we already talked about it. Maybe a safer way to play it is to buy the roll? You’re still short the daily Q3 Palo call, which his a dangerous proposition. These near-term rolls always sound good when your 3-4 months away from delivery, but what happens when your Risk Manager stops you out of the short leg (the three), then the market pukes, and you must dump your four. 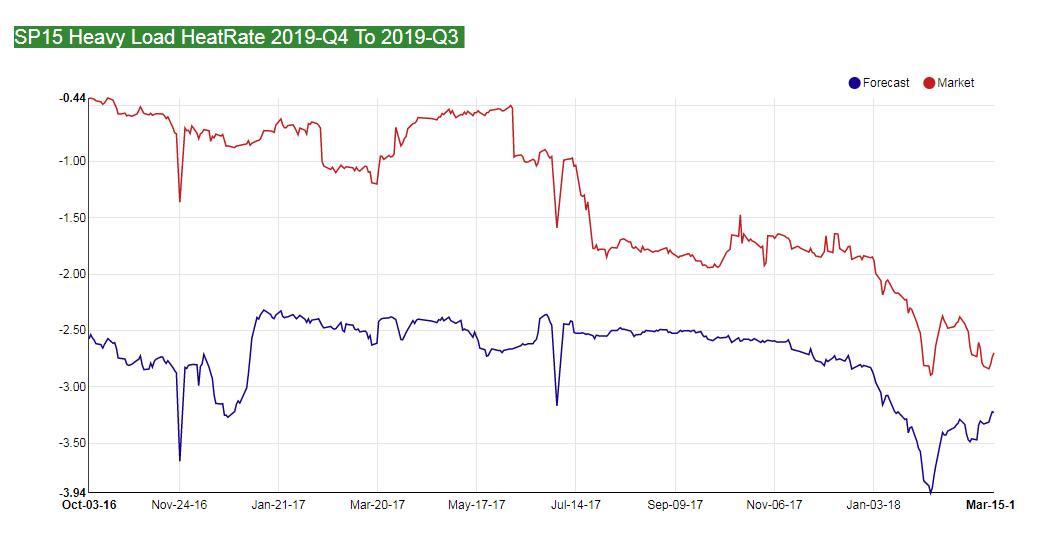 Same trade, just at SP in 2019, but impressive that this year-on-year roll has steadily declined for over a year. We get that 2018 is dry and no one has a clue about 2019, but perhaps it’s oversold? After all, the water year is building. 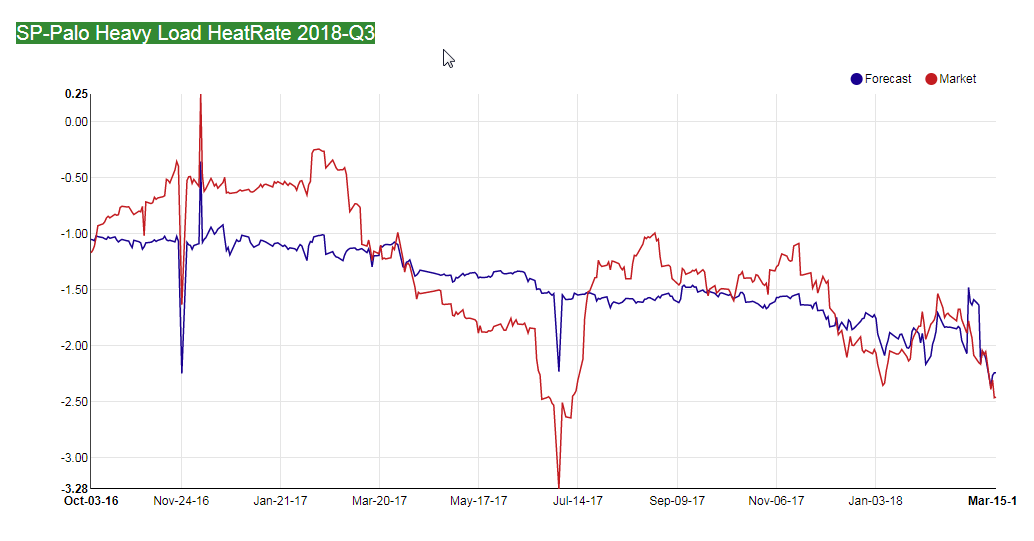 We talked about the Q2, here is the three, and aside from the freak show last June, this has been steadily decaying in value, rather sharply of late. Though we don’t subscribe to the Socal Gas Armageddon story, still you can own some SP reasonably cheap via the spread. 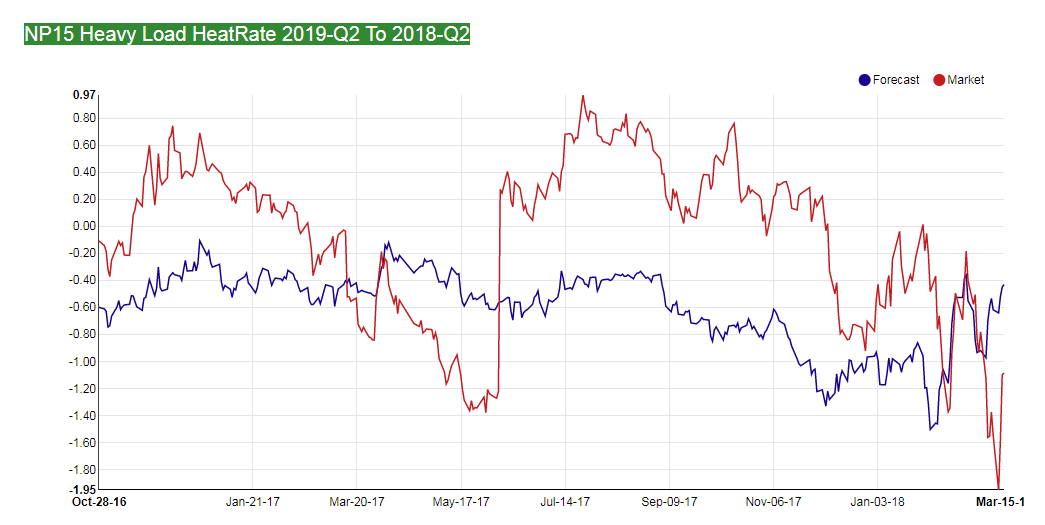 Here’s another of those YOY rolls, this one the NP Q2 HL. Note how cheap it was last week, now not so much, but still probably a buy. As long as NP keeps building its snowpack, this roll should grow richer.

This next set of charts are the most significant Rank Reversals; this one demonstrates how hard the on|off came off. It gave up three weeks of gains in two days but is still more rich than cheap. 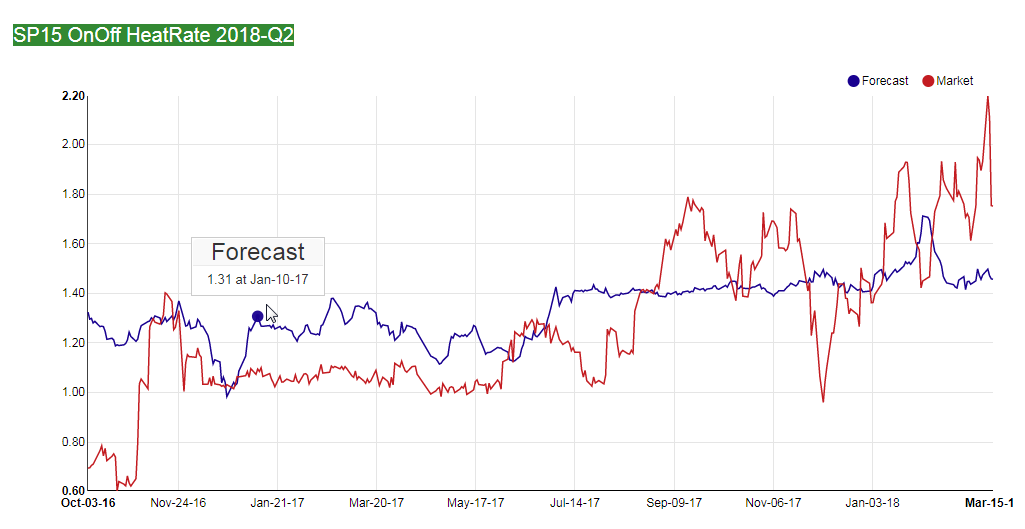 Same trade, just at SP, and same move. This is probably more attractive from the buy side since they hydro impact is but half of NP. 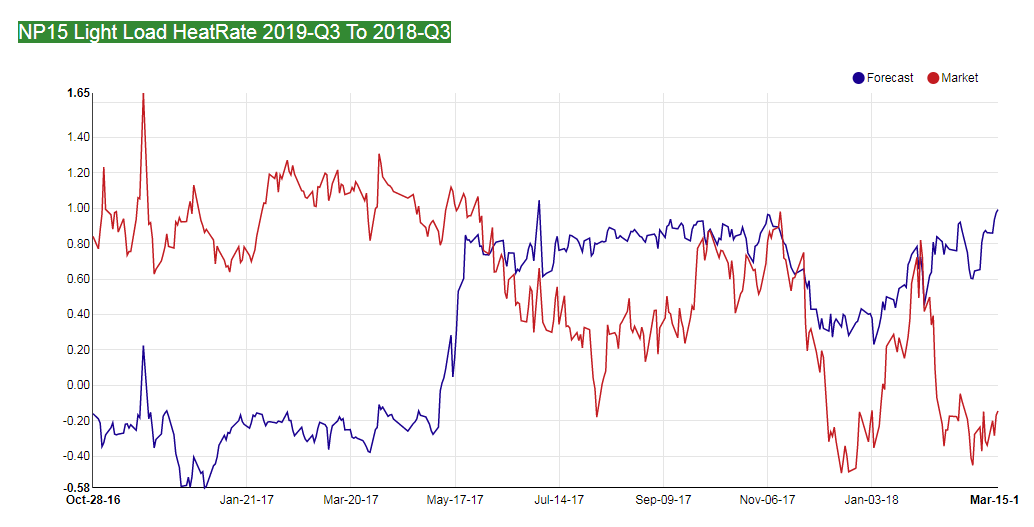 One more YOY, this one the Q3 NP LL. The last time the roll was this cheap, it rallied about 1500 btus. A wetter 2018 will drive another rally.

We have several new users today, let me explain what the above table represents. Ansergy values every forward derivative against each other and ranks them regarding execution opportunity. In the above table, I filtered out just the Mid-C HL monthlies. Twice a week this blog discusses those bullets, including the adjacent rolls, because it is runoff season and often these trades are the most volatile, and thereby the most profitable in the curve. 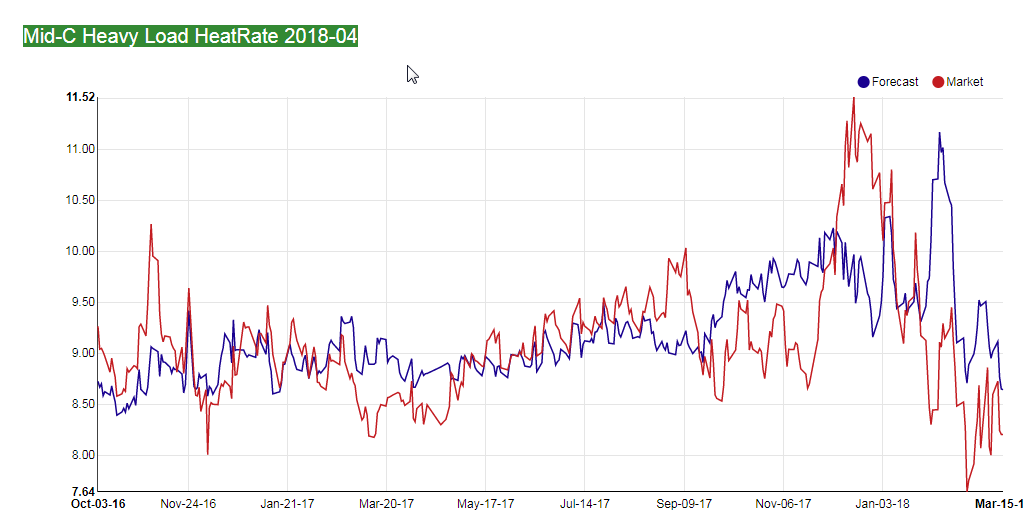 April is cheap, but in a massive water year why wouldn’t it be? That said, the runoff hasn’t started, and BPA only needs to pull 25′ out of Roosevelt over the next 45 days. Offsetting that draft are the builds at Mica, plus many projects are ahead of draft schedule. Toss in the start of the fish spill on April 1, and you start asking how bearish is April? Let’s look to the STP to help answer that.

Last year realized 10,000 aMW of energy equivalents more than this year, of course, a lot of that was a surplus spill. Still, nine years had more water in April than this year. How bearish should April be – not as much as the market thinks and, as long as it stays normal to cold, we’d keep buying it.

We’d buy this, too, for the same reasons stated above. For one, it’s a lot cheaper, and if you like April you have to like May; if April is clearing 8k heat rates, do you think prompt will be 6k?

Total energy is probably right if the weather is normal. If its cold, then look at 2008 as your probable case – about 2000 aMW lower. Bear in mind; cold also means about 2000 aMW more load than normal weather. We’d own this, too. Which one is best? 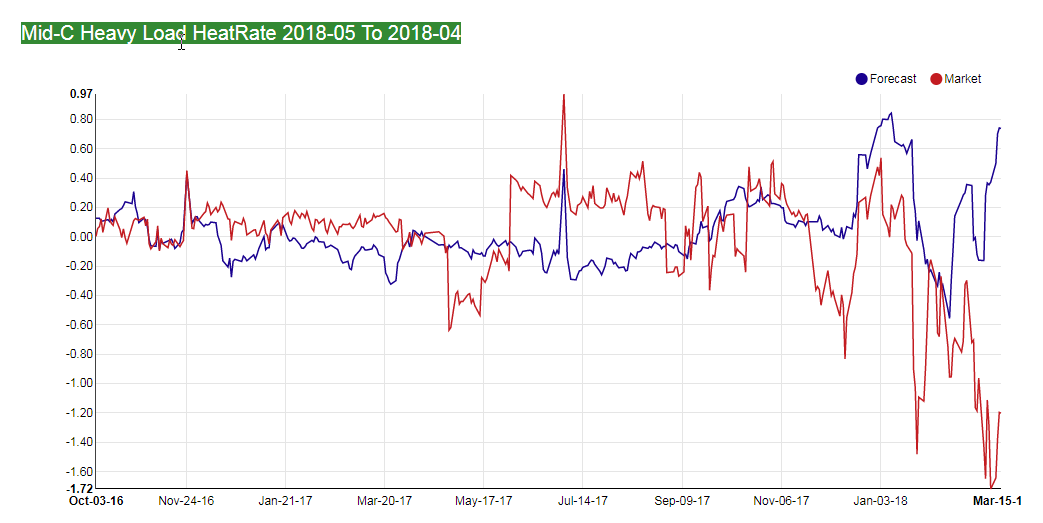 The roll would suggest May given that we’re bouncing at the bottom, and the forecast is taking off. We’d concur, but being greedy, we’d be happy owning both. 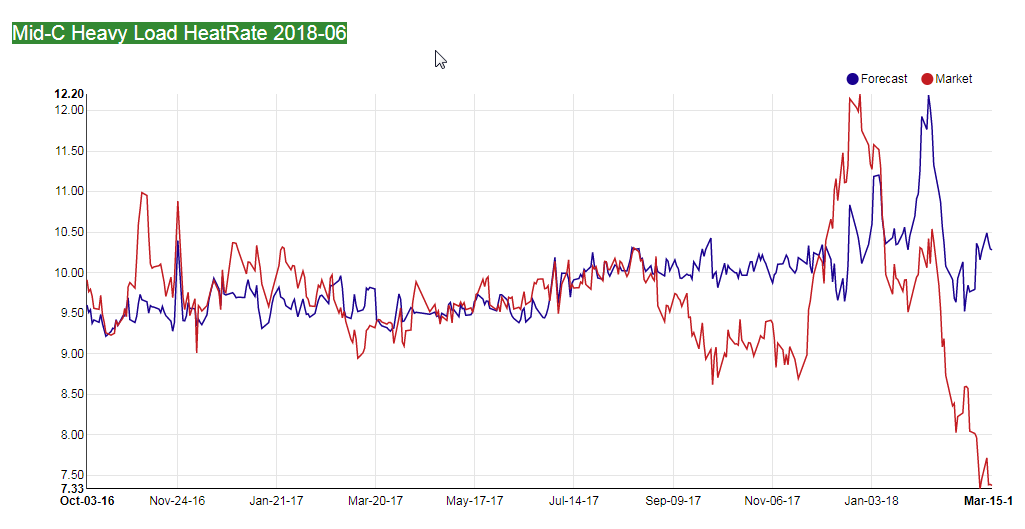 Well, this is interesting. The market loved the June long time, then tossed her onto the street in deep disdain. Now Mr. Market despises June, and we don’t disagree. Cold weather means deferral of melt, so if you buy into that coldish spring propaganda, you have to like June less and less. 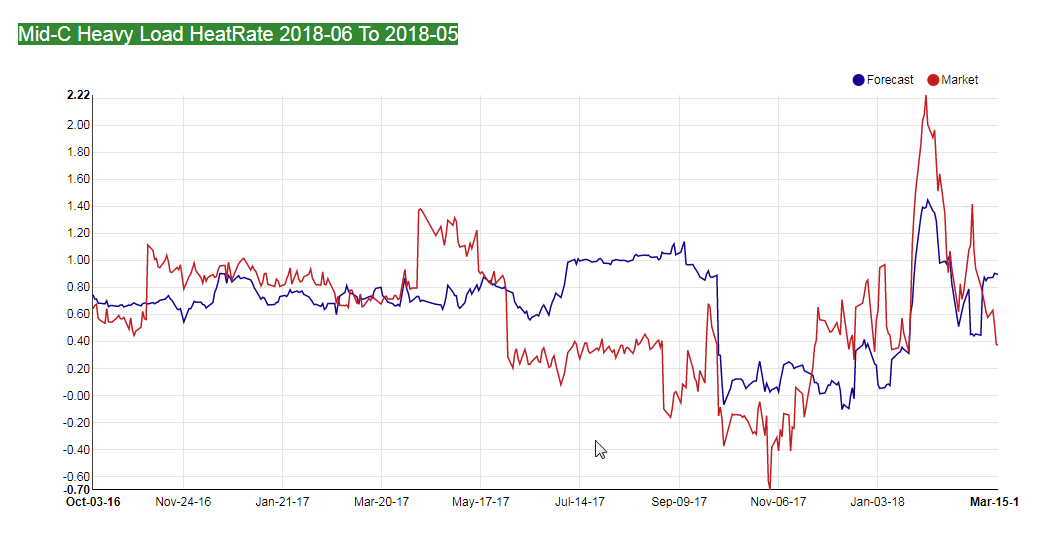 Wow, you can own the roll for the same price as last summer. It has come off hard, but we think there is more room to slide, as long as it stays cold. So, for each 6-10 cold forecast, we’d short a piece or so of the roll. If it gets warm (70-80s in Kalispell) than hurry and flip out of it as May would get smoked, so would April. 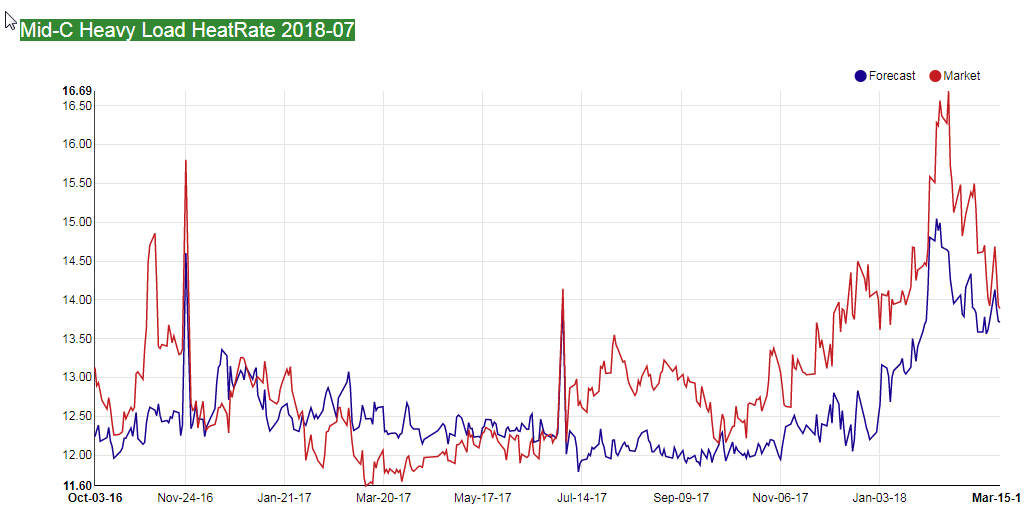 July took a stumble but has a long ways to go. We don’t think the STP has it right; there may be another 3000 MW of energy left to add to that strip. Once the Slicers get confirmation from Big Brother, they’ll pound the bids; we’d hit them right now. 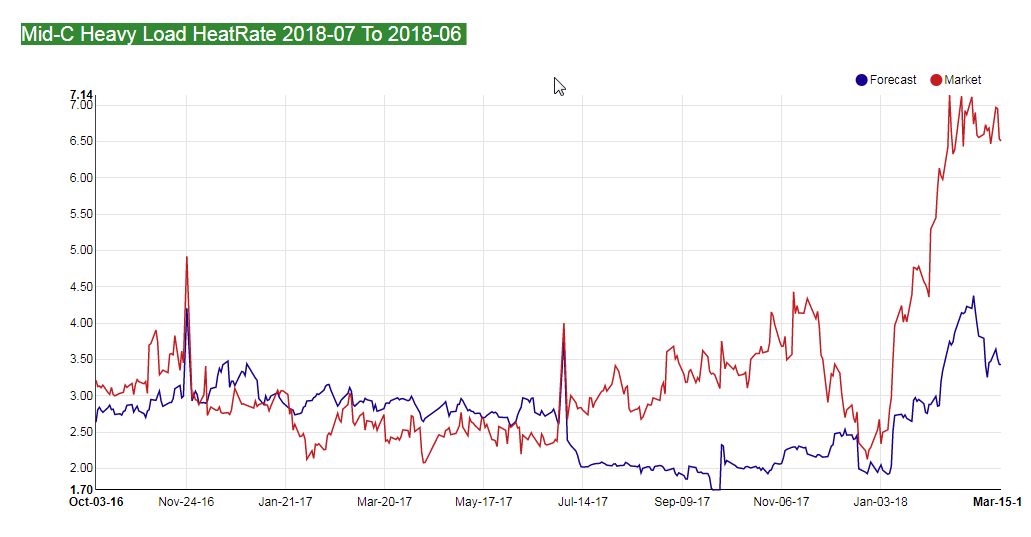 We’d pound this, too.