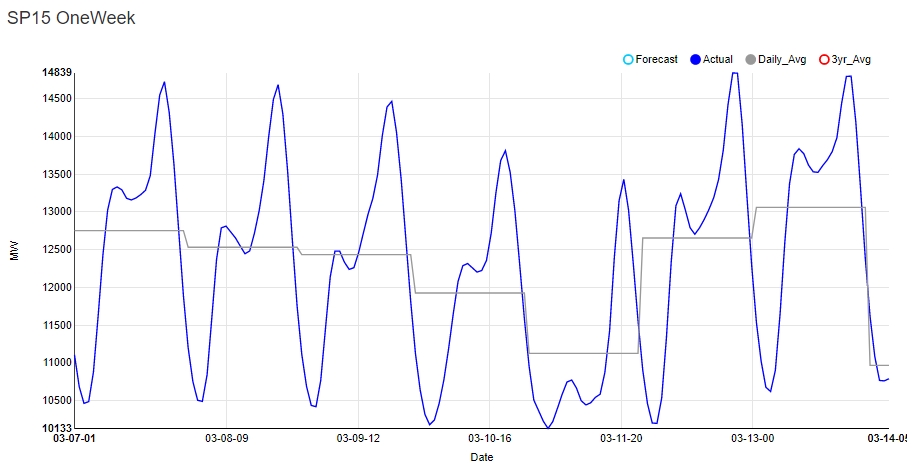 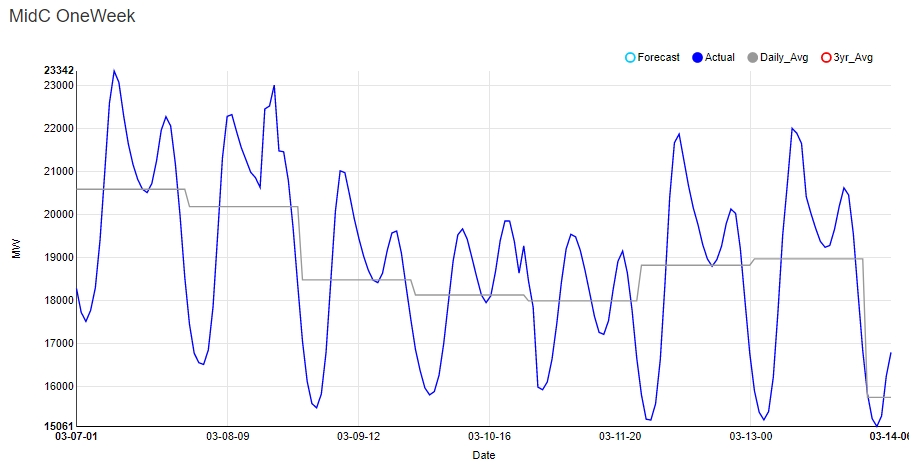 Mid-C peak load reached 22,006 MW yesterday, a day-on-day increase of 130 MW.  Minimum light load demand essentially stayed flat with just a 4 MW increase.  Factor those two together and you get a daily aggregate increase of 150 MW.  Loads are down 1,600 MW week-on-week. 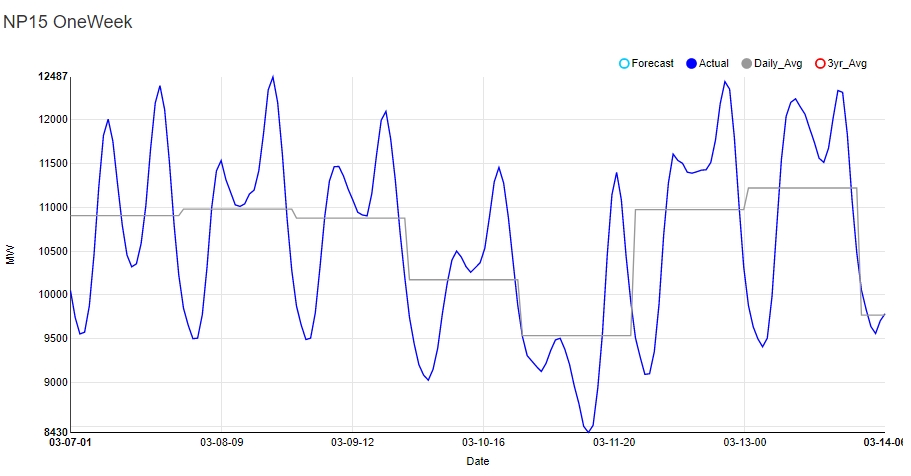 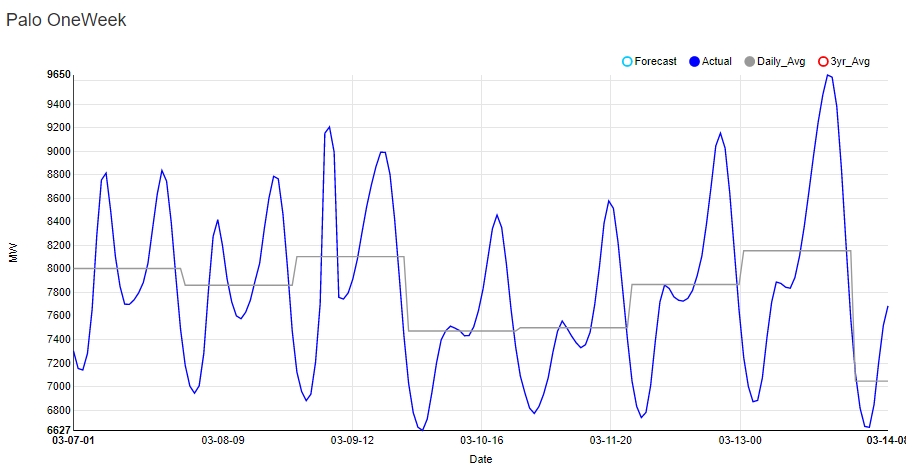 Peak demand exploded in PV yesterday as late-afternoon loads reached 9,650 MW, a day-on-day increase of 495 MW.  This brought the daily average to 8,155 MW, an increase of 280 MW compared to Monday.

After warming up over the weekend, the West is quickly cooling down as just two stations show a temp anomaly greater than one degree (positive).  Temps cool off considerably as you move away from the coasts as Palm Springs shows up seven degrees below normal, and Las Vegas at just over nine degrees from average.

Highs are projected to stay below average for nearly two more weeks and will hit the bottom at 57 on the 16th, 13 degrees below normal.  Next week warmed up a few degrees compared to yesterday’s projections but remain 5+ degrees from normal.

Similar chart for Palm Springs as temps should fit nicely into a neutral degree-day through the weekend.  The 17th will top out at 68, 11 degrees below normal.

Much cooler in Northern California where San Jose will sit in the high 50’s through the 17th and fall as much as ten degrees below normal.  Just two days are projected above average until the 29th.

You have to move into the mountains to see highs reach significantly above normal.  Salt Lake should hit 84 today, eleven degrees above average, but quickly fall back to the red line thereafter.

One last warm day for Phoenix as well as today is projected to reach 84 — eight above normal.  Temps will sink as low as 66 by the 18th before finishing out March by hugging the normal line into the high 70’s.

Seattle showed up as one of the only above-average stations in terms of 10-day aggregate temps, but it isn’t because daily highs are expected to hit anything notable, it’s because daily lows are mostly above normal at the tail-end of the forecast.

Same story in Spokane where lows should stay consistently above freezing for the rest of the month.  Low-level snow will disappear quick if it hasn’t already.

Steady increases are in store for the 10-Day RFC forecast beginning today and culminating in 15,379 by the 16th before smoothing out with a gradual decline through the remainder of the forecast.  1,800 aMW are expected to be shed from the 16th to the 23rd. 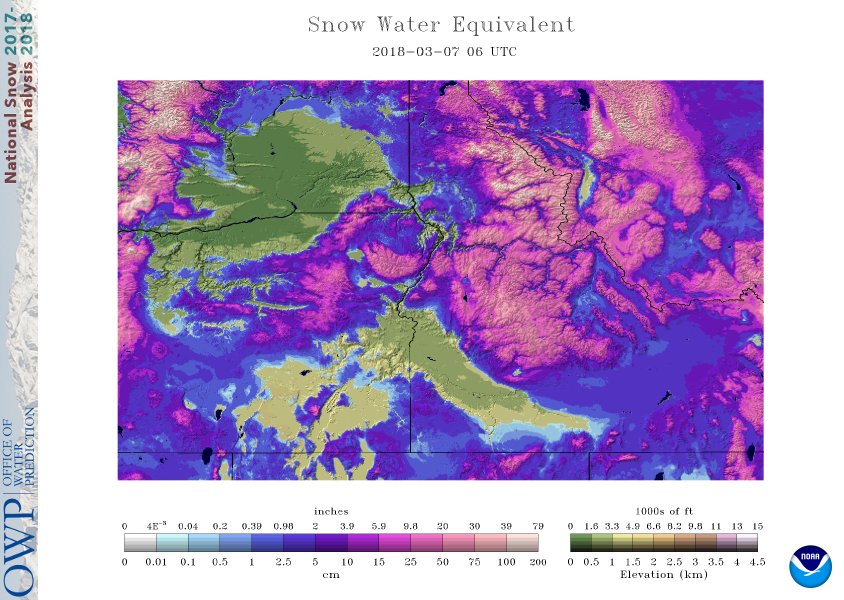 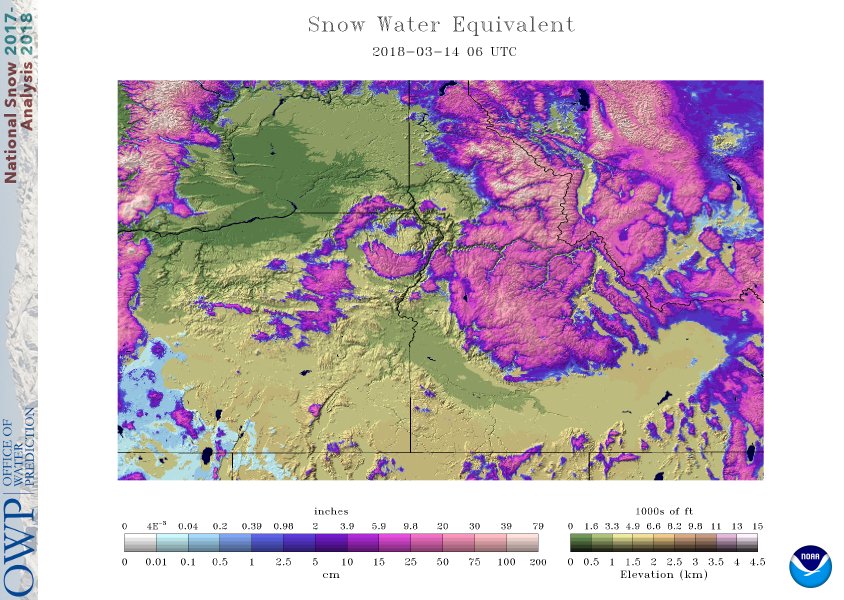 Here is a week-on-week look at what the Northwest’s warm up did to low-level snow through the area.  Anything below 2,500 is likely bone dry in Eastern Washington and Oregon, while even Montana felt significant losses in the valleys.

The Lower Snake Sideflows took the largest week-on-week leap thanks to low-level snow melt, adding nearly 12,000 CFS, or a 37% increase.  the Lower Columbia Sideflows didn’t have the CFS to match that increase but did see a 46% increase in flows.

Worth noting that despite the heavy week-on-week increases, the flows pale in comparison to the same date last year.

The Consumnes, on the other hand, has more than doubled to output seen on the same date last year with 3,594 CFS.

The Northwest hubs still sit comfortably above average while everything south and east hold at or below 50% or normal.

DC2 refueling and maintenance continues today, though should be winding down relatively soon as we pass one-month of 0% capacity.