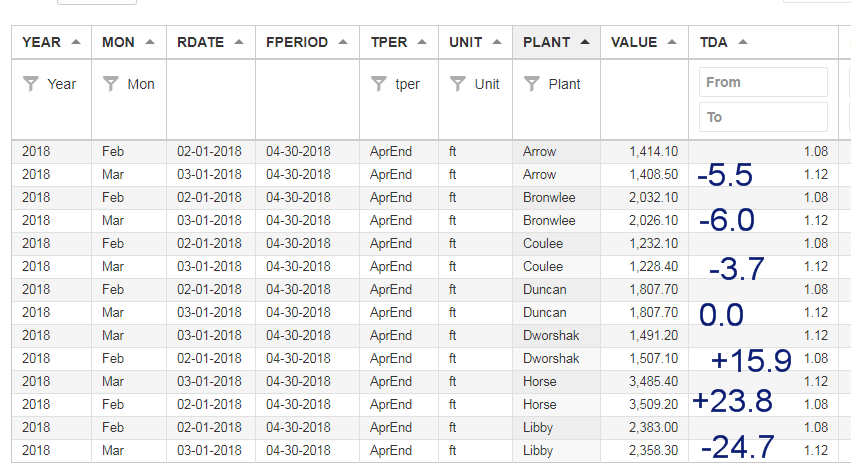 We all knew it had to be a deeper draft; the TDA water supply was up 4%. And, well, it was “kind of” a deeper draft, the above table illustrates the changes at each project for the end of April targets. Arrow will pull another 5.5′, Brownlee will draft an additional six feet. Coulee barely changed, just a modest 3.7′, which is about two days of drafting when the pond is so low.

Now for the surprises  – both Dworkshak and Horse saw big fills during this period, 15.9′ and 23.8′, respectively; while Libby will pull an additional 24.7′. Horse and Libby more or less offset each other, though the cuts on Horse have a more significant energy impact than Libby since there is much more USA capacity downstream of the former.

Net-net, this was a big yawner, and we are more enamored of cheap MidC power than we were last week, especially given a return to cool and continued dry – more on that later.

Spot gas has tempered, especially at that crackhouse known as Socal Citygate: 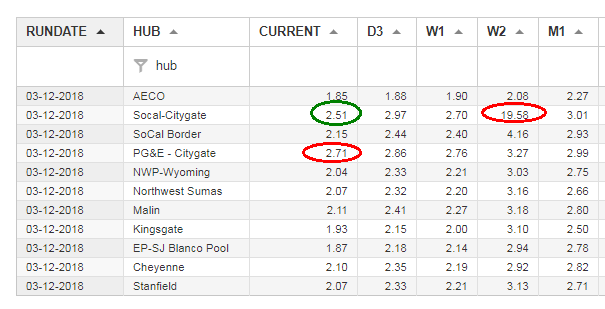 PG&E settled premium to SCC, and all hubs are remarkably tight to the two citygates. WECC gas demand is also reasonably high for this late in the season. 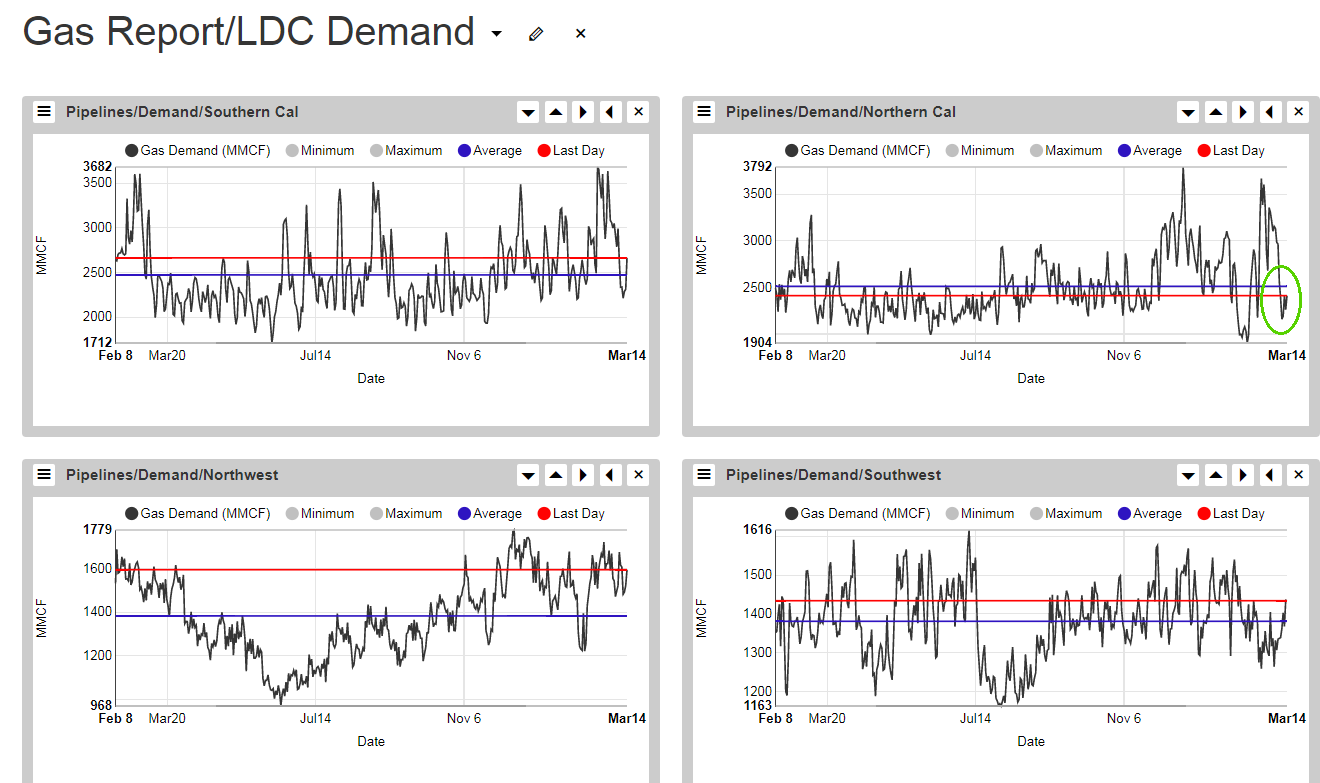 Well, maybe not in NoCal, but the Northwest and Southwest are strong.

The Northwest warmed up over the weekend, Seattle will be in the high 60s today, but then the region cools down to climo. Loads took a beating, off several thousand MWs. For the foreseeable future, there is no more heat and the snow will stay on the mountains thereby rendering bom and prompt potential buys, more on that later. 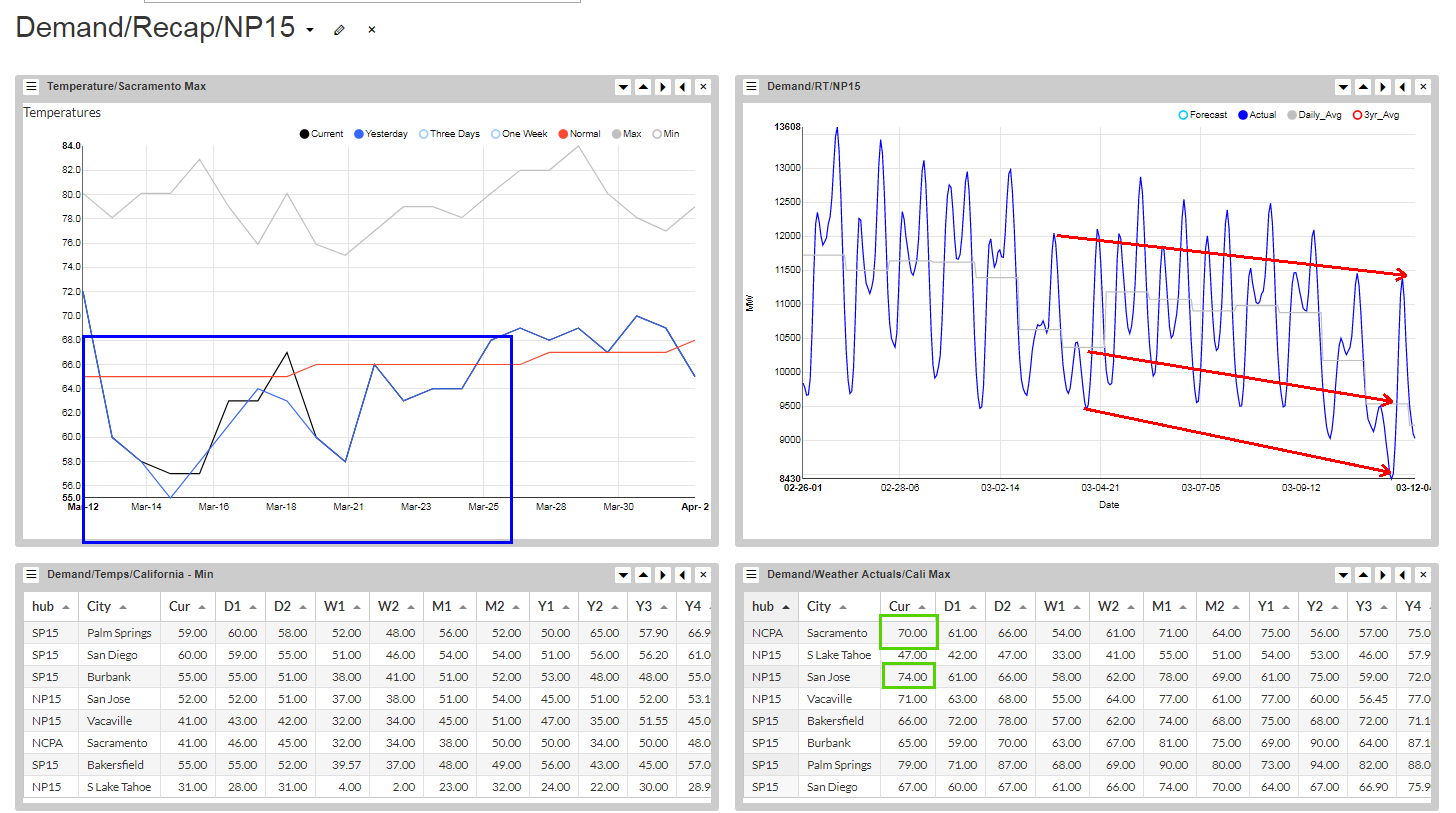 Like Mid-C, NP15 loads tanked off of the lovely 70s in the Bay Area; 75 in San Jose – lucky. But the hub drifts back to cool, if not cold, for the next ten days. Not cold enough to create gas supply panic, we are too deep into the calendar for that to happen, note the upward sloping climo line (red). The average is now about ten degrees warmer than January and rapidly moving up. 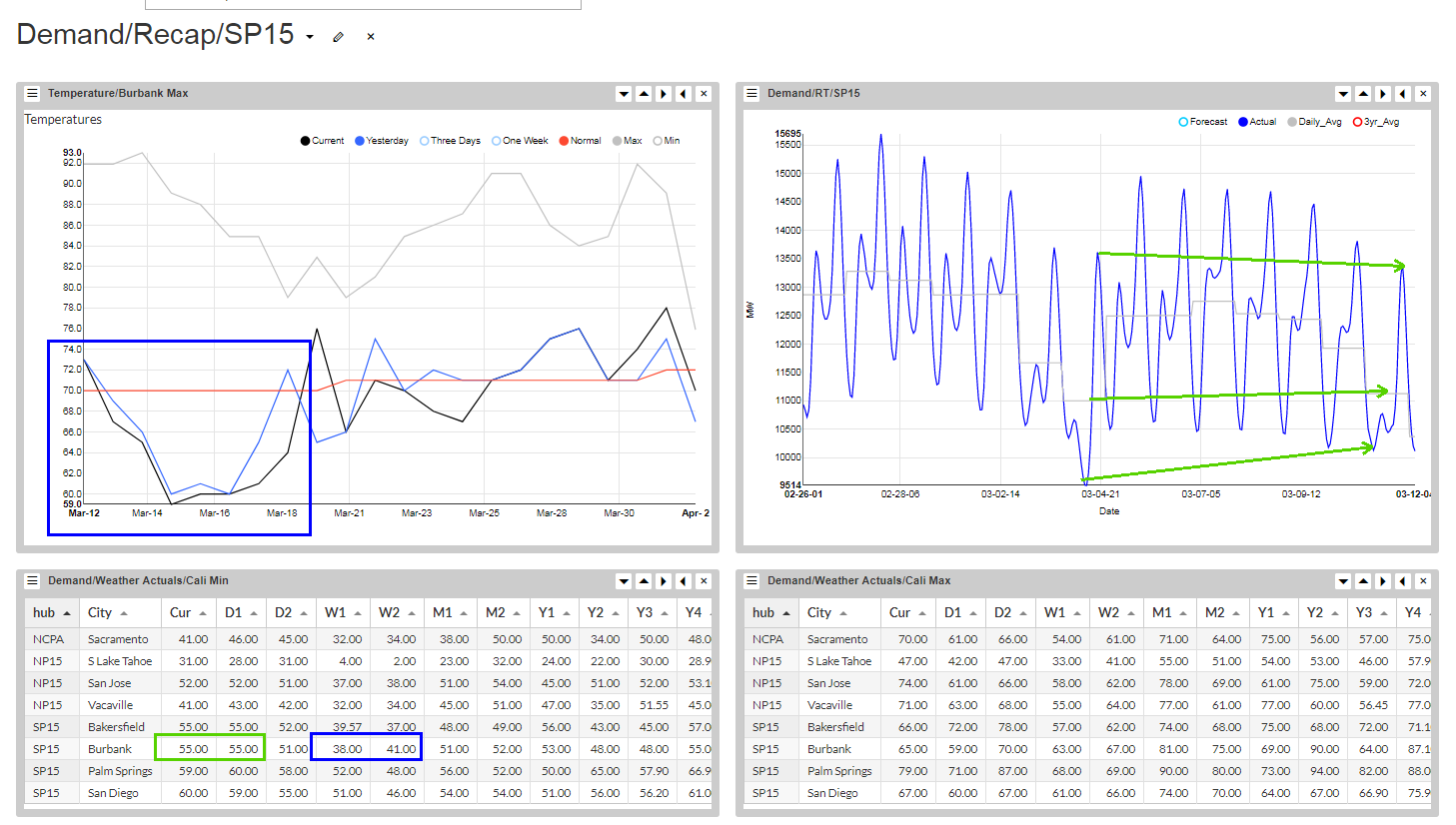 SP’s loads didn’t tank, but they never rallied to make a collapse possible. Now the LA Basin is poised to get chilly again – don’t put away those faux furs just yet, temperatures may touch the 40s again. They do hit the 40s, a bone-numbing 46 next Saturday – oh my. 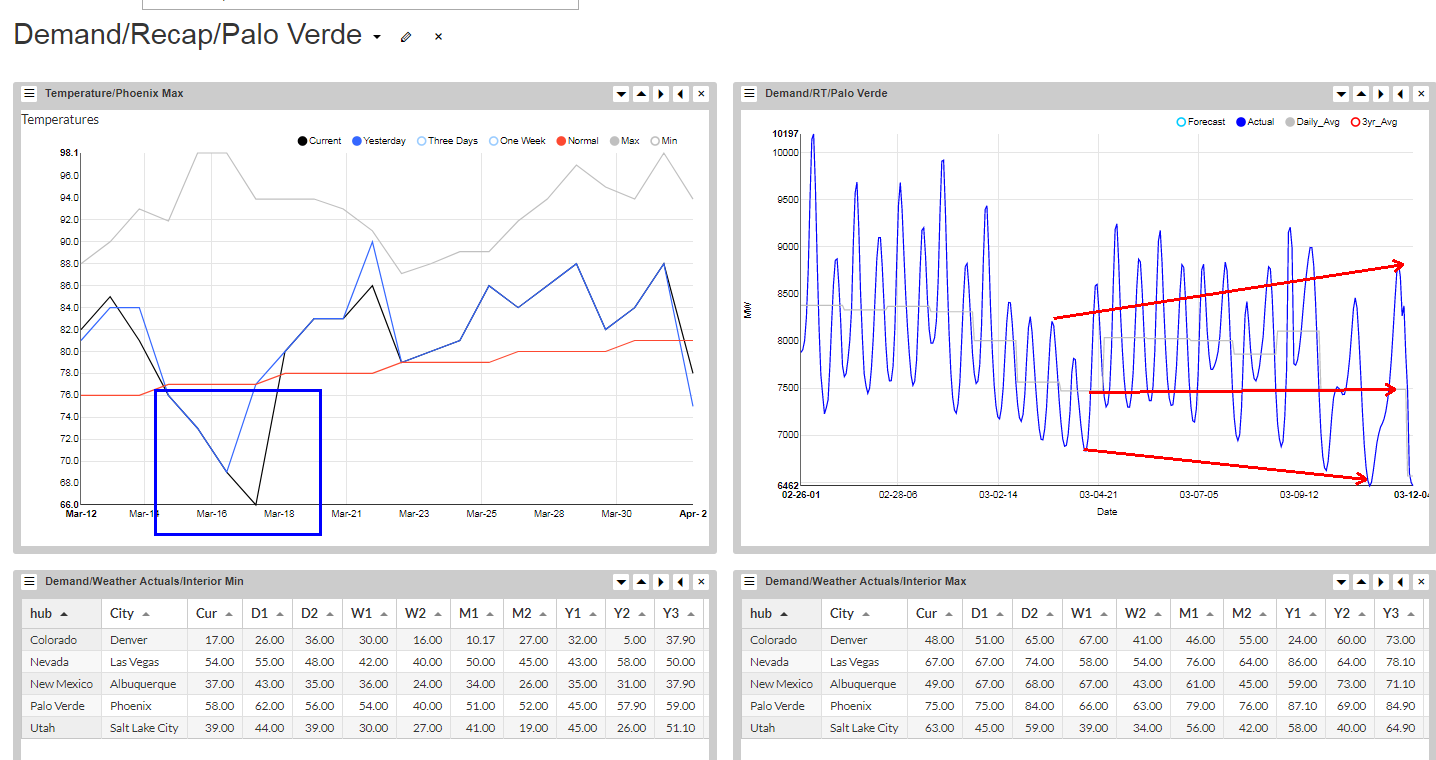 Surprisingly, Palo loads rallied, week-on-week, off of warm weather, like the 80s. But that too shall pass as AZ, like the rest of the WECC, drifts colder for the next eight days. 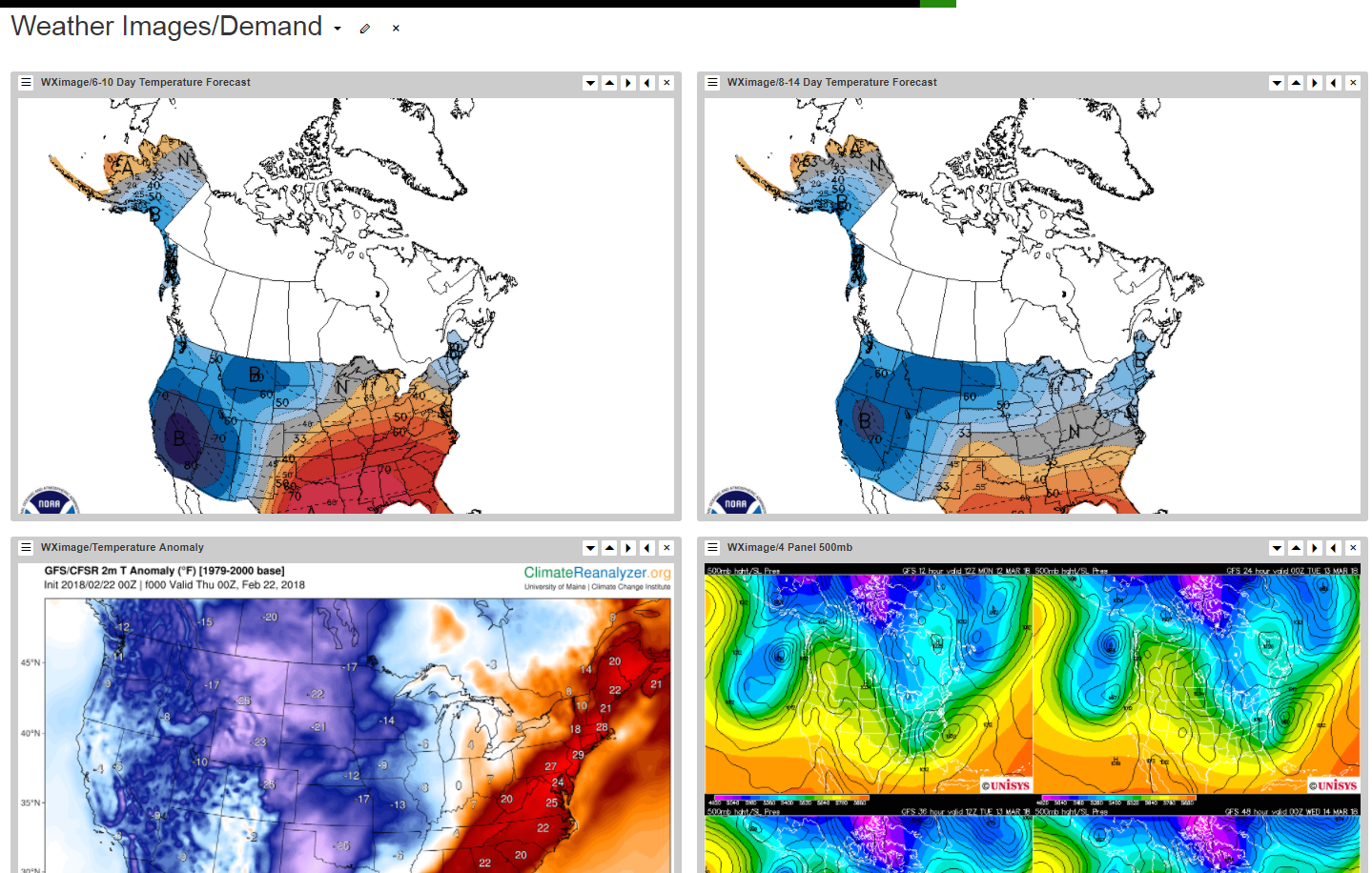 Numbers don’t lie, but pictures do. You’d think LA would see glaciers encroaching on the basin, but alas, that dark blue means 46. Even 46 for lows is relevant since nothing is going to melt in the Sierras for the next ten days. 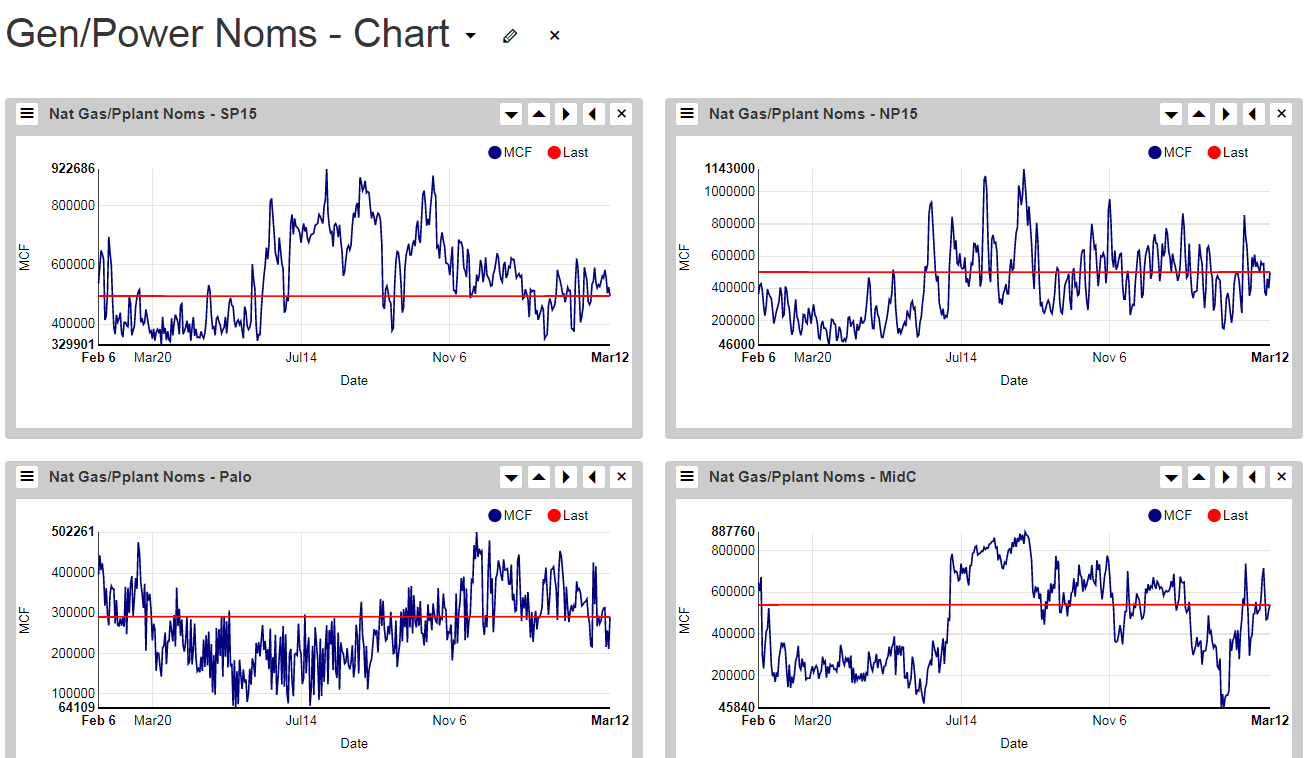 Power plant gas nominations are just sideways, most have come off a bit from last week. 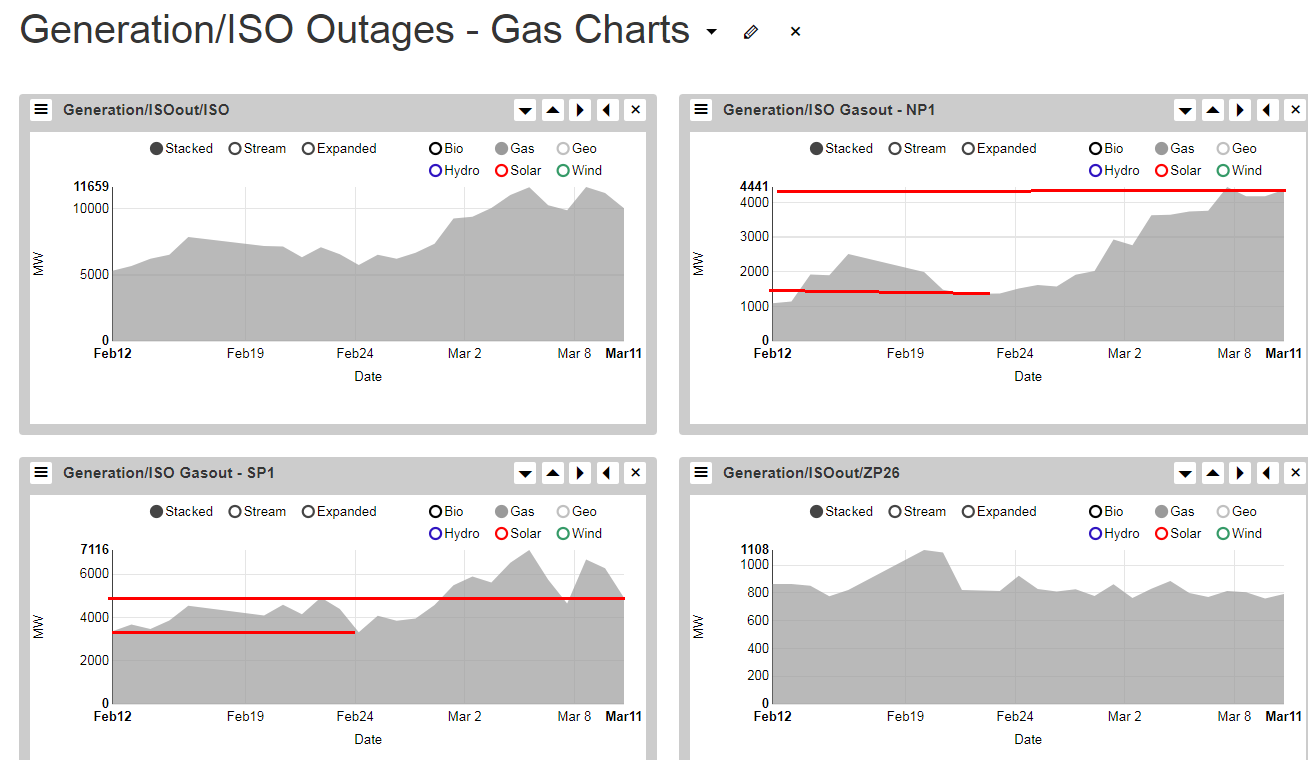 NP has strong gas outages, SP not so much, but given where either hub sits in the stack, and no AC load on the near horizon, outages really don’t matter. 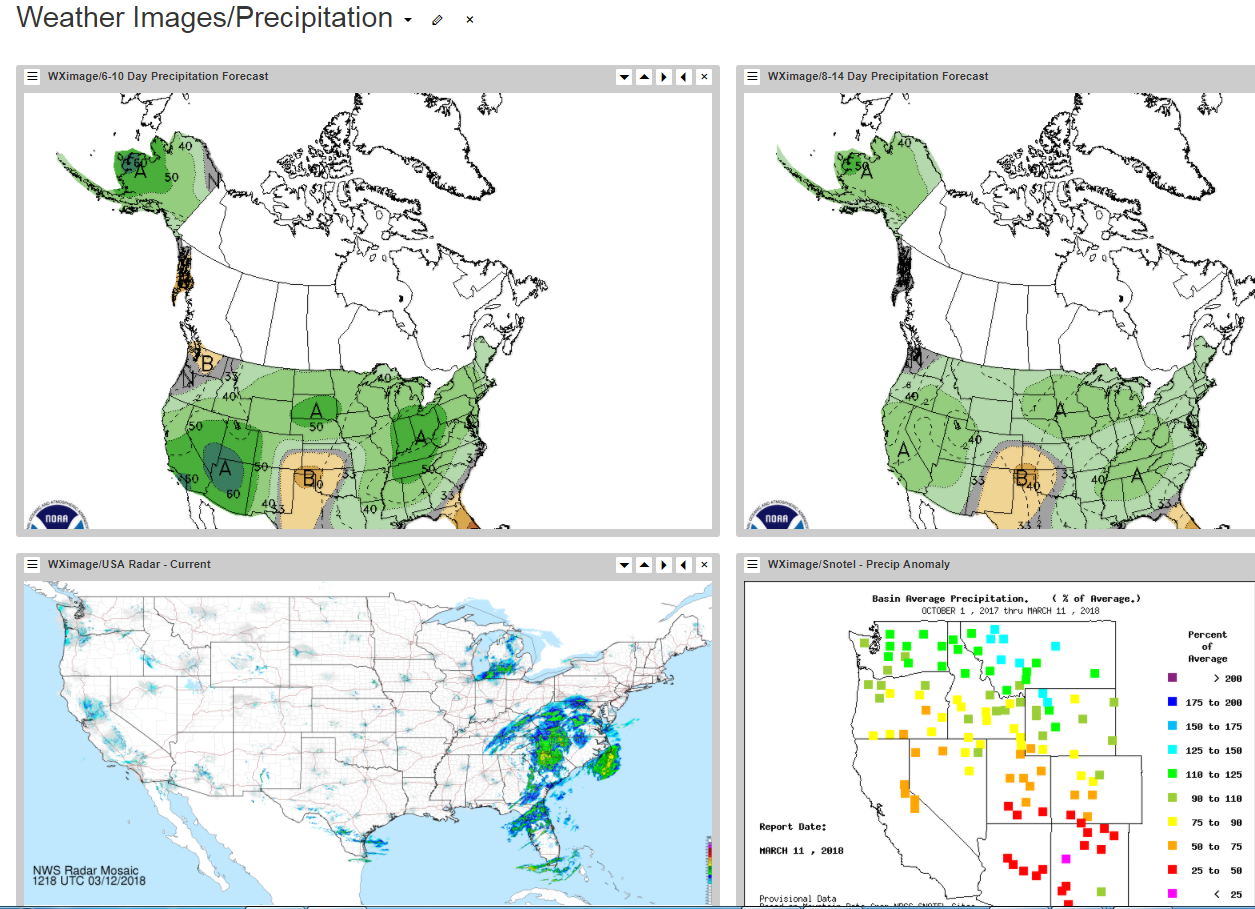 There’s a first, NOAA shows the Northwest below average, though the station level data has been saying that for the last month. The Southwest is poised to get the most significant anomaly, in fact, the amount of precip heading to CA and its neighbors is material:

Today’s forecast, arguably, is the biggest ten-day of the season, though it is just the equivalent of the ten-year average. What makes these events important is the cold weather, all will come down as snow at relatively low elevations. Where CA was staring at one of its worst water years on record a few weeks back, now its just a low water year, but growing. Watch out for May and June; this cumulating snow is going to drive some strong runoff, though for just a short period.

We already see a change in CA hydro energy: 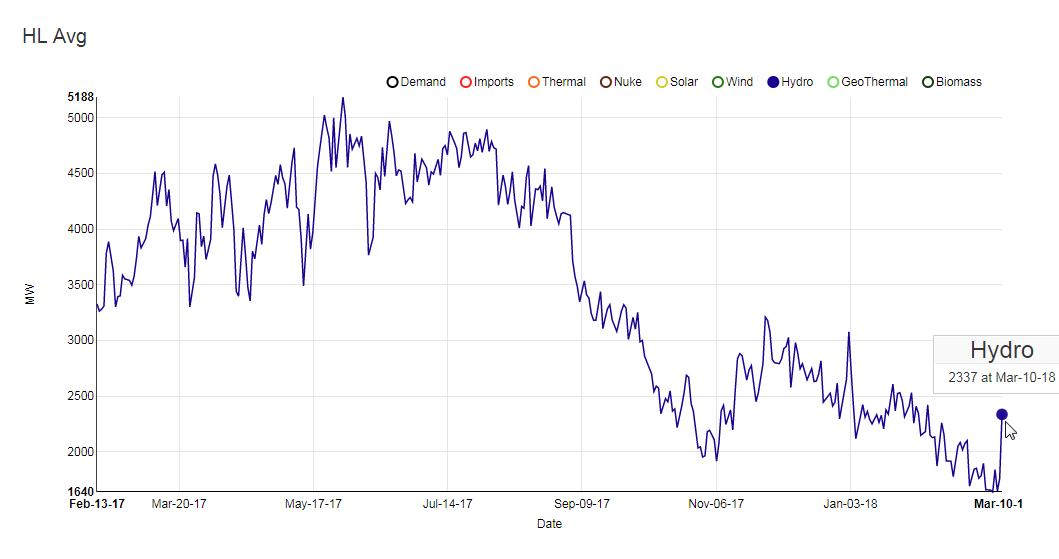 Production jumped about 800 aMW from two weeks ago, and with more big rain heading to CA those levels probably won’t back down, they may keep moving up.

The Northwest’s outlook is just the opposite; expected cumulative precip is about 1/3rd of normal. The snowpack remains large, but the drafts are pretty much locked in, and the final wild card will be when it melts. With a current cold trend, we’d be biased towards a late runoff and would be looking for cheap bom-may markets. June and July remain high-risk strips, at least in our opinion.

Coulee production jumped, and the reservoir drafts hard, now down to 1254, a scant 26′ to go to meet its end of April target with 49 days to get there. At some point, BPA is going to stop pulling the reservoir, its way ahead of schedule, and with cold and dry weather BOM could get interesting.

A couple of changes to TTC on the AC. This week’s derate moved up a day and next week’s has been canceled.

Cold WECC is mostly bearish this time of the year. The water outlook in California has grown more bearish, but that will impact April-June, depending on temperature. The outlook in the Northwest grows more bullish, but it was so bearish before this dry weather that doesn’t say much. More on opportunities in a post to follow.