Our takeaway from the earlier post was bullish Northwest (relatively speaking) and bearish Southwest. One big Northwest wildcard, the flood control draft, is now mainly locked in. If anything, we’d be biased towards a lighter draft when the April #s are released, given the dry trend. California, on the other hand, is seeing a strong rally in late season snow builds; nothing like last year, but there will now be a runoff, and when it occurs the ISO will see another 2000 aMW of hydro energy. When it occurs is the operative question, we don’t see any sign of a melt in today’s forecast. 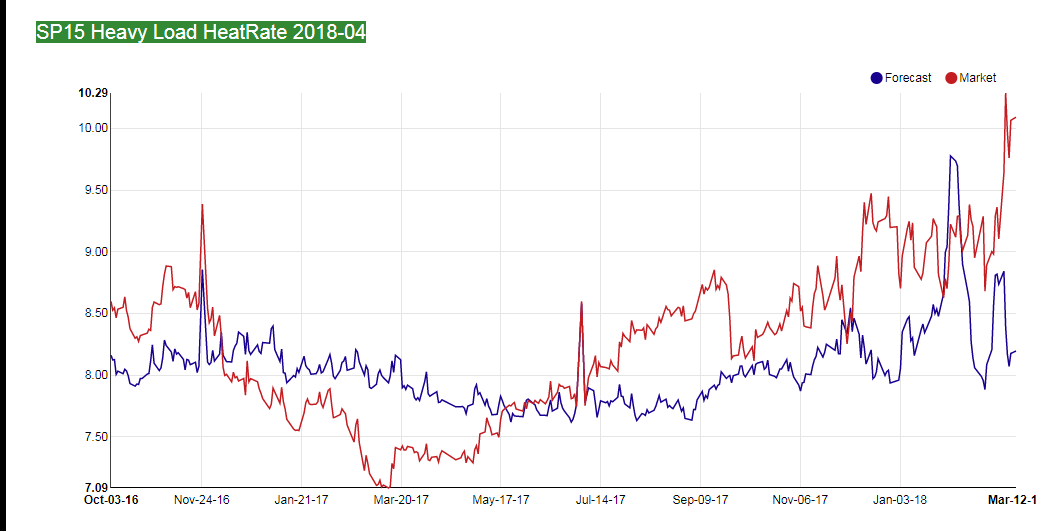 This market, the April SP HL, doesn’t make a lot of sense to me, but nothing at SP has recently. The hub grows more bearish with every inch of rain, and the trend de jour is cold and wet. Not exactly the recipe for runaway prices, which is what the April is doing – running away and setting contract highs. We’ll short here. 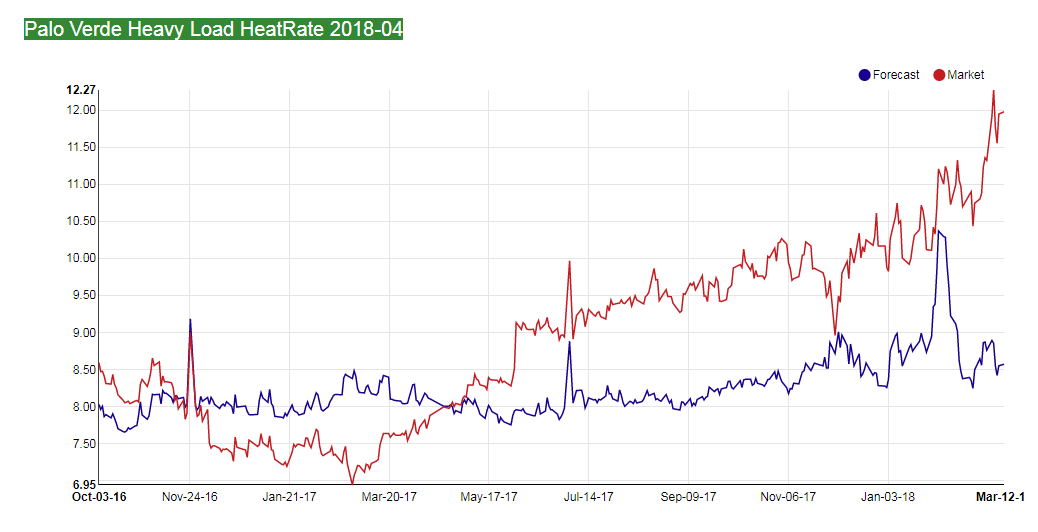 Palo, too, is beset with irrational exuberance over its prompt month. Why? What do we know today that we didn’t know a few weeks back? Nothing, except now you can short this for 2000 btus better. Pick your poison, illiquid PV or liquid SP; they are the same trade. 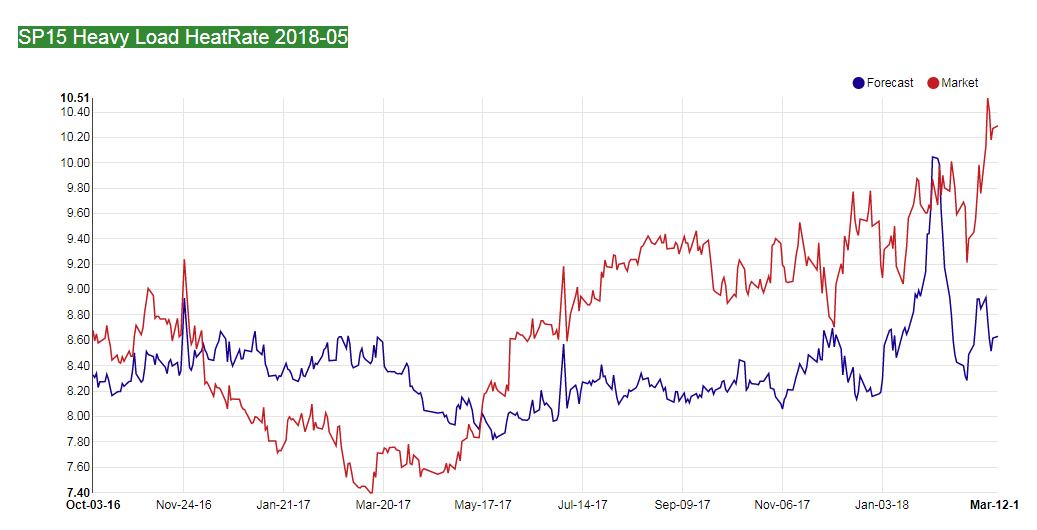 May SP, like April, just got a lot richer, for no reason. Maybe it’s the recent gas blowup, and perhaps the market fears this latest cold snap? It shouldn’t, lows will breach 50, and that’s about it. With growing snowpack, the ISO fundamentals grow bearish, not bullish. Pull the trigger? Why not, but the April and May are mostly the same trade – value will be earned if it warms up and all this recent snow comes down in a week or two. When that occurs is not known, except we know it won’t happen in the next two weeks which would bias us towards shorting the May over the April. 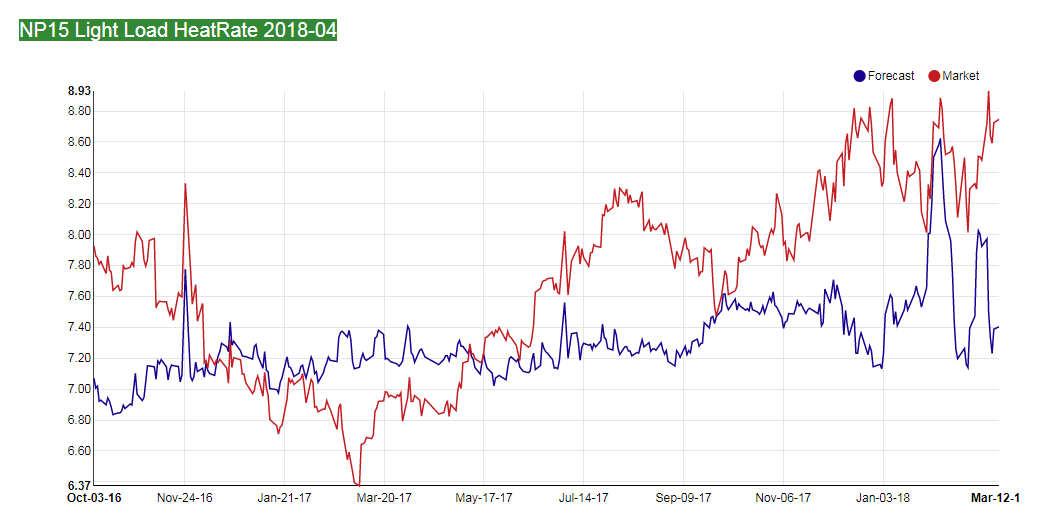 NP’s prompt LL is back to a contract high – each time it hit that it came off, only to rally back. It’s more bearish today than it was at any other time this winter. 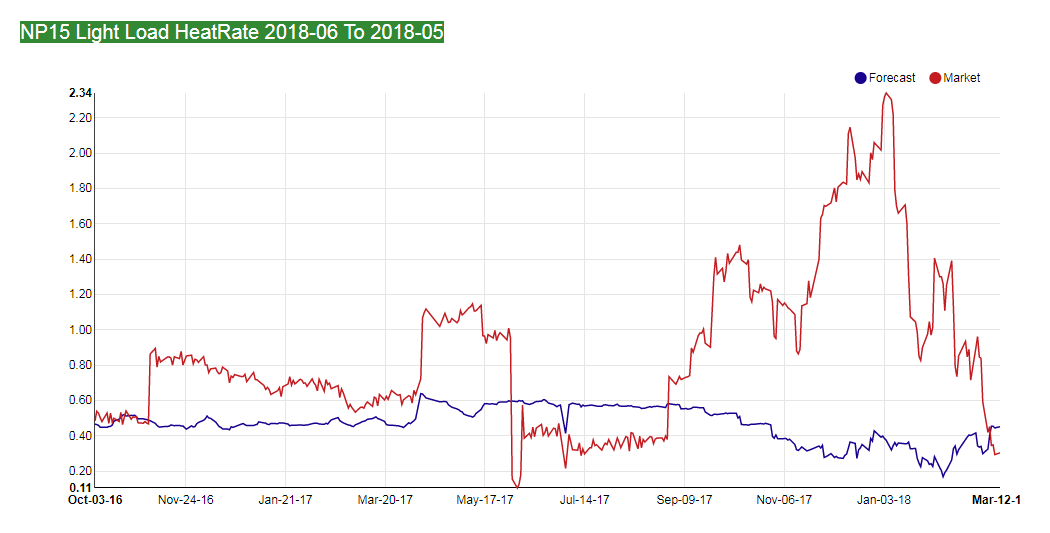 This is interesting, the June-May NP LL roll; now you can own it for next to $0.00 where but a few months back you had to pay 2k btu for that honor. Me, I’d buy this and bet the runoff takes place in April or May. 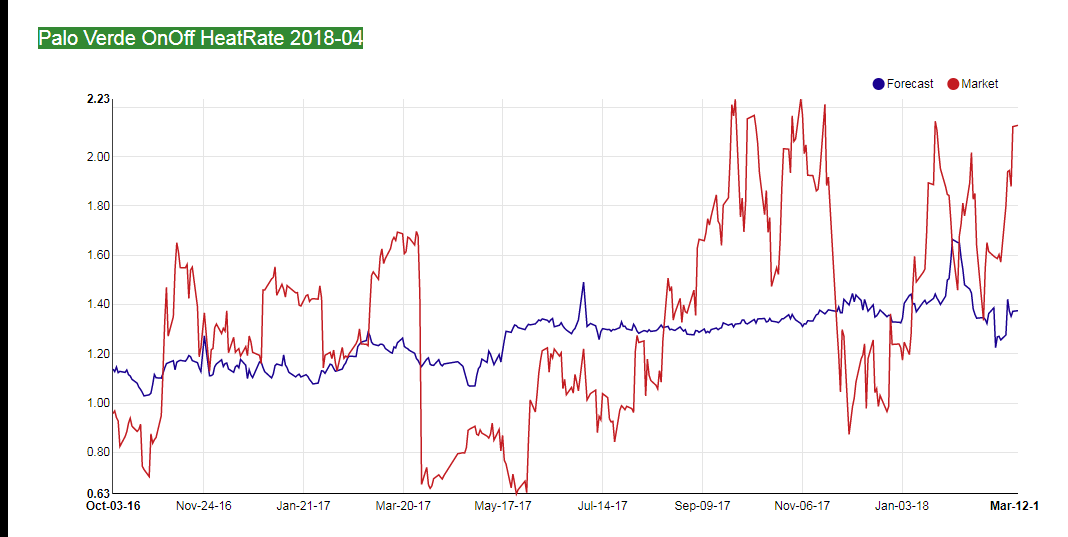 Palo’s April On|Off is back to a high; the hub has never been able to hold that level for long and doubt it does this time, either. 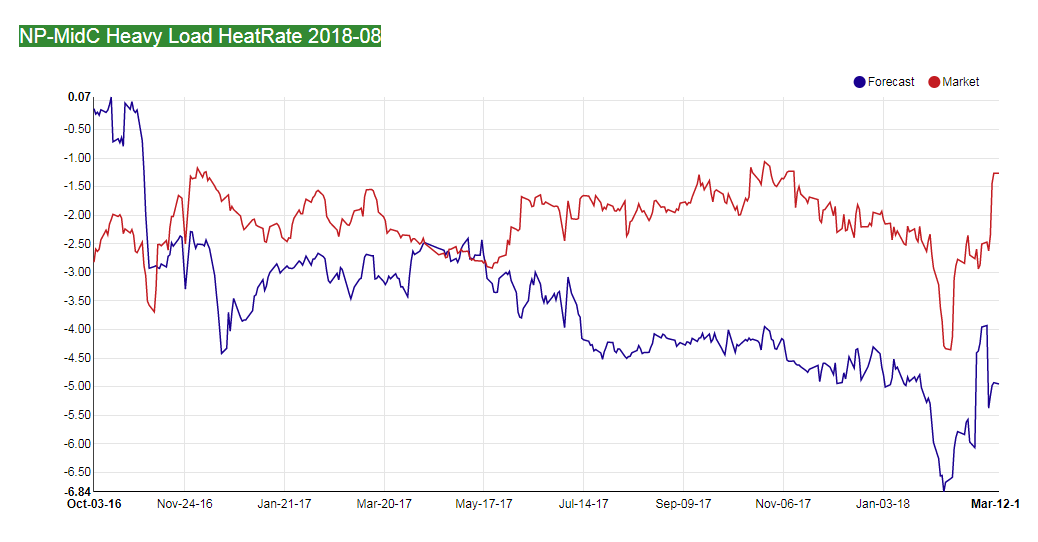 The market is taking a shining to the Aug NP-MIdC spread, and we don’t disagree. Every cold day in the Northwest just jams more water into June-August. And even though NP sees its snow grow, there isn’t a “snowball’s chance in Hades” that any of that snow is still there by July. The Northwest, though, will see a substantial July runoff that could spill into August. 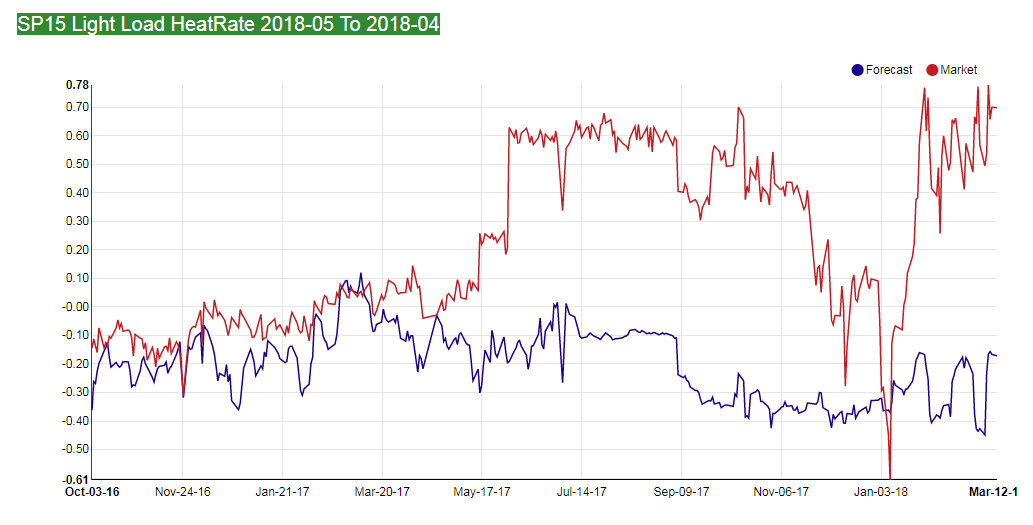 The roll of SP LL, May|April, is rich and probably overpriced, though the ultimate value will be set by degree days. Cold CA defers melt, but it’s just March so hard to make the call when the growing snow begins shrinking. There are better plays, pass. 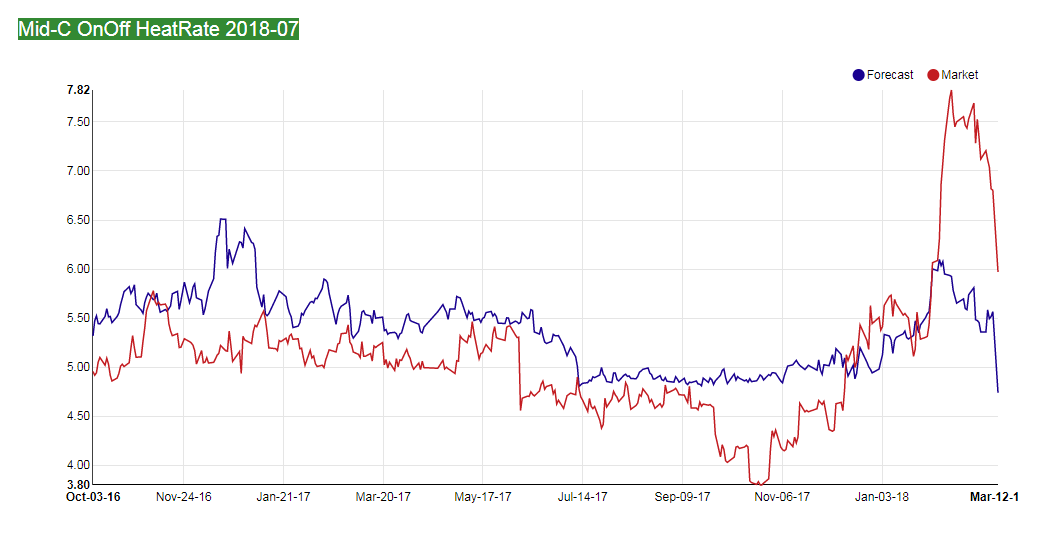 We talked about this, the ridiculous HL premium at MidC in July; now the market addressed its blunder, and this is more reasonably priced than not. It might even be a buy; you get the relatively free call option on massive WECC heat.

With the Northwest reverting to cold and maintaining its dry, and flood control locked in, let’s see what mess Mr. Market made of things. 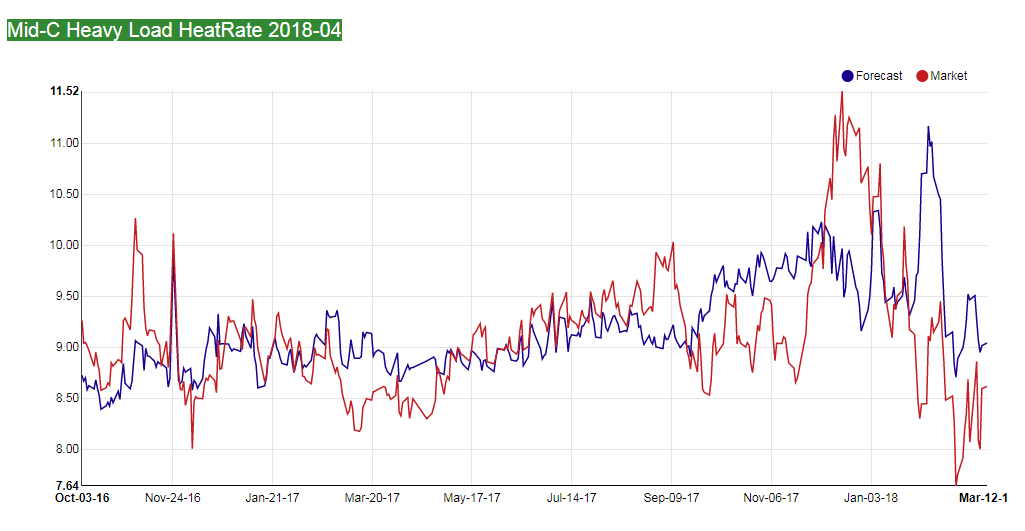 We sent out our buy signals at contract low, the market rallied a bit but is still cheap. We’d own this off of the rapid pre-mature draft, cold weather, dry weather, and it is kind of cheap. Toss in the start of the fish spill in early April, and you have the makings of a possible surprise. 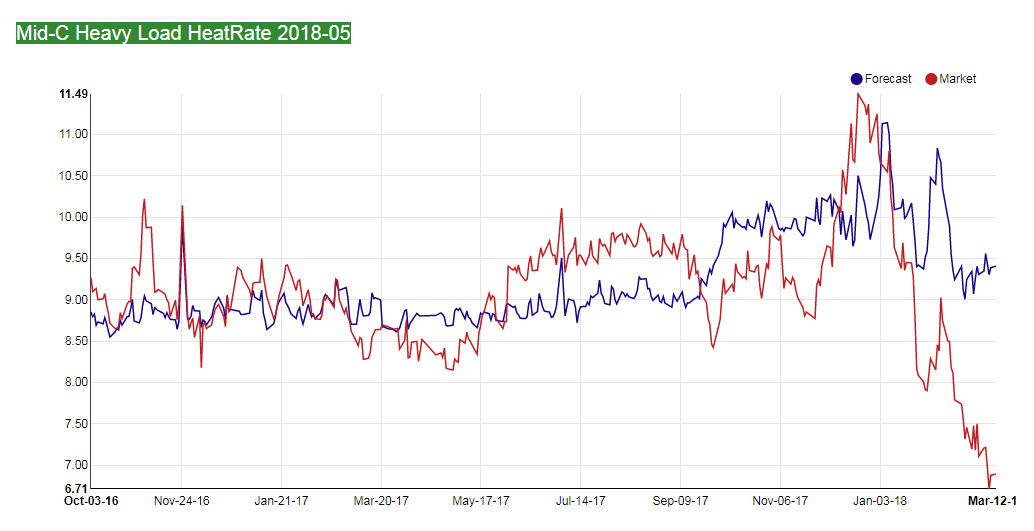 Oooh, you really hate May, don’t you? Why? The Northwest is dryer than it was three weeks ago, the region is mired in a cold streak, and the draft is a bit deeper than it was a month ago. If anything, May just got more bullish. We’d be big buyers of this and just watch temperatures. If Kalispell hits 70, puke, if the trend continues, keep buying till this gets back to north of 7k heat rate. Hey, you think BPA will not keep gas on the margin? They might have the opposite problem – no natural river flows but tied to refill targets. 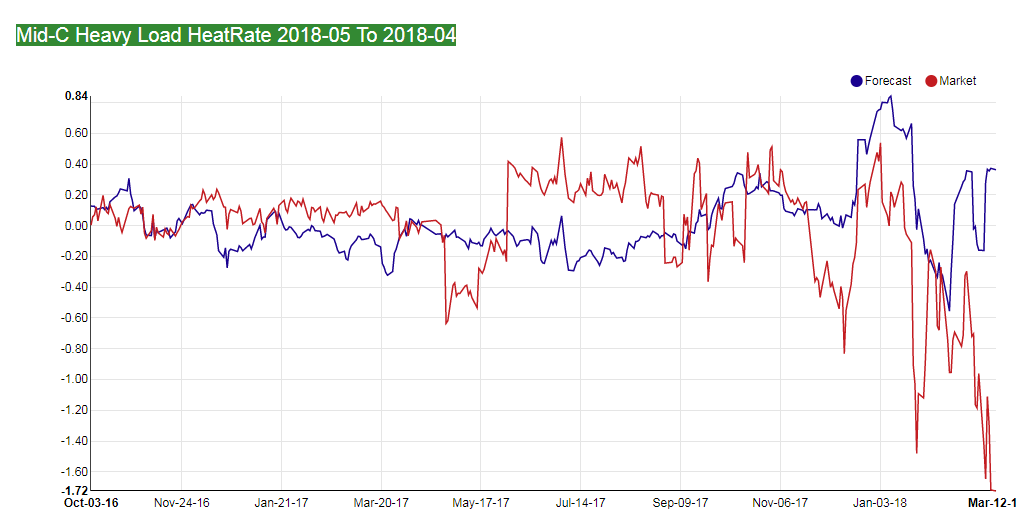 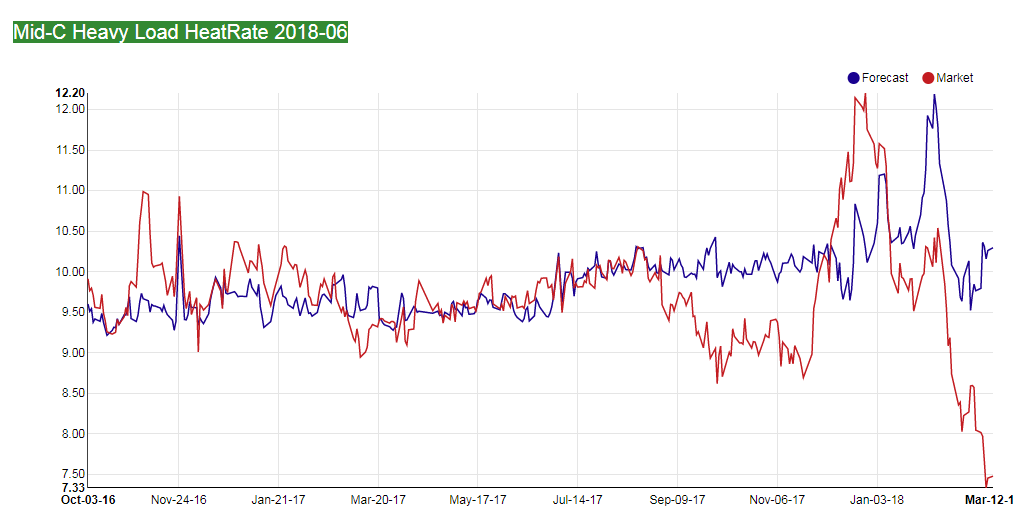 June is a battered strip, and now its attractive from the buy-side. Not because there won’t be a massive June runoff, but because if April and/or May are bullish, June will go up in sympathy. 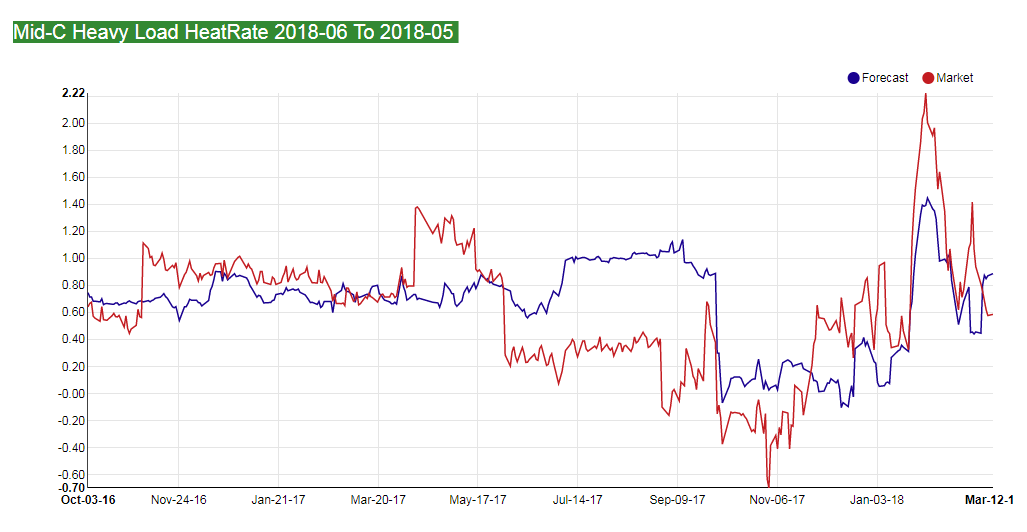 We always liked owning May over June, especially when the market gave you a free look; it’s not free any longer, if anything its value, or close to it, but we’d still be biased towards May over June because we only know its cold now and nearer-term is more elastic to cash than further-term. 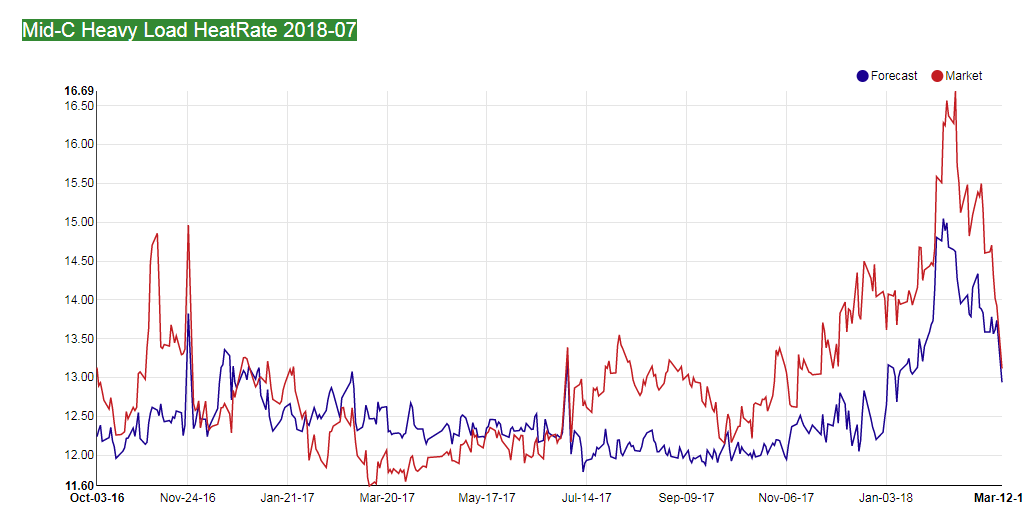 This was such an easy short a few weeks back, now its a head-scratcher – Long or Short? I’d be more biased towards owning it at these levels, but falling knives have a tendency to cut deep. Maybe just let this play out, crash some more, than jump in? 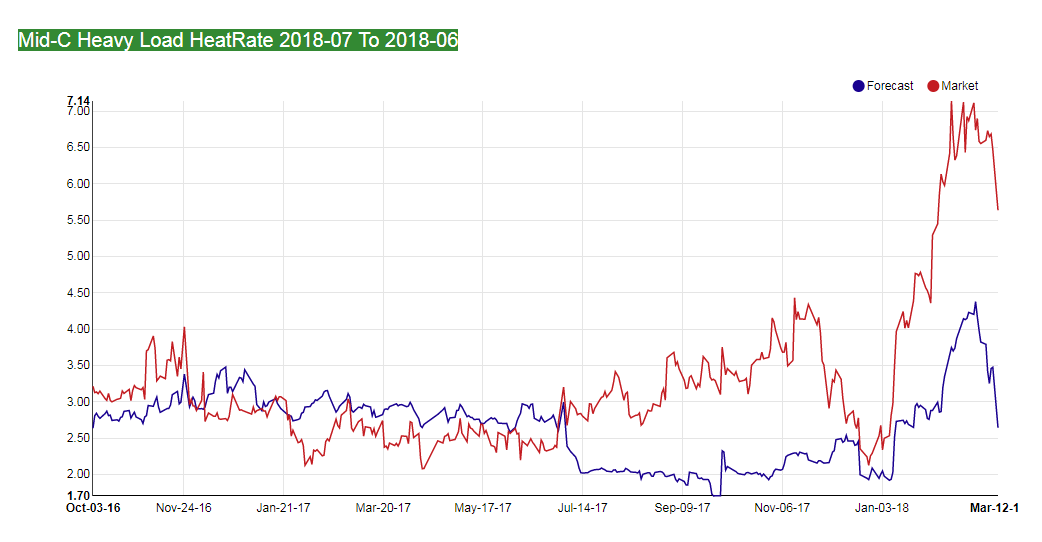 The roll is coming off, but we suspect there is further room to fall. Cold March is bearish July (and June) but more bearish for July than June because more water is deferred to the former. At these levels, we’d probably short this. 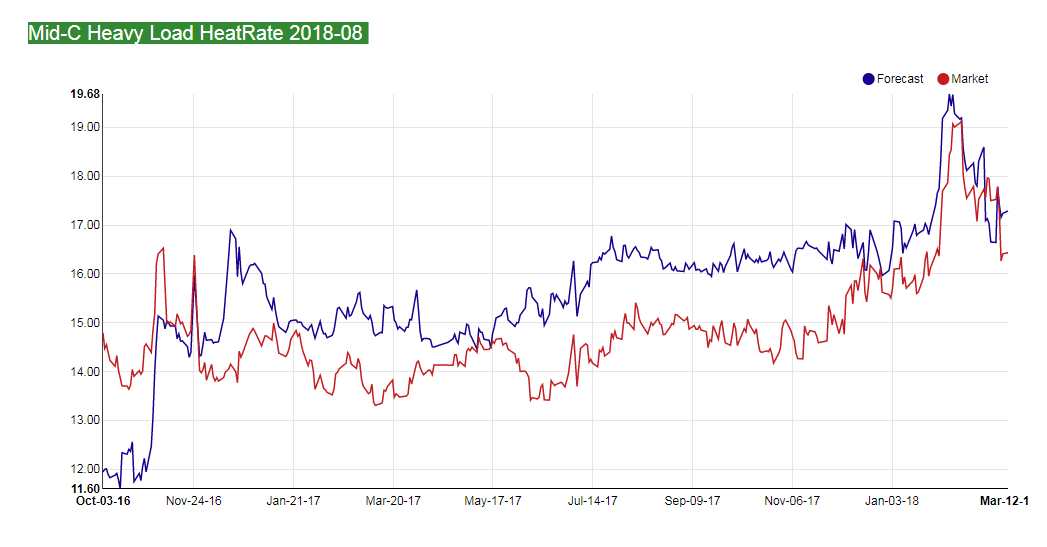 We’d do nothing here, it is reasonably priced and a waste of mental energy and VAR. 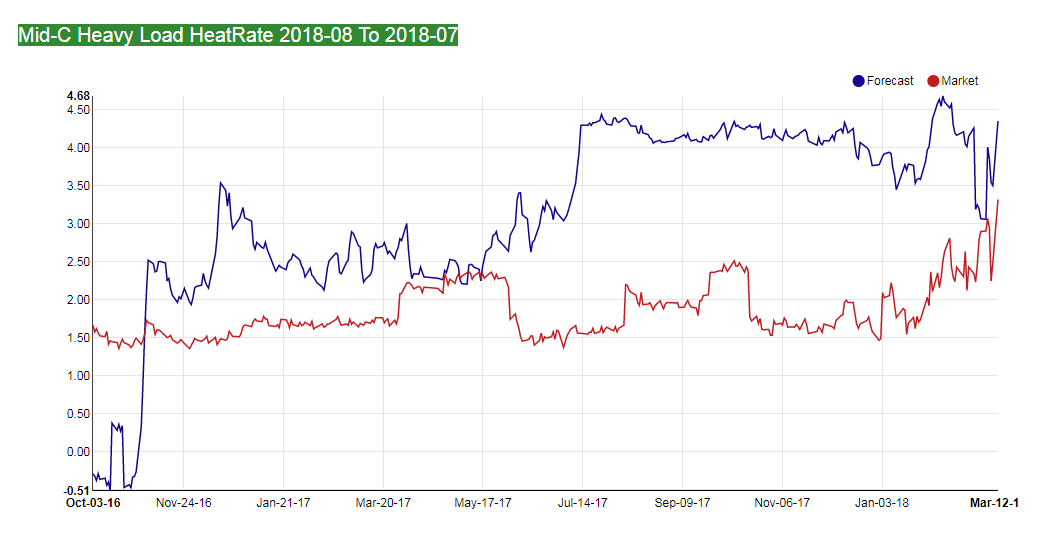 The market is creeping up in the Aug-Jul roll and is just fairly priced, and we’d pass for the same reasons as the Aug outright.