I’m at Whistler attending the WSPP meeting. Last night I listened to a spirited debate between Peak, PJM, SPP, and the ISO on the relative benefits of their respective systems. All of the discussion was over the five-minute imbalance market. That is fine, but I felt like the participants were arguing over what color of mittens to put on while an epic avalanche of change is about to wipe out their village, regardless of the mitten color. Perhaps being an ex-term trader I find it hard to get excited or care, about a five-minute imbalance market, but clearly, I was in the minority, the rest of the audience obsessed with it.

And on to the markets. 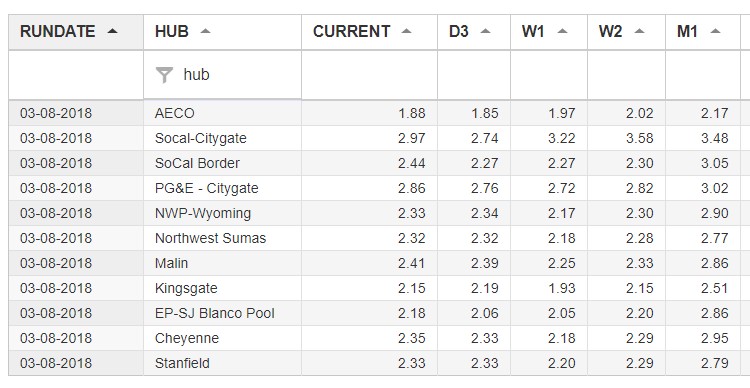 California warmed up, and the spot gas markets tanked, especially at Socal Border; there is now a $0.50 spread between Border and Citygate; the other hubs saw a slight bump.

LMPs slipped from last week, SP having a more significant drop than any other point. The lack of congestion everywhere is noteworthy. 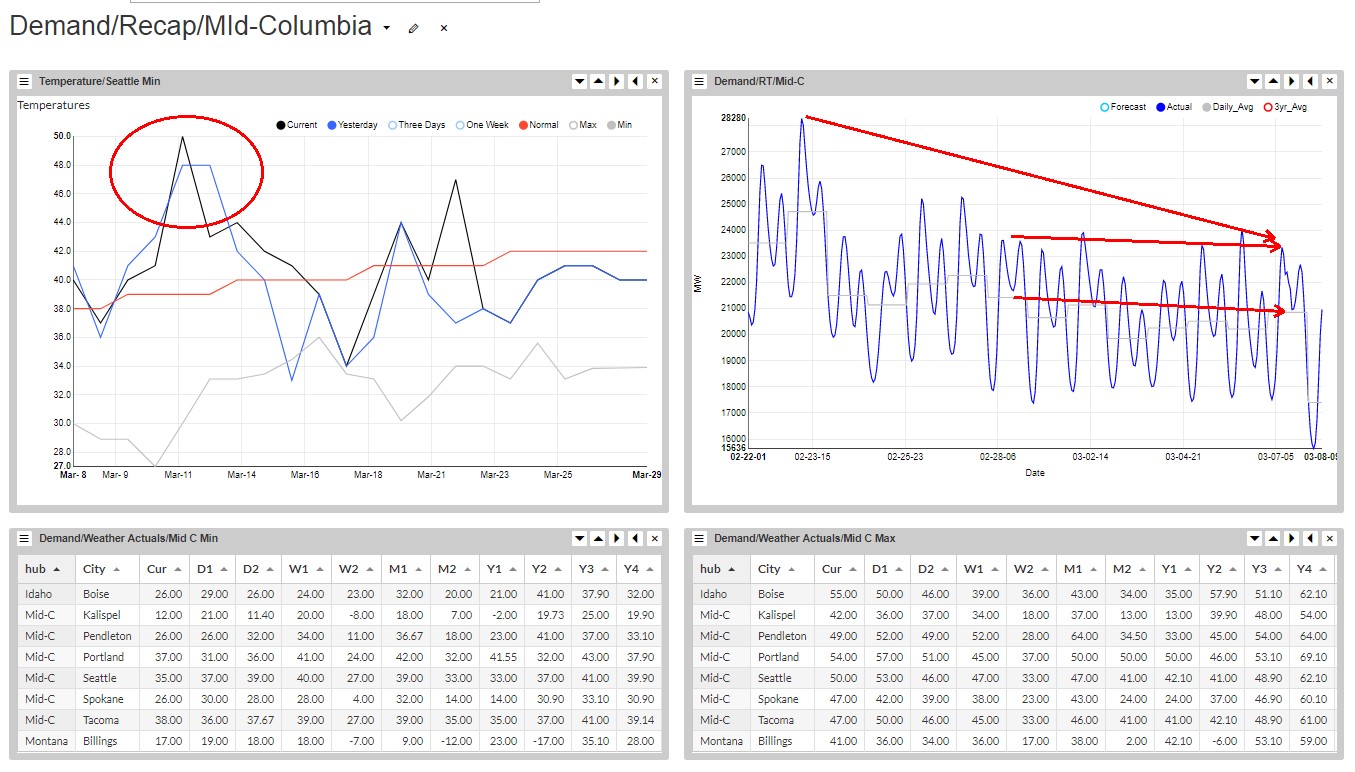 Seattle warms up next week then reverts to normal. There are no “hot” days in the foreseeable future which will keep the snow from rapidly melting. This is more bullish than bearish for BOM and Prompt.

Loads at NP have fallen off of rising temperatures; next week grows colder, but not cold, it is just too late in the season to get real cold, note the number of upward ticks on the “Average Line.” One would think “Siberian” when you look at NOAA’s 8-14 day: 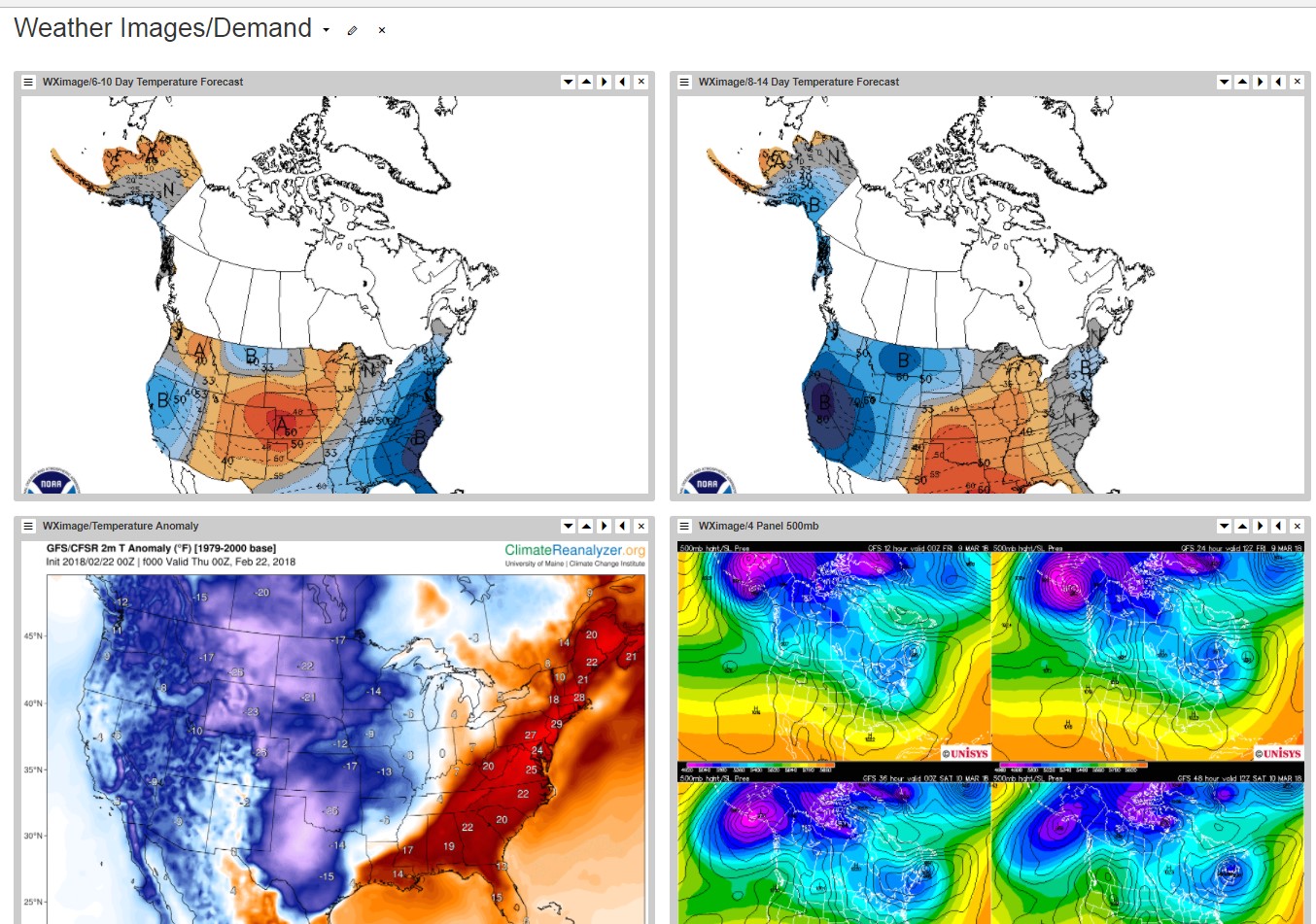 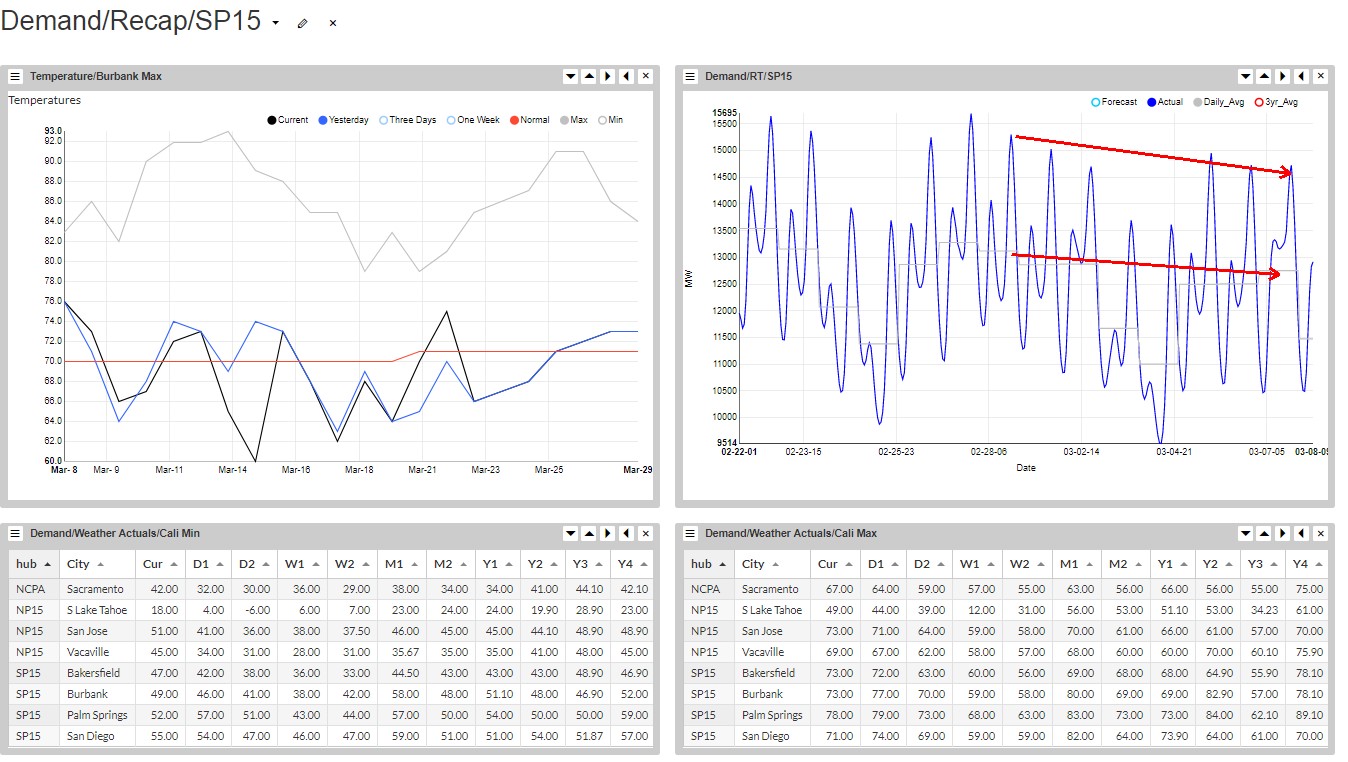 Loads are off less at SP because they went up less and the LA Basin will remain below average, but not “cold.” 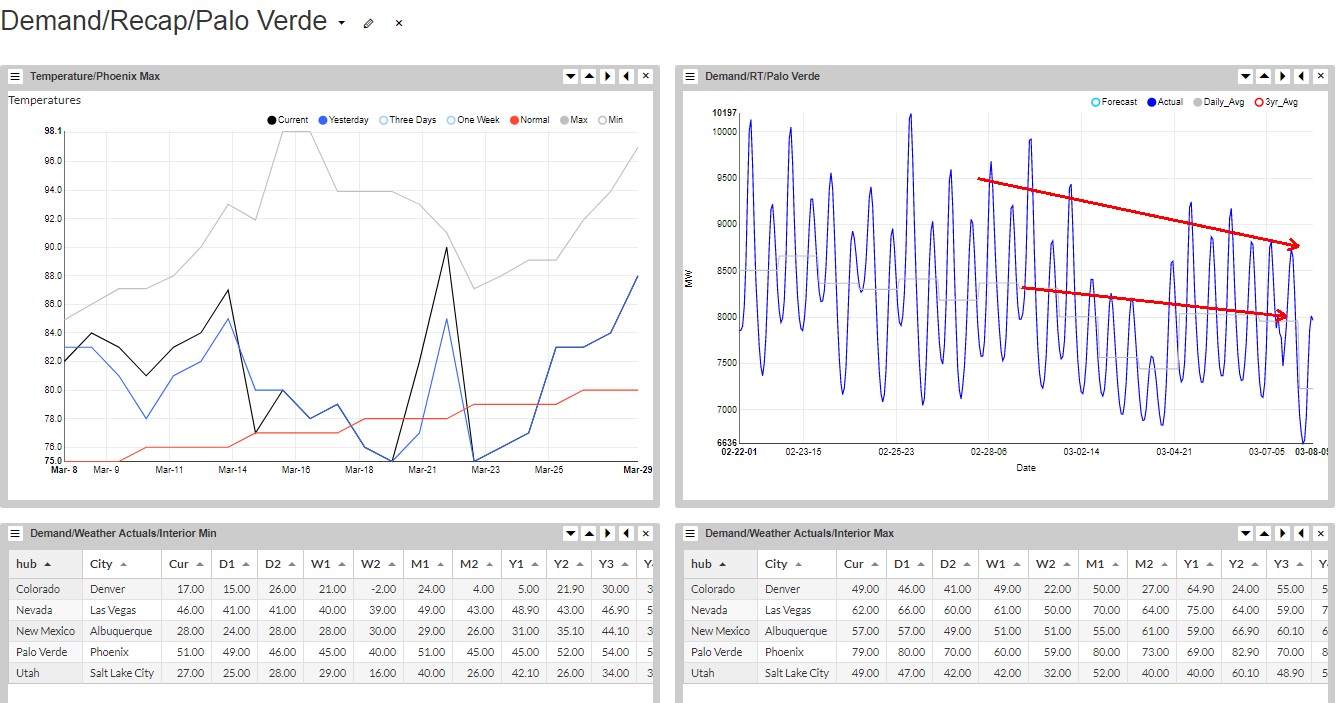 Phoenix enjoys a week of above normal, but not hot enough to drive loads up much; then it cools down. Note how many Climo bumps in the redline. 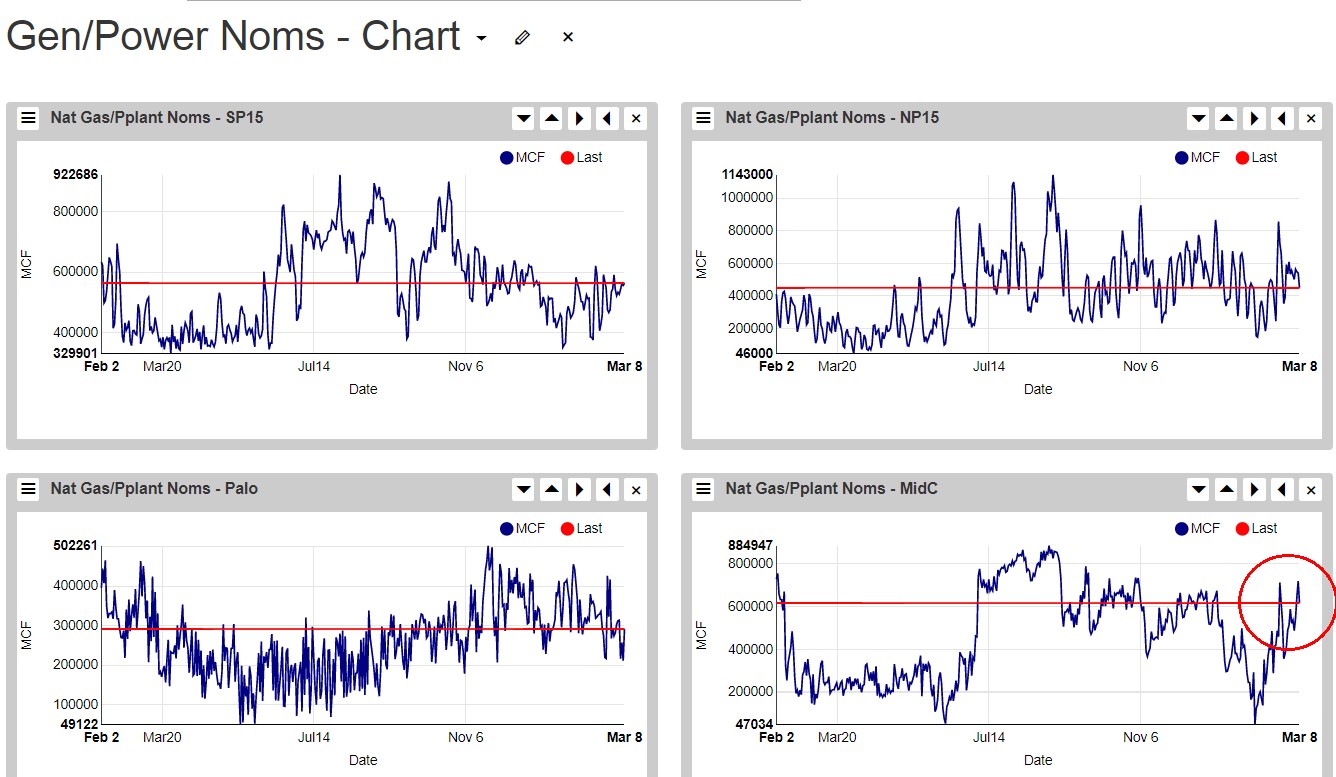 ISO noms are pathetically weak, but the MidC’s have come roaring back to near Winter Highs and its not even cold! Call it hydro, that fundy has grown ever more bullish as the region grows ever drier and doesn’t warm up enough to trigger a strong melt. 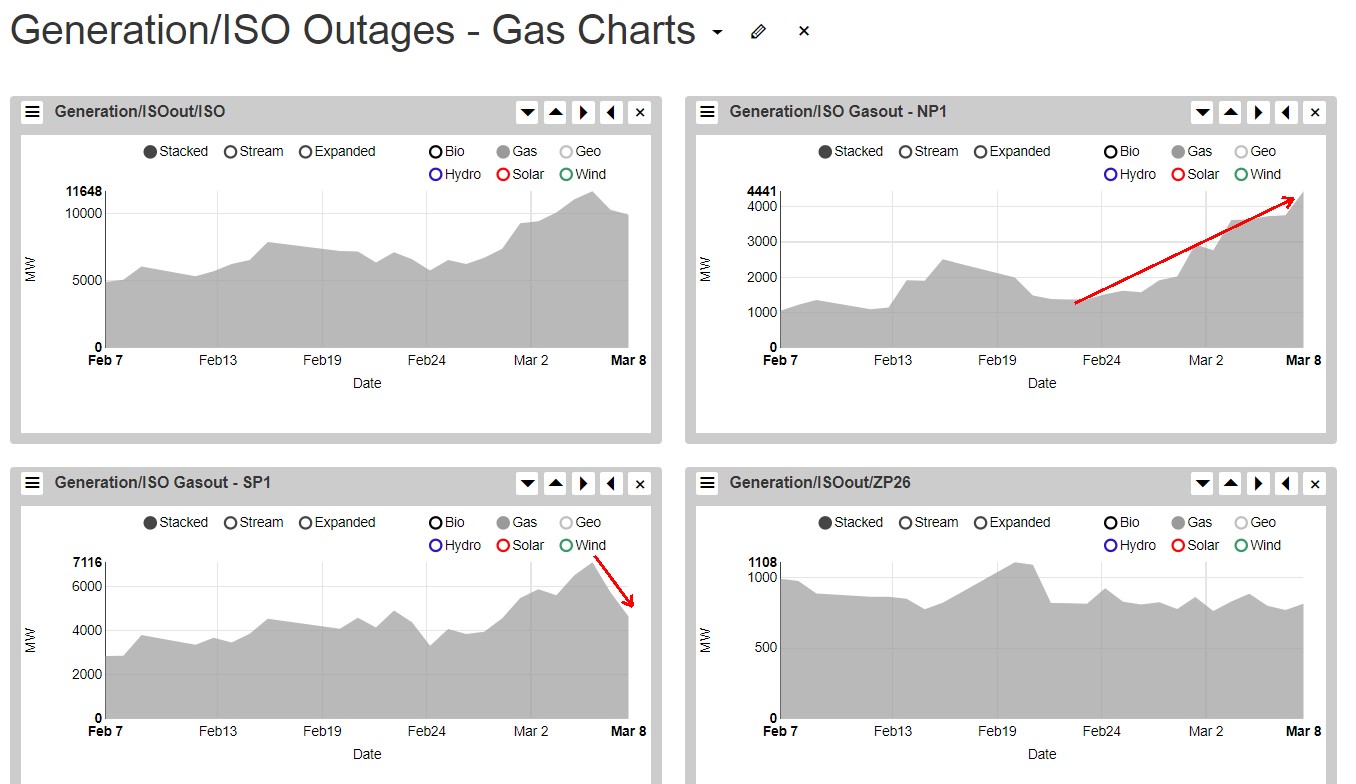 NP has seen a 3000 MW rally in gas units taken offline while SP has seen about 3000 MW of capacity return.

The Corps is expected to release its March Flood Control data today, but it’s not posted as of this writing. We expect a deeper draft, but that draft is becoming ever mooter:

This table summarizes the Mid-March reservoir targets and returns the most recent elevations, as of March 8. Almost every project has drafted well beyond its target suggesting less late March and Aprill drafts. Take Coulee, as a case in point:

The reservoir is now at 1256, leaving just 20′ to meet the Feb targets; so if the new draft is into the 1220s, that is just 30′ over the next 50 days. Again, it’s becoming increasingly moot. Moot as long as temperatures stay normal or cold. Note the 20kcfs cut in discharge at Coulee despite the 10′ of draft over the last week. Maybe BPA will slow the draft down now that they reached their drum gate target?

Some of that dearth of water is from the cuts at Arrow, down 20kcfs. The big question is what does this mean for the market? Let’s look at the STP for answers or clues. 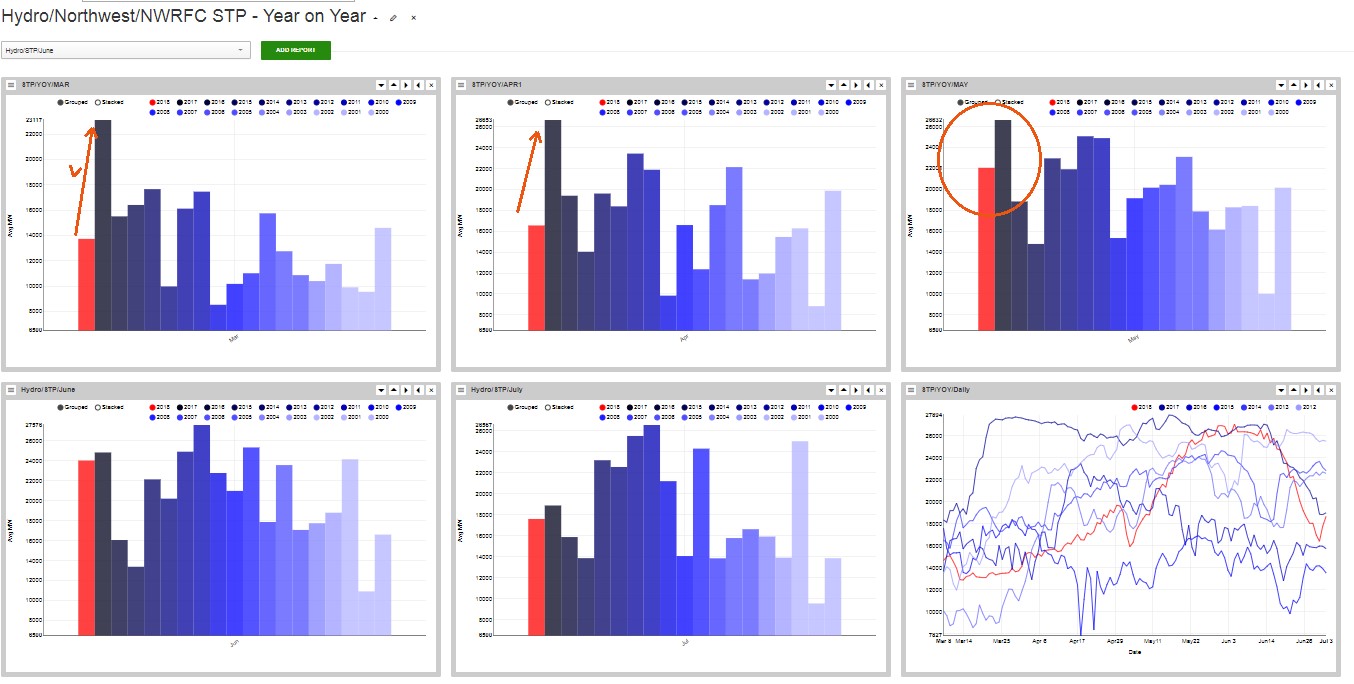 This collection of plots shows the current forecast (RED) measured in energy equivalents (MW) as compared to prior years. We know last year was huge in March and April, this year, despite massive snow above Coulee, is several 1000 MWs lower for both those months. Even May is about 3000 MW lower while June is about the same. Something is wrong here, there is more snow in 2018 than nearly any of those years, yet June is about average. Don’t bother with July, there are only two days in that forecast, but we’d expect July 2018 to be the highest once they post more days. In sum, we think June is light and maybe May, but that latter month’s total energy will be driven by cooling degree days; if there are few, it may be over-stated. June, however, needs more energy, especially if it stays cold.

The Northwest remains in a relatively dry stretch, the stations above Coulee are about 40% of normal. Meanwhile, California is at normal:

It seems the Golden State has realized a weather reversal, now it’s getting a fair amount of precip. 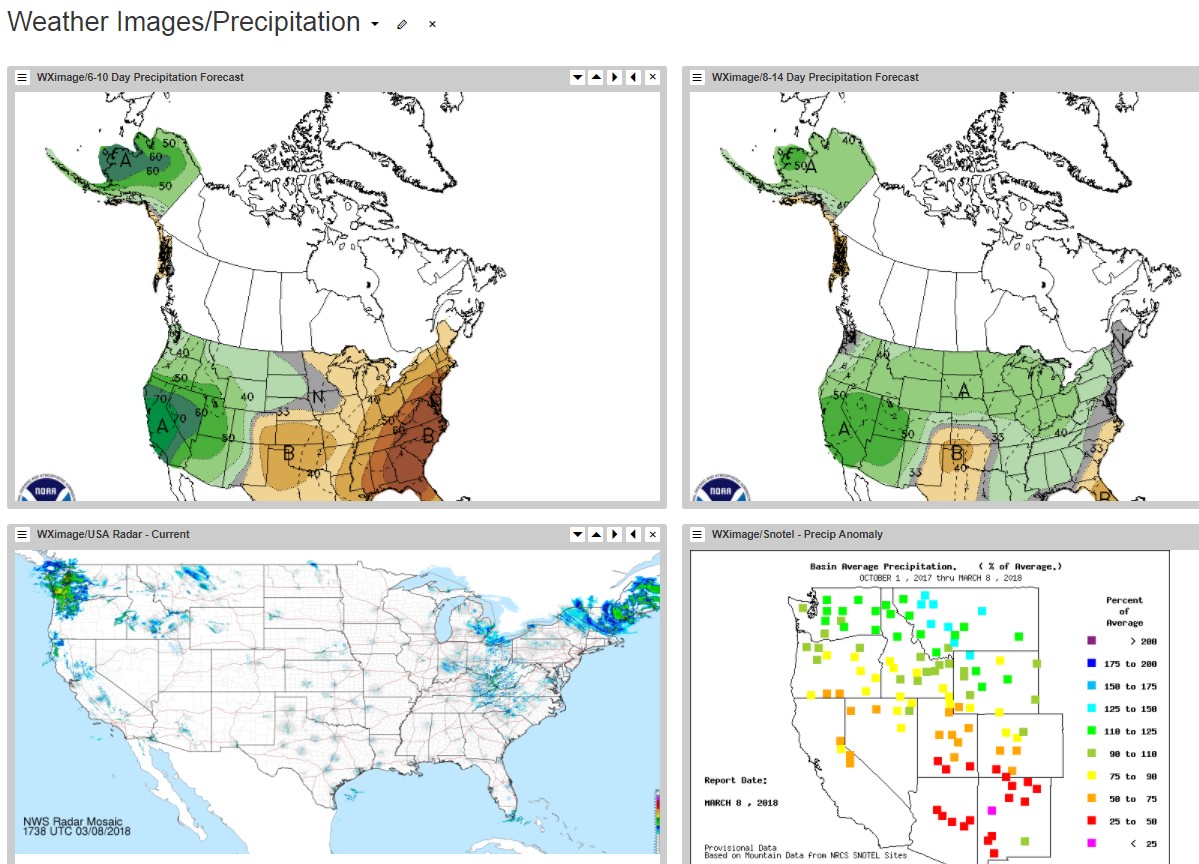 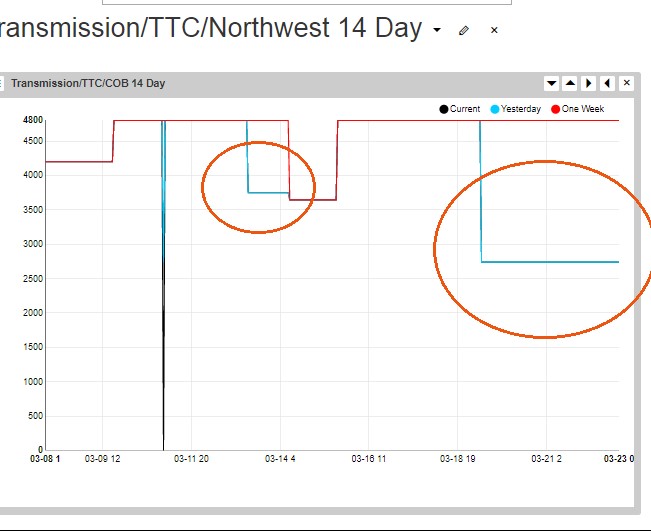 BPA has added a couple of new outages on the AC: 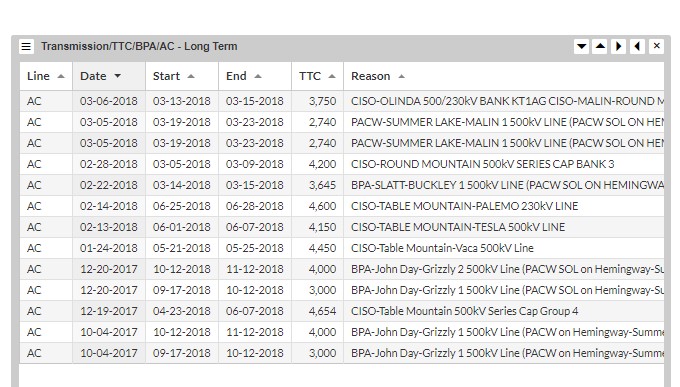 Both are short-term but bearish for MidC and bullish for NP. 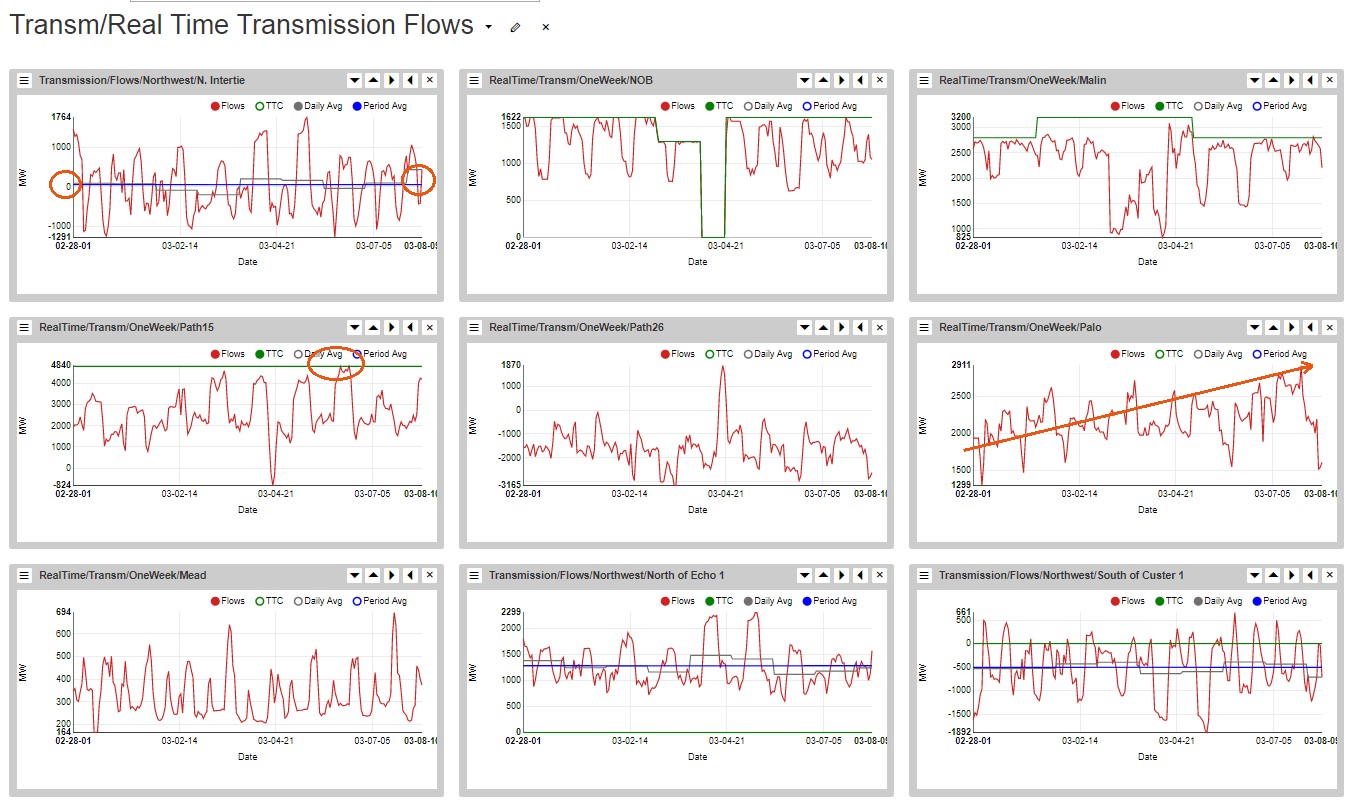 Net flows on the Northern Intertie are about zero; Path 15 hit TTC a few times; flows from Palo into SP are increasing.

Surprisingly, the Northwest is bullish off of cool and dry weather both of which are cutting into natural river flows. The drafts are strong, but without melt, the targets are increasingly easy to reach. All of this just pushes the ultimate bearishness into June-July, maybe May if it warms up.

California isn’t as dry as it was three weeks ago, and if the pattern persists for a few more weeks, the state will realize a decent runoff and April, May, or June will see an additional 2000 aMW of hydro energy.