The cold lingers in Socal, is mostly gone in the Northwest, and Palo shows hints of AC loads. Spot gas has returned to earth in an unsoft landing and next week is the March Flood Control.

A closer zoom illuminates the massive congestion on the solar hours, though not so much at NP and COB.

Despite Socal still relatively tight, demand-wise, the spot spread has flipped to PG&E premium; the rest of the west points are mired in the low 2s. 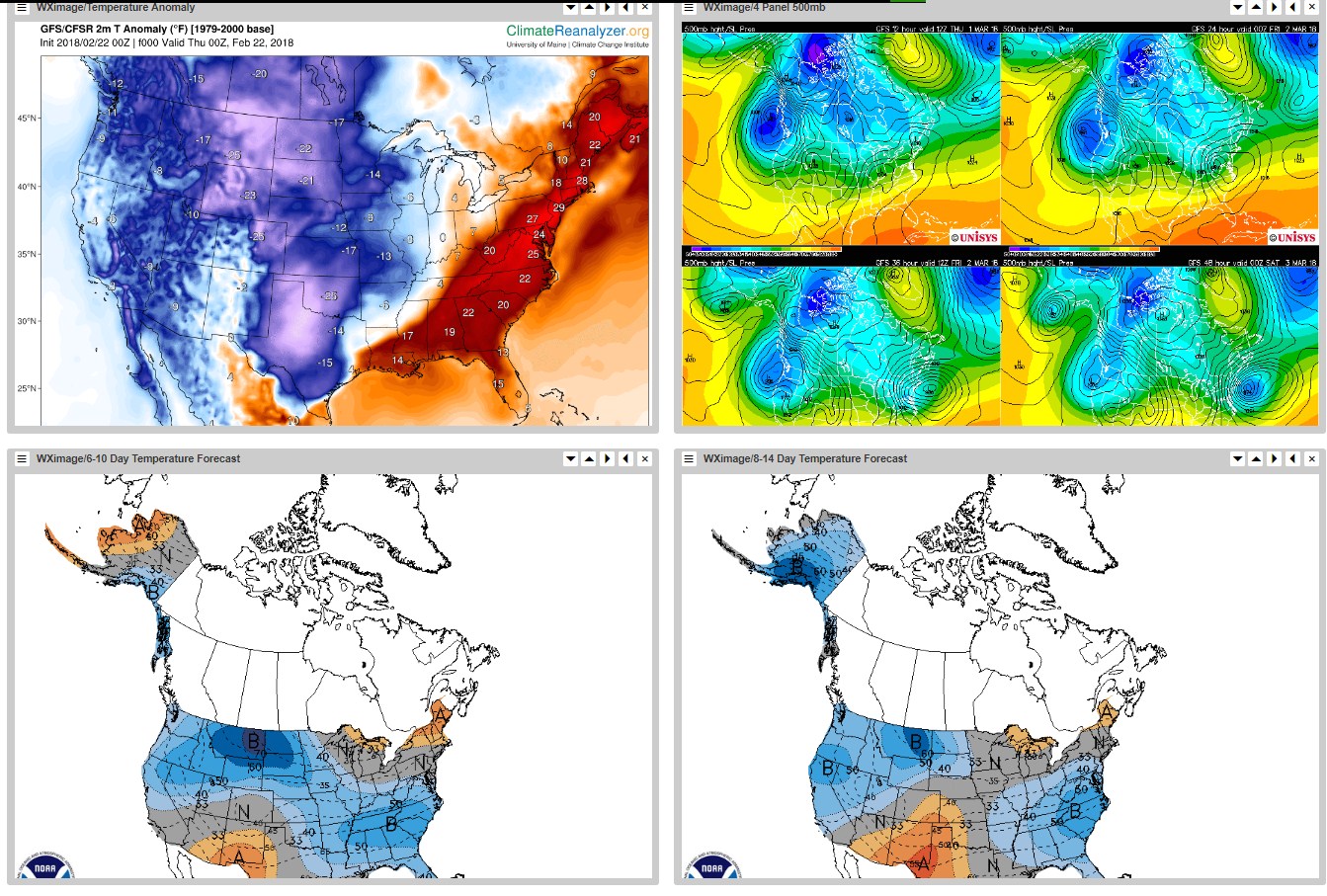 Where we’ve seen dark blue in NOAA’s 6-10, now we see powder blue, but not orange or red in California; this is just a neutral forecast. 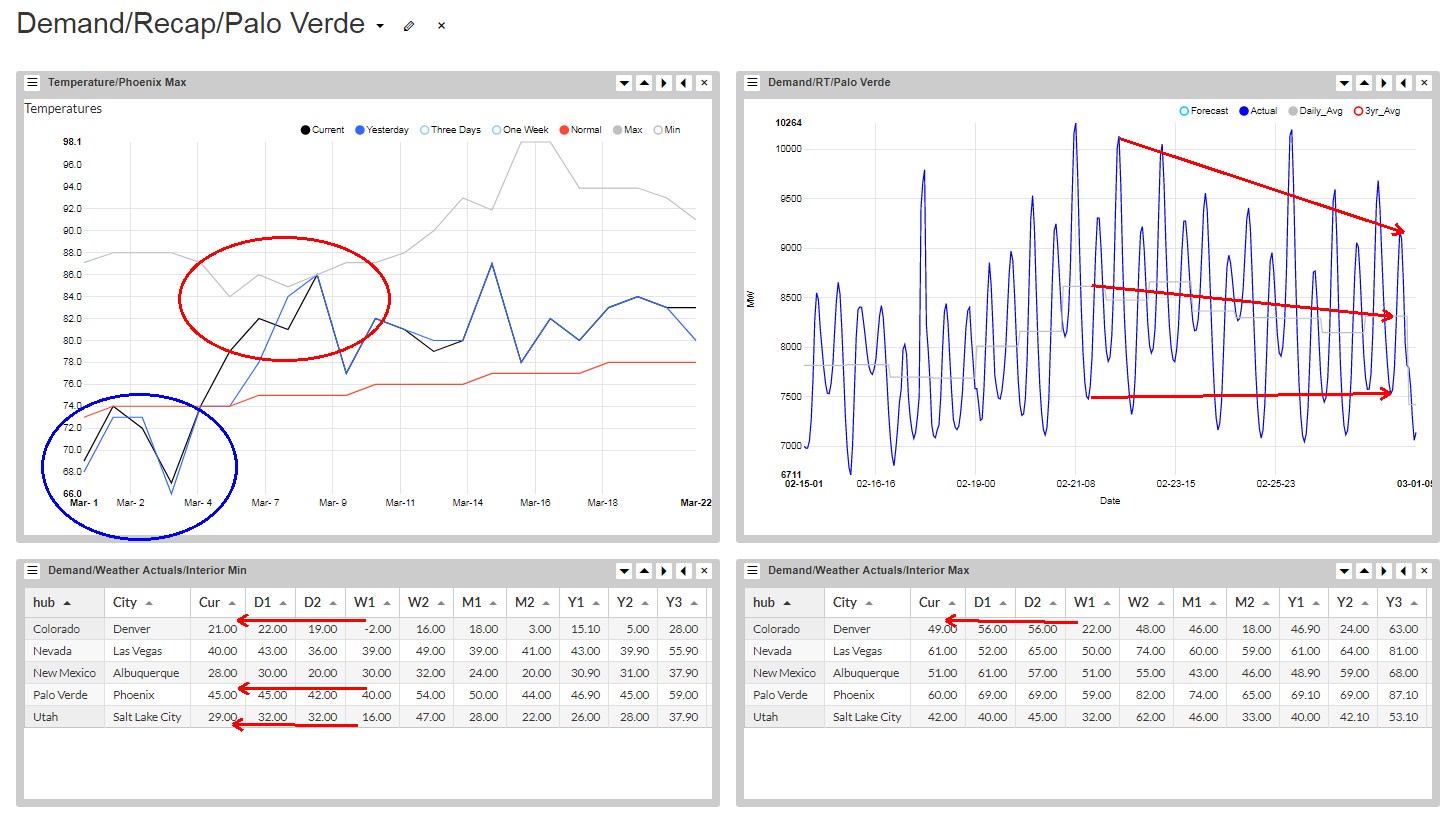 Palo’s loads are off hard, week-on-week, but the forecasts show hints of heat, even approaching ten-year highs next week. 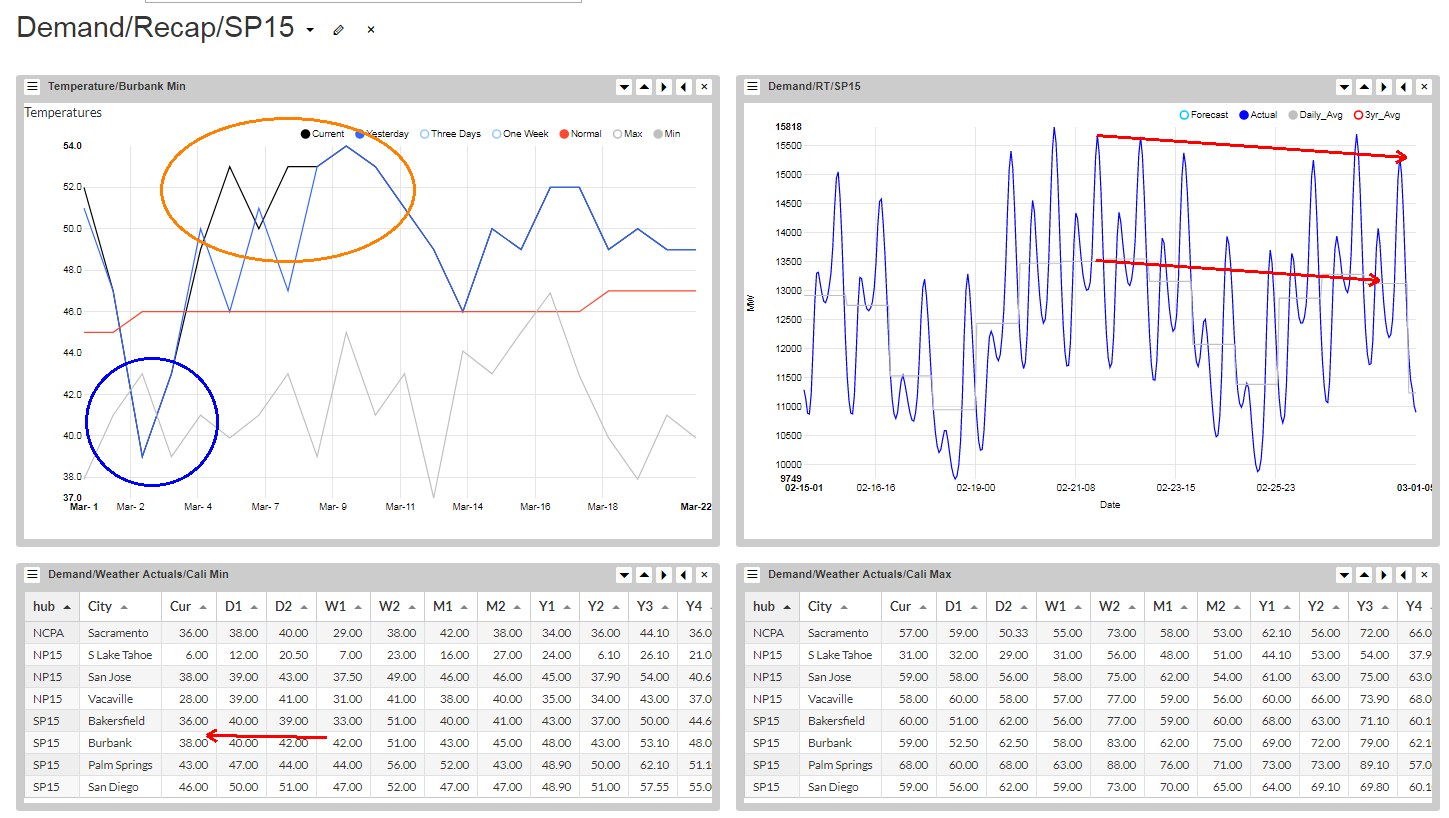 SP’s loads are off slightly, but they were never up, to begin with.  It seems LA has one more “blast of cold” before the basin moves into positive anomalies for the rest of the forecast. 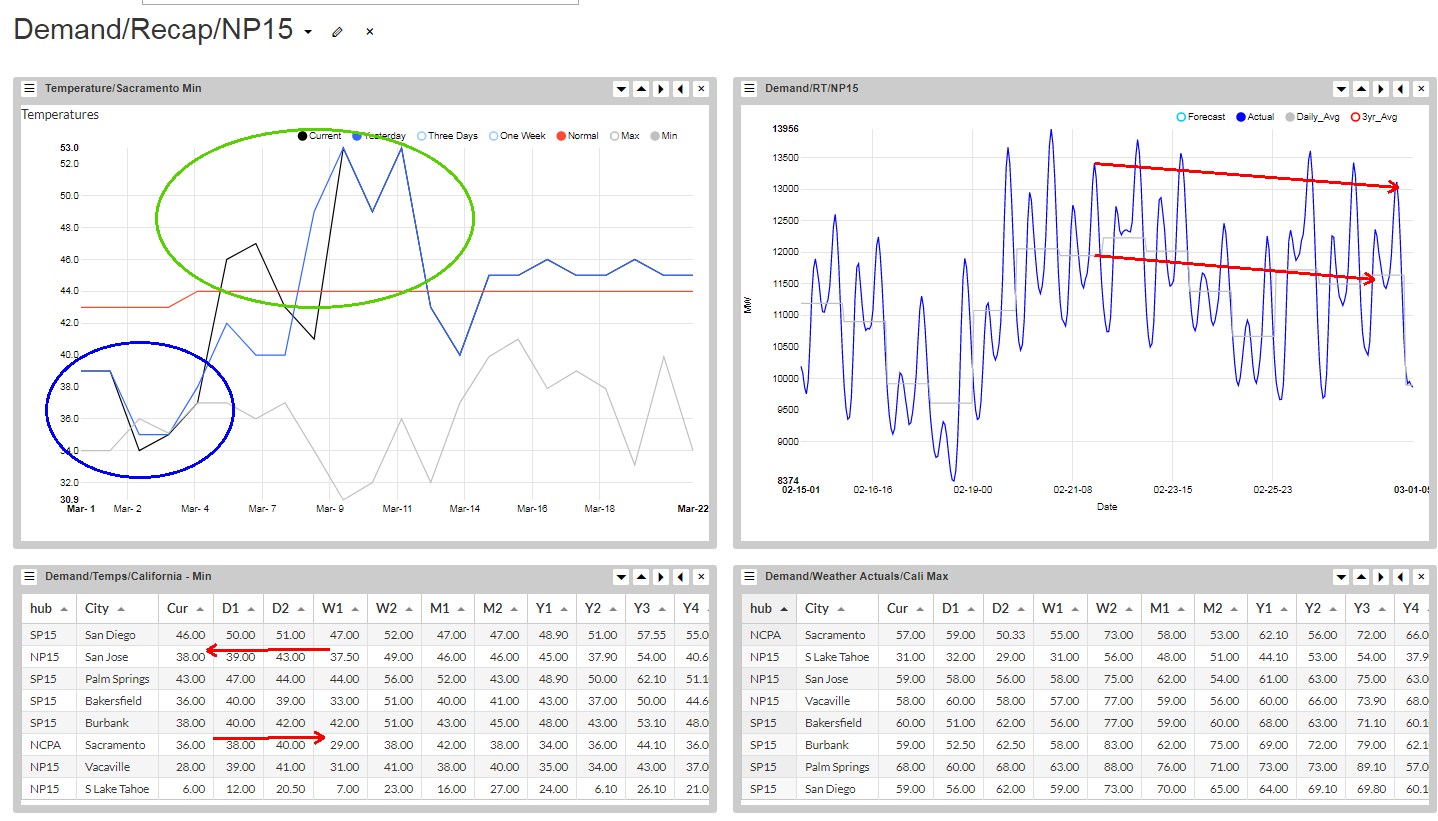 NP’s loads are off harder than SP’s, and the hub will see a few more days of below average, then, next week, things get warm and bearish. 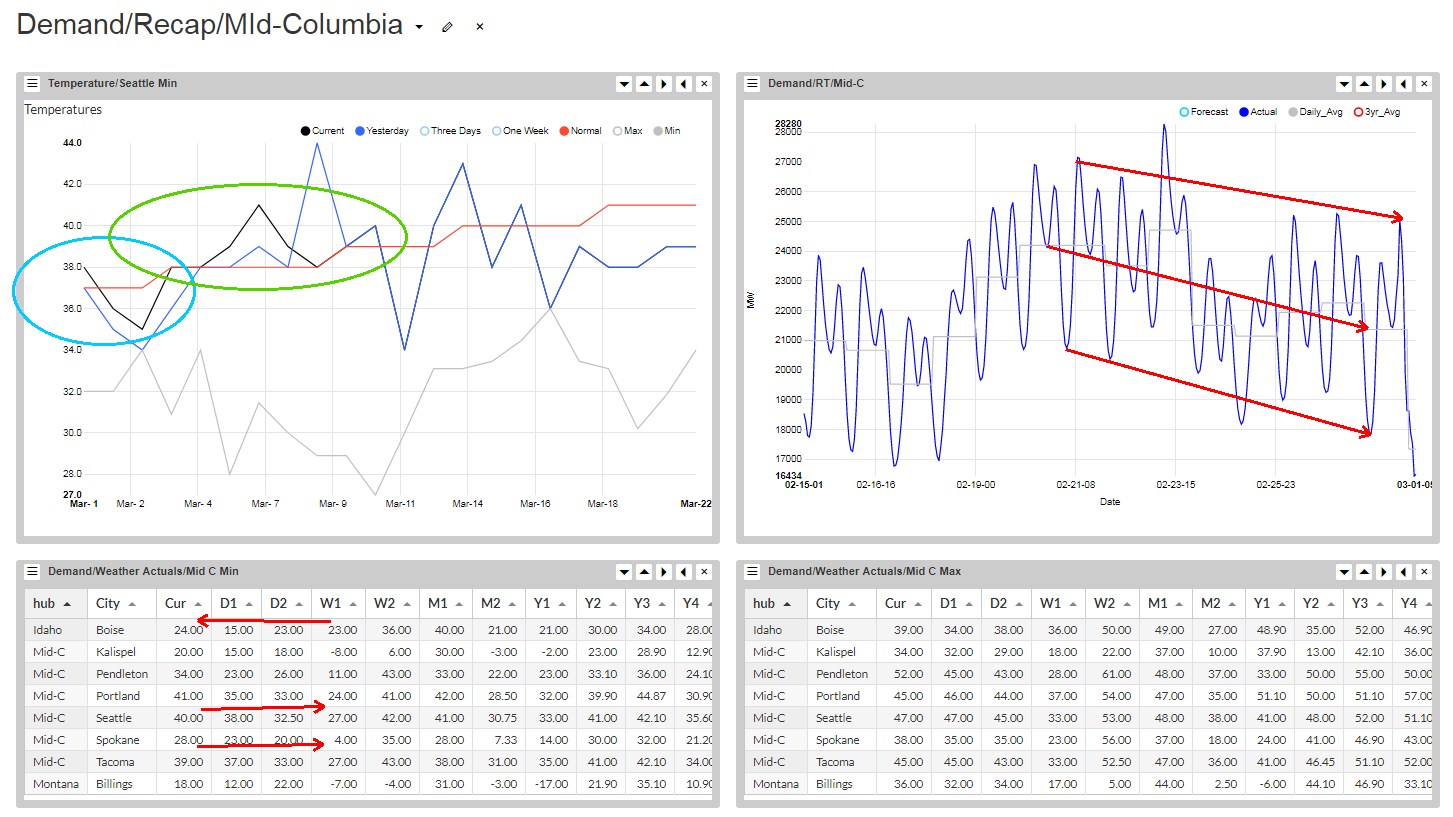 The Northwest realized the sharpest decays in loads, but it’s a winter-peaking zone and saw the sharpest increases in temperatures. Weather inches up, slightly warmer, but remains just normal. 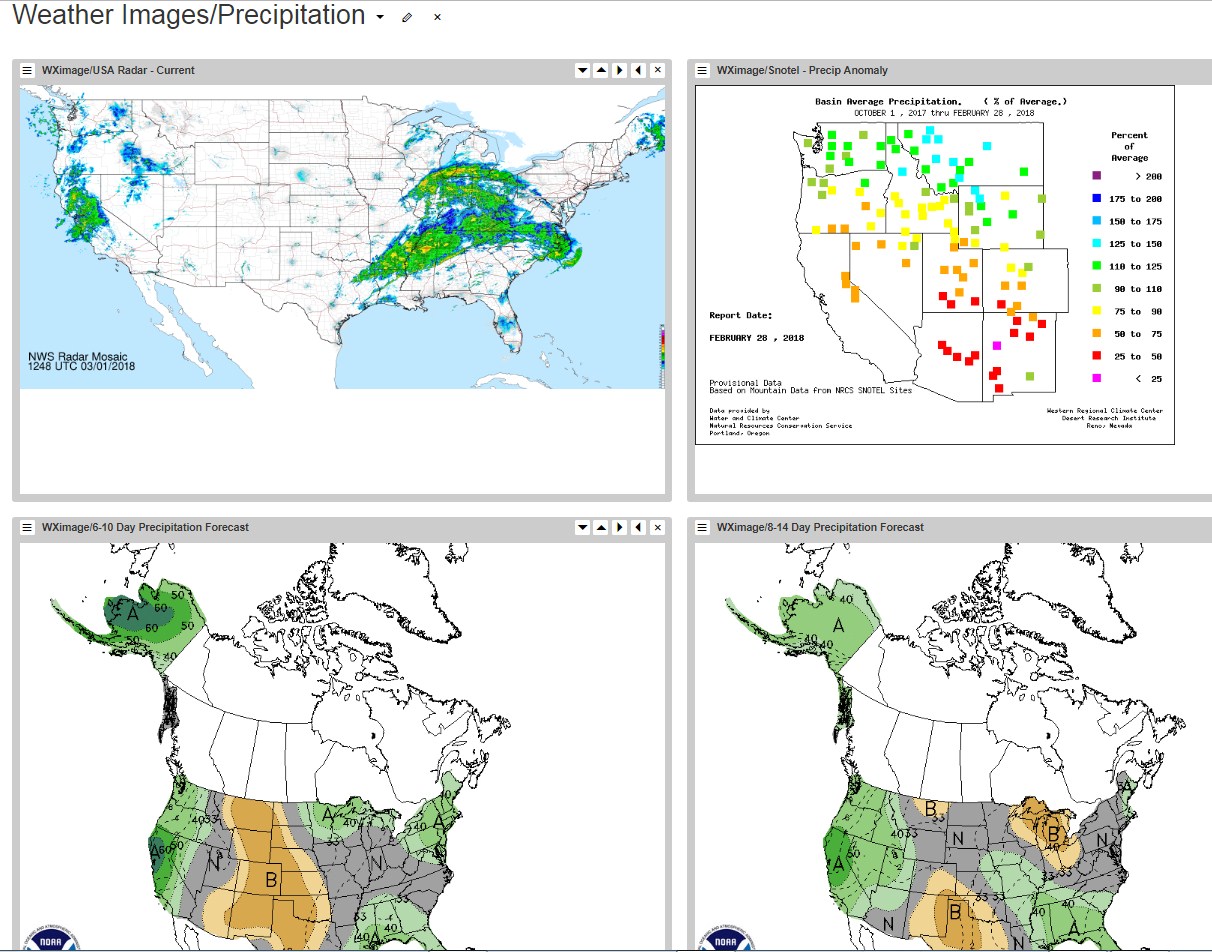 Both the Northwest and California are expected to get slightly above average precip for the 6-10 day, though the station level data doesn’t support that forecast in the Northwest. The storm is already pounding California; maybe some mudslides will garner the state some national news.

Lake Tahoe is set to get its biggest dump of the year, today — then nothing. Rivers will surge for a few days, then back to ten-year lows. Too little too late to rescue WY18 for the Golden State. 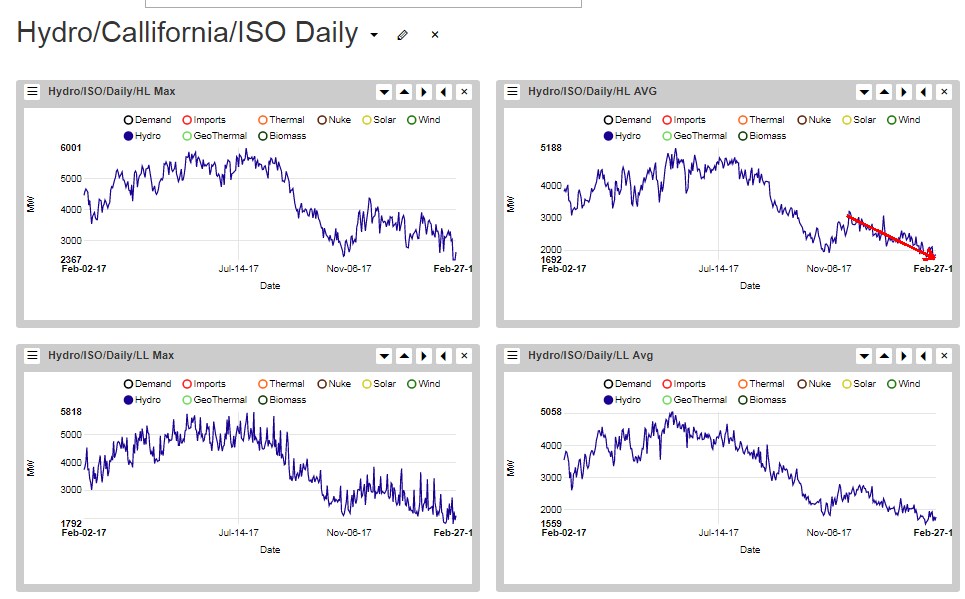 Actual hydro energy production continues to slide, though we should see a slight pop from today’s storm, then back to slip-sliding away. 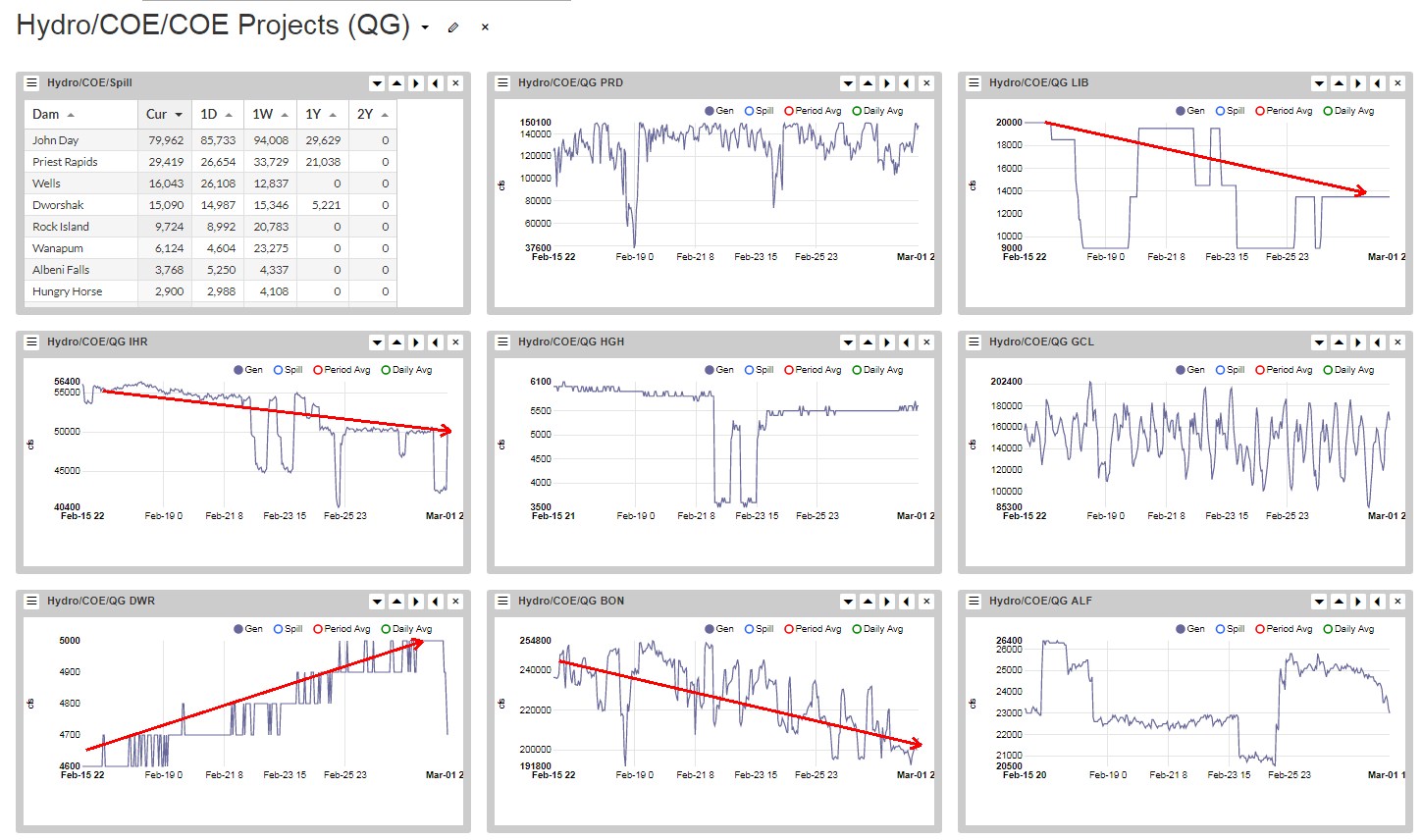 Without significant rain, all the changes are regulation and flows on the Lower Columbia continue to drift down. The RFC’s ten day reflects this, too: 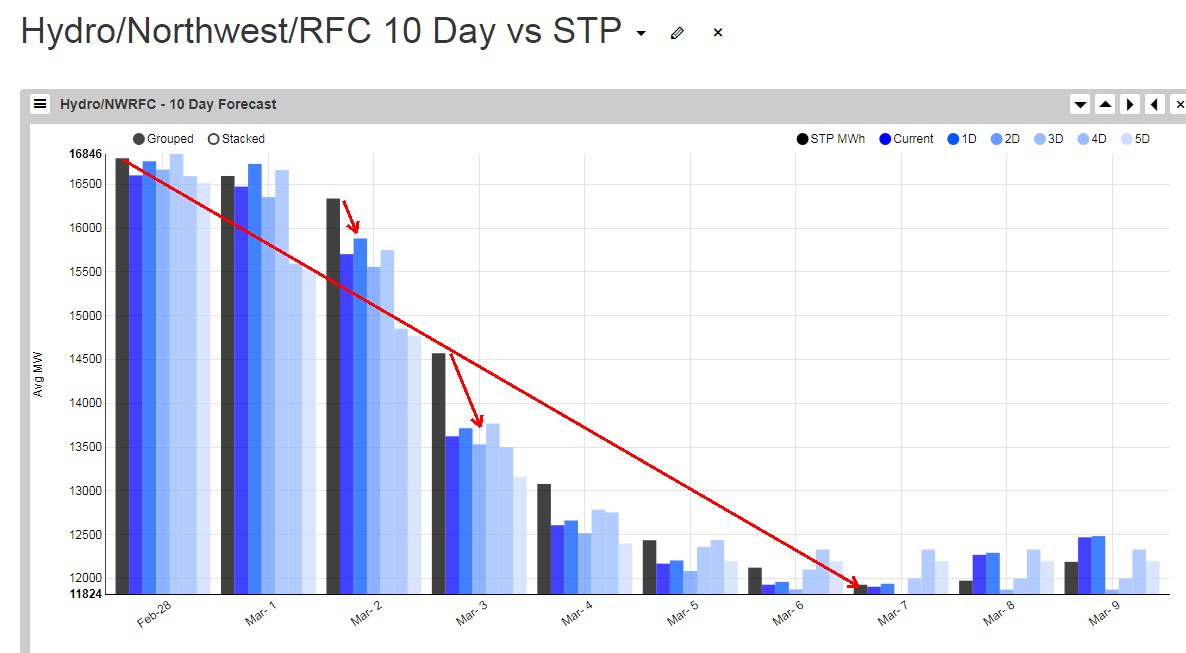 This plot reflects a precipitous crash in energy equivalents over the next ten days. All of those changes are regulation as much of the Feb drafts expire, and the March drafts don’t begin till the latter half of the month. With normal temperatures, the Northwest will remain modestly tight for the first half of BOM.

Coulee’s discharge continues to drop despite sharp drafts on Lk Roosevelt; now the project has but a comfortable seven feet to get to its drum gate target. Let’s talk about that draft.

Next week’s March Flood Control will be set off of TDA’s Apr-August, which today is 111% of normal; contrast that with the 108% used in last month’s Feb Flood Control – up 3%. That can mean only one thing – a deeper draft. 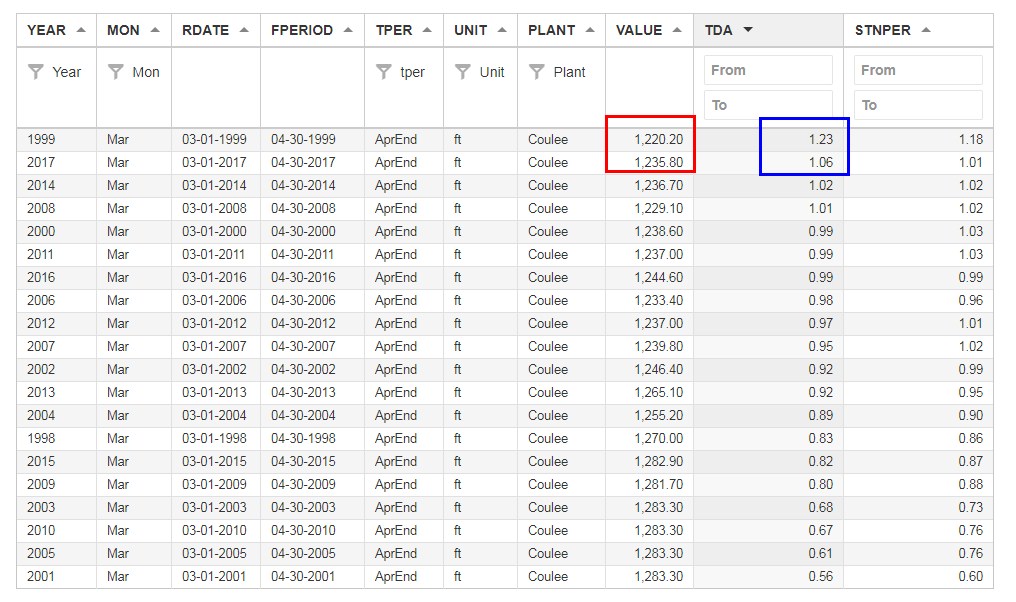 There are not many reference points where the outlook was so high; only 1999 is comparable. In that year, the March release required a draft to 1220′, which is functionally the bottom of the pond. Unless there is some new voodoo in the math, we’d expect a draft at Coulee of 1227, which is a non-event. The project was already set to draft to 1232, now five feet more. I think a more significant reality is the early drawdown for the work at Coulee; a lot of the evacuated water has already passed the project. Typically, the dams above Coulee draft first, once their draft is over, Coulee pulls. Not in a drum gate year, Coulee has been pulling all month meaning it is also drafting the upstream drafts. Once those upstream projects stop their drafts, starting today, inflows to Coulee will back down making it all the easier to get to its targets. We call that bullish. 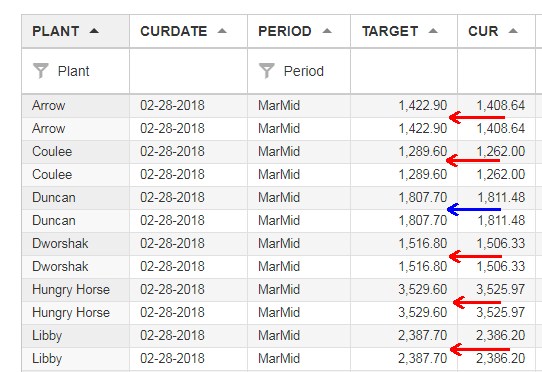 This table shows the current elevations versus the targets for Feb 28; 5 out of 6 projects are ahead of schedule, again suggests much of the WY18 draft has already taken place. Still, this is a big water year, especially above Coulee:

In fact, it’s off the charts big, but you don’t see that in the STP:

The Feb reflects a big water year, so does May, but not March and April. Perhaps because it been cold and the melt hasn’t kicked in, unlike last year where we had so much low-elevation melt in March. 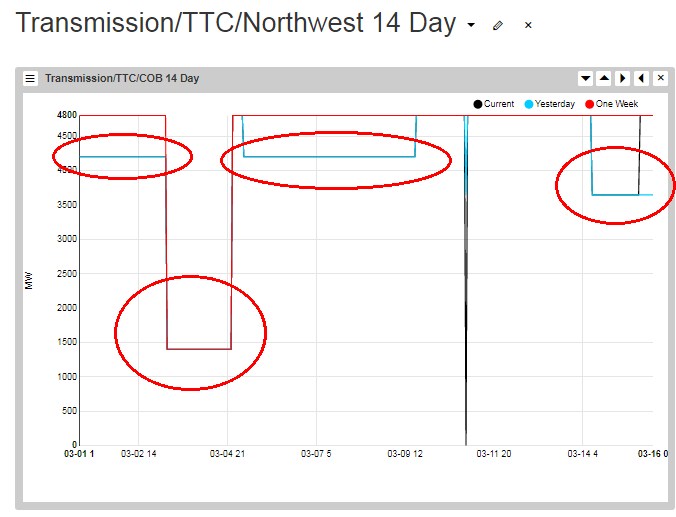 Several new and minor derates on the AC. 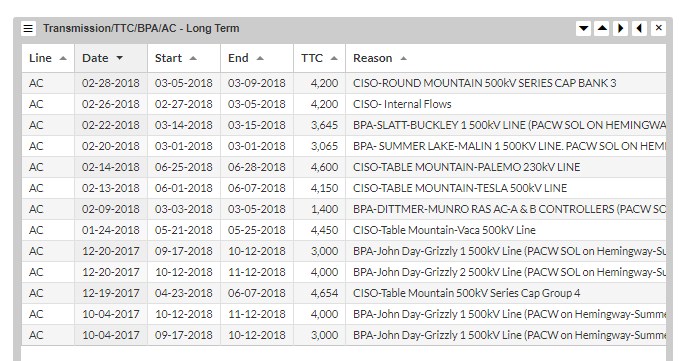 BC is a net buyer, the AC and DC are functionally full in every non-solar hour; flows out of ZP are sideways; flows from Palo are off. It’s just business as usual.

Weather is less bullish, except in Palo where some AC load will return next week. California gets a big storm today, but not enough to matter. The Northwest sits on a big snow year, but its too cold to impact March. Net, net, we’d be slightly bullish on the North and neutral everywhere else.