Our takeaway from the earlier post, was more bullish on cash than bearish. California remains an extremely dry water year, and the Northwest is exceptionally wet, all of which suggests spreads should be wide. We’ll first look at the back of the curve, then at the end gander upon the MidC front. 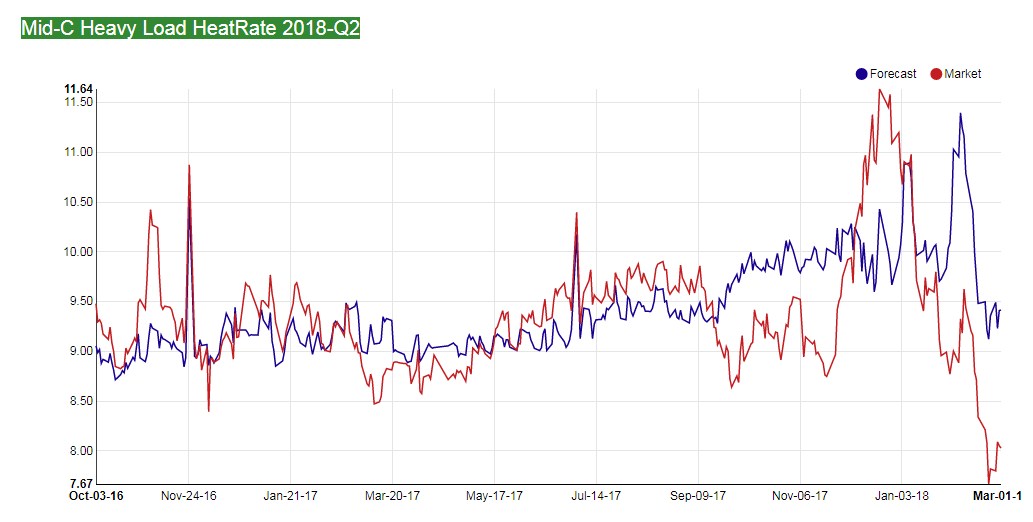 OK, this is Mid-C front, but its a Q, so we look at it in “APT Back.” It’s a cheap Q, too, but maybe rightfully so give the astounding snow levels above Coulee. Then again, perhaps its oversold? Remember last year, when the Lower Columbia flows were over 500,000 CFS, and BPA kept the gas on the margin. Don’t think those wily feds have lost either their ability or predilection for wanting high prices. We’ve always wanted our book to look like BPA’s if we can make it such at low prices. These are cheap; we’d buy it. 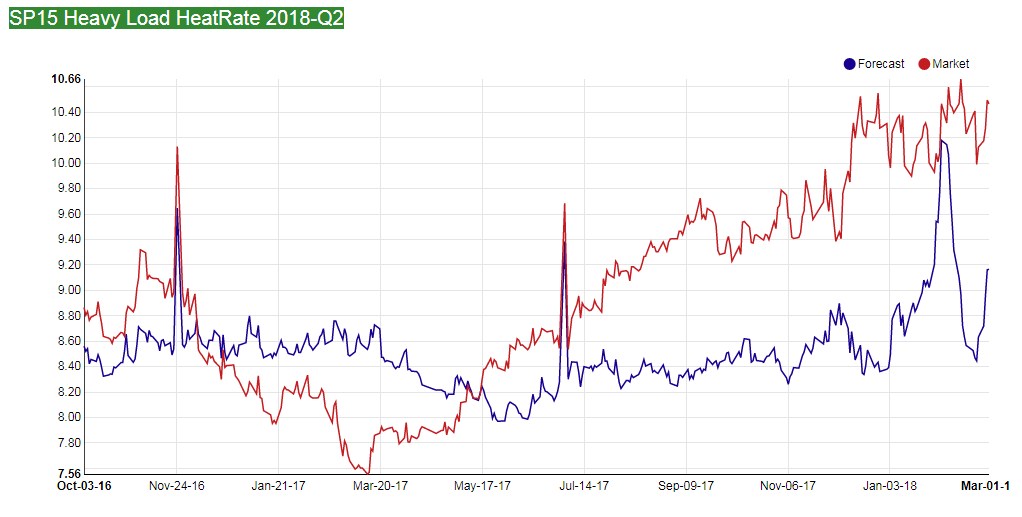 SP is high, but not cheap. The runoff in California will be weak; if there is any significant heat during the maintenance, we’ll see high DAs. We’d not do the spread, just own the Q2 MidC. 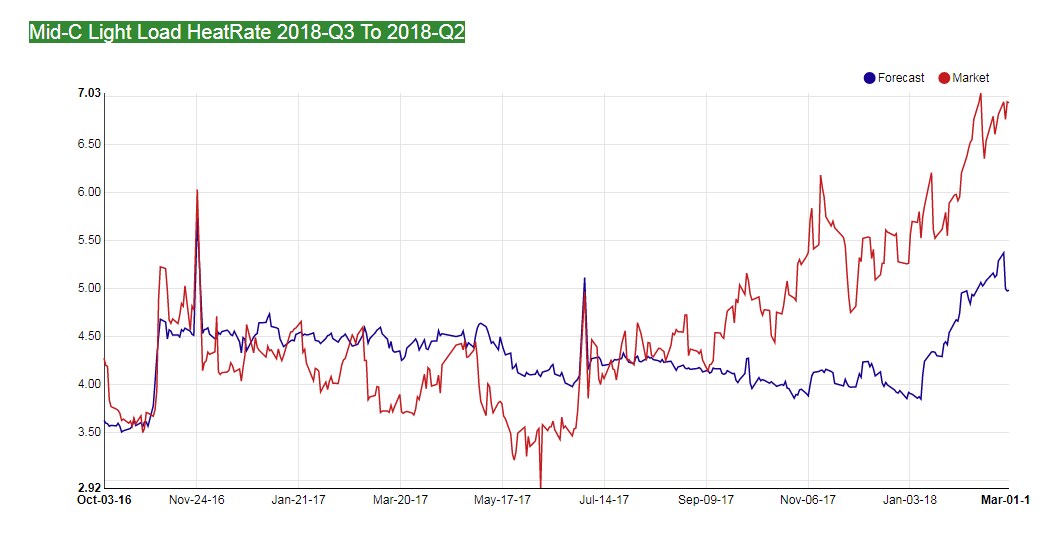 We’d sell this, too, the roll to Q2. With significant snow above Coulee expect an extended runoff, one which will most likely last through July. We already know the Q2 is cheap, but it appears the market thinks Q3 is immune to this type of water year – it’s not. Since we’re already long the Q2, we wouldn’t double down, but we’d be equally happy shorting the roll. 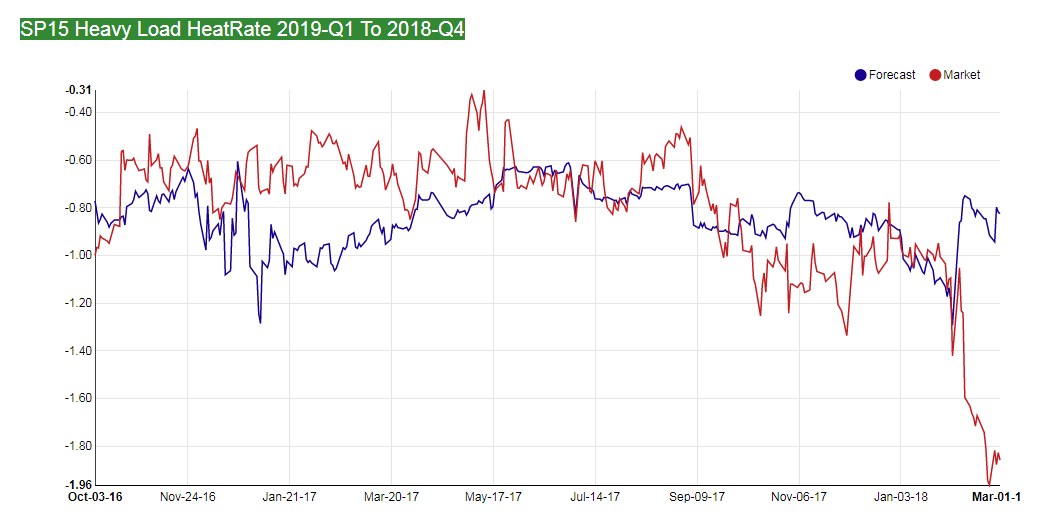 This is anomalous pricing, the Q1 to 4 roll at SP. We like fading extremes, this is extreme and would buy the roll. 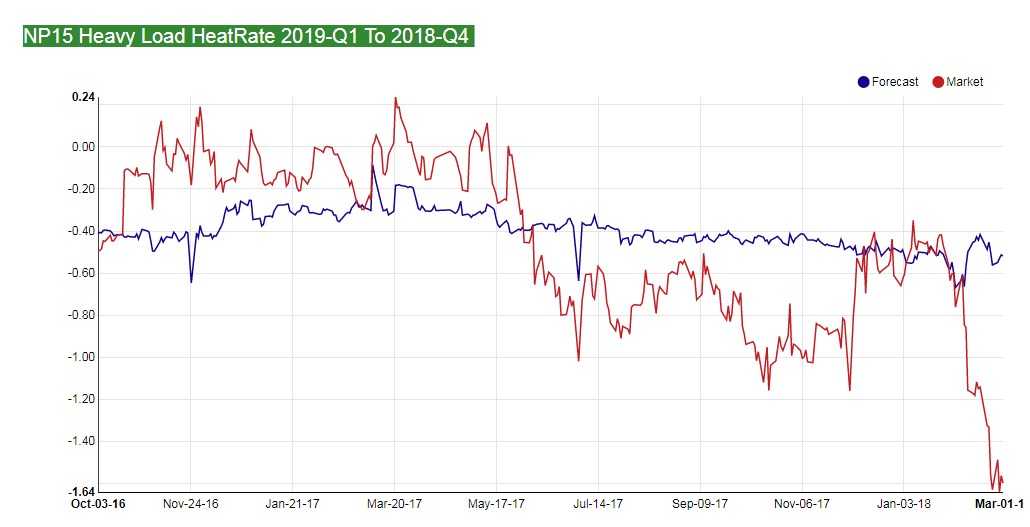 Pick your poison; you can do it at NP, too. Sure, it’s a dry year but this is priced at an extreme, and we already know California gets weather in streaks; we’d be biased for dry next year, too. 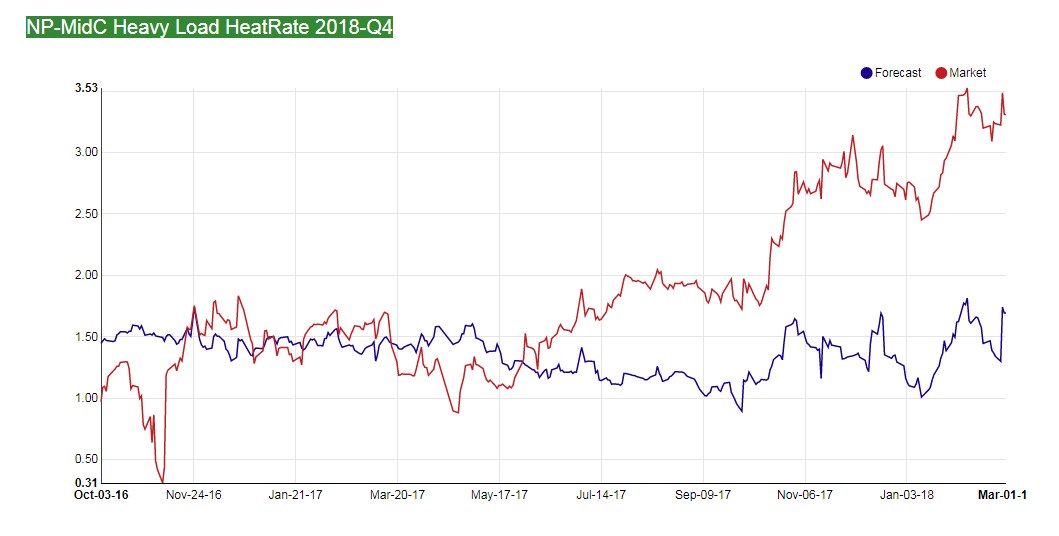 At some point this spring or summer, the MidC is going to get hot, and prices will soar; when that happens, this spread will come in. You might need the patience of Job to get paid, but we’d be confident of booking this out in the black. 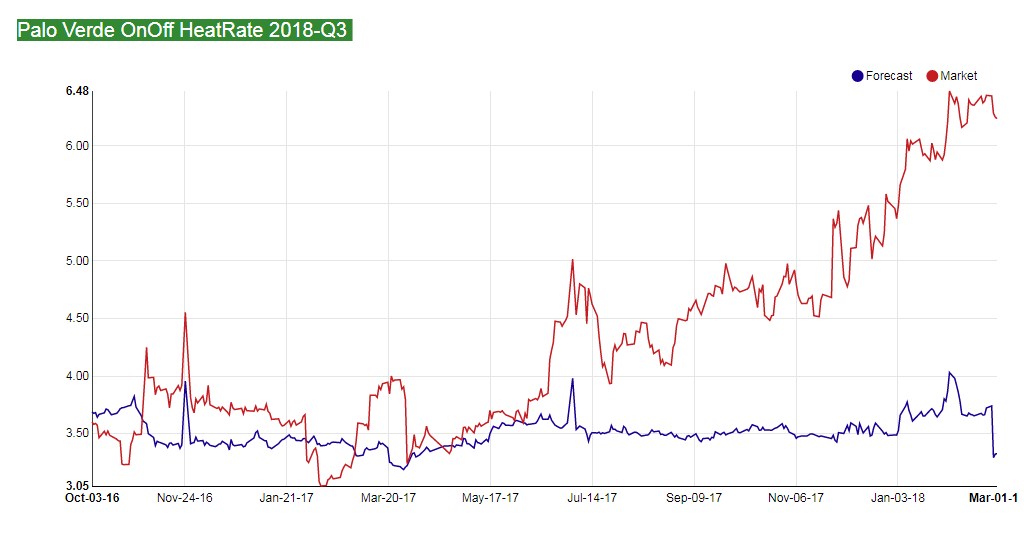 Palo is not impacted by dry California, but the On|Off is now at a contract high. Not sure why, but like the last trade, this one will get paid more likely than not, though shorting it is selling the daily call. 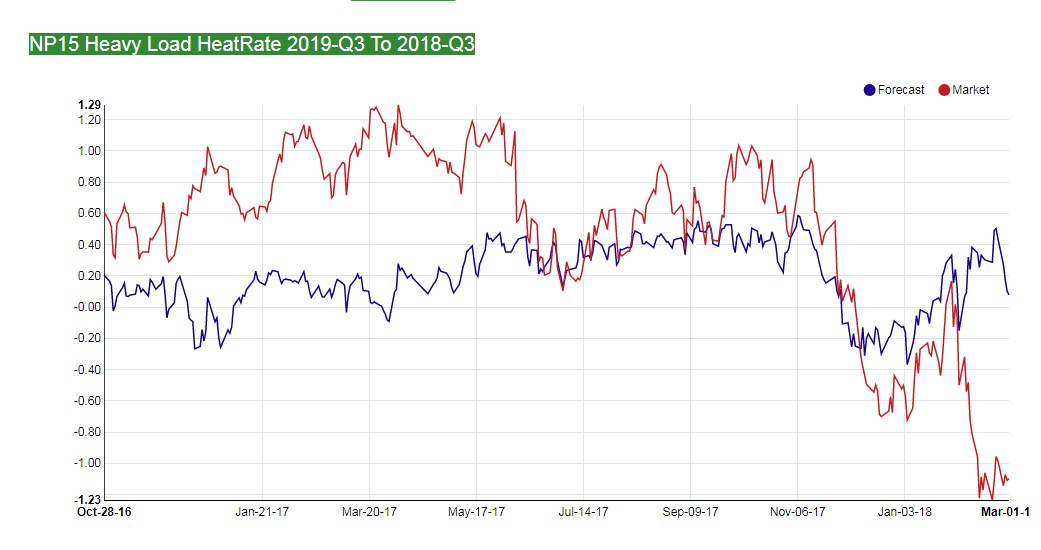 A contango roll, except this, is backward-dated at an extreme. Like we mentioned earlier, California water years run in streaks, and we’d be biased towards WY19 being dry – should this really trade that low? 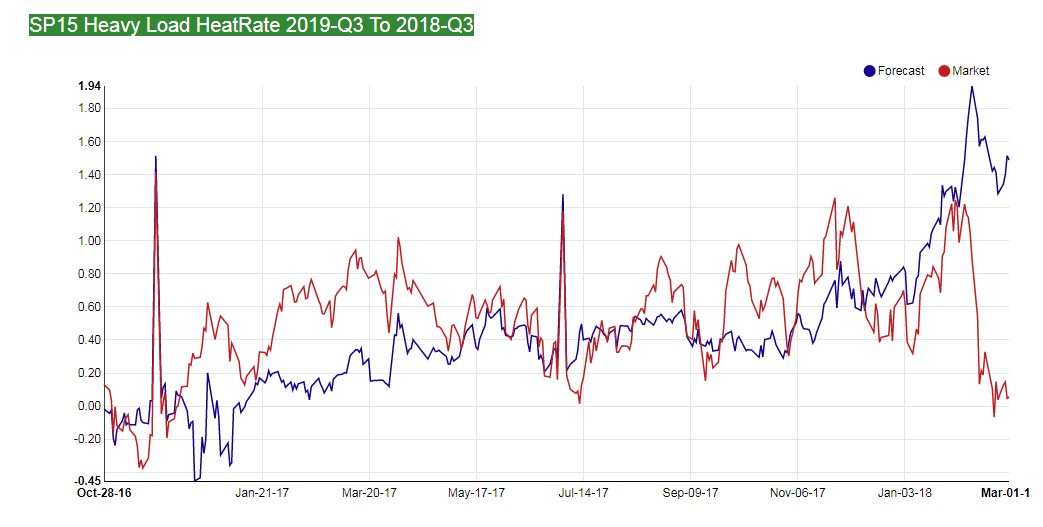 You can do it at SP, too, though the NP is priced more extreme. 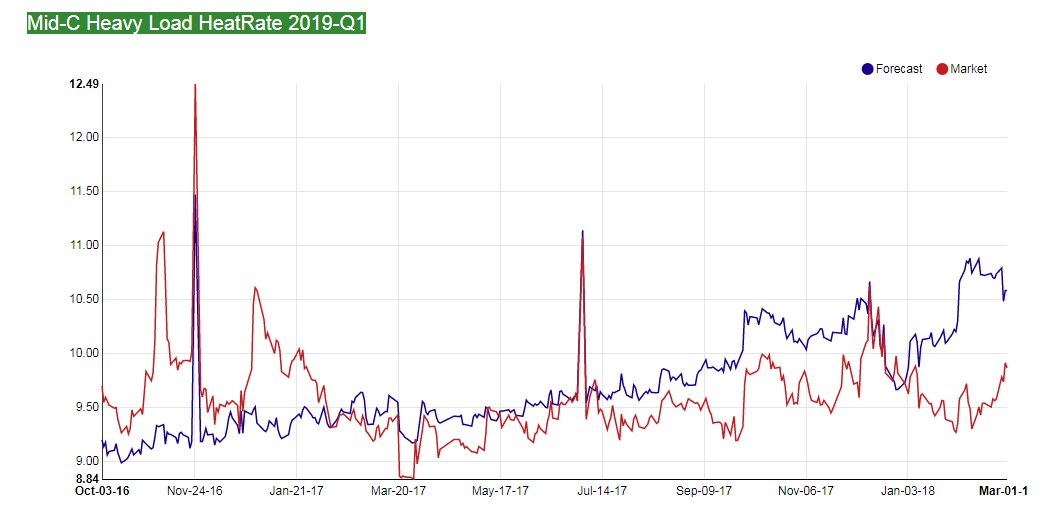 We wrote about this a few weeks back, how cheap it was; now it’s not so cheap, but we’d keep it on as we think March MidC is tight and will put upward pressure on the Q1. 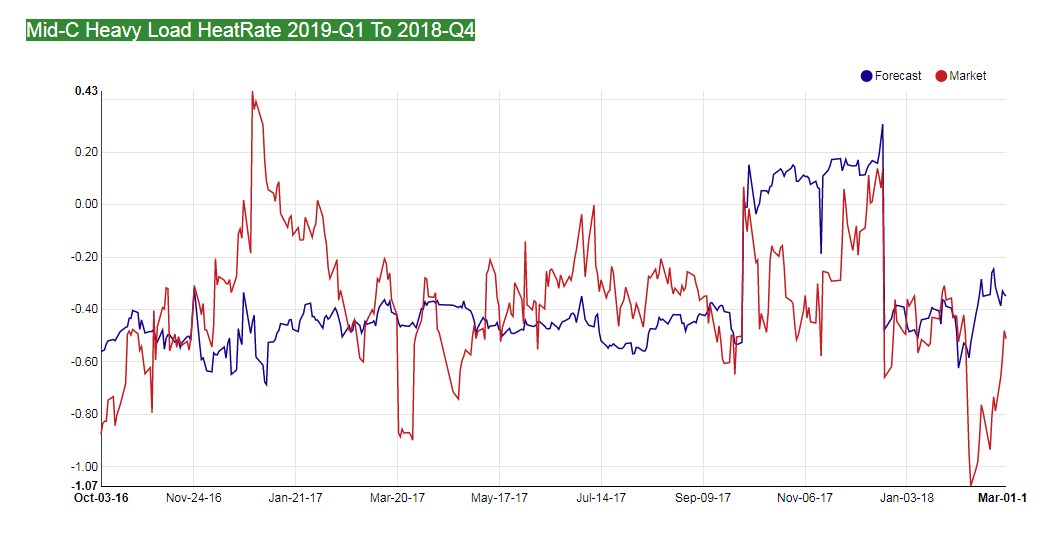 Wrote about this too, from the buy side, and we were right. Not sure we’d liquidate, either, not given our March sentiment.

April bounced a bit off of a low; it is still cheap, just less attractive than last week. Again, we see tight March which will put upward pressure on April and would stay long. 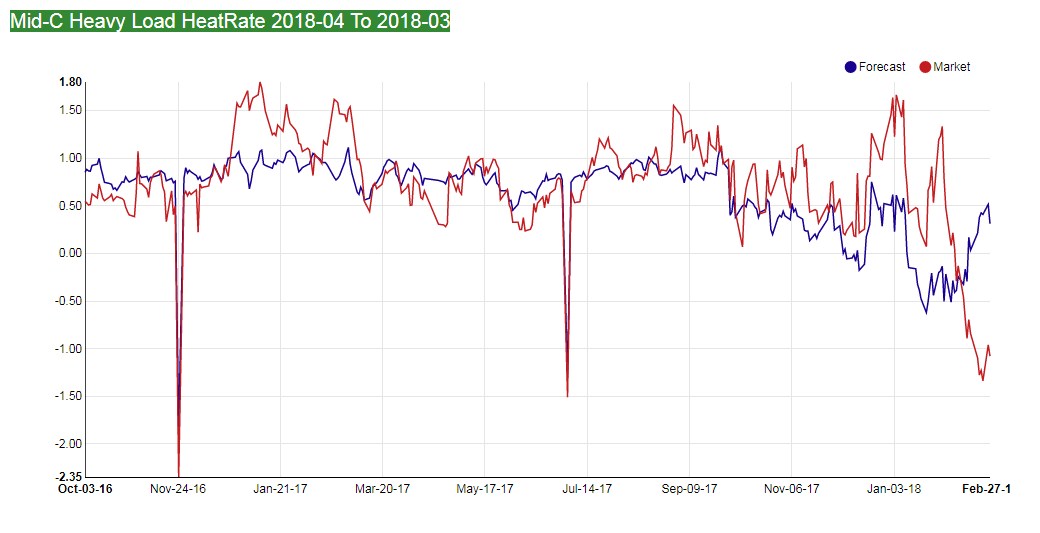 Our last look at the Apr-Mar roll; it bounced a bit. We already liquidated our short here; now we’d just play the April from the long side. Our fear, and should be yours too, is Northwest heat; all bets are off the table if we see Kalispell in the 70s; we don’t, so, for now, we’d be biased long the BOM/Prompts in the Northwest. 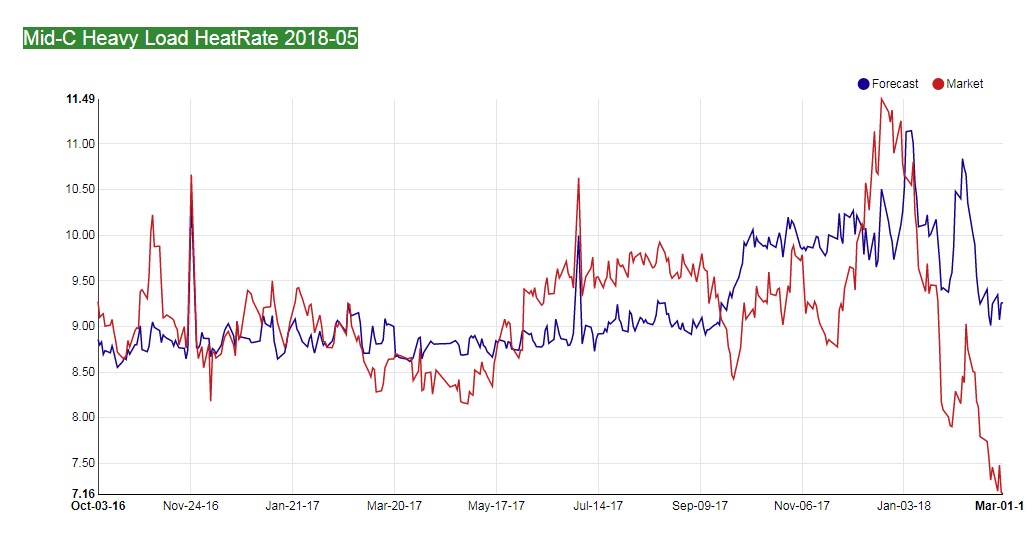 This didn’t move, and we’d stay long. Sure, massive snow, MidC will get crushed. Yeah, right. BPA will fight tooth and nail to keep the gas on the margin, and with this cold weather of late, they won’t have to fight very hard. Plus the deeper April draft just means more refill for May-June. Heat is your enemy in owning May – don’t see any and would stay long.

This is back into the cheap territory, but we’re long both so we’ll pass.

June staged a modest rally but is still cheap. Front-end cold may not have the same impact on June as it does May, though. Cold defers the melt, at some point, the deferrals don’t work, and that ALWAYS occurs in June. Offsetting that will be the deeper draft since the incremental refill of that deeper draft will be 100% absorbed in June. 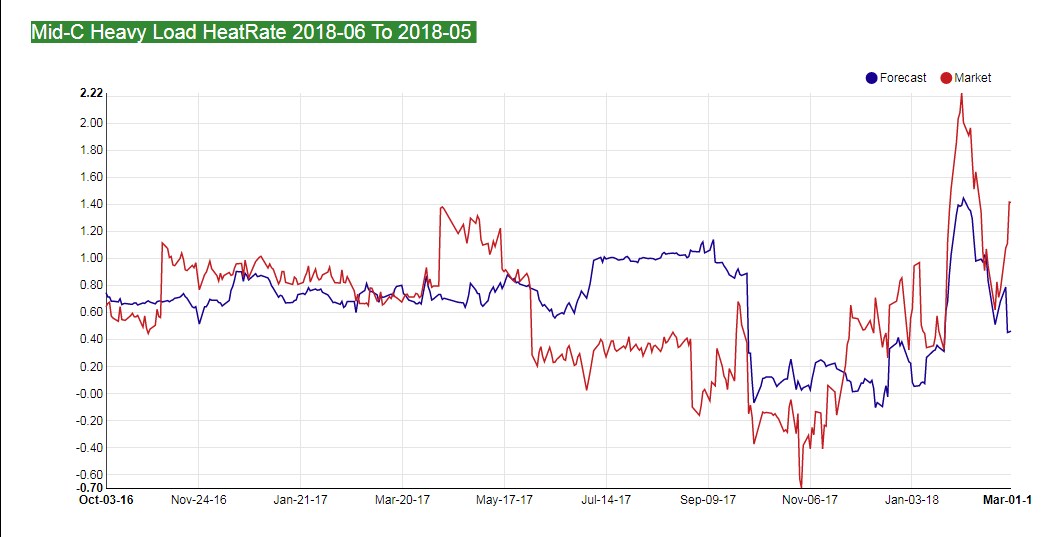 The trend here is to rally the June over the May, and we disagree. We’d own the May as long as it stays normal or cold. Maybe let this creep up some more, than whack it? 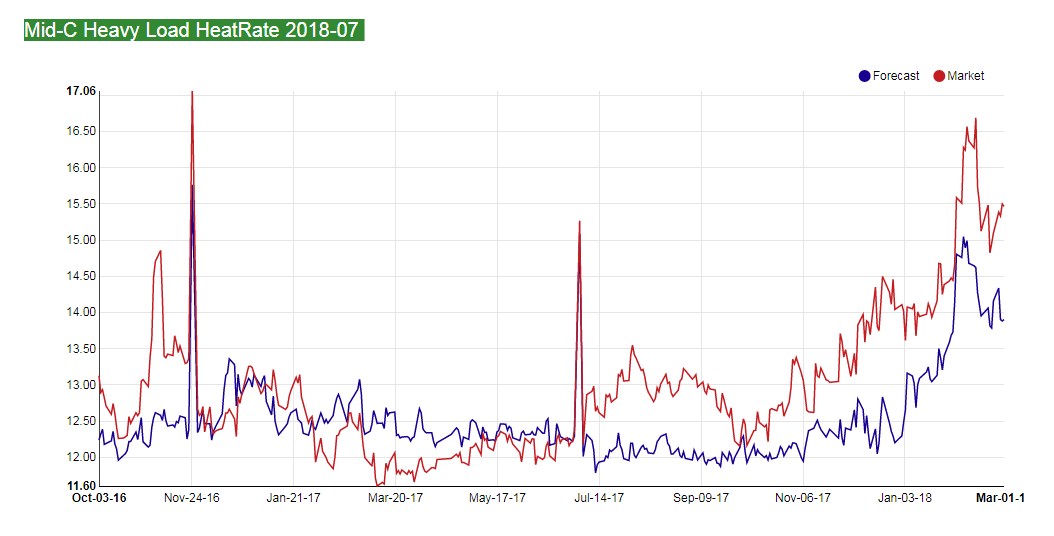 The market blundered when it let July set contract highs, now it pulled back some, but is drifting back up. A couple of July certainties:

As long as it stays normal to cold, we’d be biased towards selling July rallies. 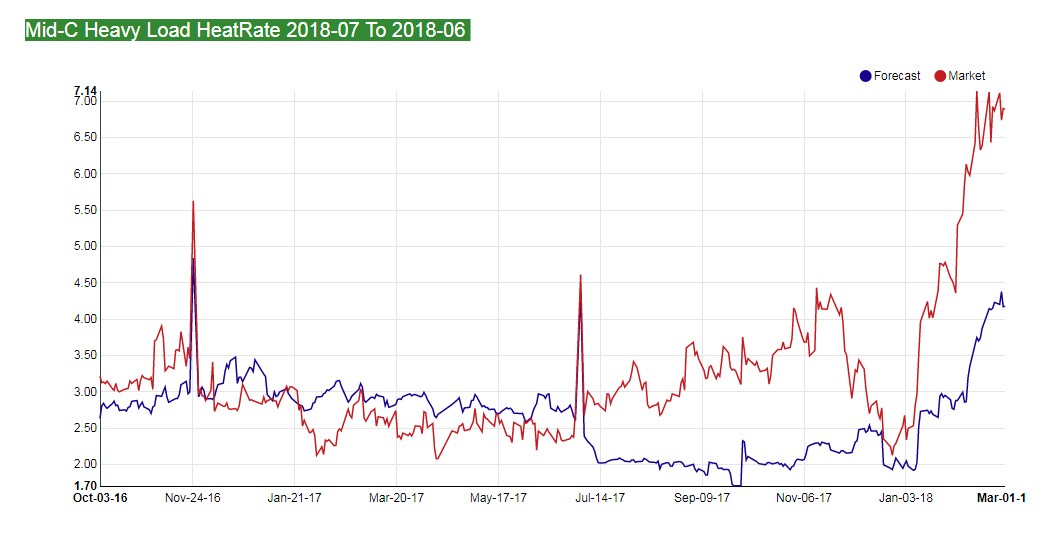 And selling this, too.

Like July, August has been beaten down but is still a bit pricey given this water year. Cold is bearish for August because it is bearish for July; warm will be bullish, but it’s not warm, so we are bearish here.

Garrett and I will be at Whistler, drop by our booth and check out our new 25 year forecasts. Quite excited about those and looking forward to seeing all of our friends.