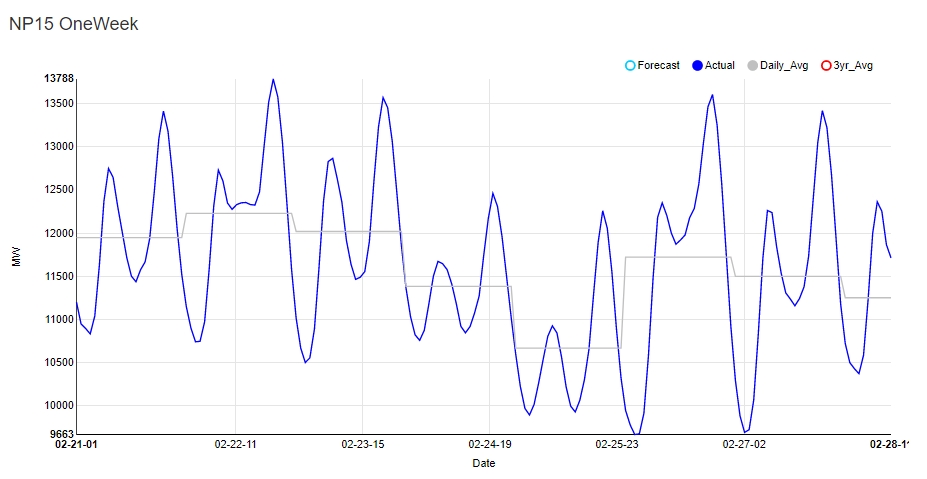 Peak demand decreased 190 MW day-on-day yesterday and mid-day demand fell nearly 700 MW.  Aggregate those and you get a daily average that decreased 230 MW. 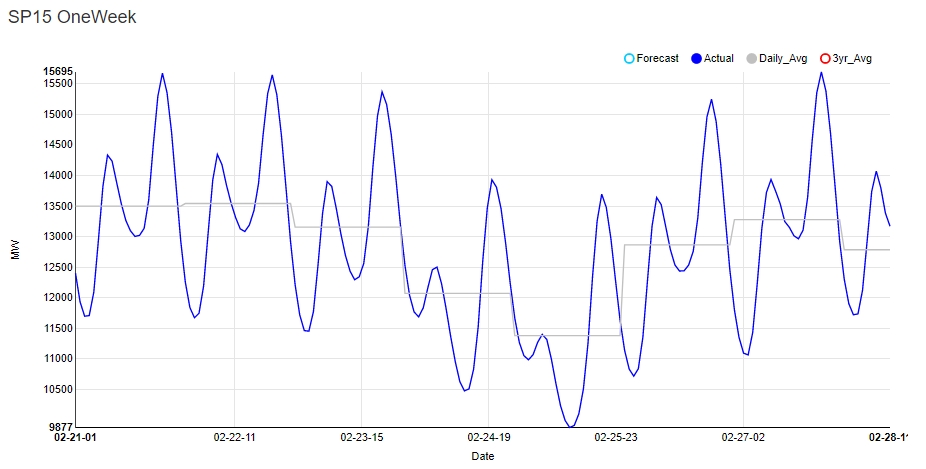 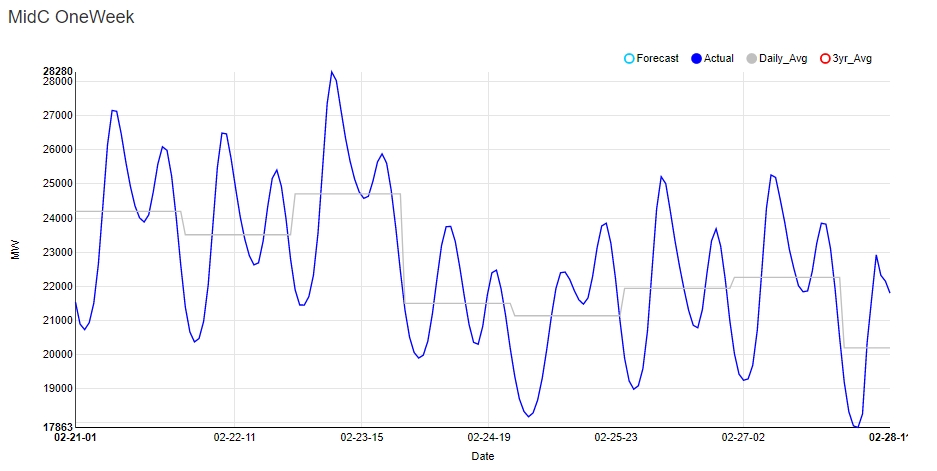 It’s cooler than one degree below normal in every station not named Albuquerque, San Diego, or Denver, the latter being the only station above one degree from normal.  North East Rockies, particularly Billings shows the coolest forecast with 7.3 under average.

The cold weather doesn’t look to be coinciding with much precip as Livermore stands out as the only station with considerable above-normal precip levels.  The Northwest looks particularly dry as each station falls more than an inch from average. 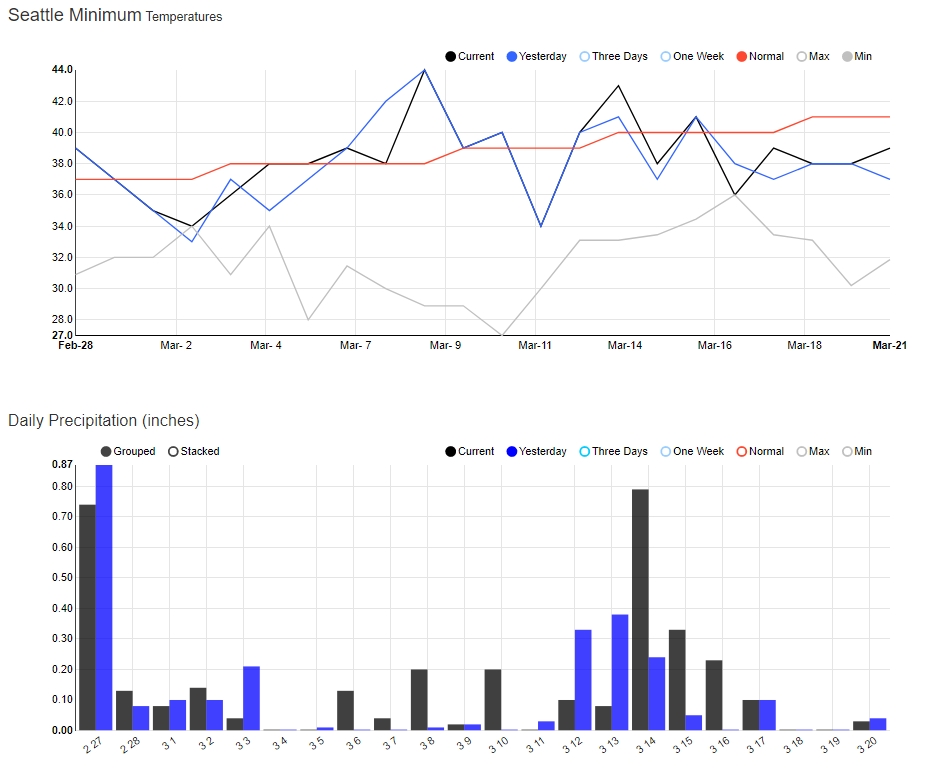 The lowest Seattle is forecasted to hit over the next 21 days is 34 on the 3rd, just three degrees below normal.  You’ll notice the average line is beginning to make considerable increases as well, rising four degrees over the length of the forecast.  Today marks the only day of large precipitation for the next two weeks. 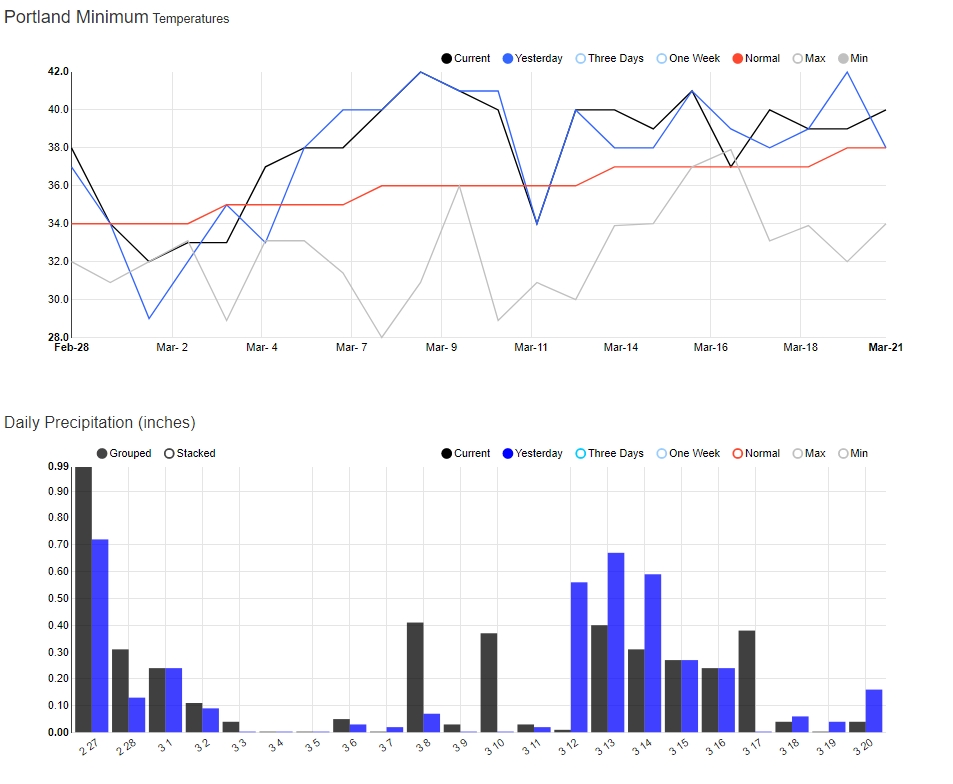 Portland will get a degree cooler than Seattle on the 3rd, but that equates to just two degrees below normal.  Daily lows will rise to the low 40’s by the end of next week and should stay above normal through mid-March for the most part.  Precip is especially subdued following today’s system.

Things cool off quickly on the east-side of the Cascades as Spokane should see a lengthy return of 20-degree nights beginning on Friday and extending into the end of the following week.  March in Spokane is looking like a lion with no lamb in sight. 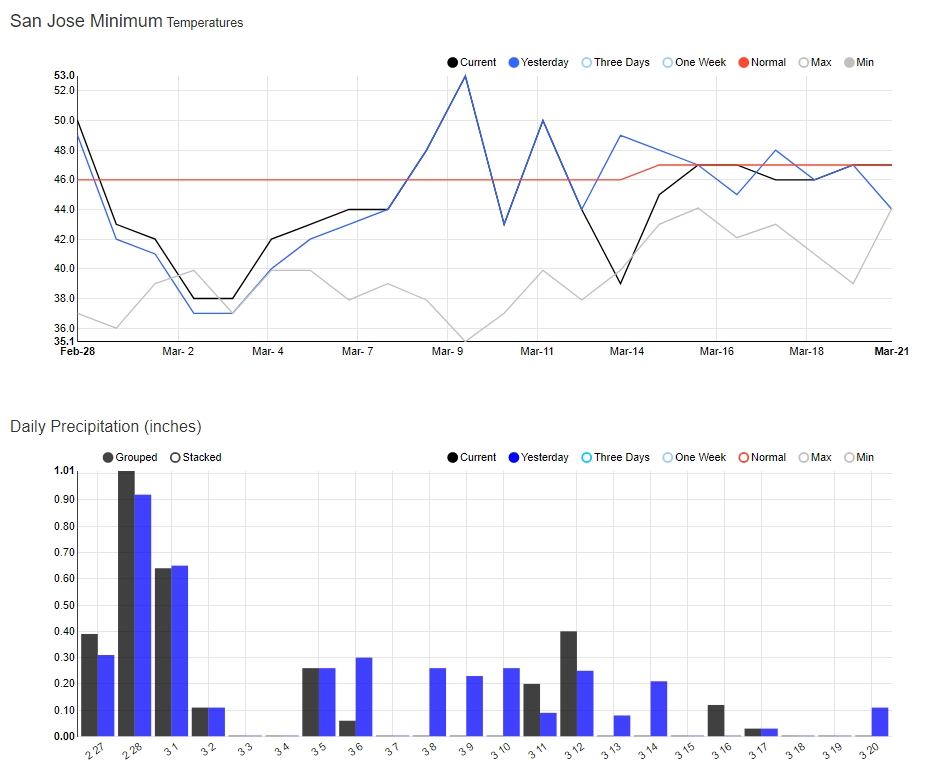 San Jose’s forecast is filled with cool nights and rainy weather.  Lows are set to plummet from 50 today to 38 for the 3rd and 4th of March, marking eight degrees below normal for each day.  Lows should return to normal by the following week.

Sacramento is cooler than San Jose, but only by a degree, though the anomaly remains the same at eight degrees.  Daily lows could stay below normal from the 1st through the 8th.

Phoenix is projected to dip to 43 tonight, eight below average, and stay below the normal line through the 7th before rebounding sharply into the upper-50’s.  Should note the 5th-7th were reduced considerably from yesterday’s projections.

Burbank may have the largest anomalies in terms of daily highs as the 3rd will reach just 56, 13 degrees below normal.  Highs should settle back into the low 70’s by the 5th and are projected to stay there through the remainder of the 21-day forecast.

Burbank will also see a return of 30-degree nights as the 3rd is showing a low of 39, seven degrees below normal.

Just two days through March 15th are expected to dip below normal and each are coming over the next five days.  Tonight’s low of 20 marks the coolest temp in the forecast, though that still equates to just four degrees below normal.

Salt Lake spent most of the winter exempt from daily low anomalies, but it should see a sharp cooldown next week as the 5th shows a low of 23, eight below normal.  Contrast that to tomorrow’s low of 41 at 11 degrees above normal.

Watch for massive cuts beginning today as the RFC falls from 17,064 aMW to 11,876 aMW in a week.  STP will follow the same path though slightly higher through the remainder of the 10 days.

The snow continues to pile up in Mid-C, especially the further north you go as Oregon trails behind the average though has made up a considerable amount the past two weeks.  Clark Fork is at its highest level for this time of year since 2011, and sits nearly 4″ above average, all in terms of snow water equivalent (SWE).

Oregon West was seeing the lowest water year in more than a decade through most of February, but made up ground beginning on the 14th after adding nearly 5″ in SWE.  The basin will need to see a similar increase in order to match the average. 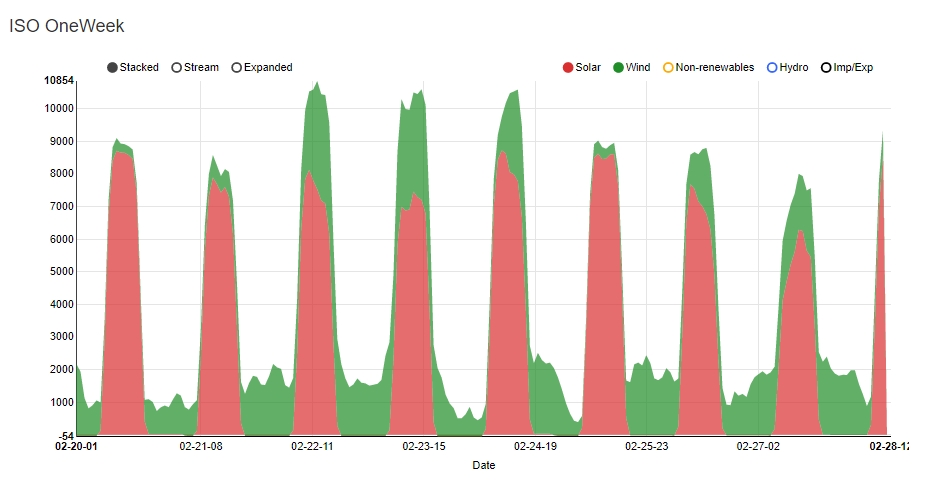 Solar generation has fallen 2,500 MW since the 24th, and wind hasn’t been enough to cover the difference as the two combined for a decrease of roughly 2,800 MW in that same span of time. 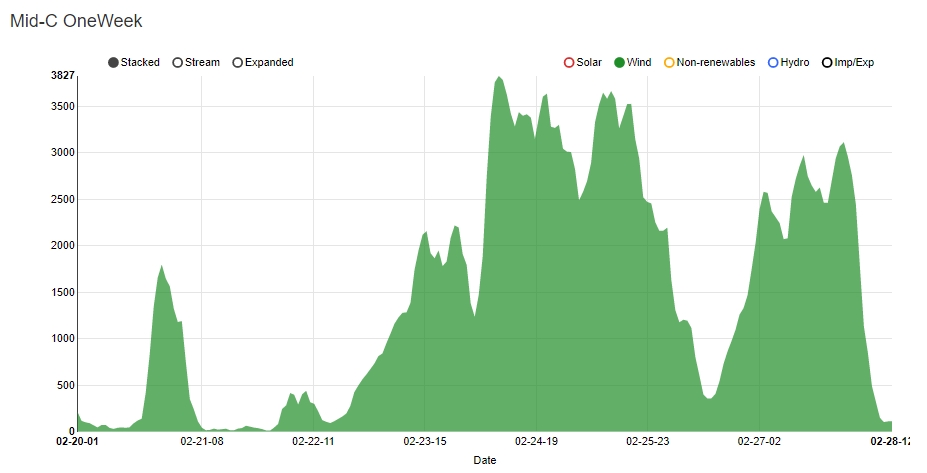 Mid-C wind has had a busy few days as generation peaked at 3,827 MW on the 24th and followed it up with several days of 2,000+ MW generation.