The WECC survived the arctic blast of 2018, though the cold somewhat lingers and the impact on the system will linger even longer. Storage was drawn down 3, and four bcf in Nocal and Socal, respectively, and Northwest reservoirs were pulled harder than otherwise both because draft targets must be met and natural river flows dropped off of cold and dry weather. In other words, the term market is more bullish today than it was two weeks ago.

Last week’s freak show inside Socal has abated, now the Citygate is sporting but a four handle where it was in the high teens. All the other hubs tanked, check out Stanfield’s 25% drop.

Socal’s extraordinaire core gas demand has not abated, unlike PG&E’s which has given back most of its spike. The Northwest’s demand remains strong, relative to early in the month, and the Southwest’s is up a bit.

Contrast PG&E’s system load yesterday versus a week ago, off about 400 MMCF; that ute’s storage is down three bcf, no one would have guessed that was going to happen on Feb 1. Socal’s storage is off, even more, over four bcf in a week. SCG’s system demand, unlike PG&E, was higher yesterday than a week ago. Flows on El Paso at Ehrenberg are setting records. 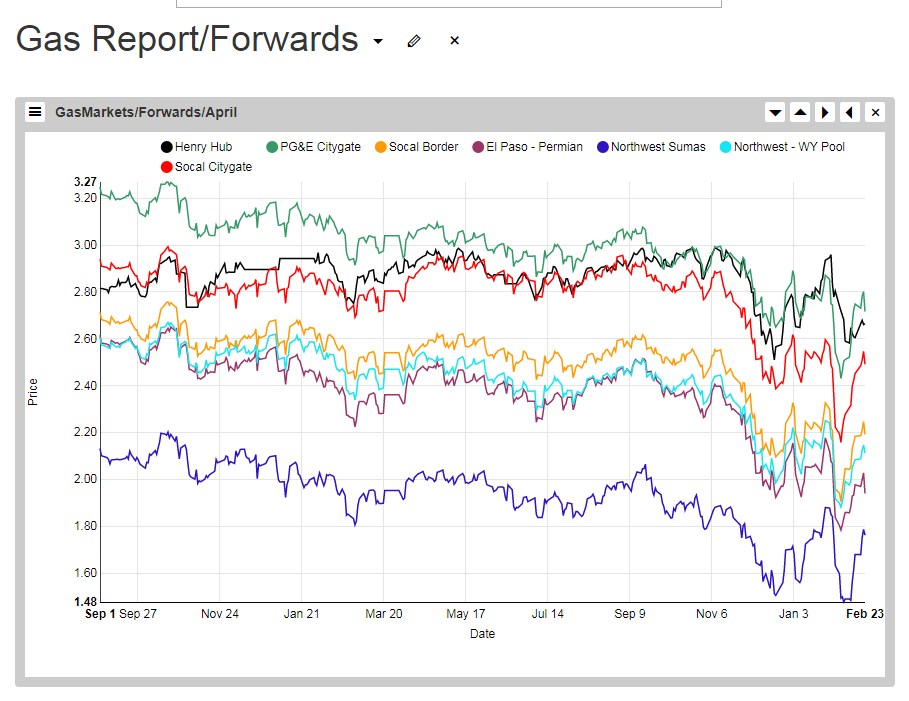 Aside from the February rally, the April prices are stable and reasonable; PG&E is the premium hub, ahead of Henry, with Socal Citygate just behind. Sumas lags all, but that is normal, especially in a big water year. Just how big remains up for debate; it was looking huge a month ago, not so much today. 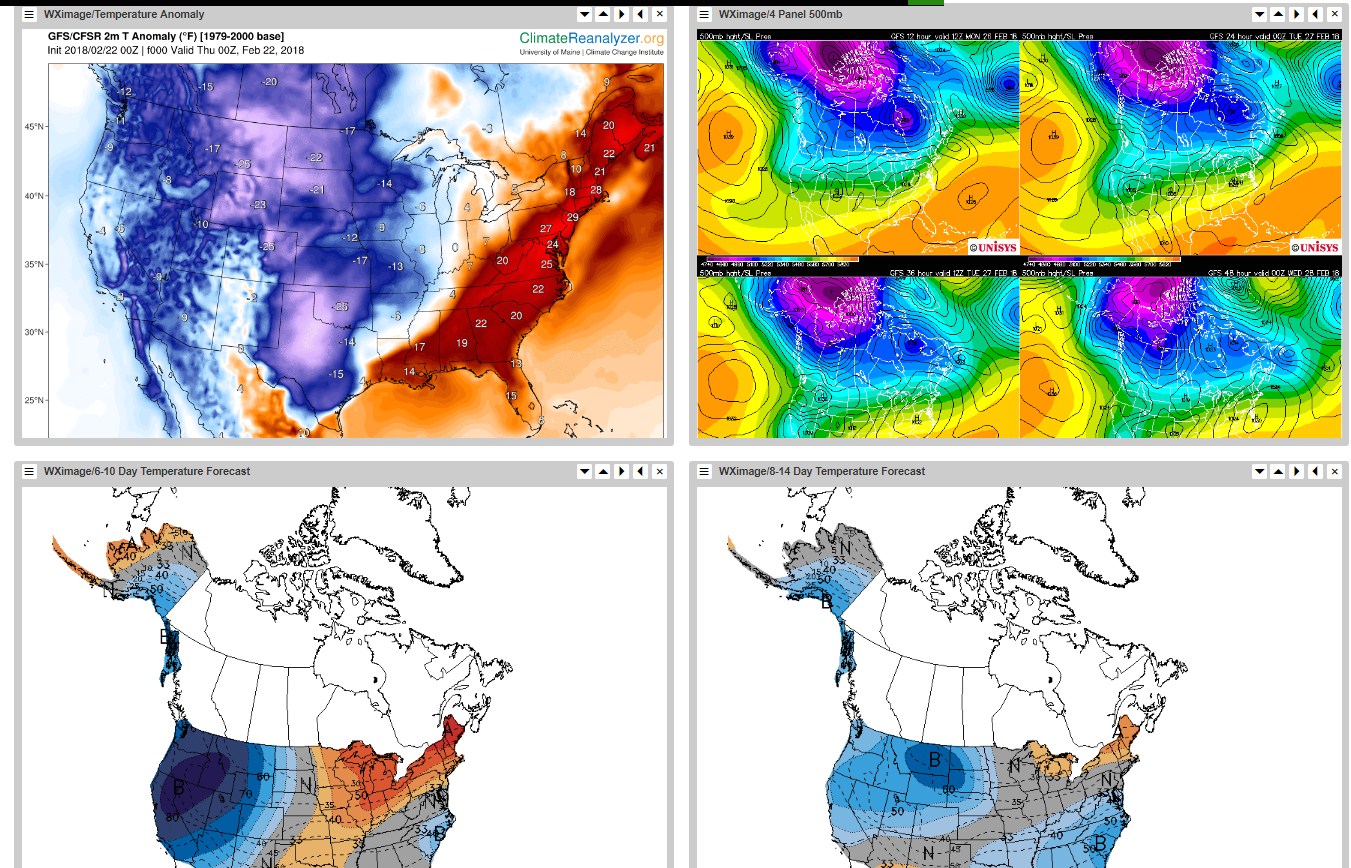 The 8-14 day outlook has weakened from last week but remains a cool anomaly in the north; the 6-10 is just cold. 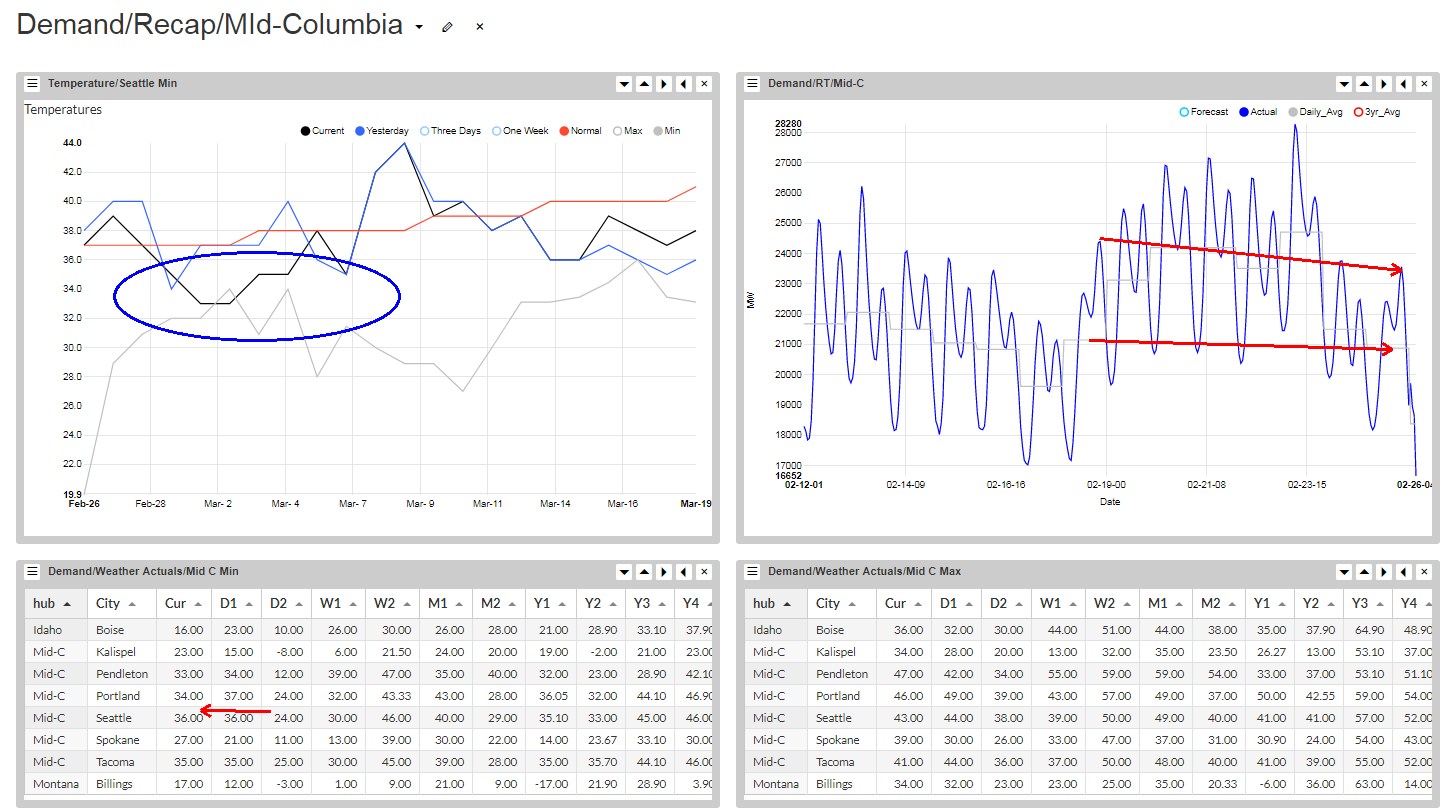 Despite cold, Northwest loads slipped from last week on the slightly warmer realized weather. Looking ahead, there is more coolish weather in store for the latter part of this week and spilling into next week.  A bullish outlook for the Northwest and teeing up those March contracts from the buy-side. 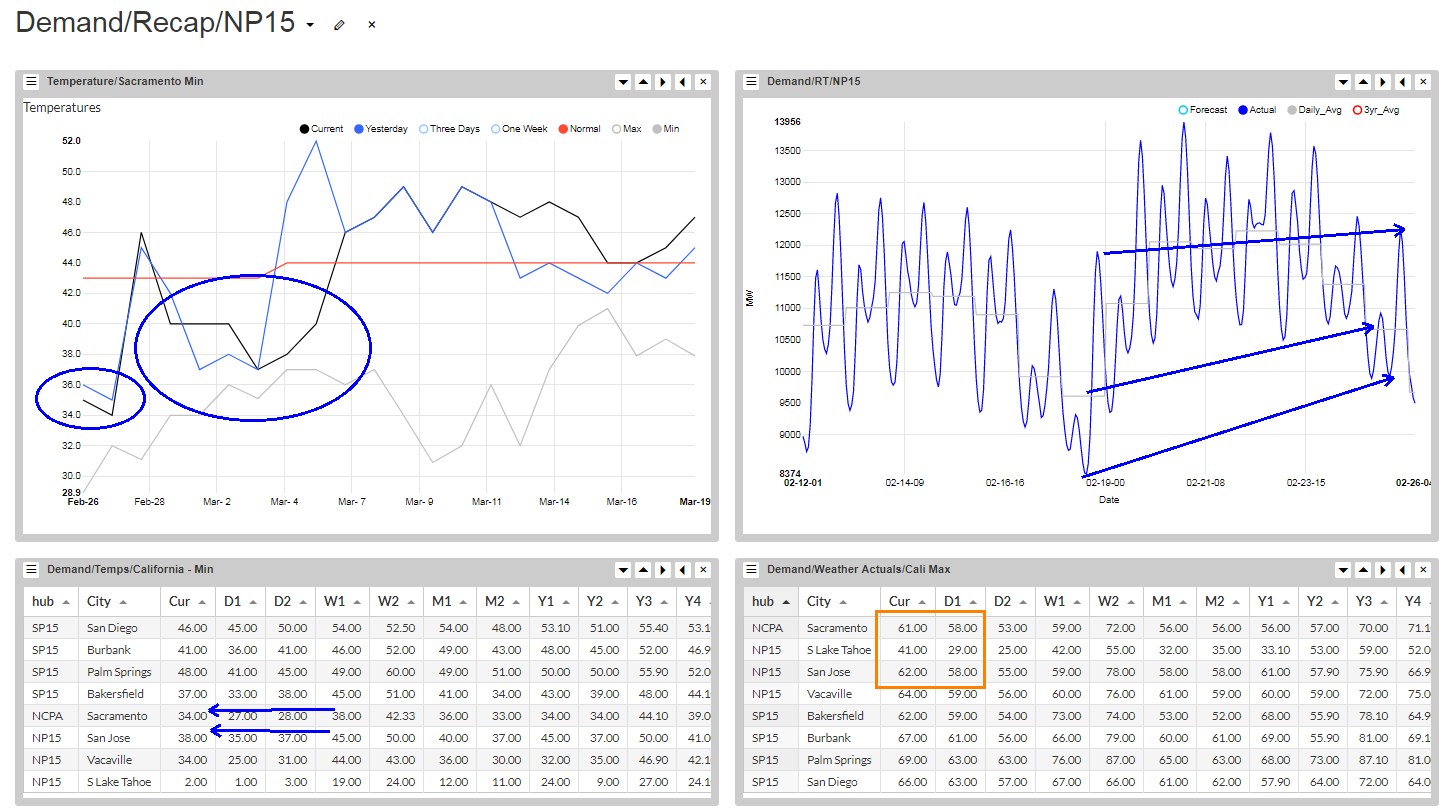 Unlike its gas demand, NP’s power demand rallied, week on week, off of colder weather. And like the Mid-C, later this week returns to cold putting further pressure on its gas storage, which is 28 bcf behind three years ago. 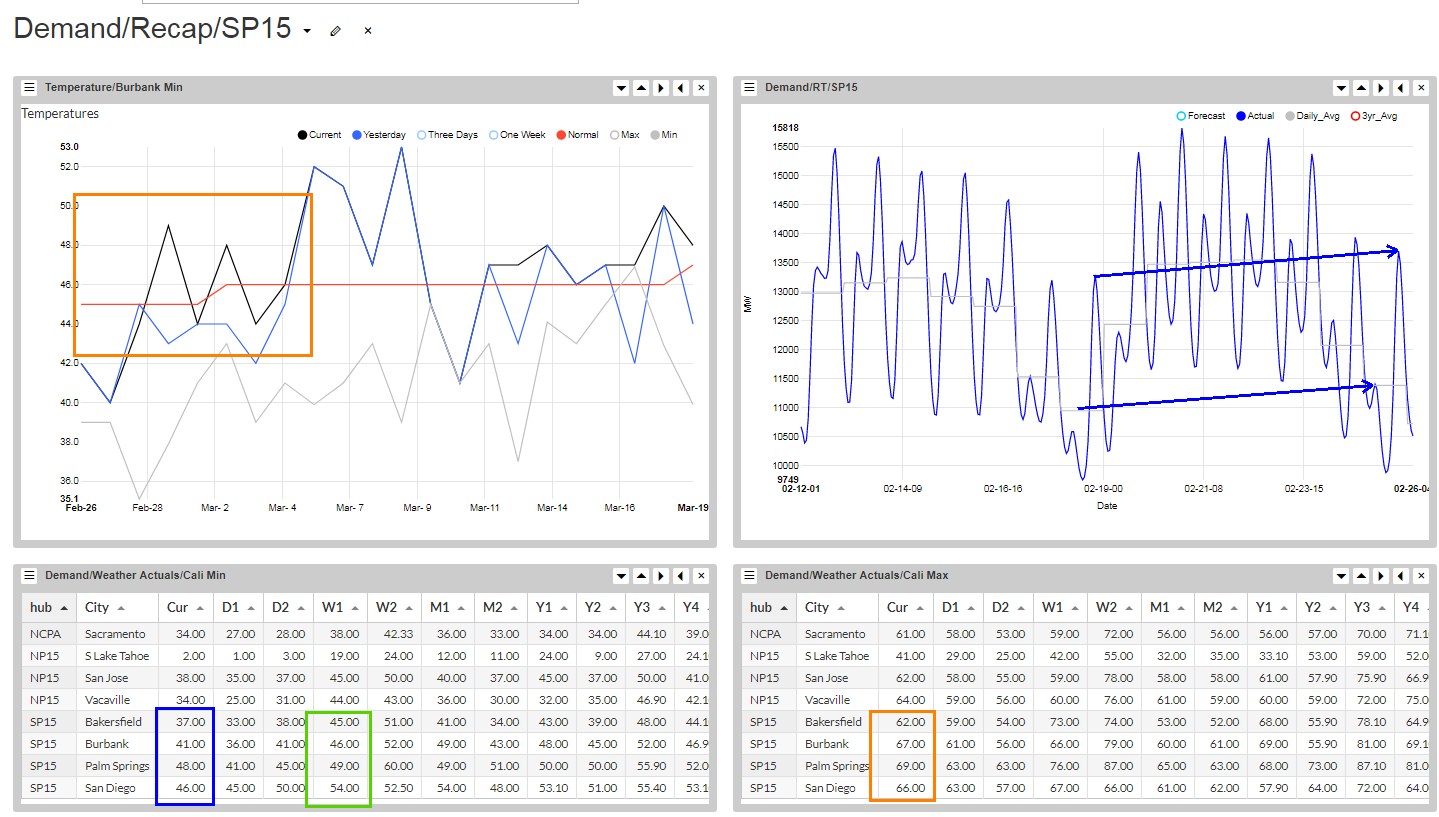 Socal doesn’t grow colder; it just returns to normal, then shows hints of heat. Loads are up, slightly, week on week off of cool nighttime temperatures, but look at how mild the daytime was. No wonder loads didn’t move much. 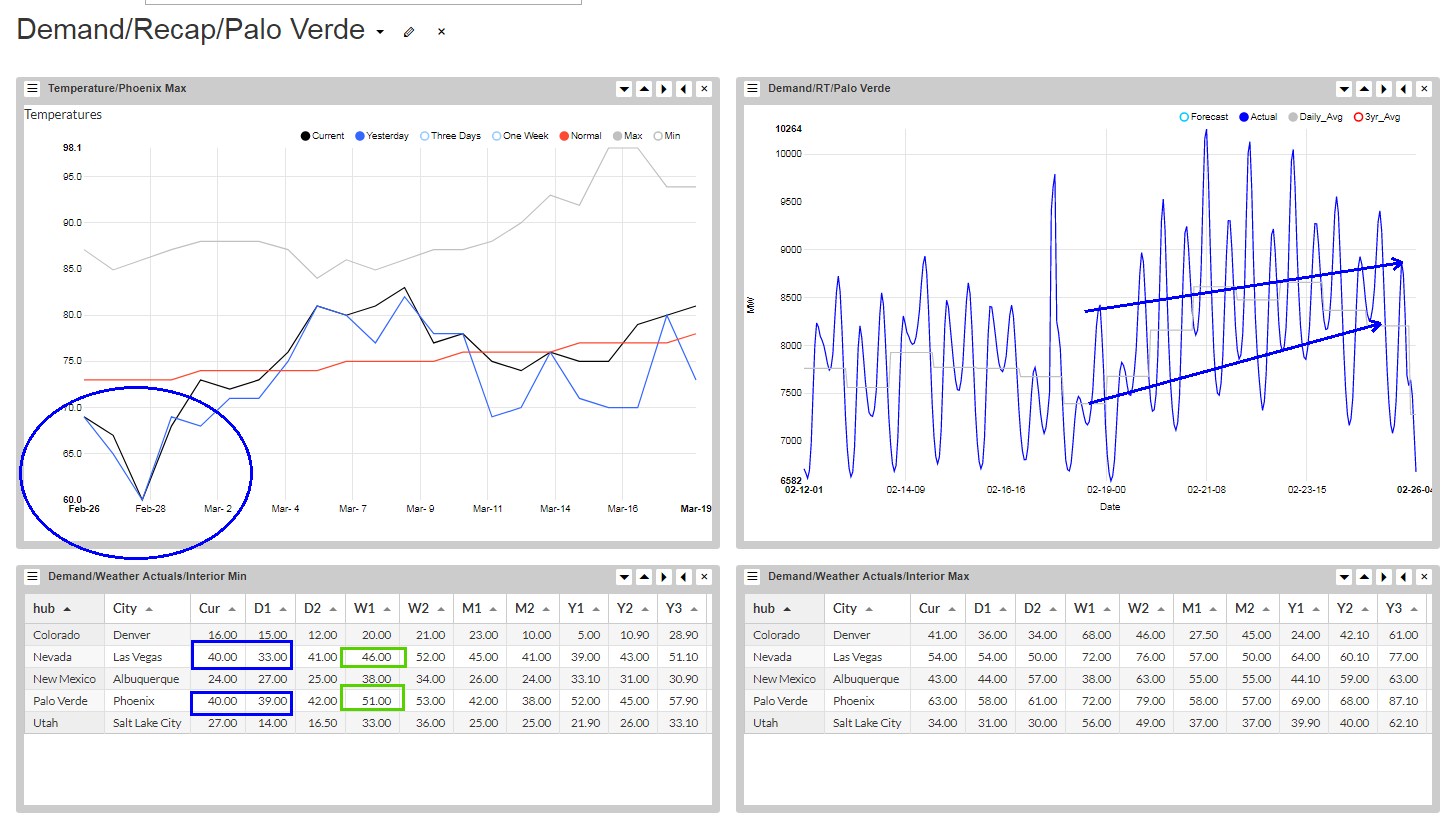 Palo dips down into negative anomaly territory, and its loads are up, week on week. 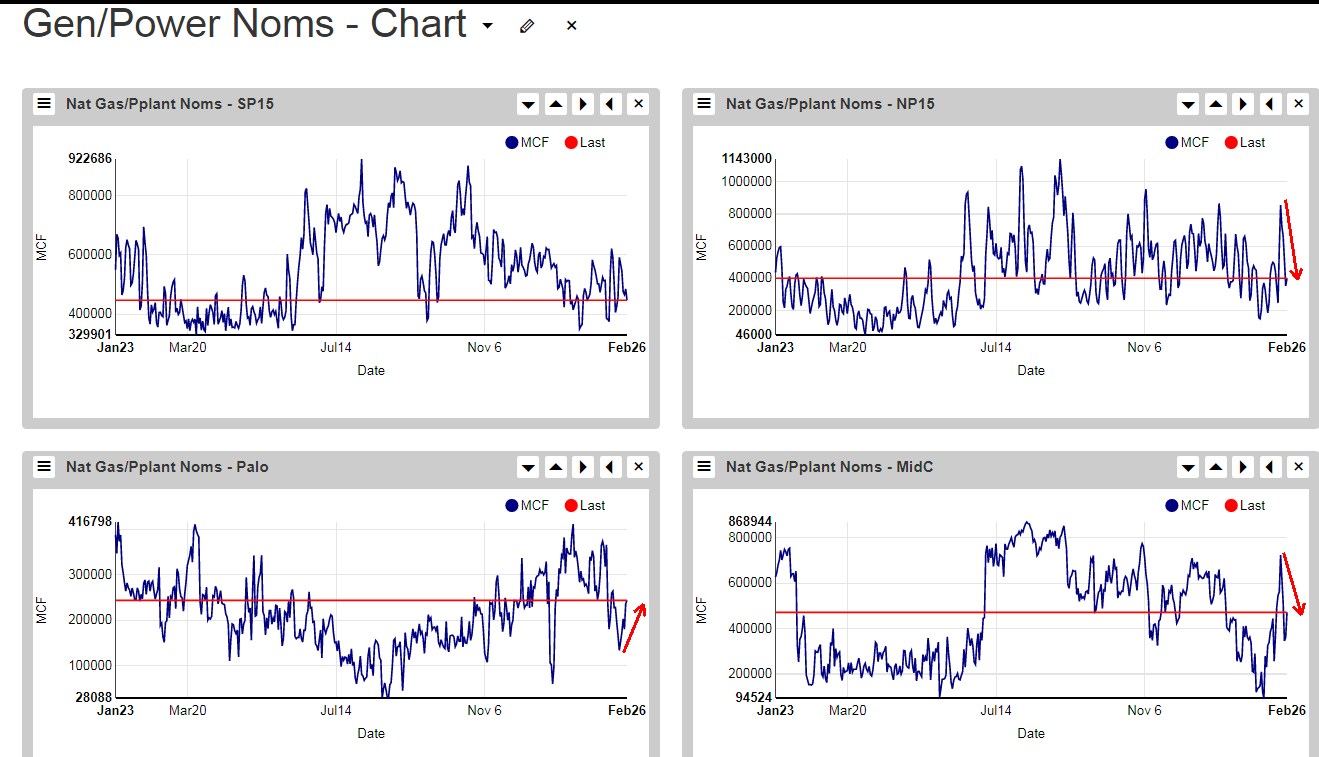 Both NP and MidC saw their gas nominations for power plants collapse; SP’s were already low and didn’t go anywhere while Palo’s inched up a bit. 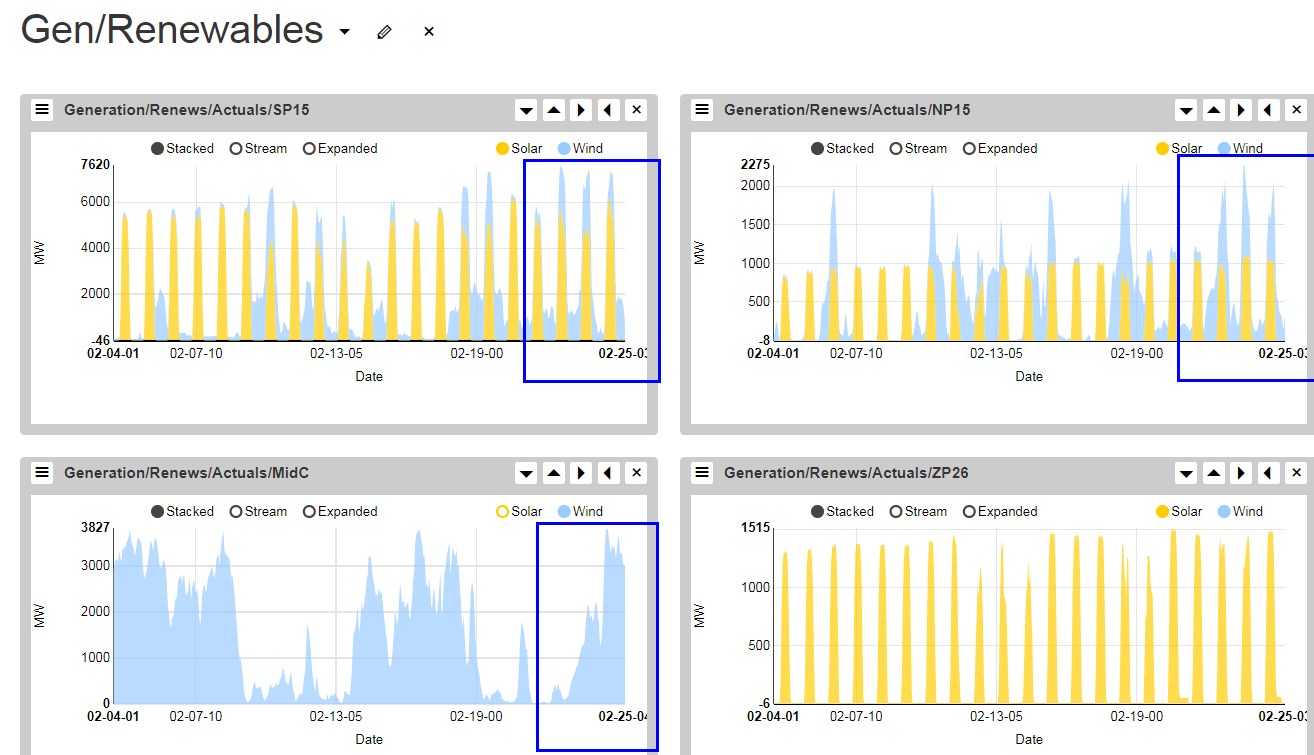 The weekend markets weren’t helped by wind; it blew everywhere.

Both NP and SP saw several wind hours over a 1000 MWs, SP had a few 2kMW hours, and it is worth pointing out the solar didn’t back off like it had been most of the winter. 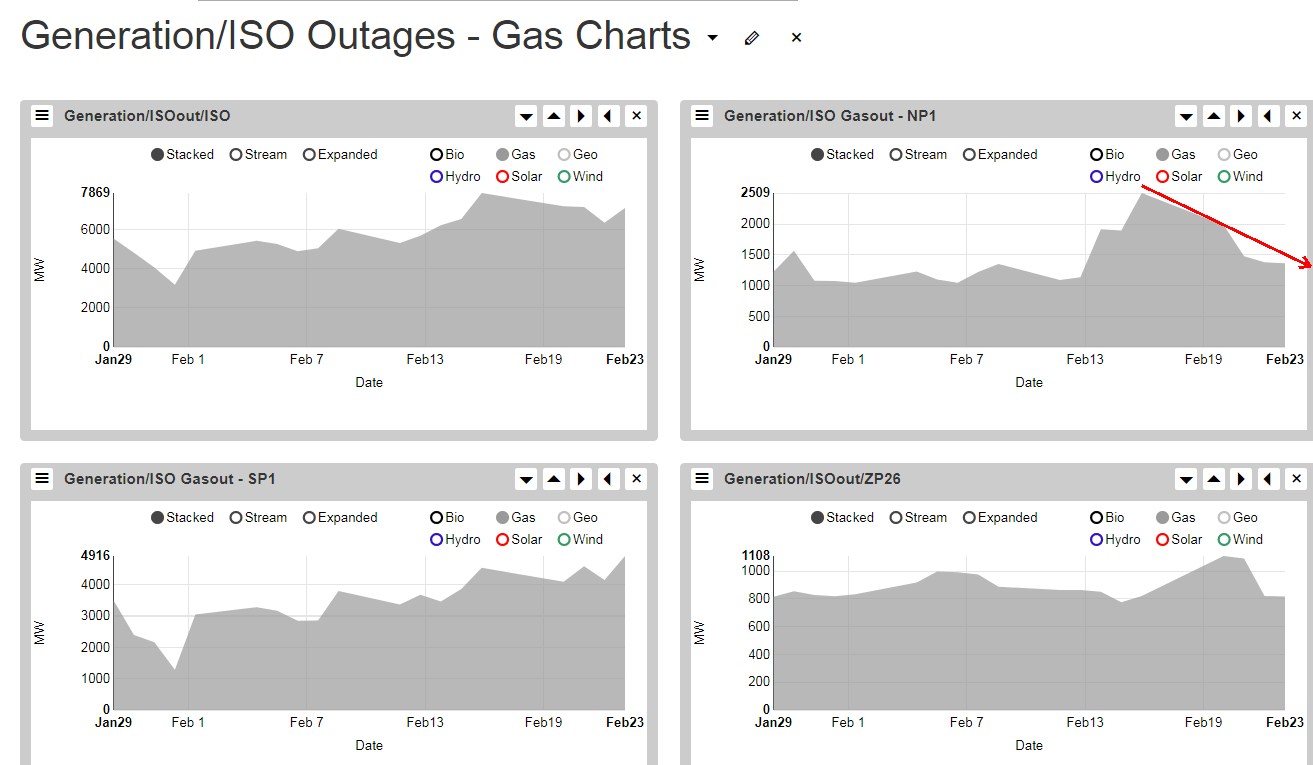 Outages (gas) collapsed at NP and were unchanged everywhere else. Diablo #2 is still out for its refuel, the PV unit returned, every other nuke is running at 100%. 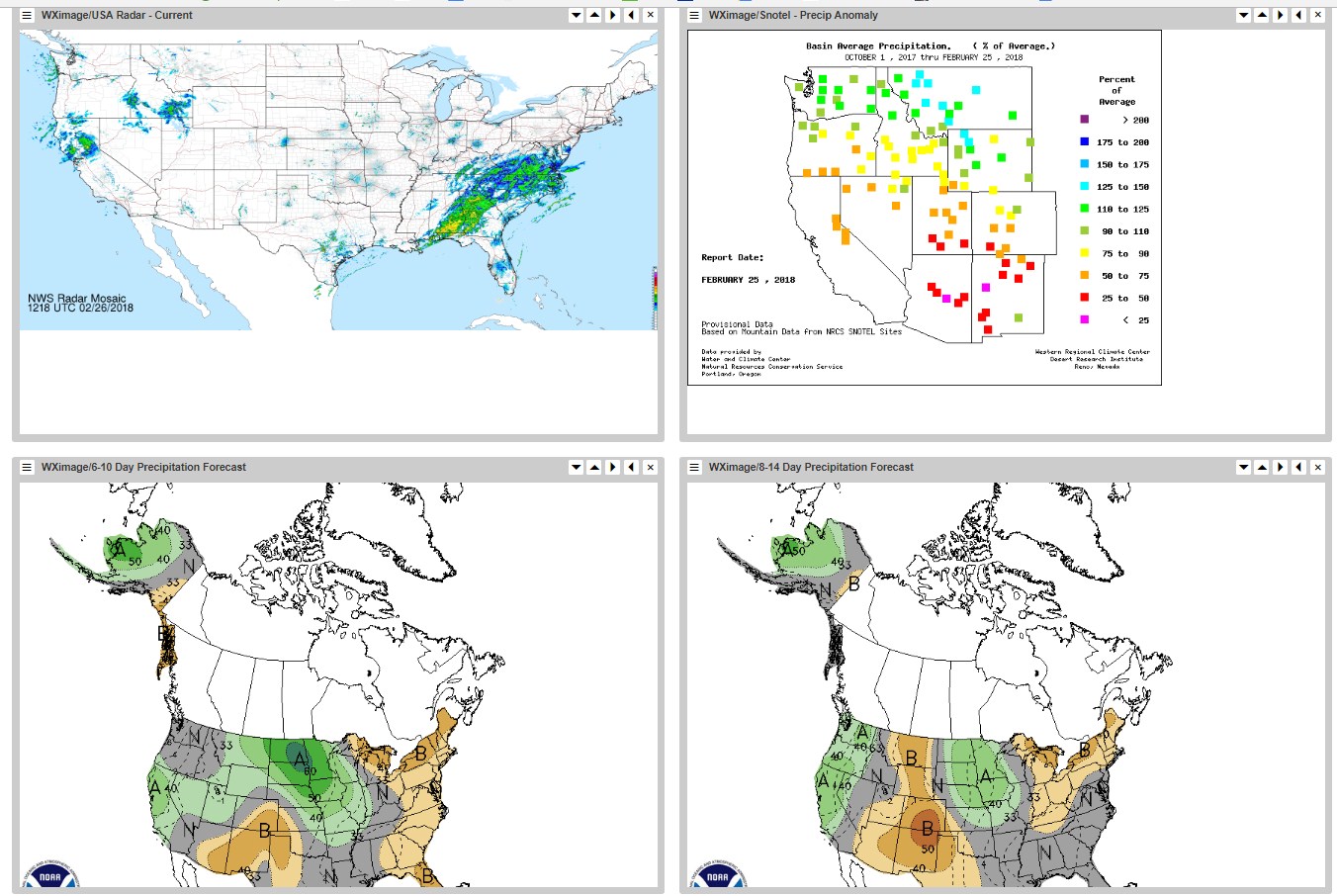 The near-term is dry Northwest and slightly wet inside California, but we find these NOAA plots somewhat misleading. We see significant wet California:

Big is relative, but compared to last week’s outlook it is huge; over 2″ in the Sierra’s, one of the first strong storms in months. But alas, beyond that event there is nothing in the current forecast, and even this storm doesn’t hit the ten-year averages.

The Northwest isn’t dry; it gets some precip, but nothing close to normals. This dryish trend has been sticky, for almost a month the region has posted below average forecasts. 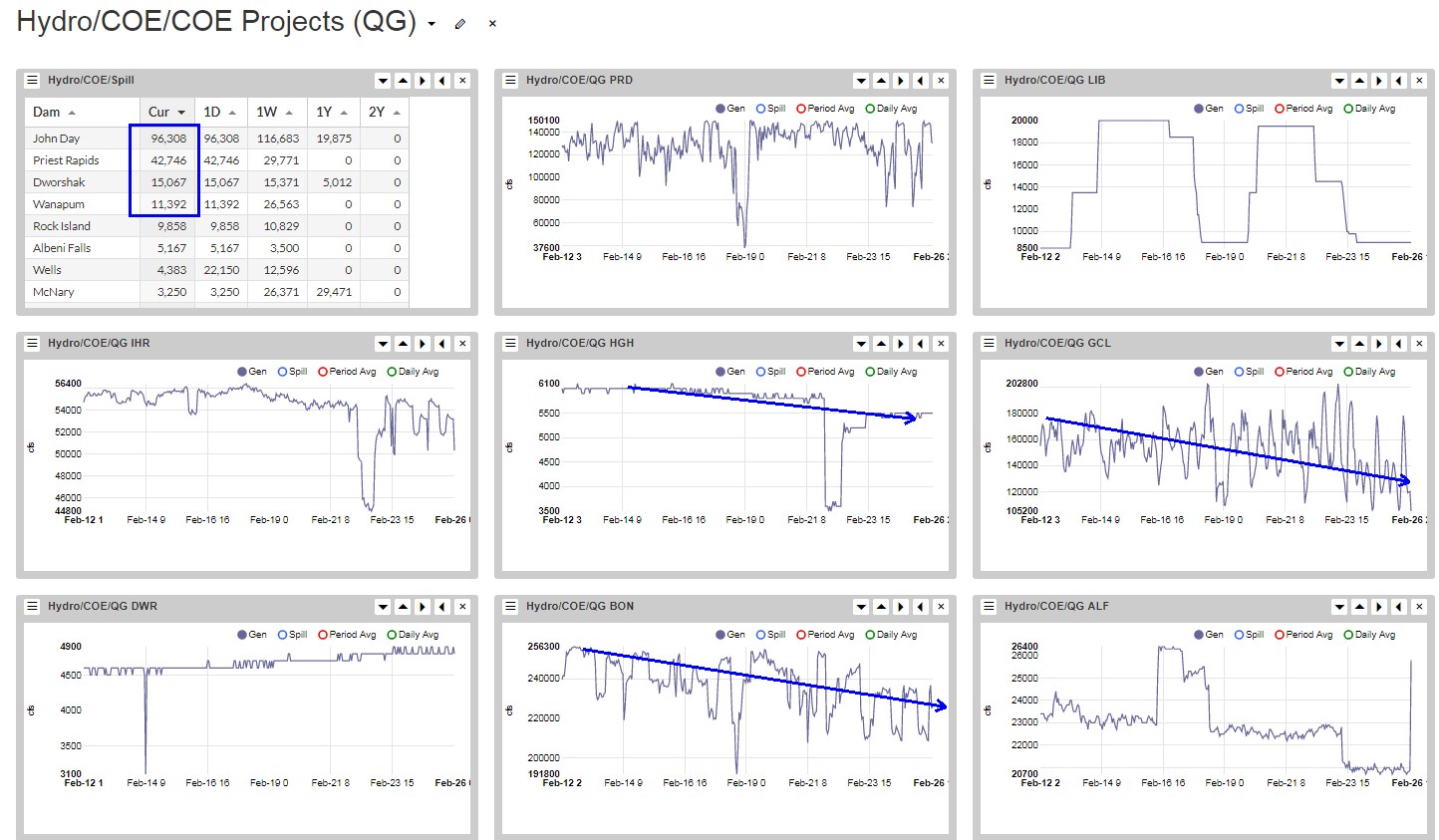 Those dry days coupled with the icy cold weather have cut into natural river flows which are taking a toll on the regulated projects. Flows at Bonneville are off, same with Coulee and Ice Harbor.

Despite continued drafting at Coulee, the project’s output saw a sharp cut over the weekend. Now there is but 9′ to get to its target for doing the drum gate work. With more cold weather coming, and a below normal precip forecast, there shouldn’t be any problem reaching 1255′. It seems BPA’s new problem is getting there too quickly. 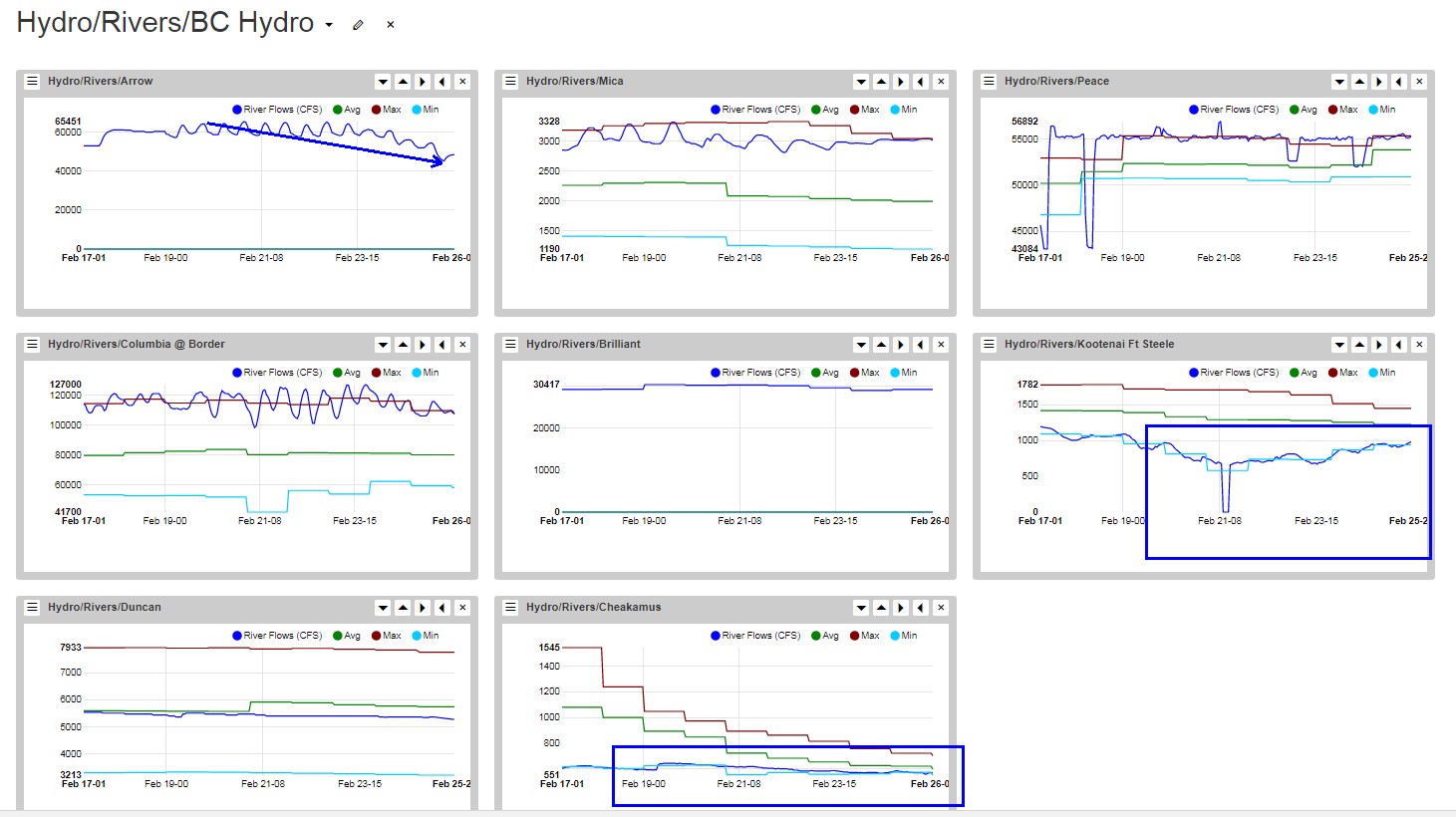 Flows across the border have pulled back, note the cuts at Arrow, off 20kcfs. The Province’s unregulated flows are also bouncing along ten-year lows. 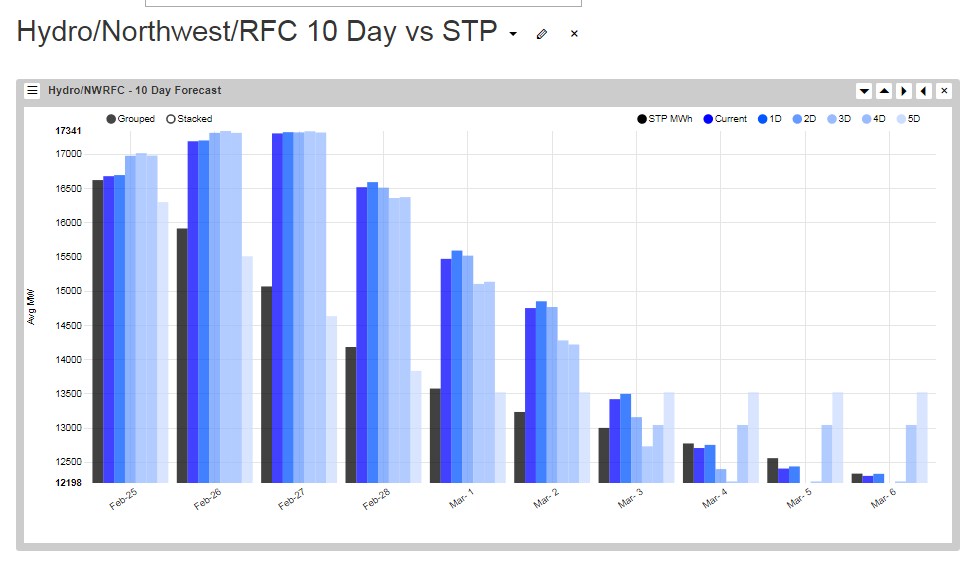 This is Friday’s RFC 10 Day, but check out the bumps versus last Monday’s STP, which may bode for a March bump in today’s release.

Flows on the Northern Intertie were northbound after a week of strong selling into the MidC; indicative of weak weekend prices. In effect, all of that BPA wind ended up in BC’s reservoirs. Both the DC and AC are functionally full, at least in the hours that have strong prices.

Lingering cold and dry casts a bullish tenor to our WECC outlook. Cheap should be bought, moderate held, and rich looked at. More on that in the next post.