Our takeaway from today’s fundamentals was more bullish than bearish, and we also noted the term impact of this recent cold. Gas storage and hydro reservoirs were all pulled hard leaving holes in the term market that weren’t there a month ago. The Northwest has a significant snowpack anomaly above Coulee, but the Snake is looking drier than not. 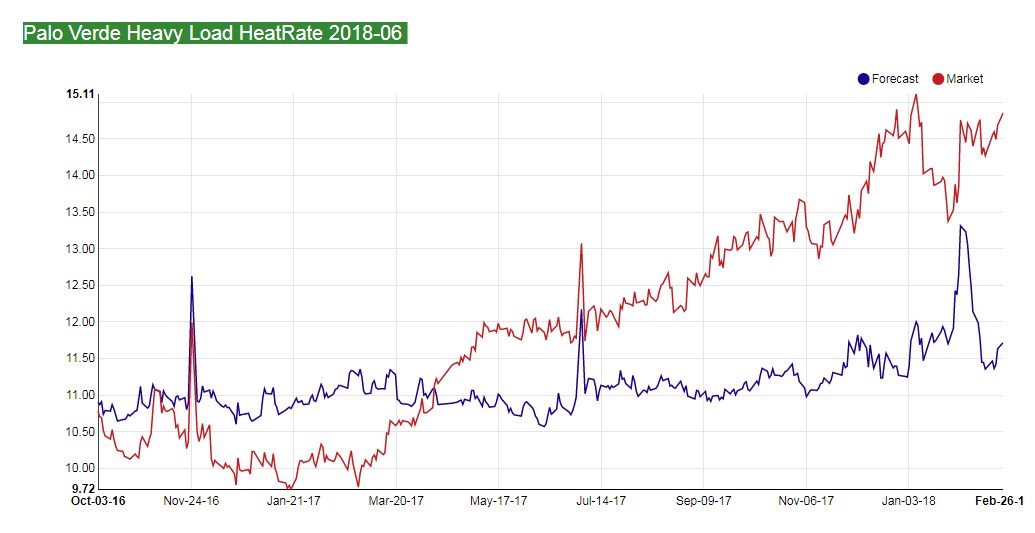 Most term markets are up, especially in the south, which drives an overabundance of short APT recommendations. We’d be cautious about getting too short, not with more cold on the horizon and the holes described above. The Palo June is back to approaching contract highs, but until we see some weakness in cash, we’d stay away from naked shorts. 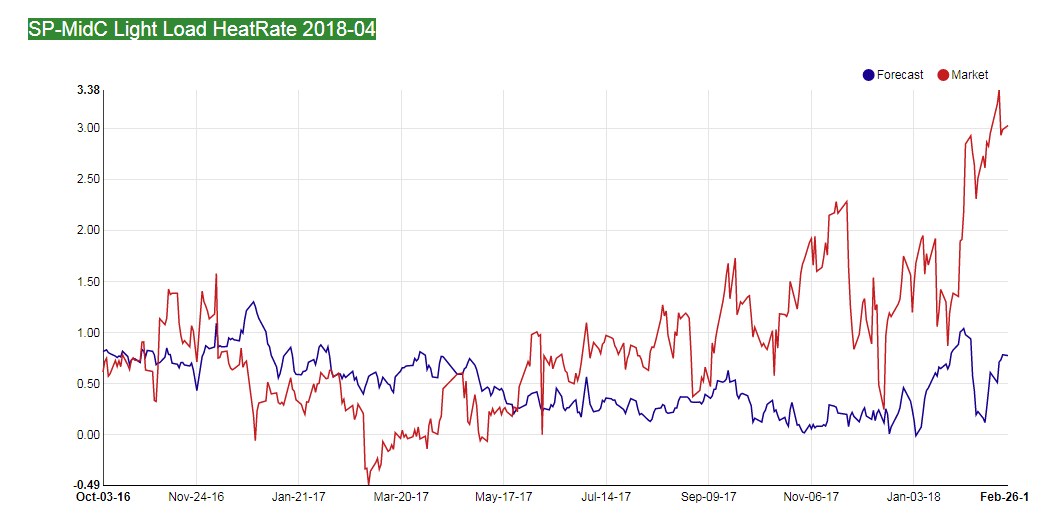 The spreads, on the other hand, are fair game. Here we see the April SP-MidC LL set a contract high. Given the NWRFC’s current water supply forecast at TDA of 112, we can expect a deeper draft than what was published earlier this month. But much of that water has already been drafted, and the difference between 1232 and 1225 is about three days. We’d be comfortable shorting this. 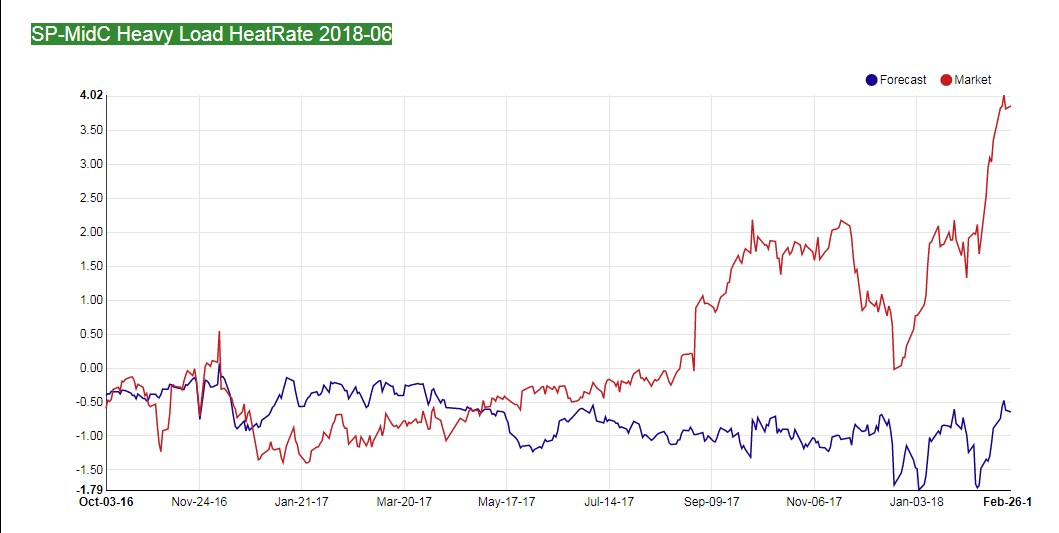 Same thing with the June HL, contract highs in front of dry Northwest. How much of this rally is driven by the recent Socal Gas issues? Fundamentally, nothing changed inside Socal, aside from the gas drawdown, but the Northwest has been dry too. We’d sell this, too. 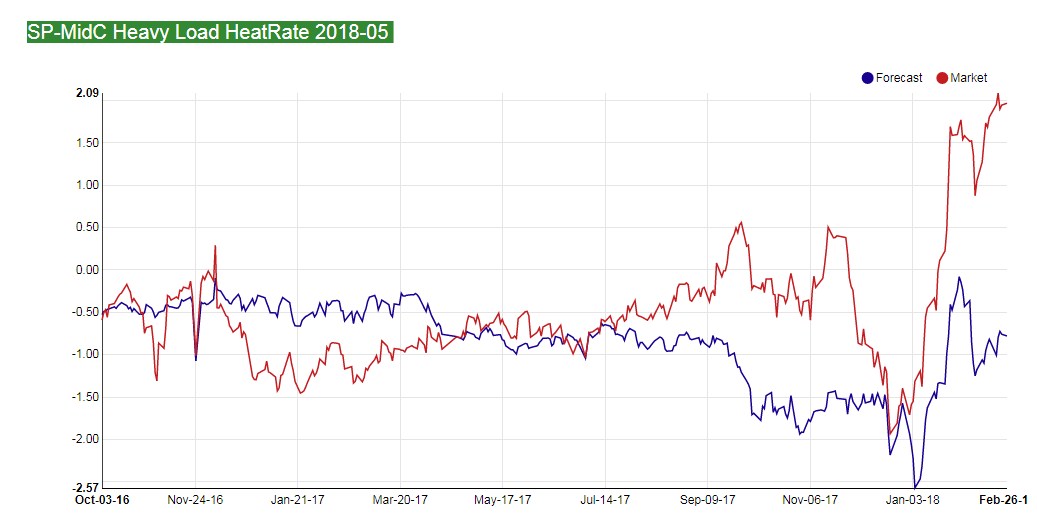 Same trade, pick your poison. If anything, this one is better because odds of big heat in LA are lower in May than June and cold in Northwest is higher. All of May is a refill, plus the spill, and if it doesn’t get warm, there isn’t any water to refill. We’d sell this one, too. 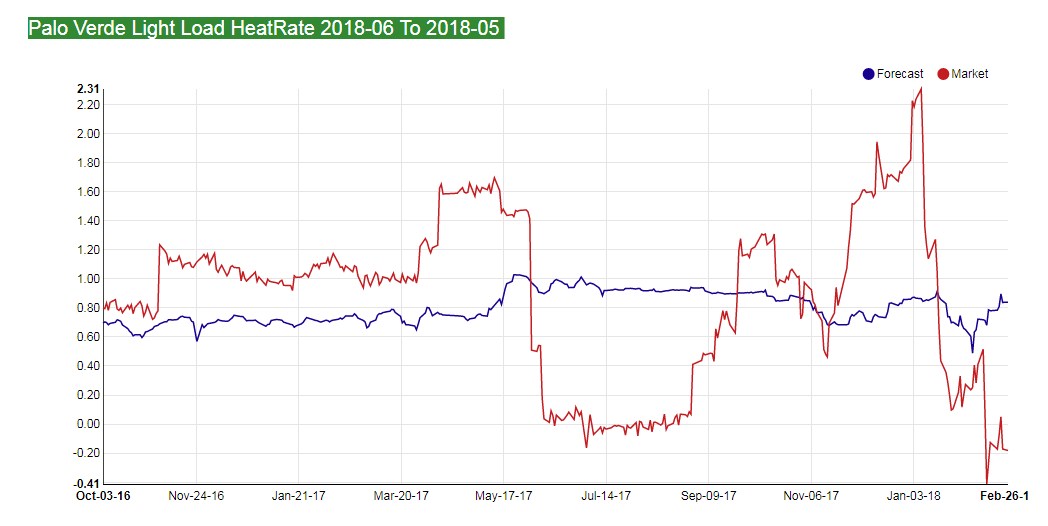 This is odd, the June LL trading beneath the May at Palo? We don’t get it and would buy it. 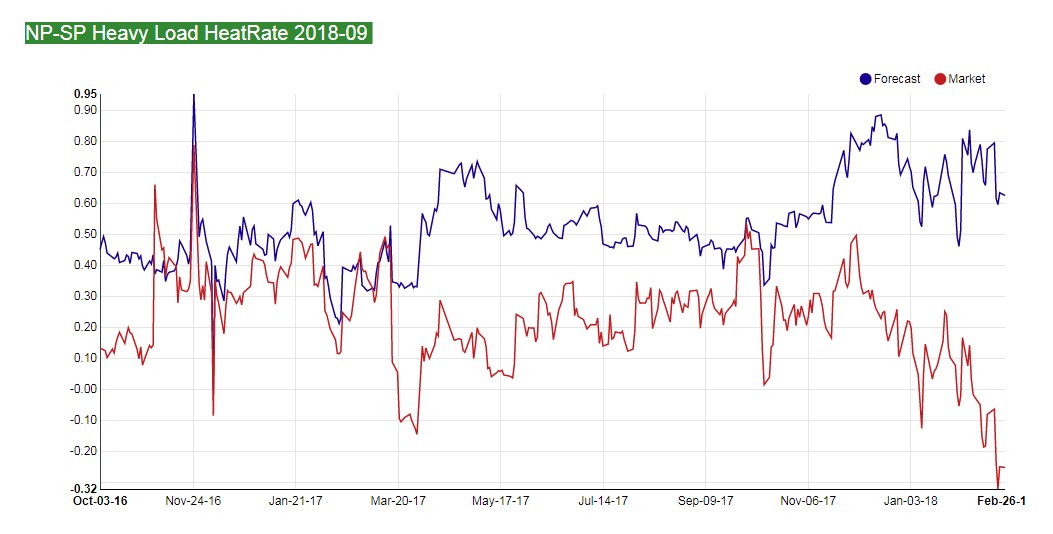 Don’t get this either, the NP|SP Sep HL. NP is where the hydro capacity is, and in a dry year, it will be fundamentally more bullish than SP. Again, probably a lingering impact of SCG’s recent spot gas rally – we’d buy it. 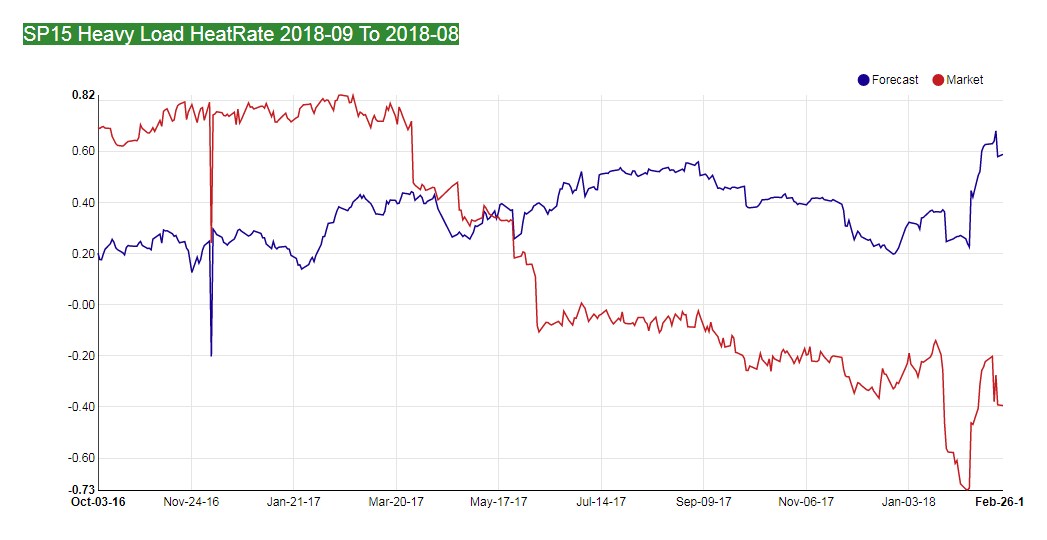 We wrote about this a few weeks back; the Sep was too cheap; now its back to reasonably priced. 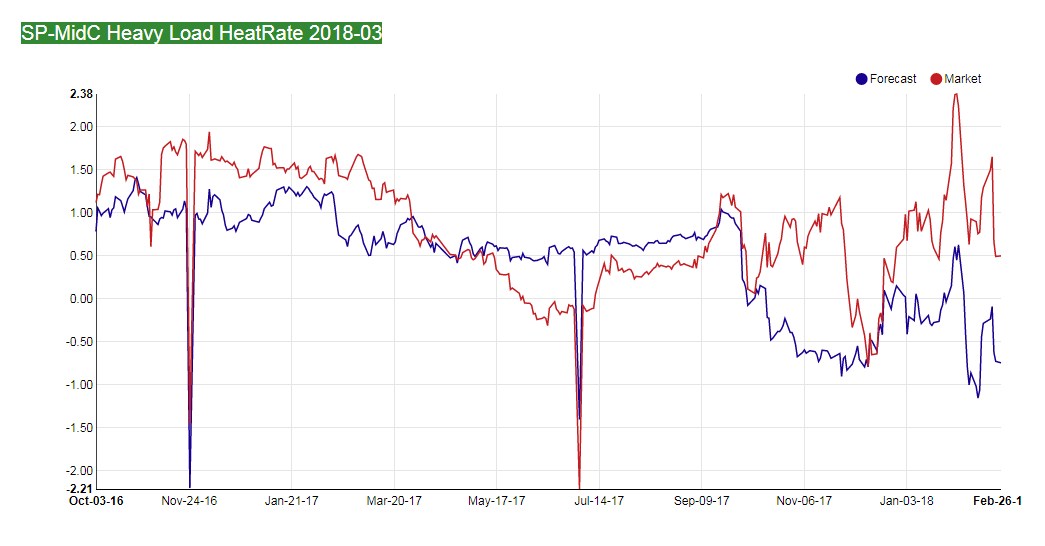 Soon to be BOM, the spread was a sell now it’s just reasonable. 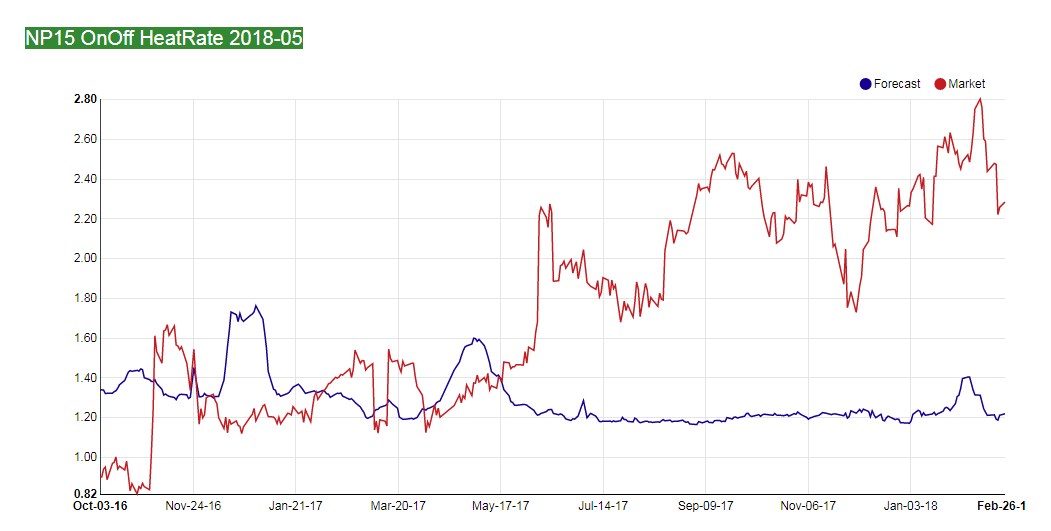 The May NP On|Off has come back to earth and fallen off our radar, it’s more reasonable than not and we’d pass.

With more cold on the way and a dryish outlook, we grow slightly more bullish all things MidC. But Bullish|Bearish are relative terms, relative regarding price, so let’s look closer. 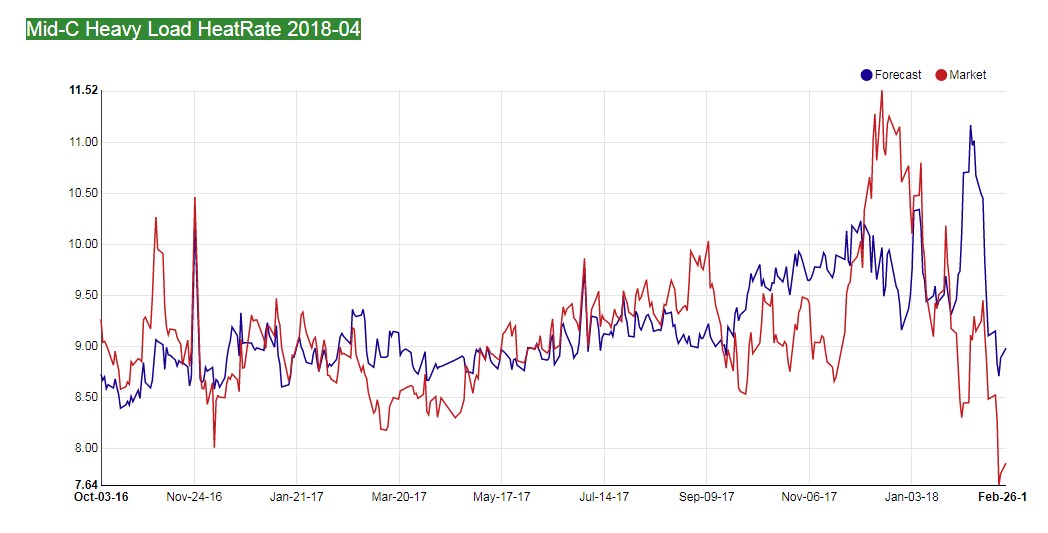 April is getting battered, which doesn’t make a lot of sense, at least to me. Relative snowpack hasn’t moved over the last couple of weeks, but reservoirs have been drafted harder to serve loads. Coulee is now just 7′ from its 1255 target which means some of the water expected in April is gone. Finally, the weather trend is cold and dry, that trend has persisted for almost a month. What happens if it lingers through March? Coulee might be at 1245 by the end of the month and April starts looking cheap. Plus we get the spill, so we’d buy here. 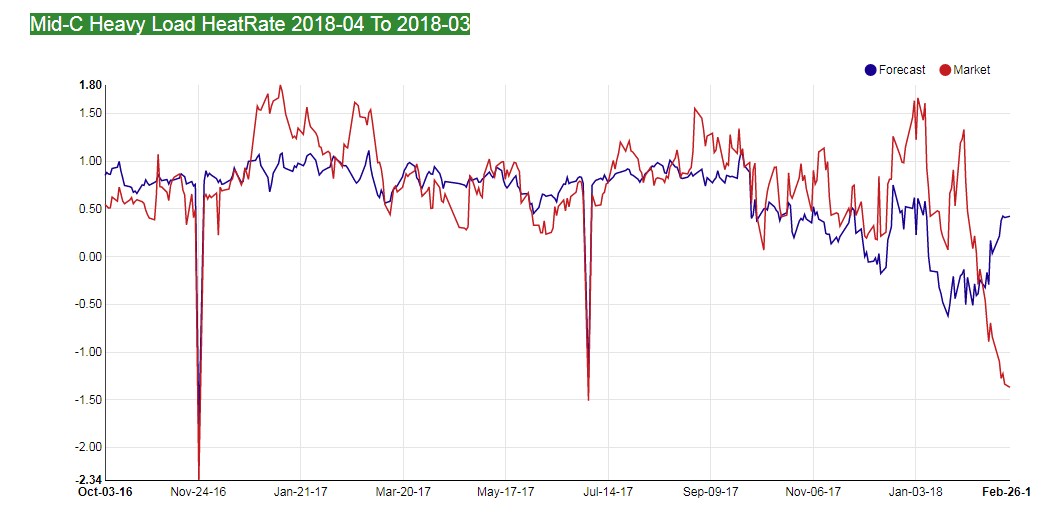 We loved this roll from the short side, now we don’t and would buy back our shorts (if we hadn’t already) and/or go long. 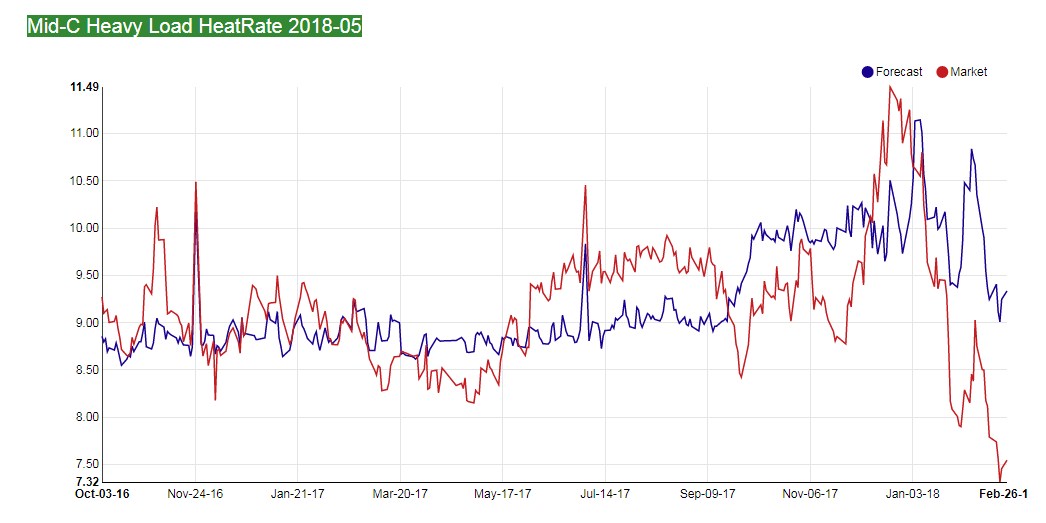 Oh my, you really hate May. For the same reasons we are starting to like April (cheap, early drafts, cold trends, dry outlooks), we also like May. The value will be determined by temperature anomaly, and we know nothing about that today. That leaves us but one strategy – fade extremes, and this is an extreme. 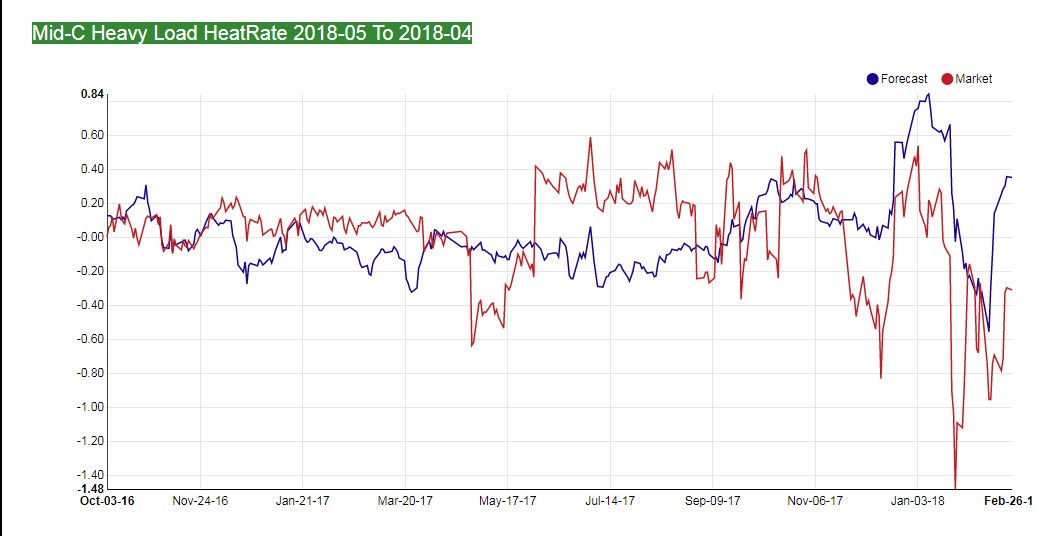 Because both Apri and May were scalped and are now just a bloody mess, the roll didn’t move, and we’d pass because we’re long both of them. 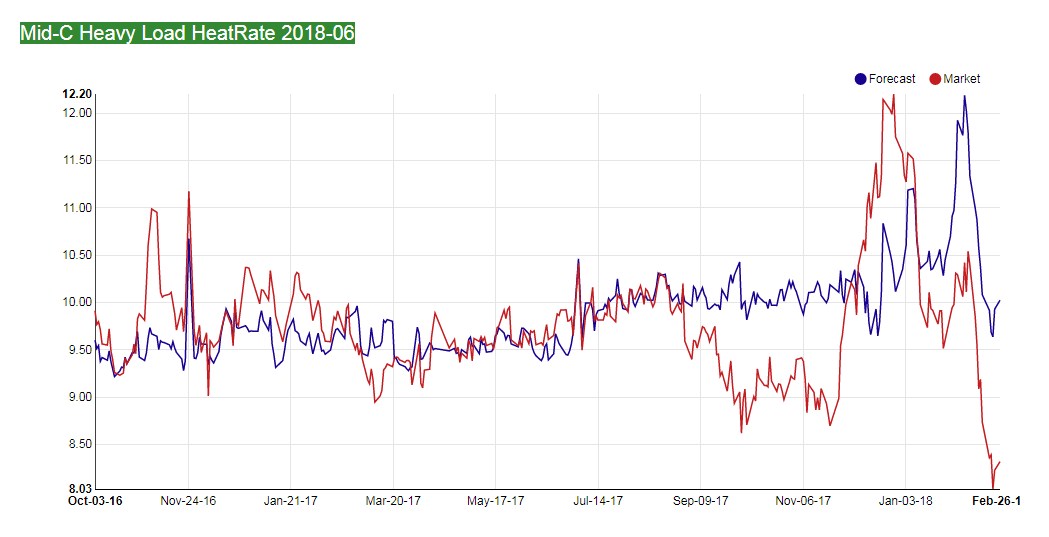 This seems to be a Q2 phenomenon, everything MidC has been destroyed. June is interesting, because you get the Southwest heat and sometimes Northwest heat. This year is different than some of the past because the Snake doesn’t have much snow. All of it is way upstream, above Coulee, and easier to regulate. Again, the value will be set by temperature anomaly, we know nothing about that today, we’d buy extremes, and this is another extreme – low – buy. 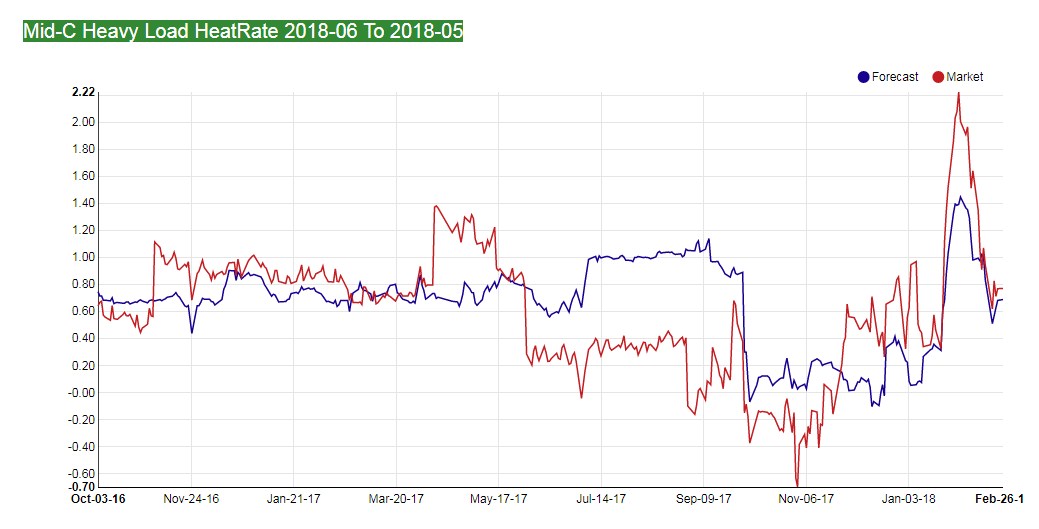 Like the May-April, the June and Mays were equally pounded down, and the roll is just value – pass.

The market woke up to the reality that big snow above Coulee means extended runoff. Without massive heat in June, July will see steady inflows into Coulee; into a full Coulee that is, and what goes in must come out. It isn’t cheap, like the June, and we’d just pass or buy back our shorts. 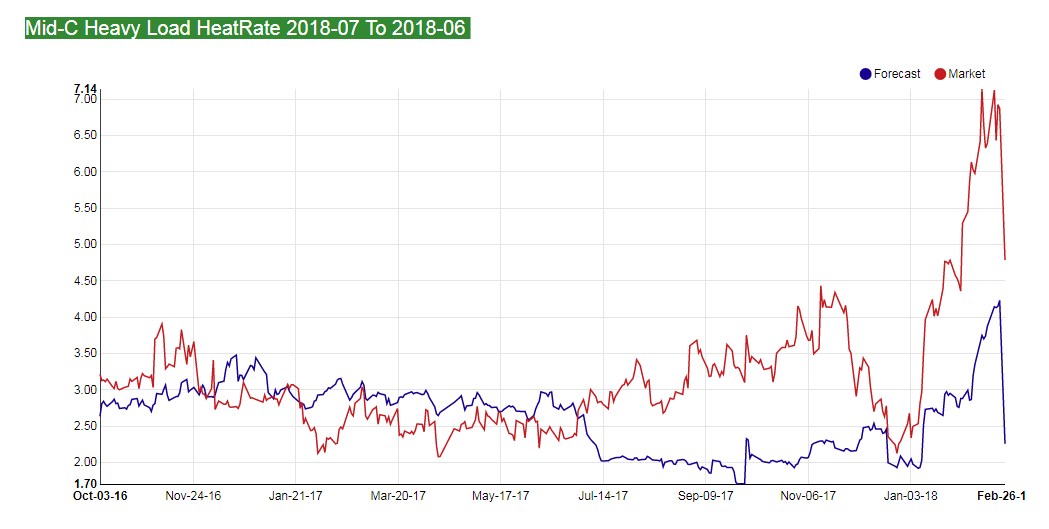 How much of this last day move is gas price? Probably a lot, but now the roll is more fairly priced than it was last week, that was a free short. 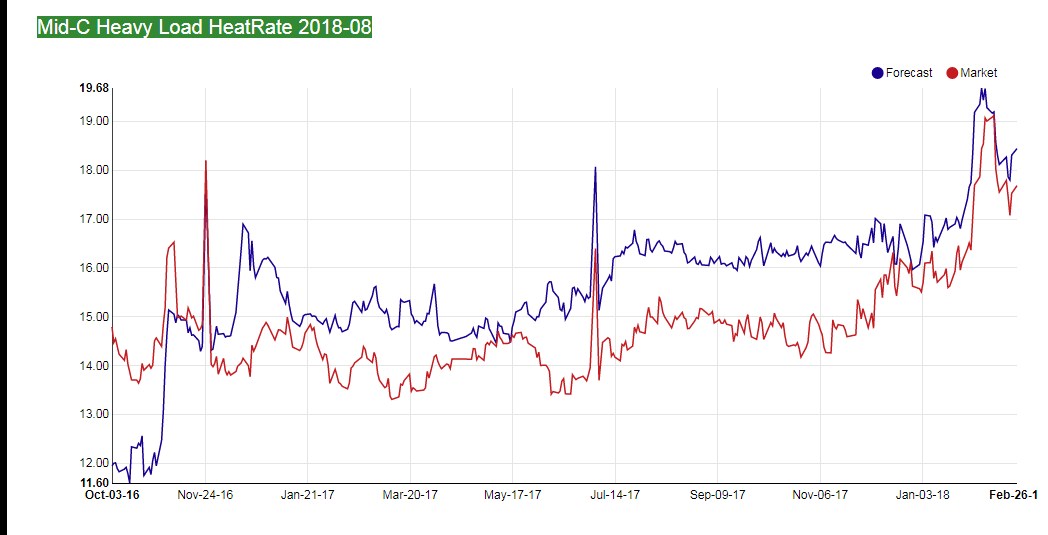 If you think this is a big water year than you should be nervous about August. Though little snow-driven flows will impact the month, your fear should be July cash. Since the strip tanked its not attractive, but we’d be tempted to fade antoher rally.