SoCal Citygate continues to draw all the attention after soaring to new four-year highs yesterday, settling at $19.58/MMBTU.

This was apparently a demand-driven event; we saw no new outages: 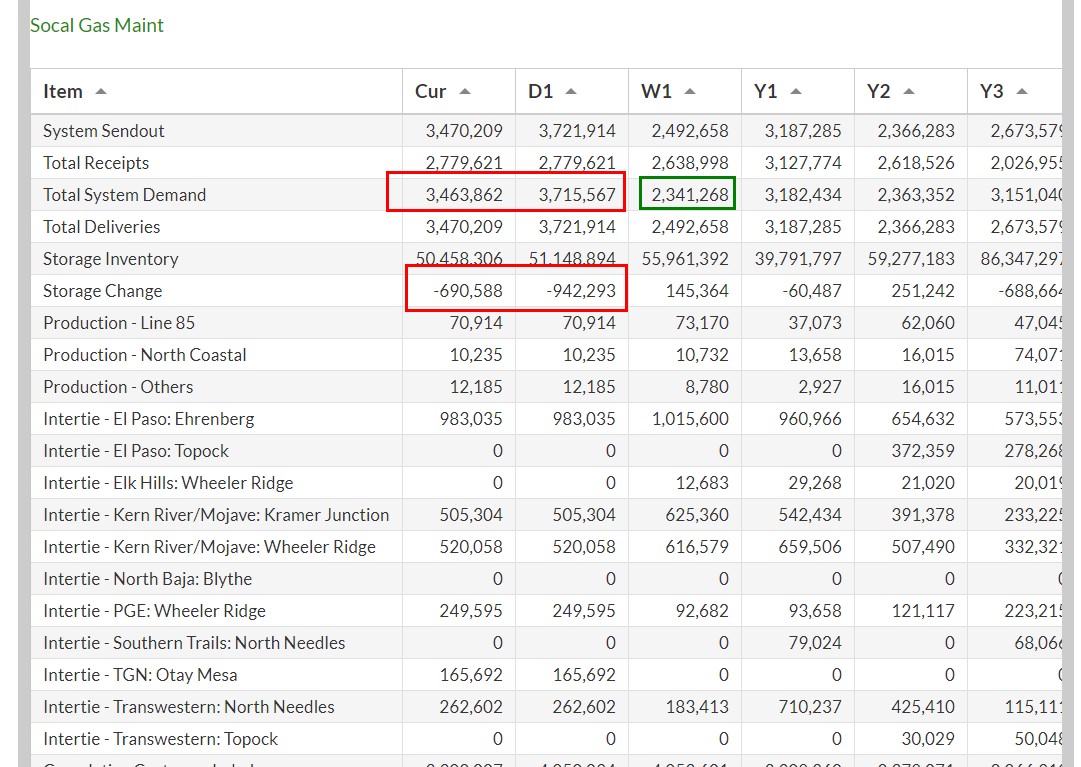 TWP Needles is still flowing, though only at about 35% of capacity. Everything else was flowing. The issue appears to be the surge in demand; note yesterday’s 3.7b Sys Demand. The draws were huge, but not enough. Check out historical draws :

SCG pulled a BCF out, but in the old days they’d pull 2 or more on a big demand day; with Aliso’s withdrawal capacity shuttered in, at least derated, the system is a shell of itself. Here is a comparison of demand:

The system didn’t even come close to its historical peak, but with withdrawals half of what they were in the past, the LDC couldn’t serve all its load, at least that is my guess. The cost for not serving load is $18.92/mmbtu, or so one would surmise.
This is a short-term aberration driven by low temperatures in the LA Basin; just imagine if it had been bitter cold.

The system skated passed a problem, thanks to global warming (or whatever it is that causes 9 of the hottest years on record to occur in the last ten years). Fortunately, the weather is turning warmer, again. 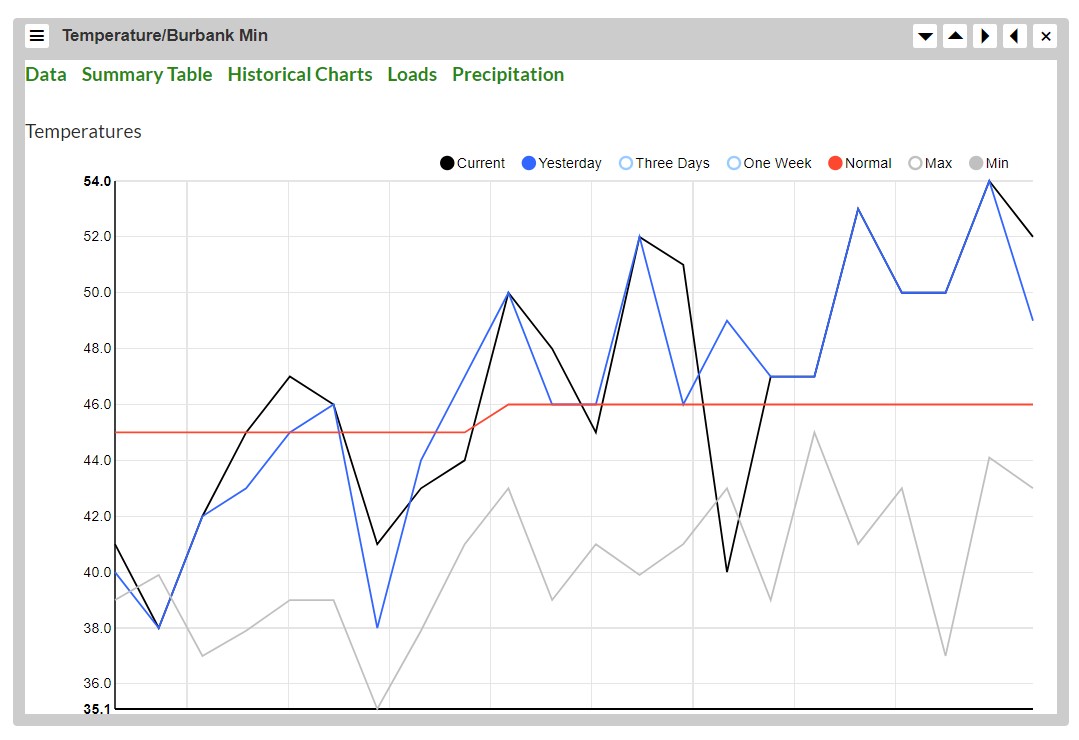 Seems after we get through Friday, the issue goes away. Bear in mind, SCG has ten bcf more in the ground this year than last.

While Burbank’s minimum daily temps are set to return to normal over the weekend, tomorrow will drop to 38, seven below normal and a new 10-year low, potentially putting more stress on demand.

While Southern California makes a relatively quick recovery in daily lows, Sacramento should stay well below normal for at least another week.  This cold spell is highlighted by a low of 29 tomorrow, 13 degrees below normal and four below the previous 10-year low.

Salt Lake City is trending a few degrees warmer than projected yesterday but will stay comfortably below normal as tomorrow dips as low as 21, seven below normal.  The rest of the 21-day forecast suggest a steady climb to above-average minimum temps.

Seattle may have the fastest rebound from below-normal temps in the west as tonight’s low of 27 (nine-below average) will make a quick bounce to 36 tomorrow followed by a close proximity to normal for the remainder of the forecast.

This week’s cold snap brought heavy withdrawals along with it, especially on Tuesday as storage change fell to -865,773 MCF.  Storage has run negative every day since the 17th. 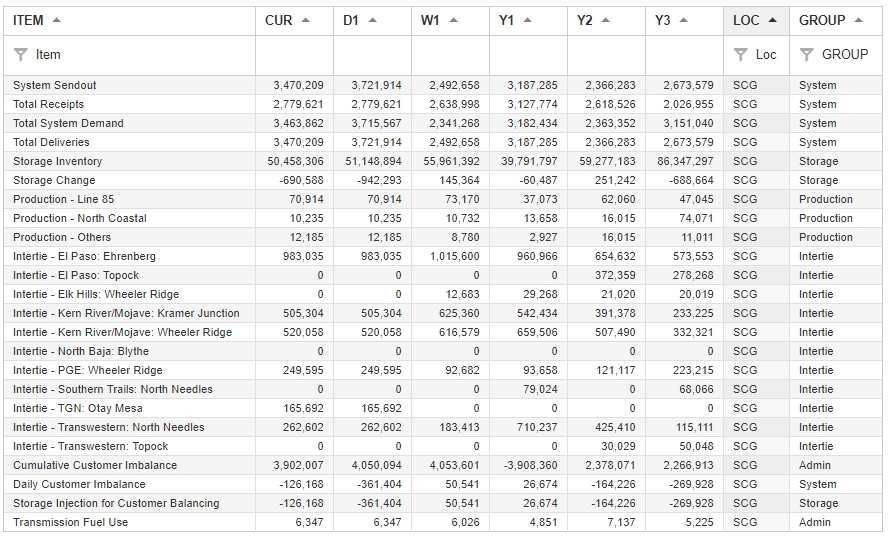 The change in storage from the past few days marked the steepest withdrawals since January of last Year.

As noted earlier, Transwestern: North Needles is online, but remains at just a third of its levels from September. 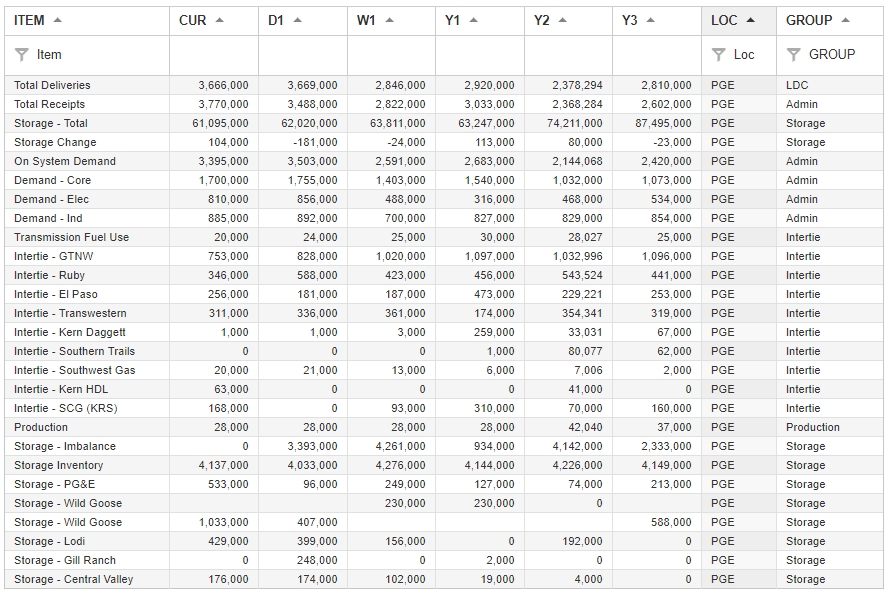 On System demand dropped 109,000 MCF day-on-day as all sectors of demand saw at least some decline, though Demand – Elec had the steepest in terms of percentage (5.3%).  Despite the daily drop, On System demand remains up 31% week-on-week.