Nymex cratered off of the east coast’s heat wave; now PG&E Citygate is premium to Henry. Socal Citygate also was destroyed but rallied off of a bottom.

Funny, because Socal is trading premium to PG&E in the spot market; also note the sharp rally at Stanfield and Sumas over lows last week.

We had hopes for seeing a firming of cash and saw a slight bump in the DA LMPs, emphasis on “slight”. More telling is the lack of congestion, reflective of an overall tightening across all the hubs. 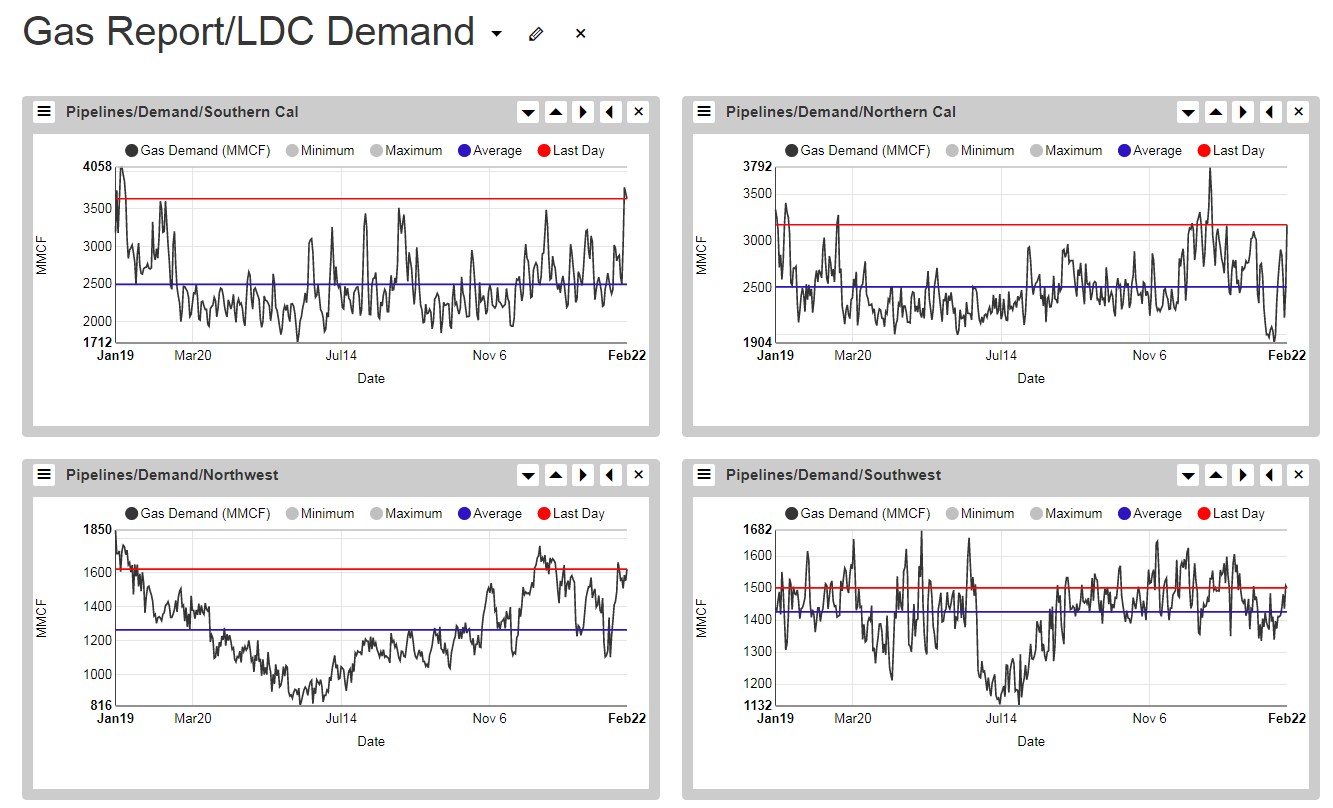 Gas demand soared at every WECC hub, but more so in Socal than anywhere else as it set winter highs. We’re surprised the Northwest didn’t move as much, given that Seattle set its coldest days of the winter.

Check out the demand rally in both PG&E and Socal’s systems, but look at the modest move in PG&E electric versus the 500 MMCF in Core. Socal’s demand is up 800 MMCF from last week. 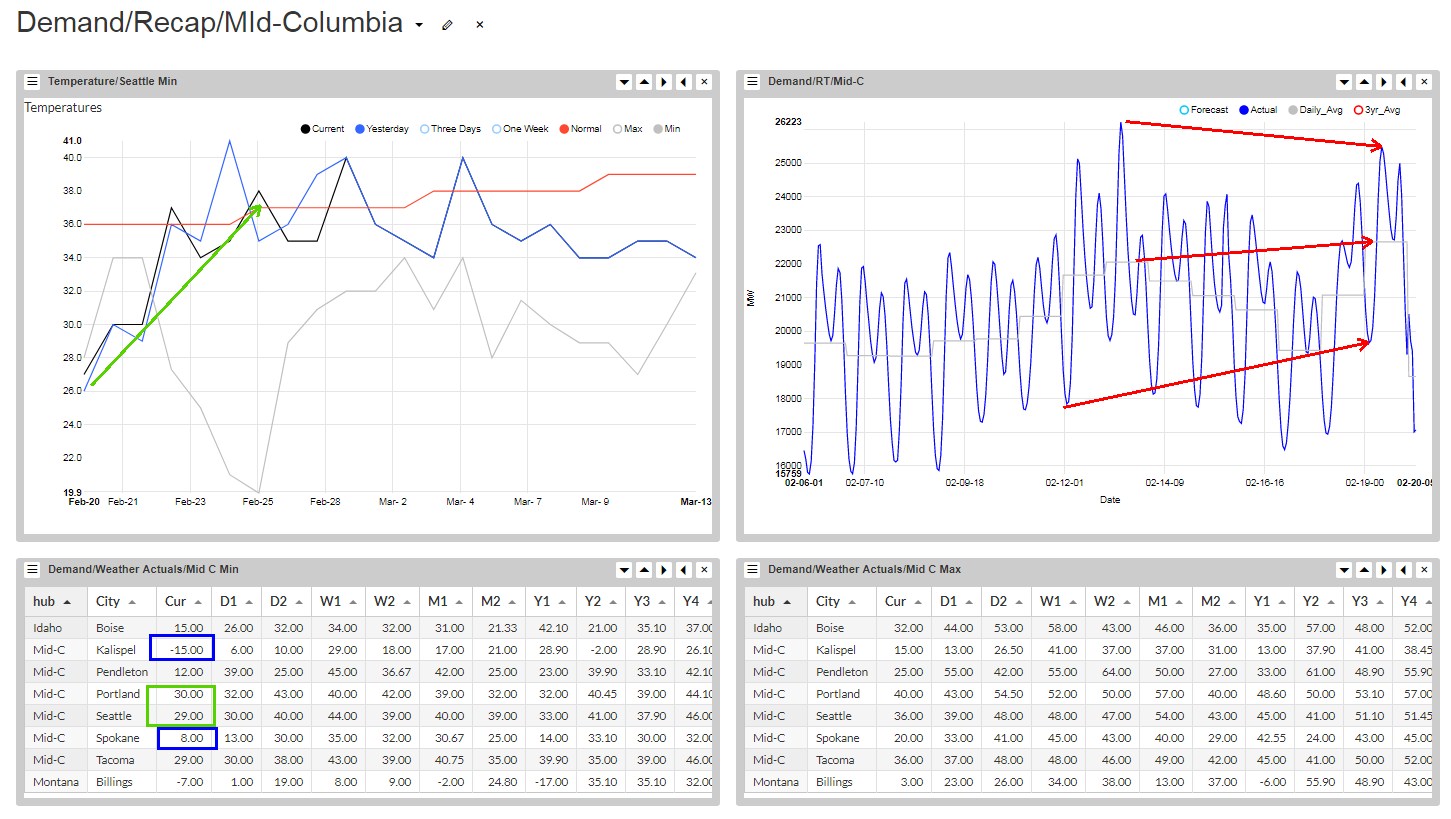 Demand didn’t soar as much as we thought it might, but then yesterday was a holiday. The min demand, however, rallied hard, as did the average. The realized lows were not as low as the forecast suggested last week, Seattle barely broke 30 and was expected to post the mid-20s. 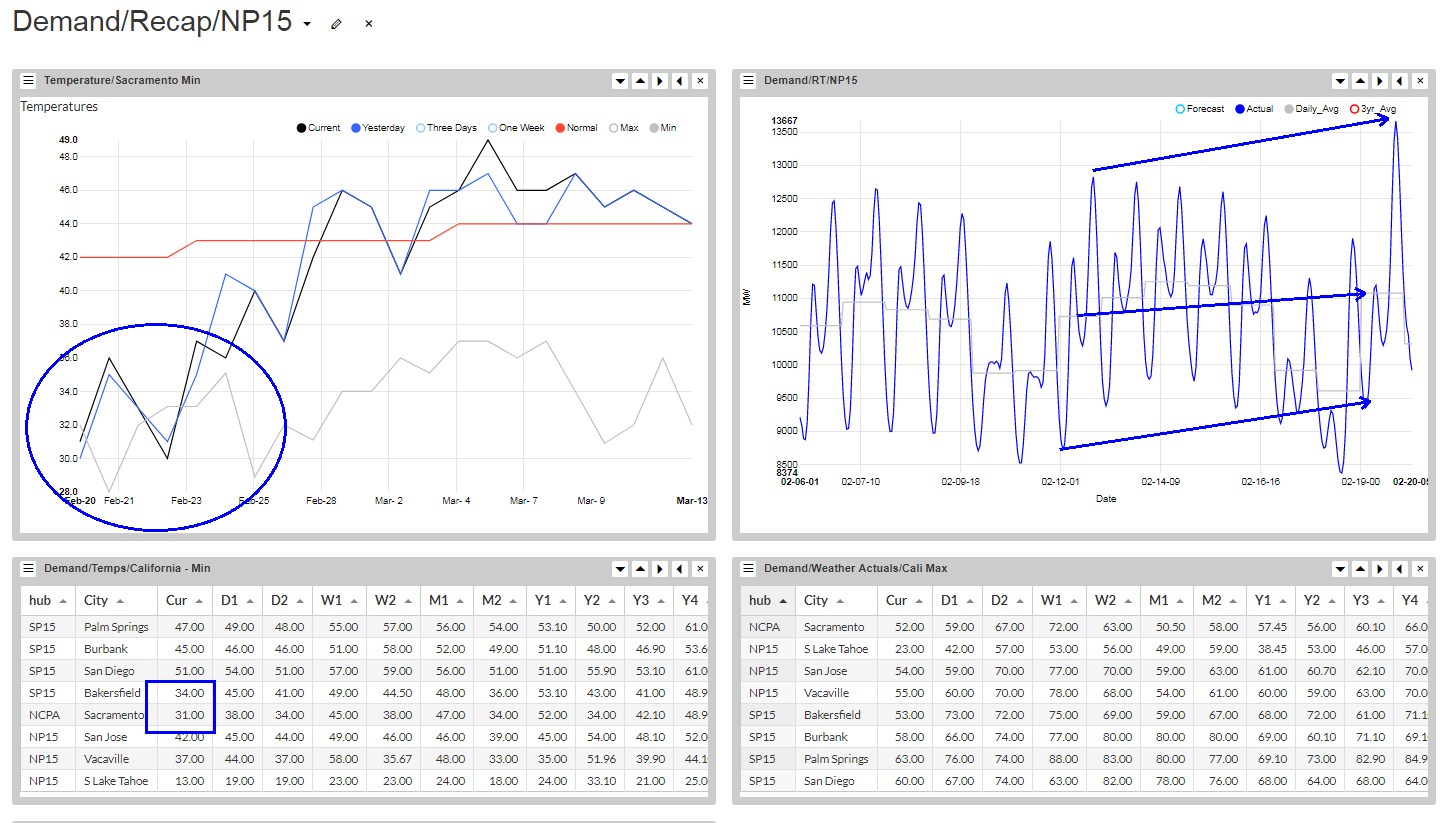 NP’s demand rallied harder than the Mid-C, which one would have thought the more gas units would have fired up; one would be wrong.  NP’s cold weather lingers longer than Mid-C’s. 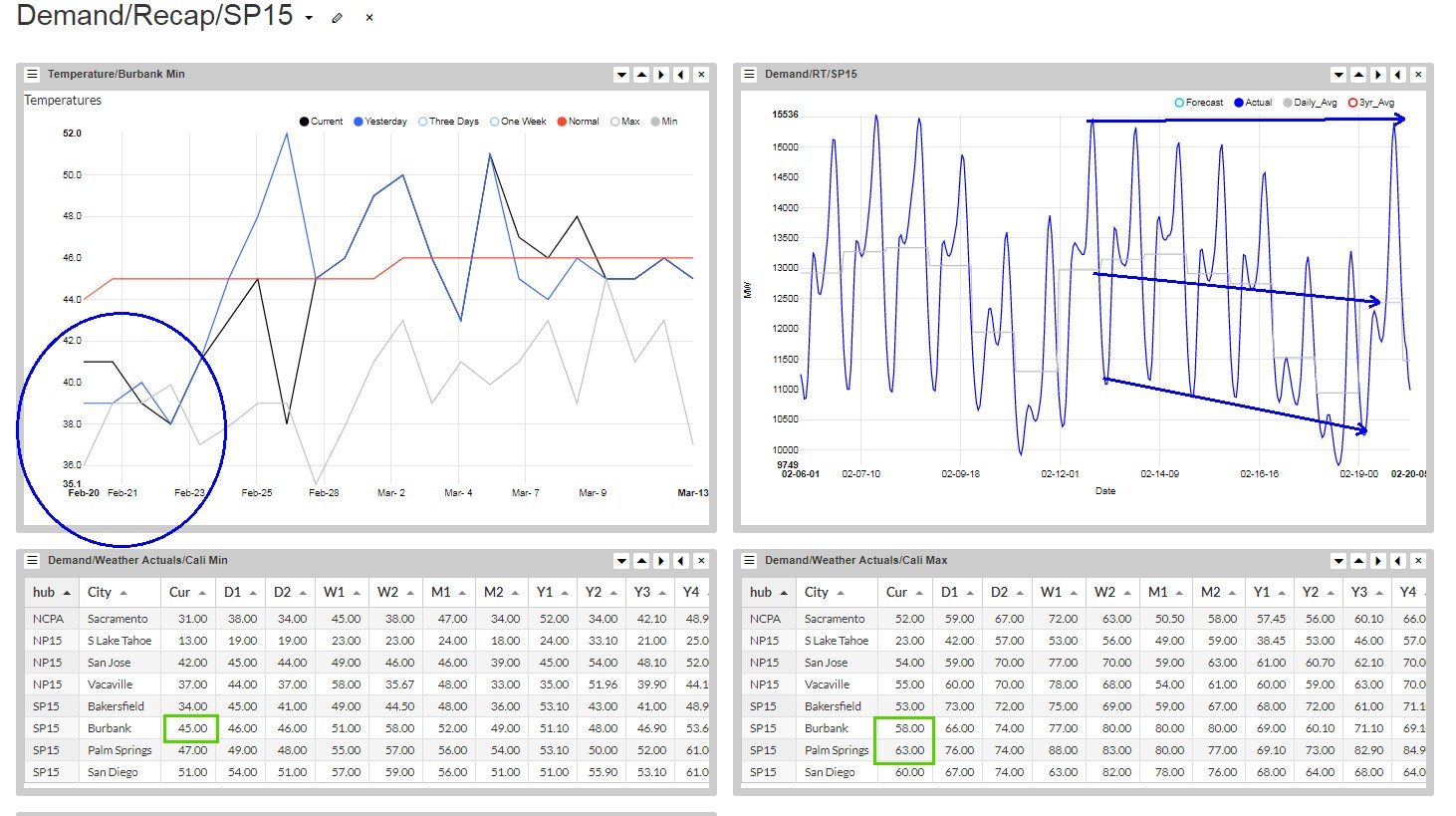 Gas demand in Socal may have soared, but power came off; I guess when it’s in the mid-60s everyone’s HVAC becomes the screen door. The cold anomalies, like NP, linger. 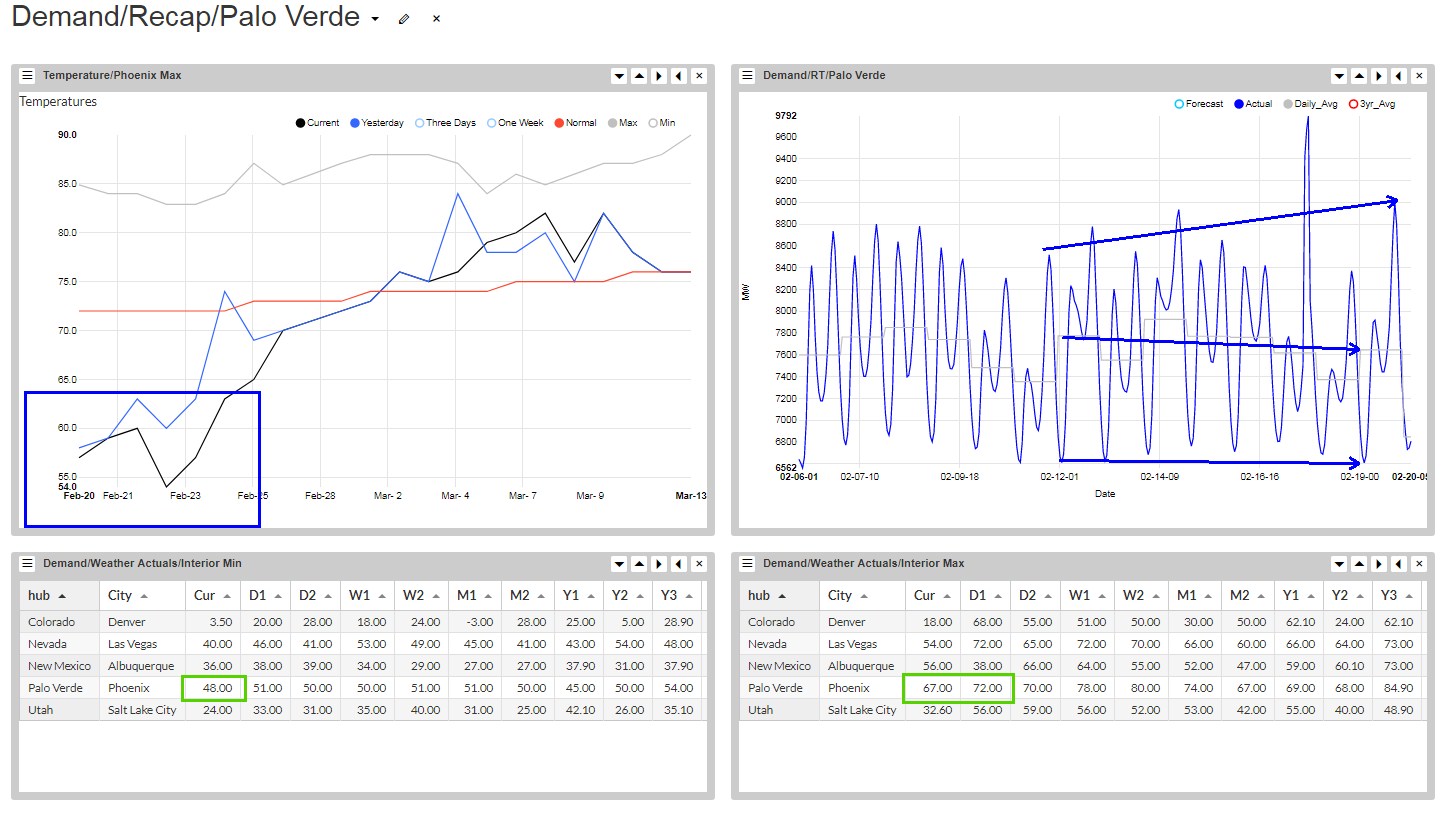 Peak demand in Palo rallied, but average loads were off; same issue as SP,  screen doors. 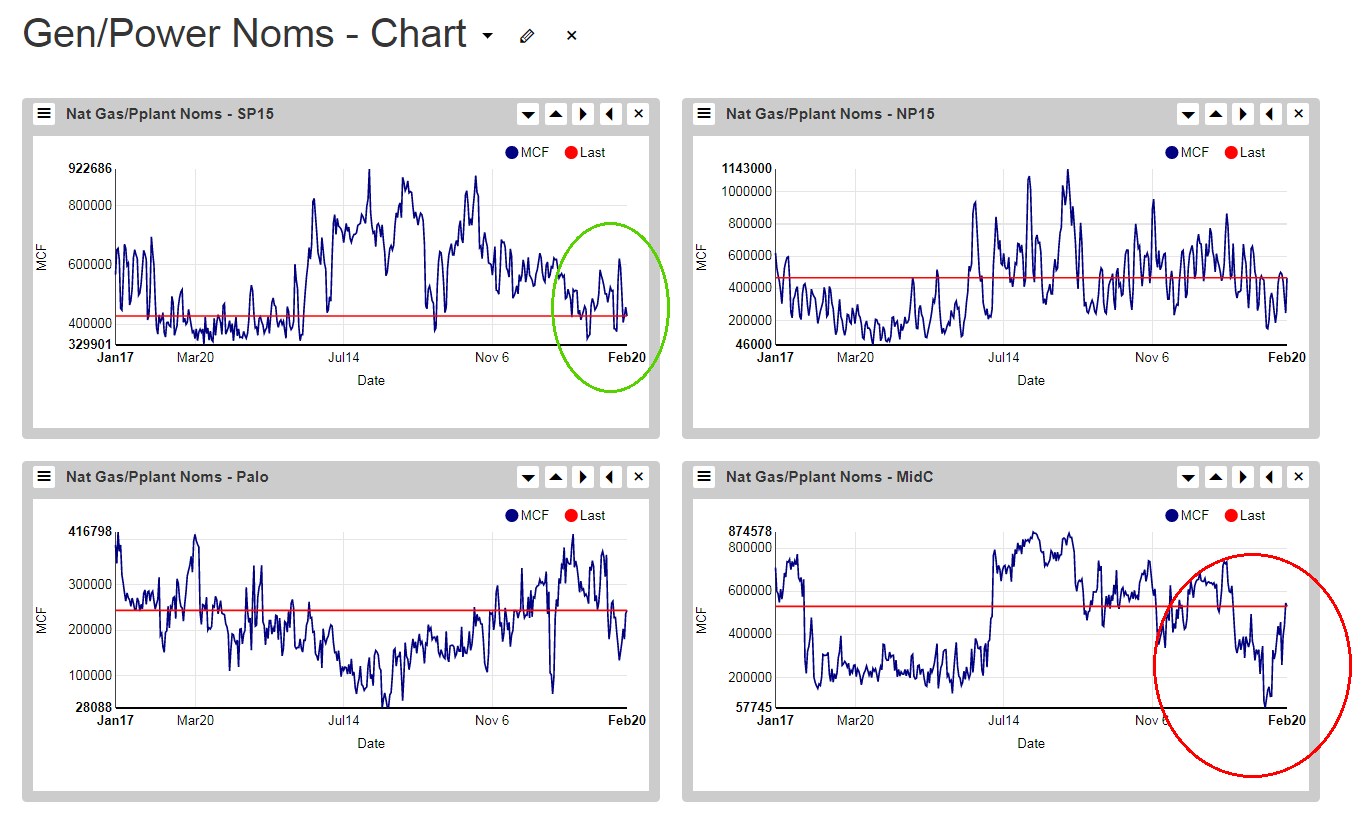 SP’s gas noms actually fell while the Mid-C’s sharply rallied; NP and Palo yawned their way through the “cold-snap.” 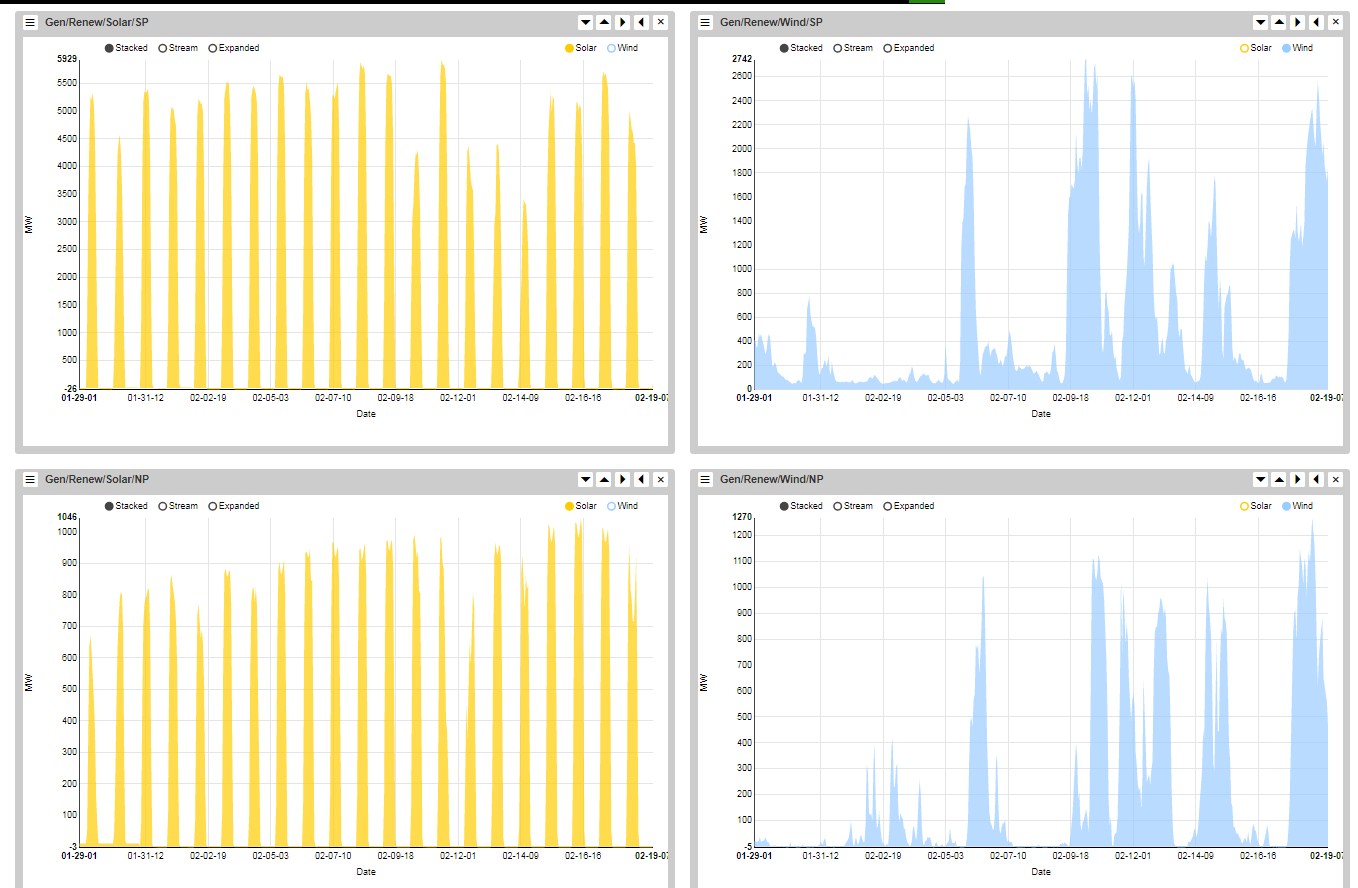 Hide the pea. As wind rallied in the ISO, the solar was just backed down, rendering minimal net increases in renewables. 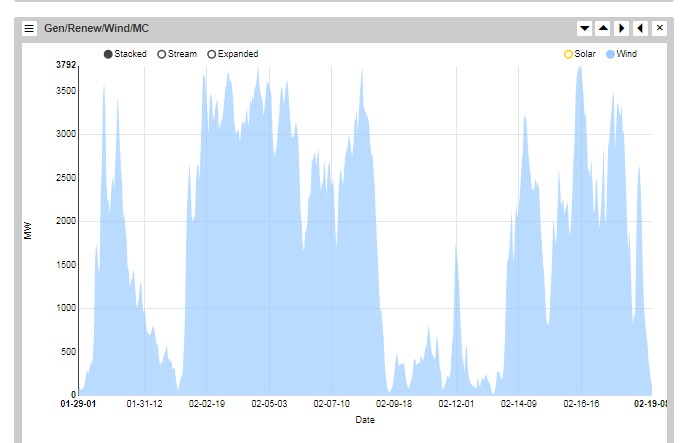 Blew hard in the Mid-C, which blew for the longs. 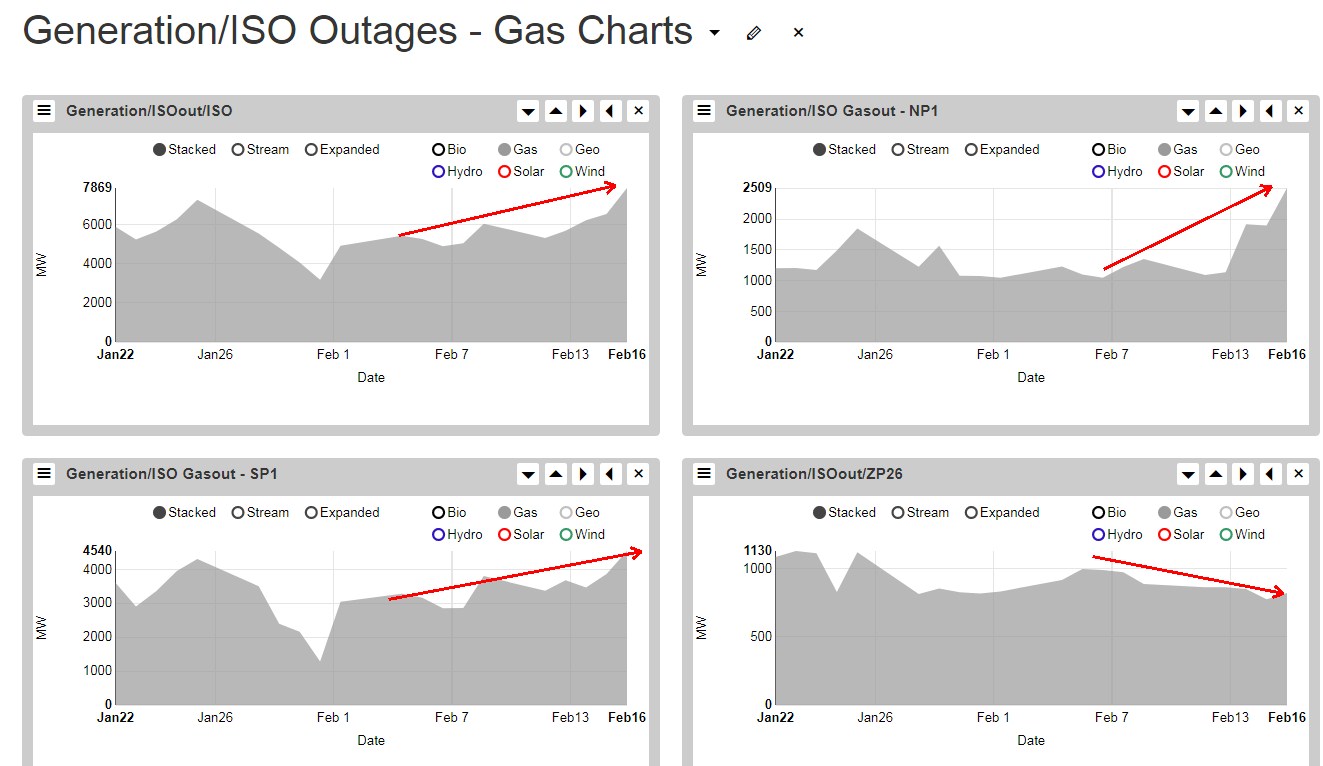 More gas units were taken offline inside the ISO, but we already demonstrated that doesn’t matter; too much idle capacity in both NP and SP. 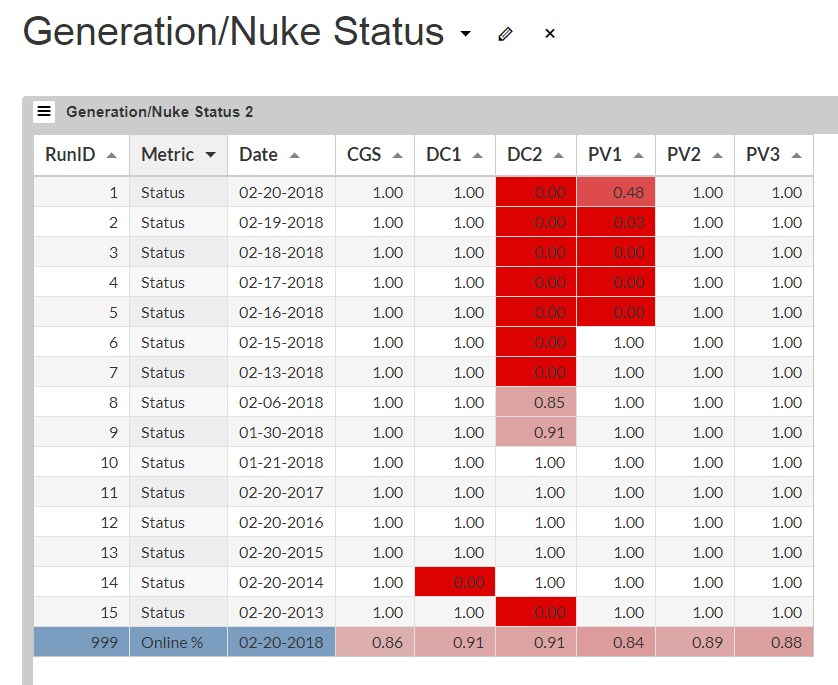 PV #1 tripped over the weekend; now it is ramping back. Diable #2 is still out for its refuel. 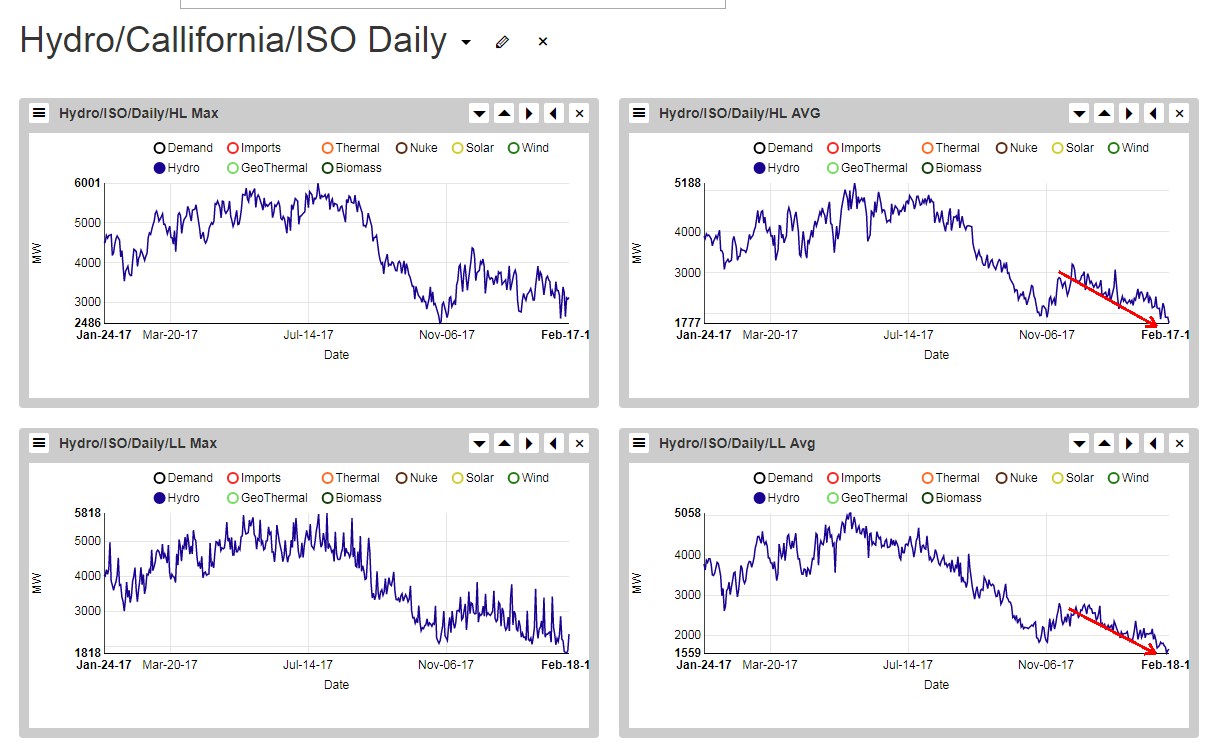 Despite the cold weather, the ISO’s hydro didn’t move, in fact, it continues its downward slide, driven off of the extended drought. Though that is changing, slightly:

The right side chart looks impressive until you look to the table on the left and realize the state is getting but about 30% of average precip for the next ten days – at least it isn’t zero like it has been for the last month. And the good news for our friends in Kalistan, the governor will announce its ok to flush for a day or two.

The Northwest remains dry, a sticky trend which has persisted for nearly a month. There remains a significant anomaly above Coulee, but the Snake is looking more dryish than not. 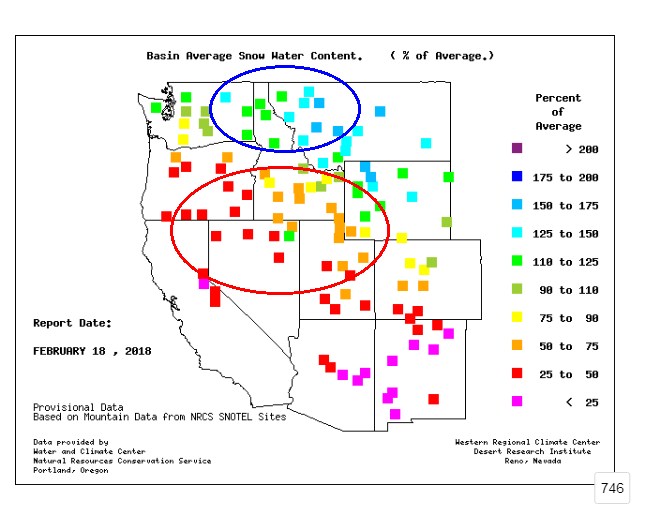 Tale of two water years, but with the most recent trend of dry, we are growing ever more bullish on the Northwest. Trading the water year is a slow-motion event; every dry week can only leave you more bullish than the previous week, now we’ve seen several dry weeks in a row. Still, it’s all relative to price, and we’ll be looking at those markets in a post to follow.

Though total precip has been below normal, the snow depths continue to rally above Coulee. Check out the builds on the Flathead and Clark Fork. Also, contrast this water year with 2017 on the Snake. 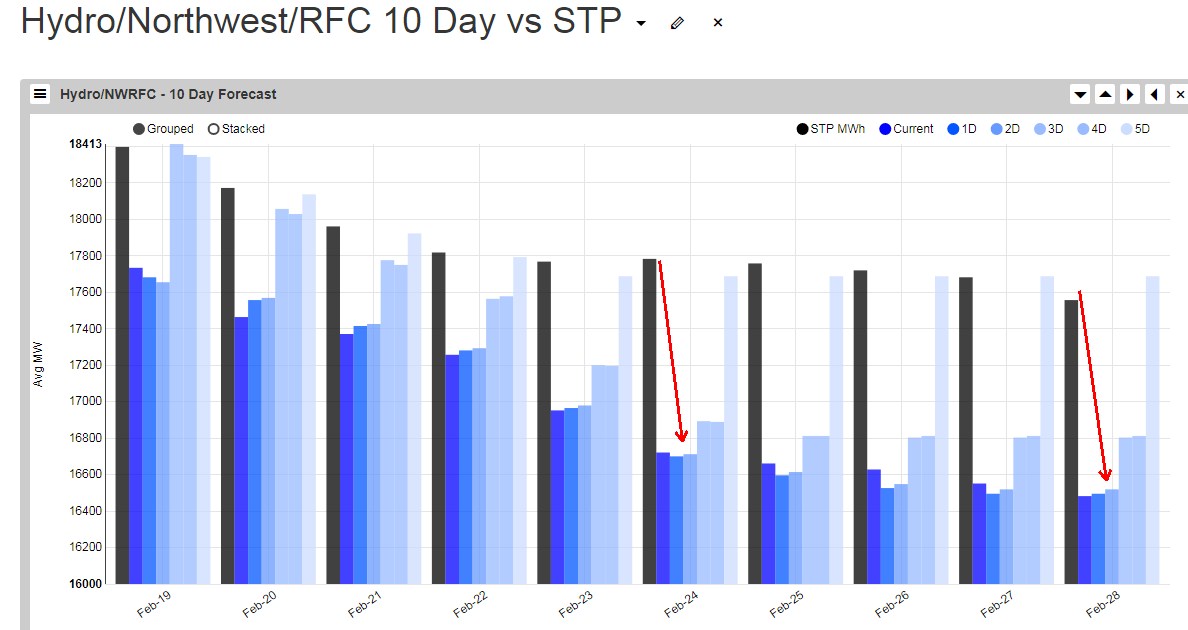 This caught our eye, the NWRFC’s Ten Day Forecast vs. STP. These are massive cuts in energy equivalents, like 1500 aMW, and we’re not sure what’s driving this.  Perhaps its the extended dry, maybe it is the bitter cold that is freezing the rivers, but whatever is the source it is cash bullish. Today is the STP; we’ll be anxiously watching to see what twists and turns arise.

Though we are still a few weeks from the March Flood Control, it remains a wild card. With anomalies falling on the Snake, but building above Coulee, one would expect little change  and with Coulee drafting to a 1255′ target for drum gate work there may not be much of an April draft.

The project is already at 1269, leaving just 14′ feet over the next 45 days. Should this dry weather hold, we could see an end of April target more like the low 1240s versus the current 1232, all of which means April suddenly looks interesting from the buy side. 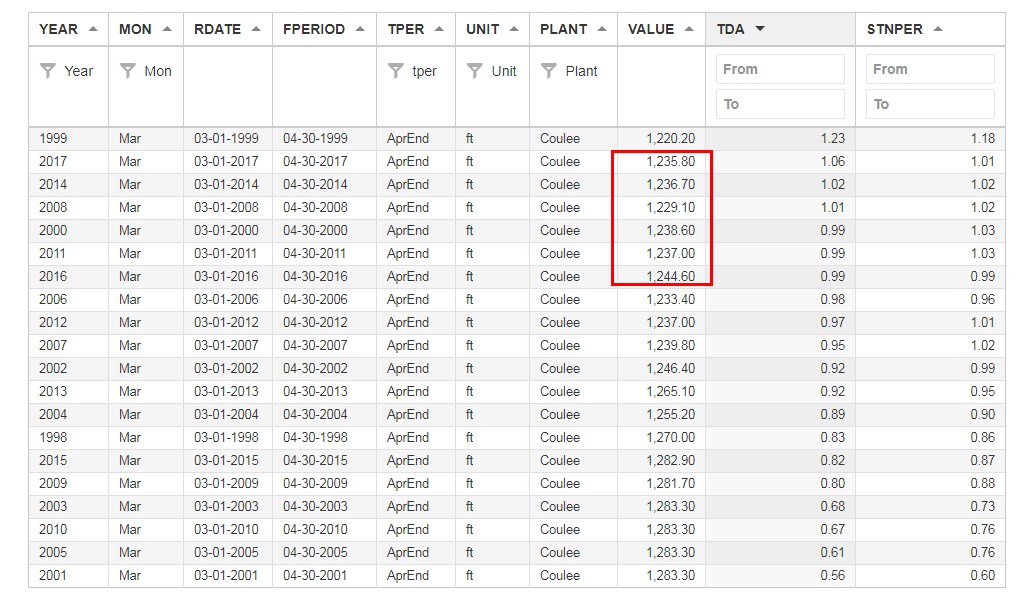 Though history would suggest something more like the high 1230s; but still that leaves only 16-18 feet of draft in April, which as you all know, is the start of the spill. On another note, we added a new report to our flood control library. 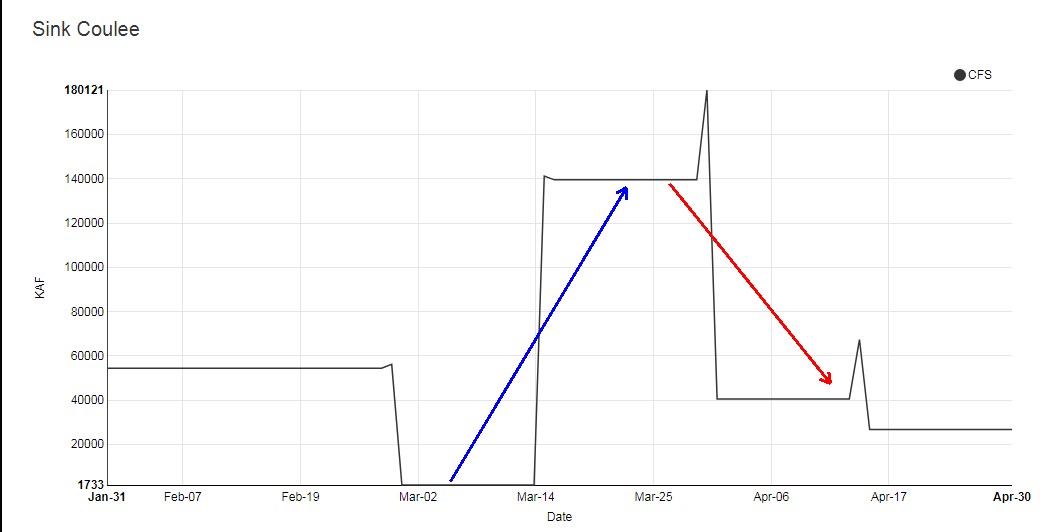 In this report, we first converted the draft targets from KAF to daily CFS, then aggregated all of those flows above Coulee, including Coulee, to render the above chart. For example, if we know Mica has to pull 2 MAF, and Arrow and Duncan each 1 MAF, and Libby and Horse a Half MAF, we can then back into the Flood Control related flows from those drafts. In the plot above, we aggregated all of the above to get a daily plot of expected inflows to Coulee, from the draft.

So, though Coulee doesn’t draft hard til April, the upstream projects are mostly done by the end of March. The net effect is a surge of water from March 15 to March 31. 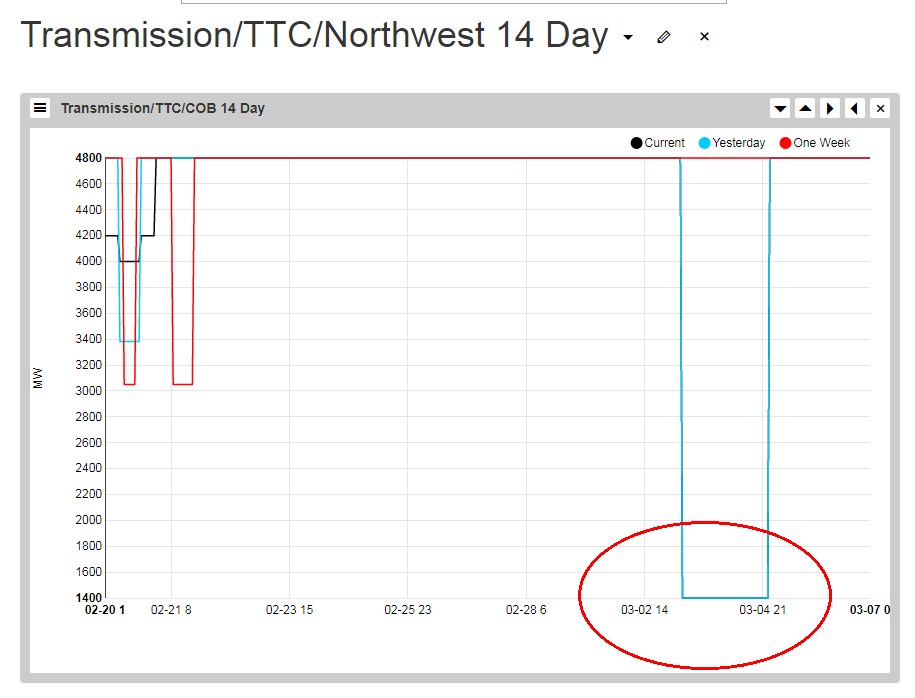 This is a new AC outage, one that wasn’t in BPA’s 14 day, though it was in the long-term.

BC was a strong seller yesterday, reversing its buying trend. All of the Northwest sold into the ISO  in all but peak solar hours. ZP exported into NP and hit TTC several hours and Palo was stingy with its energy, off about 500 aMW in exports to SP.

The cold wasn’t that cold and had a bigger impact on gas than power, but the lingering dry weather, coupled with the cold, has tightened up the MidC. We’ve grown a shade more bullish towards the MidC but must look at market prices to draw definitive conclusions, which we shall do so shortly.