The WECC’s cash outlook just got a lot more bullish, at least from Monday through today, off of extended dry and sharply colder temperatures. 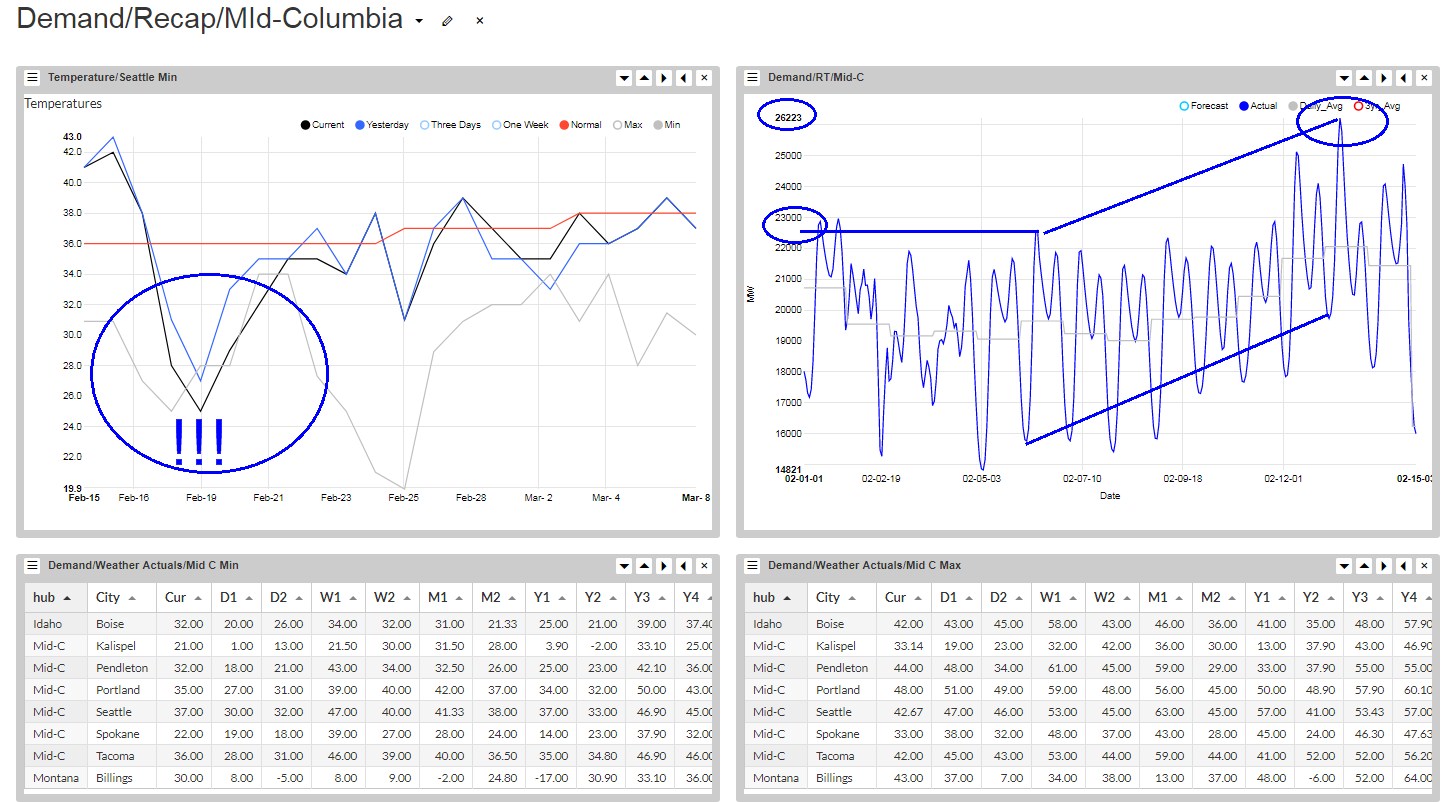 Seattle’s lows in the mid-20s? As the forecast stands today, those lows will set new ten-year records; demand has already sharply rallied off the very warm temperatures of last week; should this forecast hold we can expect “Design Day” type loads which means new records set.

Portland plays with the low 20s, and this forecast has grown colder than previous days.

Tacoma blows past its ten-year low and sets records for three days in the most recent NWS outlook. A real deal cold that is close enough inside the forecast horizon actually to think it might happen. Note how many Tacoma days are below average.

The fat in Mid-C’s net demand is about to get burned off in a hurry, all of which tees up for some exciting developments in the rest of the MidC strips. More on that in the next post. 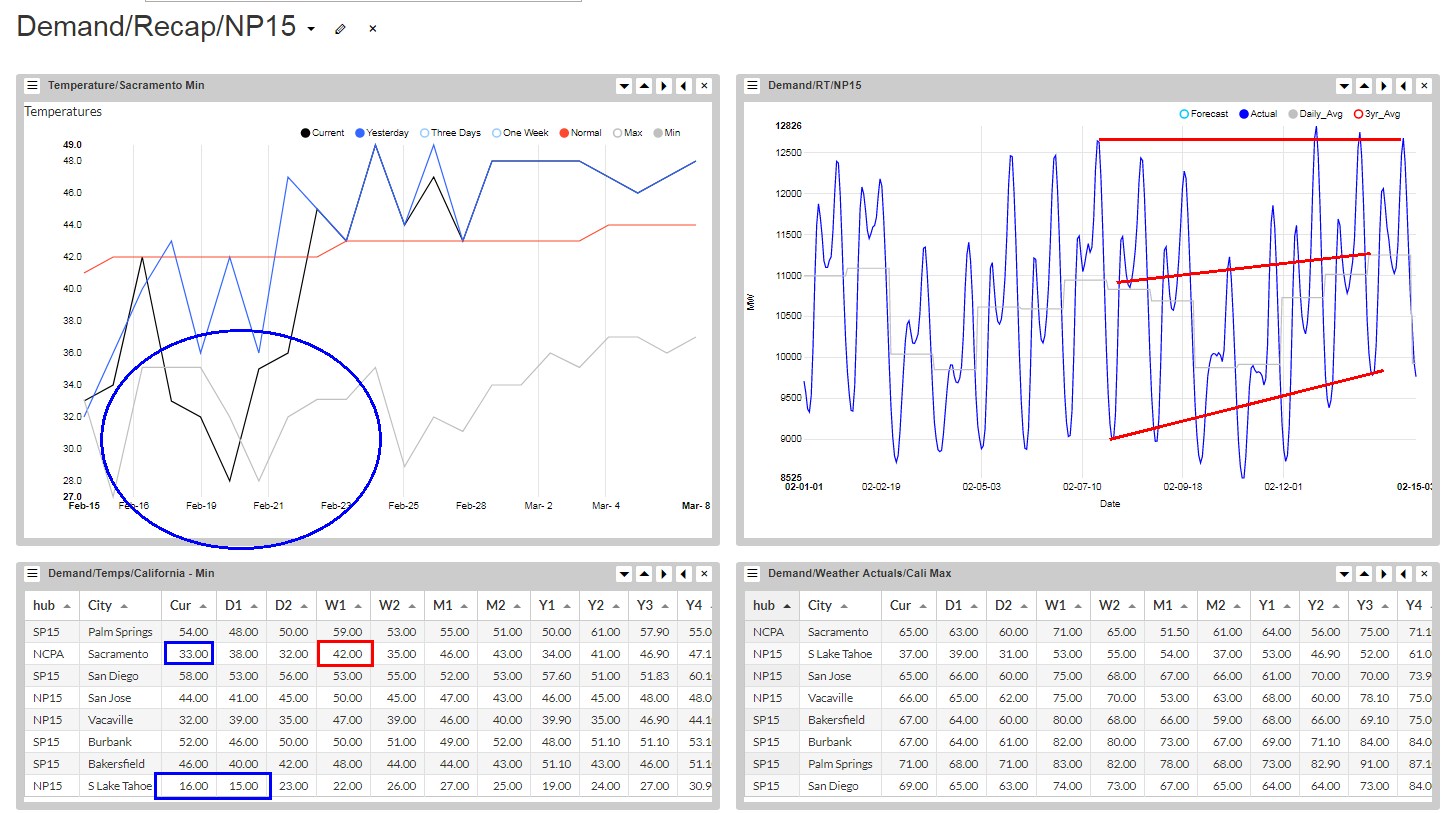 This cold event is not limited to the Northwest; no even California turns sharply chillier. Across the WECC, the cold builds which is what you want to see if you’re long. Every hub rallies, none are overly anxious to send the other any energy. Toss in some significant outages, like NP’s Diablo offline, and we have the makings of a fun week. 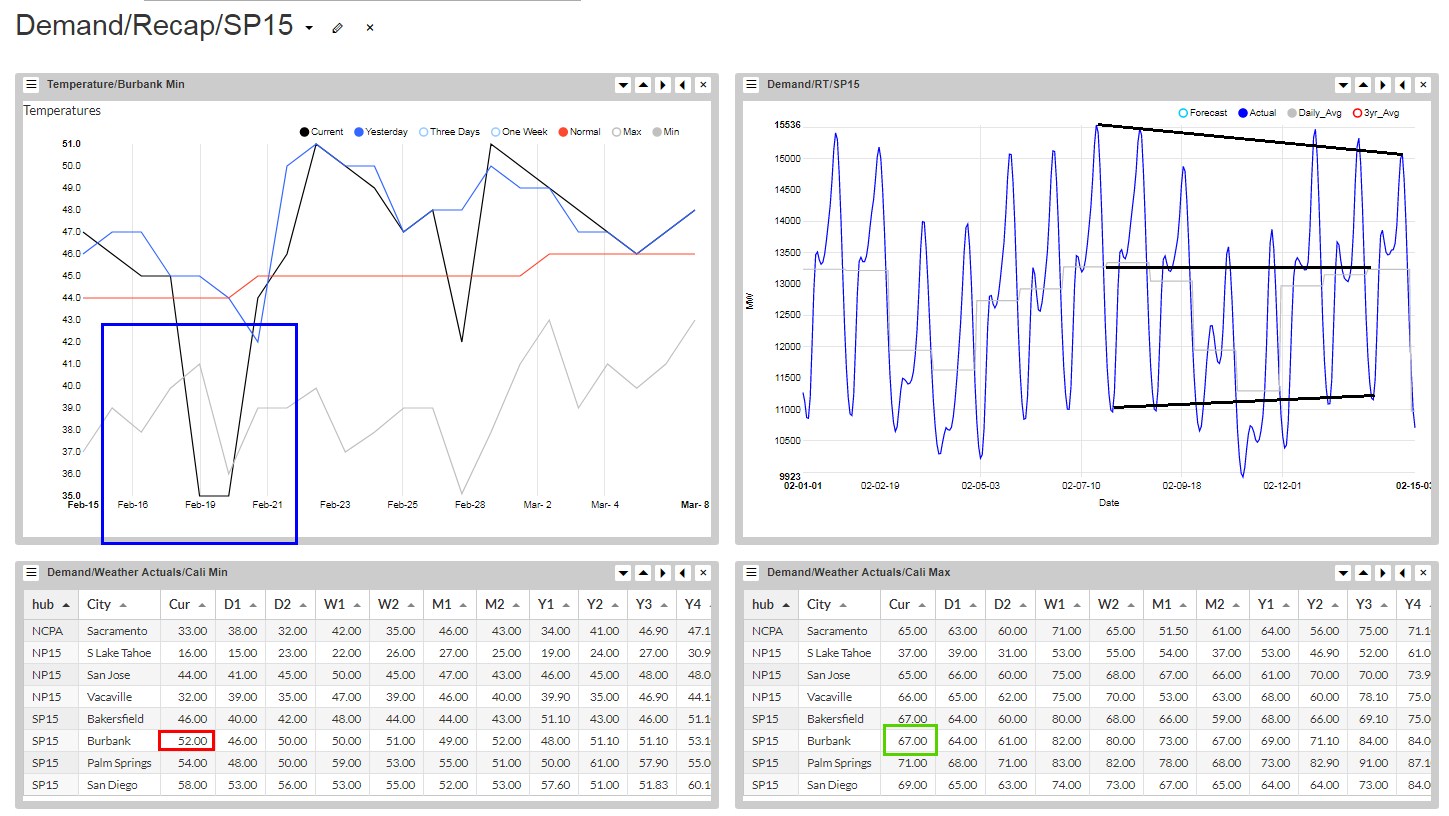 LA will see the coldest days of the winter. Meanwhile, SP’s loads languish, falling from the same day a week ago off of some mild temperatures. 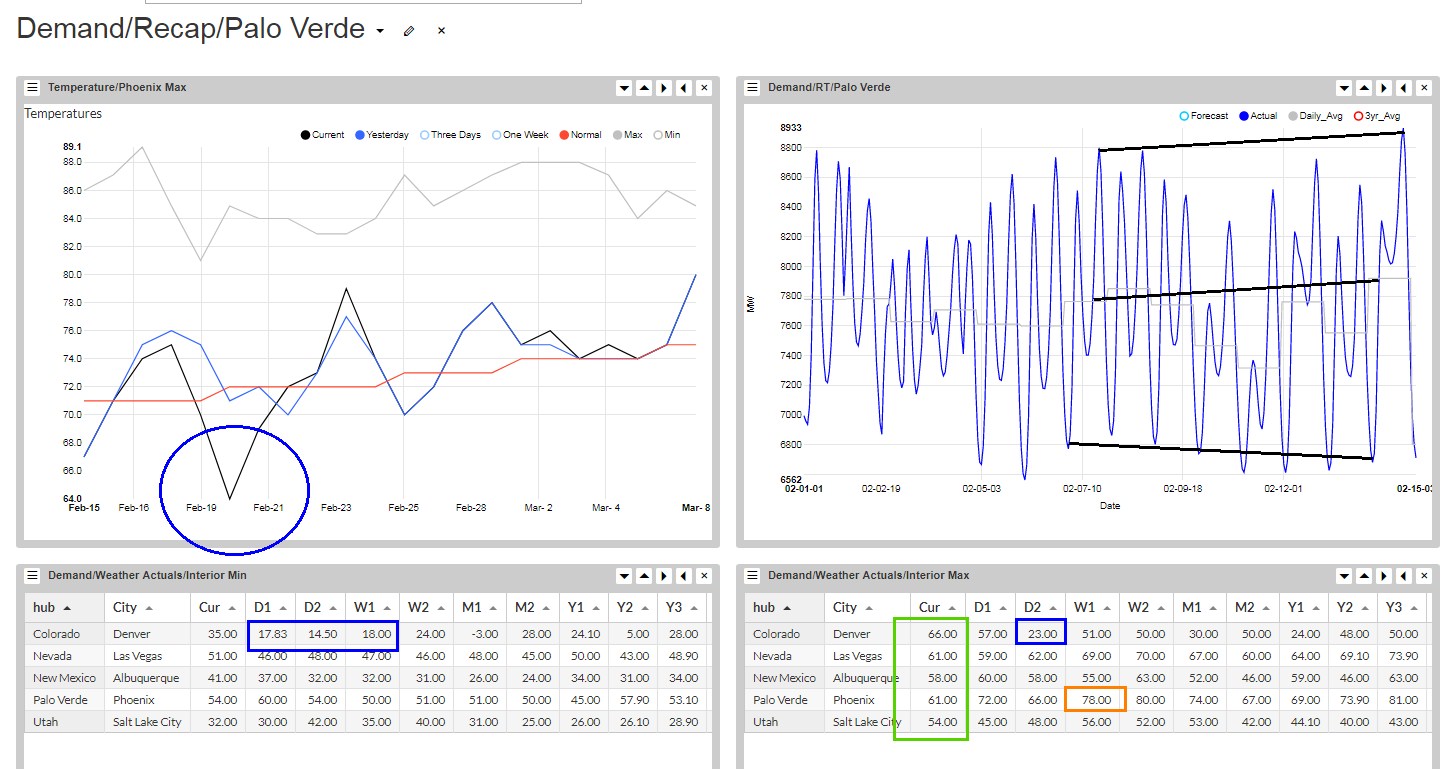 That spike at Socal Citygate caught our eye, just when that hub seemed to be calming down, now it doubles in price in a day. Huh?

All hubs, except Sumas, enjoyed a bounce off of a long-running bear market; not sure why Sumas didn’t rally too, and with this cold weather we’d be going naked long the March, or at least selling the spreads. 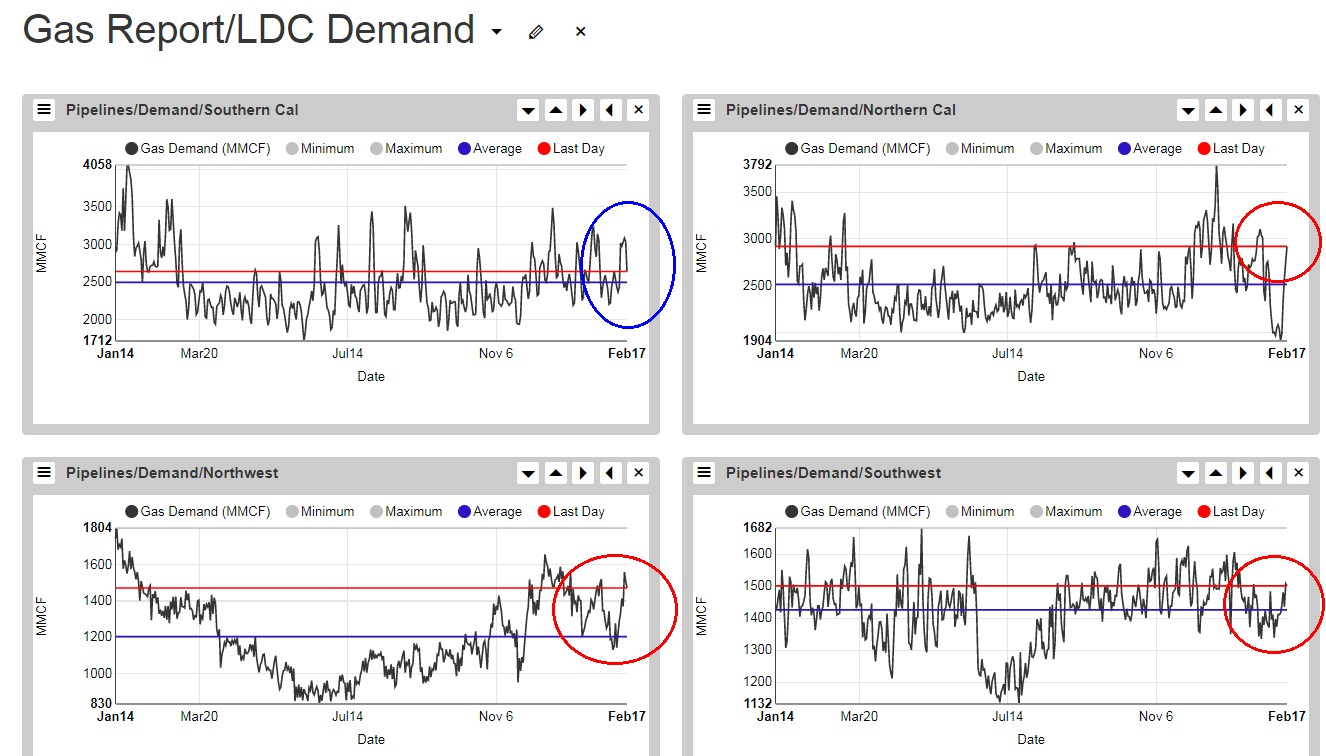 This derivative report aggregates all the LDC’s draws from the western pipelines – we call it “gas demand,” which is exactly what it measures. Every region saw sharp rallies, except Socal – but of course, Socal is the one spot hub that rallied.

We know SCG didn’t rally off of demand, perhaps supply? Nope, all imports are about the same, Needles didn’t trip. There was a 200 MMCF draw yesterday, but today’s is barely 50 MCF, and the region remains 14 bcf fuller than last year on the same day. 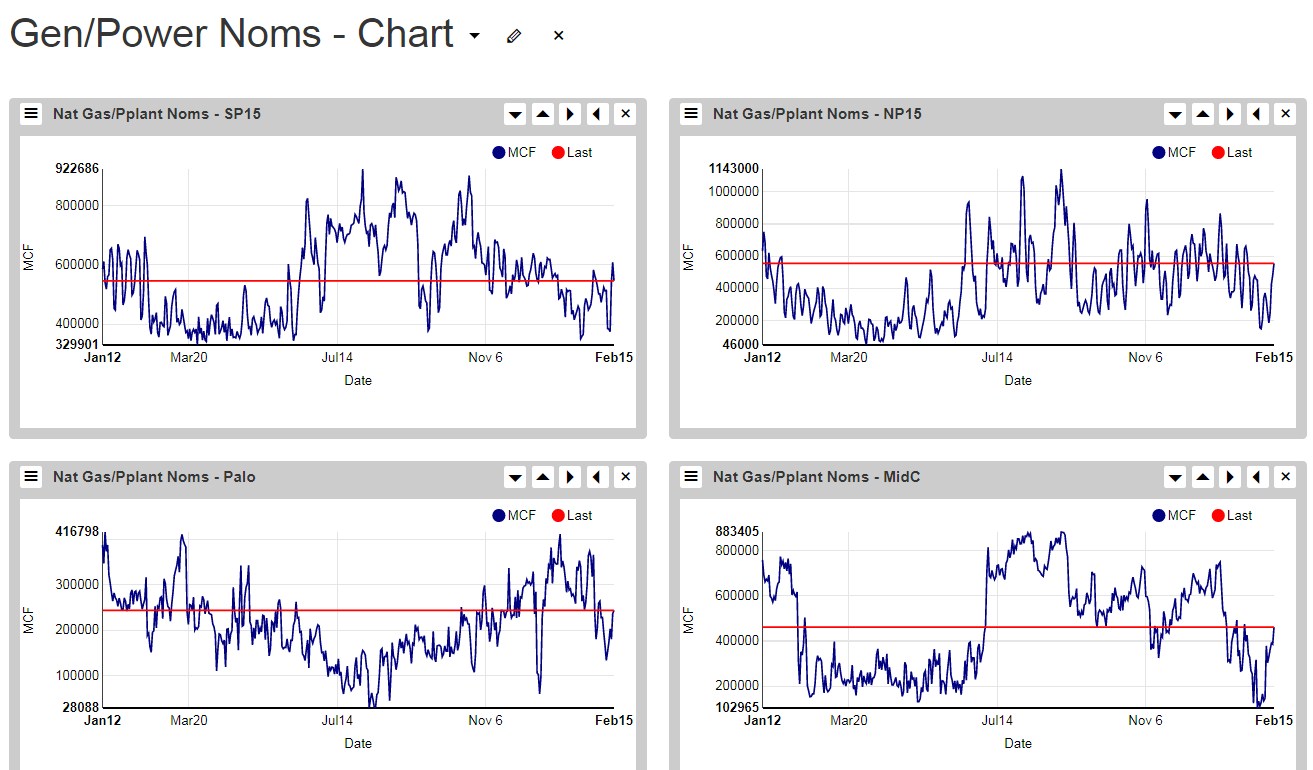 Tracking power plant gas nominations across time remains the best “weather vane” of WECC fundamentals, in my opinion. And all hubs are up, sharply, but nothing like they’ll be next Monday. I’d expect every gas plant in the Mid-C to be running, starting Sunday and not backed down til Wed or Thurs. 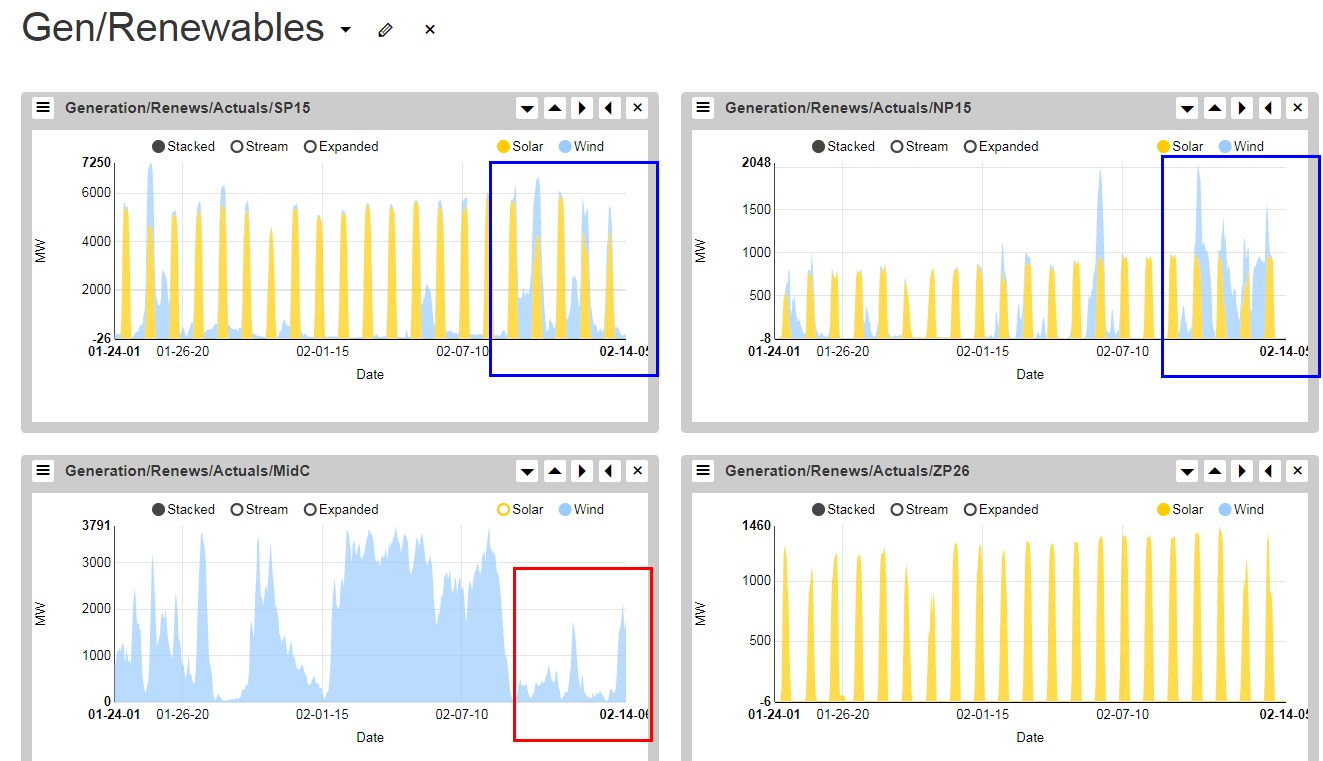 The ISO saw lots of wind, BPA not so much. BPA’s renewable delta shows up in Net Demand, the ISO not so much. We’ve already seen how the ISO dispatches solar to offset wind. I wonder if their ratepayers know that is going on? Nah, they just look at the blades spinning and sigh, knowing they just added another day to the planet’s life. 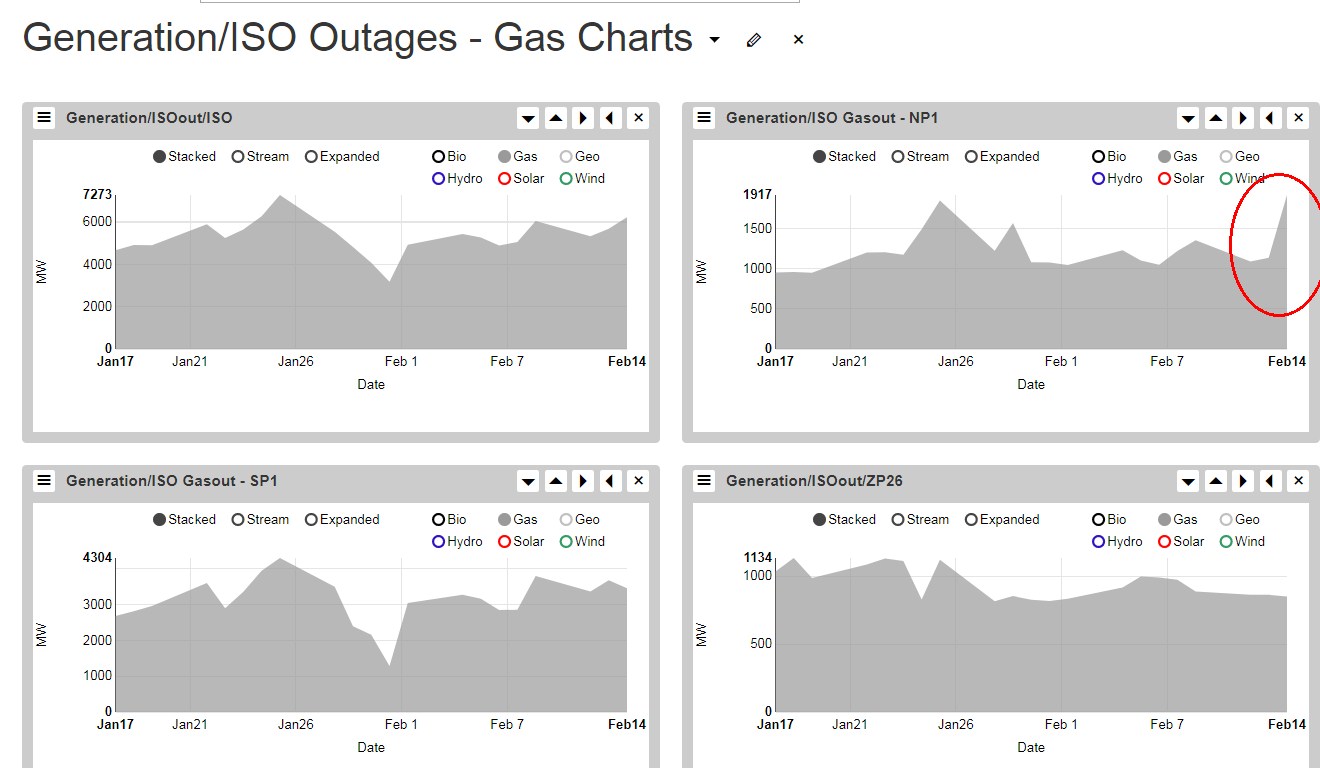 ISO gas outages are sideways from Monday, except for NP which spiked up nearly 1000 MWs. Visit the website to see the individual units. 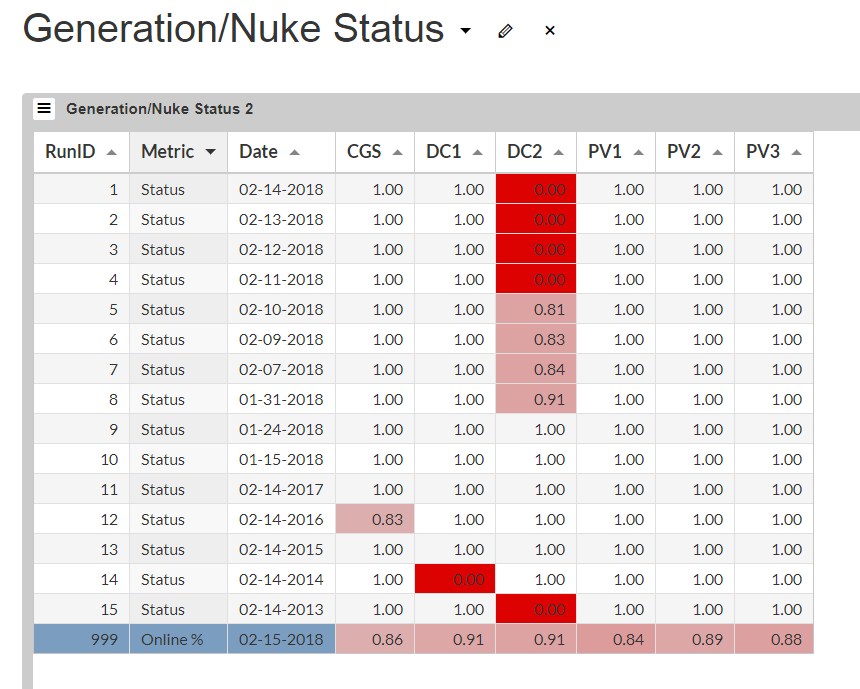 Diablo #2 is in refuel; it won’t be back until mid-March if it’s lucky. Coming in front of perhaps the coldest winter days, plus a dry-as-a-bone hydro situation should make for some fun virtual trading. It’s already interesting; we’re seeing robust congestion creeping back into the DAs:

But the trend is just slightly up.

We said its dry in California, right?

The only place wet inside the Golden State was LA, and that was a week ago. However, we see a storm brewing in the 11-15 day forecast; if you can believe anything in that forecast horizon, we don’t.

I won’t bore you with the Cal rivers; they are camped on ten-year lows.

The Northwest will get some rain and snow, but about half of normal. This extended dryish pattern is taking a toll on the snow anomalies: 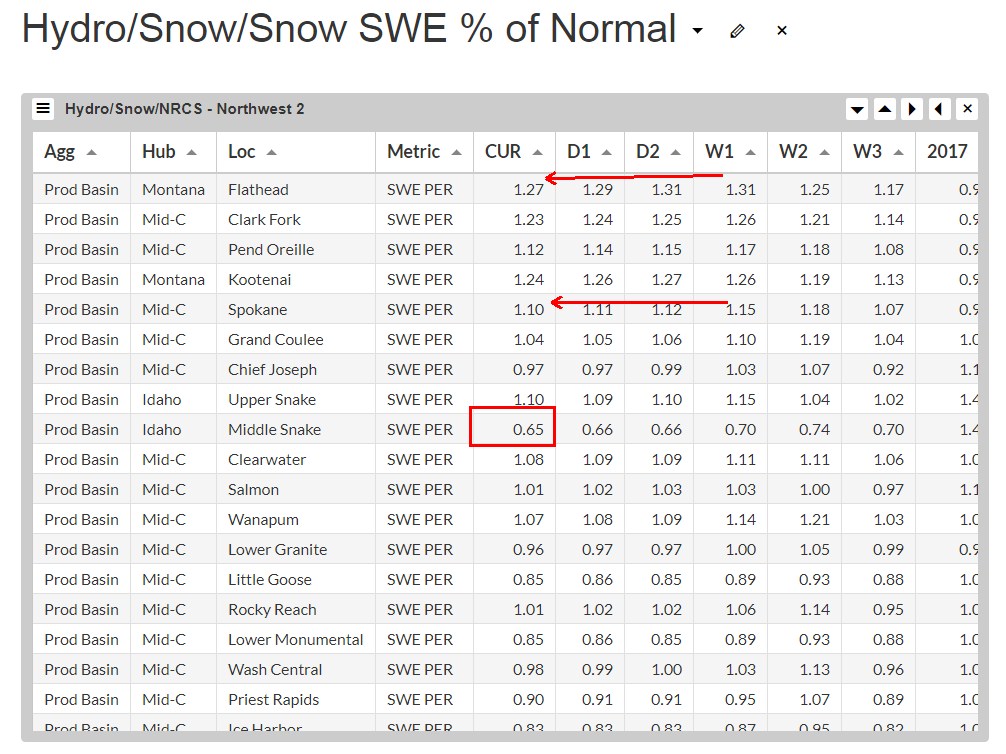 Every basin is down, most about 5% from last week. The current precip forecast should extend that trend, teeing up the March flood control for perhaps a relaxation of the draft. Regarding that draft, we believe another drum gate maintenance project is scheduled which means Coulee will be pulled to 1255′ by the end of March; the Feb target for flood control was 1261. It looks like BPA has already started drafting for that work:

Discharge at Coulee remains robust, but next week maybe even stronger as BPA drafts, not for flood control or drum gate, but for load. All of which will pull the pond harder and make the drum gate target mooter.

By the way, we’ll be adding a new report to our Flood Control data; this report will track cumulative draft-driven flows at BON and GCL. Here is an early bird:

The reason for making this report is the non-continuous draft requirements in the flood control.

The target drafts (KAF) don’t always occur in the same period, so to get a true idea of the impact on the MidC you need to convert these volume targets to daily flows, which is what we did. Since all the plants, but Dworshak and Brownlee, reside upstream of Coulee we can infer that all of those drafts pass through Lake Roosevelt. That is what the chart is plotting – cumulative draft-driven flows into Coulee (plus Coulee’s draft). What caught our attention was the dearth of flood control flows in the first two weeks of March, then the big flows the last half.

Which may be what you see in the daily STP energy forecast. Let’s zoom into that daily:

Note the sharp cuts beginning on March 1, then the slow rally starting in April. Contrast this year with last, too. What is missing from the current STP are those last half of March drafts, which possibly will be added in future releases, we think they must be added. The monkey wrench in all of this is next week’s cold and how deep will the reservoirs be drafted to serve load? That cold weather will drive sharp cuts in natural river flows all of which will result in a faster drawdown of the reservoirs. The plot thickens, don’t puke out those Prompts just yet. 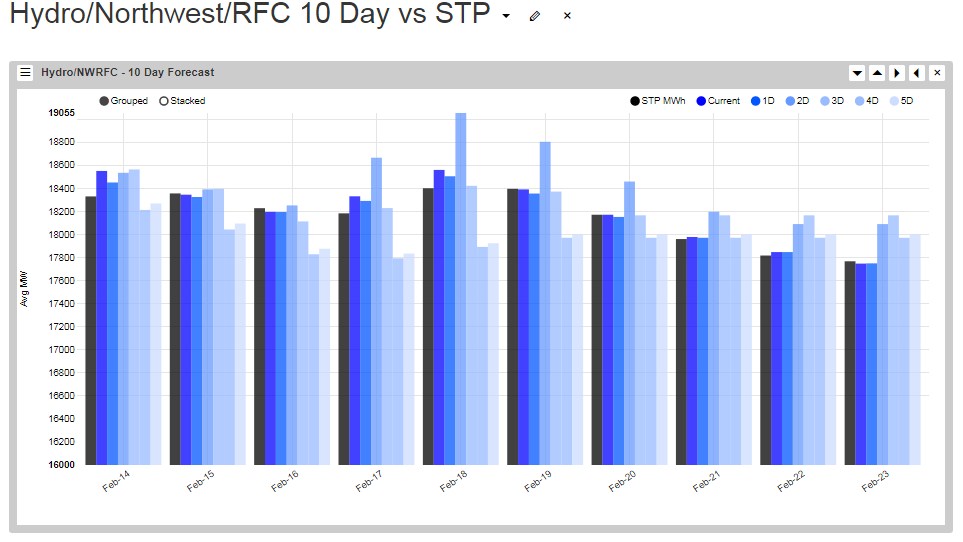 I’m posting the RFC 10 Day plot only because it shows consistency to Monday’s STP, which is typically not the case. We’d expect these forecasts to show rallies in today, or tomorrow’s outlook as BPA realizes it must draft deeper to serve Monday-Wednesday loads. 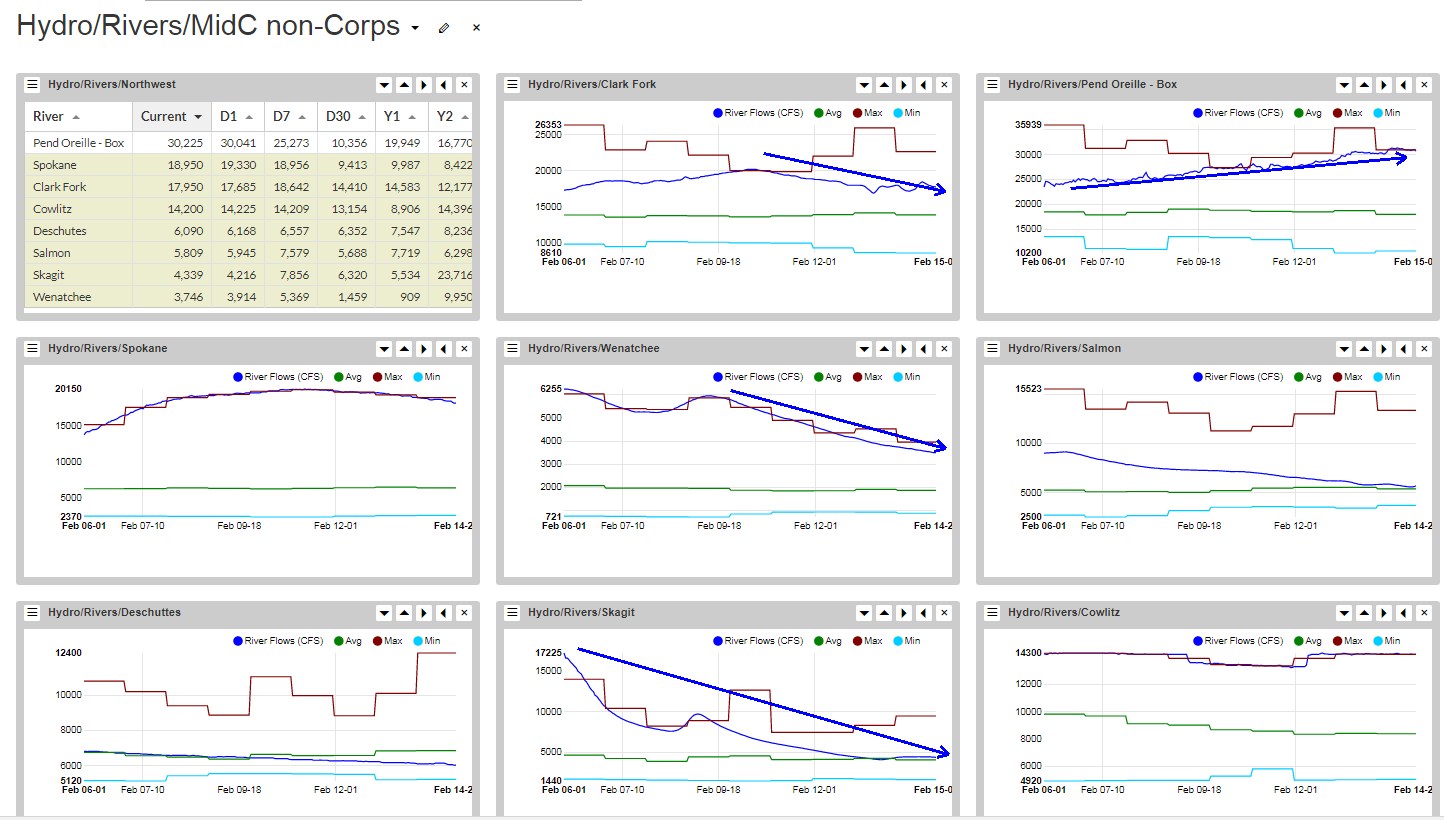 The dry weather, and recent cooling, has taken its toll on the non-federal projects, most are showing sharp declines. The Pend Oreille isn’t because it is regulated off of the lake of the same name. 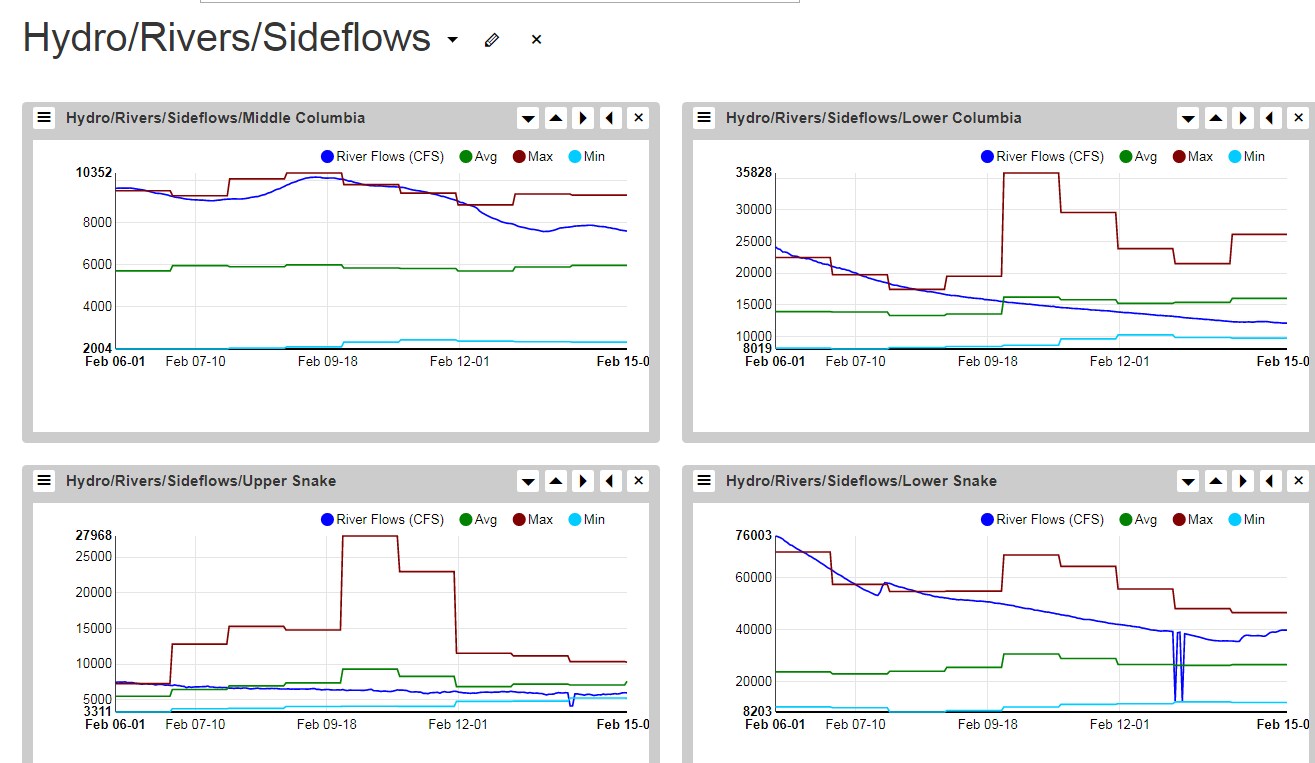 The side flow indexes are also sharply off.

No significant new outages to report. Flows are interesting, though:

Energy is back to flowing north on the Northern Intertie, perhaps as Powerex loads up its magazine in anticipation of next week’s strength, or perhaps in anticipation of a struggle to serve its native loads? The AC and DC are hitting TTC limits continuously, more so on the DC. Path 15 is derated but doesn’t matter, northbound flows out of ZP never come too close to the limit. SP is a strong importer on Path 26, rarely did the line flow north.

Maybe the most bullish cash outlook of the winter, of course, all of that is contingent on the cold staying, or better, building. Market thoughts to follow.