Mid-C shows up with consistently colder than normal aggregate temps over the next 10-day, while NP and SP hover within a degree of average.  Montana looks bitter cold, falling more than 10 degrees below average, while Albuquerque and Salt Lake show the only forecasts above 1 degree from normal.

The forecast remains primarily dry in the west as no stations show an anomaly greater than one inch.  Portland and Seattle gained nearly half an inch day-on-day while Spokane and Western Montana saw their precip forecasts shrink. 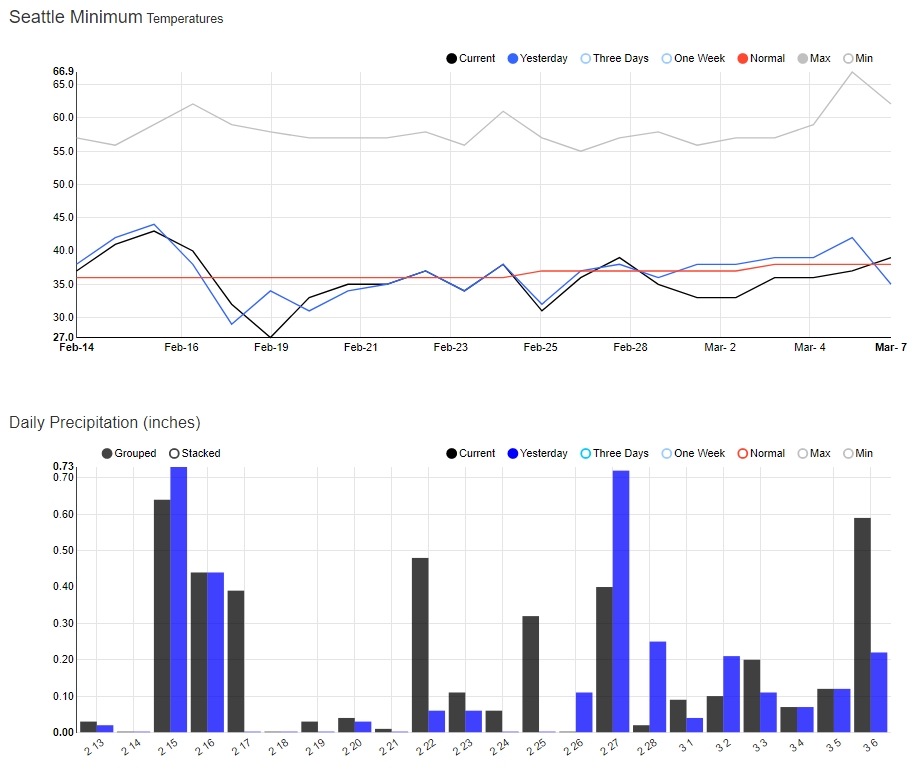 Seattle is projected to fall into the mid-20’s by early next week, dropping to nine degrees below normal and seven degrees cooler than forecasted yesterday.  Until then, daily lows should stay in the 40’s with a peak of 43 on Friday, seven above normal.

Portland will get its share of winter-like weather next week as well as temps sink to 27 on the 19th, six below normal.  Lows will climb five degrees over the next two days before welcoming the cold front, eventually leading to a difference of 17 degrees from Friday to Monday. 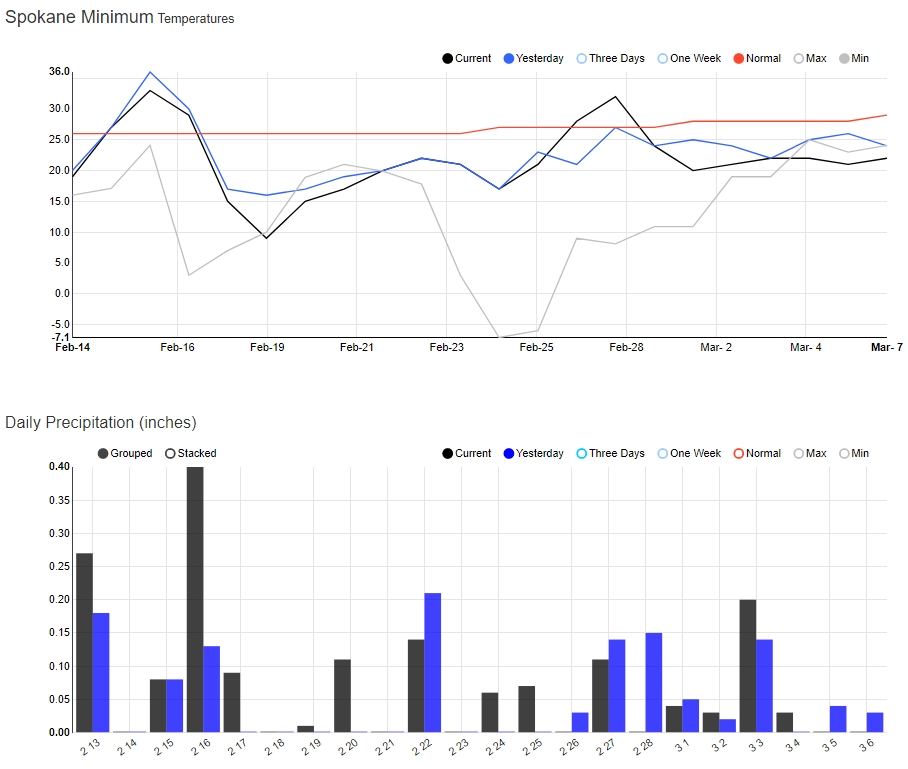 Spokane’s mix of cold weather and decent precip should be enough to add measurable snowpack in the mountains.  Temps will be cold enough to see an uptick in demand as well as temps fall to just 9 degrees on the 19th — 17 below normal and seven degrees cooler than forecasted yesterday.

While San Jose’s aggregate forecast showed an anomaly of less than a degree, the 21-day high chart shows than mainly due to offsetting warm and cold days over the next week.  Highs should peak at 72 over the weekend before crashing back to 60 by Tuesday.  Nothing much to drive demand, but still a decent swing in temps.

Move inland a touch and things cool off significantly.  Sacramento will just touch freezing tomorrow with a projected low of 32, nine degrees below normal.  Lows are expected to stay below normal through the 21st, though gradually climb their way closer to average.

It’s a calm and fairly normal forecast in the desert as Phoenix doesn’t vary by more than five degrees through the 21-day forecast.  Highs will dip into the 60’s tomorrow before rising back to the mid-70’s over the weekend.

80-degree highs are well in the rearview mirror as 76 sets the high-water mark over the next three weeks.  There is a slight warm-up compared to yesterday’s projections from the 20th-22nd, otherwise Burbank has a stable and relatively average forecast.

Salt Lake’s mild winter doesn’t show signs of changing as daily lows are forecasted to rise to 42 by the 17th, 16 degrees above normal.  Just one day over the next 10 are projected to fall below average.

Salt Lake’s consistently above-average daily temps illustrated in the chart above have resulted in degree days for January and February to fall 25% and 28.5% respectively.

Montana’s maintains its position as the only hub with above-average snow water equivalent at 4″ above normal (26%).  Mid-C falls a half inch short, primarily due to a dry Oregon as all hubs with more than 17k in CMW (Spokane, Pend Oreille, Clark Fork, and Grand Coulee) are at least 2″ above normal.  Oregon Central and Oregon West each fall more than 55% short of average.

Grand Coulee began deviating from the mean on the 8th and has seen its levels fall to 76%, four points from average.

Historically, this puts GCL nearly 10 points lower than the same date last year, though just slightly lower than 2016 and 2015. 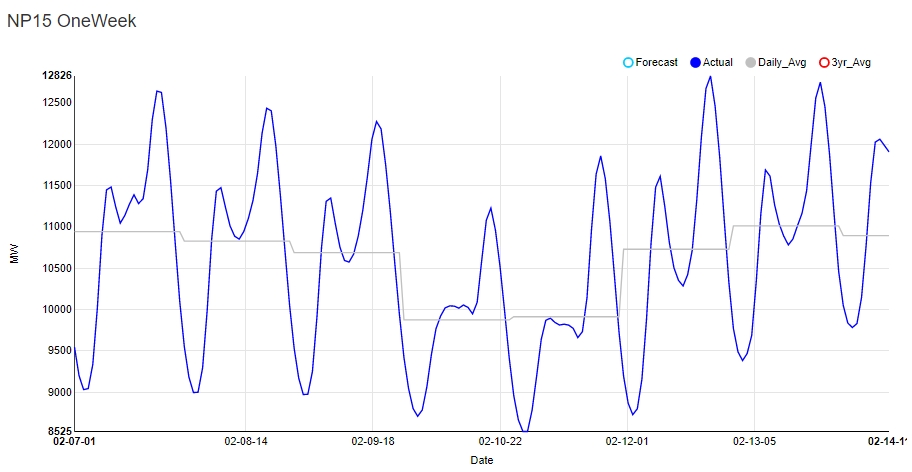 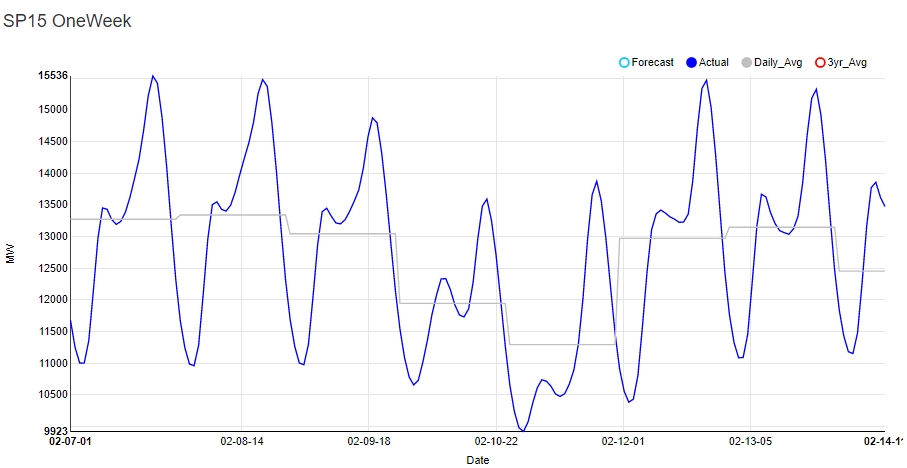 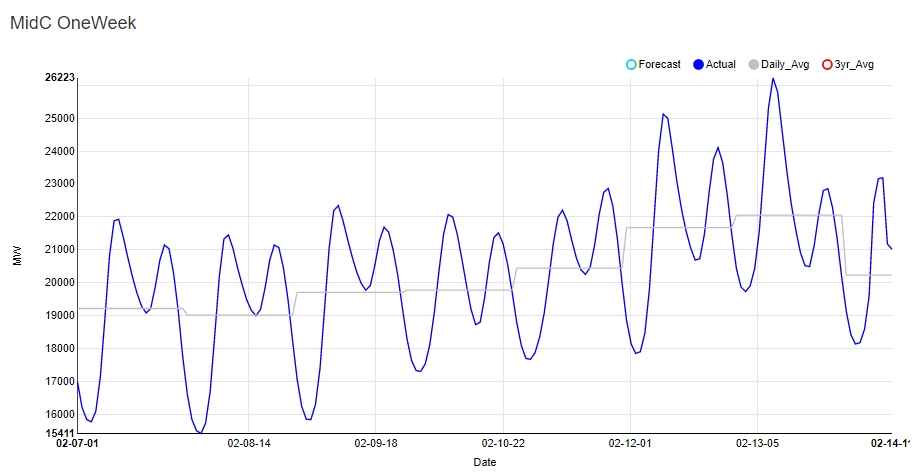 Average daily Mid-C demand looks like a staircase as loads have increased each of the past five days, eventually leading to average demand at 22,055 yesterday, a week-on-week increase of 2,850 MW. 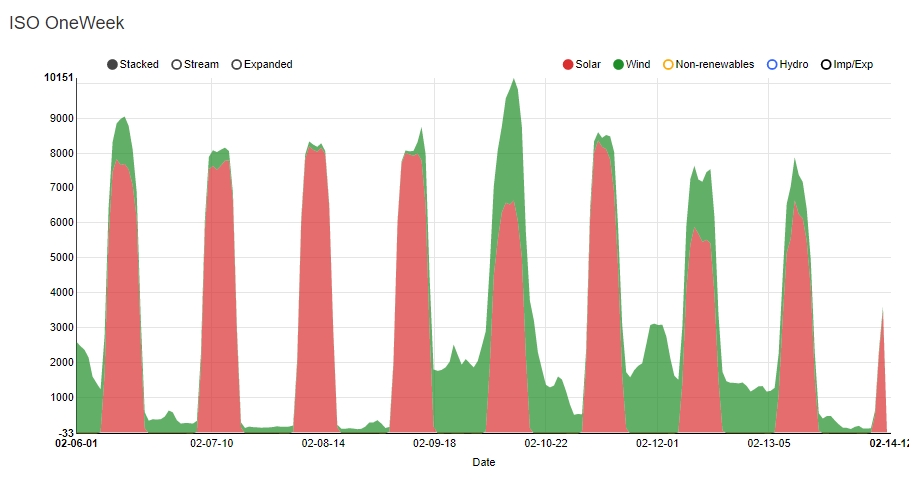 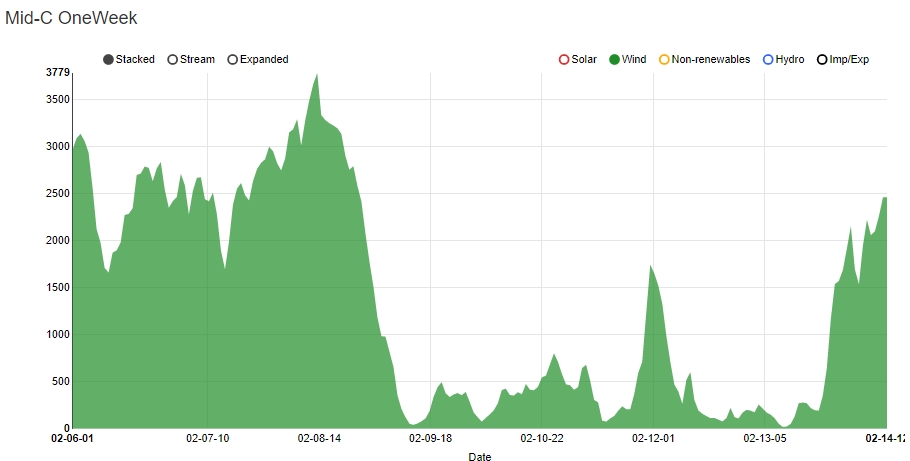 Wind was almost nowhere to be seen earlier this week as demand began ramping up.  It made a return earlier today however, peaking at 2,457 MW in the latest hour.  Compare that to yesterday’s high 1,535 in the late hours.