The news of the day is the surging flows above Coulee, especially on the Spokane, and the massive drafting on Lake Roosevelt, all of which is crushing the Mid-C; strangely, however, the Northern Intertie flipped and exported INTO the Mid-C. Let’s explore these points.

Coulee’s discharge (100% through the turbines) soared to 170kcfs over the weekend, up 50kcfs from last week. Some of this is draft-related, BPA has pulled about five feet this last week; recall the Mar 31 target is 1262′.

That leaves but eleven feet to pull in 47 days and renders March, at least to me, an interesting proposition, from the long side (more on that in the next post.) But the reservoir draft only explains part of the GCL world; we must look to inflows above the reservoir to get the full picture.

Flows into Lake Roosevelt are very strong, both from the Arrow and Duncan drafts and a surge on the Pend Oreille and Spokane rivers.

The Spokane has hit ten-year highs in early February. The snow levels in the mountains feeding that river are massive and they are already melting. These aren’t the sub-3000′ snows, but most likely the sub-4000′ snow. This is early and has implications for the entire Mid-C runoff picture. For Feb, it is just bearish, and where it melts in Spokane, it also melts on the Pend Oreille. Together, these two rivers are contributing about 50 kcfs to Coulee’s inflows of which 20kcfs is an increase over last week.

Blame most of that on warmish weather, not new precip, yet the snow levels saw builds over a relatively dry week: 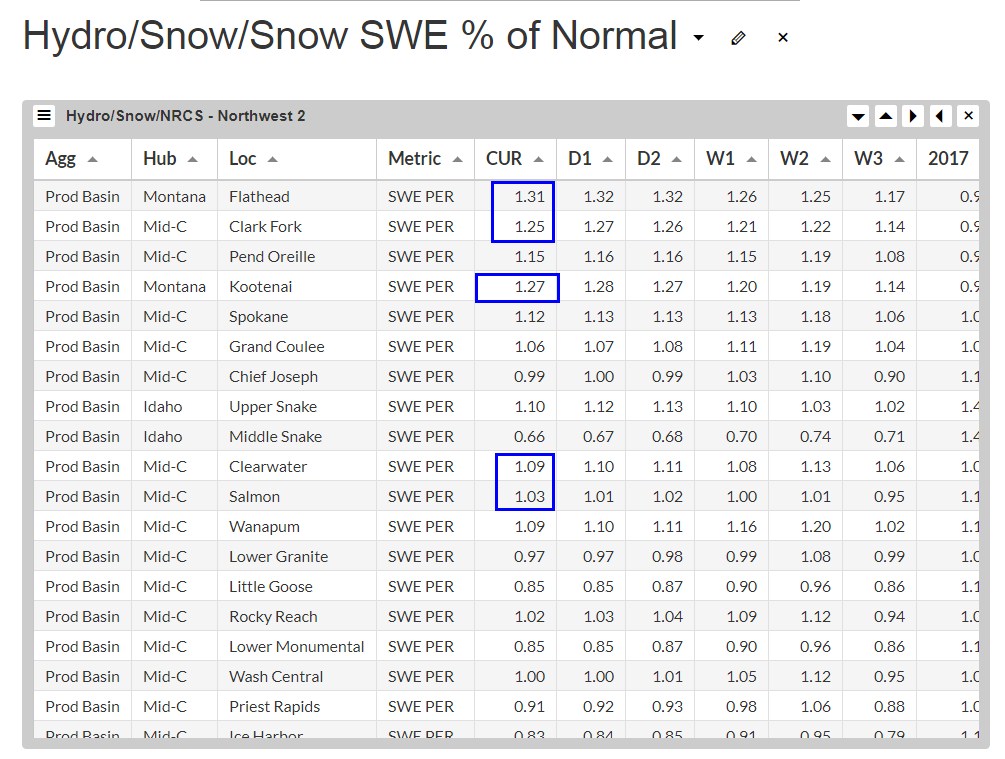 That caught me by surprise, I expected to see SWE levels drop but they didn’t at least the important ones above Coulee.  More on this in the hydro section, let’s see what’s happening with demand. 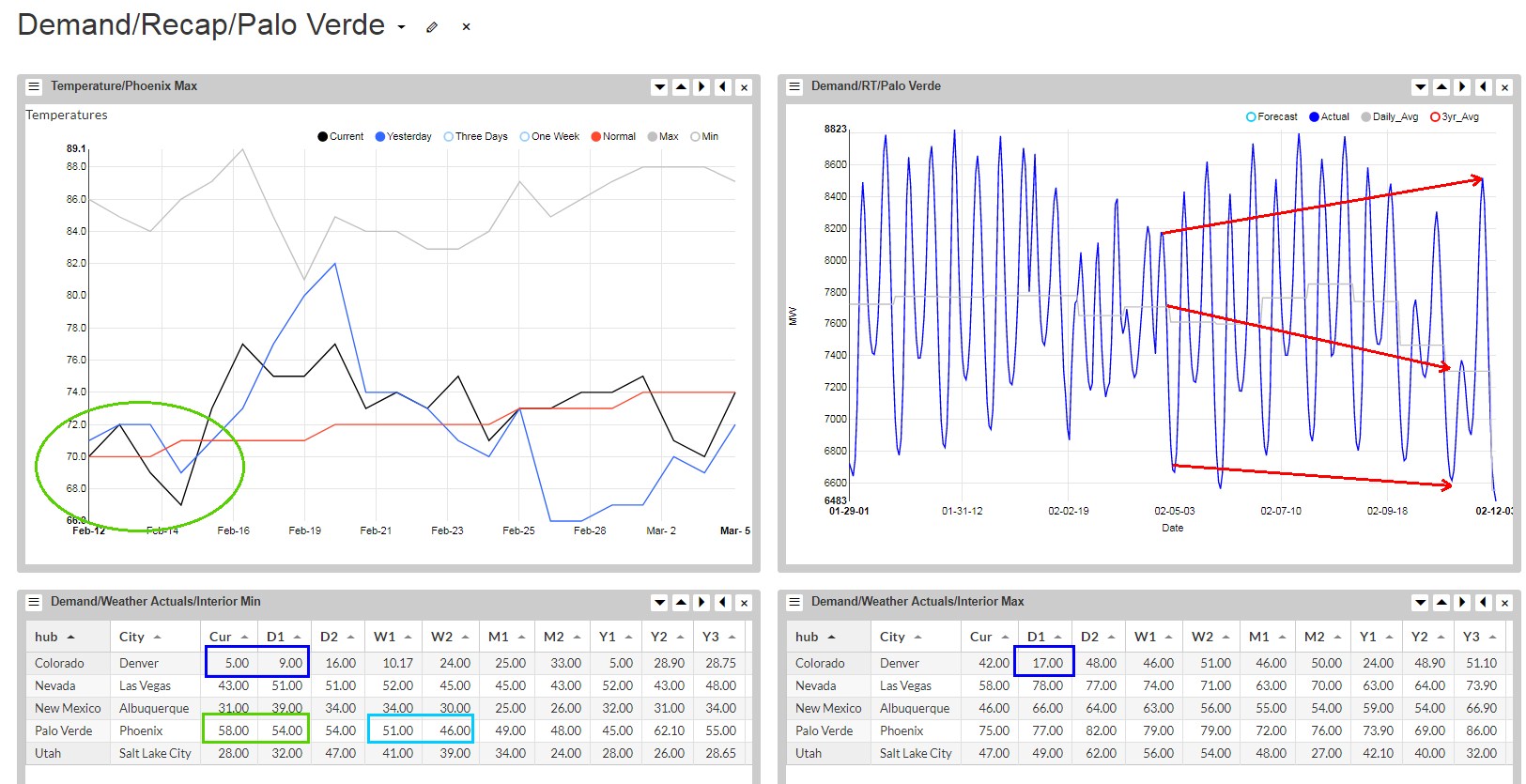 Phoenix is posied to cool off, it already has, and its loads are mostly just sideways. Later in the week, temperatures rally to the mid-70s, but these are non-load events. Denver is bitter cold, but Salt Lake isn’t. 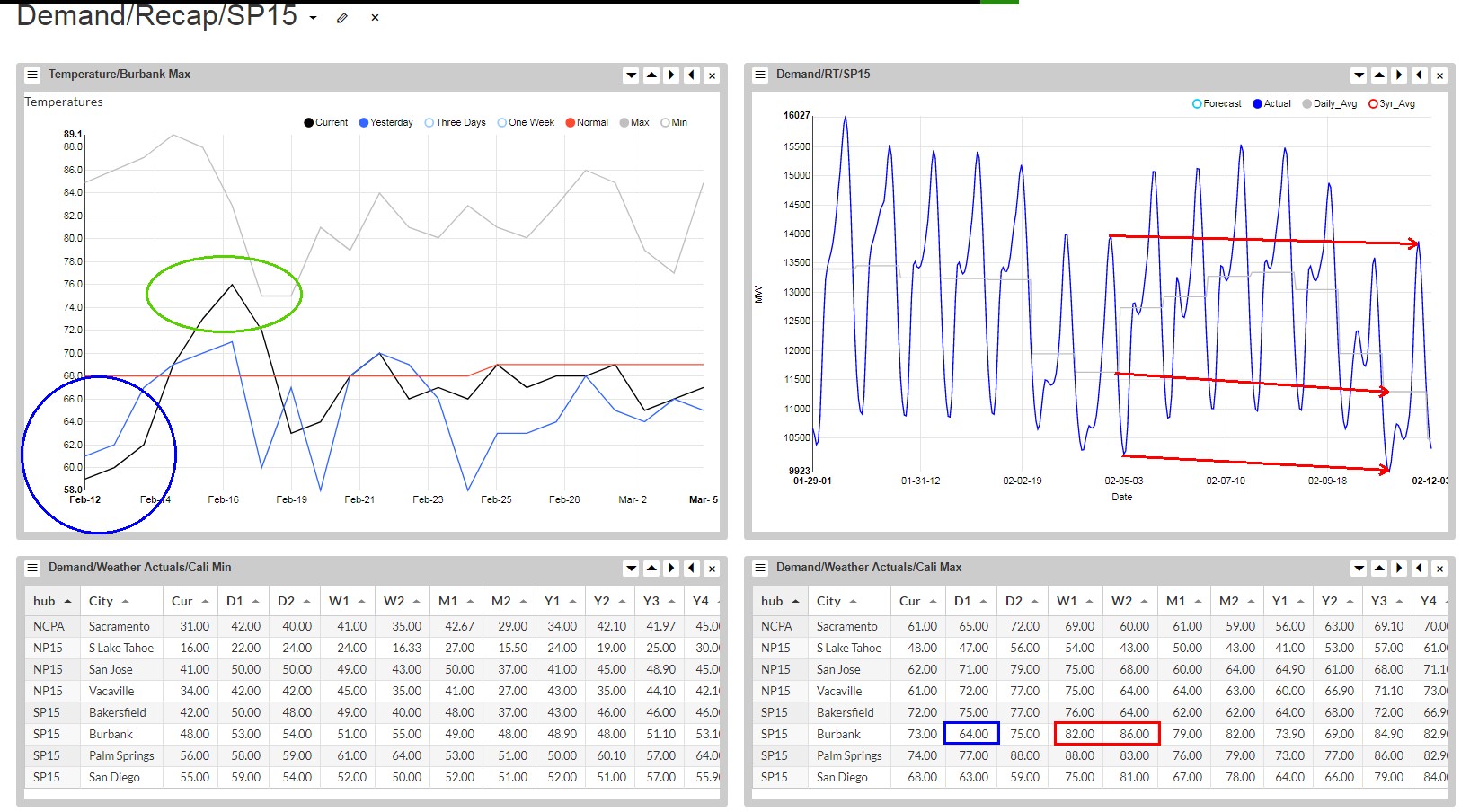 LA is cold, and SP’s loads are tanking. Surprisingly, the Day Ahead LMPs were relatively strong over the weekend:

And hardly any congestion at any of the points. Sunday’s prices were as strong as any weekday last week, but we struggle to see how that holds with the loss of loads. 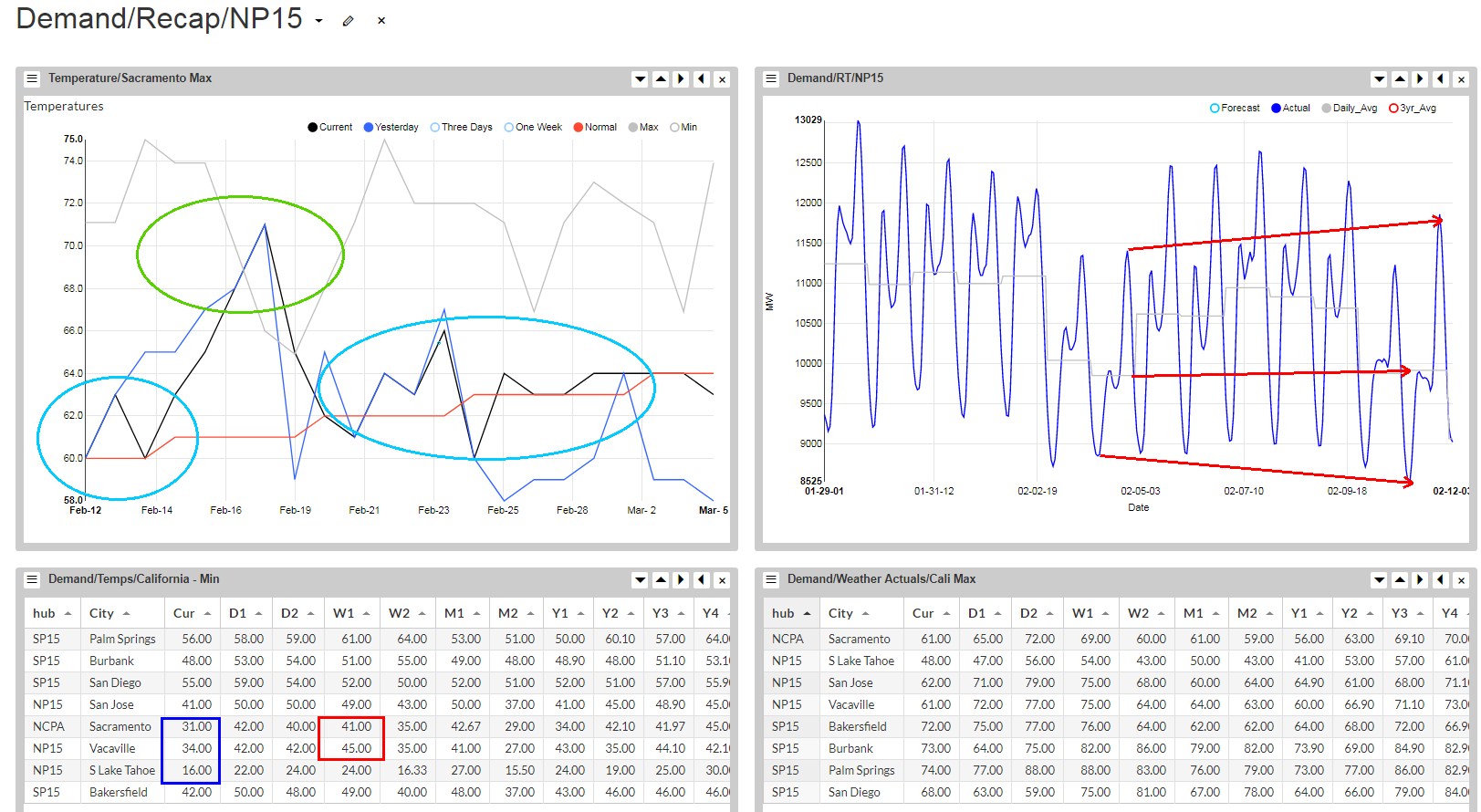 Northern California will be on the chilly side for most of this week, and NP’s peak loads are up, week-on-week, but sideways on average. 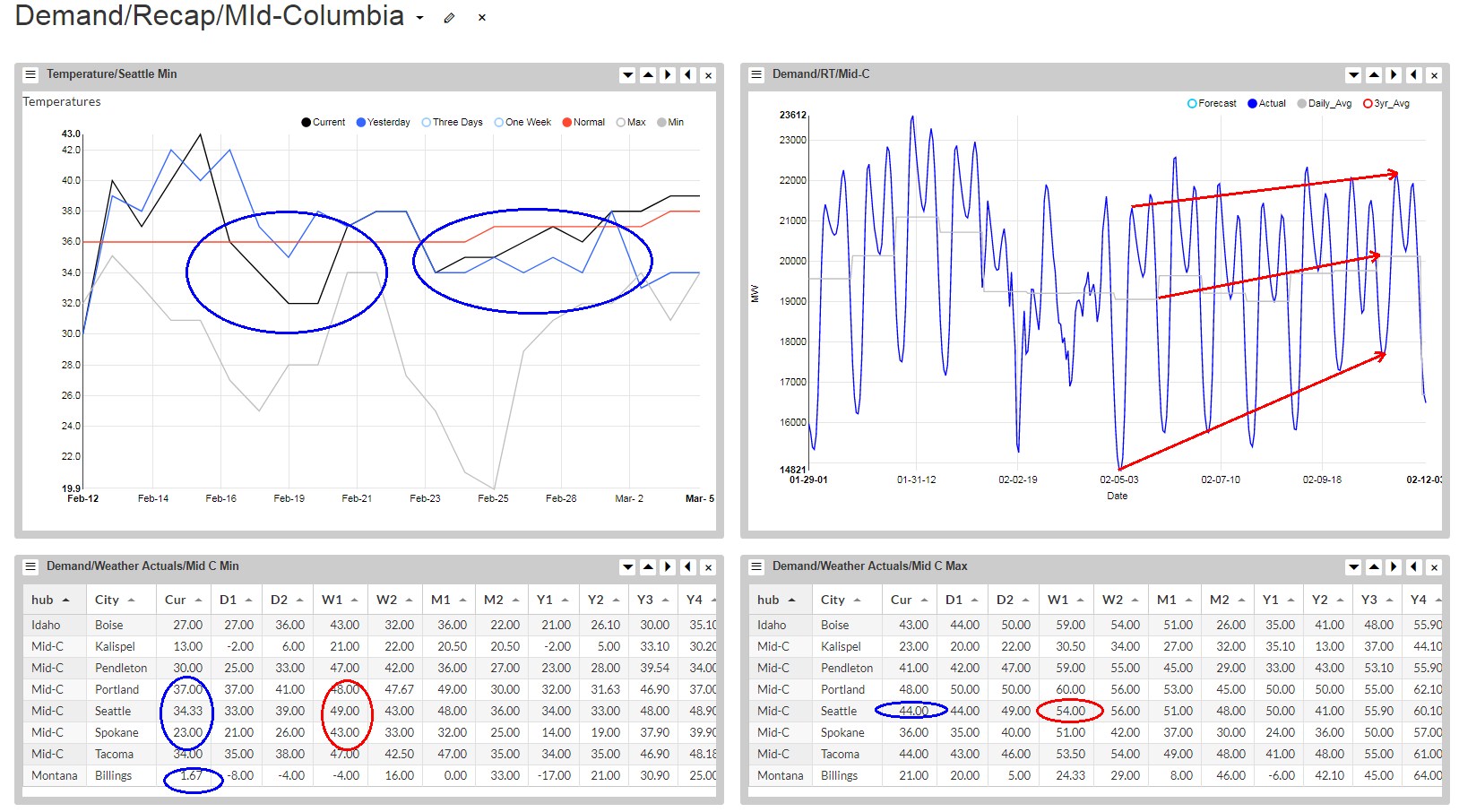 The Northwest cooled down, and its loads rallied. Temperatures will also rally for the rest of the week putting a damper on irrational exuberance. 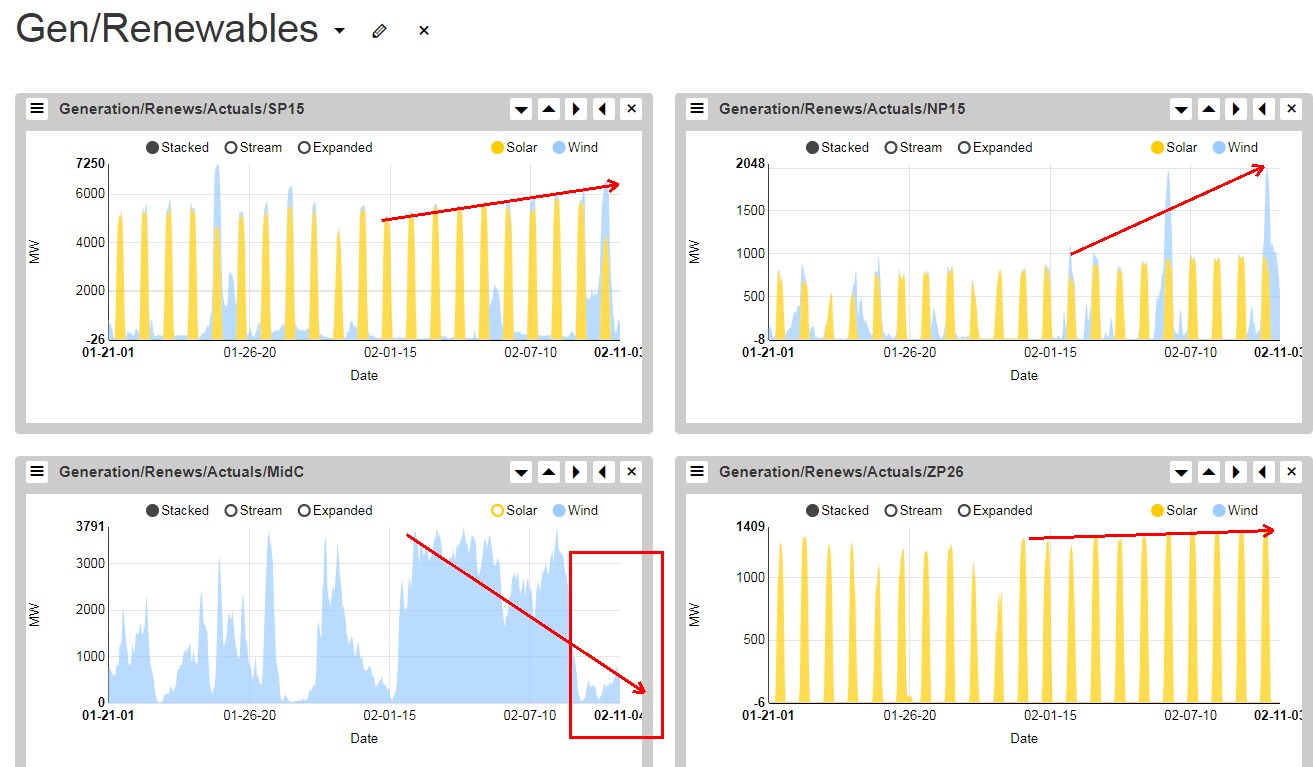 The ISO’s renewables soared yesterday off of some blustery hours while the Northwest’s wind was becalmed, which might explain some of the strength in Mid-C’s weekend cash. Let’s zoom in on SP:

The wind was up nearly 3000 MWs from Saturday, but look what happened to Solar output. It’s like playing poker for fun; everyone has to give back their winnings. Instead of letting the HA LMP get crushed, the ISO just backs off the solar. This is the same thing the state’s Attorney General wanted to put a few of you in prison for back in 2001. Oh yeah, and BPA does the same thing with its spill. If there is any threat to gas on the margin — voila,  an outage at a fed hydro plant and spill gets jacked. 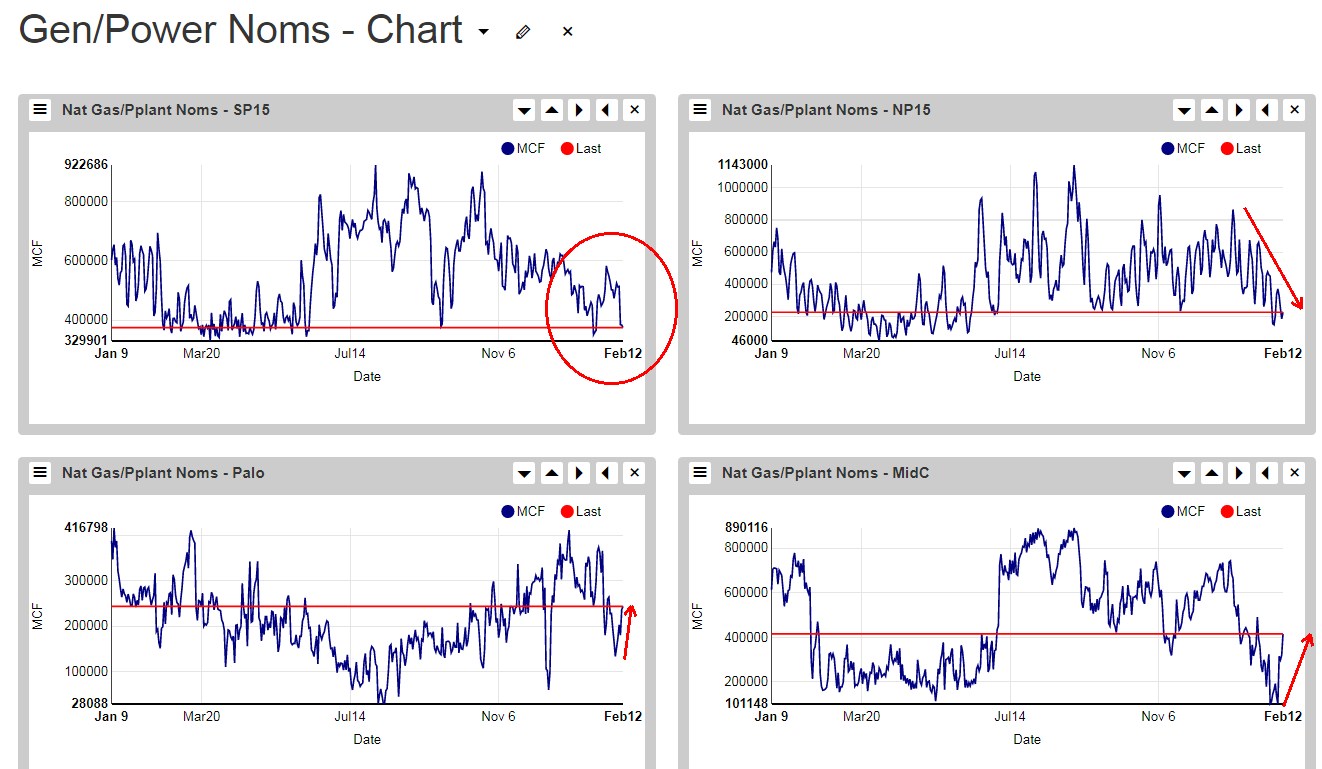 The Noms are a mixed bag; SP tanked as did NP, while Palo and the Mid-C saw sharp rallies. 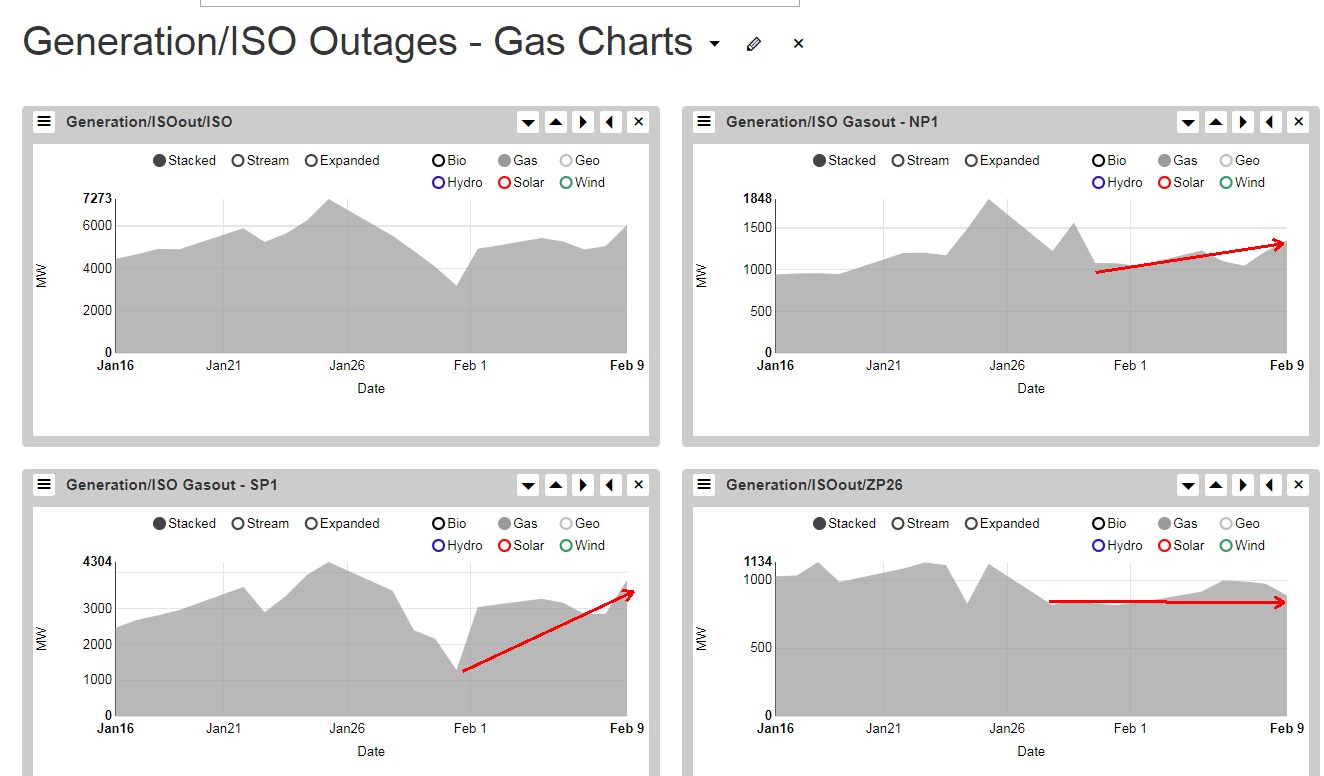 We already spent a few of our hydro bullets, but there are more – hey, it’s February and the hydro trivia at this time of year is near endless. 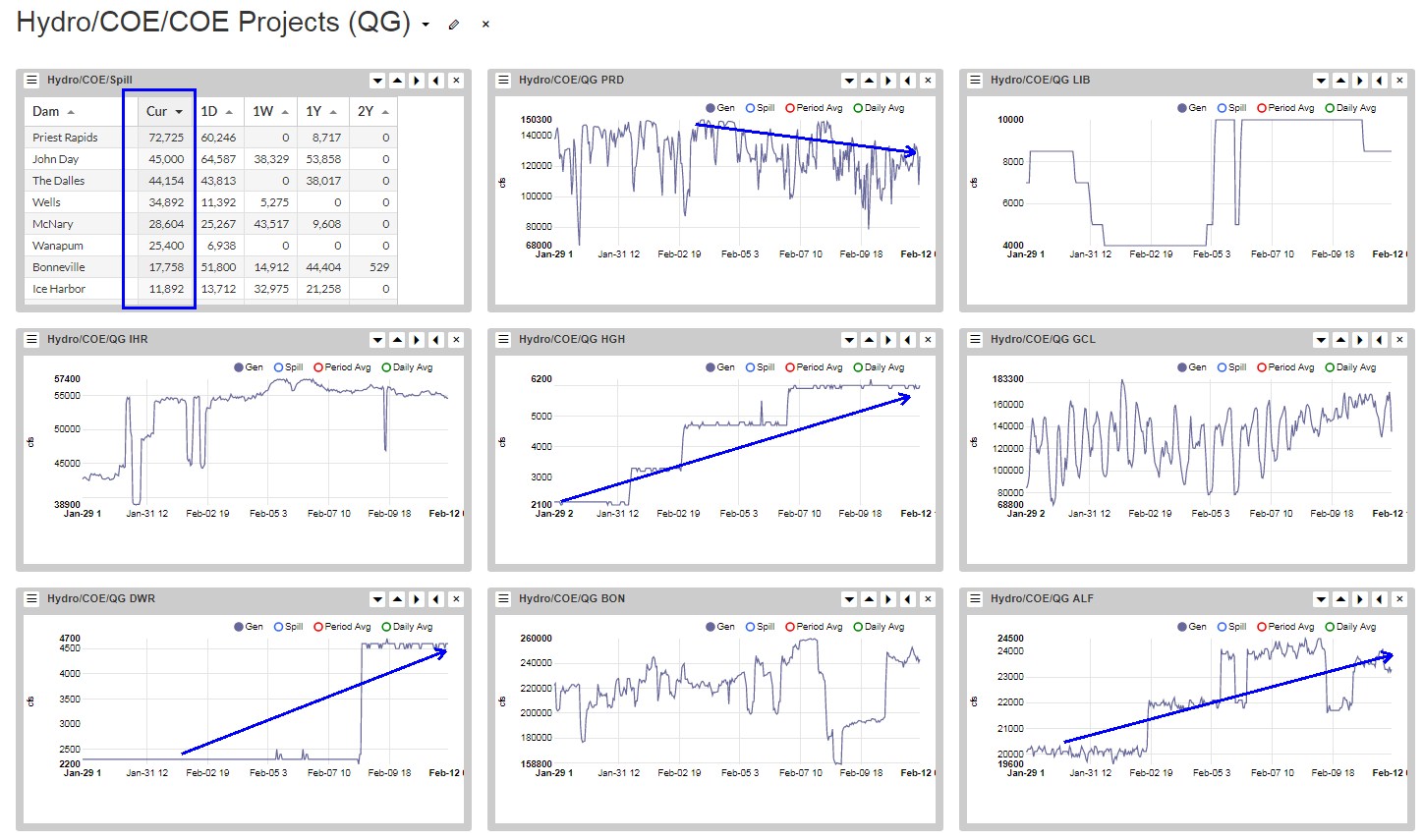 We talked about Coulee already, but check out those spills across the big Northwest projects. 70kcfs on the Middle Columbia in February. All the other regulated projects have seen sharp rallies as they continue their flood control drafts.

Well, all but Dworshak, it’s refilling. 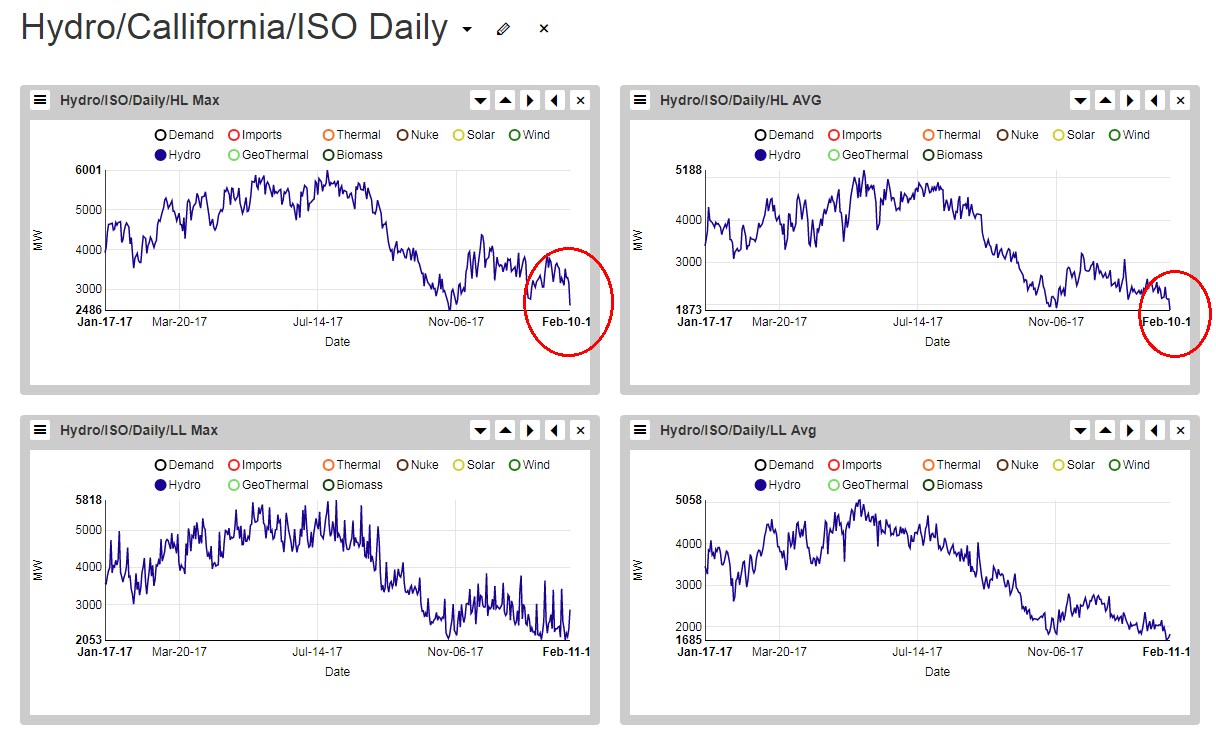 ISO Hydro energy output cratered over the weekend; CDWR realizes this is perhaps the worst water year on record and those precious H2O bullets must be preserved. Brown is Mellow!

Brown may be mellow in Ncal, but Scal may get to flush their toilets this week as the southern half of the state gets all the rain. 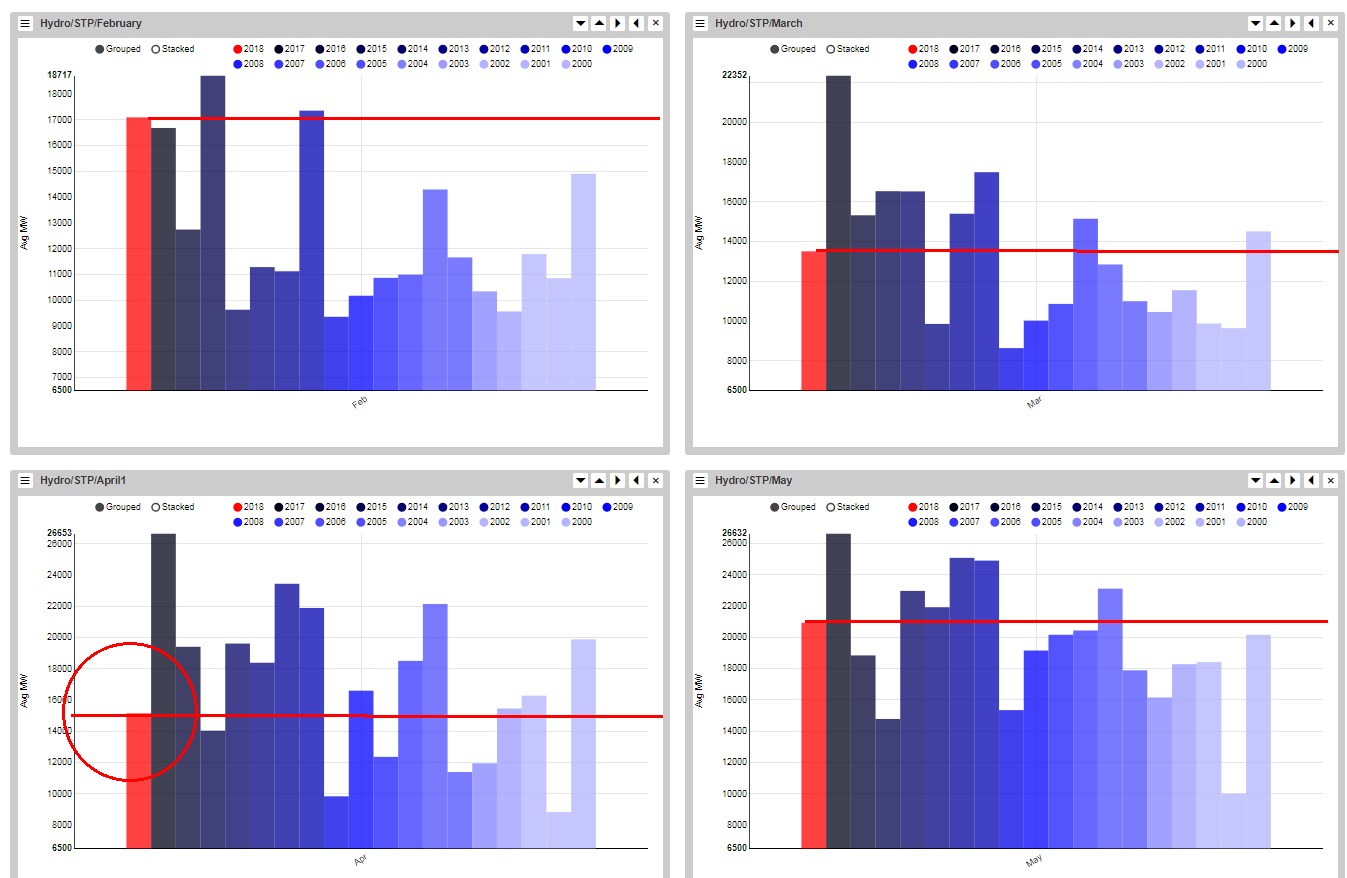 Today is Monday, that means another installment in the STP story later this afternoon. Though we release our report on Tuesday morning at 5:00 AM pdt, you can always go online on Monday afternoon and read it live.

The above table breaks out the STP forecast by month and is aggregated up into convenient blocks of energy. This approach allows the client to view the 125 rivers included in the  STP forecast as a bundled package. I like the view, especially when the current forecast (2018) is stacked against historicals, as it is in the above report.

To do this, we compute energy equivalents using STP flows and historical actuals. For example, April’s energy equivalent (EEmw) was over 26,600 in 2017, but this year the NWRFC is but 15,000 for a mind-boggling delta of 11,000 aMW. Contrast snow levels  this year with last: 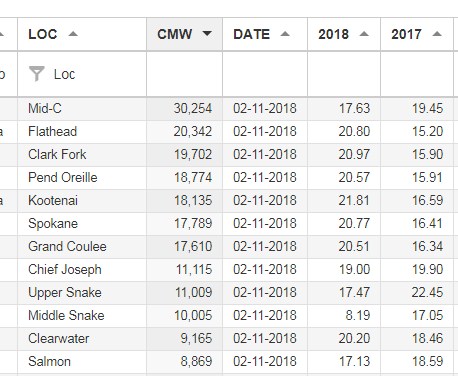 Granted it is only Feb 12, and 2017 had strong late builds, but the current year is well ahead of last year on the same date. All of which brings me back to my original point regarding today’s STP forecast — there is only one direction this is going, and that is up, especially for both March and April.  I’d not be surprised to see the RFC add another 3000 aMW of equivalents to April, perhaps 2000 to March. Feb will be bumped, but not as much, though these Spokane and sideflows may support a bigger number

These lower elevation melts throw a monkey wrench into things as water passed in Feb and March is water not passed in June and July, but it’s not significant, yet.

BPA has posted a couple of new outages in its 14-day, none are of long duration.

There is a new outage in its long-term report on the AC for a few days in March.

See, Canada sold the US energy over the weekend. Perhaps the province is finding itself as long as the rest of the WECC and had no choice, or perhaps they are the swing resource to make up for that 3000 MW wind haircut?

Look at how little the AC was utilized during the solar hours over the weekend – this occurred while Coulee was discharging 170kcfs. Even Palo blew off the ISO, cutting its exports in half. Northbound flows at Path 15 nearly hit TTC  on several hours.

We fear warm weather in the Northwest, what with the mountains of snow in the snowy mountains. But weather stays cool; there are no 60s in Kalispell, so that fear is abated. One critical difference in this year, versus last, is the dearth of low-level snows. 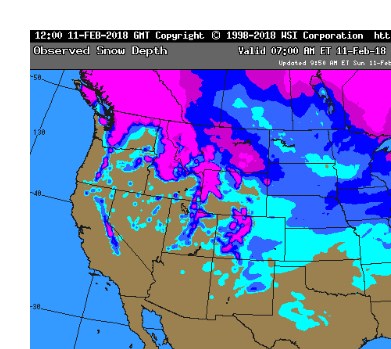 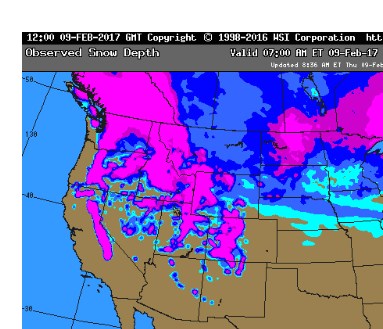 Maybe 70% less surface area has snow this year, versus last. All of that melted in Feb and March and is what crushed the WECC during those periods. It took nearly two months to get snow cover to where it is today: 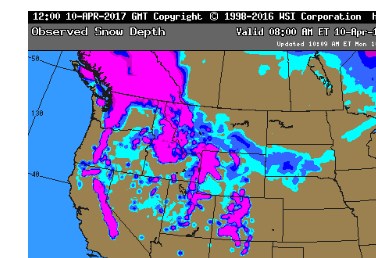