In this installment of the Monday posts, we discuss the market and attempt to superimpose our fundamental takeaway’s upon that market and come away with some actionable conclusions. As usual, I use the APT screen to flag the most significant moves from last week. The last half of this post will address the Mid-C HL bullets. 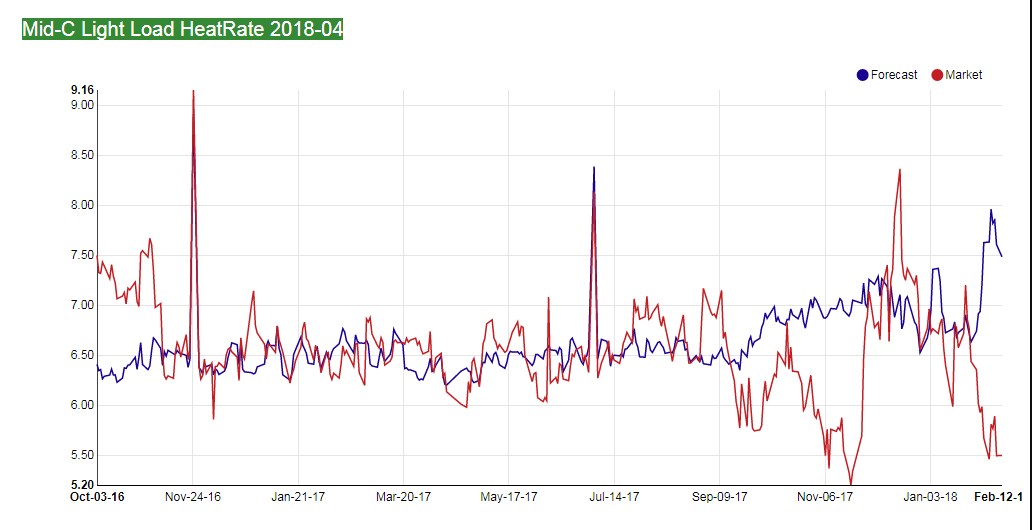 The market destroyed the April LL, now its near a contract low, as well it should be given that snow levels are near all-time highs and today’s STP might be quite ugly for April length. That said, it’s cheap and why sell bottoms? Not when there are more attractive investment opportunities. 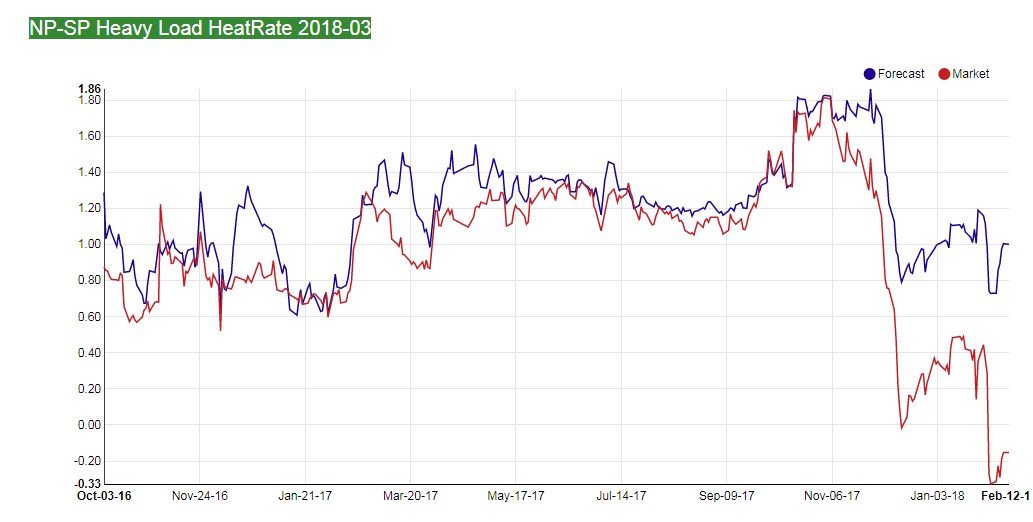 For example, the NP-SP March HL is a contract low. Why would that be in a record dry water year? Perhaps LA is baking in the 90s? No, it’s in the low 70s, maybe high 60s. There is no explanation, aside from a Needles hangover, and we’d be buyers. 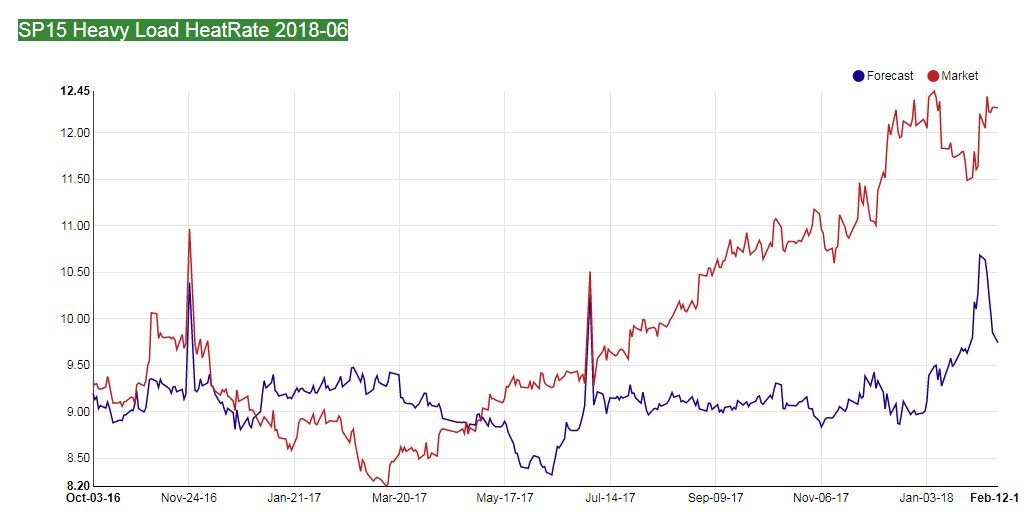 We keep posting these SP outrights and keep shying away from selling them. After all, this is a dry year, and we’ve already seen the mid-80s in LA. Fundamentally, the ISO is looking at a bullish year, and we’d not short much there. Instead, we’d play the rolls. 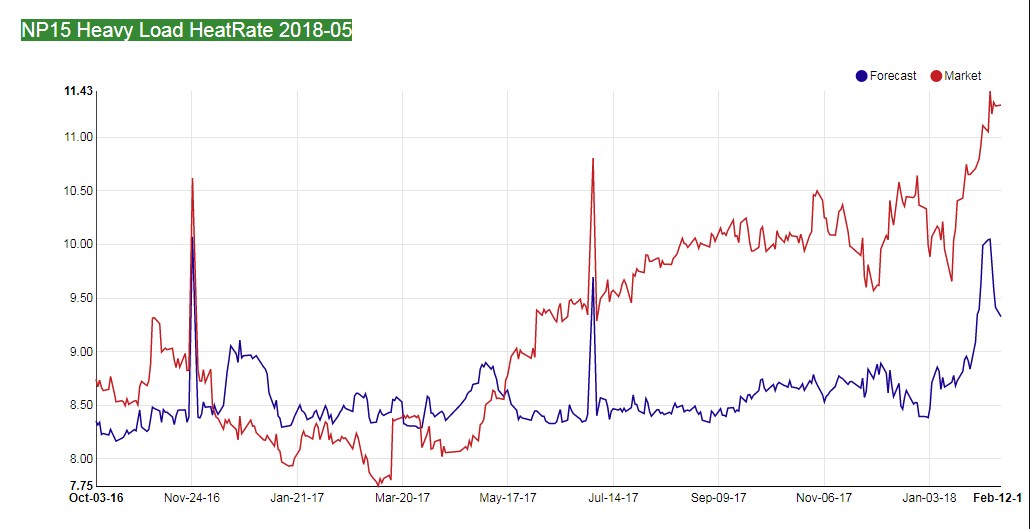 The same story at NP in May, this is a bitcoin, but we lack the conviction to stand in front of the runaway train. 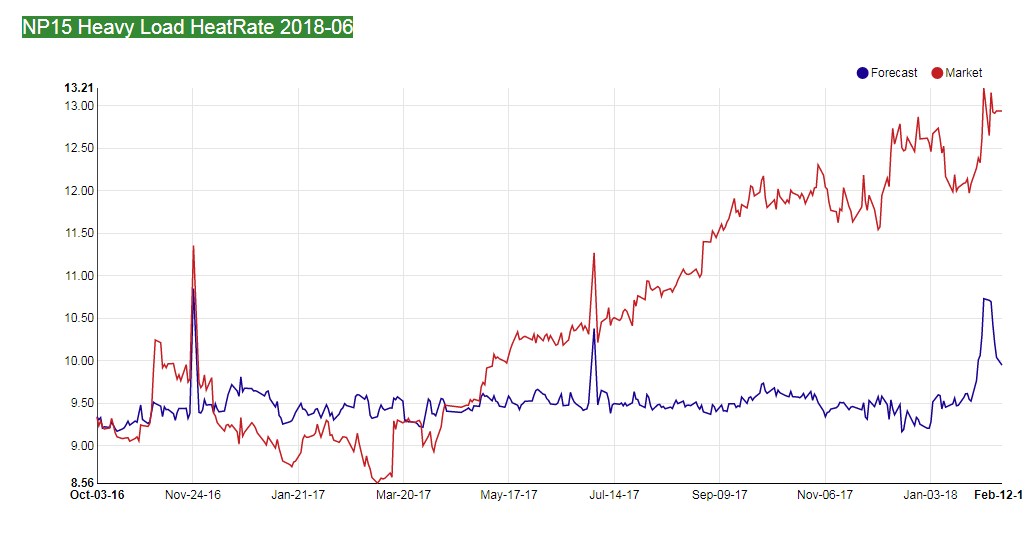 Crazy, but these might be reasonably priced given snow levels. 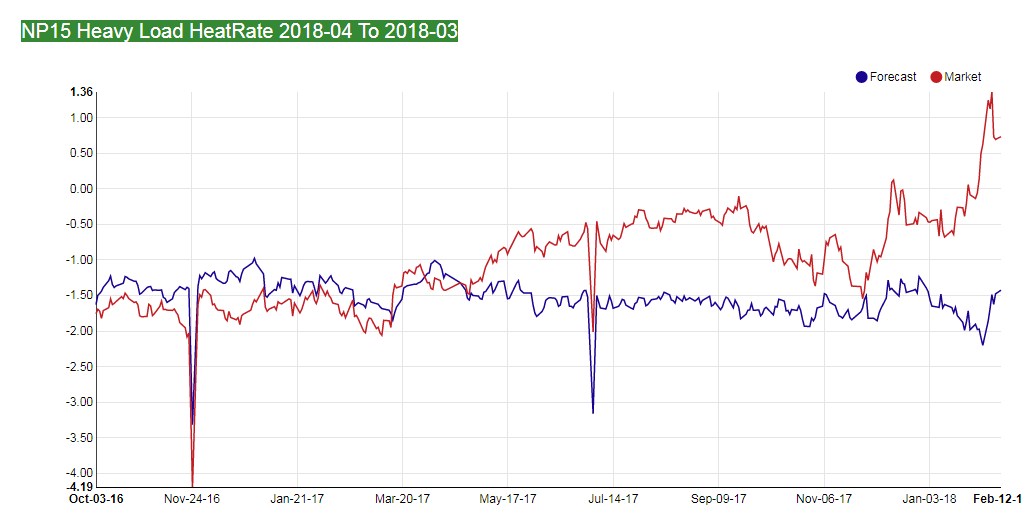 A better way to trade the ISO is via the rolls. The April to March is off the charts, and we’re not sure why. The nuke (DC2) is offline now and will be off for at least half of March, if not all of it, and will be back for all of April. 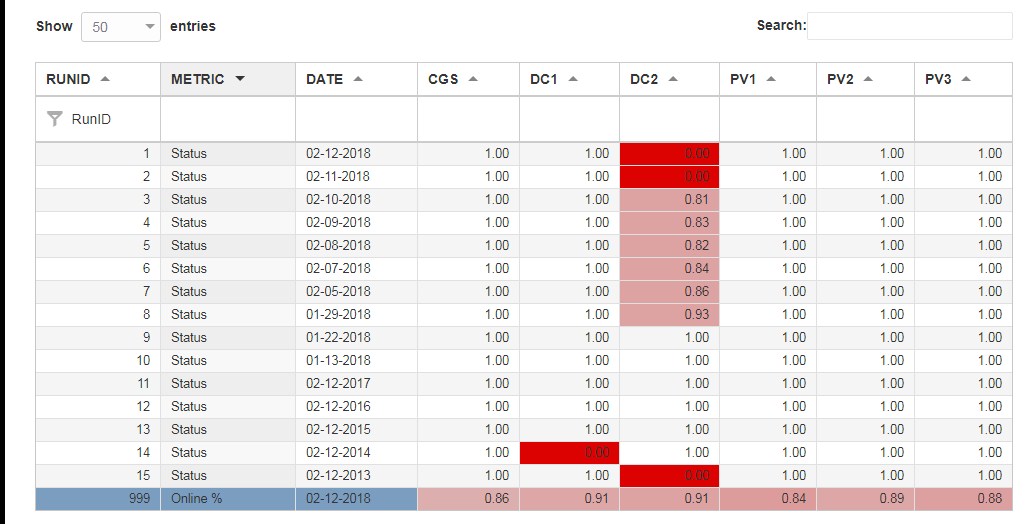 No, this is too high us, and we’d short it more than once. 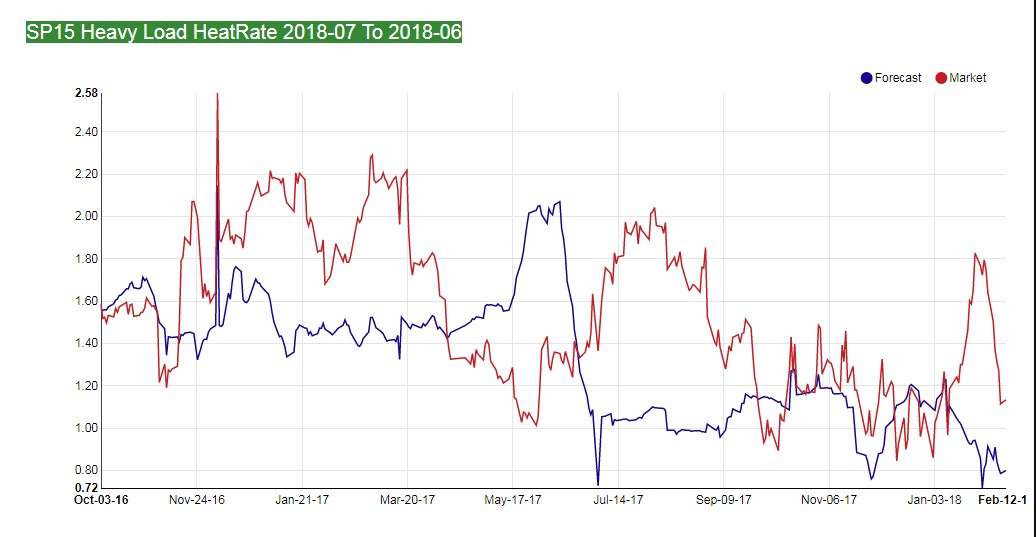 You want to buy something SP, how about the July-June roll which is mired near contract lows. We know July loads are higher and June natural river flows are bigger, and we know the DC is more likely to be full in June than July. But let’s not guess. Instead, I’ll use our forecast for the two months to prove the point:

In fact, our model suggests a 2000 MW increase in Net Demand for July versus June which drives a 3k heat rate delta. By the way, the above plot comes from the new forecast interface that we will be switching to over the next couple of weeks. You can view this by selecting Forecast / Ansergy Power Forecasts – Beta.  If your team would like a walkthrough of this new feature drop one of us a note. 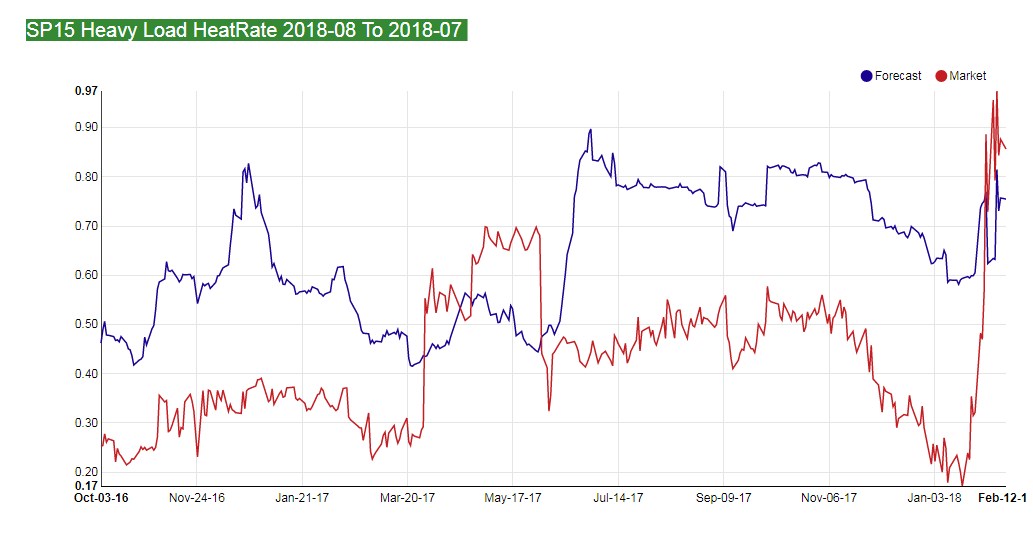 Despite a contract high, the actual roll value isn’t that high; the chart just looks like a short because it was so stupidly priced last month. We’d say its value, maybe a touch rich. 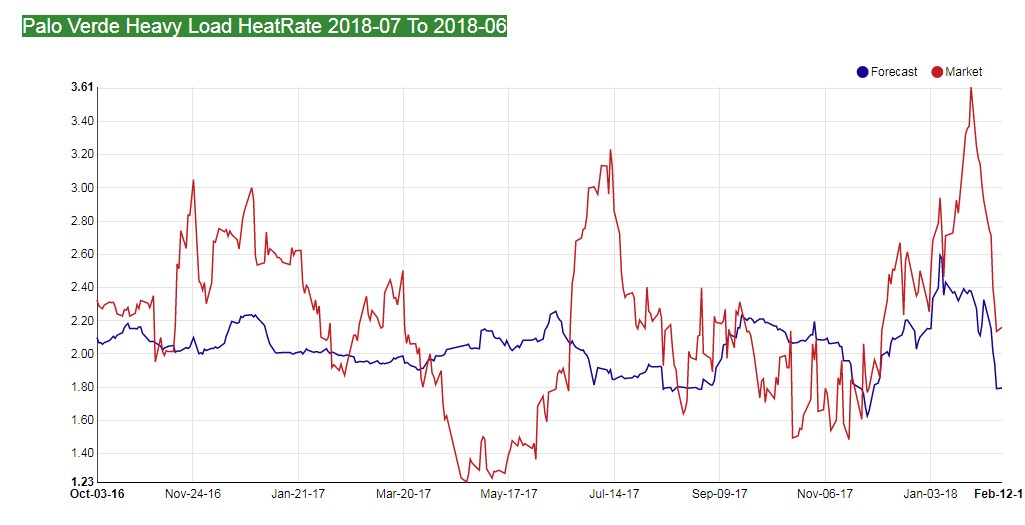 This, the PV Jul_Jun roll, is also moderately priced; perhaps it is approaching cheap again? 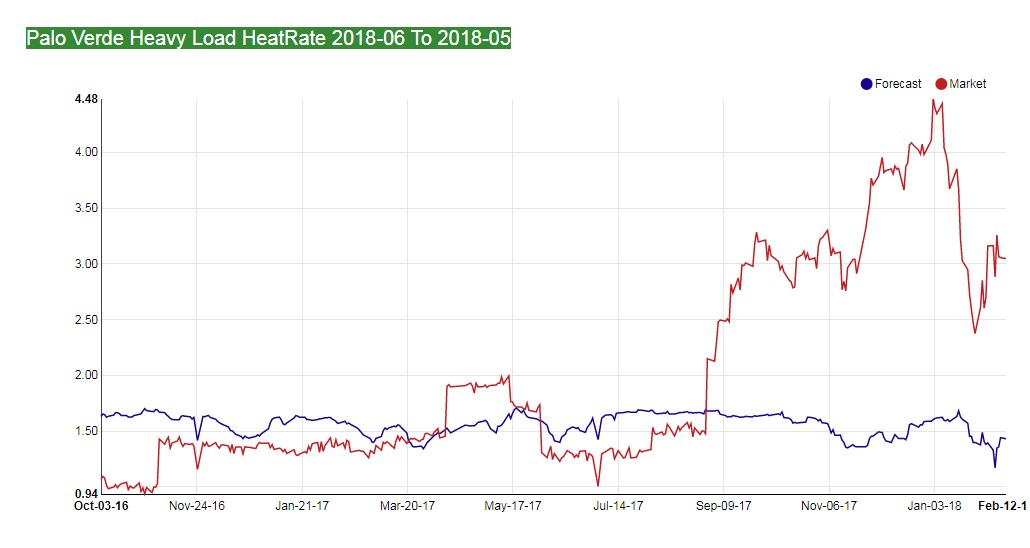 Same with the June to May, after trading almost a 5k premium in April, the roll pulled back. Still a touch on the rich side but not compelling.

It is runoff season, maybe 90% of a trader’s PnL is earned from Feb to June, so we’ll stay focused on this exciting market. 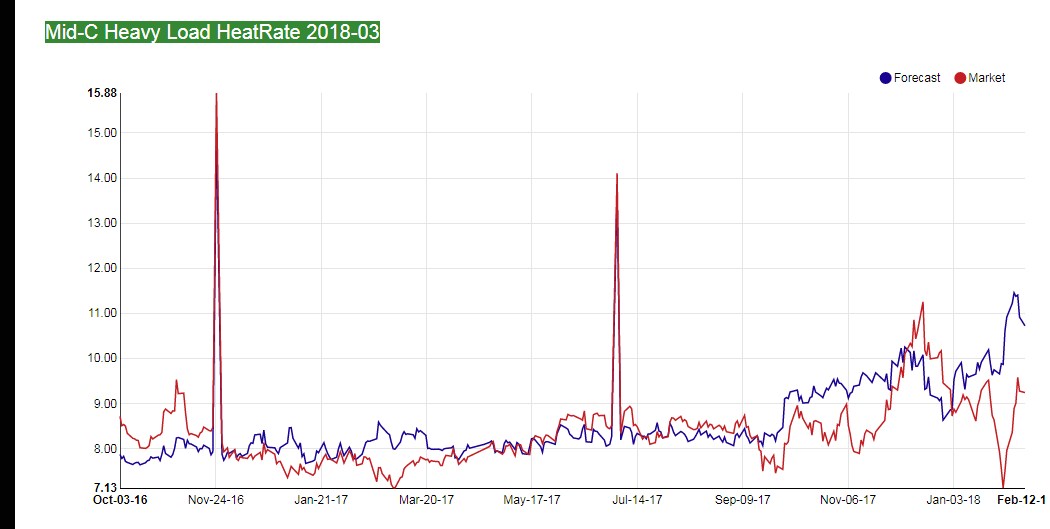 March has rallied sharply off of the odd lows from a few weeks back and is reasonably priced, but if the RFC jacks the STP as we think they will, the SLICE utes are going to find themselves a lot longer in March and will be seeking bids. I’d not own it, if anything I’d sell a piece in front of today’s STP. 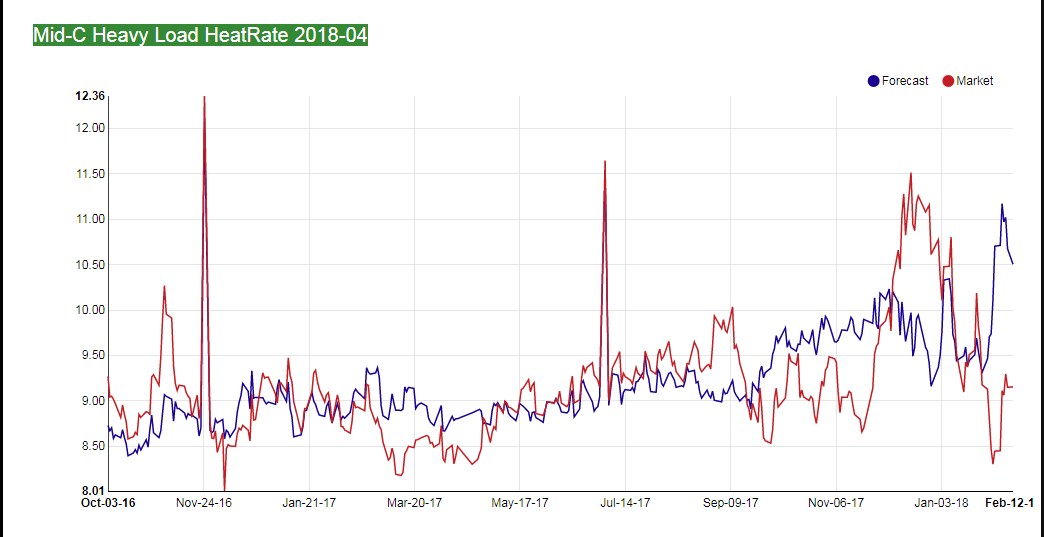 That April rally may be running out of steam after tonight’s STP update. Like March, I wouldn’t be buying this, not when the RFC keeps raising its Apr-Aug water supply which drives more water into April. 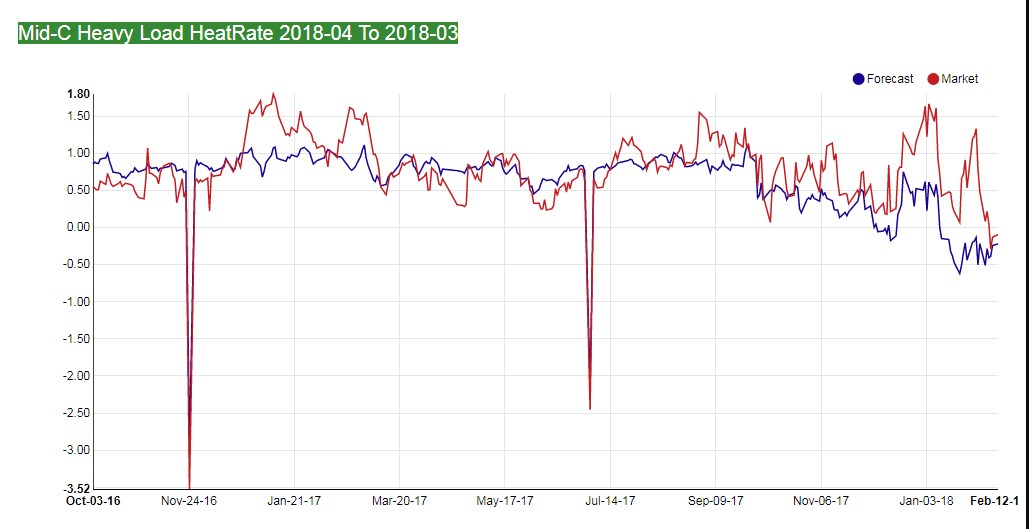 We loved shorting this but now don’t care and would either buy it or ignore it. Bear in mind, even during those 500 kcfs Columbia below Bonneville days last March, BPA was able to keep the gas on the margin. In the old world, April might have traded single digits, but we doubt we see many of those days. Instead, we’ll see big spill volatility. 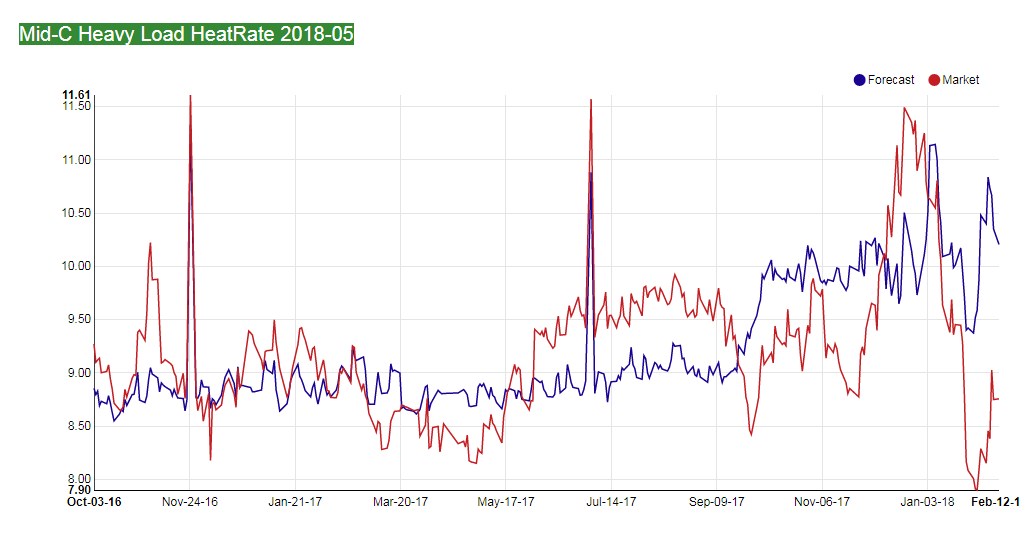 The market got a bit silly when it sold down the May HL off of building snow; all that new snow did was to drive April to draft deeper leaving a bigger hole for May and June to refill. Now that this has moved closer to the one year average we no longer have much interest in it. 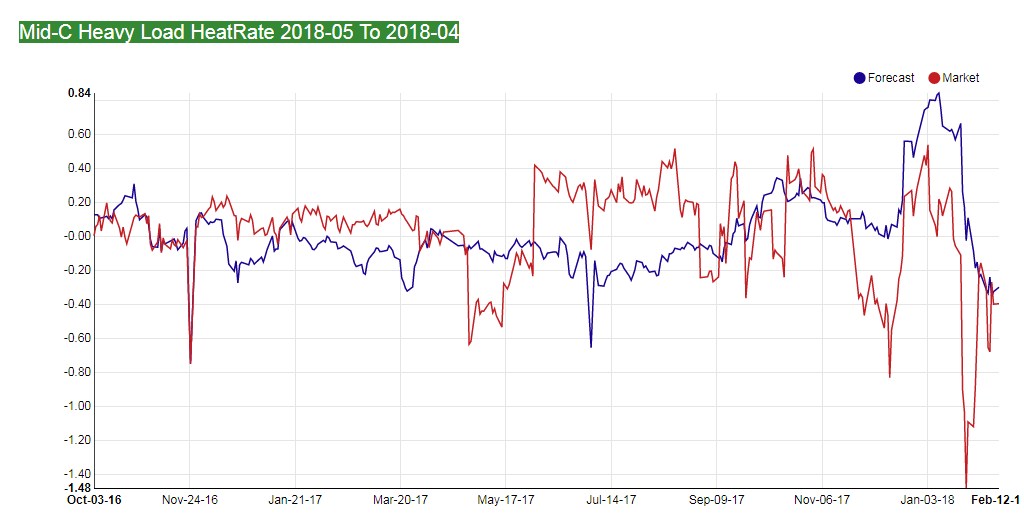 Same story with the roll to April; it was priced ridiculously a few weeks ago, now it is priced maybe a touch cheap, but isn’t that compelling. It will swing again, hard, one way or the other and, when that occurs, we’d jump back in and fade the dumbness. 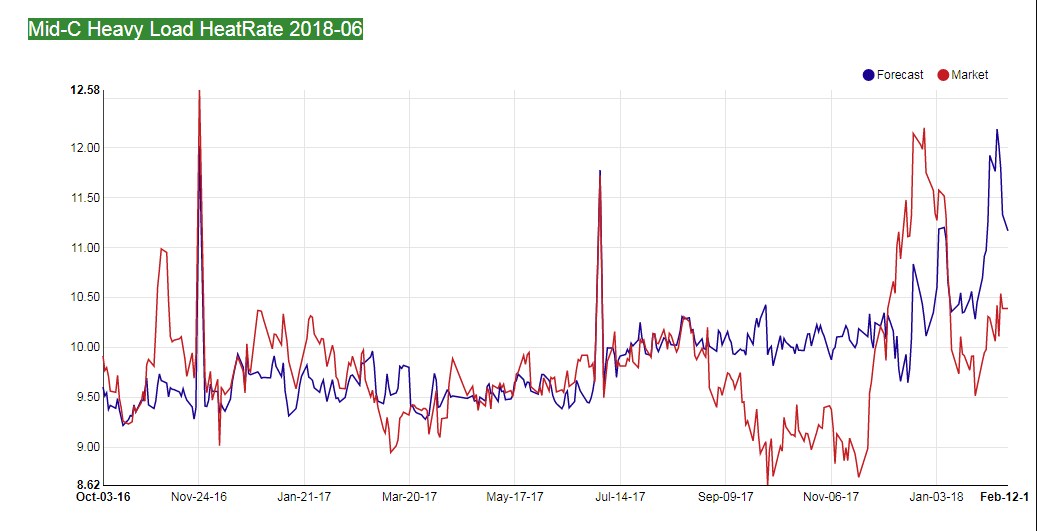 June is exciting because all of these SWE builds above Coulee just extend the runoff deeper into June and into July. Where in an average year you can expect inflows to start fading around the 20th of June, in this year they will remain strong into the middle of July. Right now the bullet is at its one year average if anything it is a bit rich, but isn’t priced at an extreme. 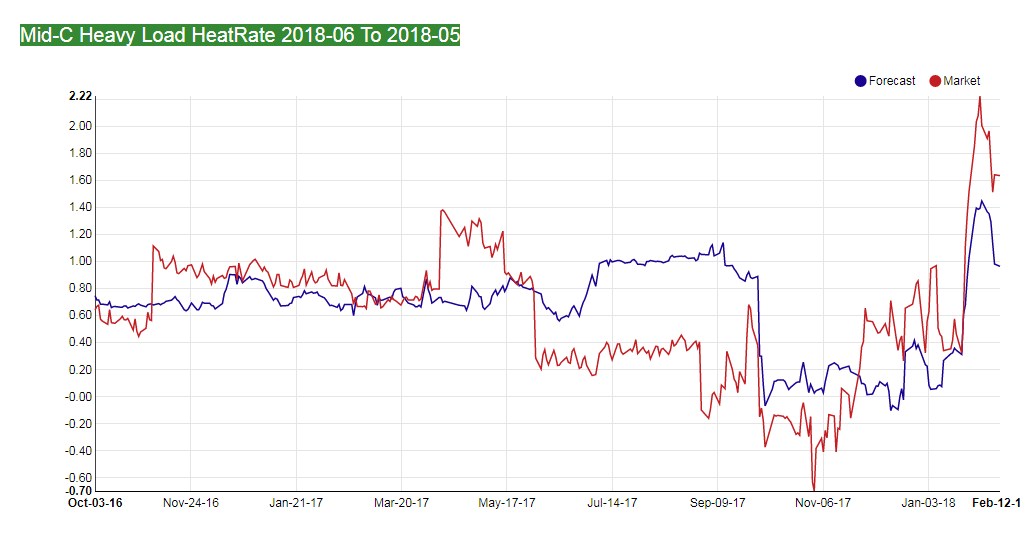 This is extreme, the June to May was a great short last week and is an excellent short this week. Neither month is expected to have more than 500 MWs of gas on the margin: 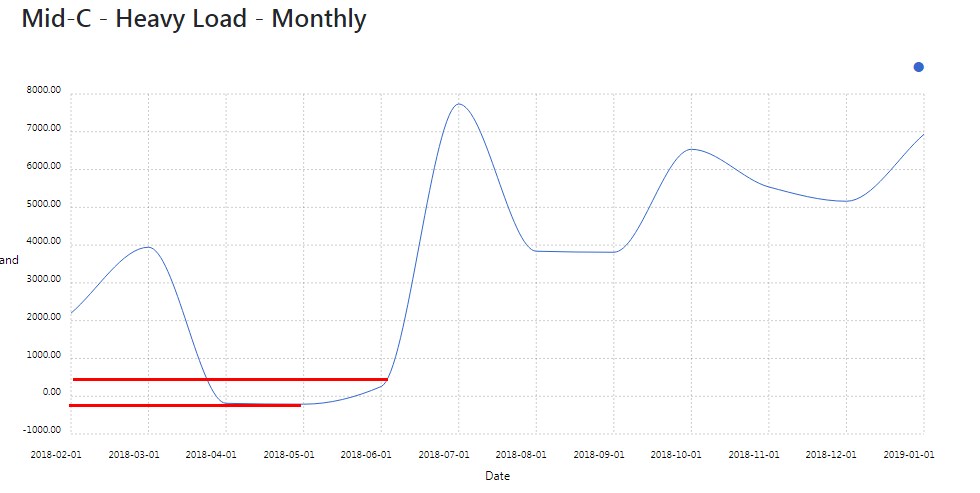 Fair value is closer to 500 btu, June over, but since this has started tanking it’s less attractive. 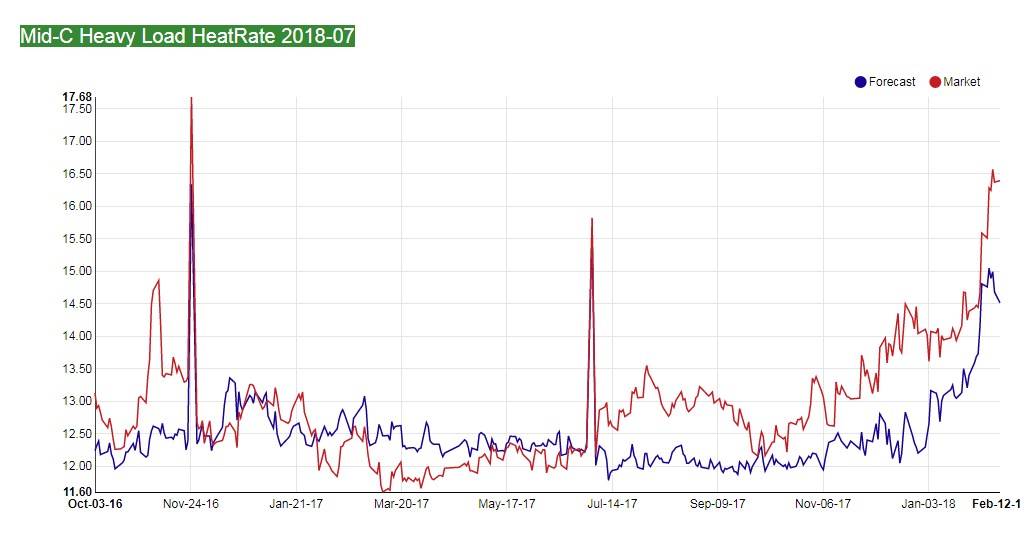 Careful here, these building SWEs are spilling into July, but by the looks of that chart, you’d think it was a 2014 or 2015 water year. No, this is priced too high given what we know today. The saving grace for July will be a very warm spring that knocks down the snow or extreme heat in the ISO and the Northwest. Neither is a certainty; both are a standard deviation from reality, so we’d fade this and short it. 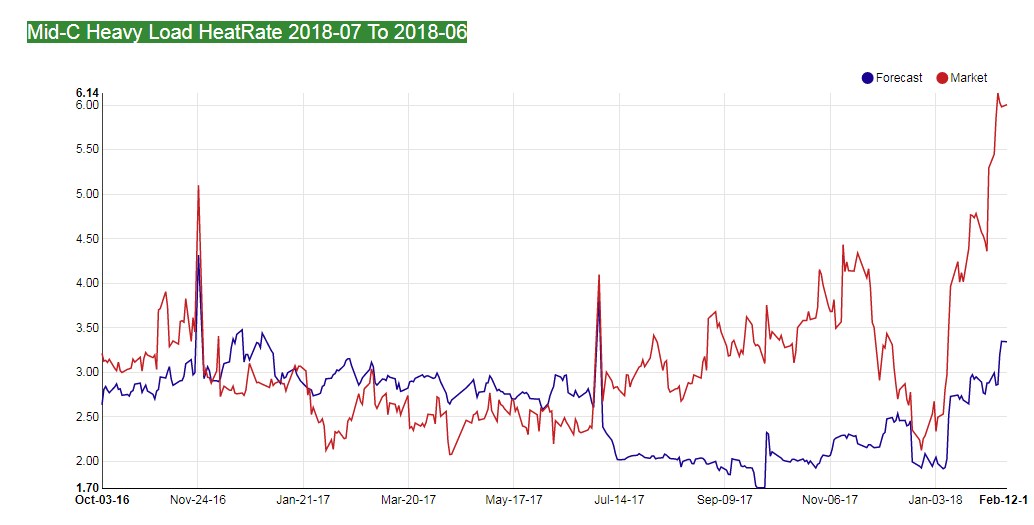 We’d sell this to for the reasons shared above. 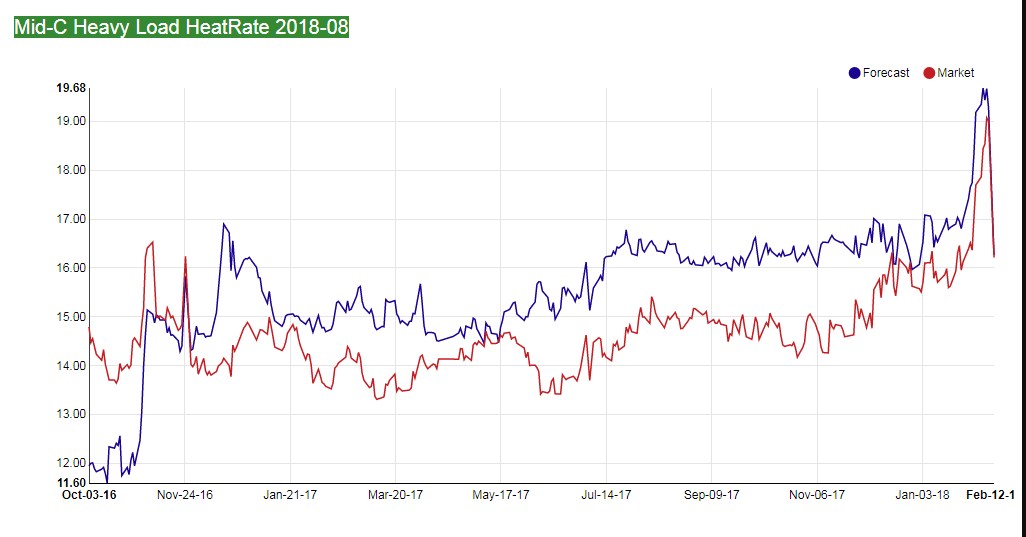 These are gas price moves since both the forecast and market are tanking in parallel. The bullet is reasonably priced now, and we’d pass. 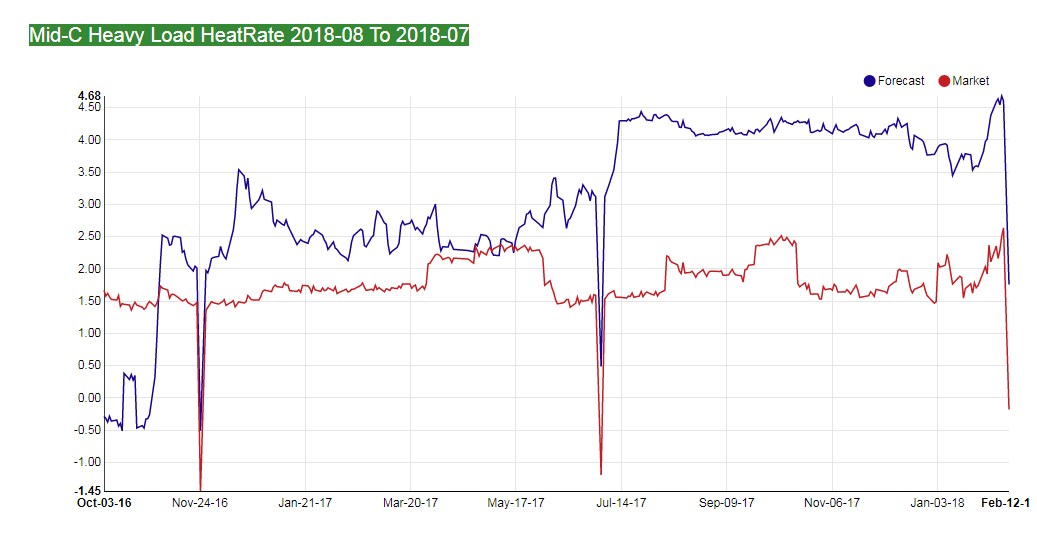 This isn’t fairly priced; every day the snow builds the Aug-July roll should grow, instead it just got dirt cheap. We’d buy.