Lots of news but the biggest is the massive Coulee Flood Control draft released yesterday.

So what? Well, things just got more bearish for both March and April, that’s so what. April now has to manage a 2 MAF draft while March has an additional 1.3 MAF on its hands, plus the incremental drafts on the other projects. But that March draft may be a headfake as Coulee is already down to 1278′ and may well be in the 1260s by the 1st of March. We also believe this will force next week’s STP to reflect the above changes which will drive much bigger energy equivalents.

Neither of those periods is even close to last year’s levels, but those weren’t driven by draft, they were a result of substantial low-level snow, which is non-existent in this year. Still, the flows should reflect the water years of 2012,11, and 08, which as of last Monday, they don’t. Buy, Sell, or just deer-in-the-headlights watch? More on that in a subsequent post to follow this morning.

California gas is relatively strong when compared to the Northwest hubs (Sumas or Stanfield, or Malin). Socal still trades premium to PG&E which one wonders how long that can last given the forwards don’t. 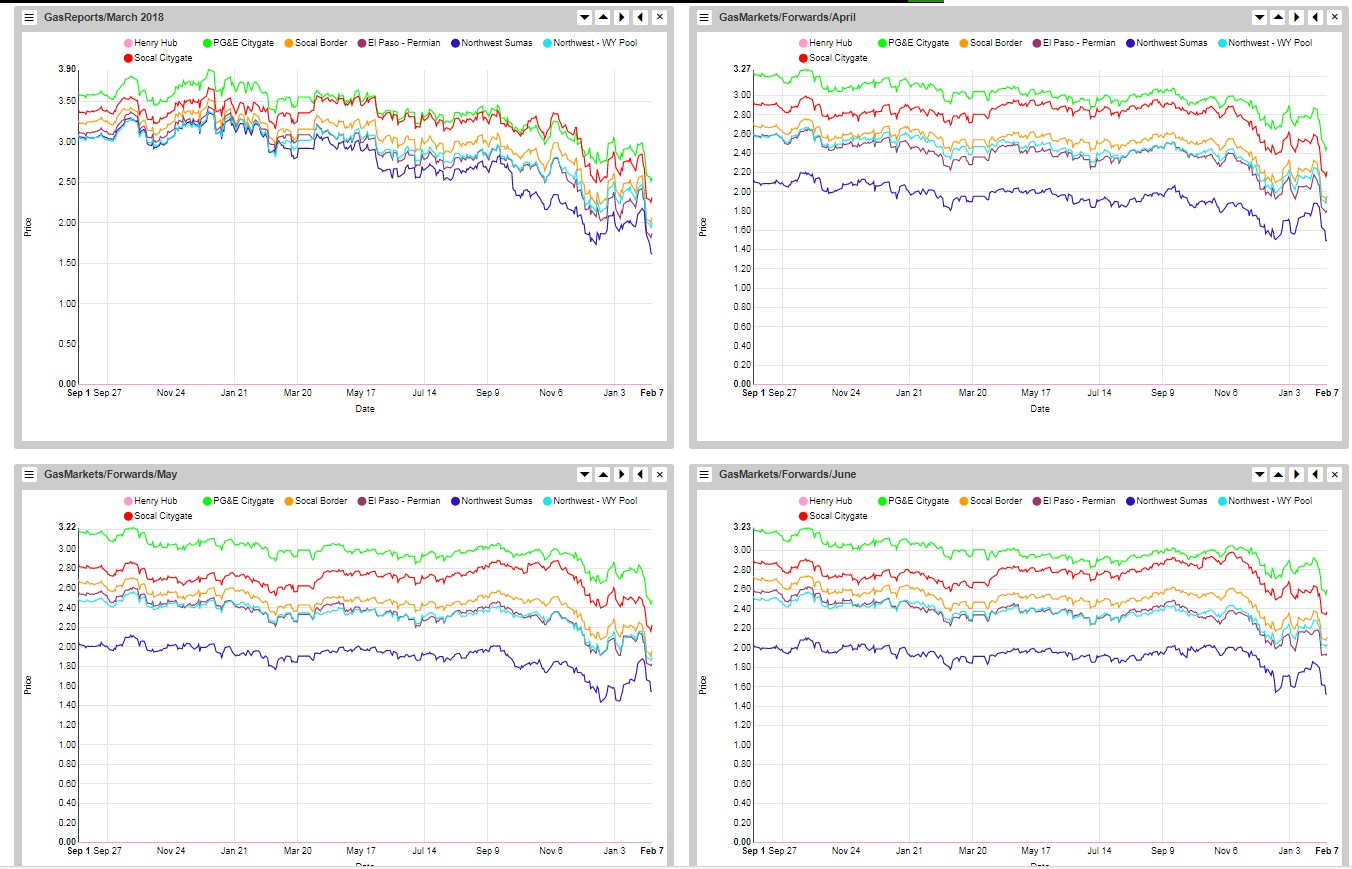 A deeper dive into the fundamentals doesn’t clarify anything:

Socal has 15bcf more gas in storage today than last year; PG&E is slightly ahead. Both are injecting; there isn’t enough demand to soak up what’s flowing: 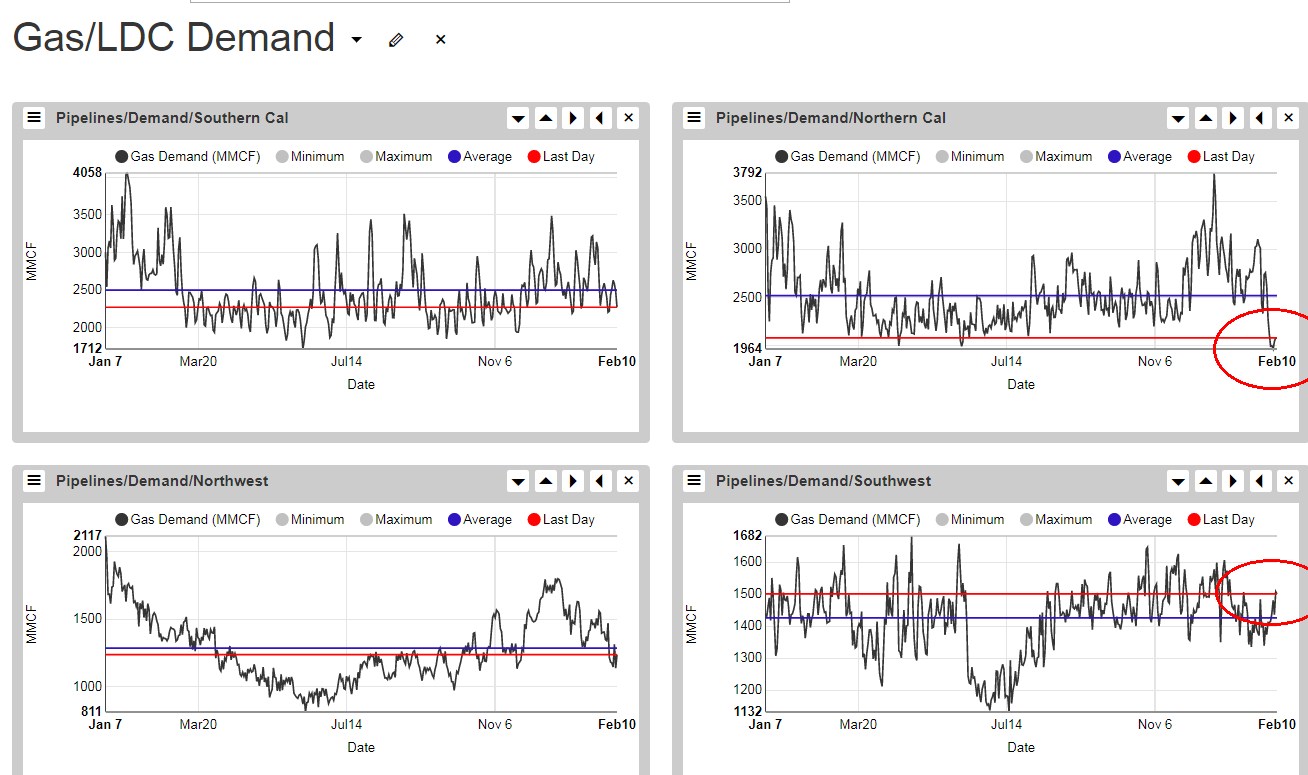 PG&E’s demand fell off a cliff, now it is at one-year lows, but none of the other zones are much better. In a word, Bearish.

That said, the DA markets rallied over same day last week, though the Palo node is enjoying big congestion; surprisingly Capt Jack isn’t congesting, but NOB certainly is in the HA:

Check out the string of Monday hours that traded at -150; nearly 12 hours straight. Too much Northwest energy was trying to find a home in LA, not enough LA demand.

The HA markets, aside from the freak show at NOB, are surprisingly in sync with DA, and again, Captain Jack isn’t congesting, I suspect mostly because the line is derated? 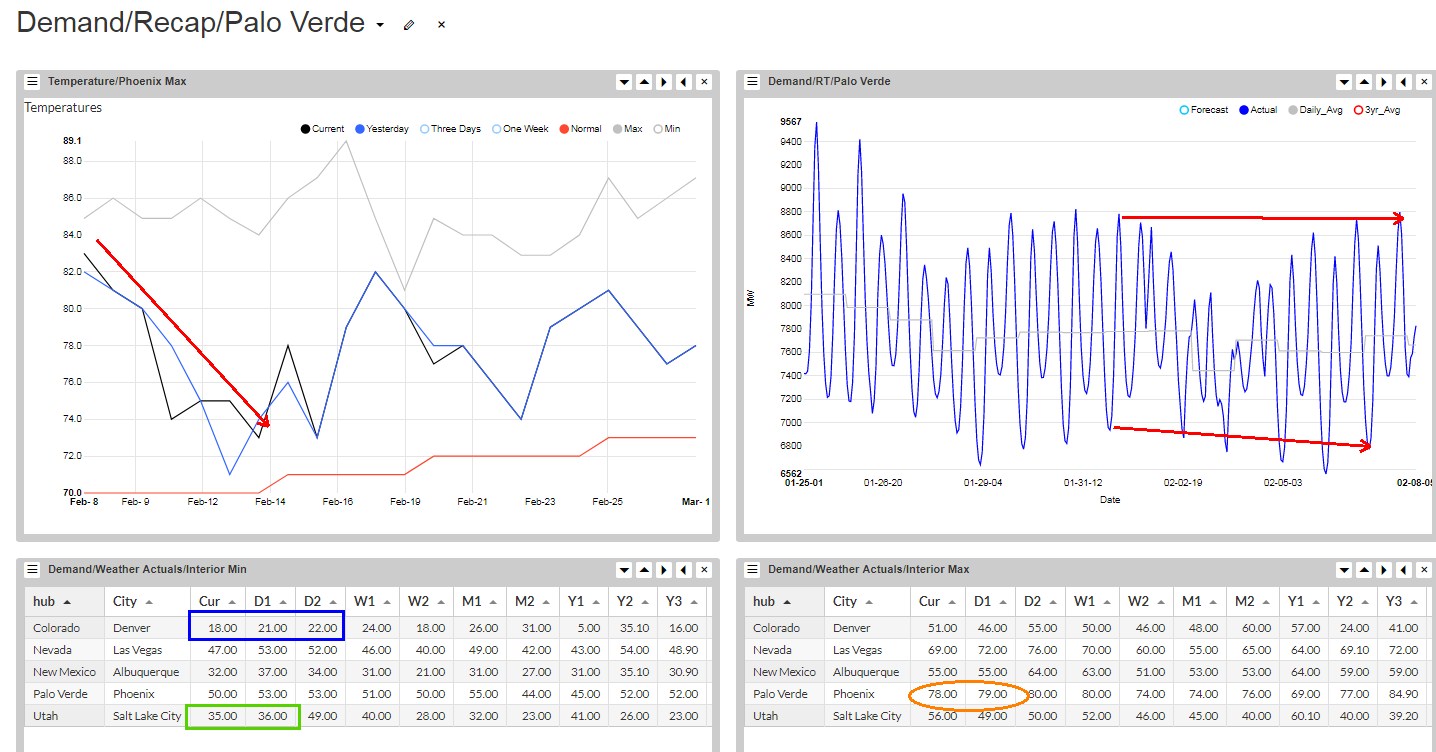 Summer is over in Phoenix as the city braces itself for the low 70s; the golf courses will be giving away those 7:00 AM tee times, way to chilly for golfers. Loads are mostly sideways; the troughs are down more than the peaks. Denver is bitter cold, but it stops east of the Rockies as Salt Lake is mild and they are probably golfing there, too. 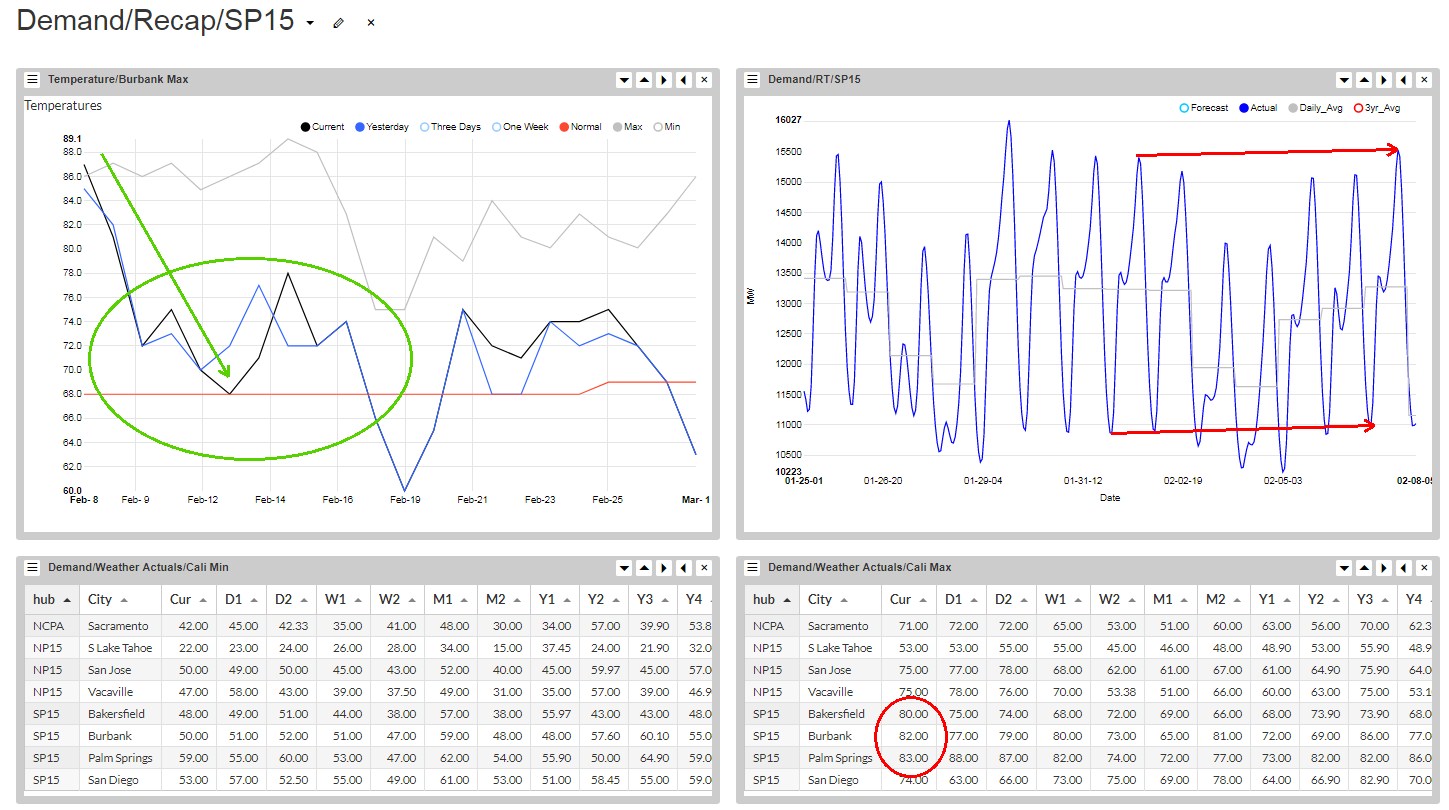 Burbank banked low 80s for a couple of days, and it did nothing to loads. Now that fair city is set to see temperatures plunge to the high 60s (lows in low 50s) which should support spot gas prices. Socal loads are sideways. 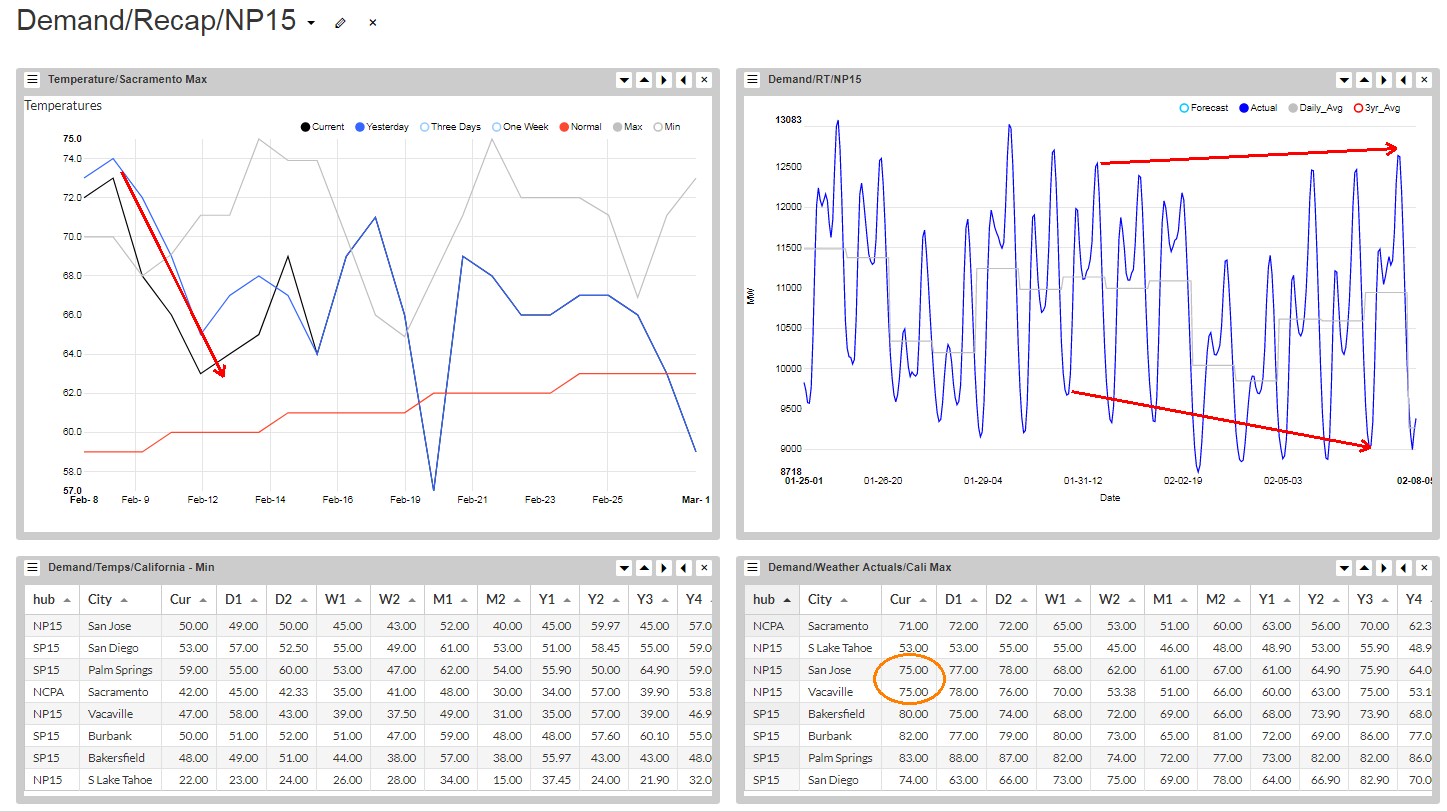 Northern California cools down, too, but doesn’t even come close to average temperatures. If anything, NP just gets more bullish and  PG&E citygate will realize more gas demand. 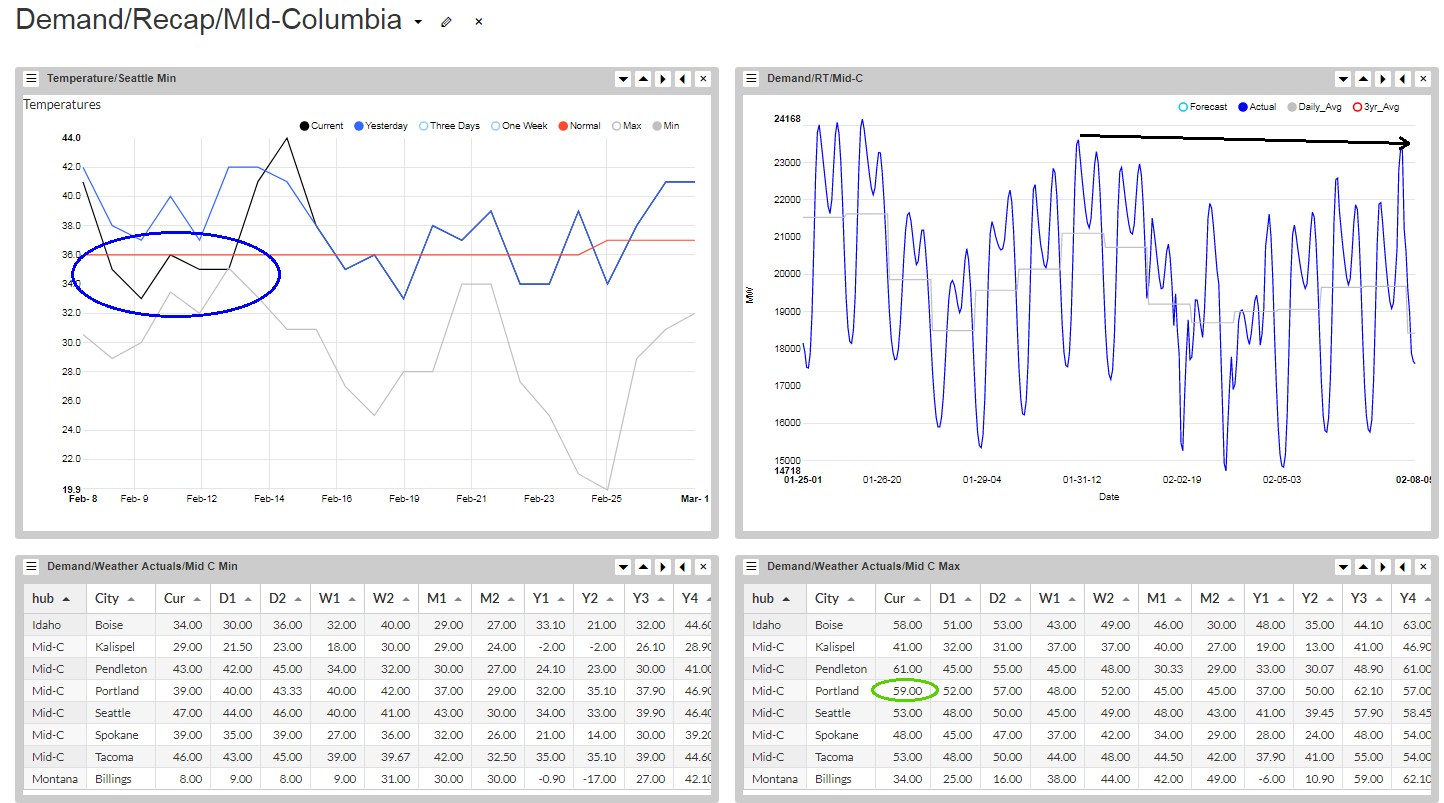 A cooldown in the Northwest (Seattle in the plot above) is bullish, and loads shall rally a few thousand MWs. As things stand today, loads are just sideways, week-on-week. Also, take note of the days beyond Day 8, the Emerald City is set to be normal for the foreseeable future which is about ten degrees colder than the last ten days. A general firming up of a very sloppy power hub. 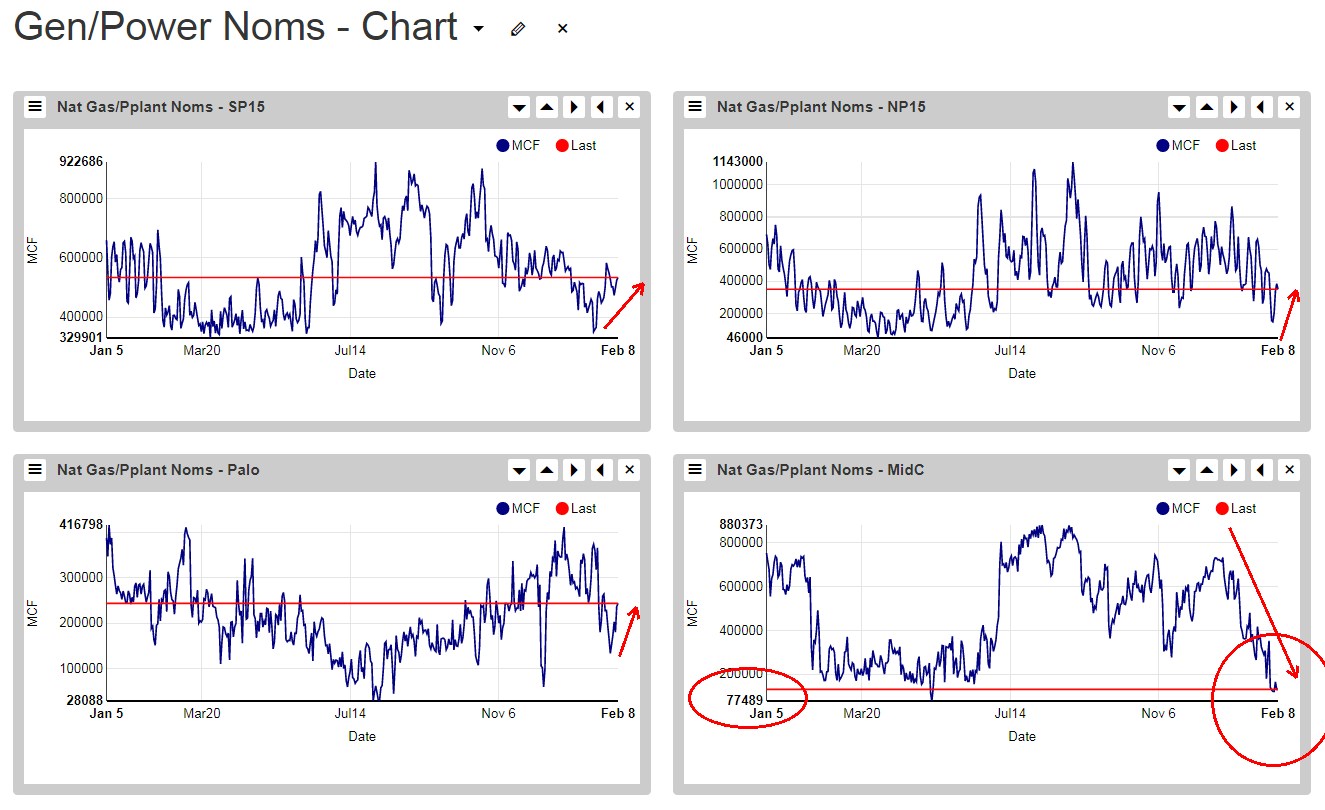 We said sloppy, right? Take a gander at the Mid-C gas nominations for power plants — those are realizing a bitcoin-esque drop. The other hubs have shown a slight rally, all off of those ten degrees warmer than average days, which are falling by the wayside. Expect all four of these plots to reverse direction next week: the Mid-C will rally, while the other three drop. 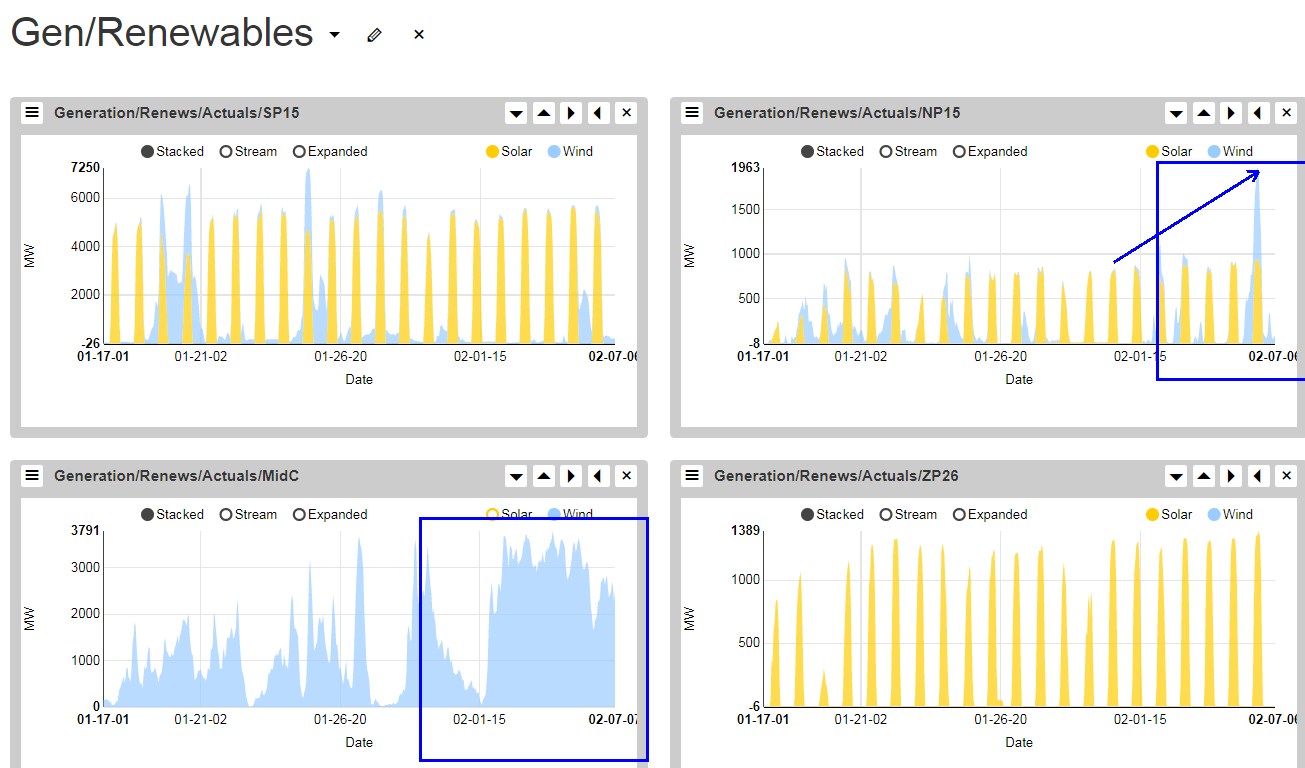 Well, this is a problem. The Northwest has seen relentless wind which blows if you’re long. Even NP saw its renewables soar, but for just a few short hours. That 3000 aMW block of Northwest wind literally took the wind out of the Mid-C sails, coming upon the derates on the COI. Thankfully, our friends in Canada saved the day by buying. 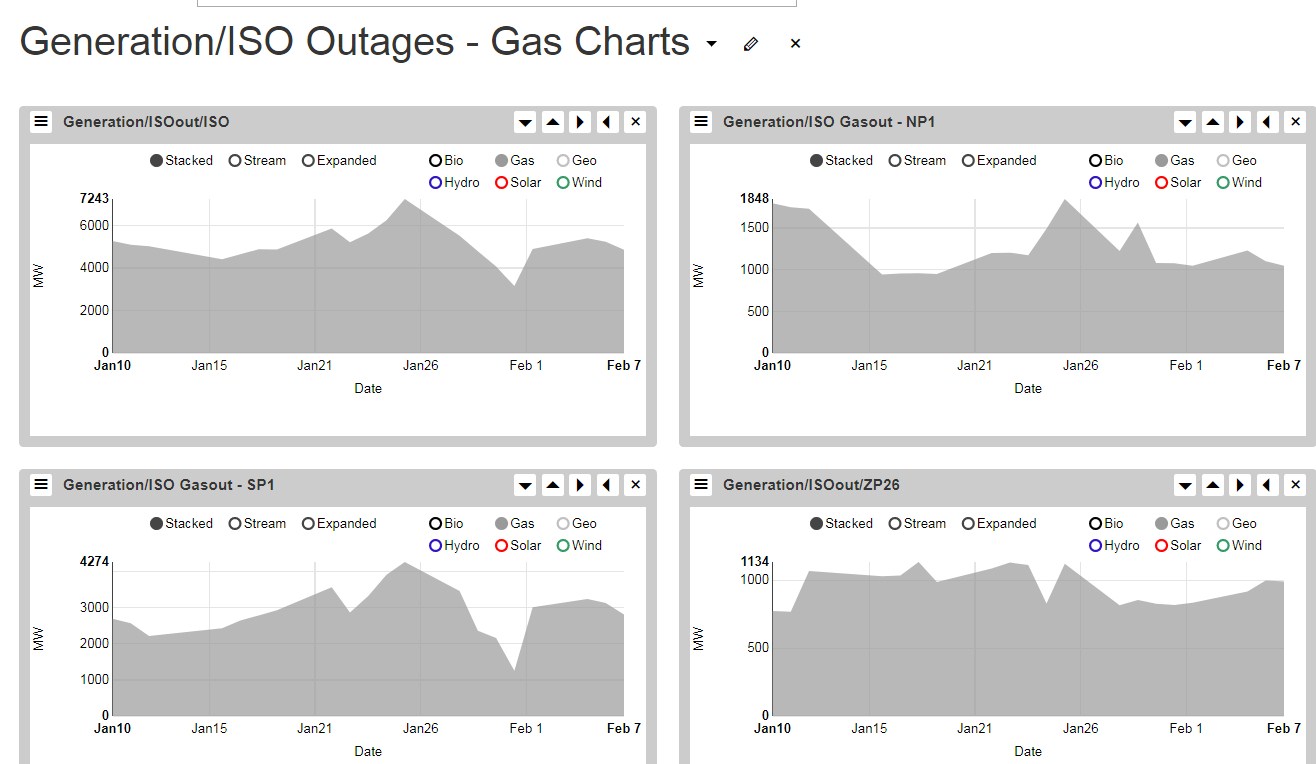 Nothing to say here, outages (gas) are sideways in the ISO. 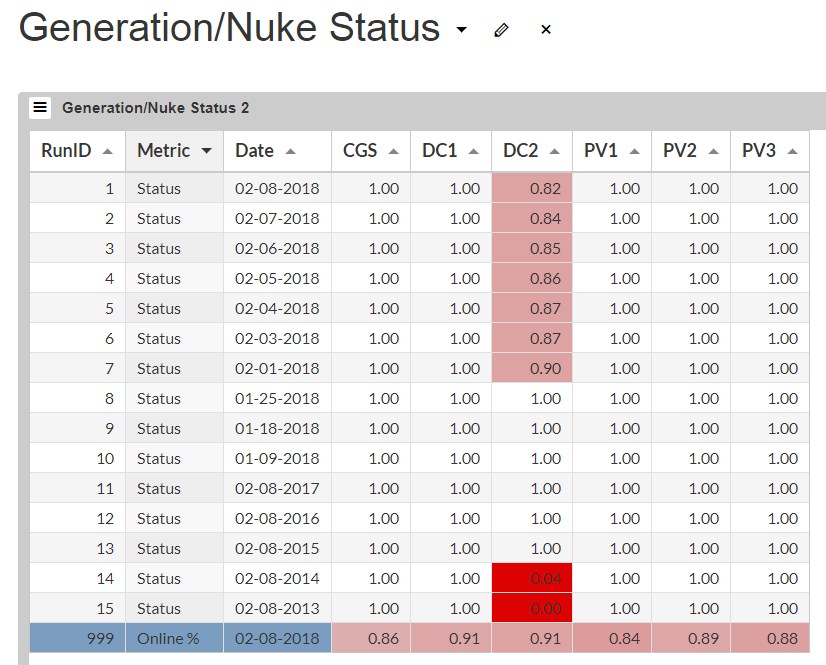 Diablo #2 putters along at 80%, we think she’s heading into a refuel and couldn’t come at a better time for that battered hub.

Energy output inside the ISO has drifted sideways off of regulated discharge. There hasn’t been any precip for a few weeks, and there isn’t any in the near horizon, either.

Well, let’s caveat the above by saying there isn’t any precip where they need it; remarkably, Burbank gets more than Lake Tahoe. LOL – “Brown is Mellow.”

Water Year’s move glacier-like, these are cumulative events that over time have massive impacts on the markets. The trend of late, at the Mid-C, is a very dry outlook. This has been ongoing for the last week and now extends out another ten days. Granted we are sitting on a tremendous water year today, but we are but 65% through the year. The year could grow even more significant, that is what happened in 2008, 11, and 12; or it could just go sideways, and we’d end up with normal, and BPA would find itself over-drawn on its reservoirs, and May-June might look like bitcoins. Too early to make any call, except fade big anomalies – more on that in a post to follow. 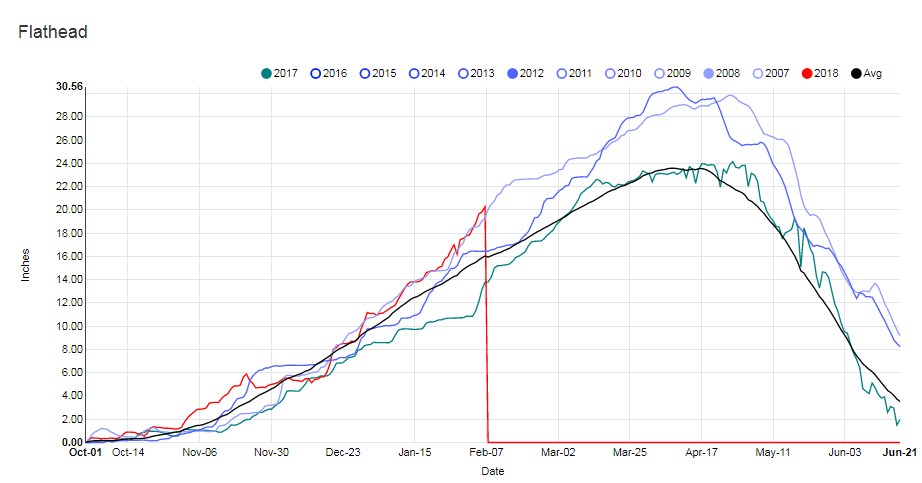 We mentioned some past water years, the above highlights how much more snow can be added in a late-build year, like 2012. Currently, 2018 is precisely on track with that year, but ’12 added another 10″ from now til peak. Point being, still too early to make the definitive call. However, we now know that upstream projects (Libby, Horse, Arrow, Duncan, Mica) are all going to be drafted like its a 110% water year. And we also know it is dry for ten days. Plot thickens.

It looks like every person in the Northwest flushed their toilette at the same time, and Lake Roosevelt dropped a foot. Surprisingly, despite the steady drafting, discharge at the power plant has hardly moved, all of which suggests  relatively weak inflows. With no healthy natural river flows expected (dry plus colder), any change at Coulee will be 100% regulated. We don’t expect to see any net change in discharge, all of which makes us kind of bullish Feb MidC, which must make us somewhat bullish March MidC, too. But everything is relative to market prices, let’s hold that thought till we look at those.

This is a recap of Ansergy’s internal water supply forecast versus the RFC’s. The takeaway is the two models are in sync, except on the Snake. Still, both suggest significant snow and they are right, but we are but 65% through the water year.

These derates don’t help the MidC longs, but they are short-lived, and we’d just ignore them from a term perspective; you virtual traders don’t have that luxury and they’ll wreak havoc on your trades. 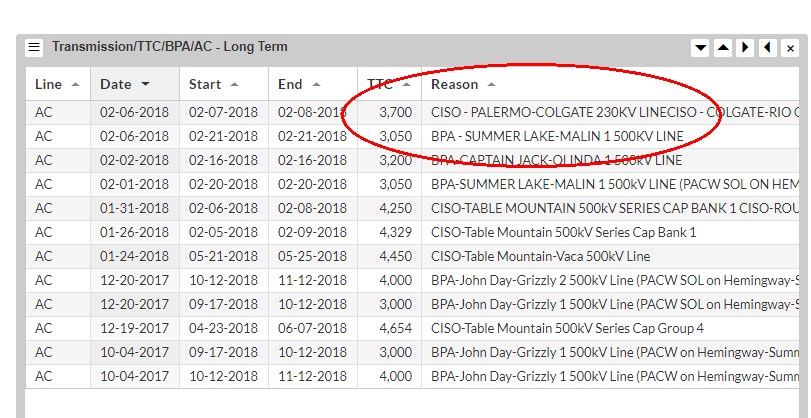 A couple of new posts in the long-term BPA TTC reports, both of which are reflected in the chart.

The above is a recap of the new OATI  report; this is the change from yesterday excluding BPA lines.

Canada loves our cheap energy, that country has been a net importer of a thousand large for the last week. California loves the cheap Northwest energy too, the lines are more full than not, and now the COI TTC is down to half its capacity. Palo flows are off, probably because the AZ utes are sick of paying the stupid congestion charges. You can only snub someone for so long before they return the favor – just ask my wife.

Flows on Path 26 are strong as that zone of surplus serves the mini-heatwave in LA.

Nothing is simple in the land of power. If it were, the average power trader’s job tenure wouldn’t be 18 months. The Northwest is bearish today, but some of that is explained by the 3000 aMW of wind that blasted the region over the last couple of days. High pressure suggests low wind, the colder weather will drive demand up, and those tranny derates are short-lived. The south grows more bearish off of falling temperatures but remains tinder-box dry.

We’ll look at the market next.