This is the second installment of the Thursday post where I discuss the term markets defined as the Qs. Following that, because we are in the throes of the runoff, the MidC bullets are examined.  Both reviews use Ansergy’s proprietary APT service bundled with our TradeRank. Click the links to view.

The following products are in order of rank, not all are discussed, just the ones I found most interesting. Log to APT to view the full list. 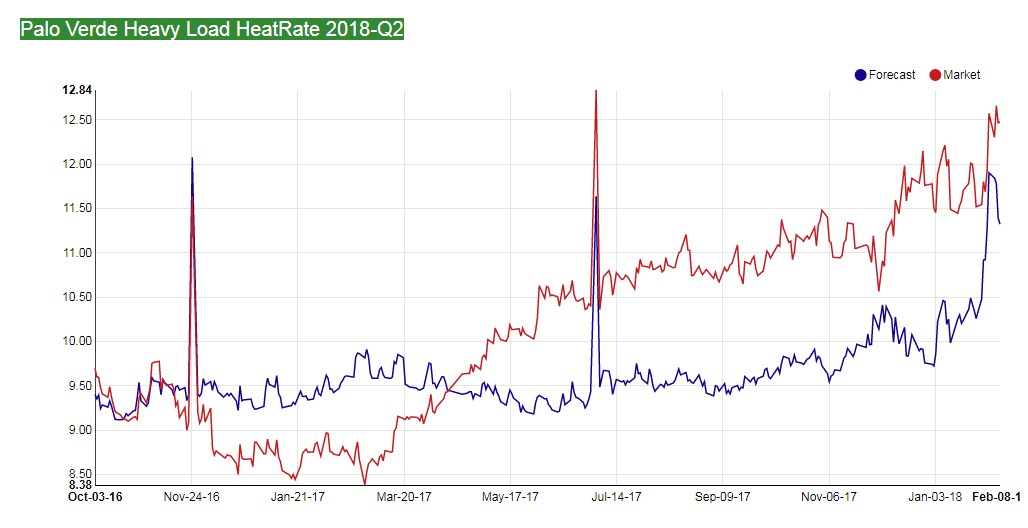 The Palo Q2 HL remains at a contract high, but the forecast pulled back. Both rallied in sync last week suggesting this heat rate move was gas-driven. However, the forecast pulled back, and the market didn’t. These are lofty levels, well above contract highs, and we’d be inclined to short here. If we were a long genco or ute, we wouldn’t even think twice about liquidating some of that length at these levels. 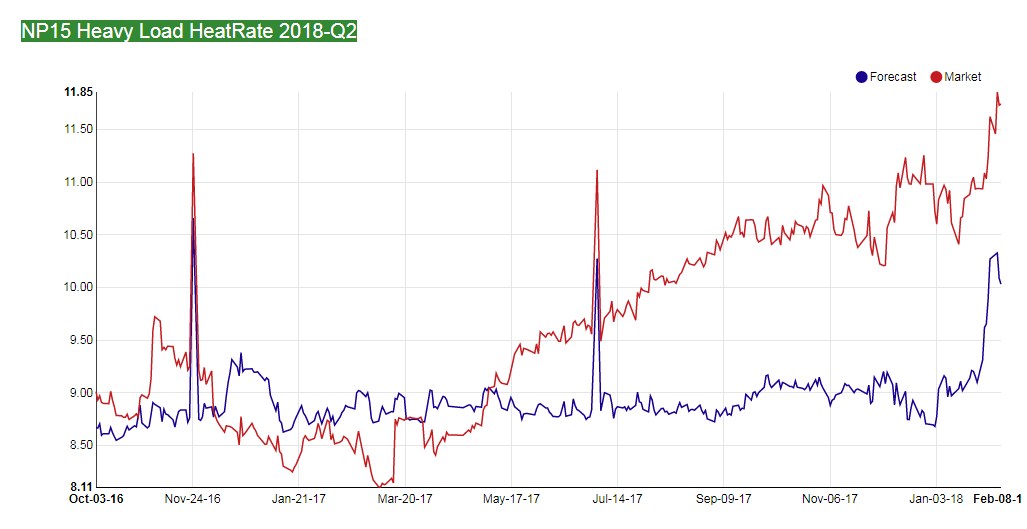 Same product, NP instead of PV, and another contract high. We don’t disagree as strongly at NP as we do PV because of the dire water year in  Nocal. The market knew nothing about WY18 three months ago; now we know it will be a near record dry year; of course, the product should trade near contract highs. 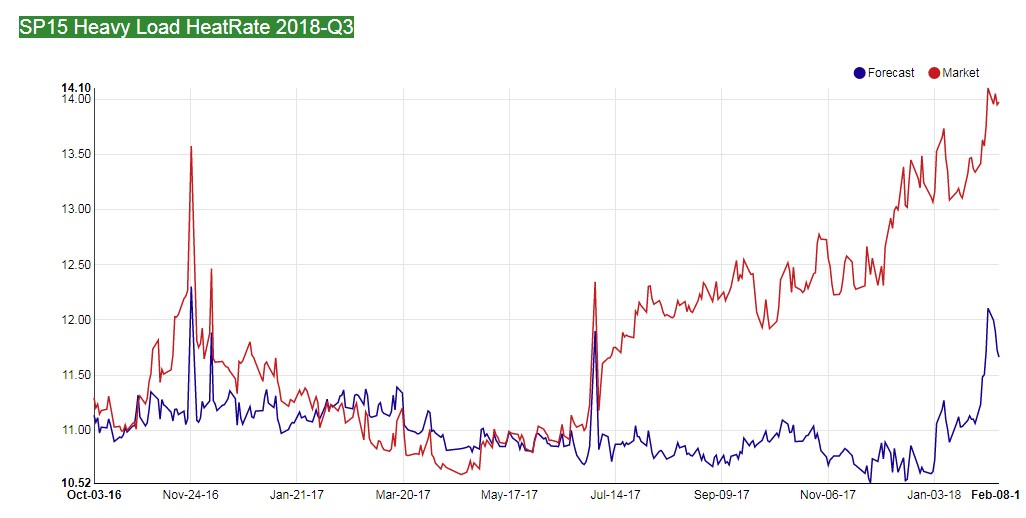 Note the more substantial pullback in the forecast vs. market; the recent move was all gas-driven. That said, we aren’t shorting Q3 SP and think there are much better places to park var. If we did end up short here, it would be off of a derivative. 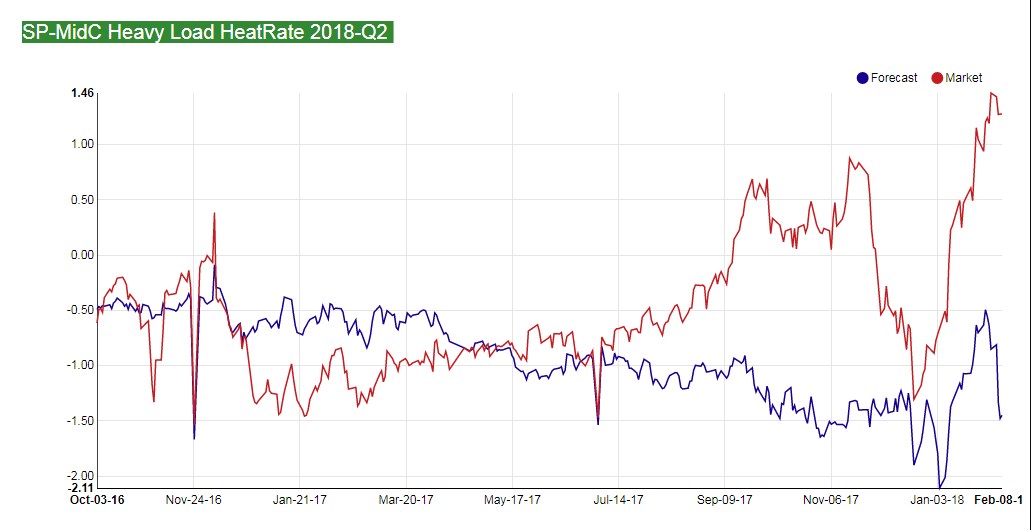 This is interesting, the Q2 spread sets a high and just barely pulls back, the forecast tanked (off of gas). Given the significant water year, maybe its priced right? Not so fast, cowboy. Big snow means big draft means big refill. Since we know nothing about the timing of melt, but we know deep draft, the MidC Q2 (ignoring April) all of a sudden takes on subtle bullish hints and warrants fading extremes. This is extreme, and we’d short it, modestly. 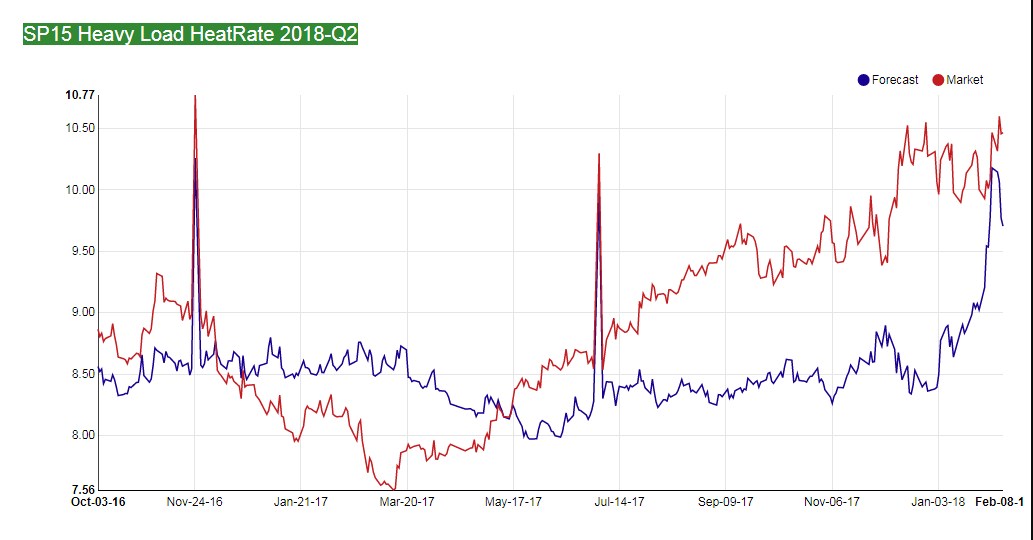 This casts more light on why the Market To Forecast spread widened; the MidC heat rate has rallied, and the SP didn’t budge.  We feel like we are on the MidC precipice, staring either down into a very bearish chasm, or up to the canyon cliffs. It is a big water year but makes one recall the start of the energy crisis – 2000. That was a huge water year on the same day of the year, and look how it played out. 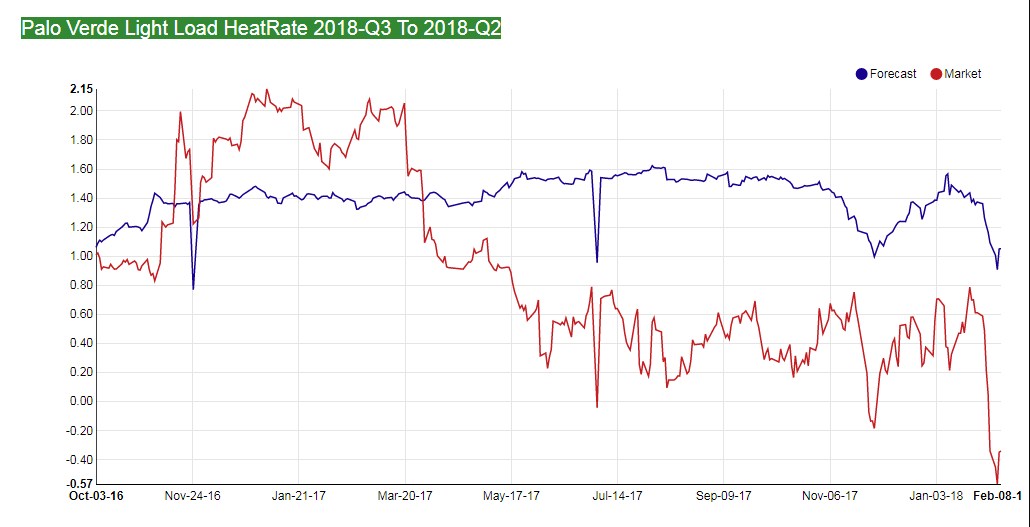 Find anomalies and pounce; here’s one, the PV Q3 to 2 LL roll. Either these are awful marks, or this is the buy of the month. Q3 LL trading less than Q2? Huh? 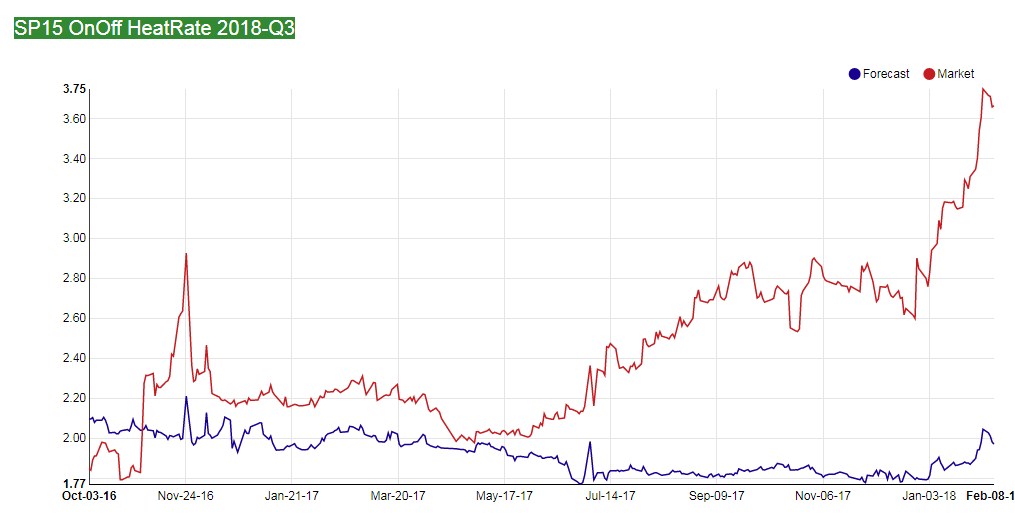 At some price, anything is a sell, and this Q3 SP on|off feels like it is there. Recall, dry water year’s impact LL, too. What has changed from six months ago, besides the price? Only the amount of snowpack. We’d sell a piece. 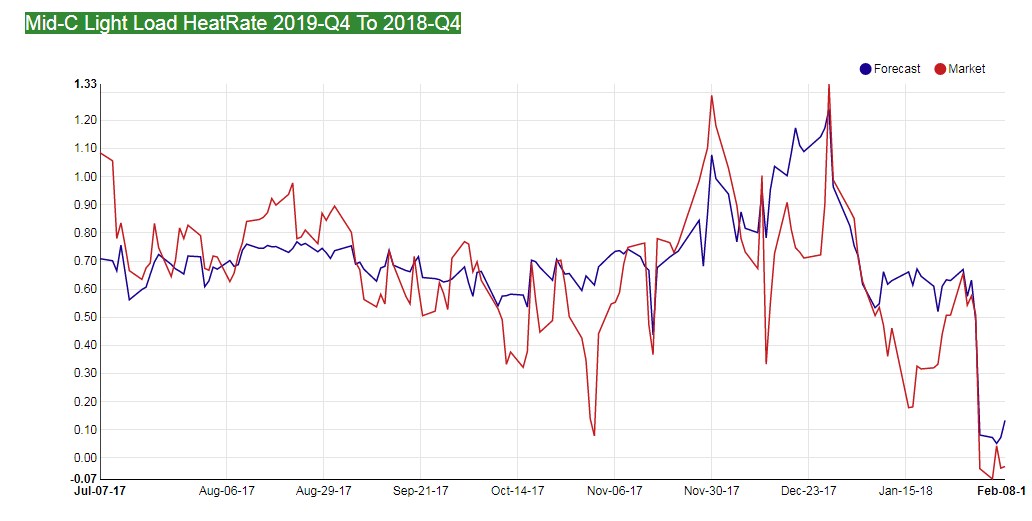 This is a year-on-year roll at MidC for the LL Q4 and is an anomaly. So the market likes the near Q more, which we think just the opposite. All we know now about 2019 is normal and we know 2018 is wet. Maybe its DC outage driven, but doubt BPA has leaked anything on its 2019 outage plans, doubt it has any. BUY! 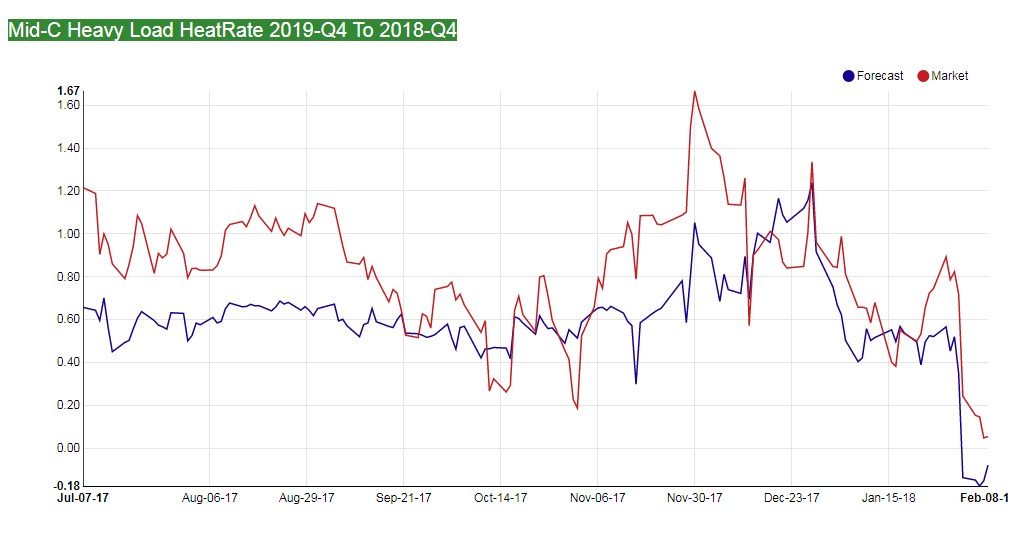 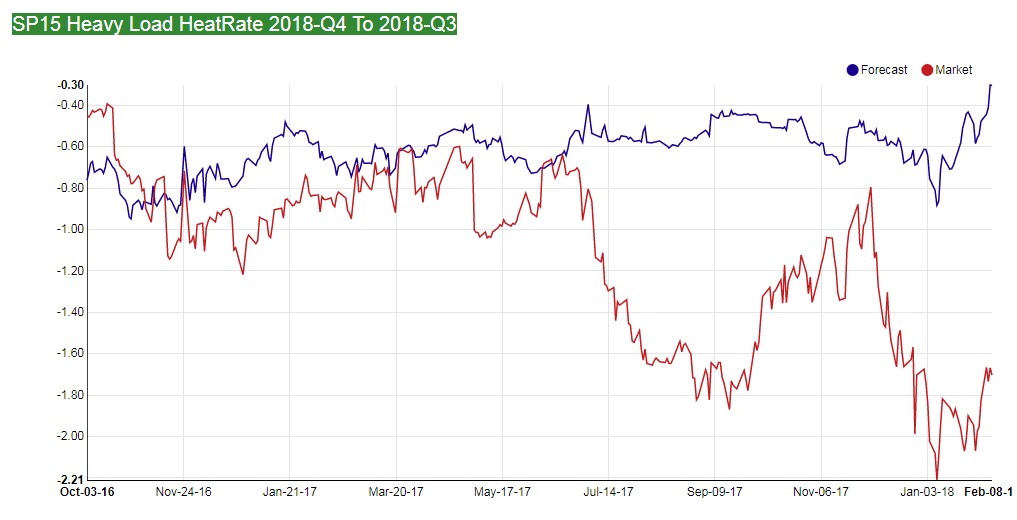 This was one of our “stars” a few weeks back and now its moved up nicely off the bottoms. At this level, we’d take profits given the very dry Cal water year.

During the snow build, and runoff, months we post on the MidC HL months twice a week. Here are those strips: 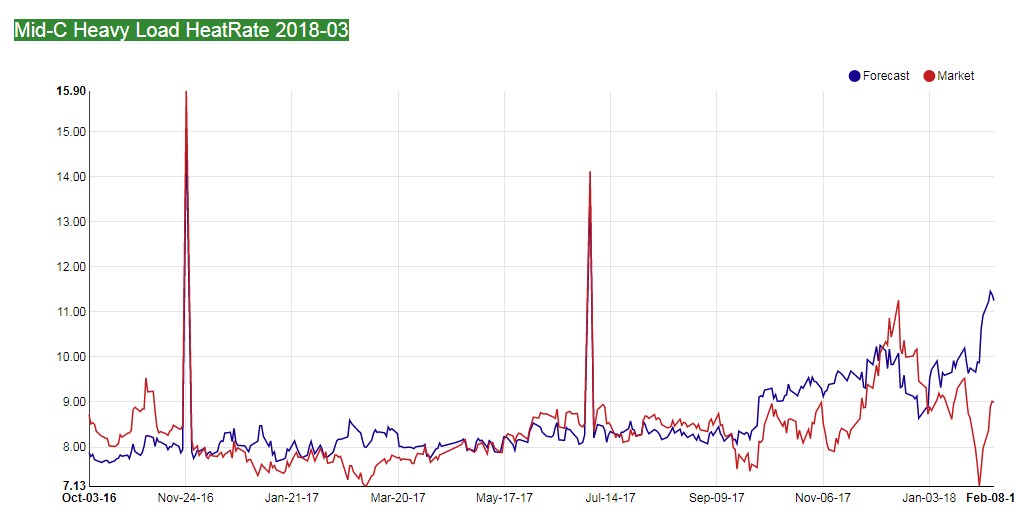 March responded sharply to the bottom and is, at best, fair value. Given the new drafts, it might be pricey. Given the cooling trend in the Northwest, it might not be pricey. 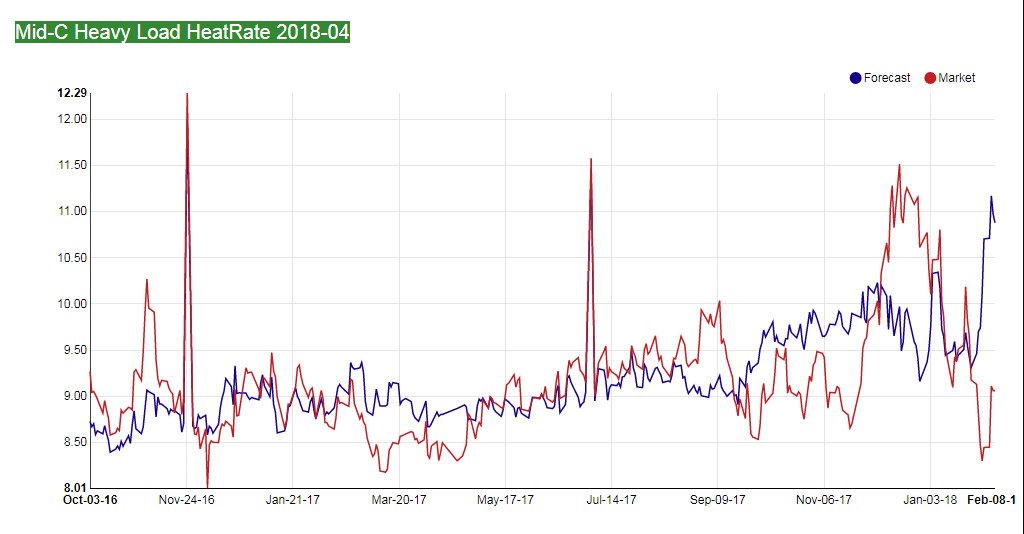 Ignoring the forecast (something odd is happening, we’ll address later), we see a similar price move in April. A bottom, then a bounce, yet it remains cheap, but isn’t under-priced. The one thing we know with absolute certainty, today, is April will see a 2 MAF drawdown at Coulee. If its bitter cold, the pond will still be drafted 2 MAF. If its warm, those 2 MAF will be drafted plus the melt. Either way, April is in the water year’s bullseye, and we’d short it again. 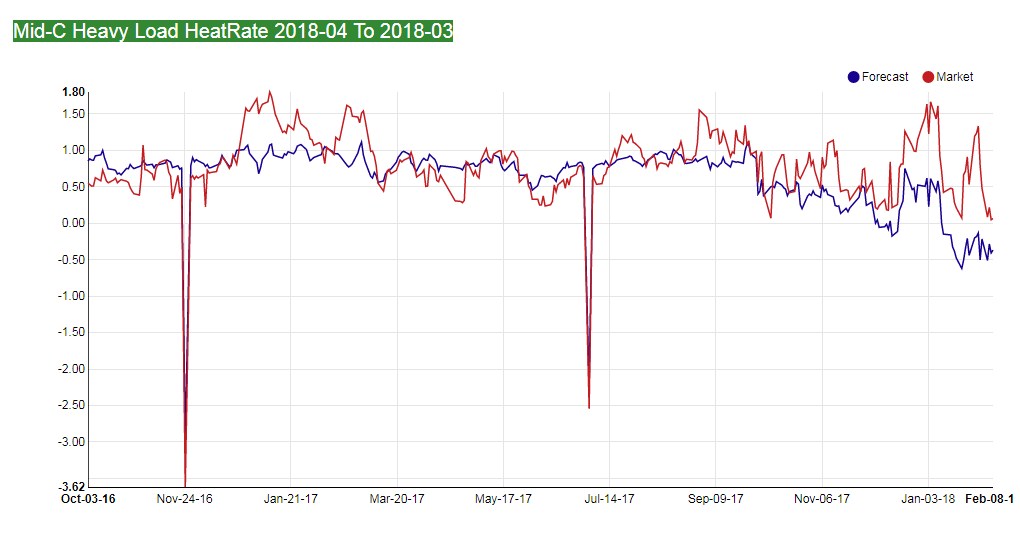 This was a very compelling trade at $1.67; now it is mostly at value. That said, we’d be more inclined to stay short this given all today’s fundies, but really don’t love the position. The juice was squeezed, not sure how much is left. 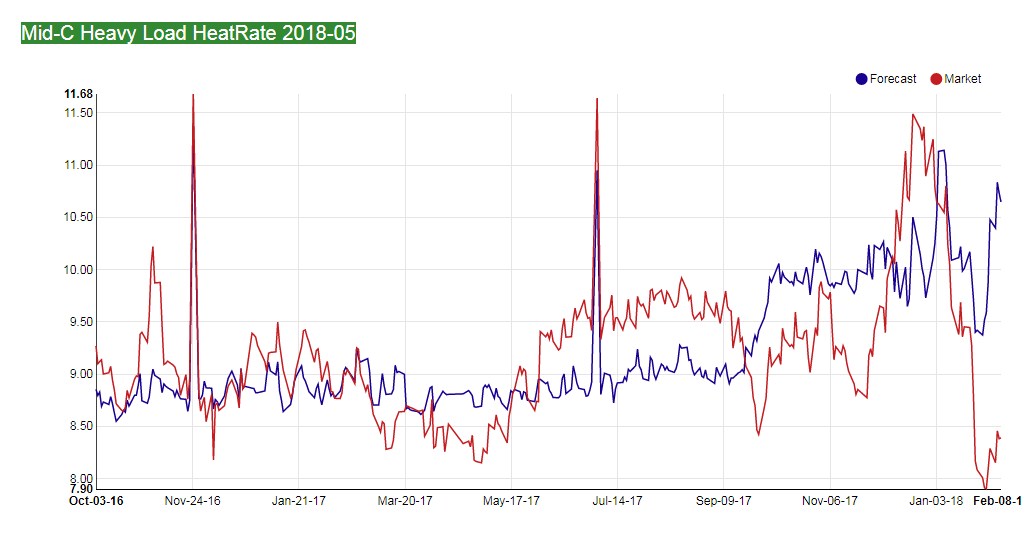 Things get more interesting in May. We have a 15′ deeper draft which won’t impact May, refill-wise, as it already would be filling the entire month. However, the entire month will realize less energy form the same flows because of lower H/K factors. Toss in extended dry, and we’d be big buyers of May today. 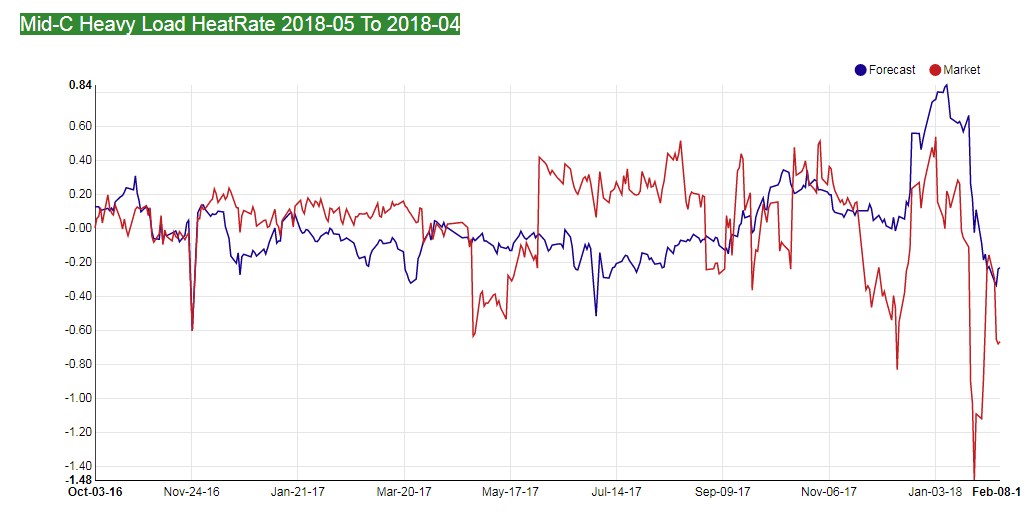 Which can only mean we’d own the May-April, which we put on at those contract lows, but despite the sharp rally, we’d stay long. 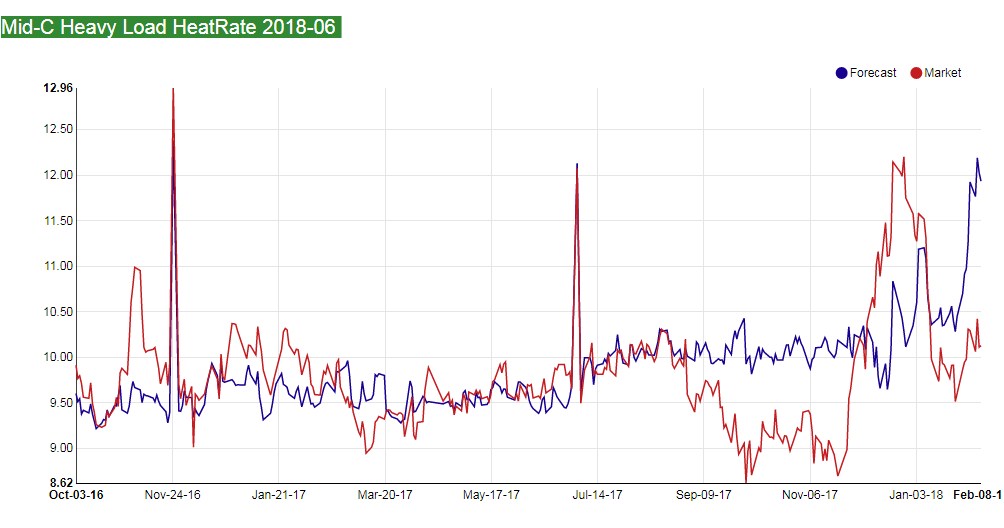 June, if anything, just found itself more bullish because of the new draft numbers. Where there was but 40 feet to refill last week, now there is nearly 60′. 100% of that change occurs in June and renders the bullet more bullish. Is it cheap? Not really, look at prices from before the water year started, its parity today, with one difference. Then the expected water year was 100%, today it is 110%. At these levels, we’d pass. 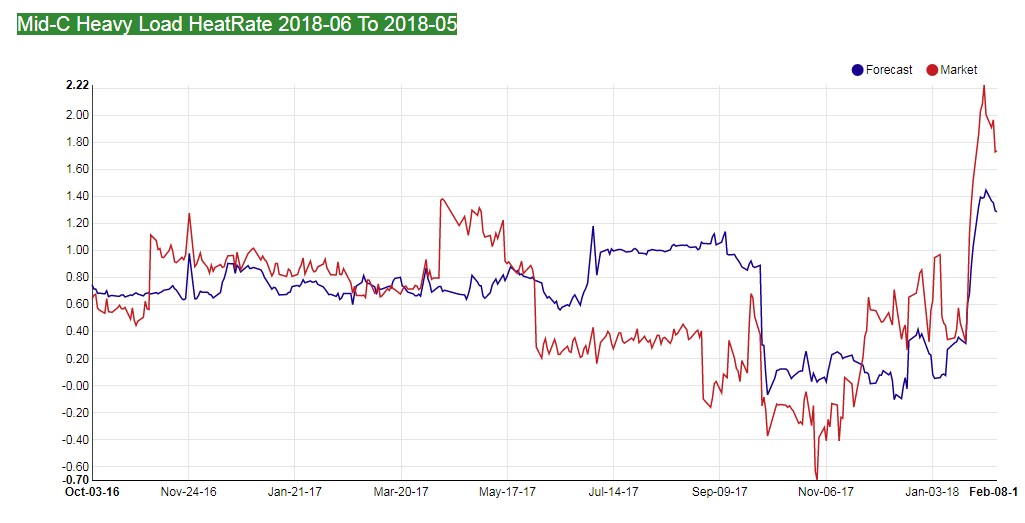 June to May is not reasonably priced; this is way too rich, and we’d short it for all the reasons said above.