Our morning takeaway is the WECC is long on supply and short on demand and don’t see anything on the near horizon to change that view. The Northwest is a Demand graveyard, the south has some heat, but that’s killing the gas markets. And those gas markets, those are merely atrociously bearish:

Even the mighty Socal Citygate has now collapsed, trading well underneath its northern cousin, PG&E Citygate, for the first time in about four months, ever since TWP @ Needles went AWOL. That line still has the most significant segment derated, and it was in the mid-80s in LA, yet the spot market cratered.

The pain is not limited to cash:

Note the collapse over the last few weeks at every western hub, even Nymex has been destroyed. We get the Northwest crash, but the California hubs seem overdone, at least from a year-on-year net energy perspective. The Golden State’s water year is not so golden; in fact, it might be one of the worst on record.

The LMP markets, over the weekend, were awful:

Check out those NOB prices … 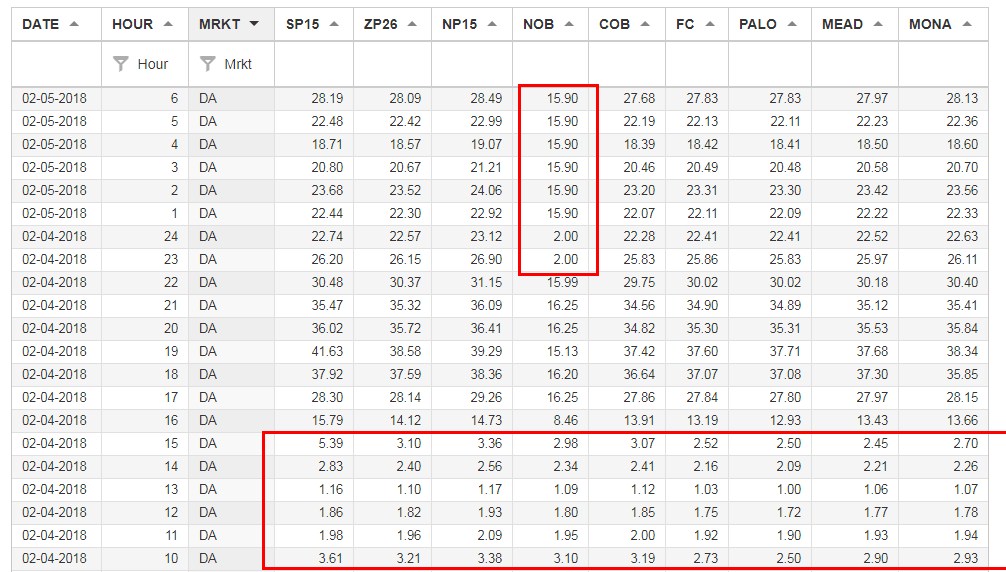 And the prices in the Solar Ramp were next to non-existent. No genco can make money at those levels, and the HE18-20 strip isn’t high enough to offset the rest of the pain, though the cheap gas helps. All of which suggests today’s term markets are do for a spanking, especially in SP.  More on that later. 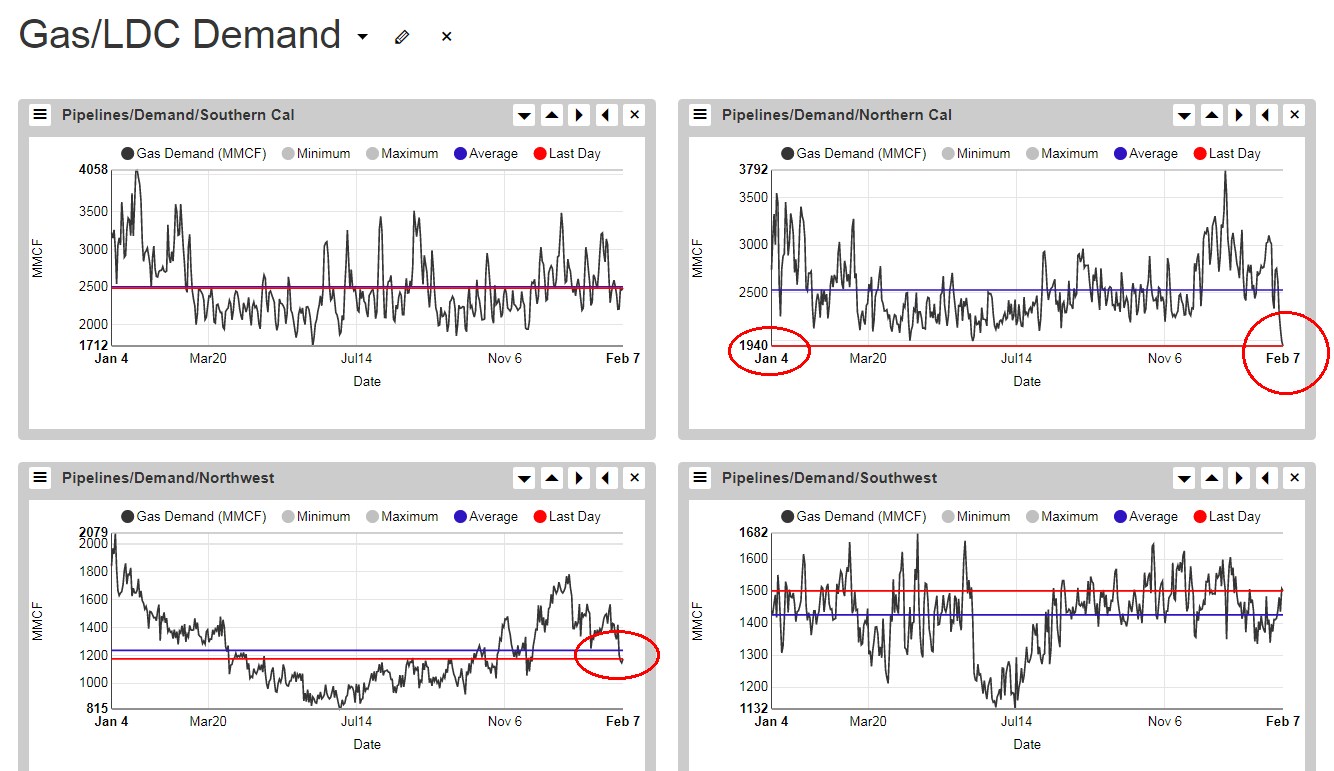 Much of the malaise in cash is explained by a collapse in demand; check out the NP15 LDC index, a “contract” low. On top of that, the Northwest’s first freshet of the season is kicking in. You’d have to go back to April-May of last year to find similar demand in the Northwest. 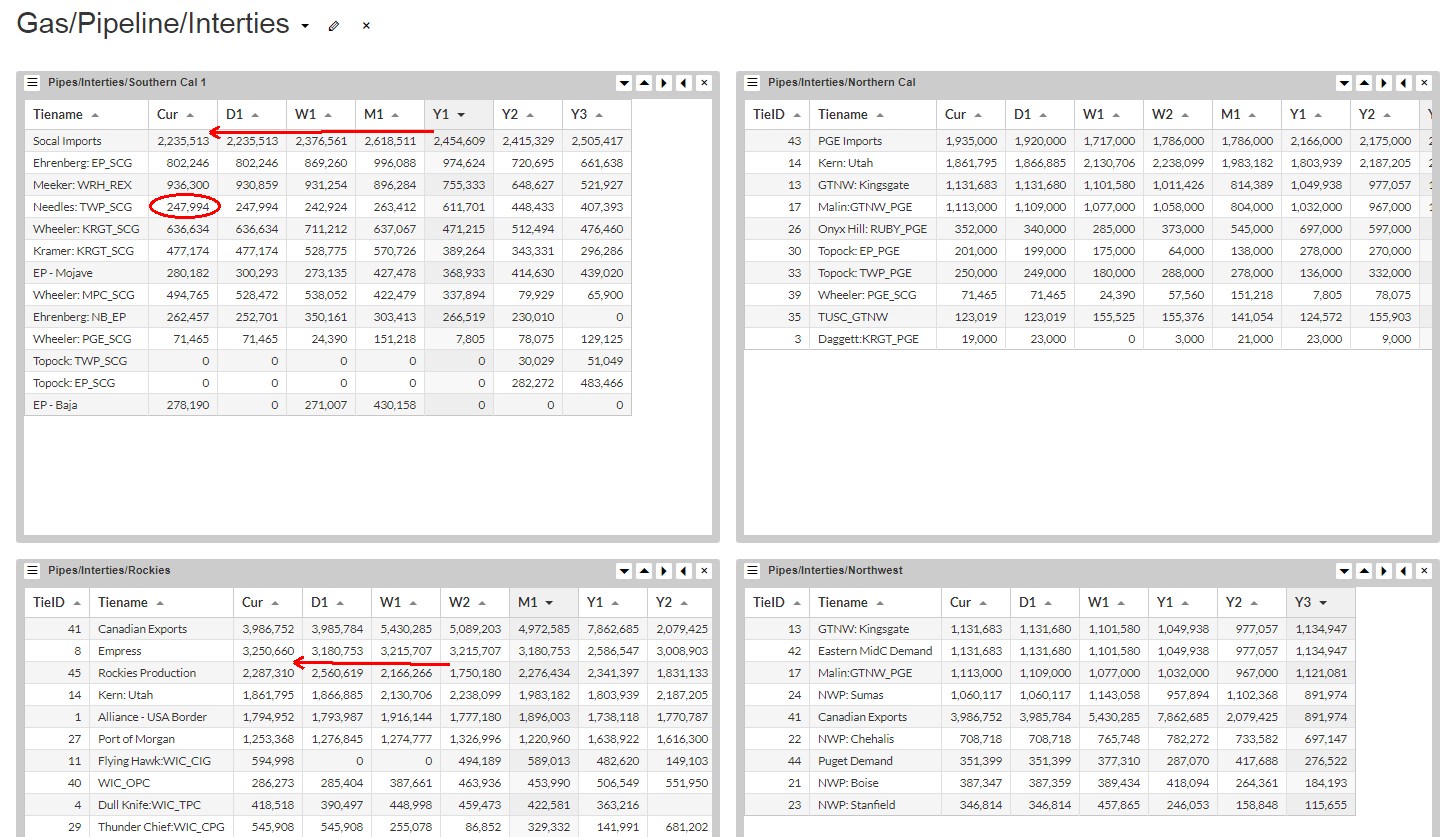 No demand and supply isn’t backing down meaning the pipes are full.

And storage is healthy; Socal is 14.5 bcf over last year, and remember what a nightmare Feb-March was then? 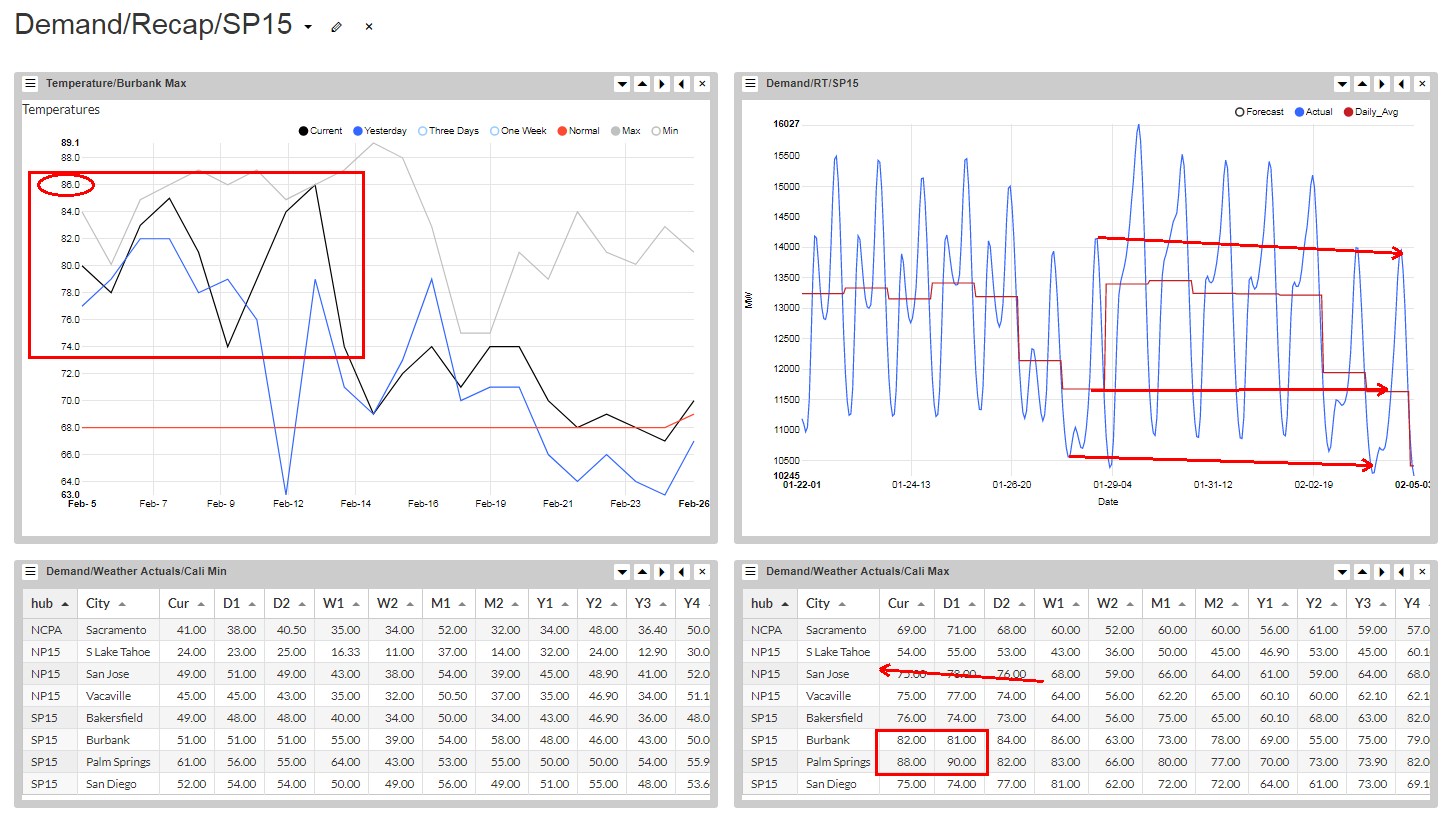 We let ourselves get over-excited after seeing mid-80s in LA, but those warm days did nothing to power demand. For the next week, the basin will remain comfortable, not hot, not cold — demand hell.

NP is worse, check out the forecasted deltas to normal, like 20 degrees, and loads are off. 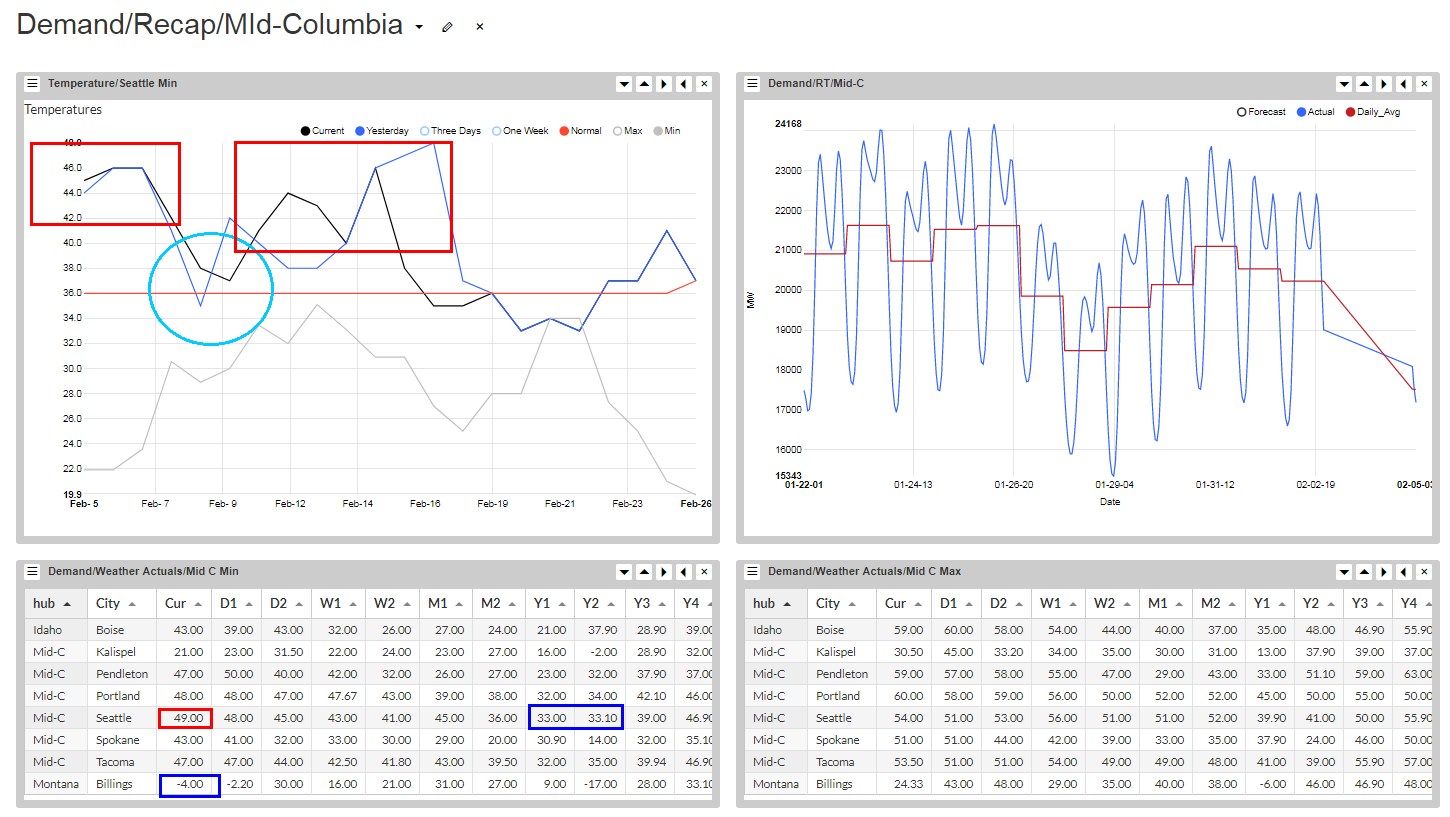 EIA has some problems with the actual loads. Hopefully, they’ll address the issue today (hence the missing weekend data). The Northwest temperatures are also well-above average, check out Seattle’s lows versus last year. 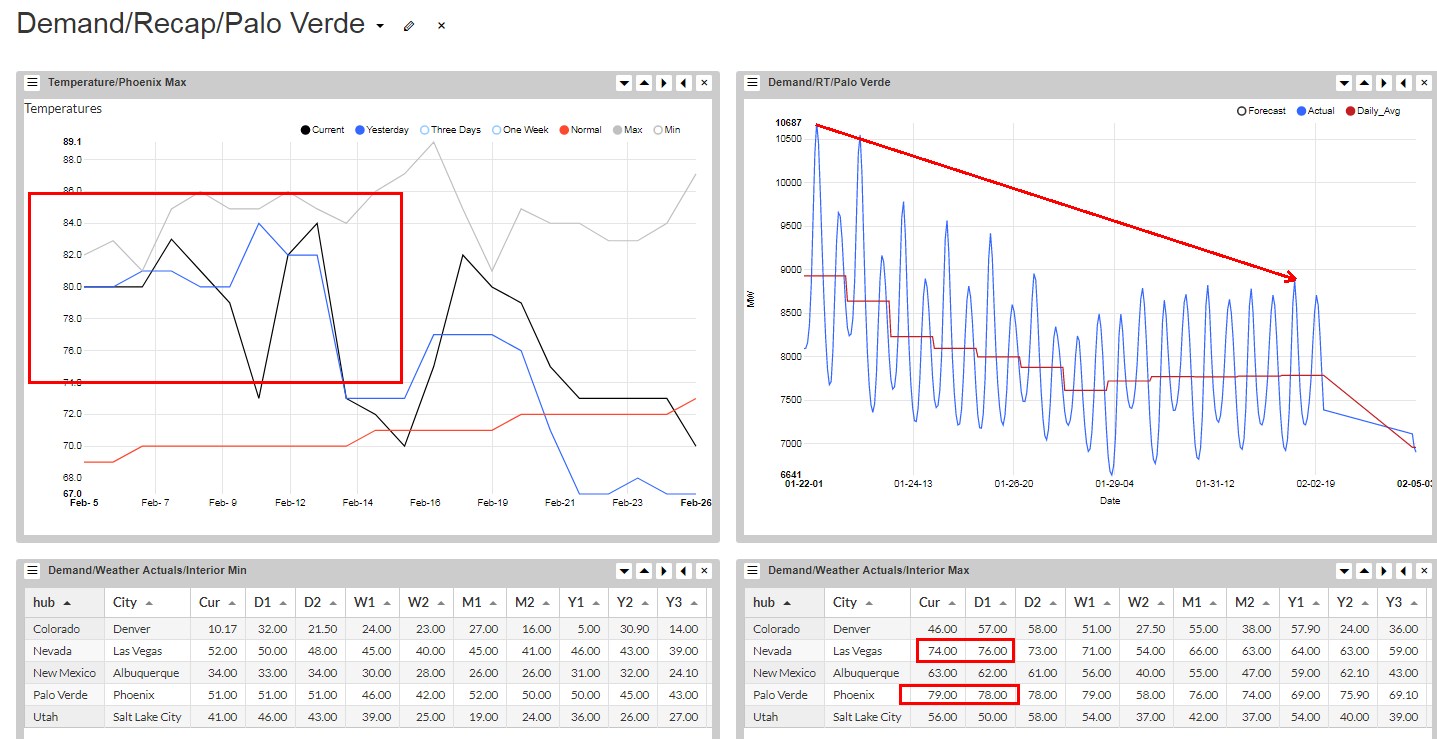 Palo warmed up and demand cratered. Until Phoenix posts some 90s, loads will stay down, and we don’t see anything but temperate 80s for the next ten days. 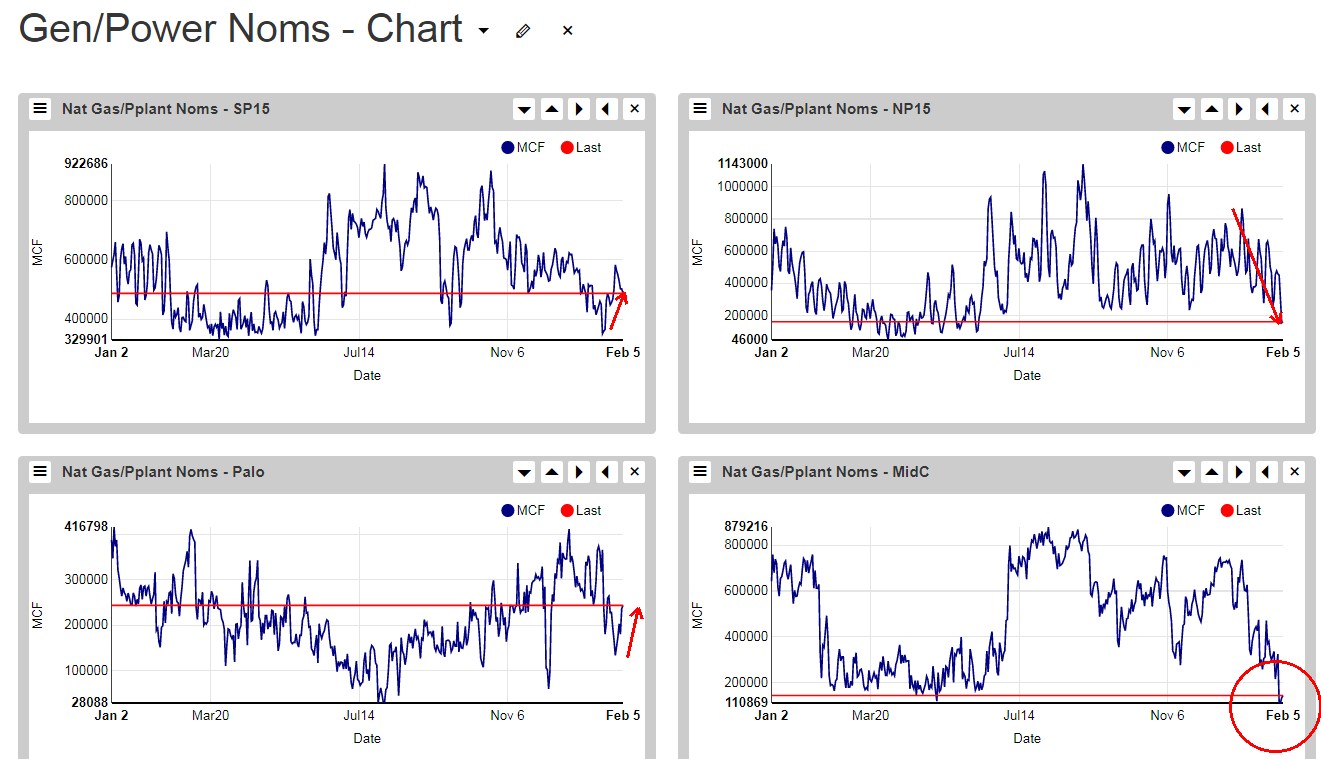 The Noms for Power Plants say it all; the Northwest hits a one year low; even lower than the Great Deluge of last year. No wonder spot sports the one handles. 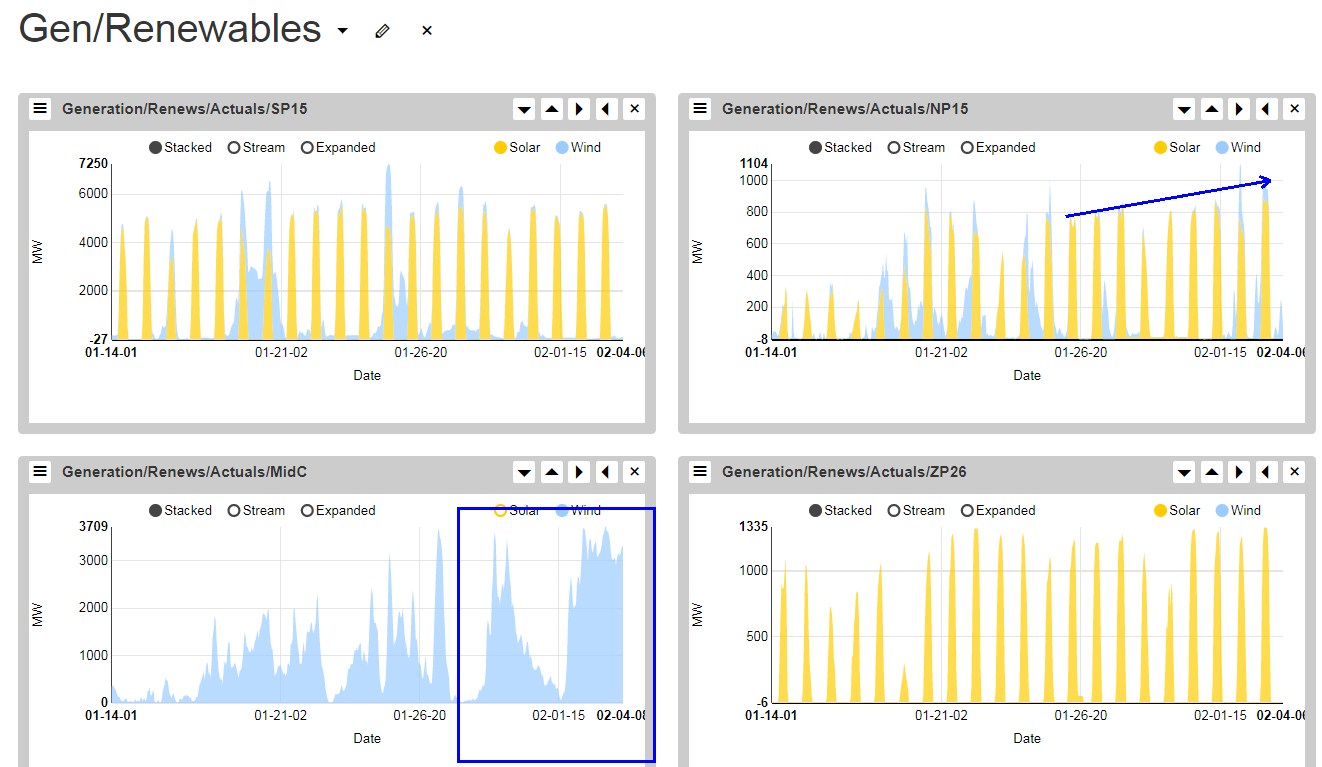 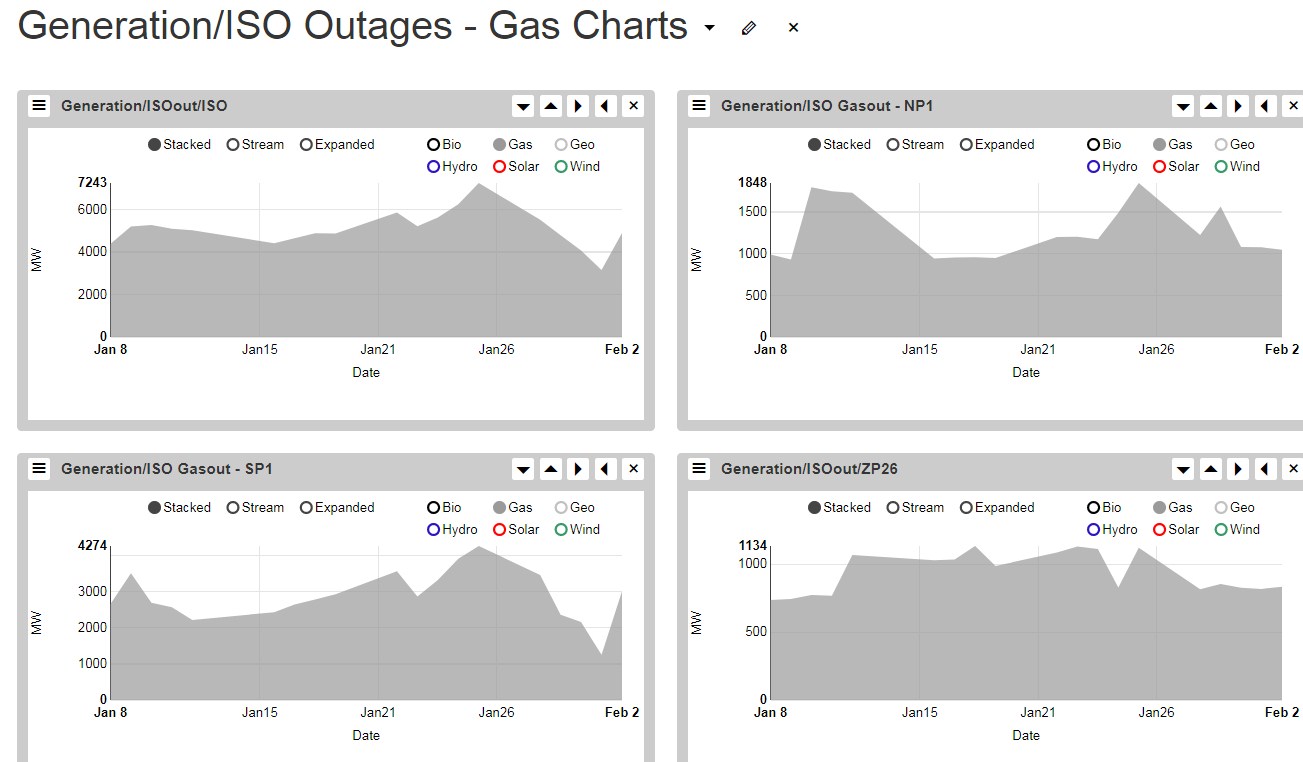 Two ISO silver linings: gas outages are up, but that’s because the ISO doesn’t need the capacity. 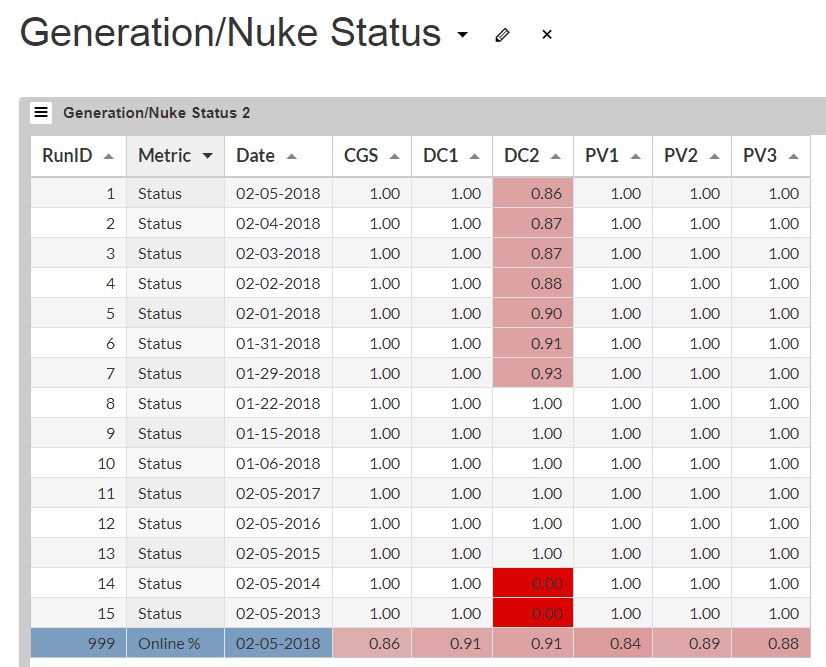 And, Diablo #2 is sputtering along in the 80th percentile. We suspect DC2 is heading towards a refuel, it last refueled in May 2016.

The few plants in Palo that EIA tracks reflect the weak situation in that hub; Gila is running at about 20%, Griffith and New Harqualah are offline for economics.

Its all about water in February and the situation is interesting, as it almost always is in this short month. California is completely dry and has no snow; the Northwest has a massive water year above Coulee, but is approaching a dry ten-day:

That is the dryest ten-day we’ve seen since November. California’s is just the same as it has been nearly every day since October:

“Yellow’s mellow” in the Golden State for the foreseeable future.

We mentioned the first Freshet, well that might be an exaggeration. However, our Sideflow indexes are taking off: 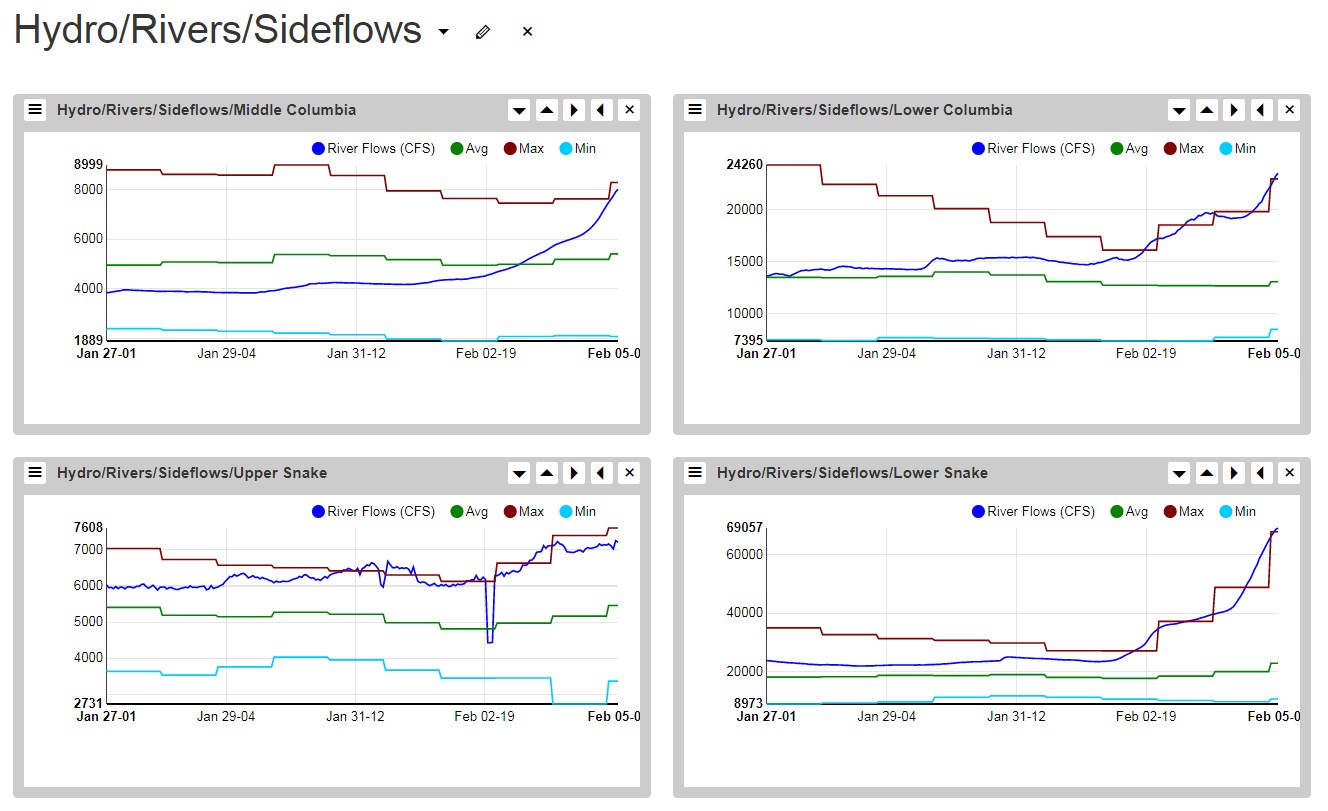 These four plots are collections of tributaries either flowing into the Snake or Columbia; in other words, they are unregulated and add to the Misery Index when they rally, which they most certainly are doing. Some of this is  caused by significant rain over the weekend, but the rest is melting snow; we’ve seen the Snow Anomalies fall at many river basins: 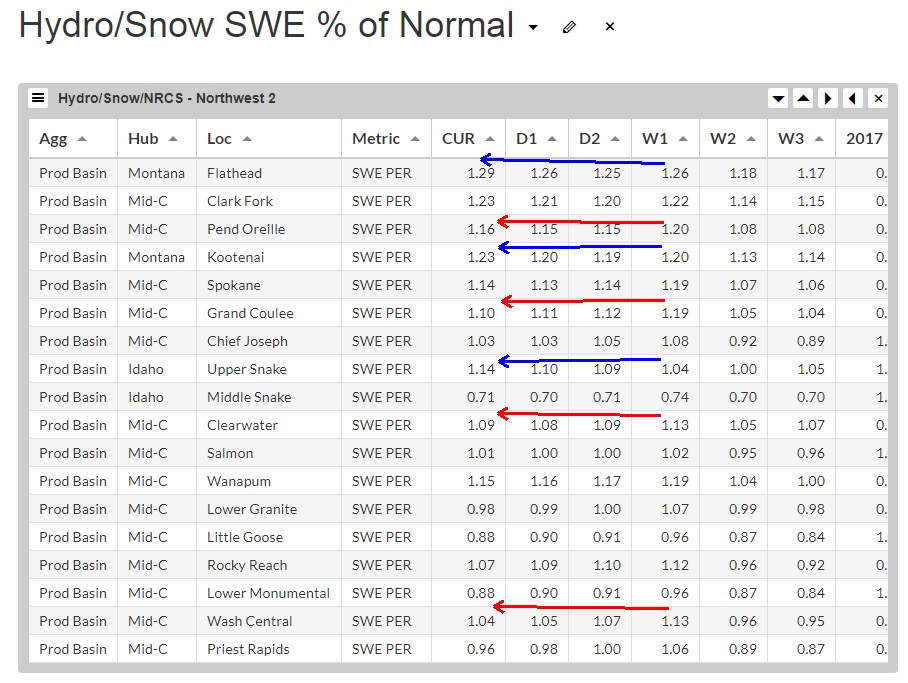 It is a mixed bag, but there are more red arrows than blue, yet the actual anomalies themselves, above Coulee, remain impressive. This week is the next installment of flood control; the feds use the Apr-Aug, how does the official forecast look? 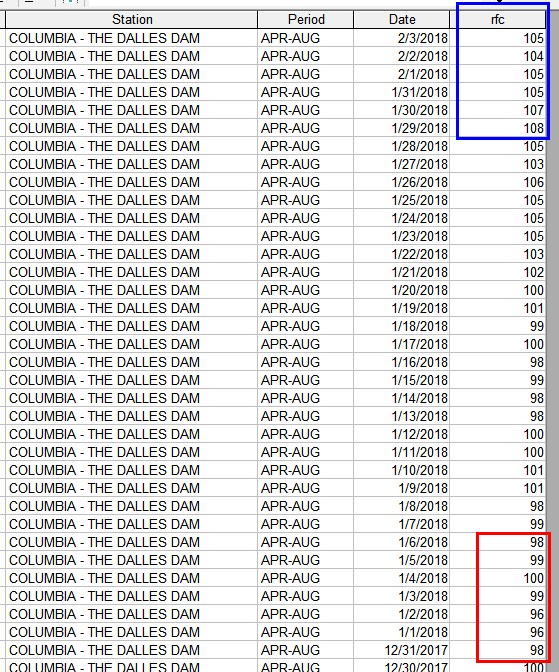 Let’s call it 104 and contrast that number with the 99’s used for Jan; clearly, the Corps must require a deeper draft than last month’s 1245, perhaps to the low 1230s? BPA doesn’t like the drafts, they lose flexibility, but rules are rules, even for the federal govt.

Libby and Hungry Horse are already drafting, not sure what’s going on with Dworshak; it’s refilling. There is even some drafting taking place on Lake Pend’Oreille. 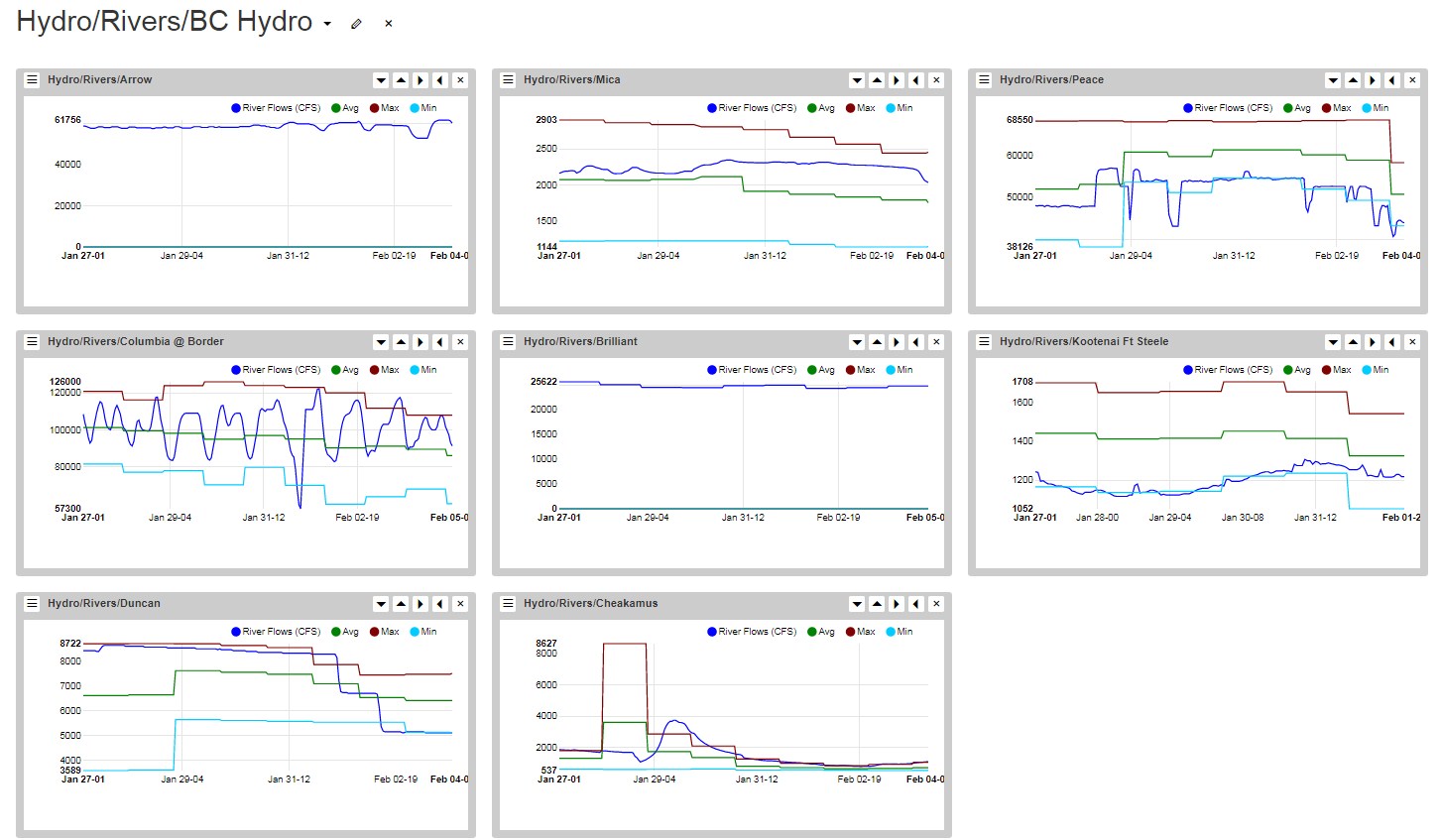 Flows on the Columbia at the US border are above the ten-year average; flows on the Peace are backed off as BC has not much load and is a net importer at MidC.

Coulee drafted but generation flows didn’t move, which seems bullish to me and suggests inflows are not that strong, yet. 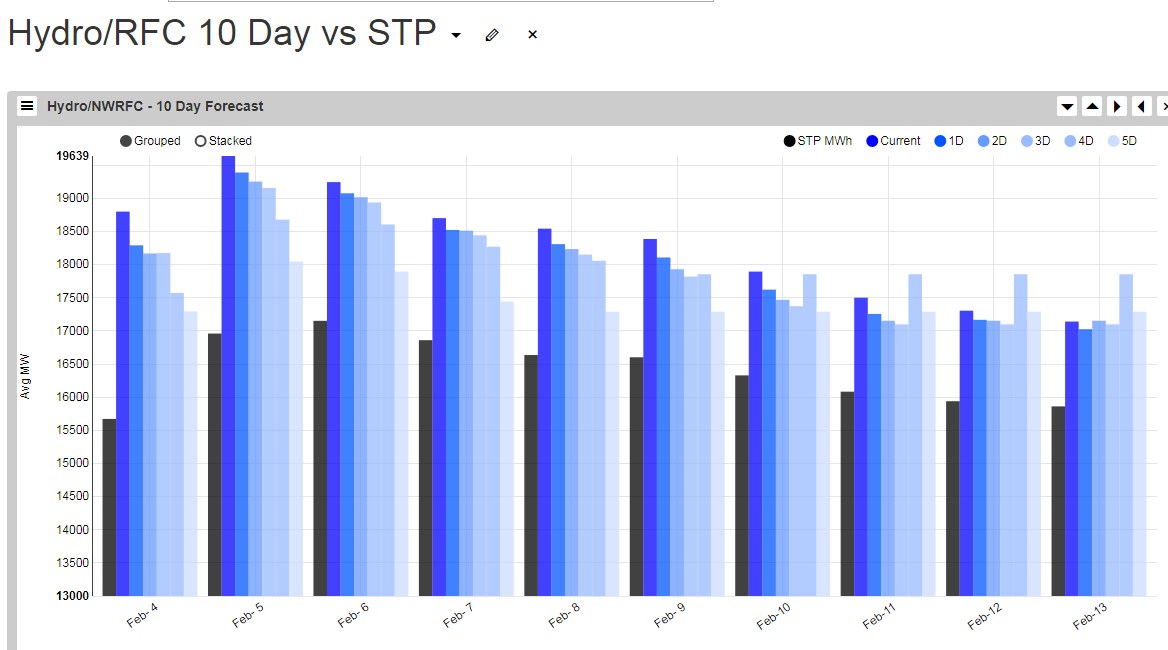 The NWRFC’s ten-day is just bearish, every day is higher than the STP, but that has been the case for the last three months. This bodes bearish for today’s STP, at least for BOM. We expect both Feb and March to realize bumps. 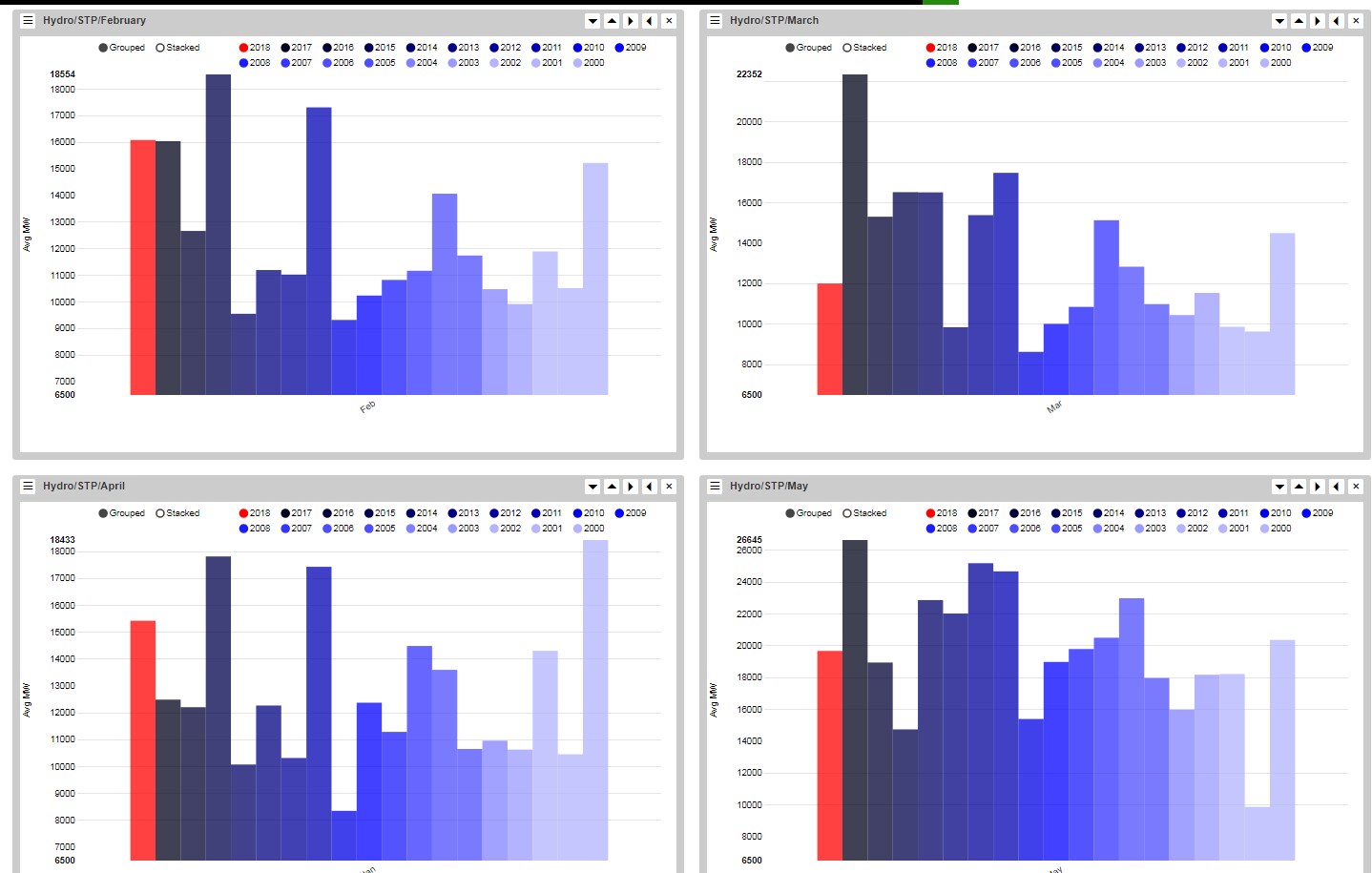 Any more adds in Feb and the strip will be at 20-year highs; March is about average but given big snow we’d expect another 1000 aMW of water to be added; trickled in, of course, over the next few weeks. April is already high, but in this water year, it will get more energy as the COE demands a deeper draft at Coulee.

Both the DC and AC have some maintenance planned for the next couple of weeks.

Not a lot, but more salt in MidC long’s many wounds.

Its ugly on all fronts, but leading that outlook is natty which has just cratered across the WECC, both cash and term. The MidC has a glimmer of respite from the relentless snows as it grows dry in the outlook, but one run of the NWS model can change that. Perhaps it is a trend, but with the water year more than 50% locked in, the chances of a dry MidC are low.