The plot thickens as Water Year 2018 takes shape as another interesting one. California is bone dry with nary a drop of rain in the near horizon — brown is now mellow; meanwhile, the Northwest is camped upon one of the most significant years on record — above Coulee, yet the Flood Control released in January suggests otherwise. Expect some fireworks next week when that critical number comes out. Some more fireworks are set to explode inside the STP, we think.

Let’s just jump to the chase and talk more about water supply.

We mentioned our internal forecasts were undergoing a rewrite – that body of work is completed. Now we are in the process of re-running all our historical forecasts to incorporate the new, and better, algorithms. But that is an aside, the topic de jour is the state of the state of the water year, and it is significant. Let’s look at the key values:

The key value there is TDA, so let’s look at some historical flood control values released in February: 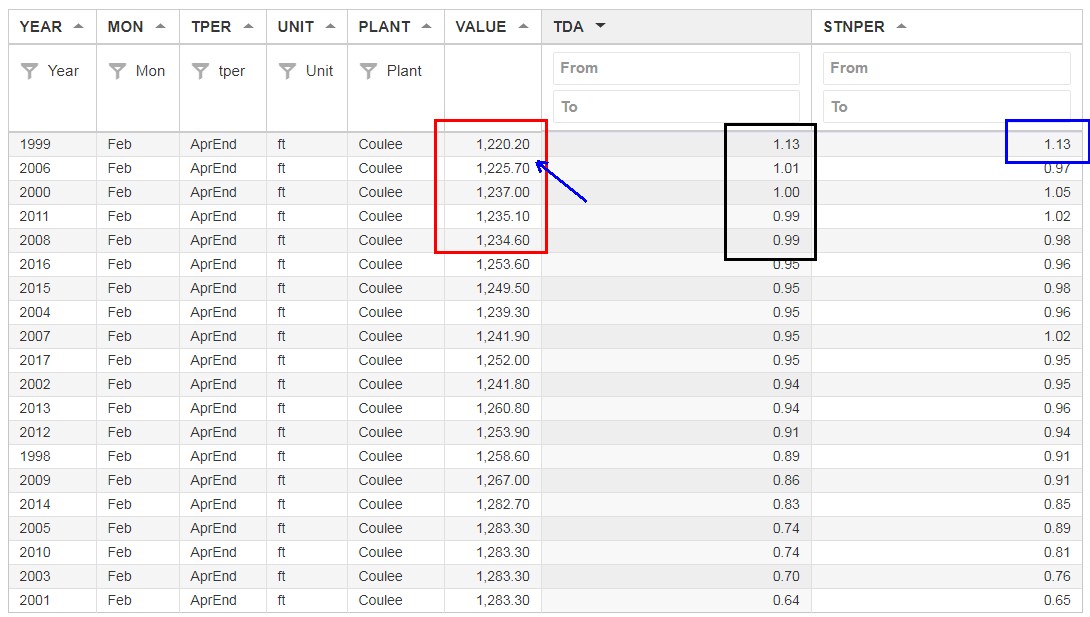 Over the last twenty years, there has not been a year quite like this one. In fact, only 1999 posted a bigger TDA forecast, it was 113 and this year is 110. Every year preceding was less, much less, but let’s use the highlighted years to guess the Coulee target reservoir elevation at the end of April.

If we take 1999, then Roosevelt is going to the 1220s! Even using 2006, which was 9% lower than this year, the pond is drafted to a twenty handle. Bear in mind; the current target is 1245′. So, bottom line, expect much deeper drafts. Also, the Jan had no draft for March, does that change in a more prominent year?

We said the plot thickens; it does when we look at this week’s STP:

This is a new report, Month by Historical Year, and we like it, so should you. A couple of observations:

So we got ahead of ourselves and spilled some hydro pre-maturely, back to the regular report.

LMPs are just sideways, and Palo continues to congest, but COB, surprisingly, and NP no longer congest much to SP

Socal Citygate remains premium to PG&E Citygate, despite the return of one of the TWP Needles segments, which is in stark contrast to historicals; the former has always traded discount to the latter. 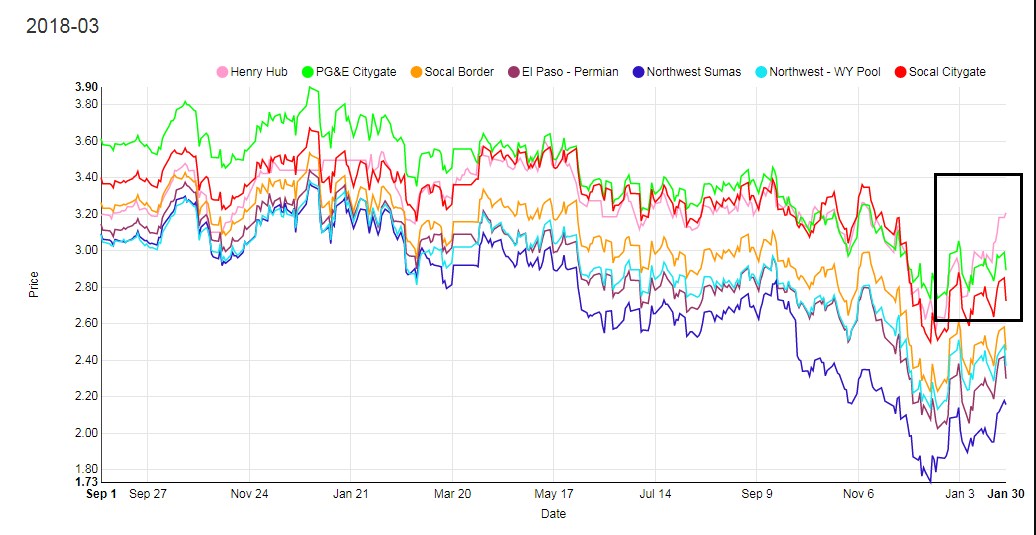 Nymex has soared but not the west hubs; most of these have cratered despite the futures market. We say most, might Sumas has staged a rally relative to its western cousins. LOL, in the face of a massive water year, we’d have thunk otherwise and we’d a been wrong. 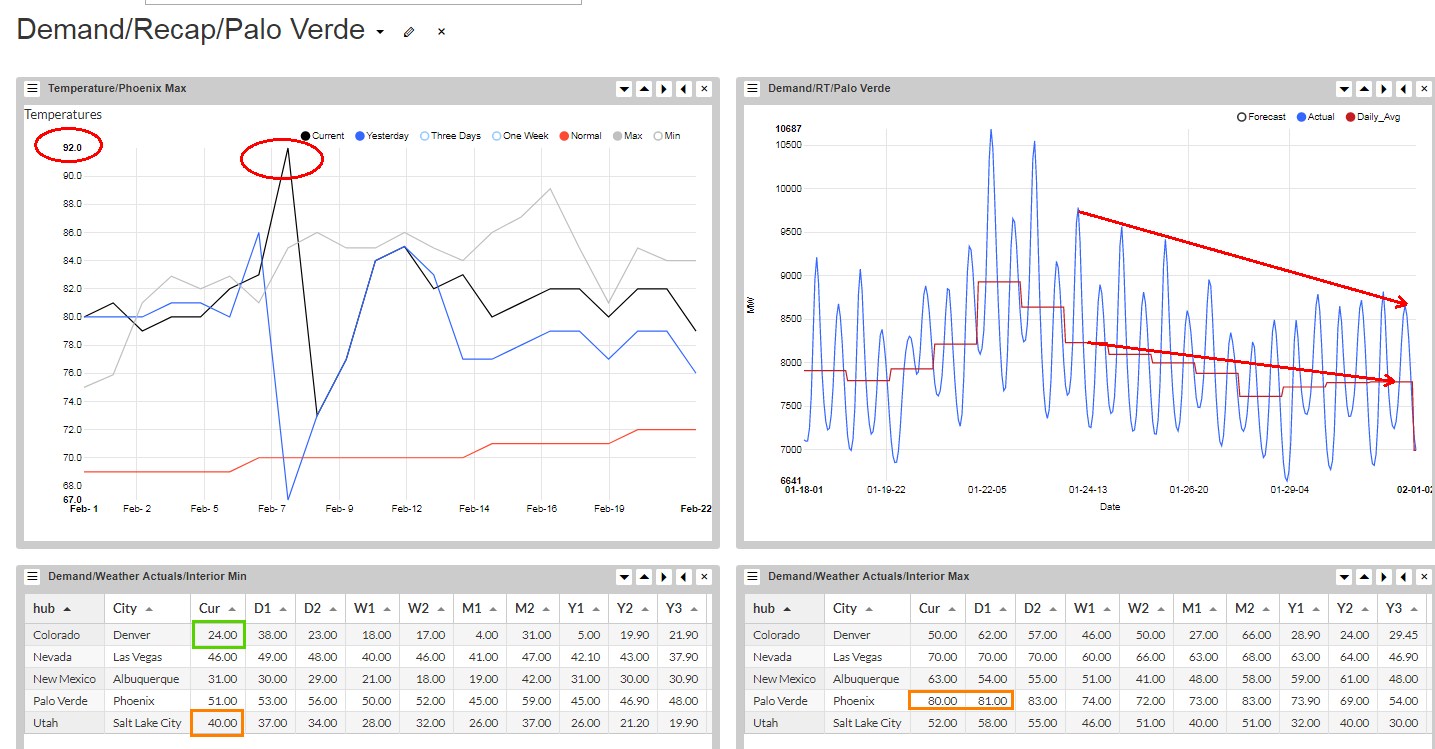 Palo is going back to being very hot, check out the new 10-year highs being set next week. All the while, actual loads in the hub are off. 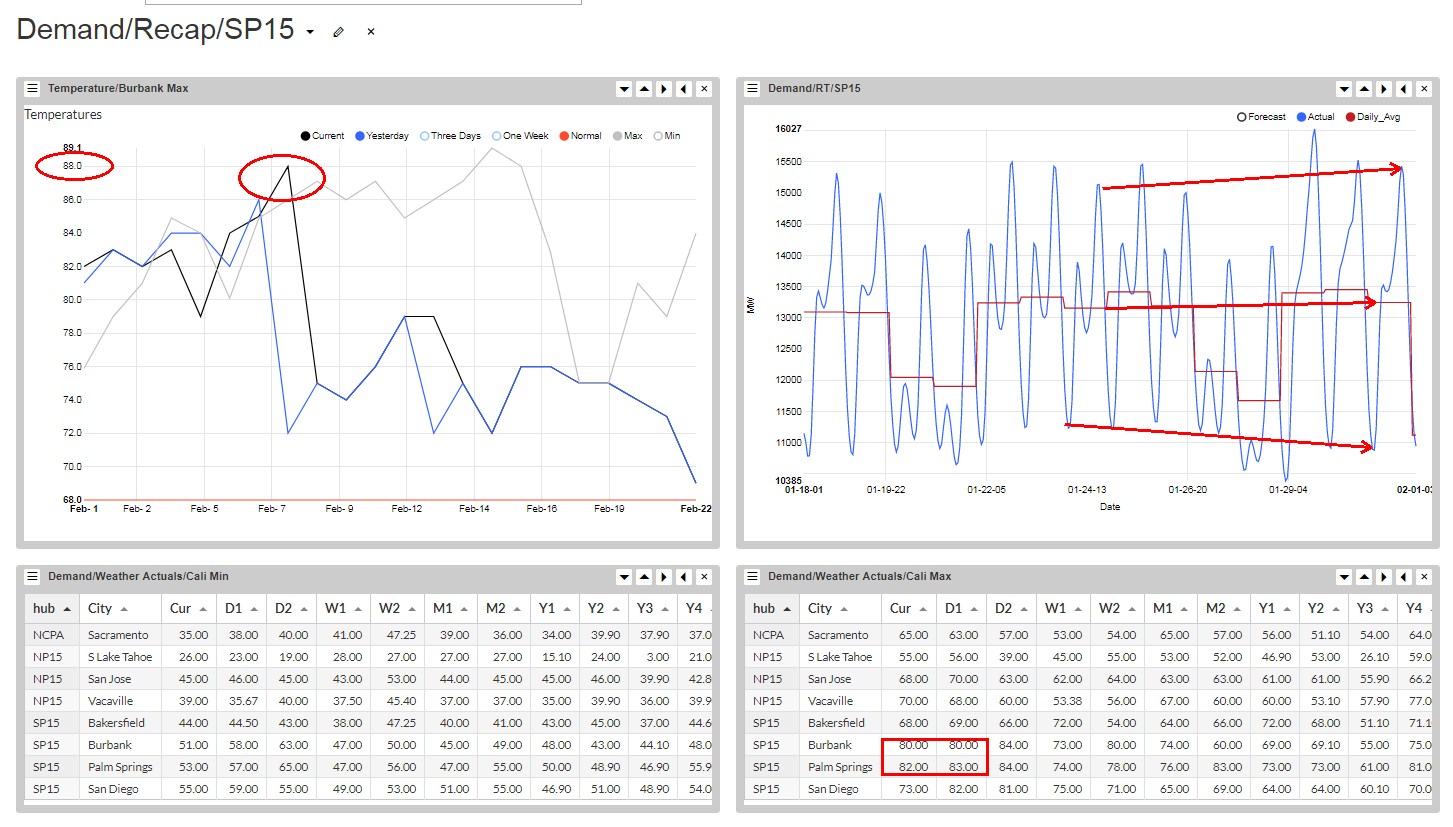 SP15 joins the party; many new 10-year highs will be set next week as LA braces itself for the low 90s — in February. The hub’s average loads are up, so are the max, but the min loads are off, week-on-week. 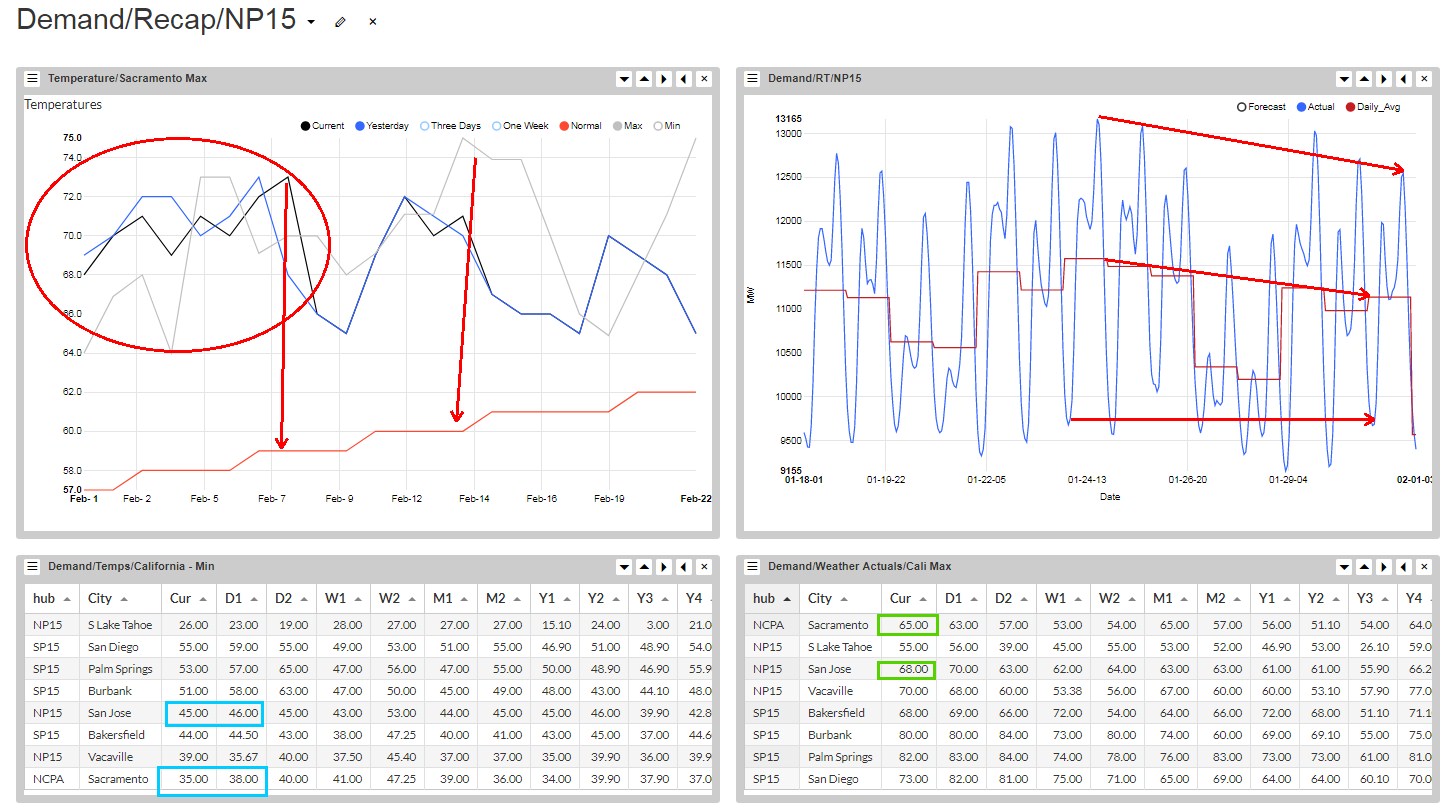 NP15 will be warm, but that will mean the hub will grow even more bearish. Loads are off, both average and peak, while min is sideways. 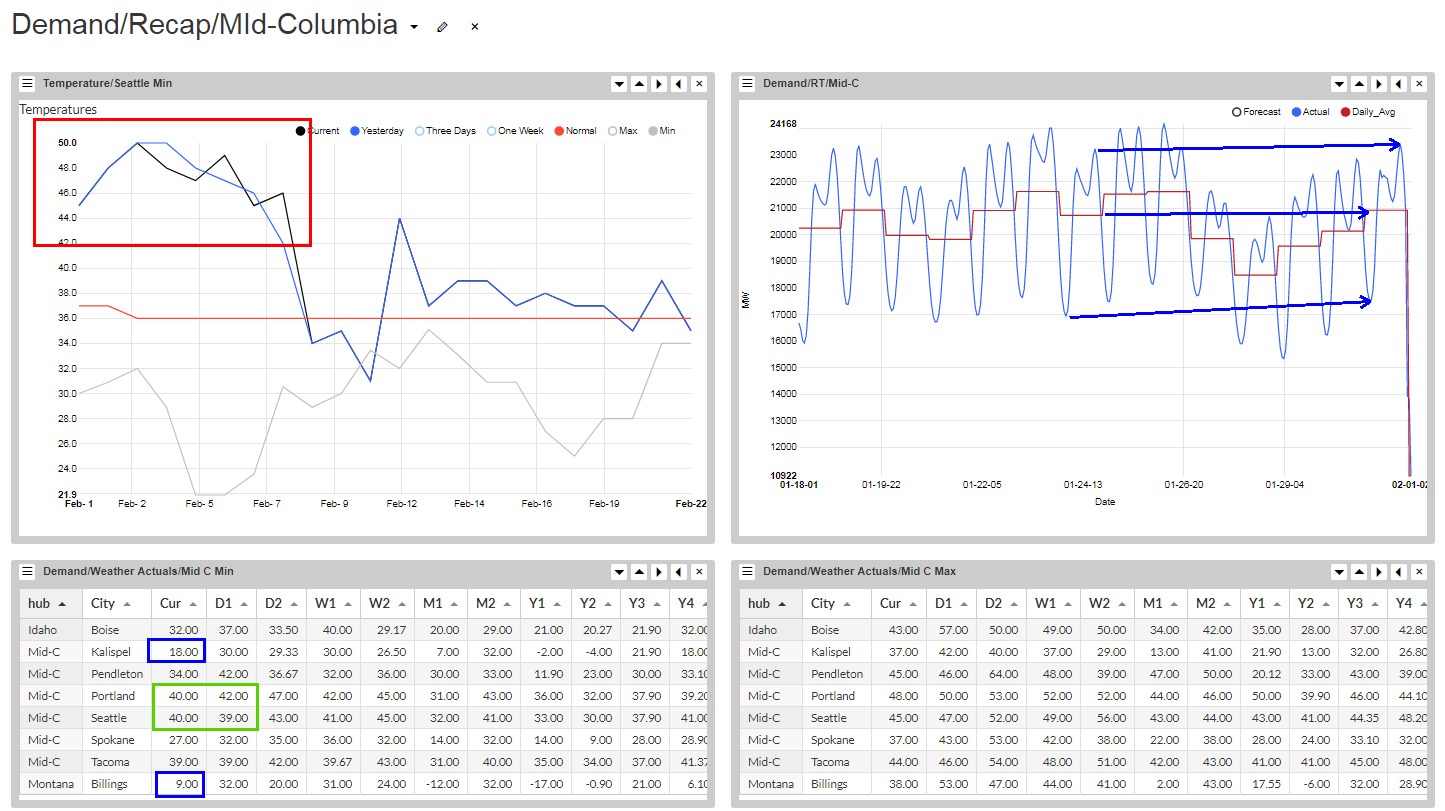 Like NP15, the Mid-C will be warm and bearish, though its loads are up slightly across all three metrics, which make sense given that it’s somewhat cooler than last week. 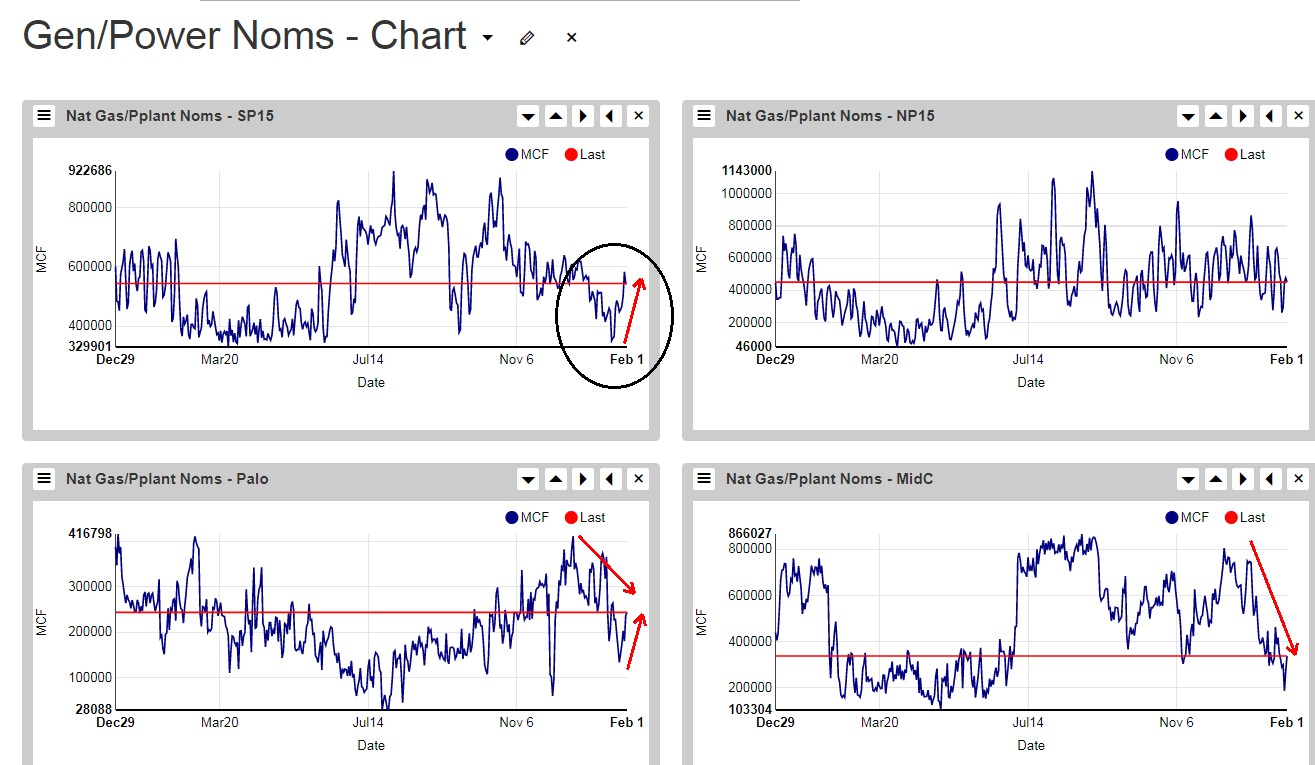 SP15 noms have rallied off of warmer weather while the MidC’s have tanked from last December and will tank further with declining load and rallying water. 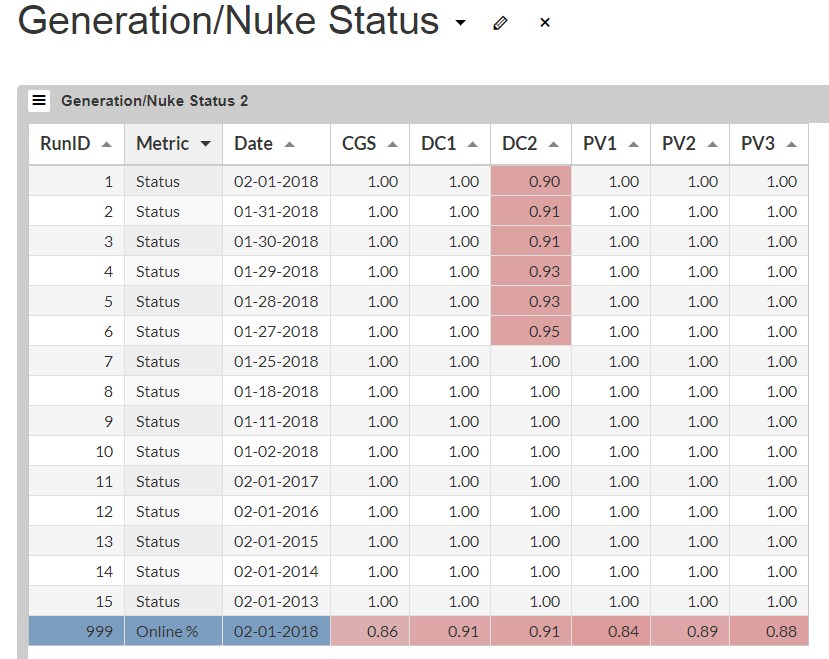 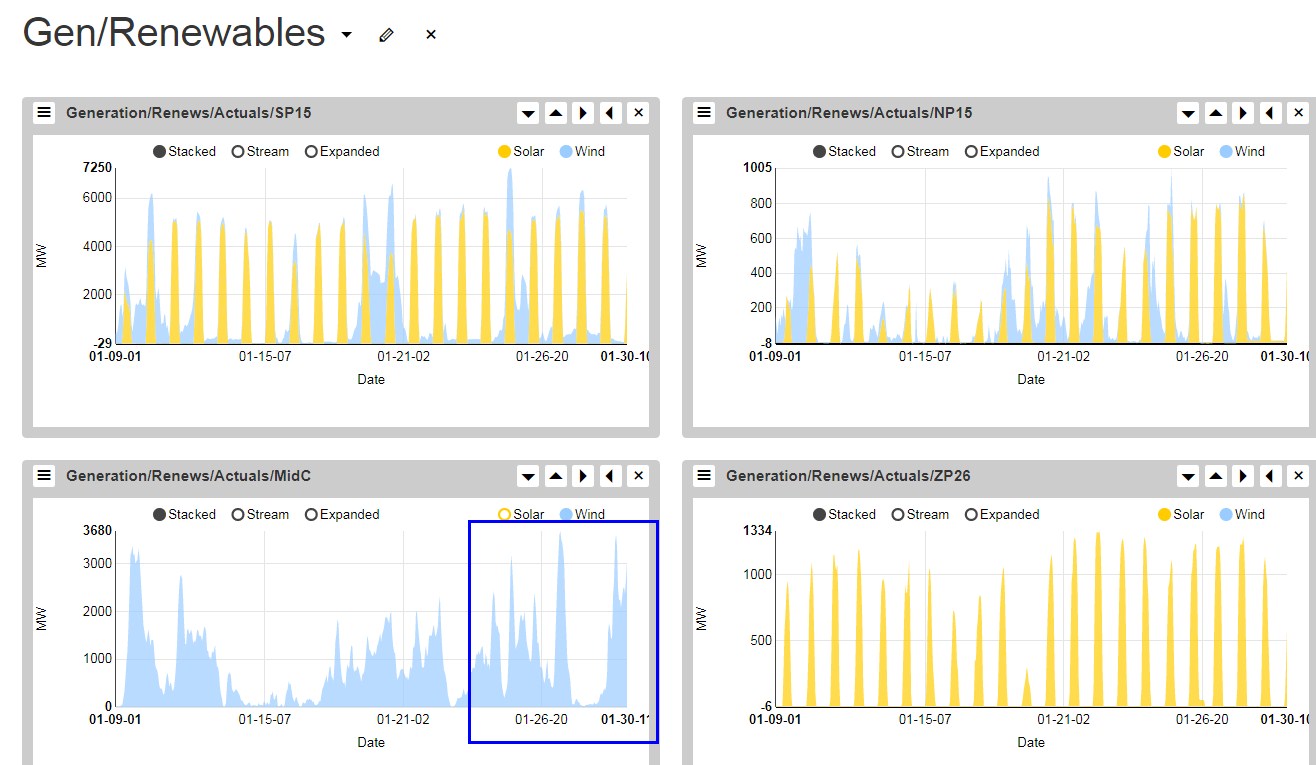 The Northwest has seen relatively strong wind energy, but not the sunny ISO, though its solar is at max capacity.

Thes two Palo plants say it all about that hub; Gila is barely idling, Griffith is shut down. That should change once Phoenix posts some 90s next week. 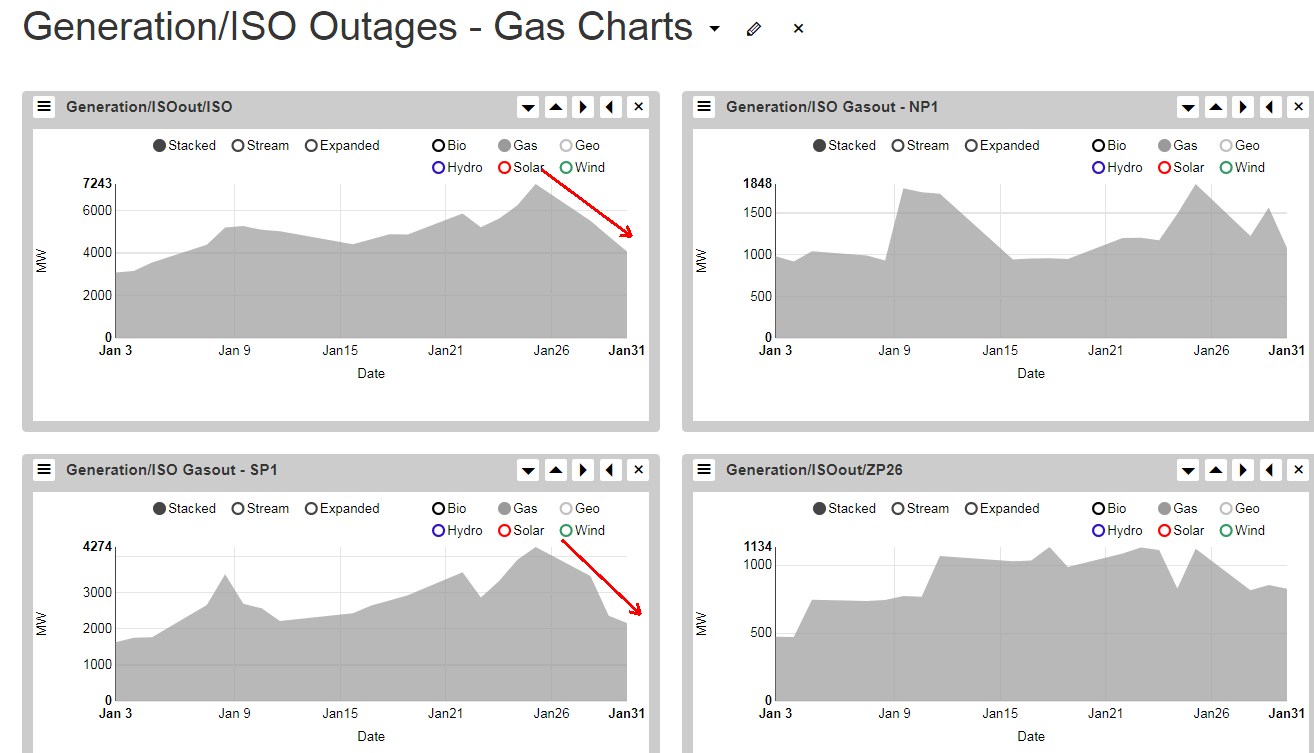 SP has seen a substantial return of its gas plants, perhaps in anticipation of those 90s next week?

We already shared some hydro at the start, but there is more … 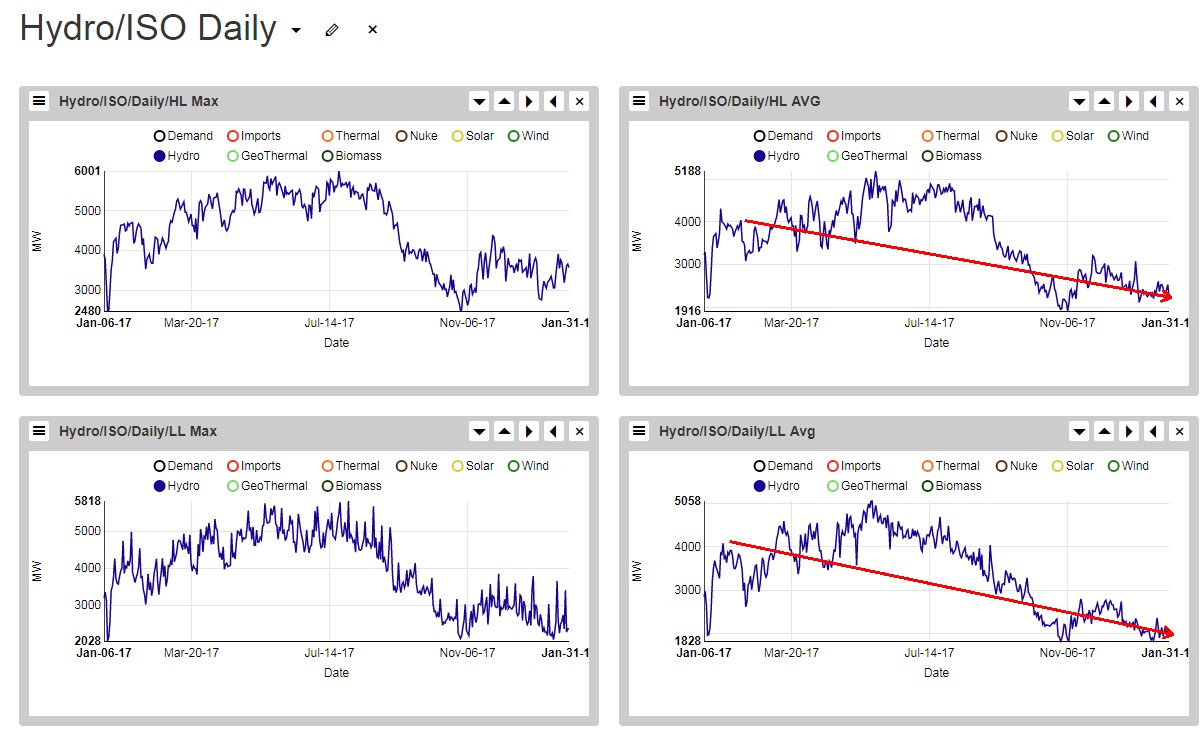 This set of plots returns actual ISO hydro energy over the last year; contrast current output with a year ago — off nearly 2000 aMW.

Hourly streamflows in the Golden State are now camped on ten-year lows — it’s official, the WY17 hangover is gone. Time for Kalistan to pop open some bubbly and celebrate another year of drought.

And nary a drop to be seen in the 20-day horizon.

Even the Northwest is drying out, of sorts. This is an odd forecast; Kalispell is set to receive almost as much precip as Portland, OR. In total, the outlook is slightly bullish, but the Upper Columbia will realize more builds over the next week, heading into the Feb Flood Control. 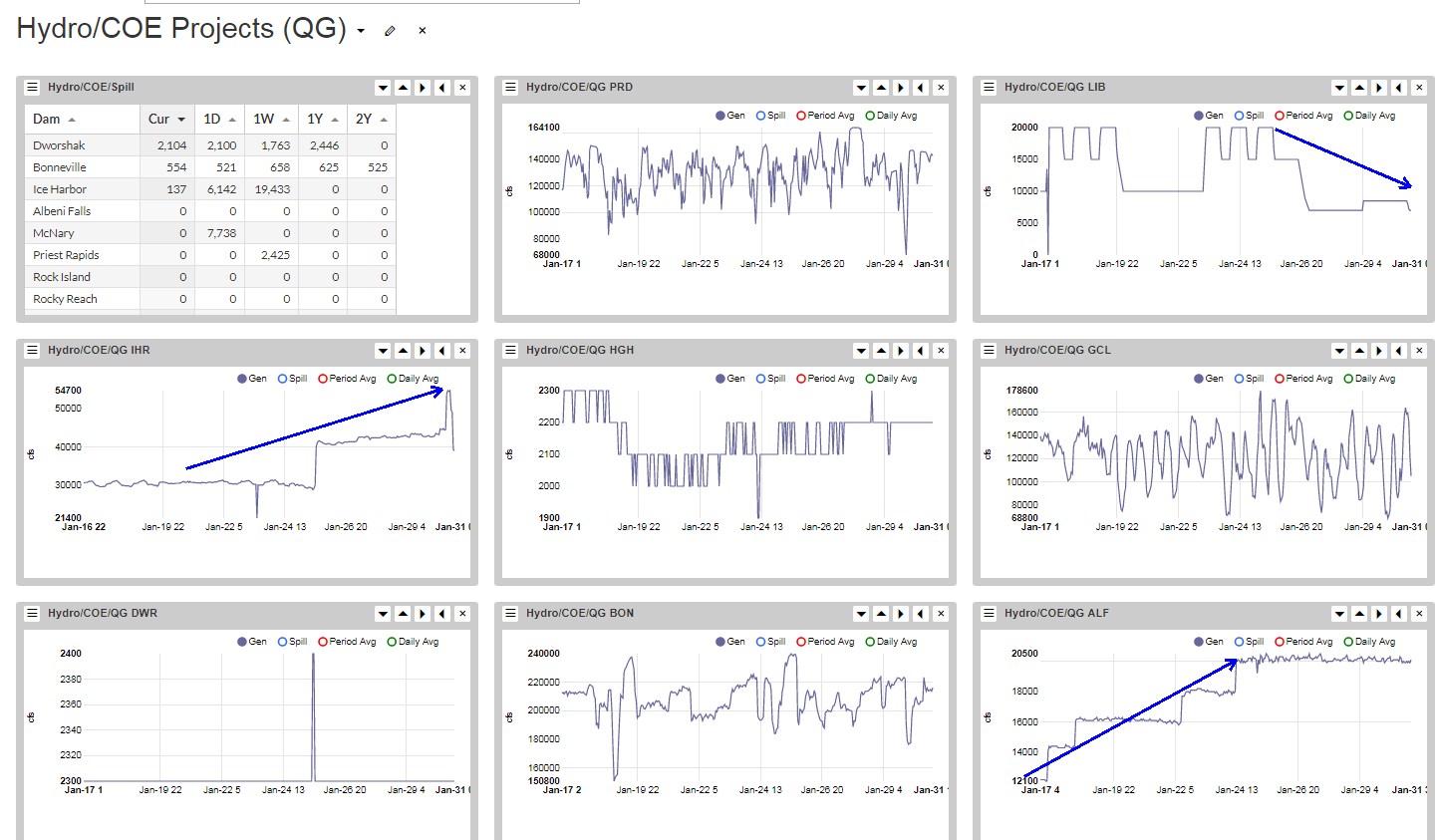 Lots of regulation-driven changes as the projects above Coulee evacuate water  per flood control. These Feb-March drafts will put constant pressure on price and, without bitter cold, we’d expect cash to clear in a low 7k heat rate for the foreseeable future.

Coulee quit drafting, but we’d expect an end of March target of around 1250, suggesting another thirty feet between now and then. Doubt much of that comes out in Feb, not given the drafts at Libby and Horse. 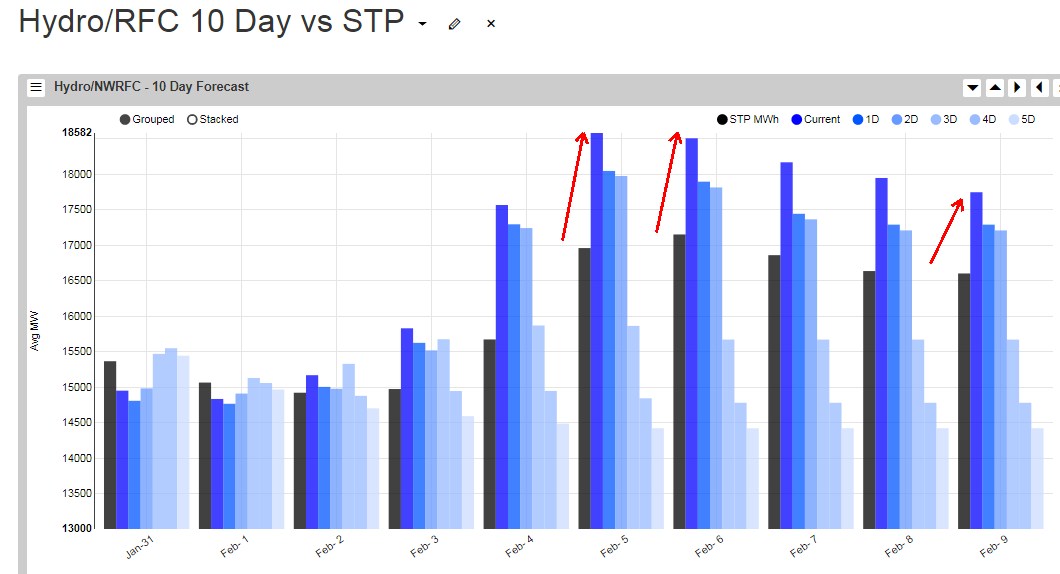 The NWRFC’s Ten Day, true to form, is now higher than Monday’s STP for the same days. This must be regulation-driven given the dryish precip forecast. 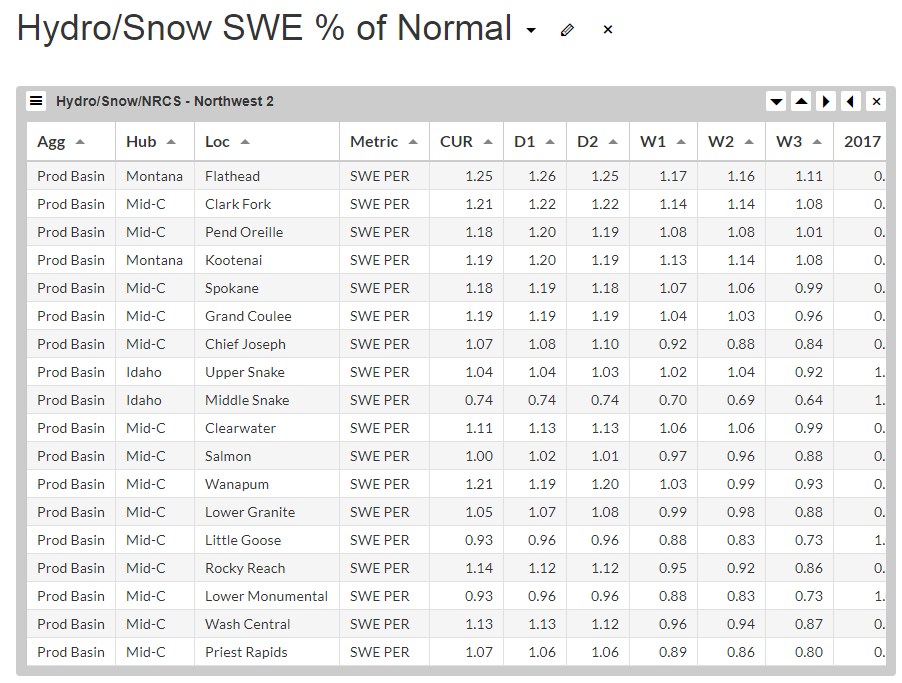 We’ll close out the hydro with SWE, check out those massive anomalies above Coulee.

Both the DC and the AC have some maintenance taking place next week.

The AC will be derated about 600 MW for a week due to work on the ISO side of the line.

Transmission flows are as to be expected, and you get a feel for how long the MidC is by checking out the AC.  Several hours the line flows exceeded TTC.

Bullish to very bullish in the south; bearish in the North. Regulation changes may turn the North into an extremely bearish hub if we see marginally higher draft targets next week. Our thoughts on the market to follow in a subsequent post.