Our takeaway, from this morning’s fundy crawl, is, the entire WECC grows ever warmer, so warm records will be set and air conditioners fired up in the south. So warm its passed the Rubicon of demand and is now bullish, in the south.

Phoenix in the high 80s, which will set a new ten-year high. Yet demand is off, week-on-week. 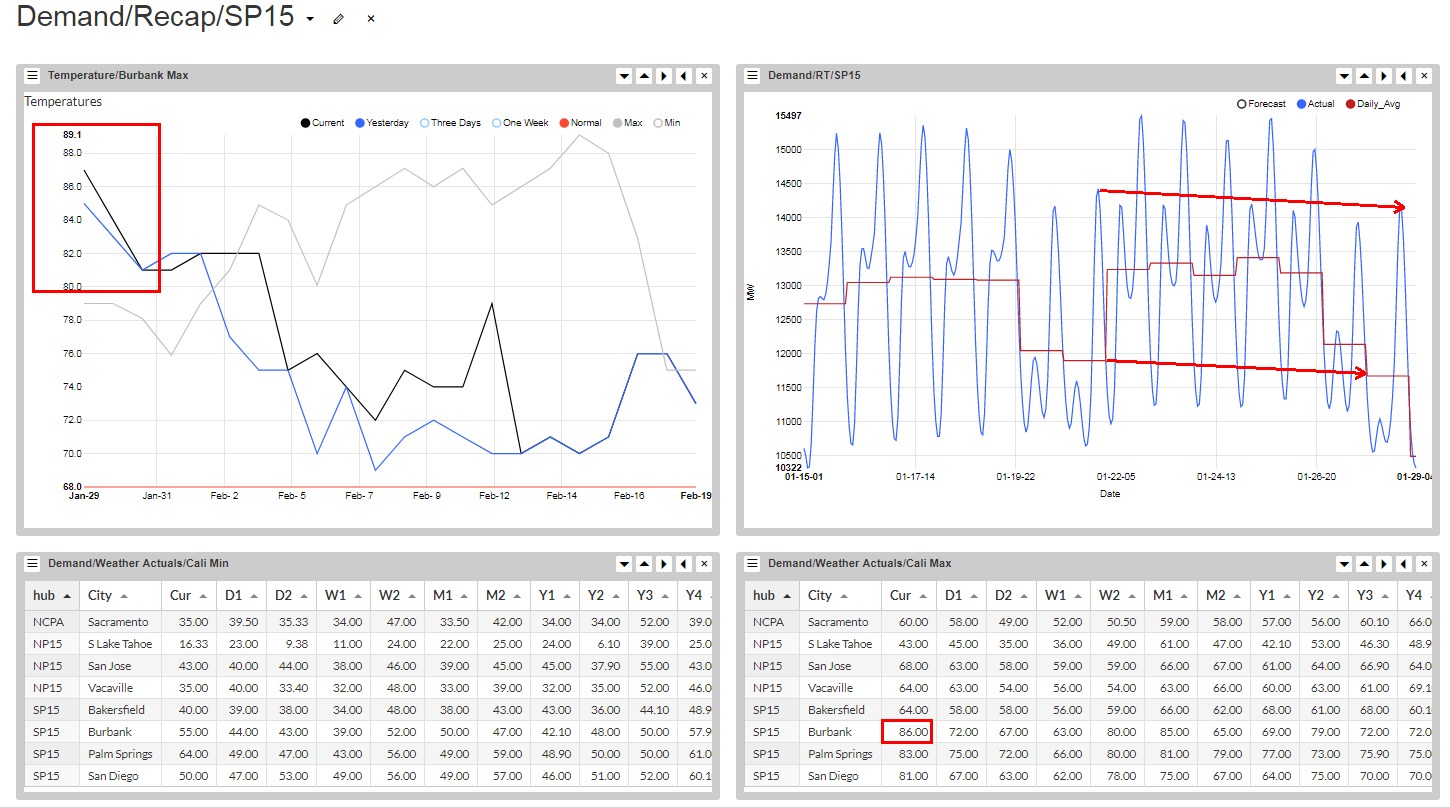 Burbank, too, is setting highs but its loads are just sideways as compared to last week. This isn’t hot, that is in the 90s or 100s, this is just very warm for January, but we think some AC load will arise. 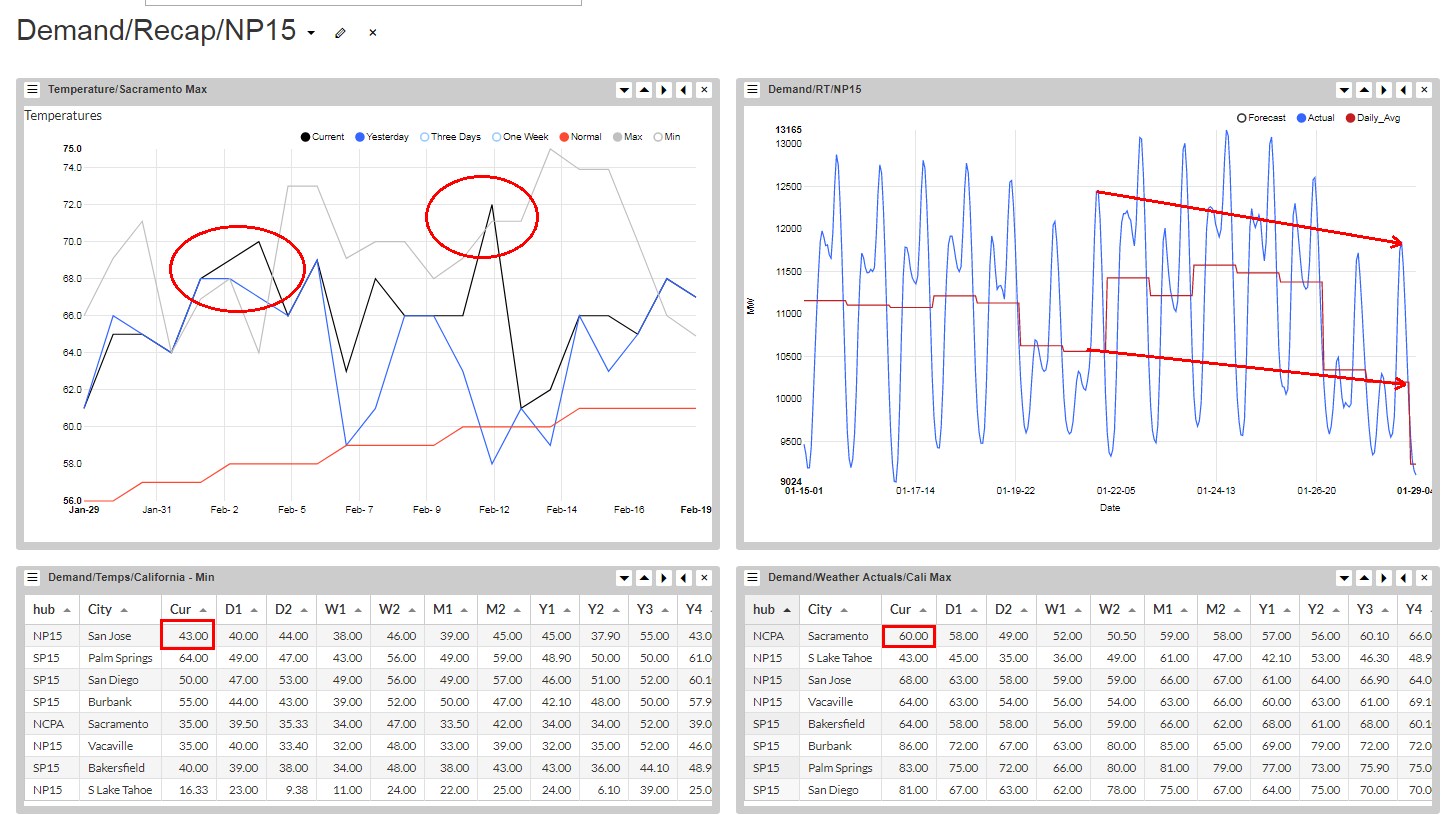 Nocal is warm, but that heat is just bearish as evidenced by the decaying loads. 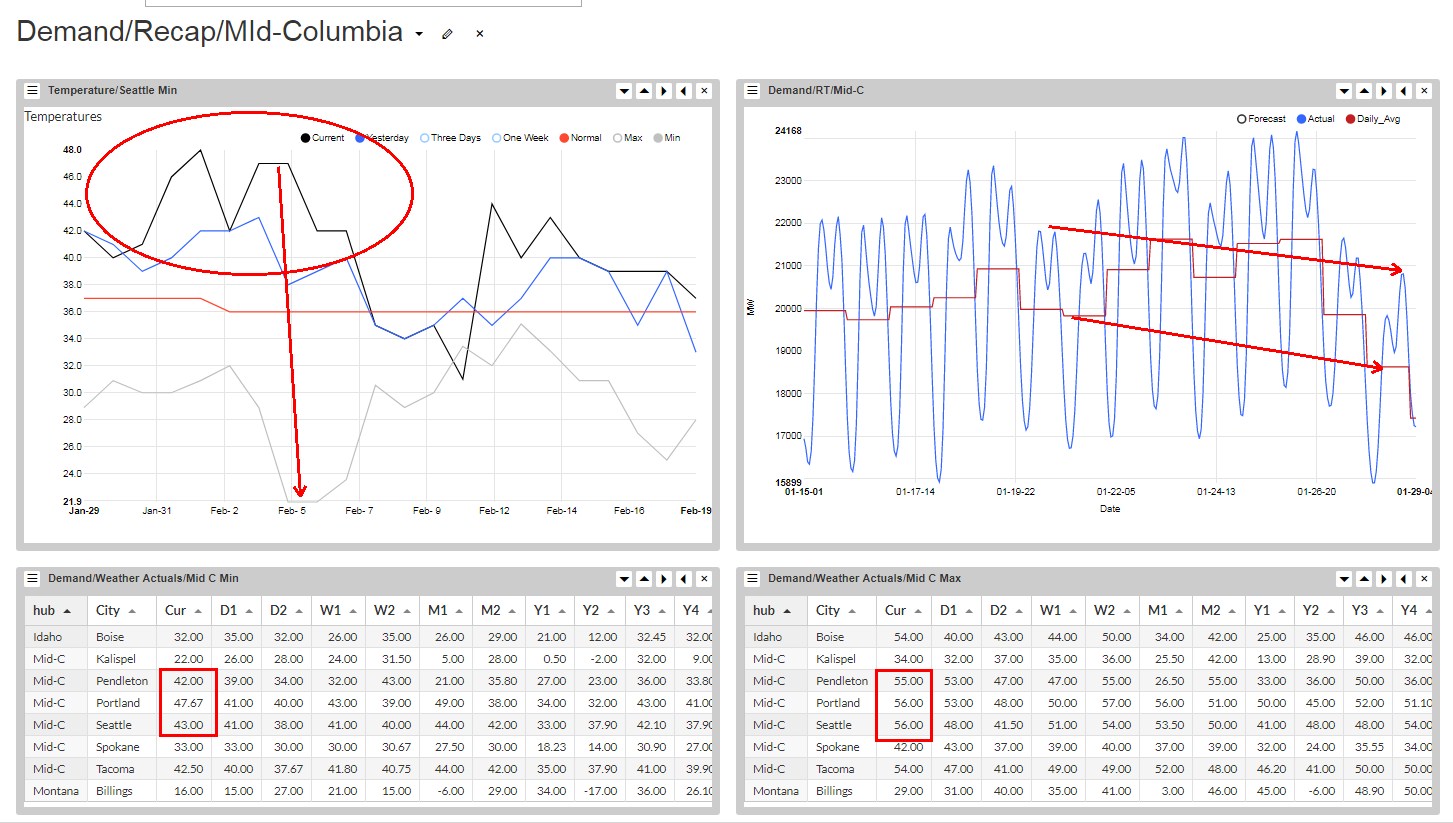 Check out Seattle’s forecasted MIN vs. ten-year low — nearly 30 degrees. Al Gore must be gloating. Loads decayed, rather sharply, and will fall further.

Socal Citygate is quite strong, of late. We got the rally when the TWP outage occurred, but now that has been returned to service, we no longer get the SCG premiums.

Nymex continues its rally, but the west hubs lag. Note the collapse at Socal Citygate while the Nymex roared past. 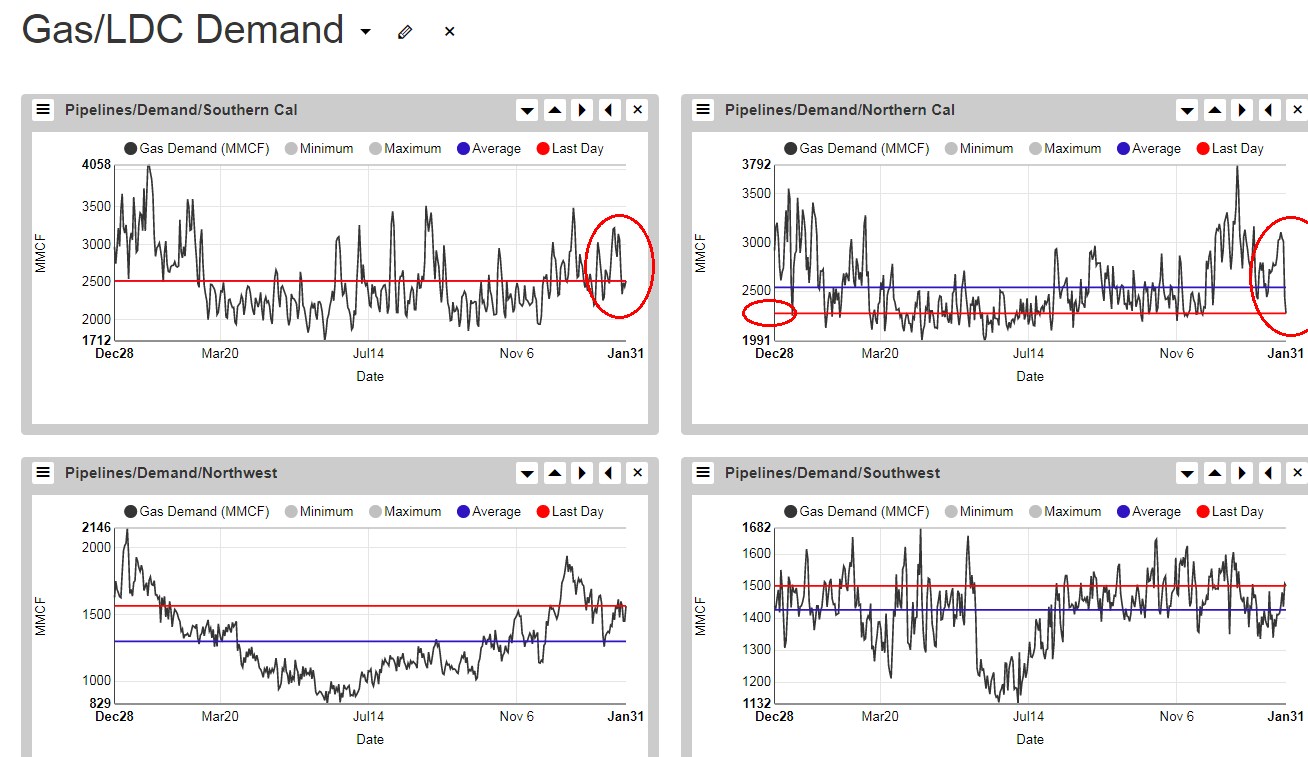 Our LDC gas demand indexes collapsed inside California, off of the warm weather. The Southwest index staged a rally, of sorts.

That warm weather crushed gas demand which forced PG&E and SCG to inject, and its January. No wonder the March forwards are so weak and growing weaker. 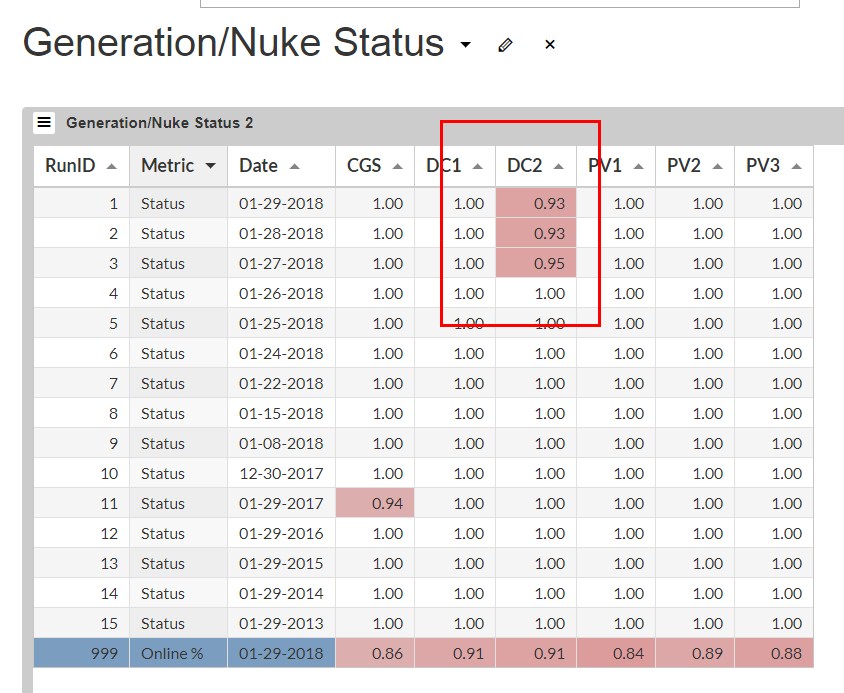 I haven’t said the word “nuke” in one of these blogs for a while; today I can. “NUKE” at Diablo is sputtering, now its down to 93%; not sure what’s going on there. 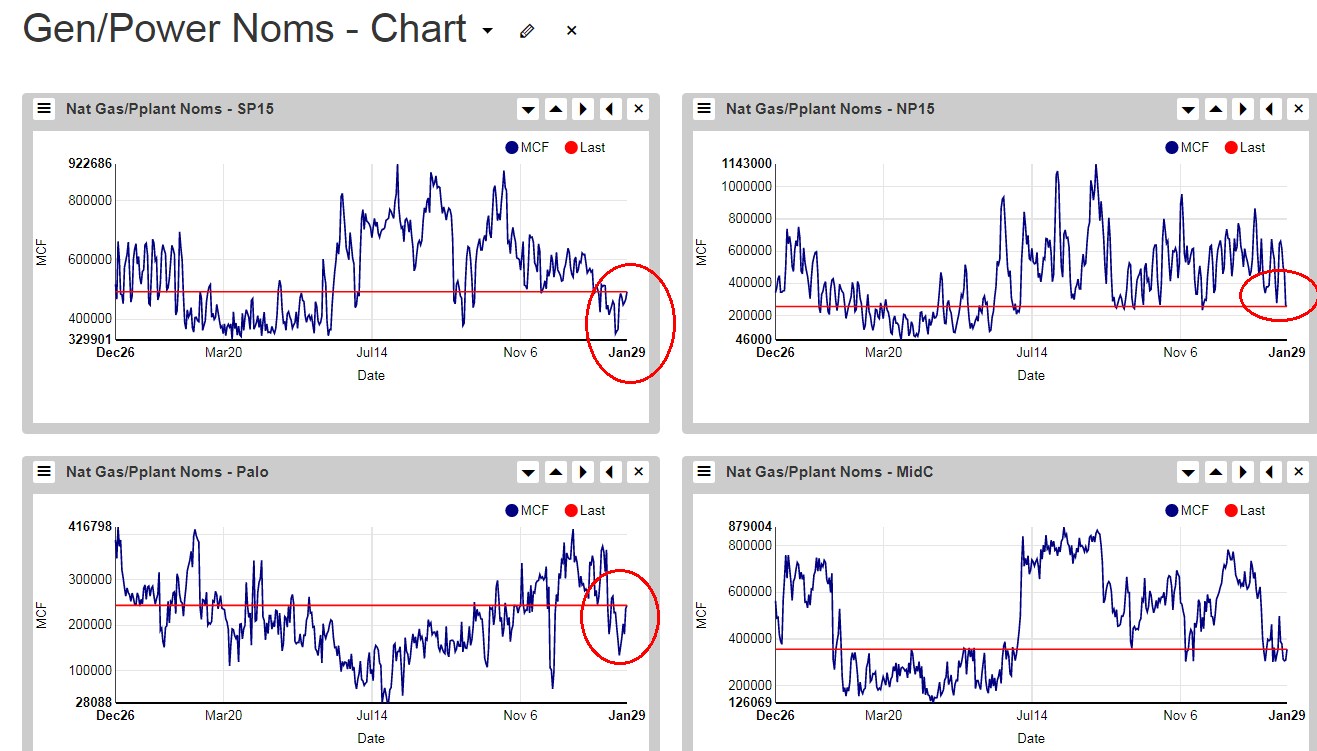 But I know what’s going on here, in gas noms. They are tanking, all approaching calendar year lows. Why wouldn’t they, the weather is like April. 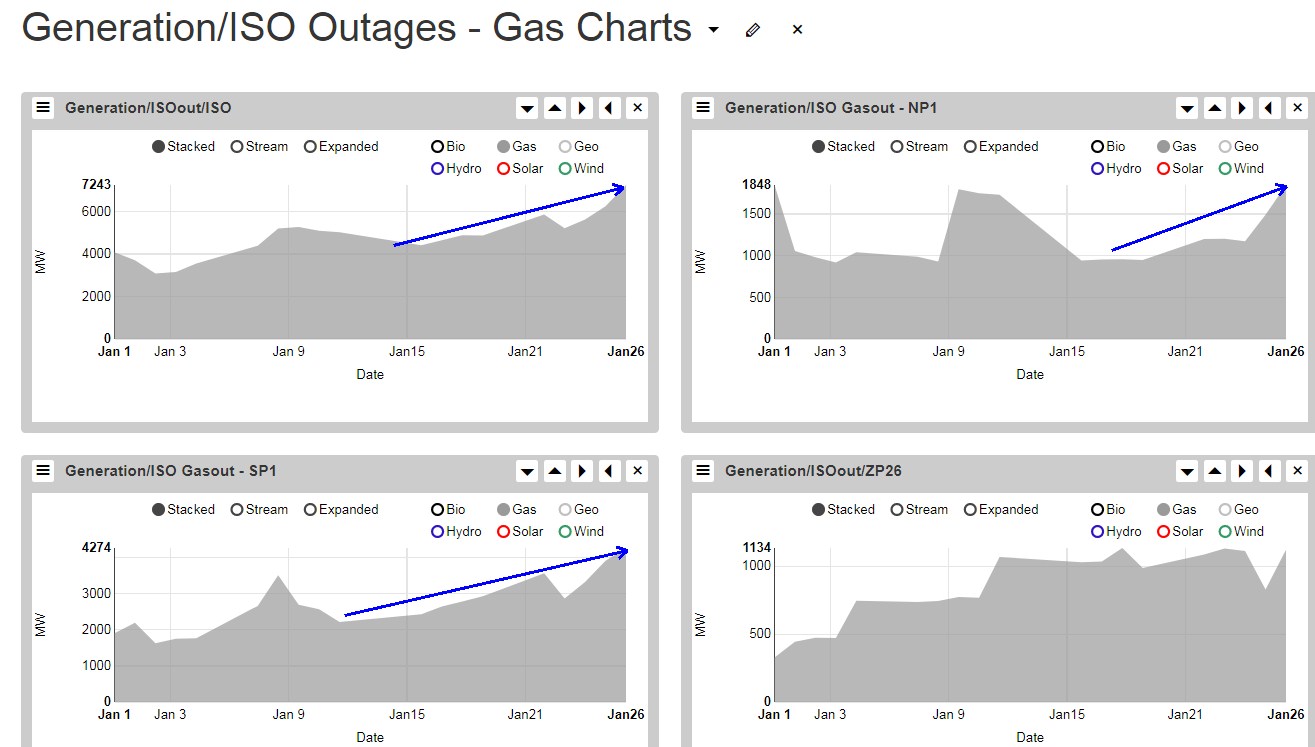 At least planned maintenance is bullish; all three ISO zones are showing an ever-increasing amount of gas plants taken offline. This might become interesting, should LA find some early heat, like in the 90s, with all of this capacity down.

We already said its warm, did we say its dry?

It is so dry in California that we had to go out 20 days to find any rain. 2018 is shaping up to perhaps be one of the Golden State’s dryest years on record. In past draughts, the saying went something like this … “Yellow is mellow; brown is down”; which referred to how you managed your toilette. This year, the saying might be “Yellow is mellow, so is brown.” Wow, how’d you like to live in a place where the govt tells you when to flush your toilette? Forget about watering your lawn, or flowers. Oh, but the cotton farmers will still be irrigating their federally subsidized crop, sucking down that aquifer ever further till one day it’s empty. The silver lining there is that empty aquifer can become the state’s new gas storage facility.

Moving up north, to God’s Country, there is ample rain. The forecast is dryer than last week but is not wet. 2018 is interesting, this is becoming an ever-increasingly big water year, at least on the upper Columbia. Check out Kalispell’s 1″; the show ain’t over, folks.

Those are significant positive anomalies, and almost all the big ones are above Coulee. On another note, we are amidst a re-write of our hydro model, hope to release those results this week. Part of the rewrite fixes a problem with our runoff forecast. We are also switching a key algorithm in that runoff calc; if you’re interested in more details, drop me a note ([email protected]). 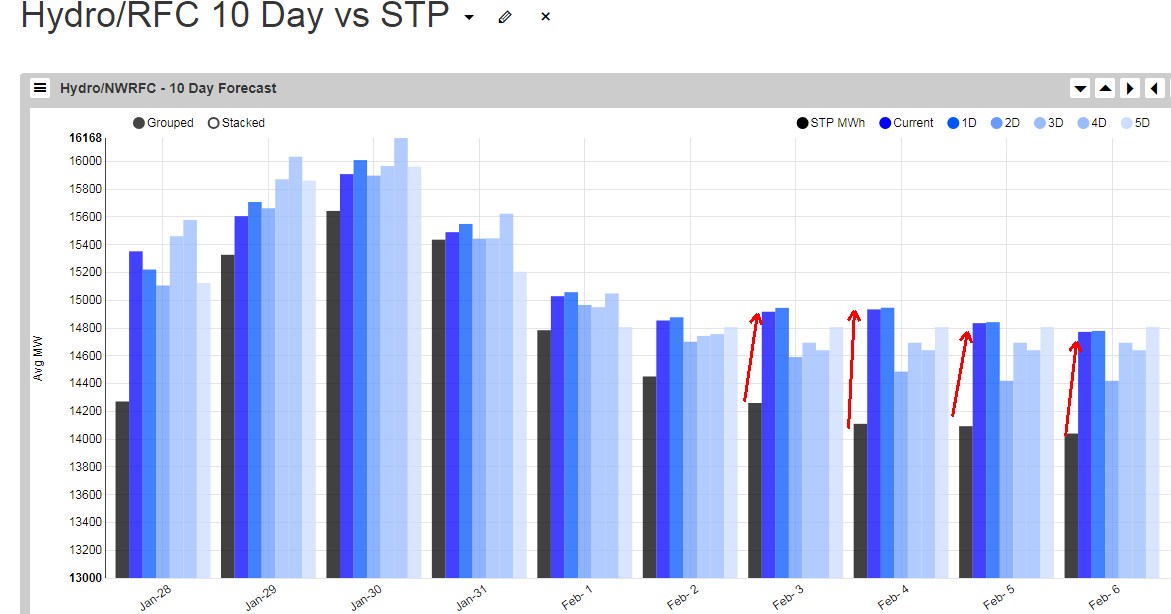 The RFC jacked its ten day up from last Monday’s STP, all of which bodes bearish for today’s STP.

Coulee discharge is off a shade on average daily water, was up on its peak, and way down on its min. The reservoir is just sideways and, as we approach Feb’s flood control in two weeks, we are expecting a deeper draft in April. Maybe we’ll see something in the 1230s?

BC yawned its way through the weekend, neither exporting or importing much. The DC hits TTC with increasingly regularity and nothing to report inside CA.

We are very bearish in the north and growing somewhat bullish in the south off of record-setting heat. Its way too early for demand to respond much, but it is warm enough to fire up some ACs. It’s also warm enough in the Northwest to shutter some heaters.